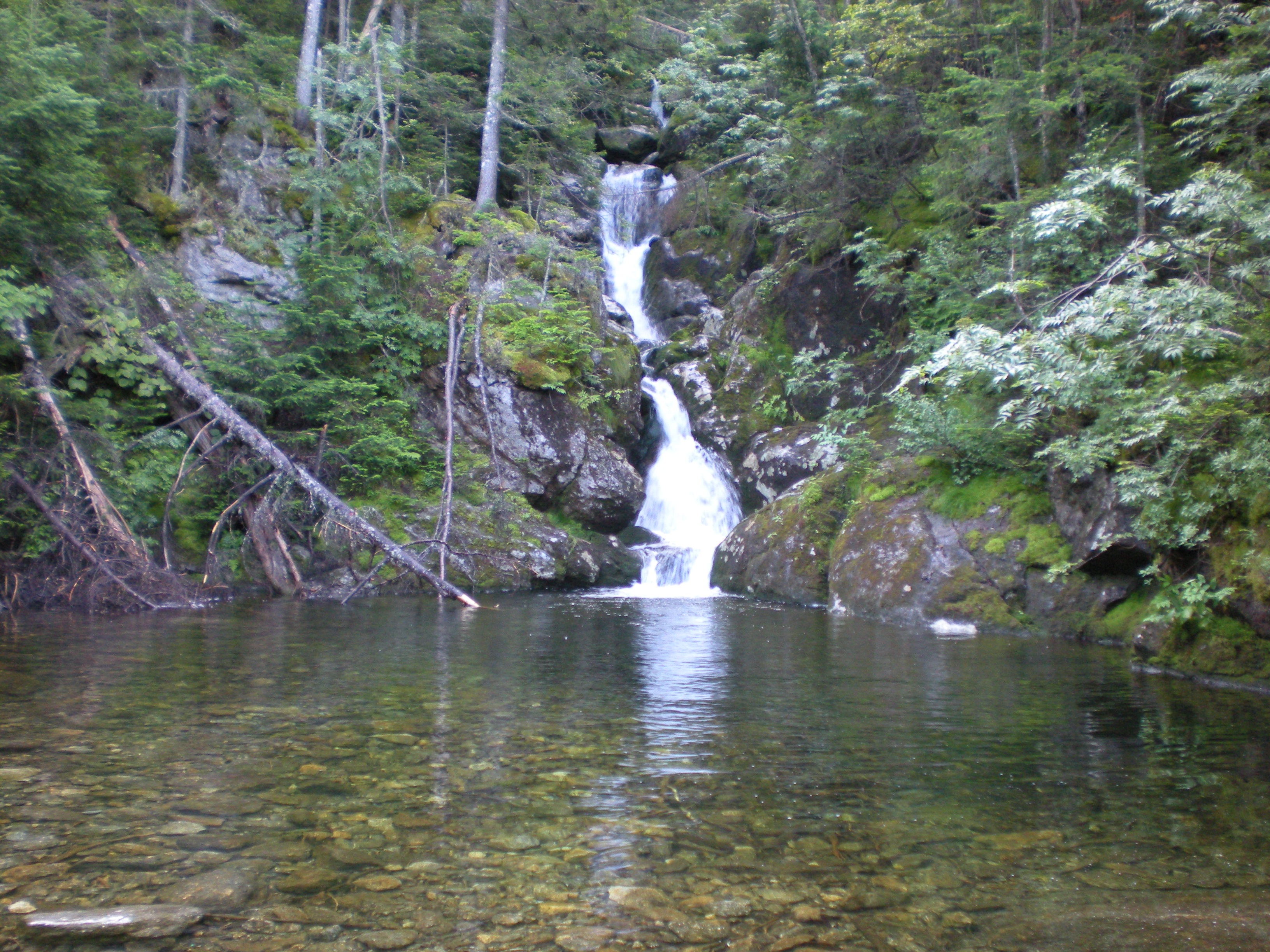 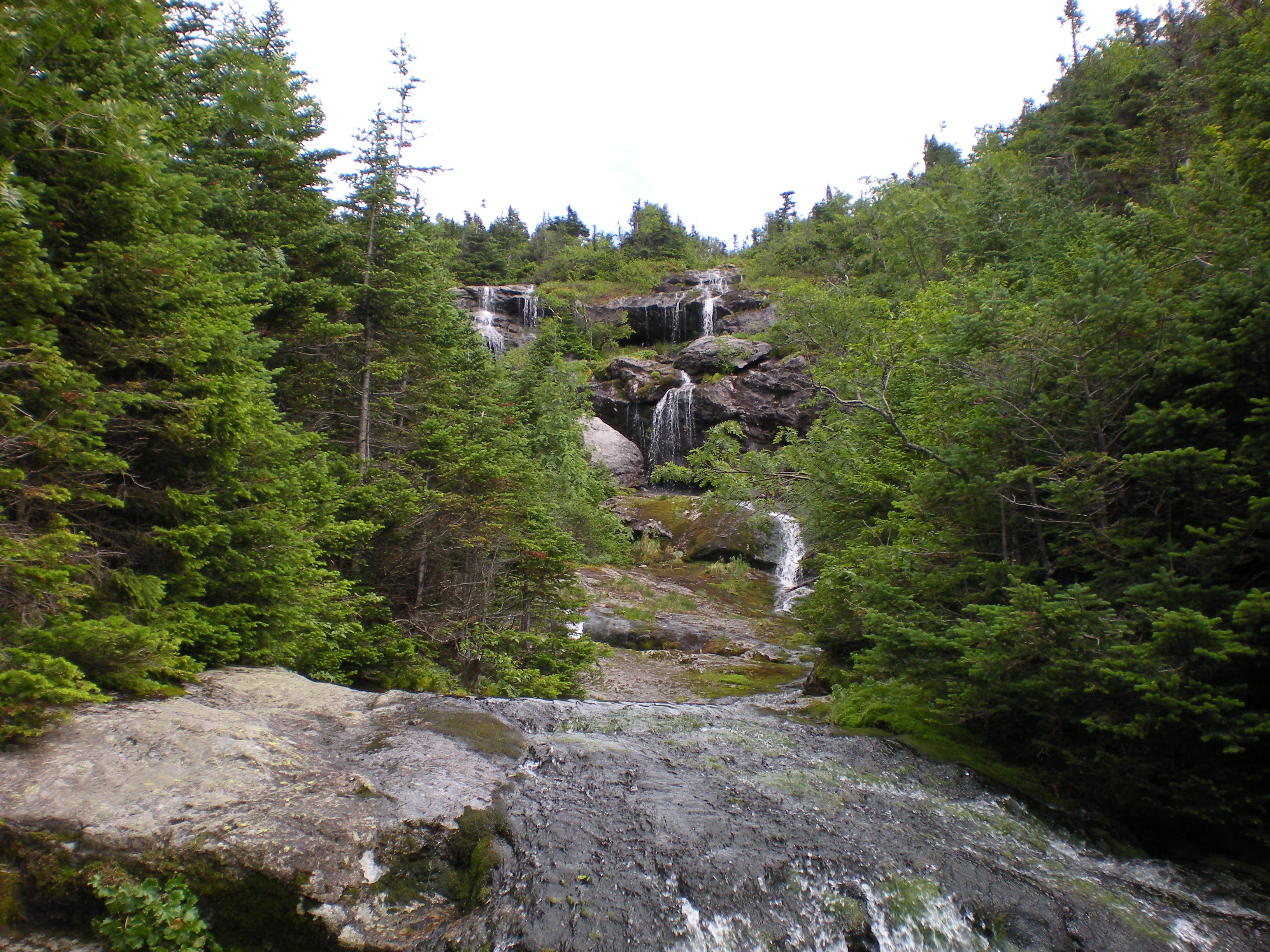 Chuck Redepenning was visiting this week-end and wanted to climb Mt. Washington from the west side, so we went with Peter Wyatt up the Ammonoosuc Ravine Trail. Peter and I had already done that trail once this season (see West-East Mt. Washington Traverse) but it's a beautiful trail so we were happy to do it again on such a fine day. The views start at the Gem Pool (left) followed by a steep climb up the cascade (right) with increasing views from the ledges as you get above the cascade. 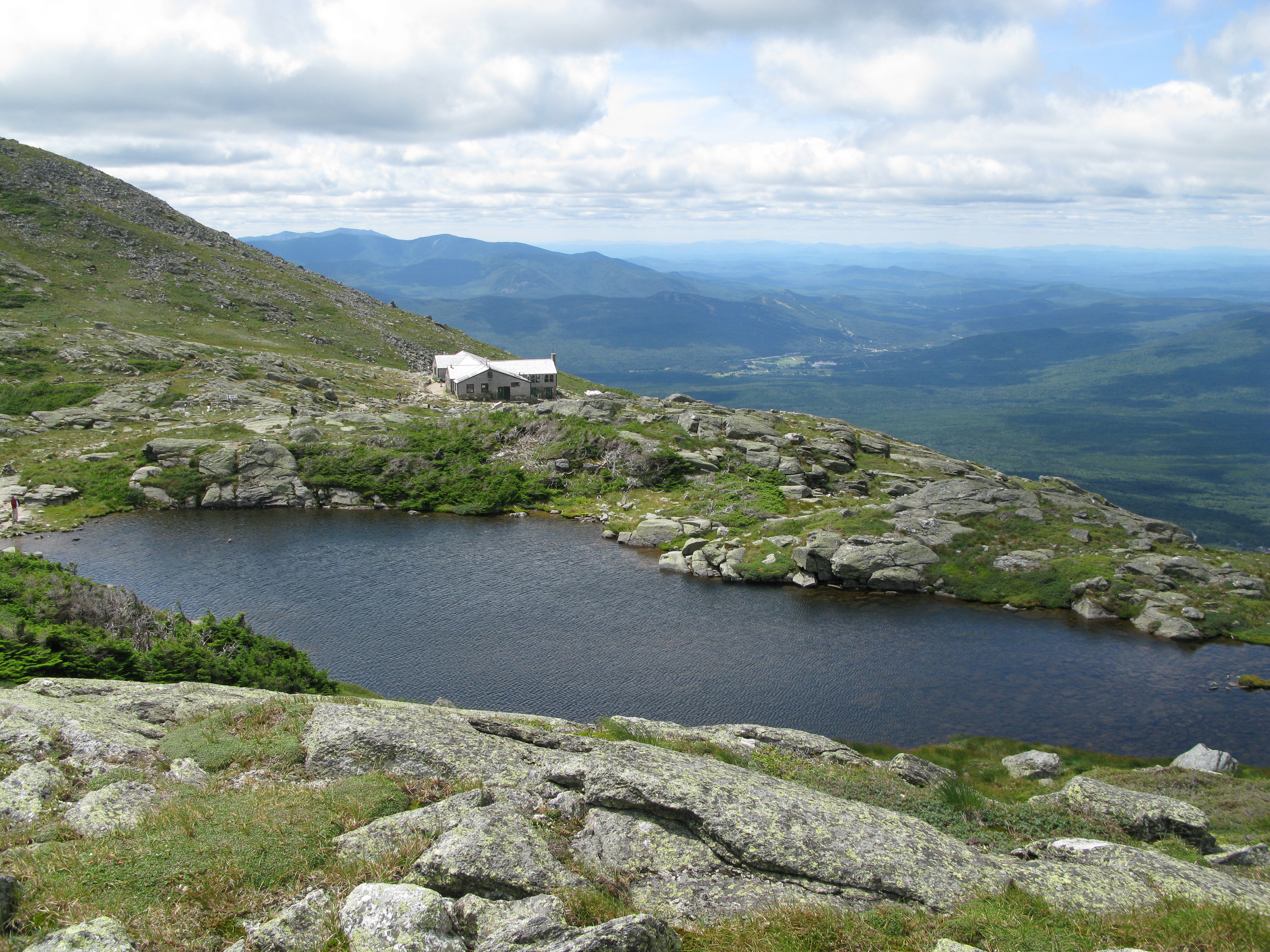 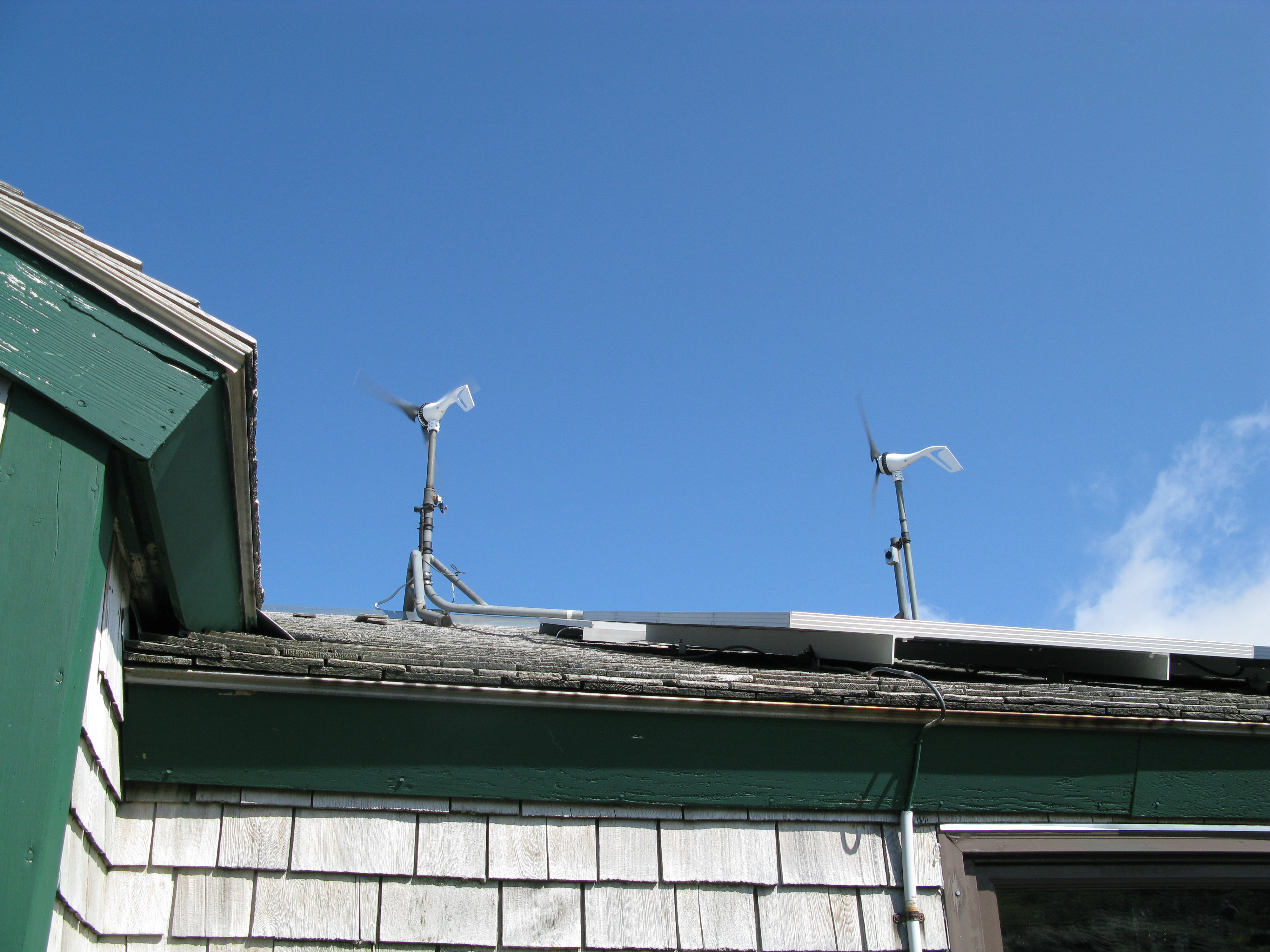 The trail rises above treeline just before you get to Lake of the Clouds hut. From the hut, the Bretton Woods ski area looks very small and far below (left). The wind was whipping (40 mph - my guess) and the two anemometers on top of the hut were happily buzzing. 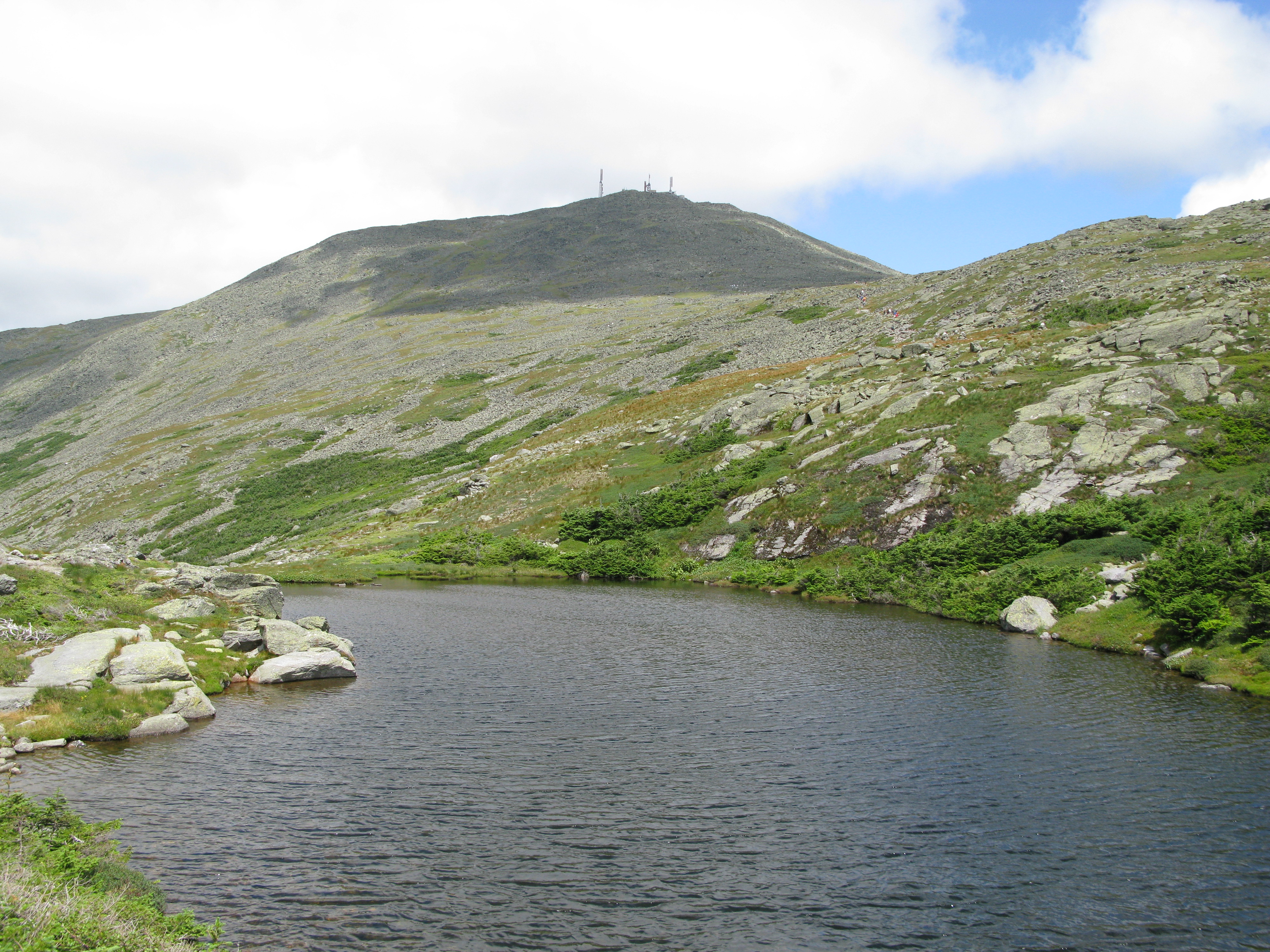 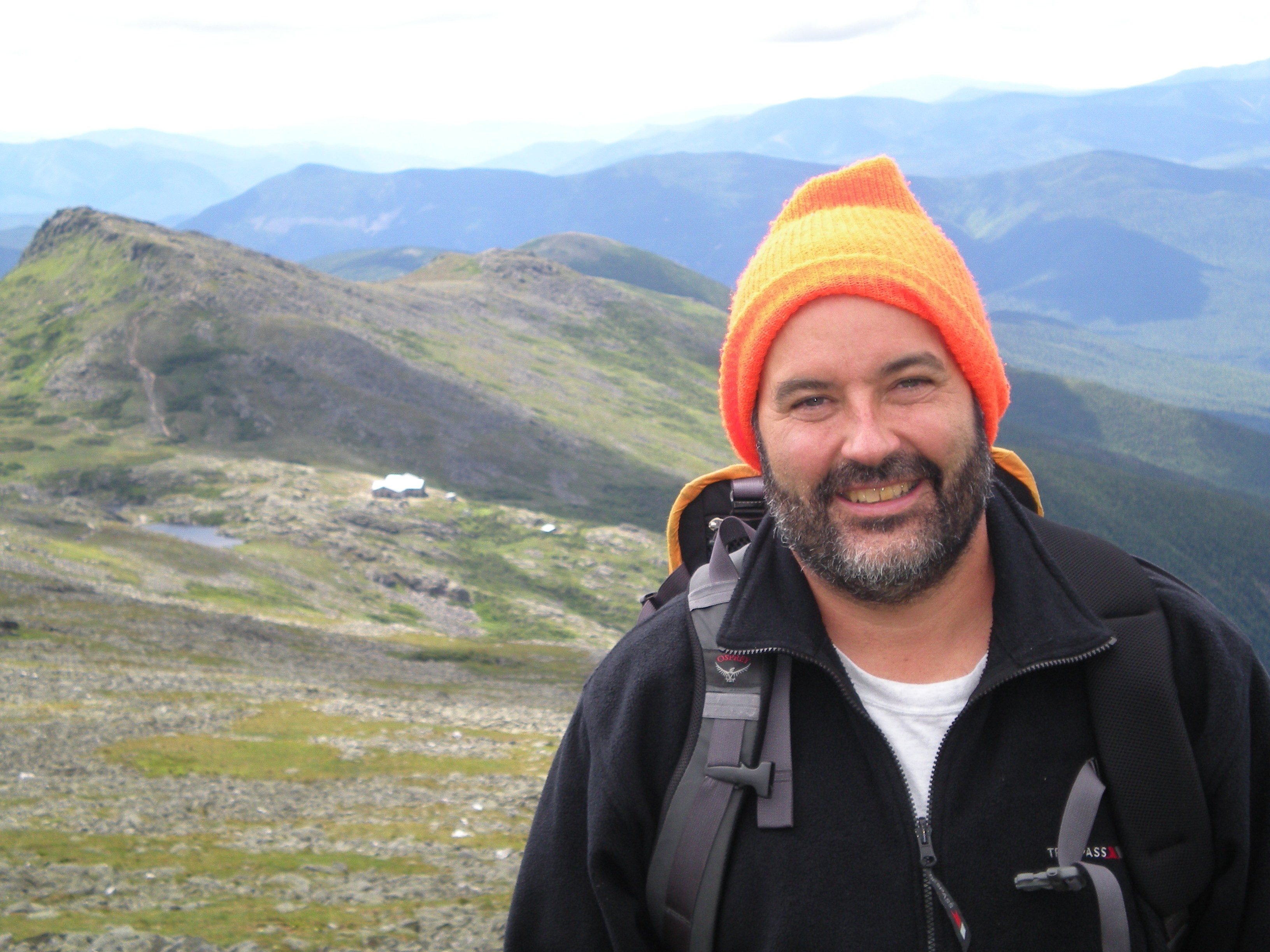 From the hut it's a relatively easy climb to Mt. Washington by the Crawford Path (left) with beautiful views of the southern Presidentials (right). Even though it wasn't that cold we had all our layers, gloves, and hats on because of the wind - never leave without them when you go above treeline! 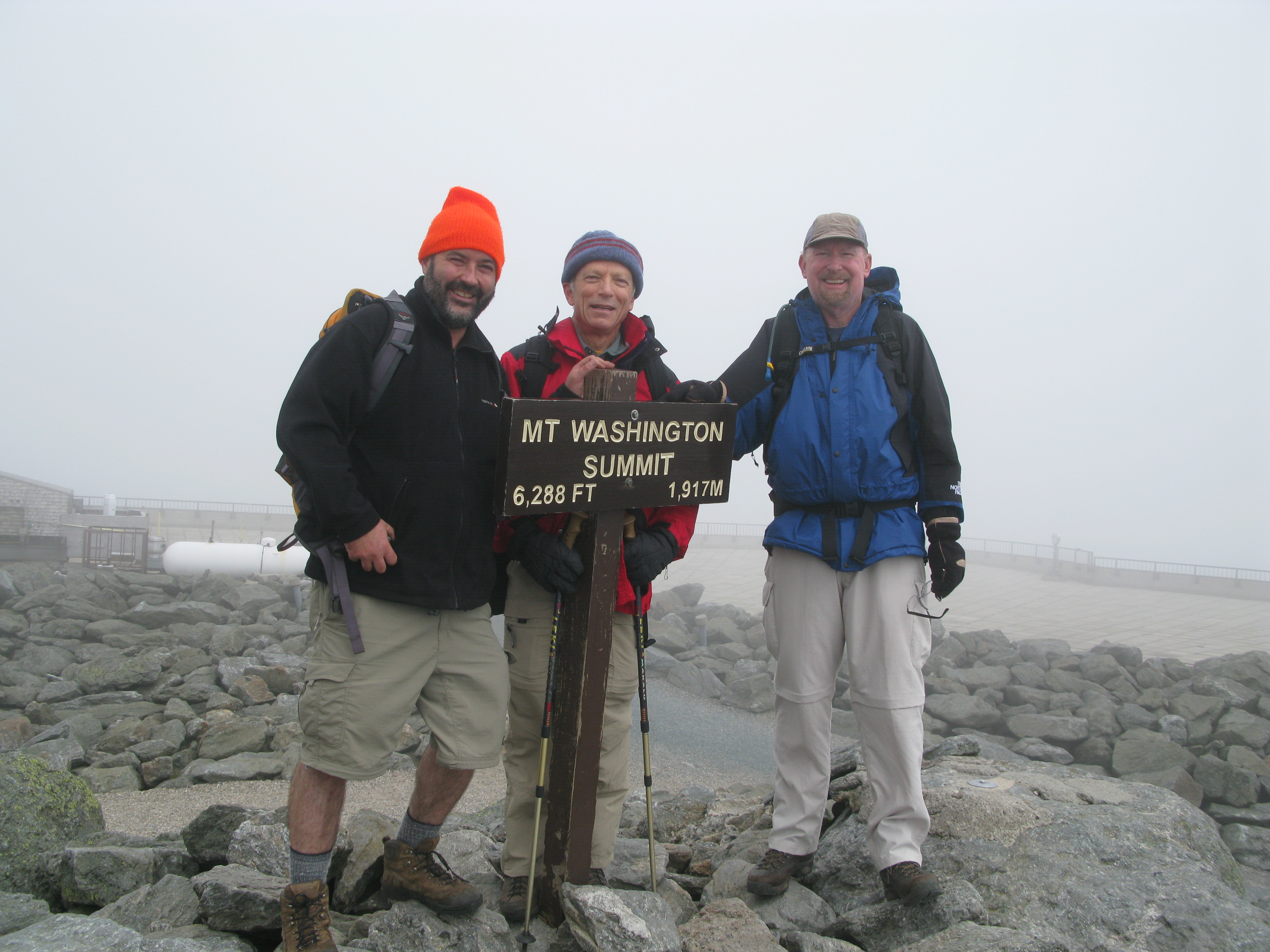 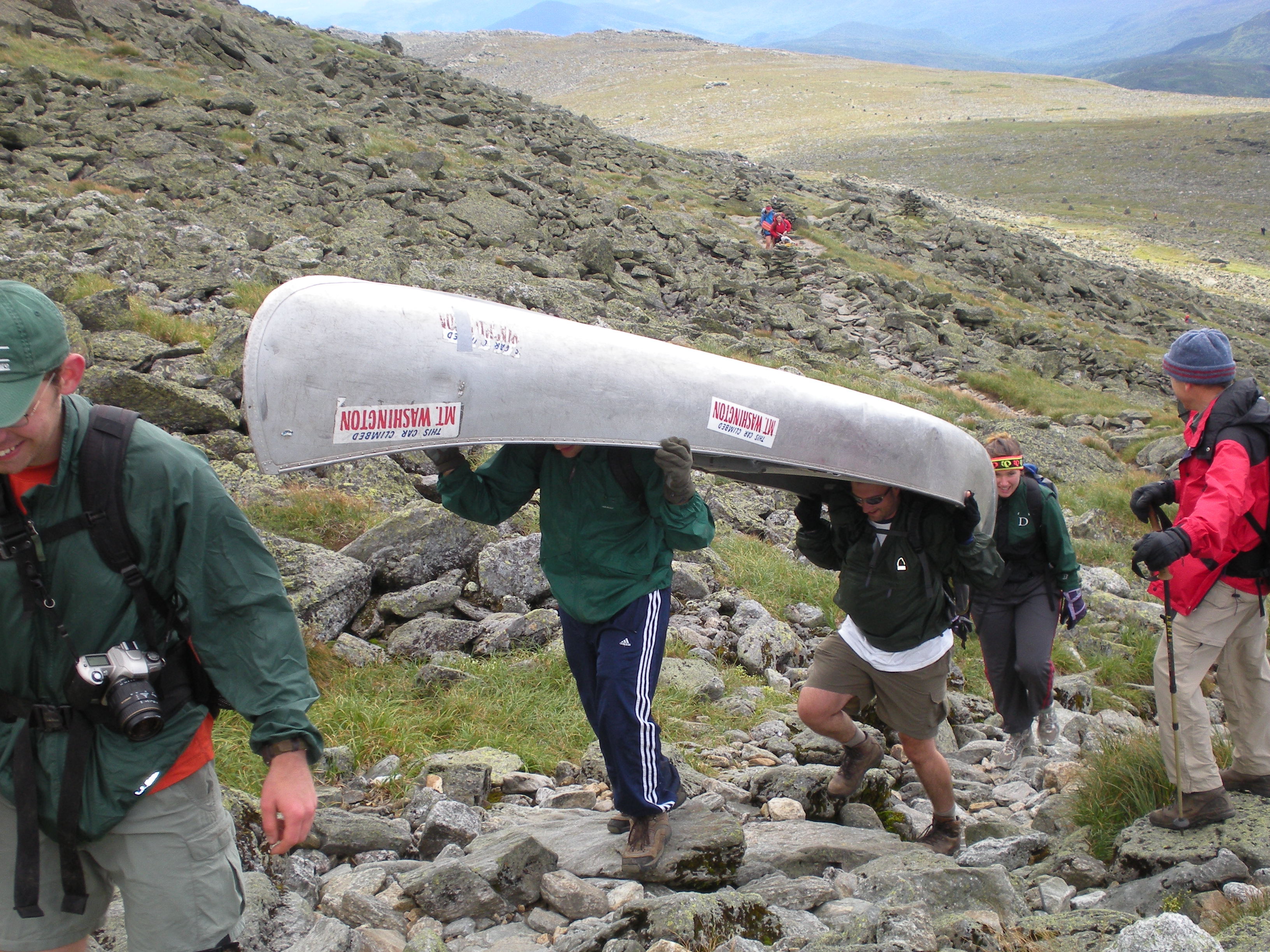 We got to the top of Mt. Washington and all of a sudden were in the middle of a crazy circus, with clueless folks in shorts and T-shirts discharged from the Cog Railway, totally unprepared for the weather and freezing their fannies off. We took the obligatory photo at the top (at left; Peter is in center, Chuck at right) and repaired to the visitors' center for our traditional cup of coffee. Proceeding back down we ran across a group of college kids carrying a canoe to the top. "A tradition", they explained to us. "Where are your lifejackets?", I asked back because I'm so witty. A heavy aluminum canoe, it was. I'm all for respecting tradition, but they could also chosen a lighter model. 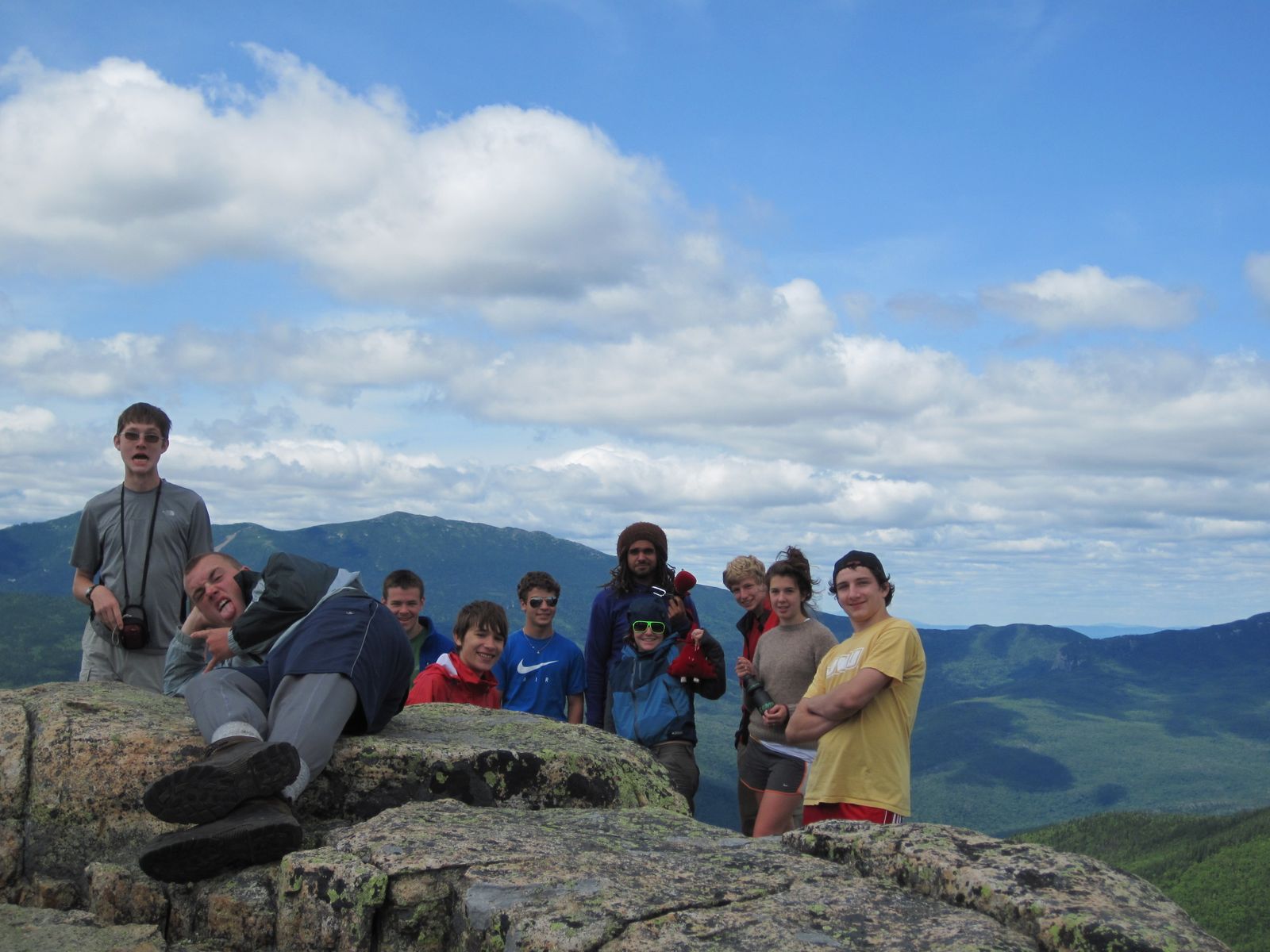 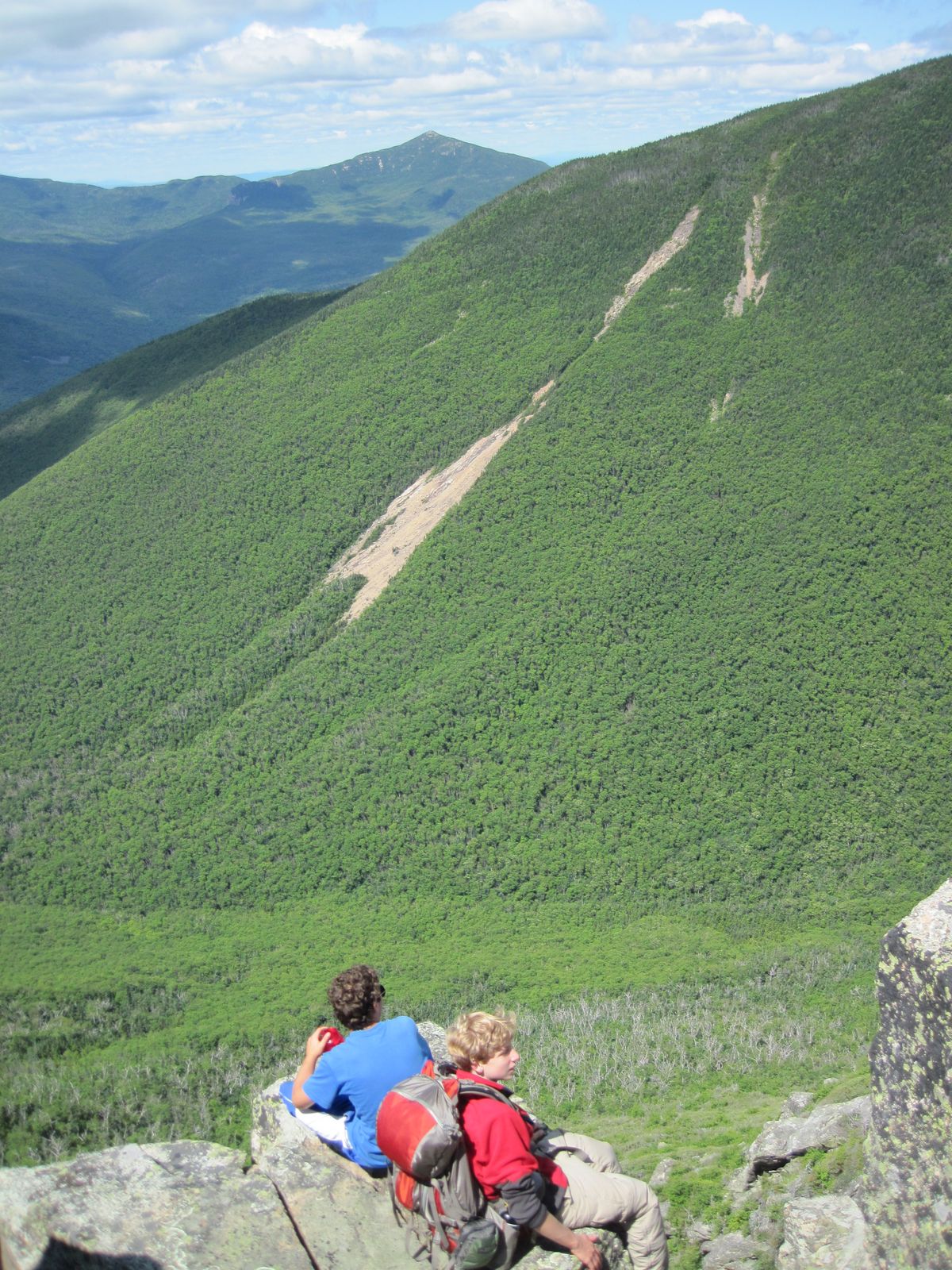 Through the day I thought about my son Alex, who was out somewhere in the Pemi Wilderness nearby on a 10-day AMC peak-bagging backpacking trip. Turns out that he was doing the Bonds and Bondcliff on that day - what a day to take in the Bondcliff panorama! Here he is (in blue T-shirt) with his group at the top of Bond (left) and Bondcliff (right). He told me that Bondcliff was covered with blueberries. What a good mountain kid he is - he makes his father proud.