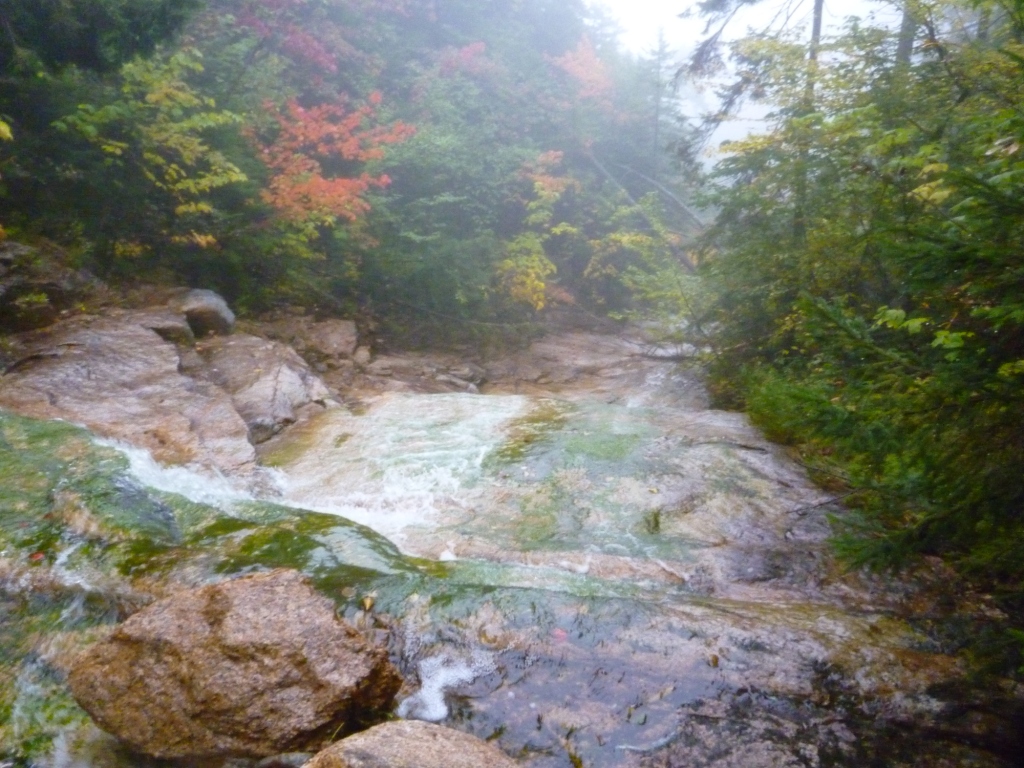 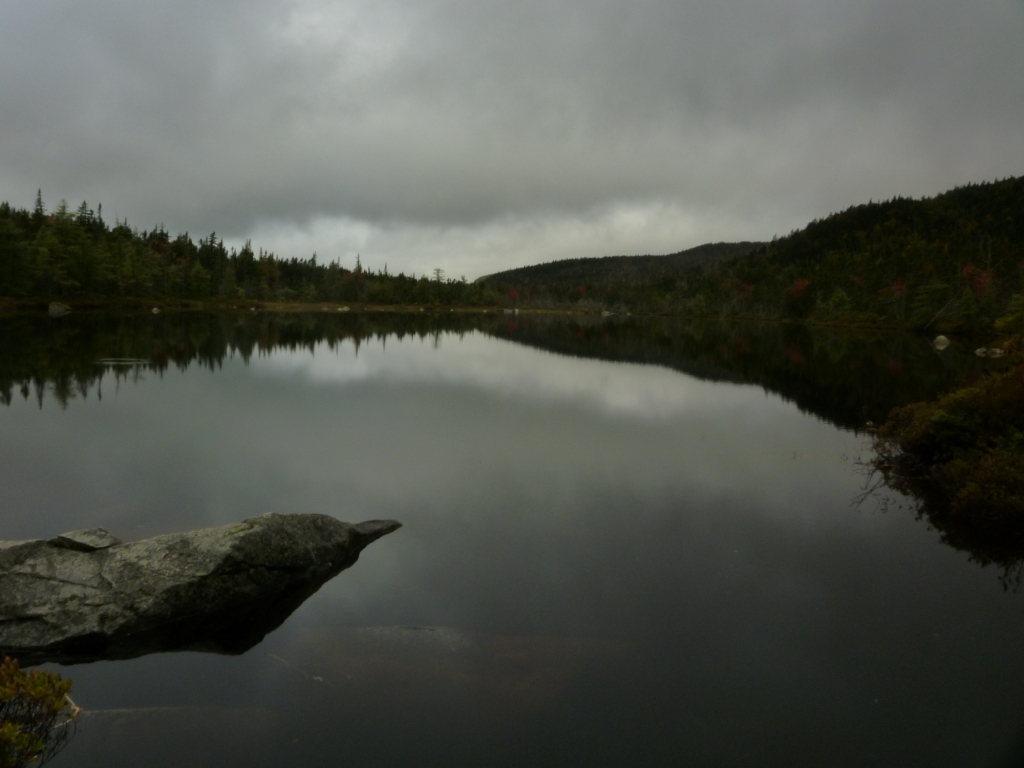 Low clouds shrouding the summits called for a low-elevation hike on that day. Peter Wyatt and I had planned to go up the Dry River and do a loop over Mt. Webster but when we got to the Dry River trailhead we found that the trail was closed - the hurricane flooding on August 28 must have caused serious damage. So we resorted to Plan B, which was to hike around the Willey Range all the way to Zealand. Peter's wife Nancy dropped us in fog at the Willey House and from there we climbed up the Keldron Flume Trail, which took us by Keldron Flume (left) to eventually reach the Ethan Pond Trail that we would follow all the way to Zealand Pond. We climbed to the height of land at 2,850' and then dropped behind the Willey Range, our first stop being Ethan Pond (right). By then the fog had cleared but the low clouds would persist for the day. 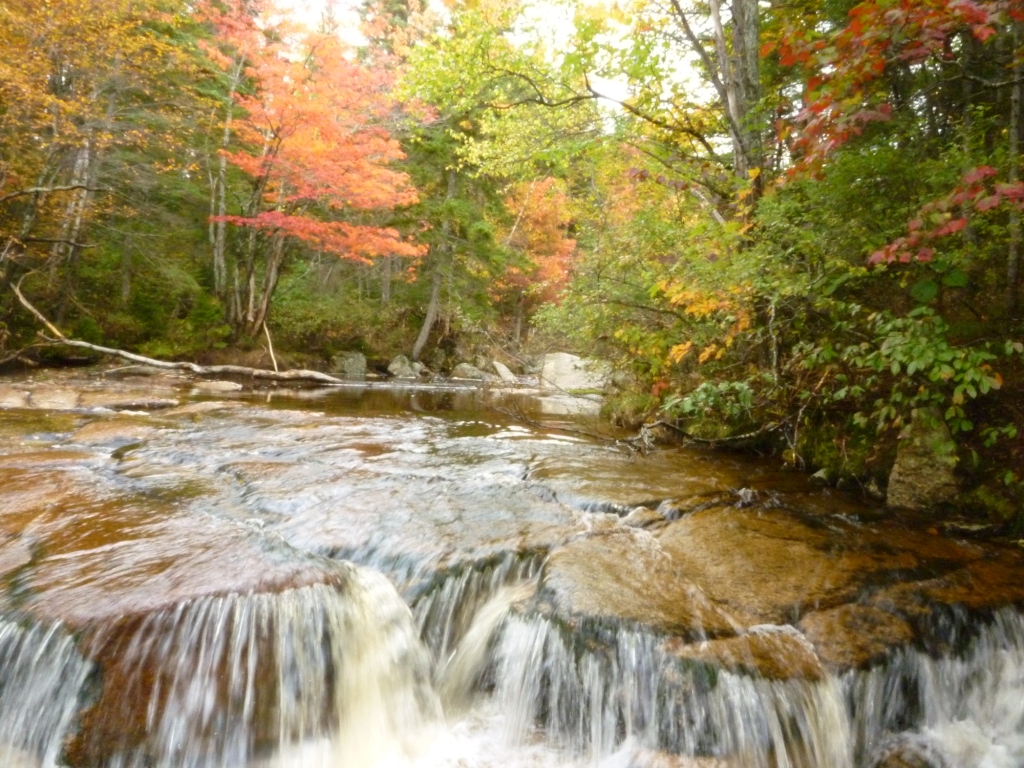 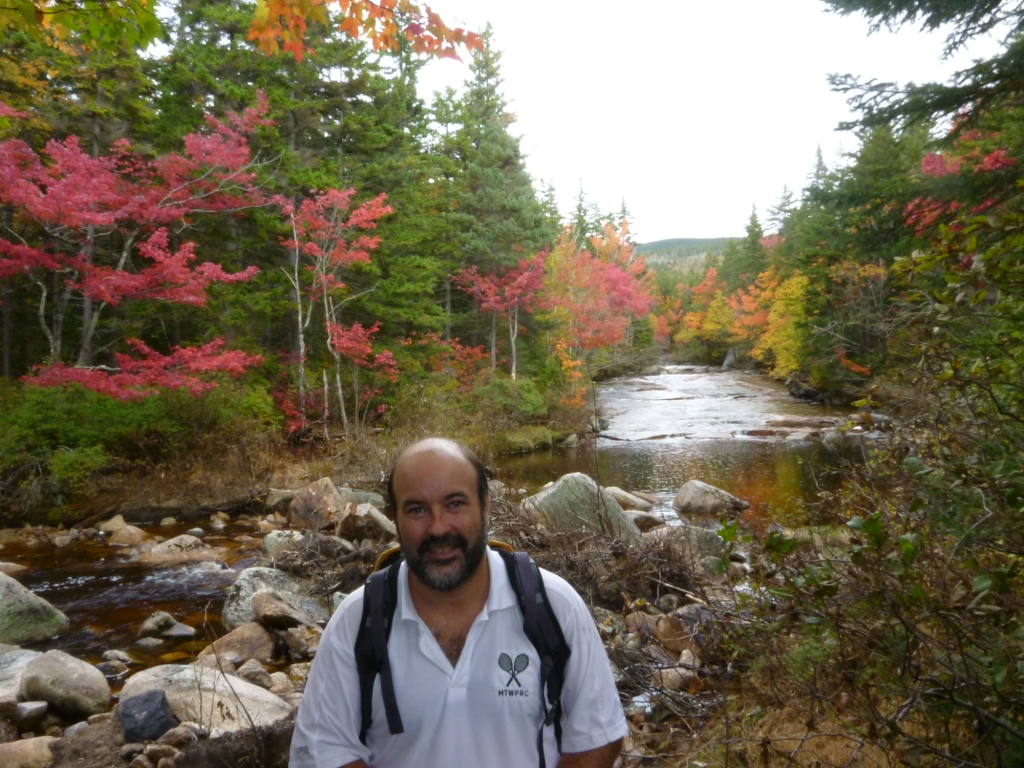 Ethan Pond Trail is part of the Appalachian Trail but we saw no through-hikers - hardly any people, in fact. This was a sharp contrast to our Liberty-Flume Loop hike three weeks ago where we had seen a procession of through-hikers getting back on the AT after having been sidelined by the hurricane. From Ethan Pond we followed the North Folk of the the Pemigewasset River with beautiful early foliage (left and right). 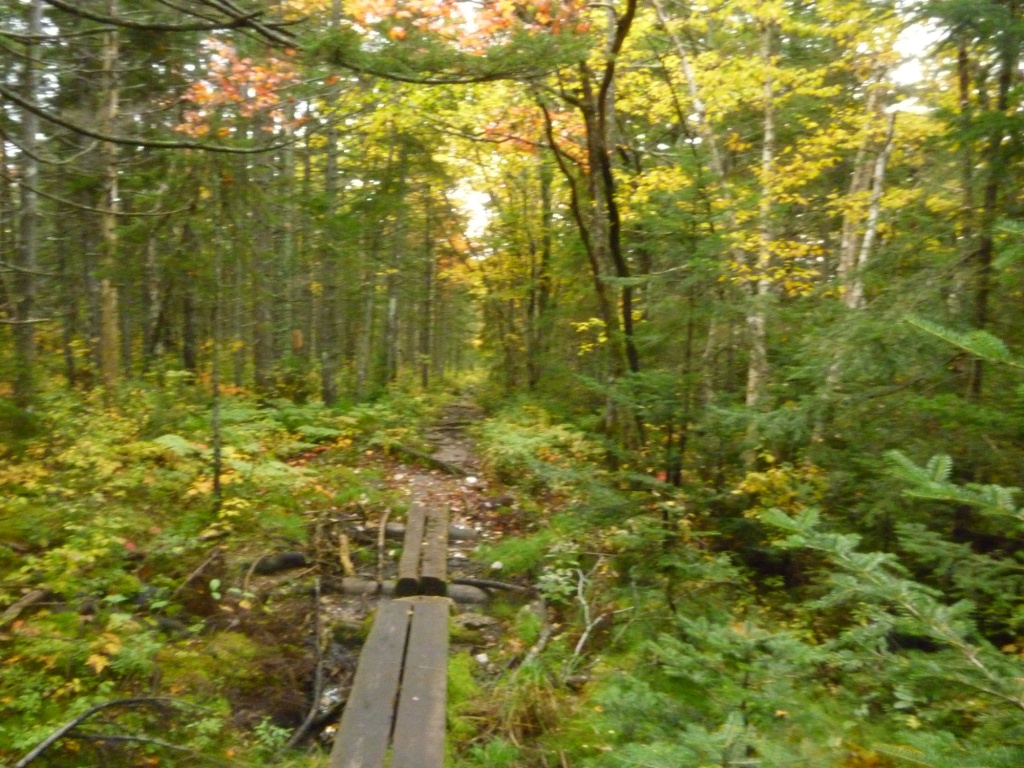 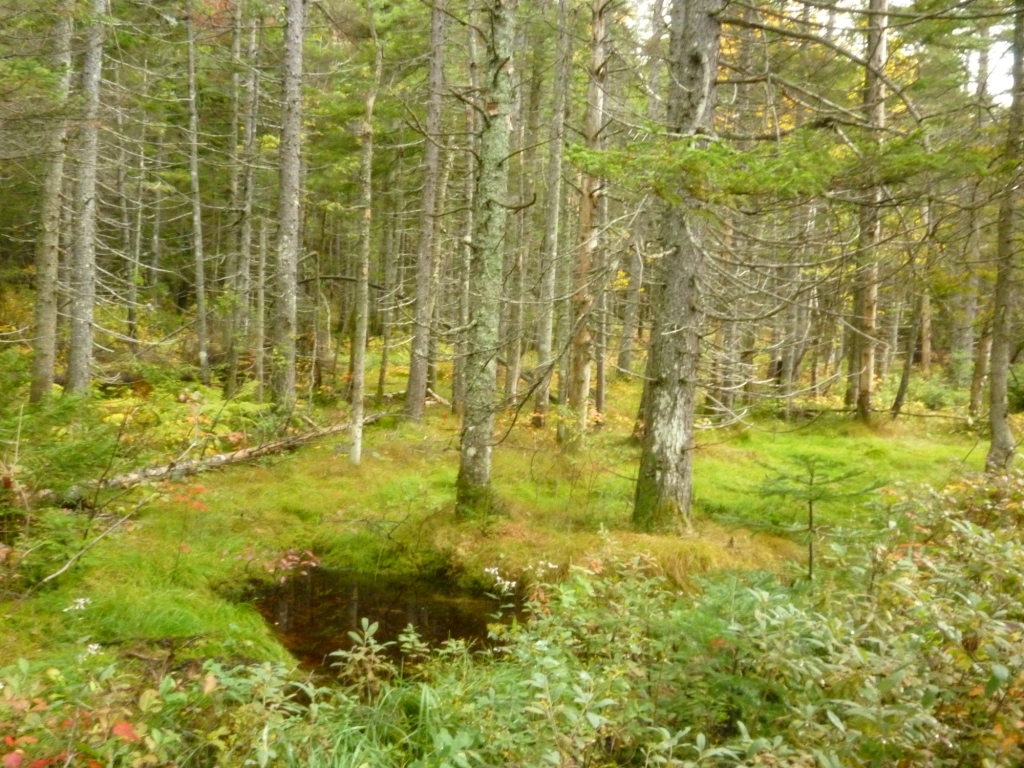 After a few miles we got to the intersection with the Shoal Pond Trail, and detoured by that trail for 0.7 miles to visit Shoal Pond. This was again a very flat trail through open forest (right). It was very muddy, even though there had not been that much rain recently; Peter Gordon explained to me later that this may be because the trees had stopped pumping water, which makes sense. Ethan Pond Trail was also muddy but since it's part of the AT there were a lot of boardwalks (left). Not so on the Shoal Pond Trail which is in the Pemi Wilderness where the customary sign says, "expect primitive conditions with rough trails that may be difficult to follow". At one point on the trail I sank in the mud with both feet up to my knees (below left). My boots went slosh-slosh for the rest of the day. 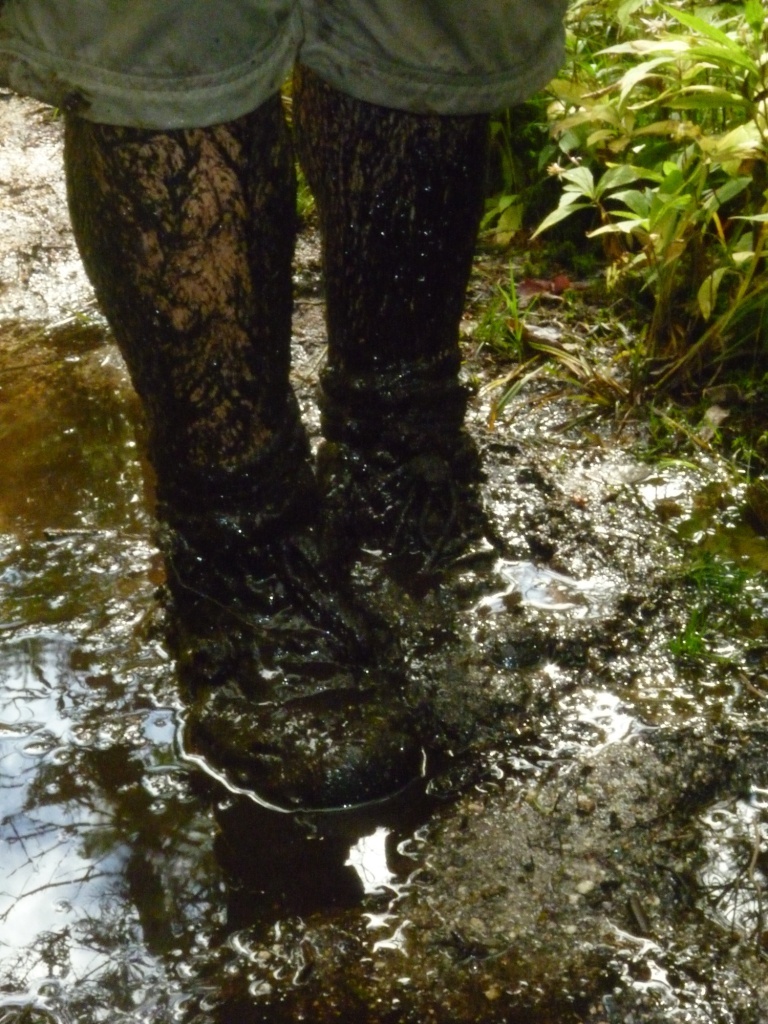 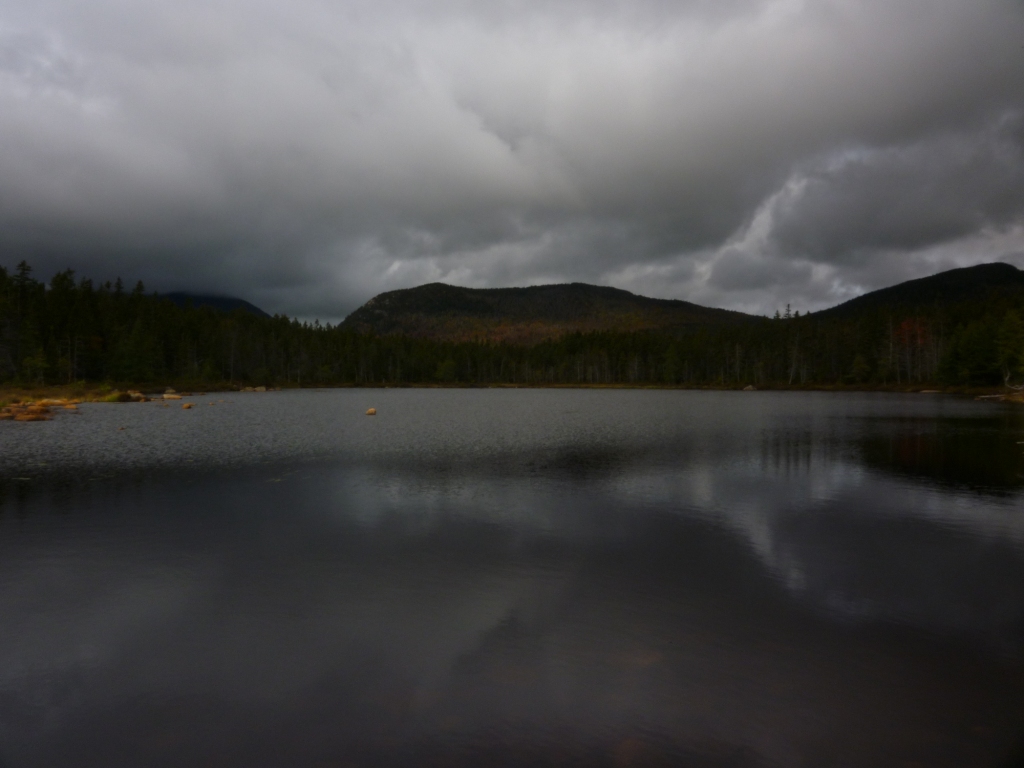 In this manner we reached Shoal Pond, which is of comparable size to Ethan Pond but more swampy around its edges so it has less of a 'mountain pond' feel. It offers a nice view of Zealand Notch (right). We sat on some rocks for lunch at the head of the pond and it was downright warm - in the 70s. There were even some bugs out. 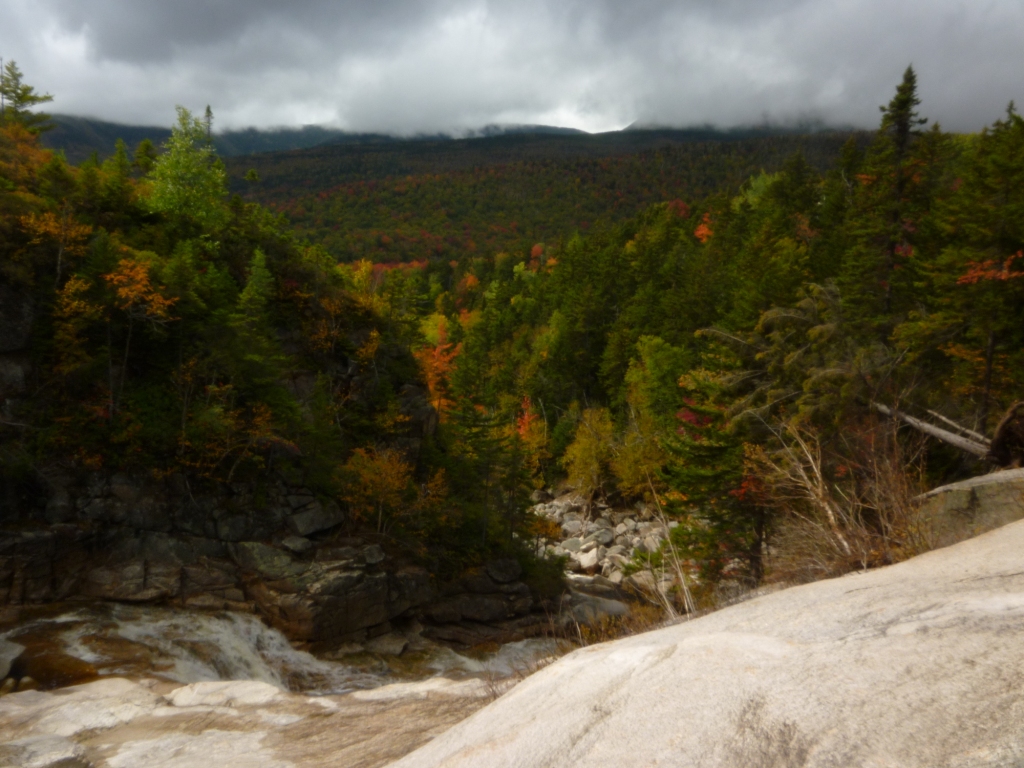 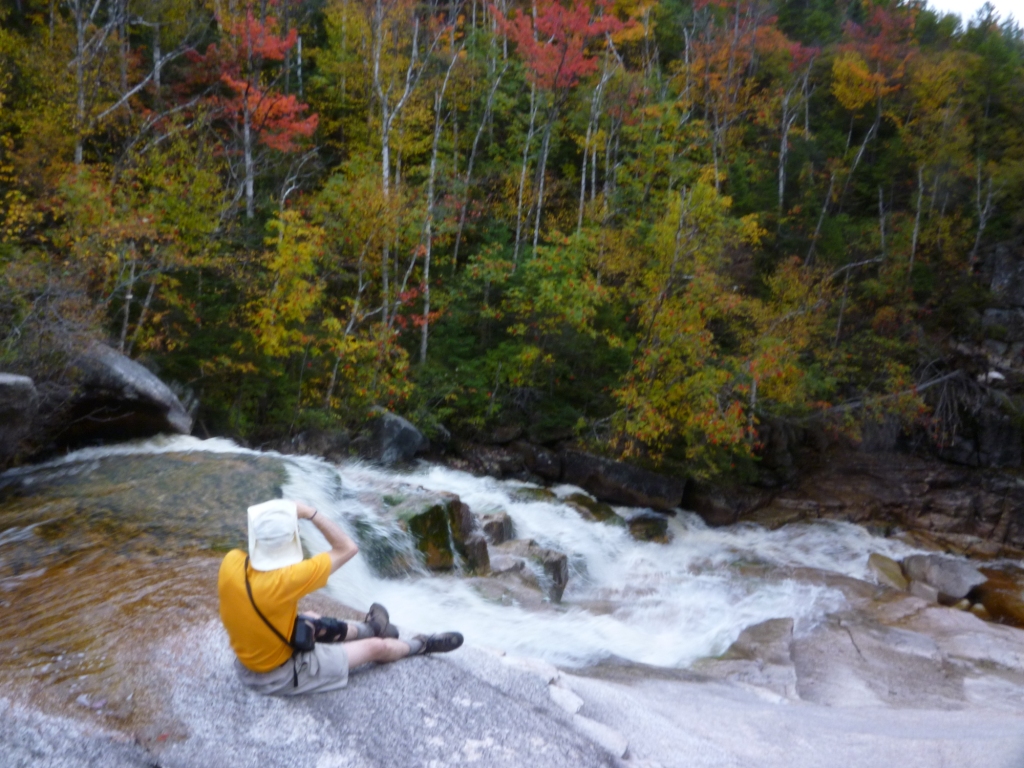 We hiked back to the Ethan Pond Trail and our next stop was Thoreau Falls (left). The Falls were full of water - again probably because the trees had stopped pumping. For all his many years of rambling the White Mountains, Peter had never been to Thoreau Falls and could not say enough about how impressed he was (right), calling them "the most beautiful falls in the White Mountains" and I would agree with him on that. First, they make a spectacular drop. Second, you view them from the top, which allows to take a mountain panorama of the Bonds as well as the Falls. Third, the river above the Falls flows over a series of attractive ledges which add to the open feel. I walked upstream a bit on these ledges and found pools that would be great on a hot summer day. 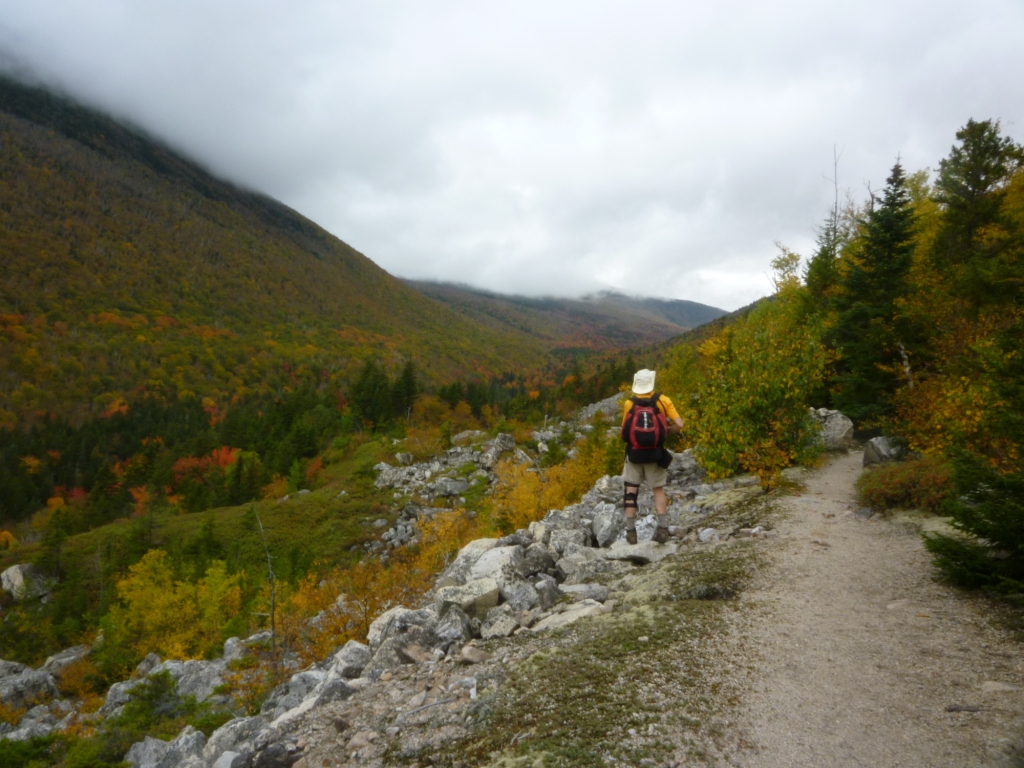 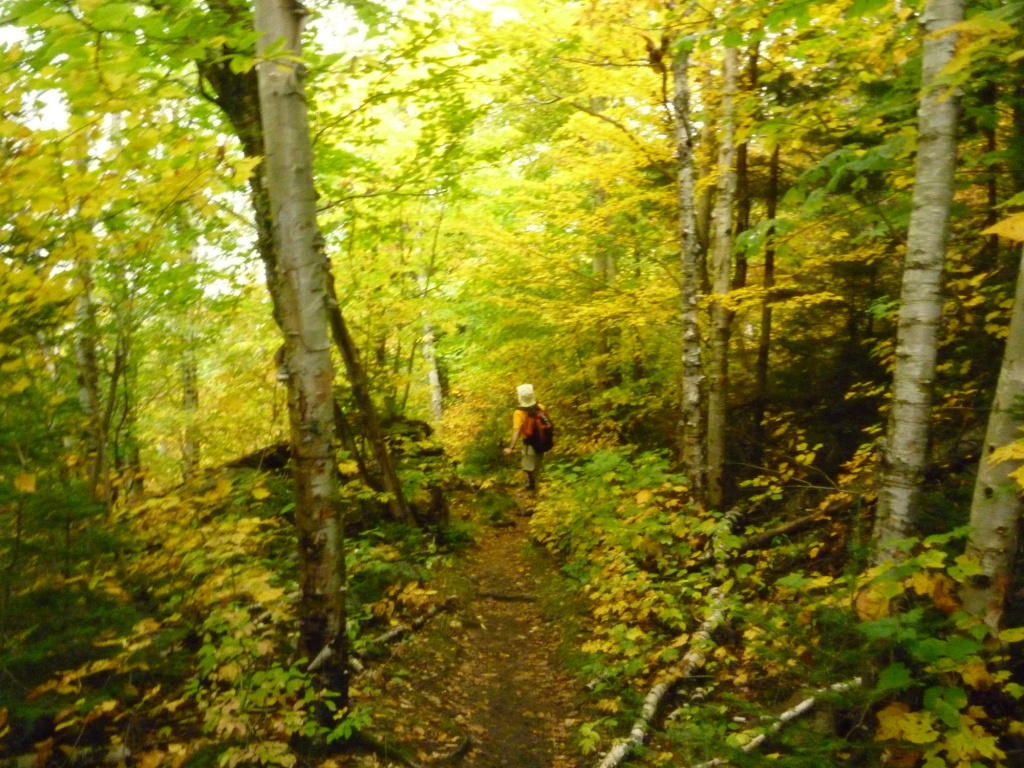 From Thoreau Falls we got back on the Ethan Pond Trail towards Zealand, following the Whitewall Brook Valley along an old railroad grade to the Whitewall slide (left). We passed the Zeacliff Trail, which we had taken last July on an excellent Zeacliff Loop hike. I was interested in bushwacking up the slide to Whitewall Mountain and we tried doing that but found the rocks to be very loose and gave up after a few hundred feet of climbing. We returned to the Ethan Pond Trail and went on to Zealand Pond in a canopy of foliage (right). We exited by the Zealand Trail to the trailhead, hitched a ride from a nice lady who dropped us on Route 302, and called Janice who kindly came to get us. Who needs to spot cars when you have wives and cell phones...