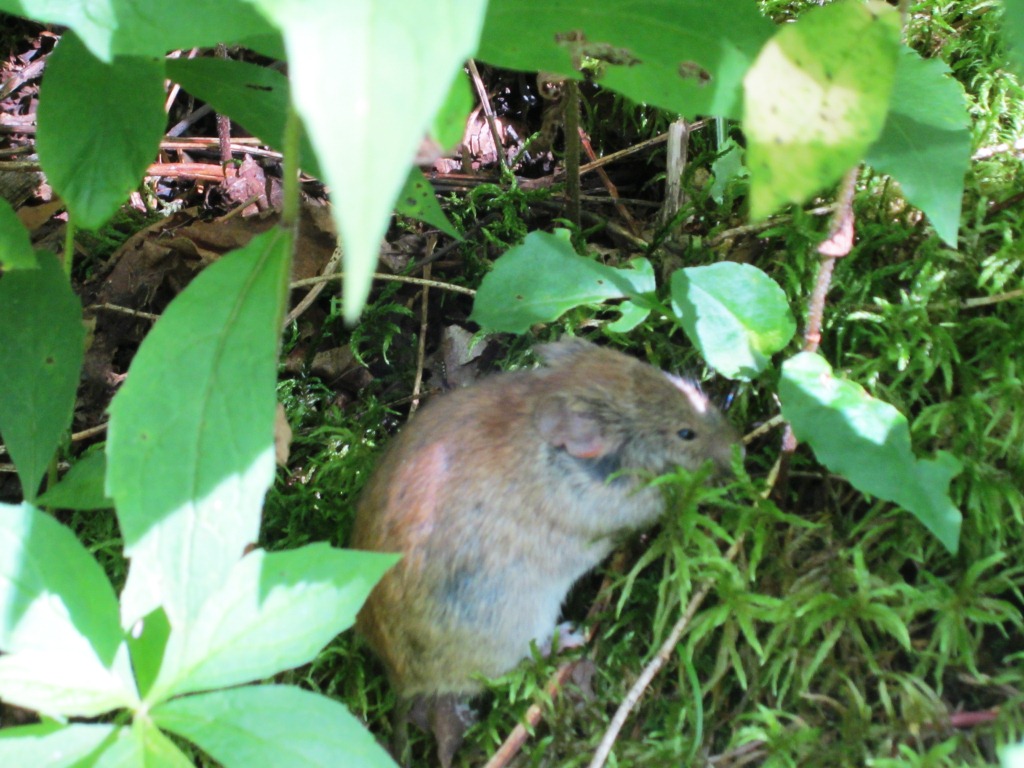 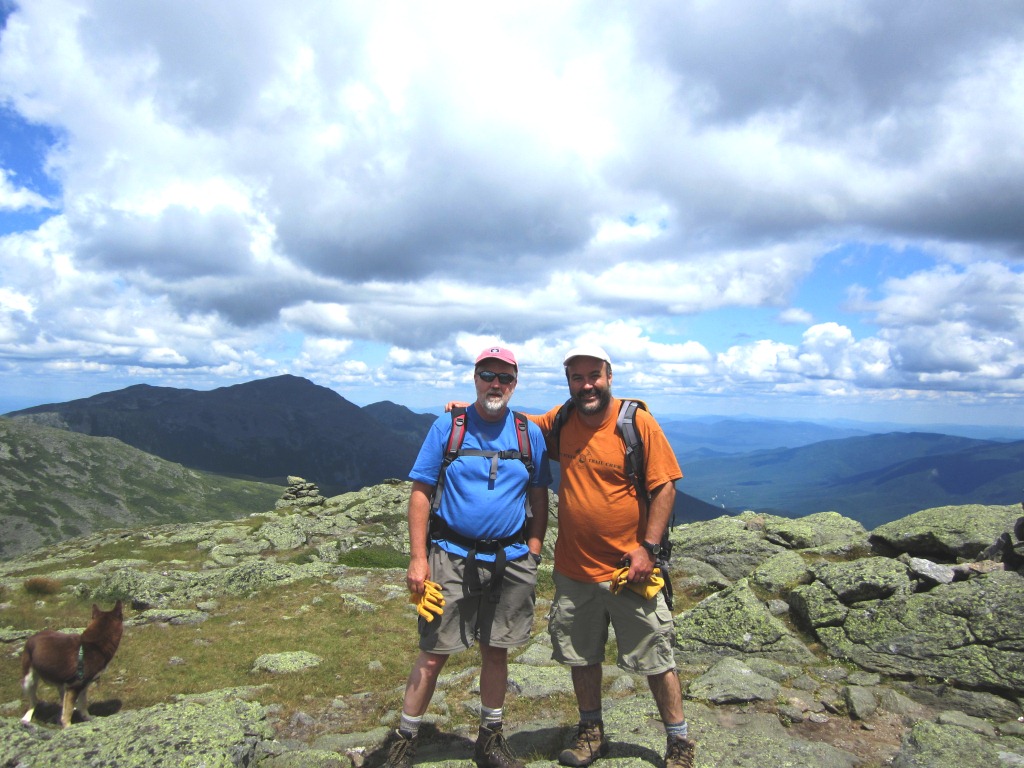 As AMC trail adopter of the Mt. Clay Loop in the Presidentials I have to inspect and maintain it three times a year. As a result I have climbed Mt. Clay more than any mountain. It doesn't qualify as a 4,000 footer because its col with Mt. Washington is just 150 feet, short of the regulation 200 feet for it to be a "true" mountain. But it is a beautiful mountain to climb, for many reasons that I've given in my previous reports (here's the latest one), and the lack of 4,000-footership keeps the Saturday crowds at bay. This time Bill Munger accompanied me on my maintenance trip. On the way up the Jewell Trail we saw a mouse on the trail, an unusual enough sight for a picture (left). Three hours later we were at the top of Clay (right). 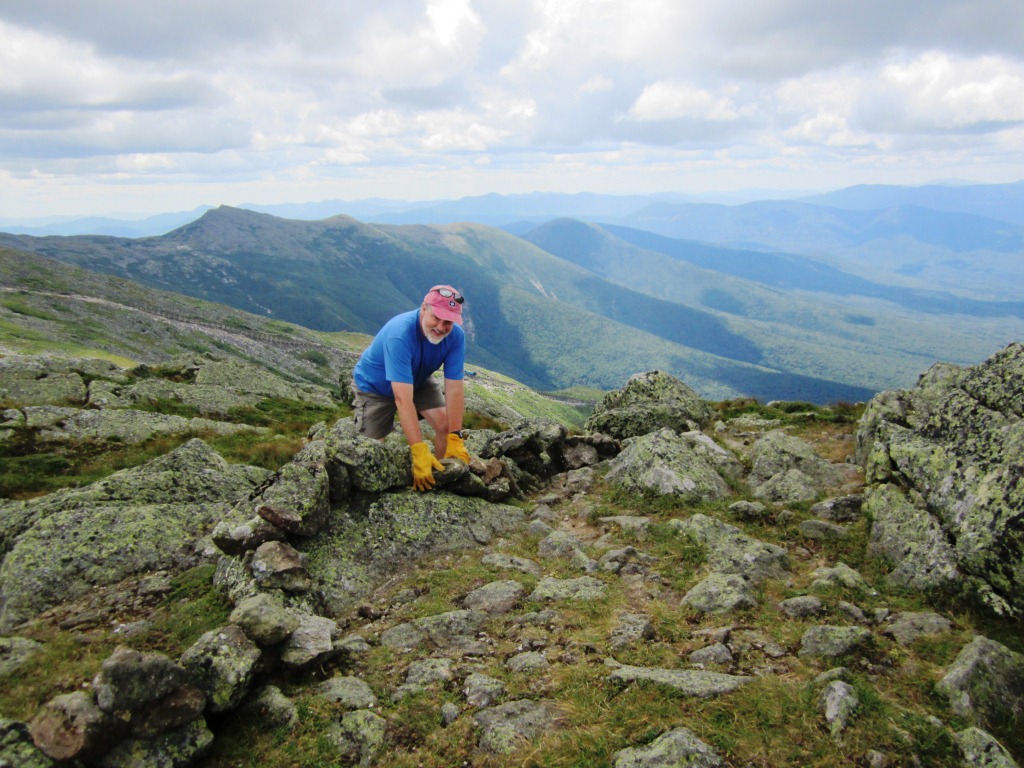 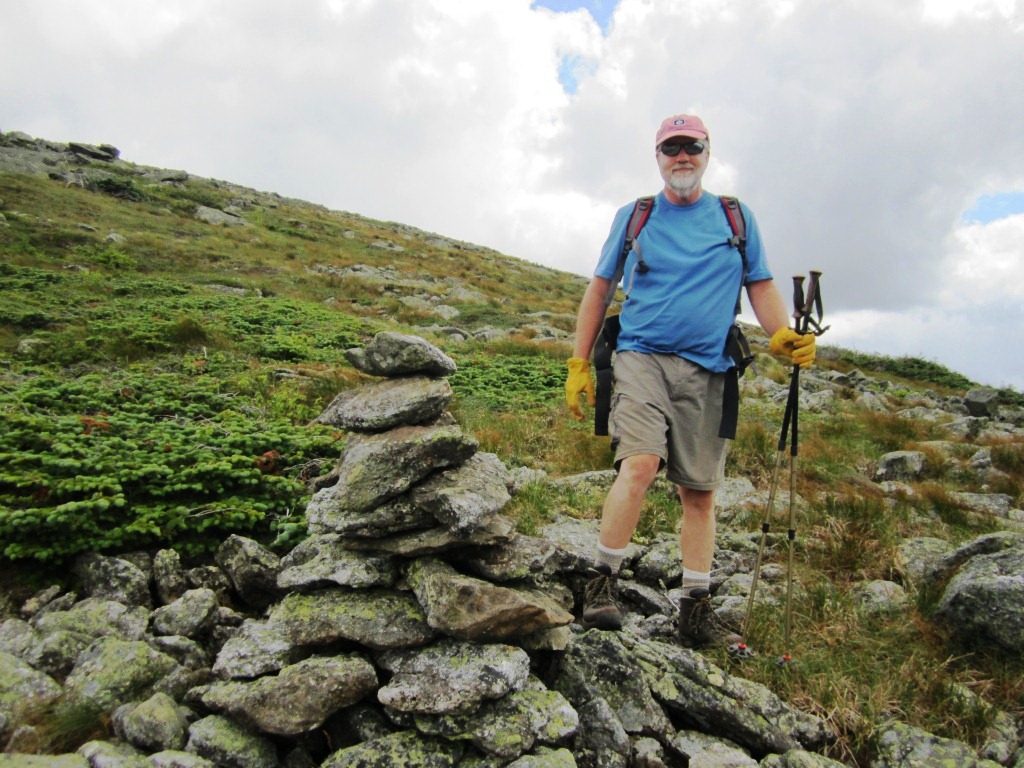 But we had work to do on the trail. I was helped by Bill's experimental genius, which I've admired ever since we were in grad school together and he fixed all the instruments that I broke. We put up a few scree walls in places where the trail had been widened by hiker confusion. This involved some pretty elaborate work on the south summit of Clay (left). We also fixed and rebuilt a number of cairns, notably on the north end of the trail that I had skipped in my previous visit (right). 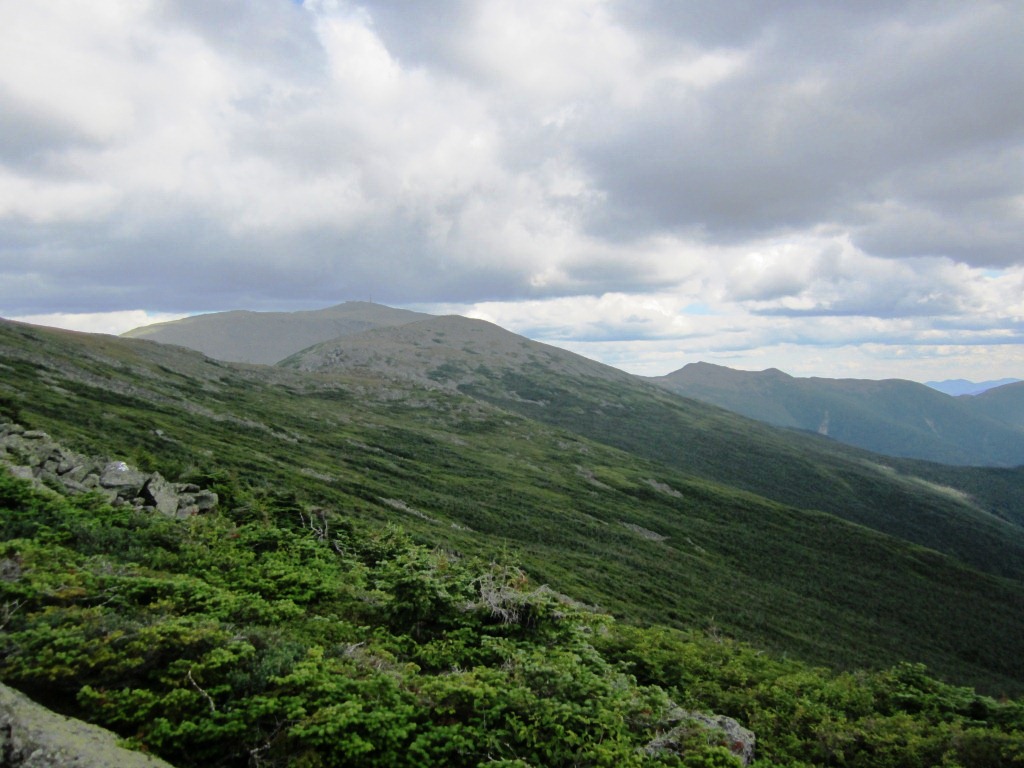 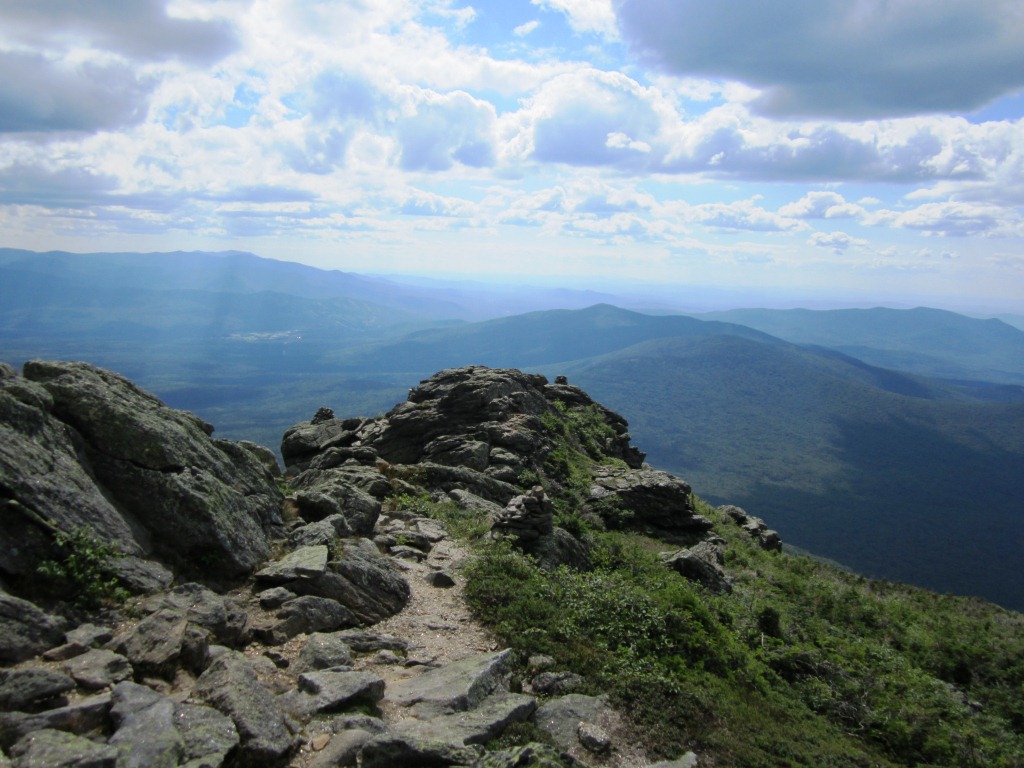 After our work was done we headed back by a long loop involving the Caps Ridge Trail (see my previous edition of doing this loop). We climbed north on the Gulfside Trail and took the Cornice to meet up with Caps Ridge just below Mt. Jefferson. From there we could look back at Mt. Clay and Washington (left). The Caps Ridge Trail is a lot of fun with many scrambling spots as it goes down its three namesake caps (right), and it remains in the open until about 4,300 feet. 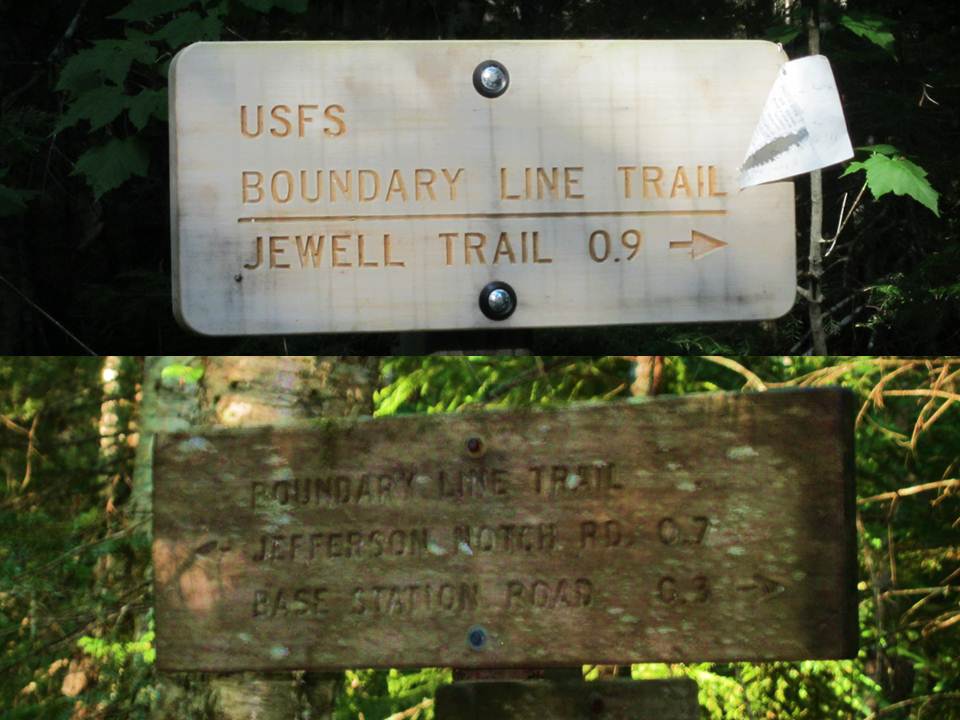 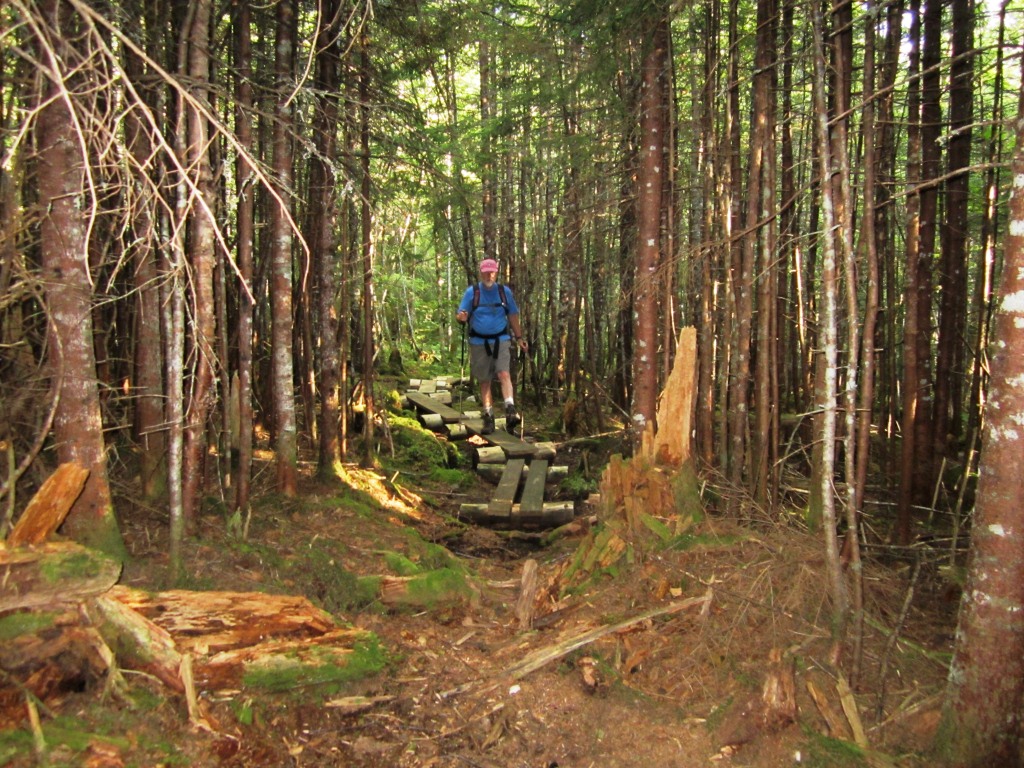 In this manner we got down to Jefferson Notch Road at 3,000 feet, and walked down the road about 1.5 miles to catch the Boundary Line Trail. I have a special affection for that little-known trail, which serves no purpose except to do our unusual loop. Even its length is uncertain - one end says 0.9 mi. and the other 0.7 mi. (left). From the tracks in the mud it's obviously frequented by moose more than people. It looks on trail maps as just a straight line, but it's in fact a lovely woods walk with a stream crossing in the middle and even new bog bridges (right). And it got us back to the Jewell Trail to complete our loop.