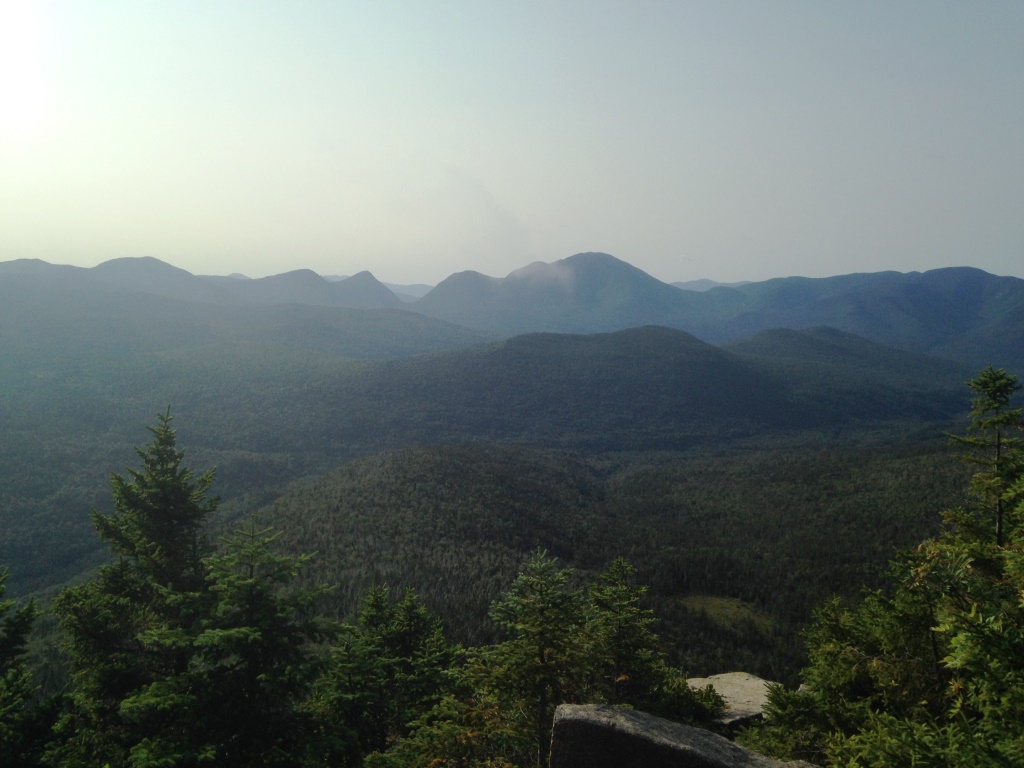 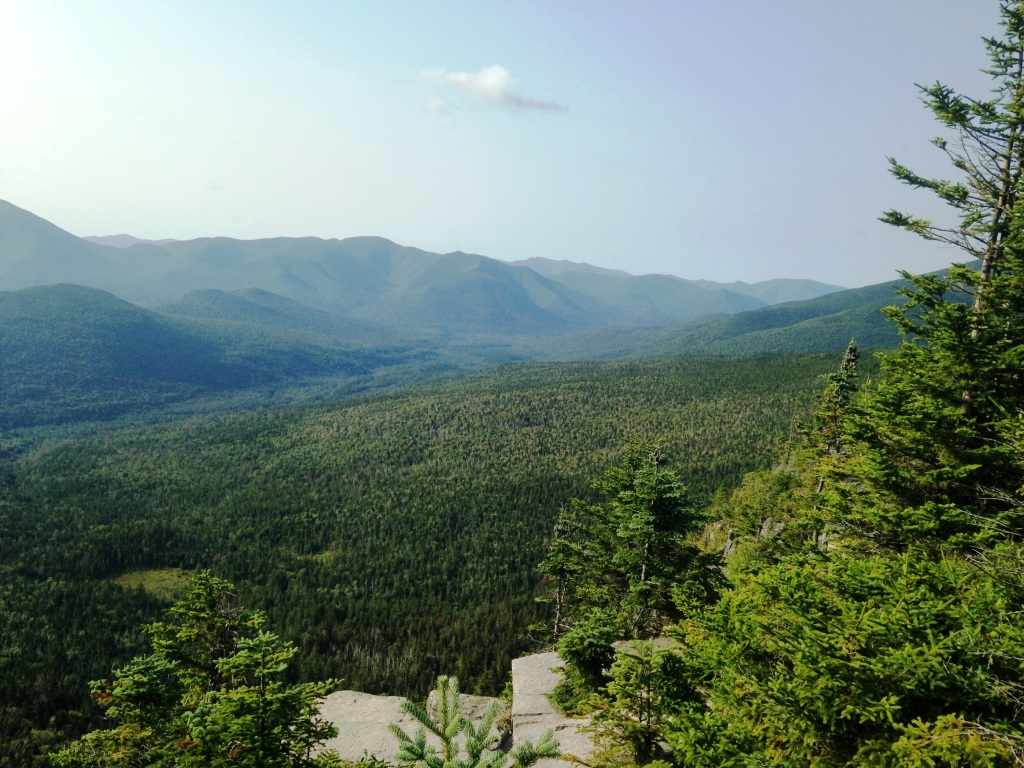 The Bond Traverse from Zealand to Lincoln Woods is a classic of the White Mountains, going over four remote thousand footers with fantastic views. It's 19.7 miles long but that includes 7 flat miles of approach, with only 4,000 feet of vertical and trails with good footing all the way, no scrambles. So it's totally doable in one long day. I had previously done twice the return trip from Zealand but had sacrificed one of the Bonds in the process to go to Bondcliff (no West Bond) or to West Bond (no Bondcliff). The traverse makes it easier to hit all the Bonds. Peter's wife Nancy dropped us off at the Zealand trailhead at 6:50 am. We took the Zealand Trail, past the hut and up to Zeacliff with a view of morning mists swirling around the Presidentials, Mt. Carrigain in front of us (left) and clear skies down the Pemi valley which would be the end of our day (right). 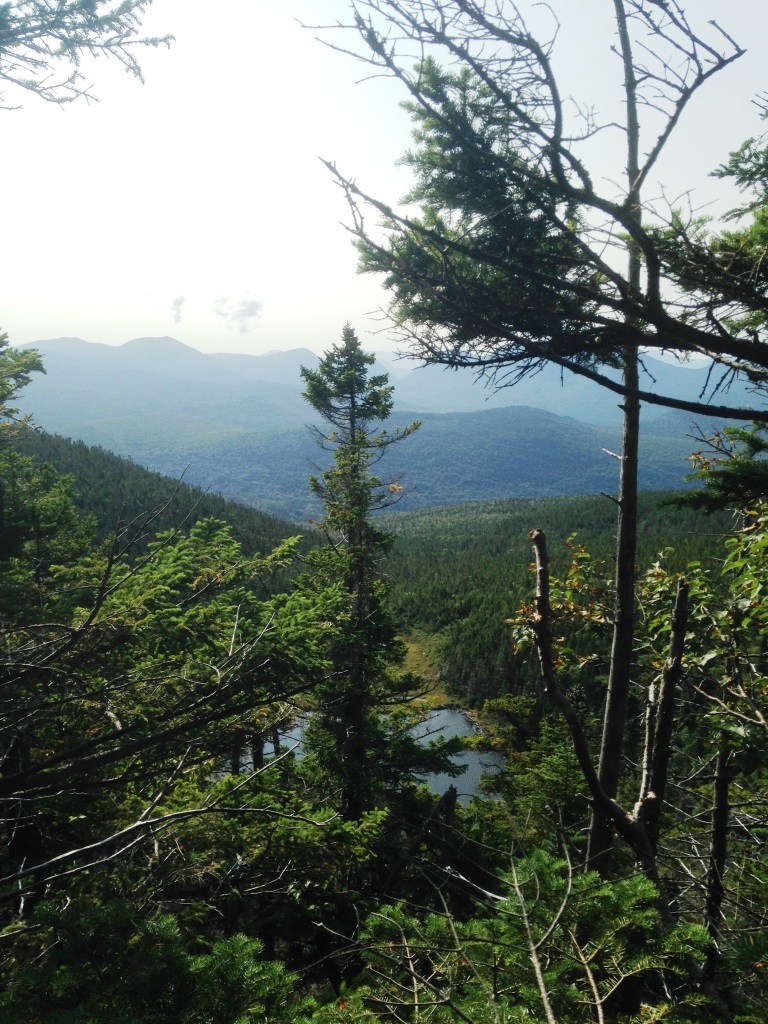 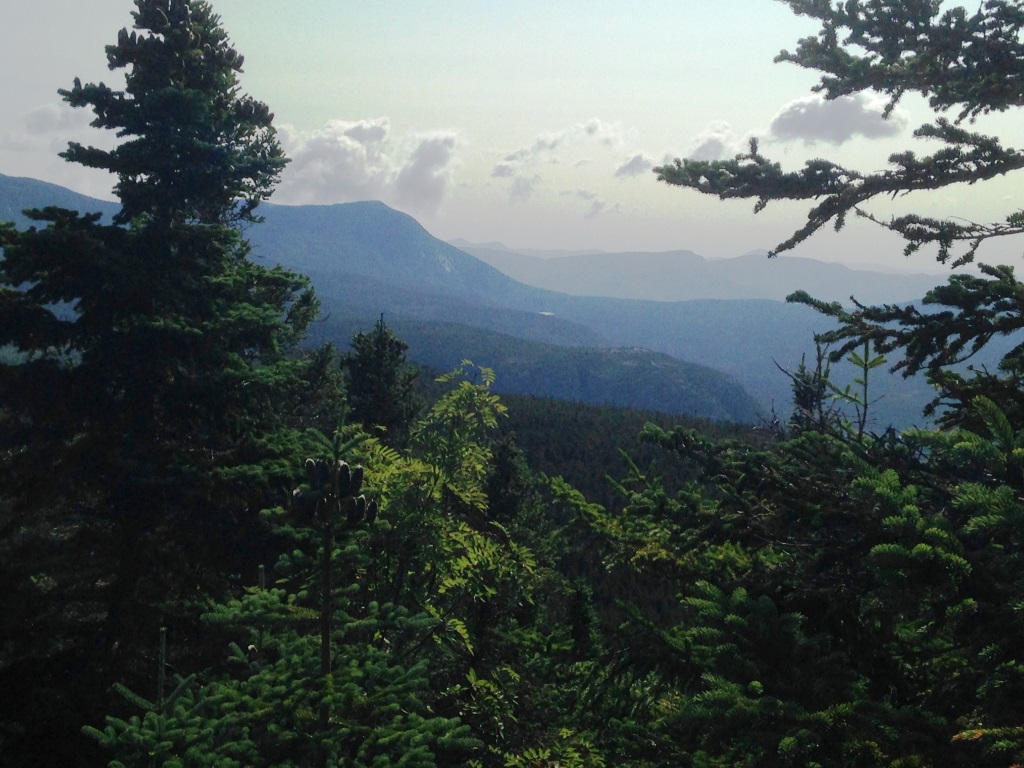 From there we followed the Zealand Ridge along the Twinway, which is part of the AT, and ran across a few through-hikers coming in the opposite direction. This is great ridge walking with excellent footing, nice mosses and woods, and occasional views like to Zeacliff Pond below (left) and to Ethan Pond way in the distance (right). 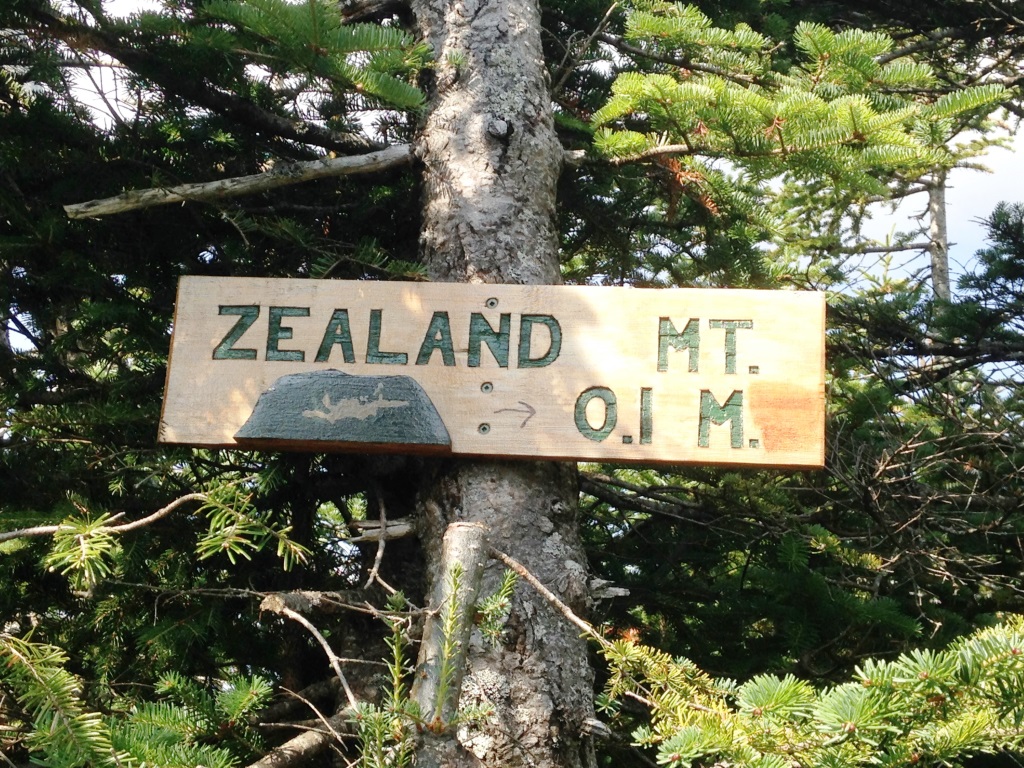 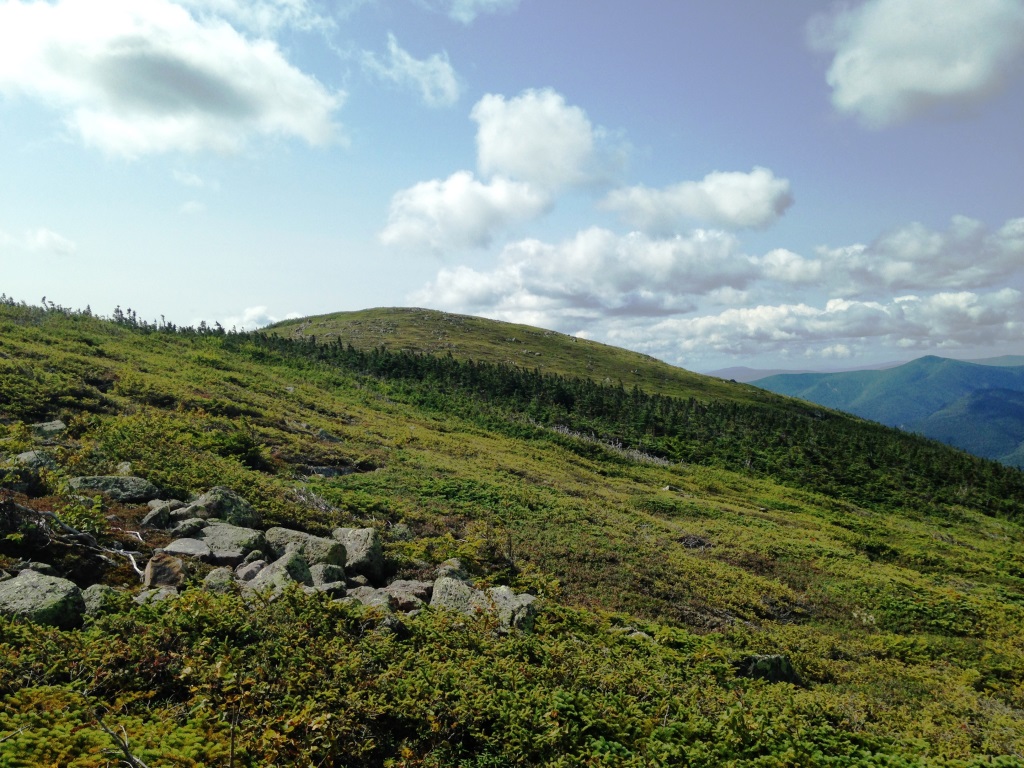 The ridge very gradually slopes upward and its highest point defines viewless Zealand Mt. (4250 ft). The spur to reach the actual top had a new and pretty sign (left), but what's with the embossed green piece and the hand-written arrow? Peter speculated that they had milled the arrow in the wrong direction, so had to hide it. It doesn't look bad - the green piece is vaguely evocative of the mountains with slides and all, and the hand-written arrow adds some goofiness to AMC/USFS humorless signs. After doing the spur it was a quick downhill to a 4,000 feet col and up to Mt. Guyot at 4,500 feet (right).

Mt. Guyot is a beautiful round peak which would be right at home in the Scottish higlands, covered with dwarf scrub and views all around. It was carpeted with cranberries and blueberries. The view to the Franconia Ridge was particularly photogenic with the sun on our back (left). There were also great views to the west (right). Guyot does not qualify as a 4,000 footer because it doesn't have a 200 ft col with South Twin, and that's just as well because we had it to ourselves. 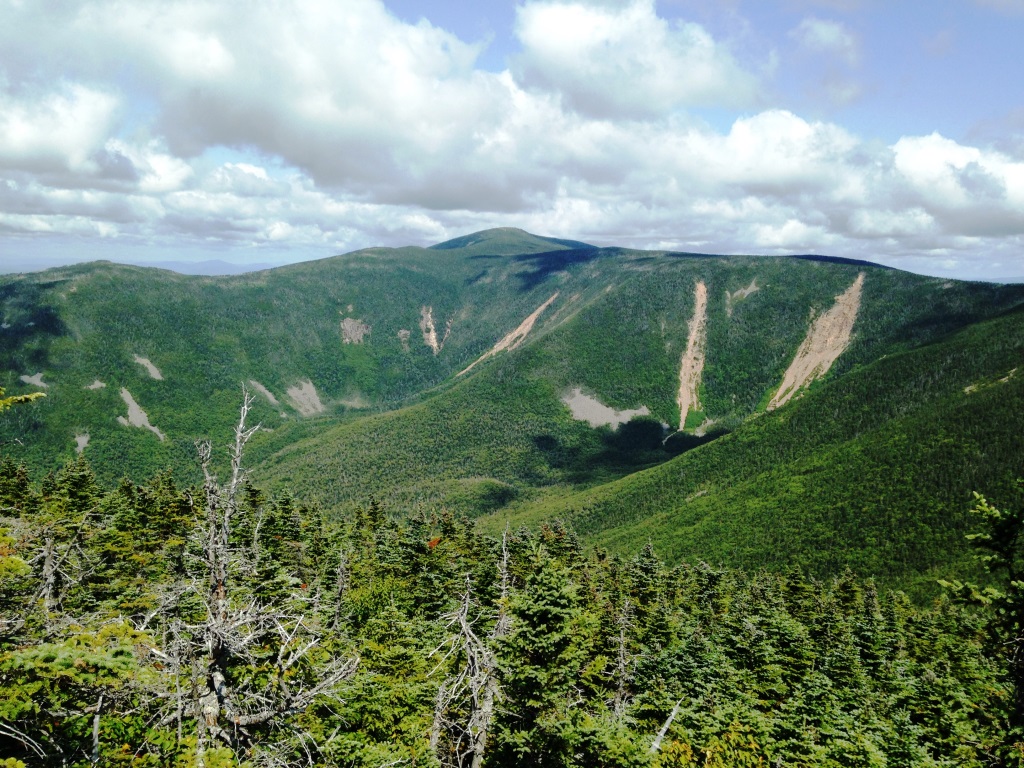 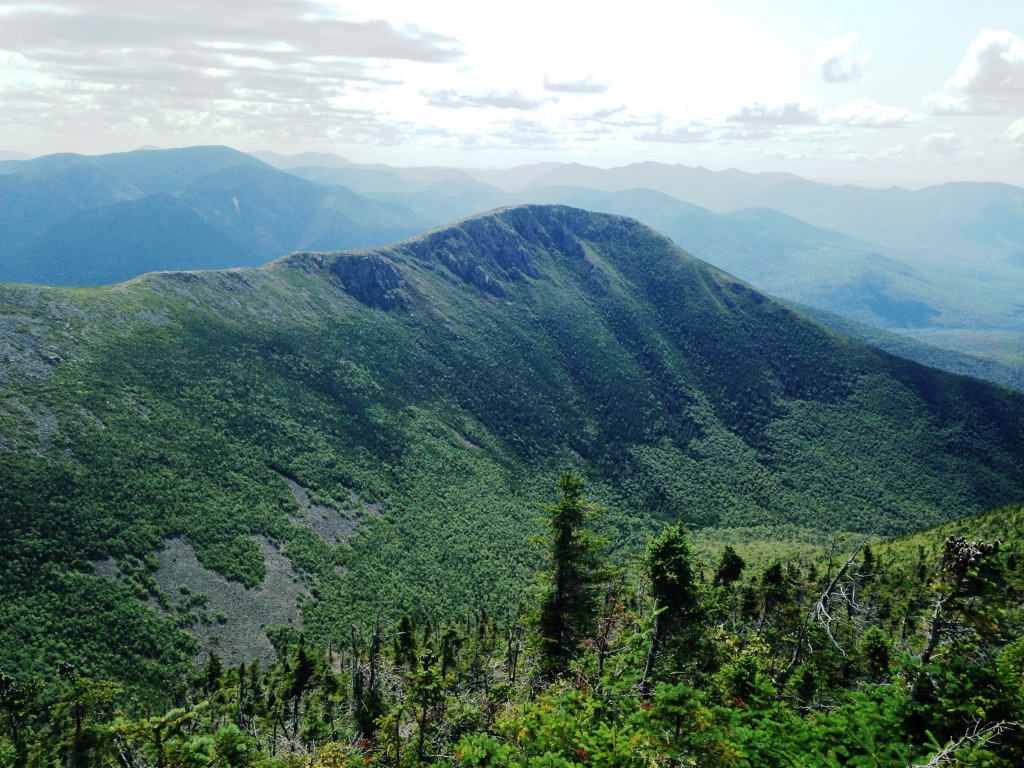 From there we headed south on the Bondcliff Trail, back into the forest, and took the West Bond spur. West Bond had been the last of my 4,000 footers, back in 2012. It is a rocky peak sticking out of the forest with 360 degree views. The view north to South Twin shows spectacular new slides (left). There is also a great side view of Bondcliff (right). There was another group with us at West Bond doing the same Bond traverse, and they kindly took our picture (below left). 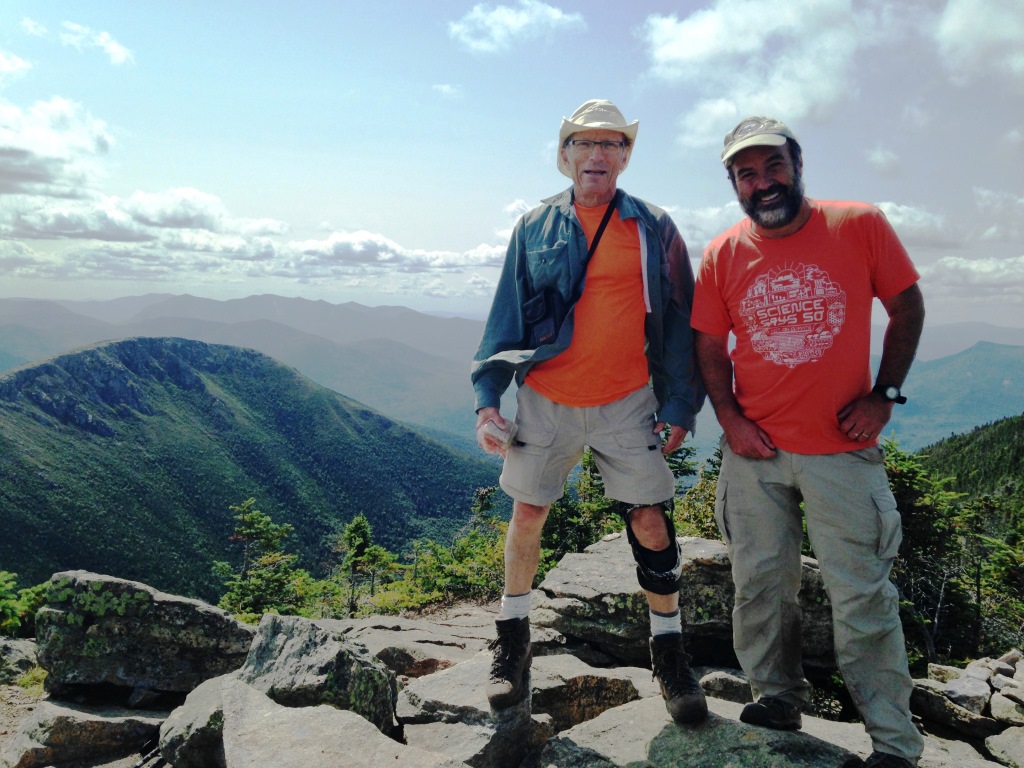 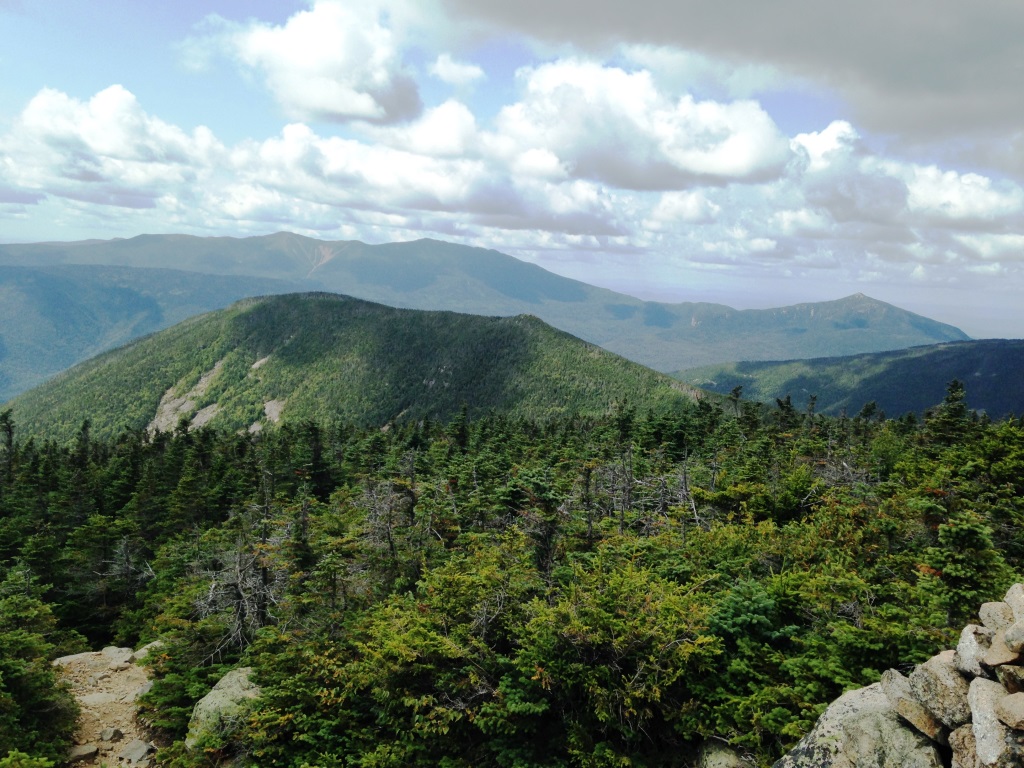 From there we headed back to the Bondcliff Trail and up Mt. Bond (named for another Harvard professor) at 4,700 feet. Mt. Bond is another rocky tor sticking out of the forest and it has again great 360 degrees views. We had again the view of the Franconia Ridge, this time with West Bond in the foreground (right). In that foreground ridge West Bond is the rocky point on the right - the ridge continues beyond it but apparently does not get any higher. You can guess Galehead Mt. below and to the right of Mt. Garfield. 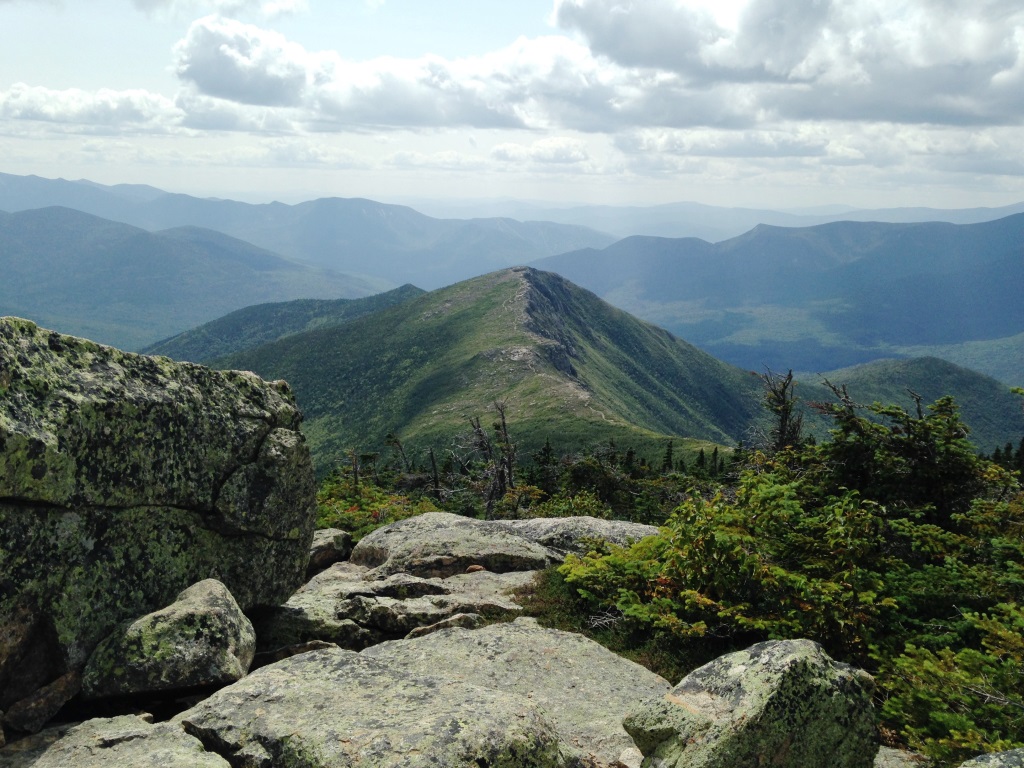 The most spectacular view from Mt. Bond is down the spine of Bondcliff (left). The view to the west was also very nice (right). From Guyot and Bond we could see Norcross Pond to the right of Mt. Nancy, and this is the first time I had been able to see it from anywhere so I was very pleased. Somehow though it doesn't seem to show up in any of my pictures. 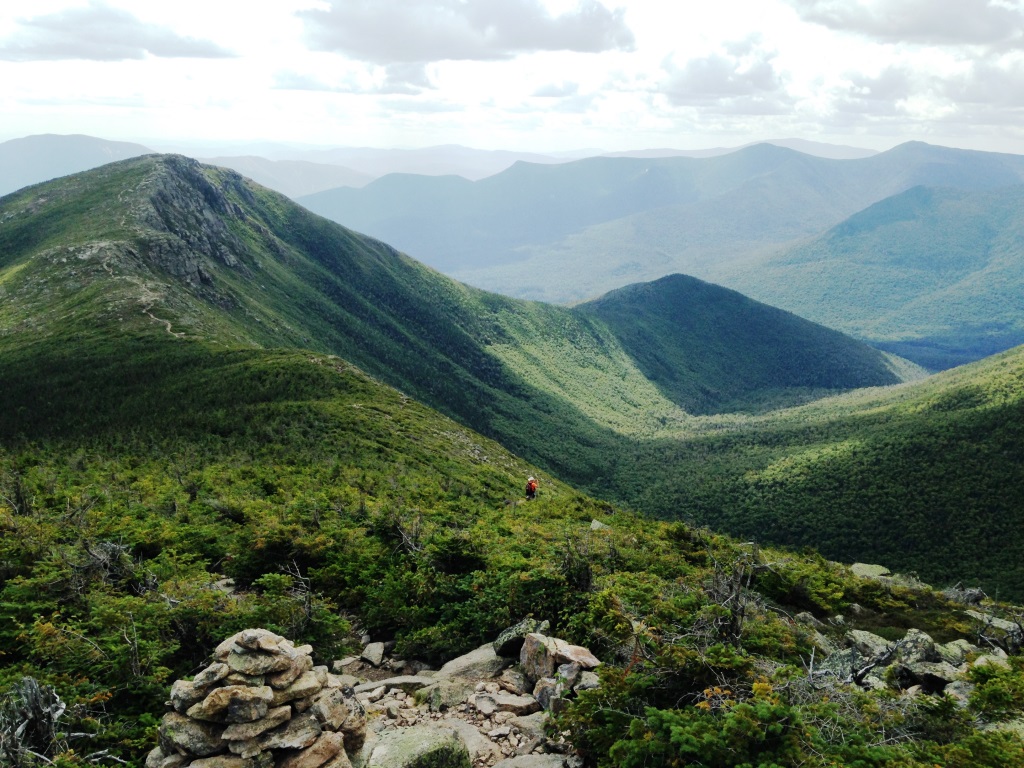 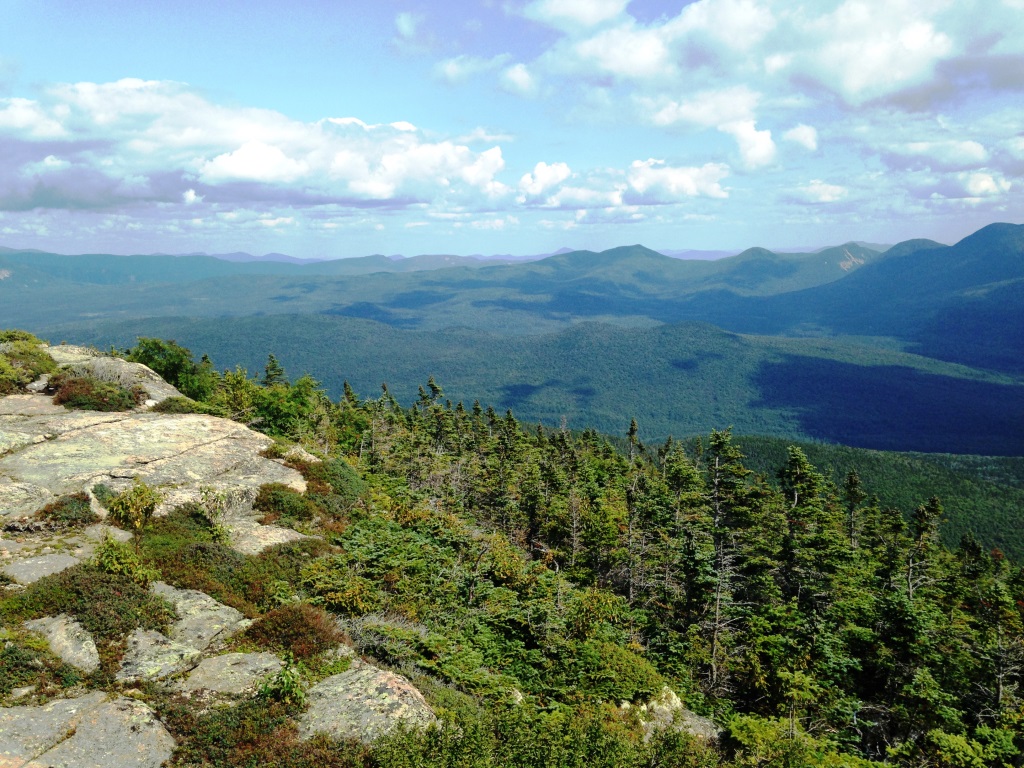 We then headed down to Bondcliff (left), going back into the forest but then re-emerging in the open at 4,000 feet for the climb to the top at 4,250 feet. Despite its low elevation that whole ridge is very much above treeline - there is tundra vegetation like in the Presidentials or Franconia Ridge. Again, beautiful views all around such as toward Mt. Carrigain (right). 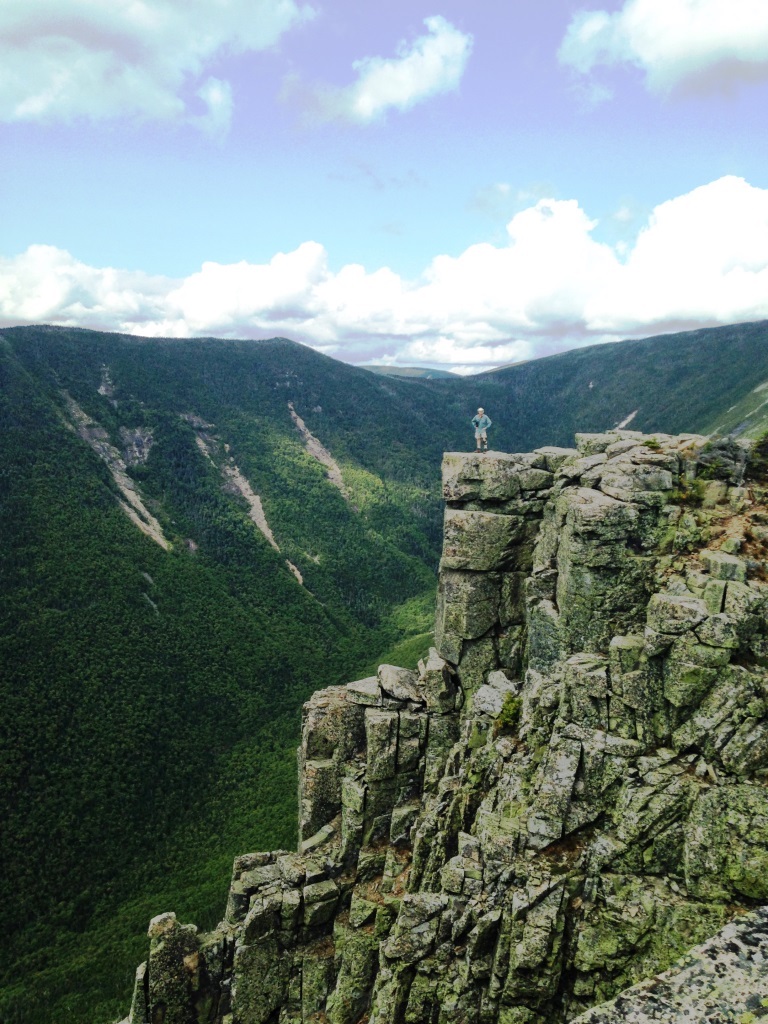 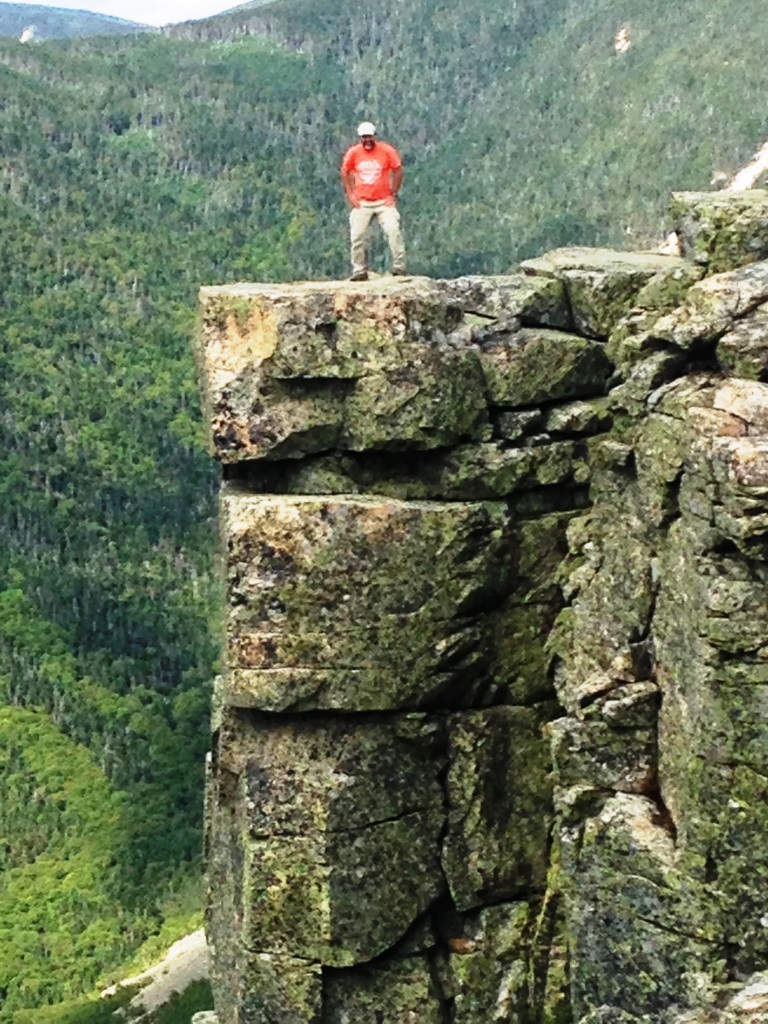 Bondcliff has an iconic platform at the edge of the cliff, which was the front cover of my first White Mountains trail guide back in the 1980s and I used to wonder where it was. At left is Peter standing on it, with slide-scarred West Bond in the back. After that it was my turn but I was a little nervous from the exposure and it shows (right). 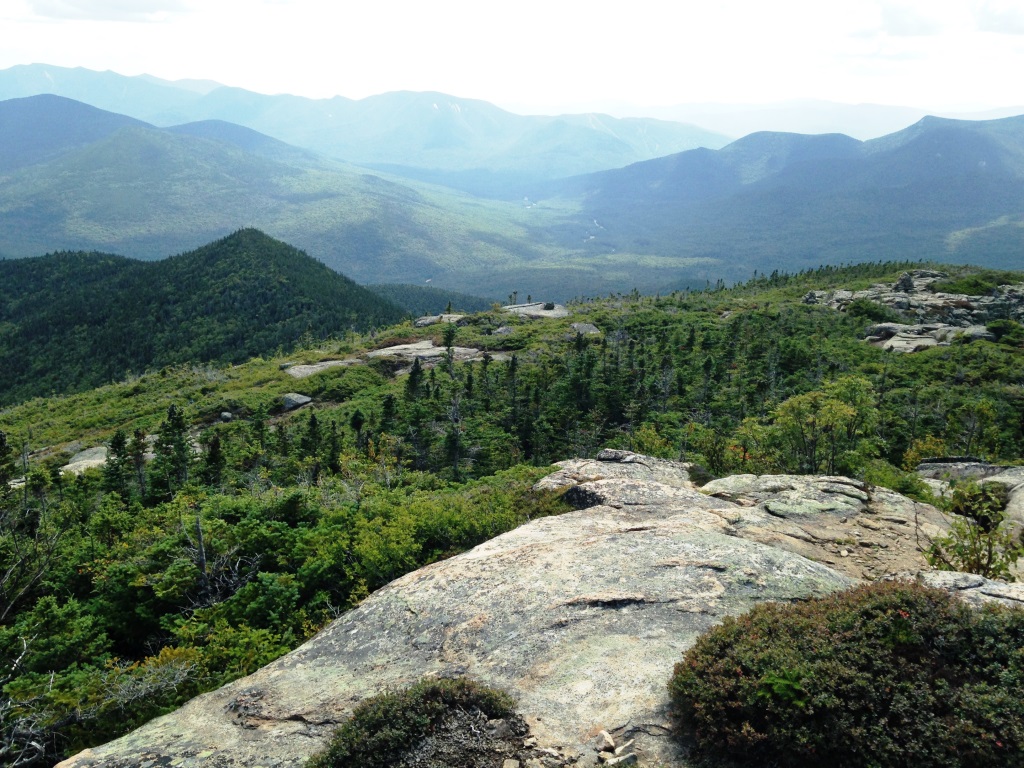 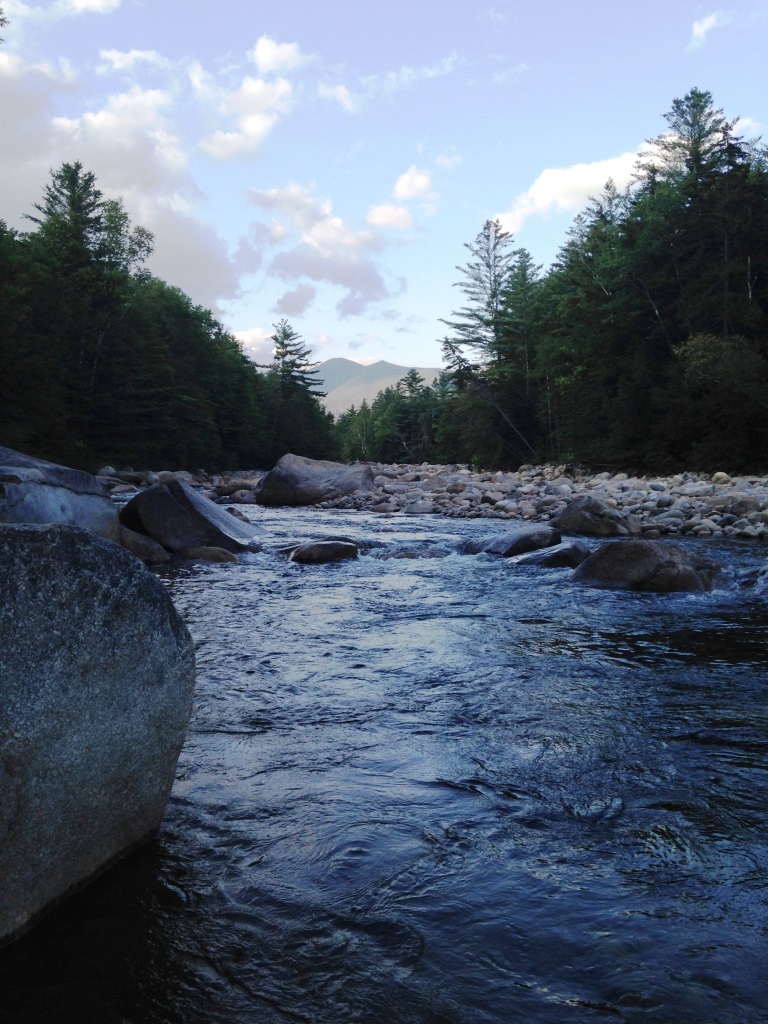 After that we headed down on the Bondcliff Trail, with a last view to the south before entering the forest (left). I had expected the trail down to be steep and wet and scrambly, but it was in fact remarkably easy and well maintained with excellent footing, allowing us to fly down all the way to 1,600 feet where we reached the Pemi Valley at an old logging camp (Camp 16). There was a large clearing slowly being reconquered by the forest. From there it was 4.7 miles of flat straight walking along the former railroad bed, and out through Lincoln Woods. At some point there was a nice view along the Pemi looking toward Bondcliff in the evening light (right). And then it was out of the woods at the Lincoln Woods trailhead where my wife Janice arrived to pick us up just as we were exiting the woods, great timing!