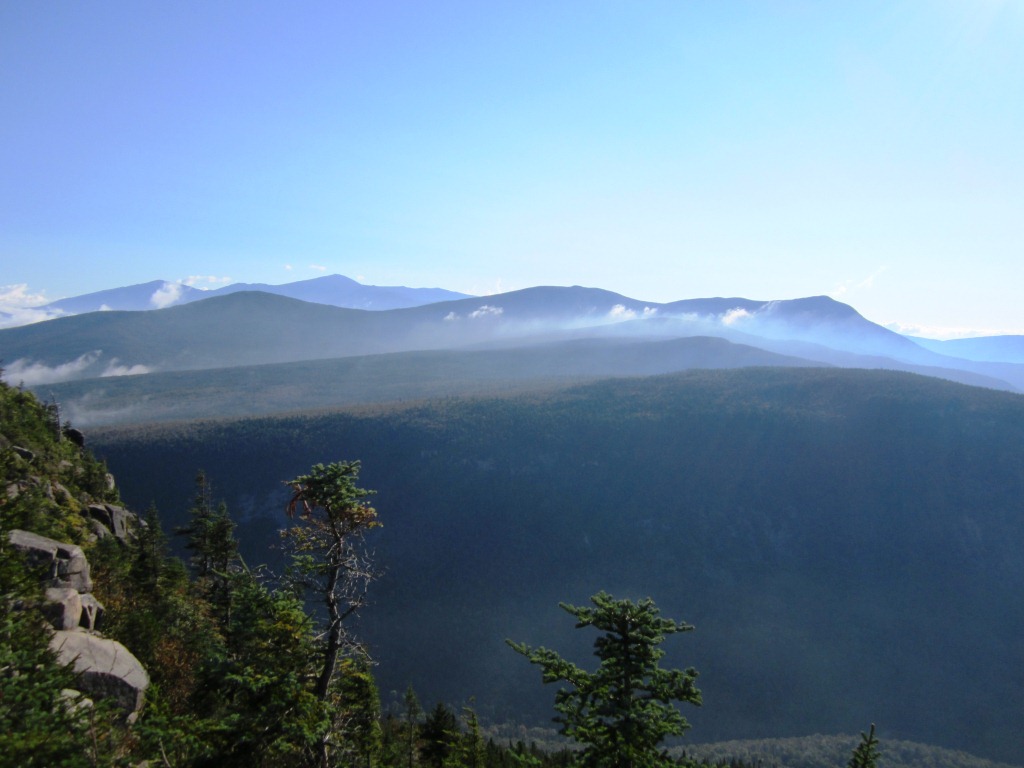 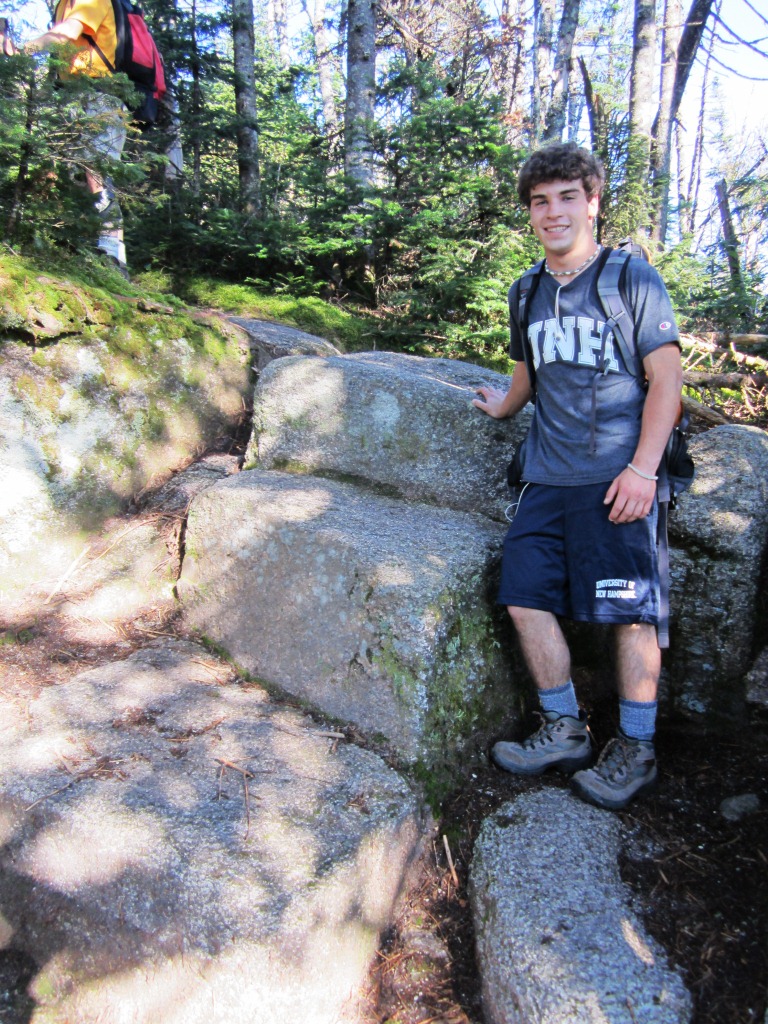 It was Saturday of Labor Day weekend and my son Alex was visiting from the University of New Hampshire where he is a freshman. Alex had finished all the forty-eight 4,000 footers of New Hampshire last year. I had just one to go (West Bond) and he wanted to celebrate on top with me - what a good kid. So this was a unique opportunity. We started with Peter Wyatt from Zealand Rd. at 6:20 am and climbed to Zeacliff in the morning fog. The view from Zeacliff is generally outstanding (more on that later) but the morning haze still hung in the air. There were nice shadows of fog and cloud swirling around the Presidentials (left). 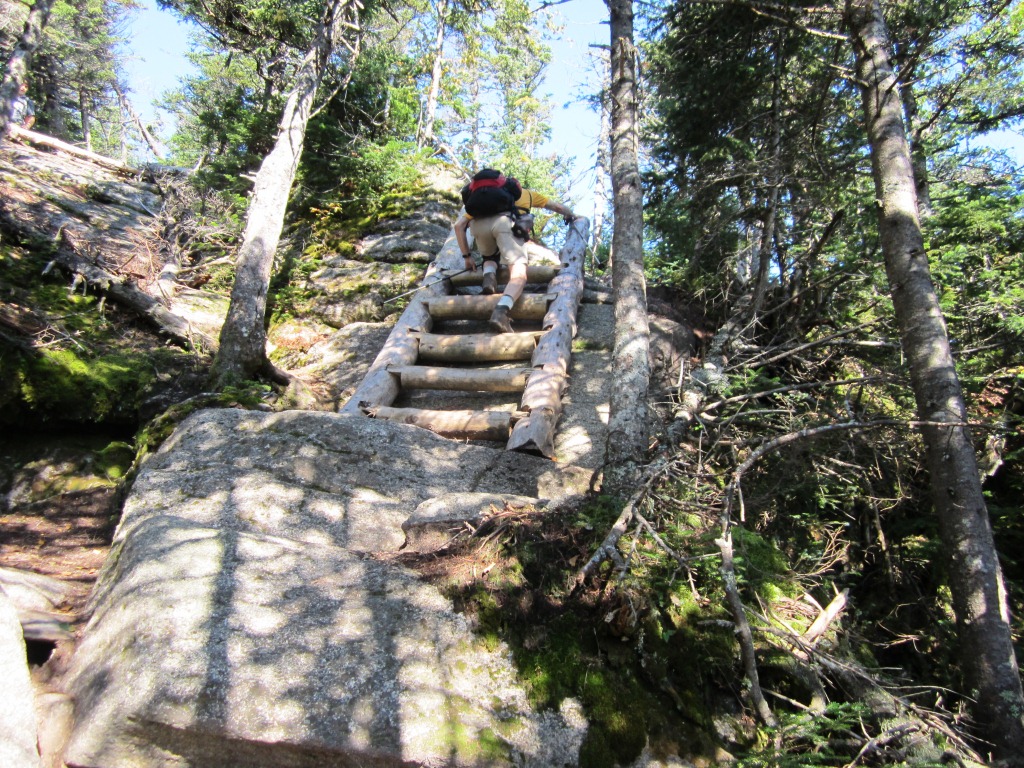 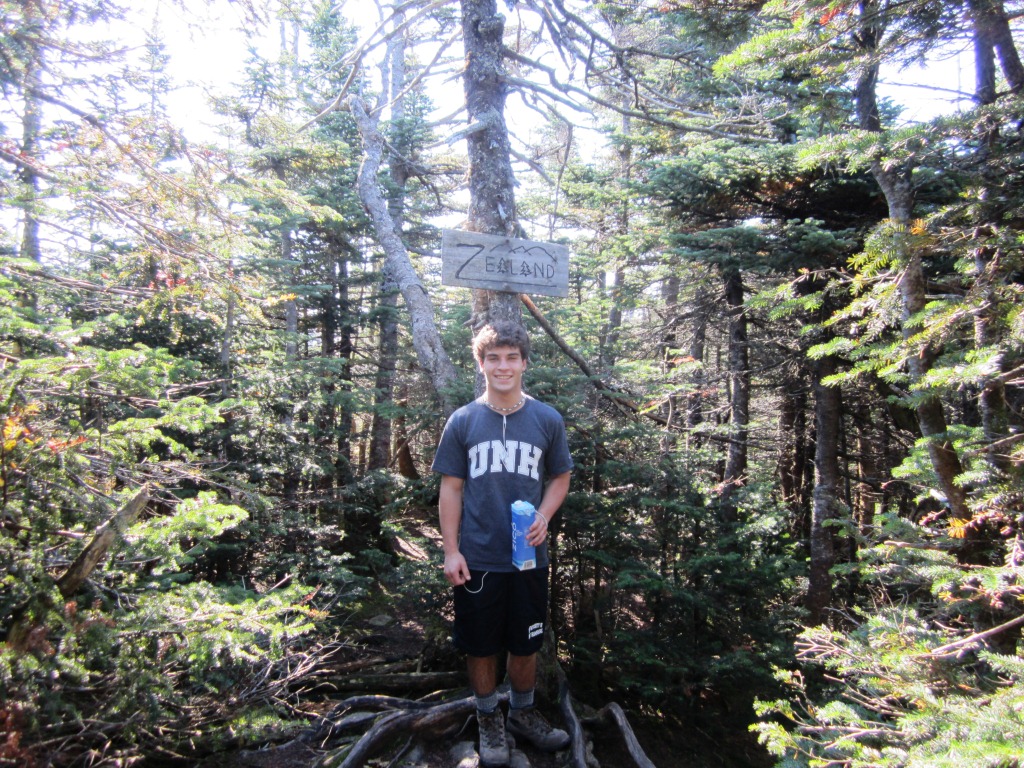 From there we continued along the Twinway which follows Zealand ridge. This is part of the Appalachian Trail so there are occasional examples of fine trailsmanship such as these spectacular rock stairs carved out of the ledge (above right) and a massive ladder (left). The trail along the ridge is very ledgy and pleasant. We got to the top of Zealand Mt., which is wooded and uninteresting but has a cute sign (right). 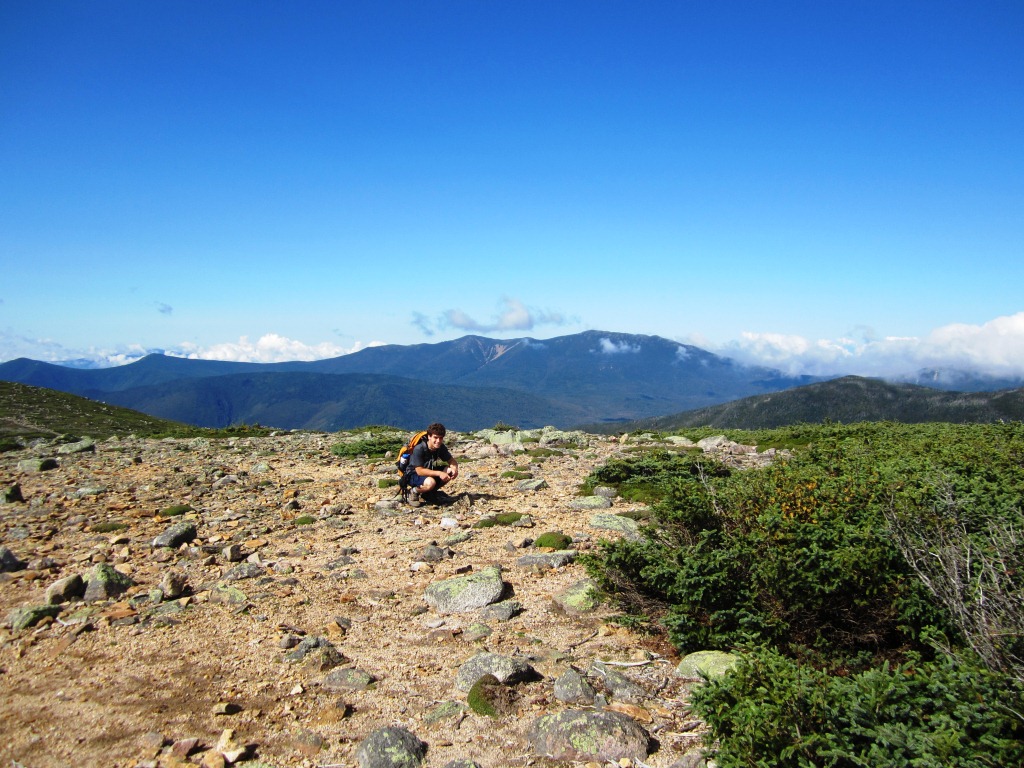 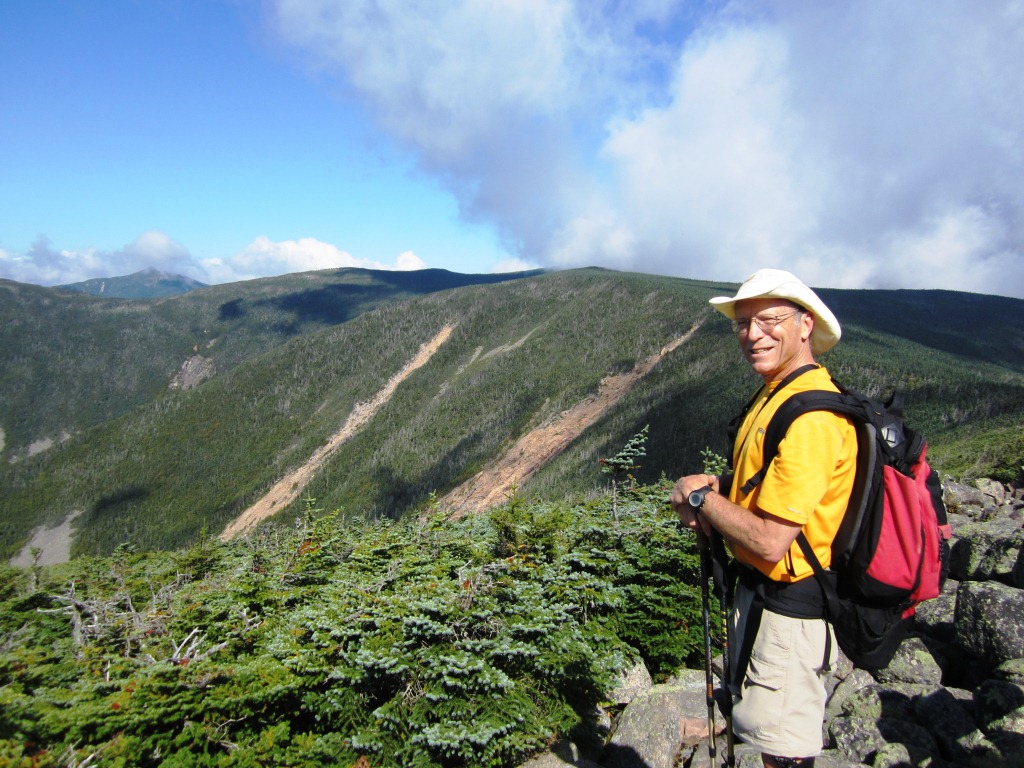 Shortly after Zealand Mt. the trail drops to a col and then up Mt. Guyot. Fog lifted ahead of us as we climbed up, and we were greeted above treeline by blue skies. Mt. Guyot (4,600 feet) is not classified as a 4,000 footer, apparently because it doesn't have enough of a col with the fairly distant Twins. However it is a marvelous summit with tundra vegetation and 360 degrees view, including this one towards the Franconia Ridge (left). The slopes toward the Twins were scarred by fresh slides (right). These slides are characteristic of the White Mountains - the soil is thin and the slopes are steep, so flooding and wind events can cause total scraping of vegetation. We wondered about the origins of these brand new slides - Hurricane Irene last year? 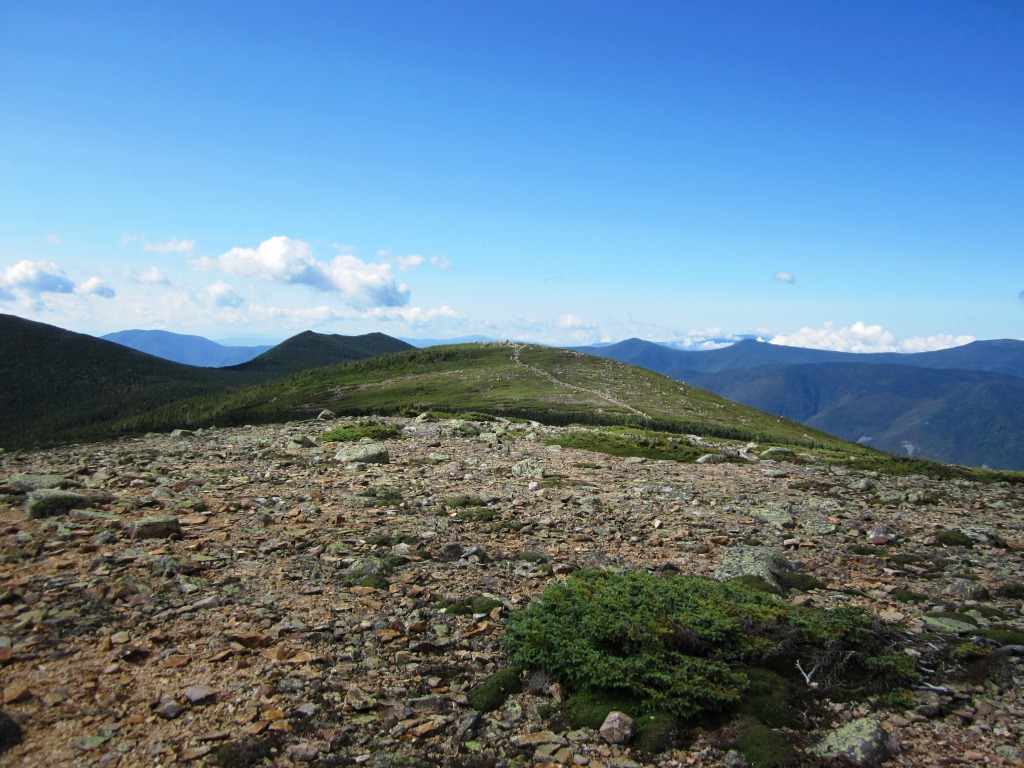 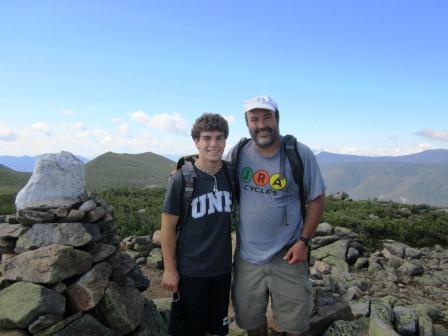 Mt. Guyot actually has two summits, one on the Twinway and one on the Bondcliffe Trail. From the Twinway summit we could see the other summit (left) and it looked higher, but the topo map indicates the one on Twinway as the highest. To add to the confusion, there is nothing to mark the top on Twinway whereas the other top has a "summity cairn" as Alex called it (right). 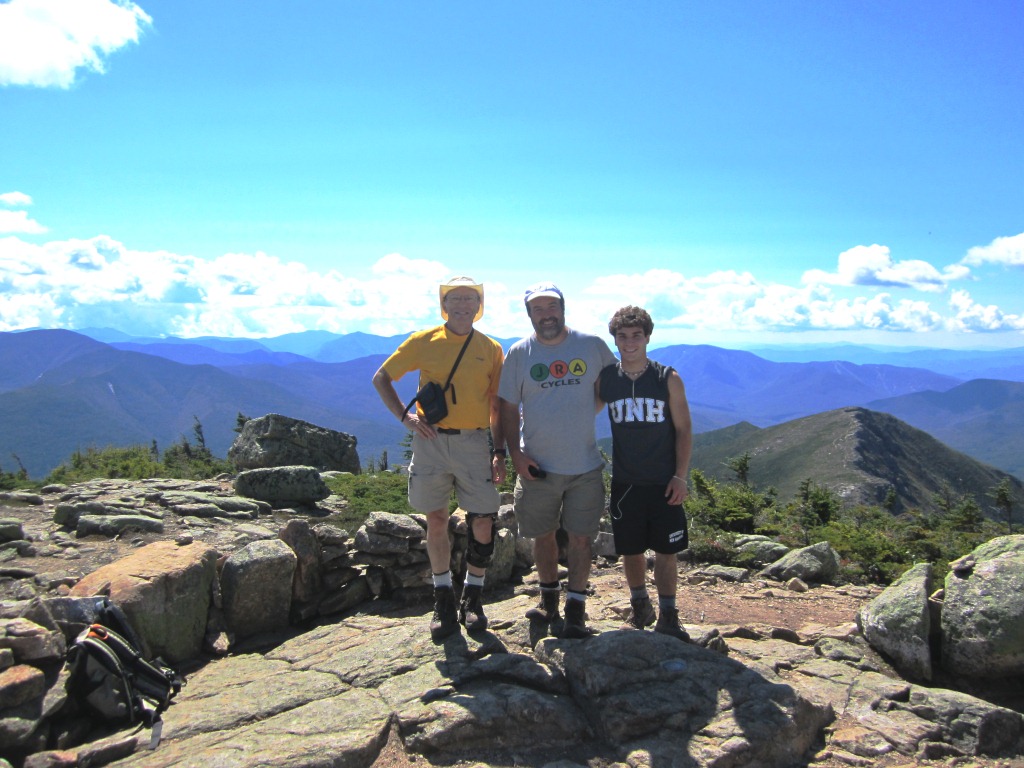 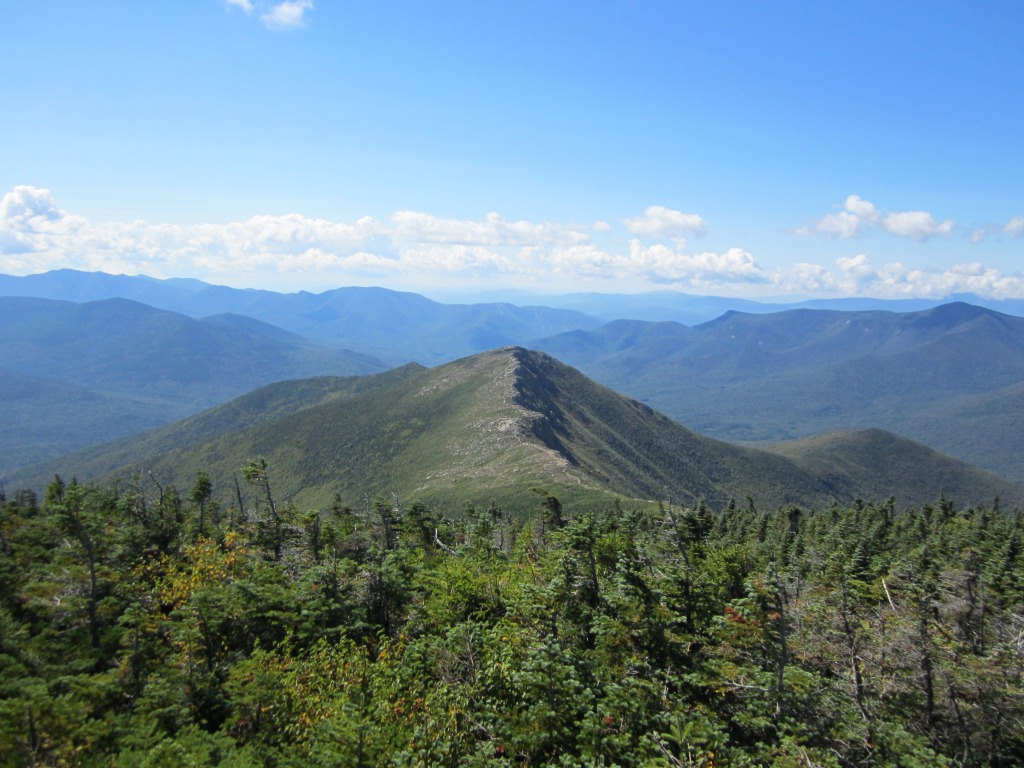 From there we went to Mt. Bond. I was surprised to see quite a few people on the trail (though not enough to be annoying). Of course, the Bonds are a favored destination for ambitious hikers and backpackers, and this was a beautiful Saturday of a three-day week-end. At the top of Bond we got our picture taken (left) and stopped awhile for lunch. The iconic view from Bond is of Bondcliffe to the south (right) and going there was mightily inviting - but today we were on a mission for West Bond. Another day. 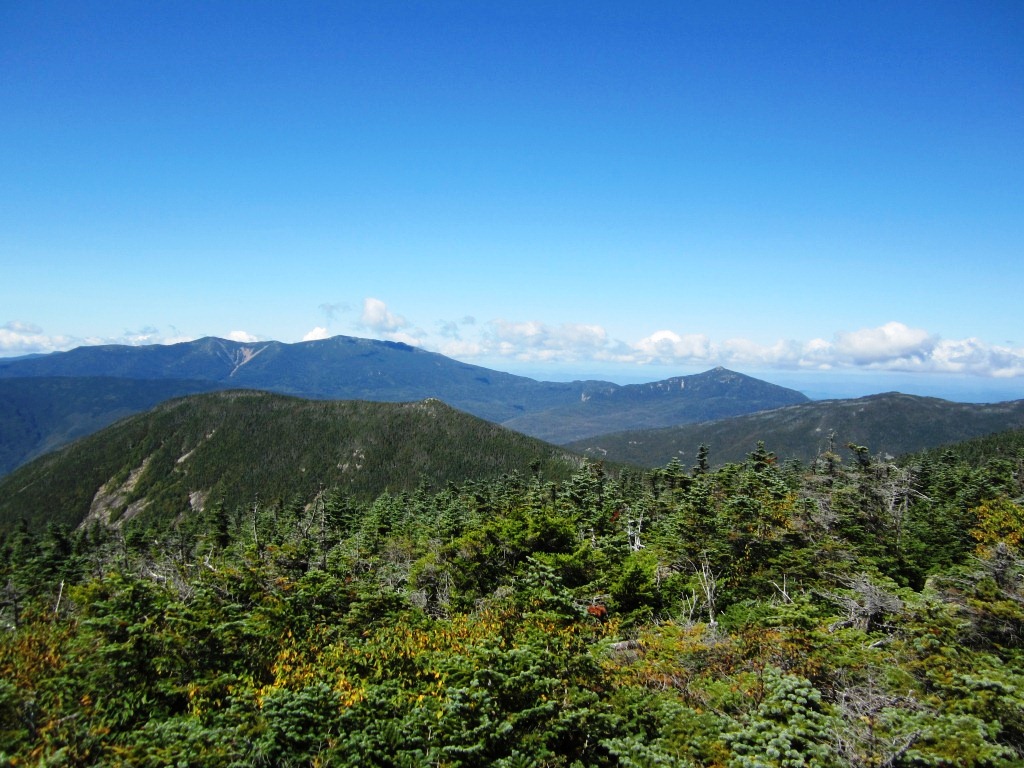 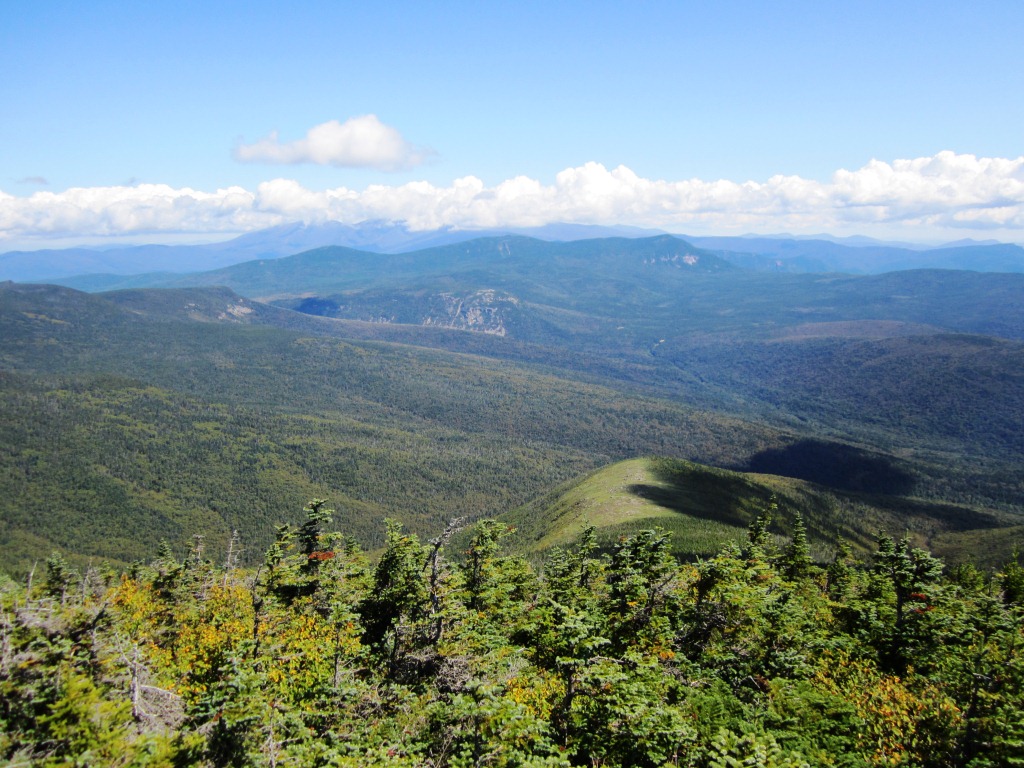 Mt. Bond is not really above treeline (unlike Guyot - which makes it even less fair that Guyot would not be considered a 4,000 footer!). However, it does have a fantastic 360 degrees view from the top. At left is the view to the north, looking toward West Bond and with Franconia Ridge and Mt. Garfield in the background. At right is the view to the east, spreading over the vast plain with Zeacliff and Whitewall Mtn. sticking out. If you blow up the picture you can see Thoreau Falls as a white speck to the right of Whitewall. There is a bare ridge in the foreground (shoulder of Bond) on which there is unfortunately no trail. From Bond we could also see several distant ponds (Ethan, Shoal, Norcross) but they don't show up well in these pictures. 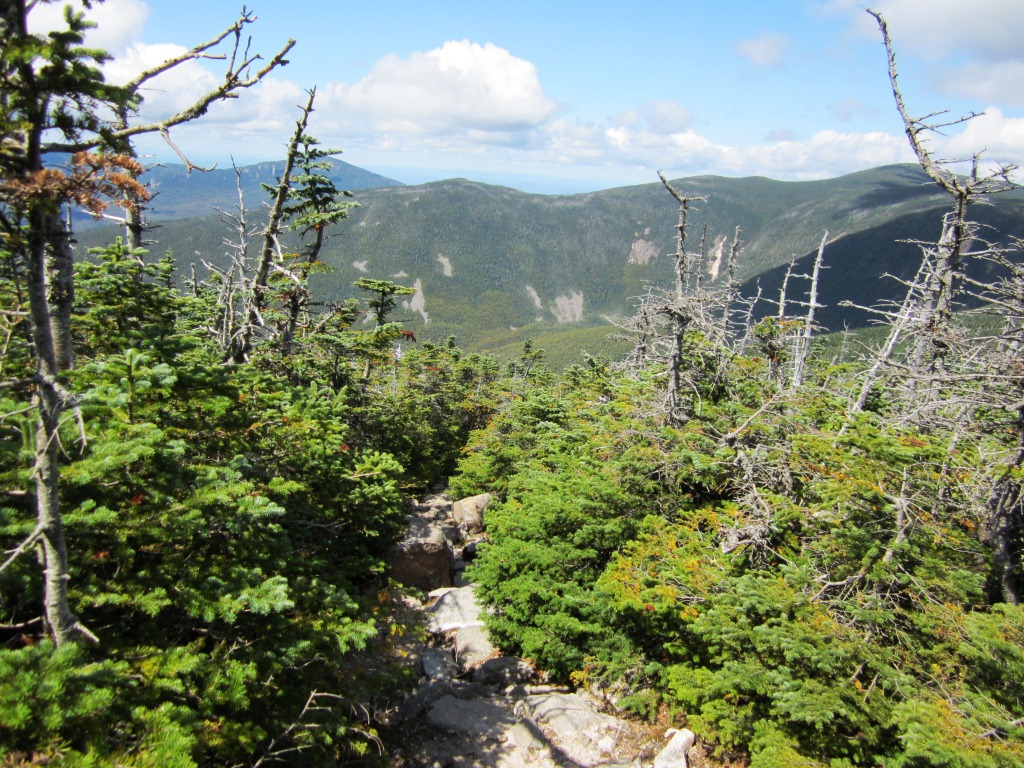 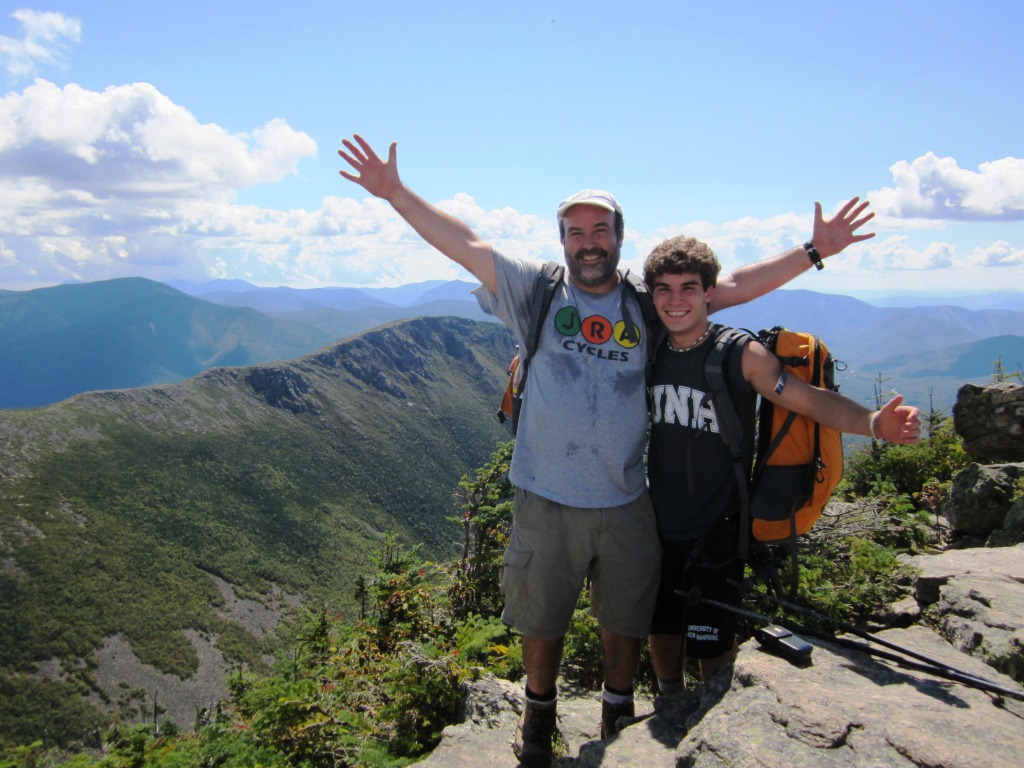 We returned from Mt. Bond, with great views from the trail of all the slides (including the new ones) scarring the Twin-Guyot slopes (left), and turned left on the West Bond Spur. A little dip, another climb, and before we knew it we were at the top. This was it! I had accomplished the goal of all serious White Mountains hikers - completion of the fourty-eight 4,000 footers. Alex helped me to celebrate (right). I do owe a big debt to him, because his quest to complete the 48 pushed me to do climbs that I would not have otherwise done, to remote 4,000 footers with no views like Mt. Cabot. Now I have to figure out what to do with the rest of my life. I'm told that two people have "squared the 48" (climbed each 4,000 footer 48 times). There has to be something else to do with life. 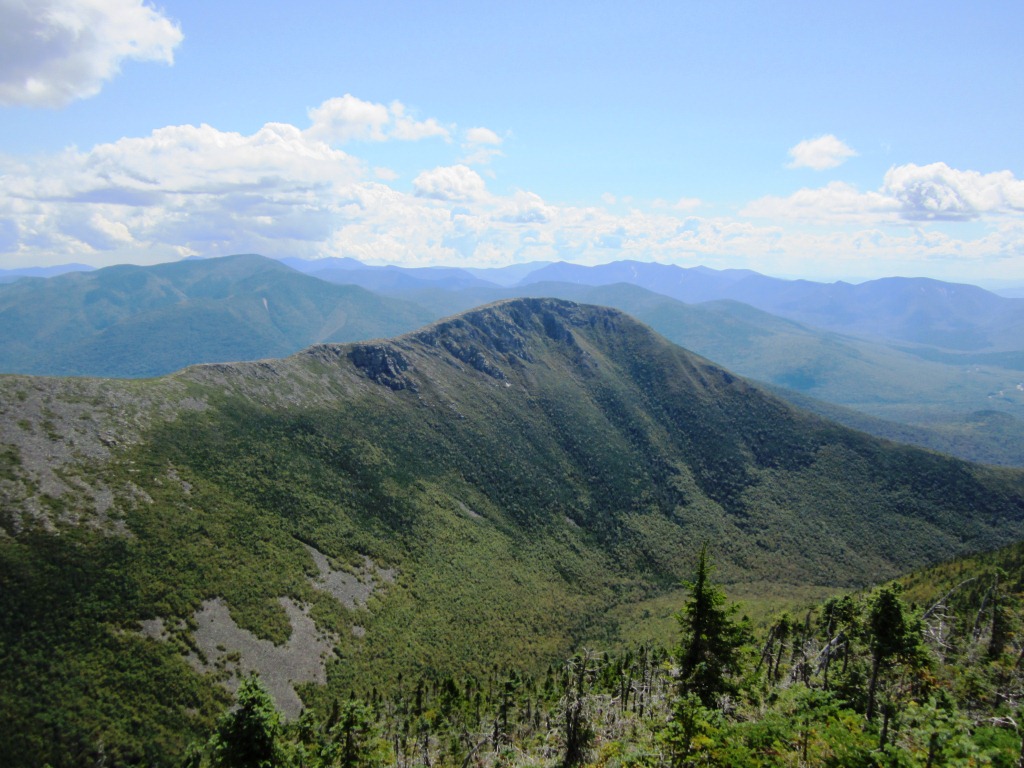 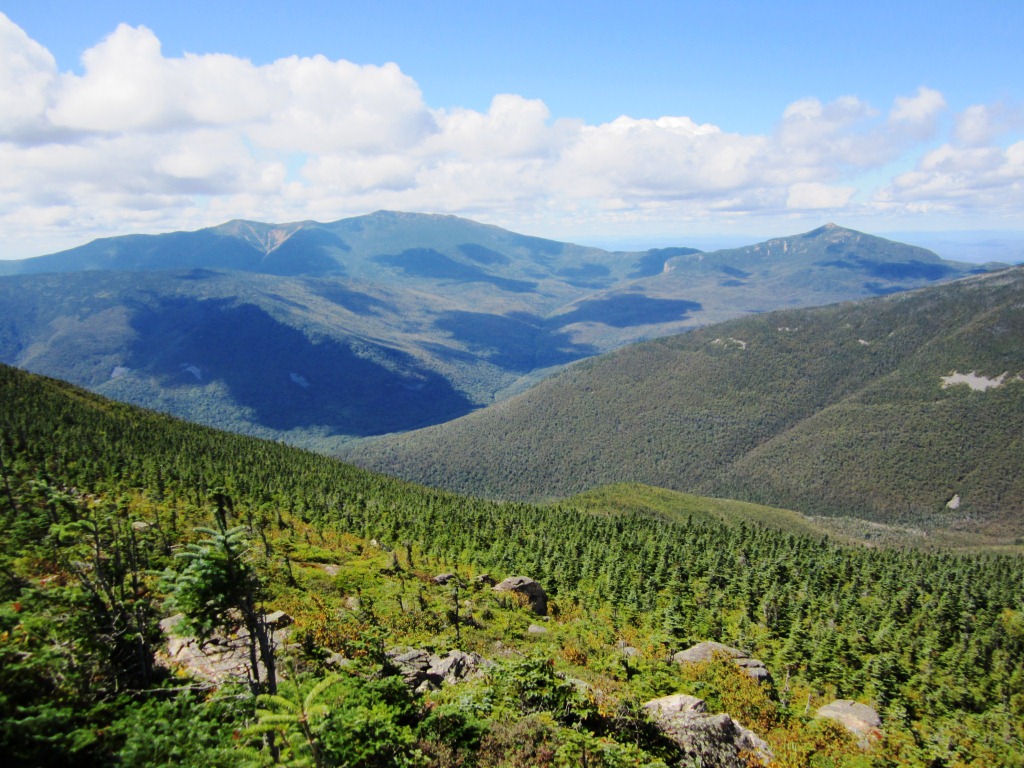 West Bond, like Bond, is not above treeline - it's a rocky knob sticking out of the spruce forest. The 360 degree views were again fantastic. The most unusual view was that of Bondcliffe from the side (left). There was also a great view of Franconia Ridge and Mt. Garfield (right), without West Bond in the way as in the view from Mt. Bond. 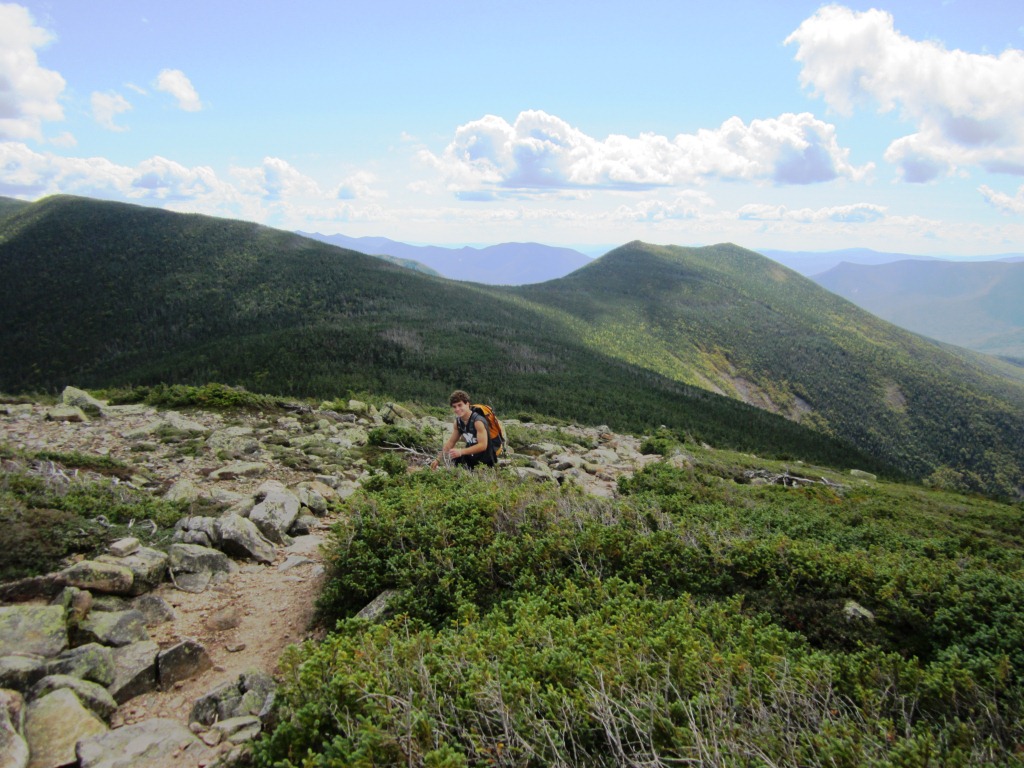 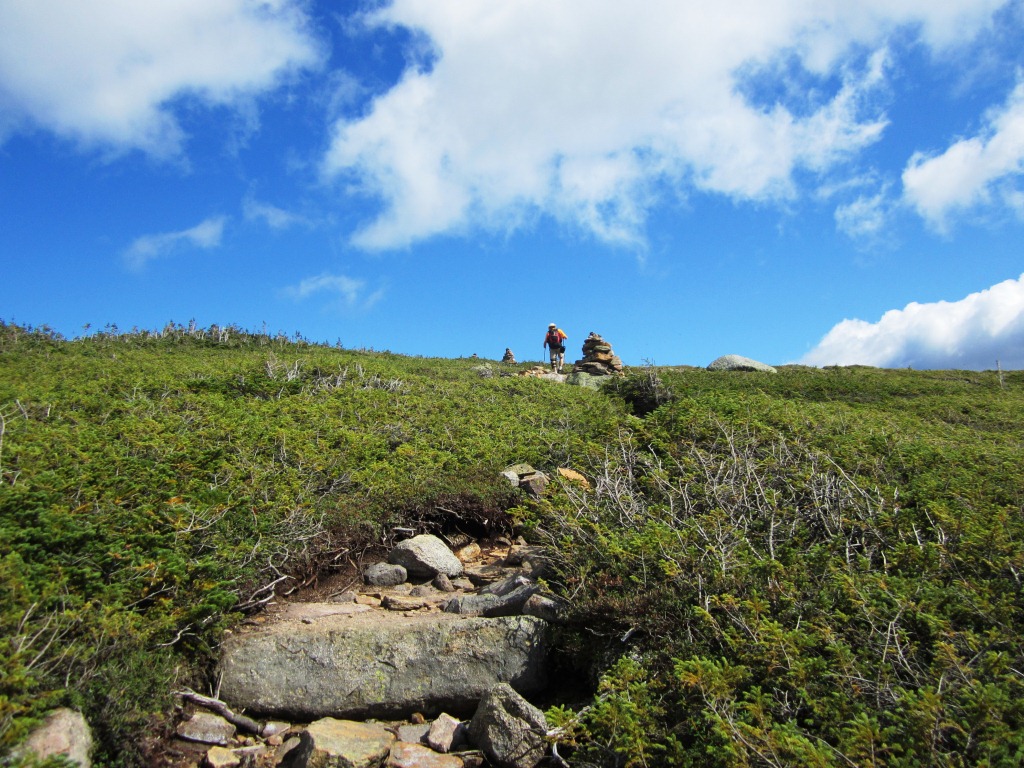 After that we returned the way we came. Back to Guyot with West Bond in the background (left) where we stopped to pick the ripe cranberries that carpeted the trail. This is wonderful hiking among the krummholz (dwarf spruce) reaching out to the sky (right). Somewhere during this hike I lost my AMC 4,000 footers guidebook, and am sorry about this because it's a really great book, with everything you might possibly want to know about each 4,000 footer and then some. But I guess there was symbolism to that - my task done, I didn't need the guidebook anymore! 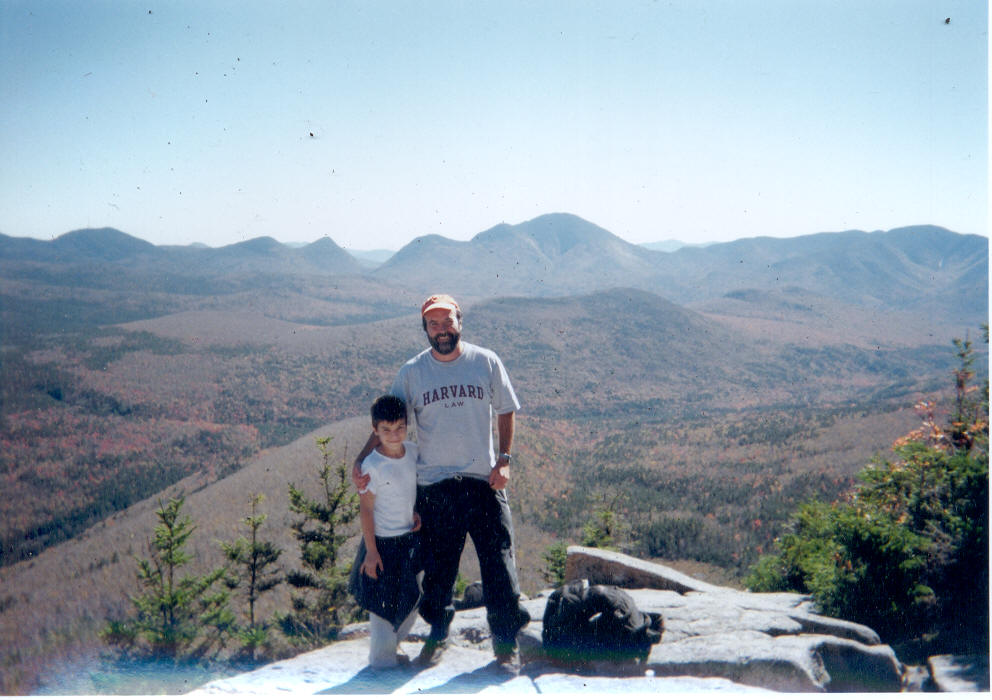 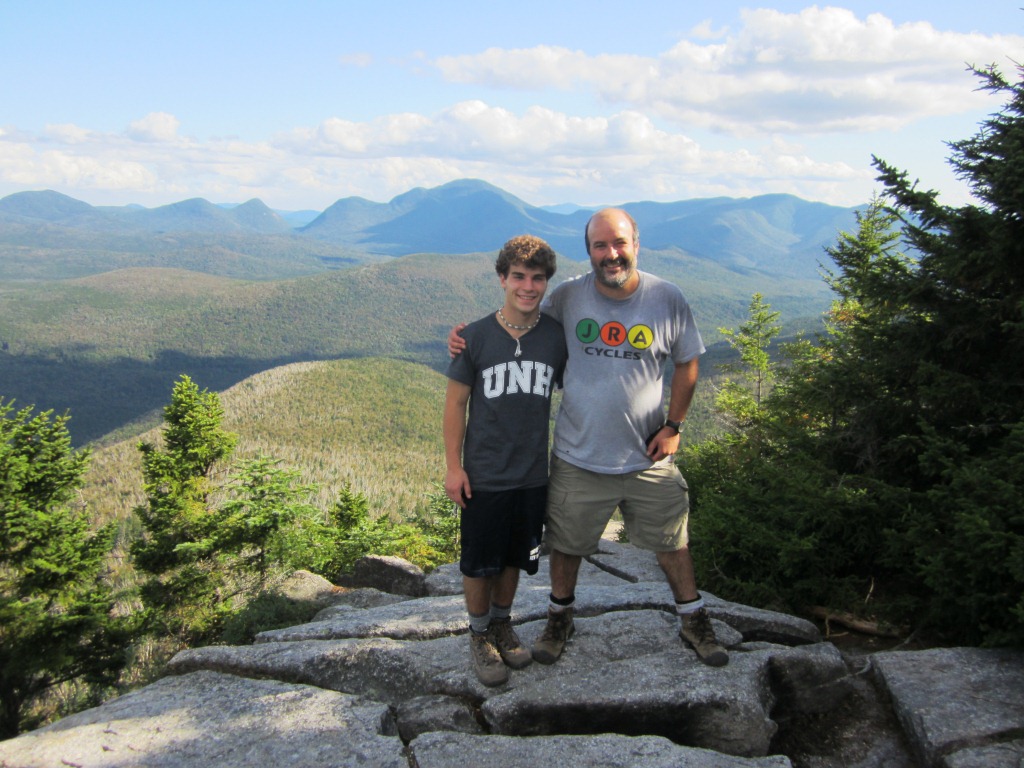 In this manner we got back to Zeacliff, where the views were much better than in the morning. Here was an opportunity that I had waited for a long time - to take a picture with Alex in the same background as when we had first climbed Zeacliff in October 2004 (picture at left - I love this picture so much that it is the background screen on my computer). The result is at right. The views haven't changed and neither has Alex, but I've shrunk. 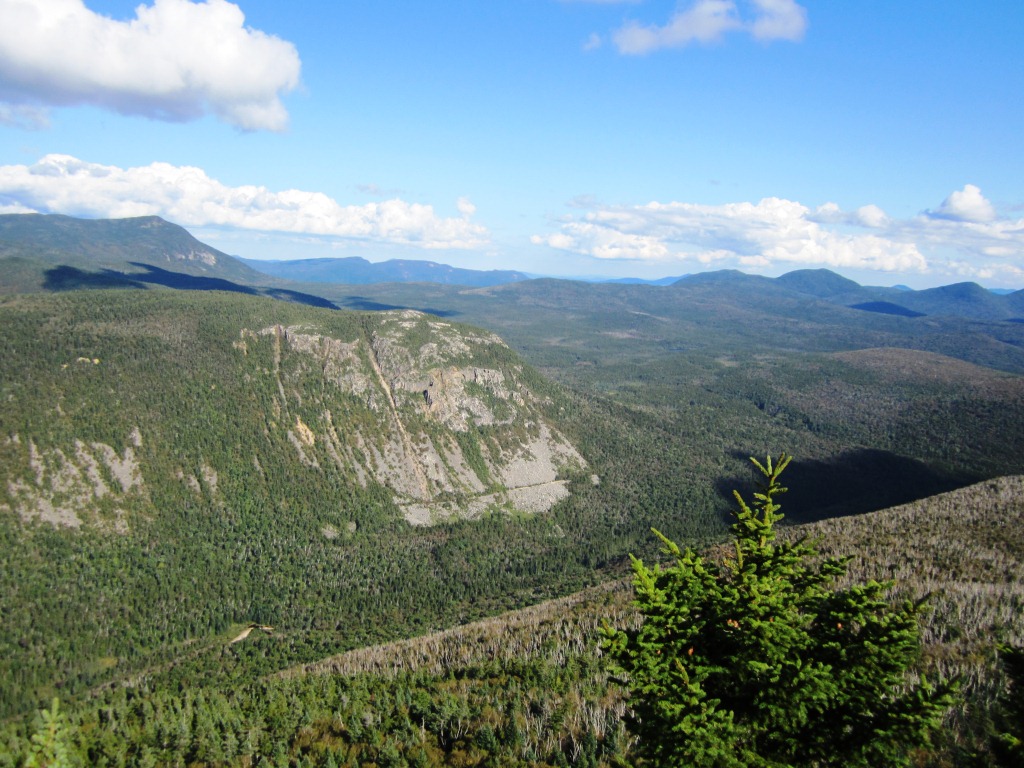 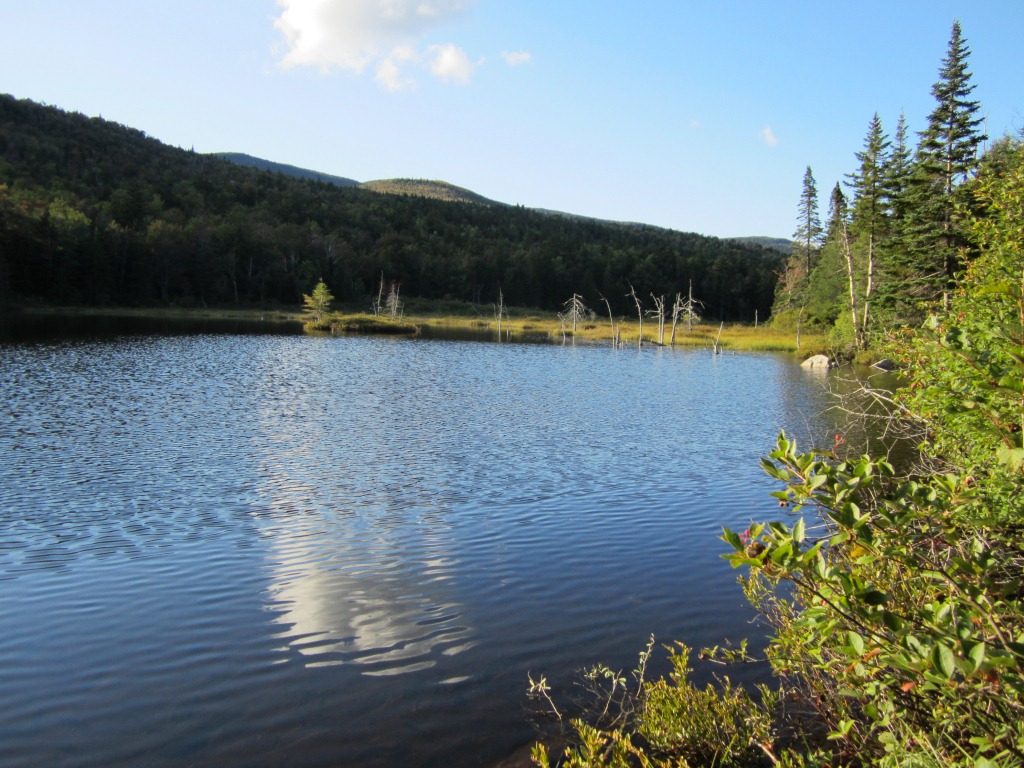 Another item of my fascination with Zeacliff is the view of Whitewall Mtn. (left). There is no trail up Whitewall, but the view from the slide and the cliff must be unique and awesome. Peter identified a narrow slide that we would need to take to bushwhack our way up, and we have this on our to-do list. We stayed up on Zeacliff for 15 minutes to enjoy the views. At some point an AMC-led group of about a dozen people showed up, with the leader declaring to the group "I brought you up here because I thought you would enjoy the view!" and then thirty seconds later she declared "OK, time to go!" and they were gone and we were alone again. We headed back down to Zealand Pond in the evening light (right) for the flat hike out to the trailhead with the first hints of red foliage.