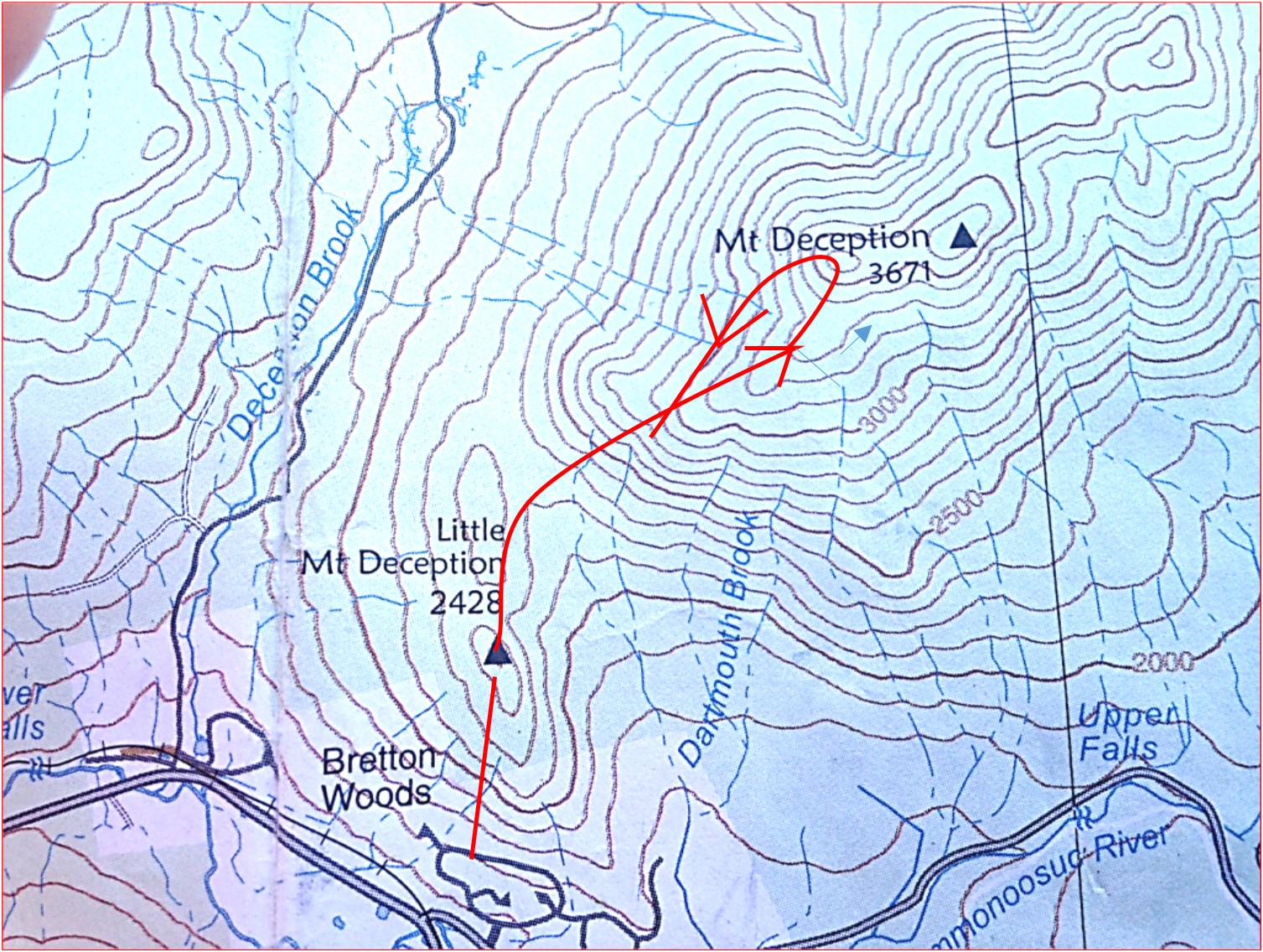 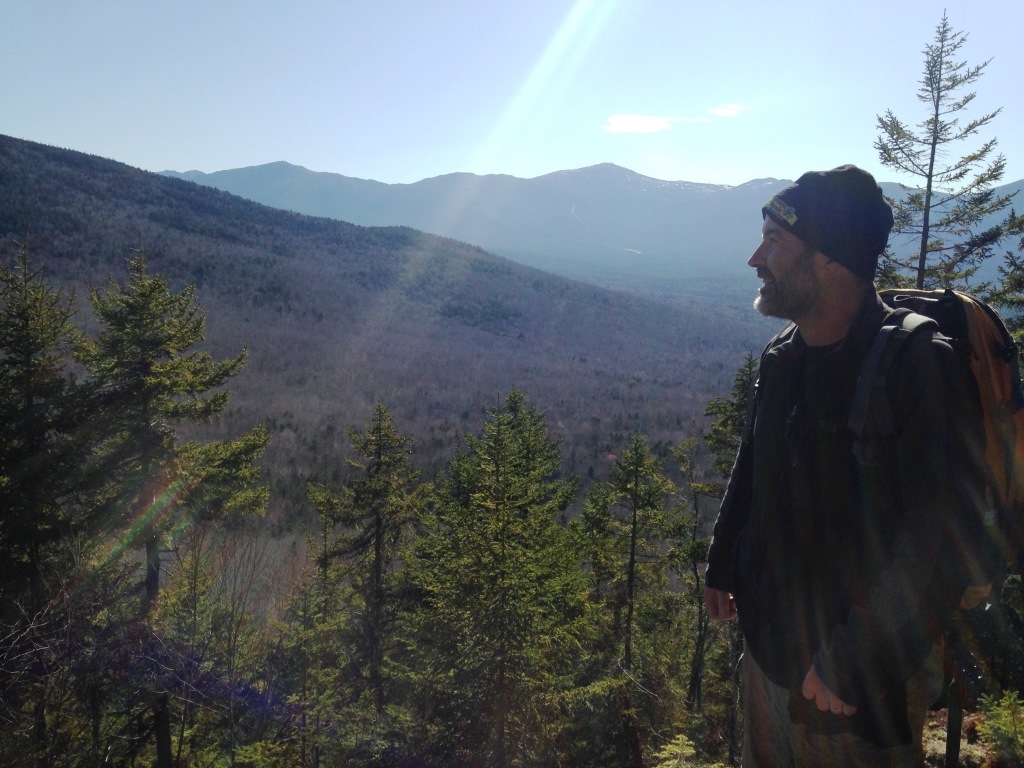 Peter Wyatt and I bushwhacked to Mt. Deception (3,670') walking out of our homes in Bretton Woods and into the wilderness. Conditions were perfect: not a cloud in the sky, no leaves on trees, snow mainly gone, wet areas still frozen. The topo map at left shows our route. We had previously climbed Mt. Deception from Cherry Mountain Road, which is a much shorter trek but requires a drive. 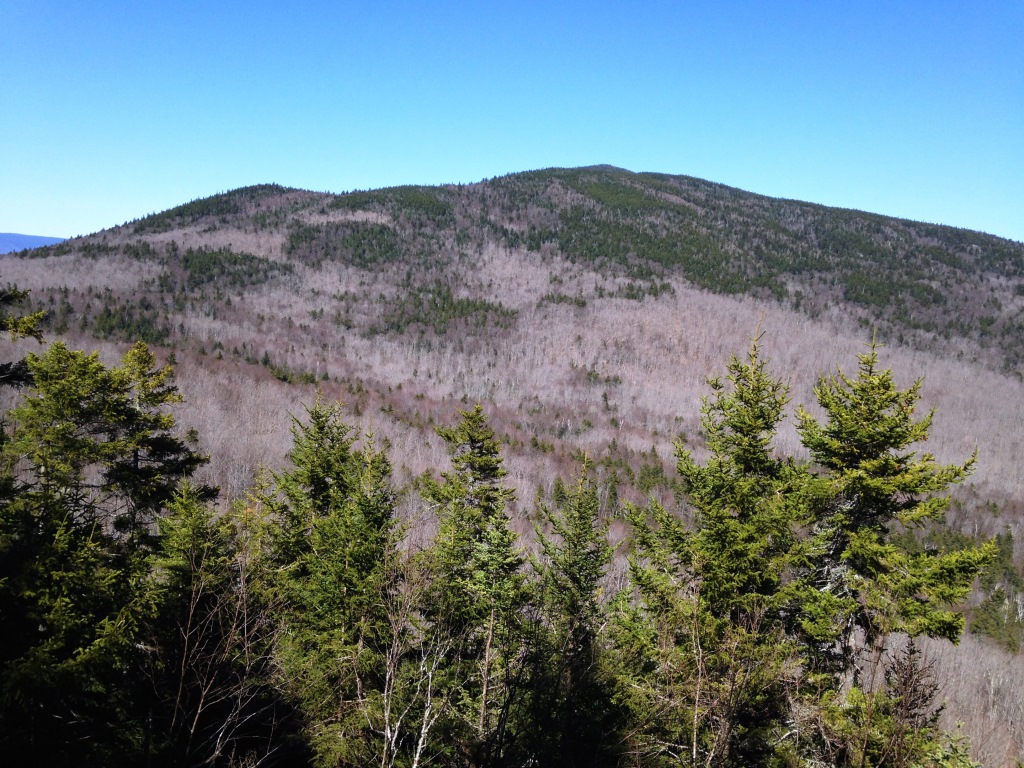 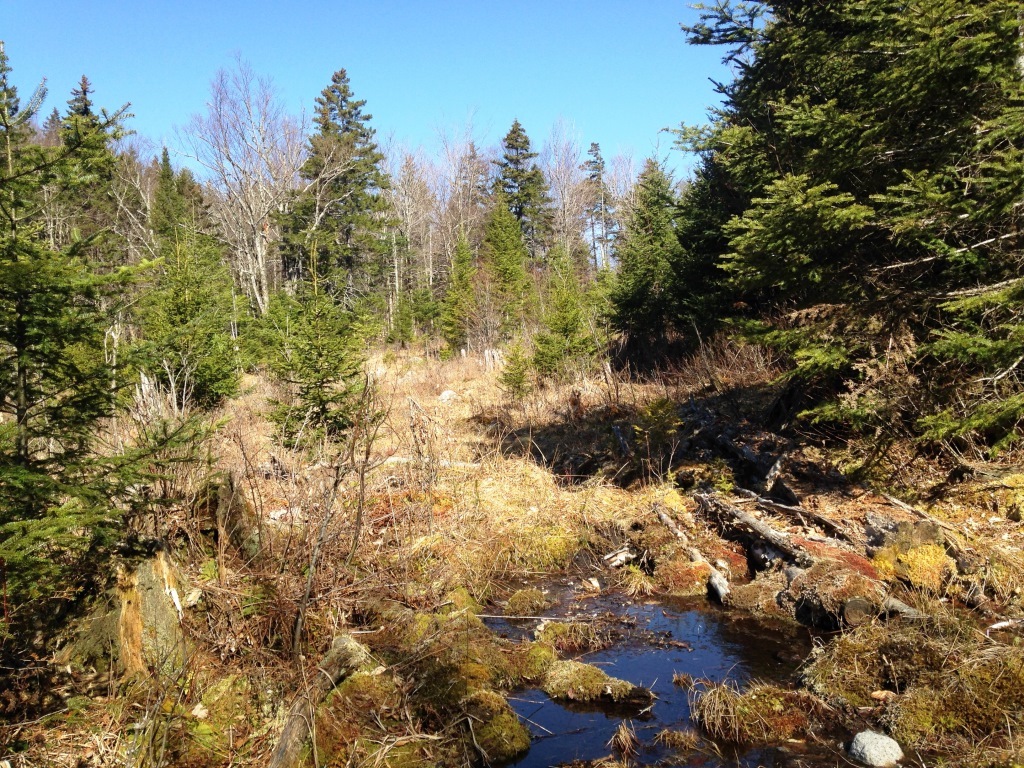 We started by climbing Little Mt. Deception (2,430') to which Bretton Woods hikers have made a well-worn herd path. The path starts from the connecting road between the Mt. Washington Place and StoneHill condos - coming for MWP, look for a clump of white birches on your right and the first SH building below you on your left. The path is flagged all the way up. Little Mt. Deception is just a 40-minute climb and it's a gem, you feel like you're on top of a real mountain. There's a ledge with great views of the Presidential Range (above right) and of the West peak of Mt. Deception (left). Mt. Deception actually has two peaks, West and East, the East peak being slightly higher than the West. On our previous bushwhack we had bagged both the West and East peaks. This time we were starting from much further away and would be content with the West peak. 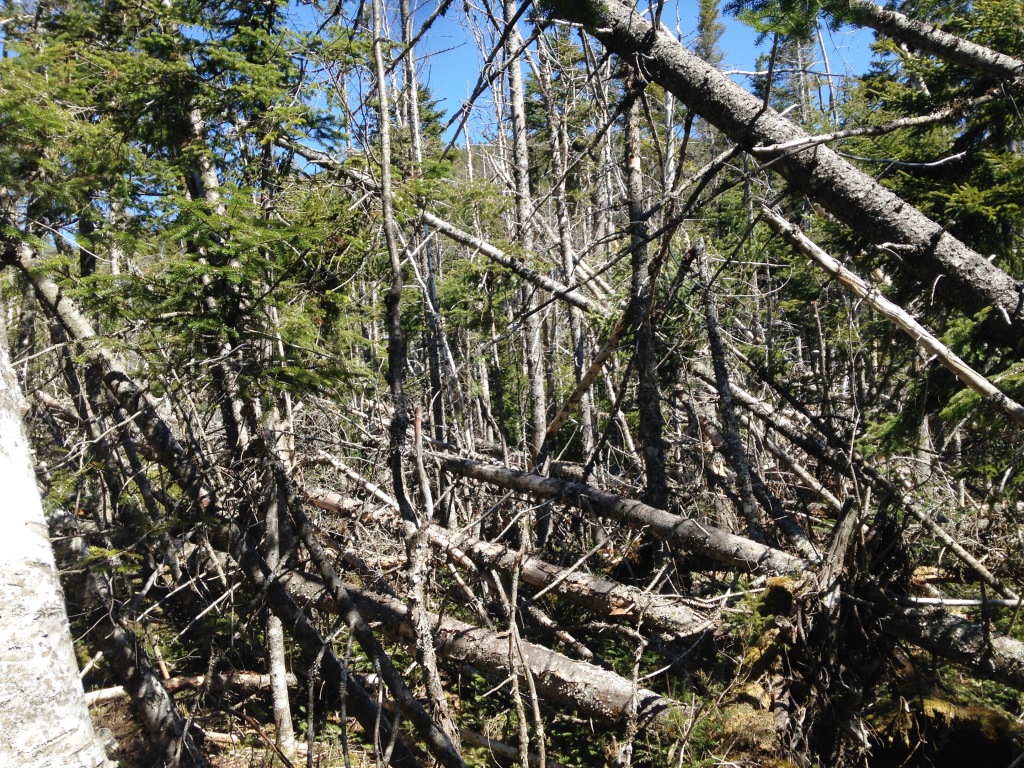 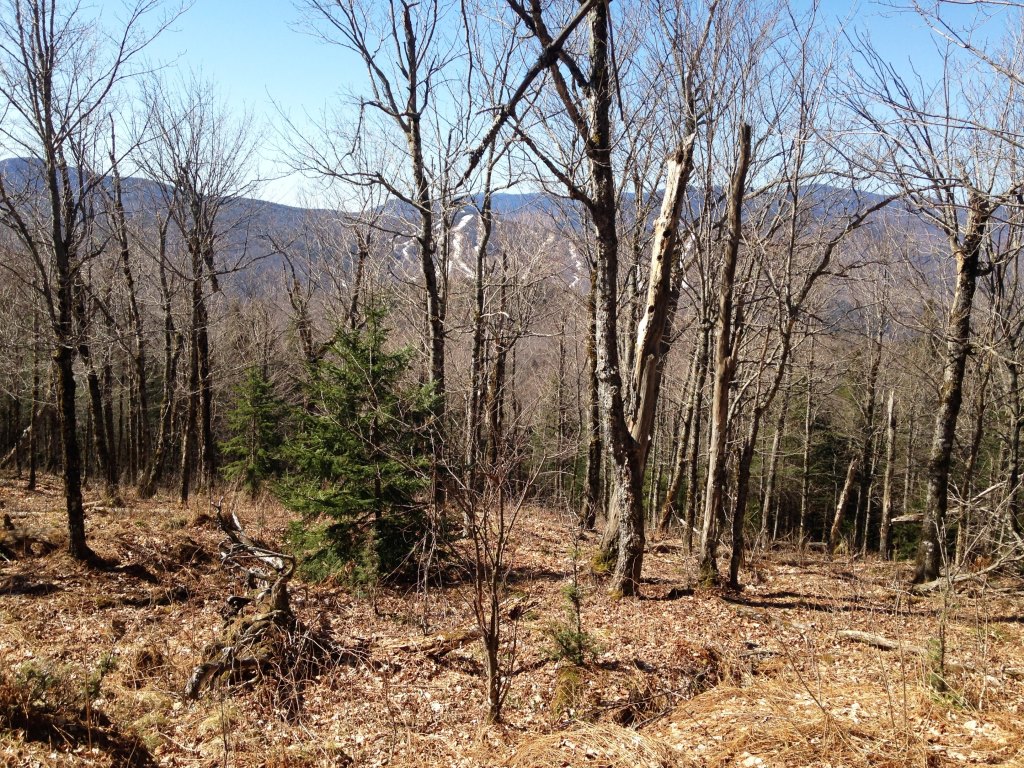 From Little Mt. Deception we started to descend a well-defined trail on the other side. Soon the trail forked. The left (main) fork heads down and becomes an ATV trail to end up at the Mt. Deception camping area on Cherry Mountain Road, from which you can walk back to Bretton Woods - a nice loop. Here we took the right fork and the trail soon fizzled out. At that point we headed north, staying on a shelf at 2.250' with a visible hill to our left and a steep descent on our right (see topo map). This was generally easy going through a deciduous forest. We ended up in a swampy area at the headwaters of Dartmouth Brook (above right). From there the peak was to the northeast and we just had to climb. The trick was to find open deciduous forest, because spruce thickets or masses of blowdowns can be almost impenetrable (left). At 2,500' we found an amazing park-like open forest with views of Bretton Woods to the south (right). 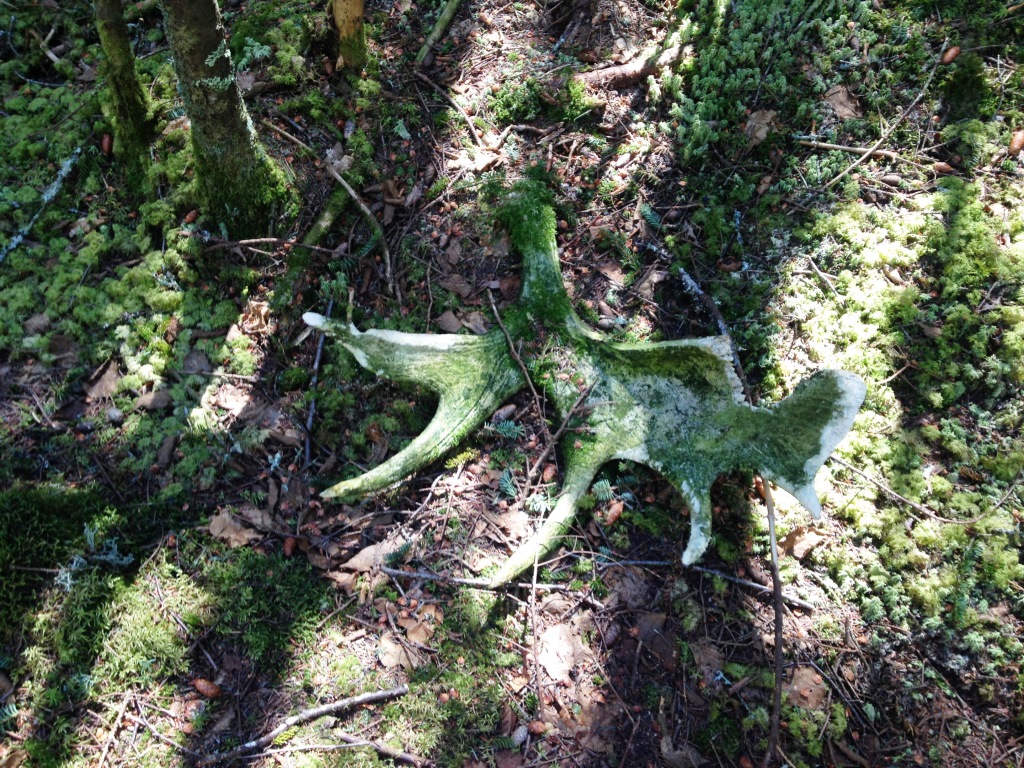 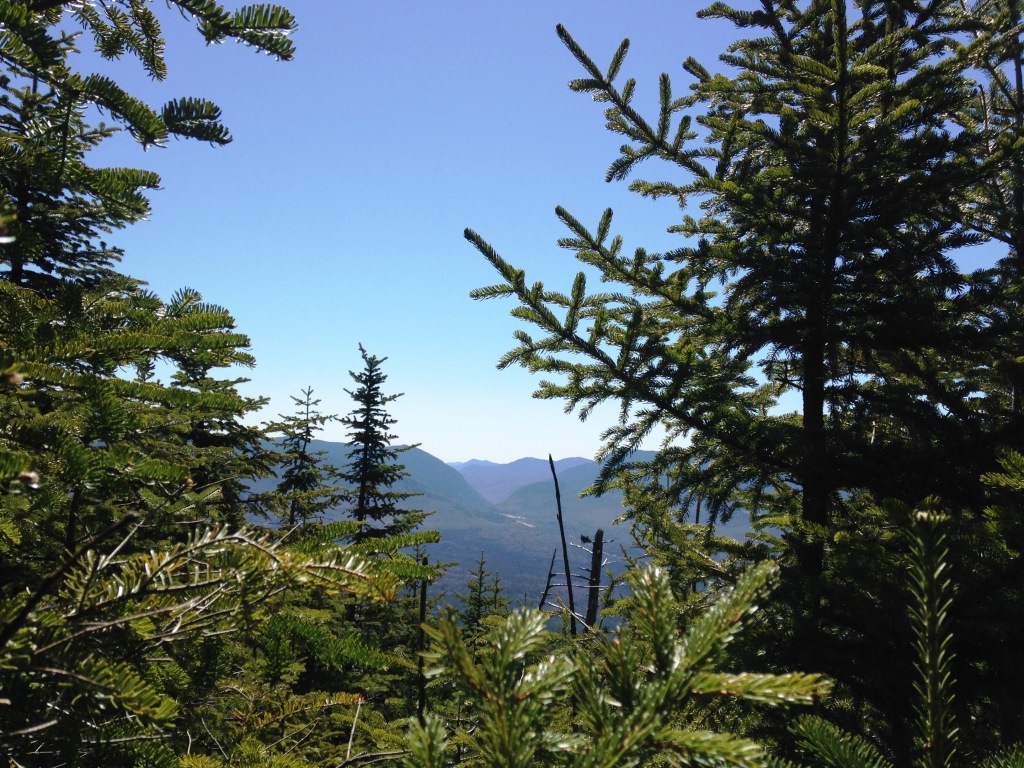 At the top edge of this open forest we headed on a northeast course straight to the summit. That turned out to be a mistake because the spruce and blowdowns made the going tough. There were also a lot of wet areas, fortunately frozen. The west side of Mt. Deception is far more open and dry, as documented in our previous bushwhack. In any case we slogged on, with varying hardship, following moose tracks when we could, and at some point we found moose antlers on the ground (left). The last 100 feet were totally awful through almost impenetrable spruce. Approaching the top and still tangled in a mess of spruce I got a good view of Crawford Notch (right). 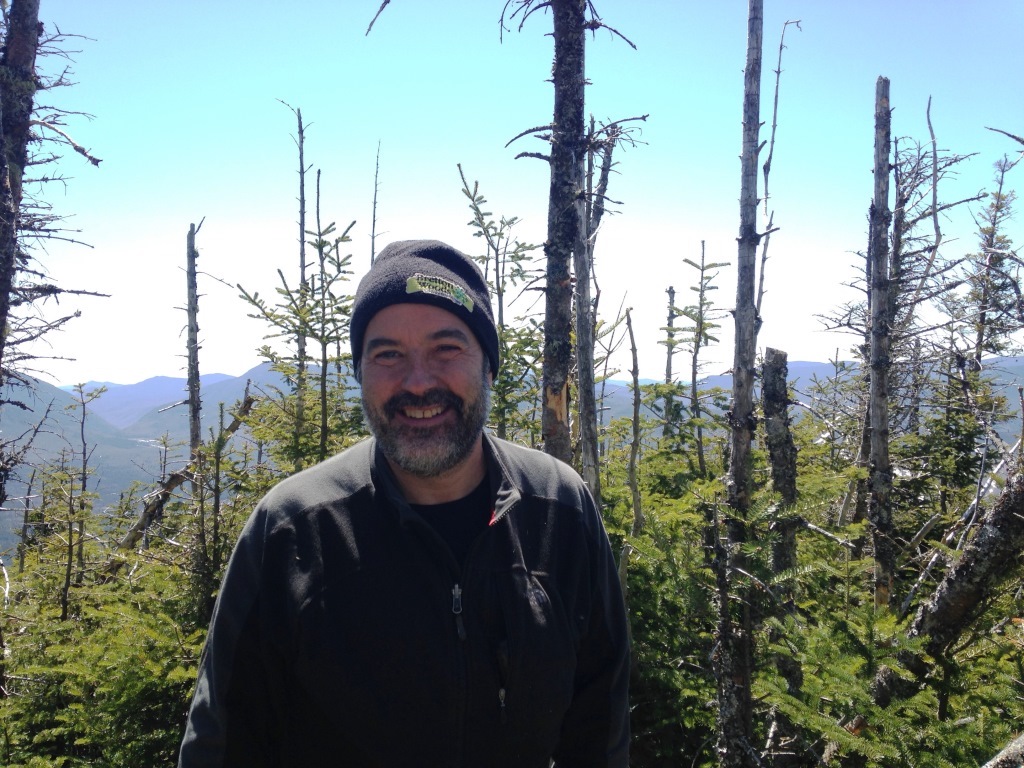 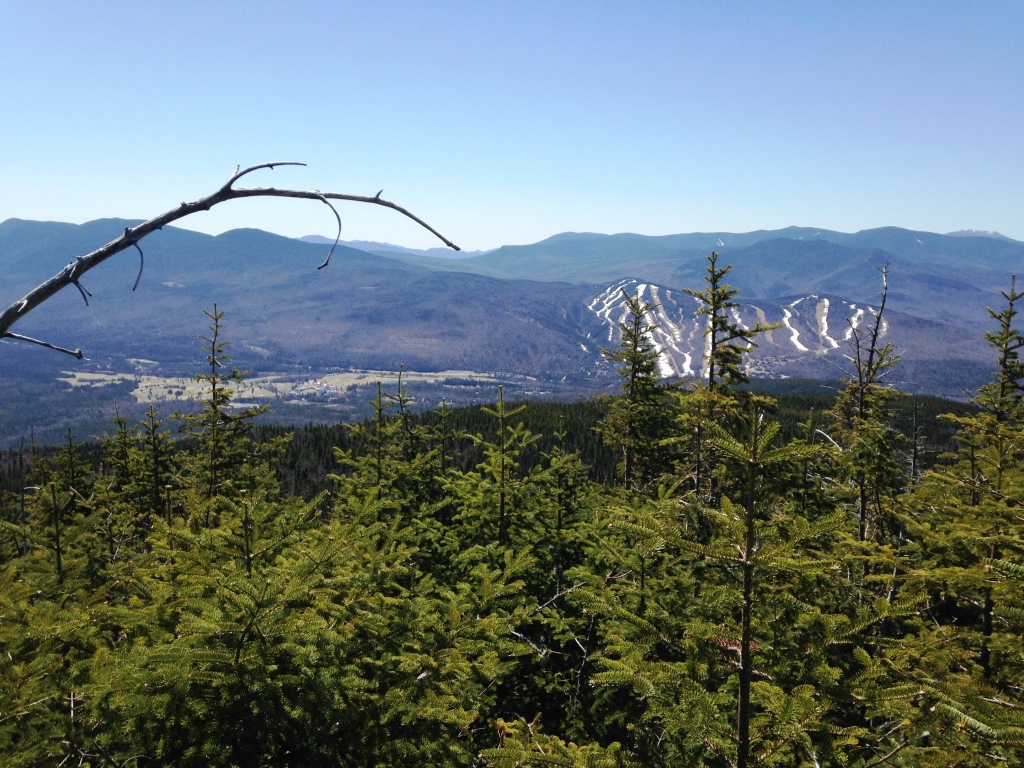 At the top we found two nice surprises that we had missed on our previous climb to West Deception because we were on the west side of the summit plateau and dealing with a mess of blowdowns. First is that West Deception has a well-defined rocky peak, on the east side of the summit plateau (here's me on the summit at left). Second, there are actually some nice (standing) views south to the Bretton Woods ski area (right), east to the Presidential Range (below left), and north to East Deception and Mt. Dartmouth (below right). The rocky peak made a good lunch spot. 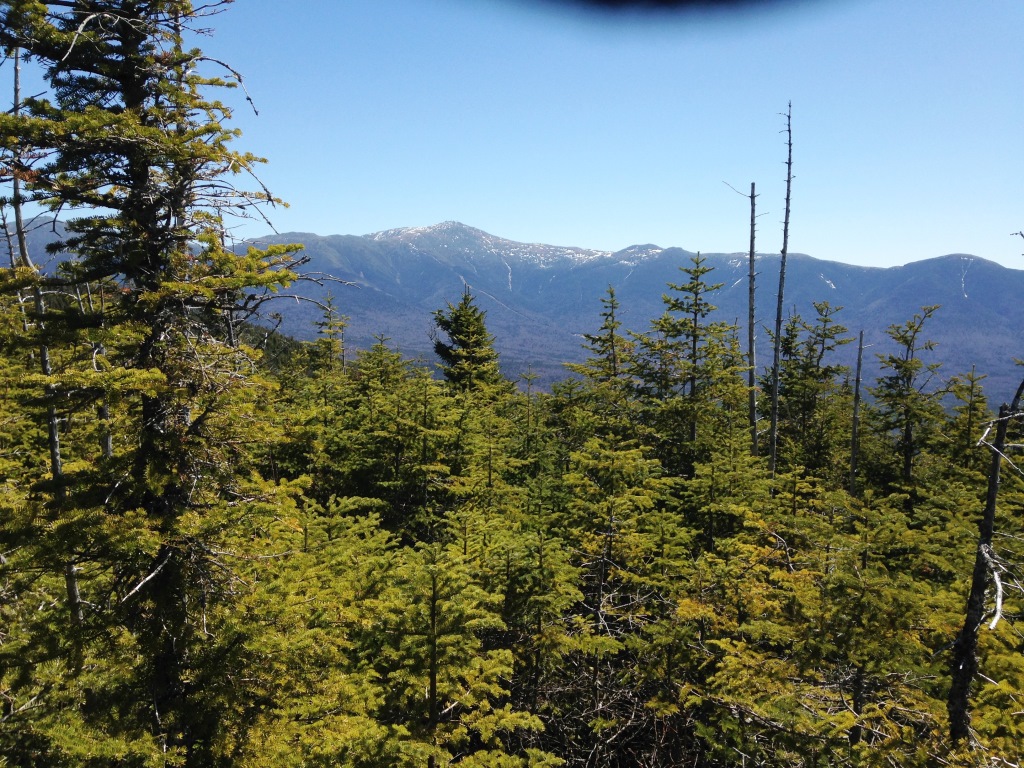 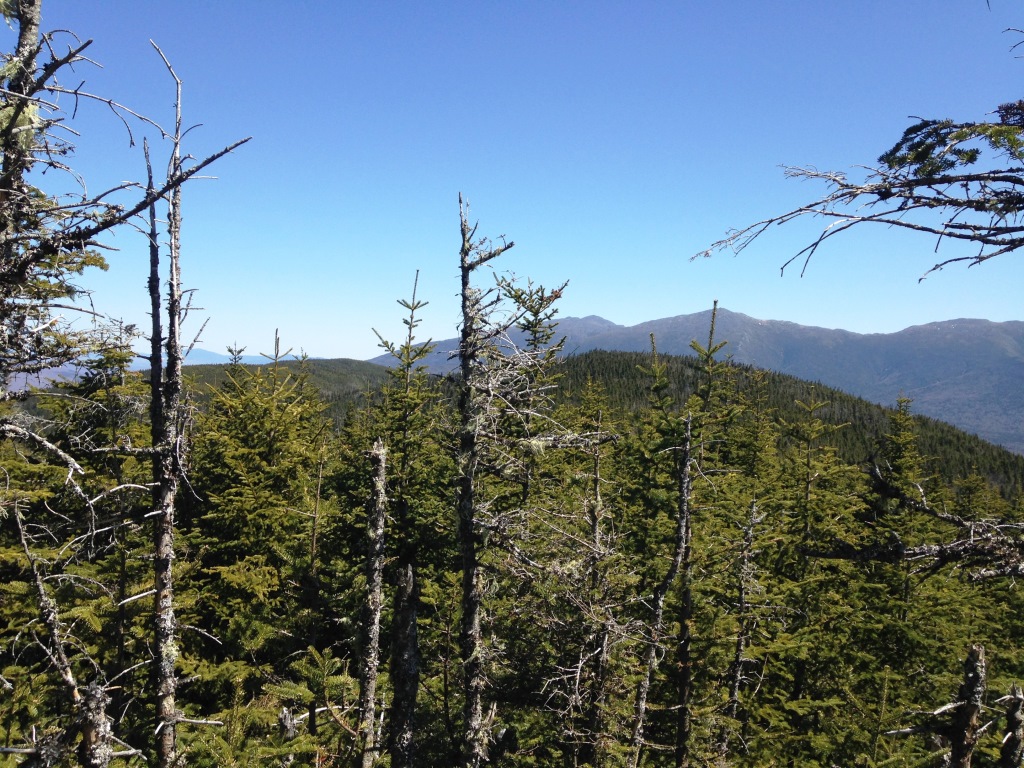 On our previous bushwhack we had taken the much shorter western route to West Deception from Cherry Mountain Rd. and gone on to East Deception, which is slightly higher than West Deception and has the summit canister. We couldn't find a summit canister on West Deception, even though we knew for sure that we were at the summit. We headed back down but deliberately began the descent on the west side of the summit, the route from our previous bushwhack, and this was much easier going - spruce forest but very open. We then angled to the southwest to end up on the shelf where we had come from at 2,250'. Somewhere in the woods we found a beautiful sheet of ice (below left). 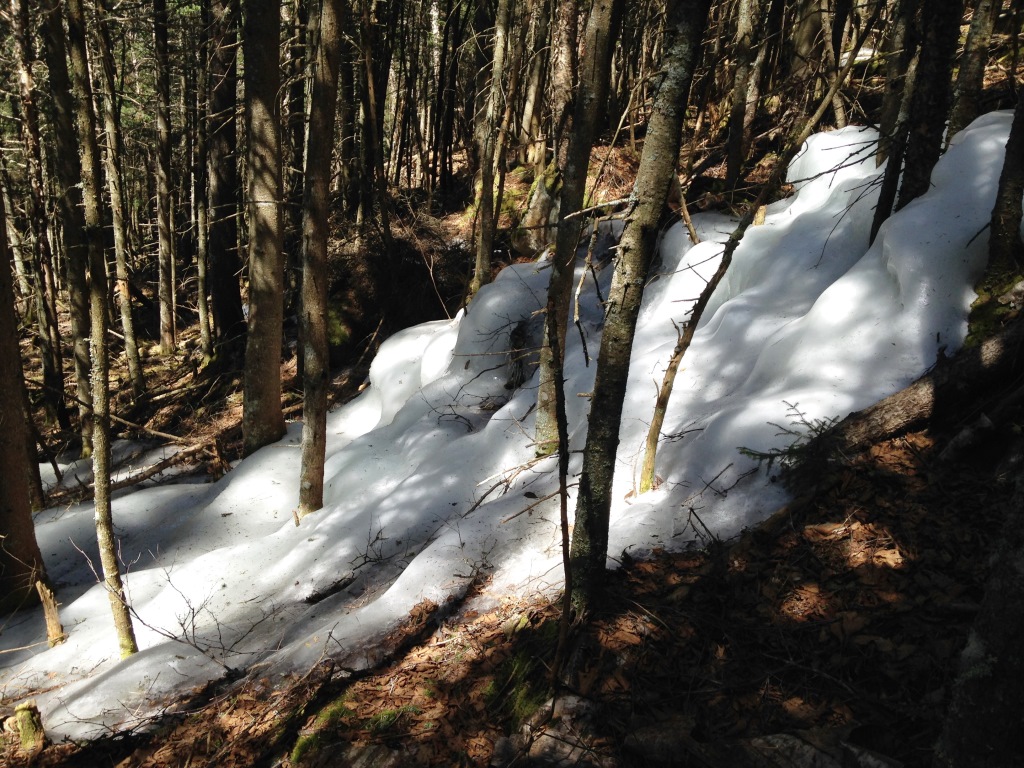 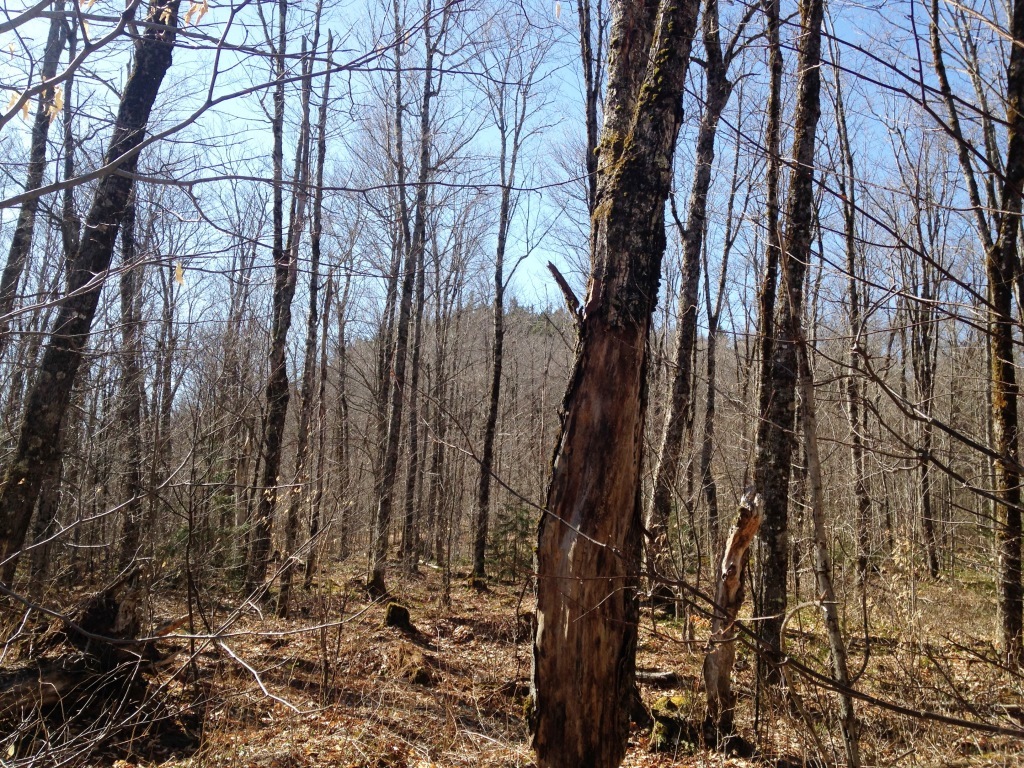