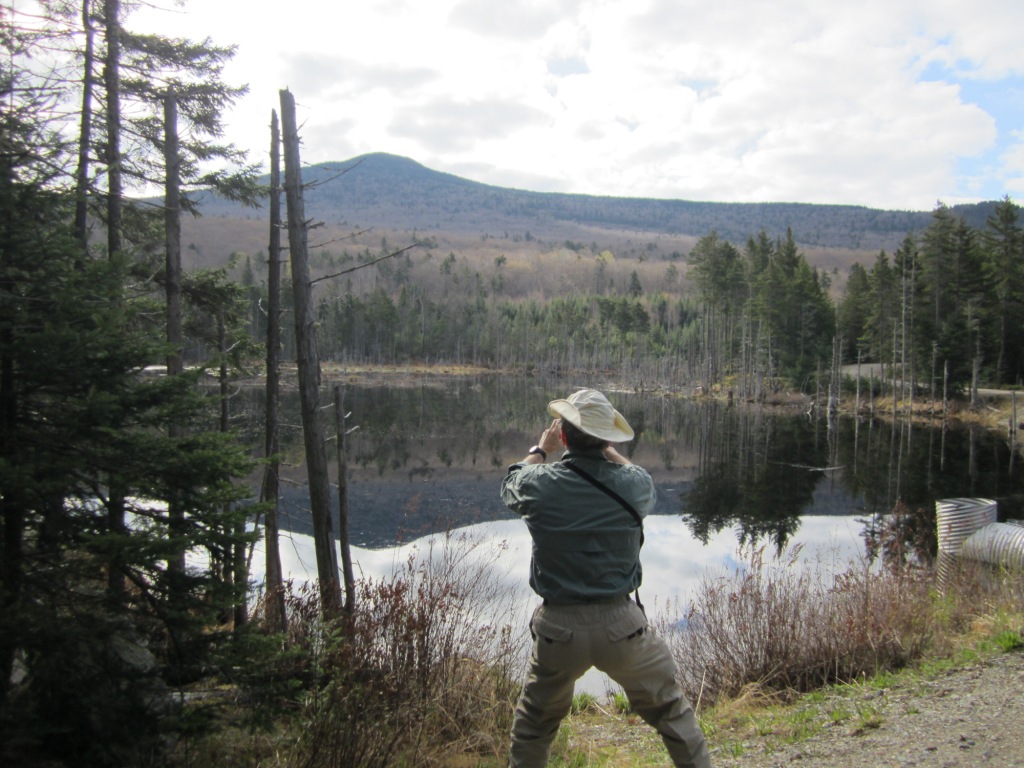 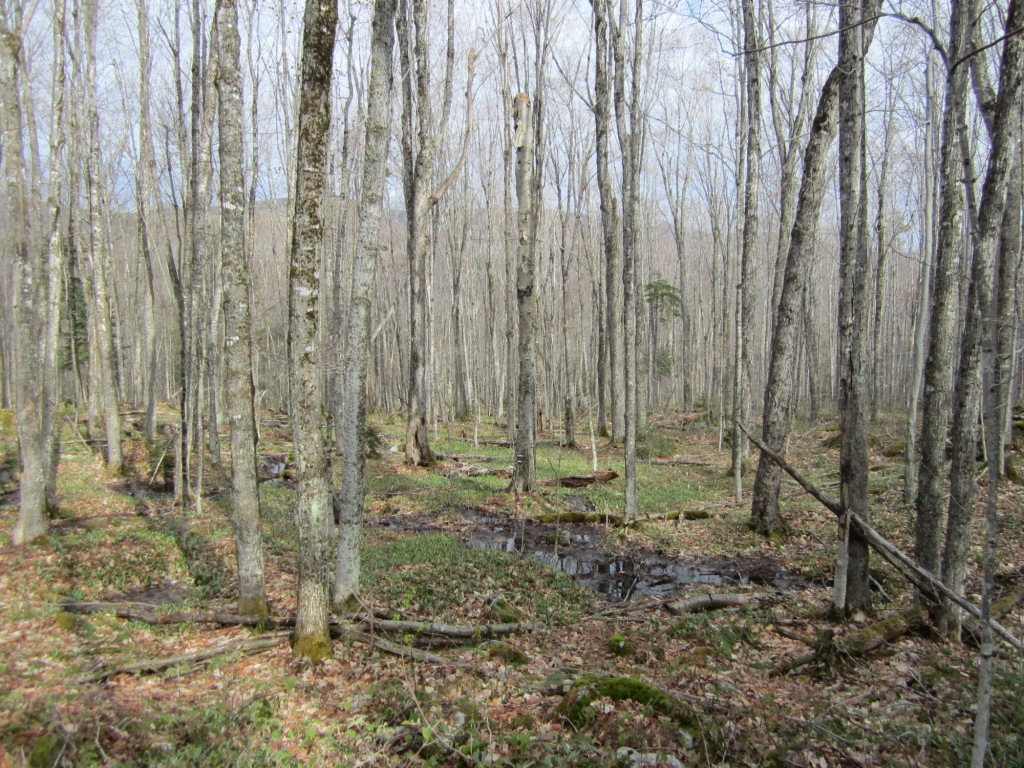 Mt. Deception (3,671') on the north side of Bretton Woods is one of the highest trailless mountains in New Hampshire. It consists of two peaks, West and East, separated by a small saddle. East is slightly higher than West. Peter Wyatt and I decided to bushwhack it before leaf-out would make the going and orientation more complicated. We drove up Cherry Mountain Road, where a pond near the height of land provides a great view of Deception (left). We parked just before the pond at Campsite No. 7 (1,950') and from there went straight into the woods towards the top of the mountain, starting in an fairly open maple-birch forest at a moderate grade and with a number of small streams (right). There was no human trail of any kind but as you can see from the photo on the right there was no way to get lost - we could either see Mt. Deception or let the topography guide us. 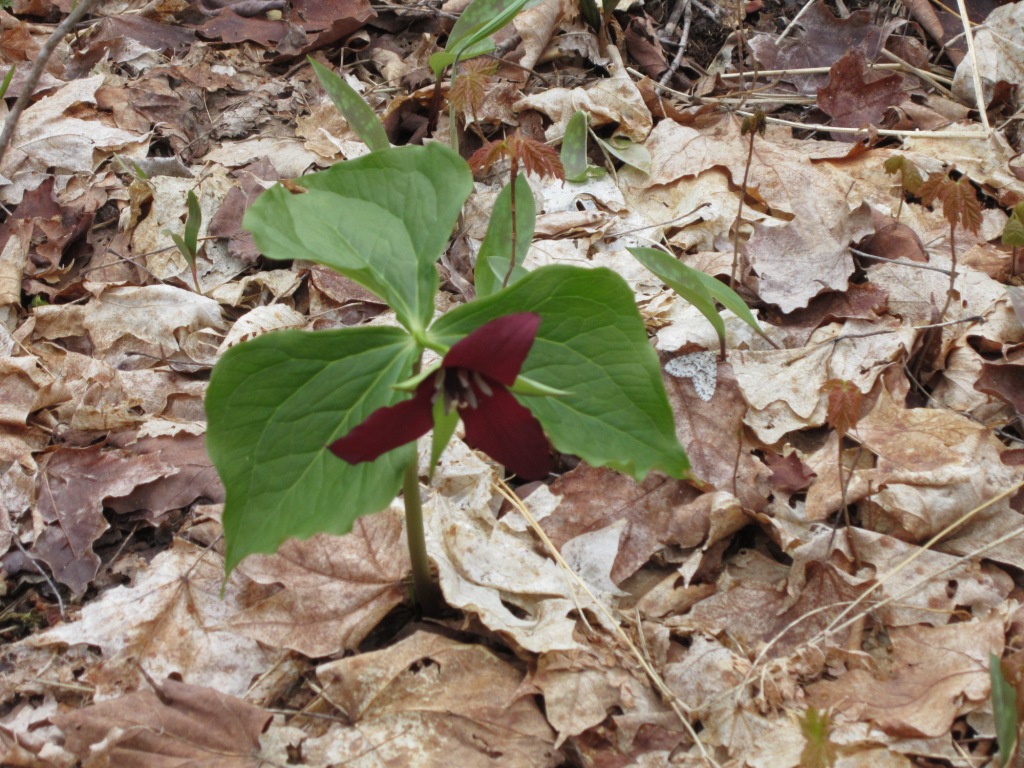 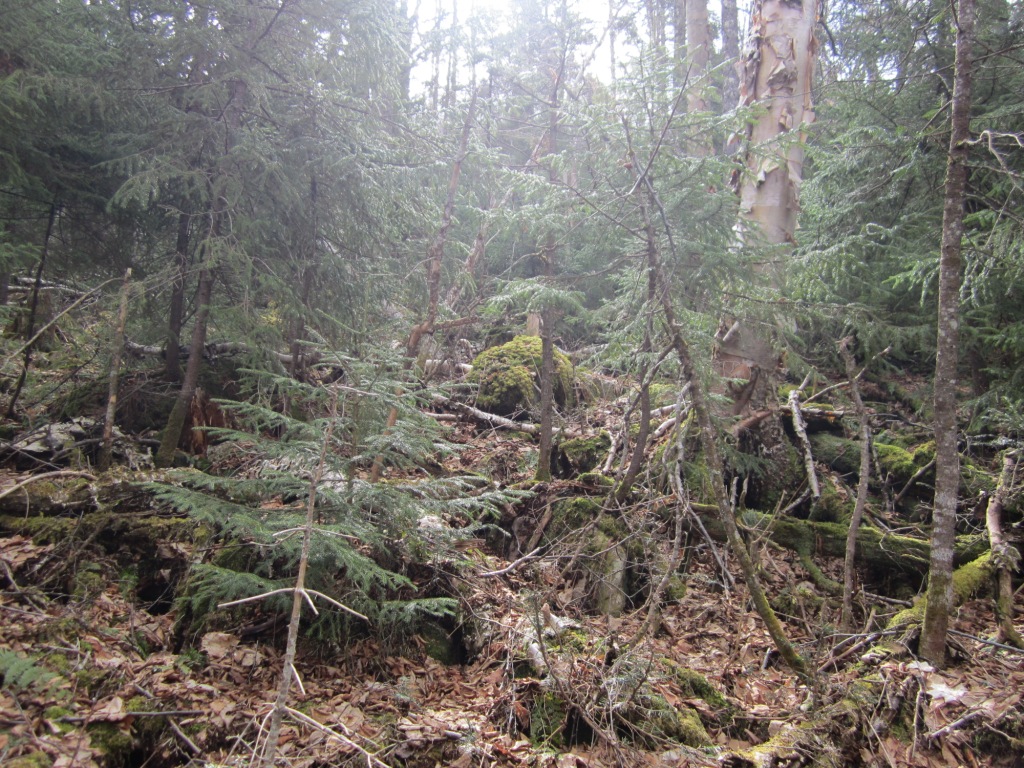 The initial going was thus very easy and pleasant. The forest floor was carpeted with pretty flowers in bloom such as this red trillium (left). At 2,700' the spruce forest started, and this can be really bad news because the spruce is much thicker and there are a lot of downed trees. Sometimes we just had to grin and bear it through tough passages (right). 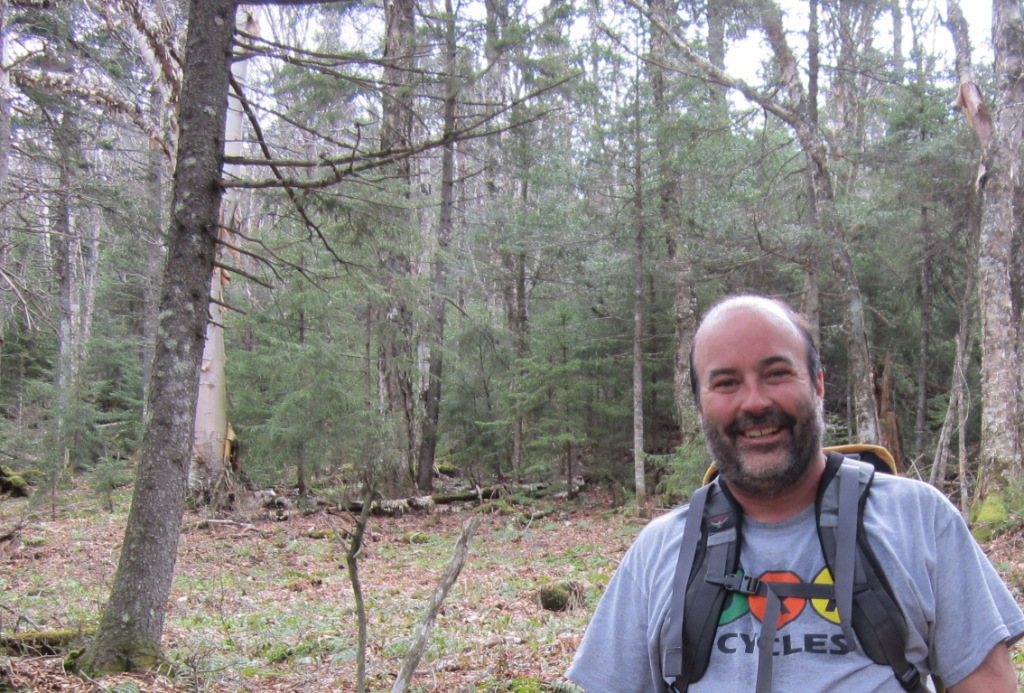 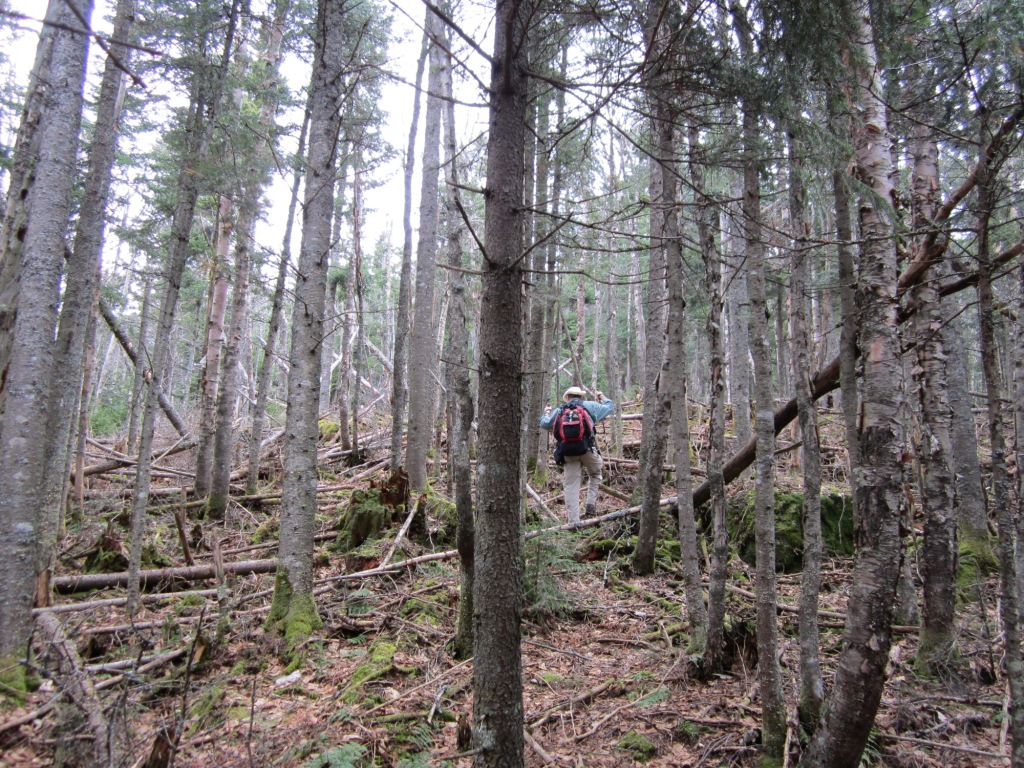 Often, however, the spruce thickets gave way to large clearings where walking was a charm (left). We found a few persistent patches of ice in cool spots under downed trees. Moose droppings and moose tracks were everywhere - I had never seen such dense moose activity. We hoped to catch sight of them but no luck - although we did hear some loud thrashing noise ahead of us at some point. We did use the moose poop to guide us, figuring that the moose knew the easiest way up. Eventually at 3,200' we got to the serious part of the climb as the grade steepened through a mature spruce forest, but the canopy was open enough that there was no particular difficulty (right). 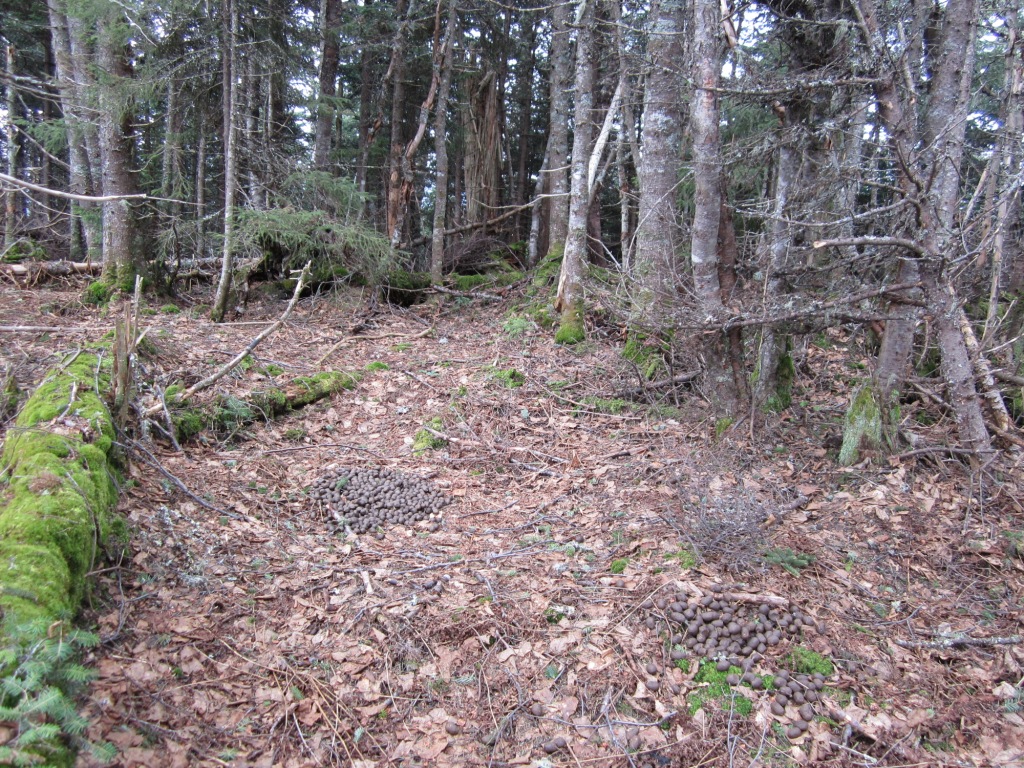 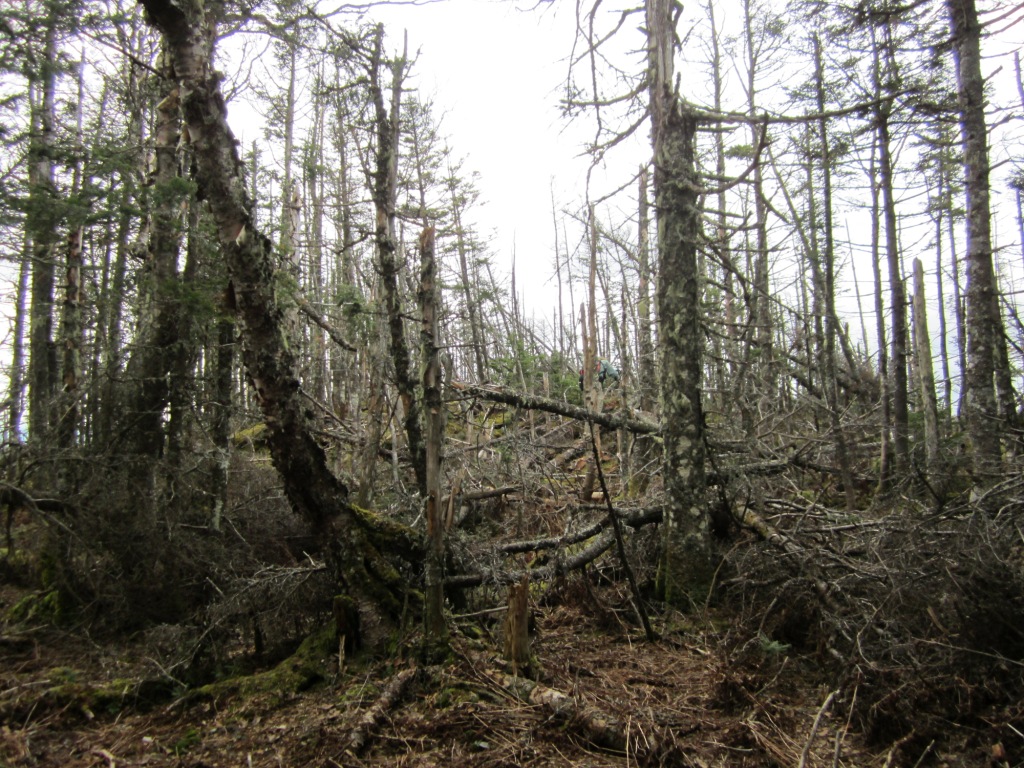 In this manner we followed the moose poop along some kind of ridge all the way to the top of West Deception (left, check out the piles on the ground). The top of West Deception is a jumbled mess of spruce trees, most of them dead but standing (right). There is some view through the trees of the southern Presidentials, the Bretton Woods ski slopes, and the Mt. Washington Hotel. Nothing great. Below left is a terrible picture of me but which shows I was there. 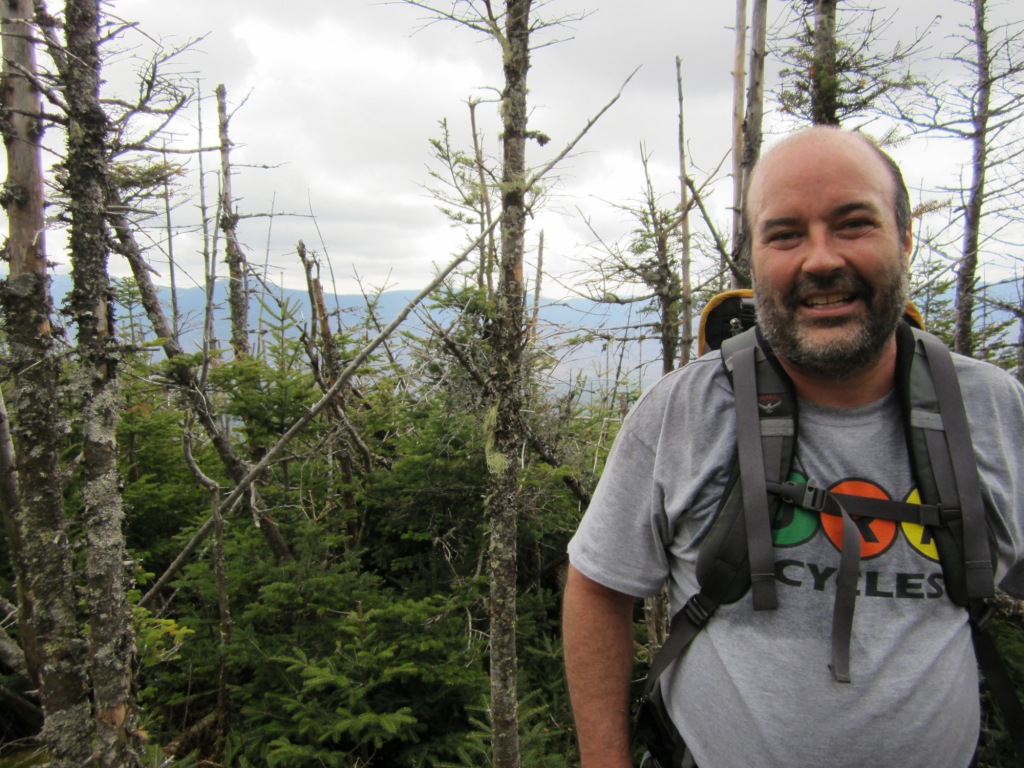 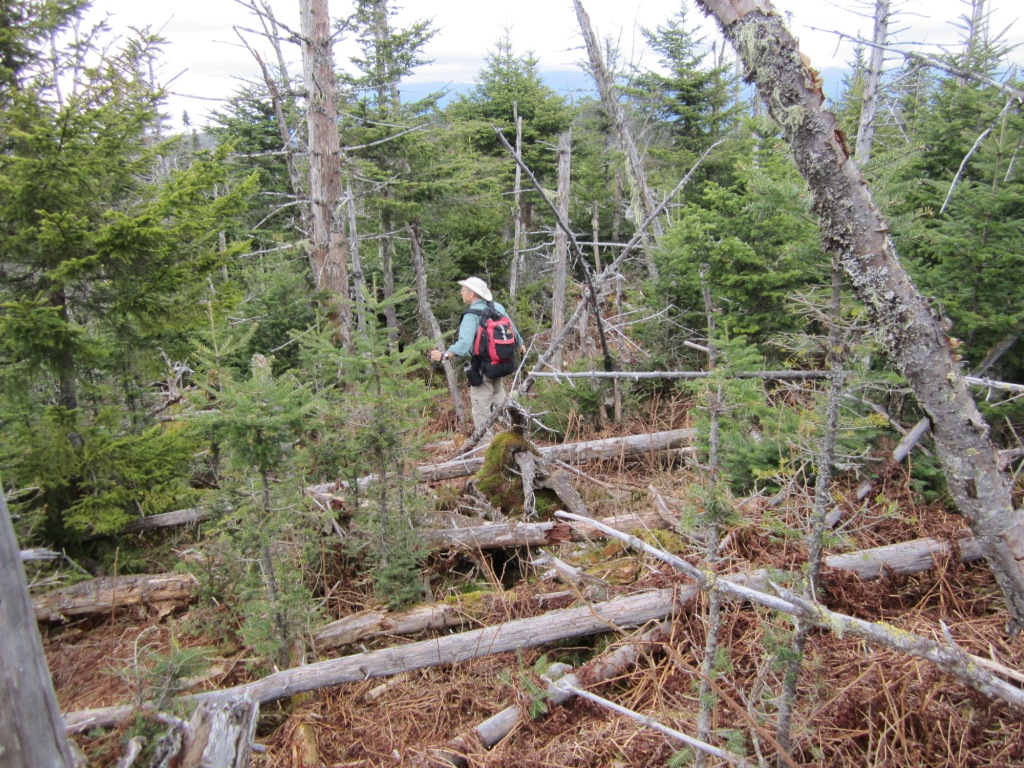 From West Deception we dropped down to the saddle between West and East, through thickets of spruce and some fairly open areas that seemed to have been flattened by moose (right, near the top of W Deception). It's interesting that the moose like to climb to the top of mountains. I read somewhere that it's because their bodies do not adjust well to warm temperatures - so in the summer they go for the heights. It might also have something to do with escaping bugs. 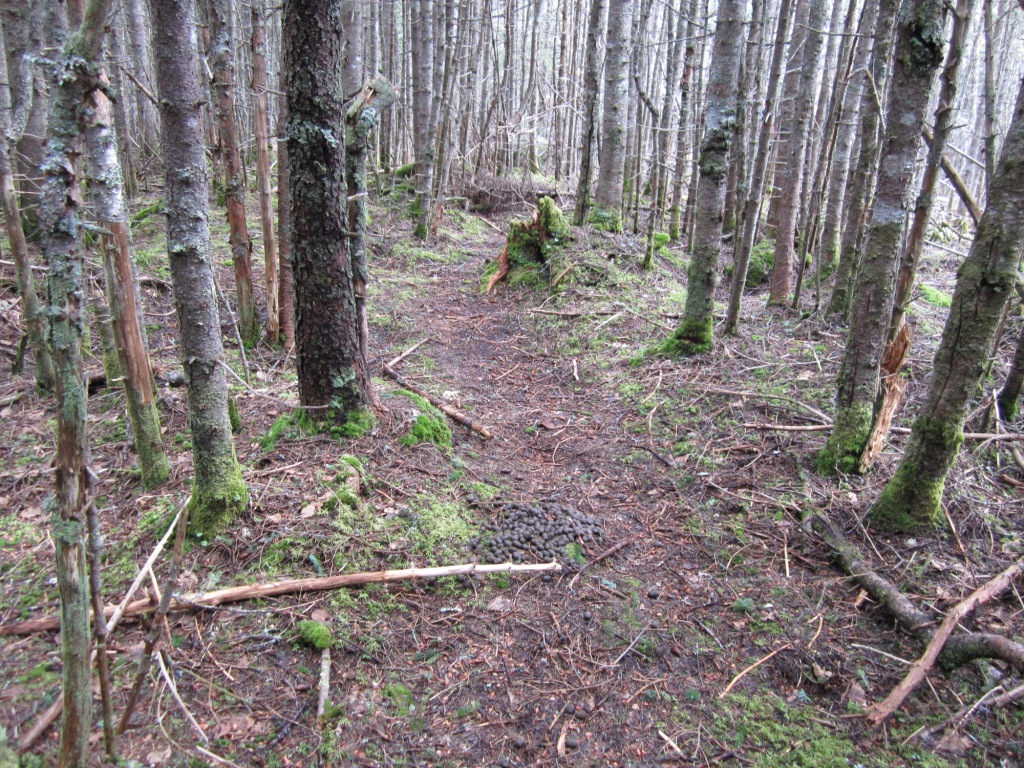 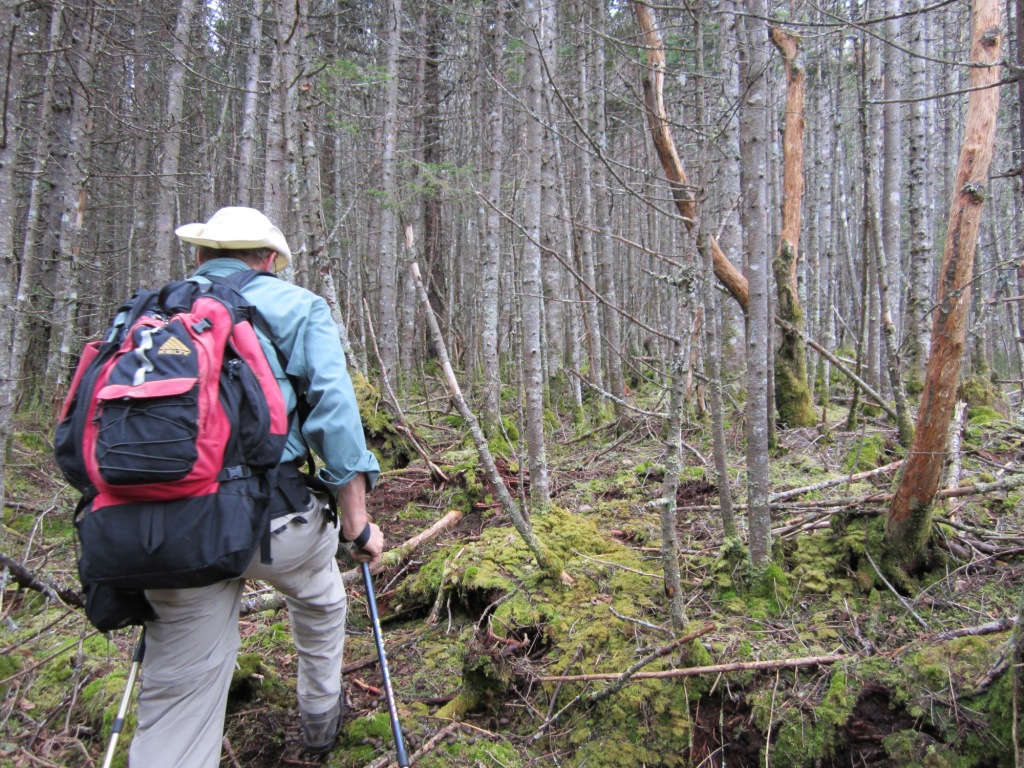 As we approached a saddle we found a semblance of a human trail, the only one we would find all day (left - notice again the moose droppings) but we lost it as quickly as we found it. The saddle was a mess of downed trees, but the subsequent climb up E. Deception took us through a reasonably open forest of mostly dead spruce (right). 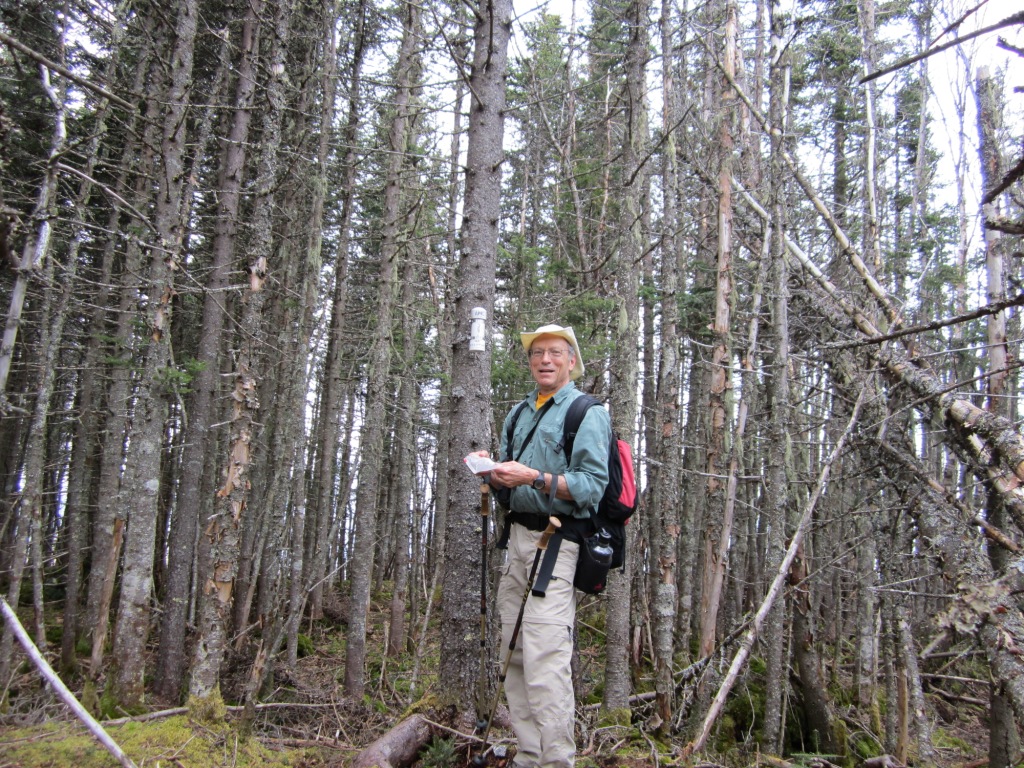 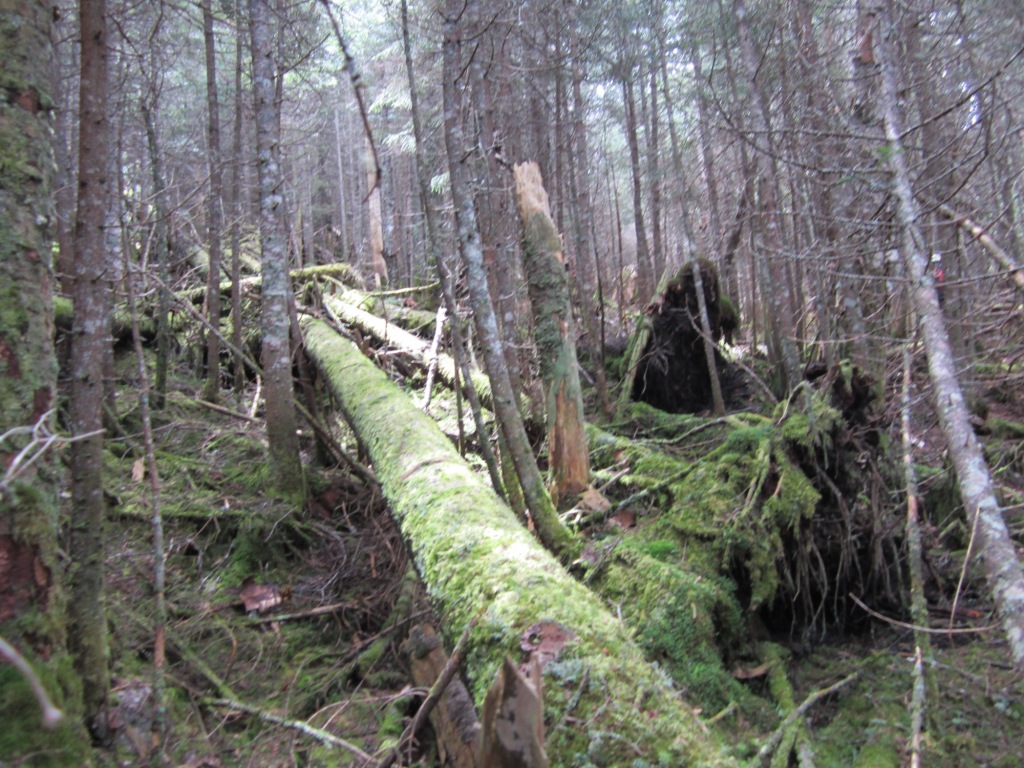 Eventually we got to some kind of flat top with no view at all. Peter guessed at what would be the highest point and we went to it, and there we discovered an AMC canister marking the top (left). Peter has tramped around the White Mountains a lot more than I have and says that he had never seen a canister like that anywhere. We opened it and out came a ziplock bag with a log (started in 2003) and some pencils. Reading the log we saw that the canister gets a couple of visits each year, with the last visit on March 24 of this year. We added our names and wrote some pithy thoughts about moose poop for future generations to ponder. After a lunch stop we headed down, and soon got disoriented - going down is harder than up because you don't have the peak to guide you. Through an opening we saw the town of Jefferson, which meant that we were headed straight north! Wrong - we needed to head west. Peter took out his compass (first use of compass in the whole trip!) and corrected the direction. The going was tougher than on the way up - wetter and more downed trees (right) - but when we got down below 2,700' the spruce gave way and it was easy walking again through the maple-birch forest. As we got close to the road we faced a wall of spruce and turned left to look for an opening, finally found one, and guess what - it was Campground No, 7! We congratulated ourselves on our great orienteering and commented that this would have been mightily boring as a trail hike but it was a lot of fun as a bushwhack!