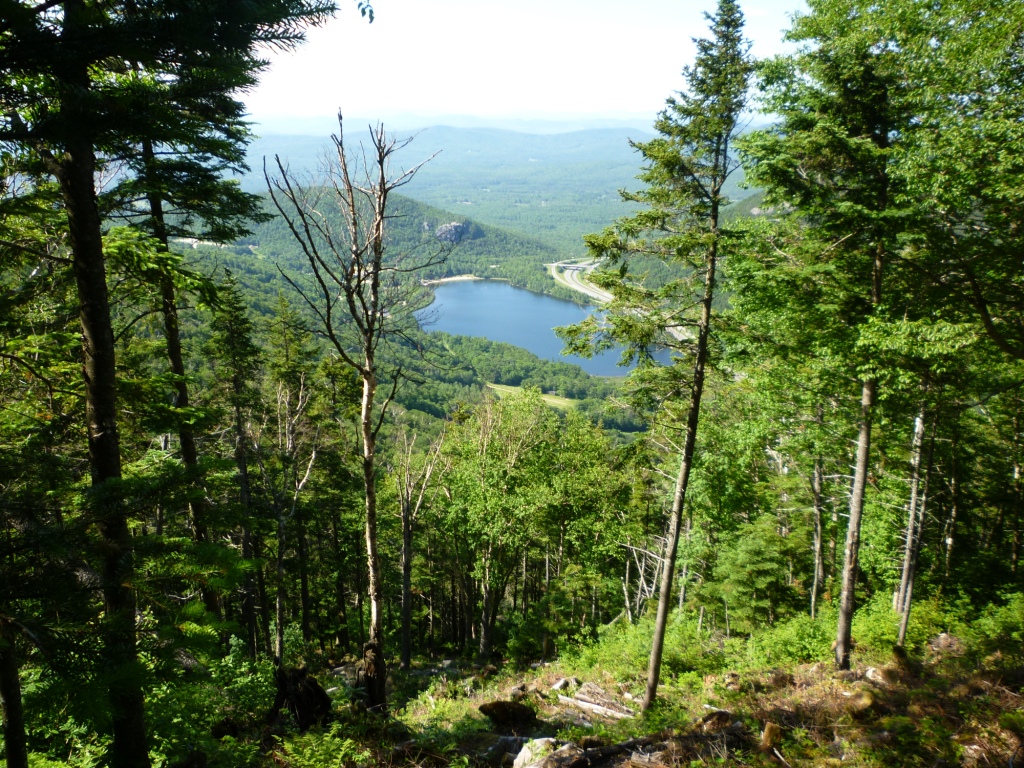 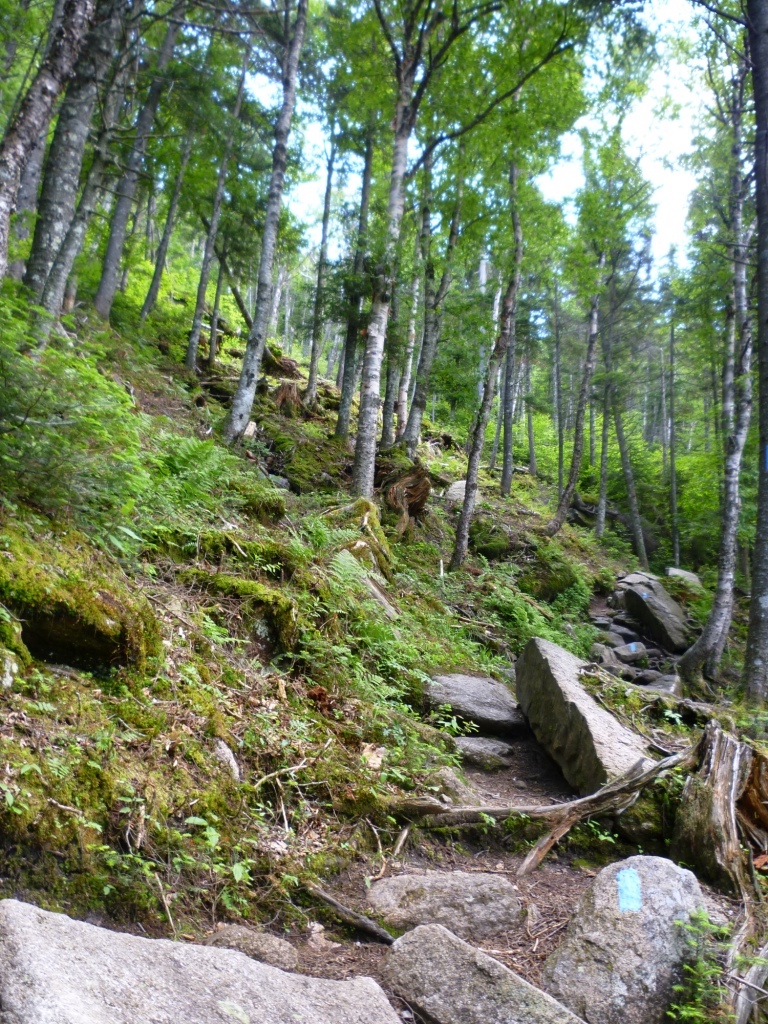 Even though Cannon is in my Bretton Woods backyard I had never done it. It's one of the three New Hampshire 4,000 footers where there's motorized access to the top (in this case a tramway) which deflates the interest. But it was on the list for Alex to complete all the 4,000 footers so off we went. We took the Kinsman Ridge Trail starting from the Tramway parking area. This is the shortest route to the top but relentlessly steep. A good chunk of the climb is through Kinsman Glade of the Cannon ski resort, and that offered nice views down to Echo Lake (left). From my years of snowboarding Cannon when the kids were small I remember Kinsman Glade as a long and wonderful glade (pretty much top to bottom of the mountain) that was never open - I can only remember once that it was. In Bretton Woods we have short steep pitches in our glades but never sustained like Kinsman Glade! (right). Hiking up Kinsman Glade involved a lot of steep ledge and boulder hopping, more fun than difficult. 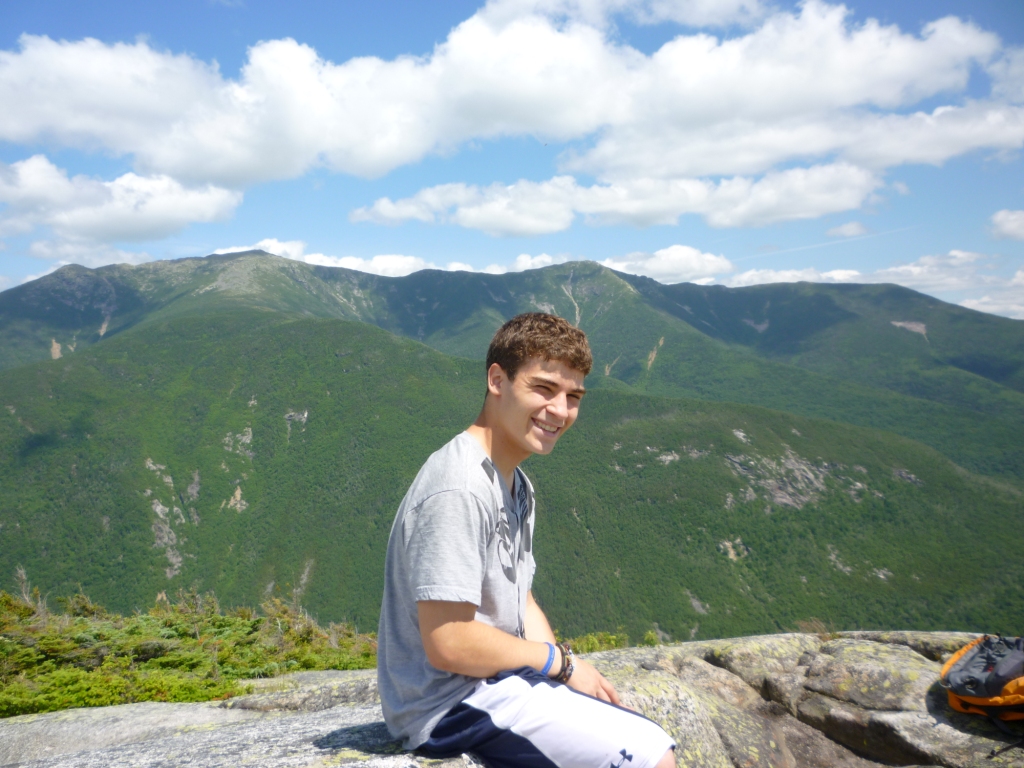 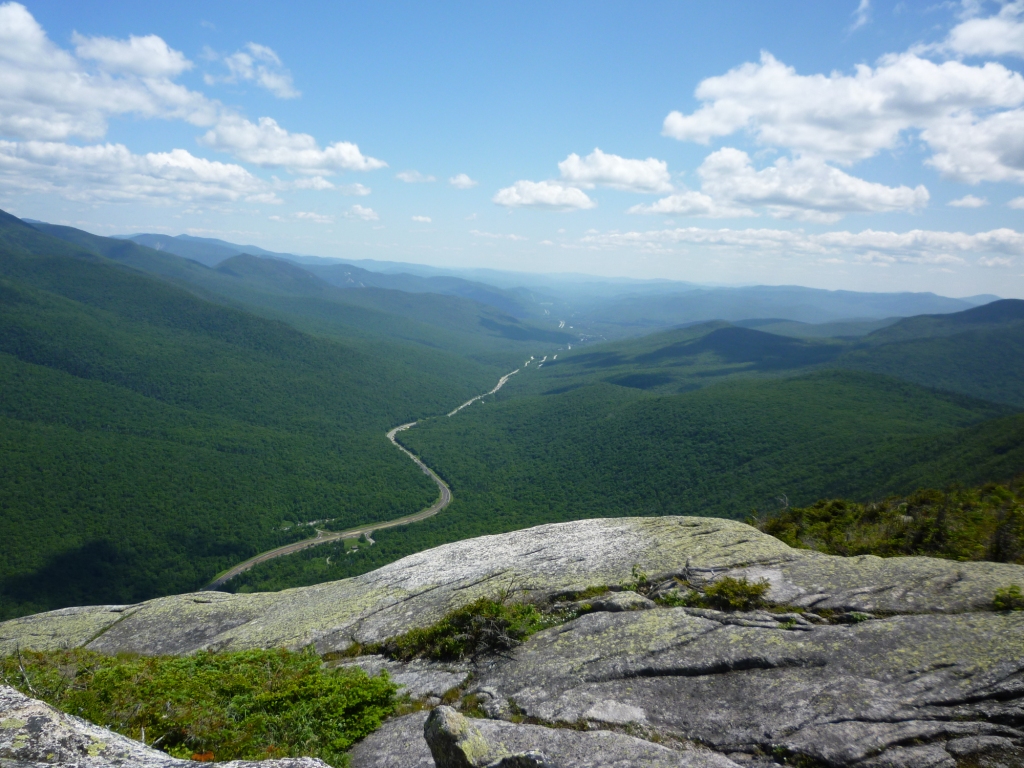 At about 3,700' we broke into the open and a side trail took us to the Cannon cliffs. The trail is unmarked so you have to watch for it. The Cliffs provide absolutely spectacular views of the Franconia Ridge across the Pemigewasset Valley (left) and of Highway 93 snaking down the Valley looking south (right). 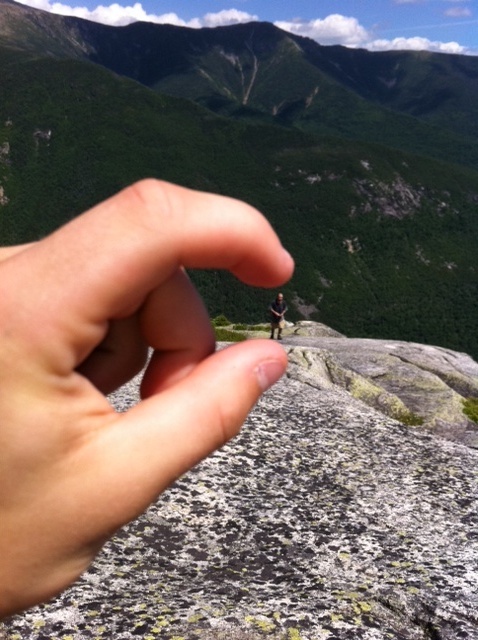 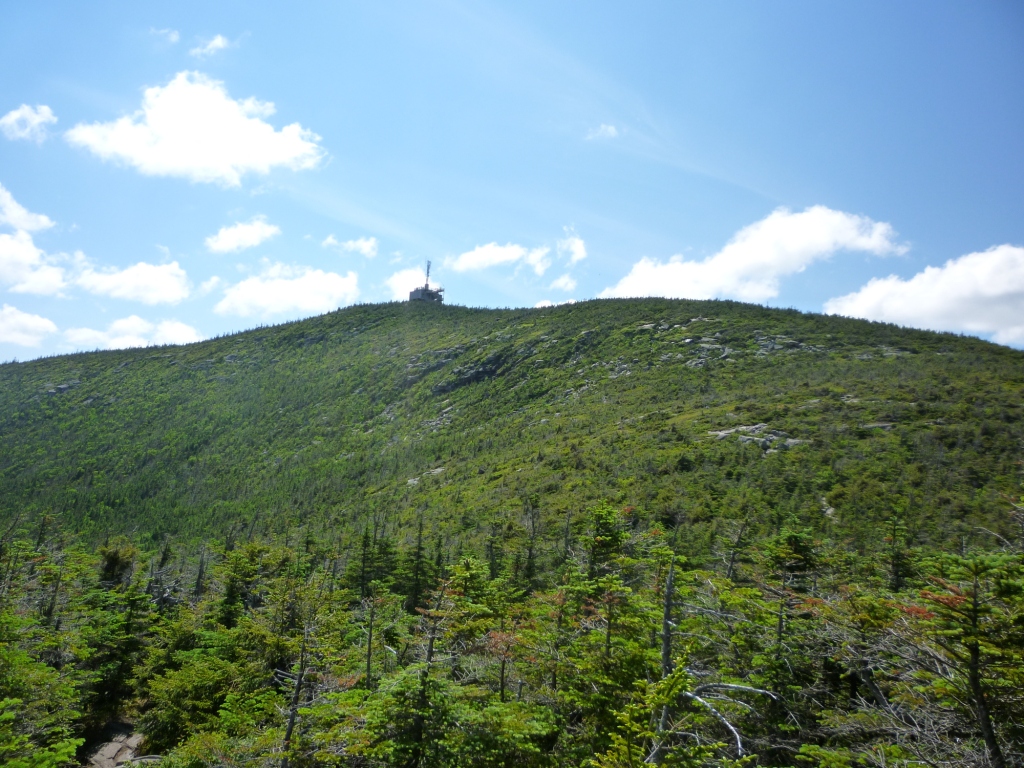 We hung out on the cliff for a while. Being in such grandeur made me feel small (left). We could see the Cannon summit with its observation tower (right) but were in no particular hurry to get there and join the crowds discharged by the tramway. 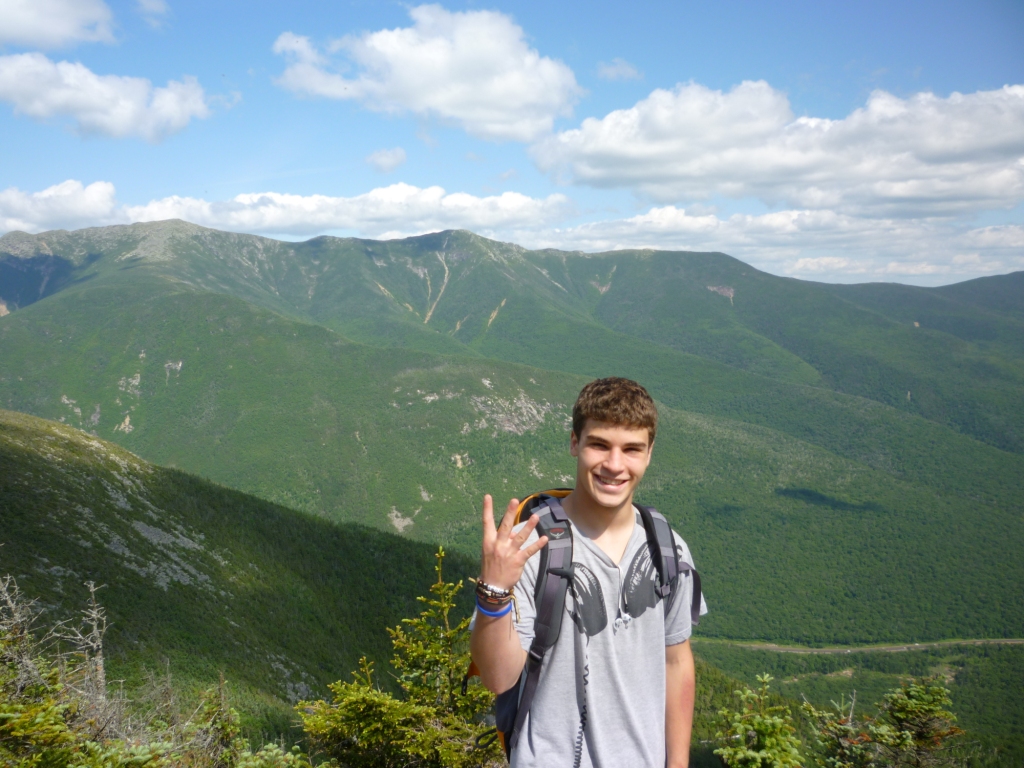 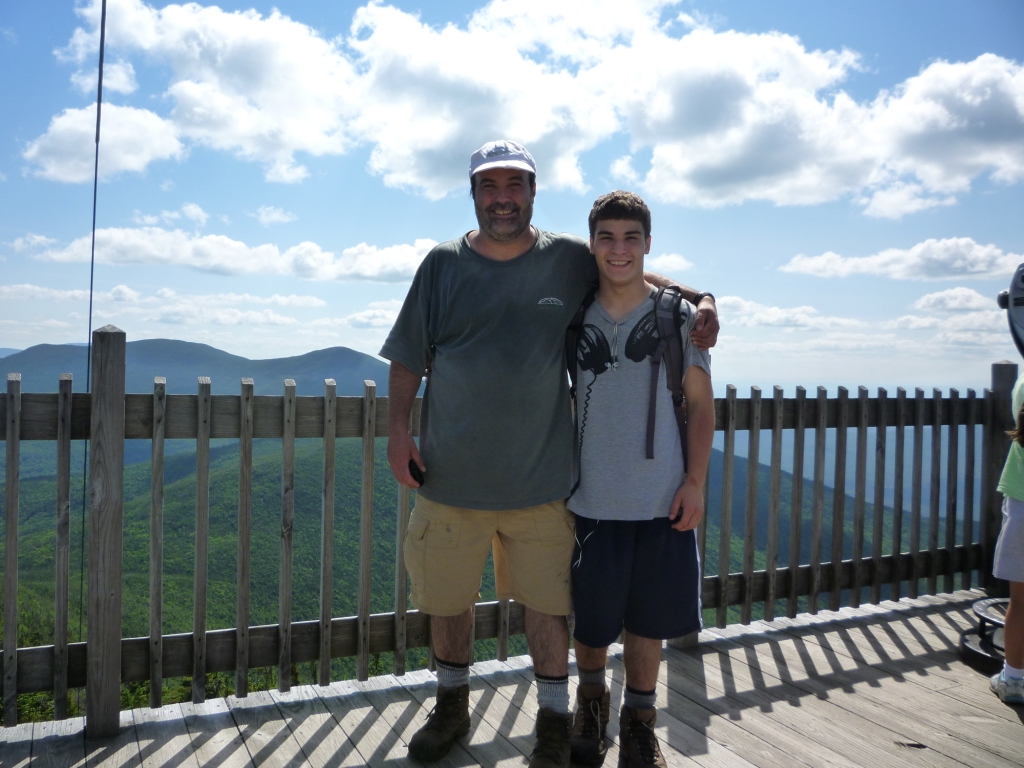 On we went though to the top of Cannon, through a lot of open terrain and nice ridge walking - ledgy and with the scent of pine. At 4,000' we joined the gravel boulevard from the tram to the summit tower, with a crowd very different from the usual hiking crowd. We climbed the tower where there is a fantastic view. Alex had nailed his 44th 4,000 footer - only four to go! (left). He makes his father proud (right, looking south with Kinsmans in background). A few people who had gone up the tramway asked us about going down, and we discouraged them by telling them it's really steep - it would be miserable in sneakers. Anyway, that was it and we came down the way we came. A short hike but well worthwhile.