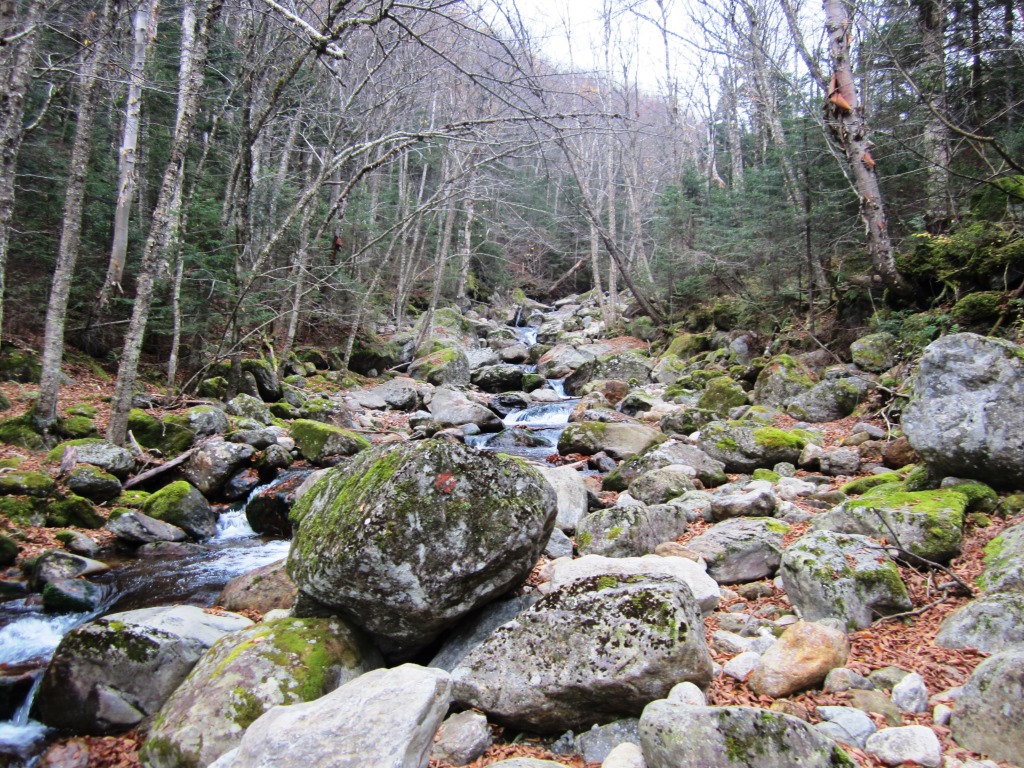 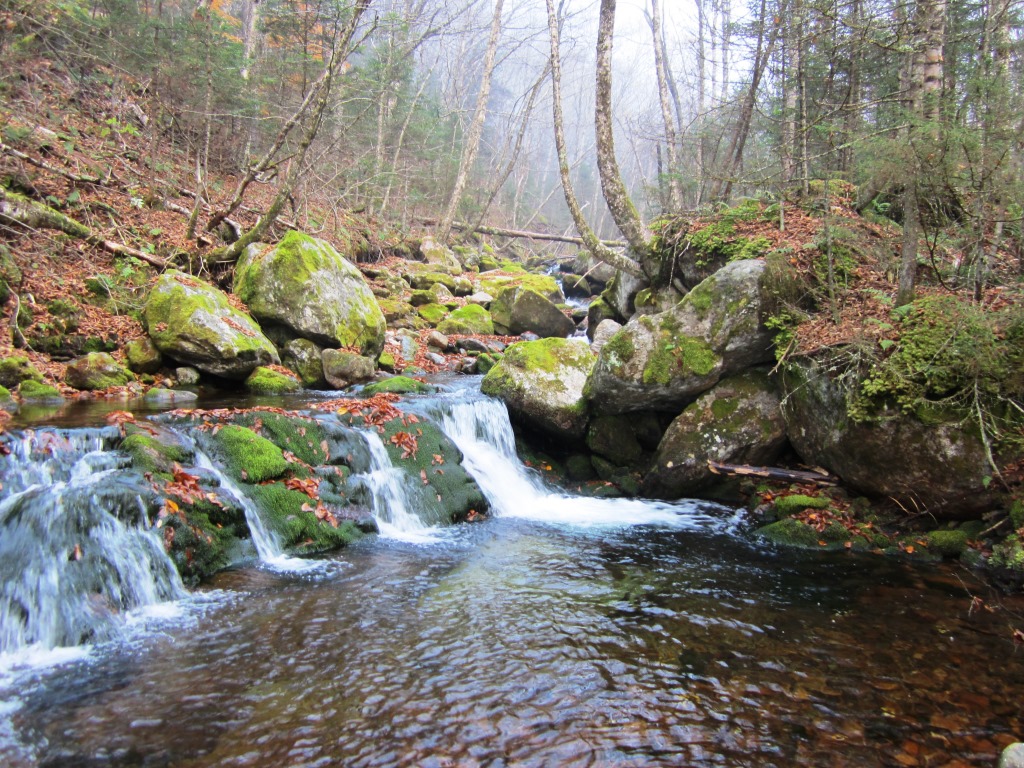 Castle Ravine is a little-visited glacial cirque between Jefferson and Adams. It was a first for Peter Wyatt and me. Peter's wife Nancy dropped us at the Castle Trail trailhead (1,500'). We went up Castle Trail and from there to Castle Ravine Trail, crossing the Israel River a number of times. Water was low but the crossings still required some deliberation. At moderate/high water I'm sure that you must get your feet wet. As we got into Castle Ravine the valley walls narrowed and the fog gave an enchanted allure to the forest and the river (left and right). 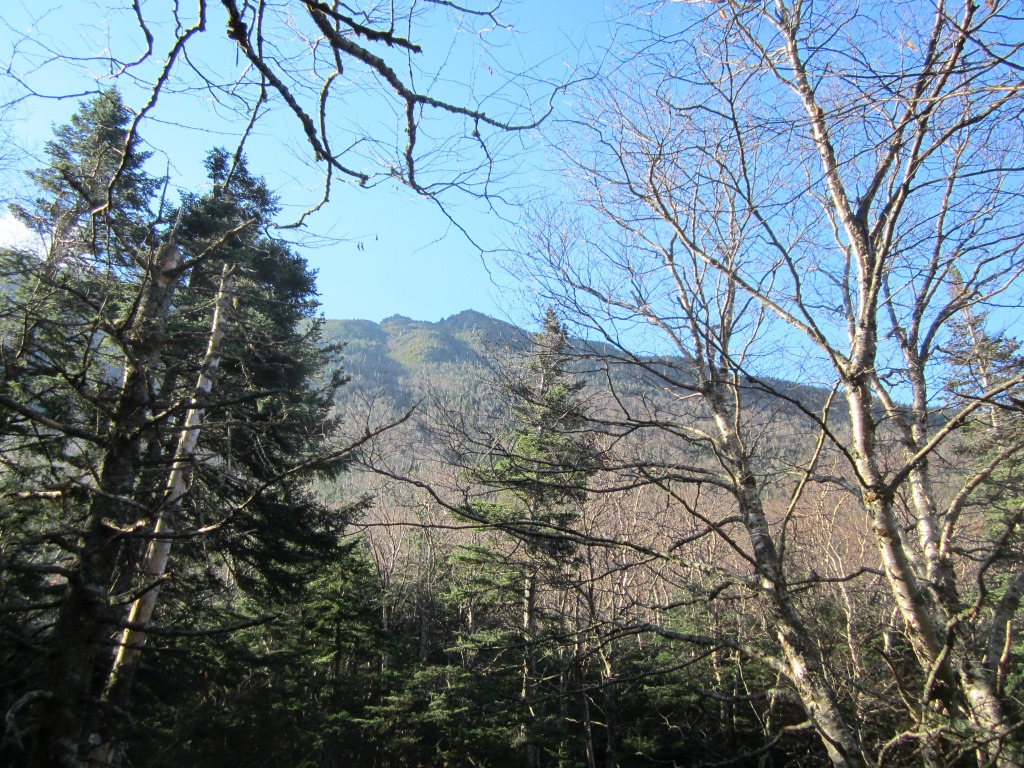 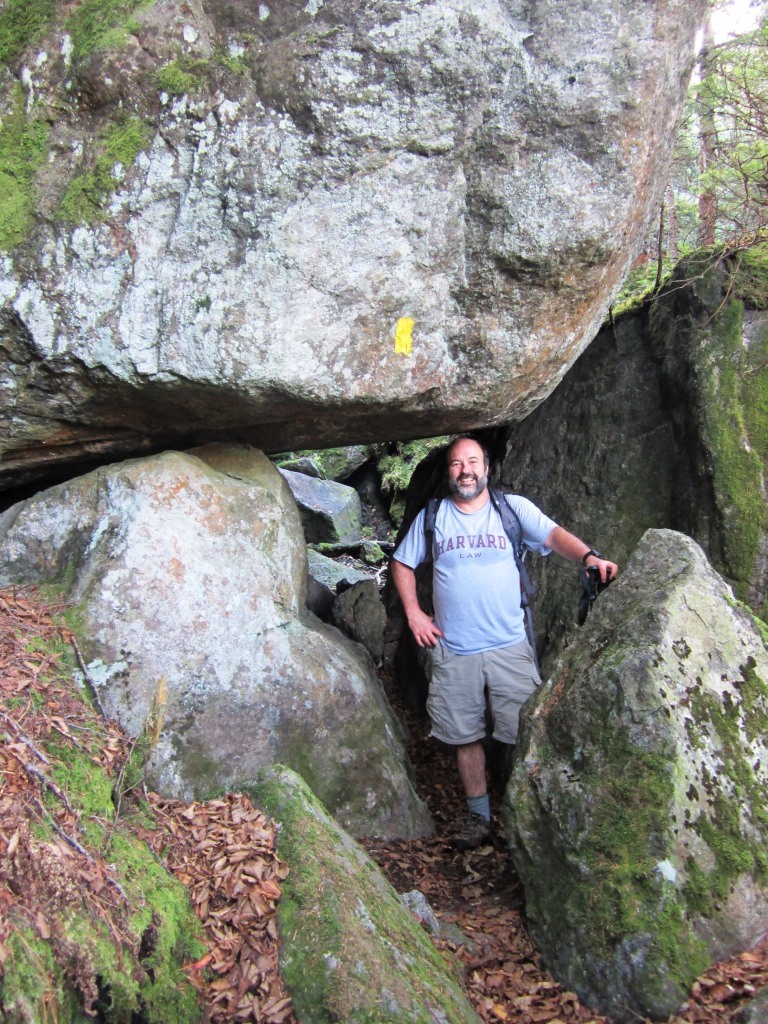 Looking up above the fog gave way to blue skies and we had our first view of the Castles overhead (left). The trail became rougher as the grade steepened. We passed through Roof Rock, a named landmark (right). 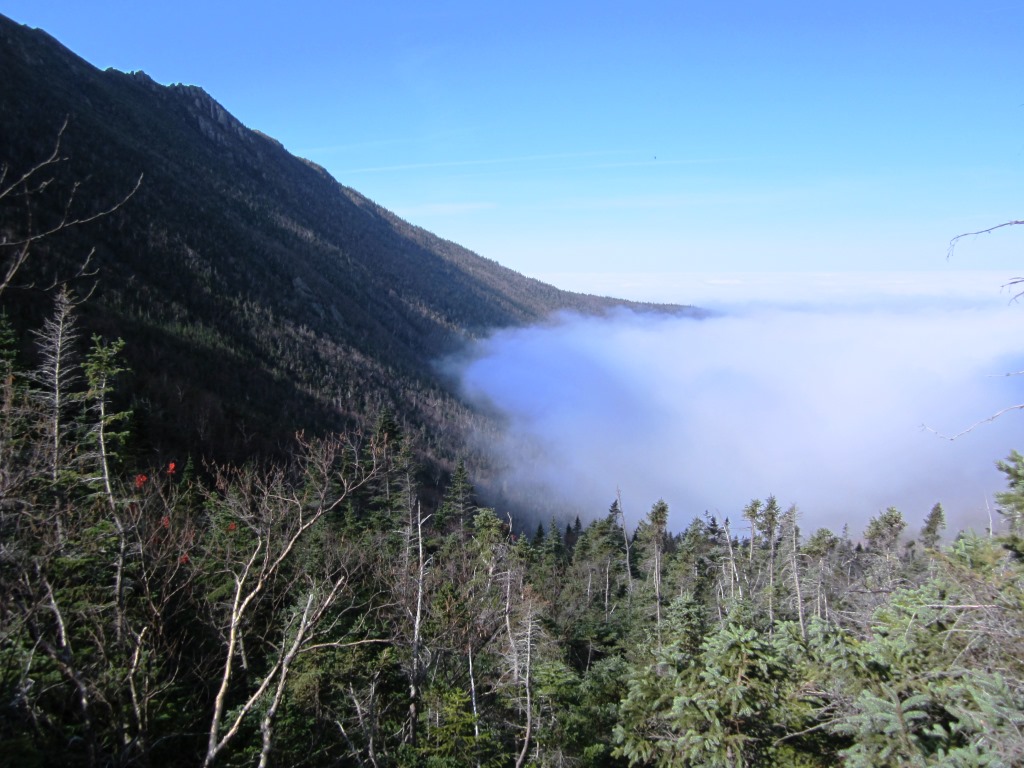 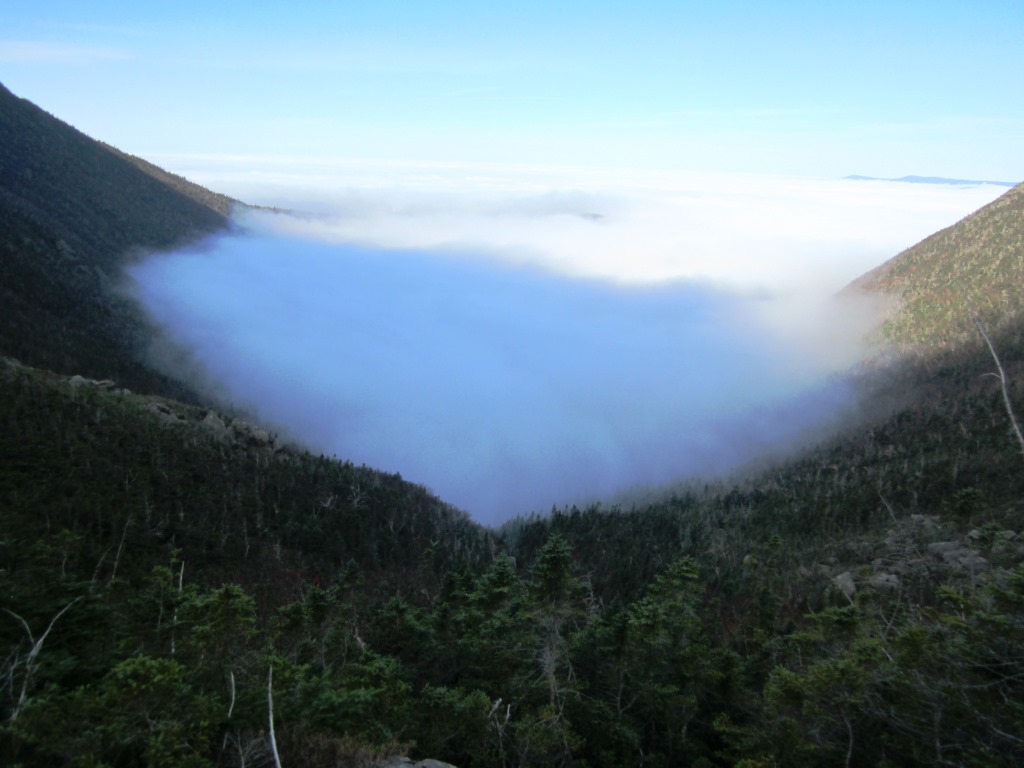 As we began to climb the headwall of the ravine we got out of the fog and watched it fill the valley below us (left and right). The trail became very rough and steep, eventually turning into a continuous hands-and-feet scramble. 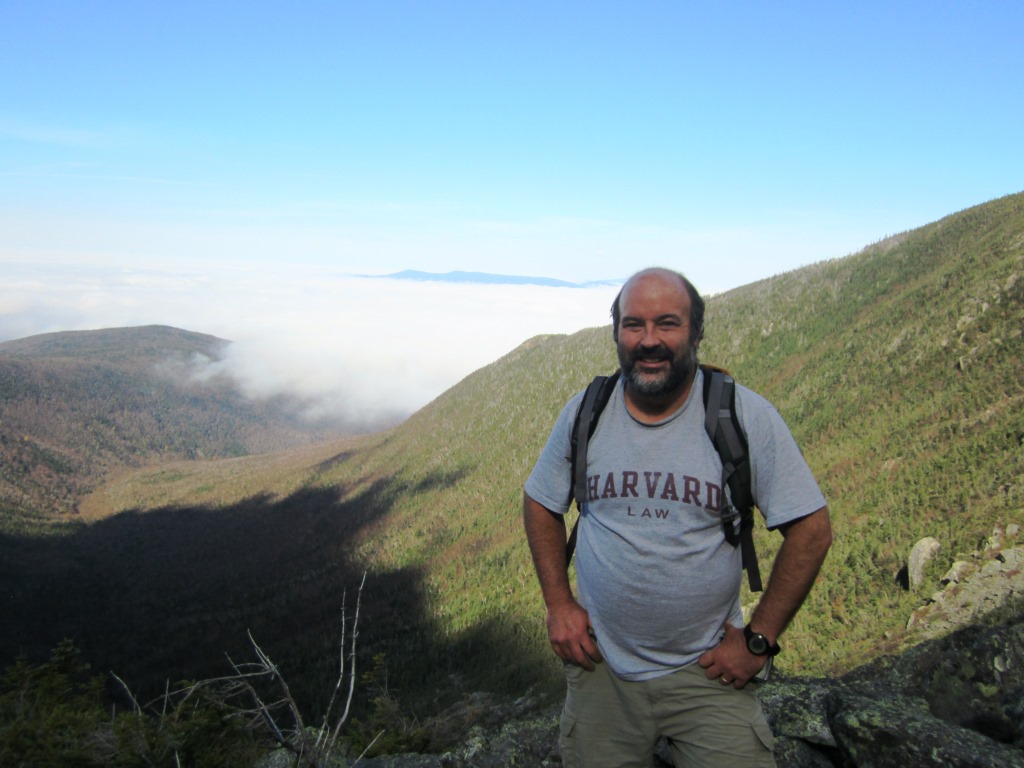 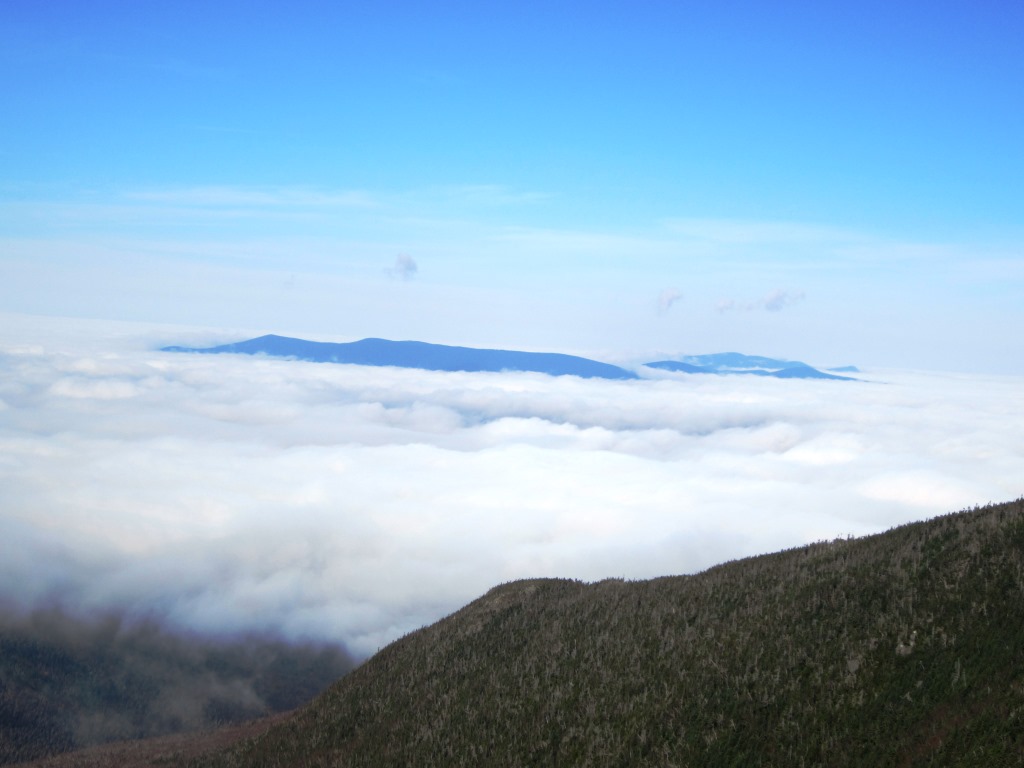 The peaks of the Pliny Range rose to the north above the fog (left and right). 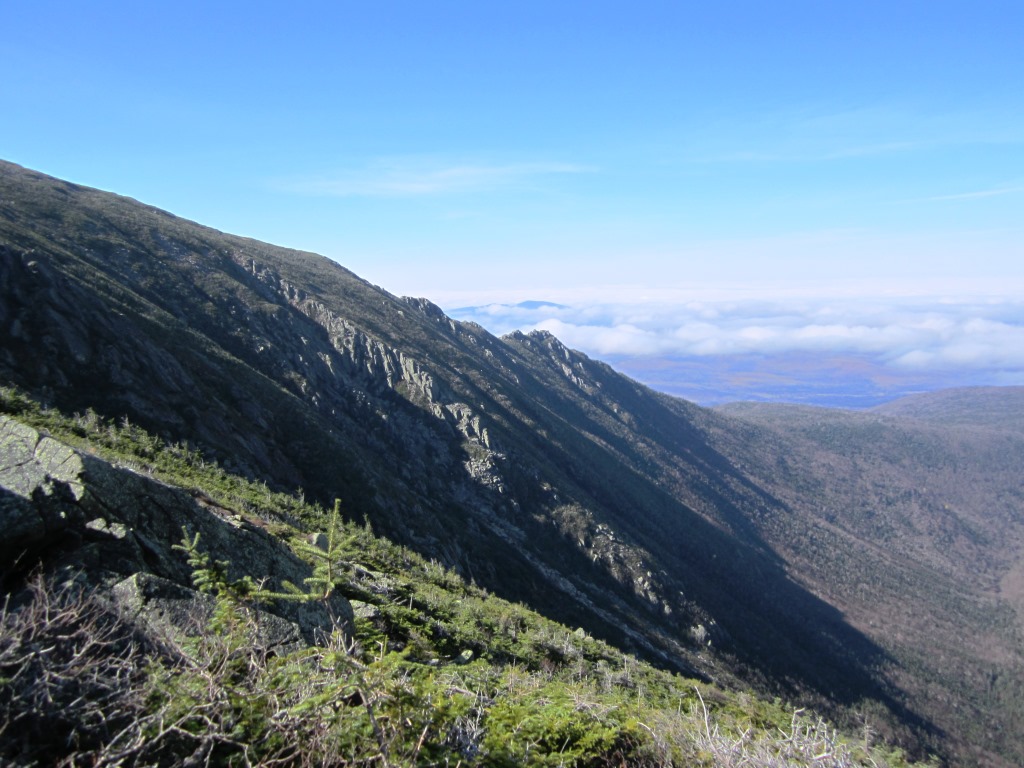 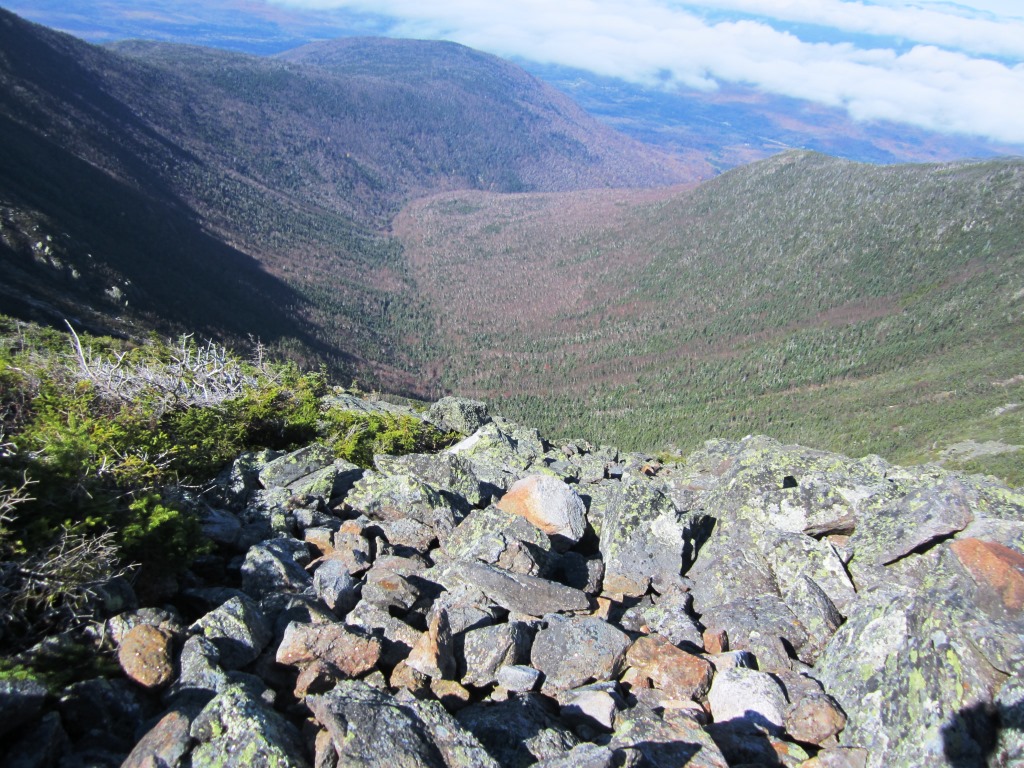 As we got toward the top of the headwall the Sun rose high enough to shine directly on the Castles, providing spectacular contrast (left). Fog lifted from the valley below (right). 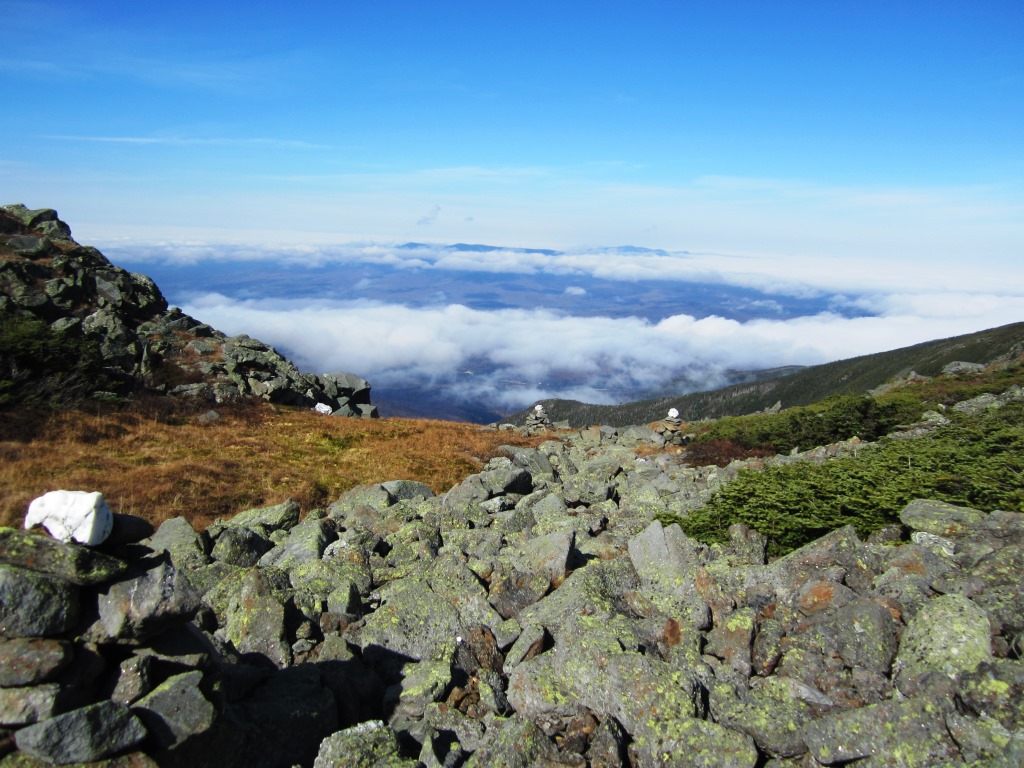 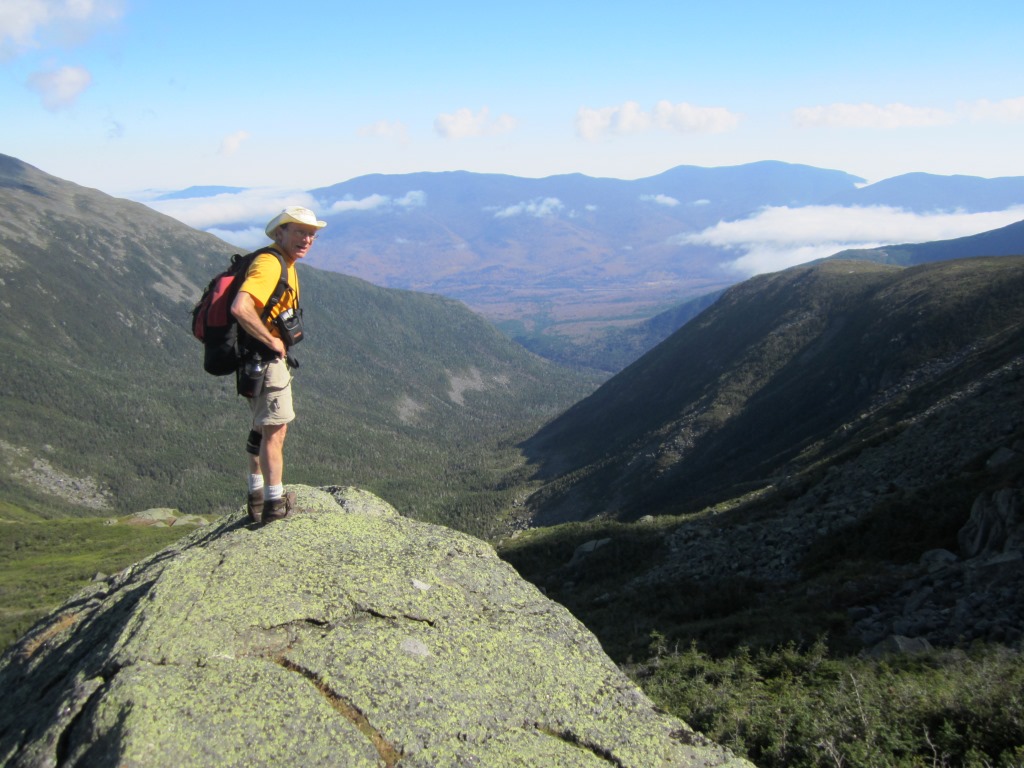 At 4,900' we passed the lip of the headwall and in an interesting section of the trail where the cairns are topped by quartz rocks (left). The North Country and Pliny Range stand in the middle of broken clouds. We got to Edmands Col and from there took the Jefferson Loop to the top of Jefferson. We briefly had spectacular views toward the east, looking down Jefferson Ravine and to the Wildcats and the Carter Range (right). 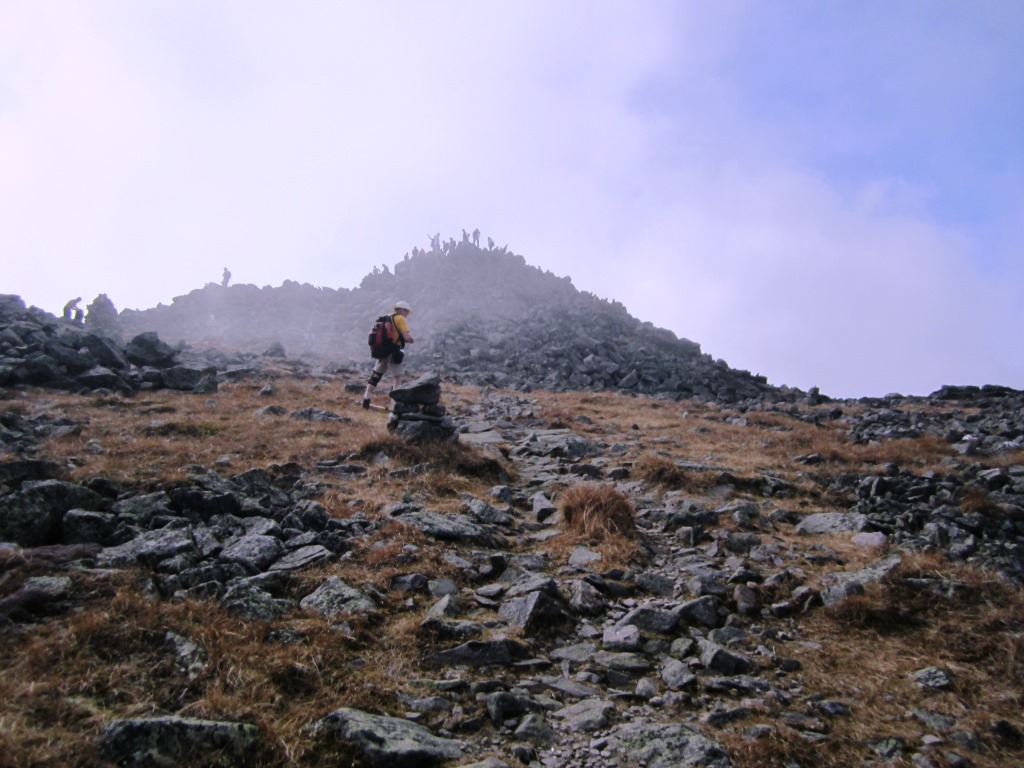 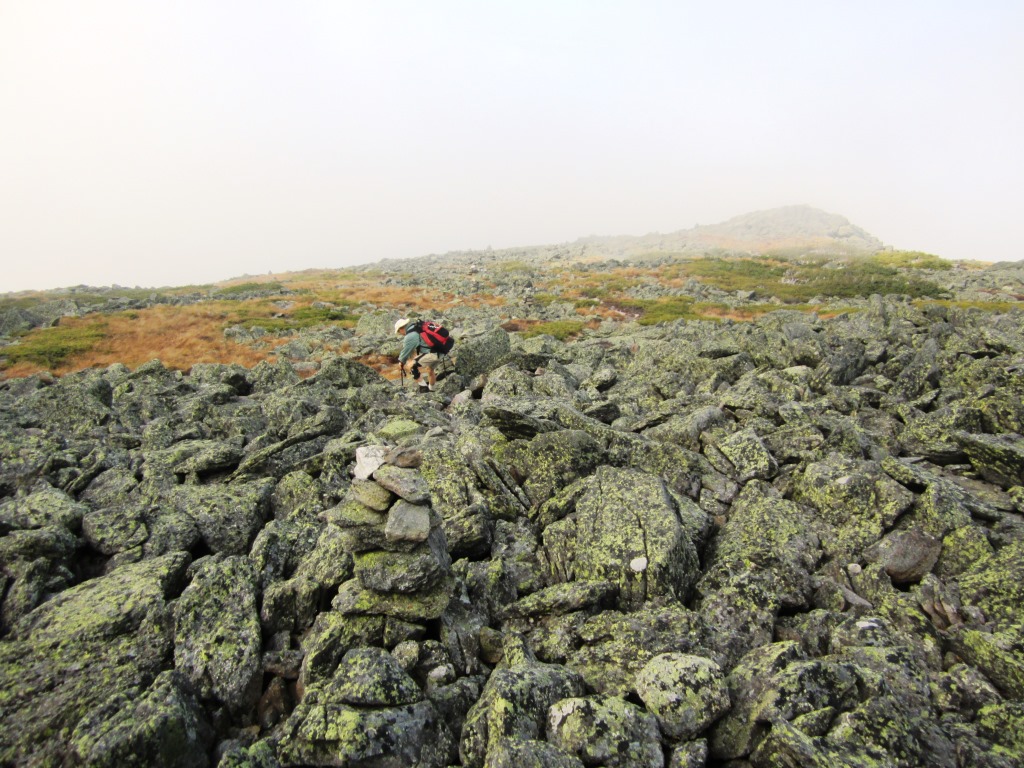 So far we had seen only a few people, but now things were fairly crowded in this very popular area of the Presidentials. Crowds were to be expected on this sunny windless long weekend (Columbus Day in the US, Thanksgiving in Quebec). As we approached the top of Jefferson we saw fog cloak the summit and a big crowd giving the peak a serrated look (left). We didn't need to go the top of Jefferson, having done it many times, and instead started going down the Castle Trail for a lunch stop (right). 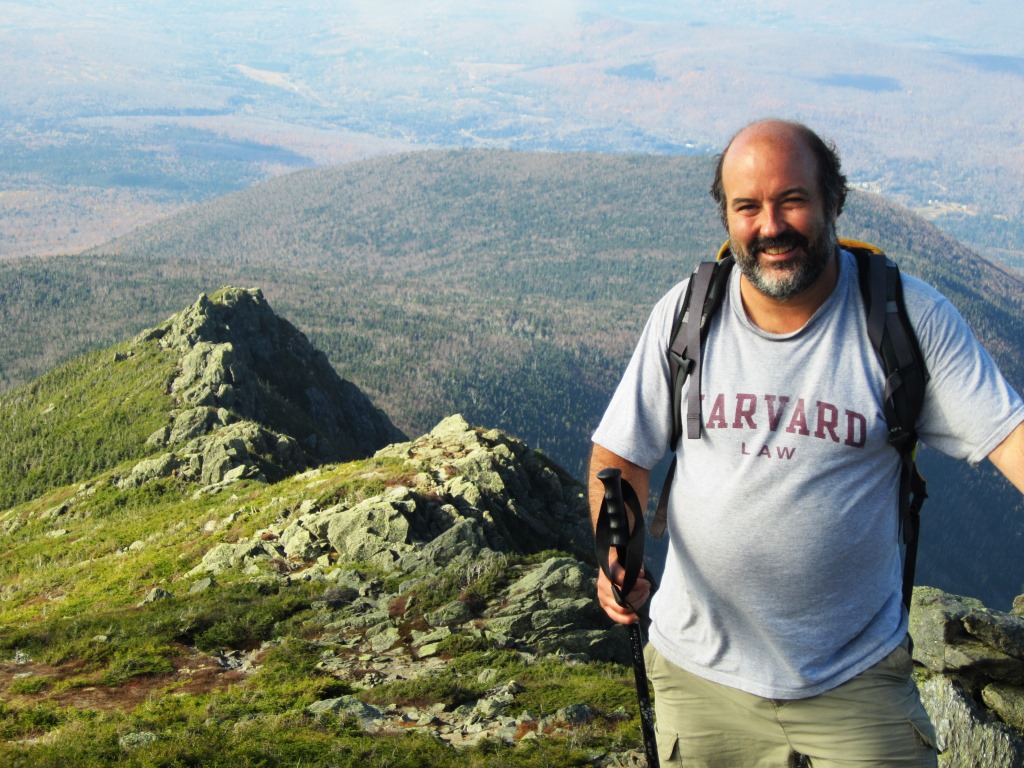 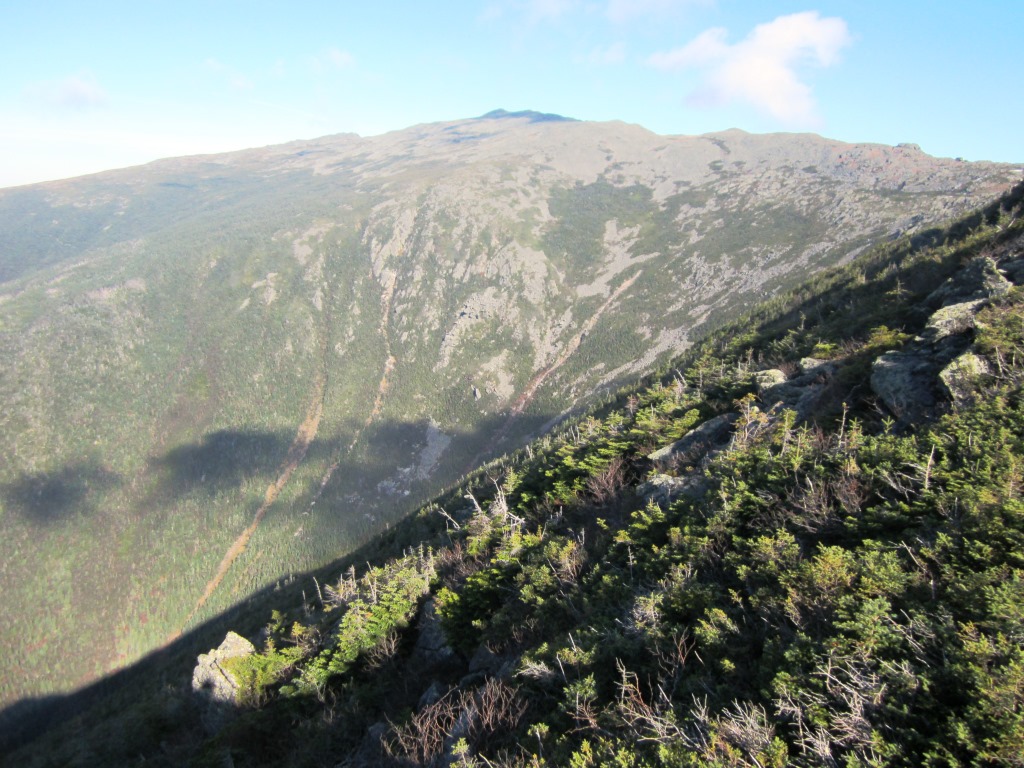 The Castle Trail follows the sharp ridge known as the Castles and is very rough - pretty much rock-hopping the whole way. When you can take a break from watching your feet the trail offers great views looking down to the Castles (left) and towards Castle Ravine where you can see the marks of many avalanches (right). 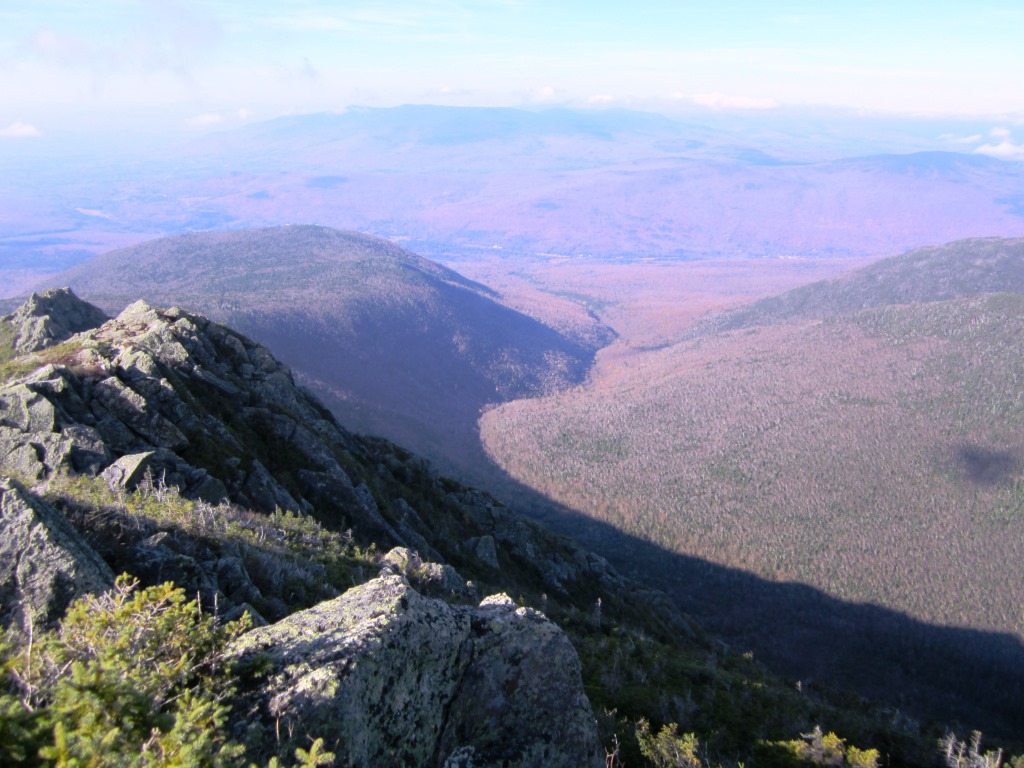 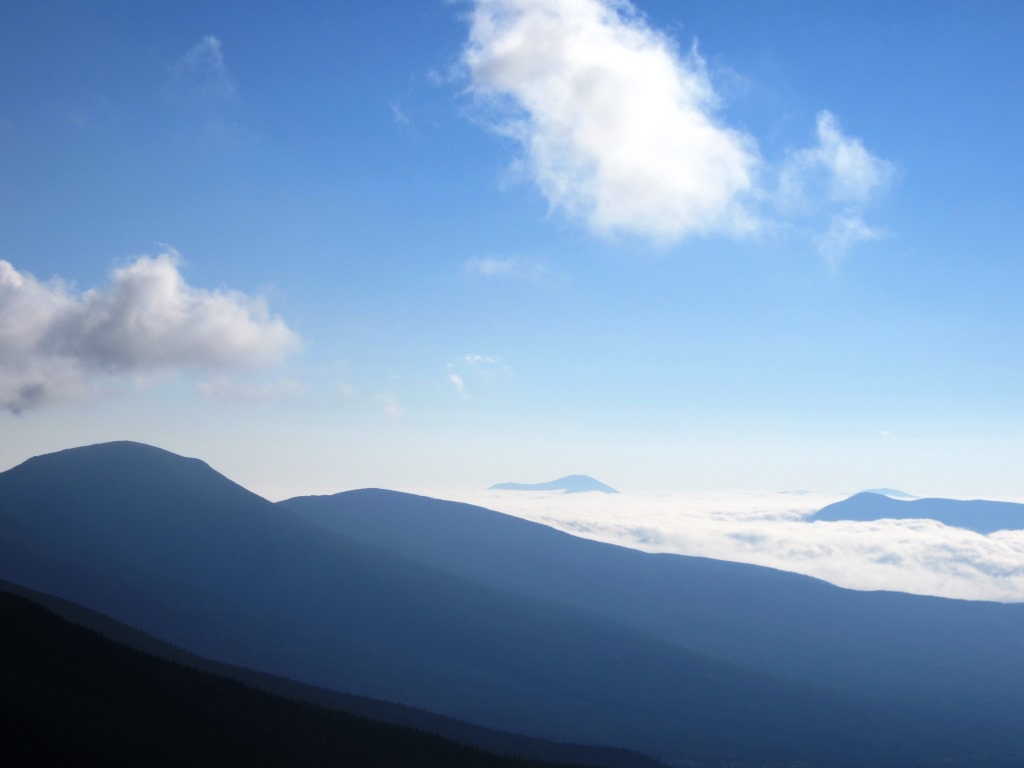 Before dropping down into the woods I took a couple of aesthetic pictures, of the winding valley to Castle Ravine with interesting shadows (left) and off to the southern Presidentials with the Willey Range to the right and Carrigain in the distance (right). 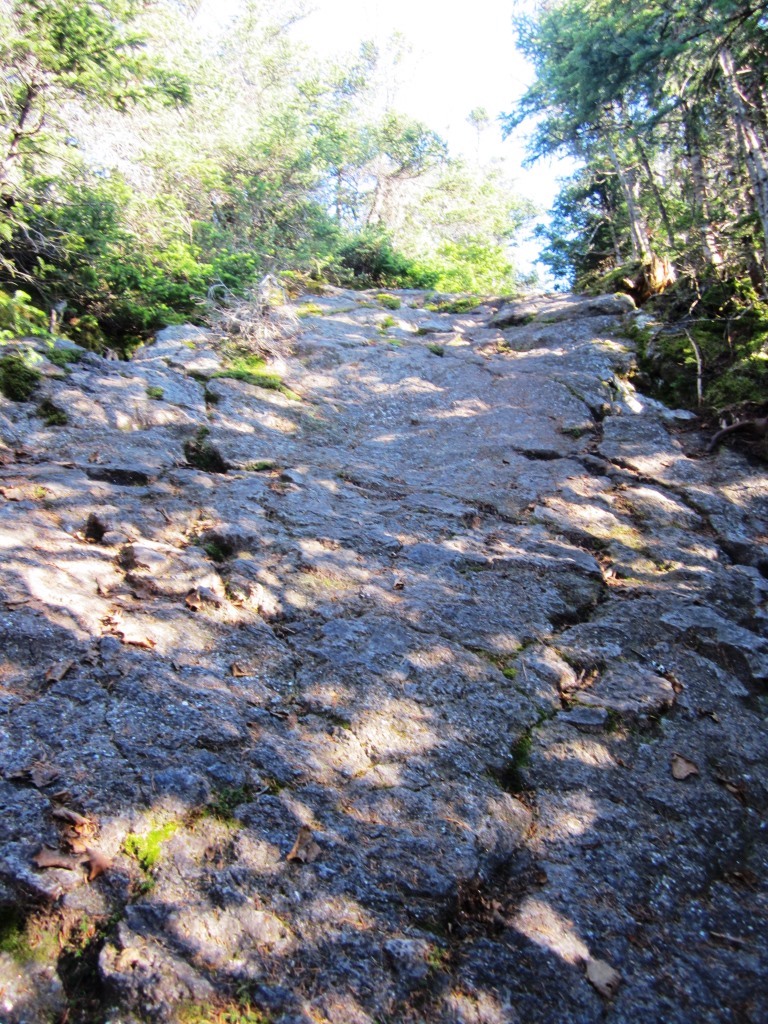 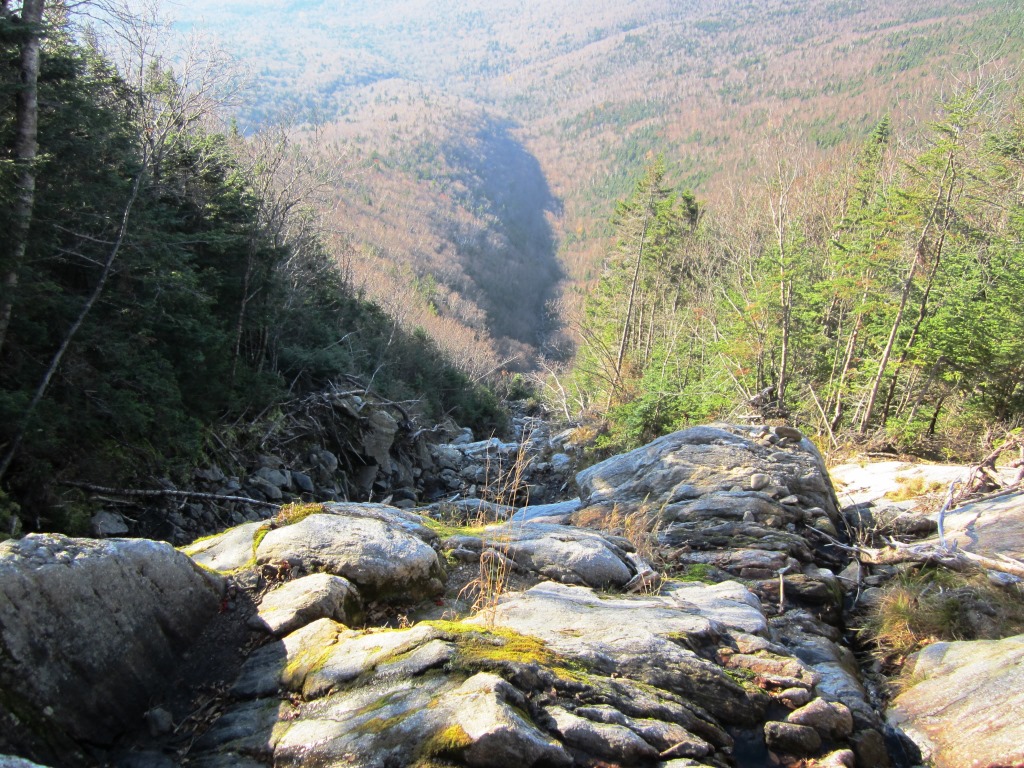 Once into the woods the Castle Trail became worse, with very steep sections and a lot of hands-and-feet. Some steep slides (left) had to be carefully negotiated. We got to the Link and took it towards Caps Ridge Trail. This section of the Link is famous for being an awful 1.6 miles, and indeed it was a jumble of rocks and roots. There were a few pretty spots such as this chute (right) and a stream (below left). 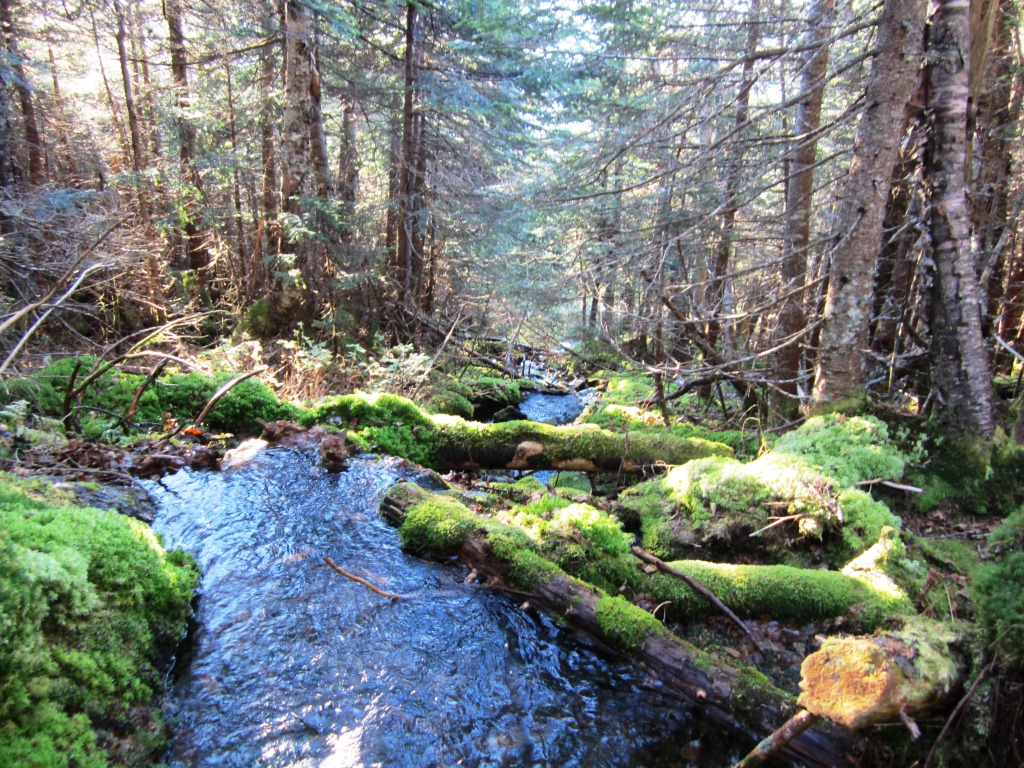 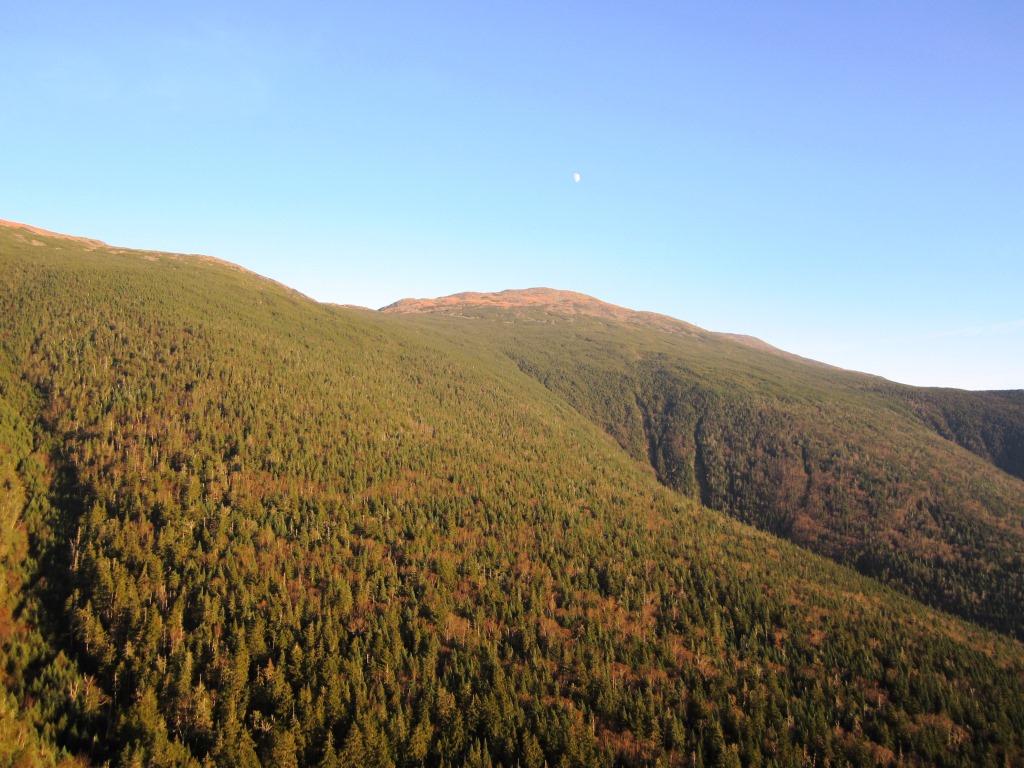 Eventually we got to the Caps Ridge Trail, just above the kettlehole rock where the evening light gave a glorious view toward Washington (right). Peter got a signal on his cellphone and called Nancy who drove up to pick us up at Jefferson Notch. Going down Caps Ridge to Jefferson Notch was just a breeze for us after this day of continuous rough trails - we were at the parking lot in just 20 minutes.