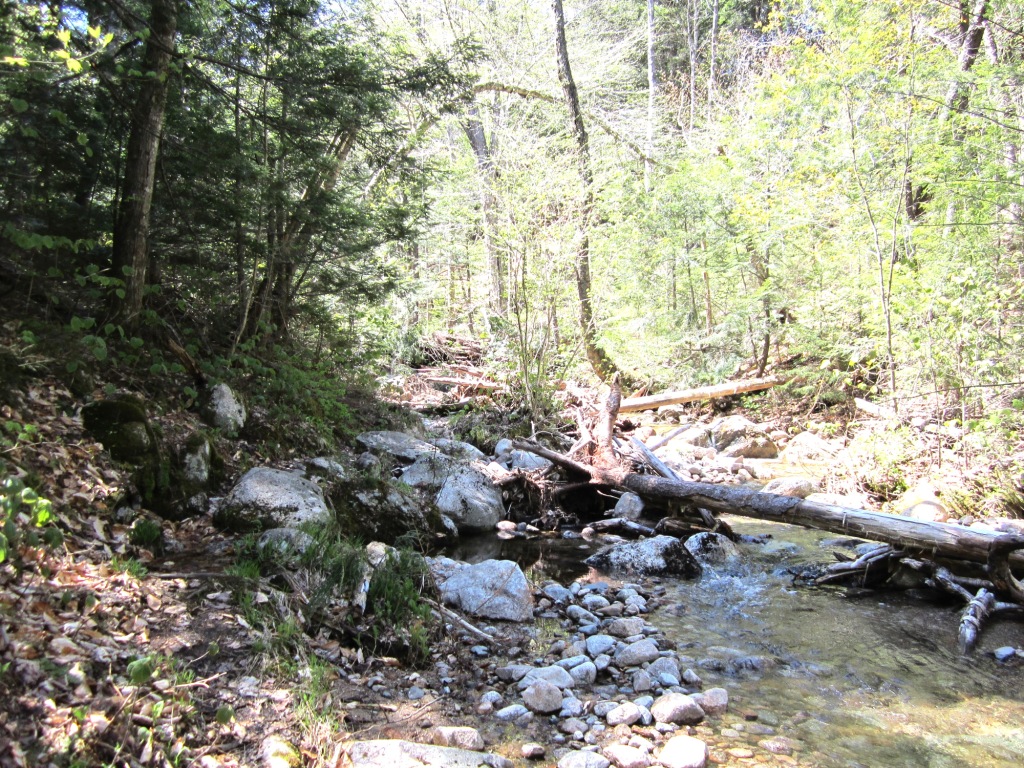 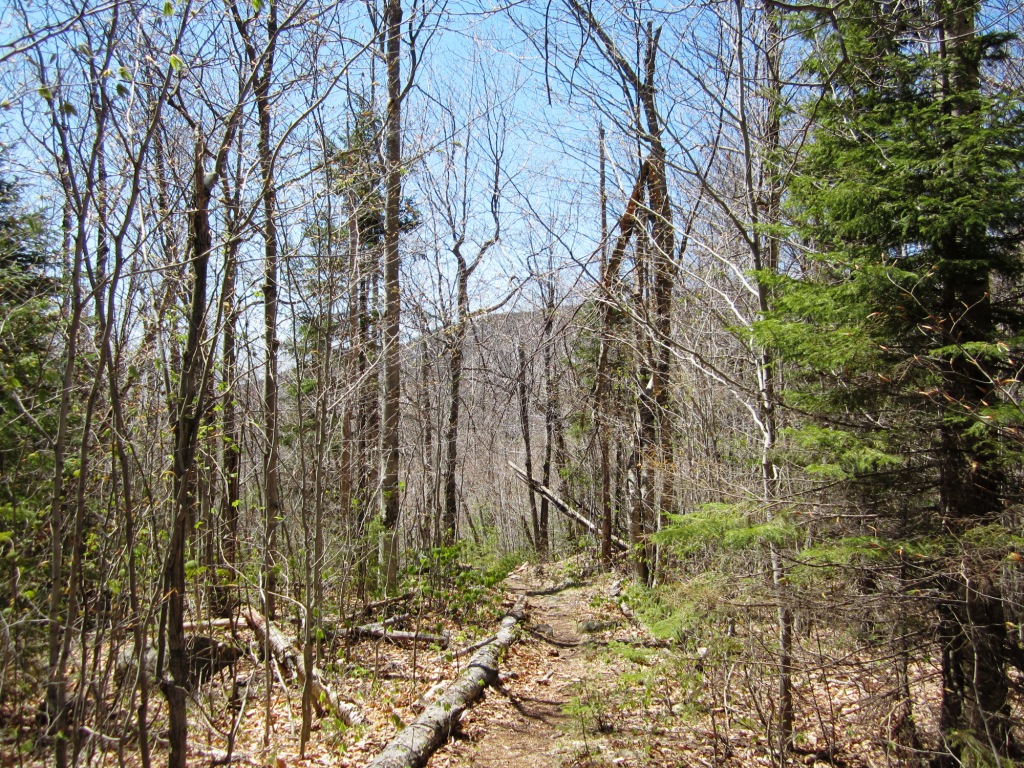 Mt. Chocorua is a very popular mountain in the southeast corner of the Whites because of its ledgy top with 360o views, low elevation (3,475'), and easy access from the metropolis to the south. I had last climbed it more than 20 years ago with Janice, before the kids. Fear of crowds had kept me away since, but Roger Gagne suggested that we take advantage of the loneliness of May and make a long loop by some little-used trails. We started from the Kacamangus Highway (1,260') and took the Bolles Trail south to a height of land (2,200') that is a pass between Chocorua to the east and Mt.Paugus to the west. The trail followed a brook most of the way and was totally washed out in many places (left), certainly because of flooding from Hurricane Irene last August. At the height-of-land (right), we had views through the trees of Chocorua to our left and Paugus to our right. The growing season had not started yet at that altitude and the maple-birch forest was bare. 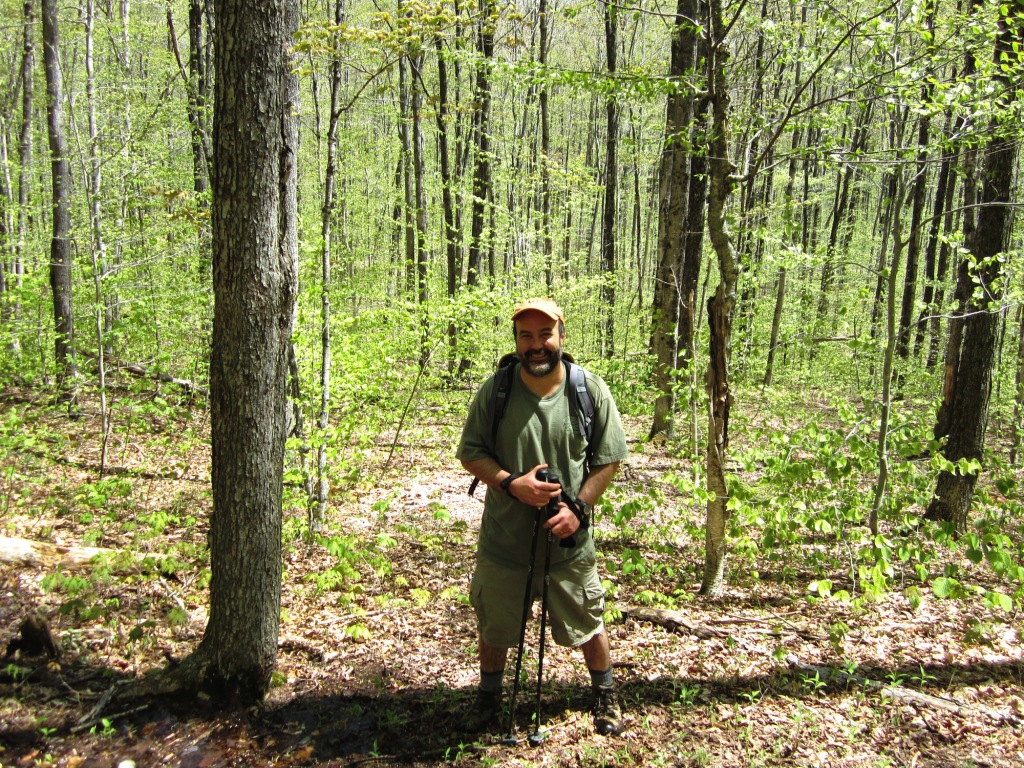 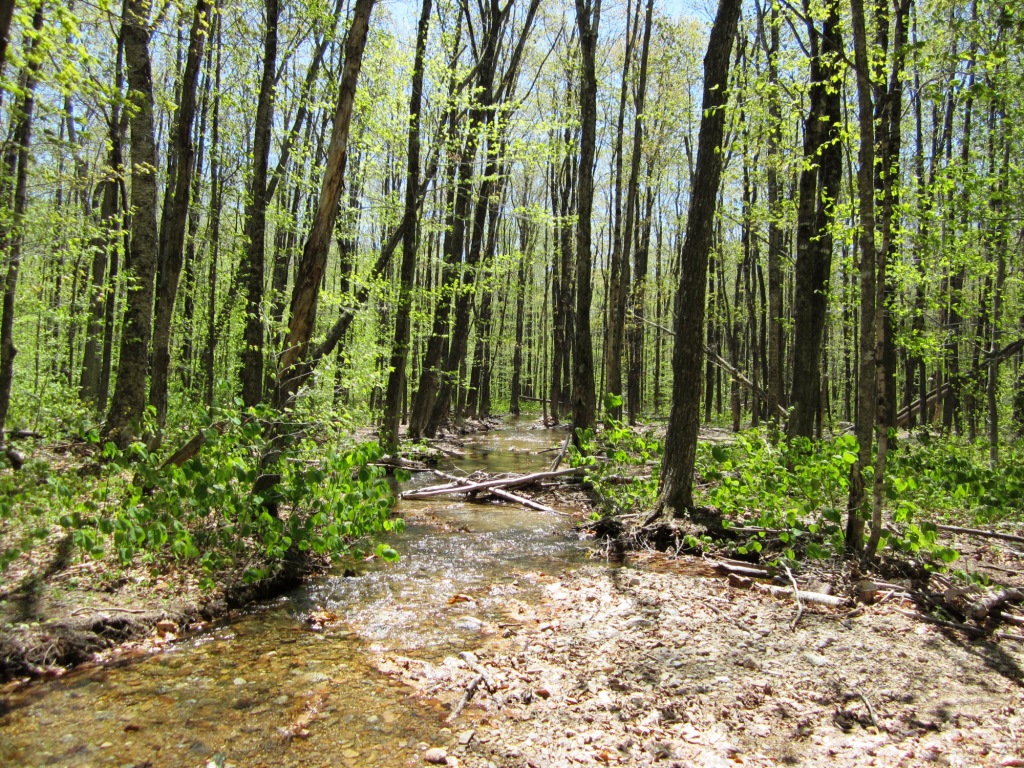 From the height-of-land we continued south to the junction with the Bee Line Trail, dropping in elevation back down to 1,300'. As we dropped we returned to the growing season with an open lime-green forest that was just gorgeous (left). The trail was much better defined than on the north side but still showed devastation from hurricane Irene. There were many spots where a stream had taken over the trail (right). As we reached the intersection with the Bee Line Trail, we reflected on the fact that we had returned to the original altitude of our trailhead, and we still had Chocorua to climb. 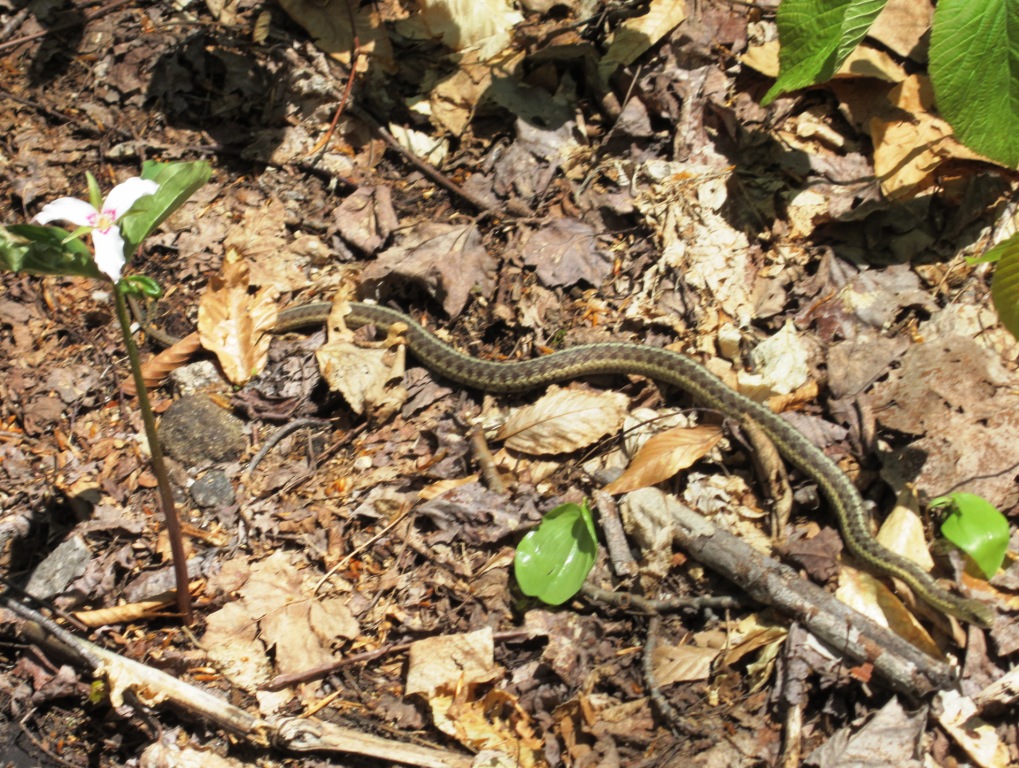 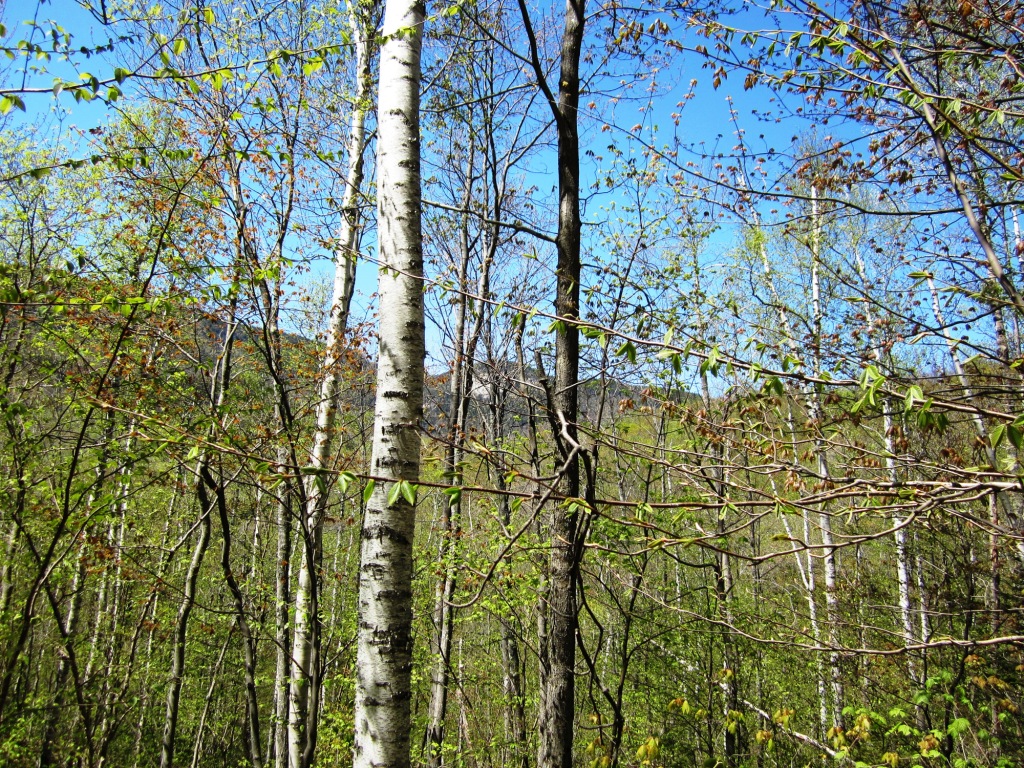 The Bee Line trail started on a very moderate grade. The trilliums were in bloom and I had the chance to photograph one with a big snake next to it (left). The open maple-birch forest was a pleasure to walk through, and we could see Mt. Chocorua poking out through the trees (right). We met a crew from the Chocorua Mountain Club (CMC) maintaining the trail. When they heard that I was in charge of the famously well-maintained Mt. Clay Loop they tried to put me to work but that didn't take, I was off-duty. They had a heavy paraphernalia of rakes, lopers, shovels, chainsaw. I'm glad the Mt. Clay Loop is above treeline. 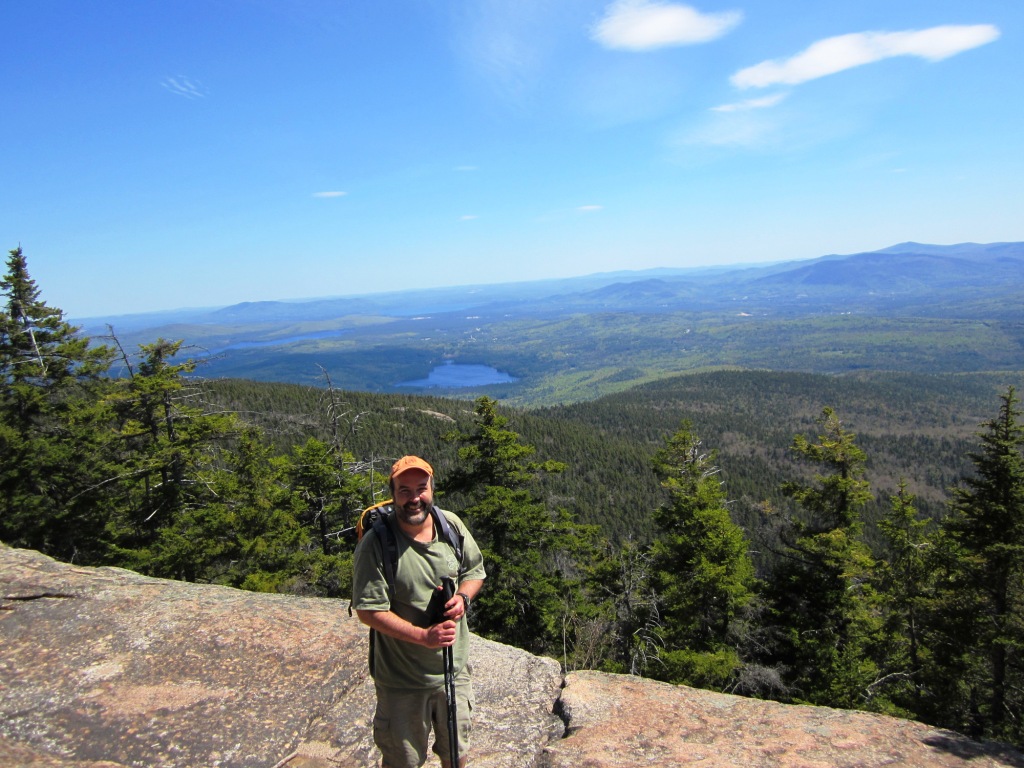 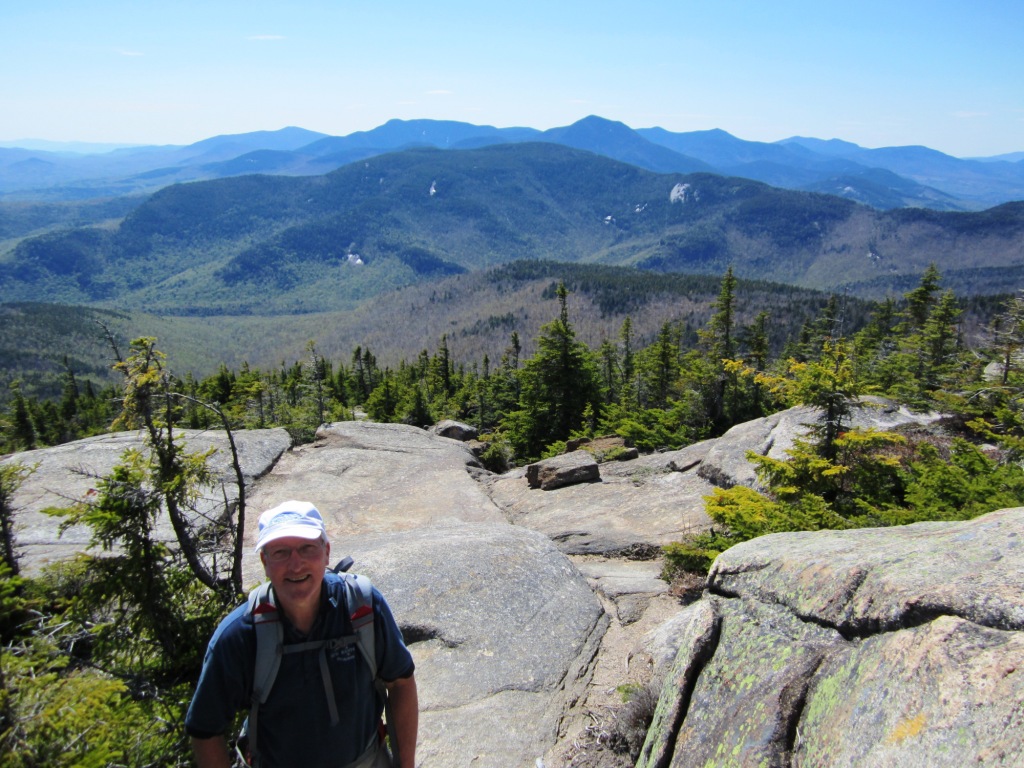 Finally as we got close to Chocorua the trail became much steeper. We reached the Brook Trail, which was little more than a succession of steep ledges. It wasn't well marked and at some point we lost it and continued scrambling from ledge to ledge with hands and feet. I didn't mind this at all because bushwhacking is now in my blood and anyway we had Chocorua in sight. There was no snow left anywhere. Eventually we saw the faint yellow blazes of some trail again, and at that point (about 3,200') fantastic views began from the open ledges. At left is the view south with Lake Winnepesaukee in the distance, and at right is the view west towards Passaconnaway and Whiteface. I had done a great hike over Passaconnaway and Whiteface the previous summer as part of Alex's quest of completing the 4,000 footers of New Hampshire. 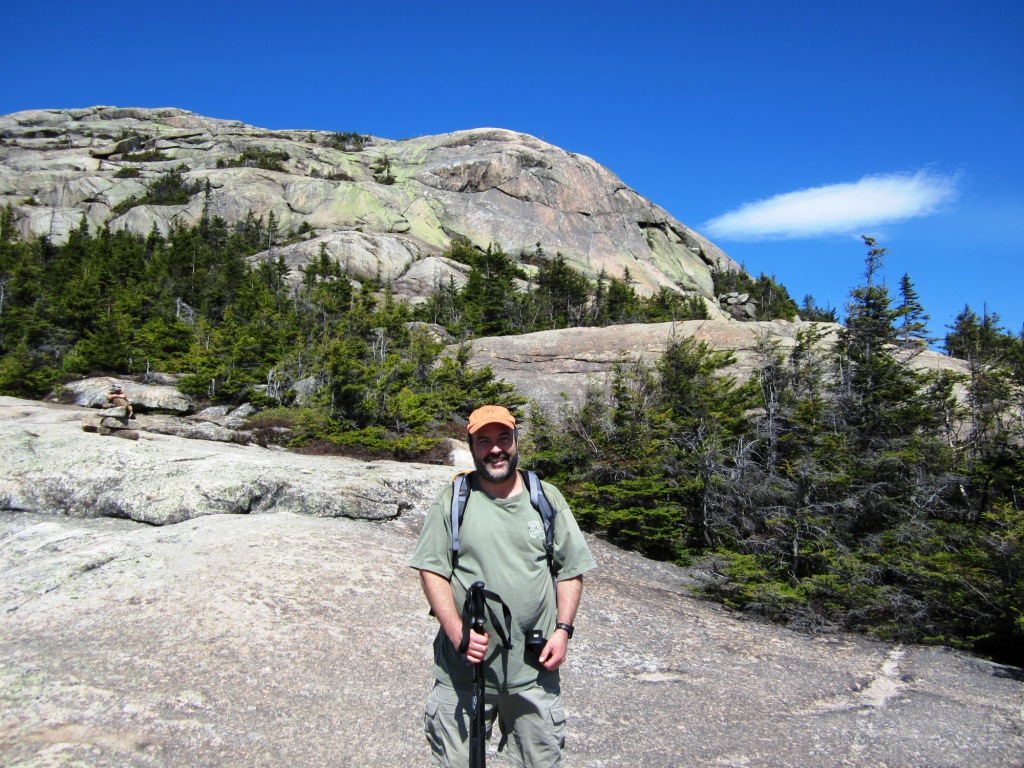 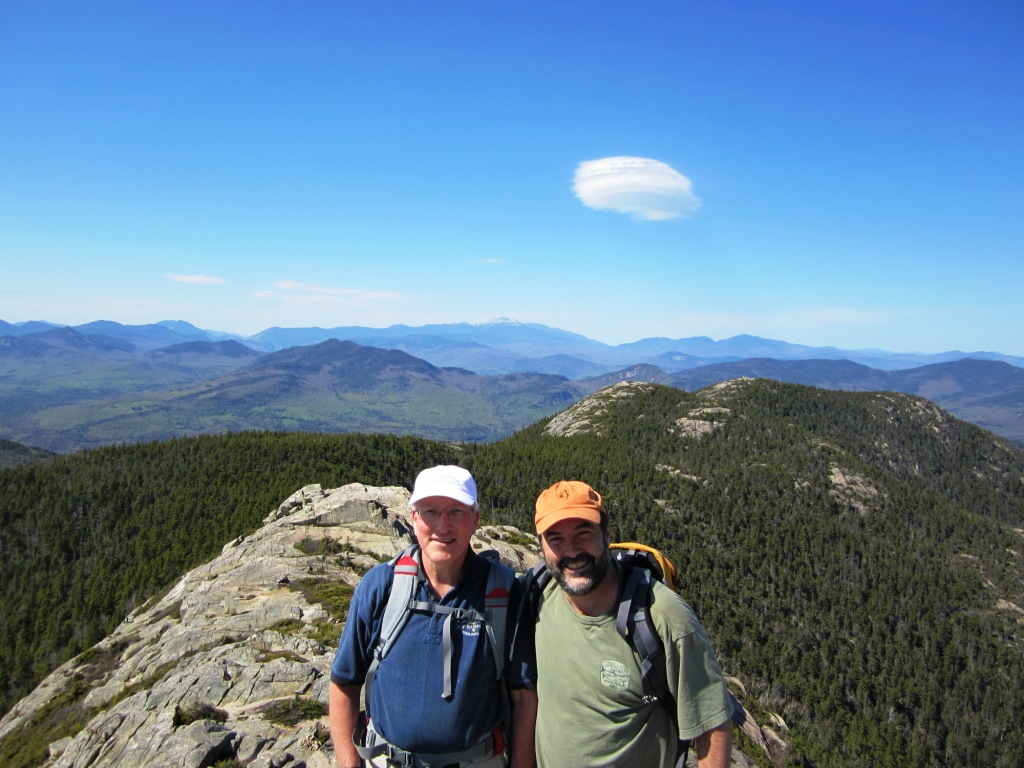 We continued on to the top amid fantastic views. The top itself is very unusual (left) - a rounded mass of ledgy rock, like a whale's back, with green and pink fungi colors. A final push and we were at the top, where there were a few people but definitely not a crowd. We got our picture taken looking toward Mt. Washington (right), which was still white with snow (Mt. Washington is in the back between our two heads). It was very windy at the top - one minute after this picture was taken Roger would lose his cap in a gust,not to be found again. 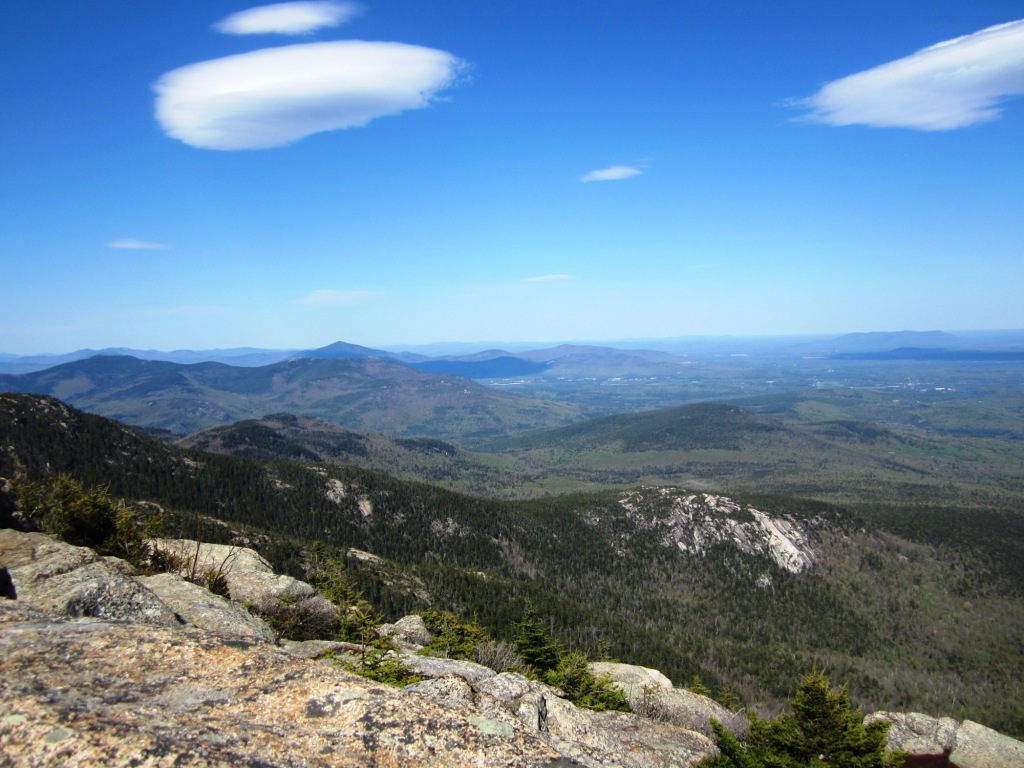 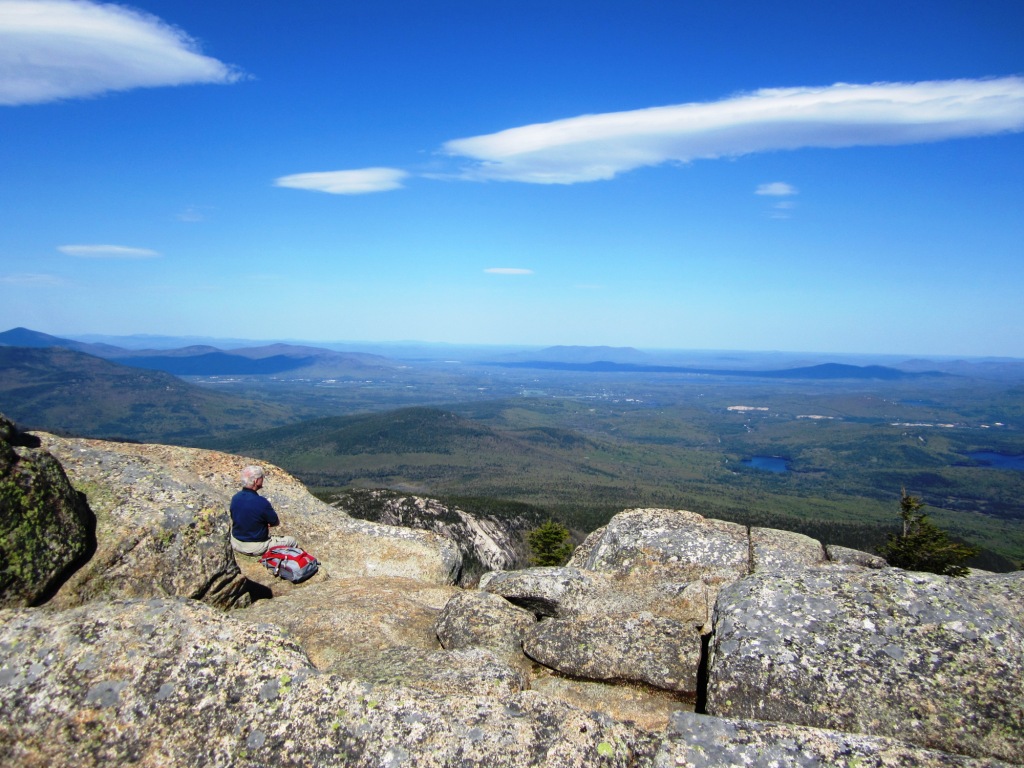 The views from Chocorua are superlative. Adding to the spectacle were beautiful lenticular clouds that looked like UFOs (left). Because Chocorua is a low mountain, the surrounding mountains and lowlands look very close - at right is the view north to Conway. This is in contrast to Mt. Washington where everything seems distant. The dry and windy conditions on this May day also made for excellent visibility, free of the summertime haze caused by long-range transport of pollution. 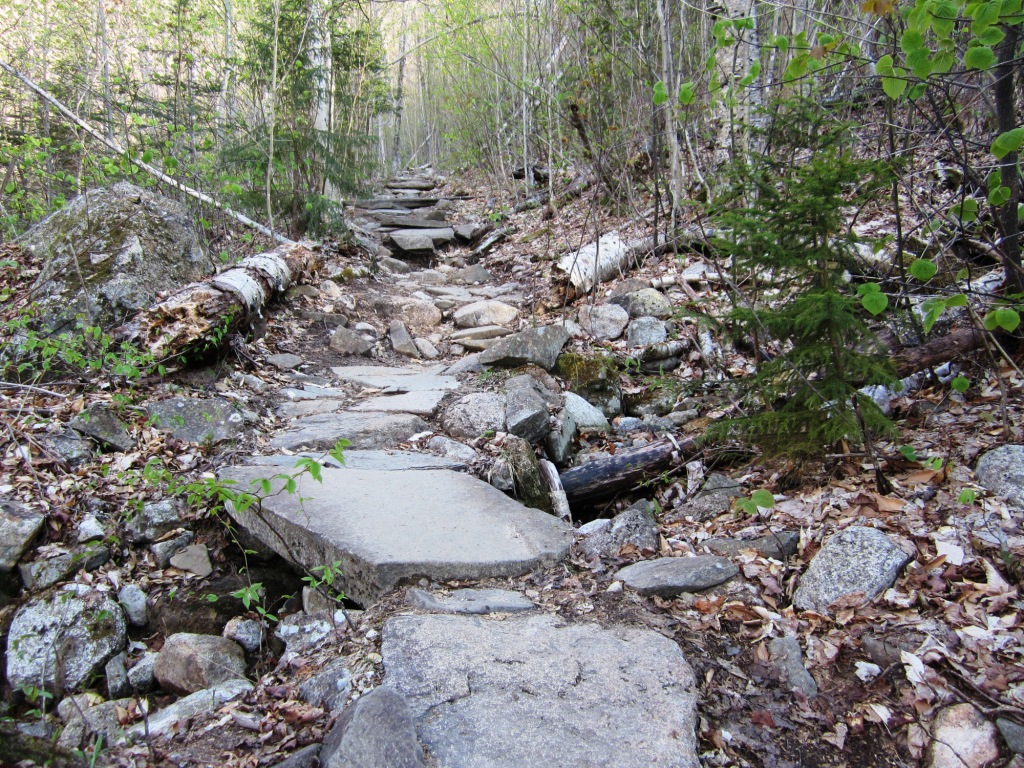 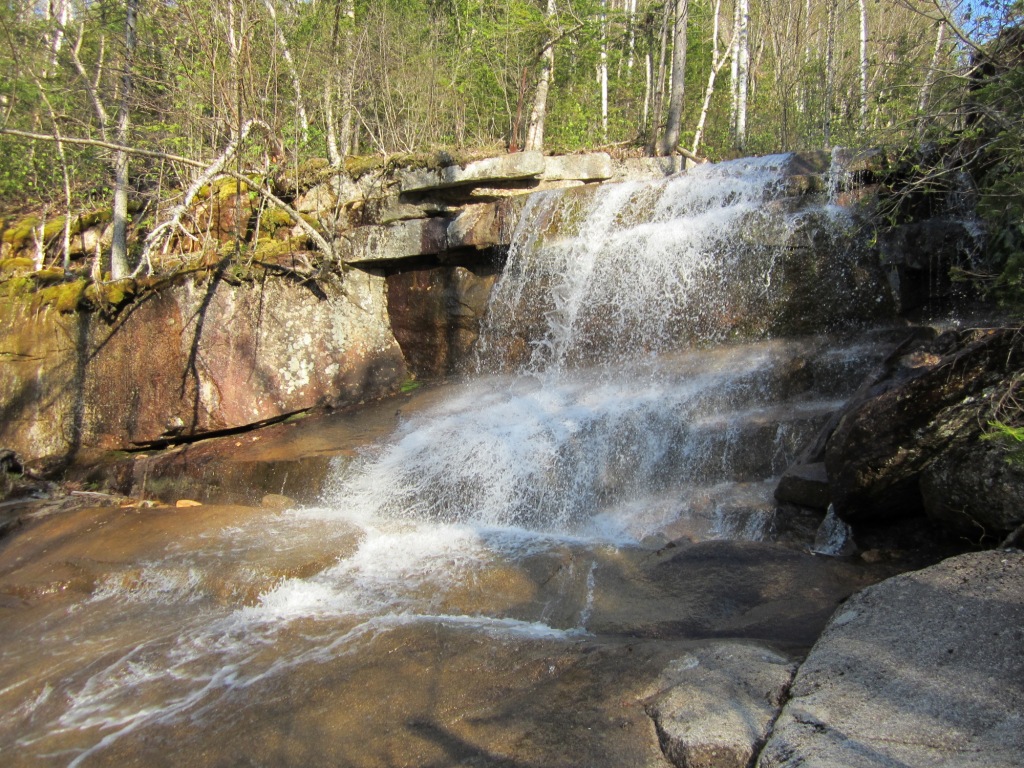 At the top of the mountain we got a cell phone signal, and saw that Roger's wife Deb had sent us a picture of the post-hike drinks that were waiting for us back in Bretton Woods. It was obviously time to go down. That got interesting because there was no clear trail down and no one left at the top to show us the way. We needed to find the Champney Falls Trail to complete our loop and get back to the Kacamangus. At least we knew the direction that we needed to take and so we hopped from ledge to ledge, occasionally seeing faint yellow blazes on the rock. Eventually we got into the trees, where there was a clear trail, and a little further we saw a trail sign. Champney Falls Trail is an odd trail - some parts are really rocky and rough, while others display amazing trailwork of paving with large flat slabs (left - the largest slab is actually a bridge over a stream). Close to the trailhead there is a loop trail to Pitcher and Champney Falls that is well worth it (Champney Falls at right). In the end this was an 8-hour hike, much longer than we expected for Chocorua! But we climbed a respectable 3,200' in total and the top of Chocorua is too beautiful not to linger.