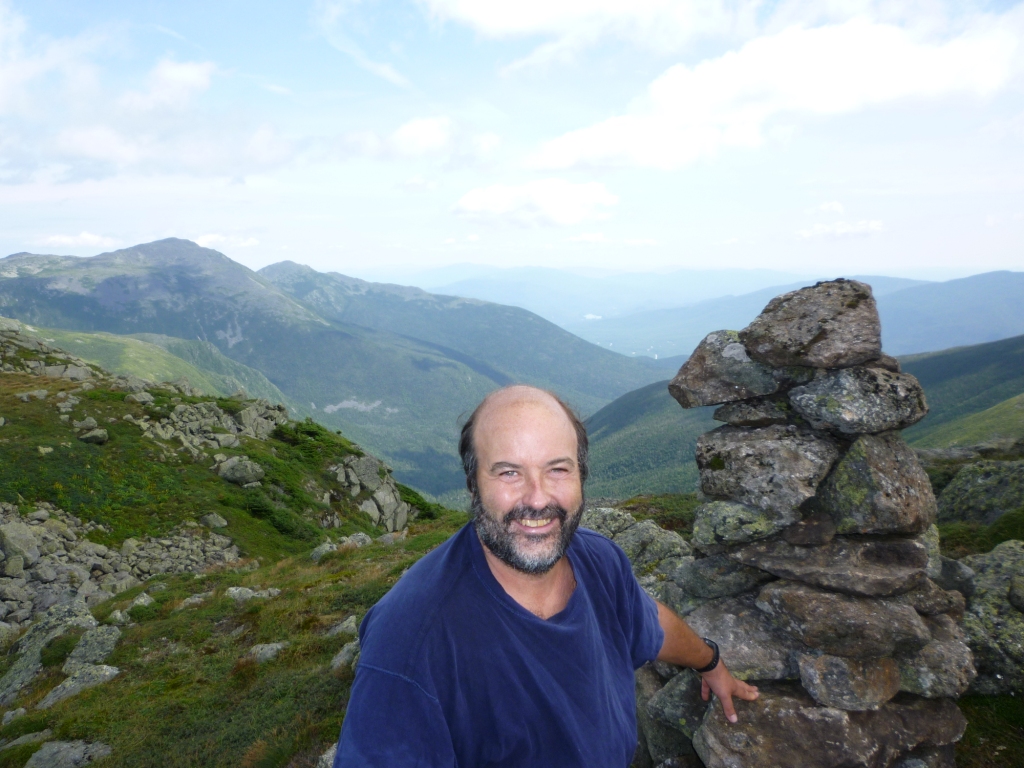 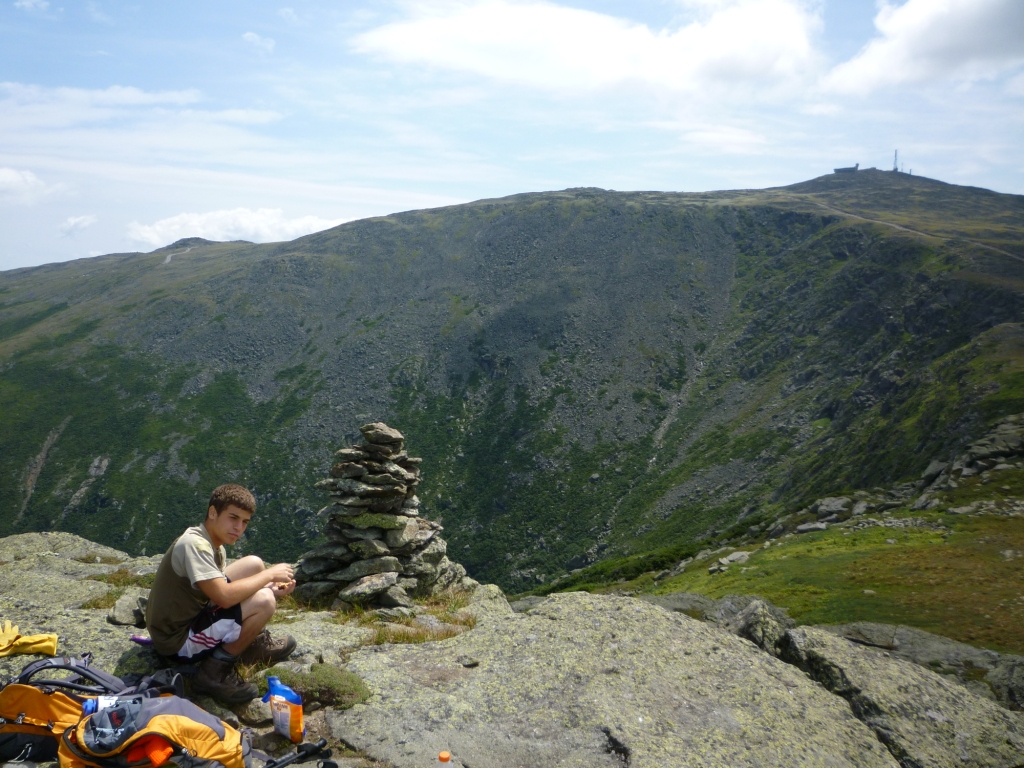 On his continuing quest to climb all the 4,000 footers before his 18th birthday, my son Alex targeted Adams and Madison today, and I wanted to combine this with a cairn-repair visit to my Mt. Clay Loop Trail (see report on July 30 hike). So we set off on a Northern Presidentials traverse starting from the Jewell trailhead and finishing at the Appalachia trailhead where my wife Janice would kindly pick us up. The Jewell is an unspectacular but very nice trail to get above tree line, with good footing and grading throughout. We got to the Gulfside trail and from there could see the Mt. Clay Loop cairn that Roger Gagne and I had built a week ago, still standing proud and erect against the sky. We cut over to Mt. Clay Loop, stopping along the way to eat the blueberries, and I stood with pride next to my week-old cairn (left). Then Alex and I found another cairn in major disrepair on a knoll and repaired it, with some big stones that we had to slowly roll to the site. Here's Alex with our new cairn and Mt. Washington in the background (right). 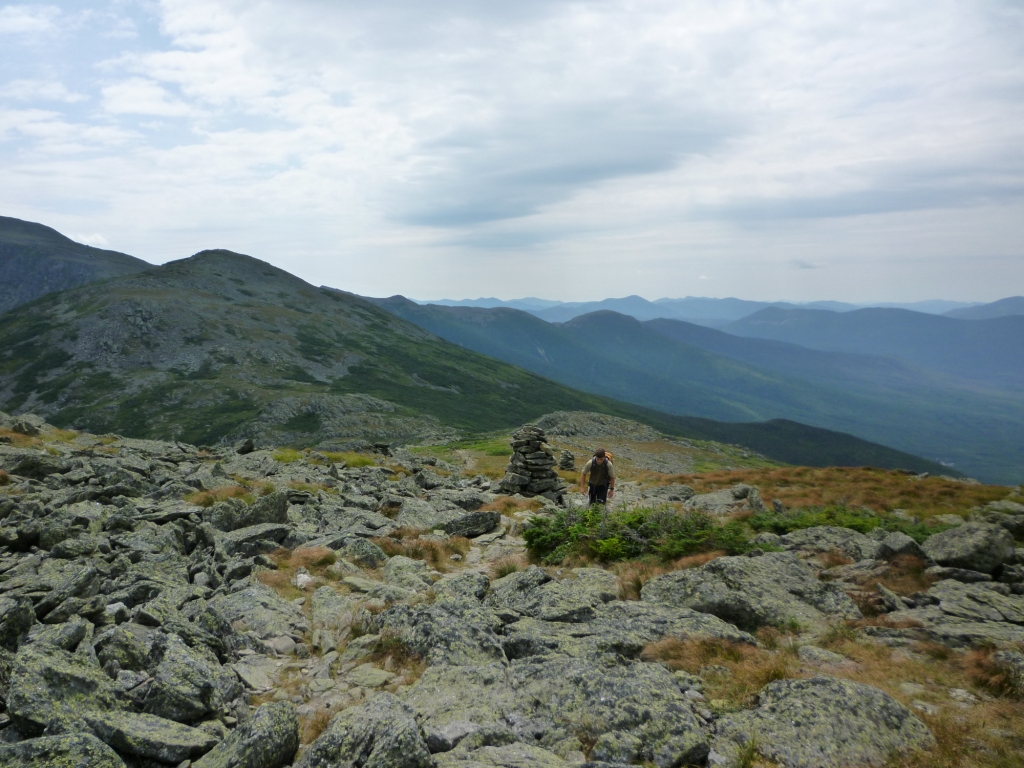 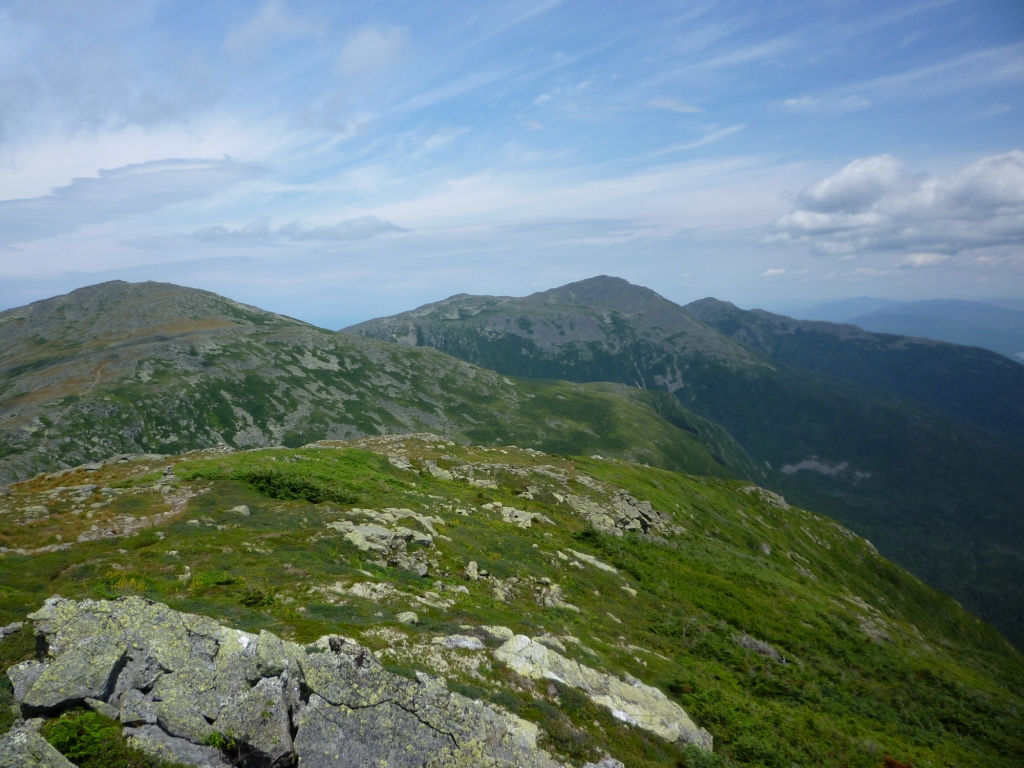 I can't say enough about how nice the views are on the top of Mt. Clay. At left is the view looking towards the southern Presidentials, and at right is the view looking towards the northen Presidentials (from left Jefferson, Adams, Madison). Also to the east is a view of the Great Gulf and to the west a view of Bretton Woods. In addition, whereas the other big peaks in the northern Presidentials are just jumbled slabs of rock, Mt. Clay has beautiful tundra vegetation cover and the footing is good throughout. See the report on my July 30 hike for more pictures from Mt. Clay. 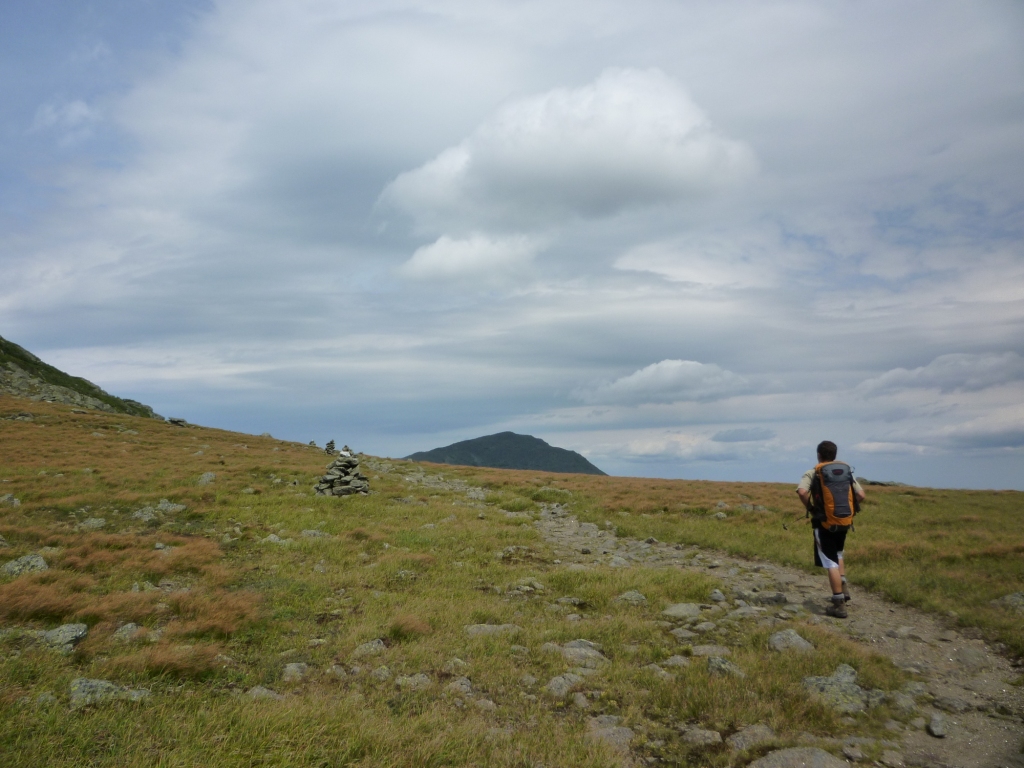 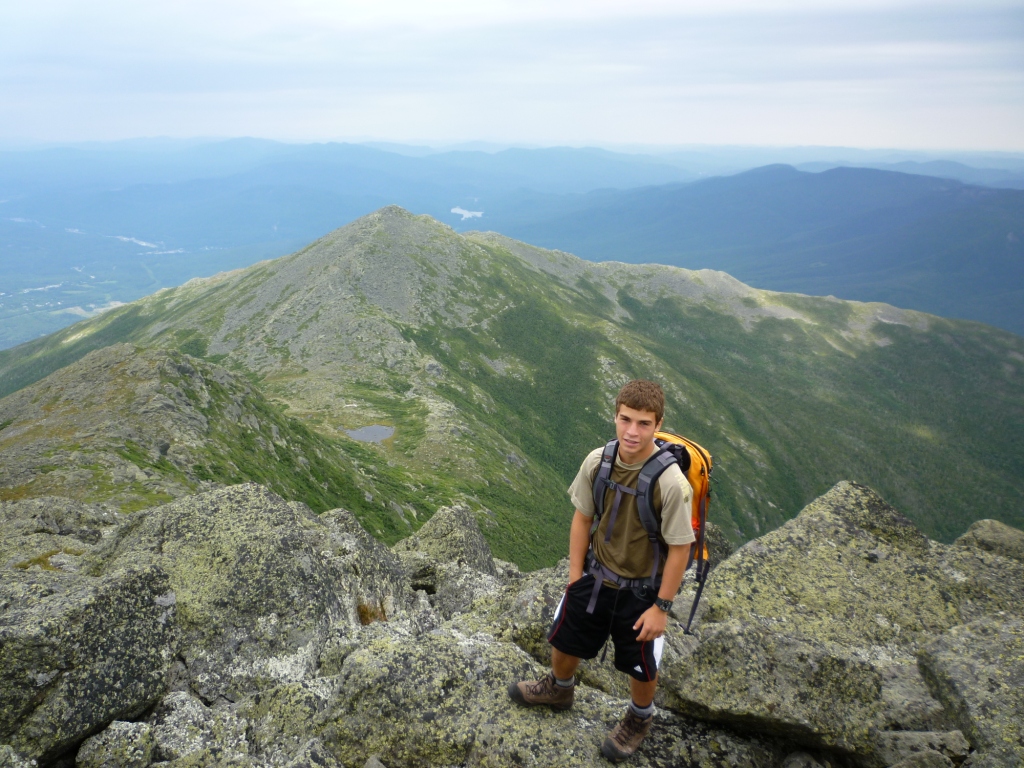 But today we had no time to waste as Adams and Madison were waiting for us. Alex had previously done Mt. Jefferson in the fog back in June 2004 (here he is in 2004 at the top with my other son Oscar). So we circumvented it by taking the Gulfside trail, featuring bautiful lawns with a view of Mt. Adams in the background (left) followed by a real tough scramble down to Edmands Col. From Edmands Col it was up towards Adams, which we climbed by the loop from Gulfside Trail. This is not as much a trail as rock scrambling and boulder hopping. On the right is Alex at the top of Adams, with the view looking down to Star Lake and Mt. Madison, where we were headed next. 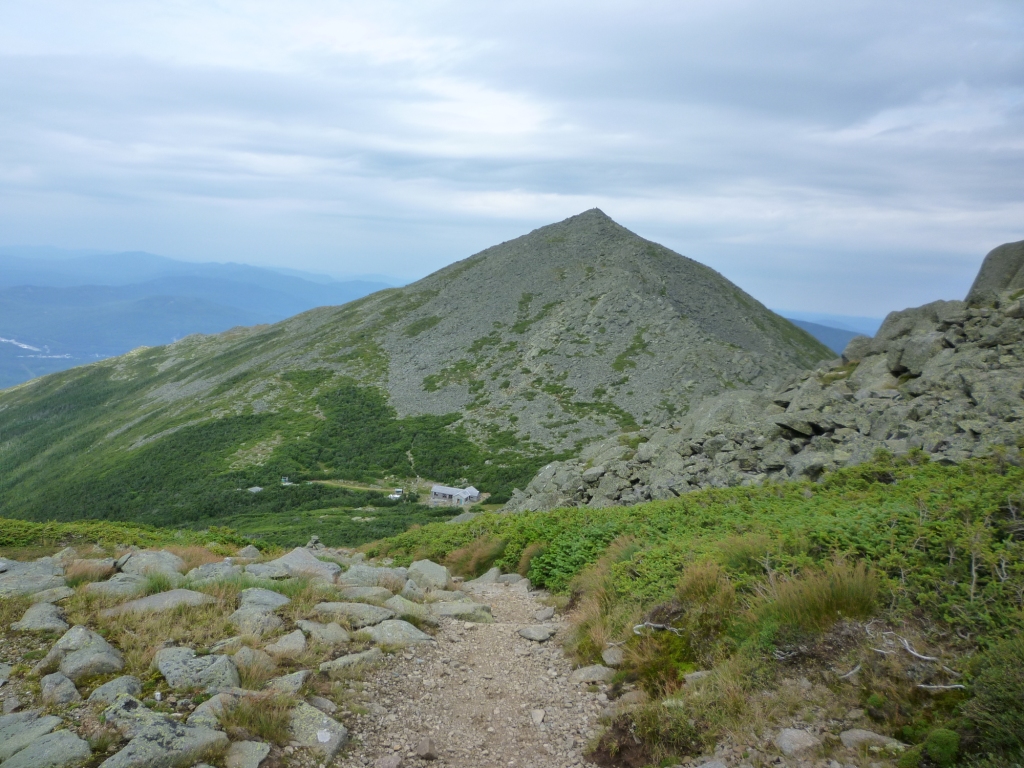 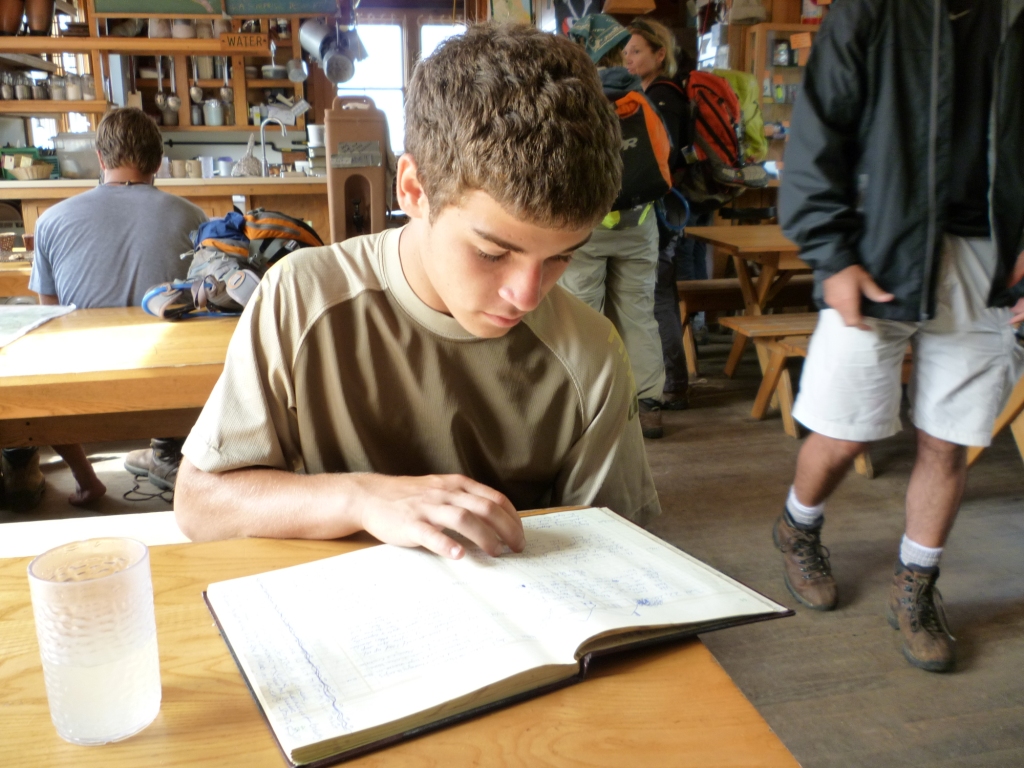 Back on the Gulfside Trail Madison Hut soon came into view (left). I had stayed there with the kids on our Presidential Traverse six years ago. We stopped at the hut for some lemonade, and Alex leafed through the hut journal (right) to find his entry from 2004. I had taken a picture of his entry on my big solo hike in the northern Presidentials last year, check out that link and enjoy more great pictures of the area. 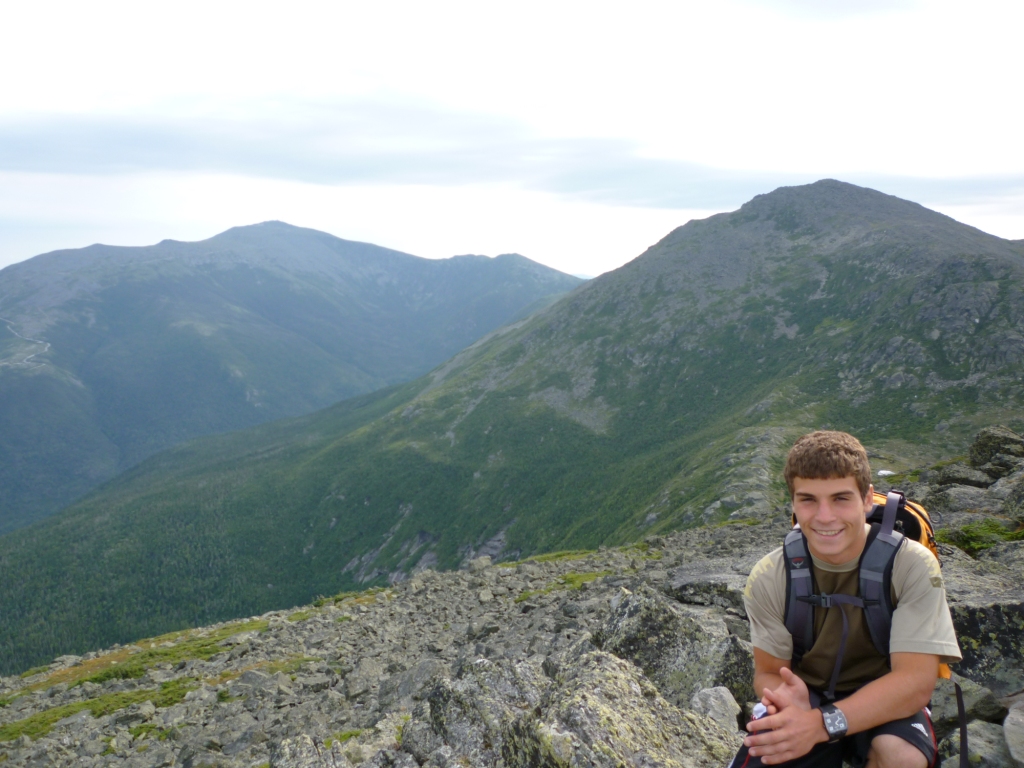 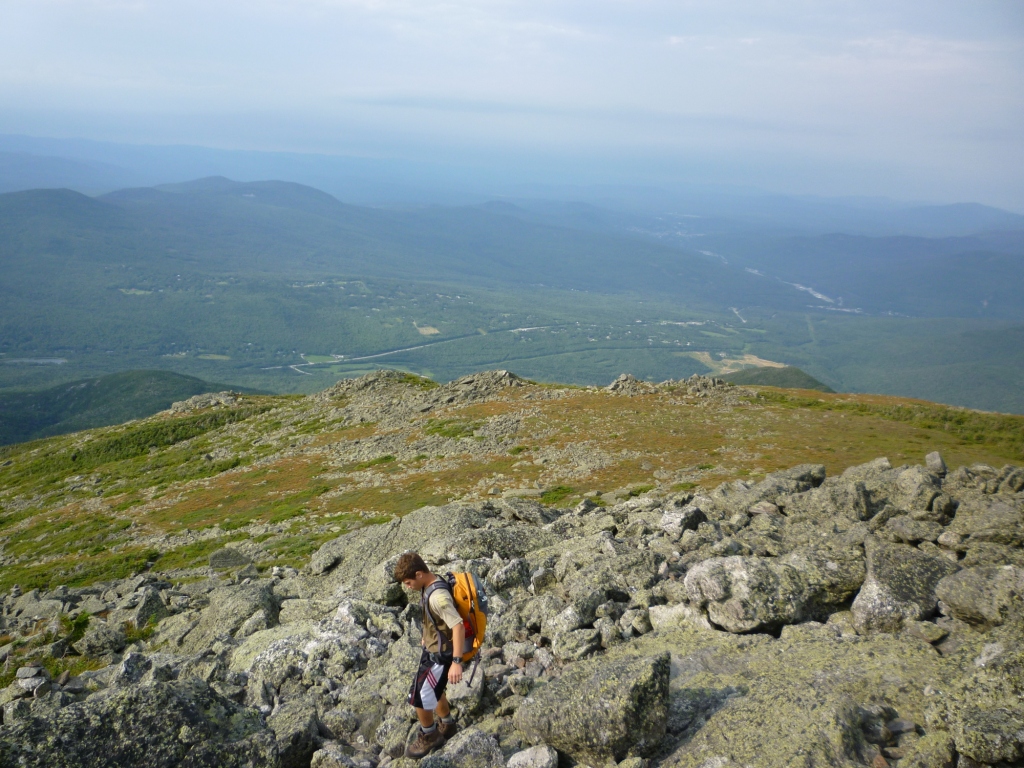 Getting up from Mt. Madison Hut our legs started to protest, because we had already done more than the standard amount of rock scrambling, but we still had to continue up Mt. Madison. Fortunately the hike from the hut is relatively short and soon Alex was at the top (left, with Mt. Washington and Adams in background) and this was his 31st 4,000 footer - 18 to go! From Mt. Madison we went down Watson Path to connect with the Valley Way and descend to Appalachia. The Watson Path is described in the trail guide as "very steep and rough" and that's an understatement. It takes you on a ridge heading north from Mt. Madison, and that's great because you stay above treeline all the way to 4,300 ft. But the trail is really just a jumble of rocks - see picture on the right. After a full day of rock scrambling and boulder hopping our legs were starting to give out. 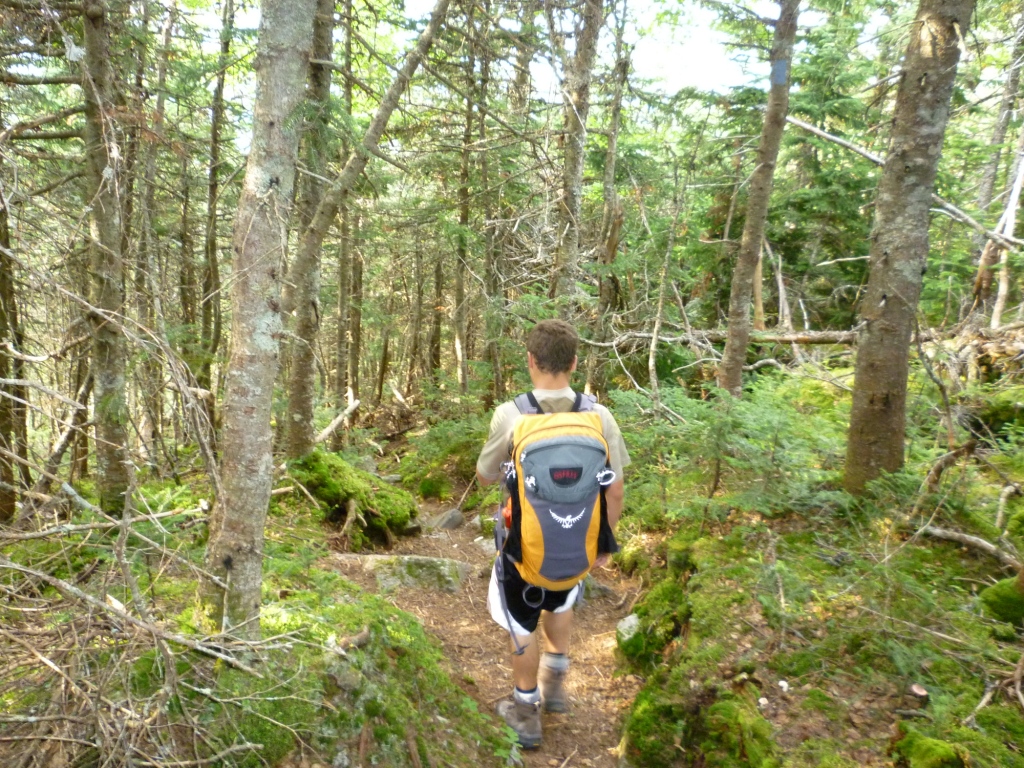 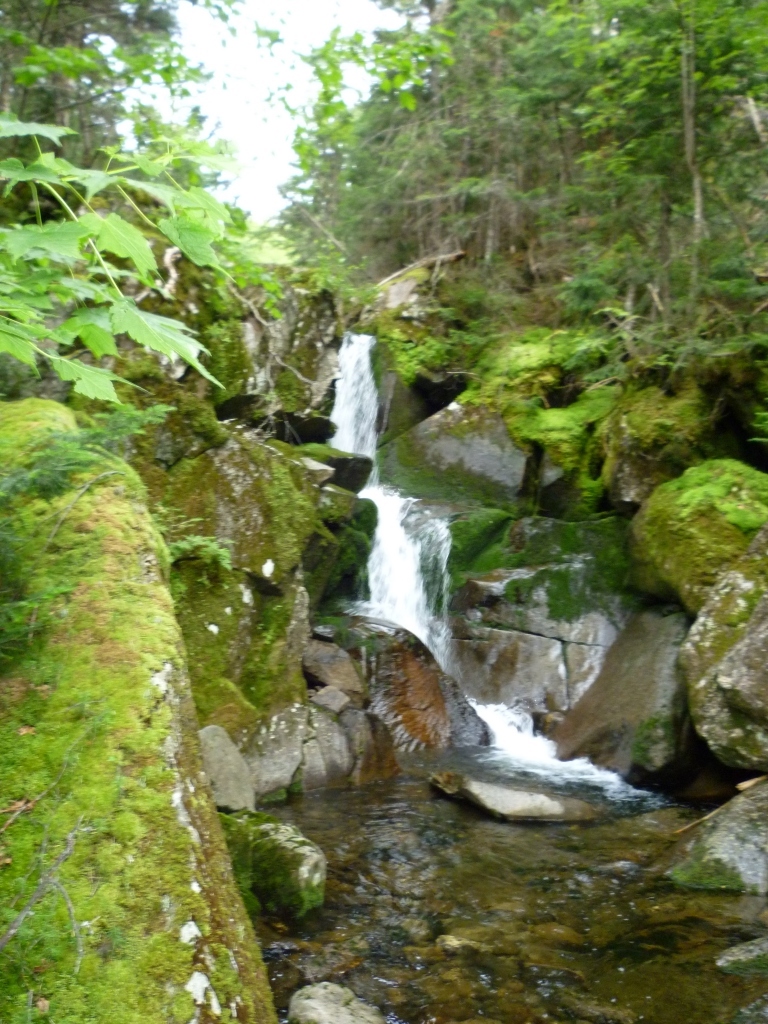 Once you get to the end of the ridge at 4,300 feet the Watson Path goes straight down into the woods (left). And I mean straight down - it remains extremely steep and rough as it beelines down to the valley floor. No wimpy switchbacks here, this is one tough trail. At the bottom of the valley is lovely Duck Fall (right) and from there we connected to the Valley Way and down to Appalachia where we exited at 7:20 pm, Janice patiently waiting for us. This was a long day above treeline, and this has a magical feel - you feel like you're in another world up there. Until next time!