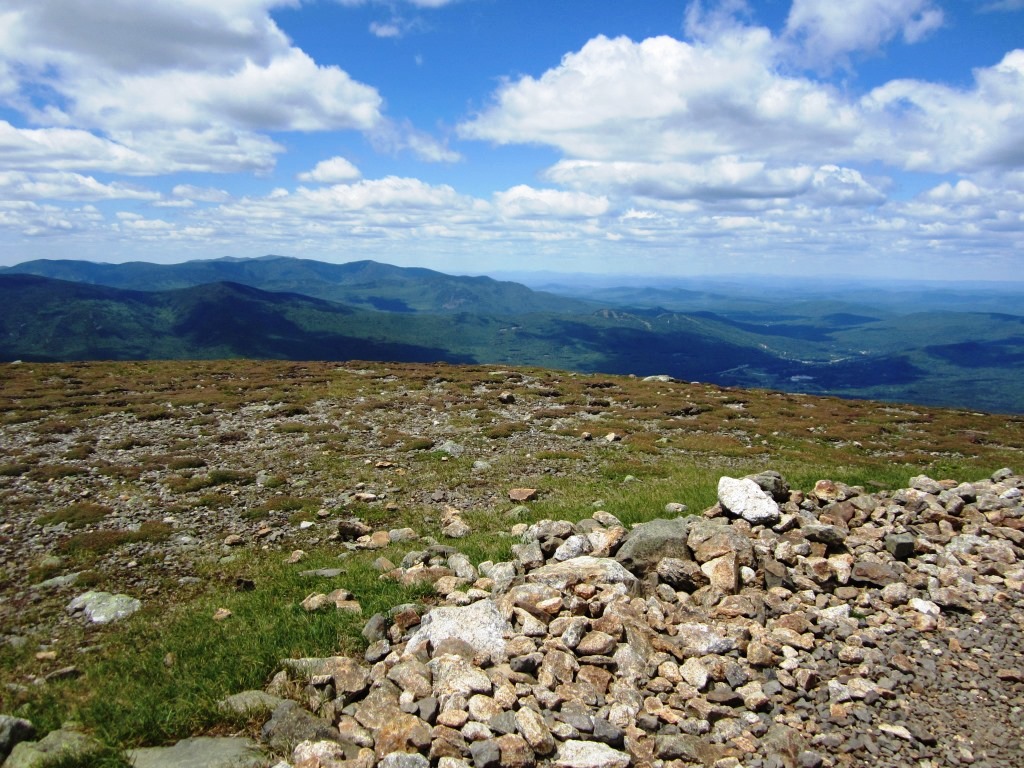 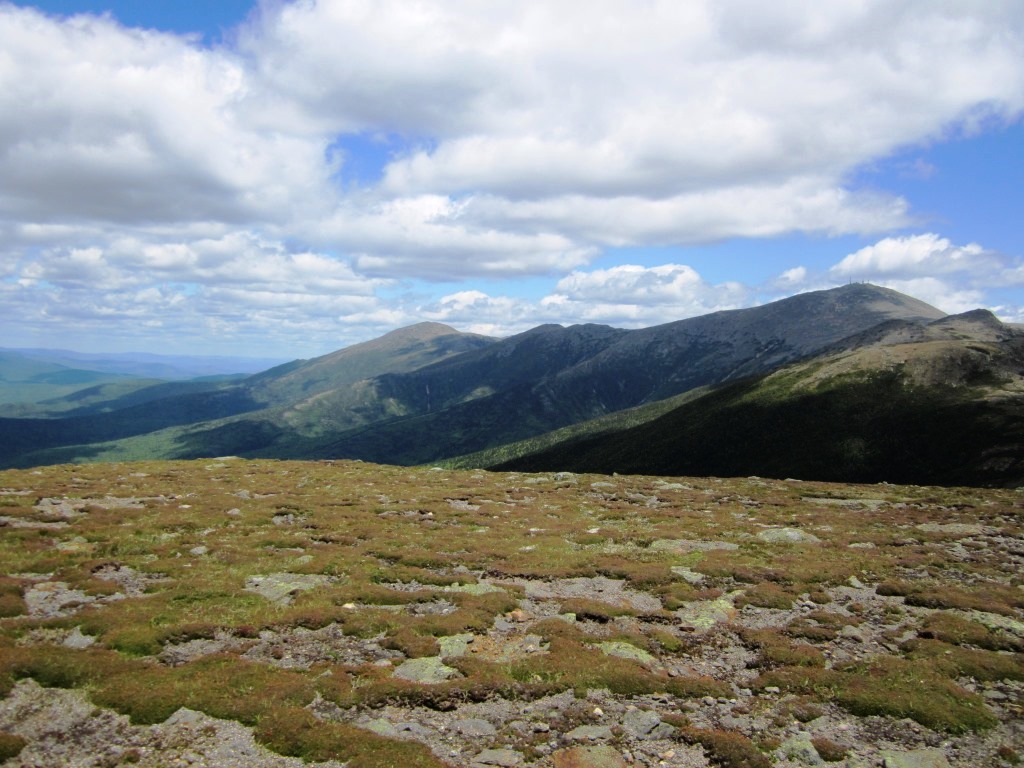 My first post-55 hike! As long as the body can keep up, aging is wonderful and I highly recommend it. Roger Gagne suggested a hike to Eisenhower up the Edmands Path, it was a great day for it and I figured I'd continue on to Monroe. Edmands Path is a very well graded trail that gets you above treeline without effort. From there we took the Eisenhower Loop Trail to the top of Eisenhower, with great 360 degrees view to the south (left) and to the north toward Mt. Washington (right - notice the remarkable Mt. Clay to the left of Washington). 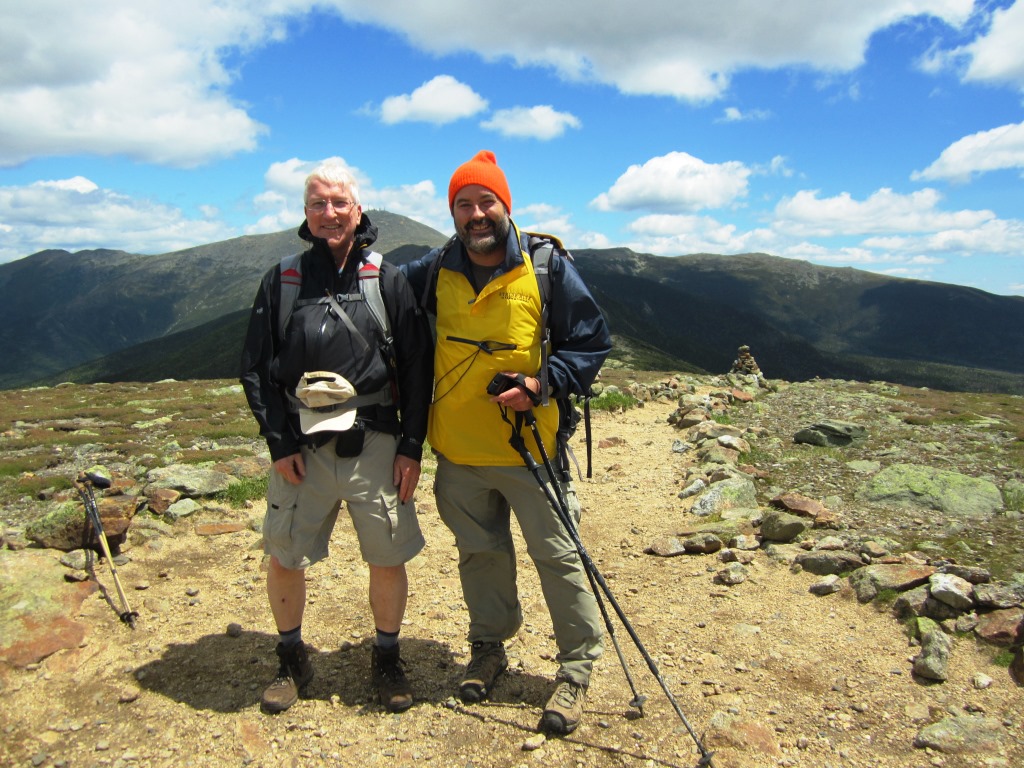 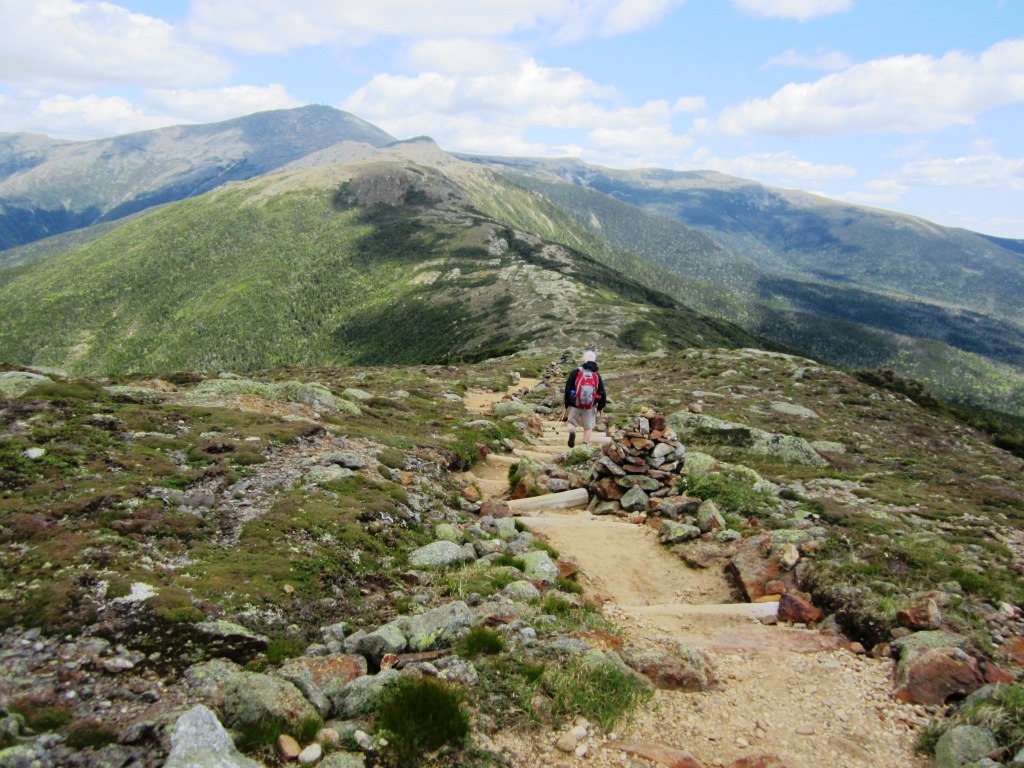 This was Roger's first serious hike of the season and my first venture above treeline of the same, so we were in high spirits (left). The wind was whipping though so we didn't stay too long at the top and headed down to a calmer spot for lunch (right). Notice the remarkable trailsmanship with large logs forming stairs on the trail above treeline - this is not your regular White Mountains trail! 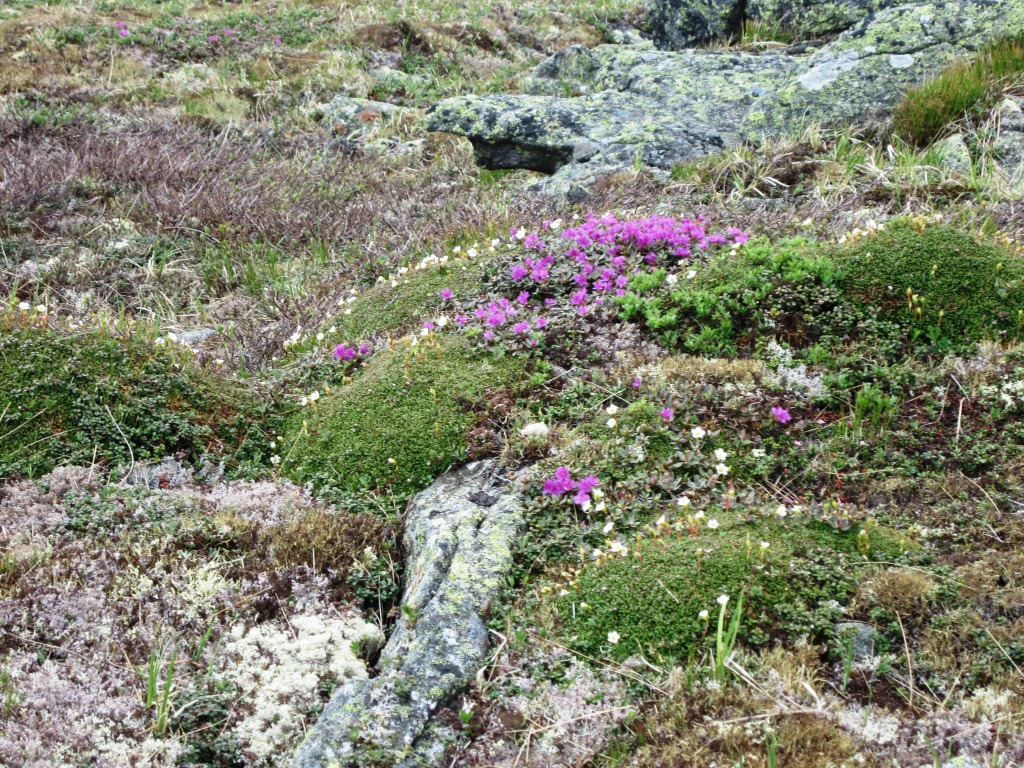 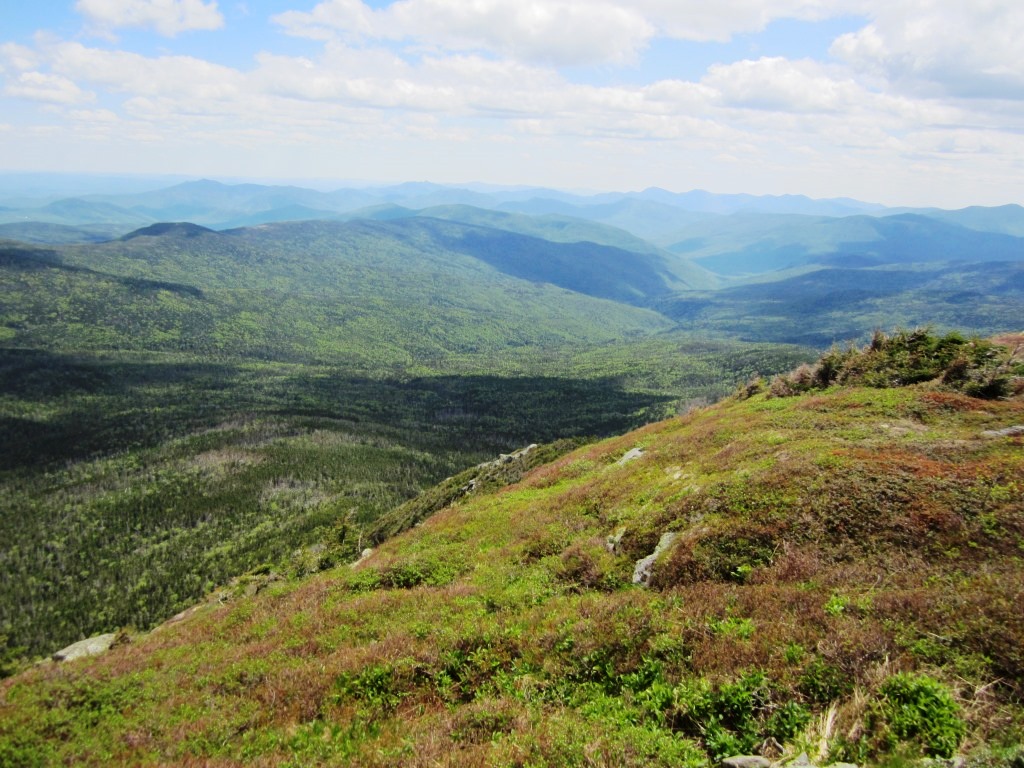 Roger went back down the Edmands Path and I continued north on the Crawford Path, climbing toward Mts. Franklin and Monroe. The wind was still whipping and I had all my layers and gloves on. I couldn't complain though - when there is no wind above treeline in June you can count on annoying black flies. The tundra was carpeted with white and purple flowers (left). As the trail leveled off to a plateau an unmarked side path to the right took me to the official peak of Mt. Franklin, from which there is a good view of the Dry River Valley below (right). 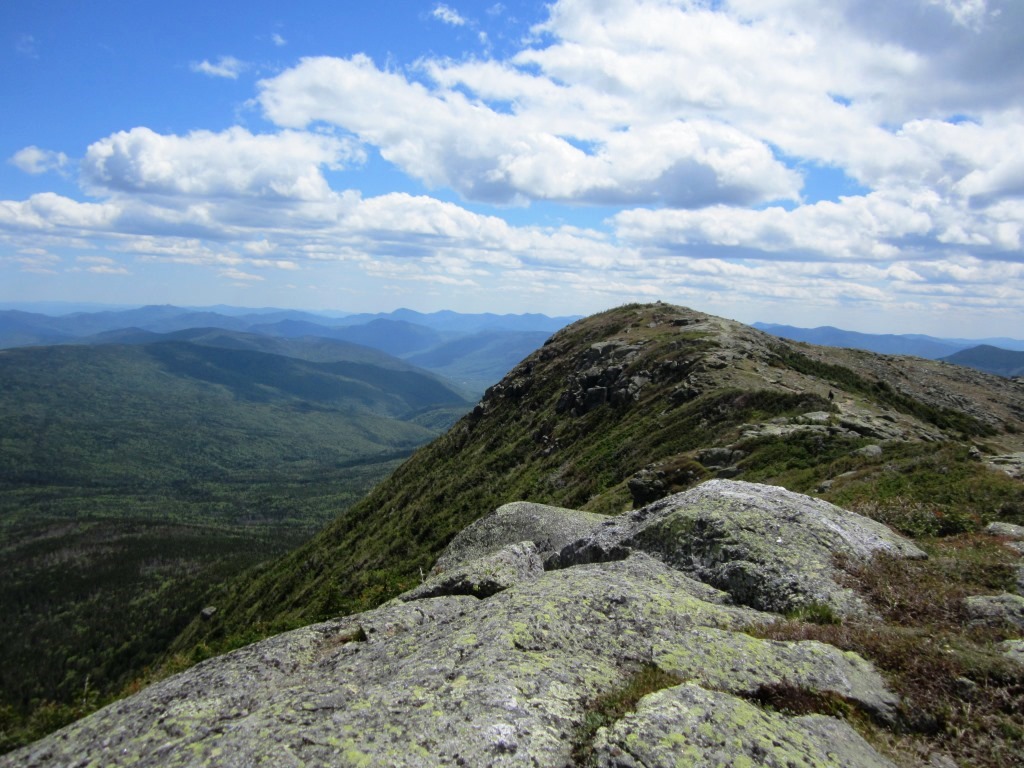 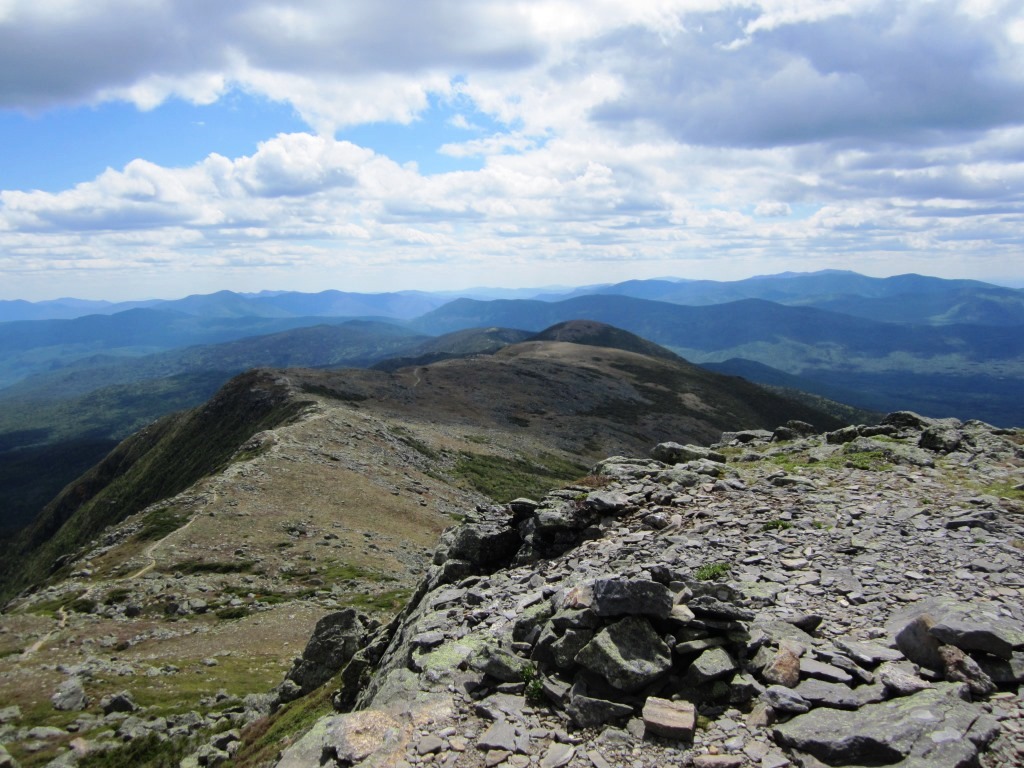 Mt. Franklin doesn't get any respect and deservedly so because it's only a minor bump on the ridge (left). Last time I visited it a year ago it was wrapped in billowing fog, so it was nice to see it in the clear in all its unimpressiveness. Continuing on the Crawford Path I soon diverged left to the Monroe Loop, which took me over the two peaks of Monroe. From there I had a great view south of the whole southern Presidentials ridge (right). 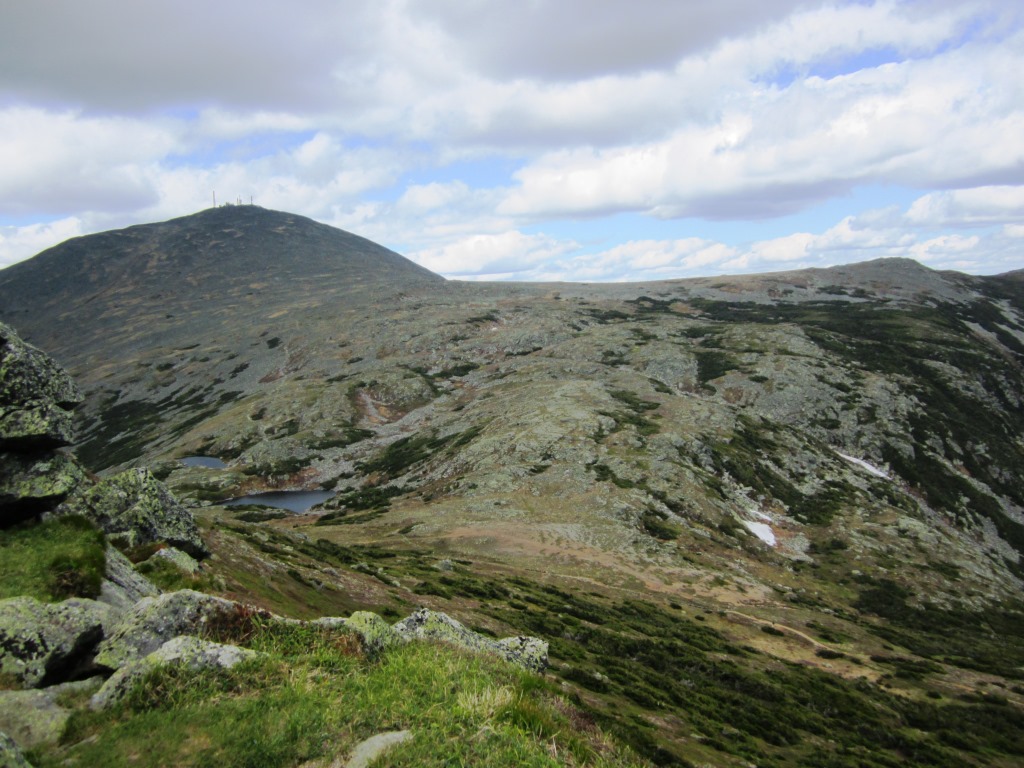 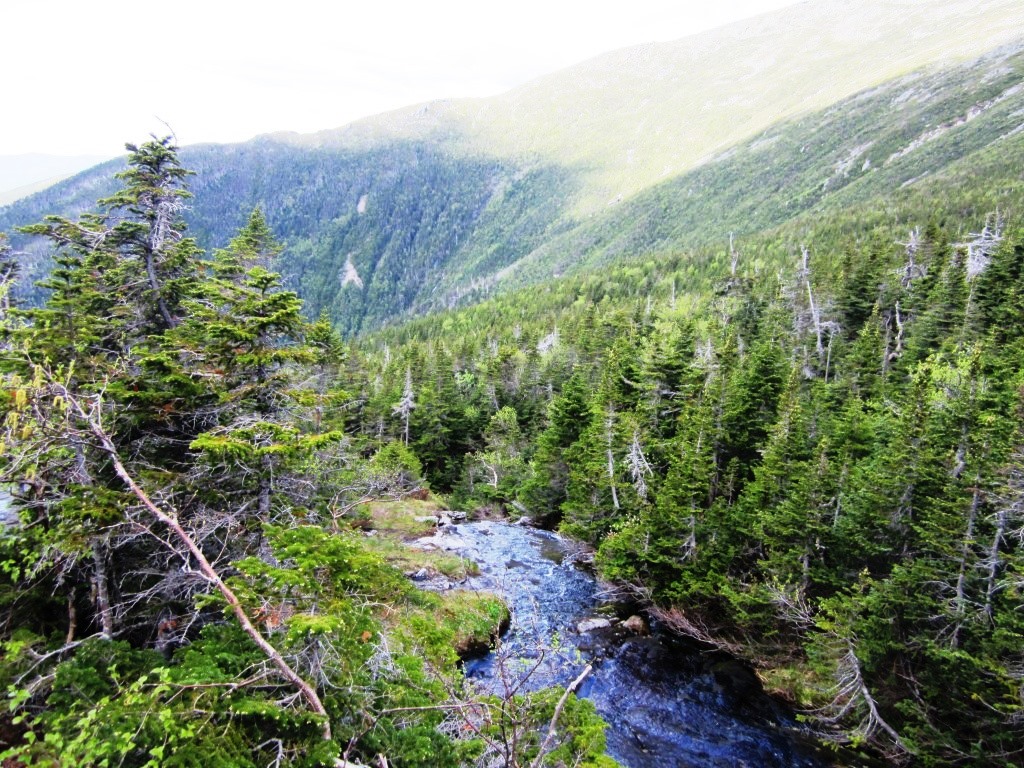 I had expected to see more snow on this hike, considering that just two weeks ago we had tons of snow on Mt. Webster. Now all I could see were a few forlorn patches of snow (left). Turning on my cellphone on the top of Mt. Monroe I got a message from Janice announcing drinks at 5:30, so it was time to get down. I headed down the Ammonoosuc Ravine Trail, where the headwaters of the Ammonoosuc were full of raging water (right) and got down to the Cog parking lot where I hitched a ride back to Bretton Woods.