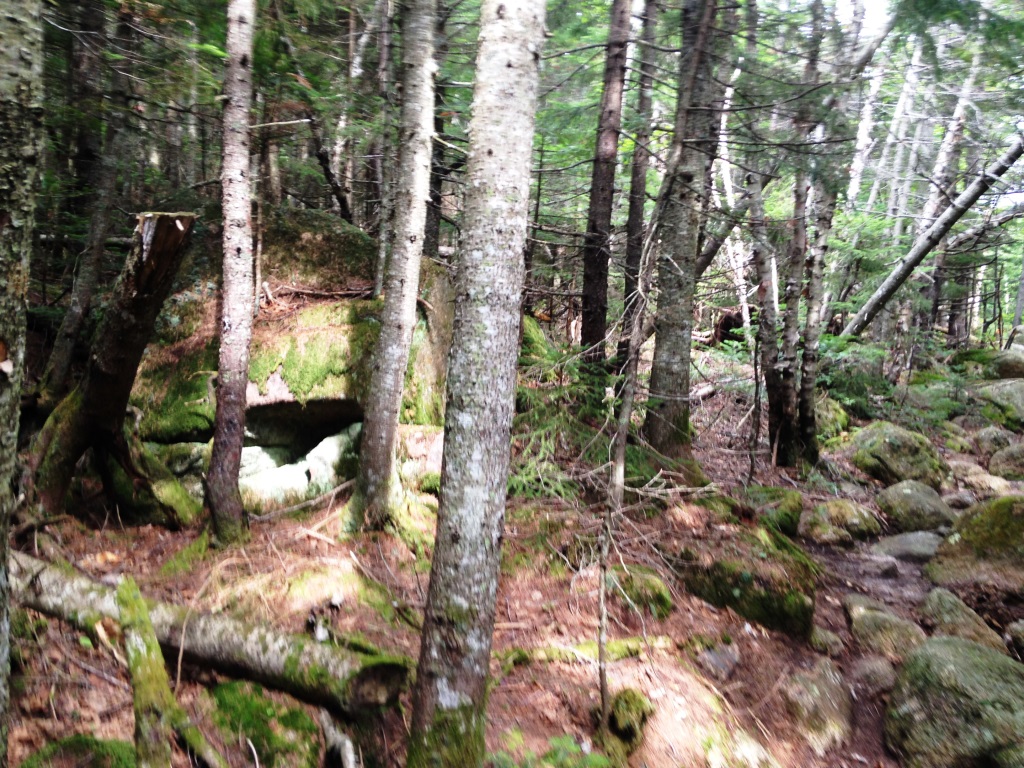 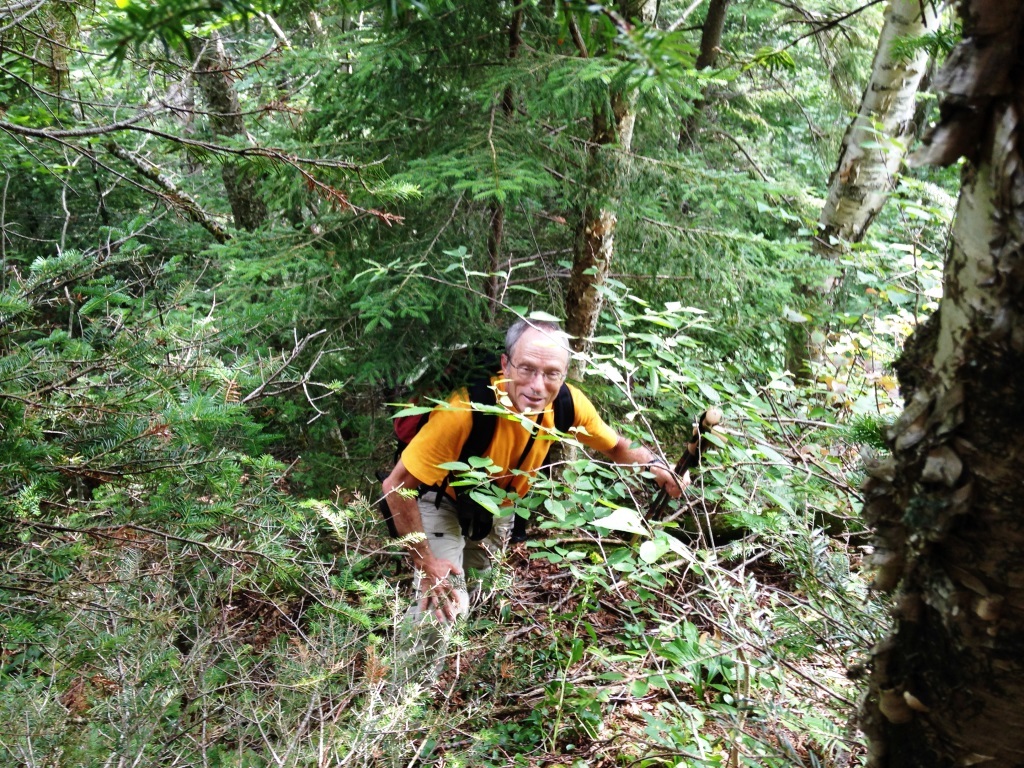 Vose Spur at 3,860' is on the list of New England's 100 highest but there is no trail to it. This had been on Peter and I's list for a while and we decided to do it on the spur of the moment without much planning. We figured it was a simple matter of going to the height of land at Carrigain Notch (2,637' according to the trail guide) and then hacking up the spur which forms the west wall of the notch. I quickly looked up Vose Spur on the web and previous hikers reported a big boulder on the left of the Carrigain Notch Trail as a start of the bushwhack but not to expect much in terms of a herd trail. That seemed like good enough information but things didn't go quite as planned. We got to the height of land at Carrigain Notch and both our altimeters indicated 2,500' not 2,637' We had calibrated our altimeters at the trailhead (1,380' and they couldn't have been that far off. The guide is not usually wrong about altitudes and that disturbed us a bit. Also, we couldn't find an obvious rock at the height of land, though we found a few candidates (left). We followed the trail a bit beyond the height of land and it started to drop off steady. Clearly that wasn't it. So we decided to just start climbing at the height of land. Off we went into the woods (right), climbing steeply and without any sign of a herd path. 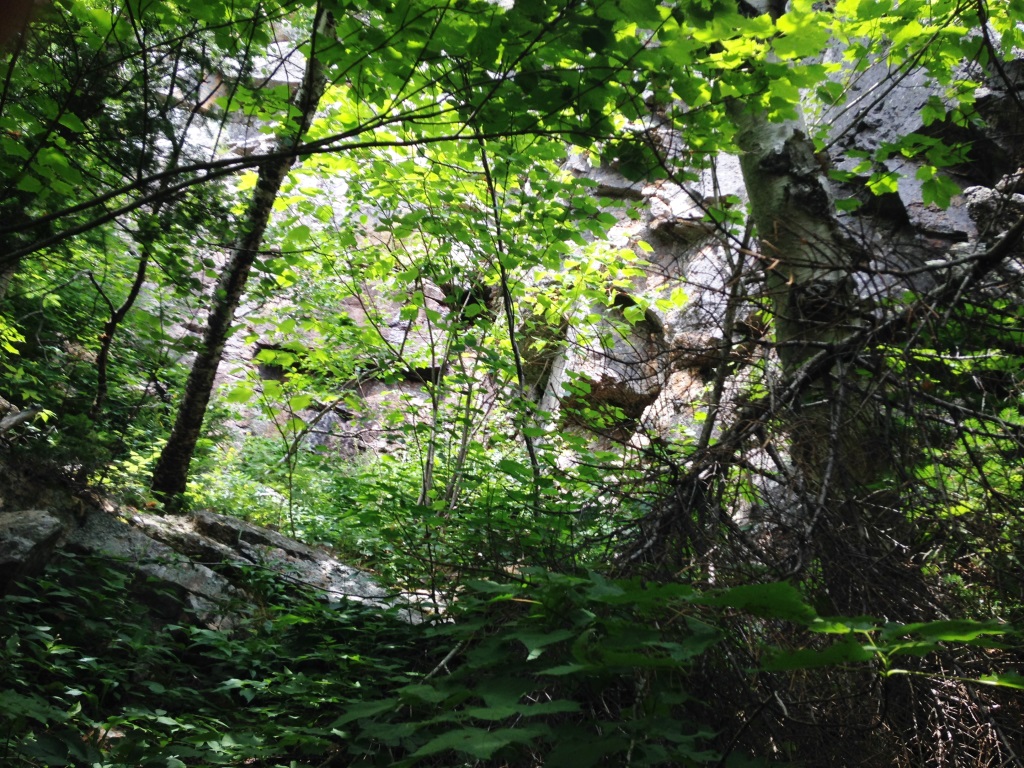 We climbed in that way to 3,200' hacking our way throught spruce and scree, holding on to roots, all hands and feet. We were congratulating ourselves on already being halfway and looking for the talus field described in previous reports. Then we found ourselves at the base of a big cliff (left). I tried to circle the cliff to the left (right) but there was some exposure involved and it didn't seem that there was a clear route. 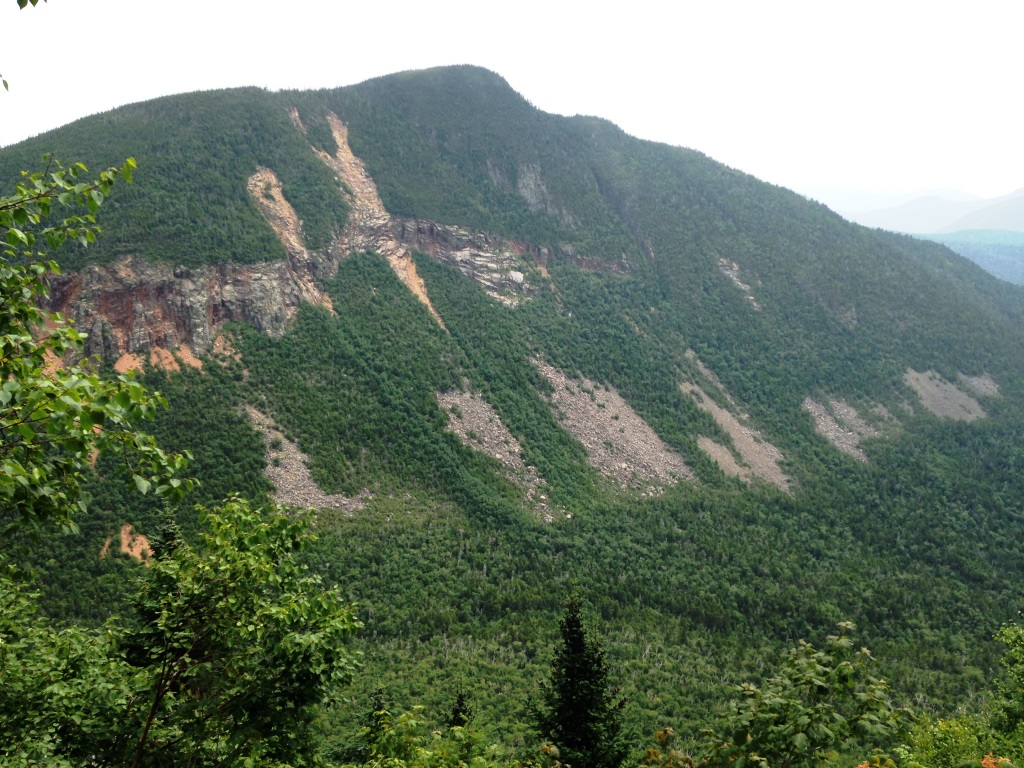 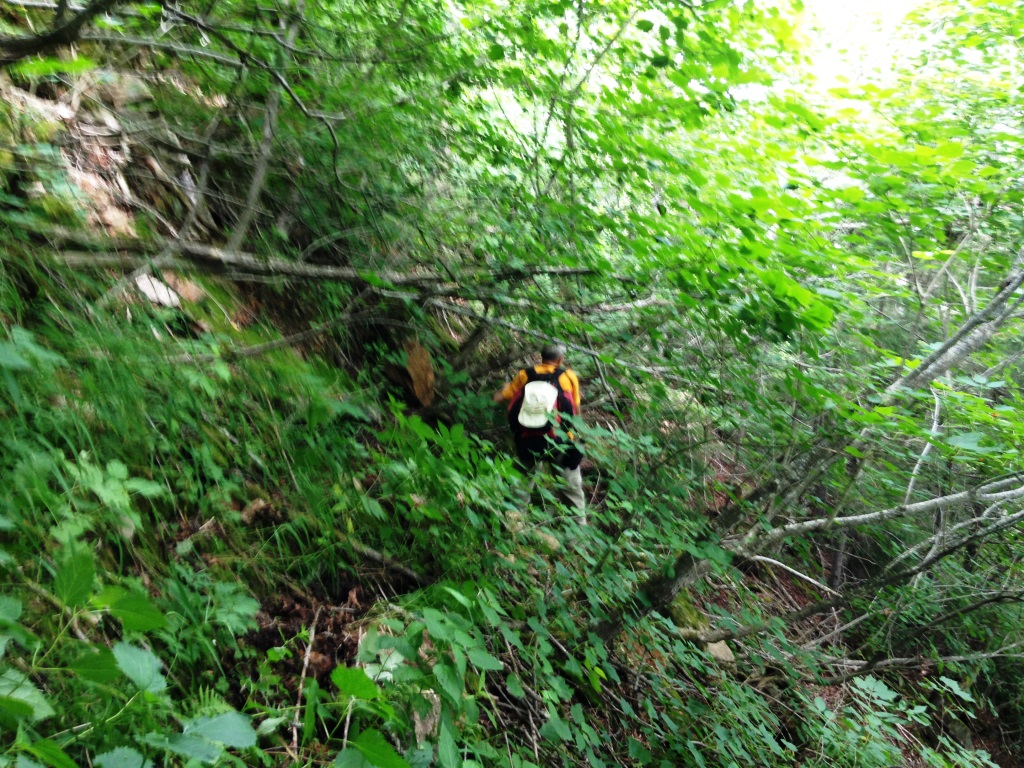 Eventually I got to a small slide that gave me a great view of Mt. Lowell across the notch (left) but could go no further. So we retraced our steps and tried to go around to the right of the cliff. We went some distance that way, eventually going down into a deep drop-off only to see the cliff continue on with no end in sight. There was no clear way up, and even if we managed to find a way up would we be able to find it going down? Clearly this was not the right way. Why had I not studied more the previous hiking reports? I tried getting a signal on my phone to get some Google Earth map or access the hiking reports but no luck. Next time we will be better prepared! For now we took a lunch break, happy at least that we were where no one had likely been for some time (only lost hikers like us!). We decided that discretion was the better part of valor and Vose Spur would wait for another day. 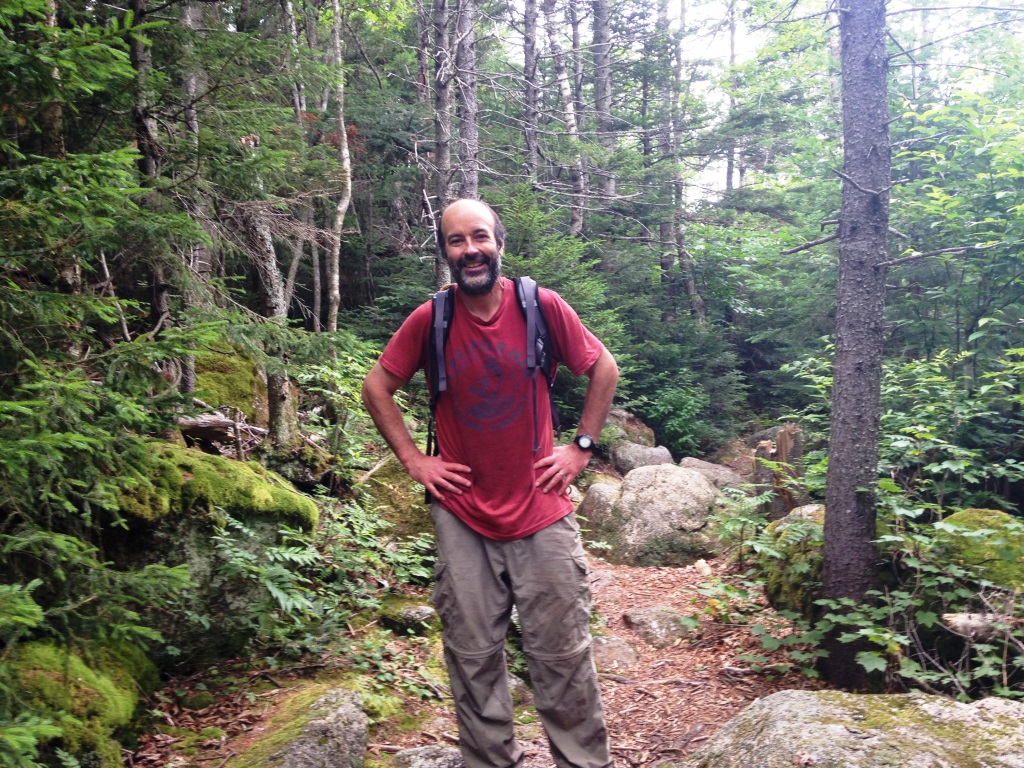 So we went back down and it was fun - holding on to trees, being careful not to fall into spruce holes. At some point we got another nice view of Mt. Lowell. We eventually got back down to the Carrigain Notch Trail at almost exactly the location where we left it (left), further explored both sides of the height-of-land, could not find a big rock from which any kind of herd path would lead, couldn't get a good view of Vose Spur through the trees (would be better after leaves fall off). couldn't get a phone signal to check out those hiking reports, so much for that.

Back in civilization we checked Google Earth and the hiking reports. It turns out that the rock to look for was far below the height of land, in a muddy area ringed with rocks, and we remembered that rock as distinctive but didn't pay attention to it because it was too low down - why wouldn't people start the bushwhack at the height of land? (because of the cliffs, that's why). The Google Earth map (right) shows the cliffs and I added our route and what I think is the standard bushwhack route. We'll get it right next time, stay tuned!