Franconia Ridge is arguably the most scenic hike in the White Mountains and that is no secret, which means that it can be a procession on blue-sky weekends. We did it on a cloudy Friday, and although there were still quite a few people on top of the ridge it wasn't bad. We did the whole ridge, climbing up the Flume Slide Trail and on from Flume to Lafayette, coming down by the Old Bridle Path. The Flume Slide (left and right) is described ominously in the AMC guide as dangerous and all but it's really no problem at all. It's extremely steep and all hands and feet, but there are plenty of trees to hang on to so one doesn't feel the exposure. It doesn't even start to compare to the Six-Husbands Trail or the Huntington Ravine Trail, which I'm glad to have done once but will probably never do again. But the AMC probably feels the need to be ominous because Flume is a popular climb as a 4,000 footer. 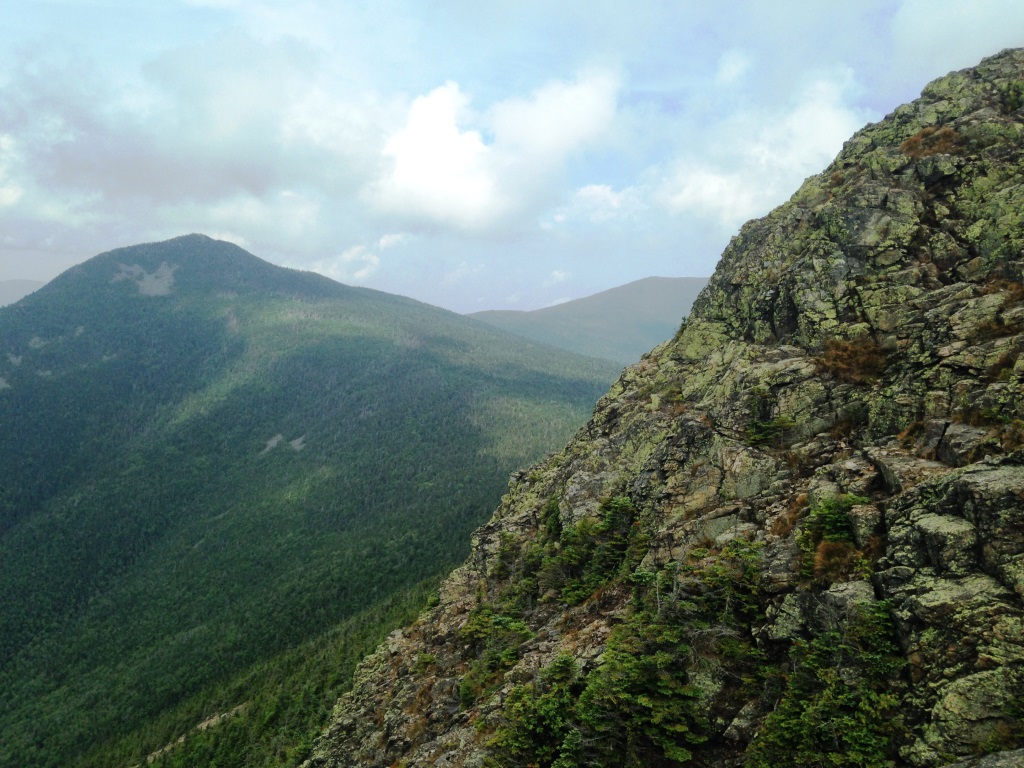 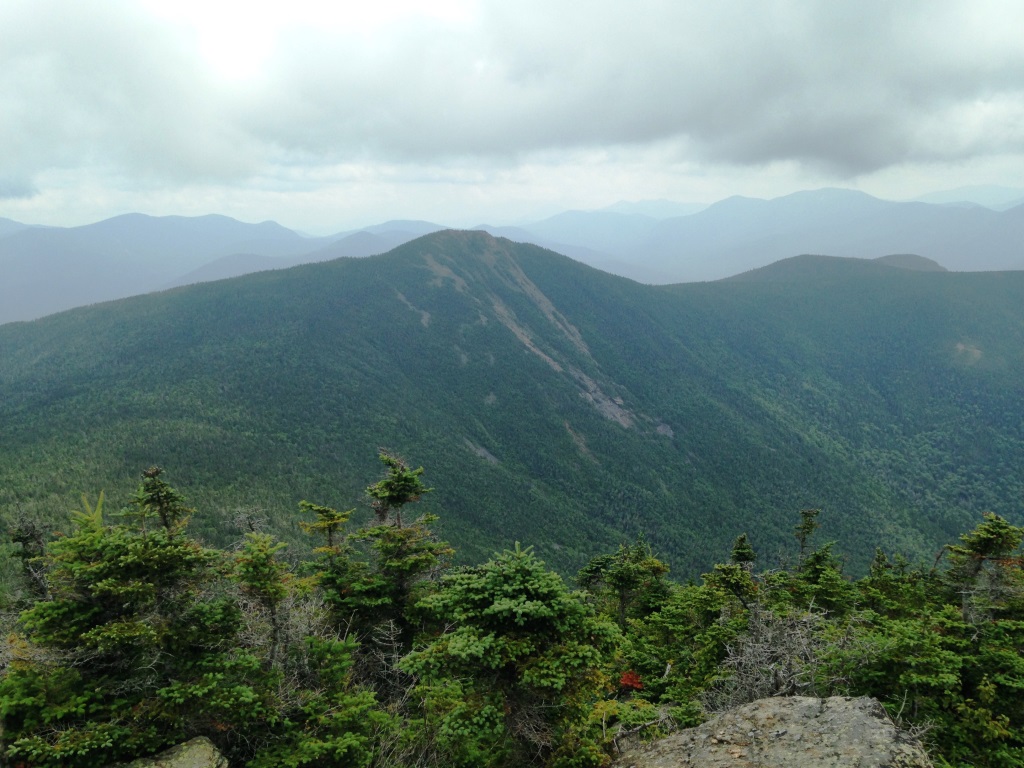 The top of Mt. Flume at 4,260 feet is really spectacular, scarred by cliffs and slides (left, and right as seen from Mt. Liberty). From there we dropped to the col at 3,700 feet and up Mt. Liberty at 4,450 feet with 360 degrees views. We had the top of Flume to ourselves but Liberty was crowded with some loudmouths. Basic etiquette for hikers: talk softly when there are people around. 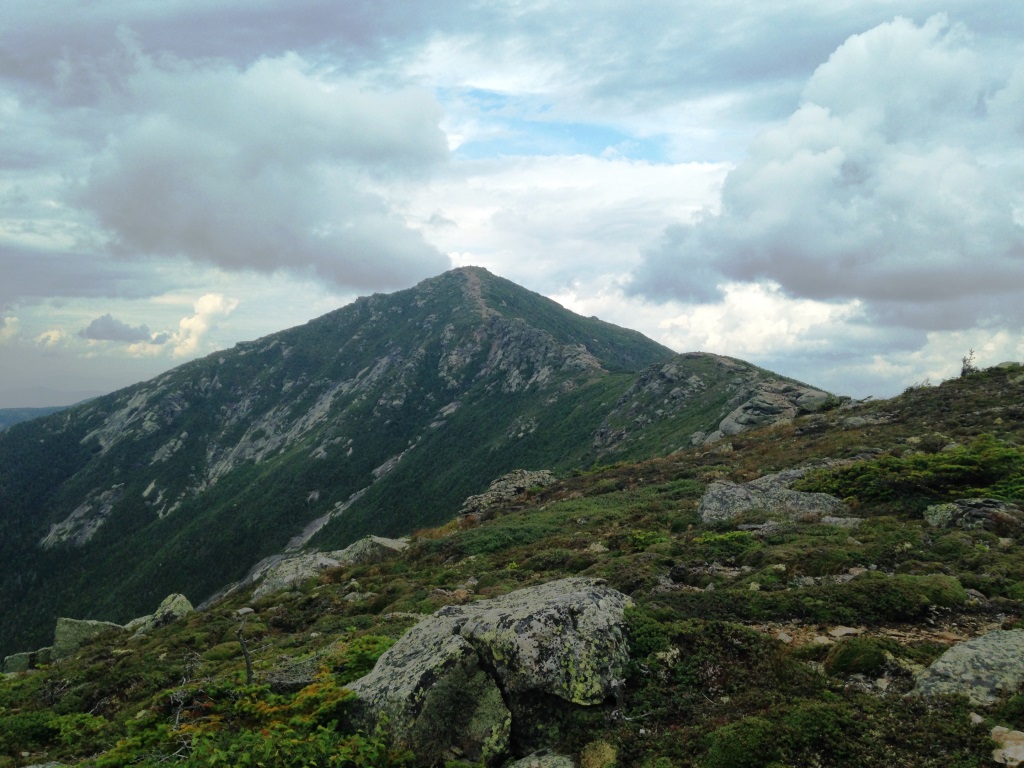 So we didn't stay long at Liberty and dropped to the col at 4,000 feet and up to Little Haystack at 4,700 feet, by which we were fully above treeline and would remain that way all the way to Lafayette. This is the scenic part of the Franconia Ridge where the trail follows a knife edge with great views on all sides (left, the knife edge looking ahead). I was happy to be there (right - Act On Climate, Science Says So! says the T-shirt). The cloudy conditions do not make for the best pictures though - see our previous hike of the Franconia Ridge under blue skies. 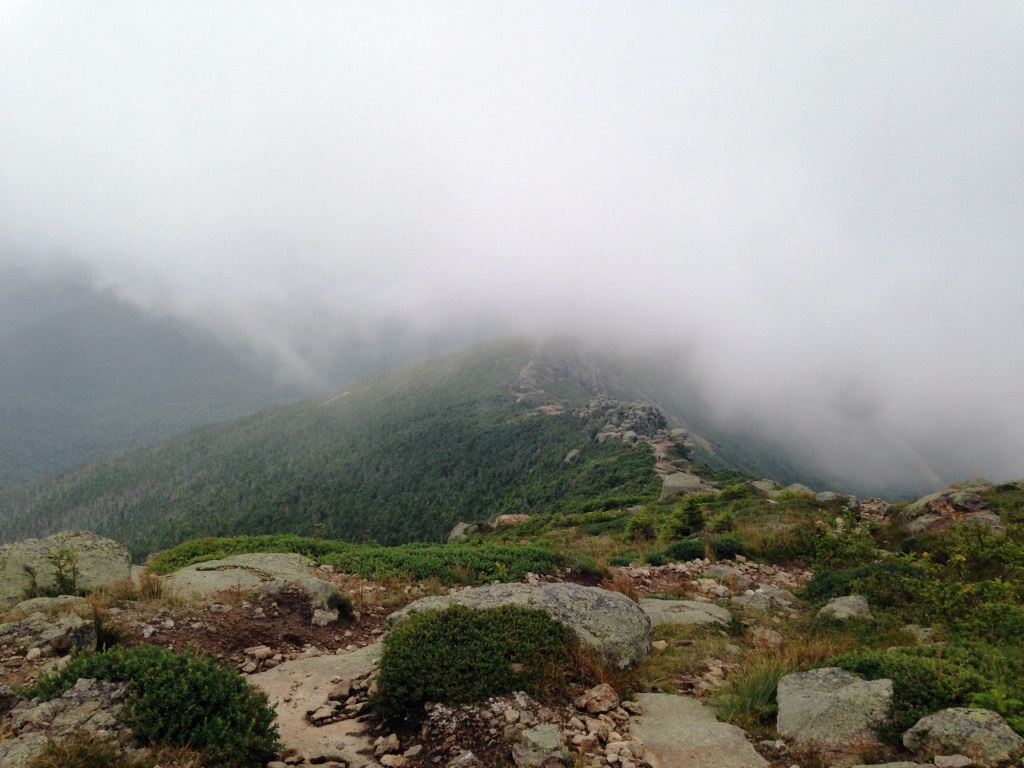 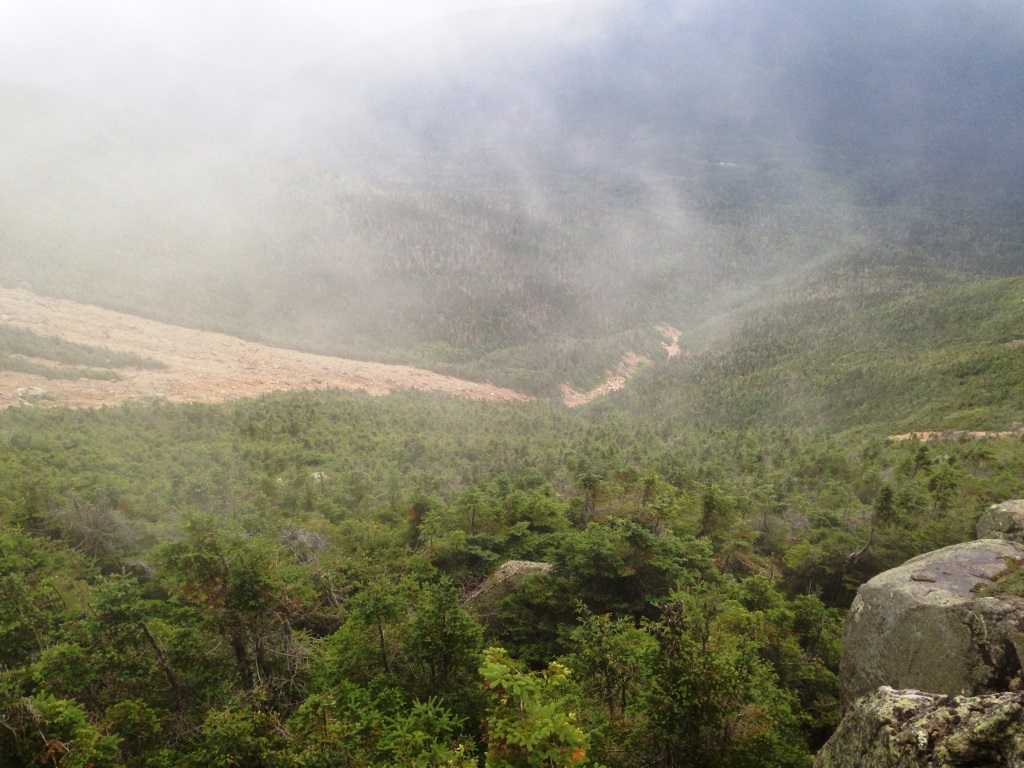 We continued to Mt. Lincoln (5,080 feet) and Lafayette (5,260 feet) under swirling fog (left), which has its own charm. Going past Mt. Lincoln is the Lincoln slide (right), which descends into the Pemi wilderness and I have to check it out some day. It was used for the speed record of doing all 48 4,000 footers of the Whites in less than 3 days as a short way to get to Owl's Head (see picture of Lincoln slide seen from Owl's Head on a previous hike). 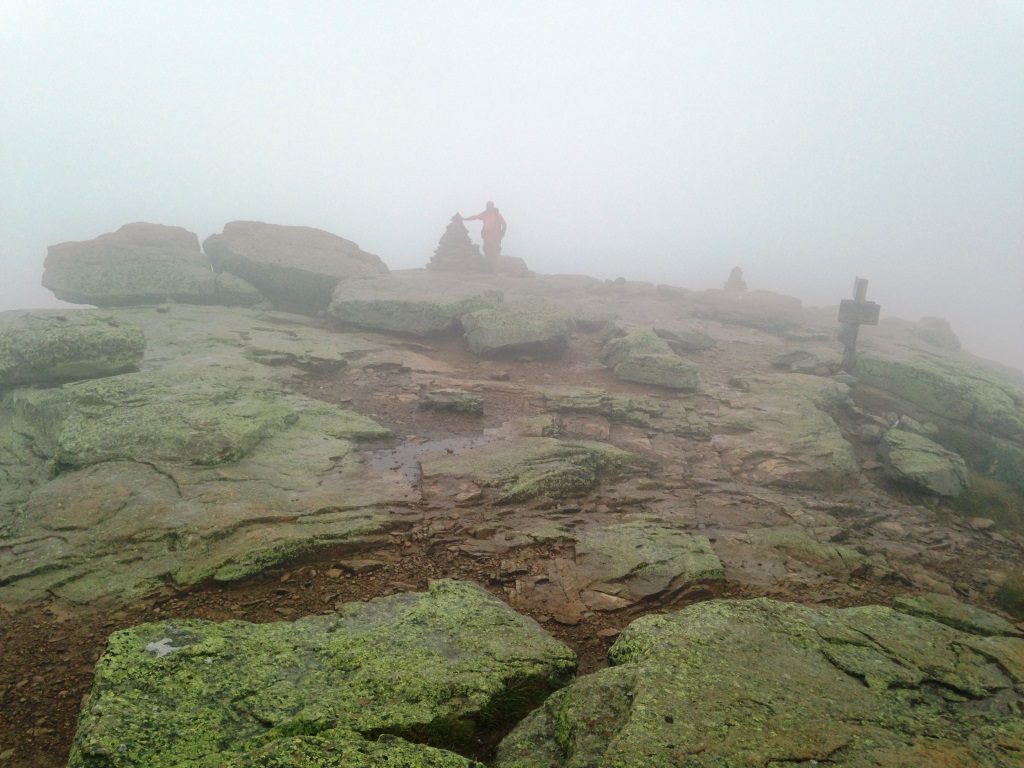 On the final climb of Lafayette I took this nice picture at left of the Franconia Ridge looking back, with Mt. Flume sticking out on the left like a little volcano. The top of Lafayette (right) was in fog and we had it for ourselves, which is remarkable considering the popularity of Lafayette but the fog of course may have had something to do with it. 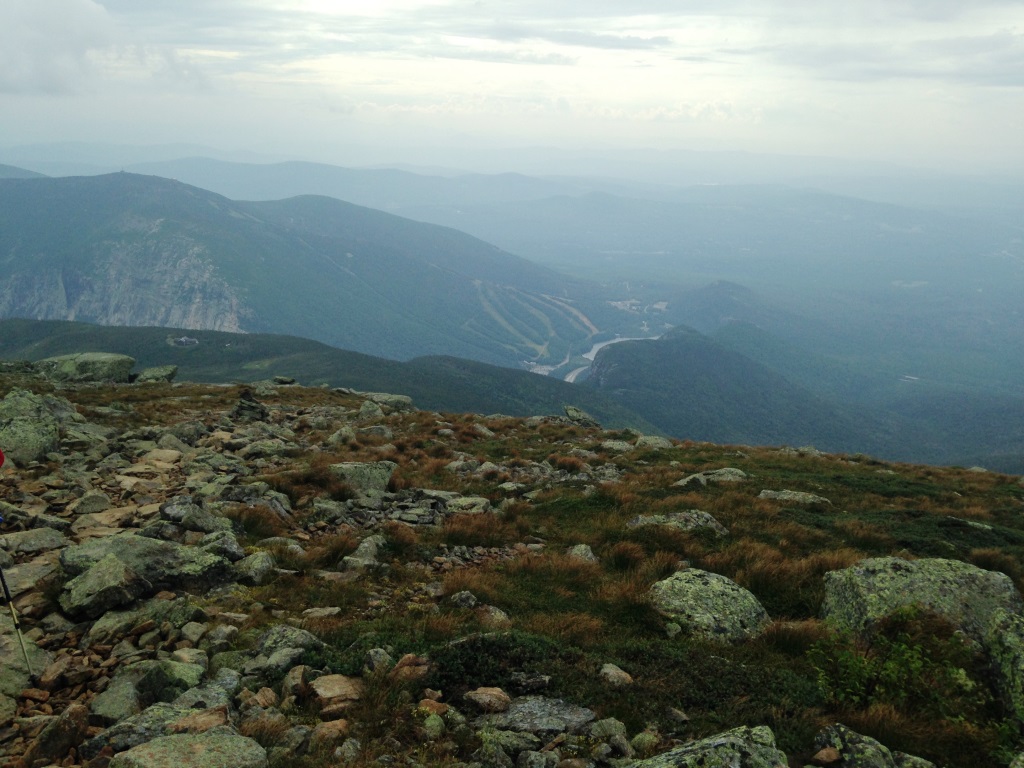 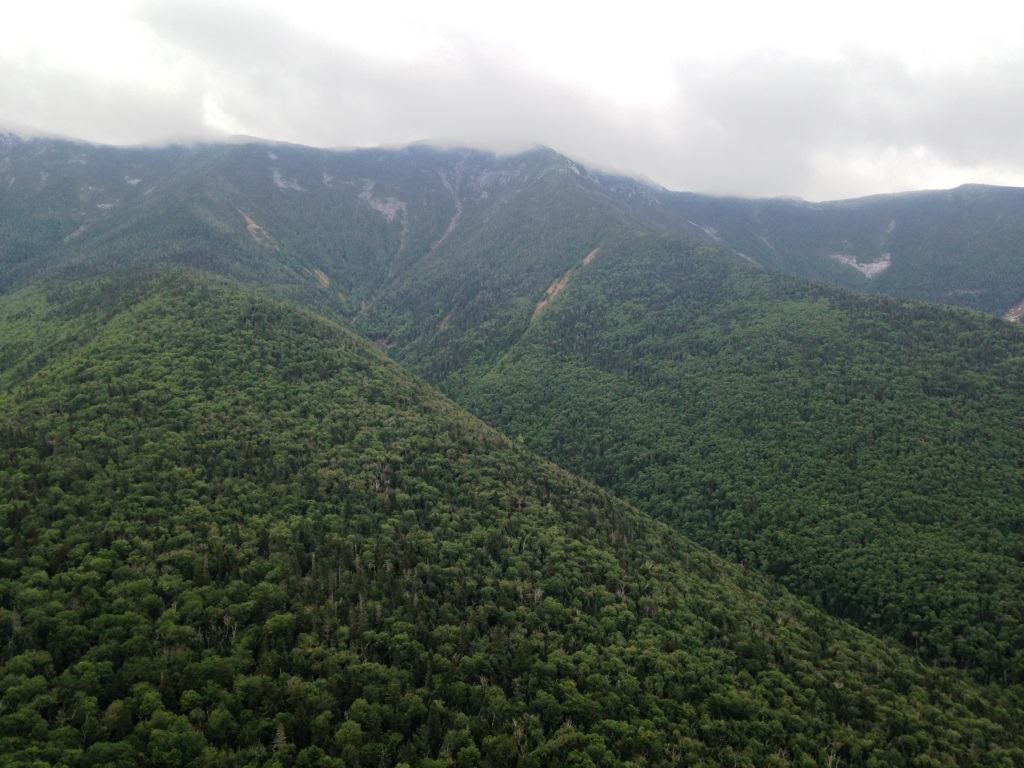 We descended from there to Greenleaf Hut, getting out of the fog as soon as we got off the top (left looking toward Cannon with Greenleaf Hut at the left edge). Greenleaf is one of the smaller AMC huts and it was bustling - lots of people preferring to stay inside to play board games and cards rather than be out in the fog. From there we descended Old Bridle Path, which has a great section with views looking up to the slide-scarred ridge (right), and back to the trailhead.