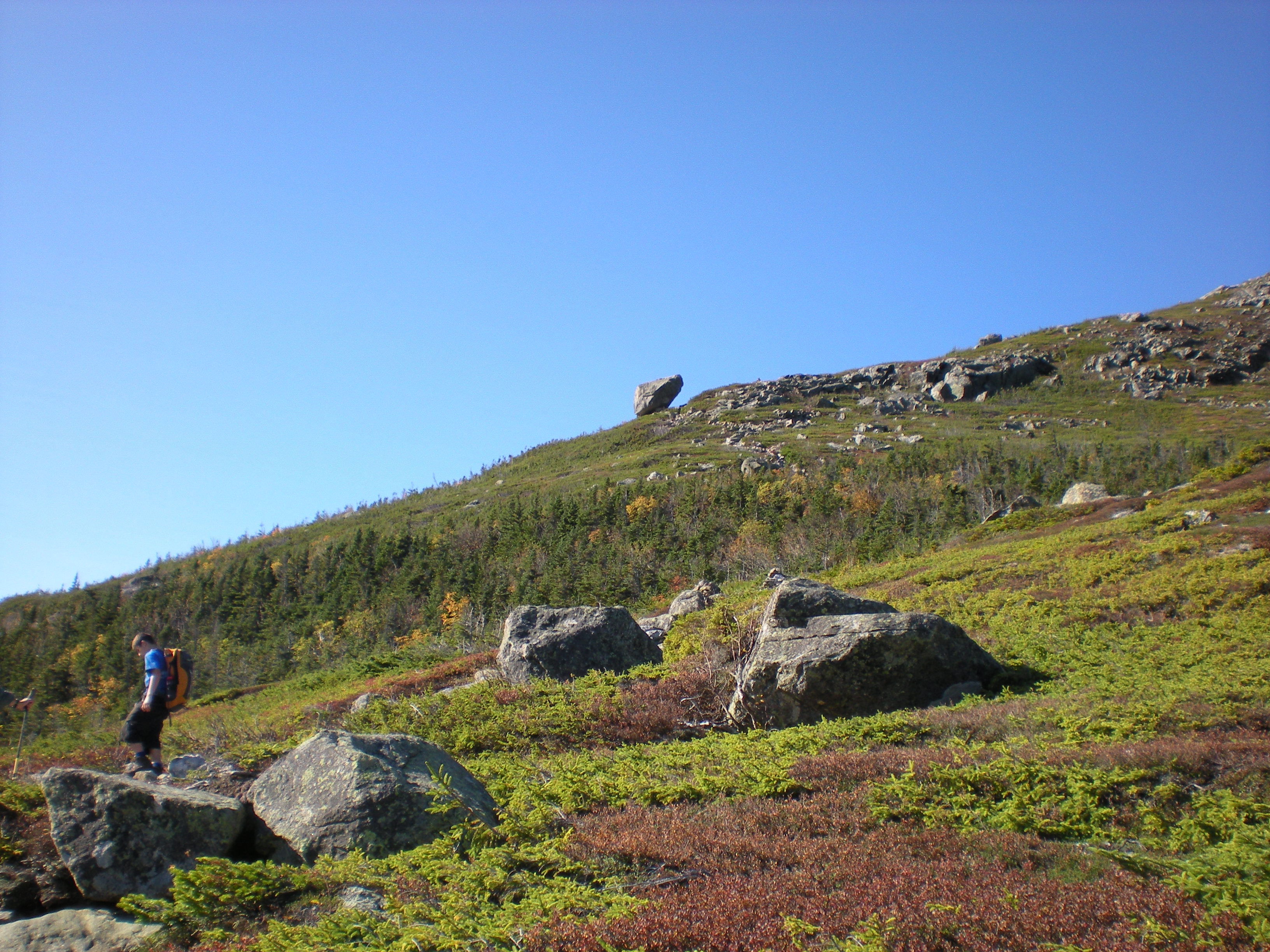 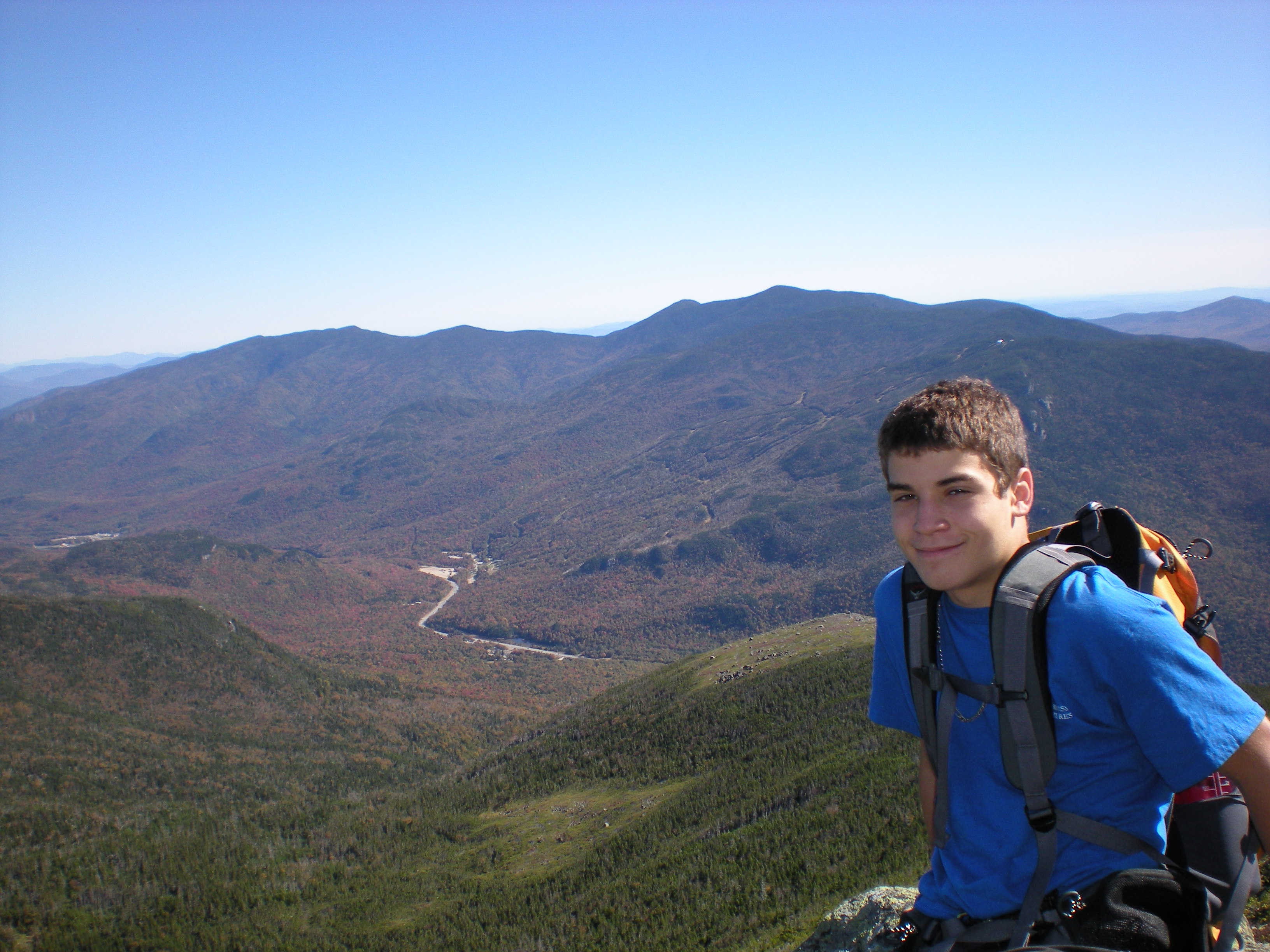 I had wanted to do Mt. Isolation for a long time. It teases you on the map, being far from anywhere, With a great clear day in the forecast three of us (Peter Wyatt, Richard Alex, and me) decided to do it by the Glen Boulder Trail, which takes you up from Pinkham Notch to 5,200 ft. on the shoulder of Boott Spur before dropping down on the other side to the Montalban Ridge by the Davis Path. Mt. Isolation (4,003 ft.) is little more than a speck on the Montalban Ridge. Hiking down to a peak - that's an interesting concept and a way to make an alpine zone experience out of a puny 4,000 footer. A really nice feature of Glen Boulder Trail is that you break out in the open soon after leaving Pinkham Notch. Immediately after breaking out we found ourselves staring at Glen Boulder, a large glacial erratic in seemingly precarious balance (left). We continued climbing with great views of Pinkham Notch and the Gulf of Slides (right). Color was starting, with the valley floor bathed in patches of red maples among the green and the higher elevations covered with yellow birches. Blow up the picture to the right to get a feel for the color. 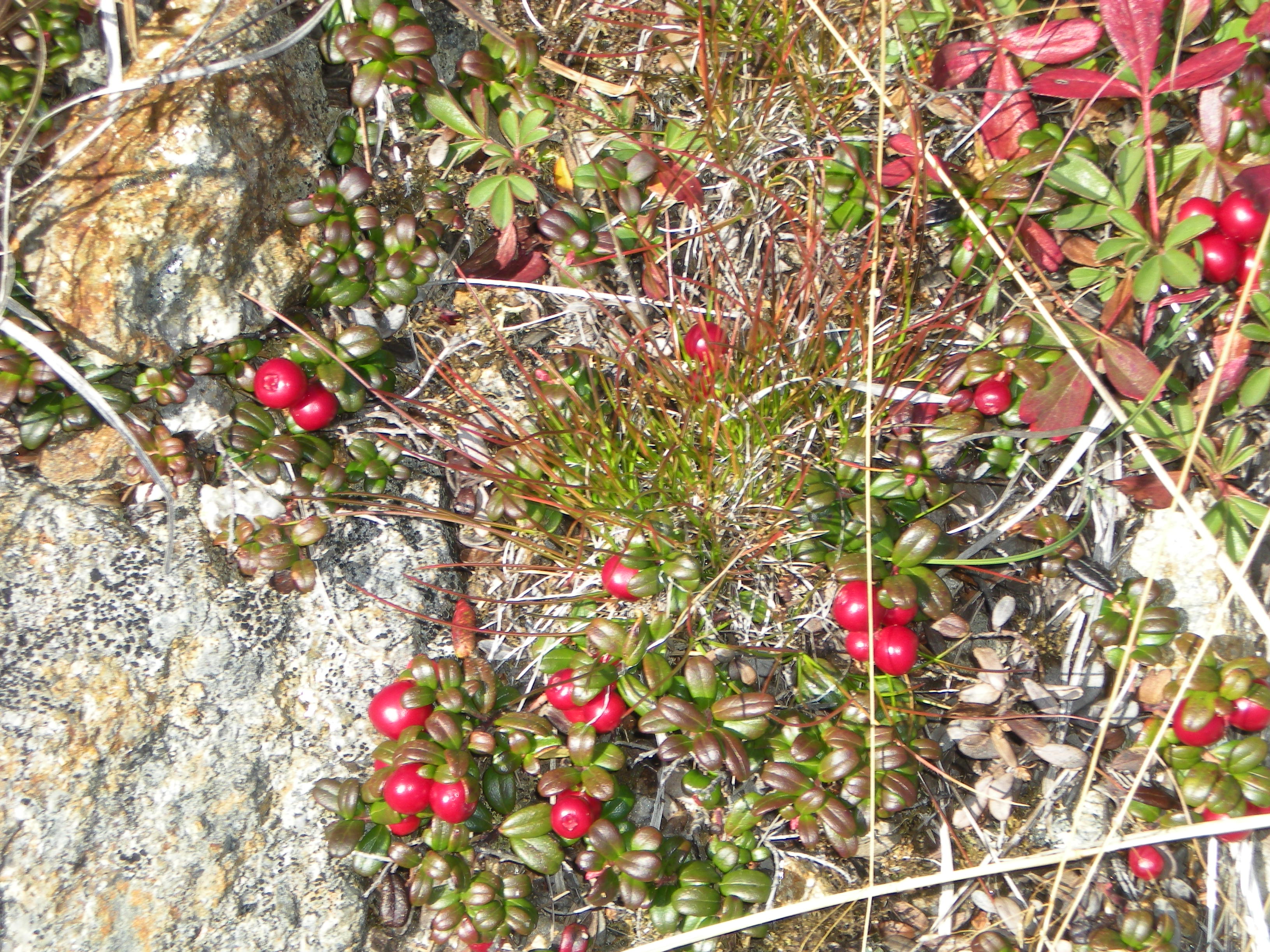 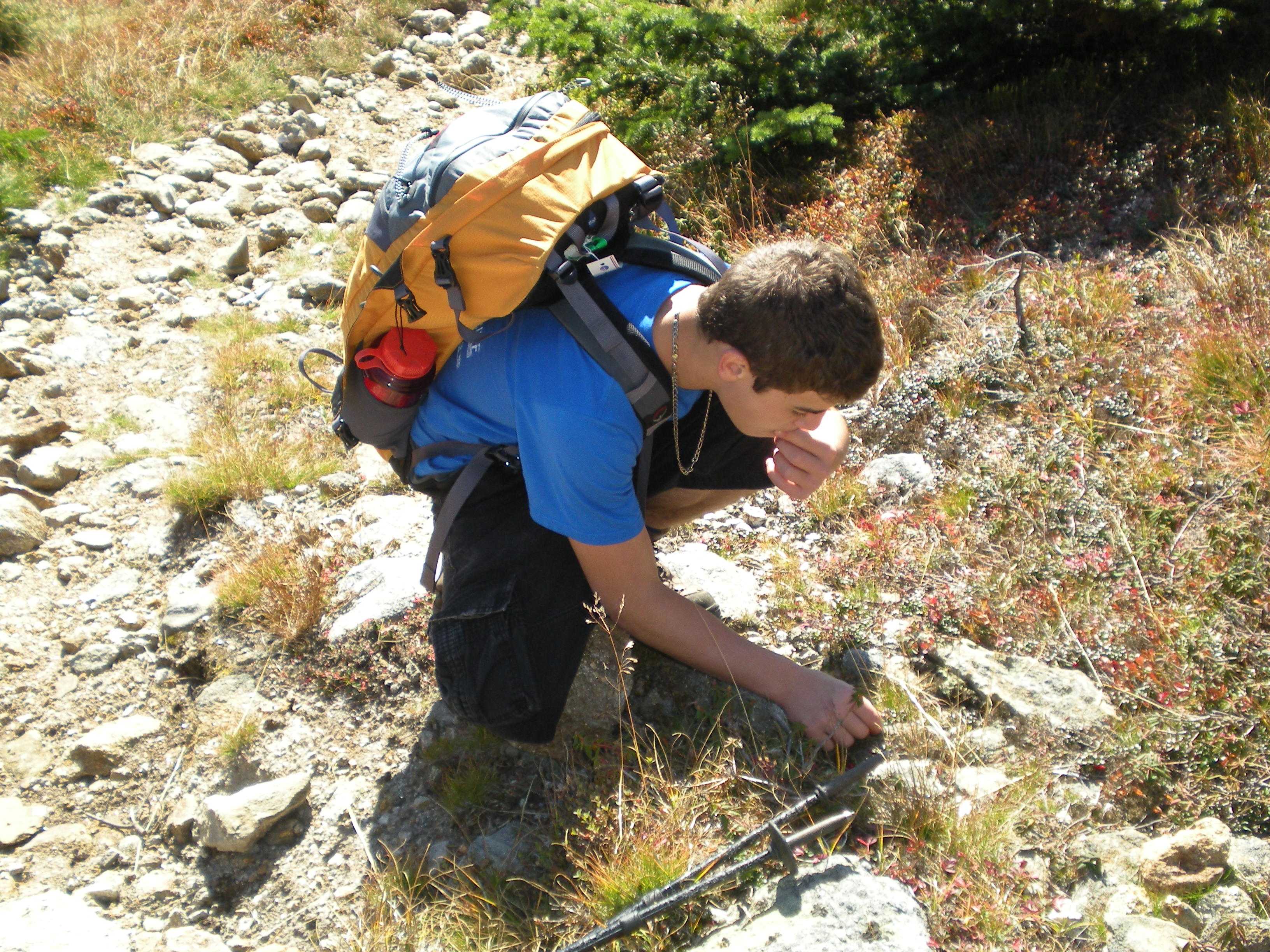 As we approached 5,000 ft blueberry and cranberry bushes carpeted the mountainside. There were still some blueberries left even after frost had evidently taken its toll but what was remarkable were the beautiful cranberry bushes (left). They were ripe and (relatively) sweet, and dense enough that we could scoop a handful by combing the bushes with our fingers (right). 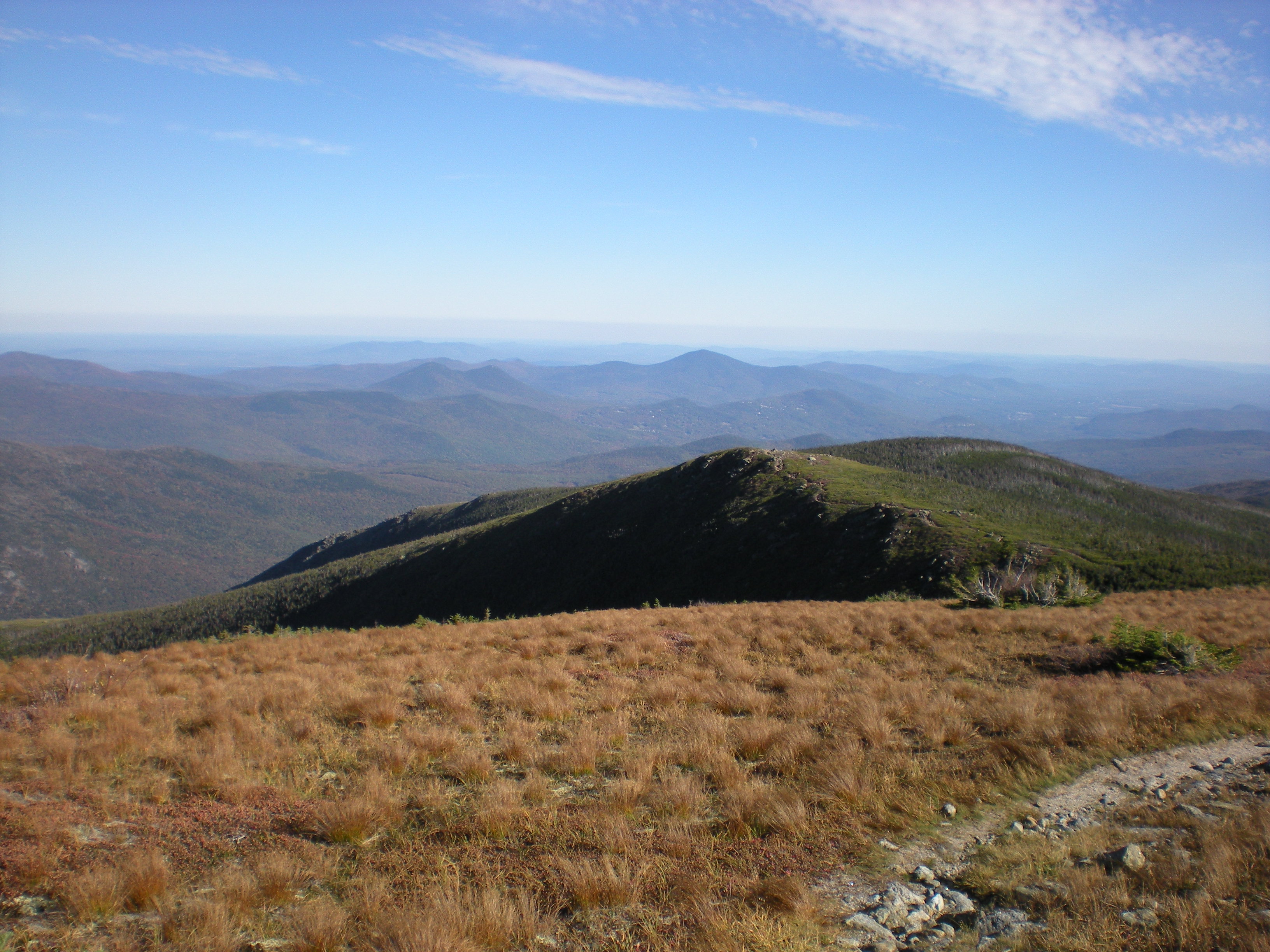 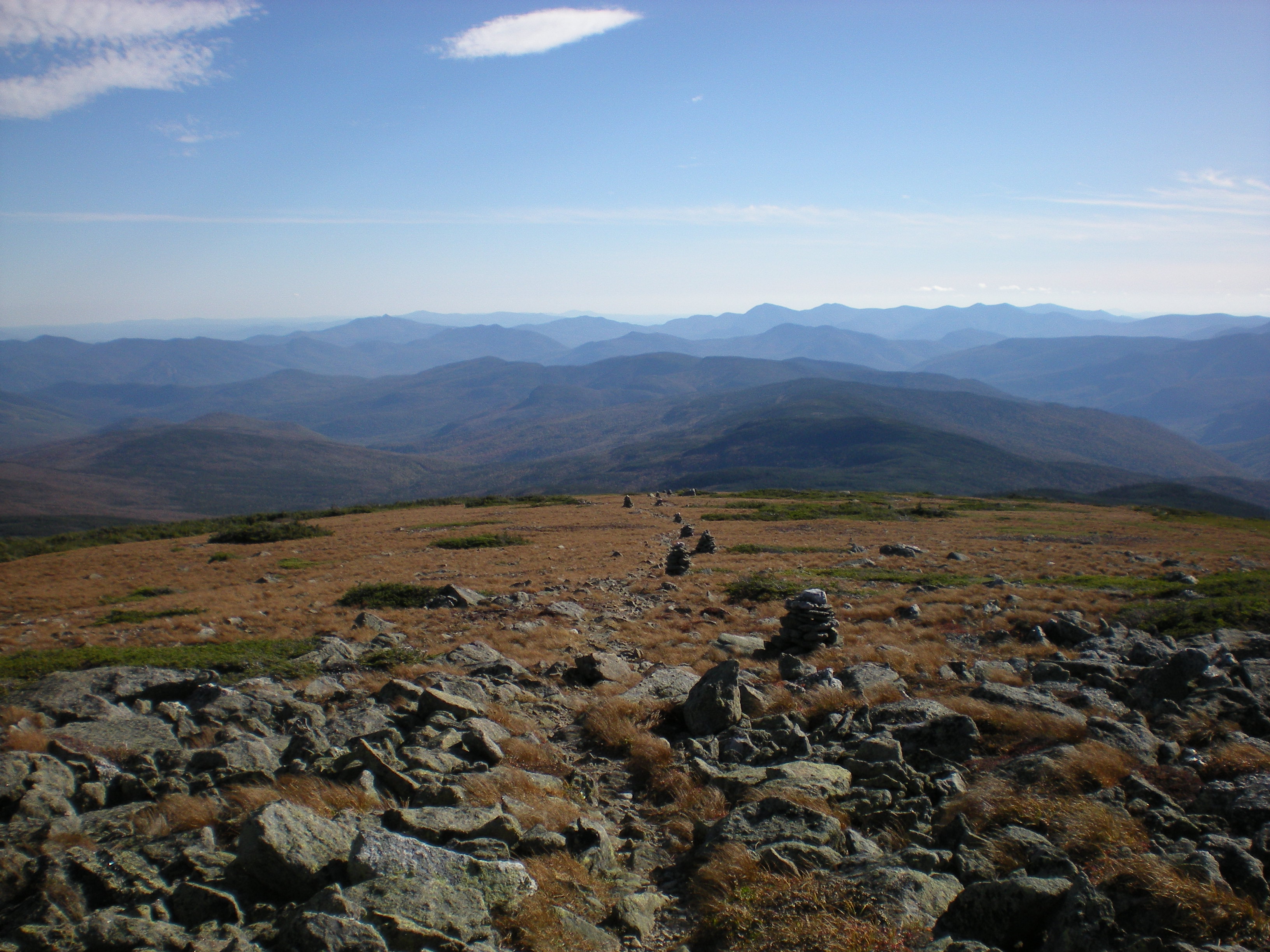 This area above treeline has extensive lawns (left). We've had a very wet summer in the White Mountains and the grasses above treeline stayed unusually green all summer long (see in particular my Tuckerman Ravine and Alpine Garden hike), but September was dry and the lawns took on their usual end-of-season rusty brown colors.The intersection of Glen Boulder Trail and Davis Path gave us our first view of the Montalban Ridge (right) looking down the Davis Path, and I have to say that this is one of the most beautiful views of the Whites that I've ever contemplated. The cairns mark the Davis Path heading down to Montalban Ridge. To the left of the Ridge is Rocky Branch valley, and to the right is Dry River valley. Mt. Isolation is the first tiny ledgy speck that you see going down on the ridge (blow up the picture to see it better). The more extensive ledges further down the Ridge are Mt. Davis. 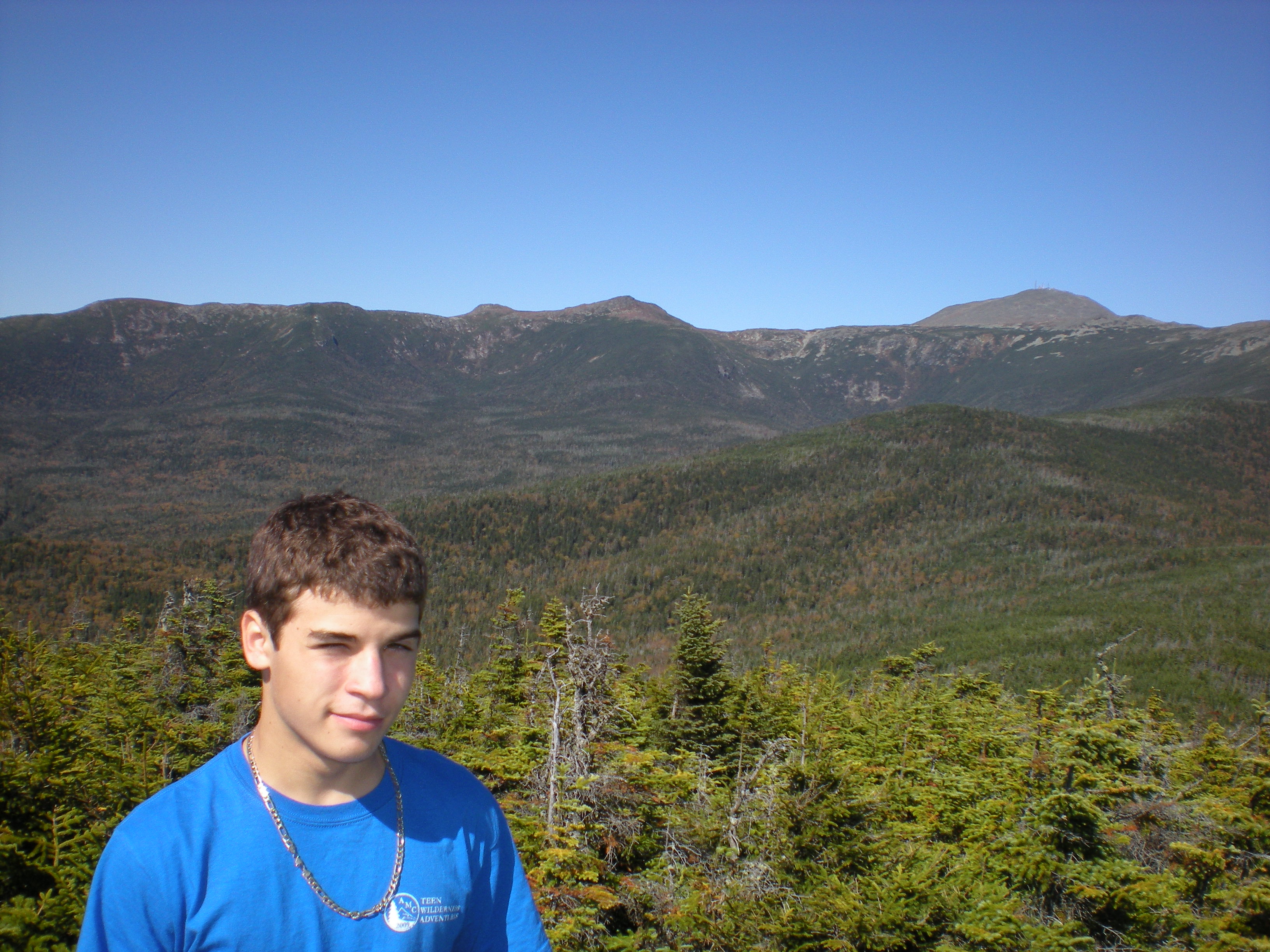 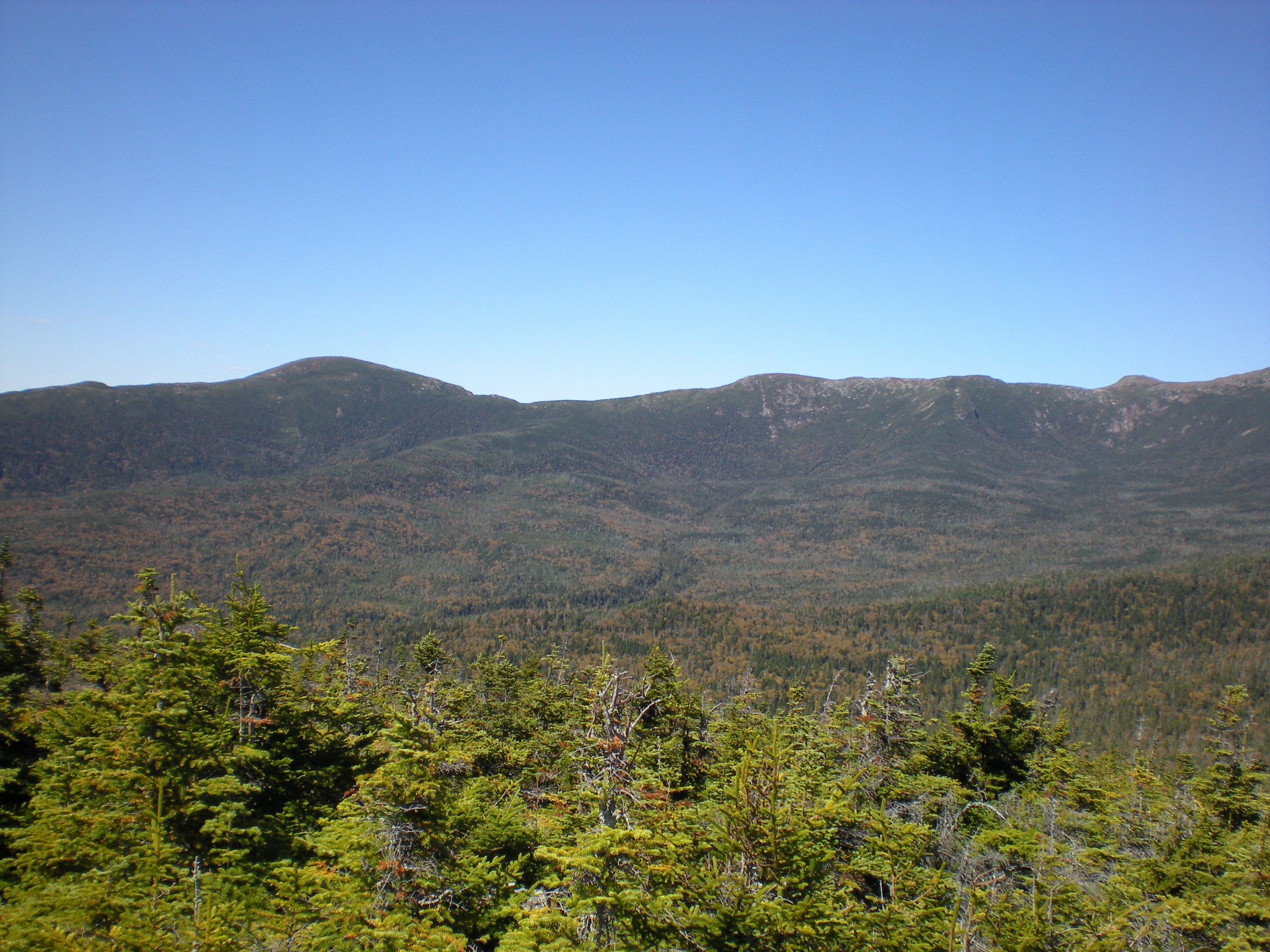 We hiked down 1000' from the intersection to reach Mt. Isolation. We met an enthusiastic Adopt-a-Trail volunteer working the Davis Path stretch from Glen Boulder Trail to Mt. Isolation, and he told us the challenges of maintaining this very remote section of the trail. Mt. Isolation was a short spur from the Davis Path, with flat ledges and wide open views in almost all directions. To the north were the first two bumps of the Montalban Ridge (which we had just gone over), with Oakes Gulf and Mt. Washington in the background (left). To the west was the Dry River Valley and an unusual view of the southern Presidentials (right). 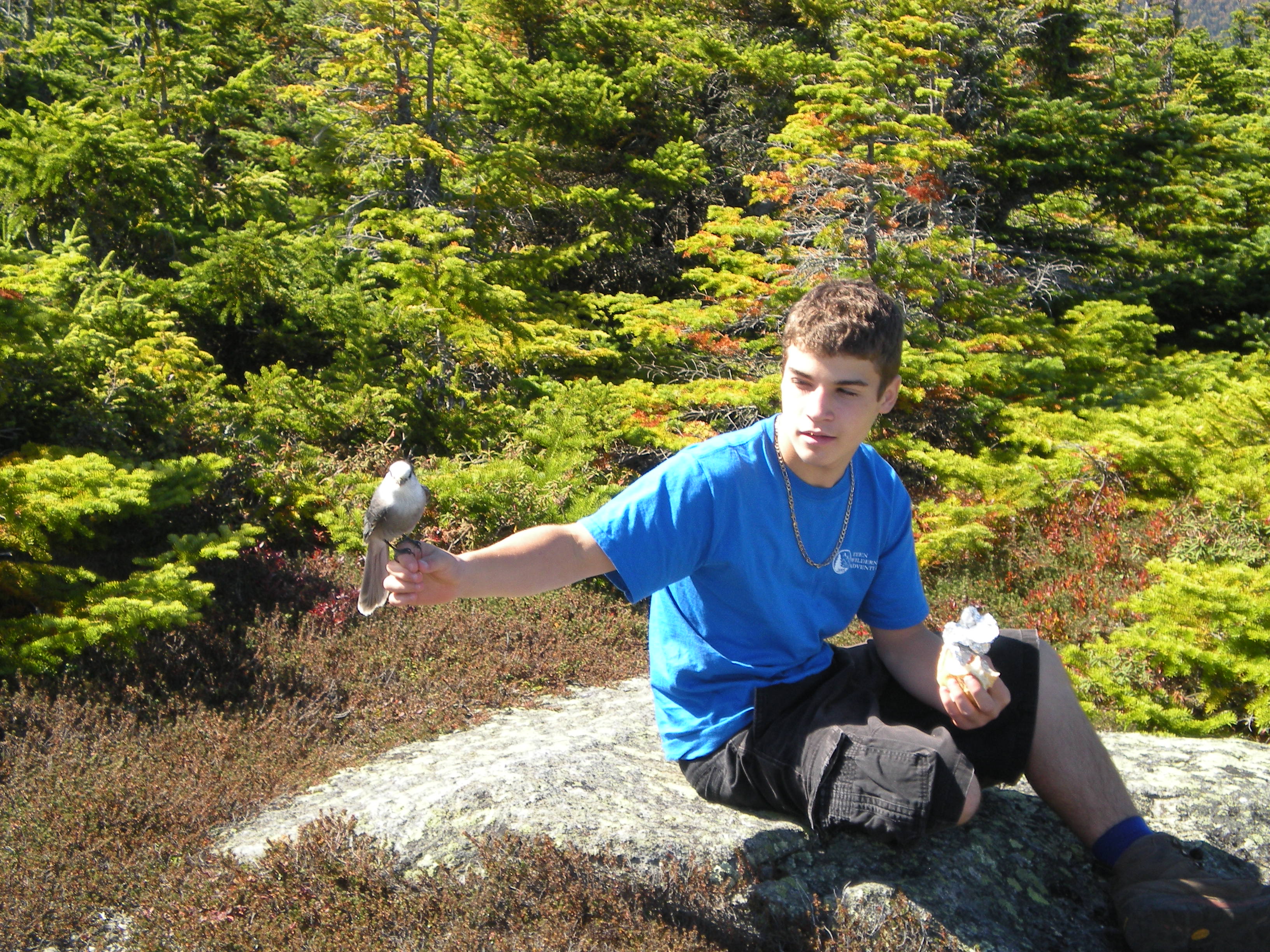 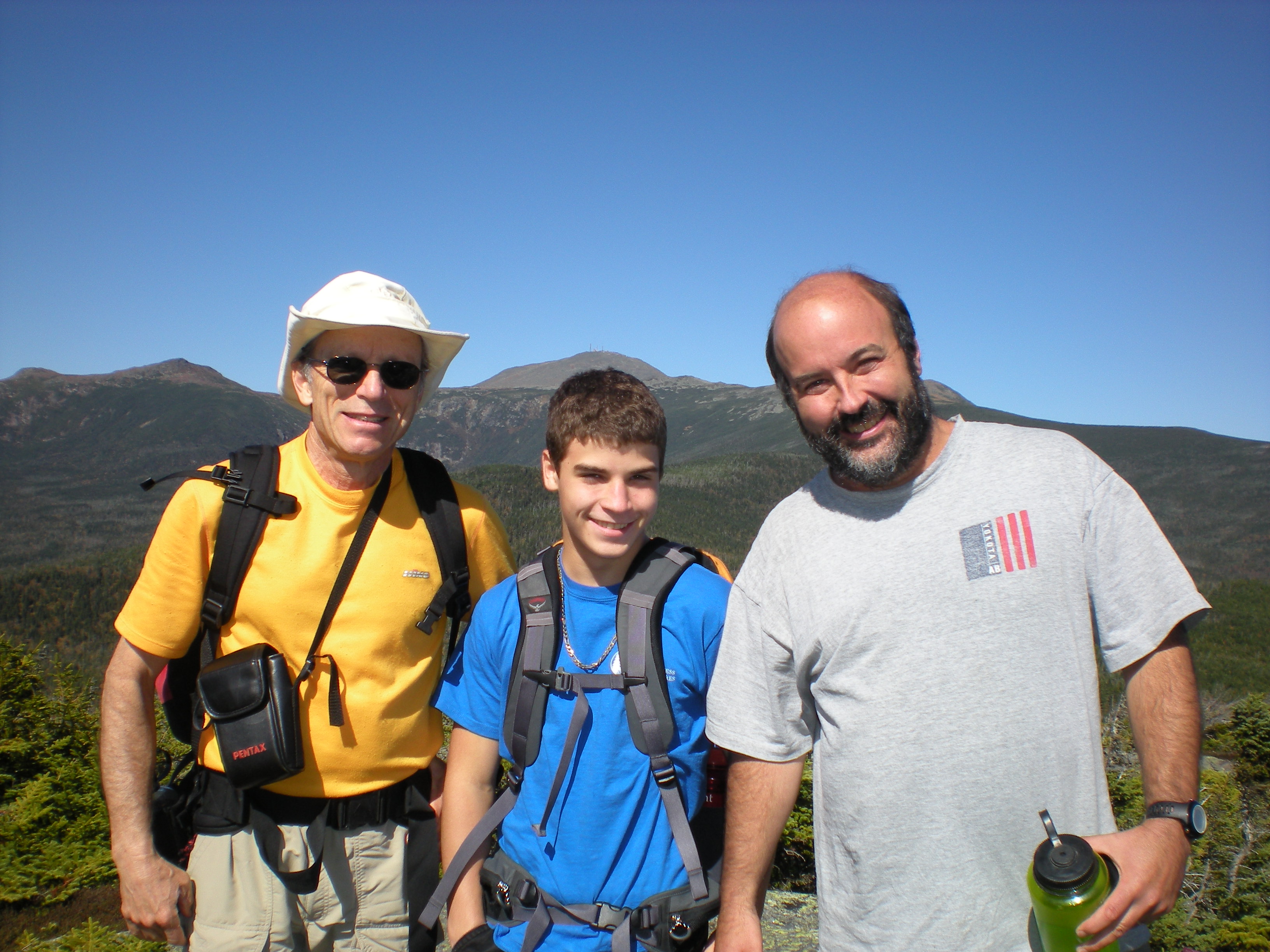 We had lunch and hung out for a while on Mt. Isolation. There was a resident group of grey jays eager to share our lunch (left) and they were remarkably tame. They didn't just hop on your hand to grab a morsel and fly away, but remained on your hand for a while so you could admire how cute they were. I guess they don't see that many hikers at Mt. Isolation so they have to try harder. There still were two other groups of hikers to share the summit with us, so we got our picture taken (right) before heading for the climb up from the summit (!) and back to the Glen Boulder Trail. 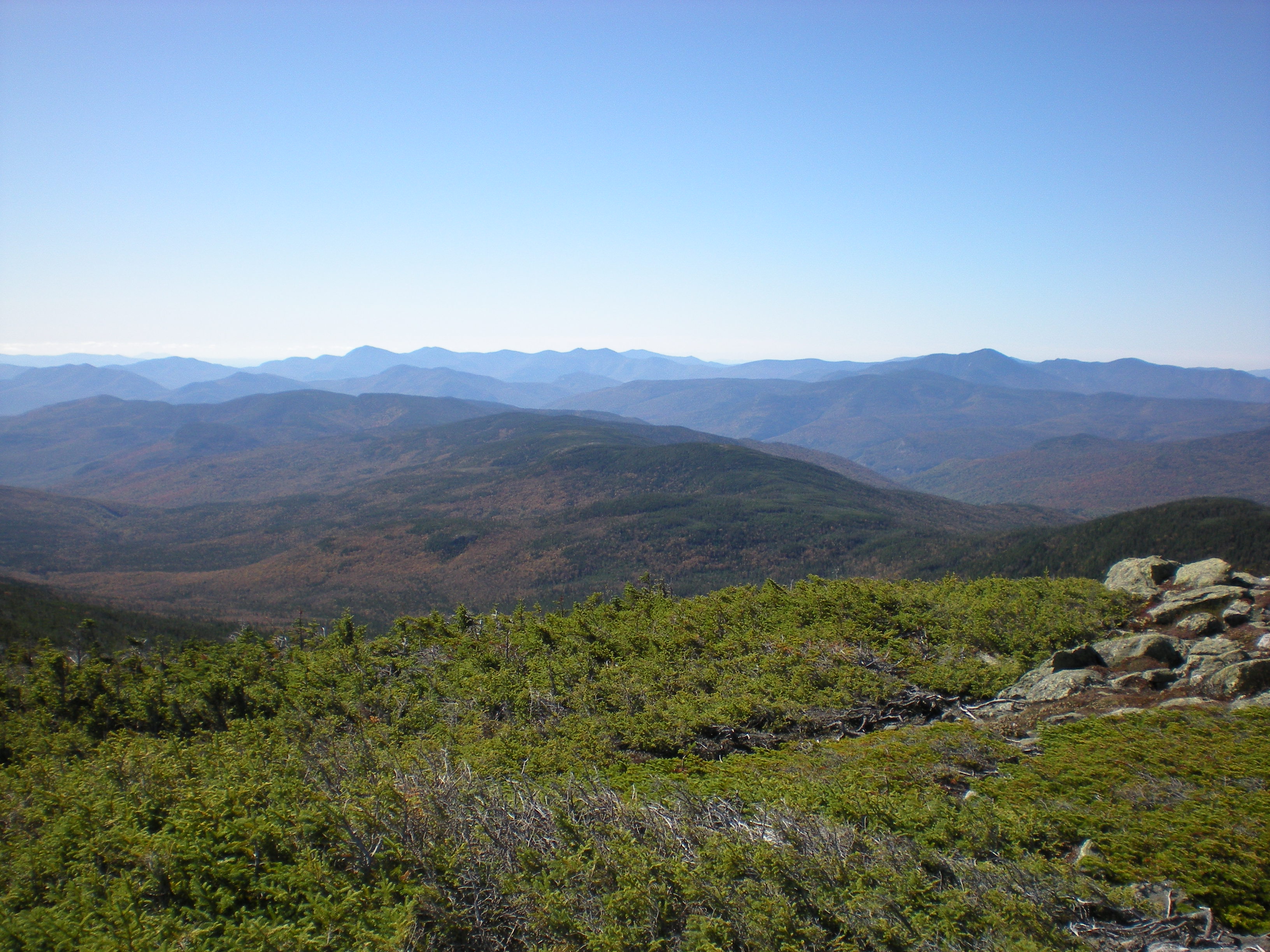 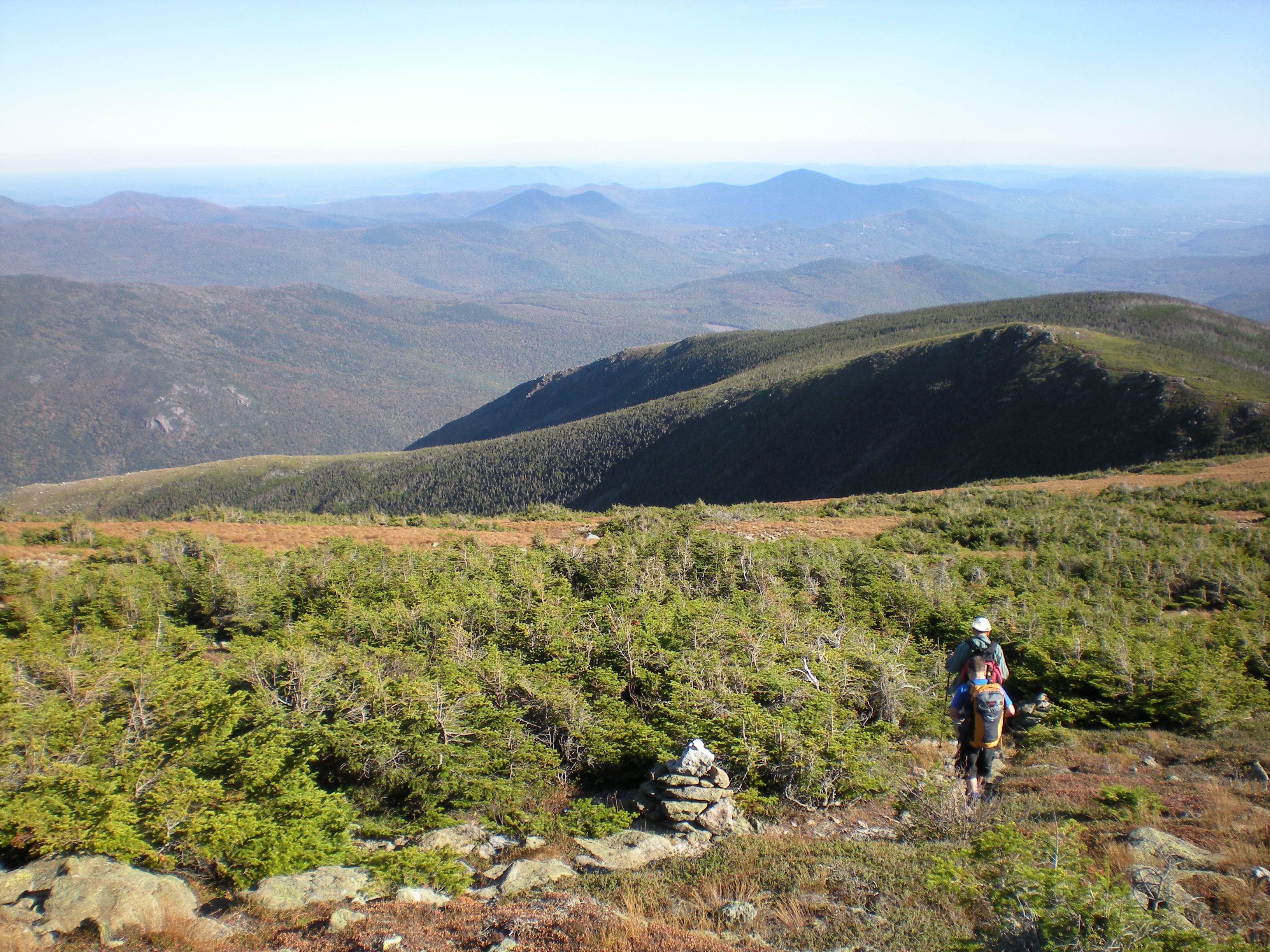 Going back above treeline in the afternoon light gave a very different perspective from the morning. The view of the Rocky Branch Valley was beautiful (left) and the hike down to Glen Boulder spectacular (center), closing on a beautiful view of the Mt. Washington Valley in the evening light (right) before dropping below treeline. A 10-hour hike on a beautiful day! This was Alex's 25th 4,000 footer - 23 to go!