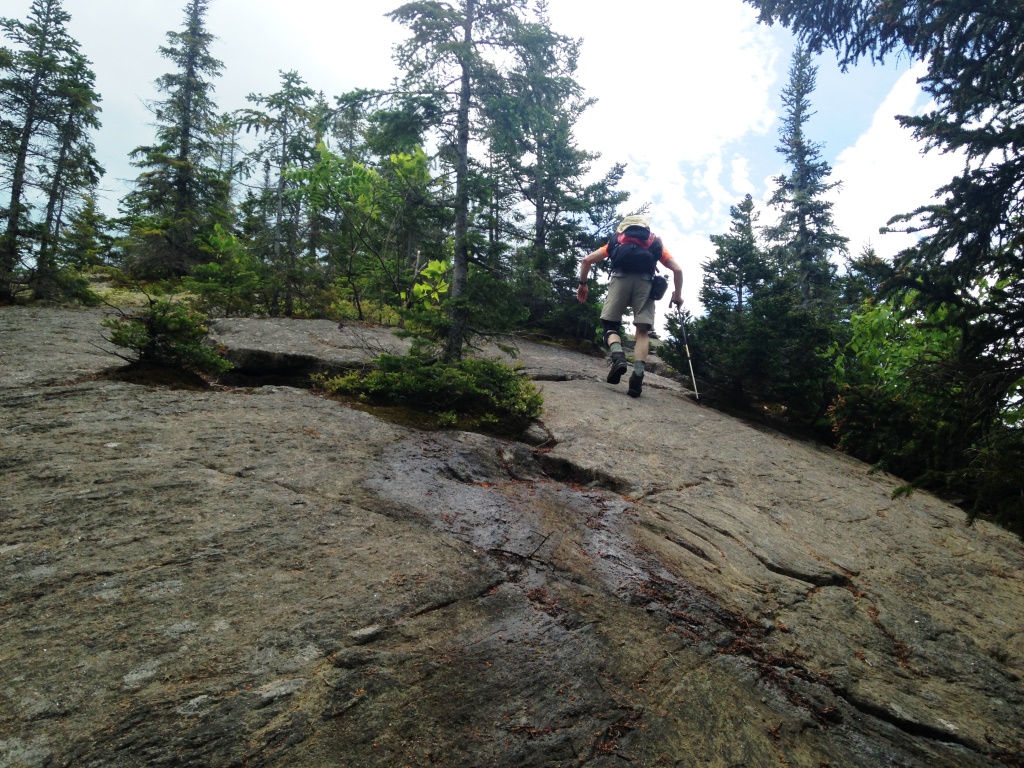 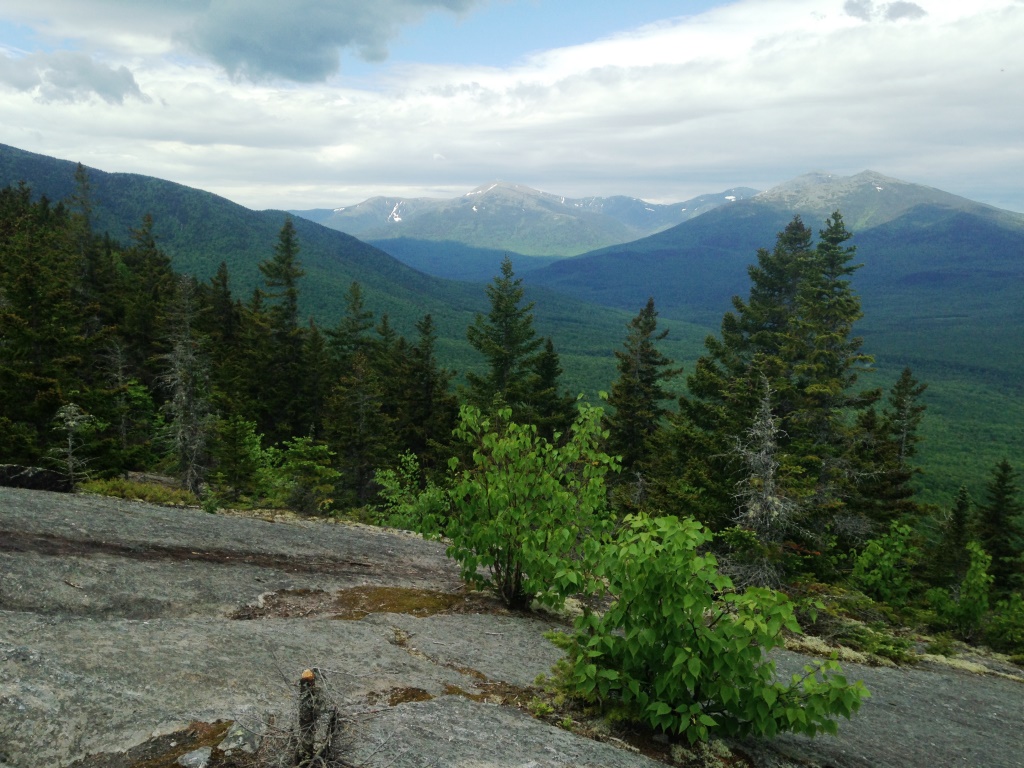 There was ice on the car this morning in Bretton Woods - first frost of the year. Peter Wyatt and I set out to climb Huntington Ravine, which we had wanted to do for a long time. It was a beautiful Saturday in Pinkham Notch with lots of people on the Tuckerman Ravine Trail, but as soon as we branched off to the Huntington Ravine Trail the crowds were gone. We paid a visit to Harvard cabin (left), which is open only in winter for ice climbers. At a little above 4,000 feet we emerged into the open at Huntington Ravine (right). Straight above us was the big jumble of rocks known as the Fan, and above that the ravine was in fog. It had rained the day before and we were concerned about slippery rocks for the climb, but the rocks looked reasonably dry so we proceeded. 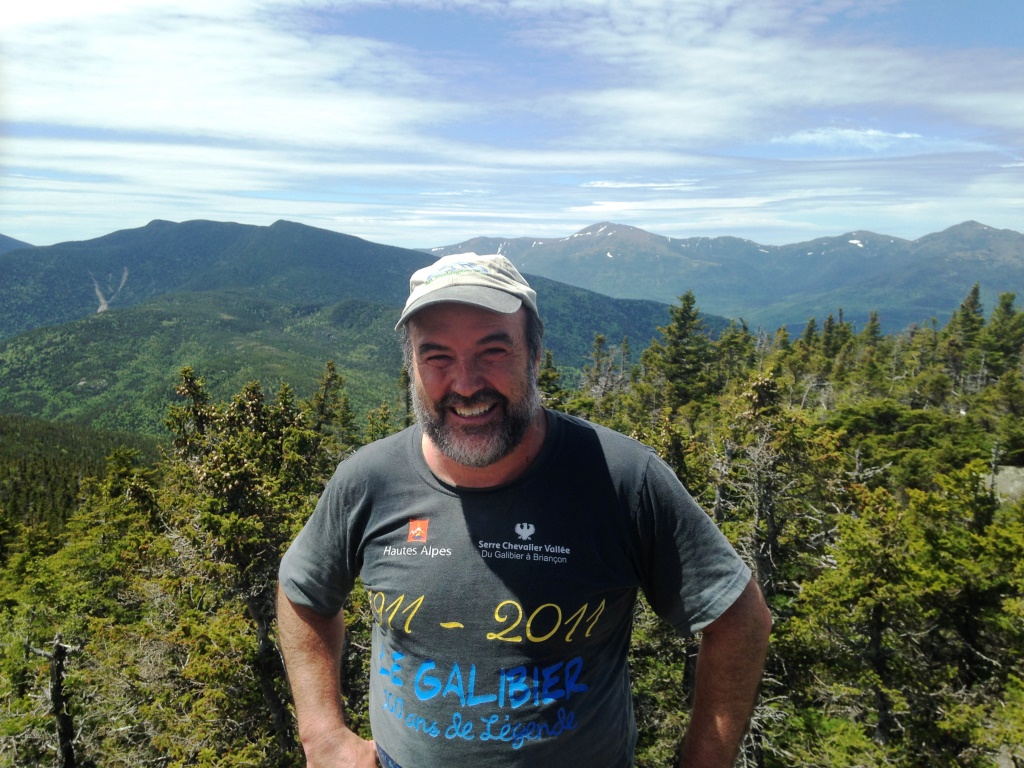 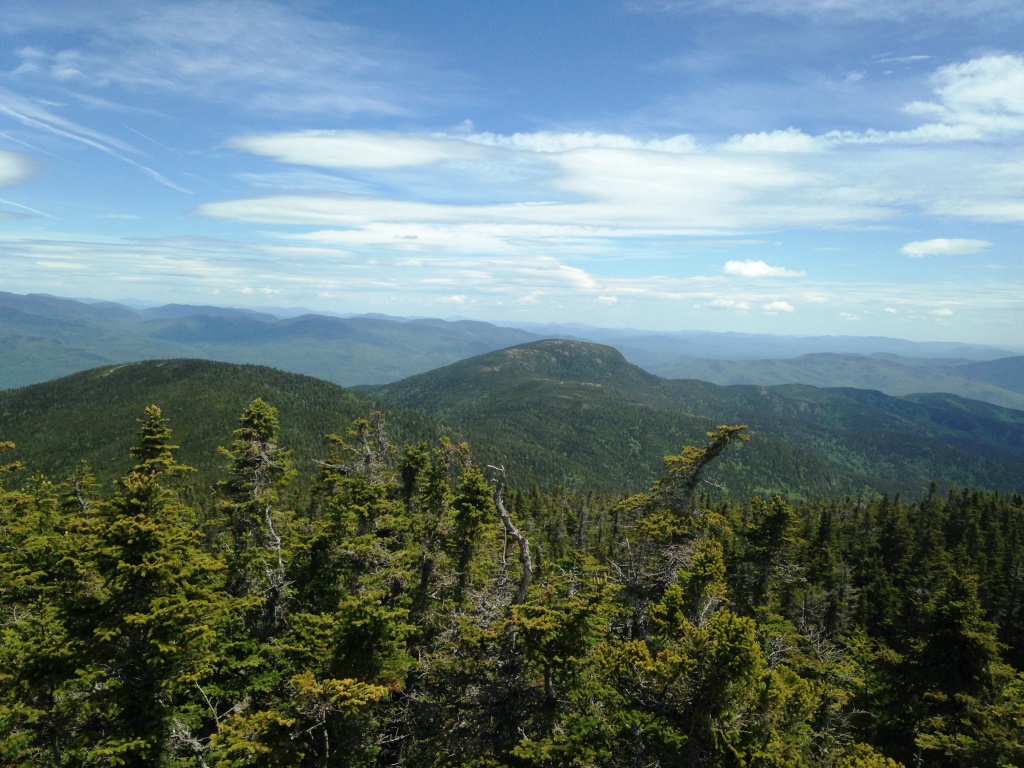 The climb through the Fan takes you above and below big boulders and is quite challenging - it reminded me of King's Ravine. I was a bit worried that the guidebook made no mention of these difficulties. They probably presume that anyone crazy enough to go up Huntington Ravine will just breeze through the Fan. At the top of the Fan we had a beautiful view of the bottom of the Ravine (left). The birches were in peak color. Wildcat Ski Resort can be seen across the valley. Now the fun was about to begin with the celebrated climb of the ravine - the most difficult trail in the White Mountains. There was a group ahead of us and we watched them climb the first ledge above the Fan (right) 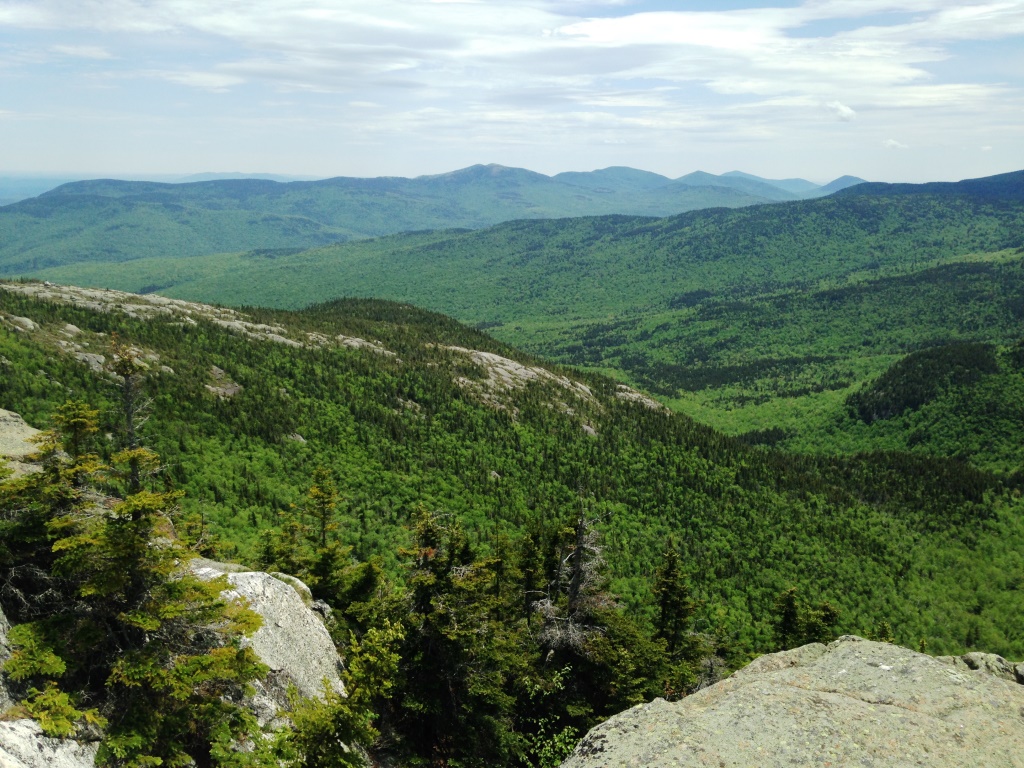 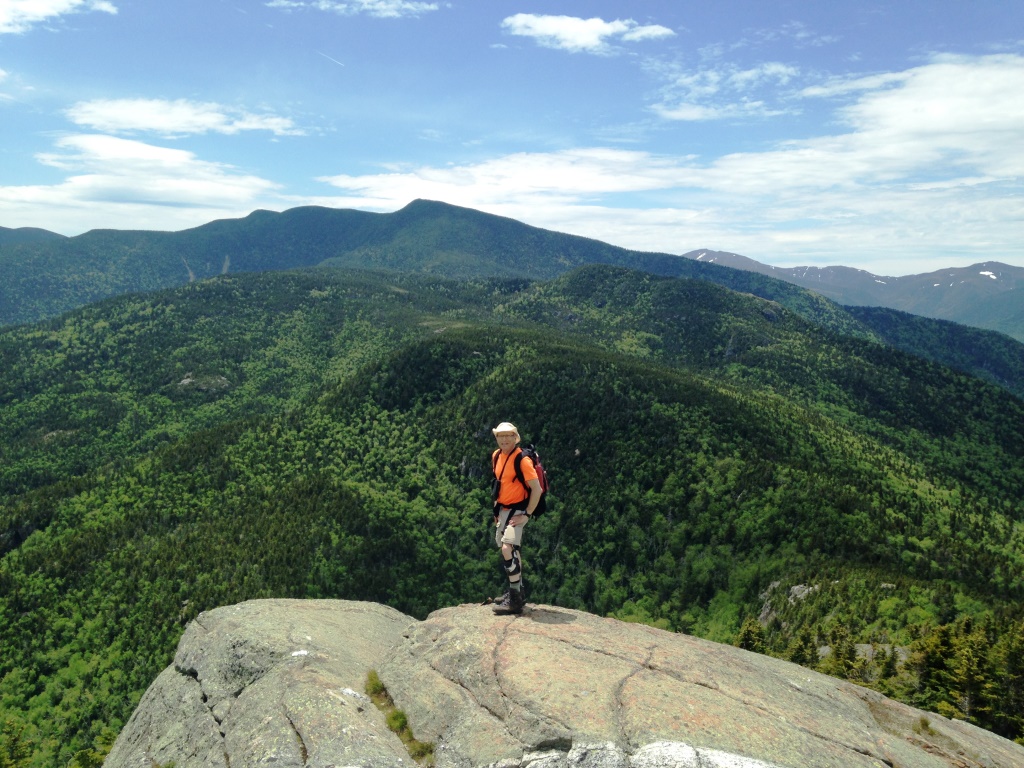 That first ledge was tricky in terms of finding handholds and footholds, and it was wet in places, but it wasn't scary because the drop wasn't huge - you'd survive a fall with just a few scratches. I had read that this was the most difficult part of the climb and after that my confidence was way up (left). Little did I know. The way to the top involved considerably more steep scrambling, searching for handholds and footholds, but now with tremendous exposure - falling was not an option. I just had to concentrate on finding the holds, no looking down. Still there were a few spots were I was uncomfortable. Fortunately I was led by Peter, who has mountain goat ancestry (right) and spotted me in difficult places. 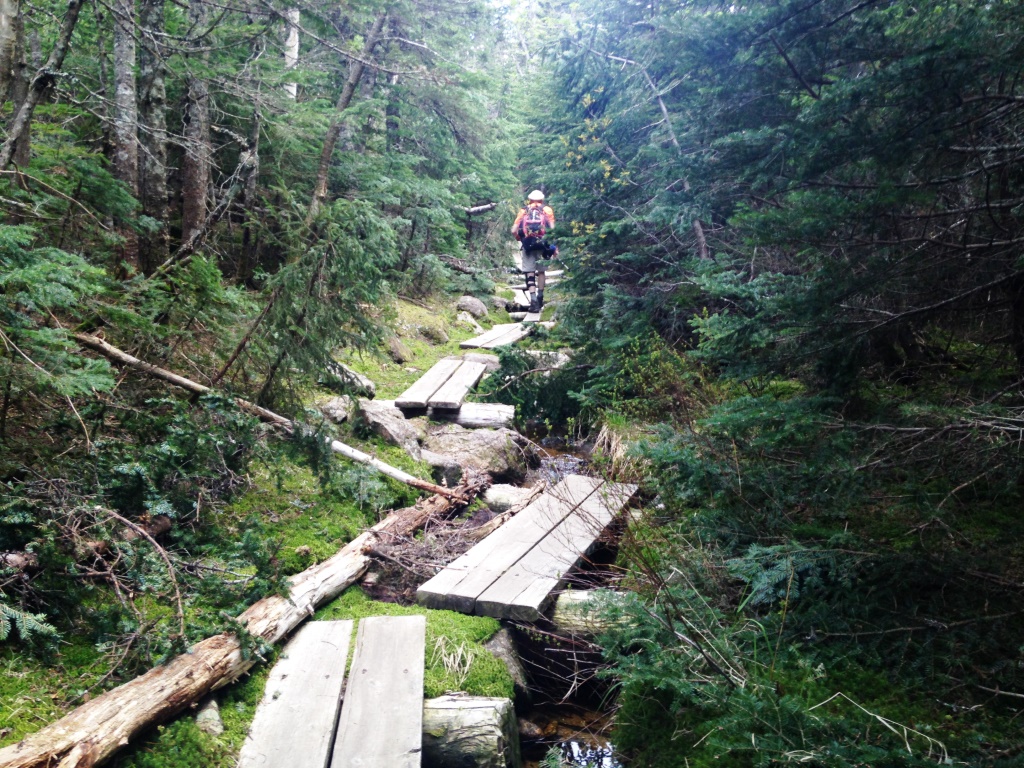 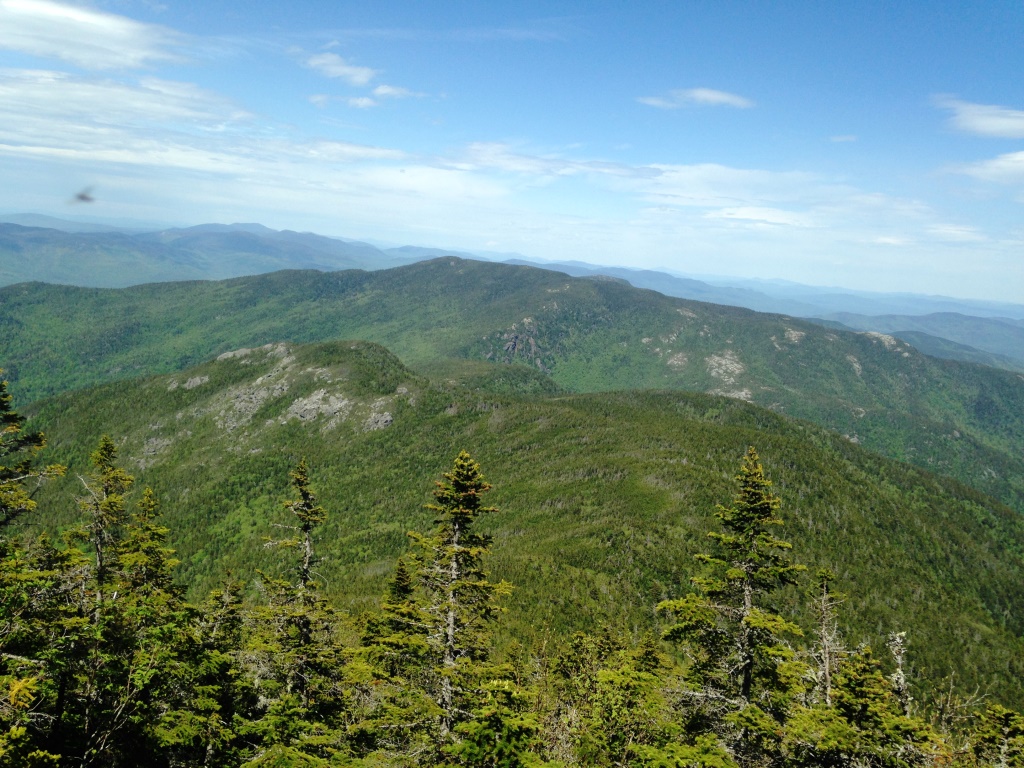 As we climbed the fog gradually rose and we had great views looking down into the Ravine (left). On the picture at right Peter gives a sense of the verticality of the place. On the other side of the ravine we saw groups of mountain climbers on the Pinnacle and it was sheer vertical rock - our task looked easy in comparison (but they were roped in!). We met two hikers who had parked their car at Mt. Washington Auto Road, gone down the ravine (which you're not supposed to do, it's too steep), then back up, and then were going to drive to the top and do the same routine down and up the Great Gulf Trail (another very steep one). They explained that by driving up the Auto Road they were just doing the 'fun' parts of the trails. Interesting to think of the Road as a hiker shuttle. Anyway, these guys obviously knew what they were doing. 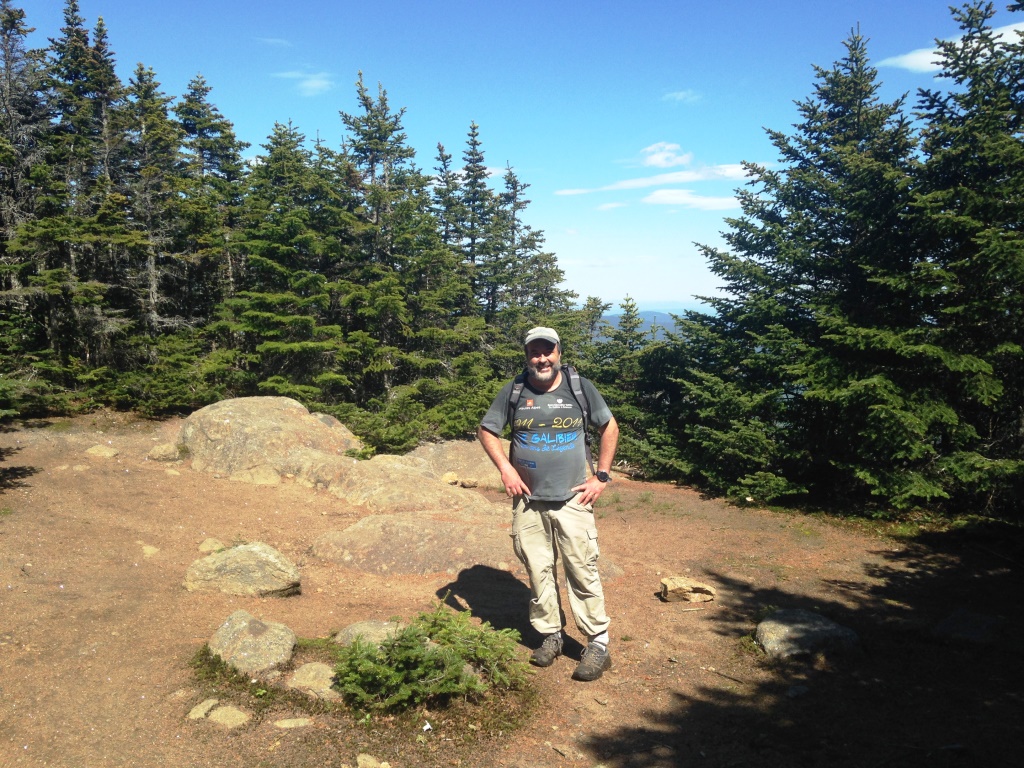 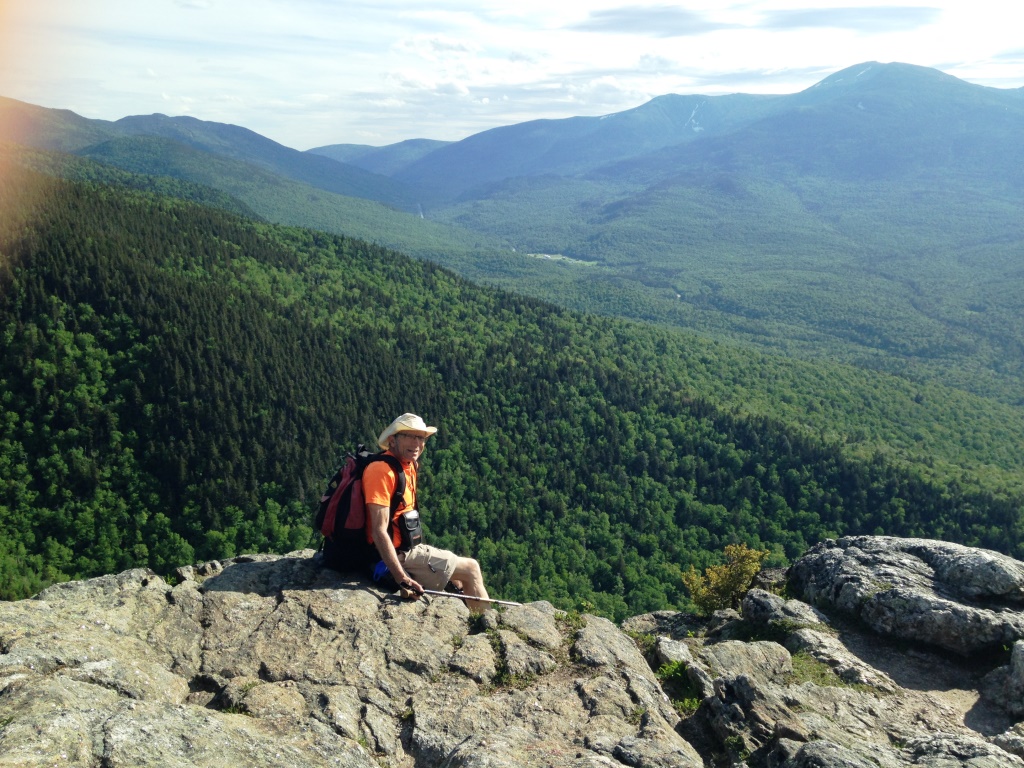 After a final steep scramble on exposed ledge we were on top of the headwall at the intersection with the Alpine Garden in the lingering fog. We had done it! (left). After a lunch stop we headed south on the Alpine Garden Trail, which is an absolute gorgeous flat trail above treeline with a view of the Mt. Washington summit to the right and the ravines to the left. I had done it the previous year with my son Oscar, again in and out of fog. When the fog cleared we had beautiful views (right). 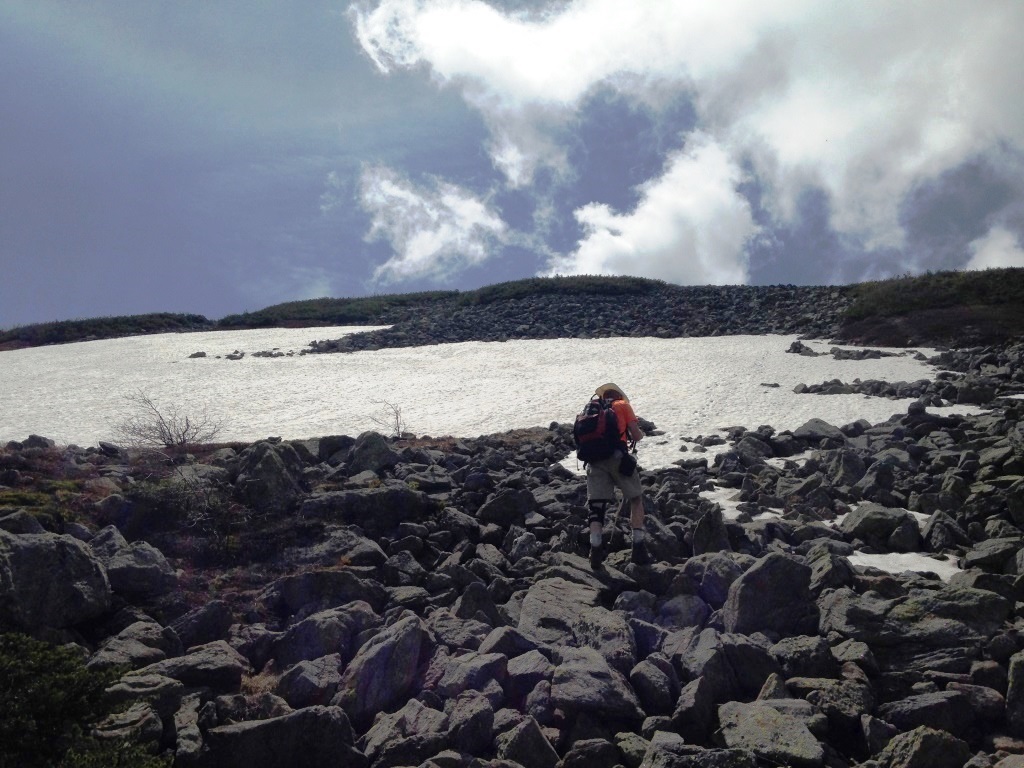 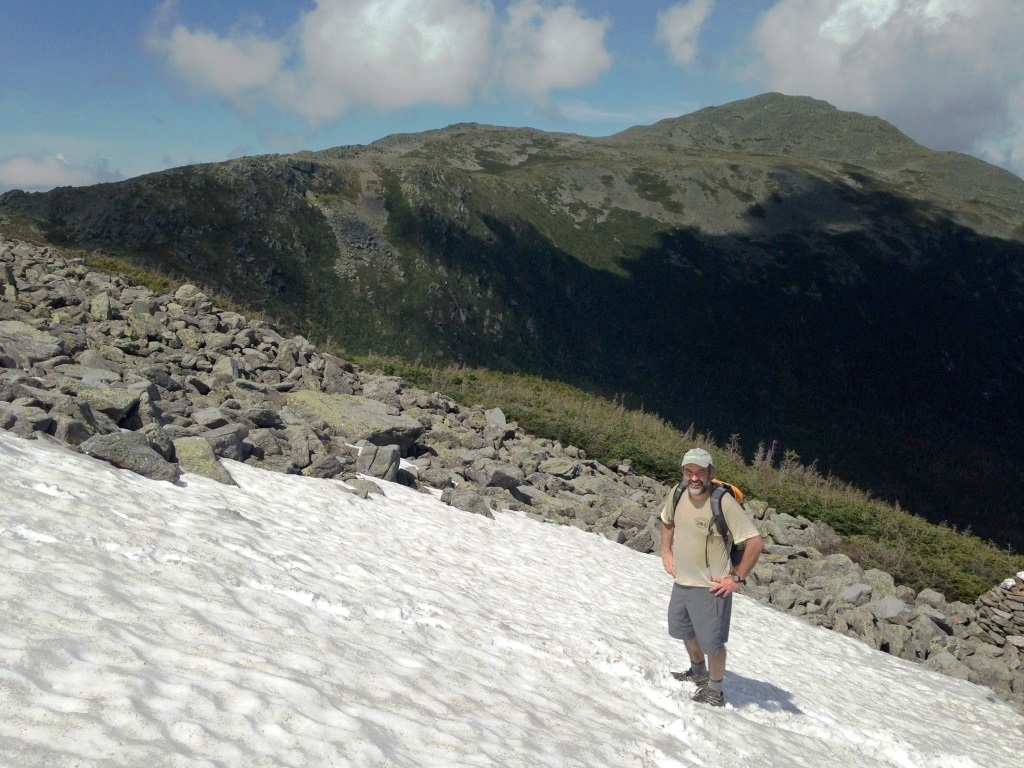 There never seems to be anyone on the Alpine Garden trail, which I find surprising because it's so beautiful and with good footing, but Peter had the plausible argument that folks just want to go to the top of Mt. Washington. We had no such yearning and just enjoyed the views along the trail. As we got closer to Tuckerman Ravine we had a nice view of Boott Spur (left), passed the Lion's Head Trail, and peered down into Tuckerman Ravine (right) 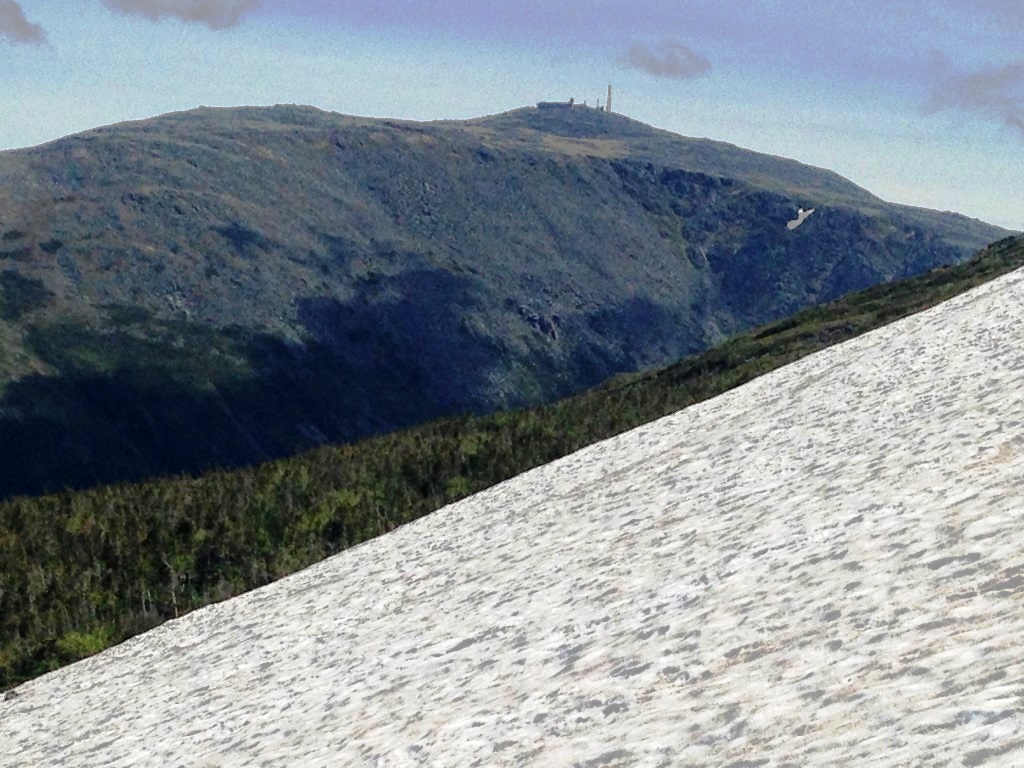 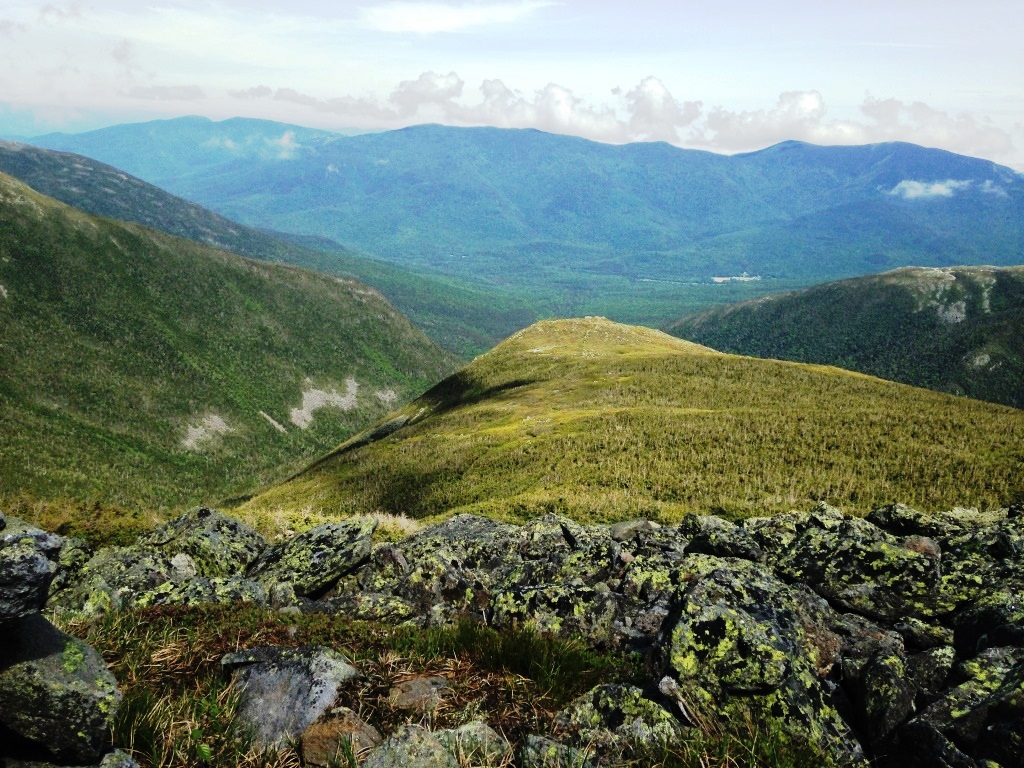 The hike down Tuckerman Ravine is spectacular. There's water everywhere, appearing to sprout from the rock and forming all kinds of cascades down the headwall. On my July 2009 hike with Oscar the cascades were even more spectacular and there was still a lot of snow in the ravine. By now the snow was gone but we could still imagine it on the different runs down the ravine and reminisce about our trip to Tuckerman the previous April. At the base of the ravine the stunted birches were in full color (right) and soon to be buried by snow. From there it was down to Hermit's Lake cabin and the uninteresting Tuckerman Ravine Trail. I'm so glad I did Huntington Ravine - I'll be talking about that hike for a long time.