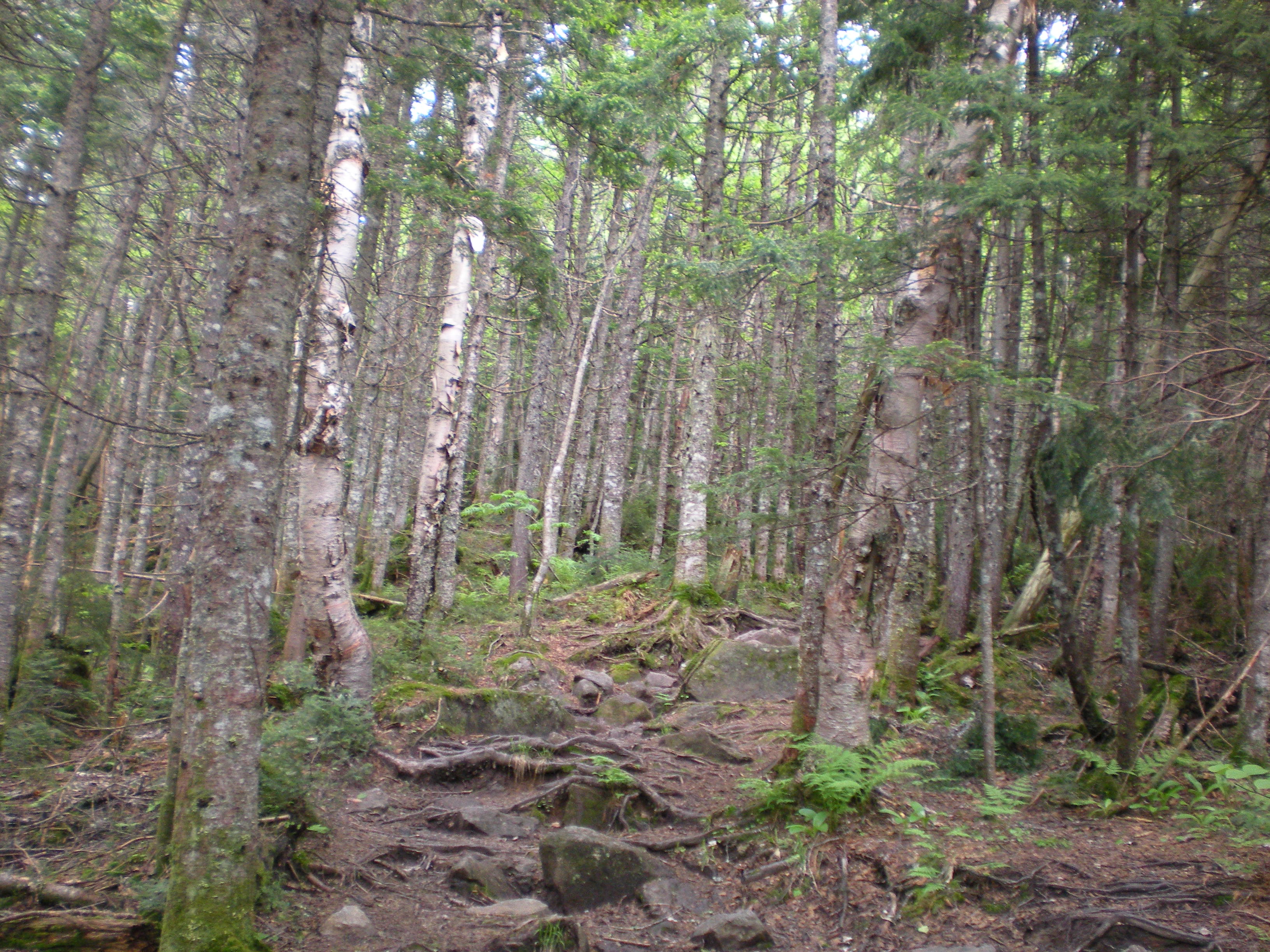 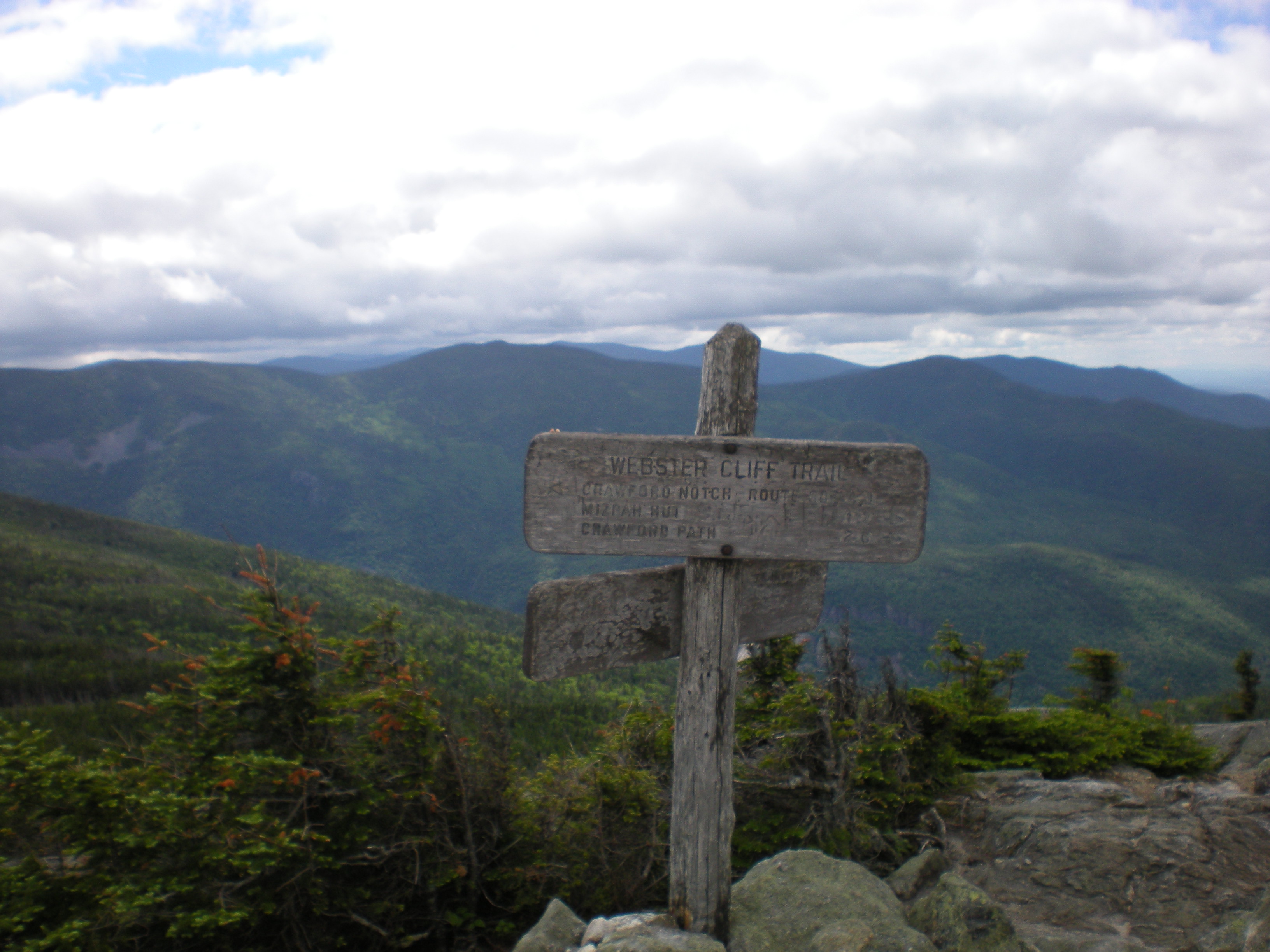 I had already done the Webster-Jackson Loop this season on May 16 (read my account of the May 16 hike), but Alex still had to add Mt. Jackson to the list of his 4,000 footers of New Hampshire so it was a good reason for me to go with him. On May 16 there was up to five feet of snow above 2,500' and a lot of blowdowns across the trail, and I was curious to see if there would be any snow left and if the trail had been cleared. For a change we climbed Mt. Jackson first. We climbed through beautiful woods (left) with not a single trace of snow. Amazing that so much snow could melt so fast! All that was left was a good legacy of mud. Approaching the top we walked past the weather-beaten trail sign (right). 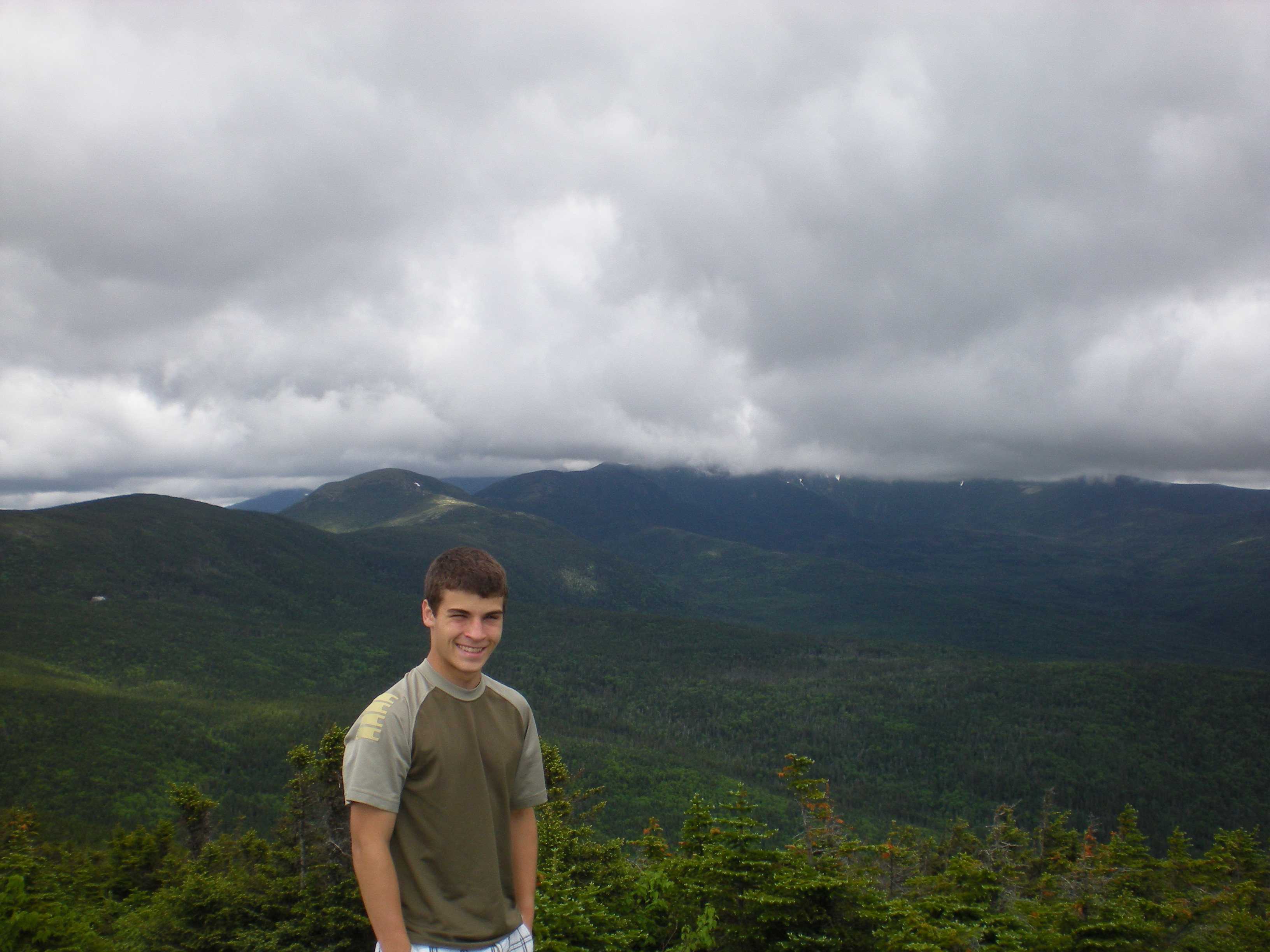 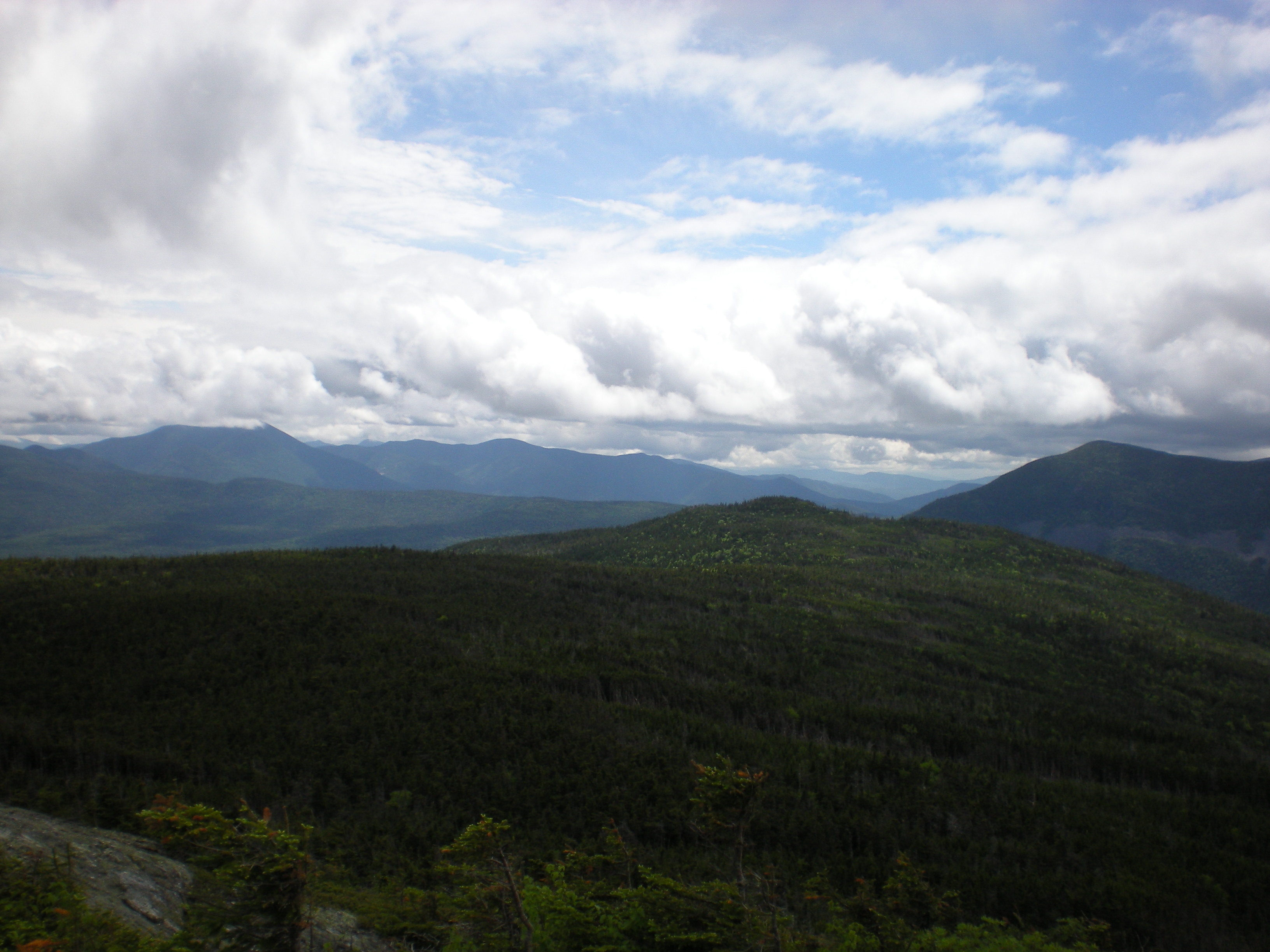 We got to the top of Mt. Jackson and I took Alex's picture (left) to confirm the conquest of his 29th 4,000 footer! (19 to go). The view is to the north towards the southern Presidentials. The specks of white on the left are Mitzpah Hut on the flank of Mt. Pierce and, further away, a forlorn patch of snow on the flank of Mt. Eisenhower. Mt. Washington is in the center of the picture but is socked in cloud. The view to the south (right) shows Mt. Webster where we would be headed. There was not a breath of wind at the top of Jackson, which is highly unusual and a sharp contrast to the May 16 hike! A remarkable consequence is that we were bothered by black flies, whereas in the woods there were no bugs. Perhaps this is why we were alone at the top - usually Jackson is a popular mountain because of the 360o view. There were no gray jays either. Normally they hang out at 4.000' and you can count on seeing them at that altitude but I haven't seen any this season - what's going on? I miss sharing my lunch with them. 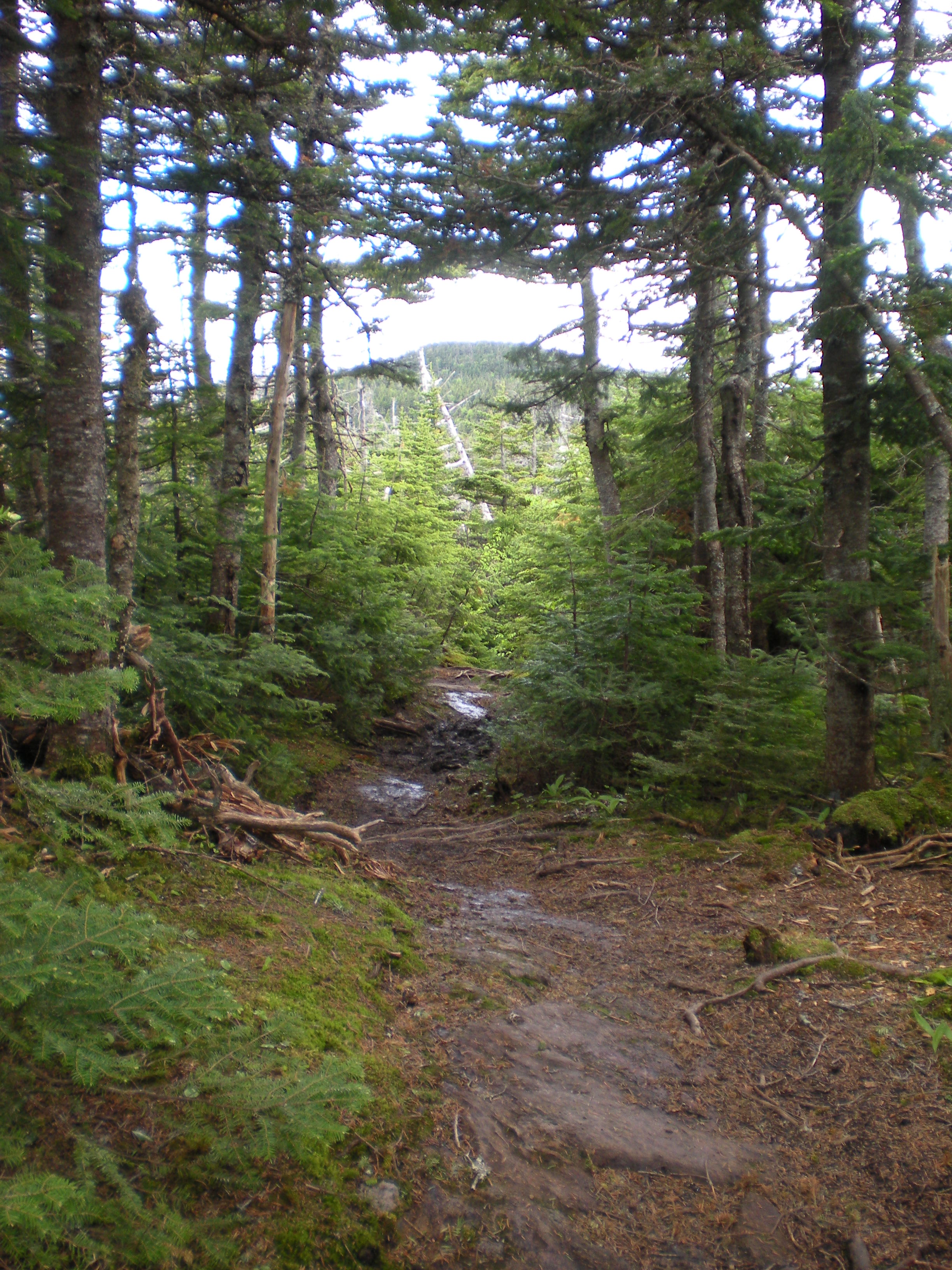 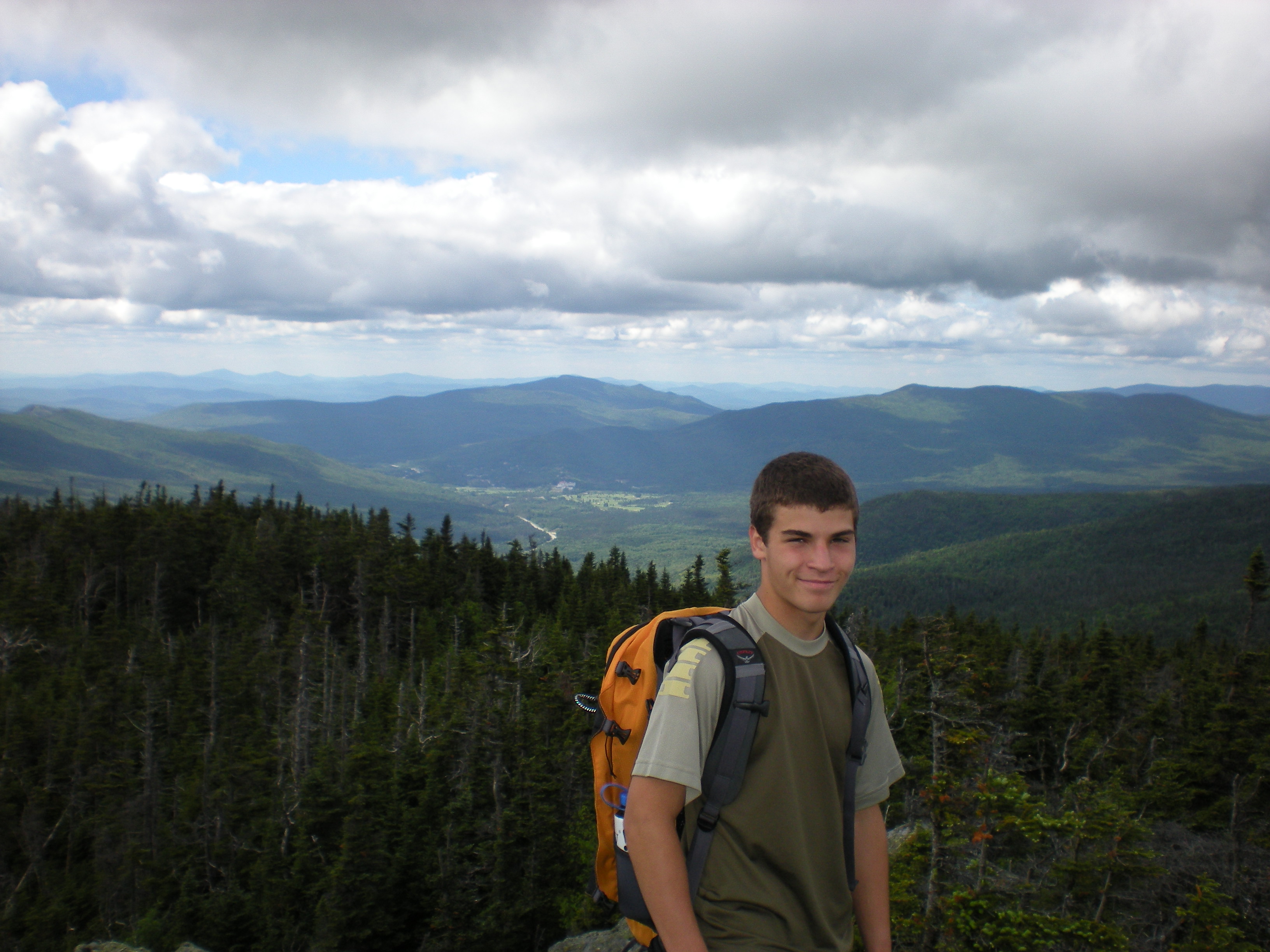 We then went on to Mt. Webster, about 1.4 miles down a col and back up, much of it on fine ledge. On May 16 that traverse was an obstacle course because of all the blowdowns, but now everything was cleared and the trail was easy to follow. Thank you trail crew! This is a very pleasant traverse with a fine view of Mt. Webster about halfway (left). We got to the top of Mt. Webster, which is not quite a 4,000 footer but Alex got his picture taken anyway with Bretton Woods in the background (right). Same scenario as Mt. Jackson, there was not a breath of wind at the top and the black flies were a little bothersome. 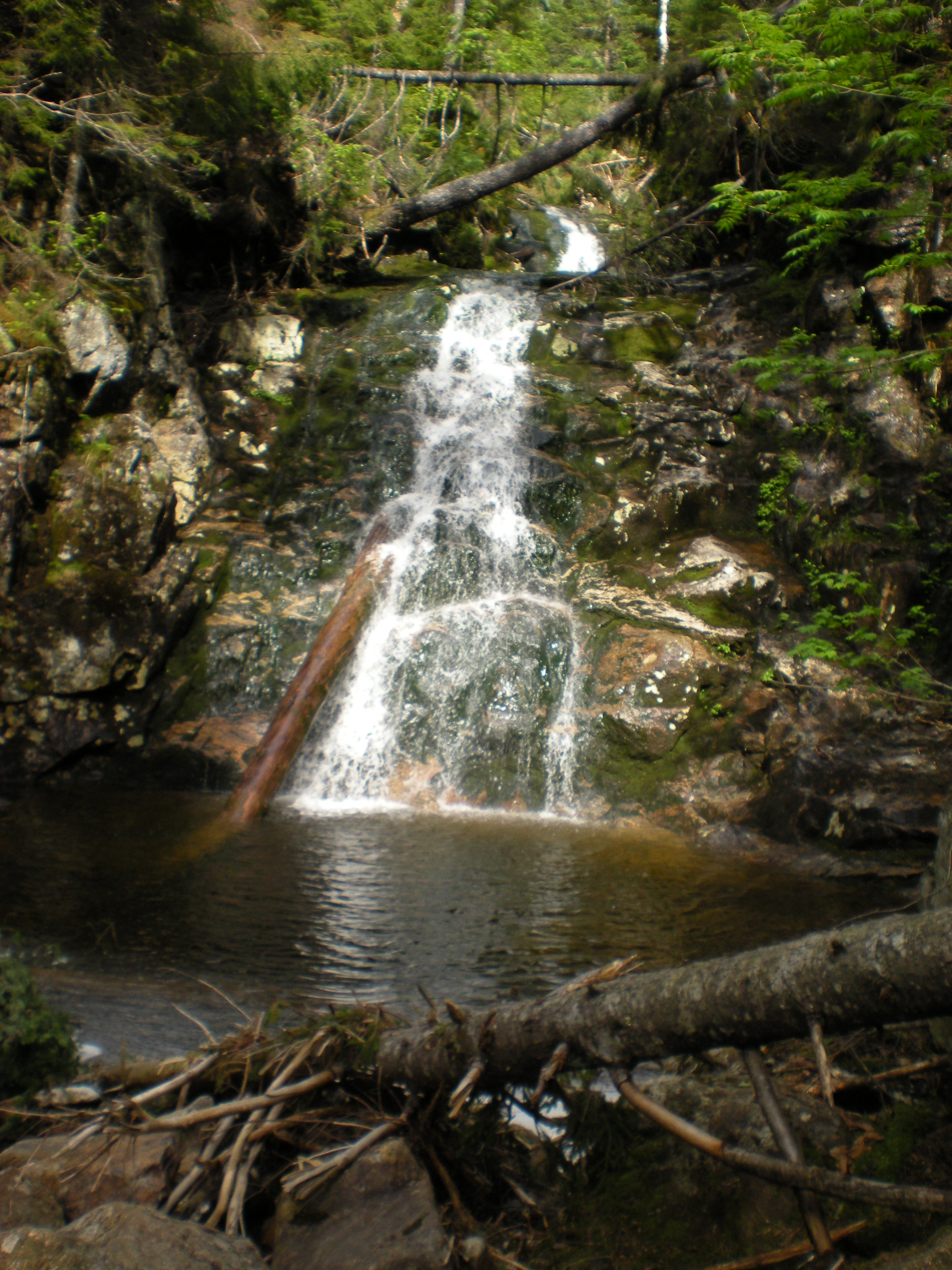 We hung out a while on the top of Mt. Webster, which features remarkable cliffs and precipitous slides down towards Crawford Notch. On the left is a view of Mt. Jackson looking north from Webster. And then it was down back to the trailhead. Shortly before reaching the junction with the trail up Mt. Jackson we passed Silver Cascade (right), which was very nice but had nowhere near the amount of water that I saw on May 16! (compare to the cascade on May 16). That's what happens when the snow has melted and the trees start pumping...Stay tuned for Alex's next 4,000 footer!