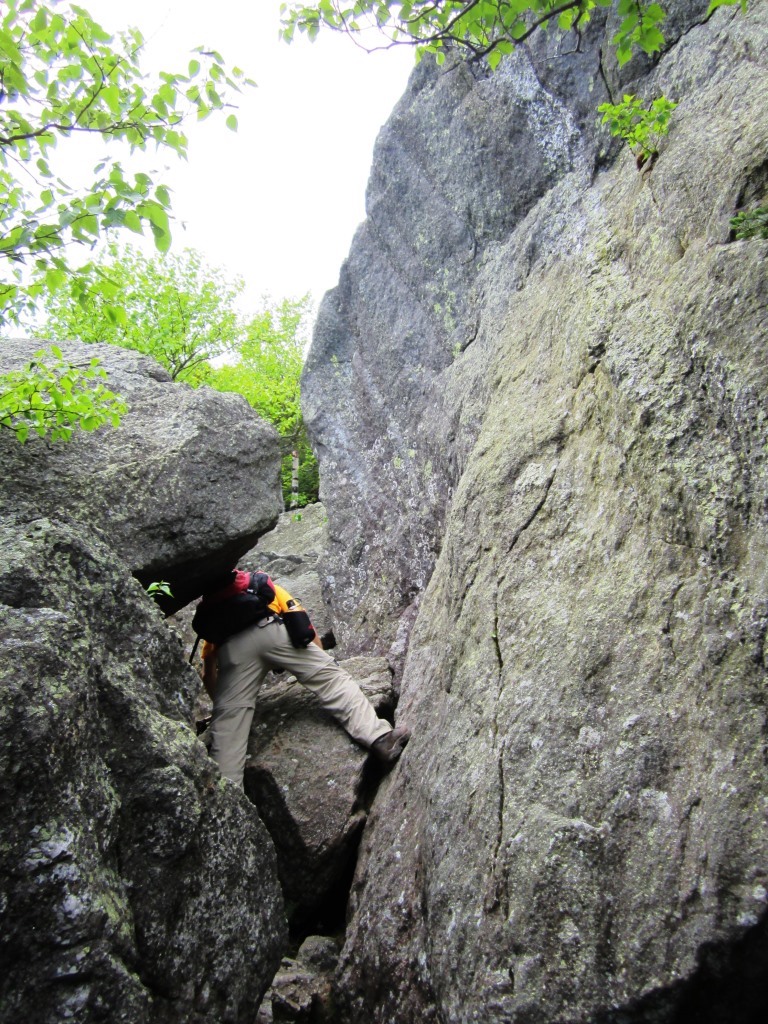 I had been previously in King Ravine three years ago with Peter Wyatt, when we had done the regular climb up the headwall by the King Ravine Trail. This time we wanted to try the Great Gully Trail, described in the AMC Guide as one of the toughest trails in the White Mountains and "not for the faint of heart". I also wanted to check out the famous Subway Trail in the floor of the ravine - last time we were there it was wet and slippery and I was faint of heart. We hiked up from Appalachia (1,300') by the Air Line to the King Ravine Trail. At 3,200' we saw our first ice, well hidden in a cave. We also saw the familiar White Mountain sign "Danger! Turn around while you still can!" (left) but I generally see it just before going over tree line - it was surprising to see it at such low elevation. Probably the reason is that beyond this the climbing gets tough and there is no easy way out. Indeed the continuing climb to the floor of the ravine was a scramble over big boulders (right), though nothing difficult. 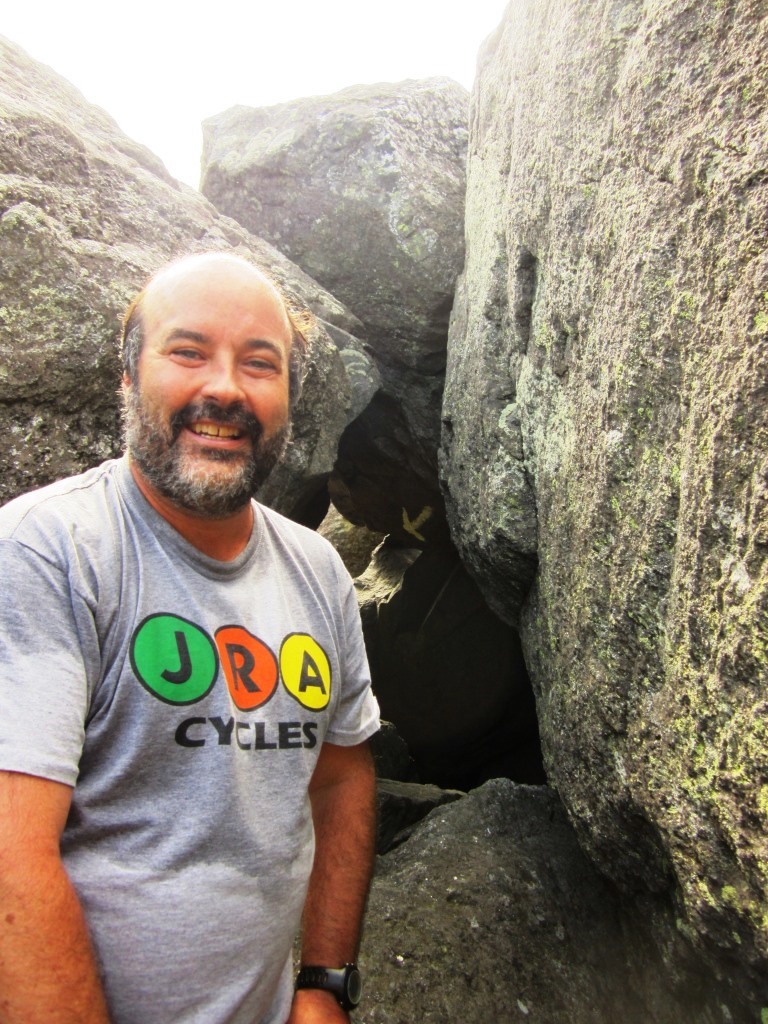 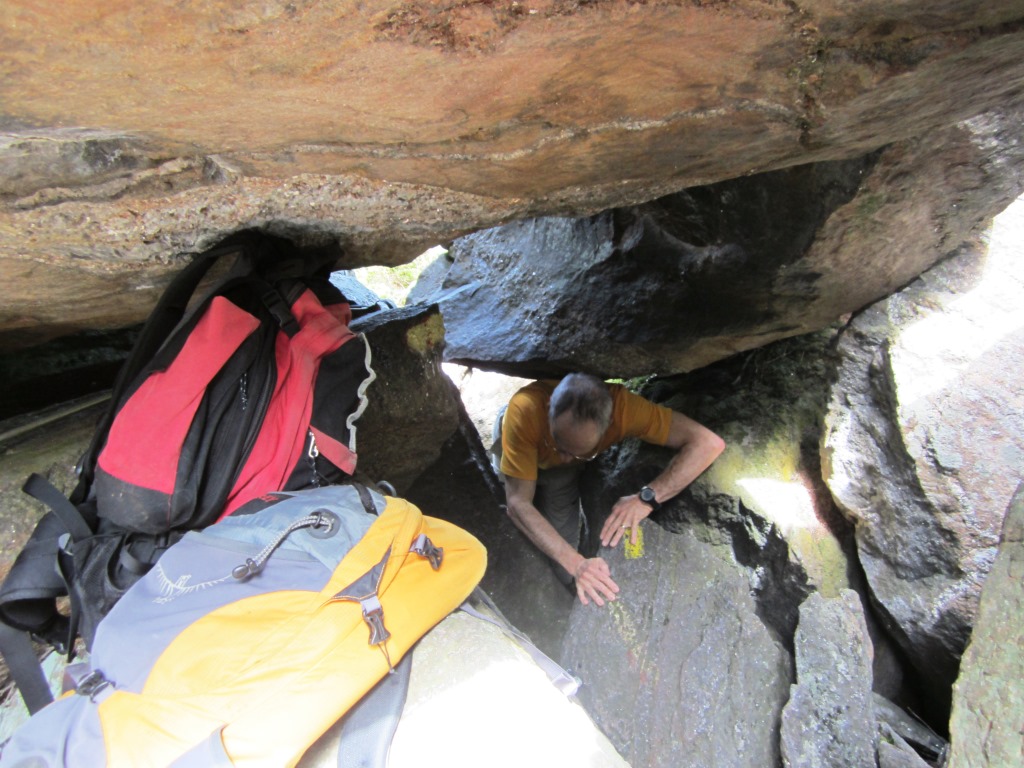 We got in this manner to the floor of the ravine. At that point we had a choice - take the Subway Trail that makes you crawl through caves or the Elevated Trail that makes you scramble over boulders . Last time we had done the Elevated but today with dry conditions we decided to go for the Subway. It was a lot of fun - we had to squeeze through a series of narrow passages (left and right) and hop over boulders with bottomless caves on both sides. It felt like an amusement ride, and although the trail is just 220 yards it took us a long time. There was quite a bit of snow, not only in caves but also in the open. We finally got out and it felt weird to be on a real trail again. 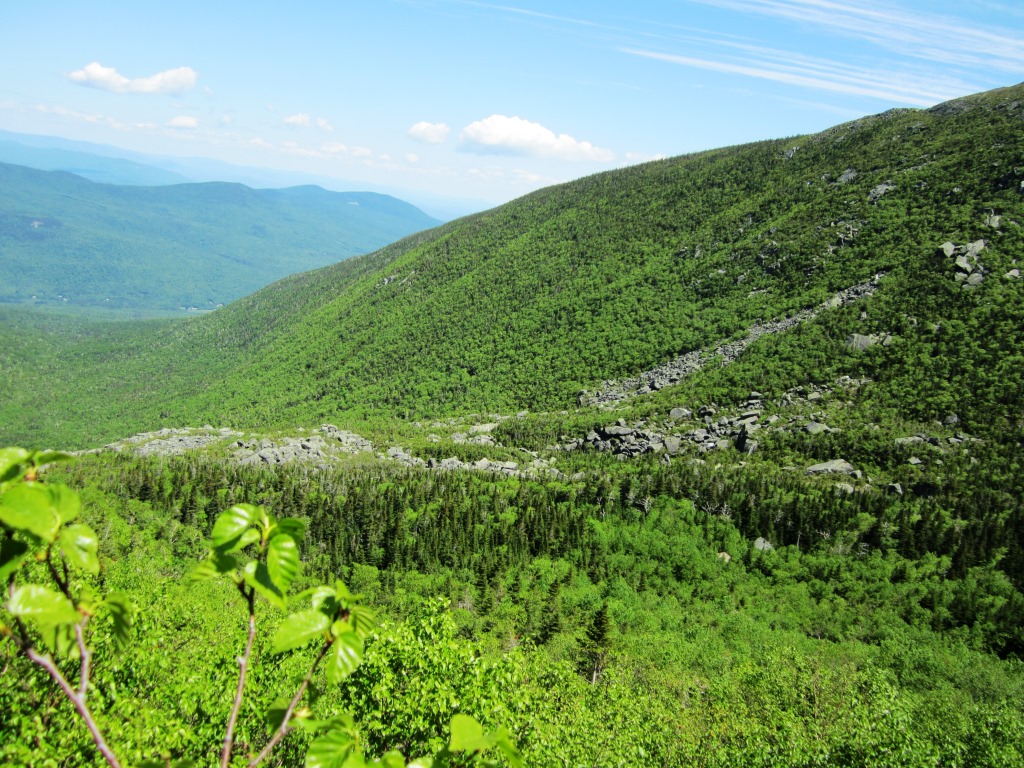 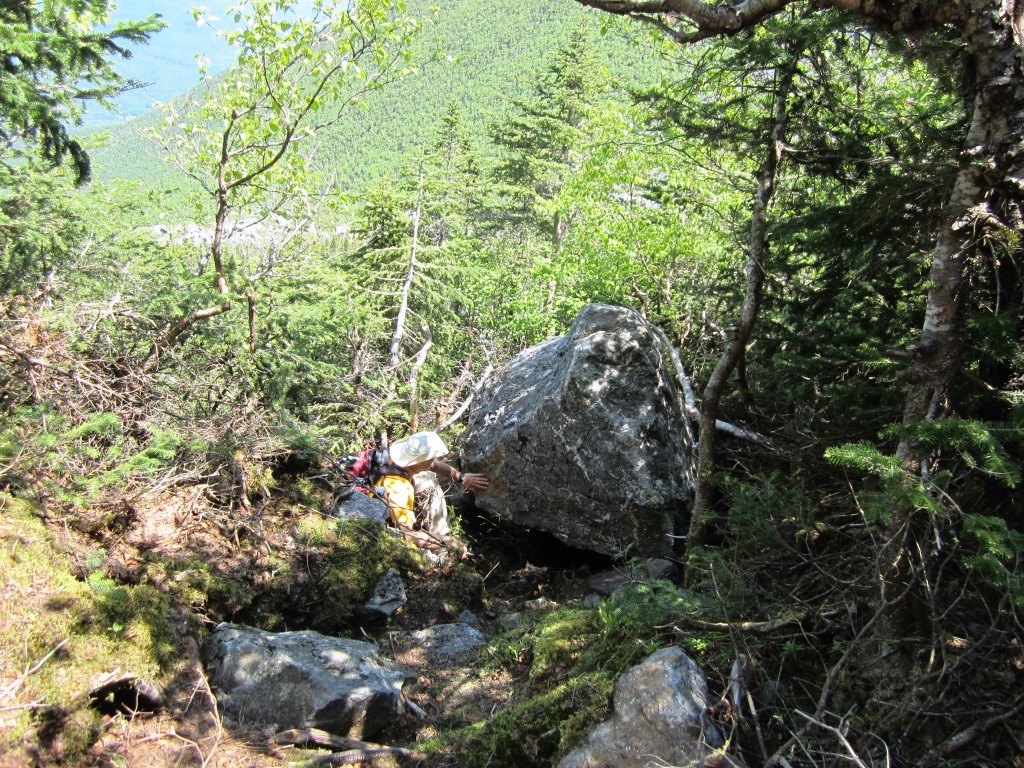 Immediately after exiting the Subway was the entrance to the Great Gully Trail going up the headwall. It started off at a moderate grade, with great views of the Ravine floor (left). At one point a huge boulder obstructed the trail (right) and Peter commented that it must have been very recent - from an avalanche, perhaps? 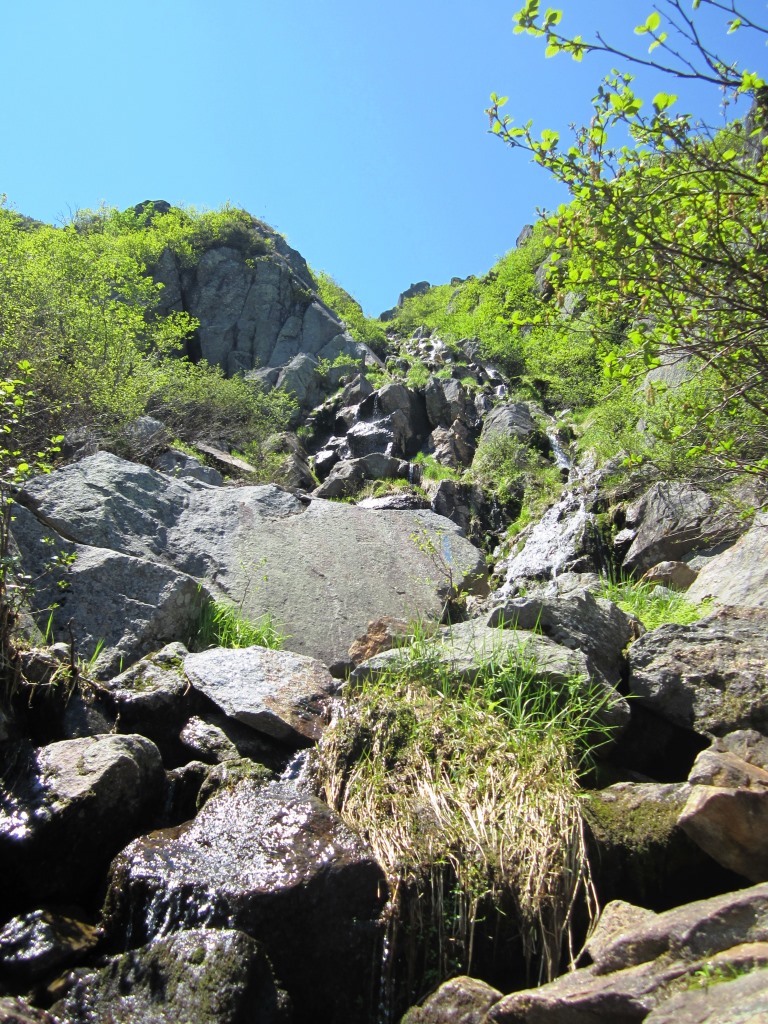 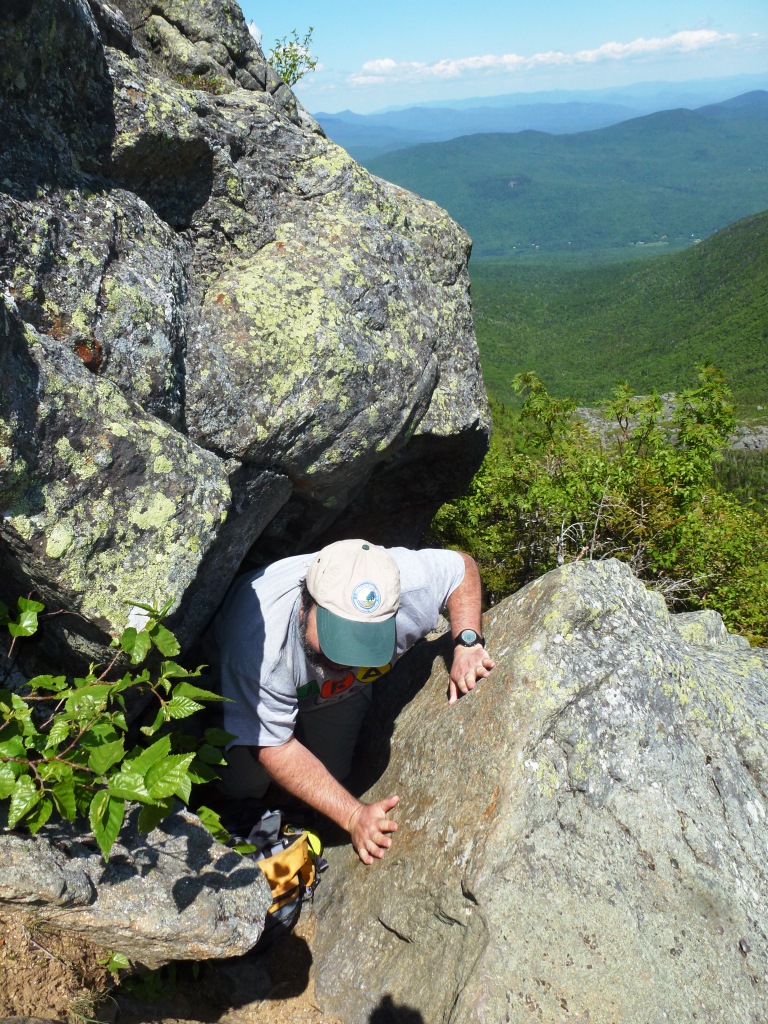 After a while the trail became 'extremely steep and rough' (to quote the AMC guide) and would stay that way for the whole climb up the headwall. Midway we were greeted by a beautiful cascade (left) and immediately above was the spot with a rock overhang and sheer drop below that the AMC describes as 'not for the faint of heart' (right). But I found it to be no problem at all even though I'm scared of heights - just take off your pack, crawl through the passage, and don't look to your left. 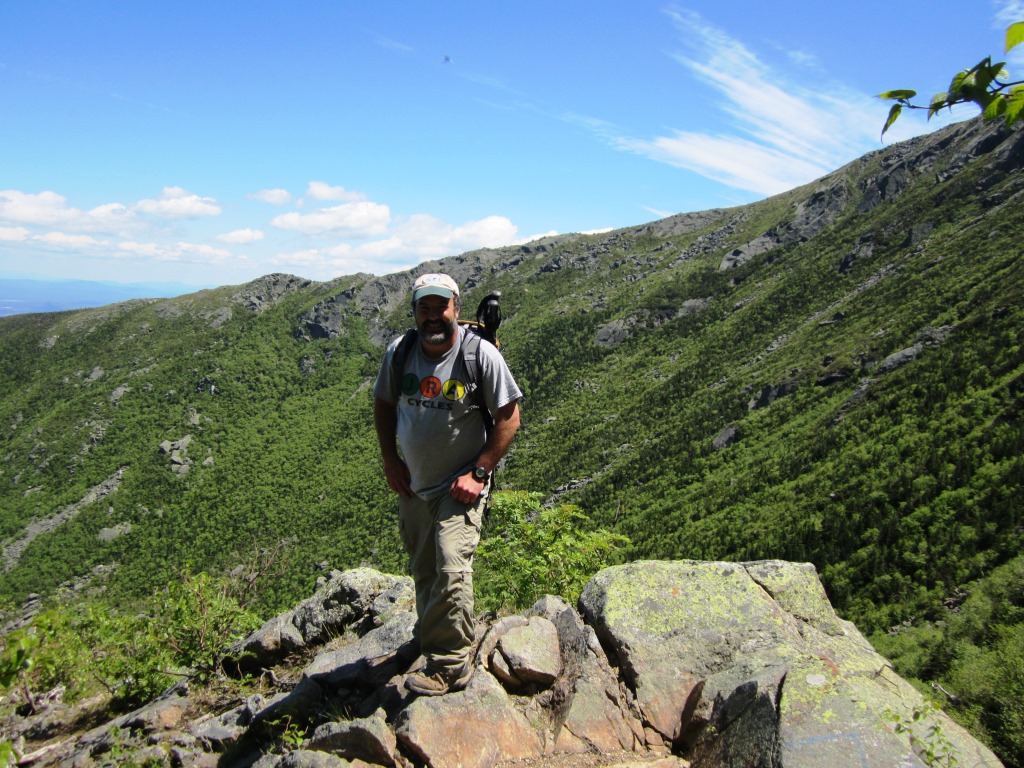 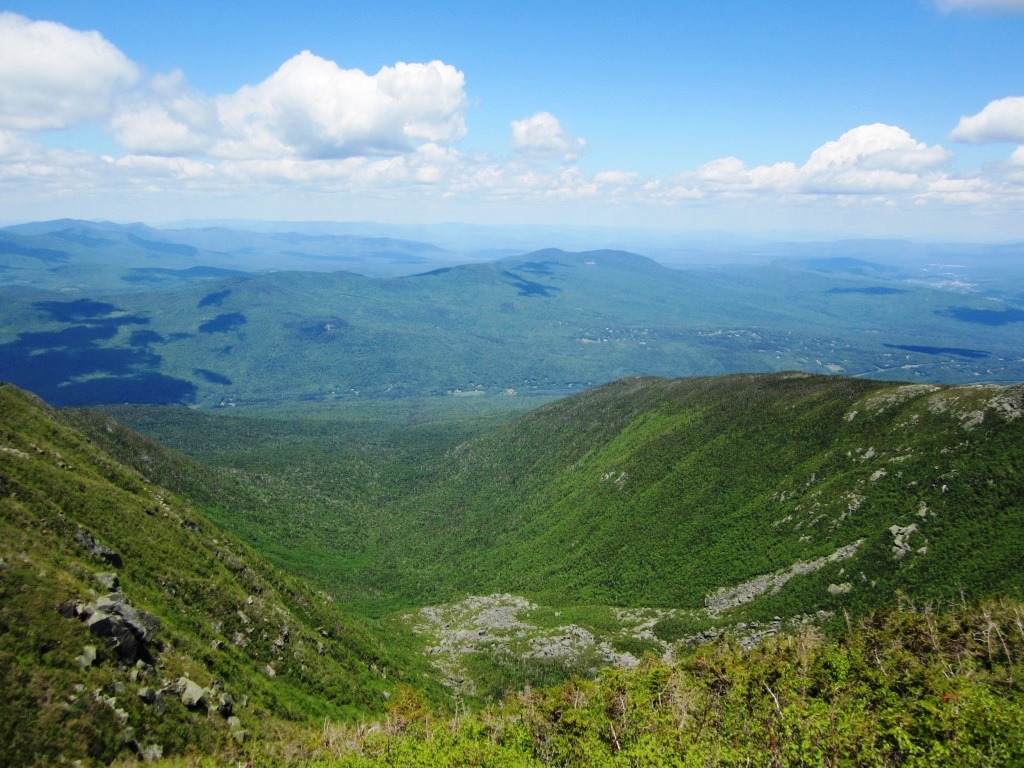 We continued on the final climb out of the Ravine with great views (left and right). It is difficult to convey the steepness in pictures but let's put it this way: the Great Gully Trail climbs 1,700 feet in one mile. That's a sine of 1/3 so the mean slope is 20 degrees. No stroll in the park. 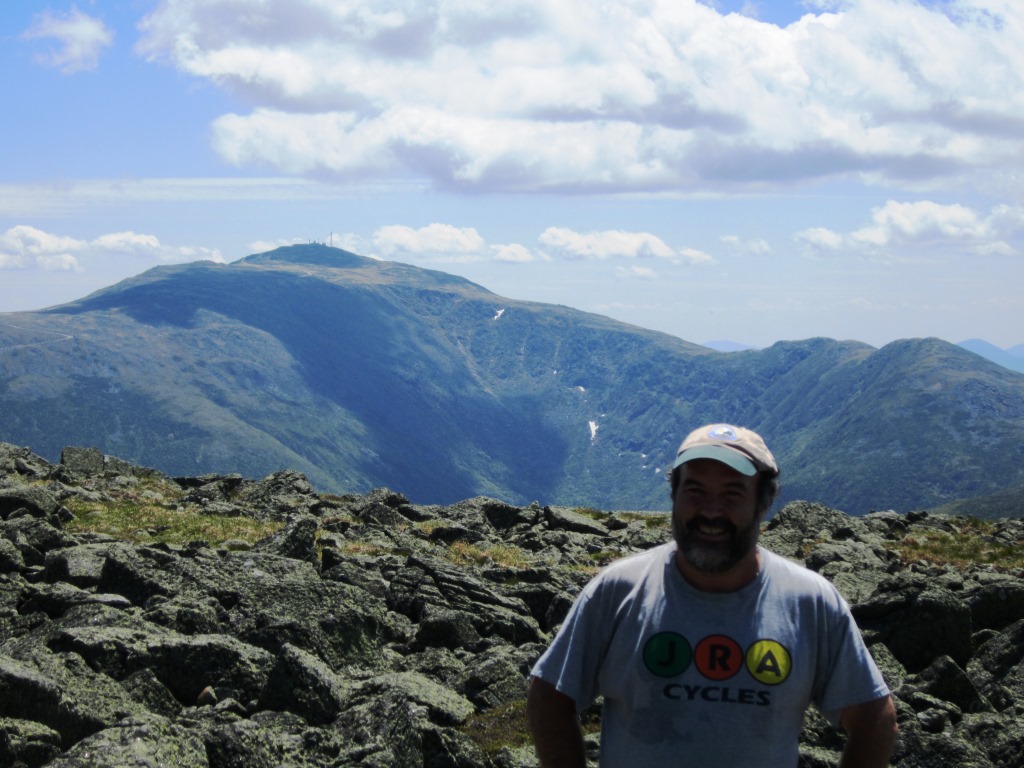 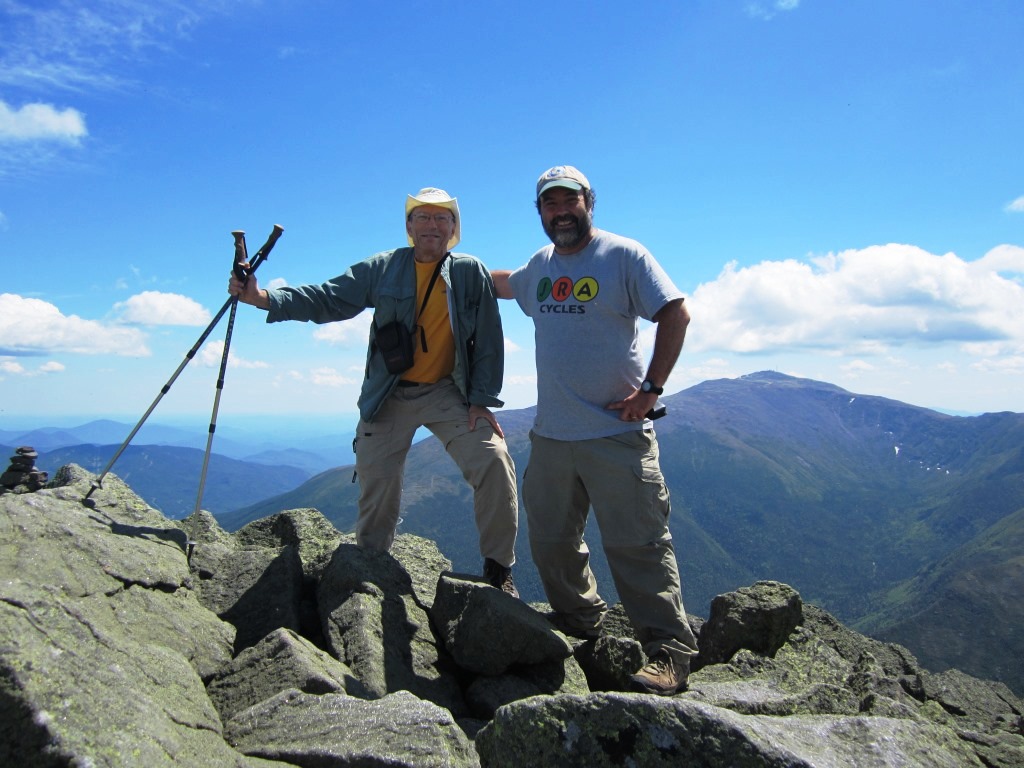 We finally got above the headwall at 5,200' and rolled into Thundestorm Junction, where a number of trails intersect. We felt we should get to the top of Mt. Adams (5,800') while we were at it and so left our pack at the Junction and headed up. The climb to Adams is a jumble of rocks, but it felt very easy after the Great Gully Trail and were also packless with the wind in our backs. We got to the top effortlessly and took the classic view to Mt. Washington (left and right). Until the climb to Adams we had seen no one on the trail but Adams had quite a few people on top - crowded for a Friday in June. 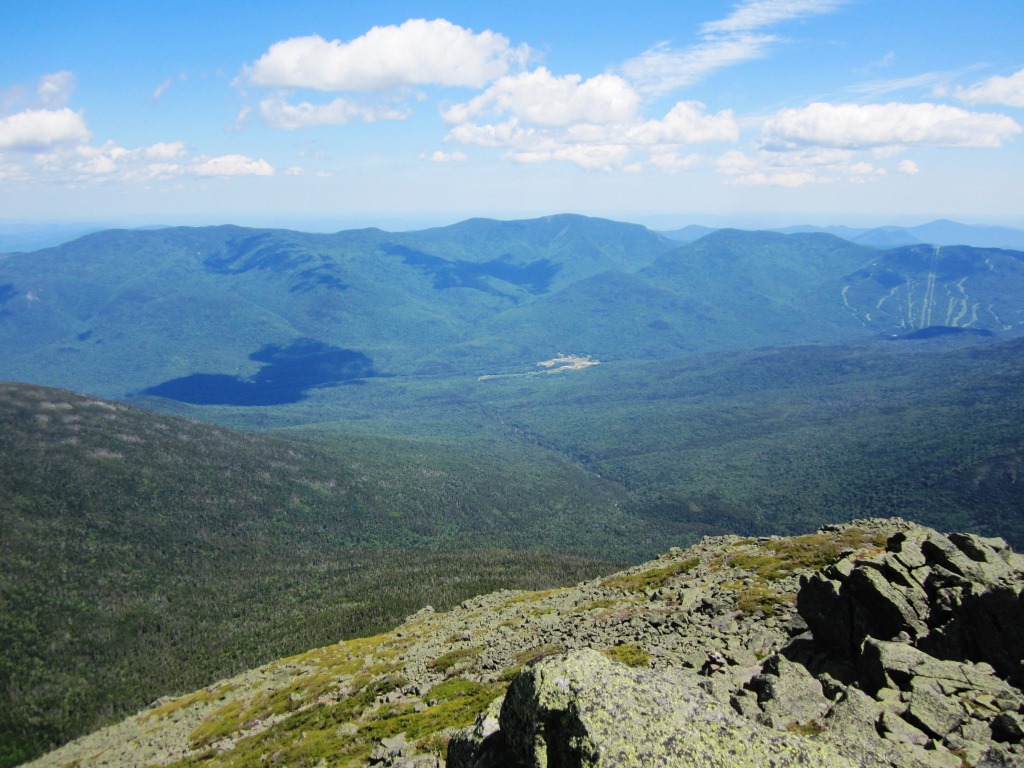 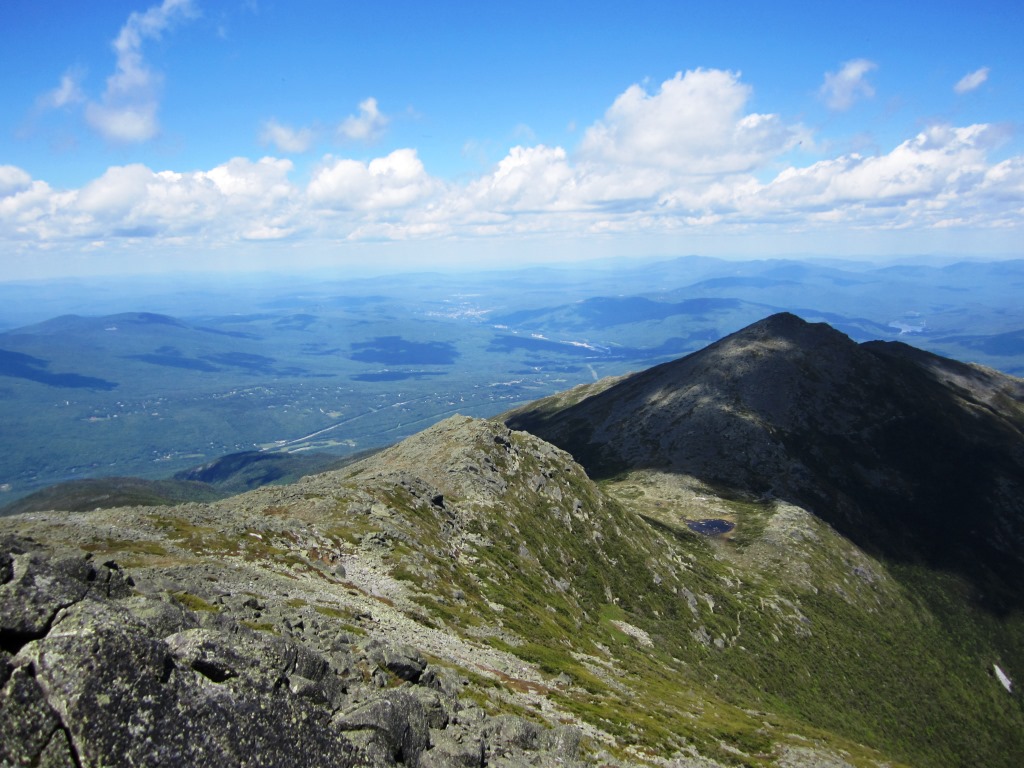 Last time I was on Adams was July 6 last year on a windless day and the black flies were bothersome. But today the strong breeze kept them at bay. I dropped below Adams to the bluff on the east side to take pictures of the Mt. Washington Valley with the Wildcat ski area (left) and the classic view of Star Lake and Madison (right) but now I was out of the wind and the flies were pouncing on me. I quickly got back to the top from which we made our way back down on the bug-free windward side. 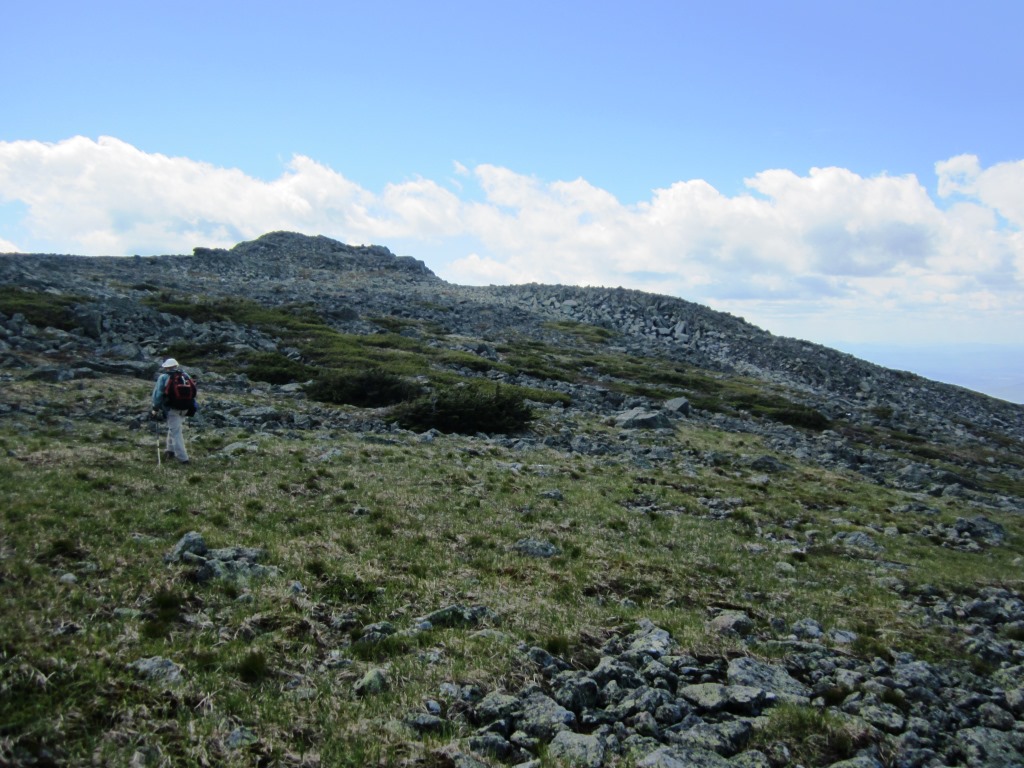 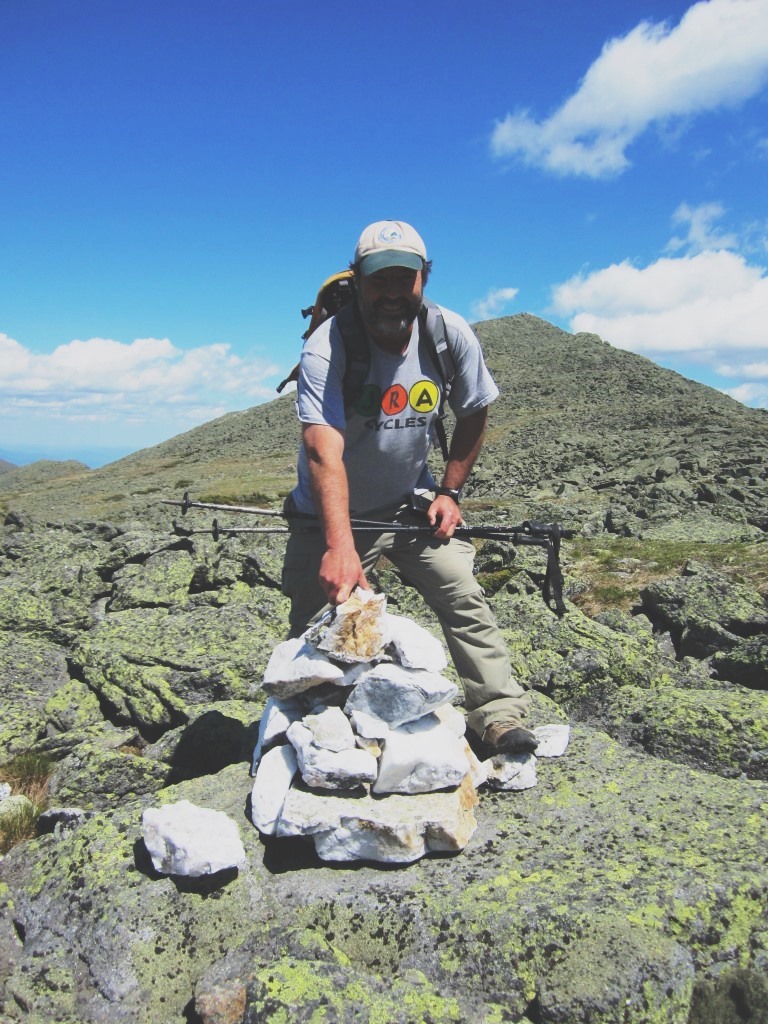 Mt. Adams has three minor summits (John Quincy Adams, Sam Adams, Abigail Adams) and we decided to hit the last two on our way down. We hiked up the tundra to Sam Adams (left) and along the way I saw an albino cairn (right). There were a lot of white quartz rocks in the area. 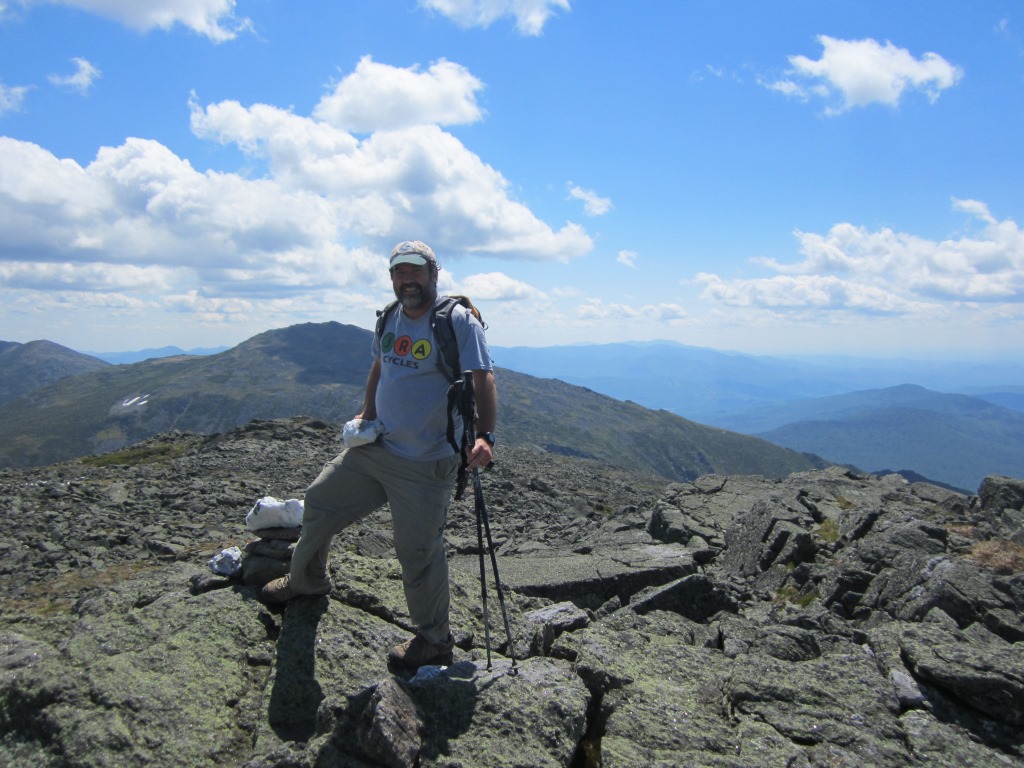 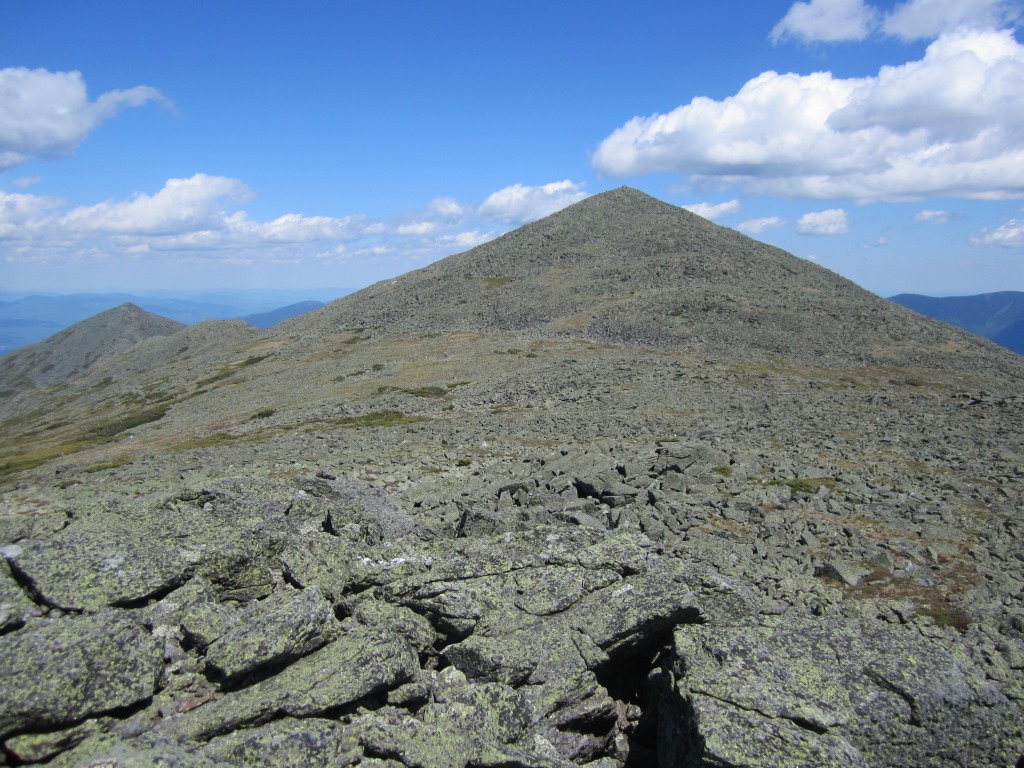 Here's me at the top of Sam Adams about to put another quartz rock on the impressive summit cairn (left). Sam Adams has the distinction of being the only spot from which Mt. Adams appears as a beautiful symmetrical triangle (right) rather than as a craggy peak which is what you see from all other angles. 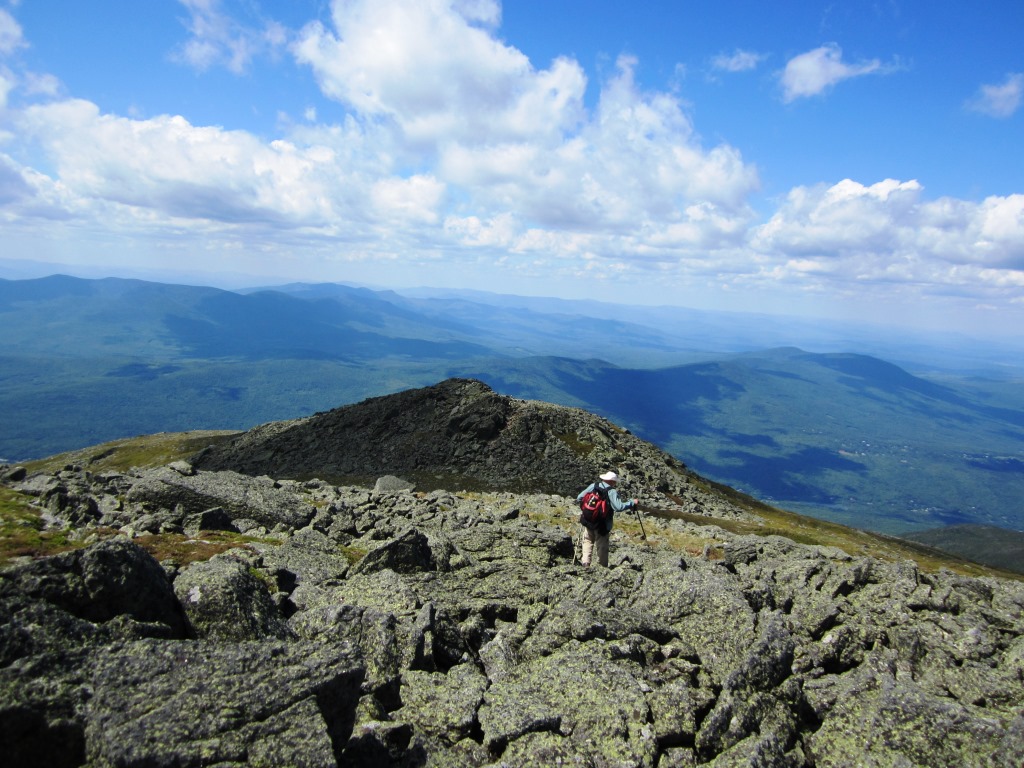 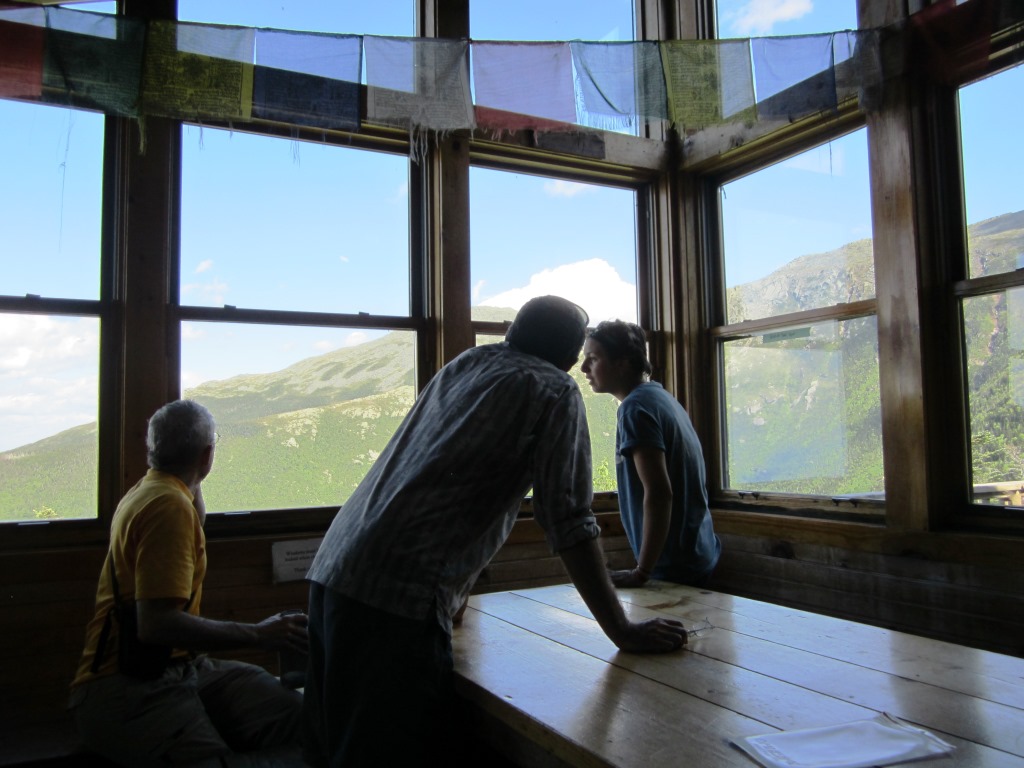 From there we went down and up to Abigail Adams (left), which is on Lowe's Path, and dropped to Spur Trail to continue our way down along the edge of King Ravine. From the Knight's Castle rock outcrop we had a good view of Crag Camp perched on the edge of the ravine. We dropped into Crag Camp, which I had described in my previous hike down from Mt. Adams, and spent some time chatting with the nice caretaker (right). From the deck we could see the Great Gully Trail (below left). 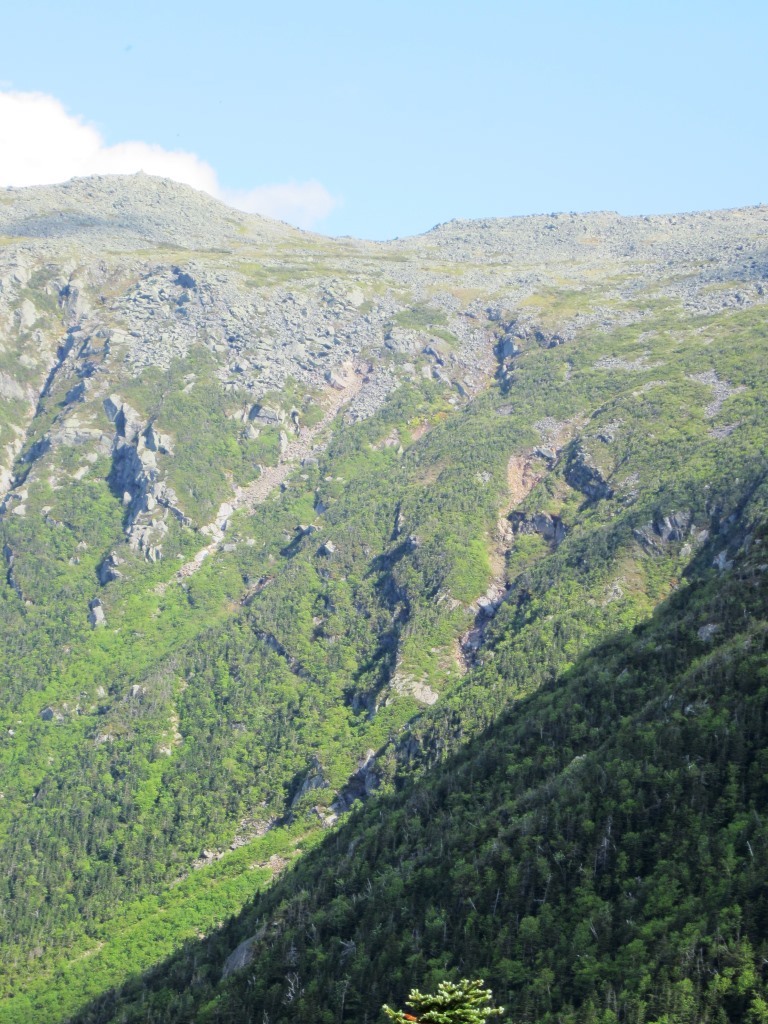 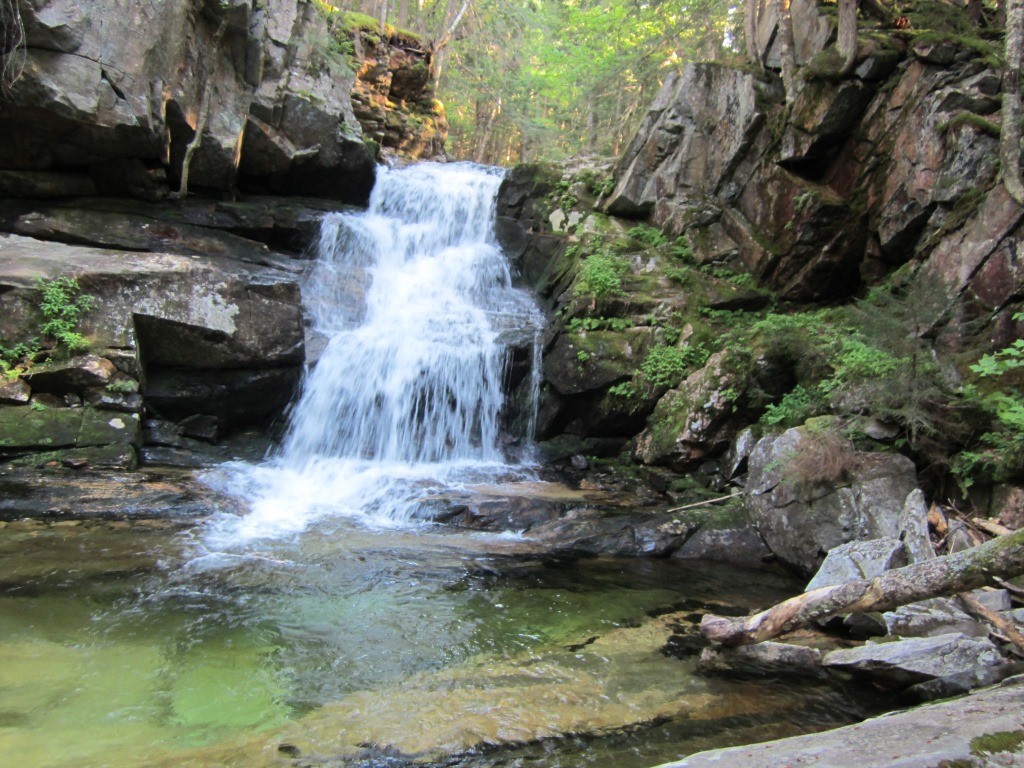 We were at 4,200' and had to go back down to Appalachia at 1,300'. It was a long way down. We followed the Spur Trail until a five-way intersection with other trails at which point we took the Amphibrach for the rest of the way down. There were several interesting side trips to waterfalls (right). 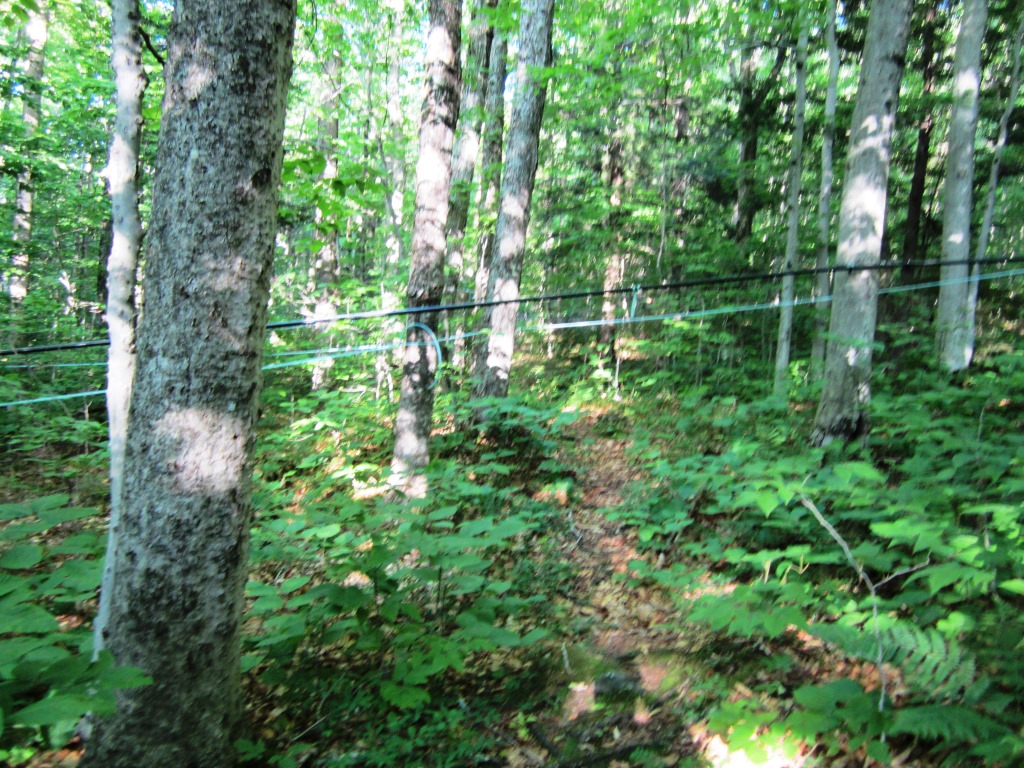 We finally got all the way down, but still had to hike 0.7 miles to get back to the Appalachia parking lot. We crossed an incongruous stone bridge built in 1932 (left) and took the Sylvan Way to get us back to the Air Line. Sylvan Way took us through a spectacular maple tree farm - a network of pipes tapping the sap and transporting it down, with pipes from individual trees connecting to a main pipe An impressive system. By the end of this hike I had red-lined four new trails: Subway, Great Gully, Amphibrach, Sylvan Way. Not bad!