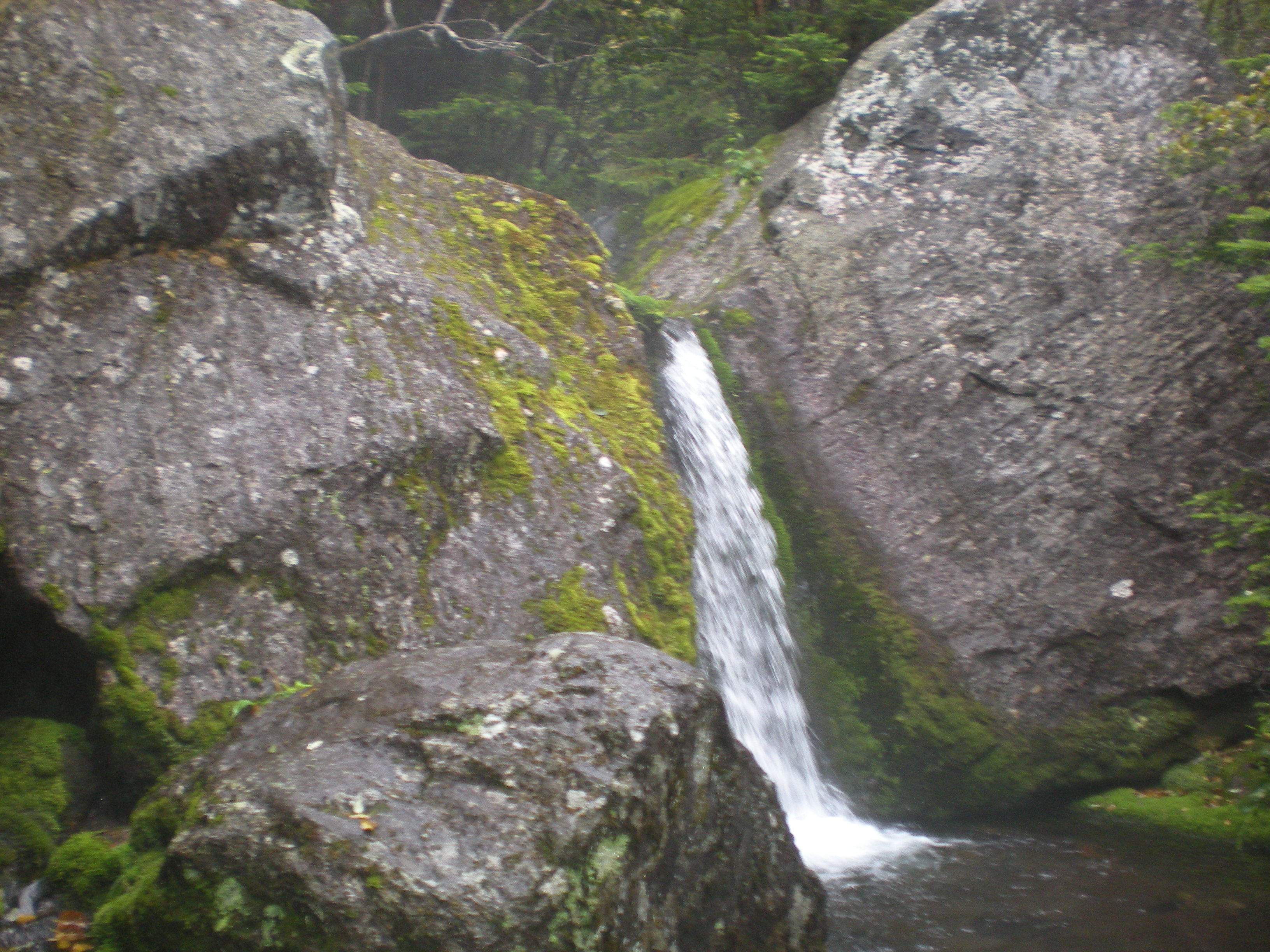 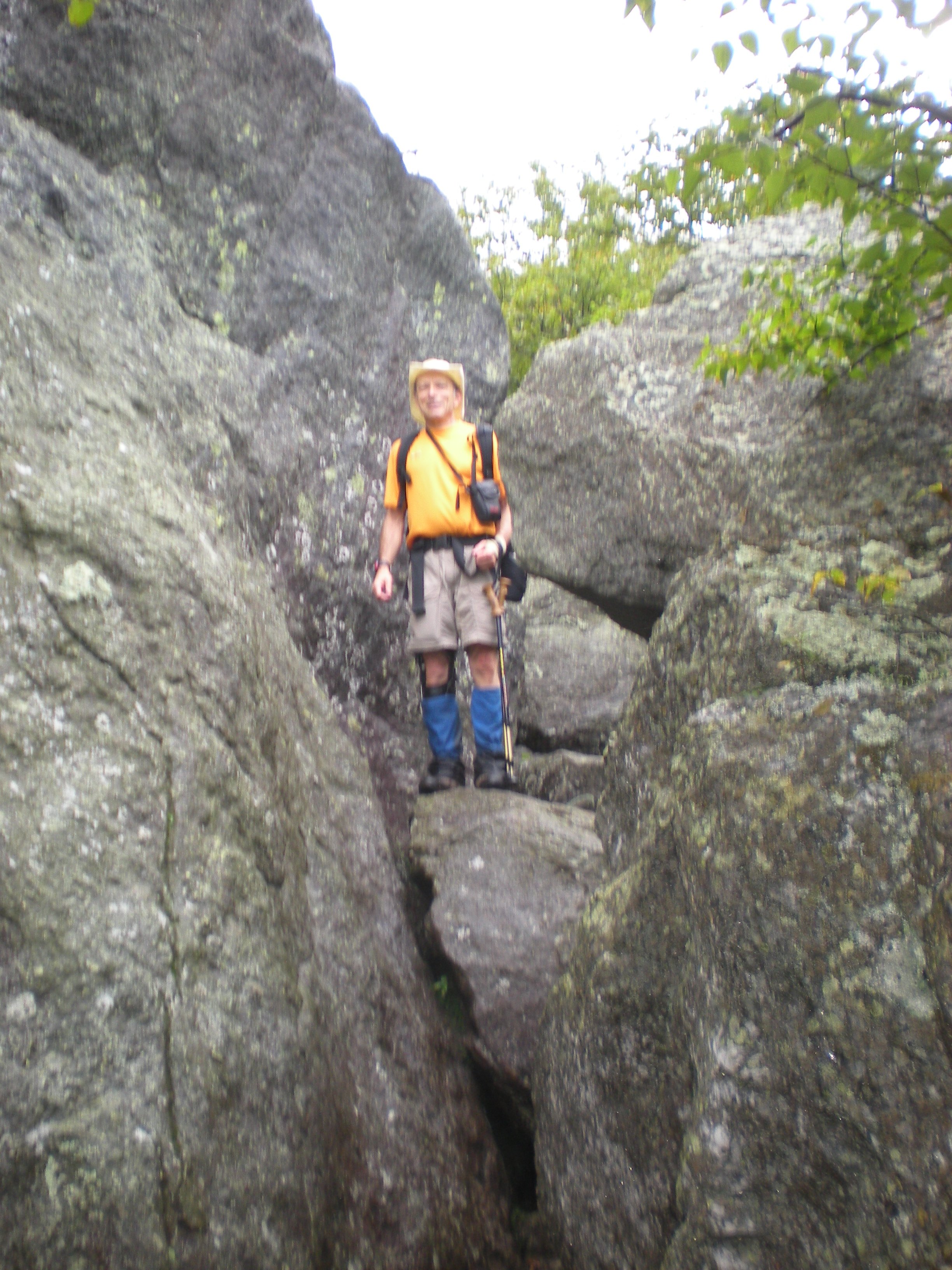 Year-round ice in the White Mountains - is that stuff of legend? Peter Wyatt decided to check it out with a visit to the famous ice caves of King Ravine, and climb the headwall to summit Mt. Adams while we were at it. We hiked up the Short Line trail from Appalachia under pouring rain, but as we entered the ravine the rain stopped and we were greeted by unassuming Mossy Fall (left). From then on the ravine was anything but unassuming. making us scramble up boulders the size of houses (right). Our hands were as important as out feet in the climb all the way up the headwall. 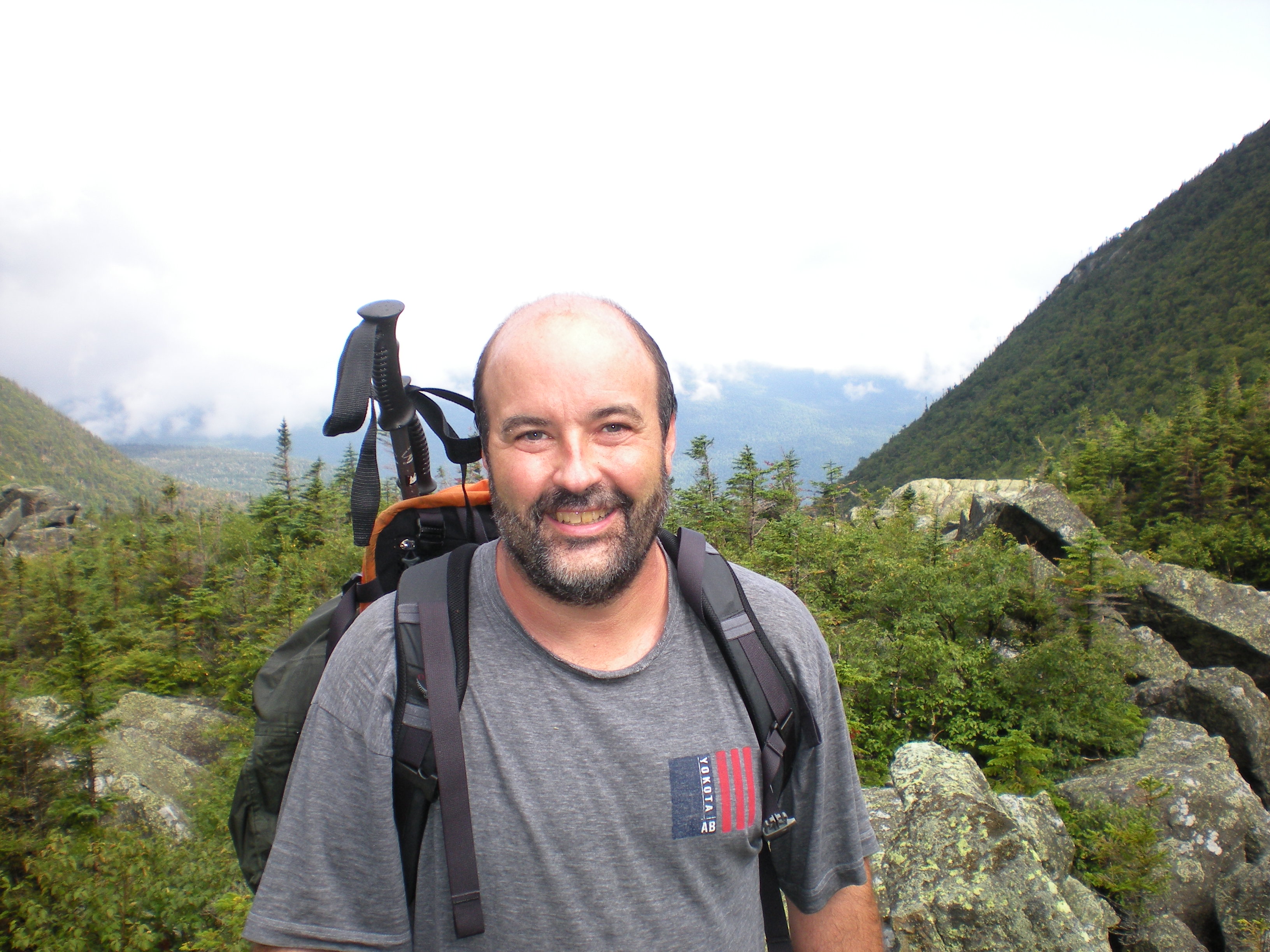 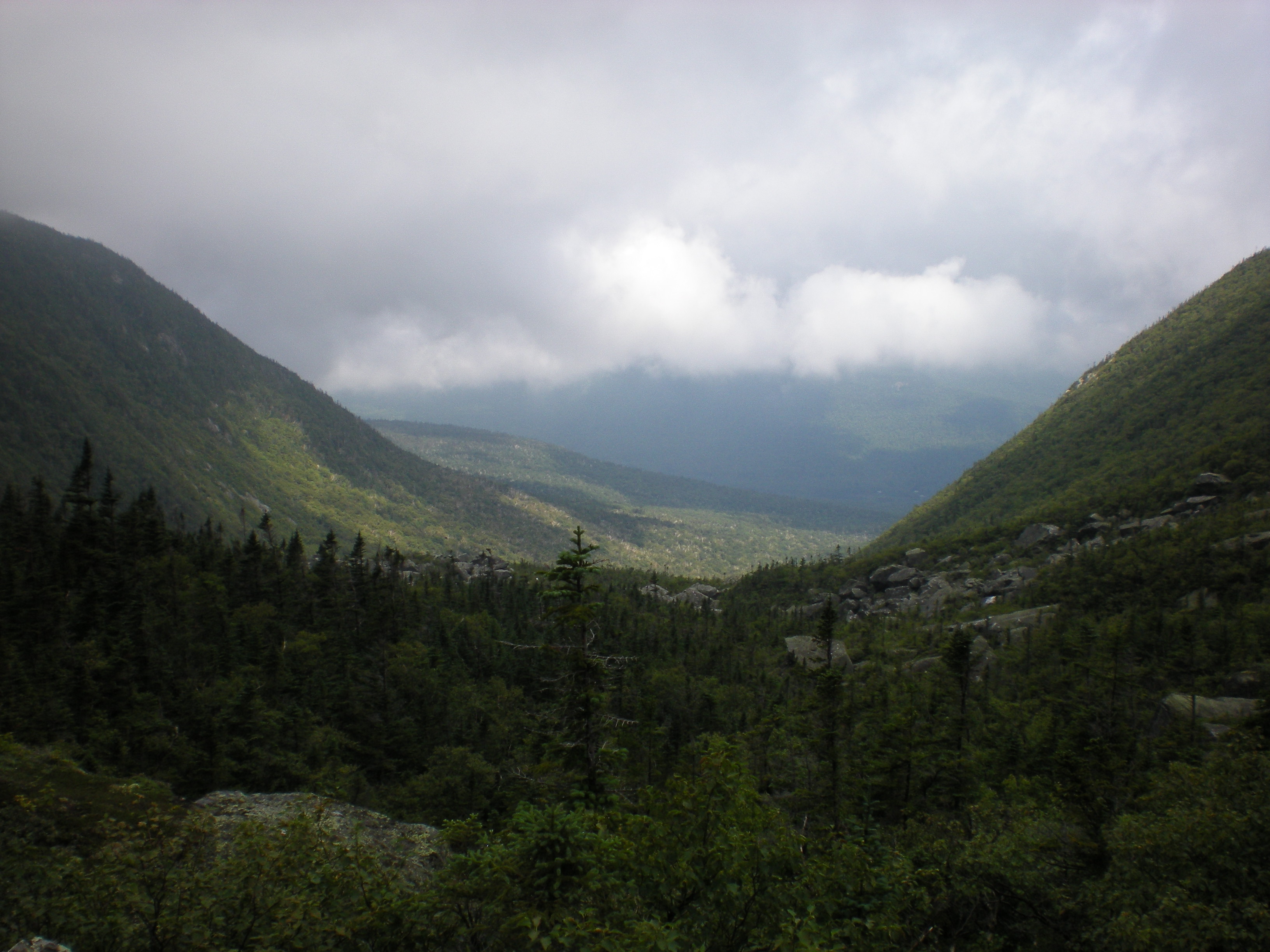 Here's a good picture of me on the floor of the ravine (left). This is an amazing place - a beautiful U-shaped valley and steep glacial cirque with a wild jumble of broken boulders at the bottom (right). We met a couple of hikers (only ones we would see in the ravine) who had given up on climbing the headwall because the rocks were so slippery. But that's where we were headed, with caution. The rocks were indeed very slippery from the early-morning rain. 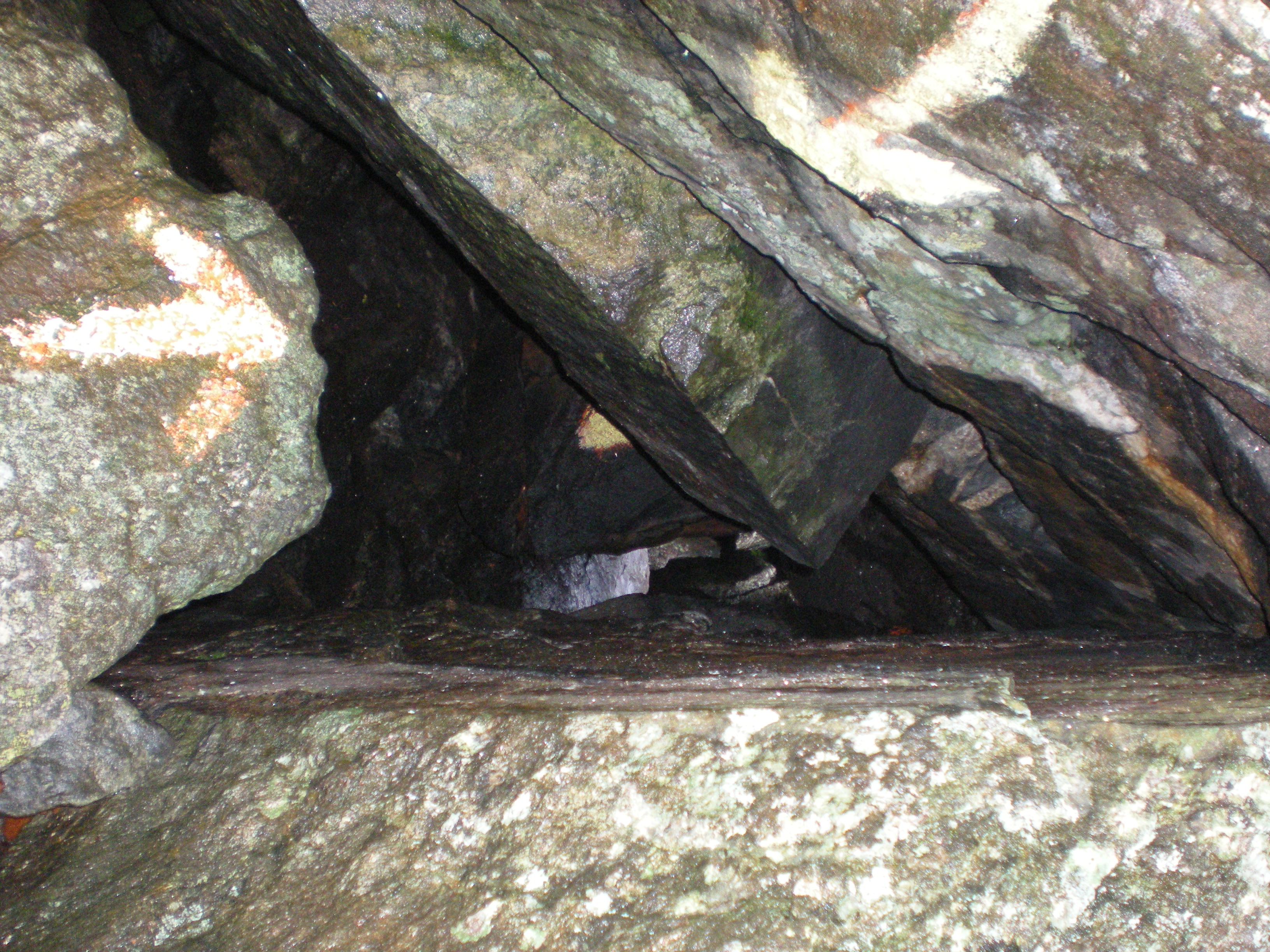 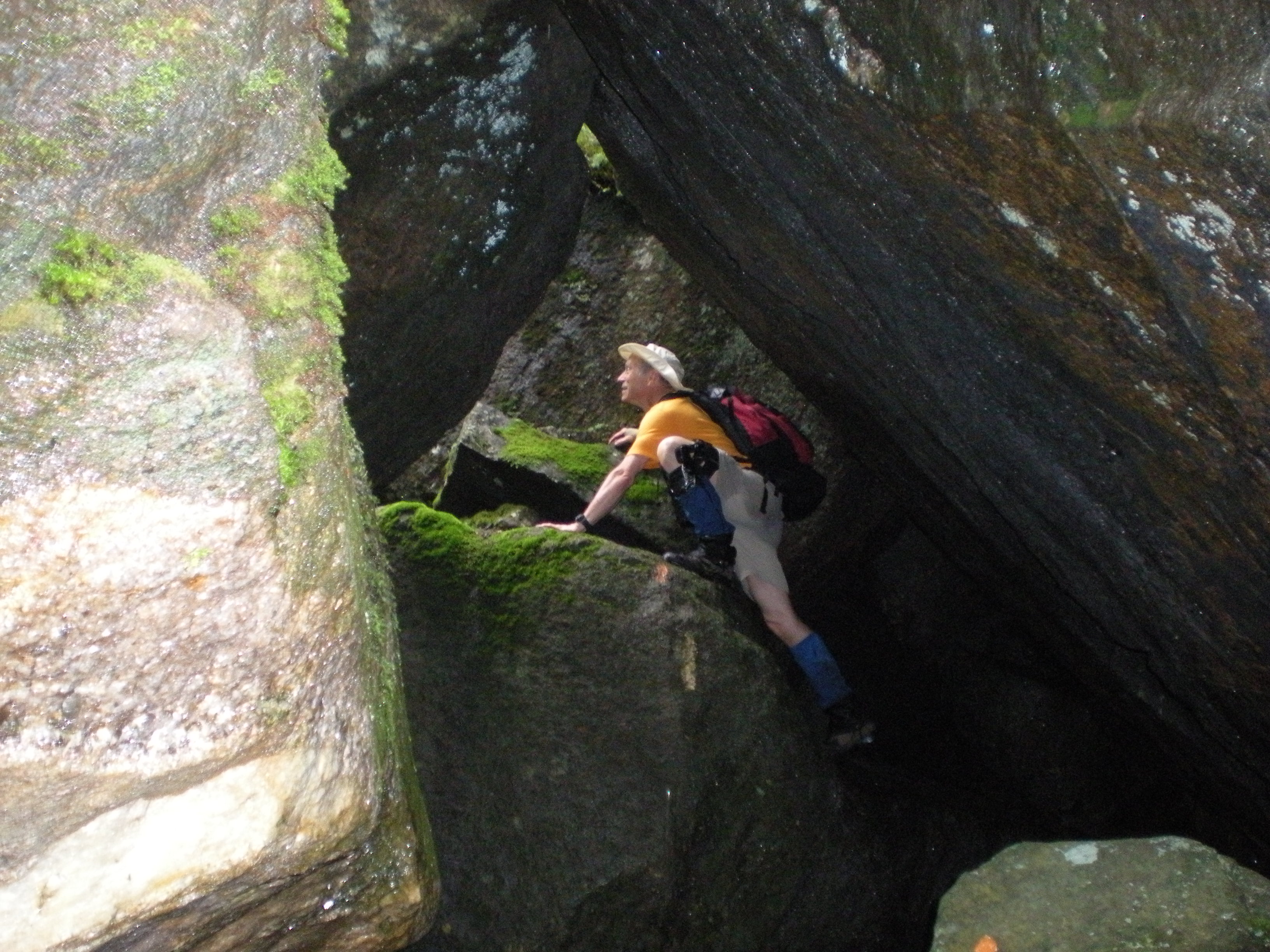 We first wanted to go through the Subway, a side loop on the ravine floor that (as its name implies) takes you through caves, under and above tall boulders, you get the picture. But the entrance to the Subway was a slippery inclined ledge with deep drop-offs on both sides. Peter was game for it, but I said no way - another day when the rocks are dry. So we took the alternate trail up, which was scrambly enough, and met up with the Subway loop at its end. The entrance to the Subway invited us to crawl in (left) - another time on a a dry day. Right above that was the loop through the ice caves (right). By then scrambling had become second nature. 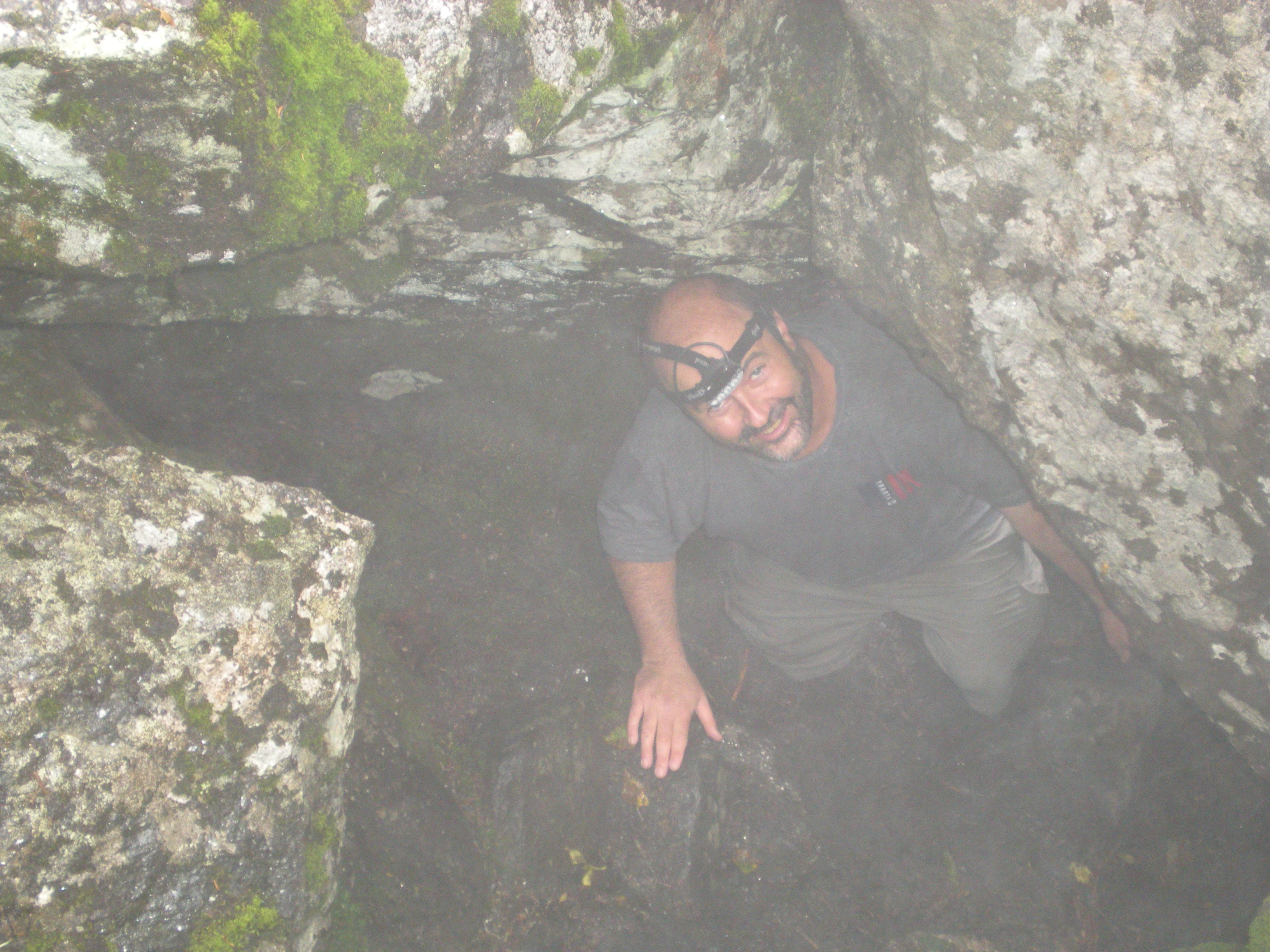 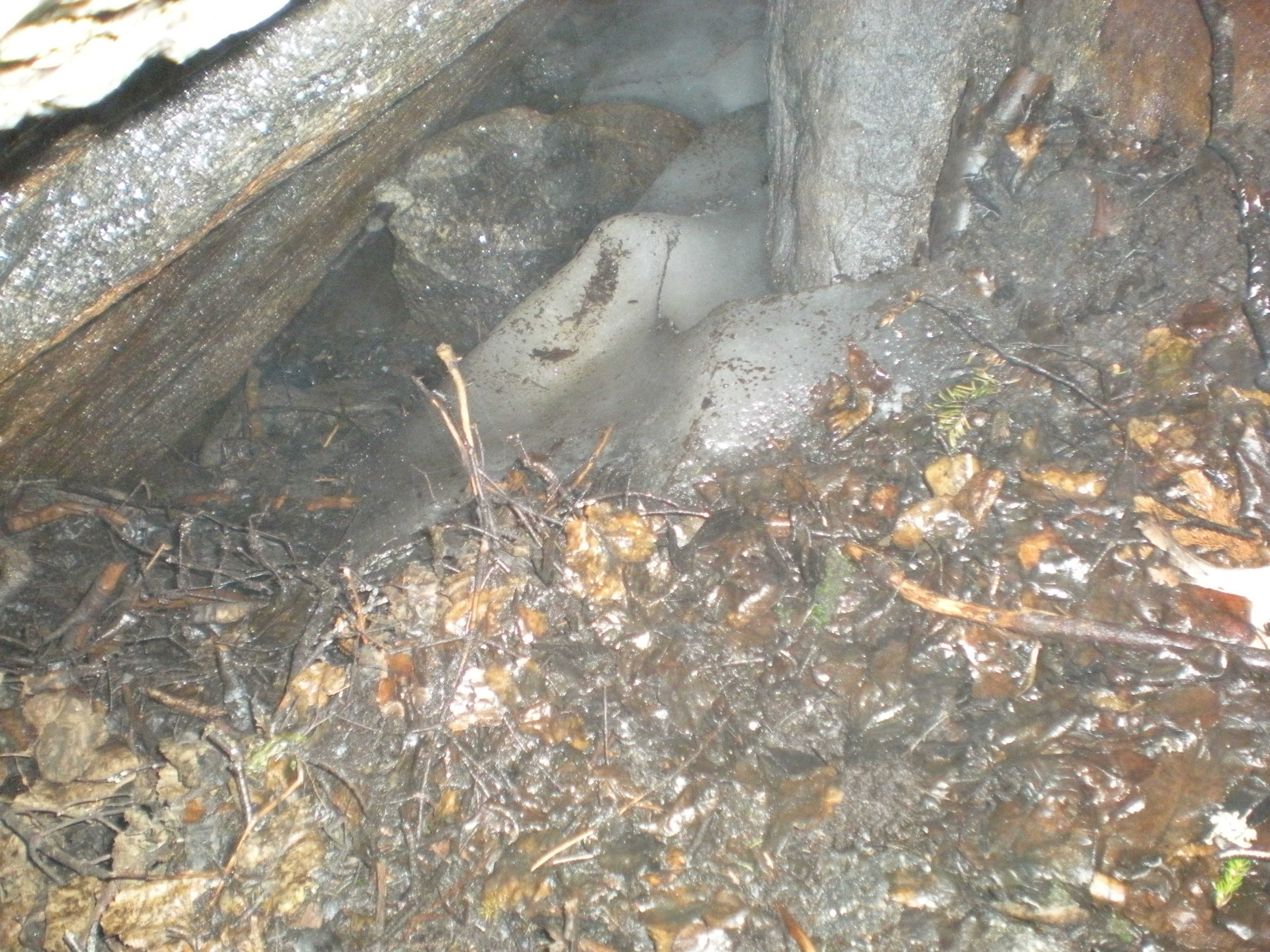 Finding the year-round ice was our quest and some of the caves were deep. so I put on my emergency headlamp (left) and regretted that I didn't have a more powerful torch - something to bring next time. The caves were very cold, in contrast to the warm air outside, and fog formed at the entrance as you can see from the left. Finally our quest was successful and we found slabs of forlorn ice in several of the caves (right). They weren't that much to look at but they were ice all right and certainly weren't going to melt for the rest of the season. 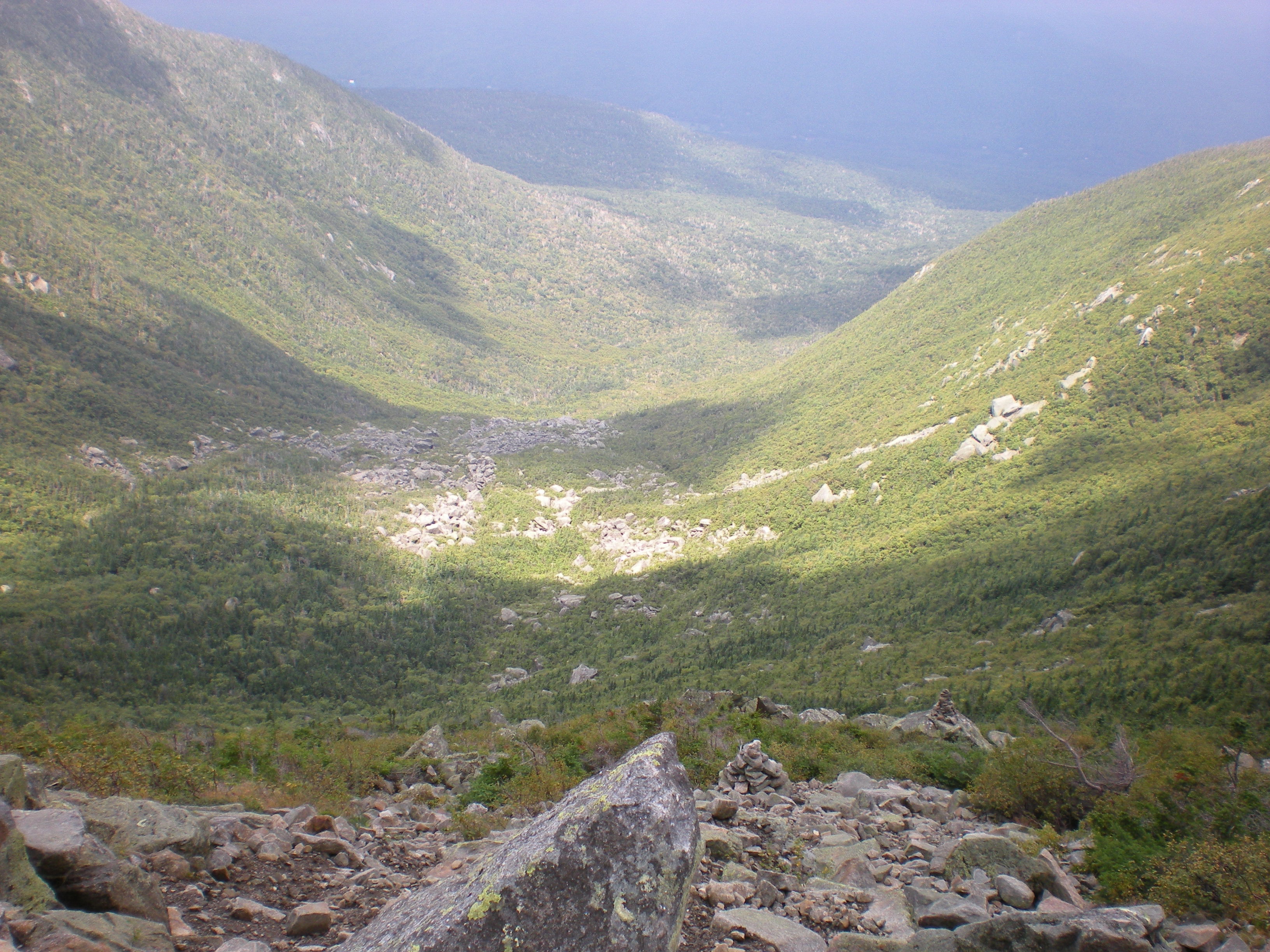 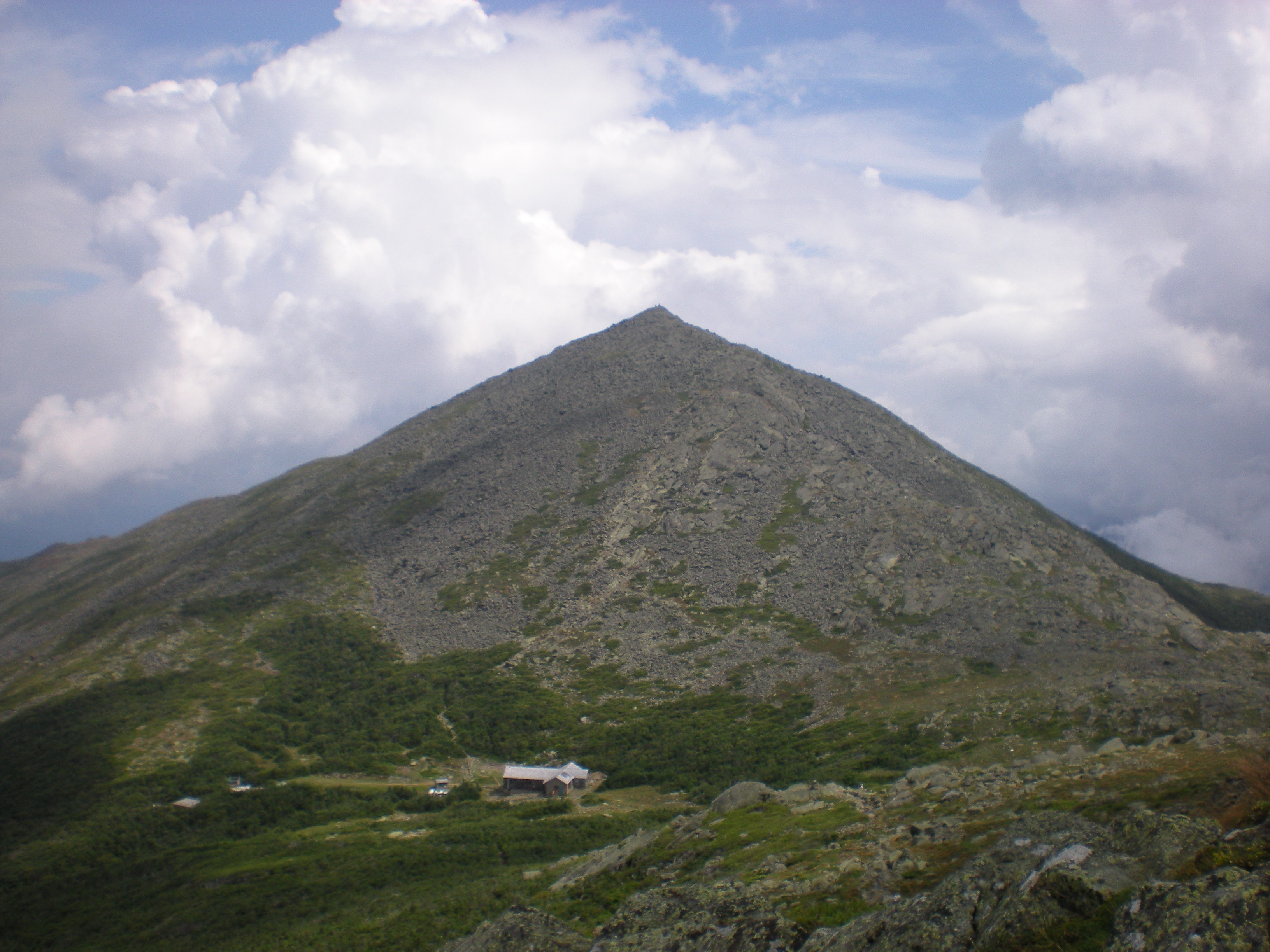 After that came the climb up the ravine headwall. All scramble and very steep, but with beautiful views looking back to the ravine floor and its jumble of rocks (left). As we got out of the ravine at the top of the headwall we were greeted by a postcard view of Mt. Madison and the Hut (right). Since we were in the clear we decided to push up to Mt. Adams, only 0.6 mi. away, but the summit was in and out of cloud and it started to rain hard so we didn't stay along, 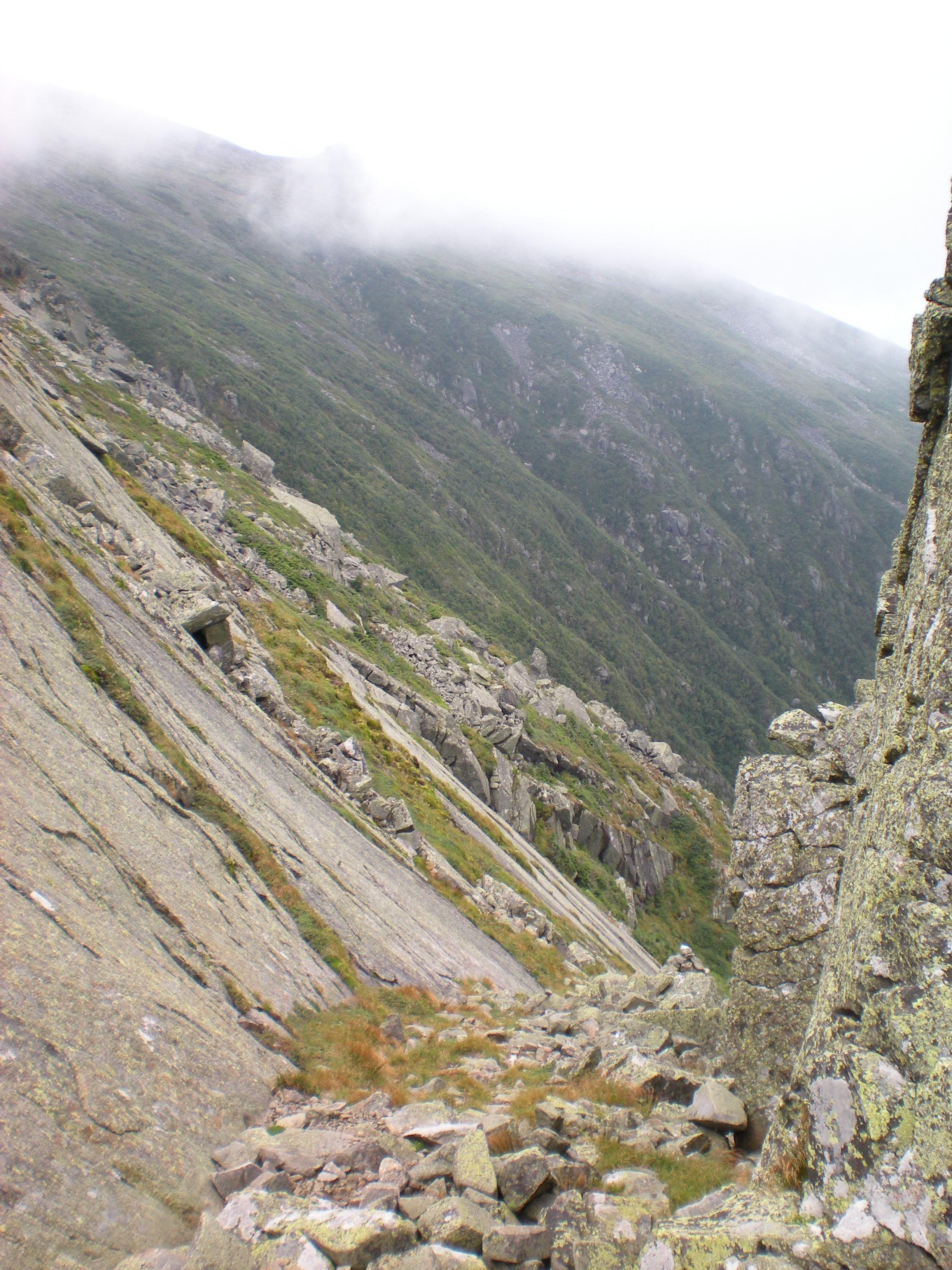 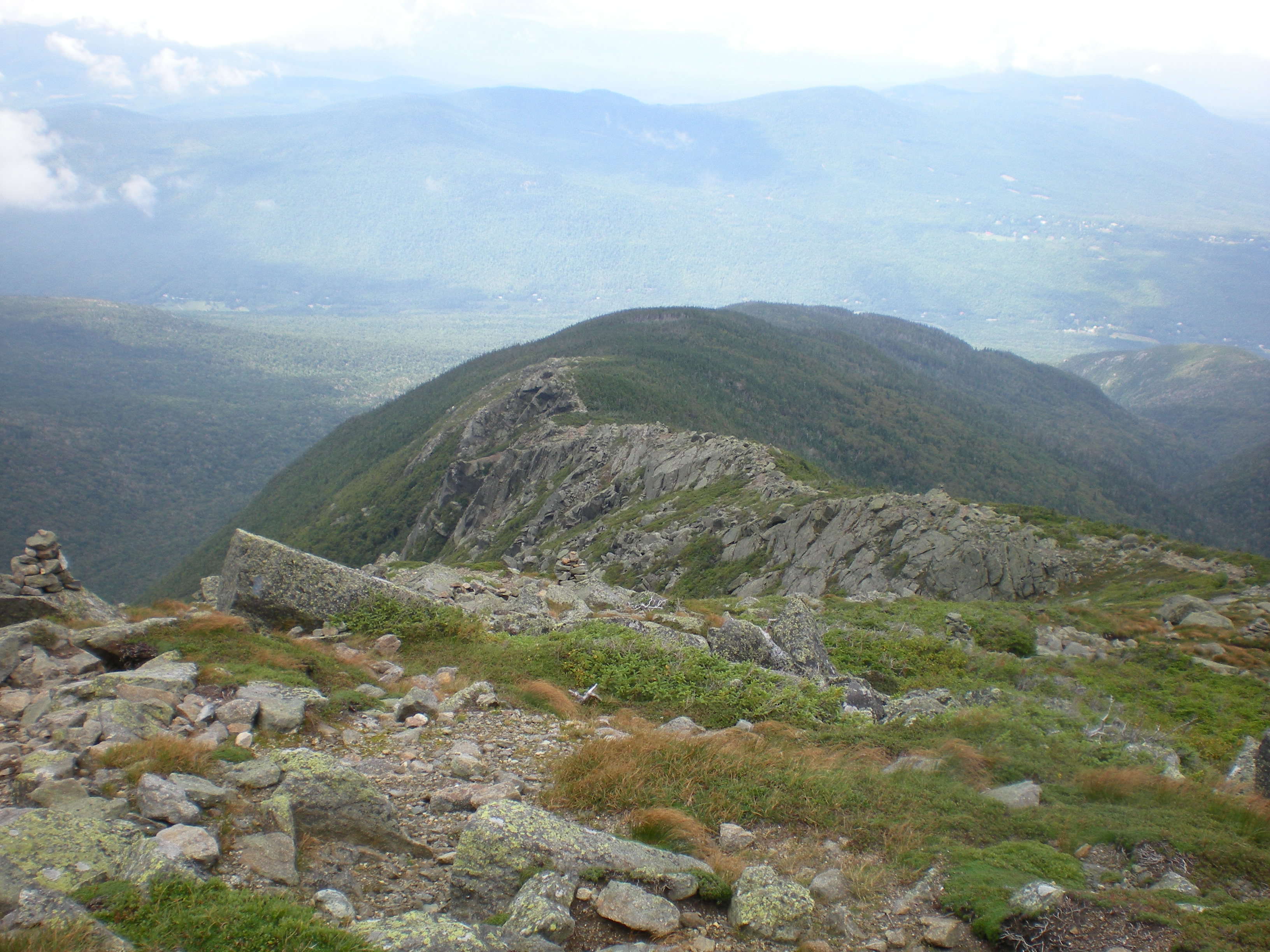 As is often the case, the rain stopped and the clouds cleared as soon as we got off the summit - as if the summits have a spell on them. We passed again by the lip of the King Ravine headwall, which gave a nice perspective of how steep it is (left). We stayed on the Air Line along the Knife Edge (right), with spectacular views of the U-shaped King Ravine to the left and the V-shaped valley to the right. We met a fellow carrying a full-sized harp (!) up to Madison Hut - that's serious committment to music. And from there it was down by the Air Line back to Appalachia. A fabulous hike - I felt it in my legs the next day!