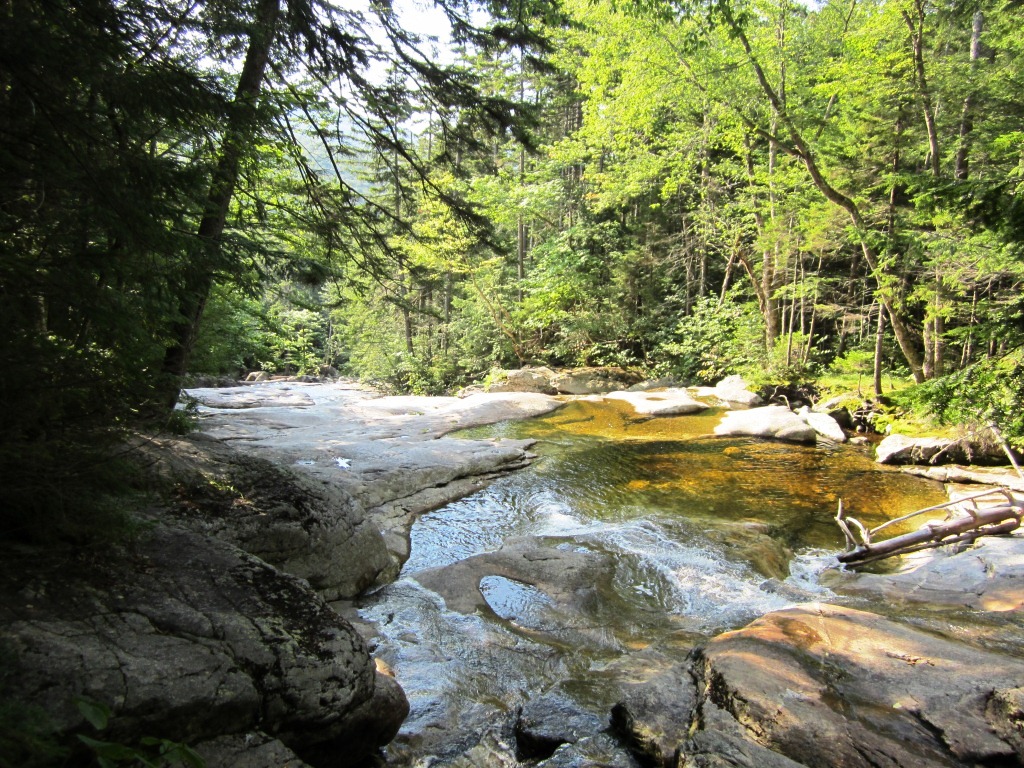 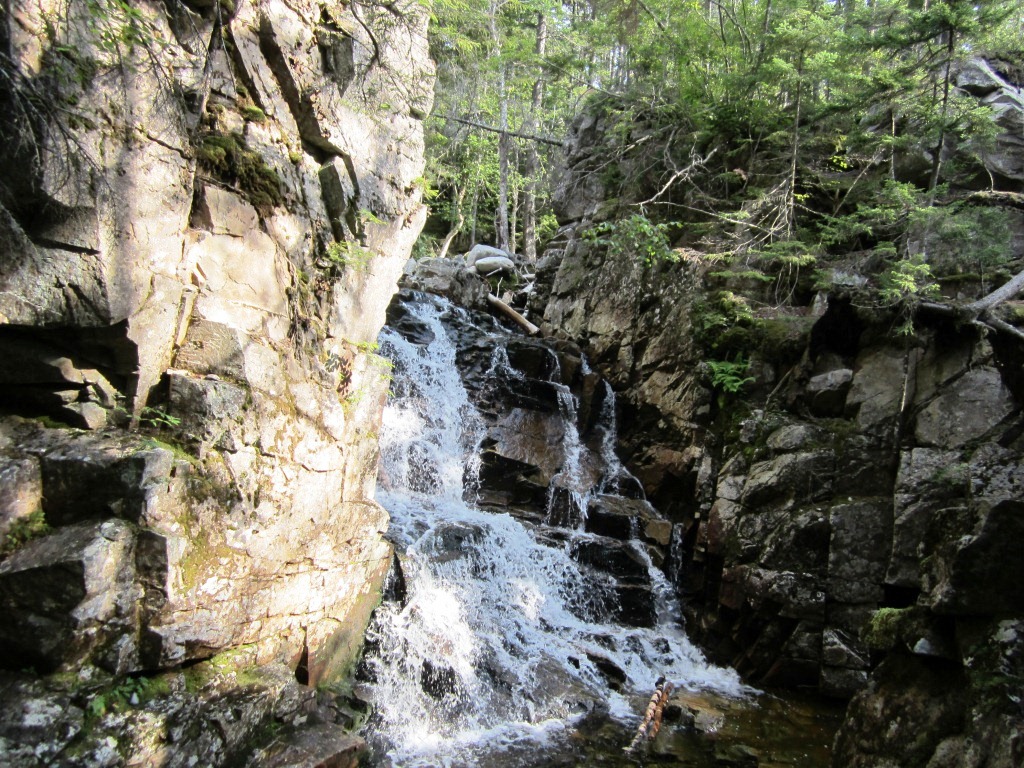 It was going to be a very hot and humid day. A great hike under these conditions is to Kinsman Pond and Lonesome Lake where you get to swim and cool off. Roger Gagne and I started from the Basin up the Basin-Cascades, Cascade Brook, and Kinsman Pond trails. These trails stay along water most of the way, running along broad flat ledges (left) and in small cascades (right). 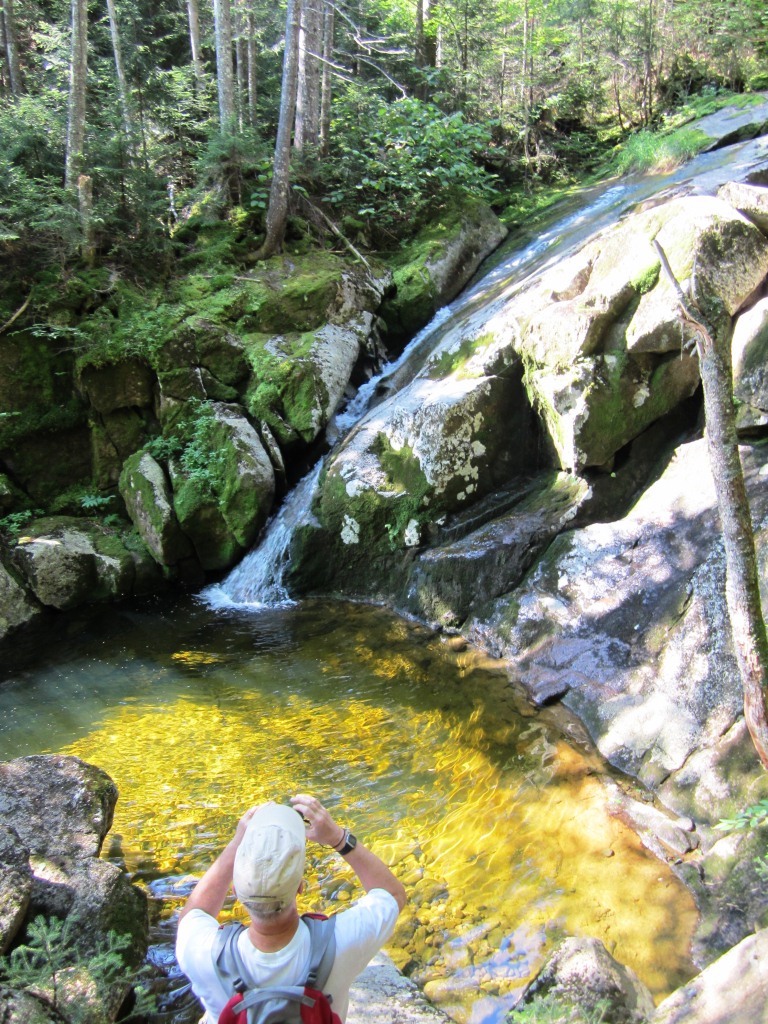 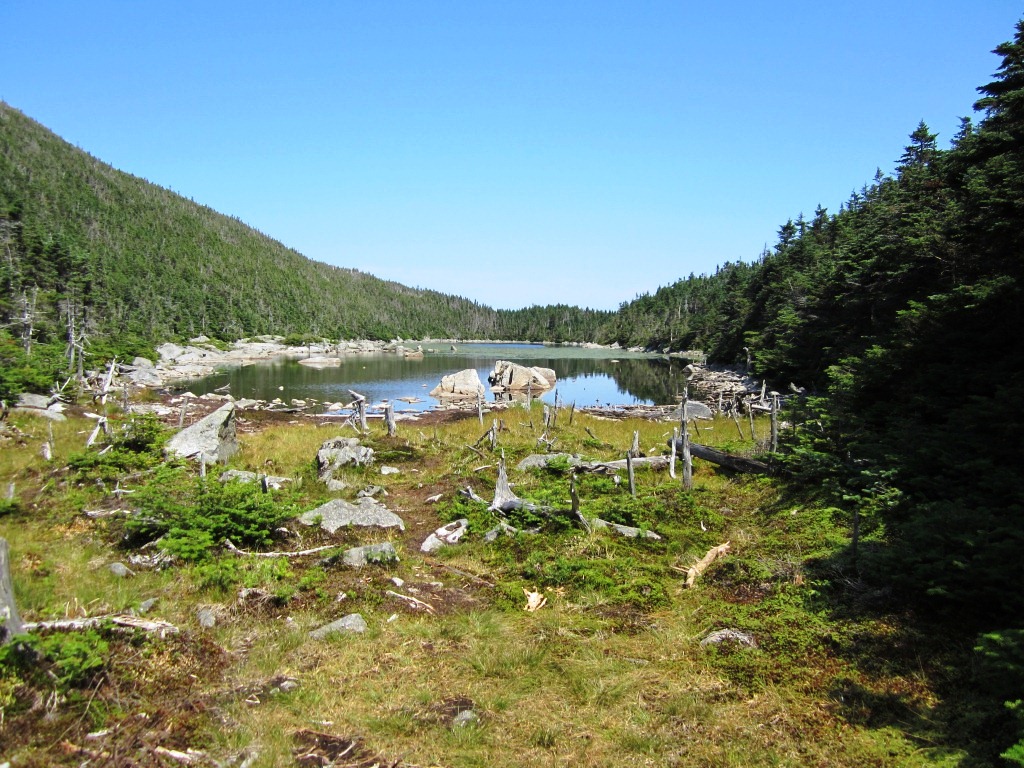 Kinsman Pond Trail is a somewhat out-of-the-way trail requiring care to follow in places. It climbs through changing woods and along a stream - until eventually the stream becomes the trail! Along the way was a beautiful cascade with an inviting pool (left) but I was not yet sufficiently hot to take advantage of it. Finally the trail arrived at the southern end of Kinsman Pond (right). 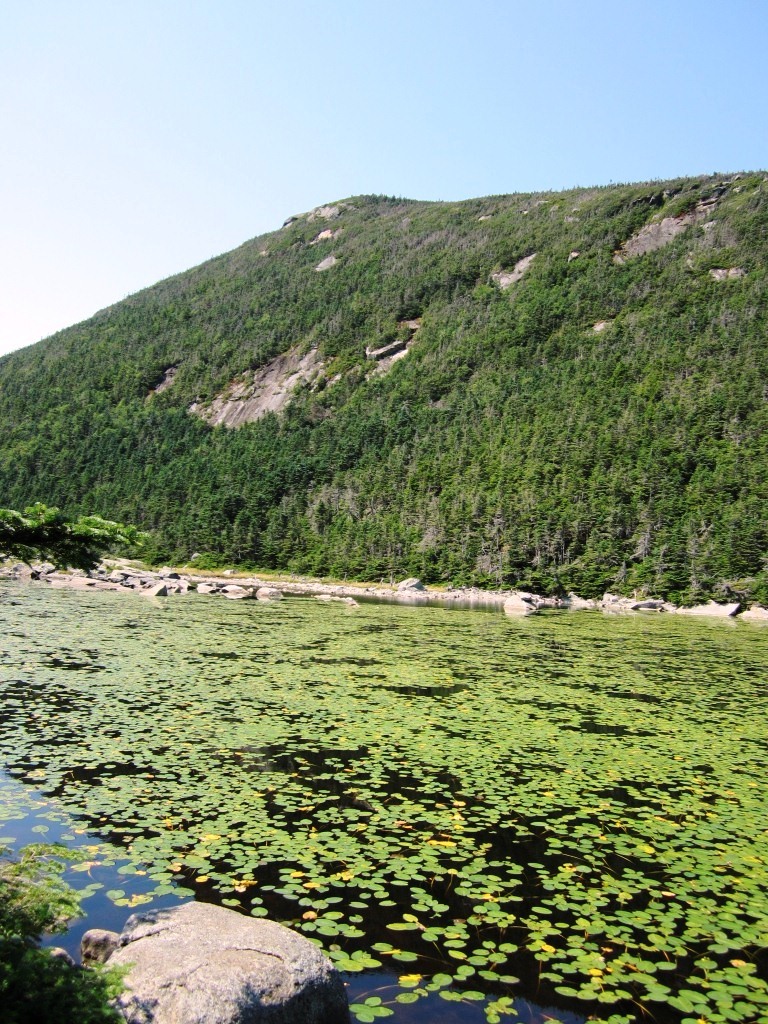 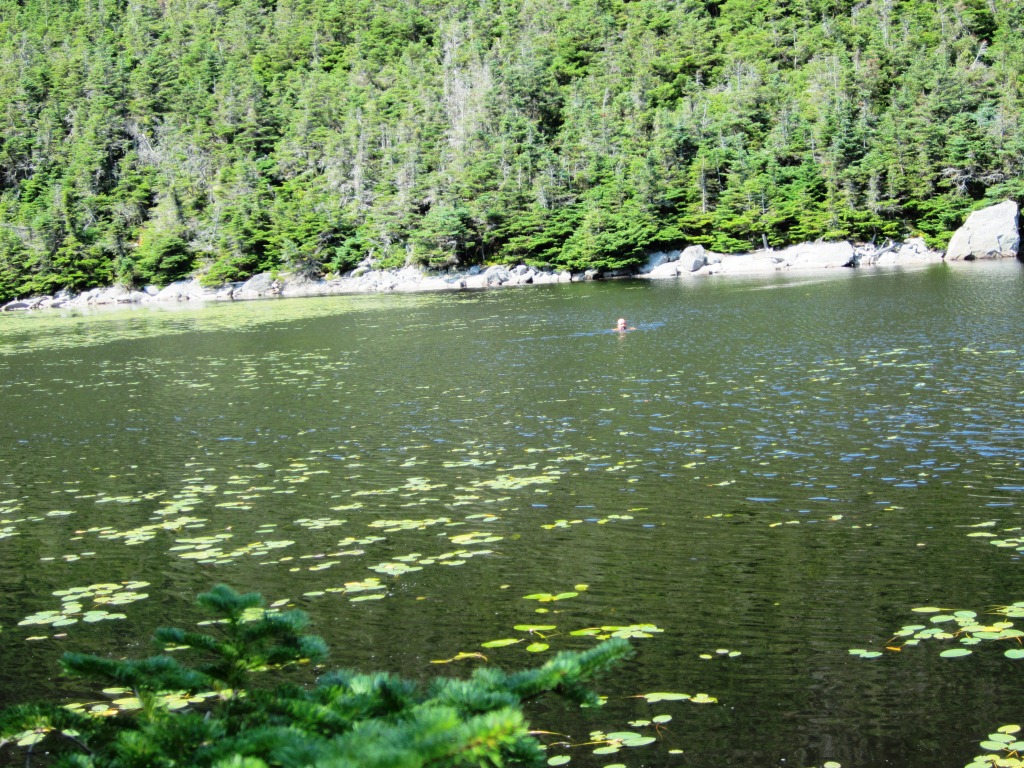 Kinsman Pond has a mountain-pond feel, nestled against the slopes of North Kinsman (left). My last visit there was two years ago, when I had taken the more direct route from Lonesome Lake to climb North and South Kinsman. We hung out for a while on the sunny rocks and I took my swim (right). It was wonderful. The pond is deep and wide and fun to explore. The water was very warm at the surface, cold at depth. It may look from the pictures that I was tangled in water lilies but that's not the case at all - most of the pond was wide open. 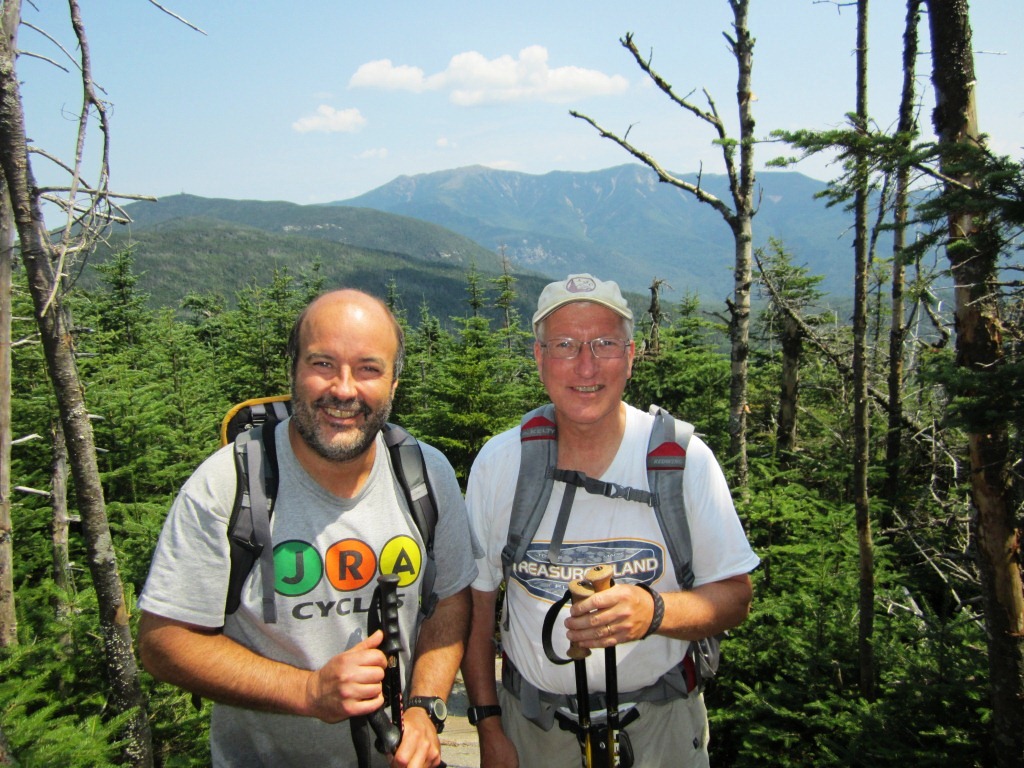 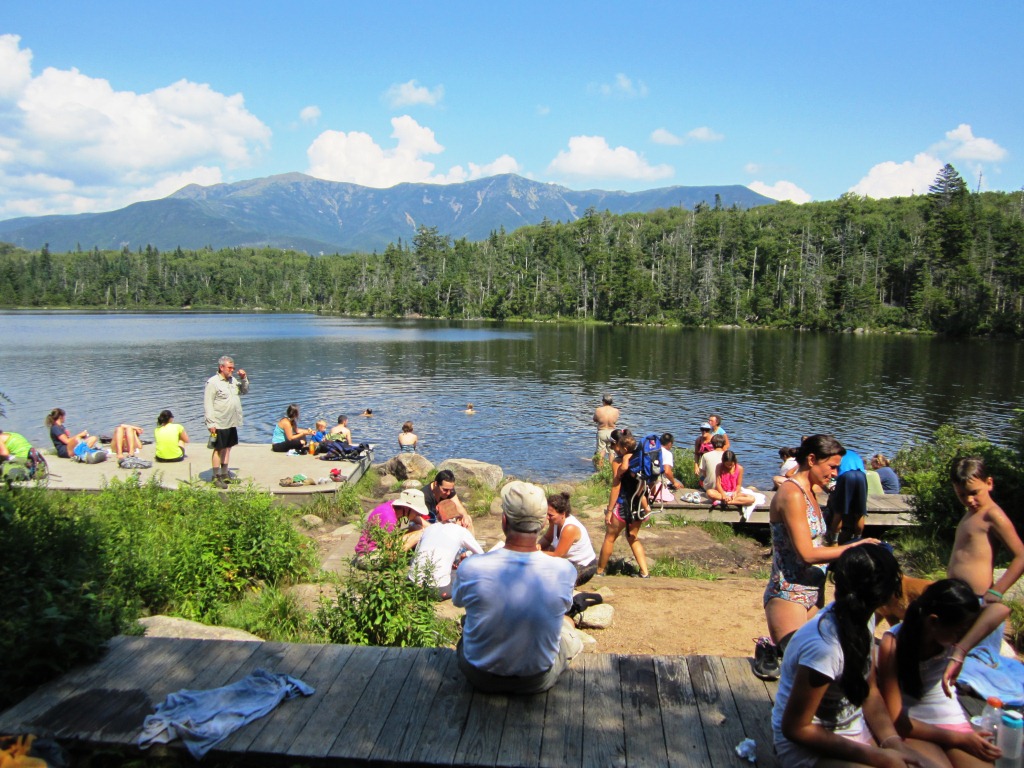 After that we continued along to pond to the shelter and from there down the Fishin' Jimmy Trail which is part of the Appalachian Trail. We had hardly seen anyone until then but now we saw quite a few people. The trail offers some views towards Cannon Mountain and the Franconia Ridge (left) before going down steeply to Lonesome Lake. We didn't expect to be alone at Lonesome Lake because there's an AMC Hut and it's a 90-min hike from the Franconia Notch campground and what else are you going to do on such a hot day. But I had never seen it so crowded, it was a beach scene (right). And another great swim. 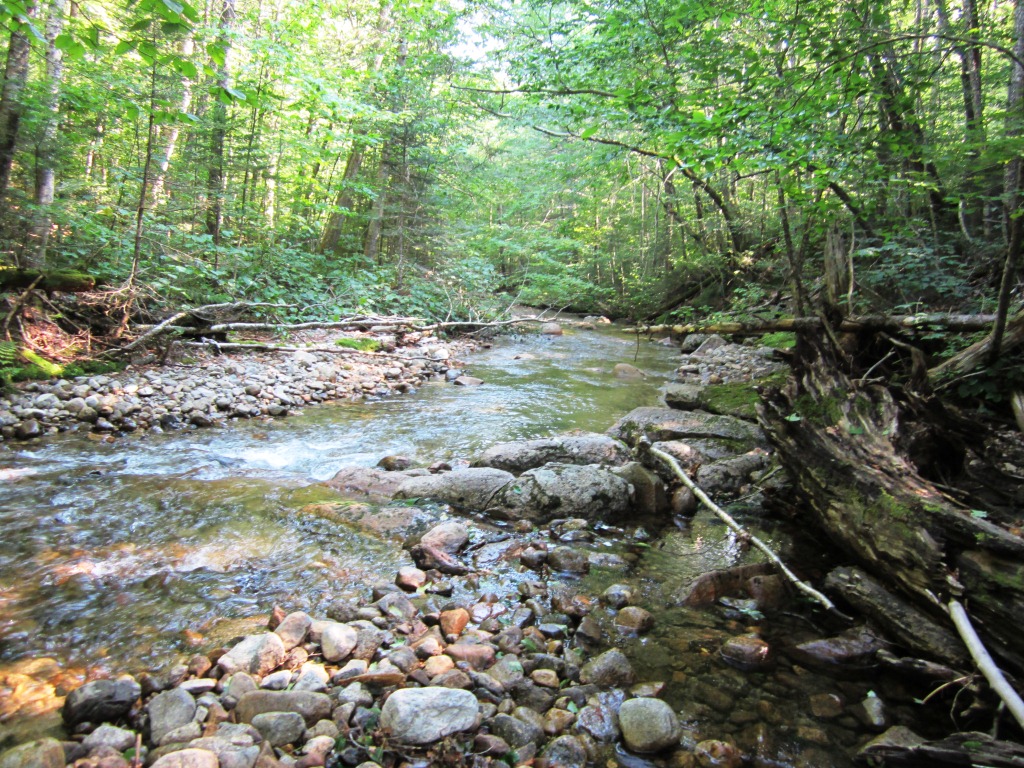 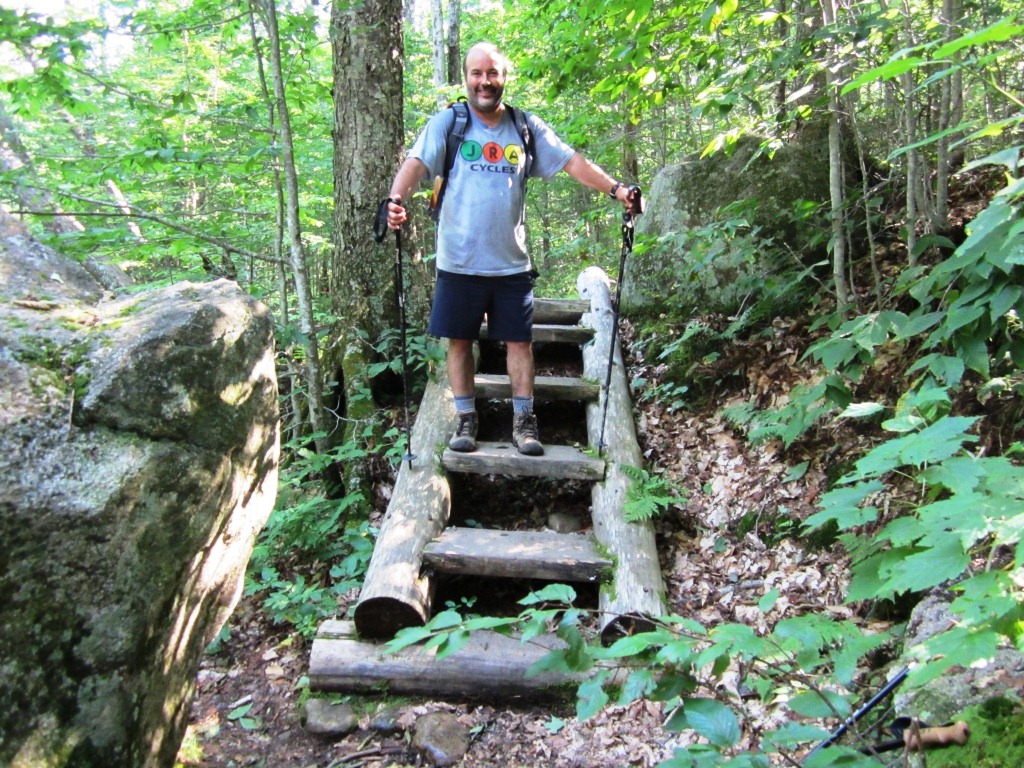 From there we went down the Lonesome Lake Trail to the campground, and on the Pemi Trail back to the Basin. The Pemi Trail follows the headwaters of the Pemigewasset River, which is little more than a stream at that point (left). From its location one might expect that trail to be a boulevard, but in fact we hardly saw anyone. On the other side of the river was a bike path and then the highway, but for much of the way we couldn't hear or see either. It was a nice and unassuming trail, even with an incongruous ladder (right) that seemed to serve no purpose at all.