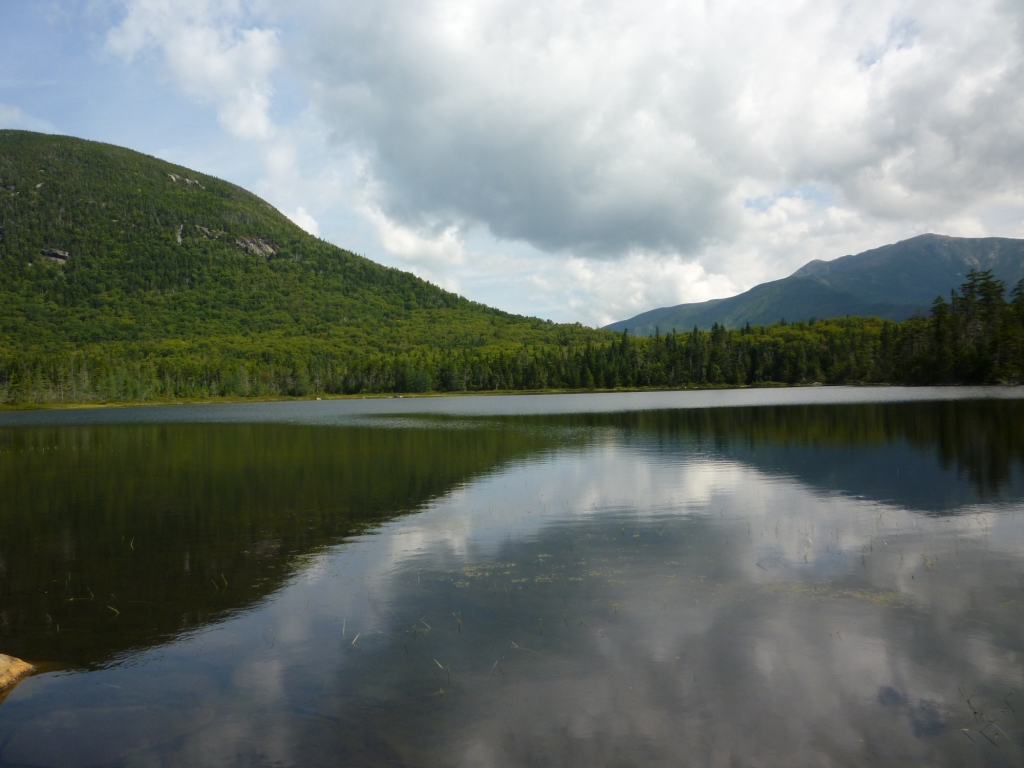 It was going to be warm that day so my son Alex and I went off to do N and S Kinsman, a trip that has the big advantage of going by two lakes to jump in and cool off. The hike starts in Lafayette Place campground, which was a zoo on this nice Saturday, and up Lonesome Lake Trail which is a favorite for families with small kids. It was wonderful to see the next generation of hikers tramping enthusiastically up the trail. Lonesome Lake is indeed very nice, with a dock for swimming, an AMC hut, and beautiful views of the Franconia Ridge (left). 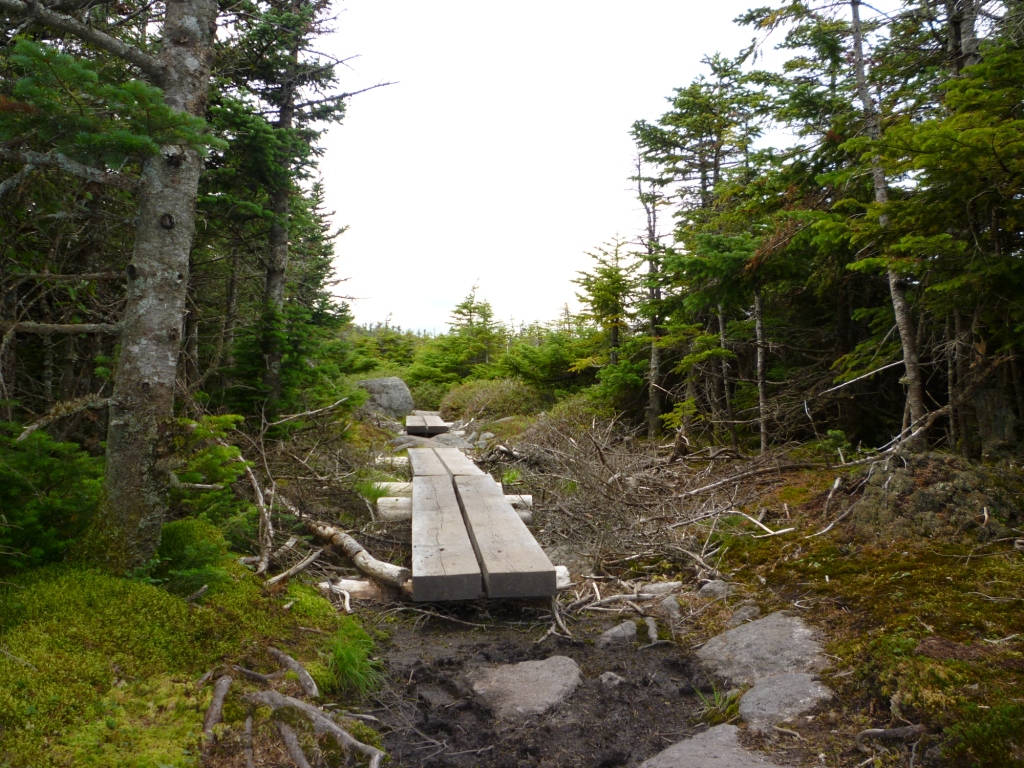 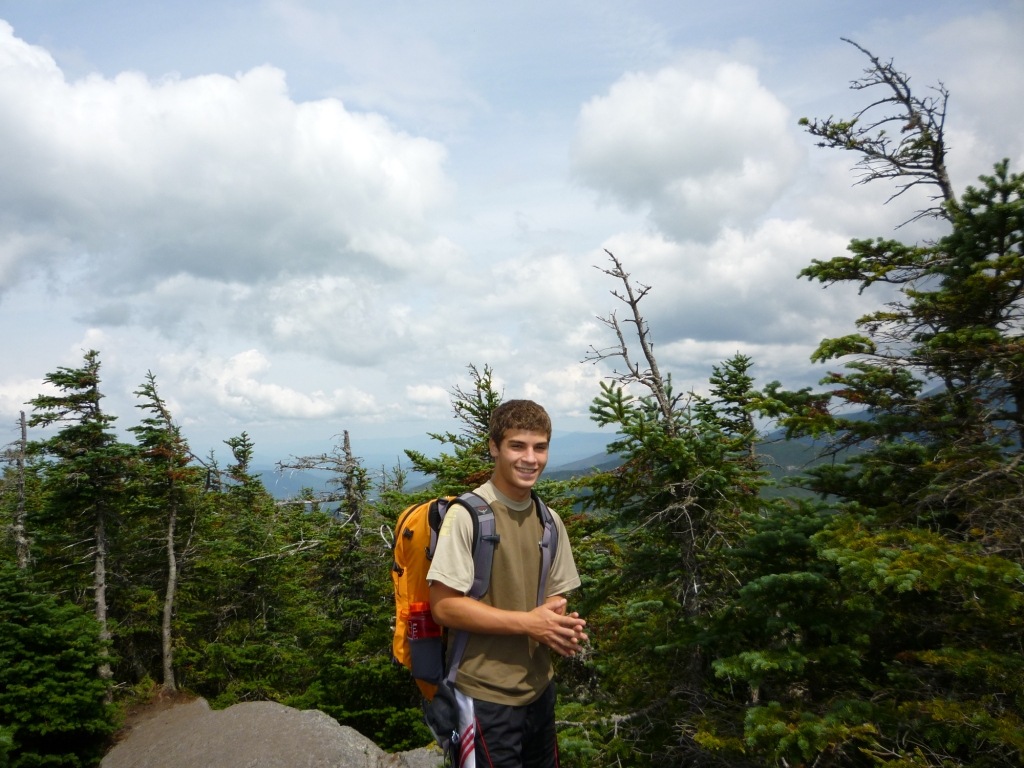 From Lonesome Lake we took the Fishin' Jimmy Trail up to Kinsman Ridge and left the crowds behind. This is part of the Appalachian Trail (AT) and we crossed a few thru-hikers recognizable by their pack, their beard, and their gaze. The trail is very steep in its second half but remarkably well built with rock steps, extensive bog bridges, and most singularly "creosote steps" of wood bolted onto the ledge (top right). I believe these were built in the 1930s and are not being replaced when the log eventually rots (we same some ex-steps as scars in the rock). The only other place I have seen these creosote steps is the Beaver Brook Trail up Moosilauke. Finally we got on the Kinsman ridge and took the Kinsman Ridge trail, another well-built trail with nice bog bridges (left), and got to the top of N. Kinsman at 4,300' (right). 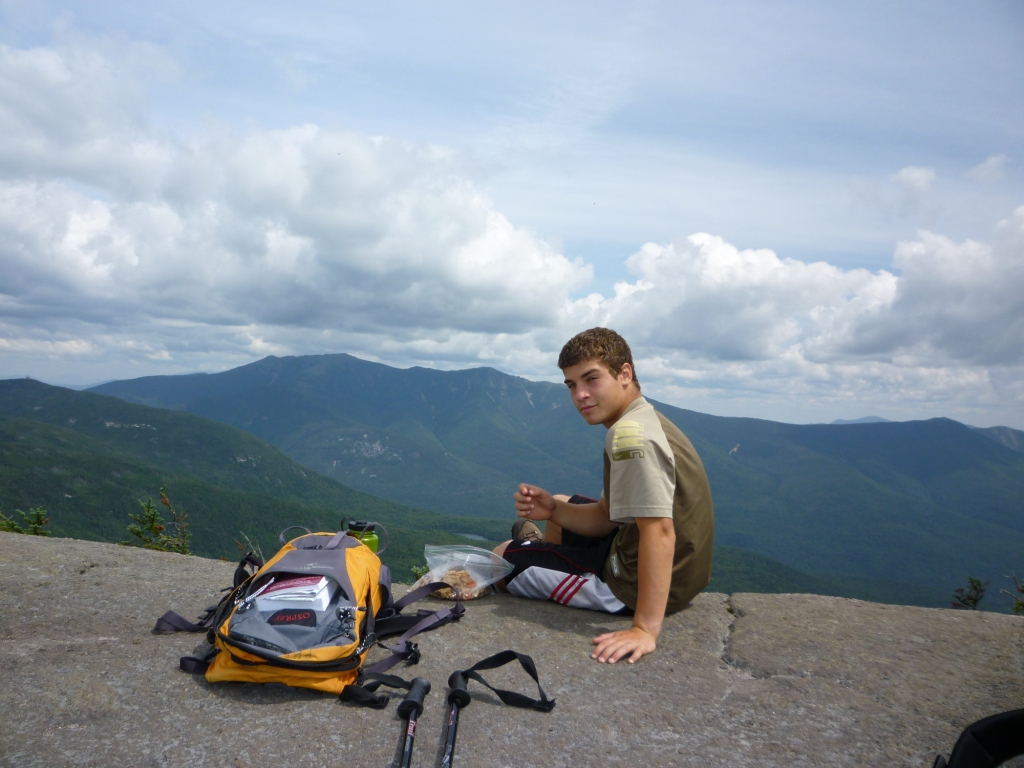 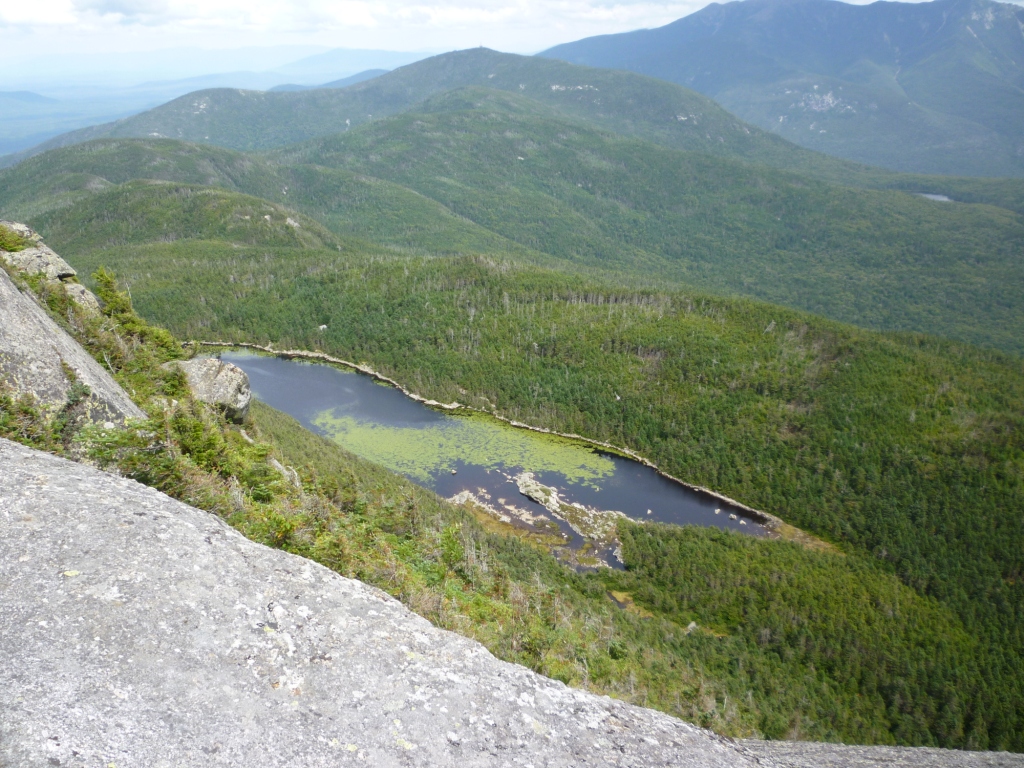 There's not much of a view from N. Kinsman itself, as you see from the above picture, but there are two big ledges just off the top that offer expansive views of the Franconia Ridge to the east (left), and of the mountains to the north and south. Peering from the ledge you can see Kinsman Pond just below (right). Here Cannon Mountain is at the top center of the picture, Lonesome Lake is to the right, and Franconia Ridge is top right. 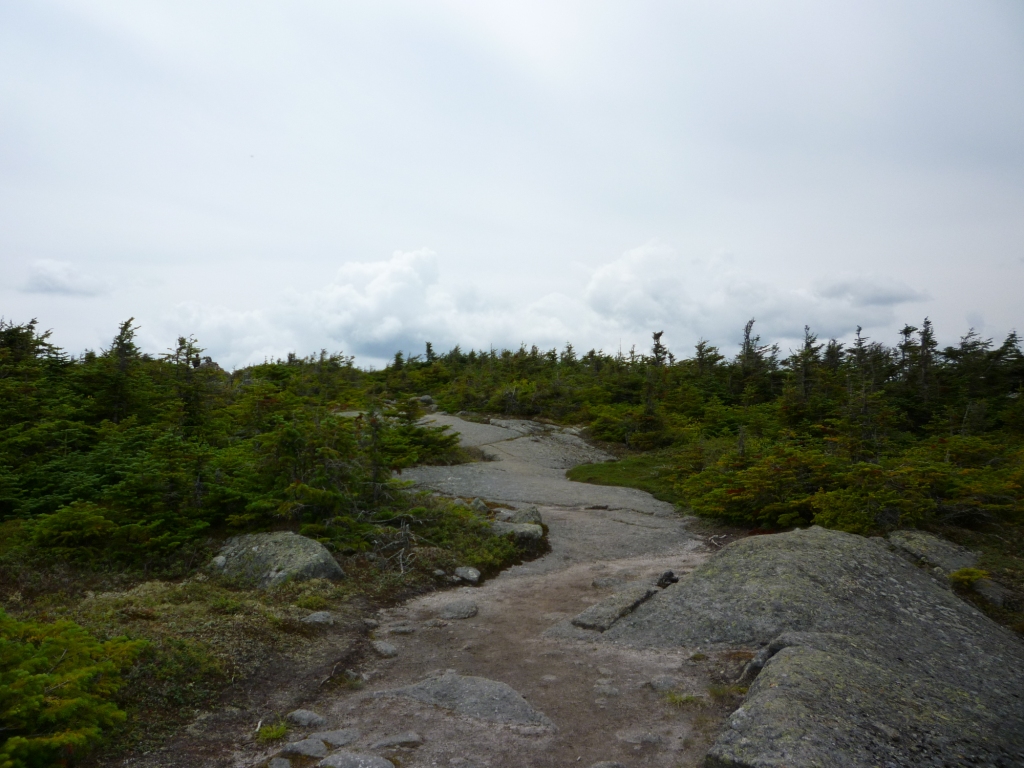 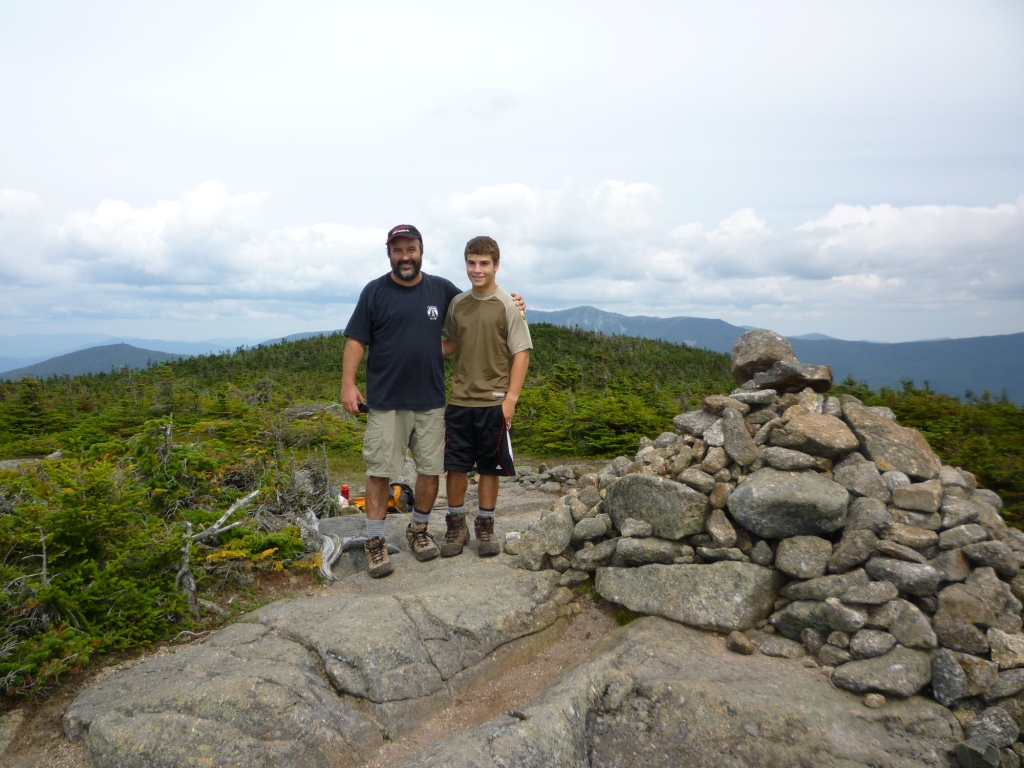 We then proceeded to S. Kinsman, which involves descending 300' to a col and then back up to about the same altitude as N. Kinsman. Again a steep but well-built trail, perhaps because this is the AT. Approaching the top of S. Kinsman was some nice ledgy terrain (left). We found someone to take our picture at the top (right) and this was Alex's 34th 4000-footer - 14 to go in his quest to do them all! 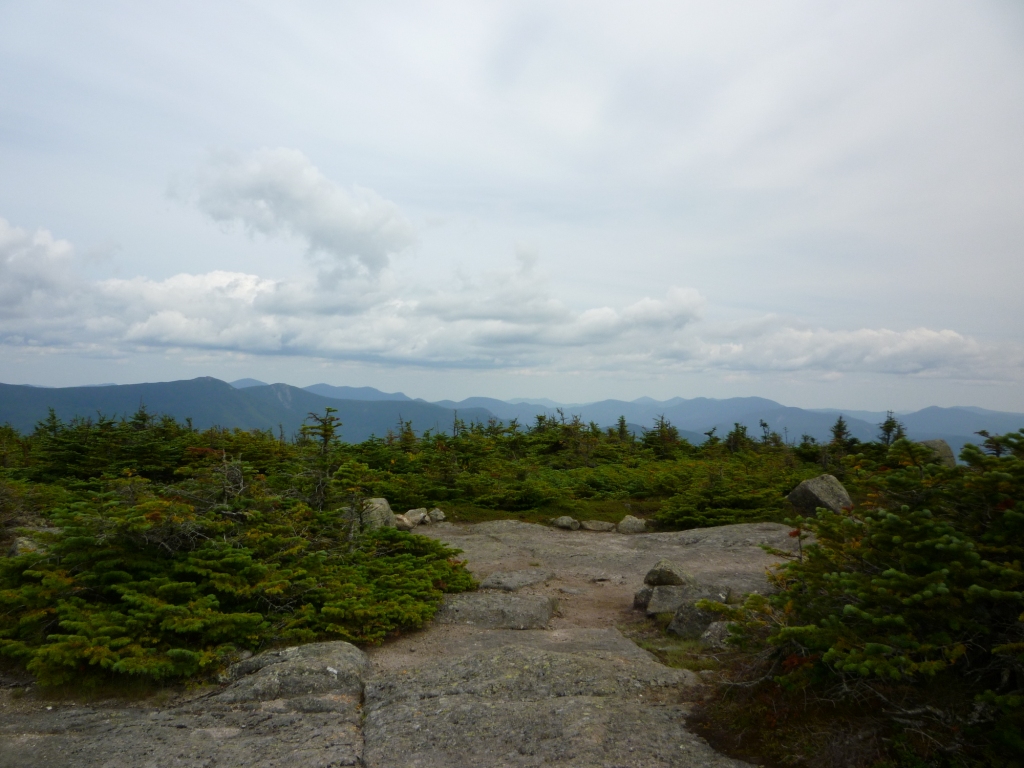 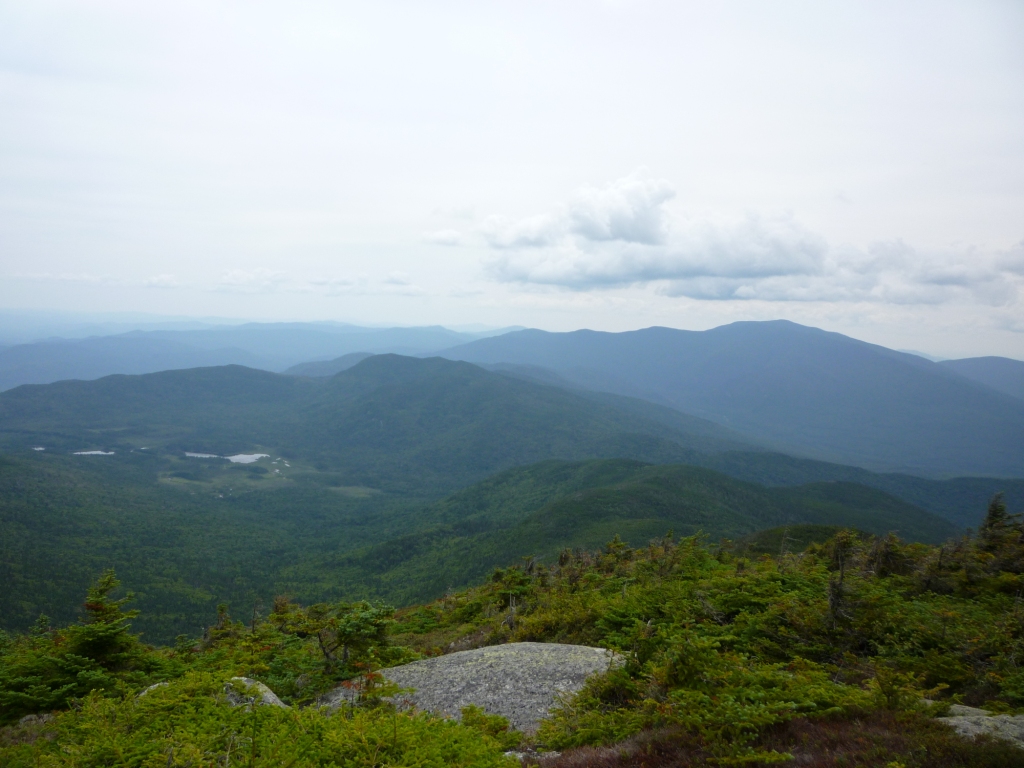 S. Kinsman is a very nice mountaintop - although it's not above treeline, its scrubby vegetation allows for views in all directions, and the top is large and flat so you can wander around to take in the views which include many of the western summits of the Whites (left). I was particularly struck by the unique view to the south of Harrington Pond and Moosilauke (right) and took this opportunity for a portrait of Alex with Harrington Pond in the background (bottom left). As I tell him to his mild annoyance, he is my favorite subject! 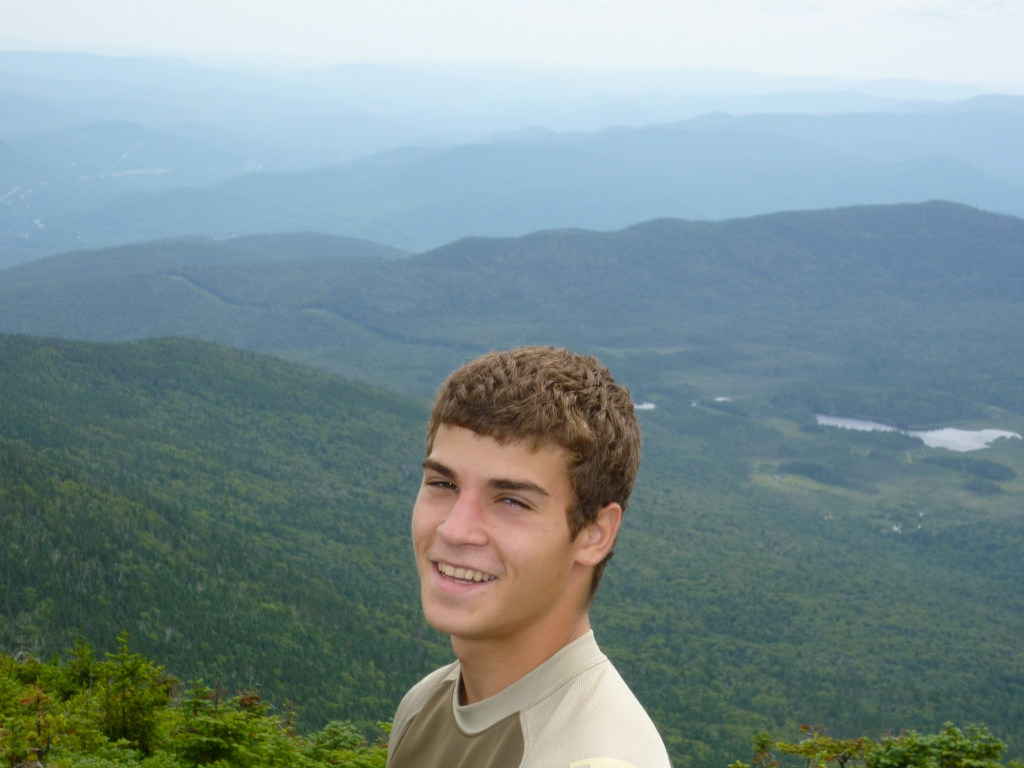 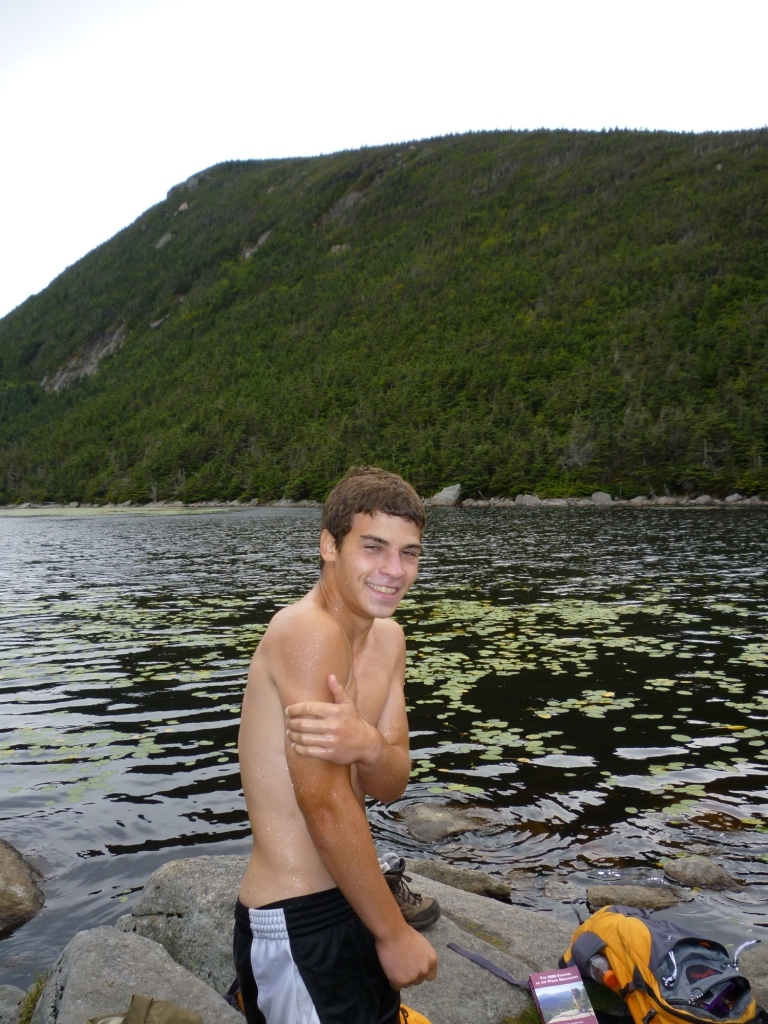 After that it was return down the way we came, with swimming stops in Kinsman Pond and Lonesome Lake. Here's Alex coming out of his swim at Kinsman Pond (right) - a truly beautiful place ringed by mountains. There's a campsite there with a brand new shelter (built by the AMC in 2007) and I was very pleased to see this. It is with regret that I see shelters torn down in wilderness areas - they make nice destinations, and the concern about they taking away from the wilderness experience is just plain silly. That's up there with removing trail signs and blazes in wilderness areas to enhance the "wilderness experience" - is the goal to get lost? Someone in the Forest Service needs to get a grip.