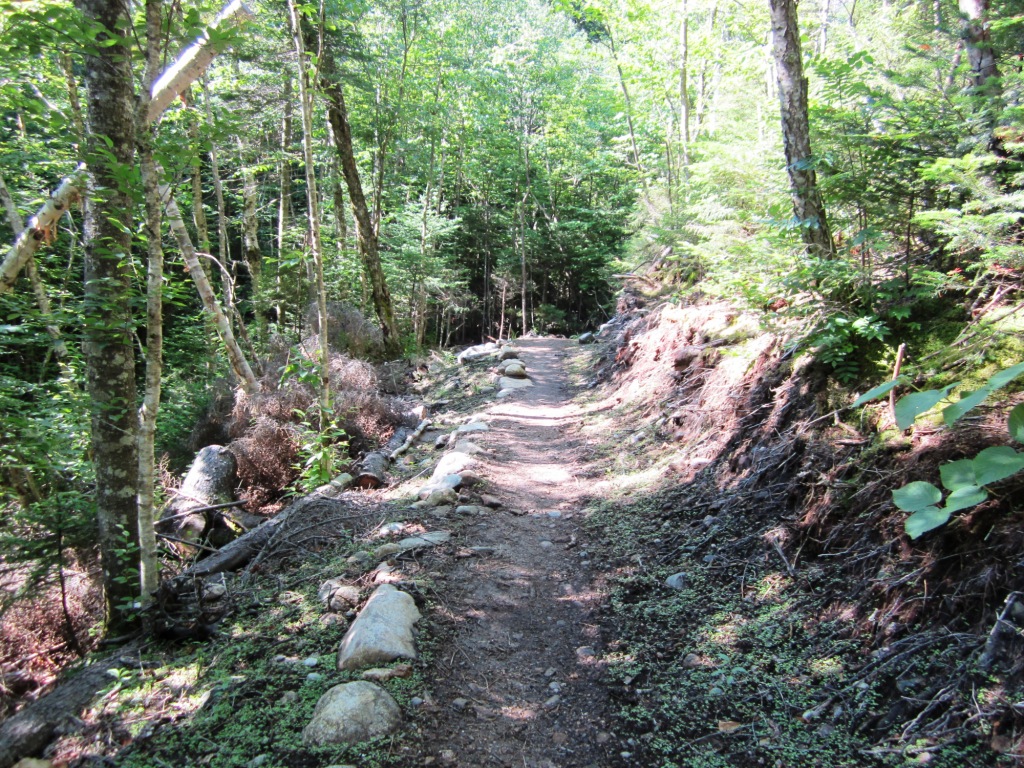 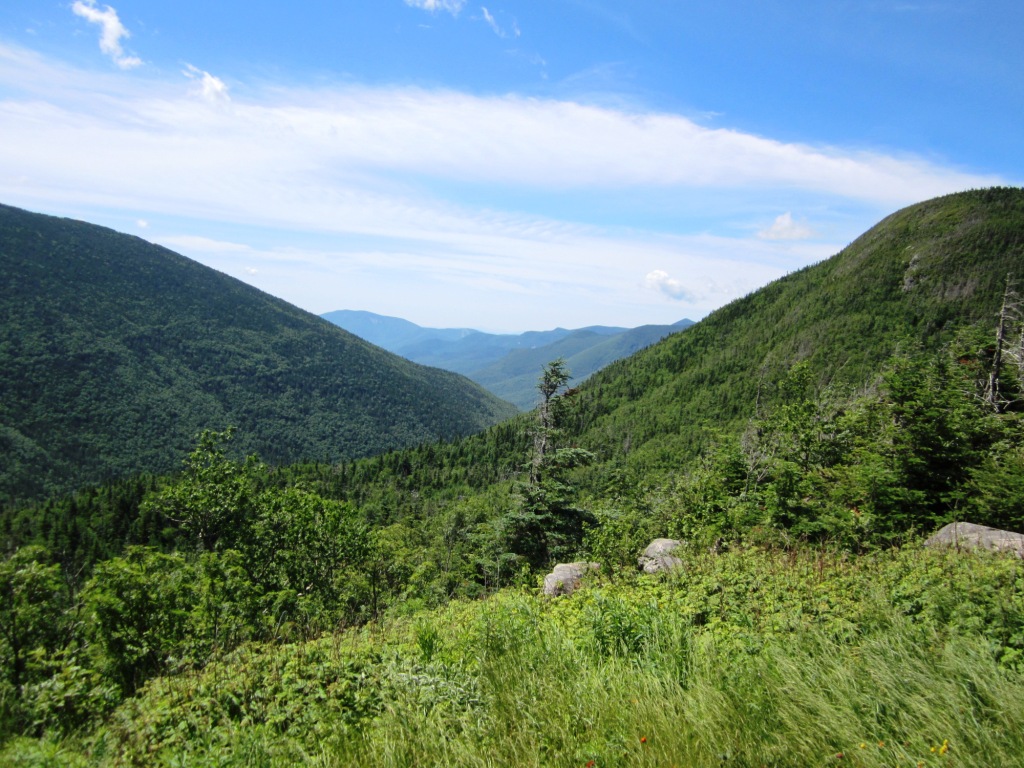 The Twins (North Twin, 4,900' and South Twin, 4,800') are right in my backyard but I hadn't climbed them in years. Roger Gagne and I did the loop up the Gale River Trail to Galehead Hut, over both Twins, and down the North Twin Trail, where we had spotted a car at the trailhead. The climb began along the Gale River on an old logging road. After an hour or so a USFS sign asking "What's going on here?" informed us that the trail had been re-routed away from the river a year ago because of concern over erosion. And so we enjoyed a mile or so of brand new trail, with some great trailwork (left) and none of the rockiness that you find on old eroded trails. Eventually the trail returned to the river for the steep climb to Galehead Hut. From the hut we had nice views down the valley to the south (right). 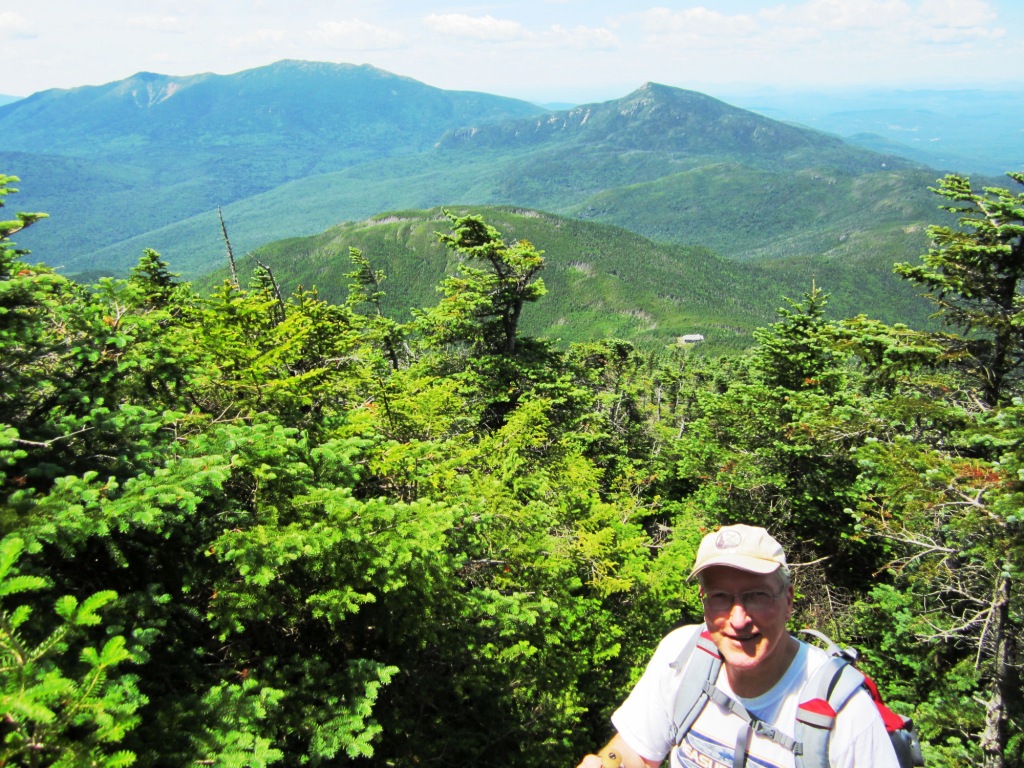 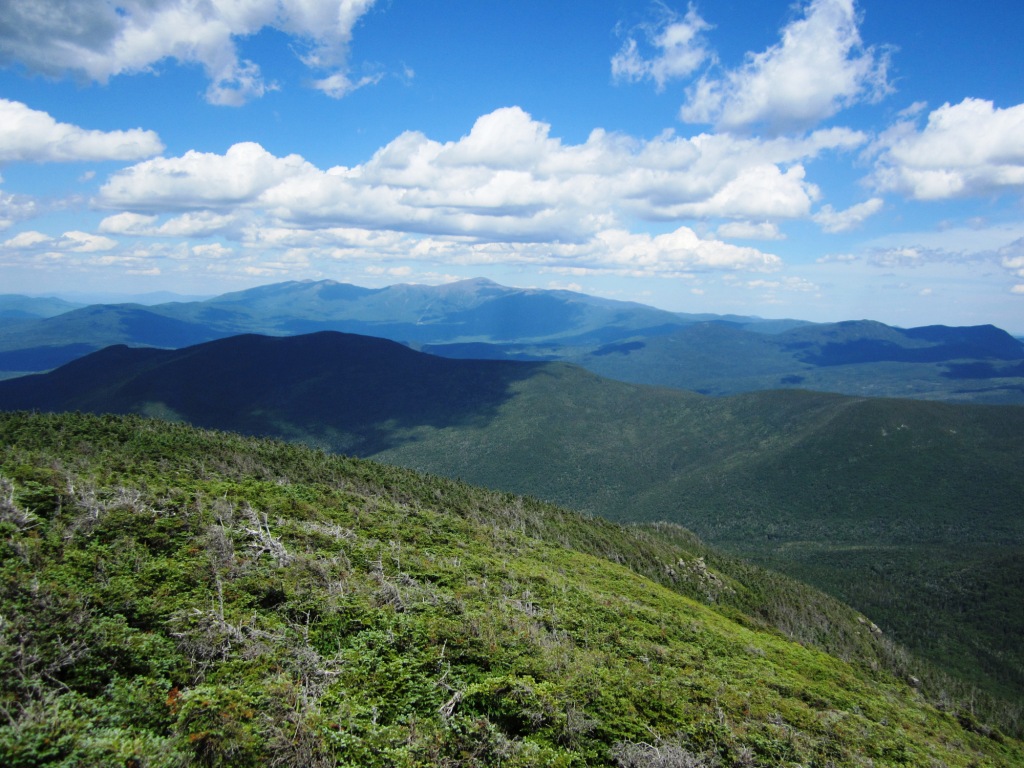 The hut had the usual small bustle of people stopping by and going in different directions. We set off on the Twinway, part of the Appalachian Trail, which climbs 1,100 feet in just 0.8 miles on its way to South Twin. This is not the steepest part of the AT - that prize goes to the Beaver Brook Trail, which I had done last year to climb Moosilauke. Still it's pretty steep. As we got close to the top the views opened up to the south with a nice panorama of Mt. Garfield and the Franconia Ridge with Galehead Hut down below (left). 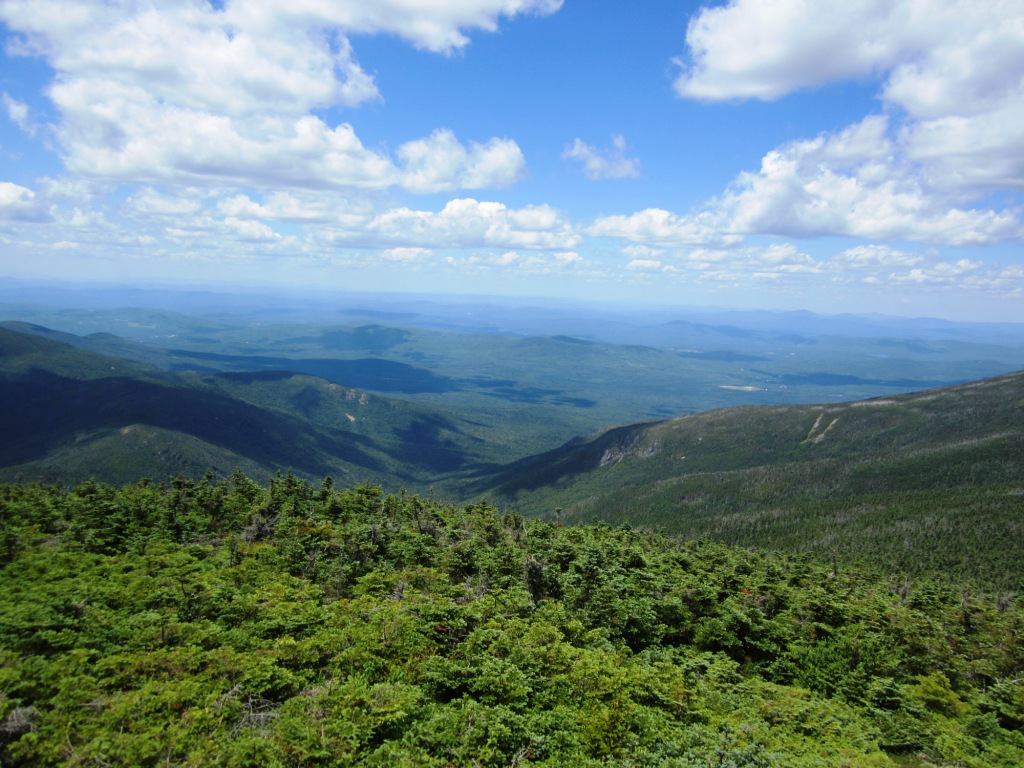 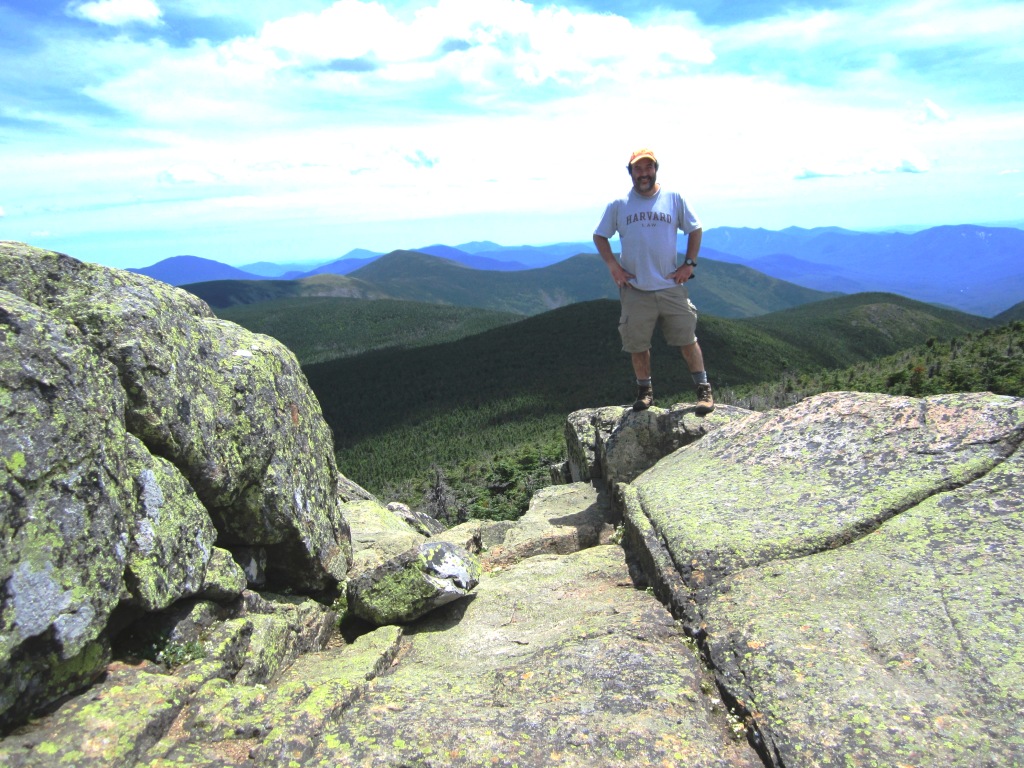 We thus reached the top of South Twin, which despite its height does not manage to get above treeline. This is unusual - in the Presidentials, 4,500' is generally enough to get you above treeline or at least in low scrub. Here, thick spruce blanketed the slopes all the way to the top. This spruce cover was noted by the 19th-century explorers (no trails) as making the Twins very difficult to climb - they recommended crawling under the spruce! These guys were tough. In any case, thanks to a rock outcropping the top is bare with a 360o view. There's not a lot to say about the views except that they are magnificent. Here they are looking north (top right), west (left), east (right), and south (below left). I was particularly pleased to distinguish Ethan Pond and Norcross Pond in the view to the east. I don't think that there are other places from which I've seen Norcross Pond, a beautiful place to visit. 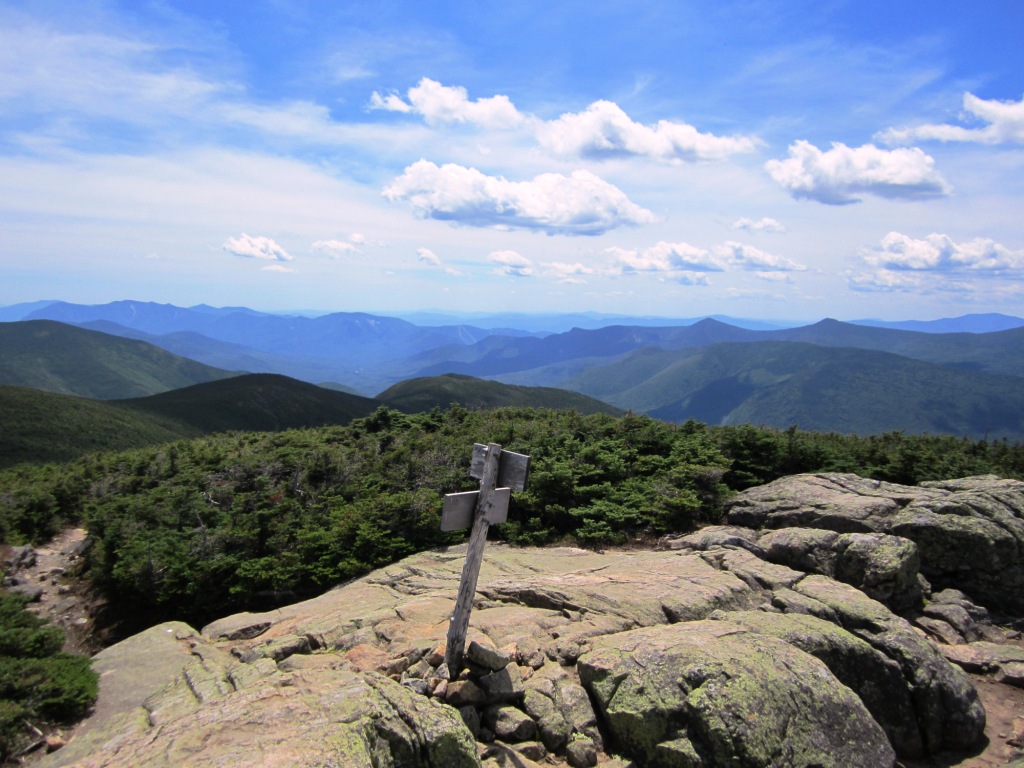 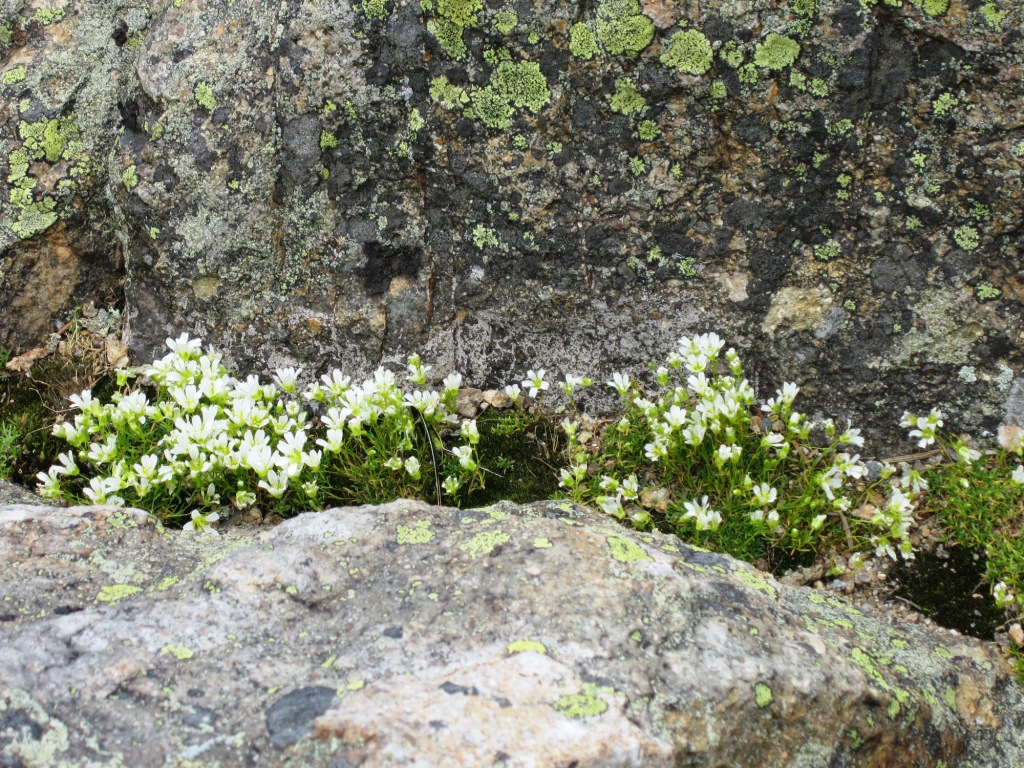 There are many, many places in the Whites that have superlative views and South Twin is just one of them. I don't get tired of the views but am starting to pay attention to other little things, like the pretty flowers nestled in the rock crevices at the top of the mountain (right). 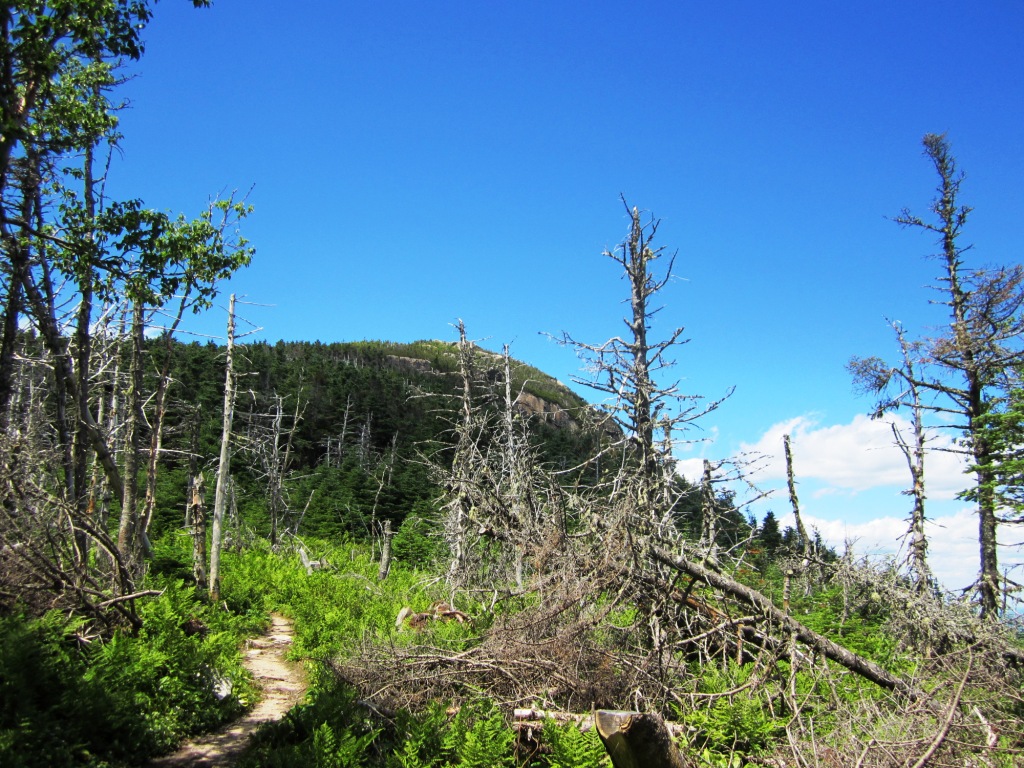 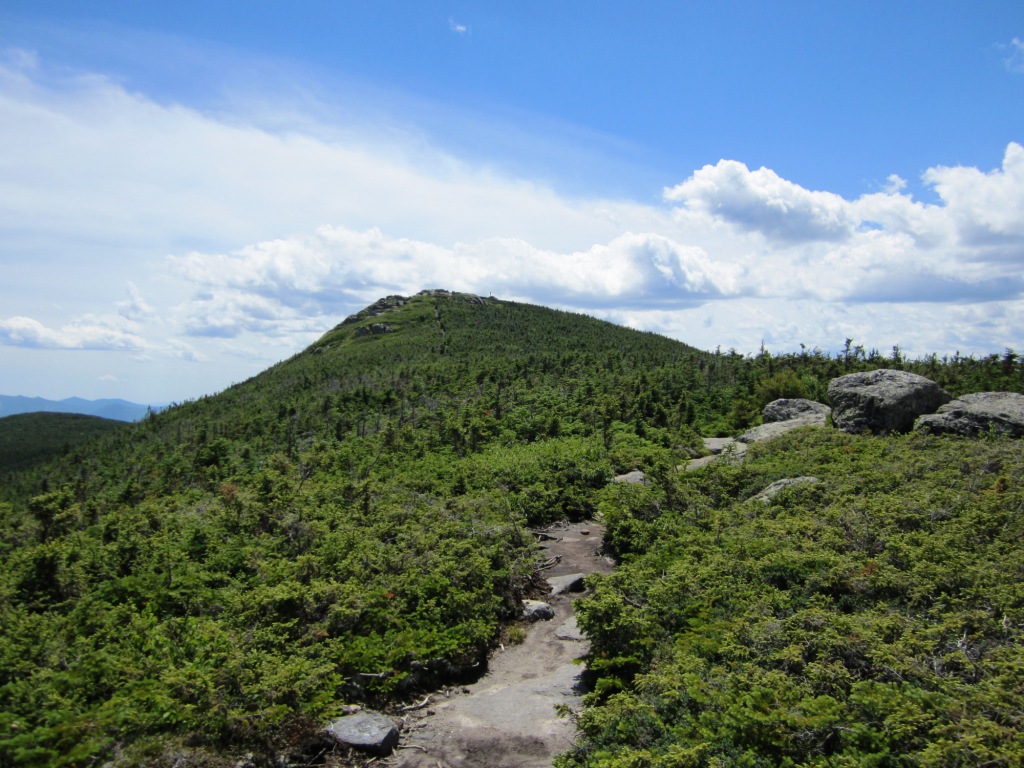 After hanging out for a while on South Twin we dropped to the 4,500' col between the two Twins and then up North Twin (4,800'), which again doesn't manage to get above treeline. Climbing up from the col we had a nice view of North Twin's rocky mass (left) and as we got close to the top we could look back at South Twin (right). 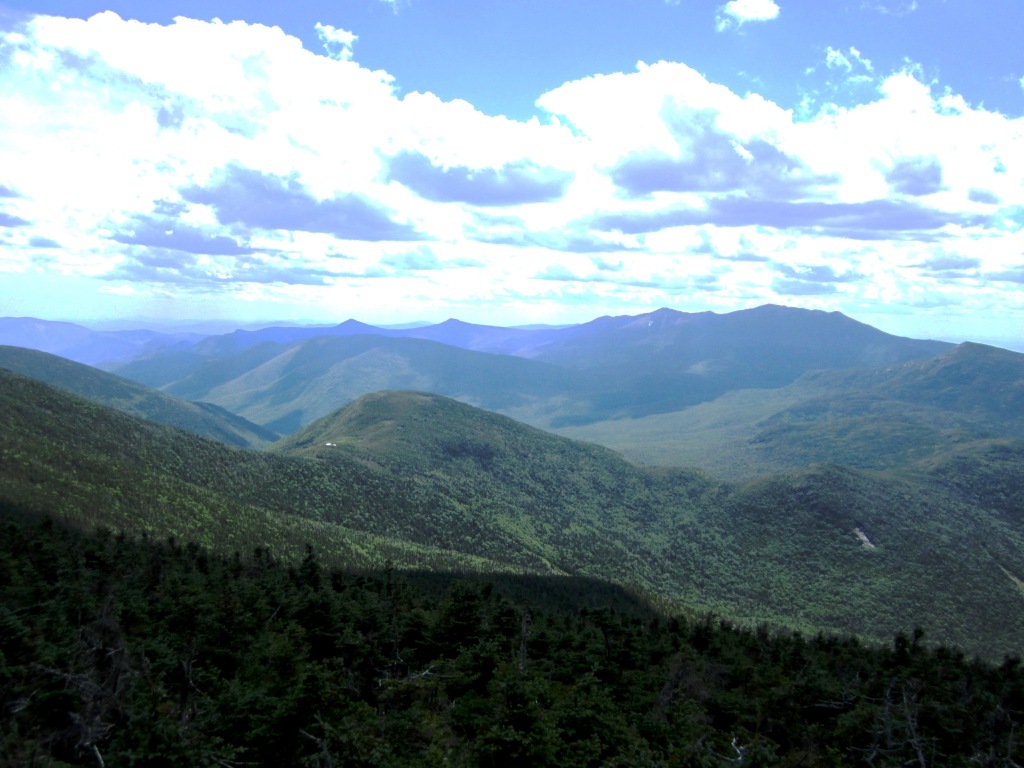 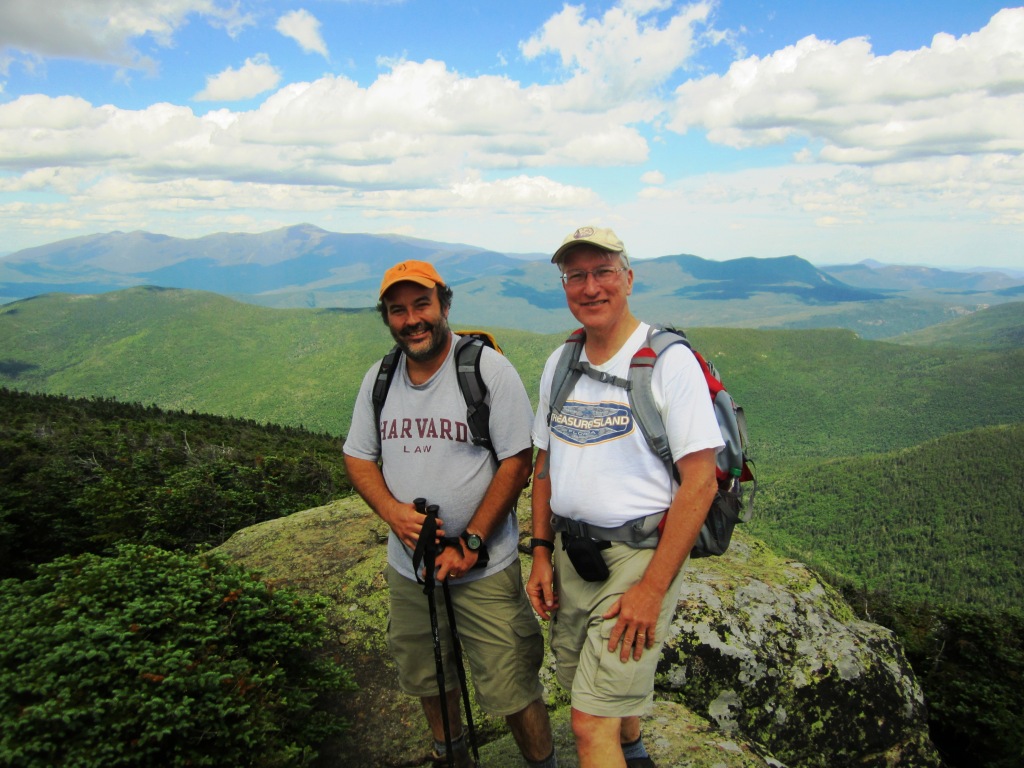 North Twin doesn't have a 360o view and in fact its summit is fully wooded (which makes no sense for a 4,800' mountain). But it has outstanding viewpoints. A ledge just to the west of the peak has a spectacular view south toward Mt. Garfield and Owl's Head and the Franconia Range, with Galehead Hut as a little dot (left). A ledge to the north has a great if standard view looking north toward the Presidentials (right). 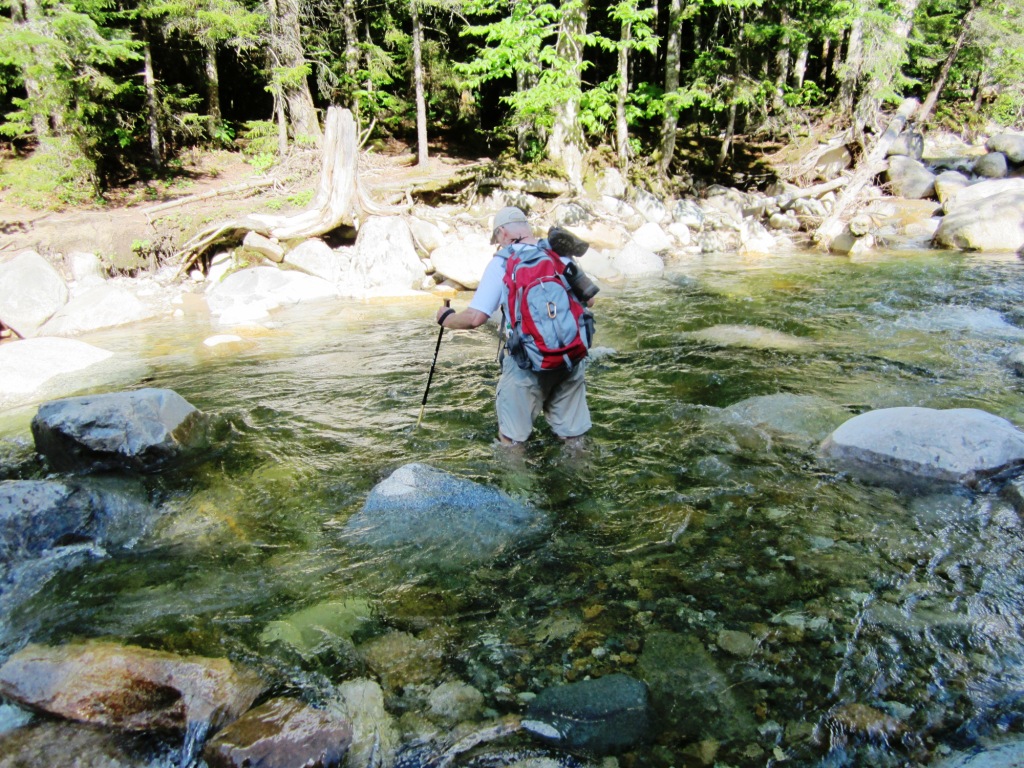 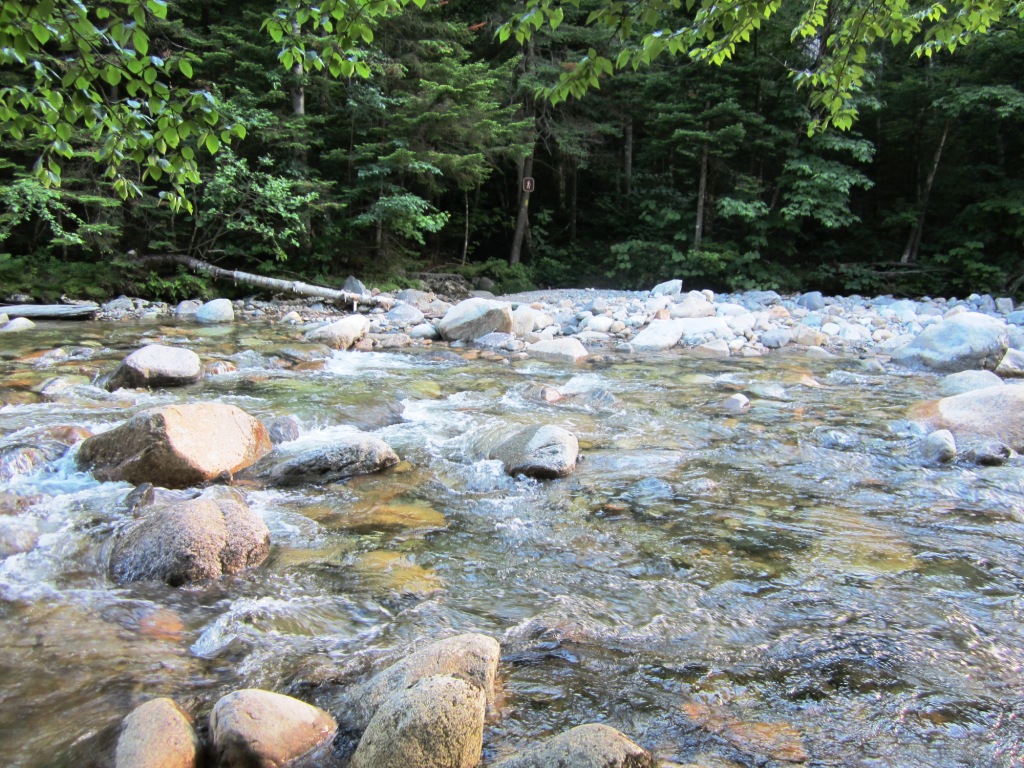 From there we went down the North Twin Trail to the trailhead. The trail involves three crossings of Twin Brook. But even though the water was not particularly high, the brook was wide and crossing could not be made without taking our boots off and getting wet to our thighs in fast-flowing water (left). We did this for the first crossing because we had no choice, but the next two were optional as we could stay on the same bank and bushwhack. We got to the second crossing and the trail sign enjoining us to cross (right - blow it up to see the trail sign) was a little ridiculous considering the width of the stream and the lack of obvious props like rocks or tree trunks. So we stayed on the same bank where a well-worn herd trail was a testimony to the common sense of many generations of hikers. Maybe the USFS will take heed!