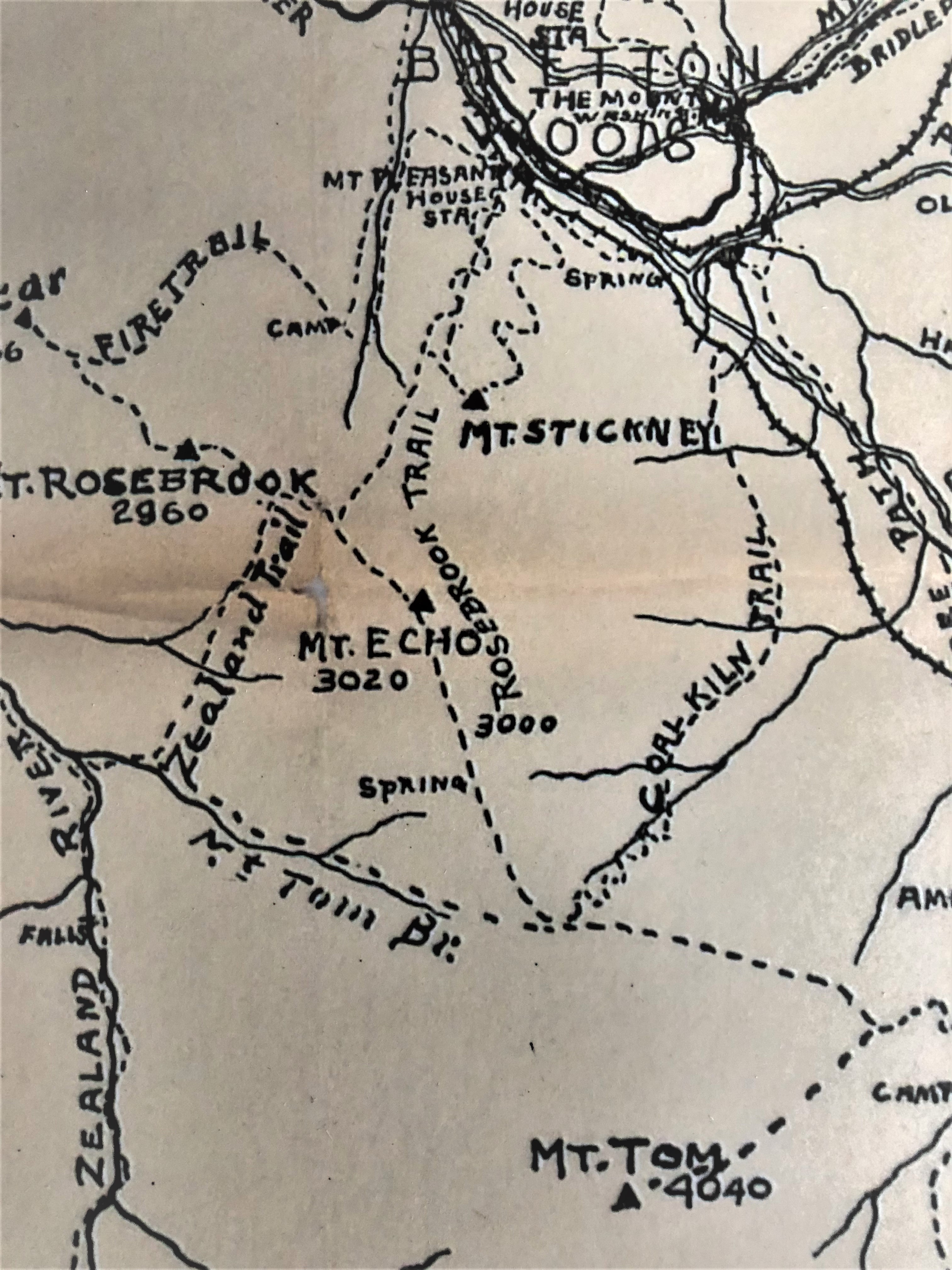 I have at home a pocket map of Bretton Woods trails that the Mt. Washington Hotel used to hand to its guests in 1912. It shows a number of long-lost trails, in particular a Rosebrook Trail that used to follow the Rosebrook ridge over Mts. Stickney and Echo (left). That area is totally trailless now. Peter Wyatt and I had to check it out, and continue on the climb from Mt. Echo to Mt. Tom (which as far as I know has always been trailless). We parked the car at the Rosebrook condos parking lot in Bretton Woods and followed the ski trails up to the cabin at the top of the T-bar (right). 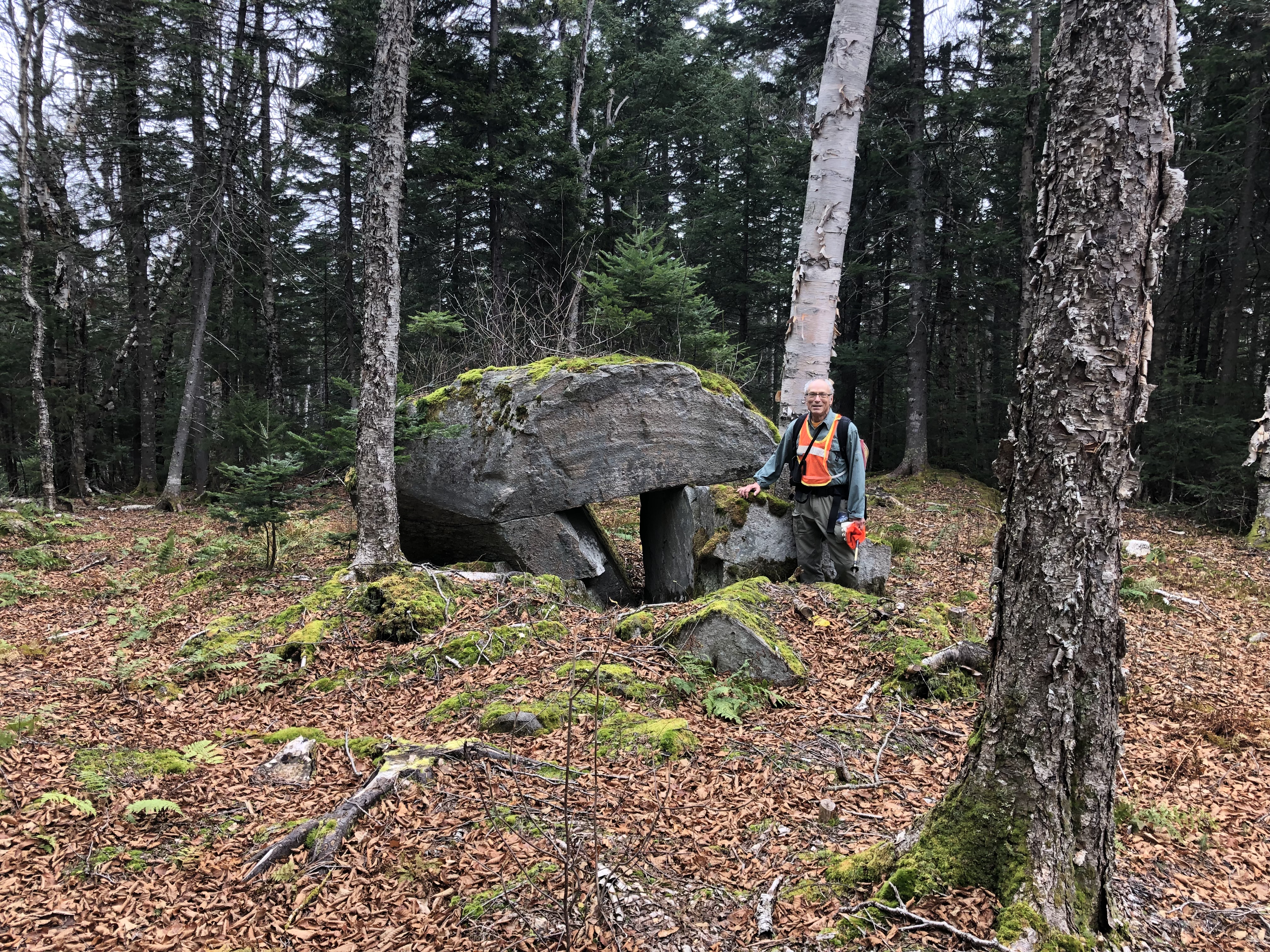 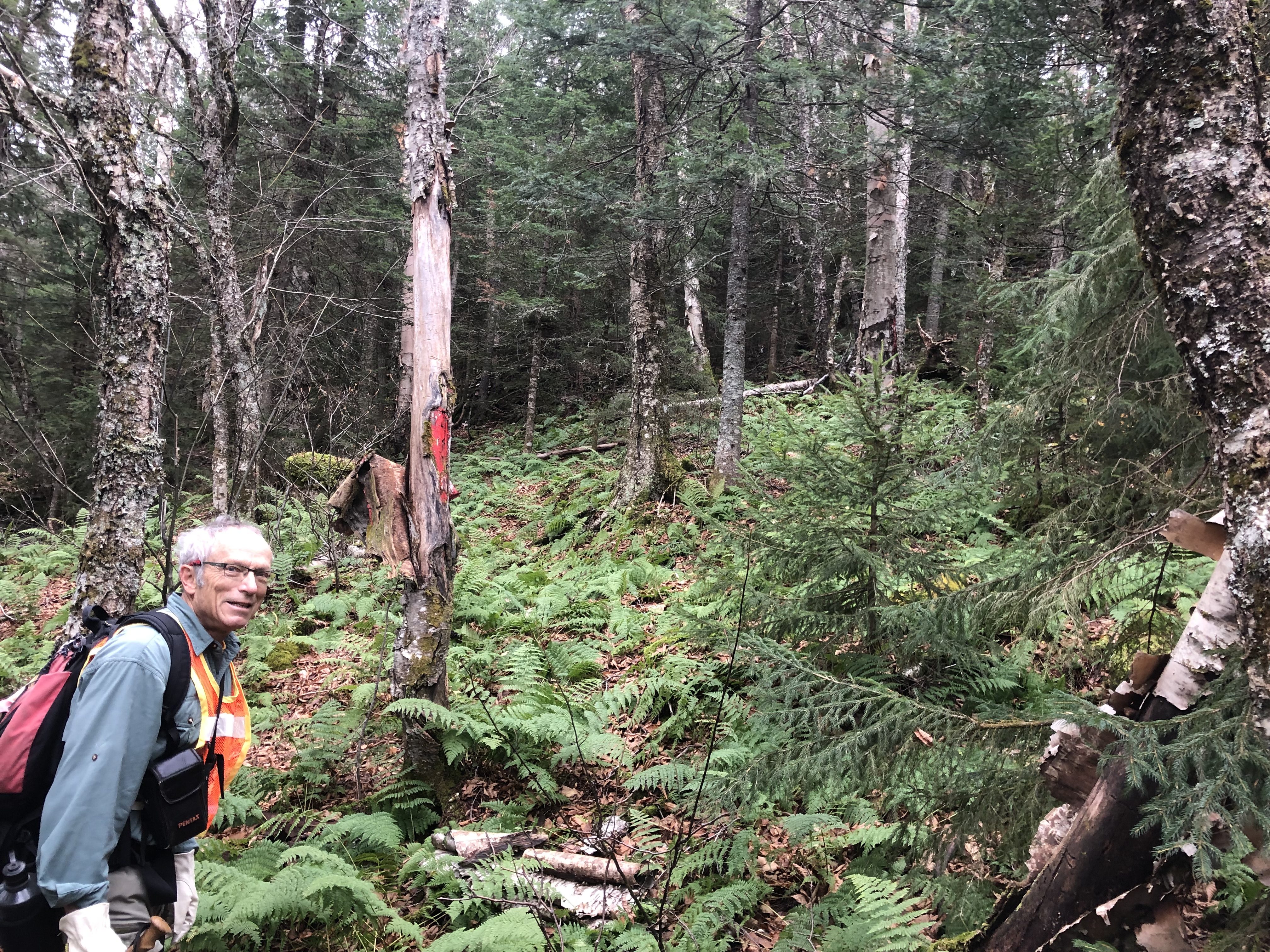 From there we continued to climb on the Mt. Stickney High Country Loop Nordic ski trail, which ends at a big rock at 2,800 feet (left). This is where the bushwhack starts, but all we had to do was follow the national forest boundary marked by red blazes (right) to get almost to the top of Mt. Stickney (3,043 feet). 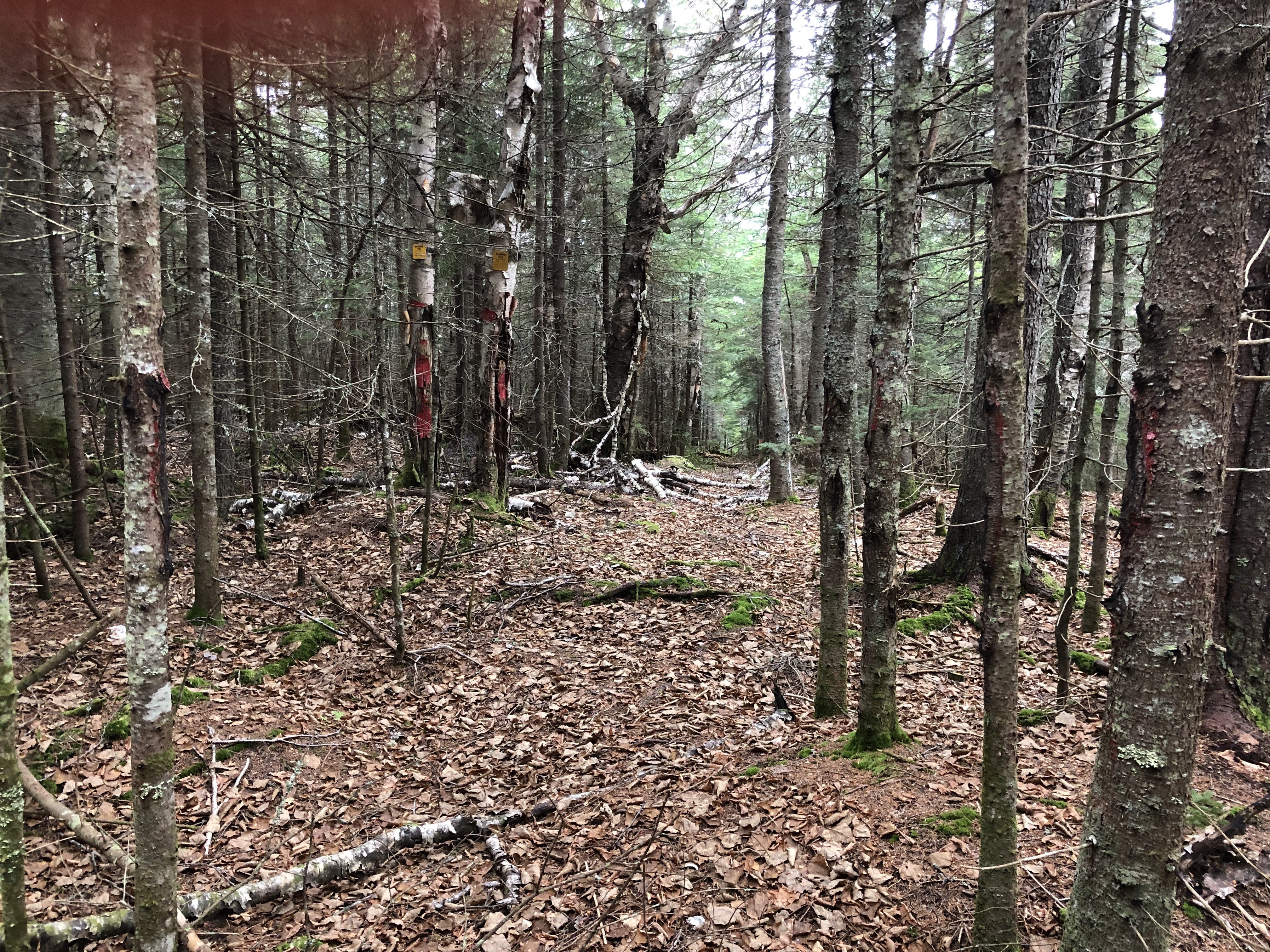 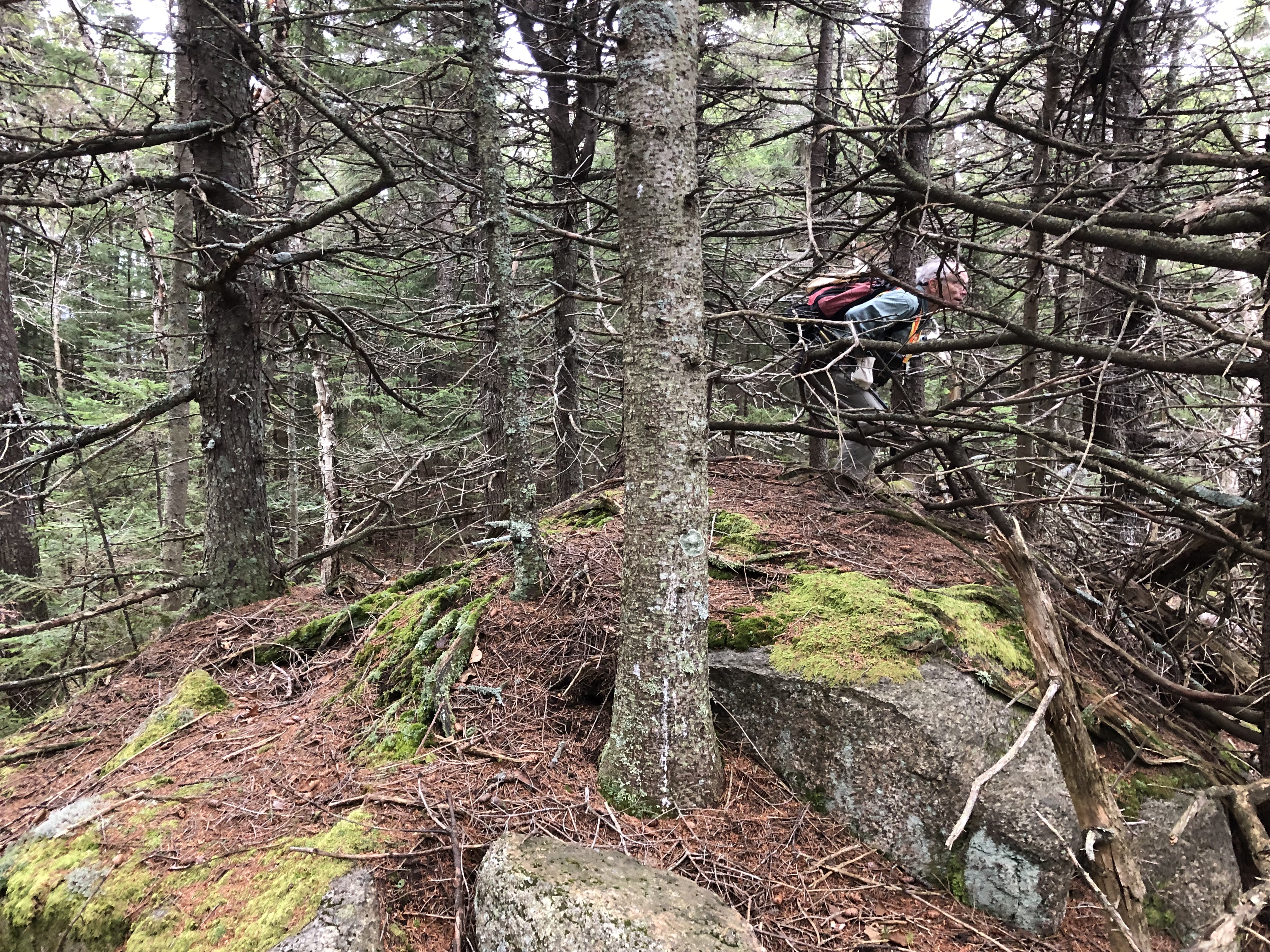 Just short of the top we reached the angle of the National Forest boundary. To the right and following the boundary was a cleared trail heading toward Mt. Rosebrook (left). I wondered if it would connect to the Panorama ski trail a long distance away. Something to explore on another occasion. From there it was a stone's throw to the summit of Mt. Stickney, which is well defined by a rocky outcrop (right). Beyond that outcrop is a sharp drop into the Zealand valley, with some very limited views. 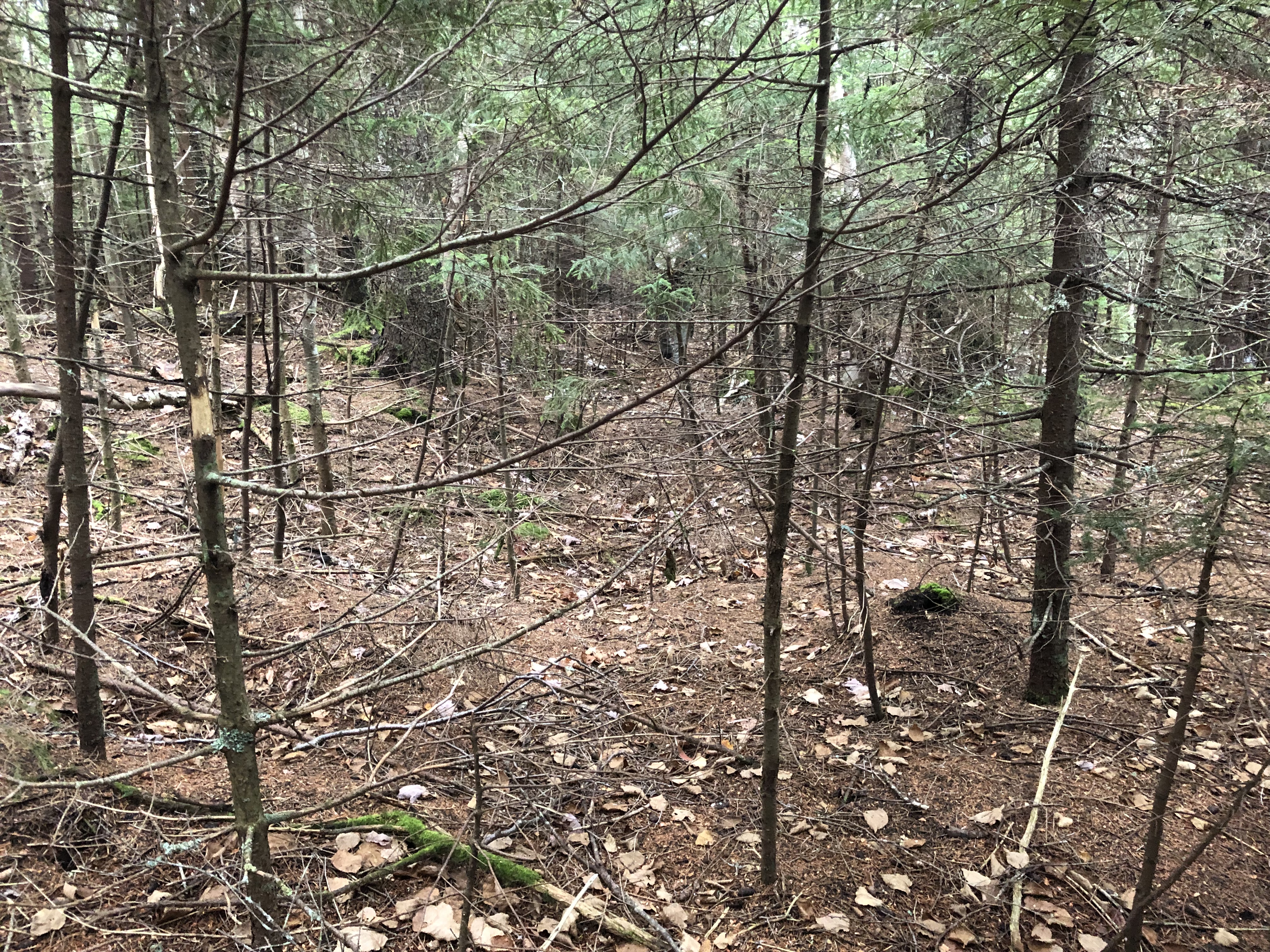 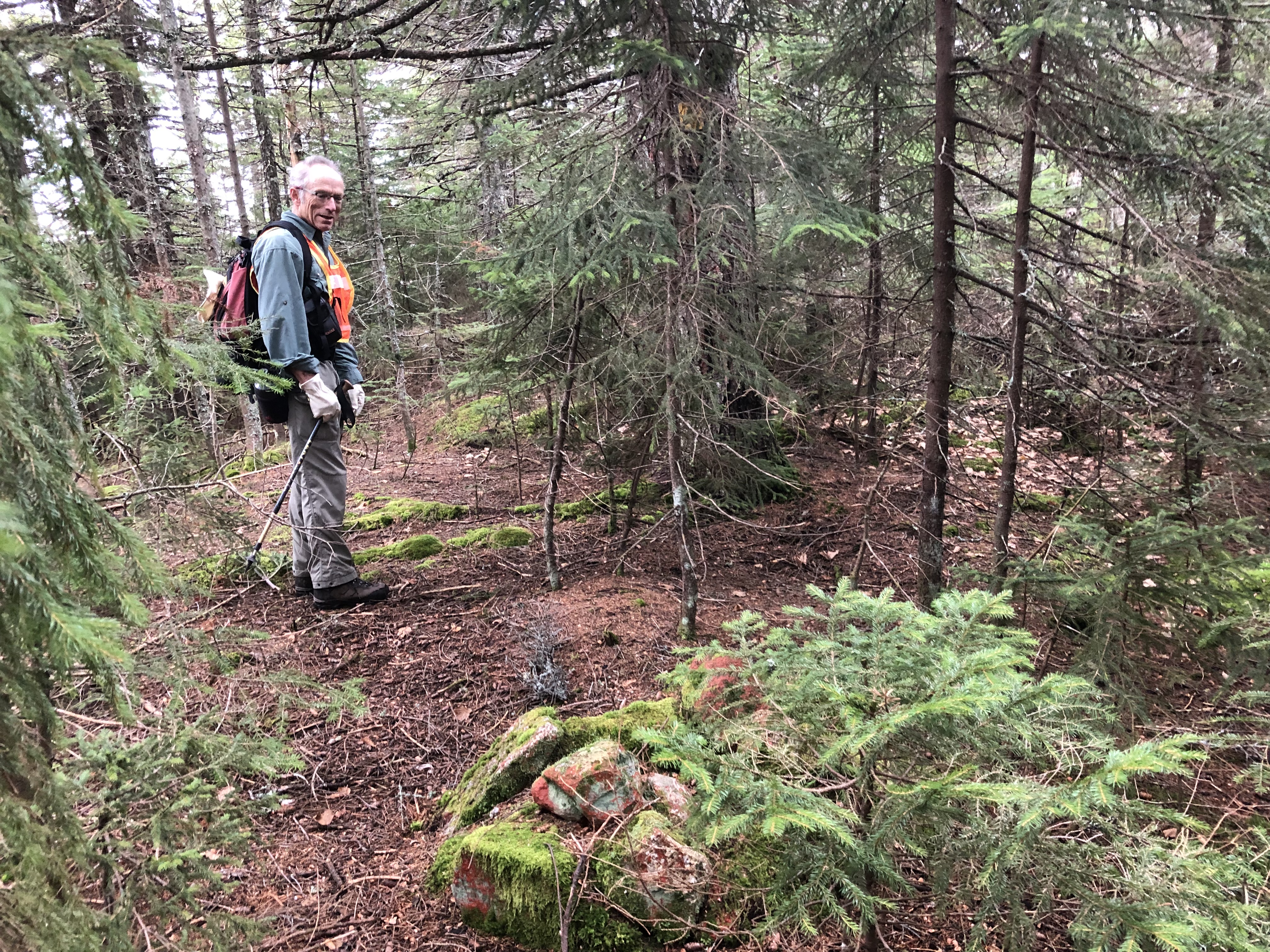 We then continued south along the ridge, down and then back up Mt. Echo (3,084 feet). The ridge was well defined, with steep drop-offs on both sides, so the direction was clear. I had wondered if we would run into a lot of blow-downs, but in fact not at all. The forest was fairly open (left), with mature birches and spruce, and only occasionally did we have to plow through young spruce or detour to avoid a blowdown. We occasionally ran into old National Forest boundary markers (right) even though we were well within the NF. We saw a lot of fresh moose poop. At one point we ran into the semblance of a trail, only to lose it after a few yards. The Rosebrook Trail is really gone. 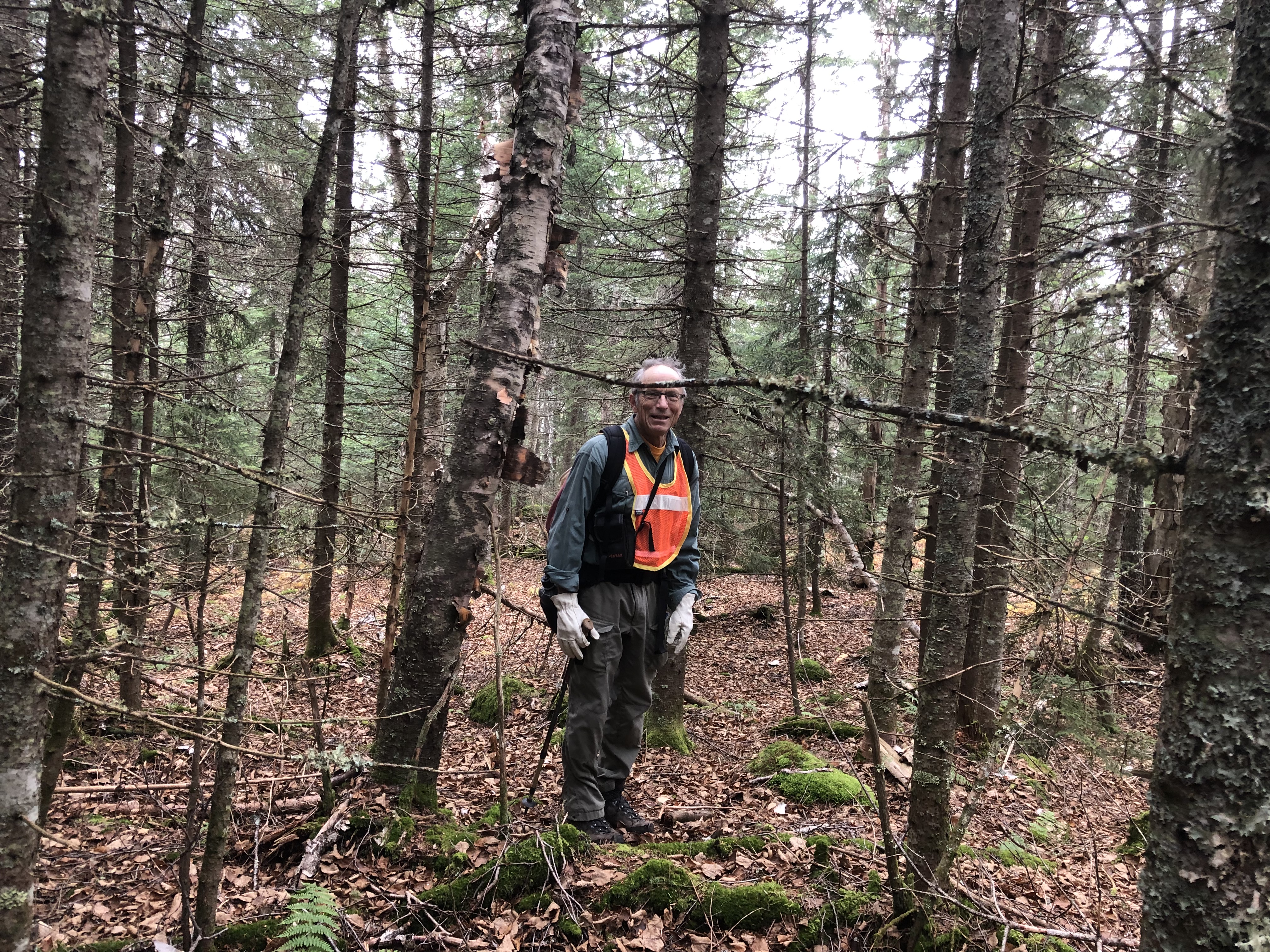 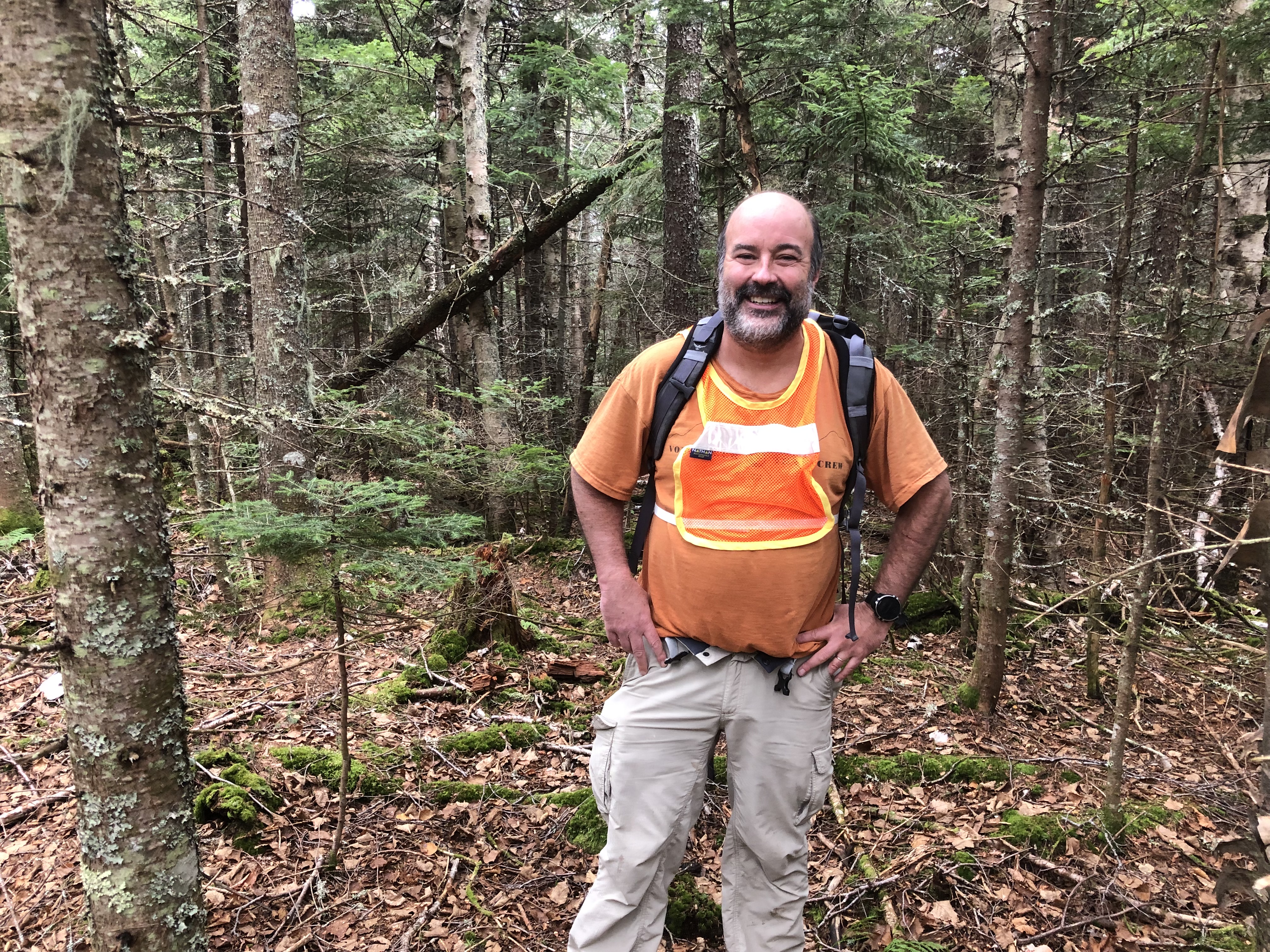 In this way we got to Mt. Echo, but unlike Mt. Stickney it wasn't clearly defined - at least we couldn't find a clear top. So we had to trust our altimeters and claim victory over a flattish area that we called the top (left and right). 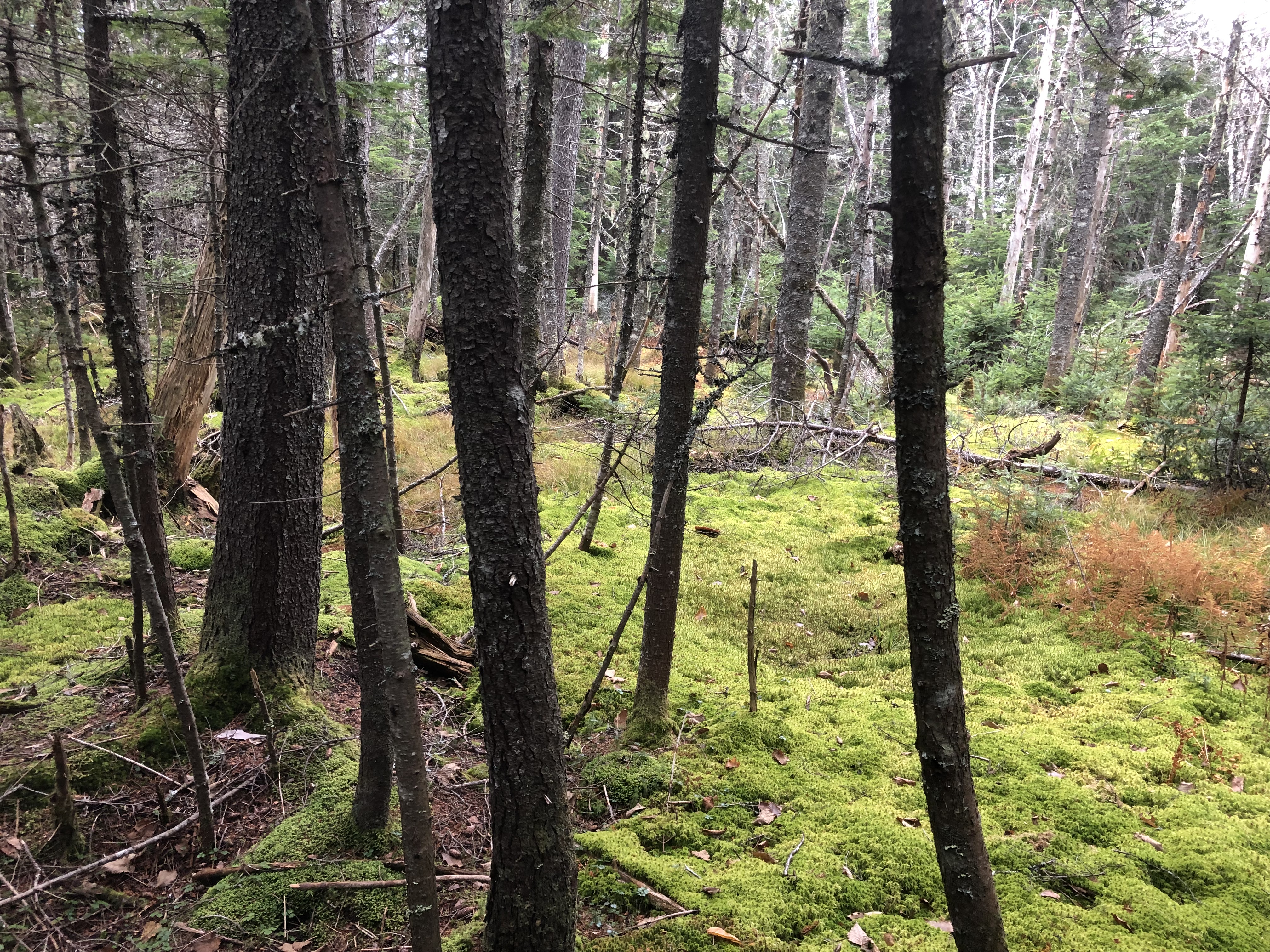 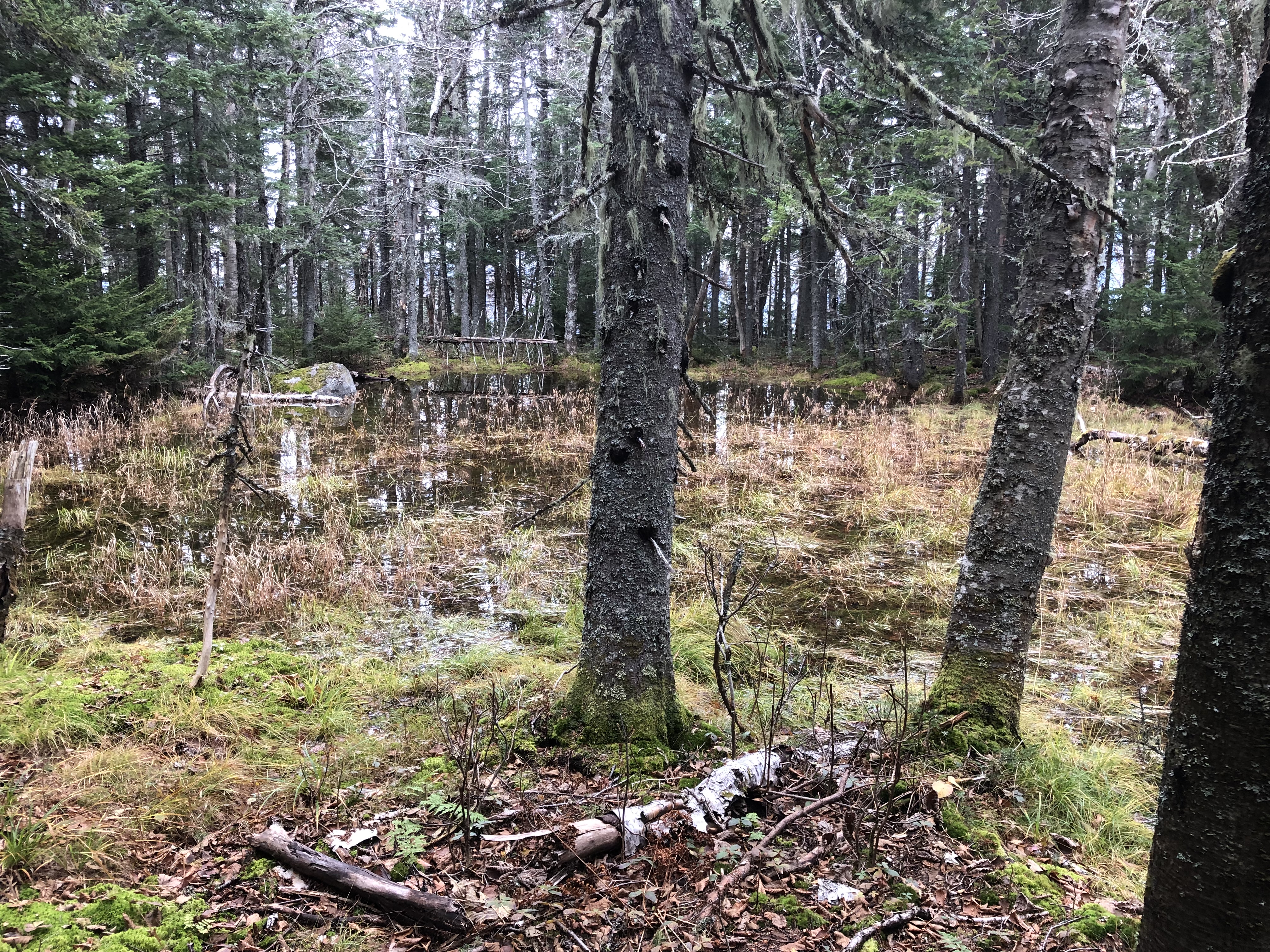 From Mt. Echo there was a relatively steep drop-off along the ridge that took us below 3,000 feet, after which the terrain leveled. Again the woods were fairly open, and we walked quite some time in a mossy area (left) and even encountered a small but authentic pond (right). 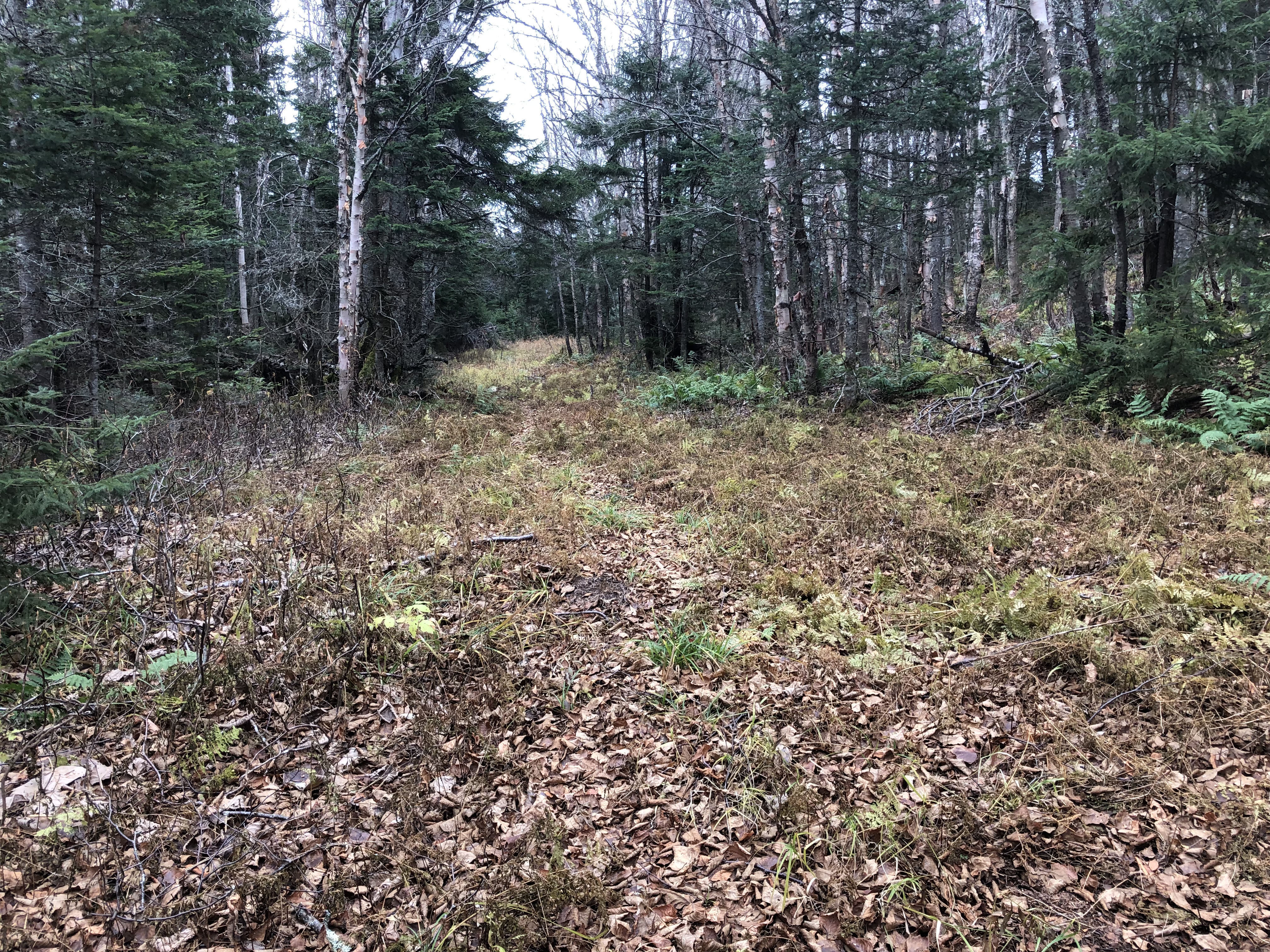 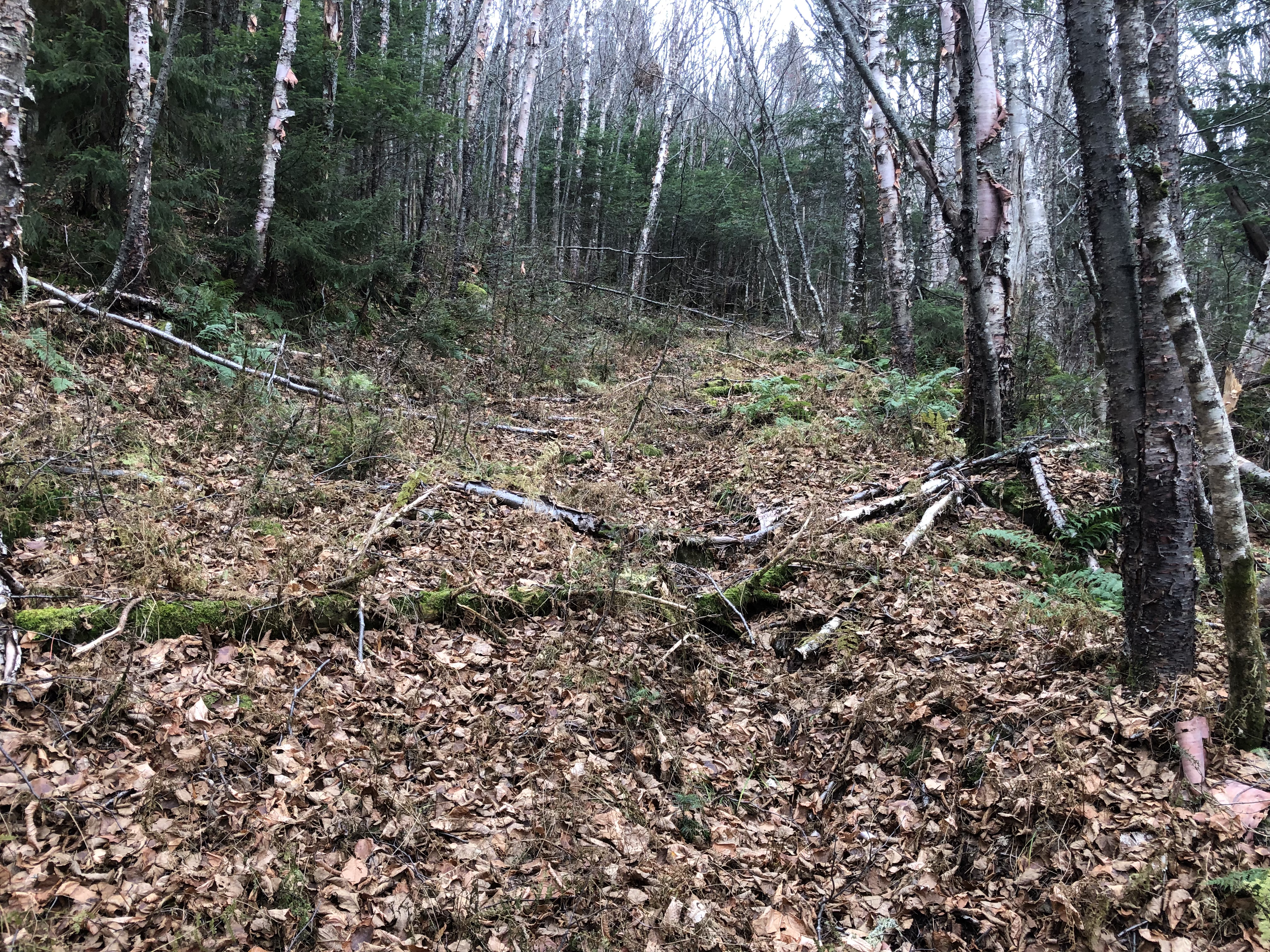 As we got close to the base of Mt. Tom we hit a snowmobile trail (left), complete with the human artifact of a Miller Lite beer can. This is the end of the Mt. Tom snowmobile trail that one can see on some maps. It wasn't very helpful to use because it dead-ended right there. Immediately afterward we ran into what looked like an old logging road (right) but again it wasn't helpful to follow because it had a lot of blow-downs. So we just started the climb to Mt. Tom through the woods. We were at 3,000 feet and Mt. Tom is 4,050 feet, so we had some climbing to do. 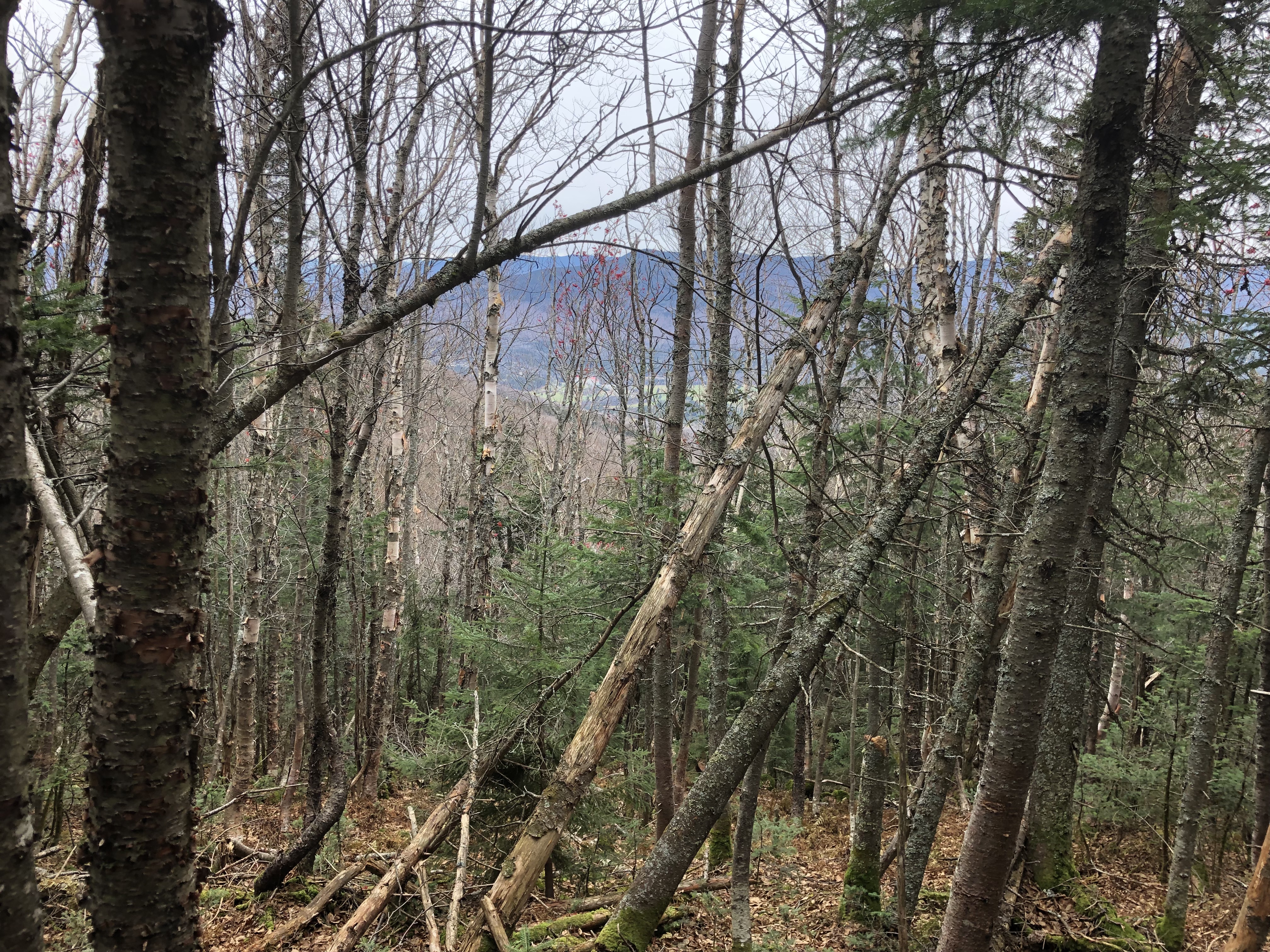 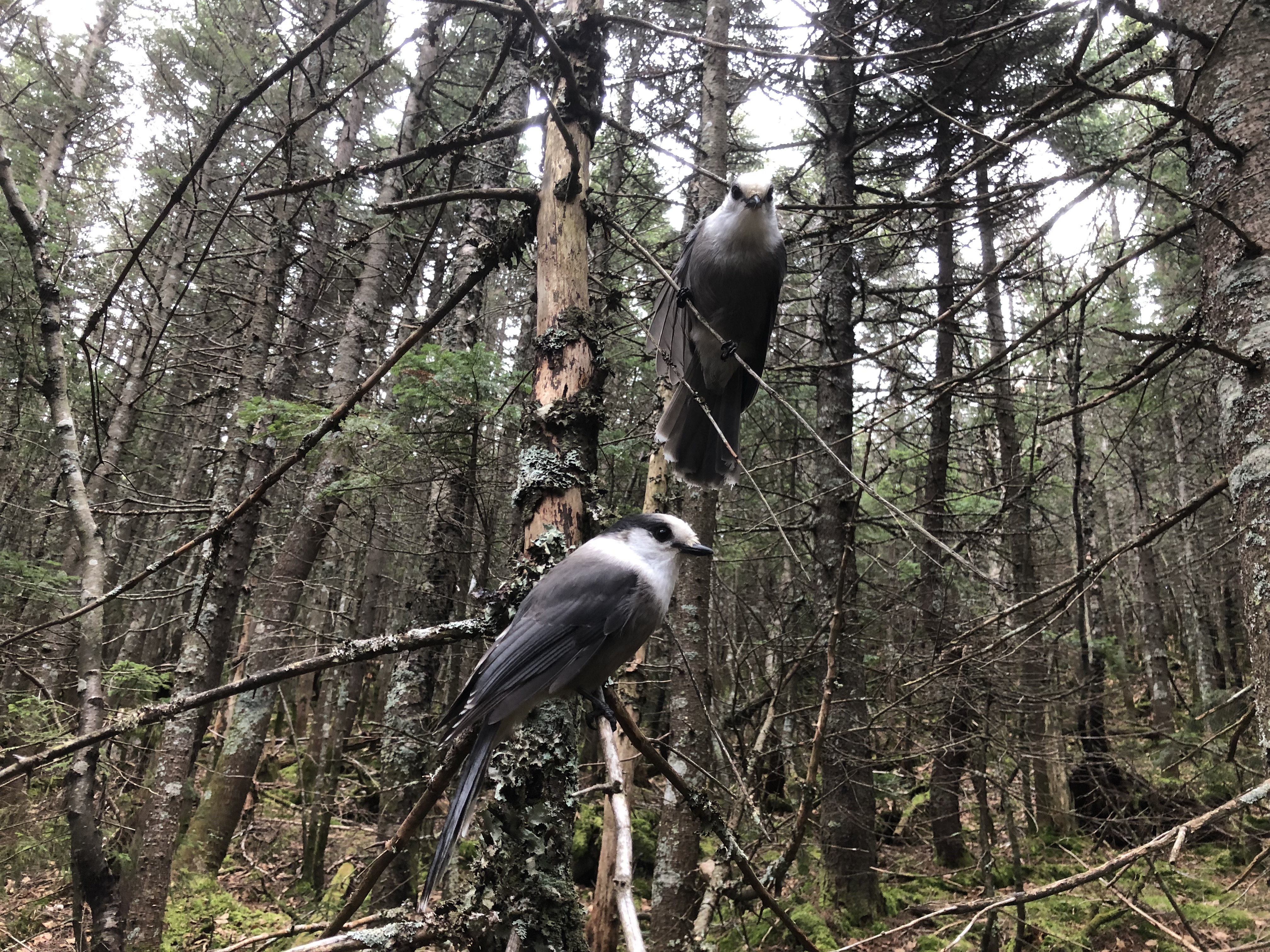 The first part of the climb to 3,500 feet was easy, through fairly open forest. At one point there was a view toward the Mt. Washington Hotel and Bretton Woods (left). At 3,500 feet we encountered three very friendly grey jays (right). 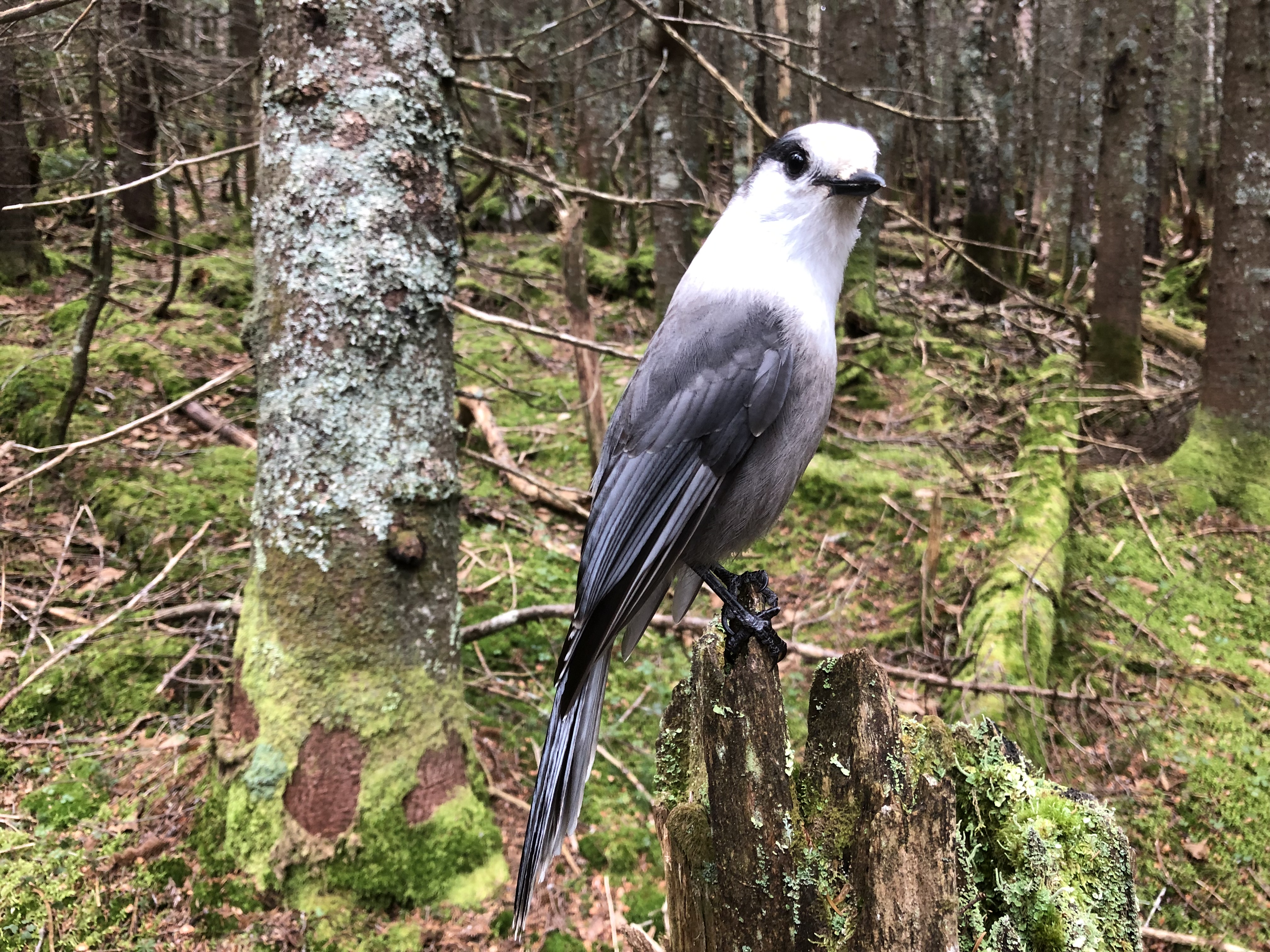 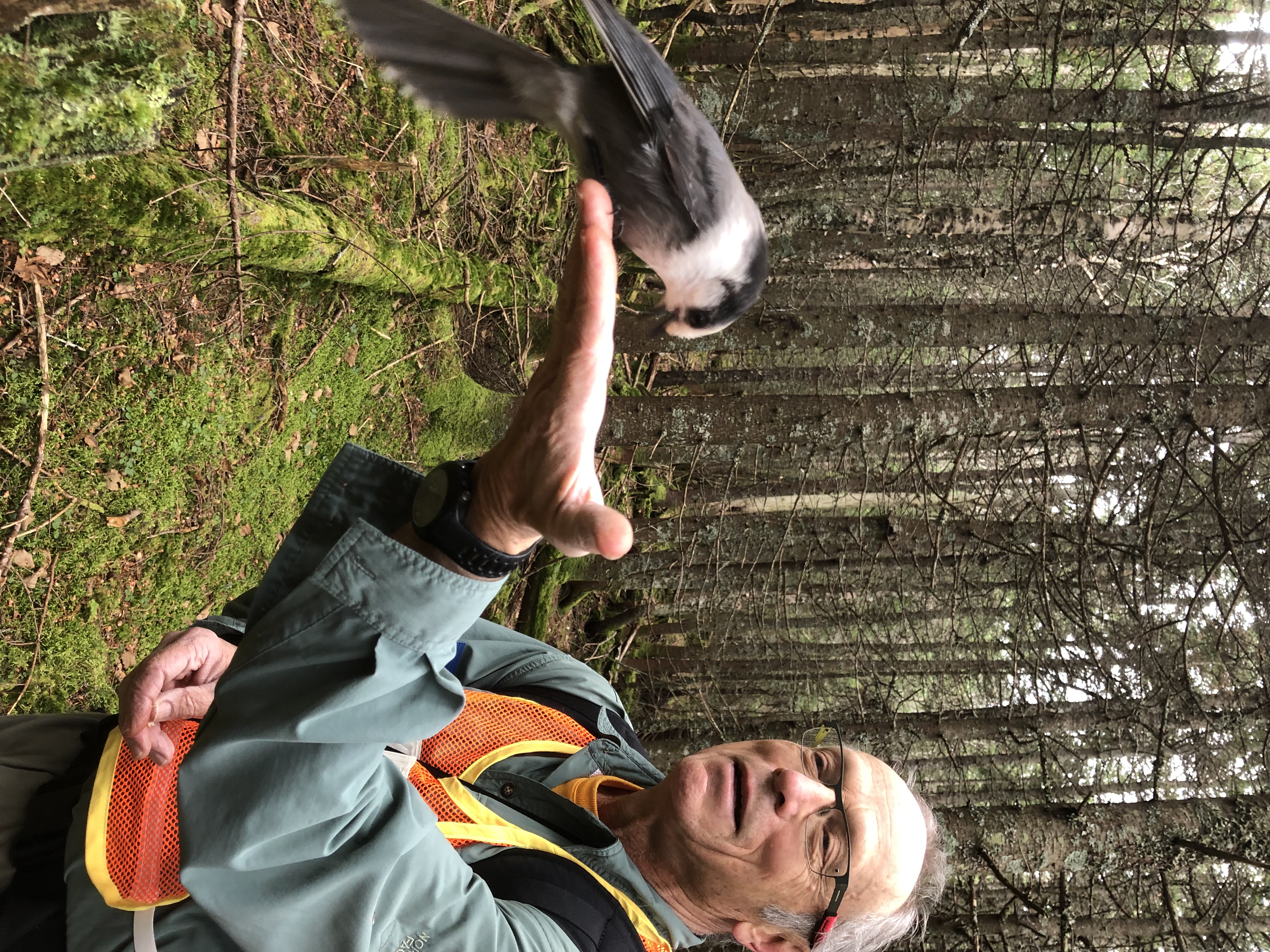 I love grey jays so much. iSeeing them makes my day. They're incredibly cute (left) and have absolutely no fear of humans. They will take food off your hand (right). They always live in pairs, sometimes (like here) with a bachelor(ette) in tow. They are particularly active in the fall as they stash food for the winter. I am used to seeing them on mountaintops at about 4,000 feet, where they can count on human hand-outs, but I was particularly pleased to see them here in the middle of the woods where no human ever shows up. 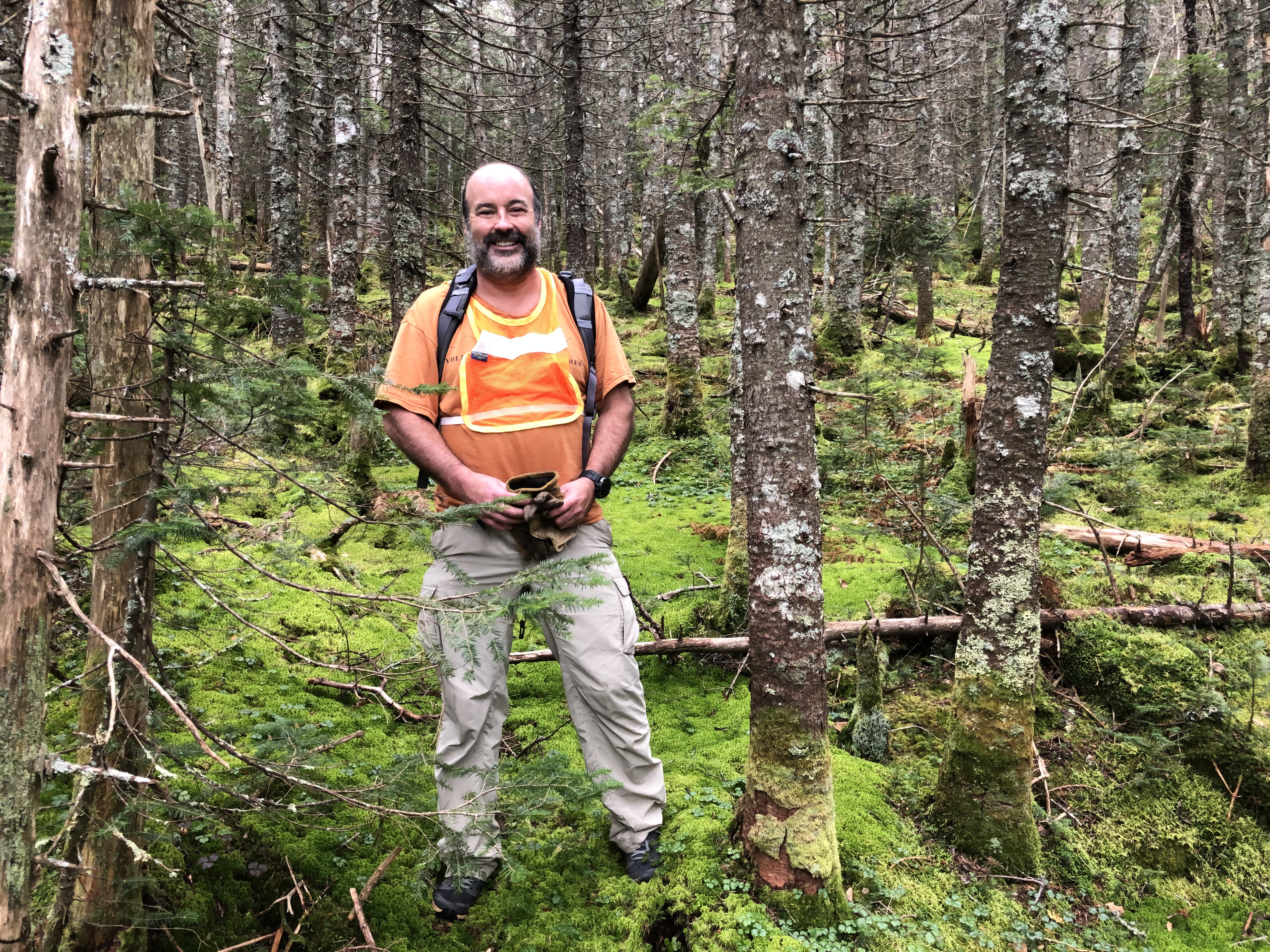 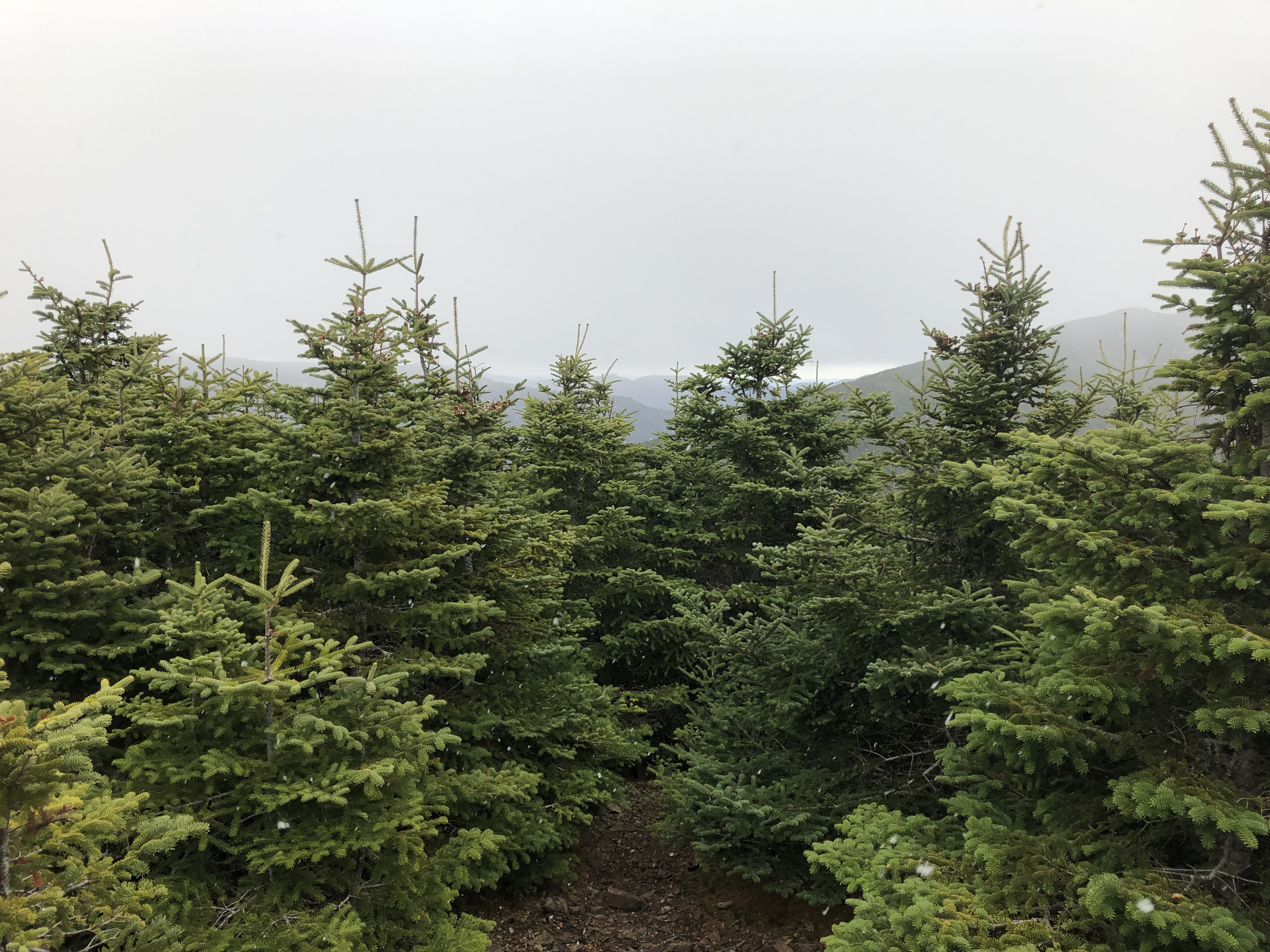 Above 3,500 feet the going got much rougher, as we had to ascend rocky cliffs with lots of young spruce and roots and holes. It was not particularly difficult but a lot of hands and feet and we had to be careful with the holes. There were still some welcome mossy areas where the going got easier (left). And then at 3,900 feet the terrain got flatter. We had to fight our way through young spruce and blowdowns, but eventually the terrain opened up and we reached the Mt. Tom Spur trail just a few yards below the top of Mt. Tom. I had wondered if we would run into a mess of blowdowns as we got close to the top but it really wasn't bad. We went past the top of Tom (cairn) and I was sad to see that the Zealand view that was there in past years was now completely gone. We took the side trail on the way down that gives a view toward Crawford Notch, but the spruce are growing like crazy and the view is now really limited and standing-only (right). Again the view used to be great. We went down the A-Z trail and the Avalon trail to Crawford Depot. Total bushwhack from Stickney to Tom took us about four hours.