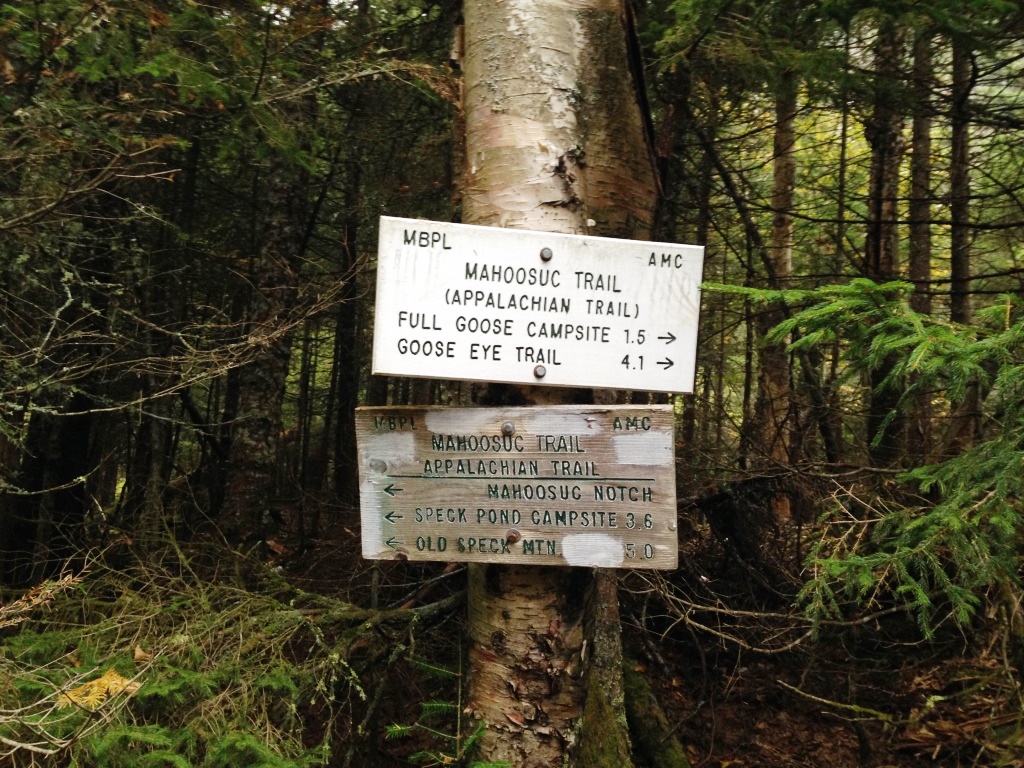 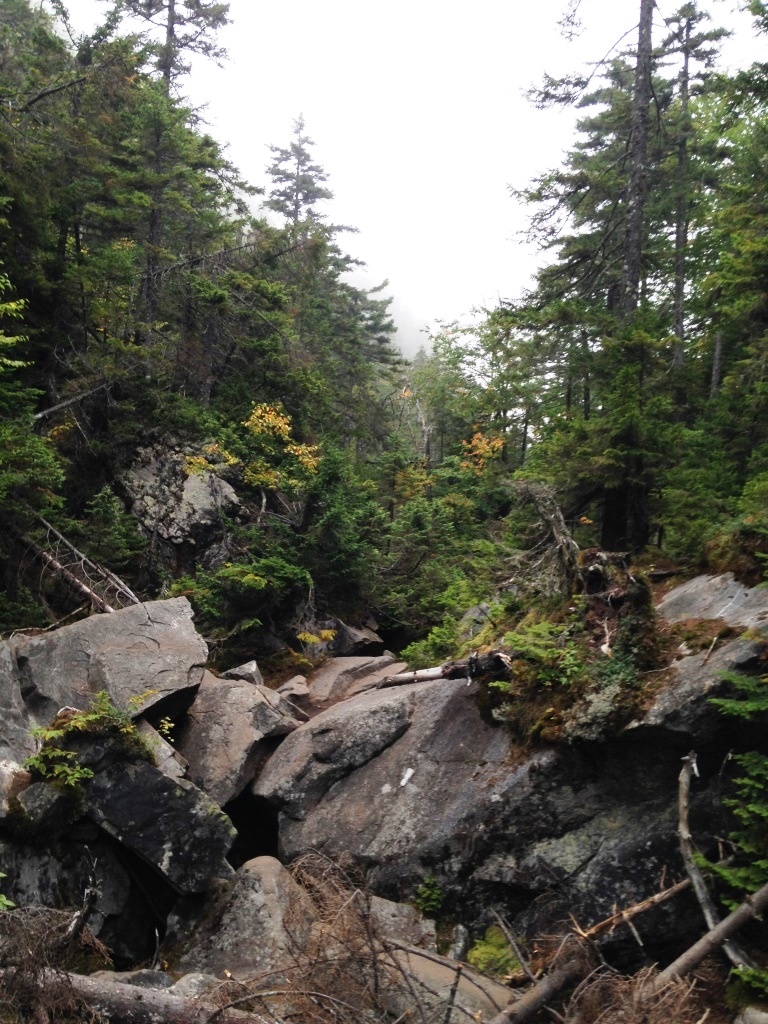 Mahoosuc Notch is described as "the toughest mile on the Appalachian Trail" and that's likely an understatement. We combined Mahoosuc Notch and Old Speck into a long day trip, starting with the Notch Trail to access the AT and coming down Speck Pond Trail with a 45-minute walk back to the car. Getting to the trailhead required an 11-mile drive on Success Pond Rd, a dirt road in not-so-great shape (20 mph all the way). Notch Trail was in great shape, with excellent footing and many bog bridges. This was a nice surprise for a little-used trail. It delivered us effortlessly from the 1,600 feet trailhead up to the AT junction at 2,600 feet (left) and from there the descent through Mahoosuc Notch began (right). 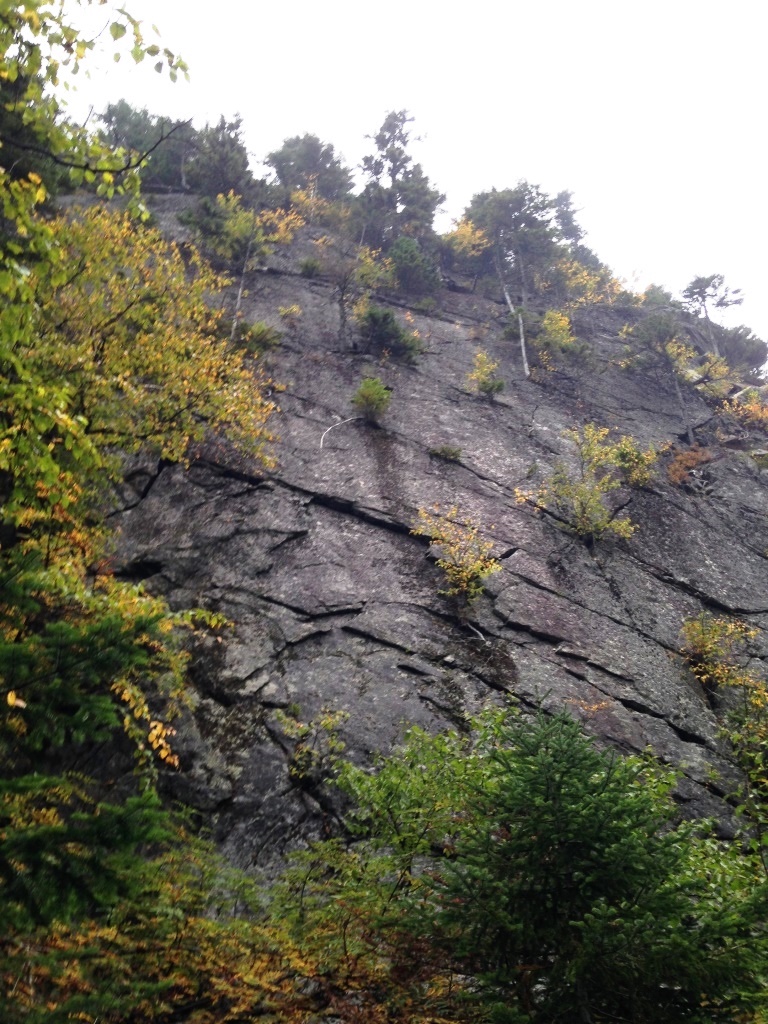 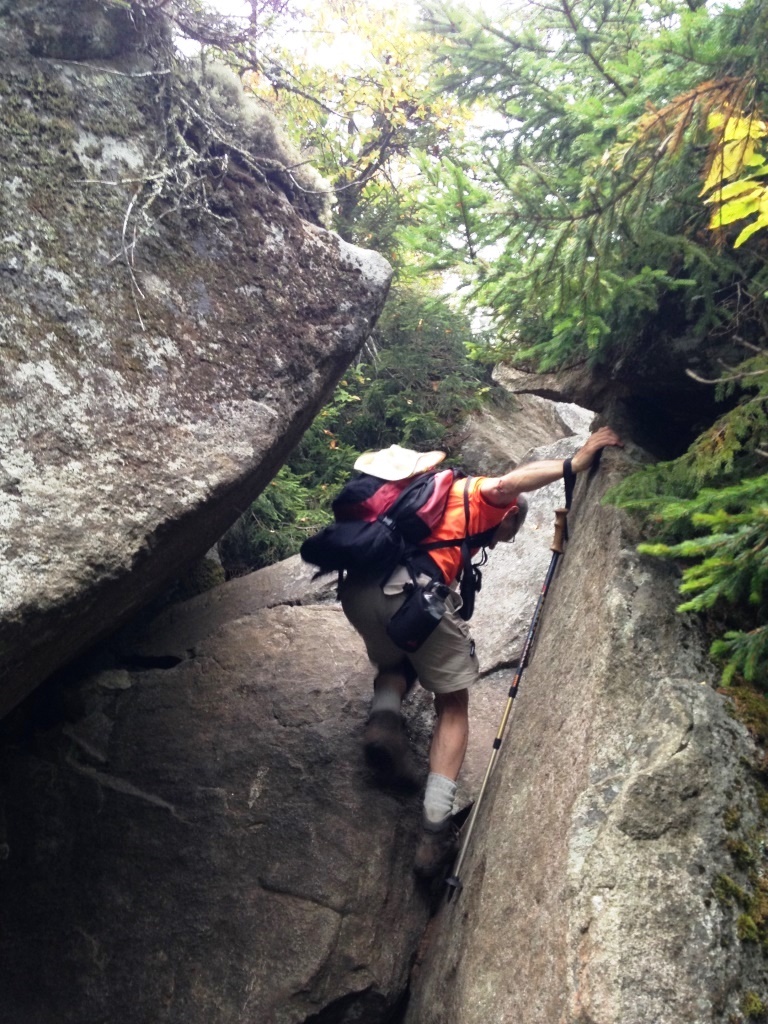 Mahoosuc Notch is a narrow cleft between tall cliffs (left) that have tumbled huge boulders down to the bottom to clog the way. Going through involved continuous scrambling (right). It reminded me of the Subway at King Ravine - same kind of difficulty but much much longer. It would take us 1h50 min to cover the Mahoosuc Notch mile - that's taking our time and taking pictures but still it felt very long. The first half was a lot of fun but by the end I was ready for it to be over. 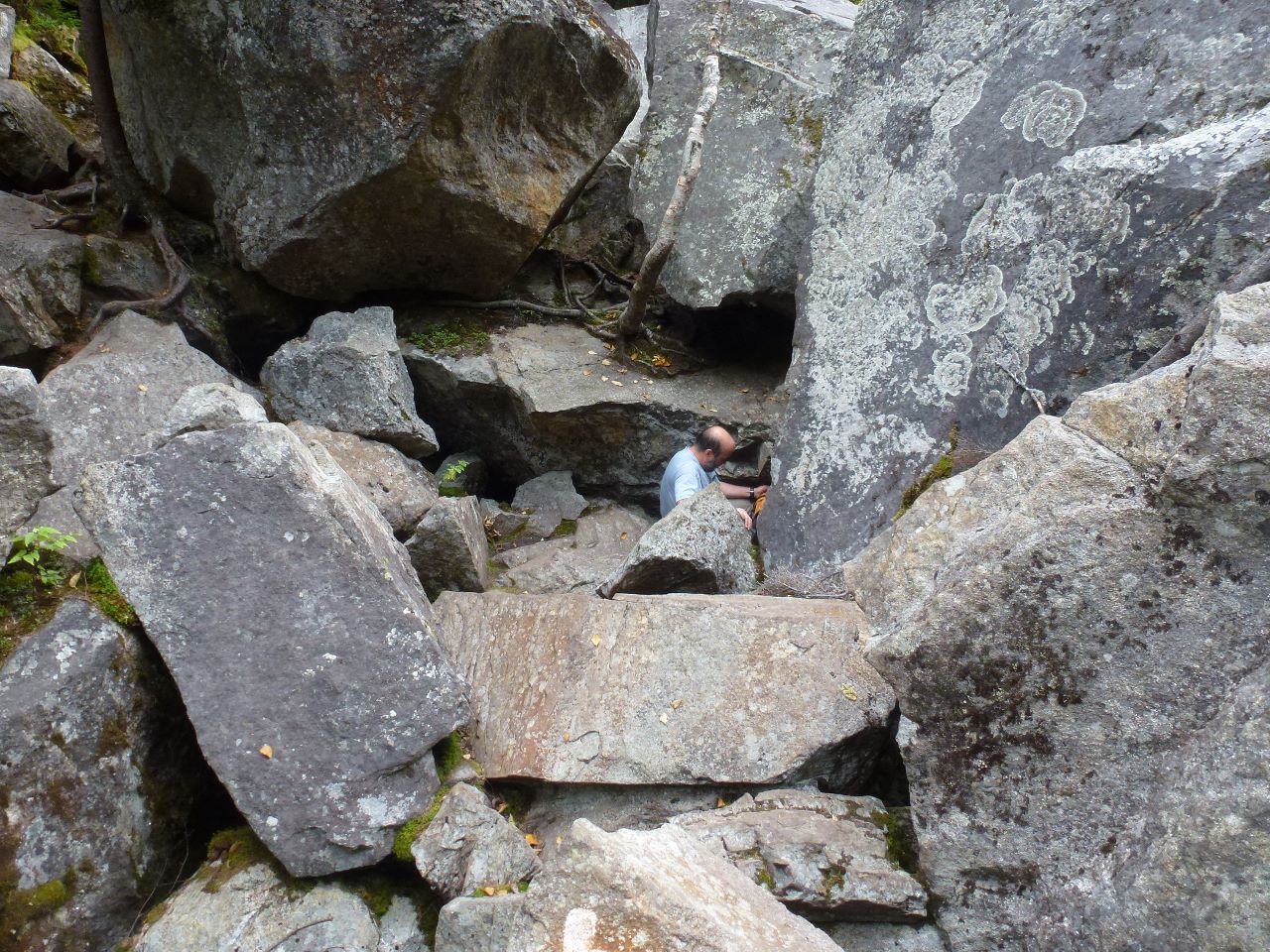 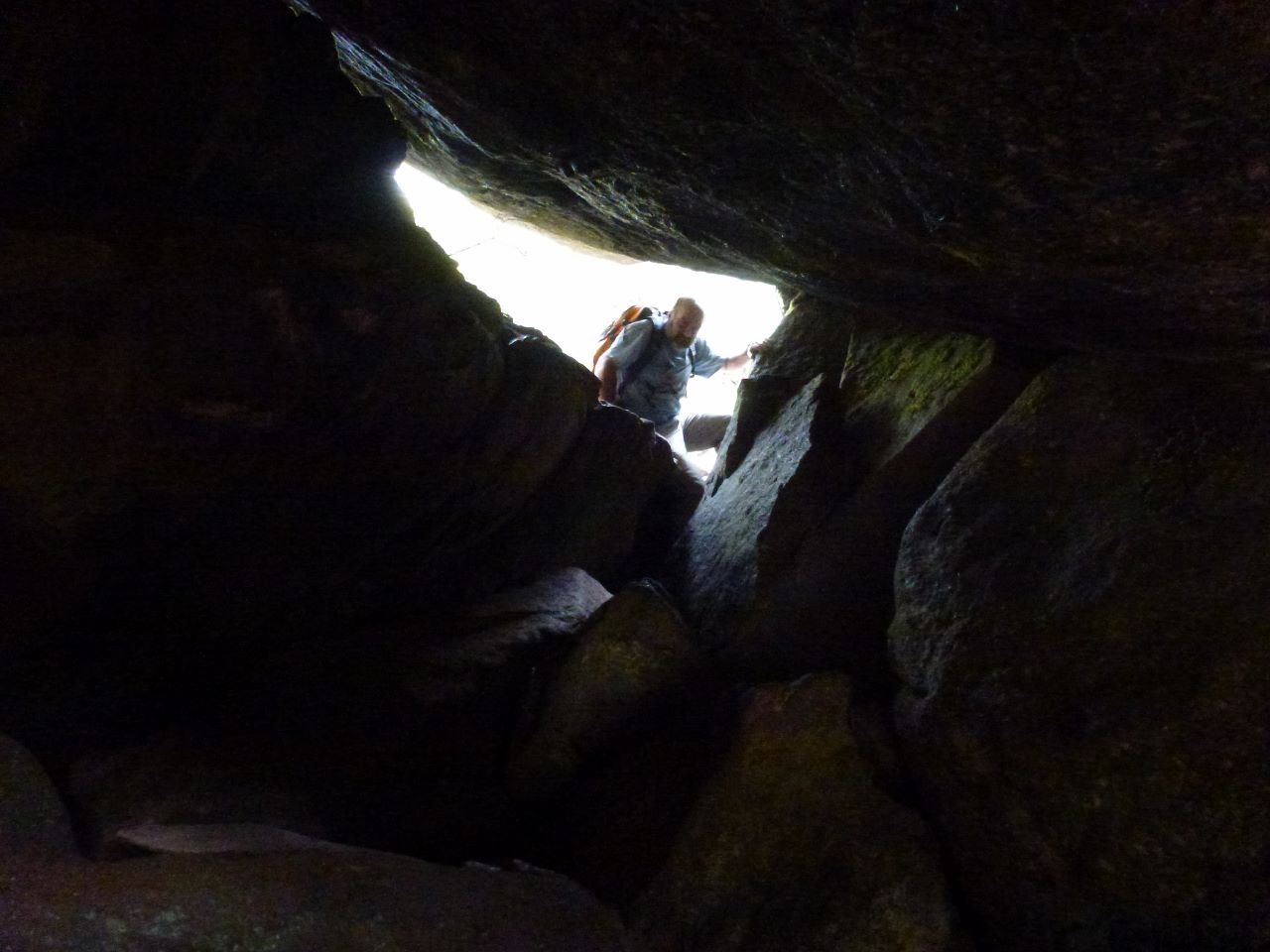 Left and right are more pictures of the passage through the Notch. It required constant focus, and making decisions on what route to take, although white AT blazes often helped. Several passages through caves (right) required removal of my pack. Steep descents were best done on my butt. There was not much exposure - nothing compared to dangerous trails in the Whites such as Huntington Ravine or the Six-Husbands Trail. But I still had to be careful about the many deep crevices as I found my footing among the boulders - slipping was not an option. Fortunately the rocks were dry and traction was good. I would be concerned about doing this on a rainy day. 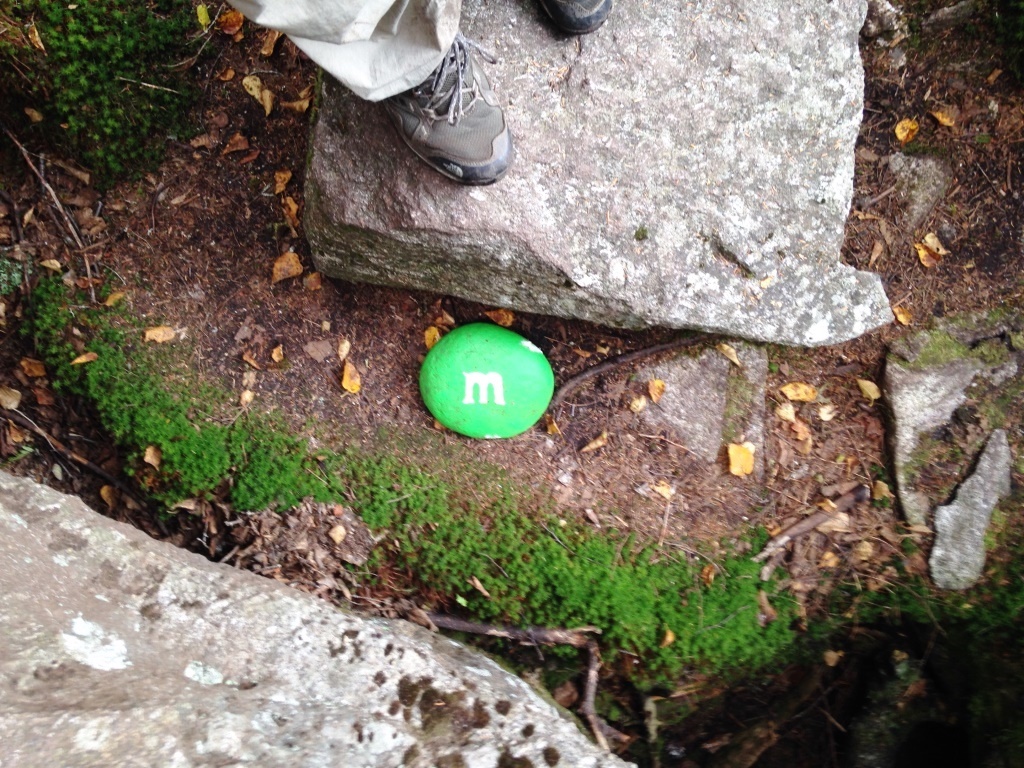 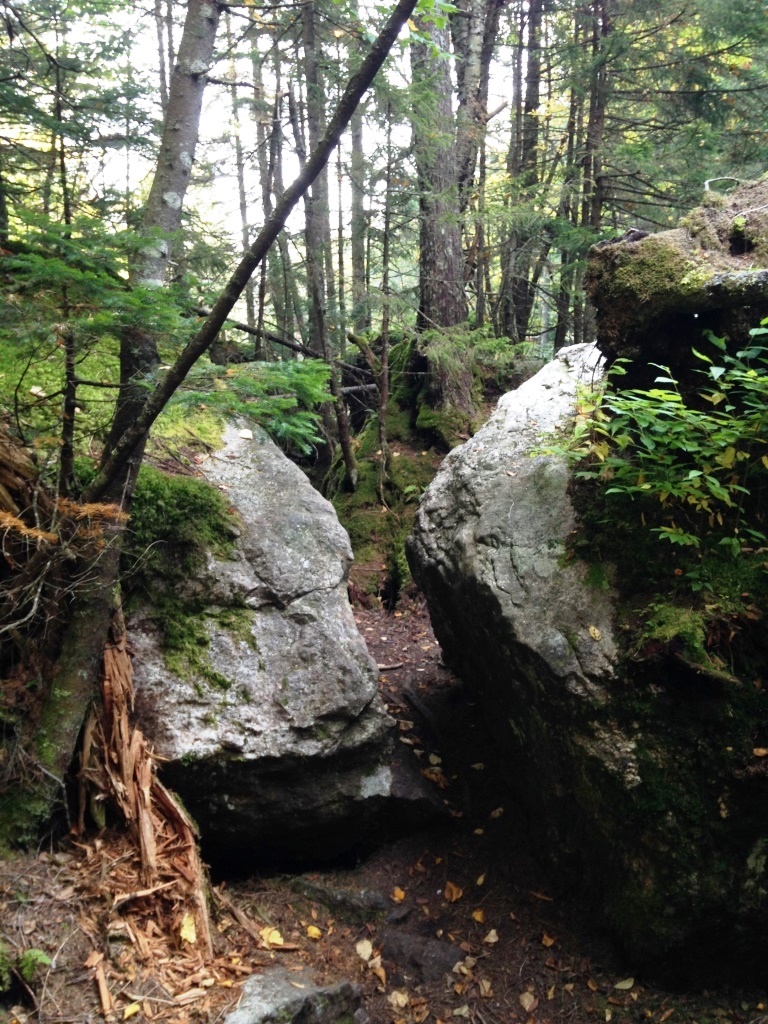 Somewehere among the boulders someone painted a round rock into a green M&M and I thought that was so cool (left). At 2,100 feet we got out of the Notch through a children's gate (right). I barely squeezed through without my pack. 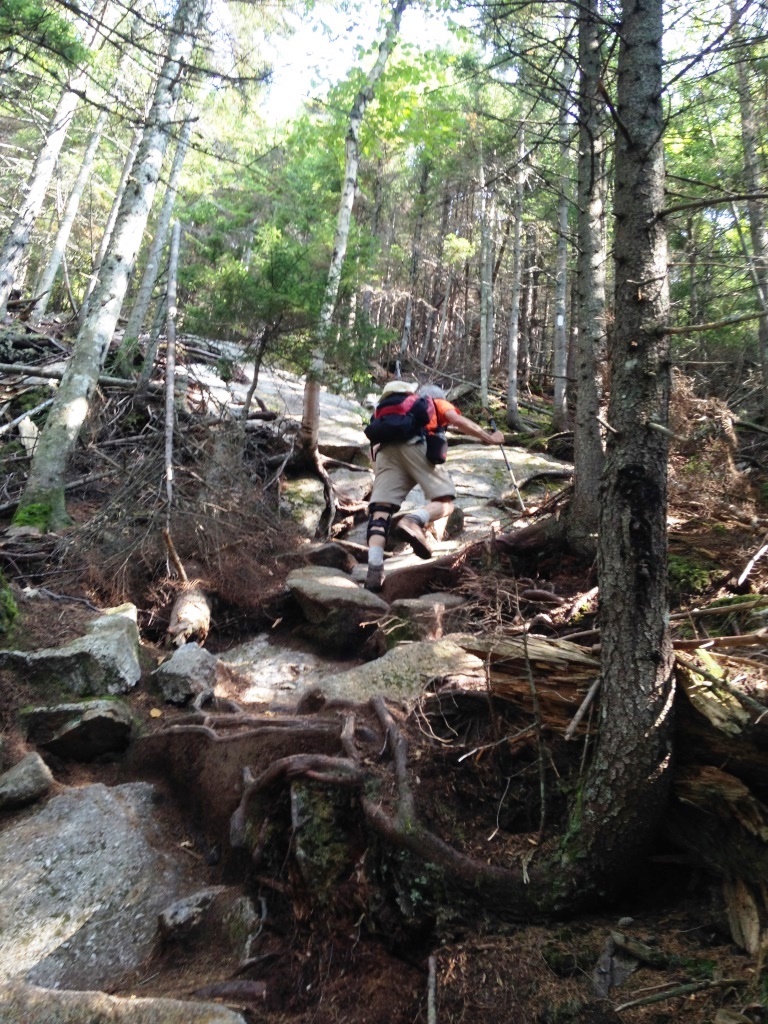 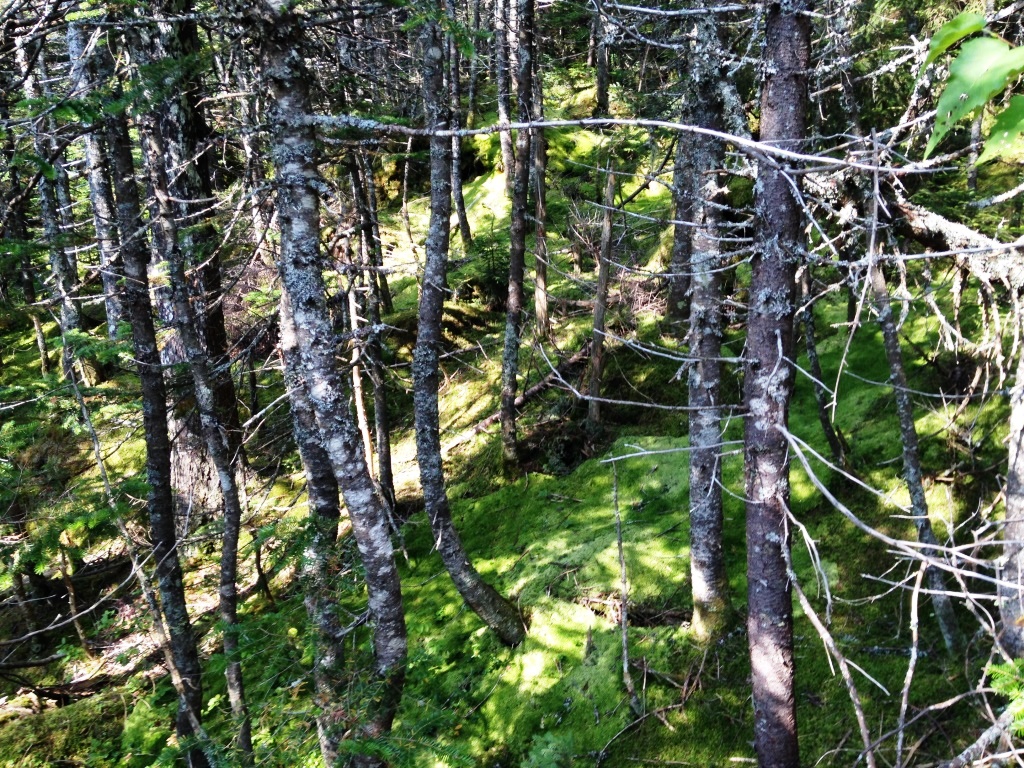 After that we were back at climbing again, up to Mahoosuc Arms at 3,770 feet. I was drained after the Notch and it took me a while to get my mind back into climbing. The climb was moderate at first but soon became exceedingly steep over smooth rock (left). It required quite a bit of scrambling but the rock was good and there were trees and roots to hang on so it made the climbing fun and efficient and I really enjoyed it. It reminded me of the climb to Mt. Flume. In the upper reaches we were surrounded by beautiful moss forest (right). 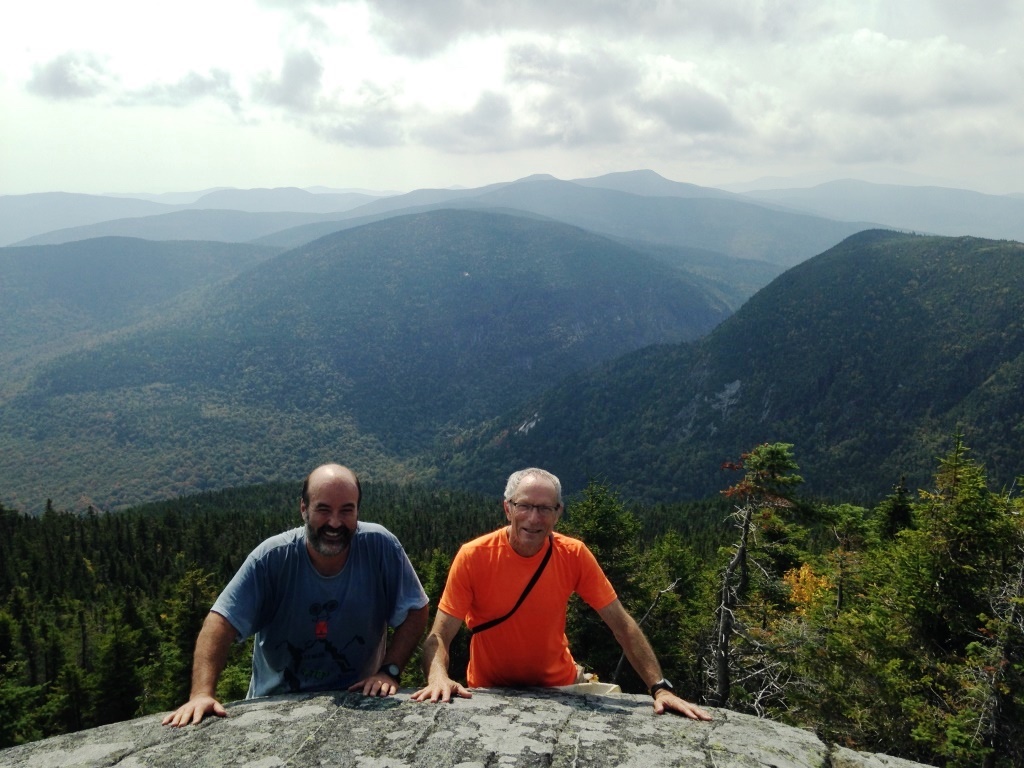 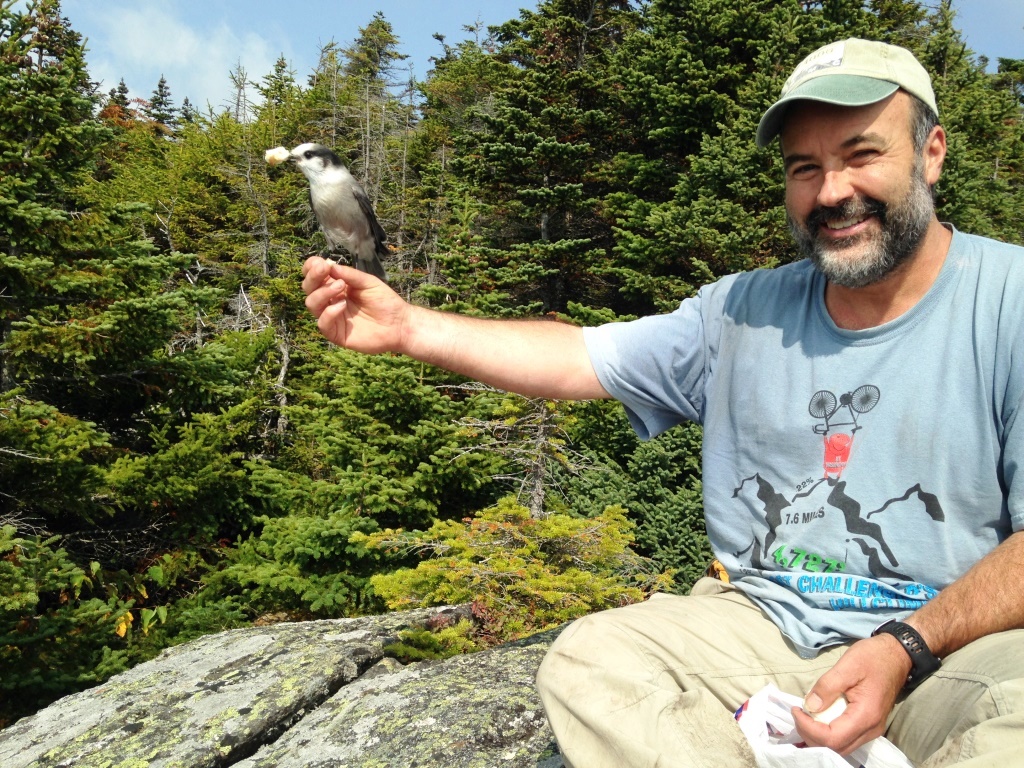 Near the top of Mahoosuc Arms was a ledge off to the right that provided a good view back towards the Notch (left) and in other directions. A friendly grey jay came by asking for food and we obliged (right). Then it decided to spend some time on Peter's hat (below left). Grey jays can be counted on to welcome hikers and their food at 4,000 feet in the fall - that's where they live and the fall is the time when they stash food for the winter. They are super-friendly and will eat food out of your hand but they're not annoying in any way - when you're done feeding them they will just hang around and be polite company. 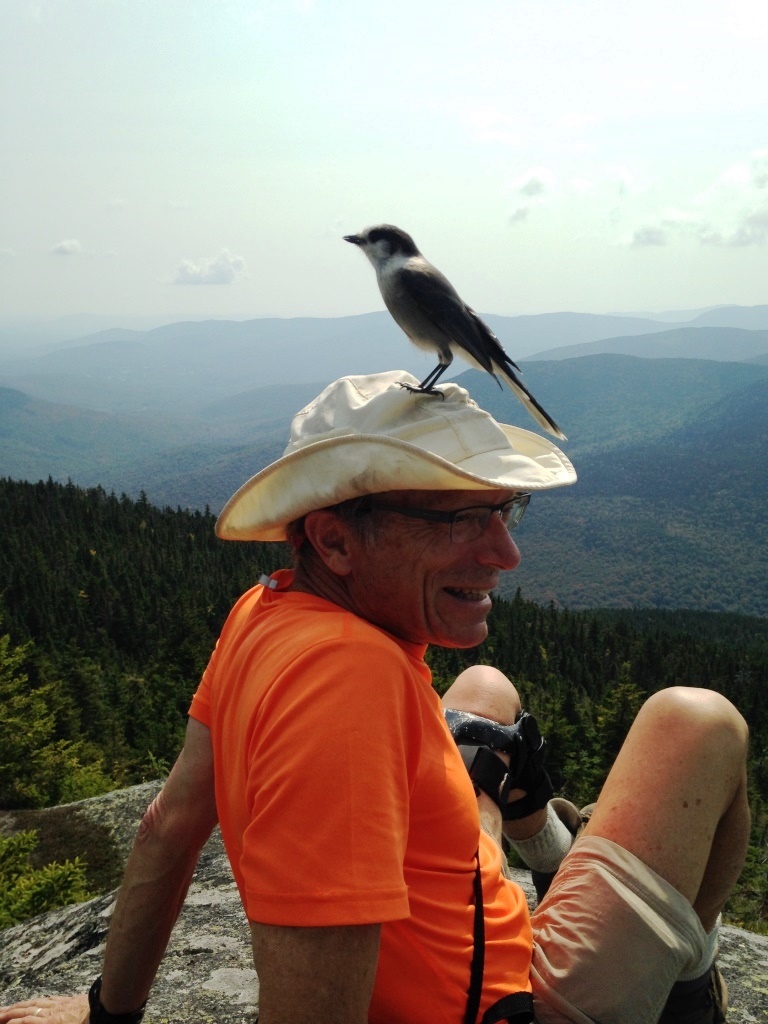 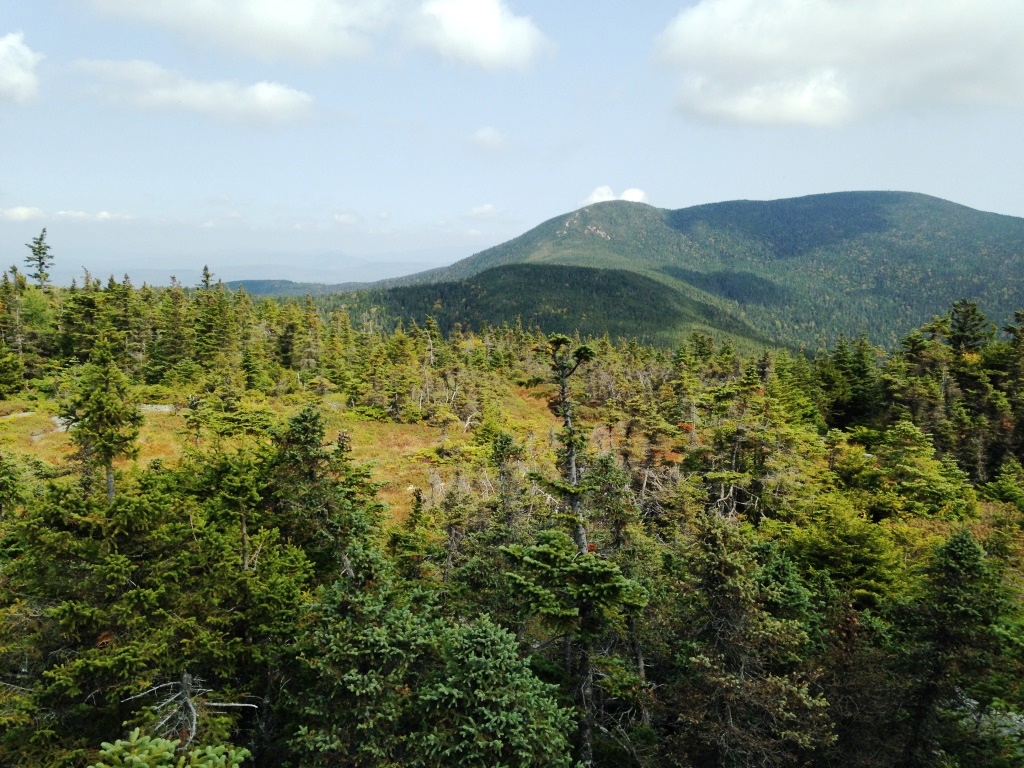 Combing back to the trail we quickly got to the flat plateau of Mahoosuc Arms. We ignored May's cutoff which is supposed to take you to the official top and instead continued on the AT which wandered to the right on the semi-open plateau, a nice respite from the climb. The trees were stunted and there were many fine outlooks, such as the one at right looking out to Old Speck. But what I enjoyed most were the bog bridges that took us effortlessly across the swampy areas, with a beautiful mix of vegetation (below left). 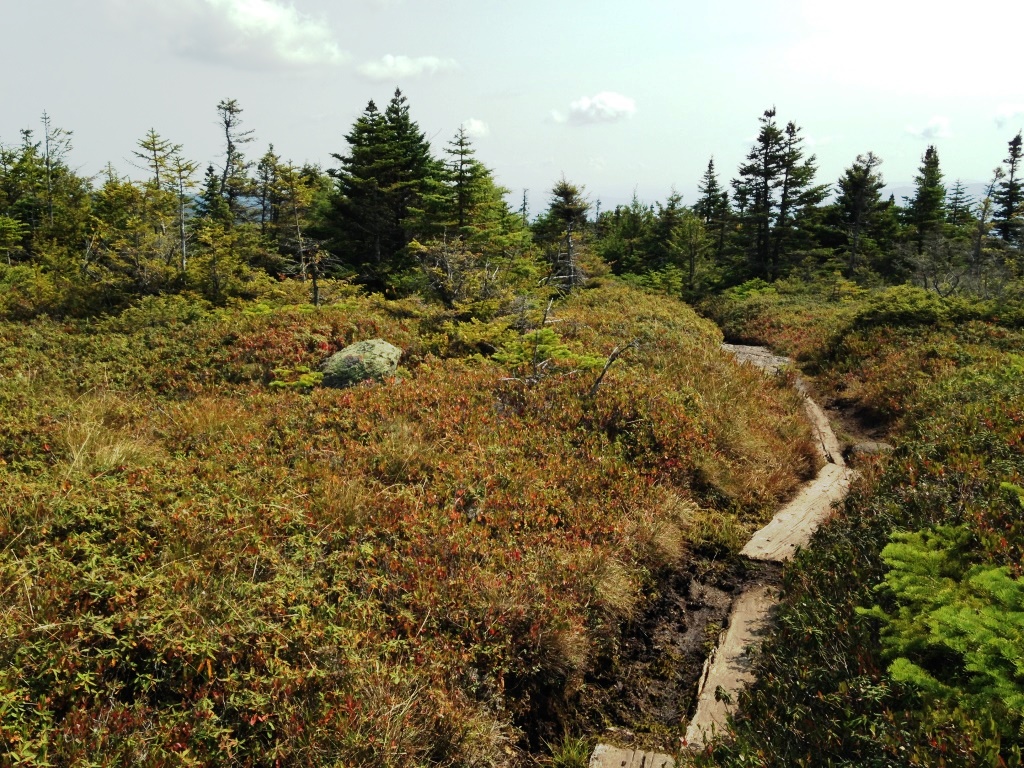 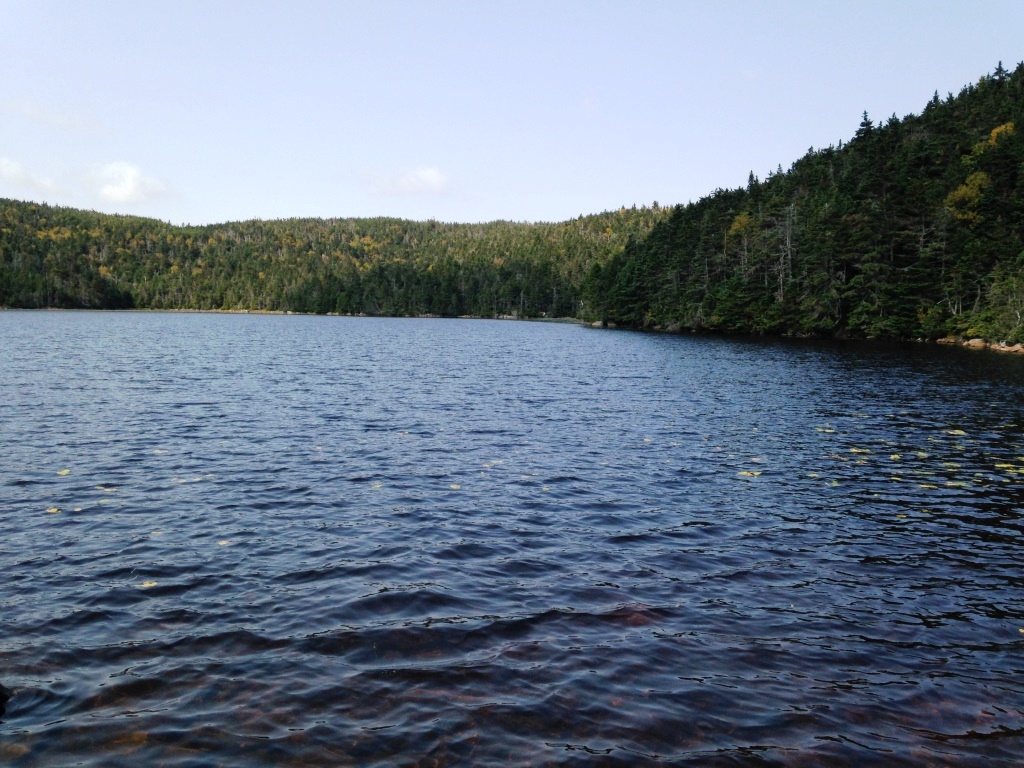 From there we headed down to Speck Pond at 3,300 feet, a short and steep descent that delivered us to the pond outlet (right). There was a family there that had climbed up Speck Pond Trail with an inflatable dinghy and was having a good time floating around and fishing. Speck Pond is a beautiful deep pond ringed by trees, and is one of the highest-elevation ponds in Maine. 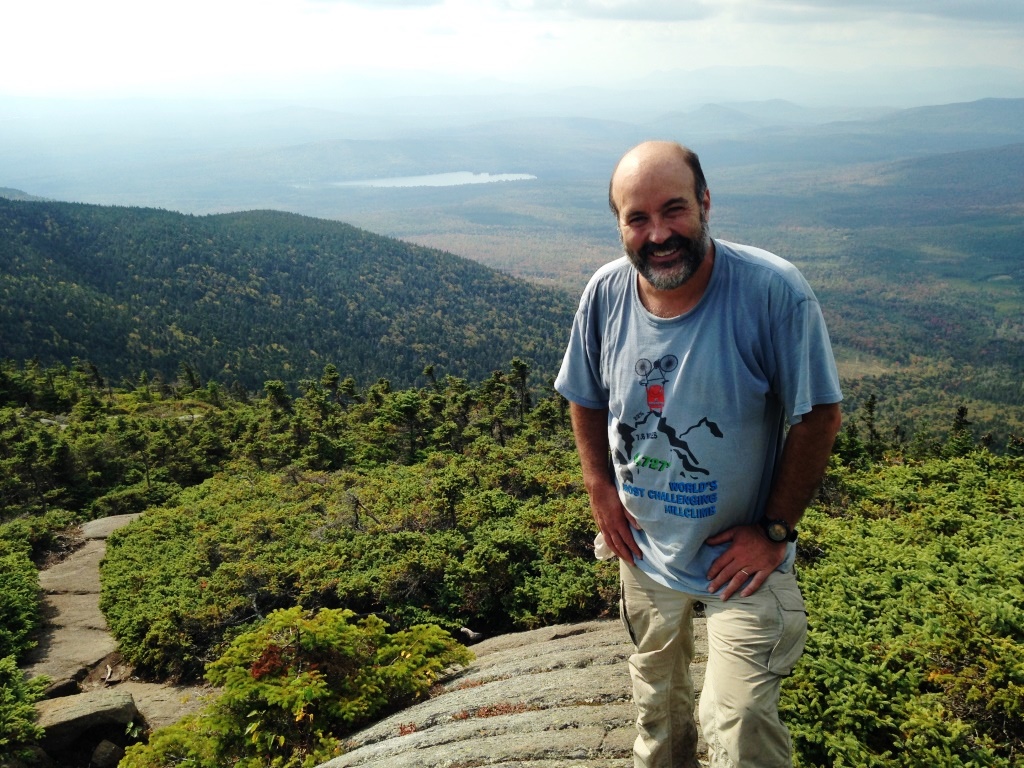 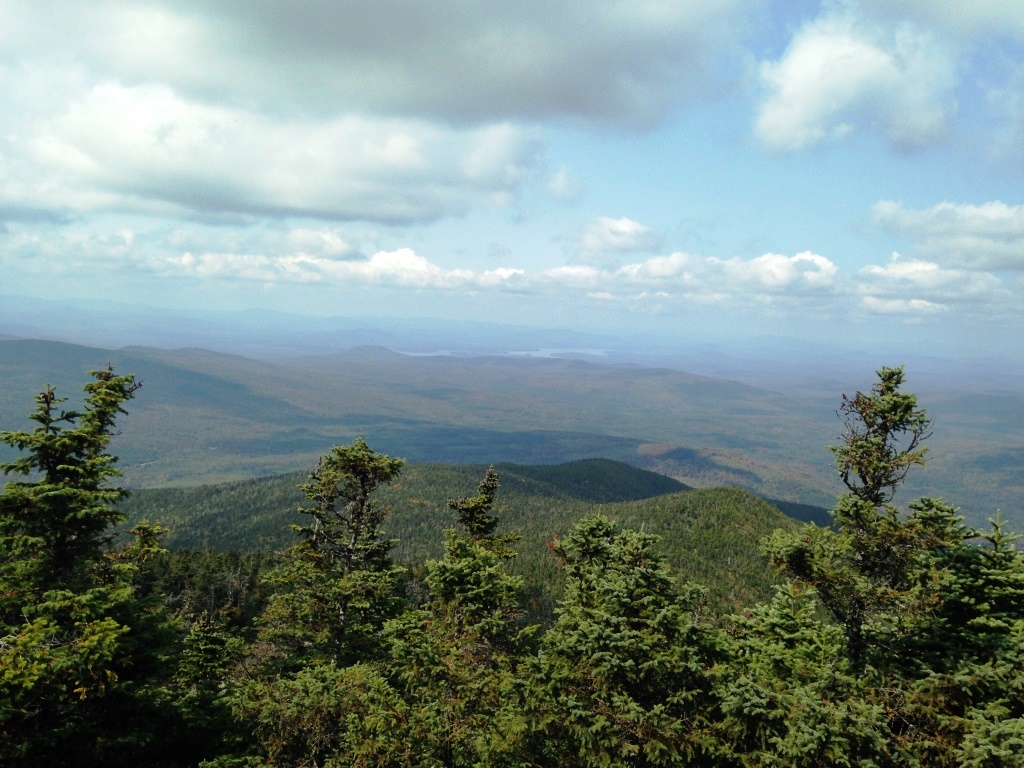 And it was on back up to Old Speck on the other side of the pond, at 4.120 feet the third-highest mountain in Maine. We had to go over two minor humps before actually climbing Old Speck, and the footing was rough, so it's a harder climb than it seems. But the actual climb up the open ledges on the left side of Old Speck was really nice (you can see these ledges in the view from Mahoosuc Arms shown above). It gave us great views to the North over what is completely unpopulated country, owned by the lumber industry and bless them because they keep the land accessible and well-managed for many uses. We had a great view of Success Pond (left) and a hazy view of Lake Umbagog in the far distance (right). Janice and I had a great time kayak-camping in Umbagog last summer. The trees were starting to change down in the lowlands, with lots of red maples among the greens. 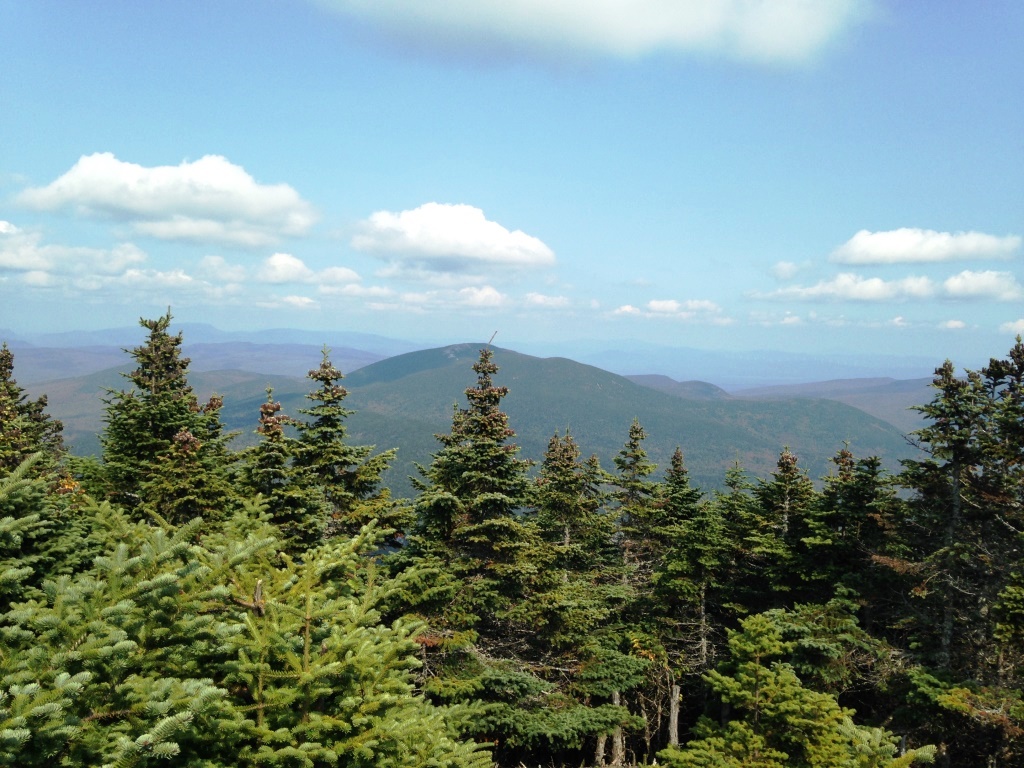 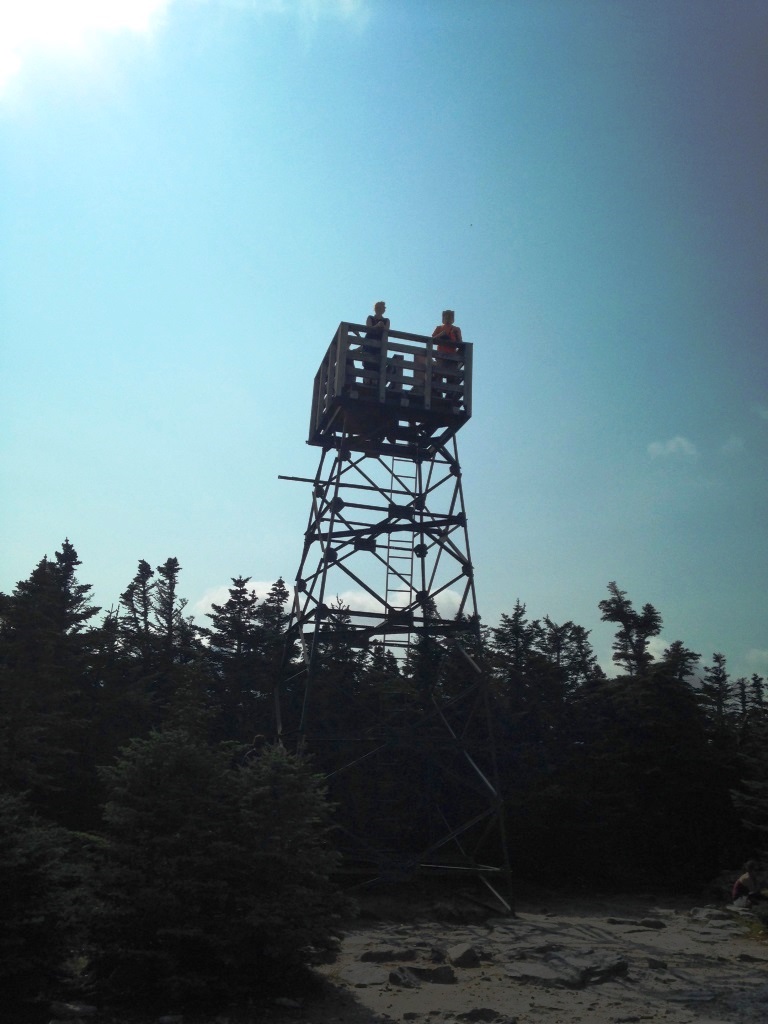 From the ledges it was back into the forest for the final climb to Old Speck. At some point we left the AT that was headed down to Grafton Notch and made for the flattish summit on a gentle grade. We were surprised to find a large crowd of college kids at the summit - it is a fairly short climb from Grafton Notch. The summit itself is not great - it had recently been cleared but the trees were growing back fast and there was only limited view to the north towards Baldpate Mountain across Grafton Notch (left). There was an observation tower (right) and Peter went up for a view but the ladder was of the kind that you don't want to look down and I didn't think the hazy views would be worth it. Peter kindly reported to me that it was indeed not much more than we had already seen. 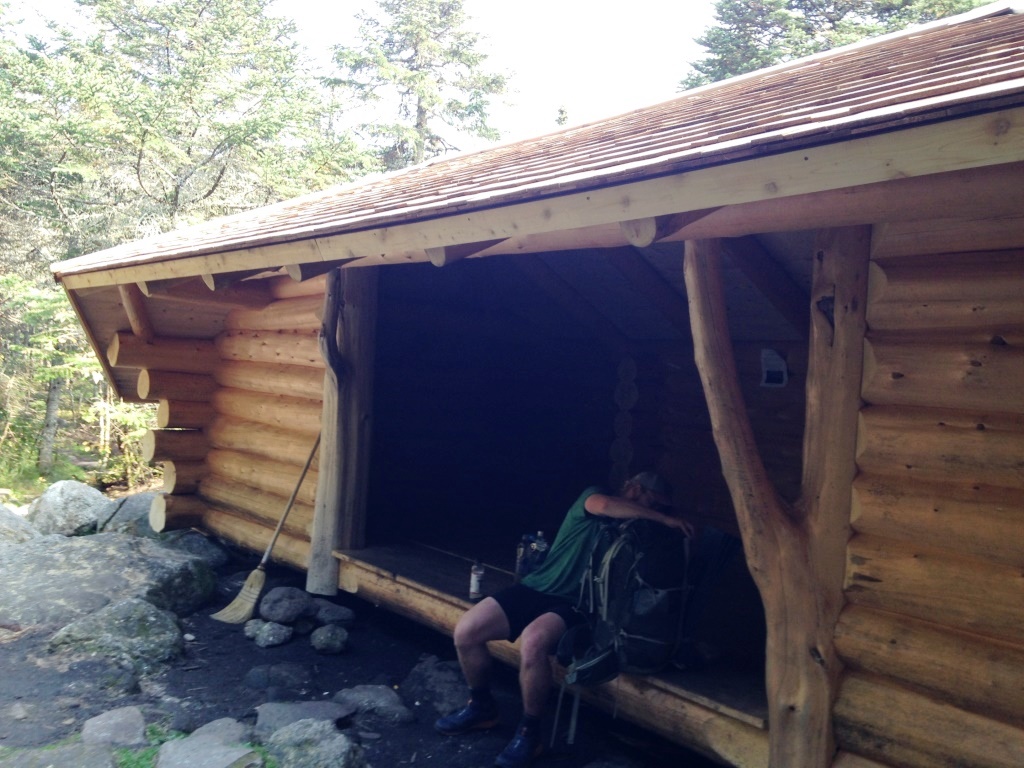 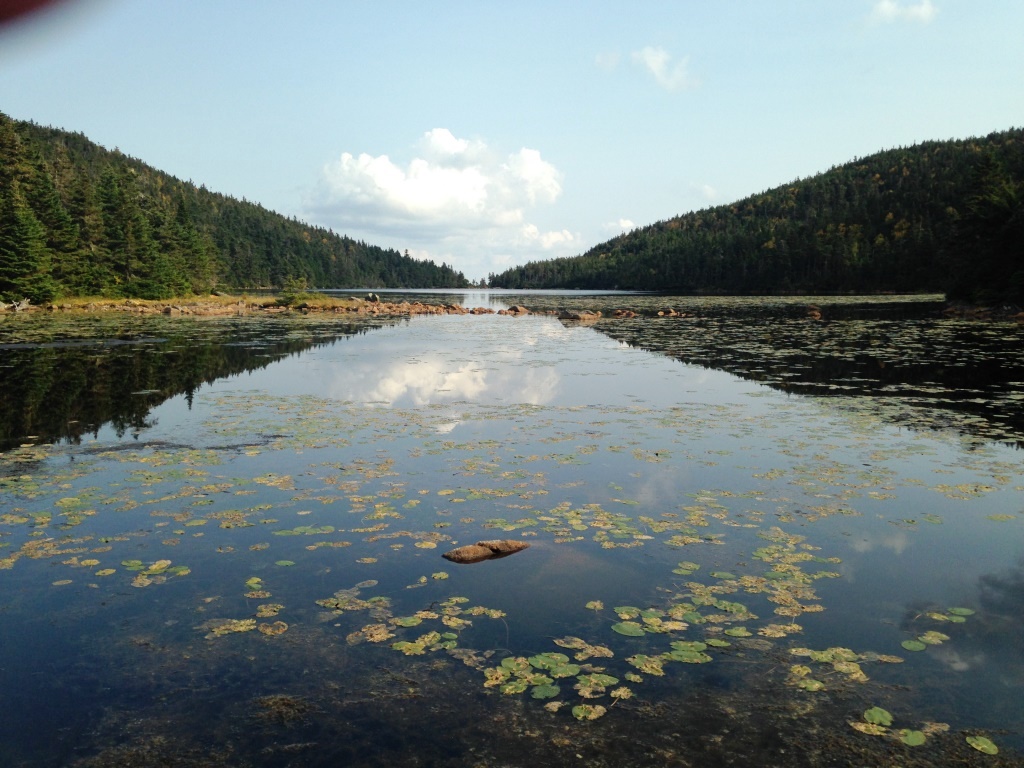 We didn't hang around Old Speck too long because of the crowd, and instead went back to hang out a while on the previously mentioned ledges where the view was much better and there was no one around. Back at Speck Pond we checked out the brand new shelter (left) and enjoyed a final view of the pond (right) before heading up on Speck Pond Trail. We were not quite done with climbing as we had another 350 feet to get out of the pond basin. 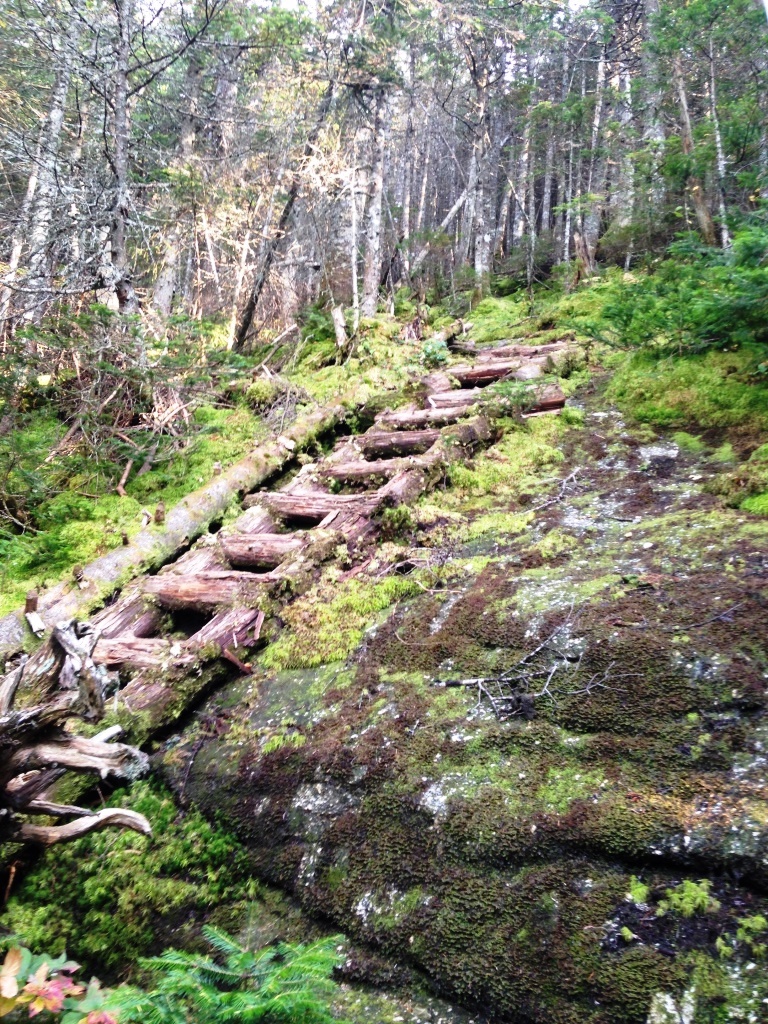 t the top of this final climb (3,600 feet) we met up again with the May cutoff. We still had some spring in our legs se we went up to get to the actual top of Mahoosuc Arms. May cutoff was a really nice trail in mossy forest (left)) and in 5-10 minutes took us to the top, which was a cairn on a flat ledge surrounded by spruce with no views. We headed back down for the final descent. Speck Pond Trail was rough and unexpectedly wet down to about 2,800 feet and then it became an enjoyable walk in the woods. I was surprised to find at some point a rotting ladder (right), first I have seen in the Whites - generally the whole point of ladders is that they be sturdy but this one was more a conveniencec than a necessity. Going down we really enjoyed the wild open forest maintained by the periodic logging of the lumber companies. Two small brook crossings and we finally emerged on Success Pond Rd. for the 45-minute walk back to the car - a pleasant walk in the evening light dramatizing the early foliage.