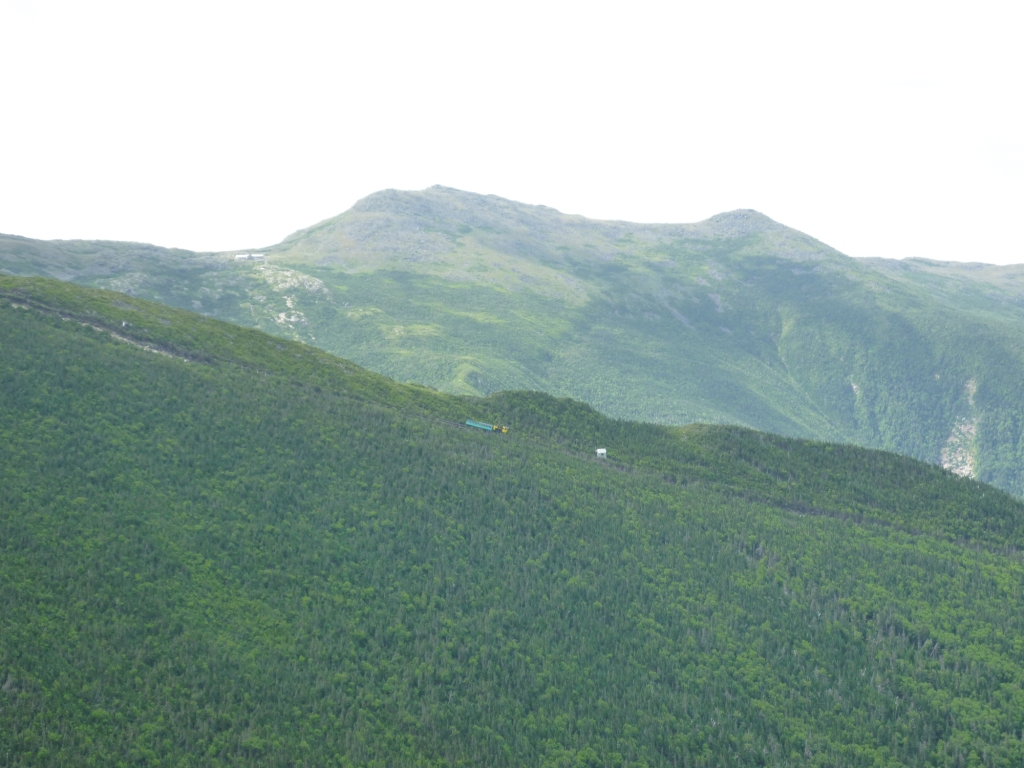 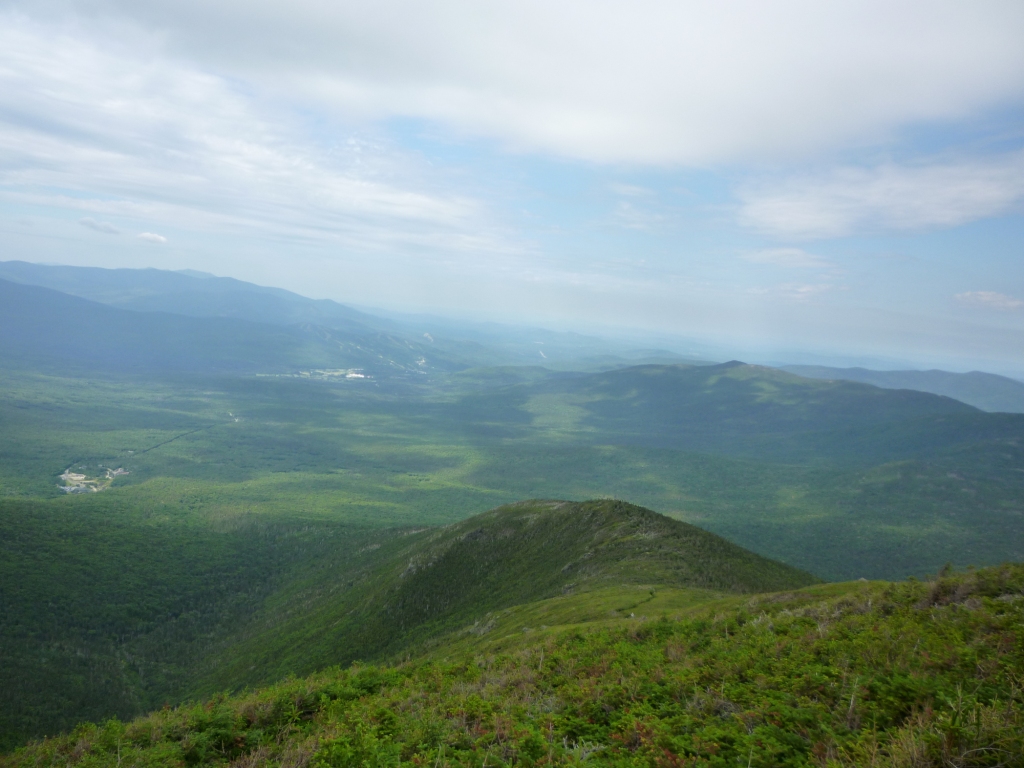 Climbing Mt. Clay is starting to become familiar. As AMC Trail Adopter for the Mt. Clay Loop I have to go there three times a year to fix cairns, build scree walls, and do other trail maintenance. I had already been there once this season and built a small scree wall on the South Peak where the trail was poorly defined. But a few weeks later I got an email from my AMC Trails Coordinator saying that the wall was in shambles. So now I was a man with a repair mission on hand. Roger Gagne was kind enough to join me. We climbed the Jewell Trail, which is the easiest way to get to Mt. Clay and very nice. At 4,300 feet we broke out above tree line and from there the views were on. The Cog Railway was busy that day ferrying tourists to and from Mt. Washington (left). Looking back east we had a view of the ridge climbed by the Jewell Trail, with the base of the Cog to the left and Bretton Woods in the distance (right). From the Presidential Range the Bretton Woods Ski Area looks so diminutive and flat - no wonder the Attitrash kids call it Pancake Mountain, but then Attitrash is pretty low and flat too. 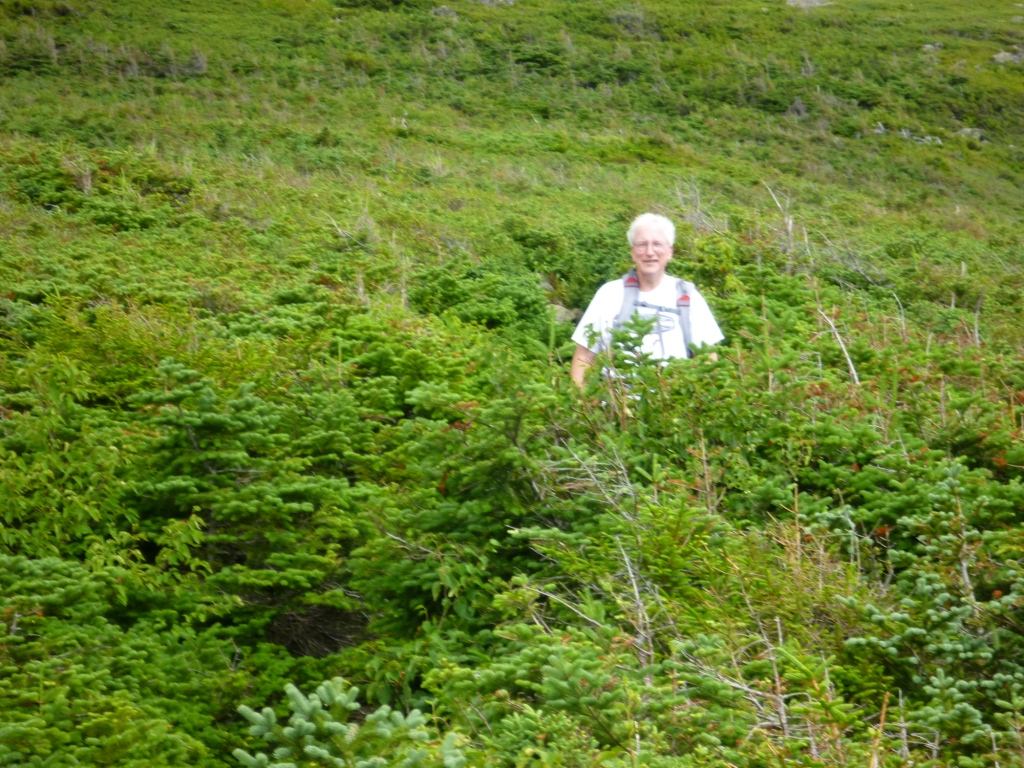 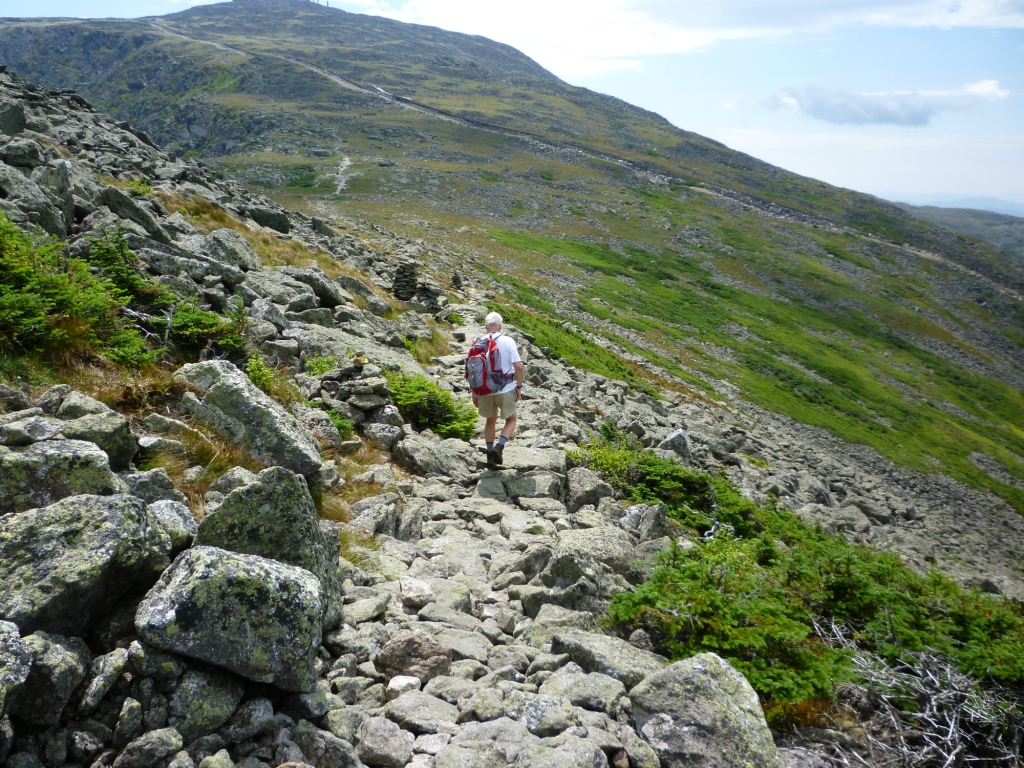 Above treeline the Jewell Trail becomes much rougher but never too steep. There is a wonderful stretch where you walk in a sea of stunted trees (Roger at left). Today was Seek the Peak Day, a major fund-raising day for the Mt. Washington Observatory with folks getting sponsors to climb the mountain. So we were not alone on the trail, as became readily apparent above treeline. At 5,300' we reached the Gulfside Trail, which is the boulevard heading up to Mt. Washington. Some parts of the Gulfside Trail are so well constructed with flat stones as to resemble a roman highway (right). 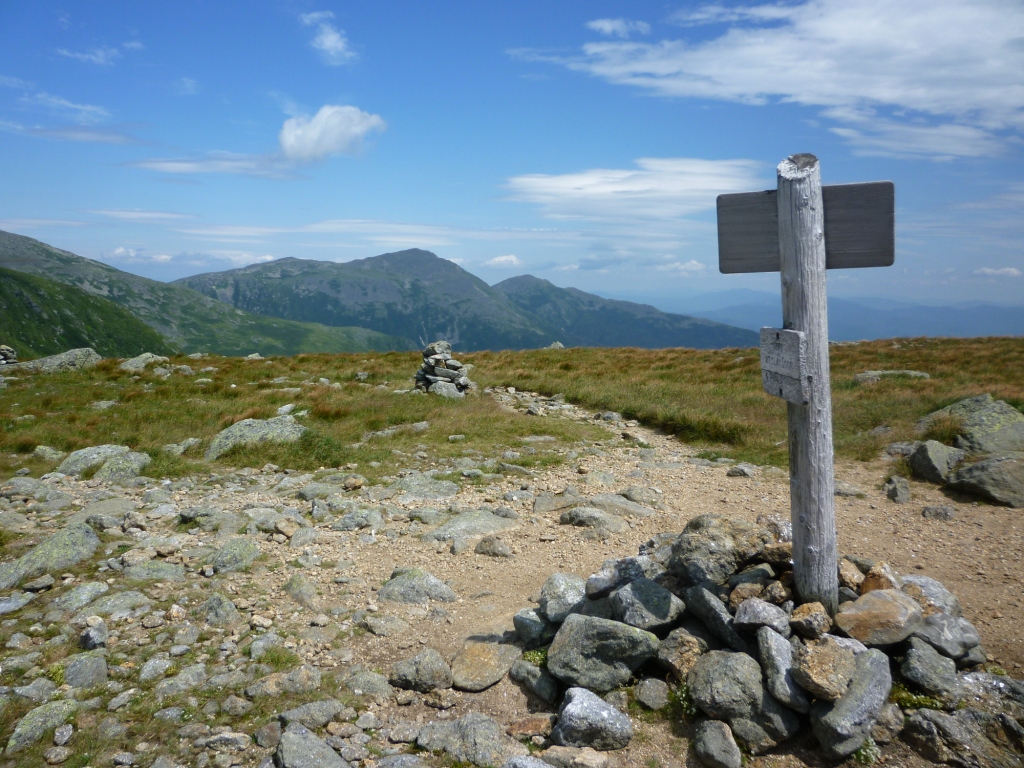 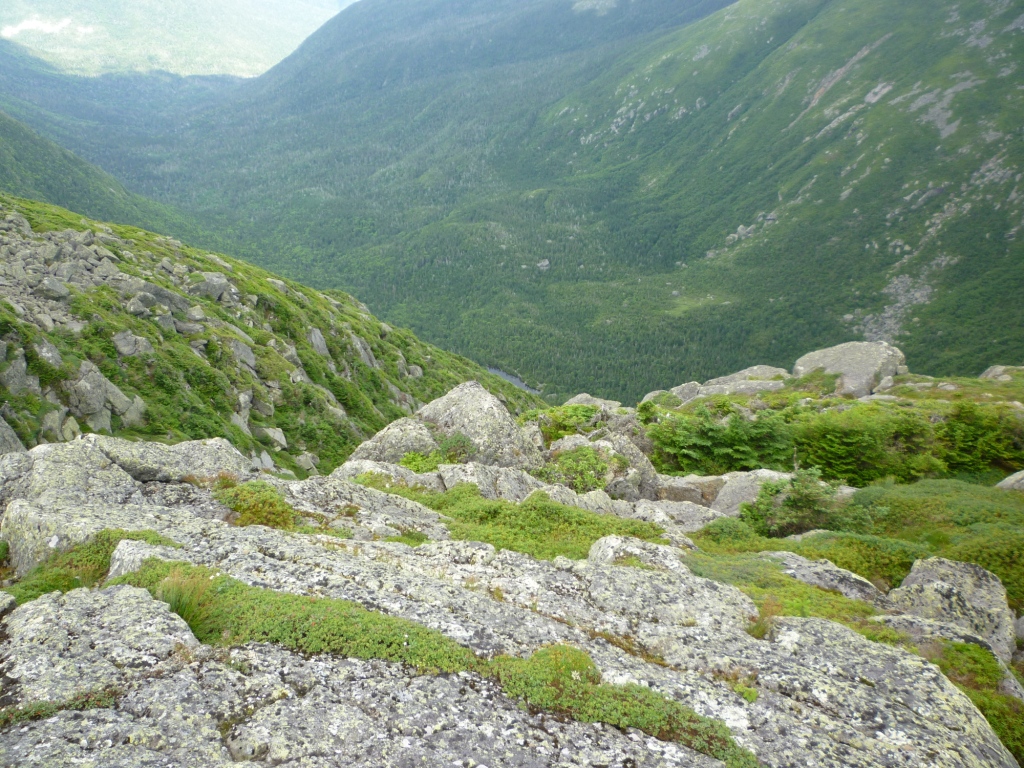 In this manner we reached the southern end of the Mt. Clay Loop (left), got on the Loop and left the crowds behind. The Mt. Clay Loop is one of the most beautiful trails in the White Mountains (don't count on me to be objective). You can get a compilation of views from my previous hikes up Mt. Clay. Today was hazy but the views were still great, such as this one down the Great Gulf (right). It was very hot in the valley (90oF) but here the A/C was blasting - winds were 30 mph and temperatures were in the sixties. We were very thankful for this! 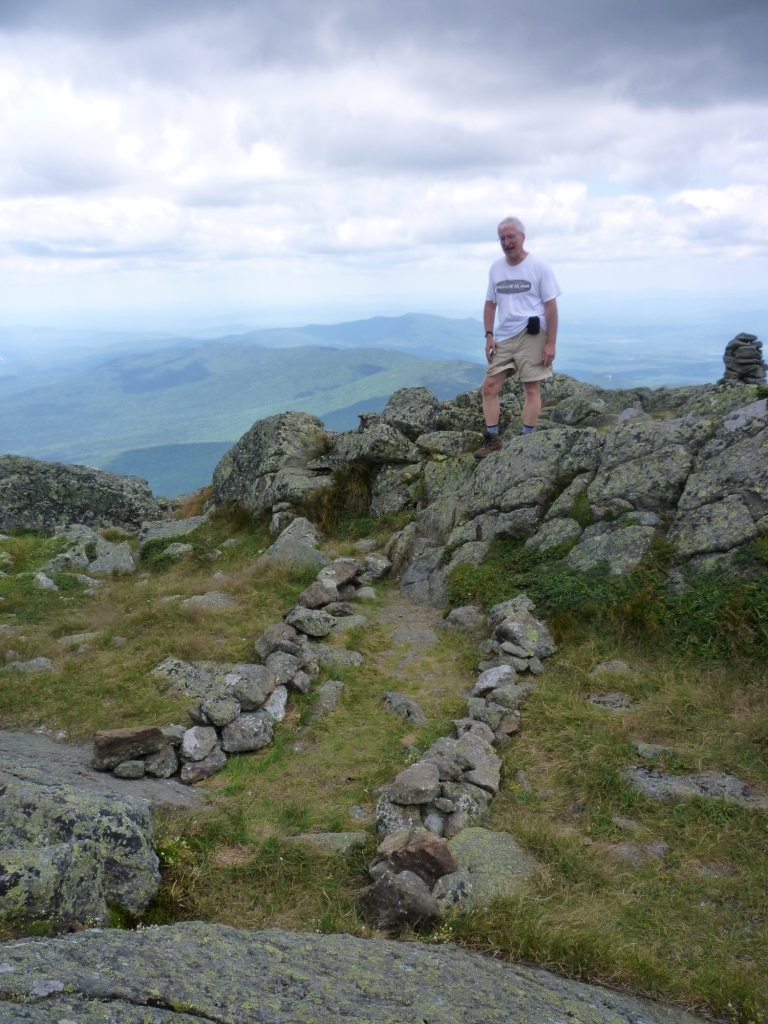 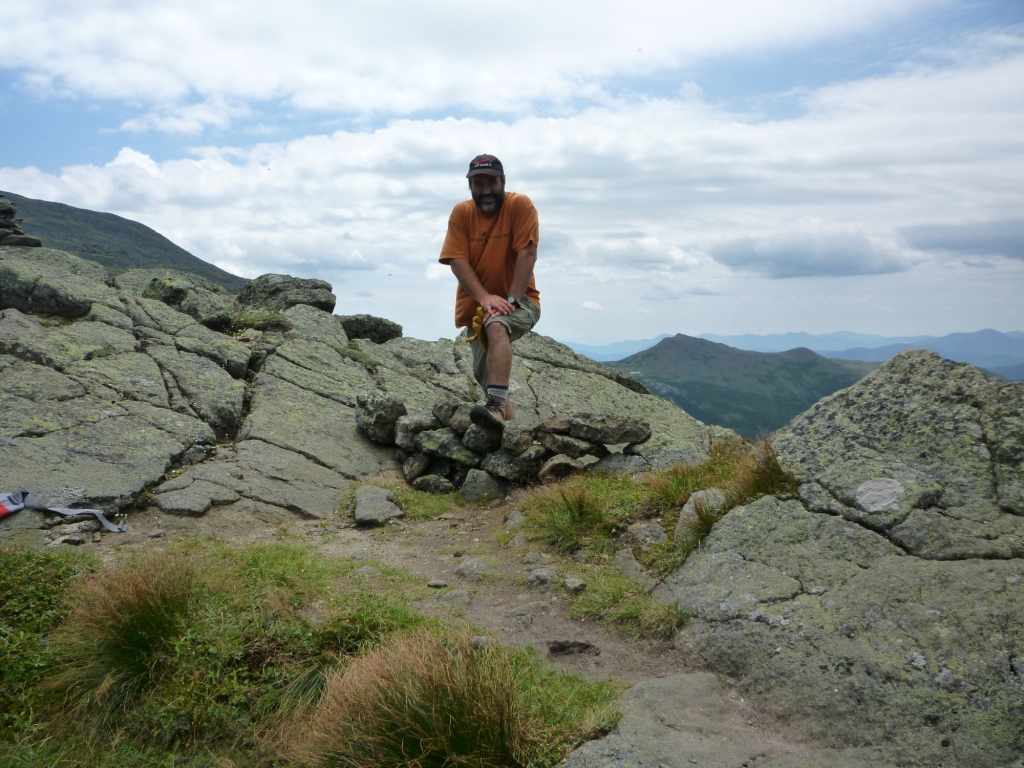 We got to the South Peak of Mt. Clay and saw the scree wall in ruins. We took a break for lunch and observed a few hikers passing by - indeed they were confused as to the location of the trail, much to the dismay of the local vegetation. So we set to rebuild the wall, which is much easier than building cairns because you don't have to look for big flat stones. After an hour or so of work we got a good-looking scree wall (left) and also built a retaining wall to keep hikers on the trail (right). We hung out for a while, again watching a few hikers go by, and concluded with satisfaction that the confusion regarding trail location had been resolved. We continued to the end of the Mt. Clay Loop, going over the North (and highest) Peak and down to the northern junction with the Gulfside Trail. On the way down we saw some cairns in poor condition that will be a priority for fixing on the next visit. After that it was back from the Gulfside to the Jewell, involving a substantial climb, and down the Jewell back to the trailhead and the heat.