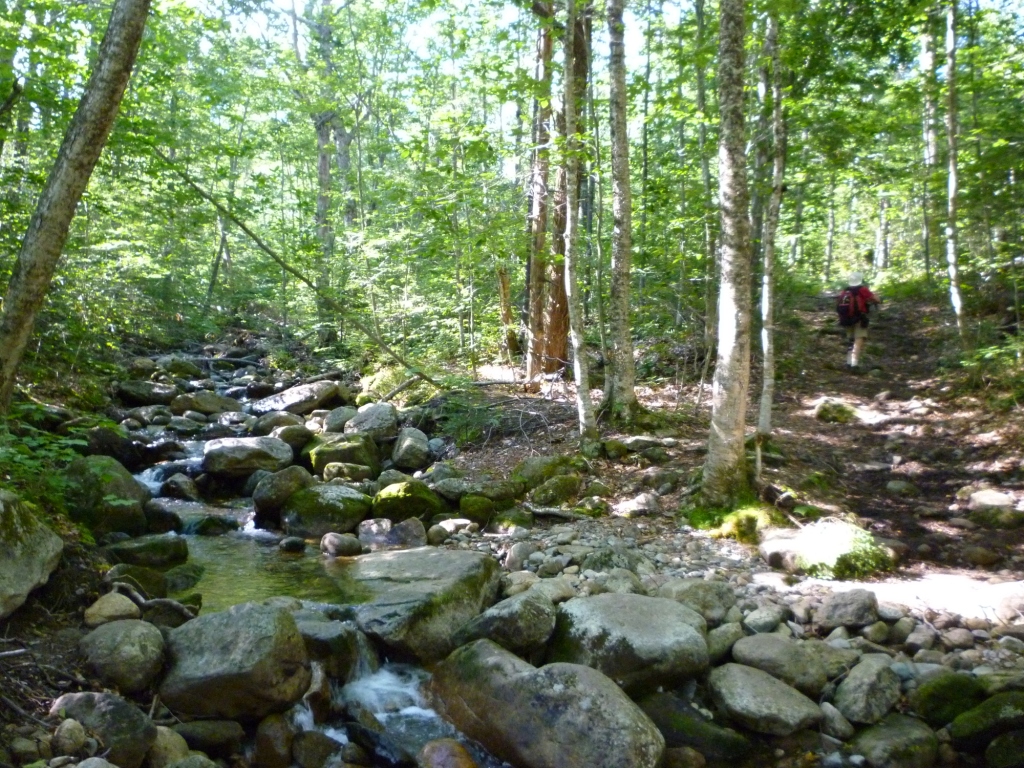 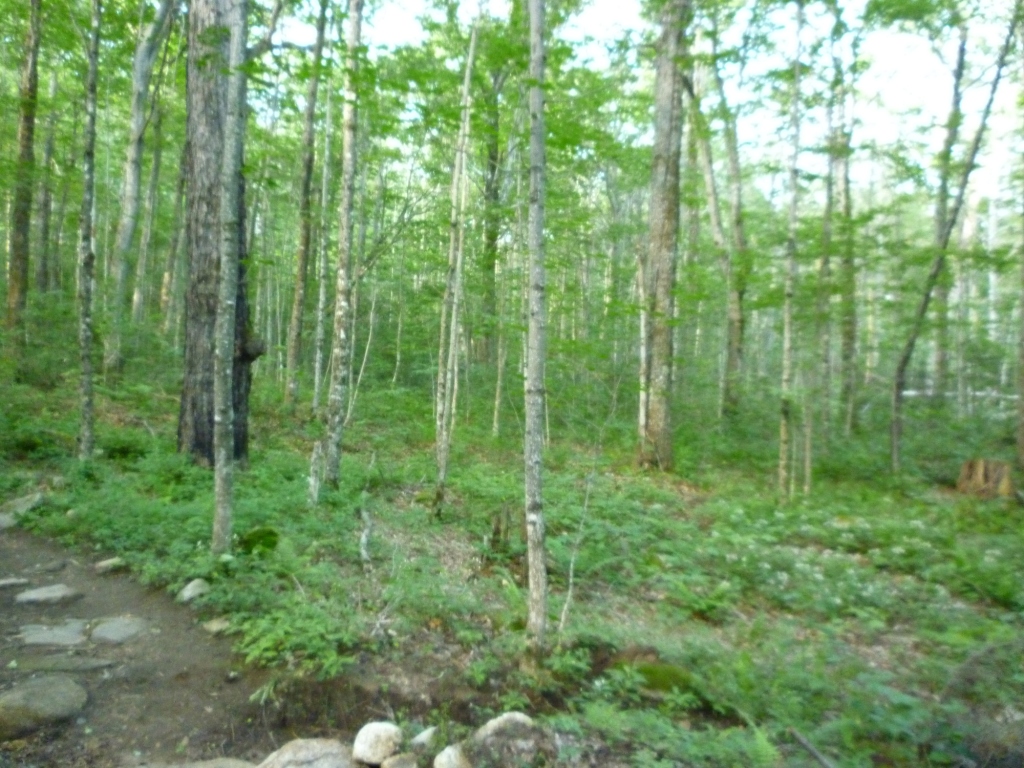 I had never done Mt. Garfield. Despite being a fairly high moutain (4,500'), its climb is described in the guidebook as a long trudge through the woods, with the single reward of a great view on top. But when I told Peter Wyatt that I had never been there, he was enthusiastic that we should do it, that the hike up was actually quite pretty and the view on top incredible. So off we went. I figured that since we were just going to climb in the woods the whole way I would document the change in the forest with elevation. The trailhead is at 1,500' and soon we crossed the Gale River (left), which must be a problem in spring. The forest at 2000' (right) was open with large hemlocks. 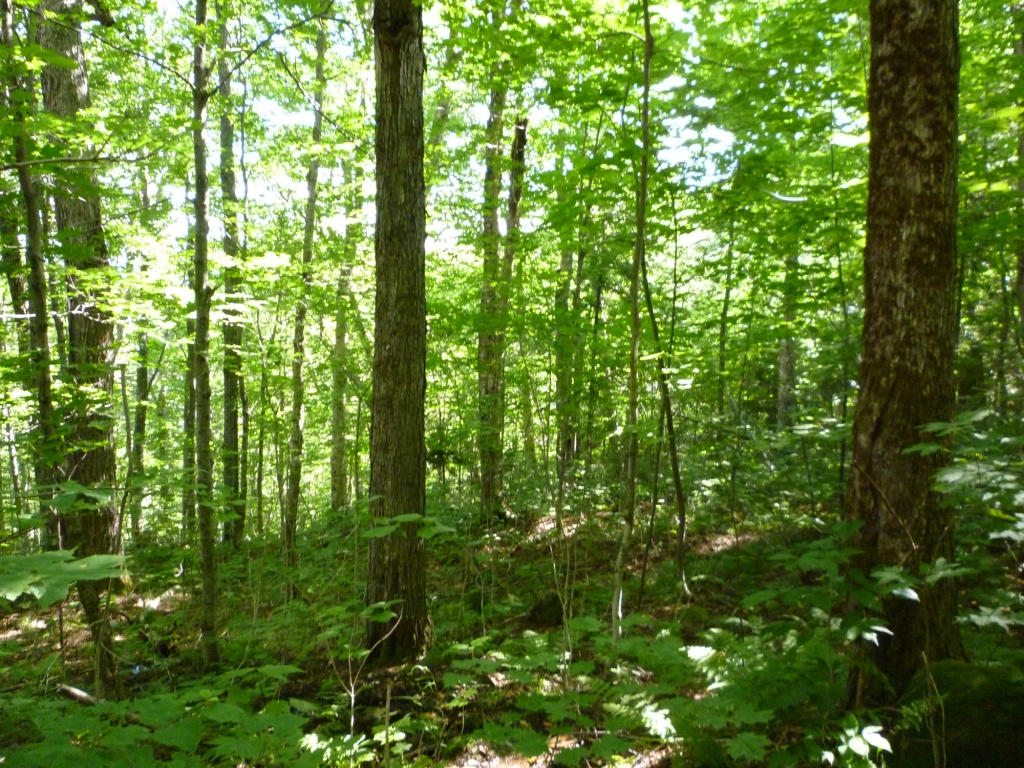 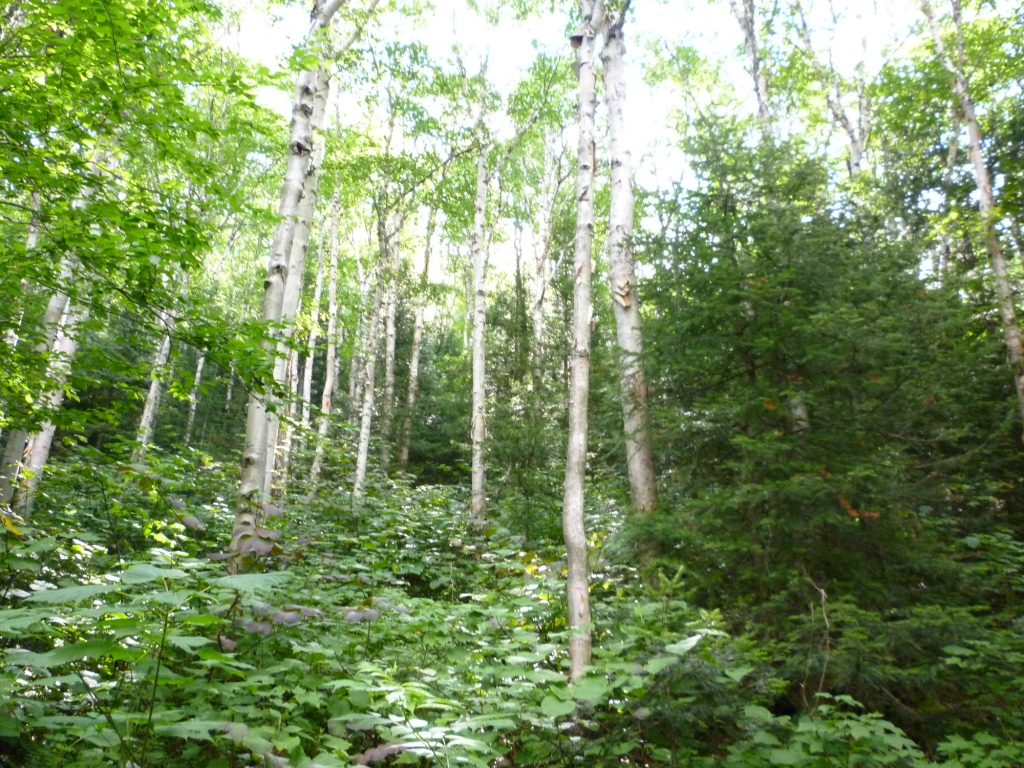 As we climbed up the hemlocks went away, and at 2,500' we had a maple and birch forest (left), still fairly open. At 3,000' the maples were gone and the forest started to get dominated by white birch (right), with trees getting noticeably smaller. 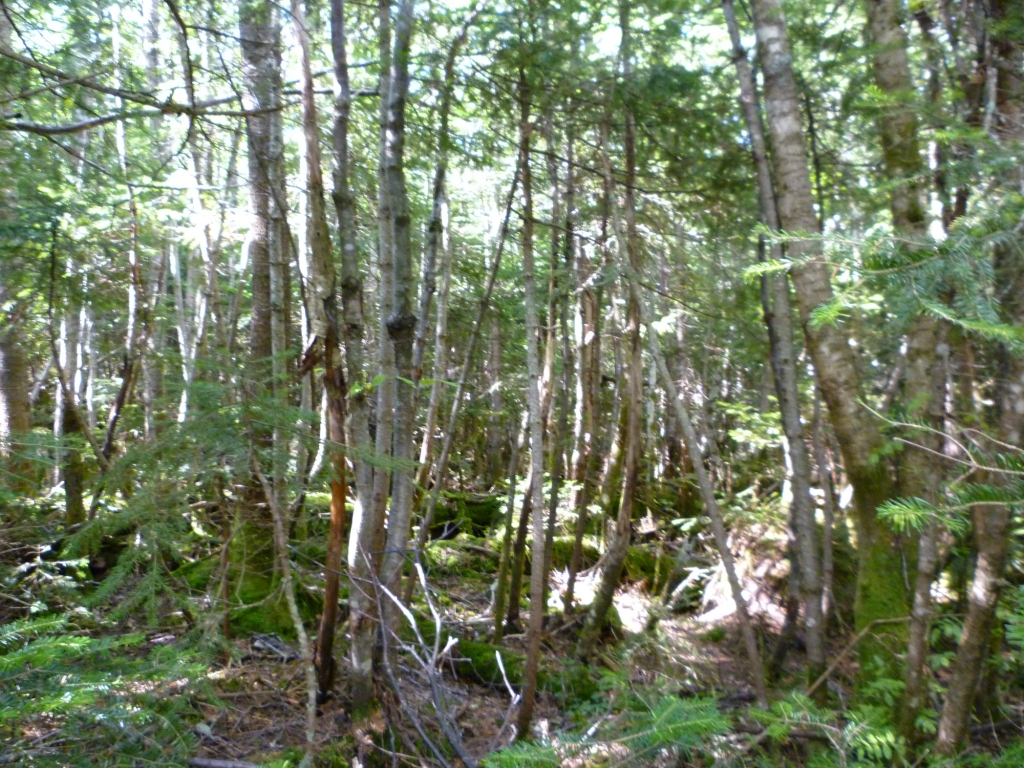 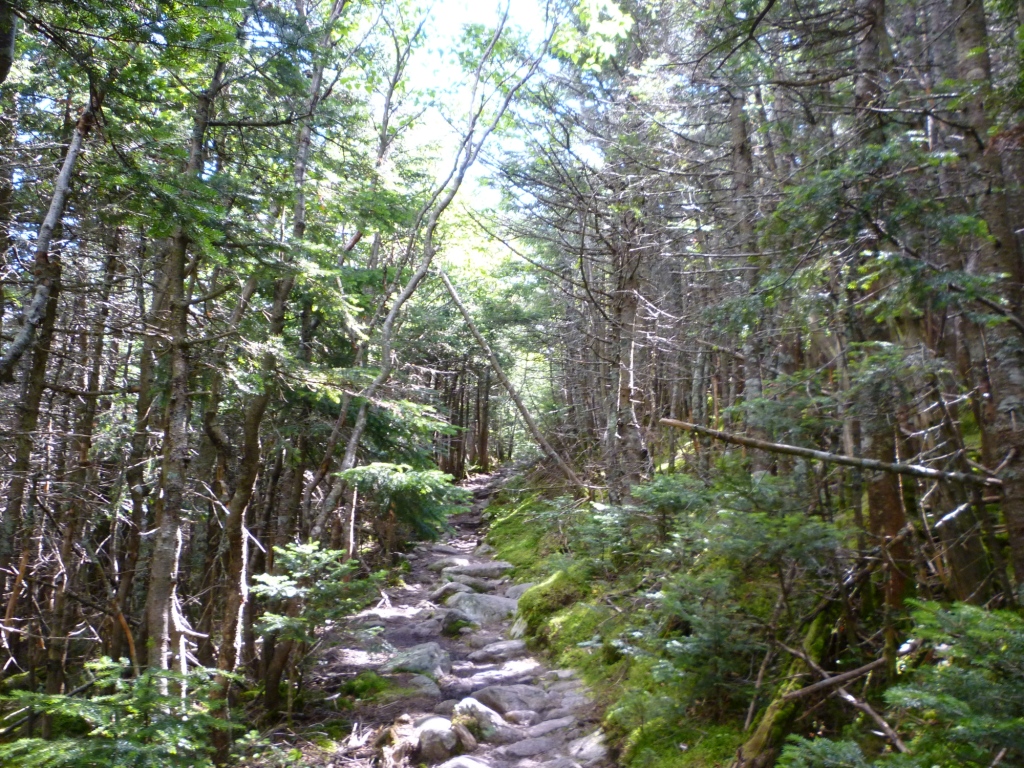 Climbing up to 3,500' the forest was now a mix of white birch and spruce/fir, stunted and dense (left). By 4,000' the spruce/fir dominated and the forest was closely packed (right) - no way to veer off the trail! Still very little in terms of views, except for some blowdowns. But the well-graded, regular climb and the ever-changing forest made the hike much more pleasant and interesting than I would have thought. 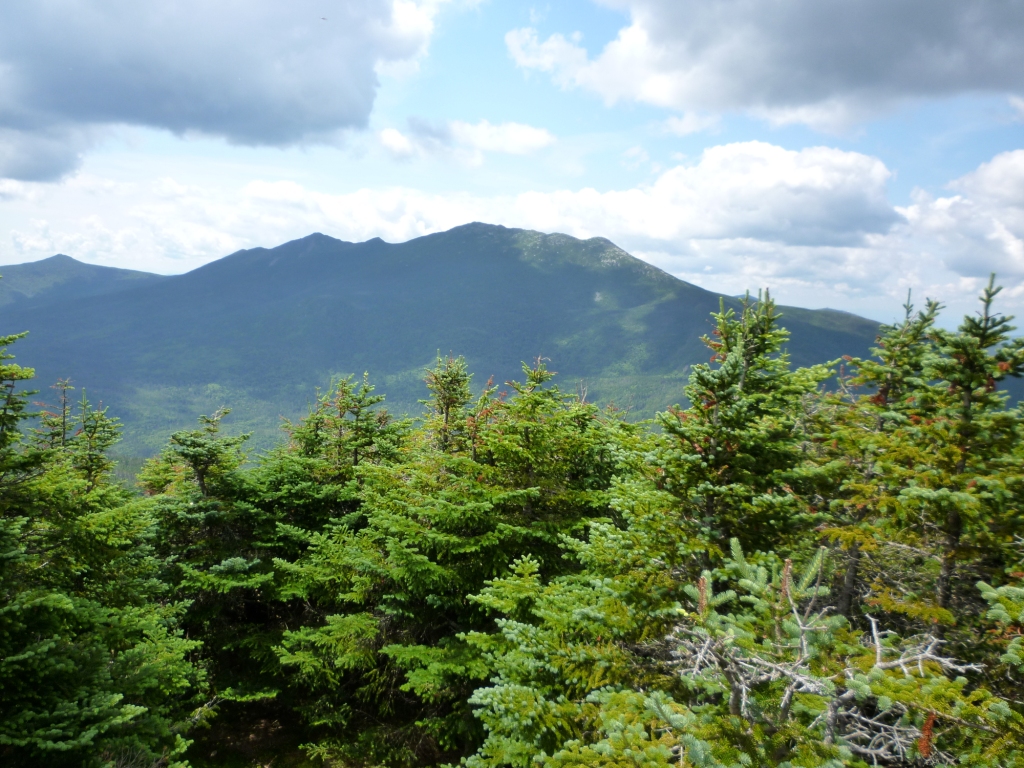 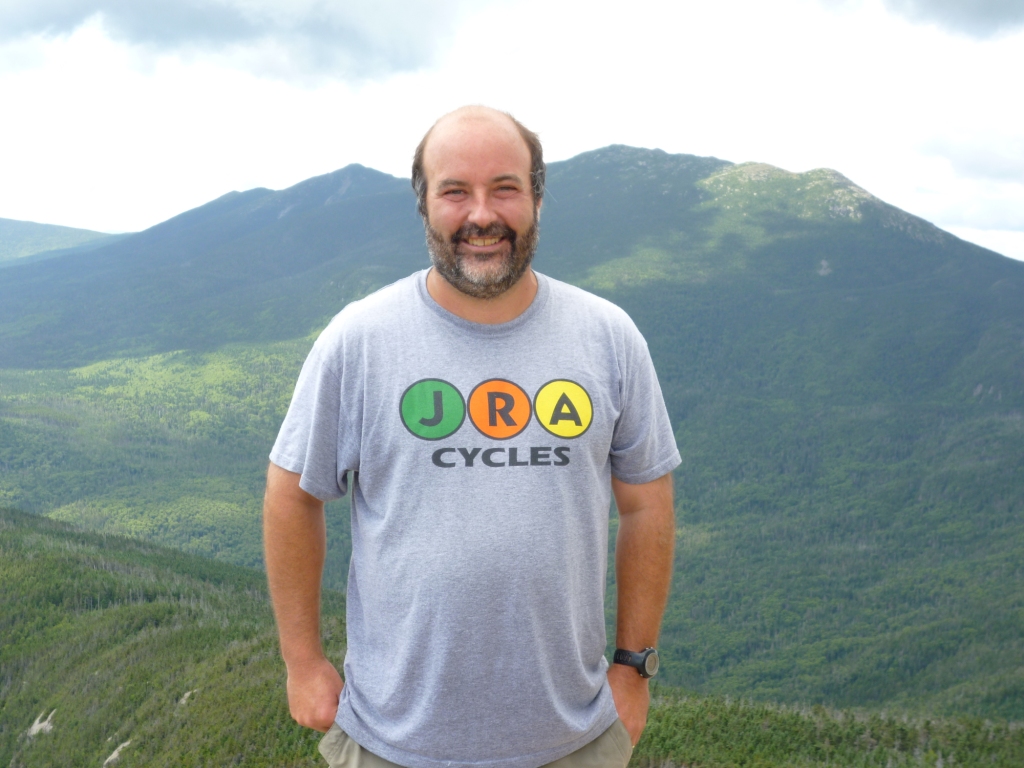 The Mt. Garfield Trail meets the Garfield Ridge Trail at 4,200' and from there it's a short steep climb to the summit. As you reach the summit the Franconia Ridge comes into view (left) and it was a beautiful sight. I posed to advertise the local bike shop in Medford (right). 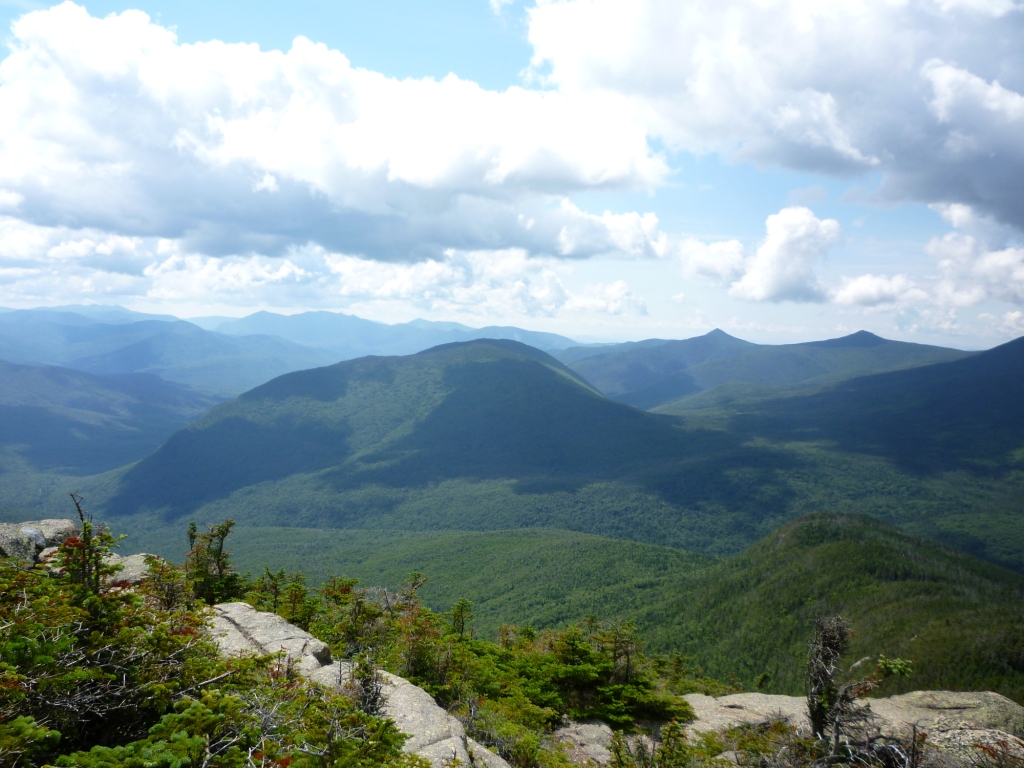 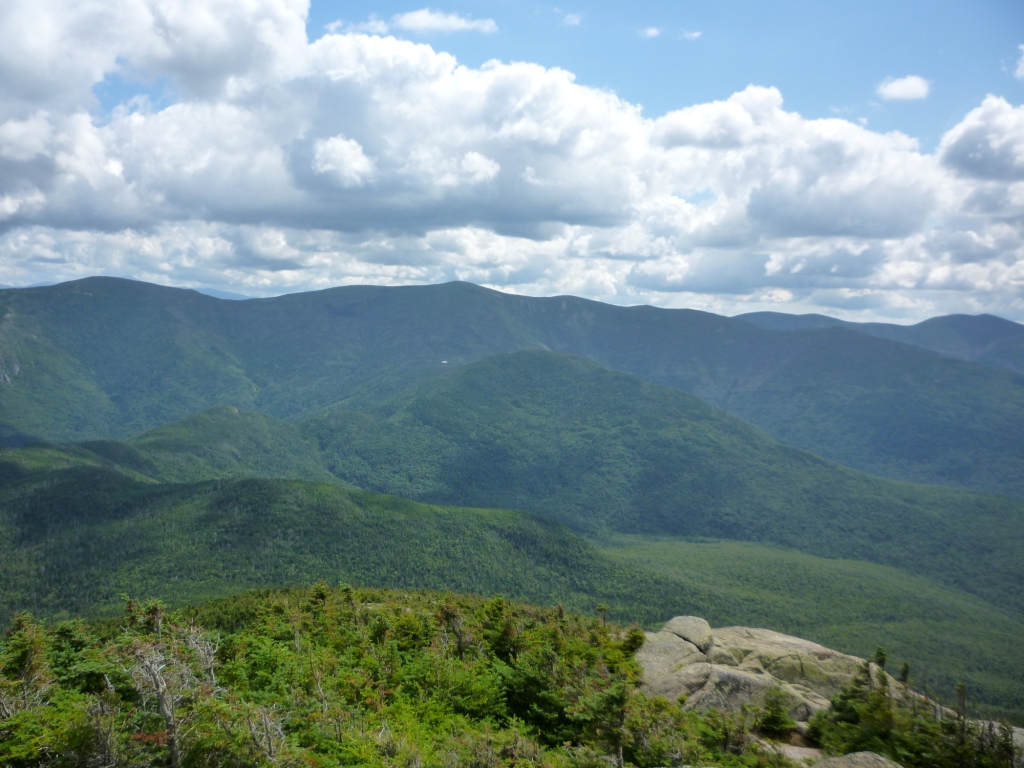 The 360o view from Mt. Garfield is advertised as magnificent, and indeed it is. It offers a unique perspective on Owl's Head to the south (left), floating like a boat between the Franconia Brook and Lincoln Brook valleys, and with the graceful peaks of the Franconia Ridge to the west. Looking east (right) is a great view of the Bonds and the Twins, with Galehead Hut as a speck in the distance (click to enlarge and see the Hut in the middle of the picture, just below South Twin). Before coming back down I suggested to Peter that we go check out the Garfield campsite, shown as just 0.2 mi. away on the map. So we did, but it turned out to be a back-breaking 300 ft descent followed by a 100 ft climb on a spur trail, so we ended up adding 400 ft elevation to the climb for ...just a campsite. Peter asked, "Any other bright ideas?" My son Alex had camped at the Garfield campsite last summer and had told me that the Garfield Ridge trail to get to it was the worst of his 10-day backpack - and from the little stretch that we did I see absolutely what he meant!