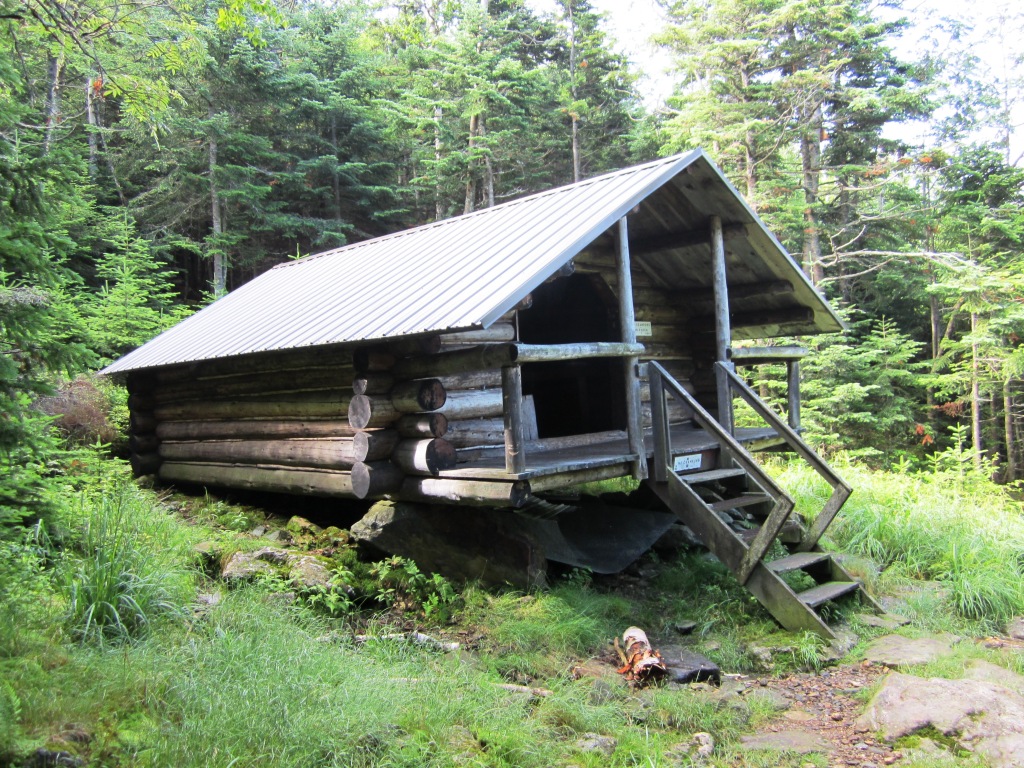 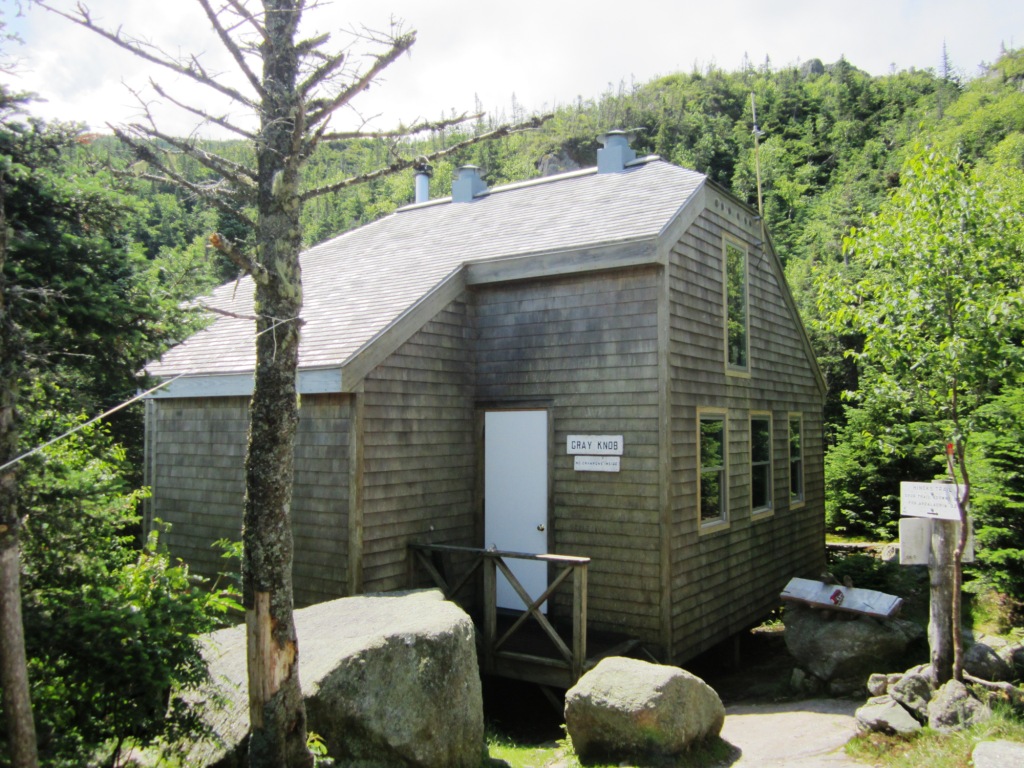 Lowe's Path up to Mt. Adams starts at Lowe's Store (1,375'), where the trail guide says that you have to pay to park. When Roger Gagne and I pulled in at 7:30 there was just one other car in the dirt lot. We asked the lady in the store how much to park and she said $1 - not exactly gouging hikers. She was apologetic and explained that the reason she has to charge is because hikers steal all the TP from the garage's bathroom. That was a great story to get us started. After using the bathroom we set out on the trail. At 3,200' we reached the Log Cabin lean-to of the Randolph Mountain Club (RMC) (left) and at 4,400' the RMC Grey Knob Cabin (right). Grey Knob has a caretaker but no one was there and we spent some time checking out the cabin and making ourselves at home - it's really nice and clean, a miniature version of an AMC hut with mattresses in a loft and a kitchen corner and a woodstove and books. 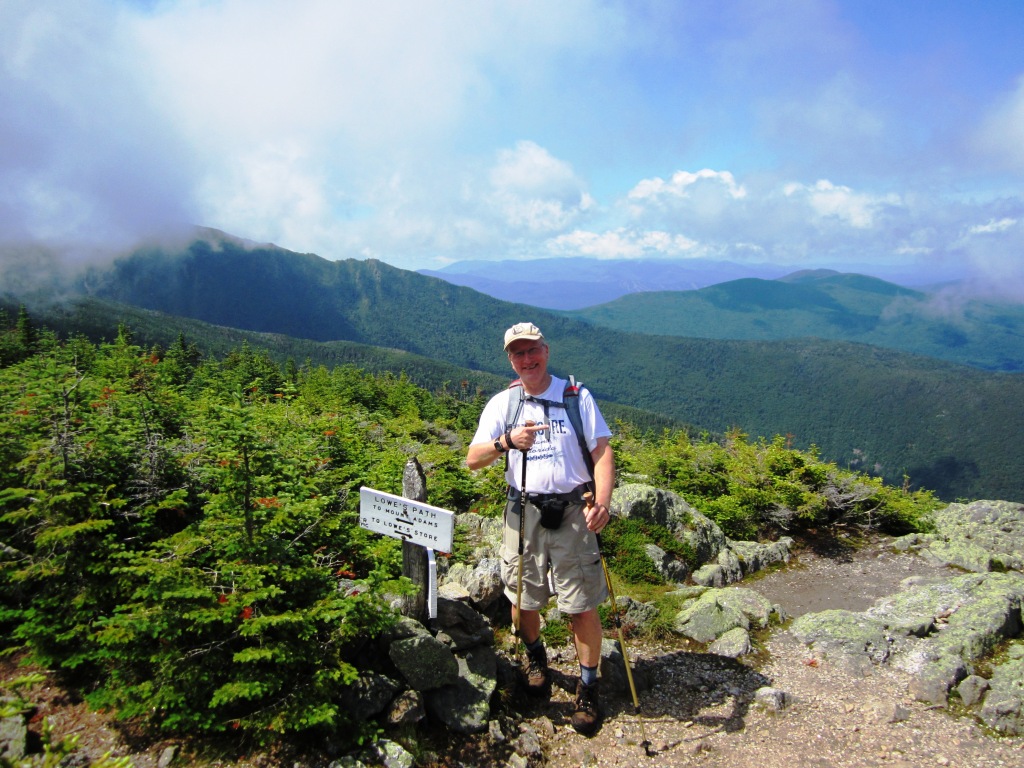 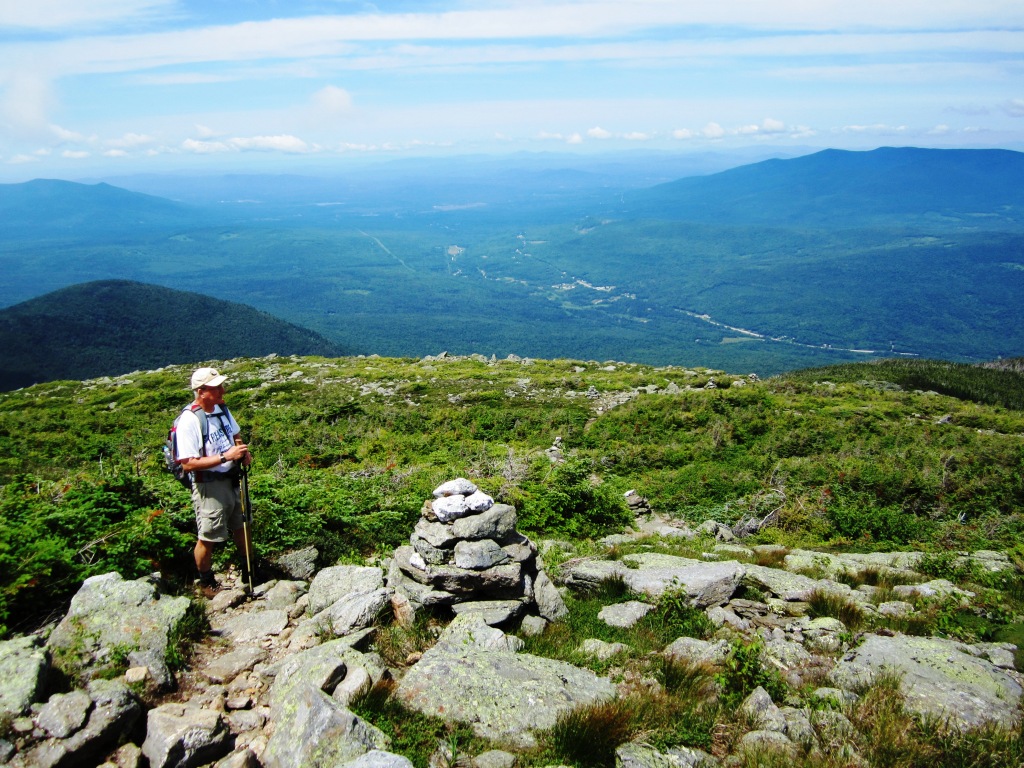 Above 4,400' we quickly got above treeline amid billowing clouds (left) and with great views to the north (right). Trail signs kept reminding us of the direction to "Lowe's Store" (trailhead) and we expected to see ads for Saturday specials. There were a lot of these trail signs because there were a lot of intersections and the RMC seems fond of trail signs. The RMC maintains an insanely dense network of trails on the north side of the Presidentials, legacy of the leisure class of the Great Hiking Era who summered at the Ravine House in Randolph served by the Boston & Maine Railroad. The number of criss-crossing trails almost seems too much, although it does spread out the hikers (we hardly saw anyone) and the RMC does a great job maintaining them - more on that below. 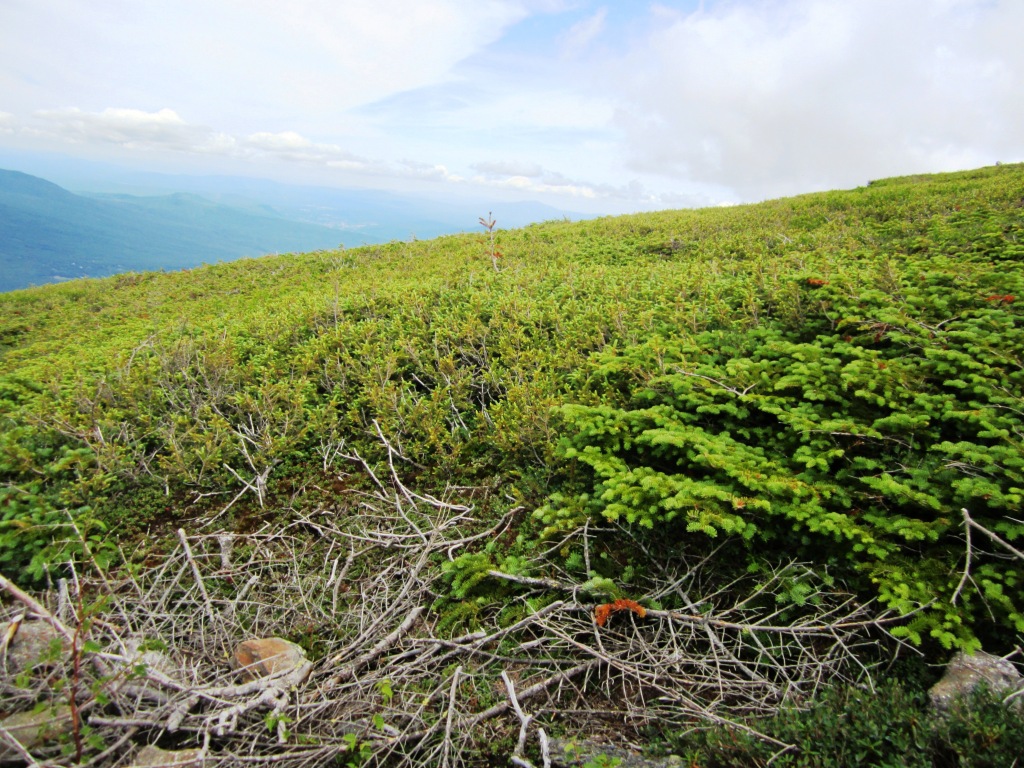 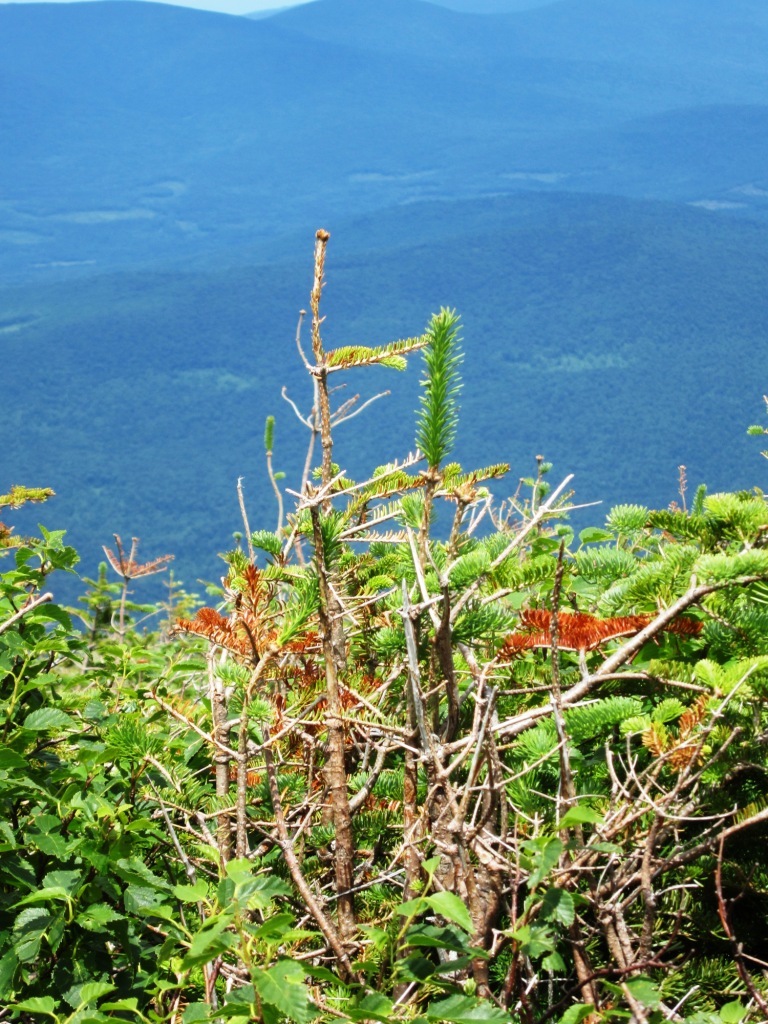 There's a special feeling about getting above treeline - you're on top of the world. In the White Mountains that transition is always very sharp. Here it was particularly beautiful because of the extensive zone of krummholz (dwarf spruce) forming a knee-high sea of green (left). On that krummholz I noticed a lot of new growth (right) and am concerned. Is this global warming? Are we going to lose our precious alpine zone as these trees grow? Never mind Florida under water - this is important! 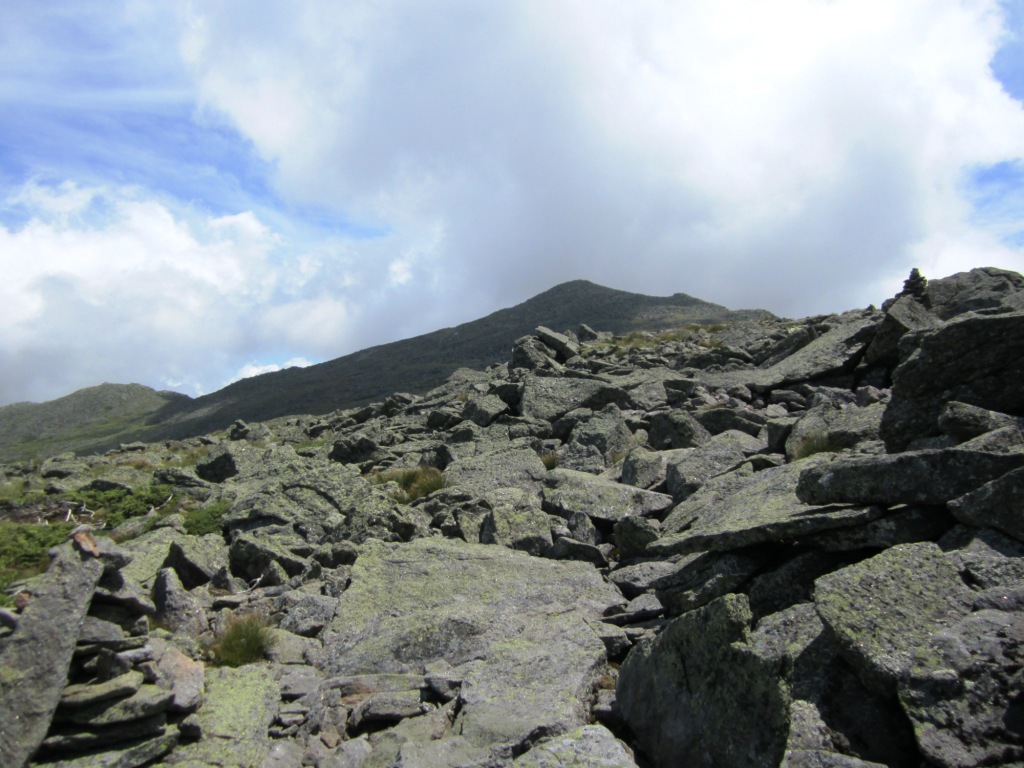 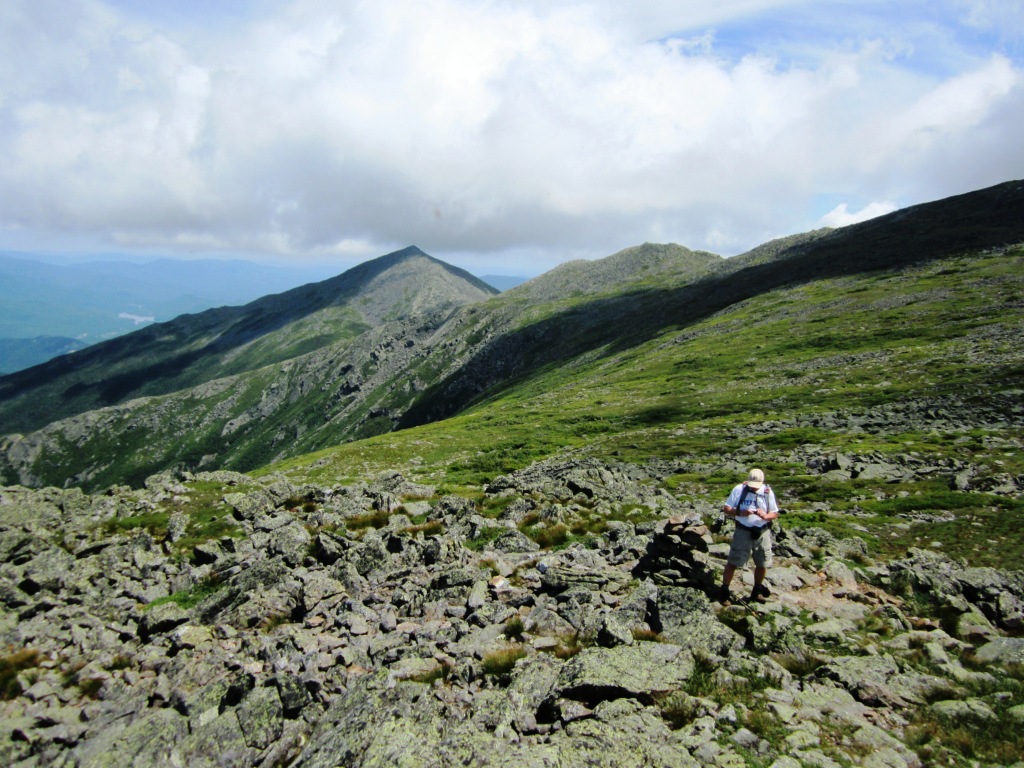 As we kept climbing the krummholz gave way to grass and eventually to rock, and Mt. Adams rose in the distance (left). We got above the rim of King Ravine we had a great view of Mt. Madison (right). Wind and cold are part of the standard experience of being above treeline but on this day we had hardly any breeze. We actually wished for wind because without it the bugs were bothersome. As I've mentioned from previous hikes, the only place where I've had problems with bugs in the White Mountains is above treeline on calm sunny days in early summer. It was no problem as long as we kept moving but it detracted from contemplation. 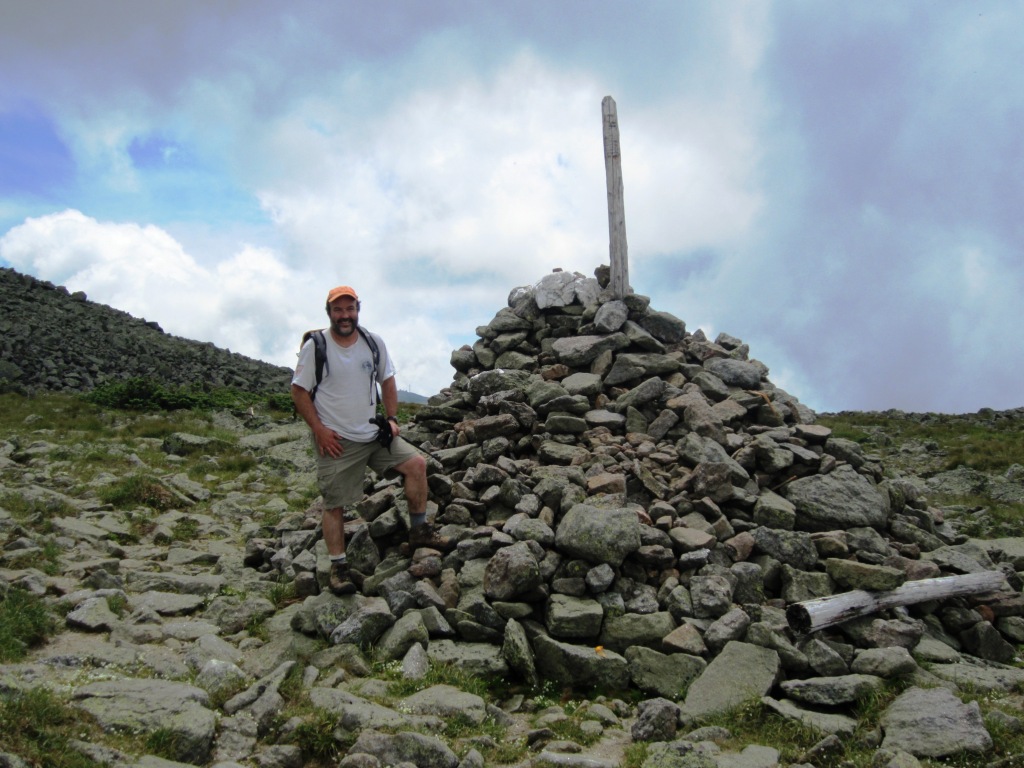 We got to Thunderstorm Junction, a well-known spot crossing the Gulfside Trail (AT) with a huge cairn (left). But it wasn't as tall as I remembered from previous visits, and a wooden pole revealed its internal architecture. Maybe it got a beating last winter. From there we did the final climb to Mt. Adams, which is a real leg-buster because there's really no trail - just boulder-hopping. At the top of Adams we found a few people and got our picture taken against the background of Mt. Washington (right). 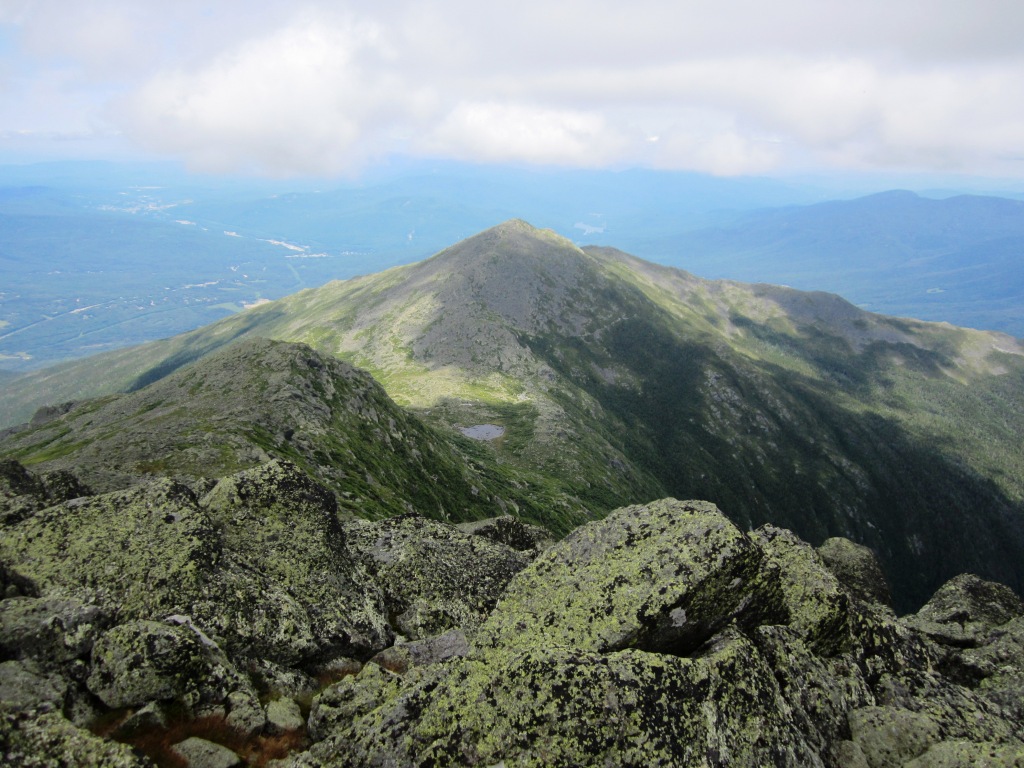 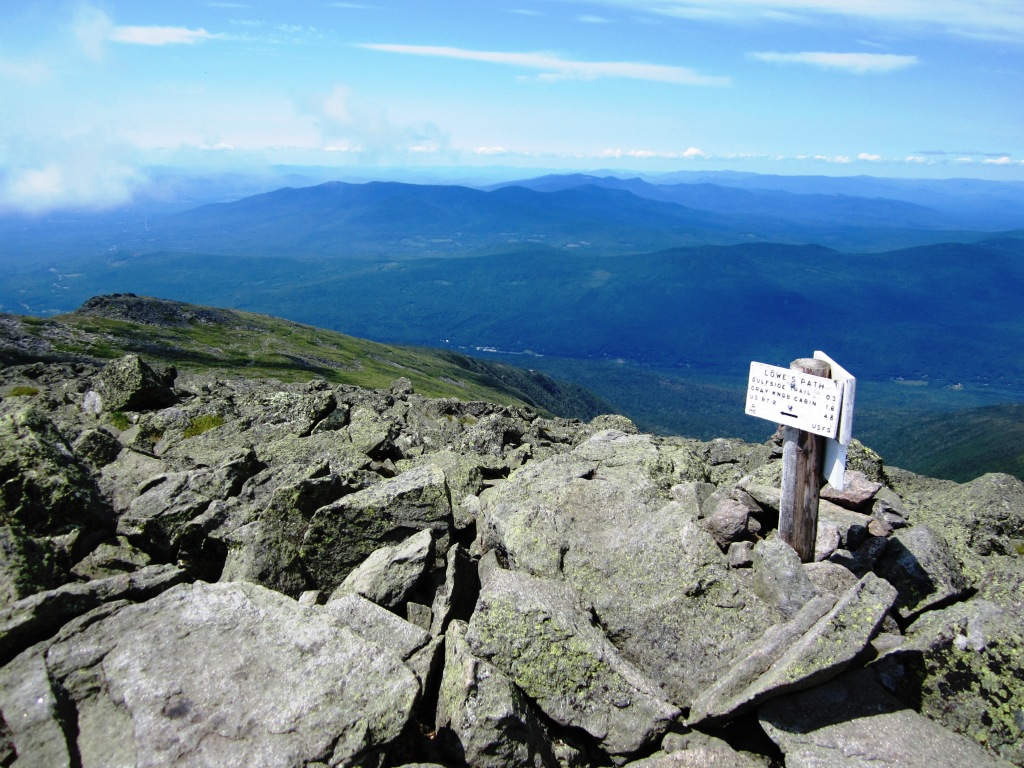 Mt. Adams at 5,800' is the second-highest summit in the Northeast and you indeed feel high up. I have climbed it many times and it is often wrapped in fog. Not today though and we had impressive views all around, looking back the way we came (right) and to the north toward Mt. Madison and Star Lake (left). We could see the ski slopes of both Wildcat and Bretton Woods - and I think that's the only place where you can see both. (btw there's one spot in the White Mountains where you can see four ski resorts - see my Mt. Carrigain hike report). 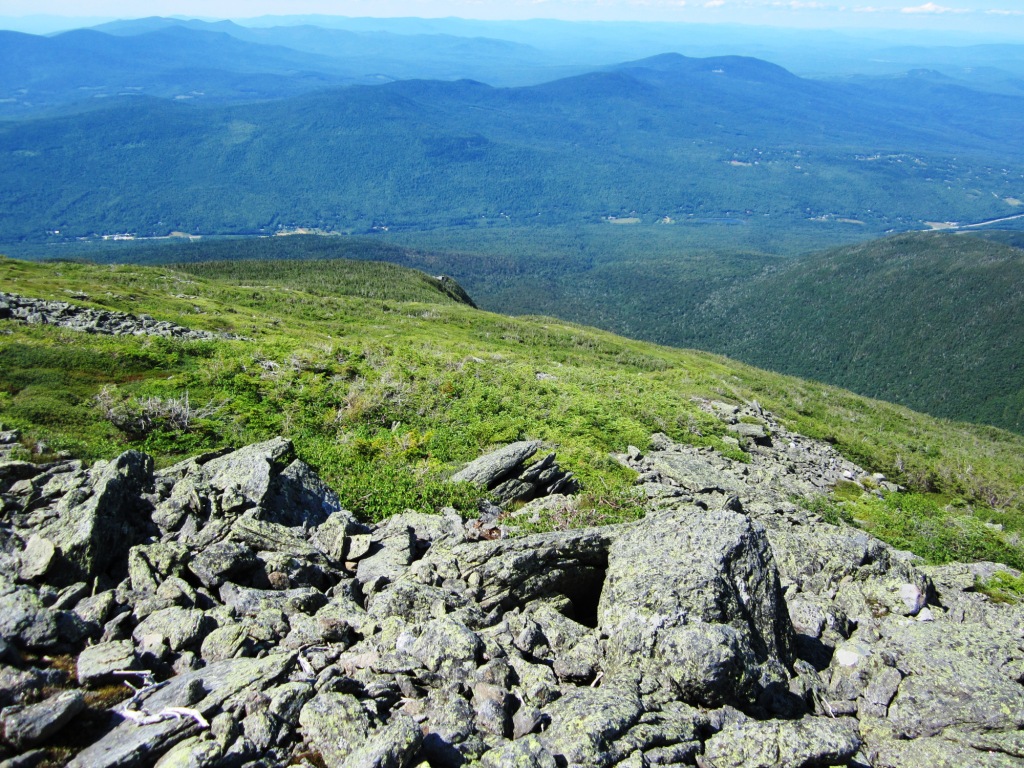 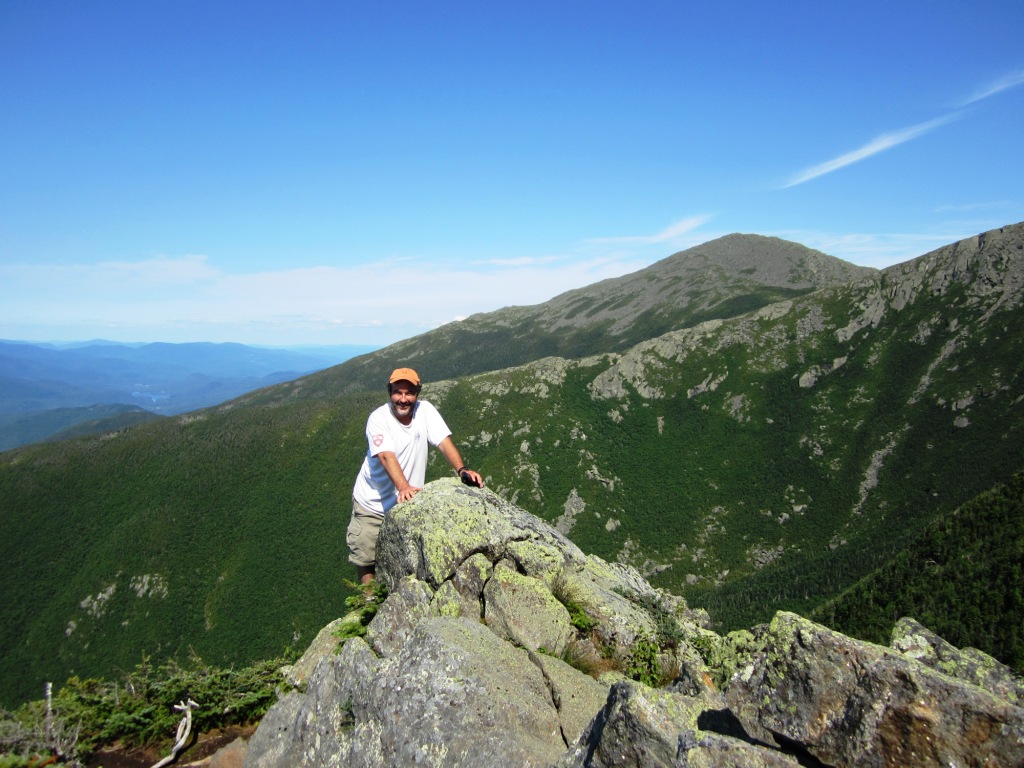 There was not a breath of wind on top of Adams and the bugs were annoying so we didn't stay very long. We decided to go down the Spur Trail, which would take us along the side of King Ravine and a visit to Crag Camp, another RMC hut. The photo on the left shows the distant view of Crag Camp from the Spur Trail, clinging to the edge of King Ravine. Just before dropping below treeline at 4,600' we took a side trail to Knight's Castle, a ledge on the edge of the ravine (right). 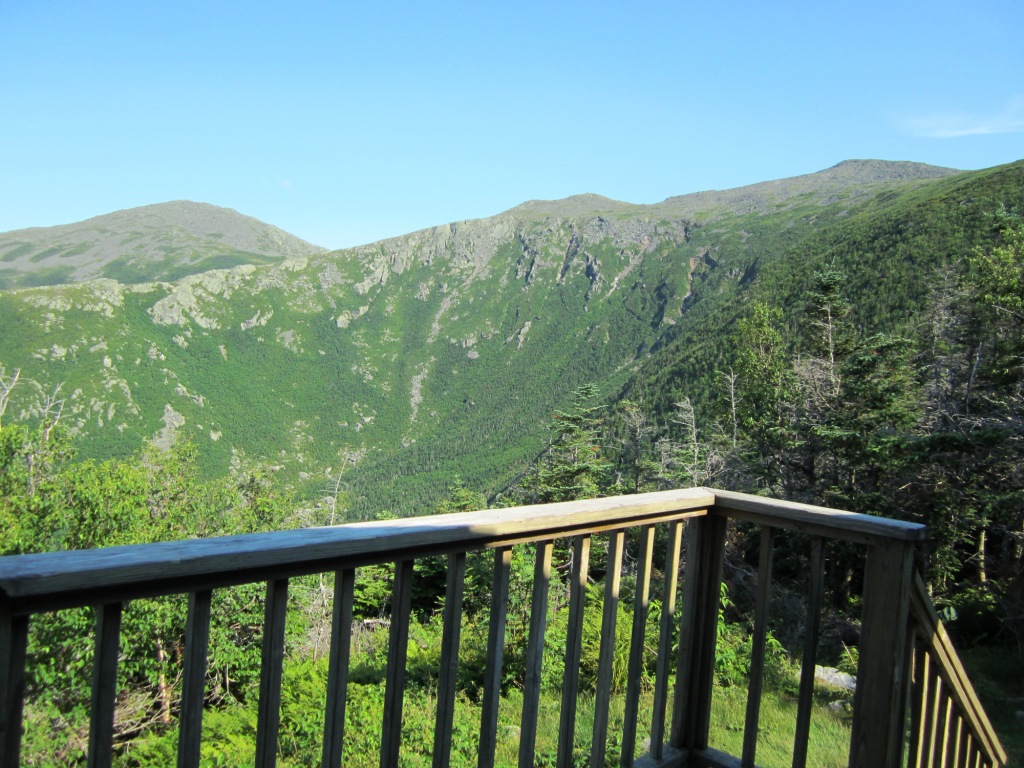 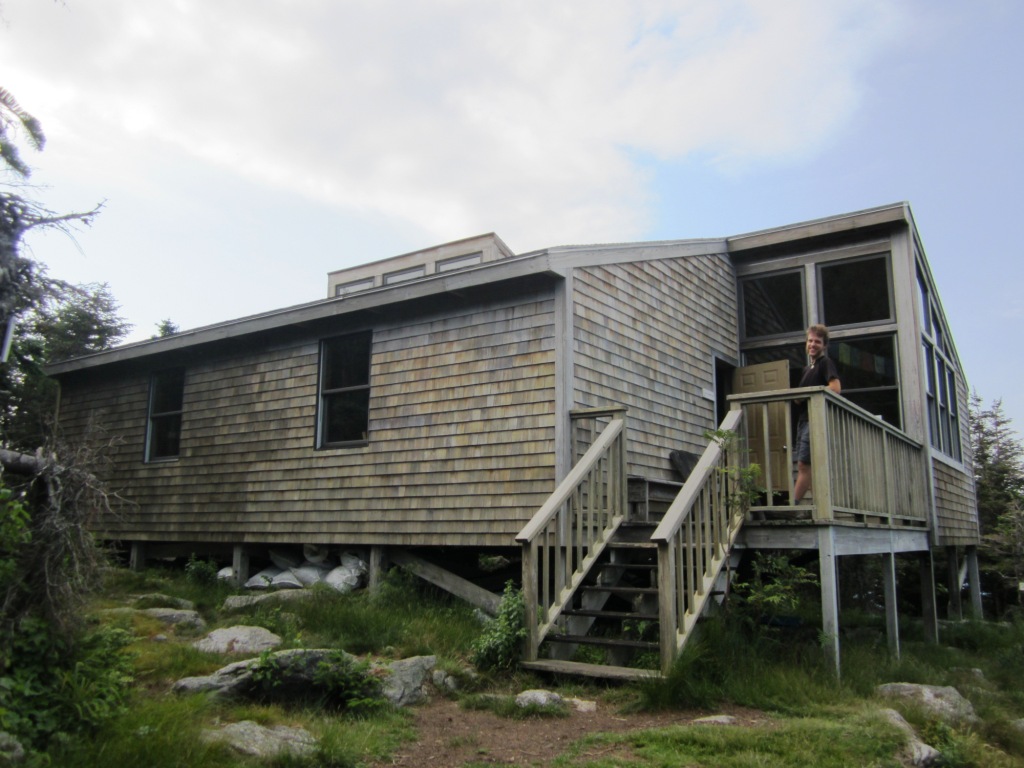 We got to Crag Camp at 4,400' and it was absolutely beautiful - a new airy hut with lots of windows, separate dorm rooms, and even a deck from which to enjoy the view of King Ravine (left). We met the caretaker (right) who patiently answered our many questions about the hut and about the RMC. It only costs $13/night to stay at the hut - compare that to the AMC thievery of charging $120/night for their huts, which they can obviously get (enough rich hikers, I guess) but shamefully shuts out families. The only time I have ever been able to afford the AMC huts with my kids is by taking advantage of their heavily discounted midweek June rates, and that left good memories (see Alex checking out his old journal entry at Madison Hut). But charging that much is not right. I will recommend the RMC over the AMC huts any day. 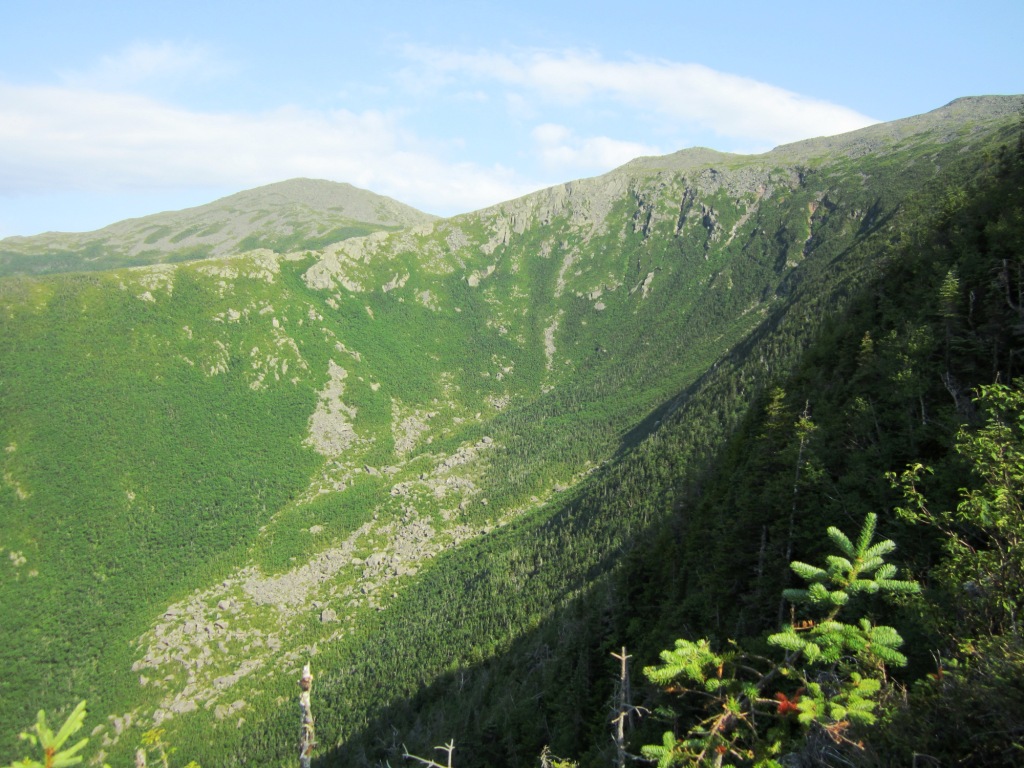 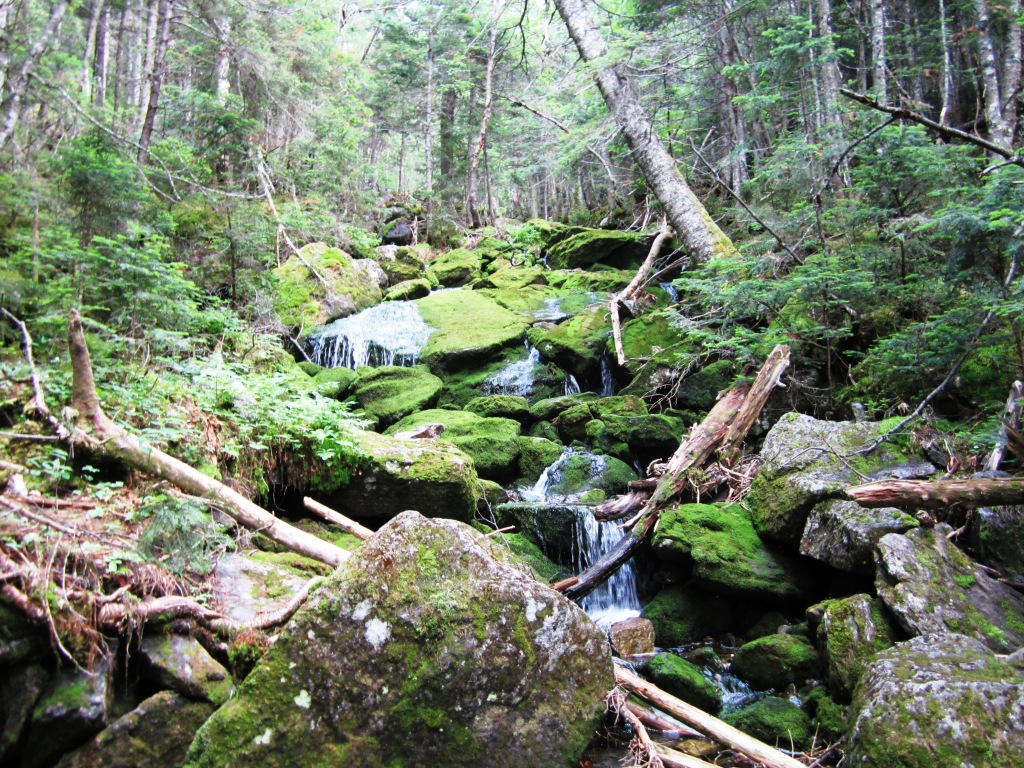 One last view of boulder-strewn King Ravine (left) and we were on our way down. I had done a great hike up King Ravine to Mt. Adams with Peter Wyatt a few years back. It is a place famously known for its year-round ice, and it also has great boulder scrambles. As we headed down Spur Trail we crossed a number of mossy streams (right). That whole area has a lot of moss everywhere, it must receive a lot of rain. It is indeed directly in the path of the NW winds as they climb the Presidentials and dump their moisture. 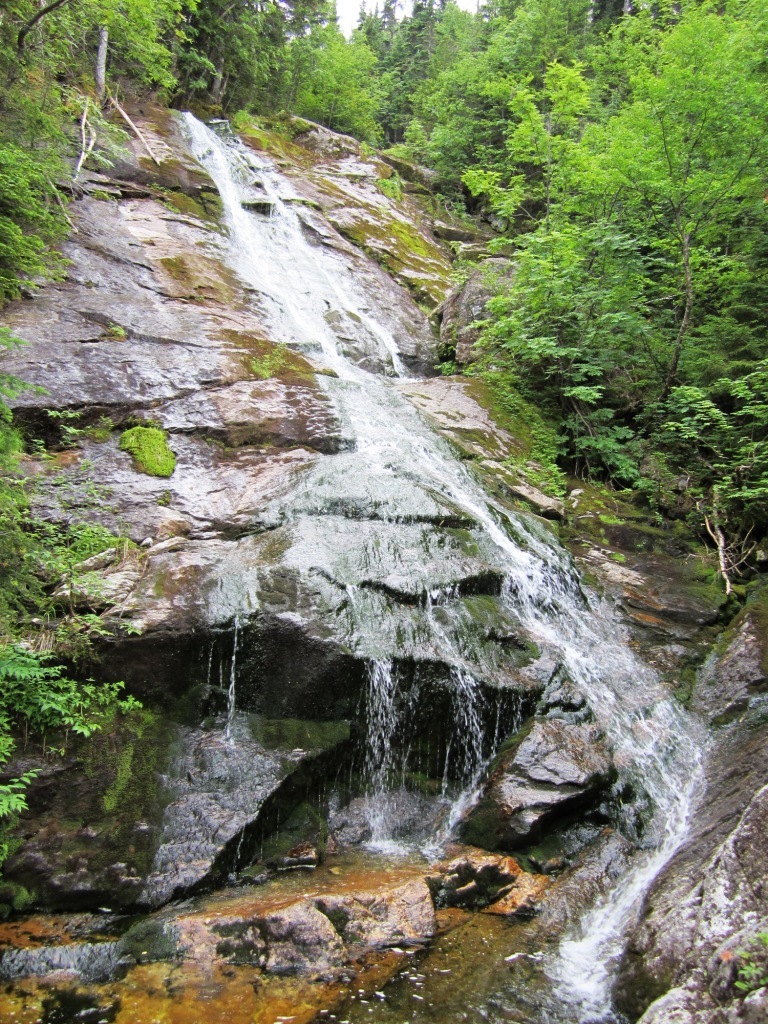 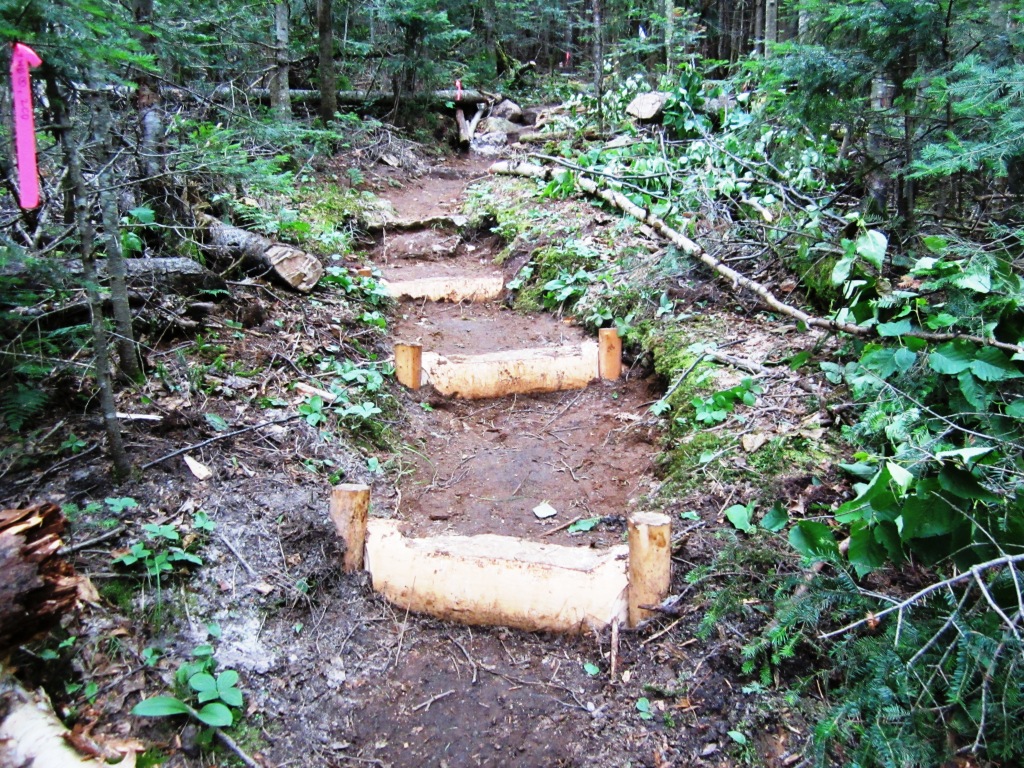 At 3,200' a side trail led to pretty Chandler Falls (left) and below that we reached the intersection with the King Ravine Trail to take us back to Lowe's Path. That section of the King Ravine Trail seems to be little used, yet all of a sudden we found an area of heavy mud trampling and flags on trees. This was a spot of very recent trail maintenance activity - it couldn't have been more than a few days old, based on the mud and the wood chips everywhere. We admired the fine trailwork including brand new wood steps (right) axed from the local trees. The caretaker at Crag Camp had told us that the 800-member RMC employs a professional trail crew to maintain their network of trails, and I am really impressed. Thank you RMC!