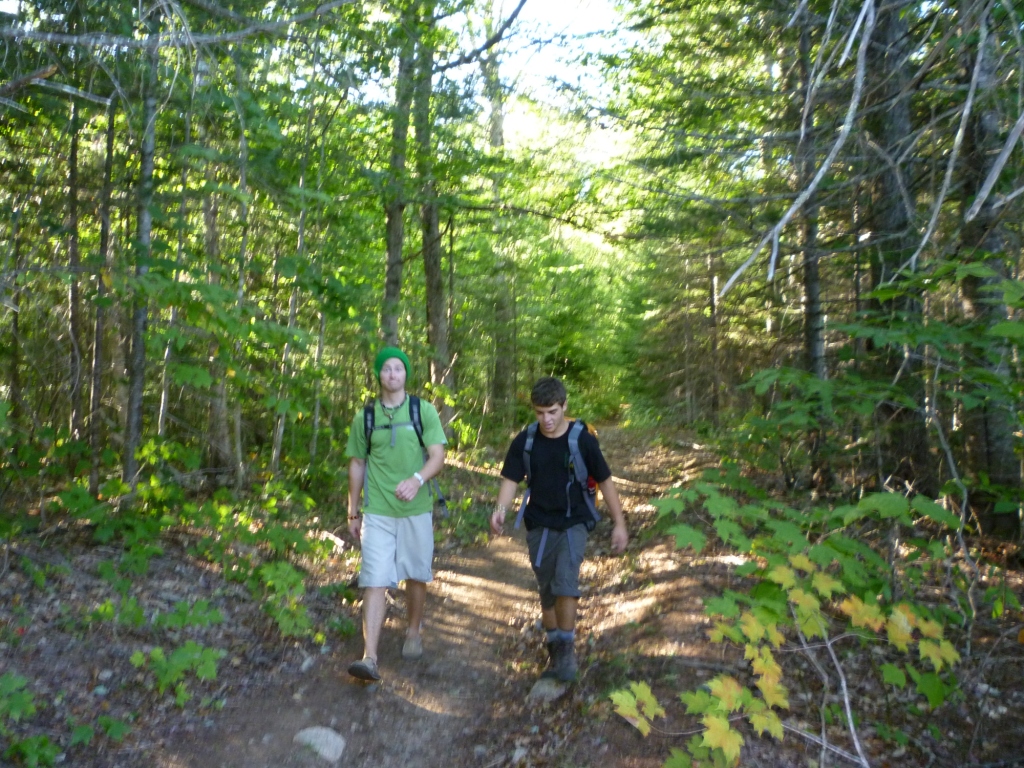 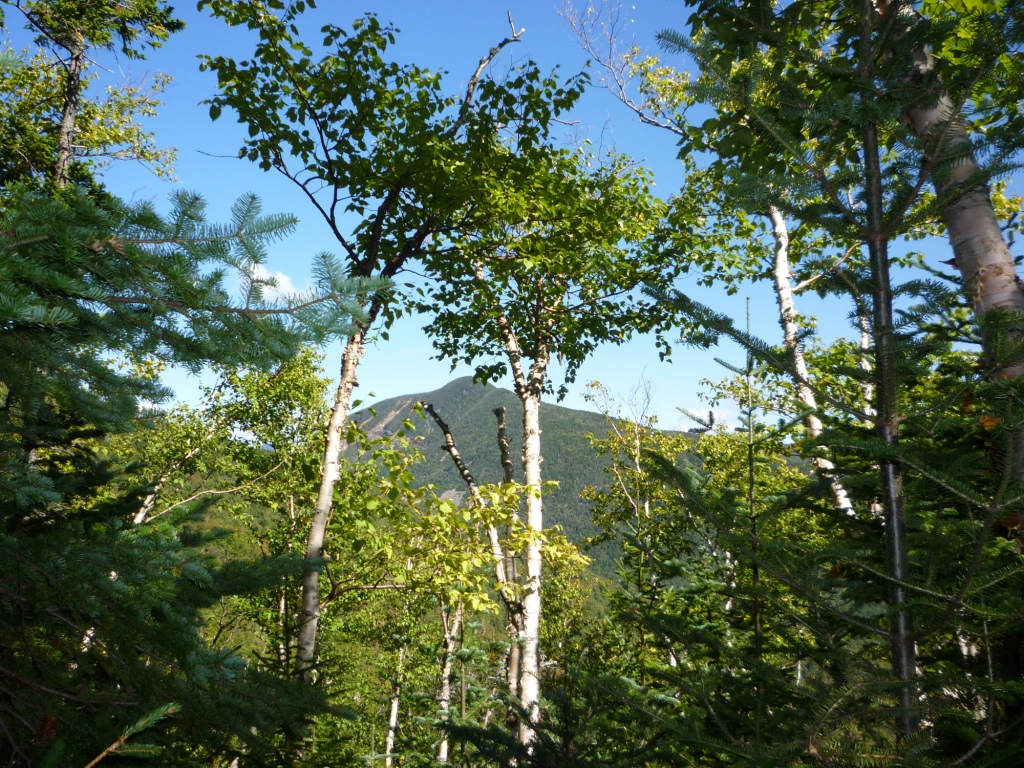 On this fateful anniversary date in US history I set out to do Mt. Carrigain by Signal Ridge with Alex and his friend Dave Warren. This is a substantial but straightforward hike. There's a 2-mile flat approach on a wide fire road that sometimes feels like a boulevard (left), then a long steep climb from 2000' to 4,400' up Signal Ridge that's not particularly interesting but features switchbacks so the grade is moderate throughout (switchbacks are very uncharacteristic of trails in the White Mountains, which generally send you straight up without regard to slope). In the upper part of the climb we started getting glimpses of views through the trees, like this one of Mt. Lowell across Carrigain Notch. 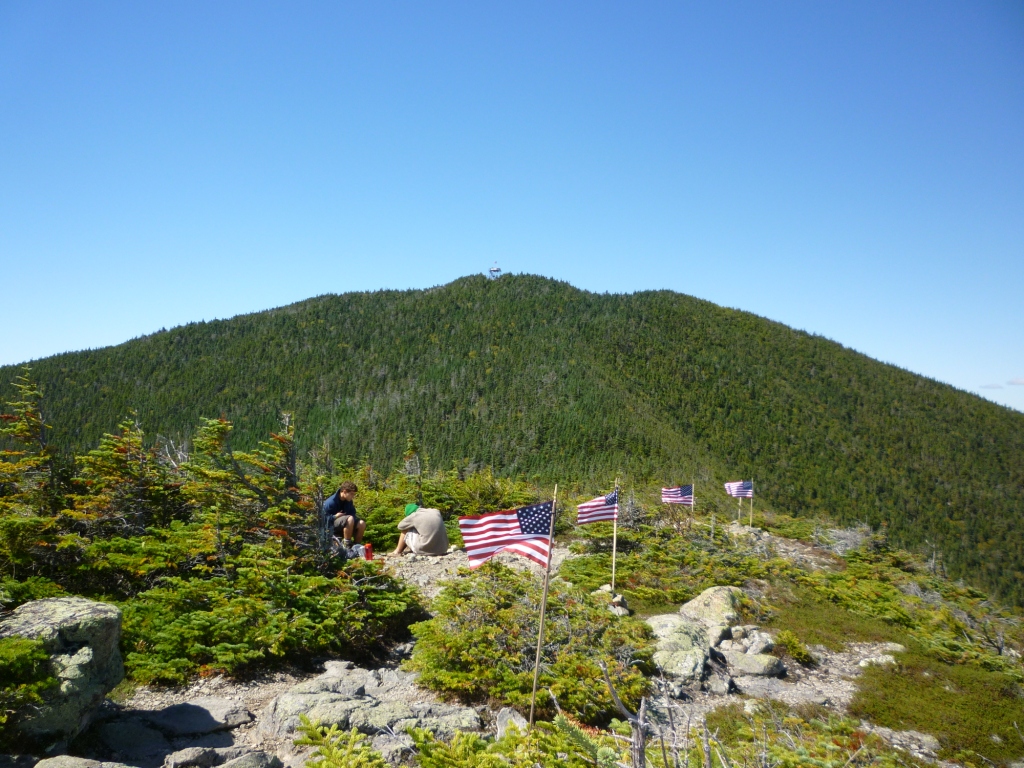 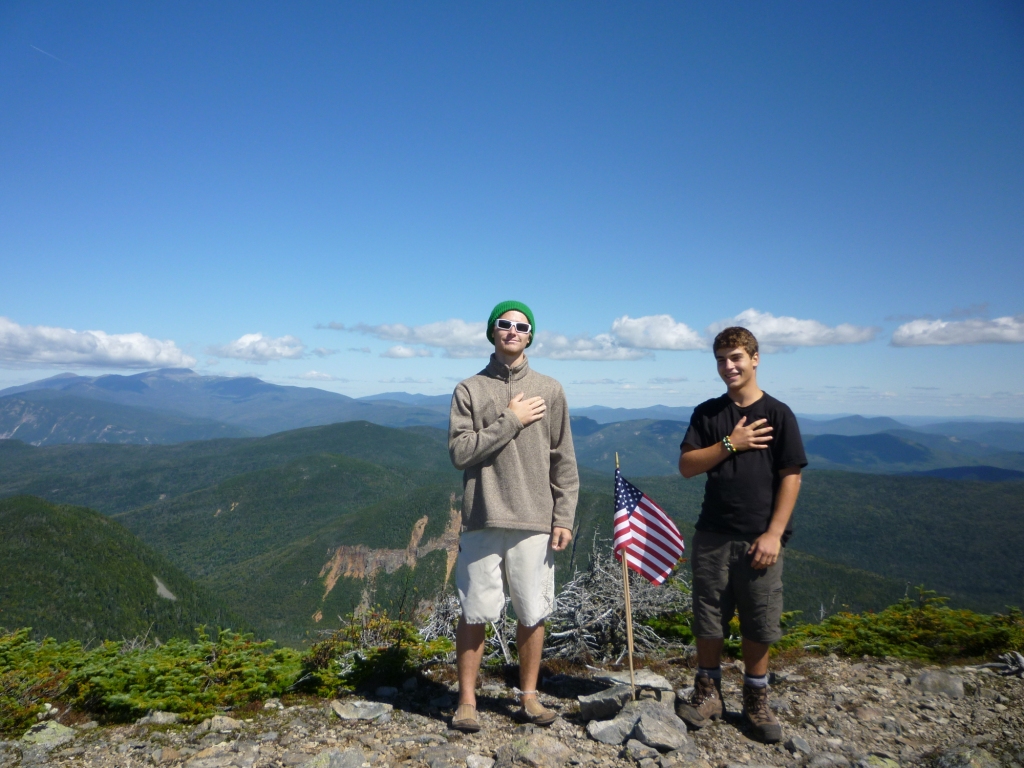 The spectactular part of the trail arises when you emerge on bare Signal Ridge at 4,400' for a sweeping panorama and a steep precipice to the north. On this day the views were augmented by US flags, because it is now a tradition for hikers to fly flags on top of all forty-eight 4,000 footers in New Hampshire on 9/11. So the trail along Signal Ridge was lined with flags, and the flag atop Mt. Carrigain where we were headed was flapping in the breeze (left). I looked around and could also see (faintly) the flags on top of North Hancock and Tecumseh. Alex and Dave instinctively put themselves in the pledge of allegiance position (right) 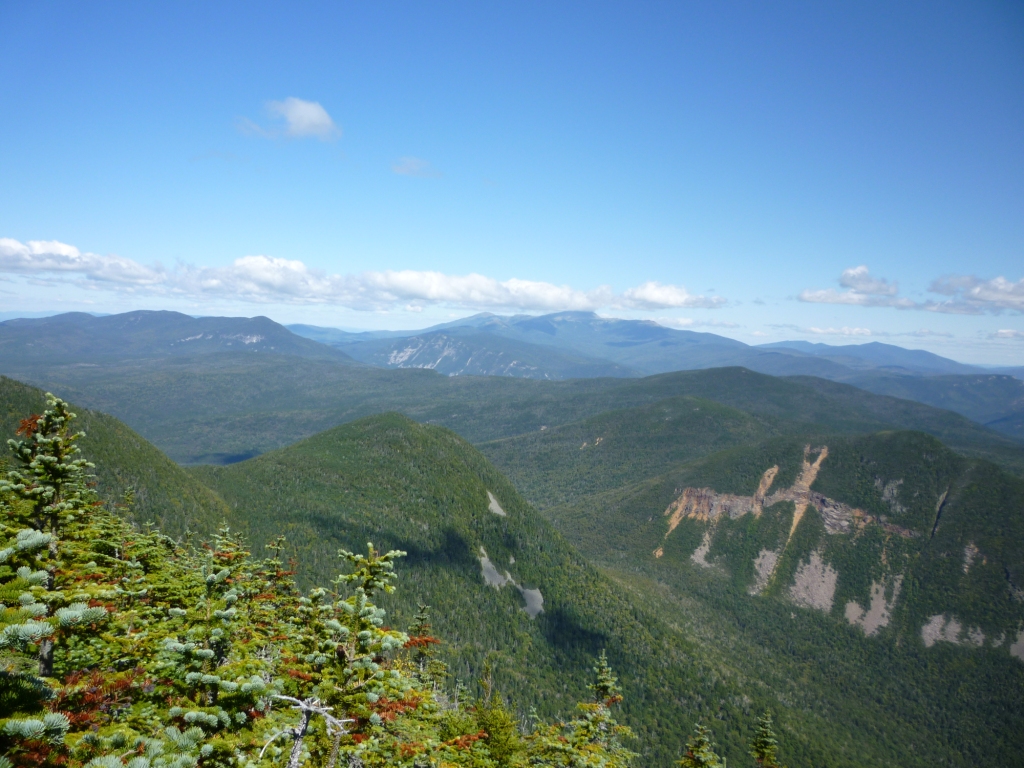 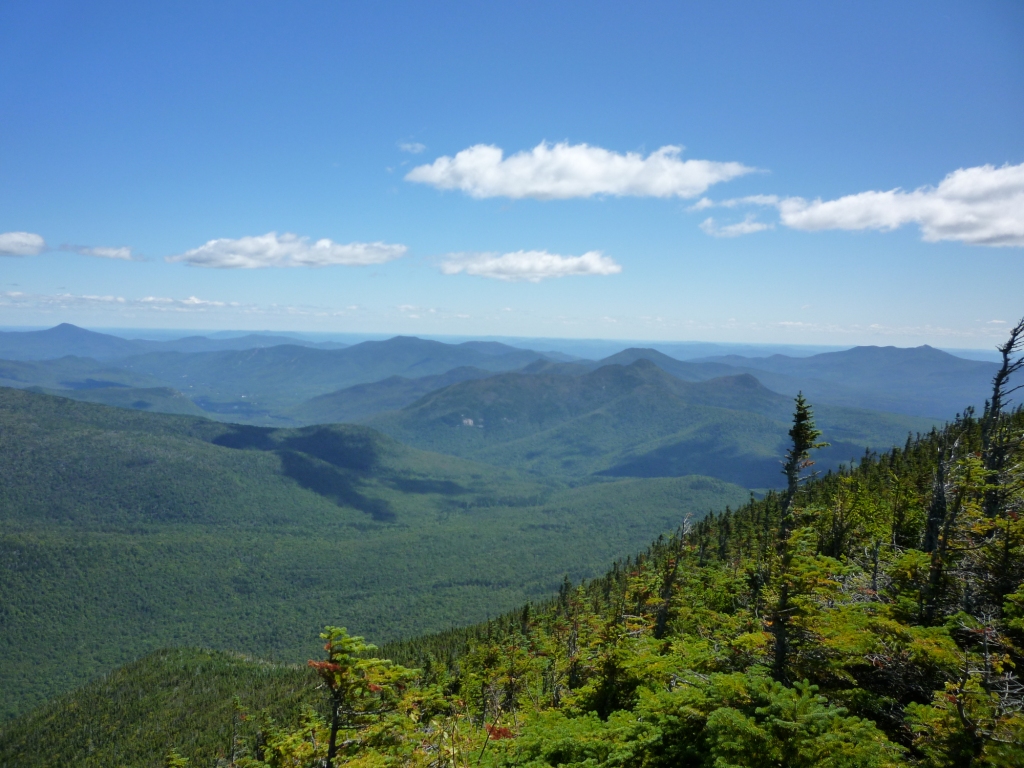 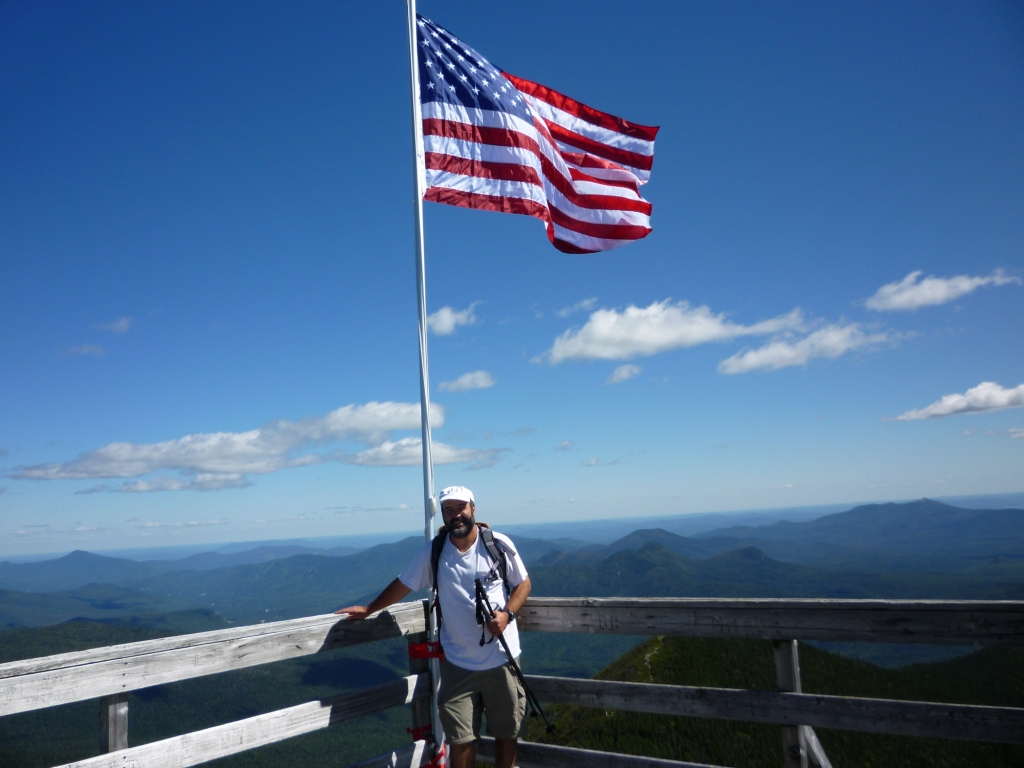 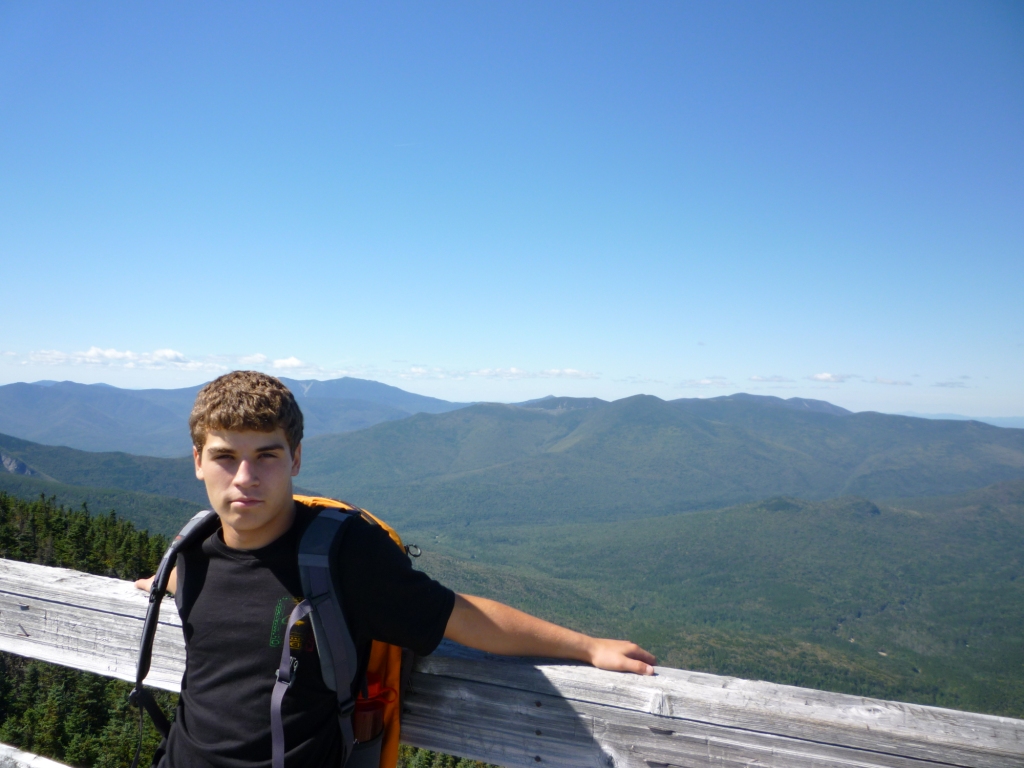 We then proceeded to the top of Carrigain, just 300' elevation higher. It's disappointing that at 4,700' Mt. Carrigain doesn't have much of an unassisted view because of the trees. As I like to say, Nature would be awfully nice if it wasn't for all those trees. Fortunately, a former fire tower on top of the mountain provides an absolutely spectacular 360o, reflecting Carrigain's central position in the Whites. My guidebook says that you can see 43 4,000-footers from the top of Carrigain, and on this particularly clear day I could see all the way to Monadnock to the south. I got my picture taken with the flag on the tower (left) just before it was brought down at 2 pm, at which point the dozen hikers on the tower broke into the national anthem (right). I'm not into excessive displays of patriotism but this was nice and appropriate - it made me proud to be an American. 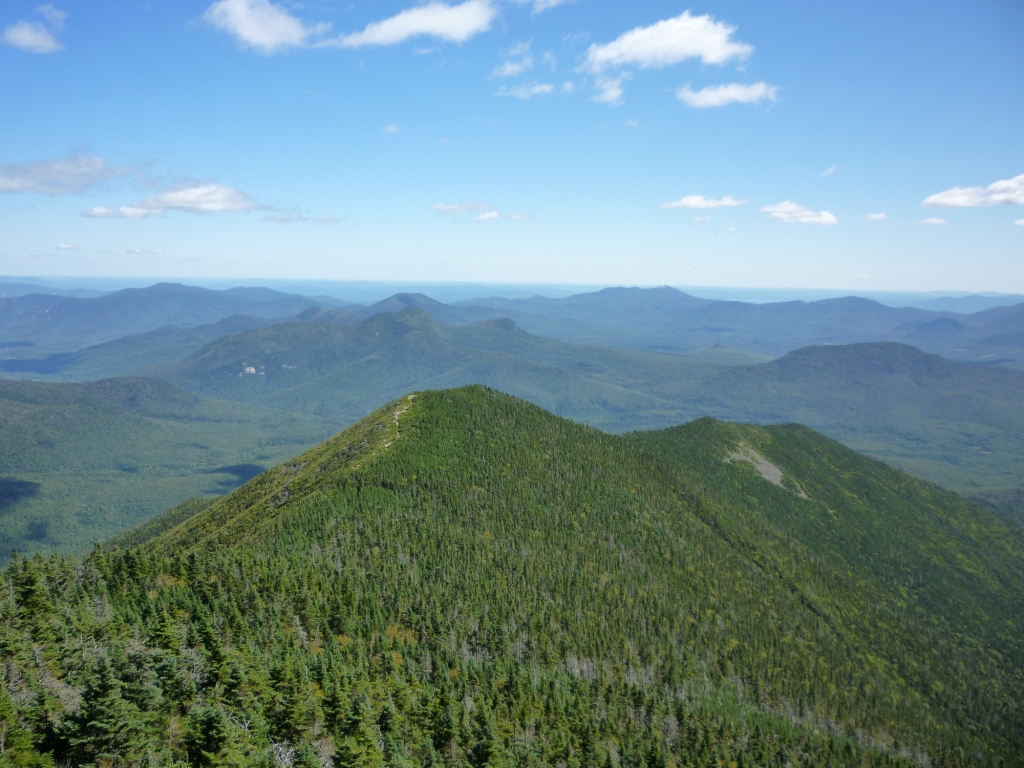 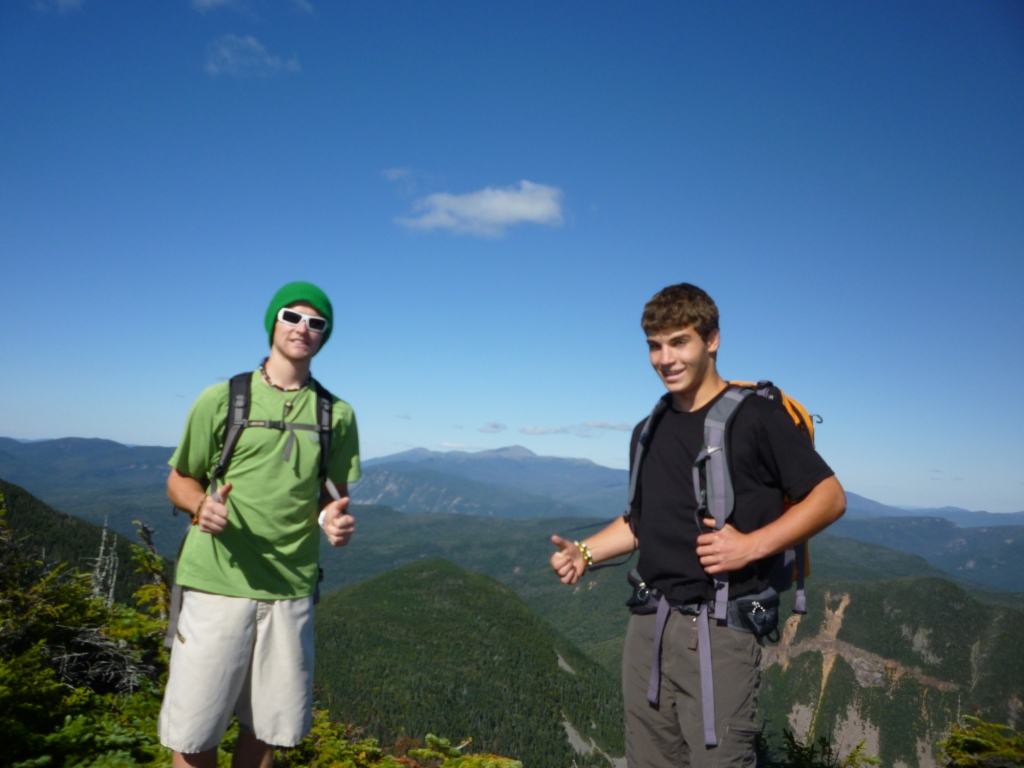 After that the crowd left with flag and poles distributed among backpacks and we were left to enjoy the amazing view. This was Alex's 37th 4,000 footer - just 11 to go! Here he is at left with the Bonds in the background. There was also a great view looking back to Signal ridge (right). I was very pleased to read in my guidebook that the tower was reconstructed in 1981 for the hikers' benefit. I could just imagine some USFS bureaucrat sitting in his office in DC and deciding that the tower was an offense to the wilderness and should be dismantled. I'm glad that Mt. Carrigain escaped this nonsense. 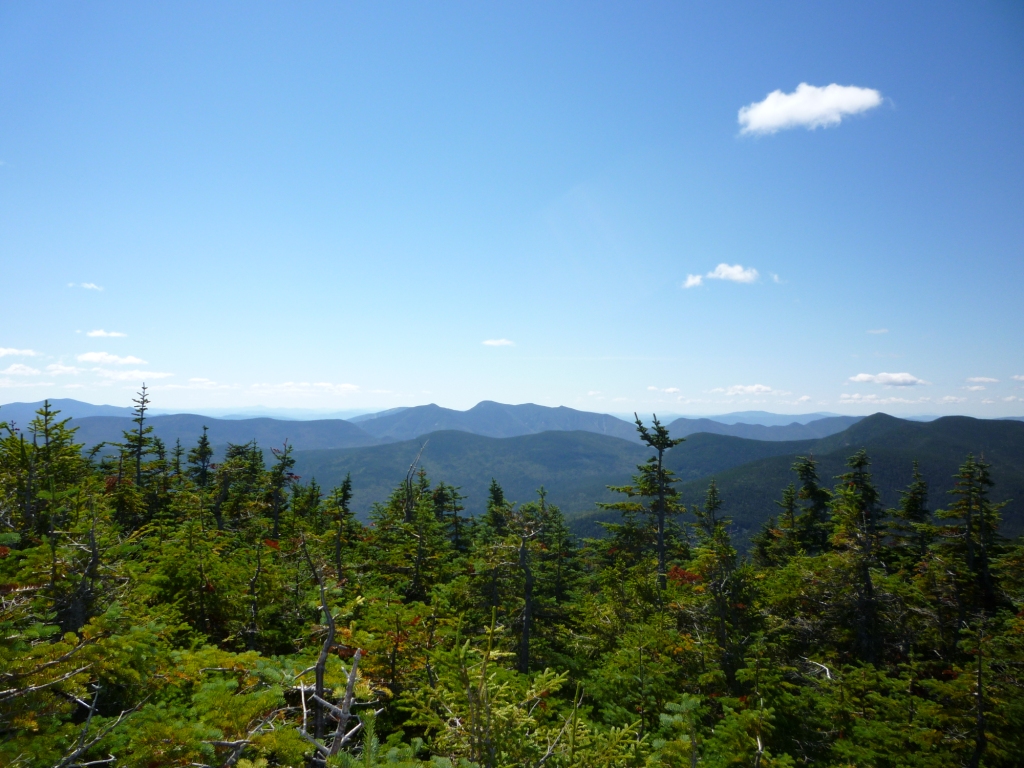 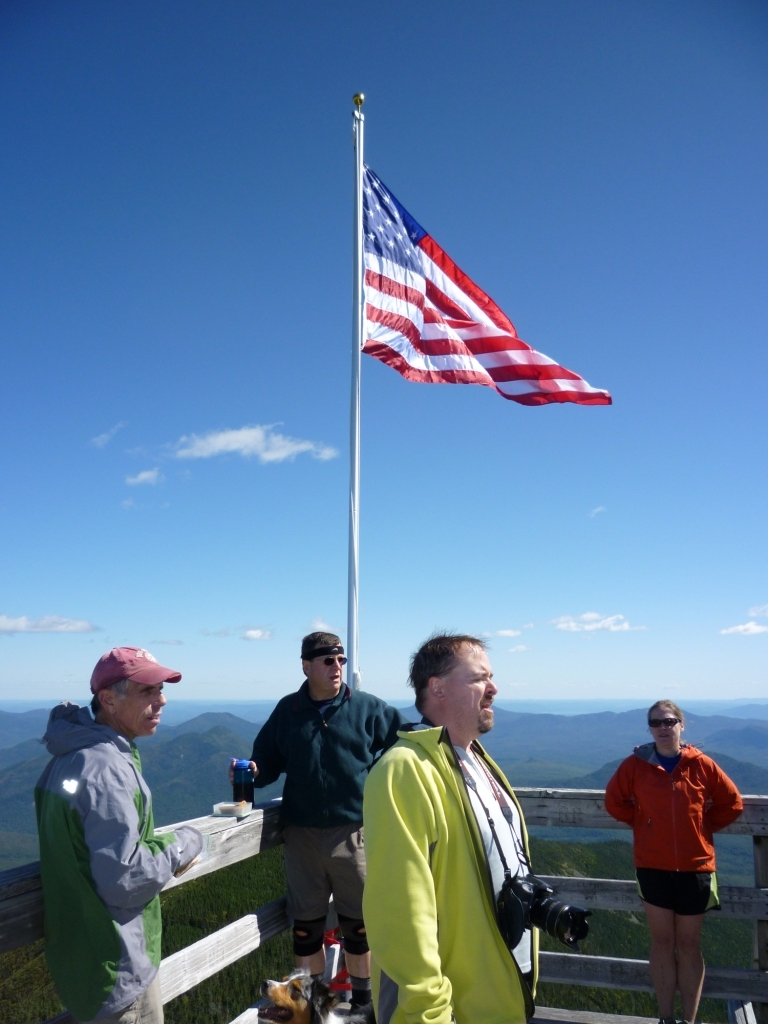 Finally we had to head back, and got a final view from the base of the tower (left) before going down. There were a bunch of unofficial and attractive campsites scattered on the ridge just below the peak and they seemed like nice places to spend the night, Also Desolation Trail going down in the Pemi Wilderness looked tempting but this will be for another day! We hung out a while longer at Signal Ridge enjoying the view (at right is the view of the Osceolas to the south) before heading back into the woods for the return.