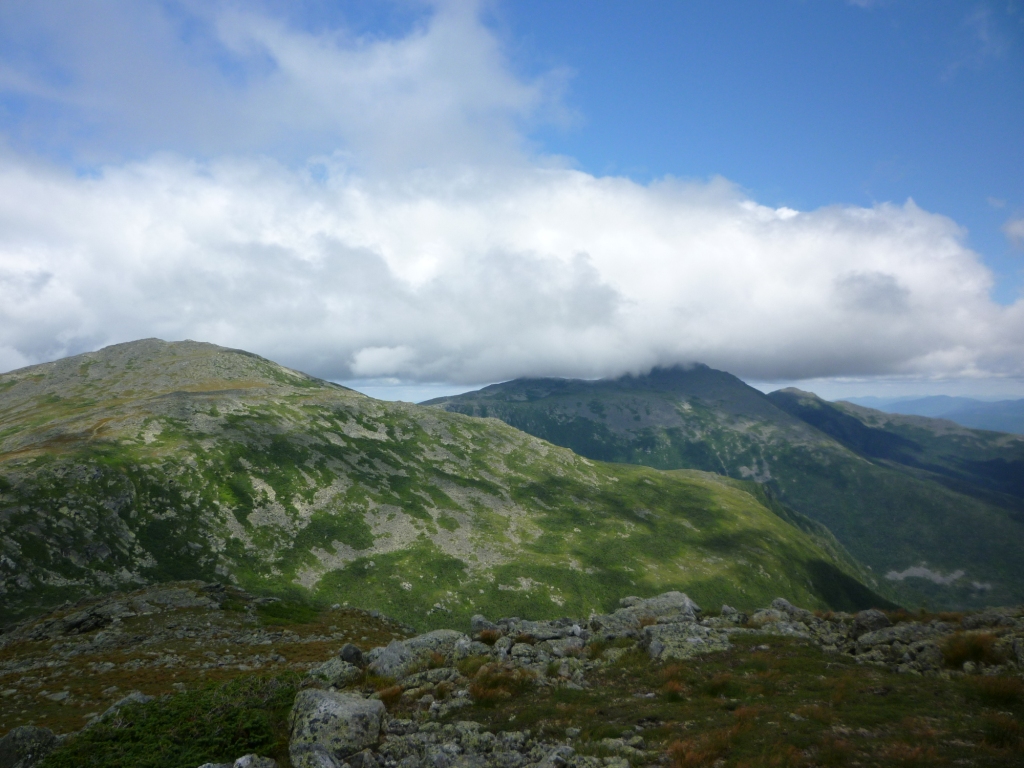 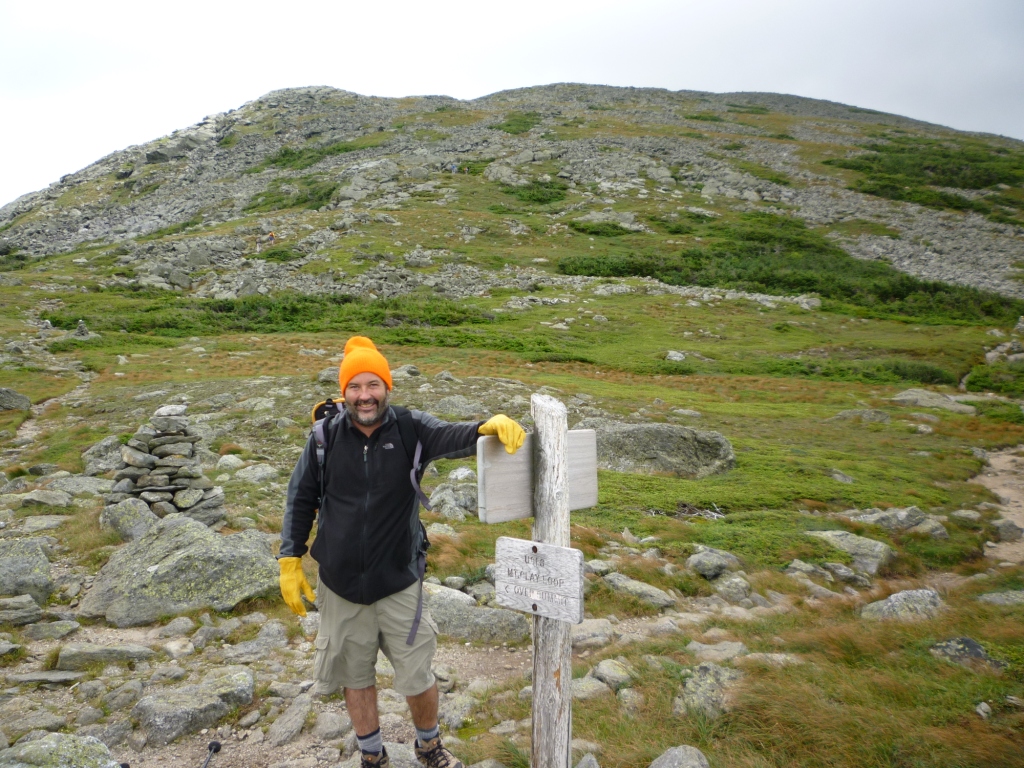 I just adopted the orphaned Mt. Clay Loop for the AMC which means that I'm now responsible for fixing blowdowns, trimming branches, cleaning drainage ditches, etc. Good think that the trail is all above treeline! The main job here is repairing cairns, and ensuring that the trail is well defined using scree walls and other delimiters. On this day, Roger Gagne and I went on a reconnaissance visit to my trail, going up Caps Ridge, crossing over to Clay, and going down Jewell wher we had spotted a car. From the intersection of Caps Ridge and the Cornice we had a great view of Clay (left), with Mt. Washington behind it in the fog. It was with some trepidation that I reached the Mt. Clay trailhead (right). 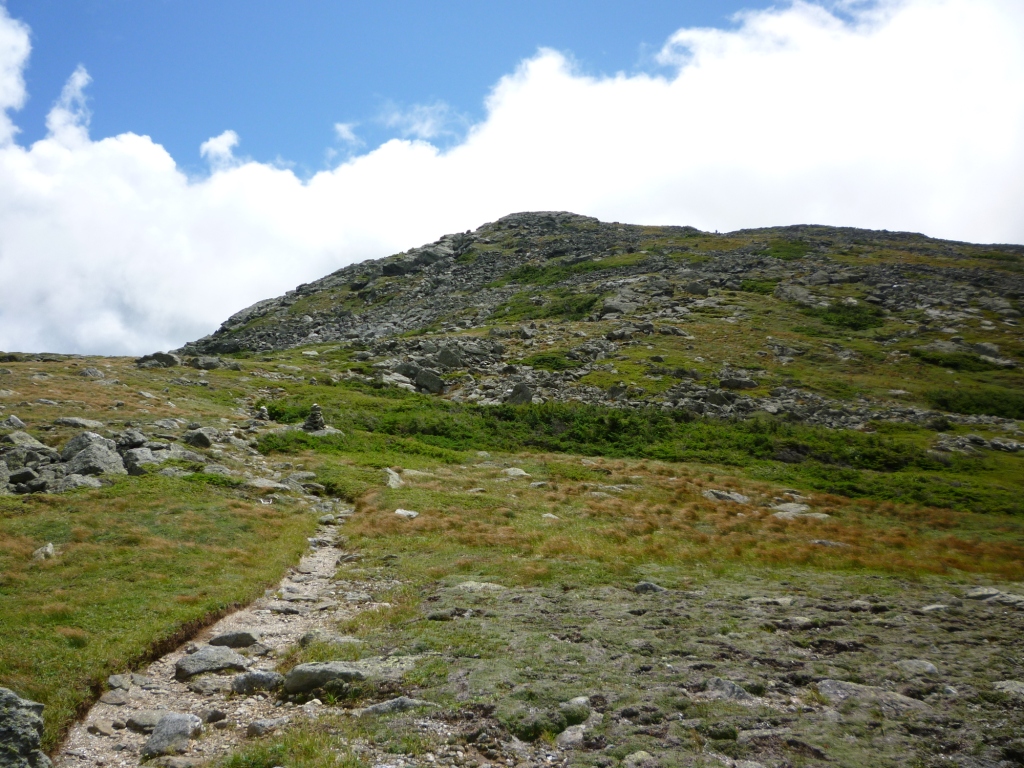 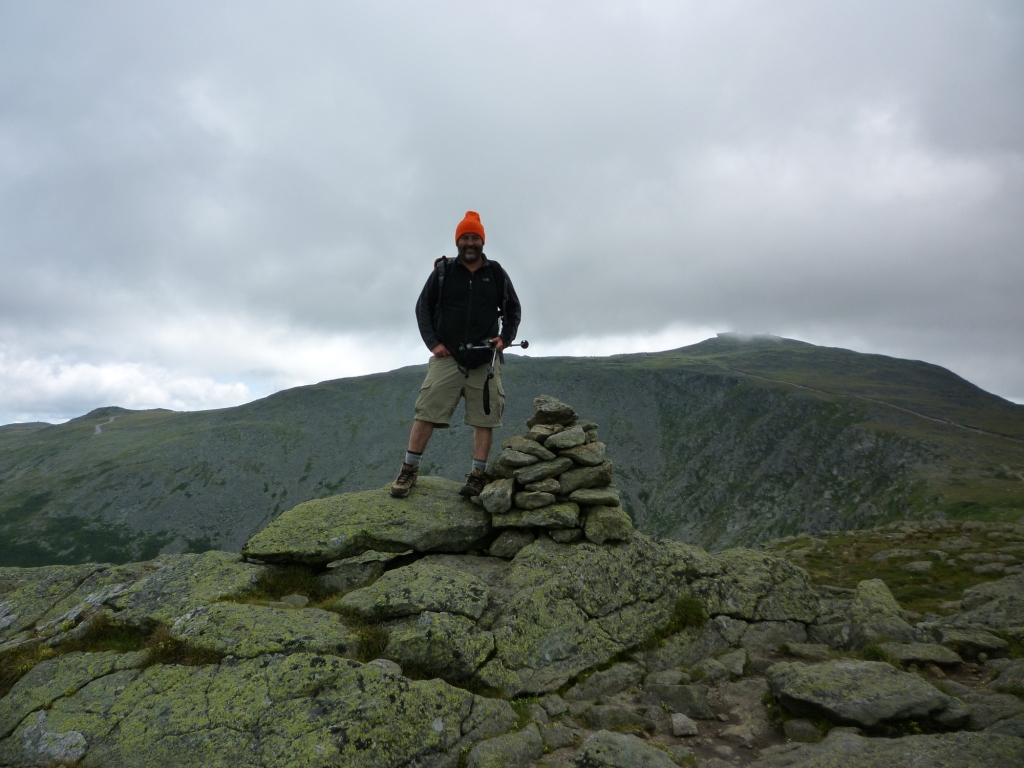 The Mt. Clay Loop is 1.2 miles long and parallels the Gulfside Trail, which is the classic trail of the Presidentials Traverse but avoids the summits. Despite peaking at 5,553' Mt. Clay doesn't qualify as a 4,000 footer because it doesn't have enough of a col with Mt. Washington - so it's effectively viewed as just a Mt. Washington shoulder. Maybe as a result, we found that few hikers took the Loop - most stayed in the Gulfside. Or maybe they had heard that it wasn't maintained? But it's changed now, here I am! Fortunately I found the trail to be in good shape (left), the main problem being a large number of substandard cairns. At least there was a great cairn at the summit (right). 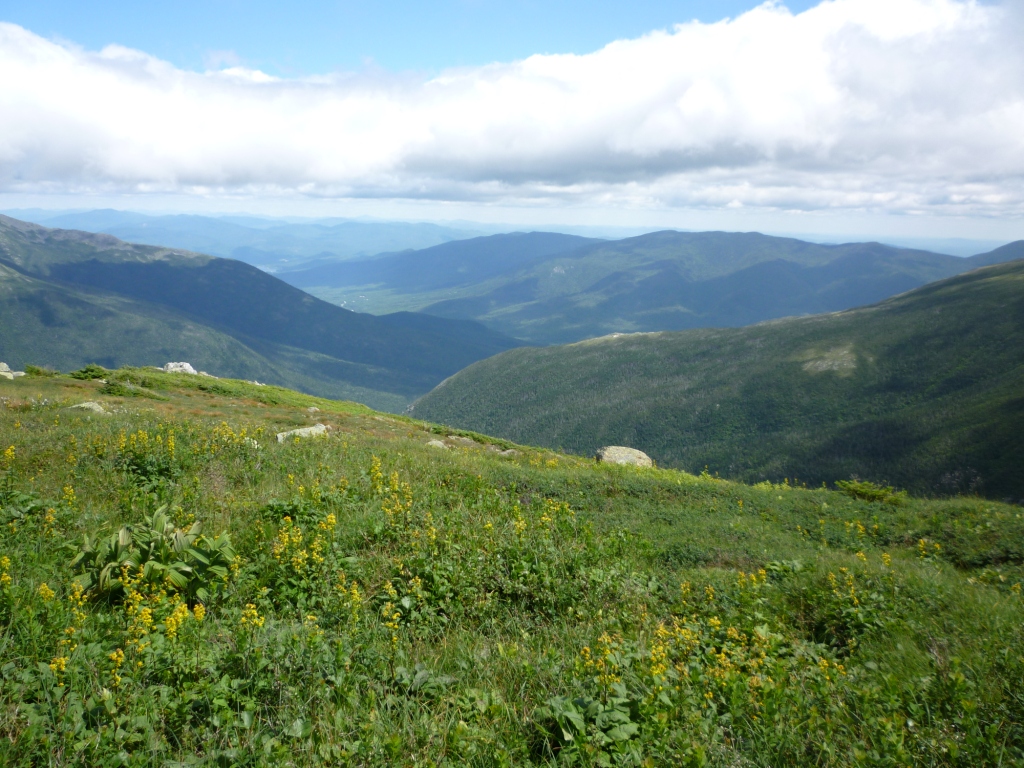 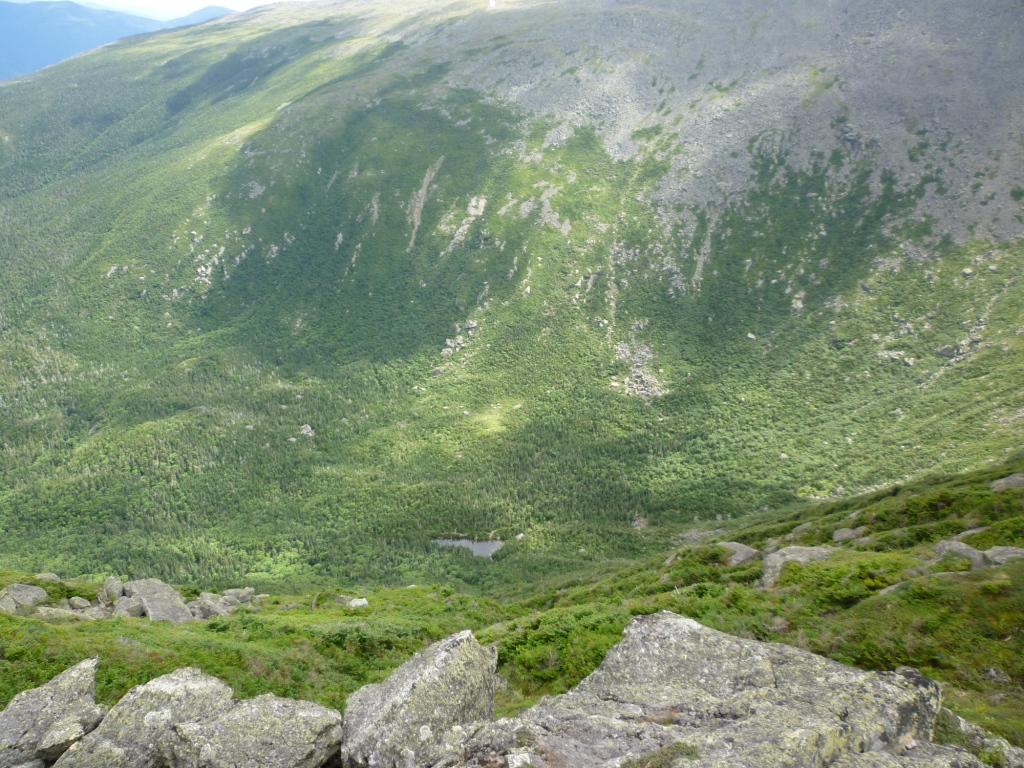 The views from Mt. Clay are really superb and unique. I highly recommend it, particularly now that it's maintained. There's an excellent view of the Great Gulf (left - notice the pretty yellow flowers along the trail). By looking down into the Gulf one can see tiny Spalding Lake (right) and I think that this is one of the only spots along the Presidential Ridge where you can see it. 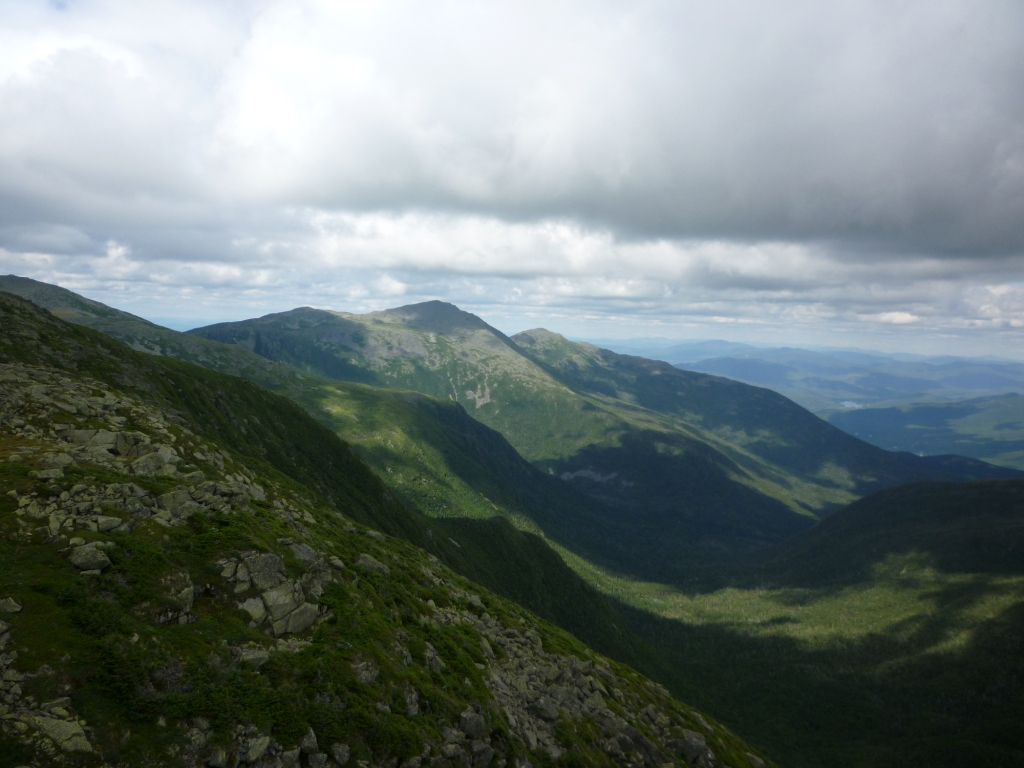 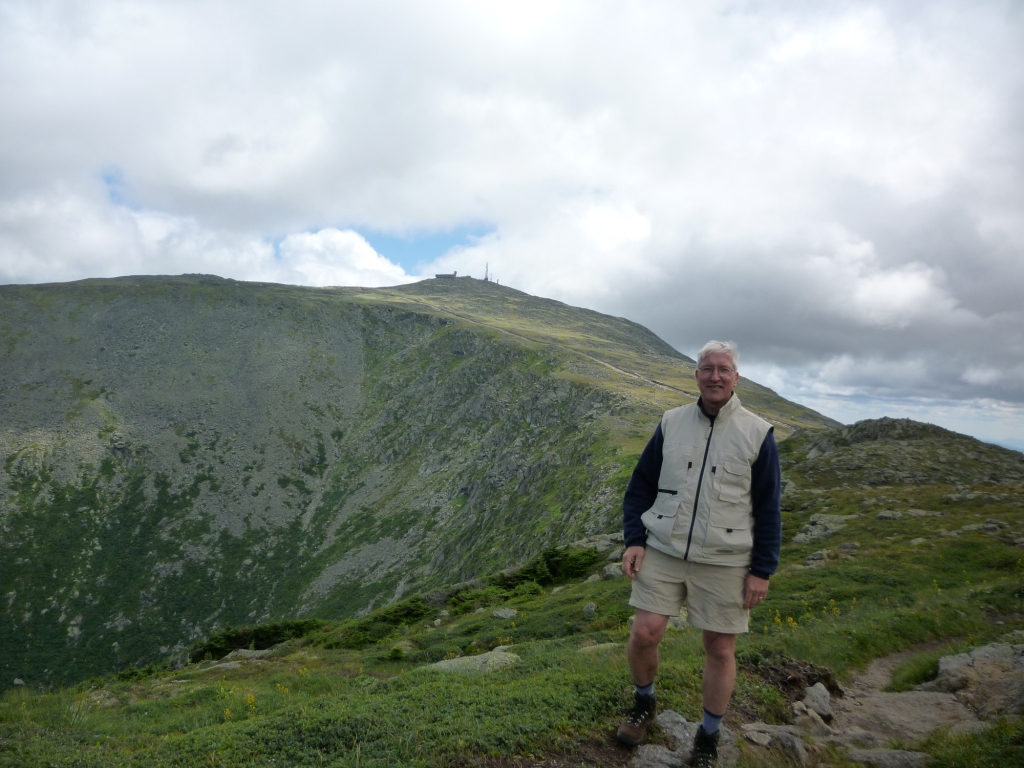 Looking to the south from the top of Mt. Clay is a superb view of the Northern Presidentials (left) and to the north is a view of Mt. Washington with the Great Gulf precipice (right). 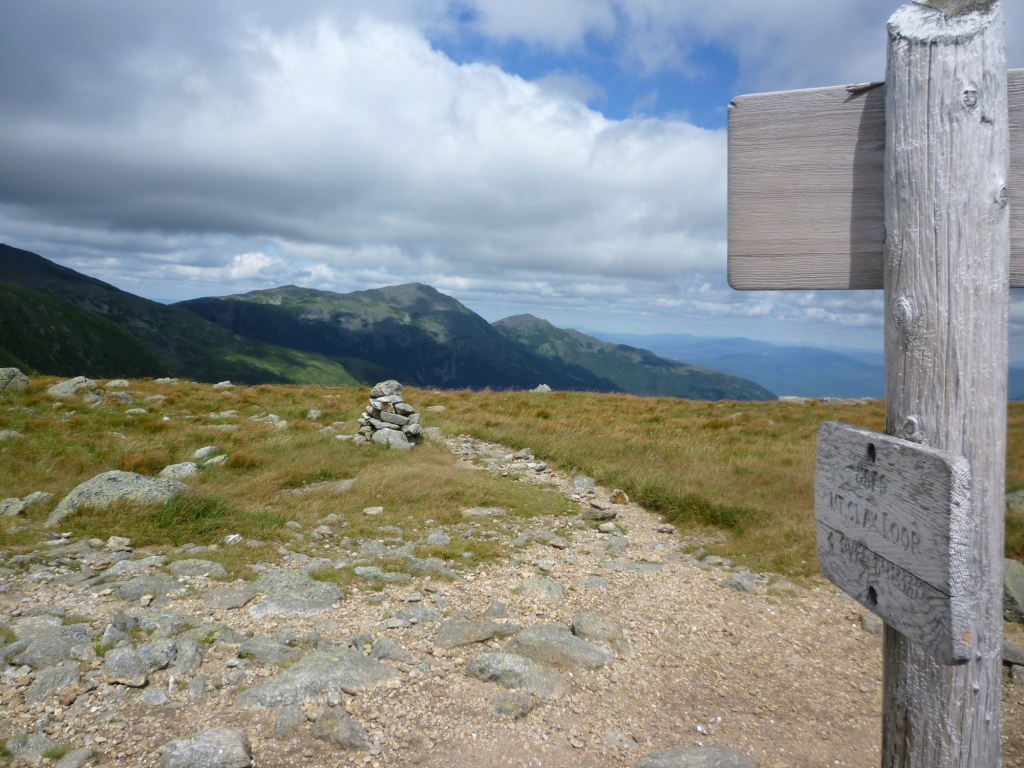 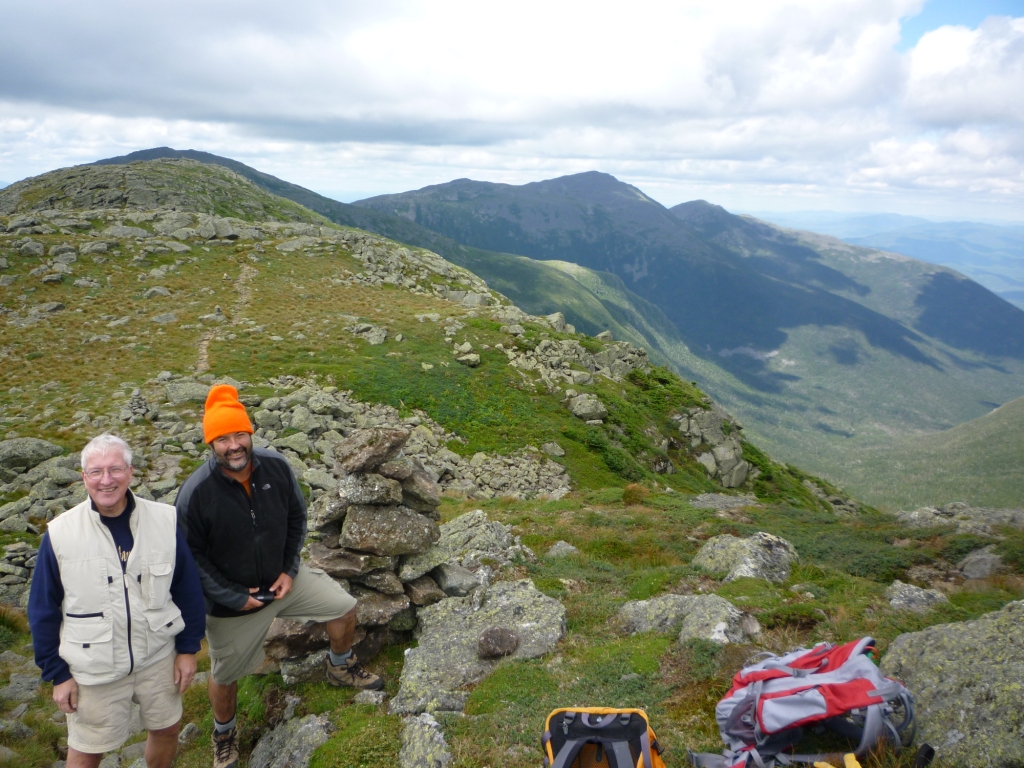 After Mt. Clay there are two other bumps to go over until the Loop rejoins the Gulfside Trail (see trailhead to the left, looking back towards the Northern Presidentials). From there you are a stone's throw from the Cog Railway trestle, and it was fun to watch the cars going up and down. The cog used to emit offensive black smoke but that seems to be gone now - they switched to biodiesel. It may be just as bad pollution-wise but at least you can't see it. So that's it - we had inspected the Mt. Clay Loop. But while we were at it we figured that we would rebuild one of the cairns in need of most repair, so we walked back past the first bump and found a pitiful-looking cairn that actually made trail-finding a small problem. So we demolished it and built it back, which is a lot of work. Regulation is that the cairn must be about 5 feet tall and sturdy enough that you can climb on it. Ours was not quite five feet tall, and we didn't try climbing on it because what if it collapsed? But it felt sturdy enough, and in any case it was a lot of work. Finally we saw two kids hiking by and they took our picture with the cairn (right). 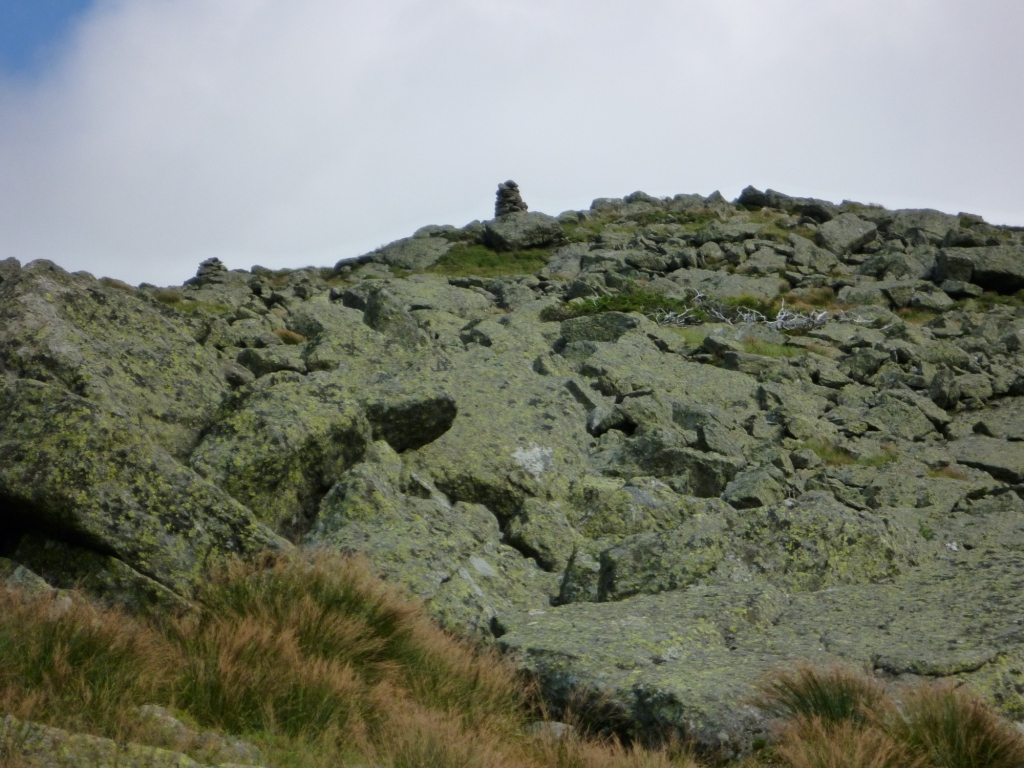 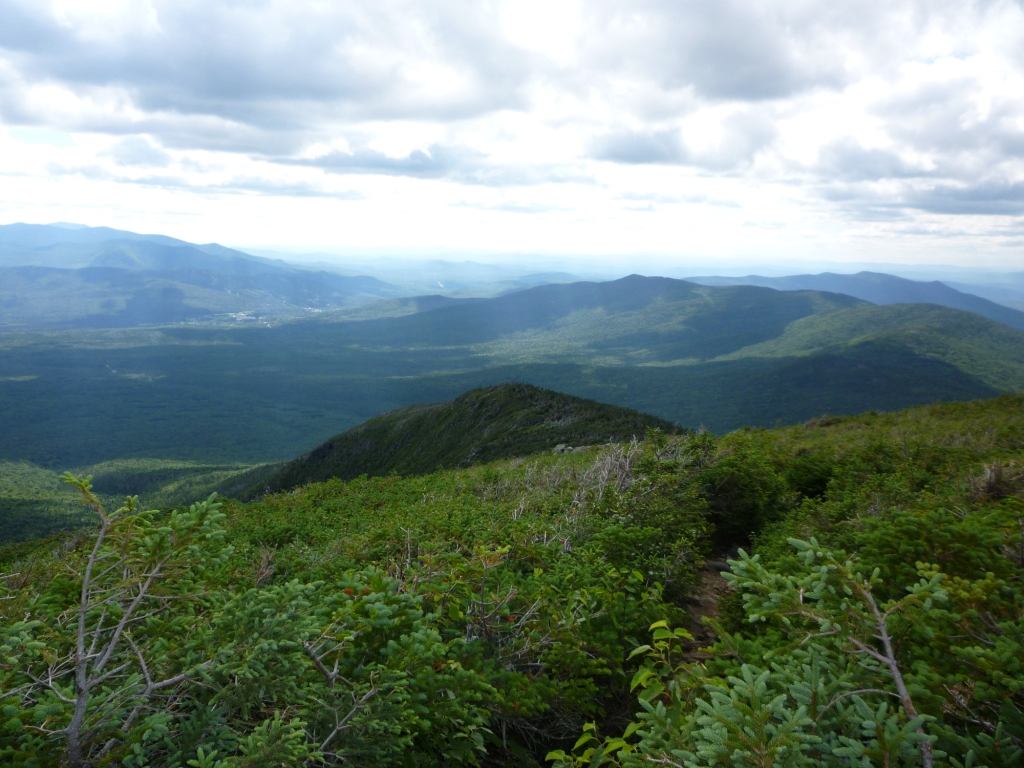 Our job was done for the day so we cut to the Gulfside Trail and from there we could still contemplate our cairn, proud and erect against the sky (left). We then went down to the trailhead by the Jewell trail, which has the bautiful attribute of having a long stretch where the trees are waist/shoulder-high, so that you feel like you're walking on top of an ocean of trees (the climb to Mt. Guyot is like that too). I will likely get to know the Jewell Trail very well in the years ahead, because it's the closest path to the Mt. Clay Loop which I have to service at least three times a year. Another time, another cairn!