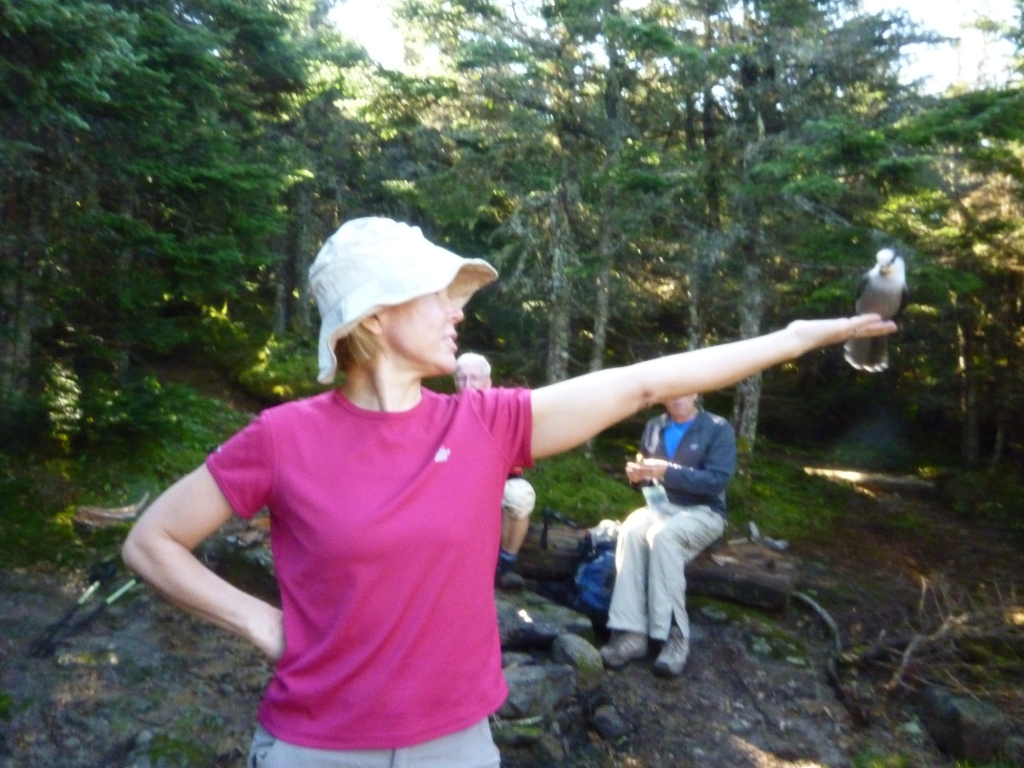 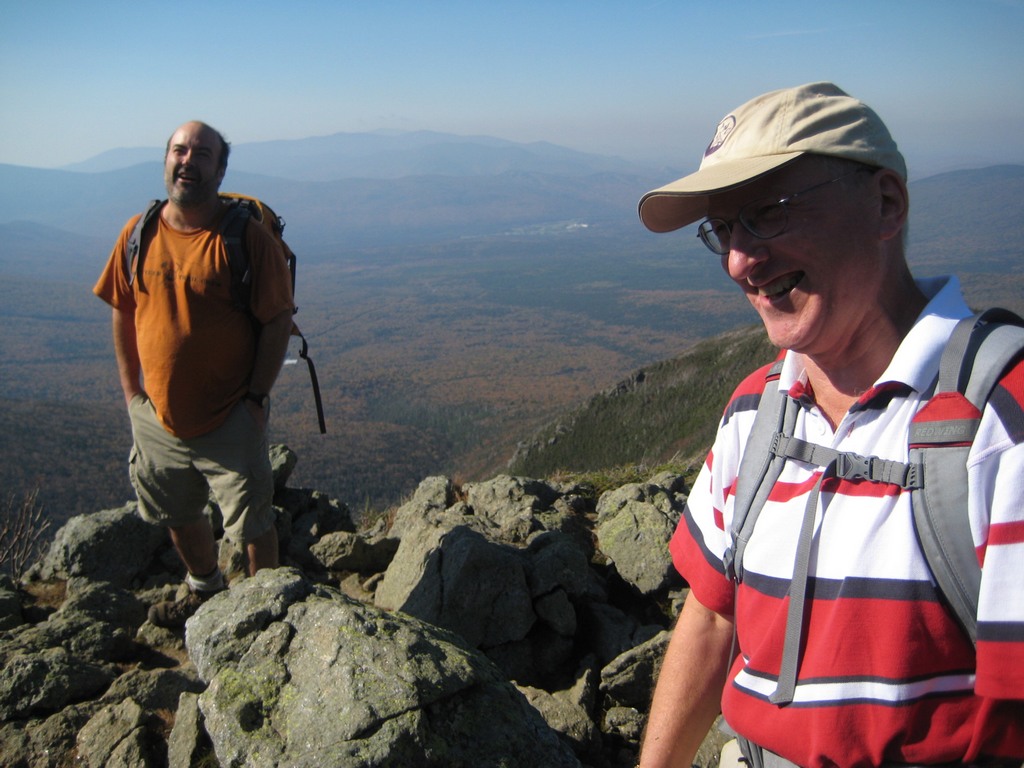 It was a picture-perfect Saturday on Columbus Day weekend. Mary Ann and Peter Gordon were off to climb Mt. Washington by the Jewell Trail. Roger Gagne and I joined them for part of the climb, planning to eventually diverge to perform my AMC trail maintenance on the Mt. Clay Loop - my third such trip of the season (see trip 1 and trip 2). Roger has been fantastic in helping me out with my trail maintenance duties. At 4,000' on the Jewell Trail are a few unofficial campsites, just below treeline. We took a break there and were very pleased to see grey jays eager to come eat out of our hands (left). Roger and I had seen them three weeks before on Mt. Webster, but they had been missing earlier in the season. They were very greedy here - filling their jowls, flying off, and coming back for more. They obviously were making provisions for the winter, which also explains why one is more likely to see them later in the season. Grey jays live at 4,000' all year long and stash their food under the bark of a special kind of spruce. Shortly after leaving the campsite we broke above treeline and it's a wonderful feeling to have the world at your feet (right). 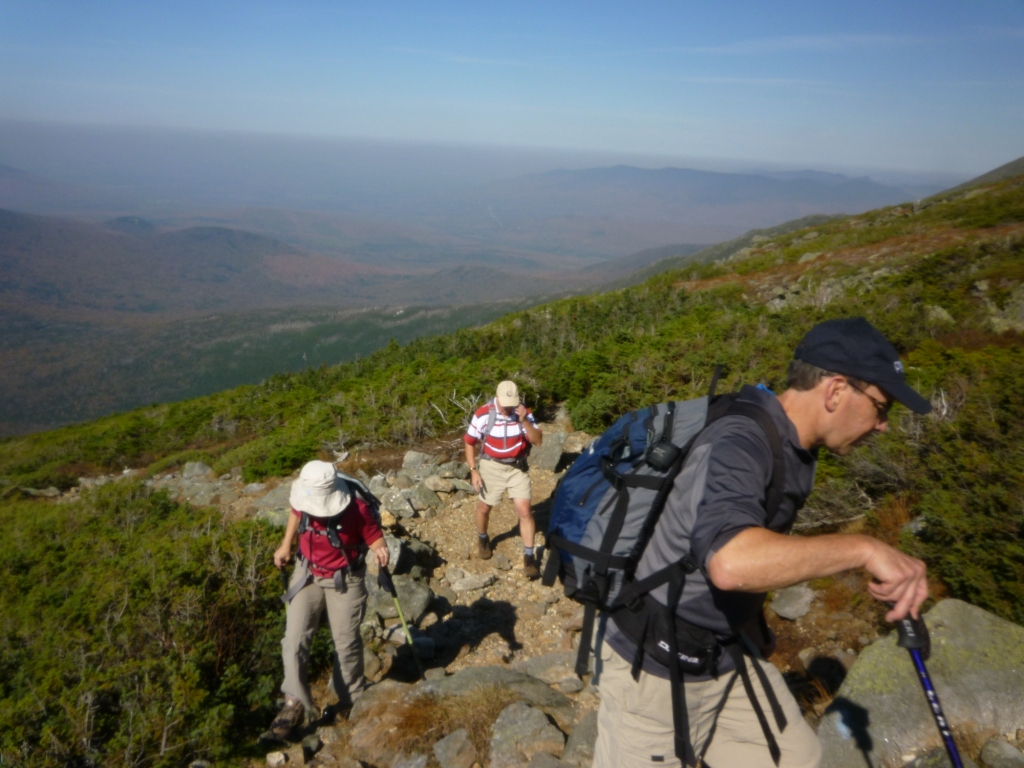 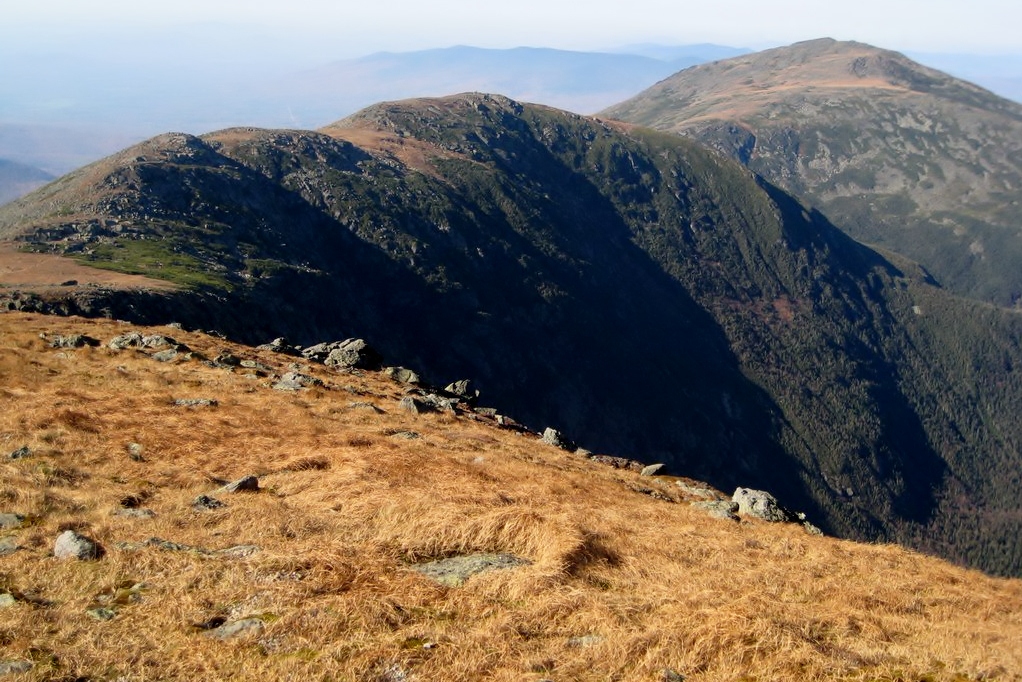 Above treeline the Jewell Trail becomes much rougher as it climbs to its junction with the Gulfside Trail at 5,200' (left). We turned right on Gulfside and parted with the Gordons at the Mt. Clay Loop junction. From above the junction Peter took a great picture of Mt. Clay (right). 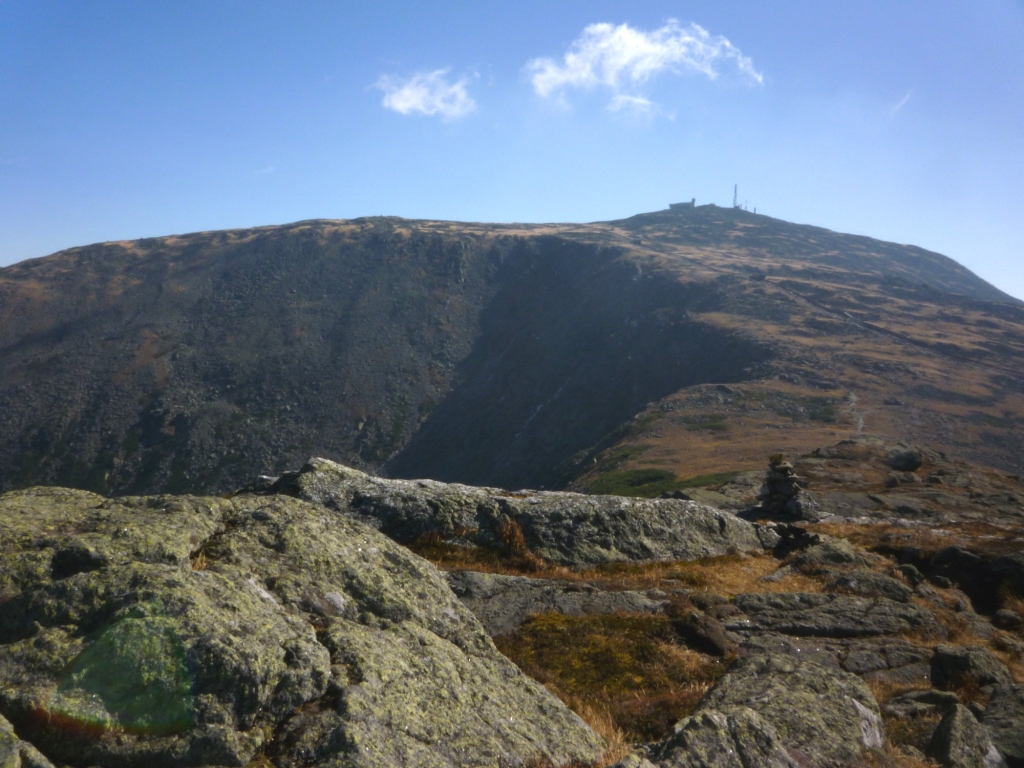 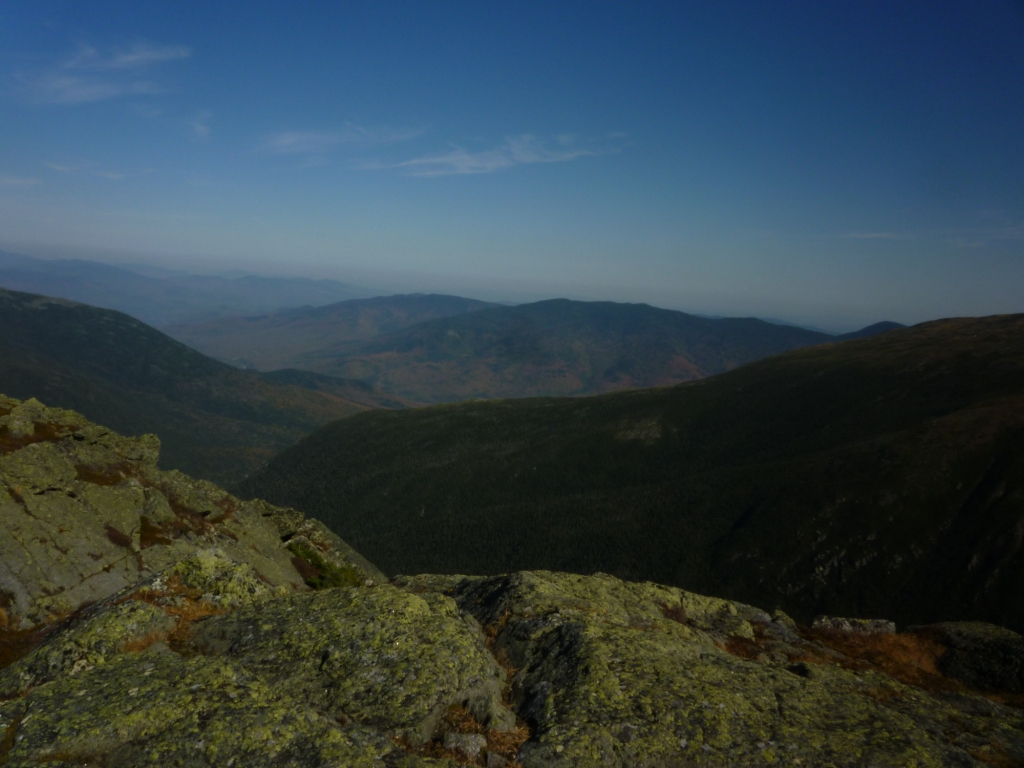 Roger and I headed north on the Mt. Clay Loop, checking out the condition of the trail including the cairns, the tread, and any other issues. All the while we took in the unique views for which Mt. Clay is world-famous. I have a zillion pics of these views from my previous maintenance trips (cf. the above links and references therein). Here are a few more. At left is the Great Gulf headwall looking towards Mt. Washington, with a number of iced-up waterfalls. At right is the view of the Gulf itself, and below left are the southern Presidentials wrapped in haze. 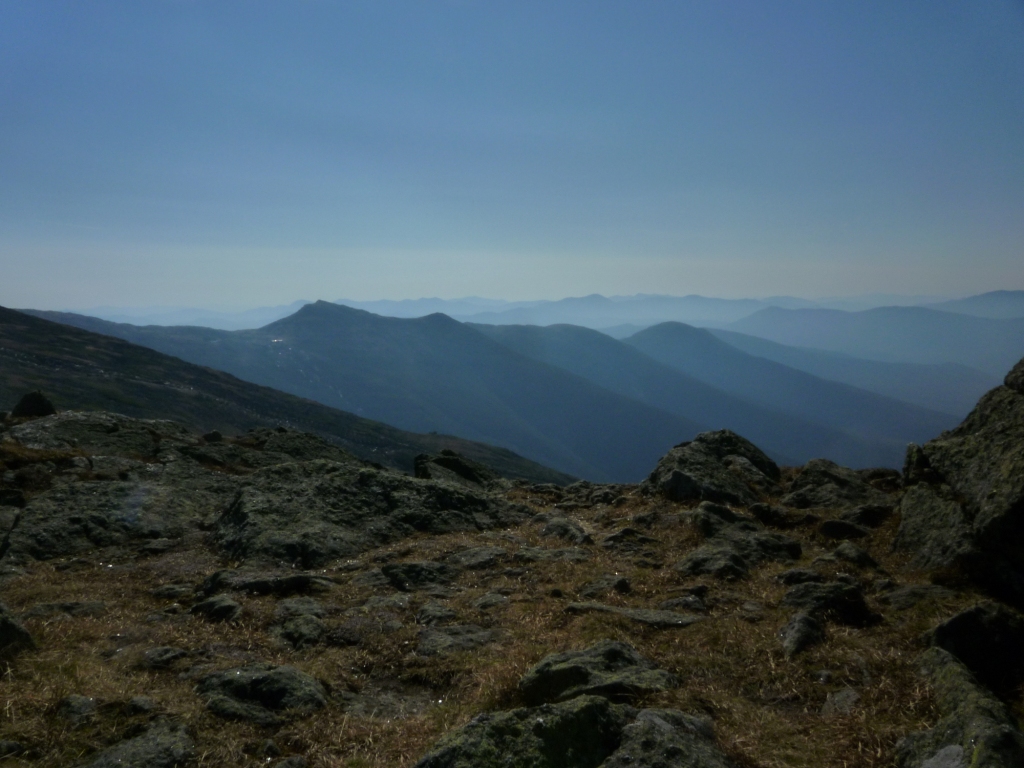 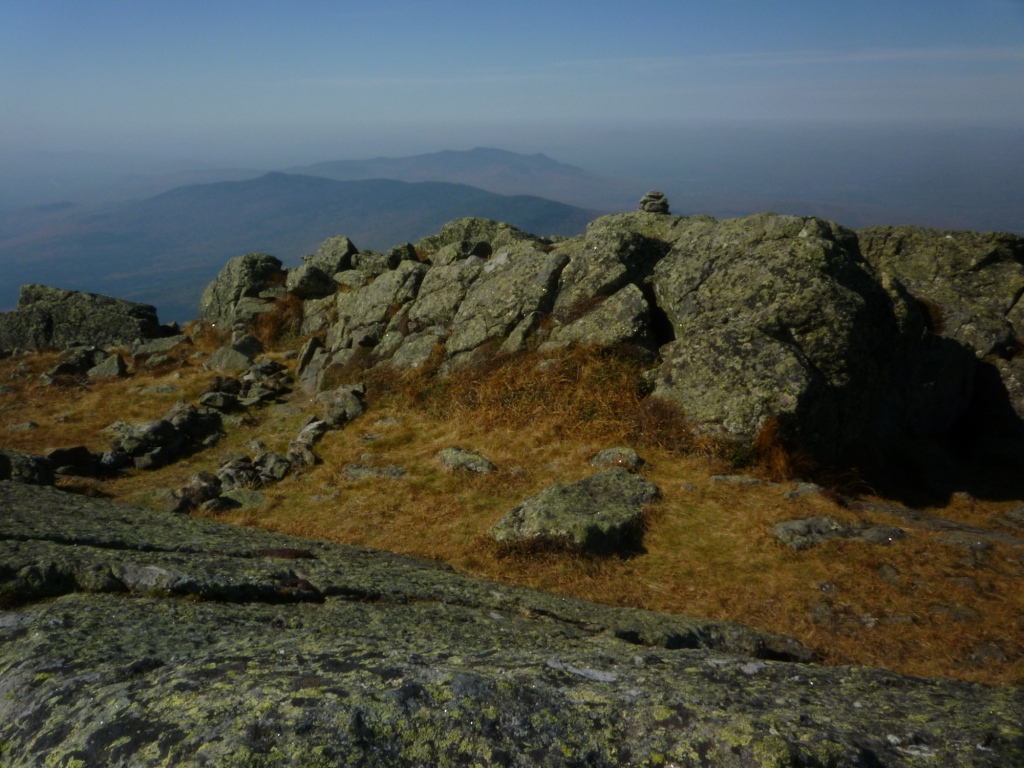 We got to the North Peak of Mt. Clay, building a small scree wall along the way where the trail was poorly defined, and stopped for lunch. One of our accomplishments for the year had been the construction of a scree wall on the North Peak, and we were pleased to find it in good condition (right). As we ate our lunch I did some statistics of people passing by, and all 15 of them took the trail between the scree wall, which pleased me enormously. Roger pointed out that I shouldn't count people but groups, since folks tend to just follow the group leader (i.e., there is significant autocorrelation within a group), but that's the kind of nerdy comment I'd expect from an actuary. In any case, 100% is 100% even with autocorrelation. In the shadow next to the scree wall is a memorial plaque for someone who fell to his death from Mt. Clay - you can't see it here but I have a blow-up of it in my report from a hike up Mt. Clay last year. 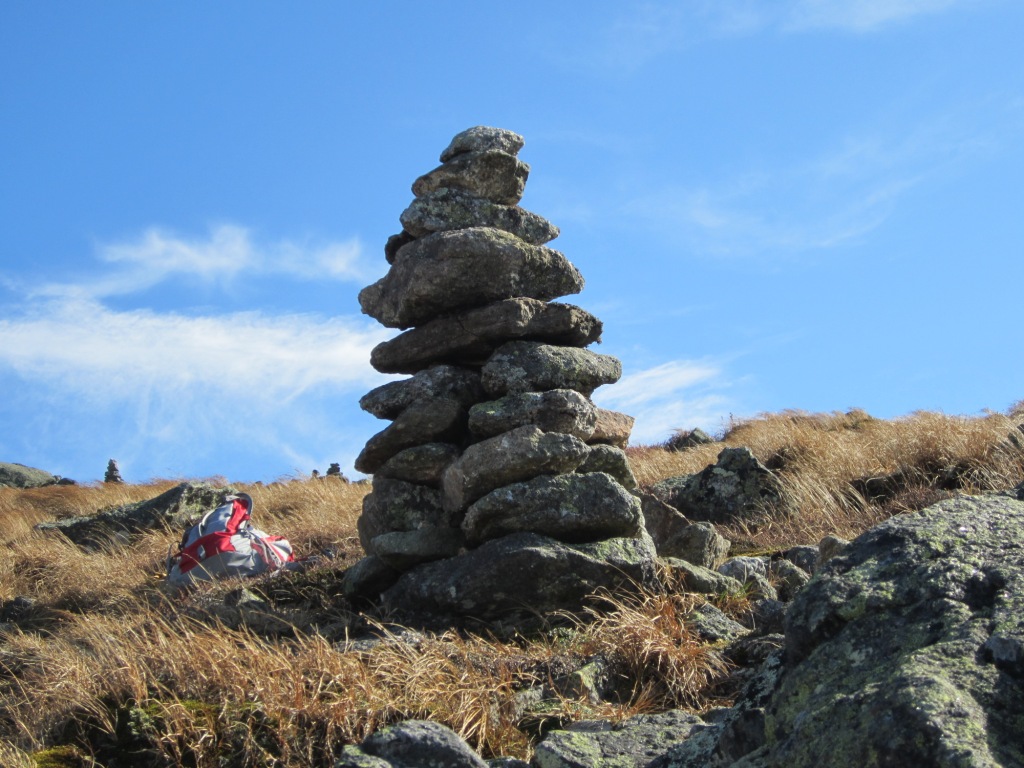 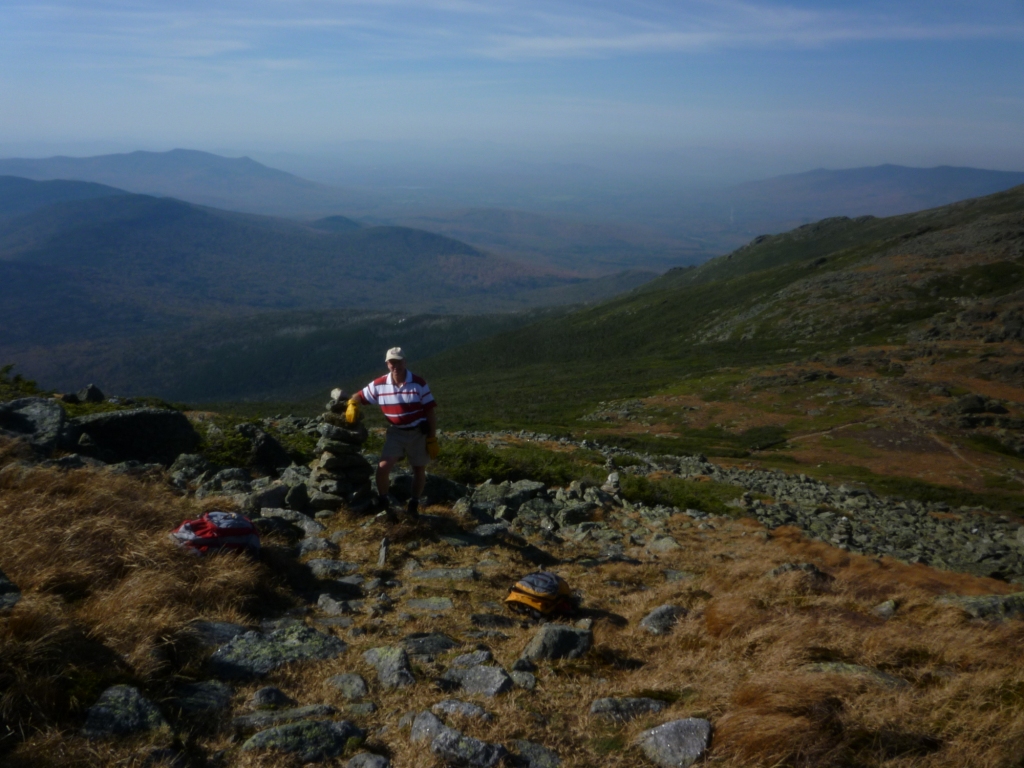 We walked on to the South Peak of Mt. Clay and down the southern slope where we knew that we would have some cairn-building to do. All the way we checked out the trail and found it to be flawless. On the southern slope we set to work on rebuilding two subpar cairns. Our first cairn was a true work of art (left). Our second cairn was not as inspired but still adequate (right). After two years of work (and much of it with Roger's help), I can state with confidence that the Mt. Clay Loop is in perfect shape. Maybe this winter will wreak some destruction - stay tuned for my next visit in the spring. 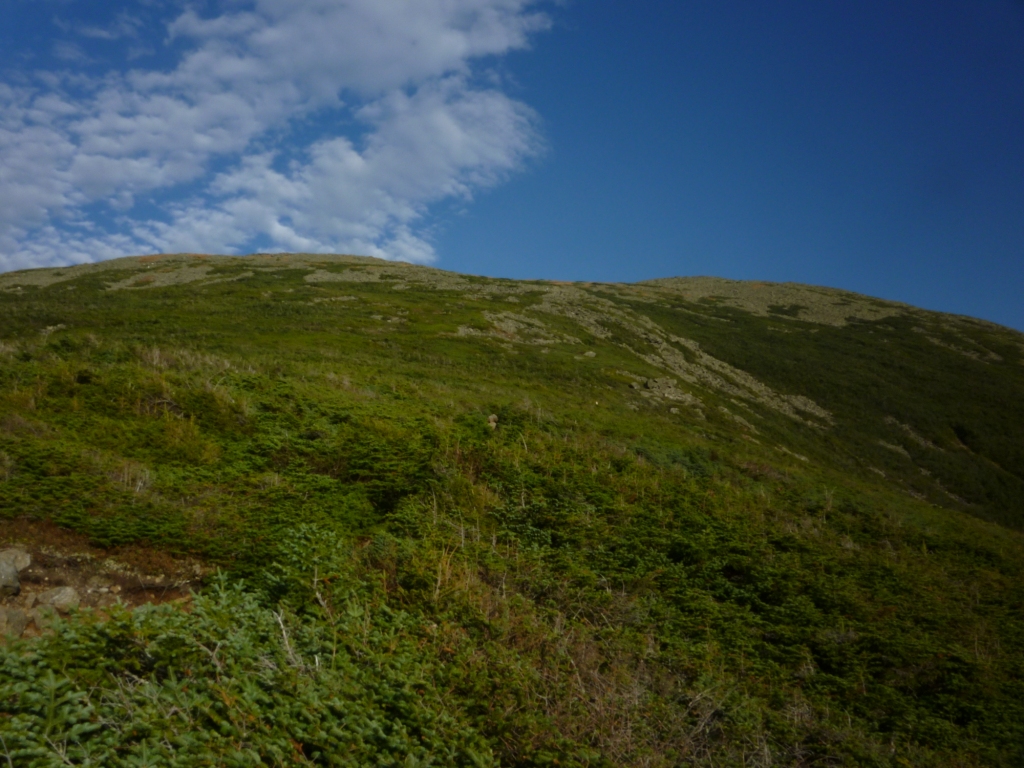 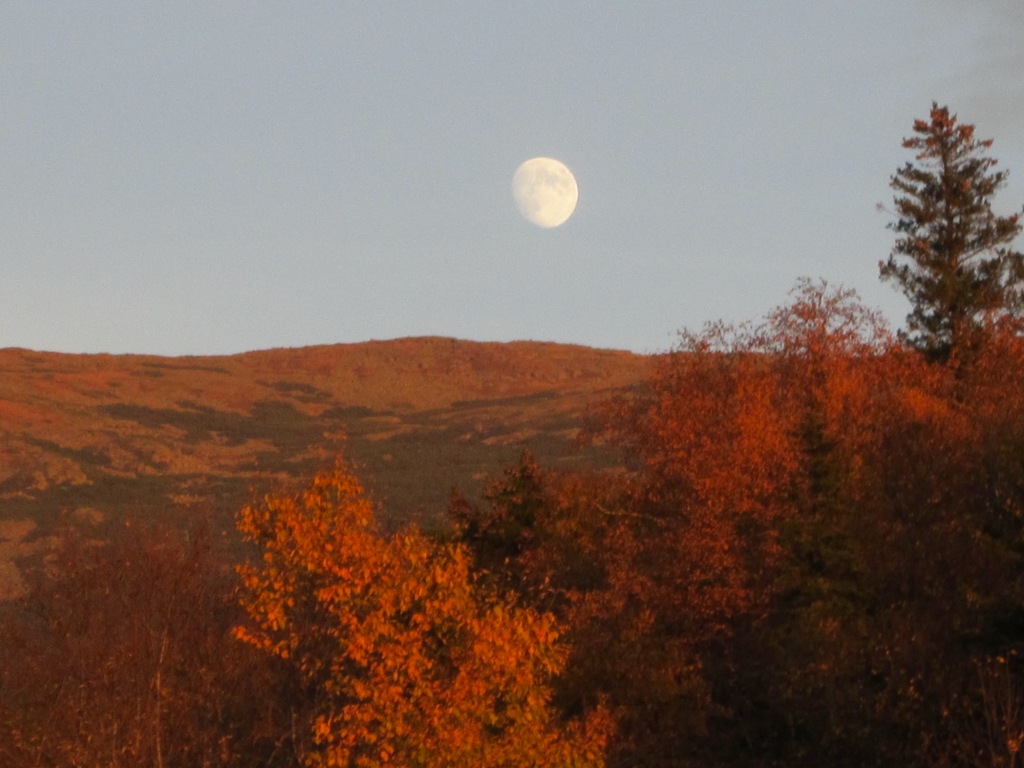 Our job was done for the day and we returned via the Gulfside Trail to the Jewell Trail and then down. Before disappearing below treeline I took one more picture of Mt. Clay in the evening light (left). Roger and I know the Jewell Trail like the back of our hands and can really hustle down. We passed a number of groups, including the Gordons who were doing great despite Mary Ann's knee problems. A few of the groups were having a hard time, asking us how far down the trailhead was, how much time until darkness, when would it get easy, etc. It seems that some had taken the Cog Railway up and decided to hoof it down, not realizing that White Mountains trails are no walk in the park. We saw a group with a big dog who had cramped up and was not moving, and we left them our water - Peter would tell us later that the dog had to be carried out on a stretcher. As we got close to the trailhead we saw a distraught lady coming up with a flashlight to assist the dog. We exited the woods in the Cog Railway parking lot and Roger took this great picture of the moon rising above Mt. Washington in the evening light (right).