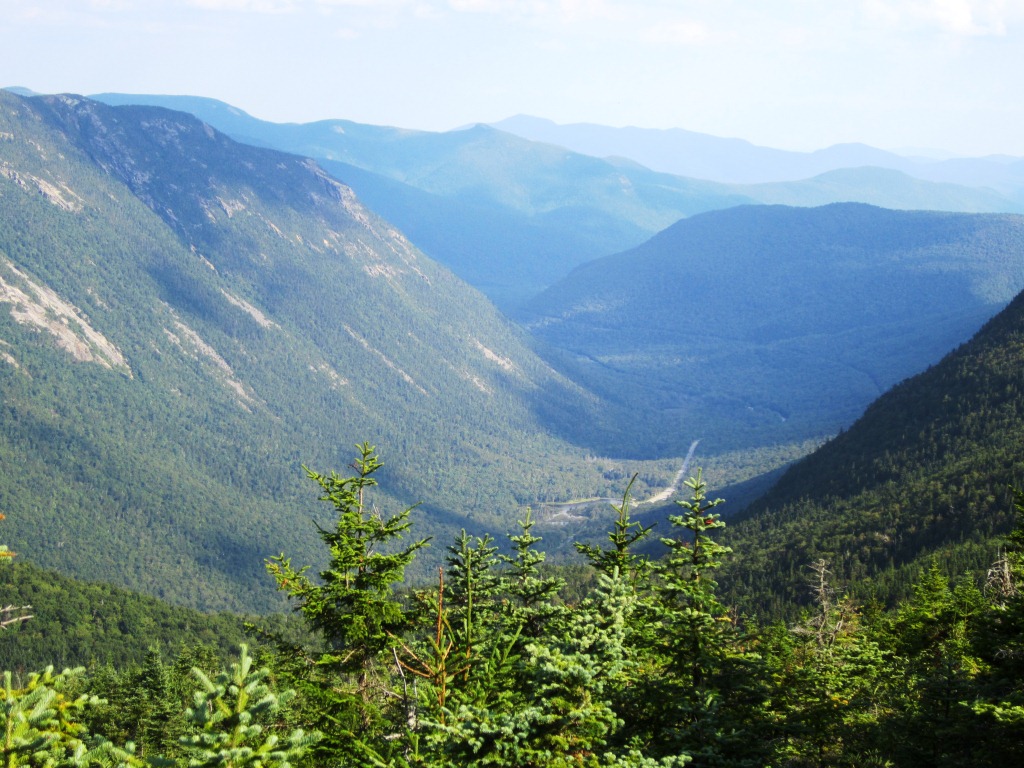 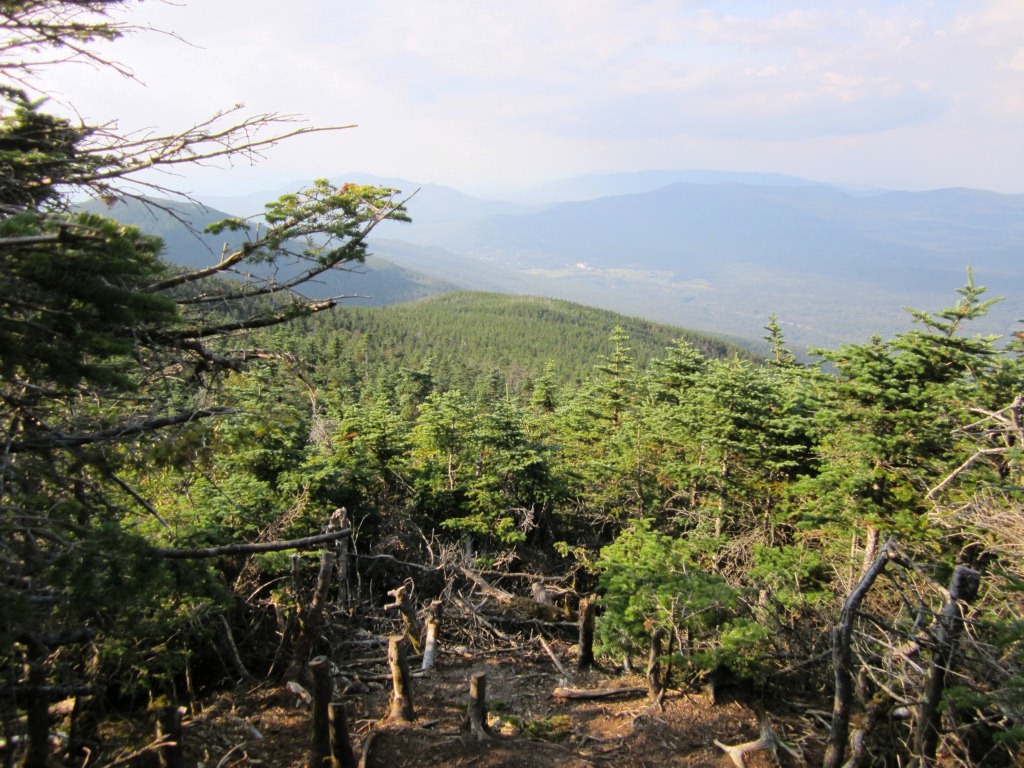 I had spent the week working from Bretton Woods. One short hike that I did for exercise was to Mt. Avalon and Field, and I can't resist showing you the great view down Crawford Notch to be had from Mt. Avalon with little effort (left). Field is the polar opposite - a 4,000 footer with no views. But I was surprised to see that someone had hacked trees at the summit to provide at least a viewpoint toward Bretton Woods (right). That's a wonderful practical solution to fix the problem of viewless summits, but doesn't seem in keeping with the sourpuss policies of the US Forest Service so I wondered about the story behind this. The only other place in the Whites where I had seen tree cutting for views was on the Gorge's Brook Trail up Mt. Moosilauke, but that land is owned by Dartmouth College which doesn't have to abide by USFS idiocy. 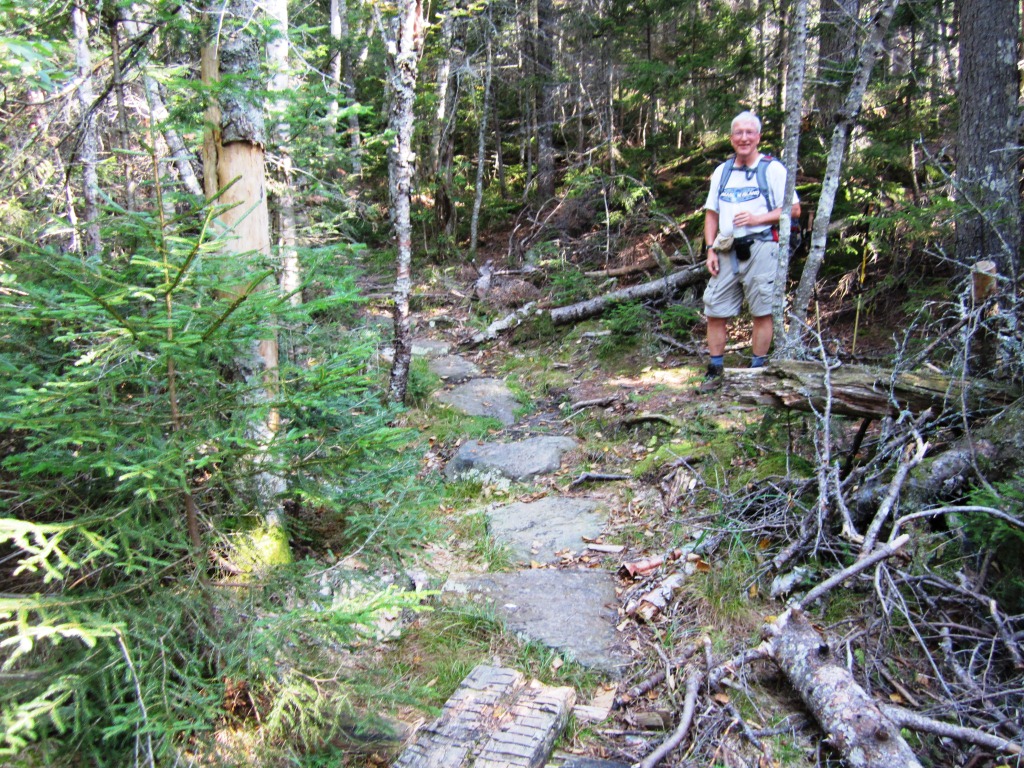 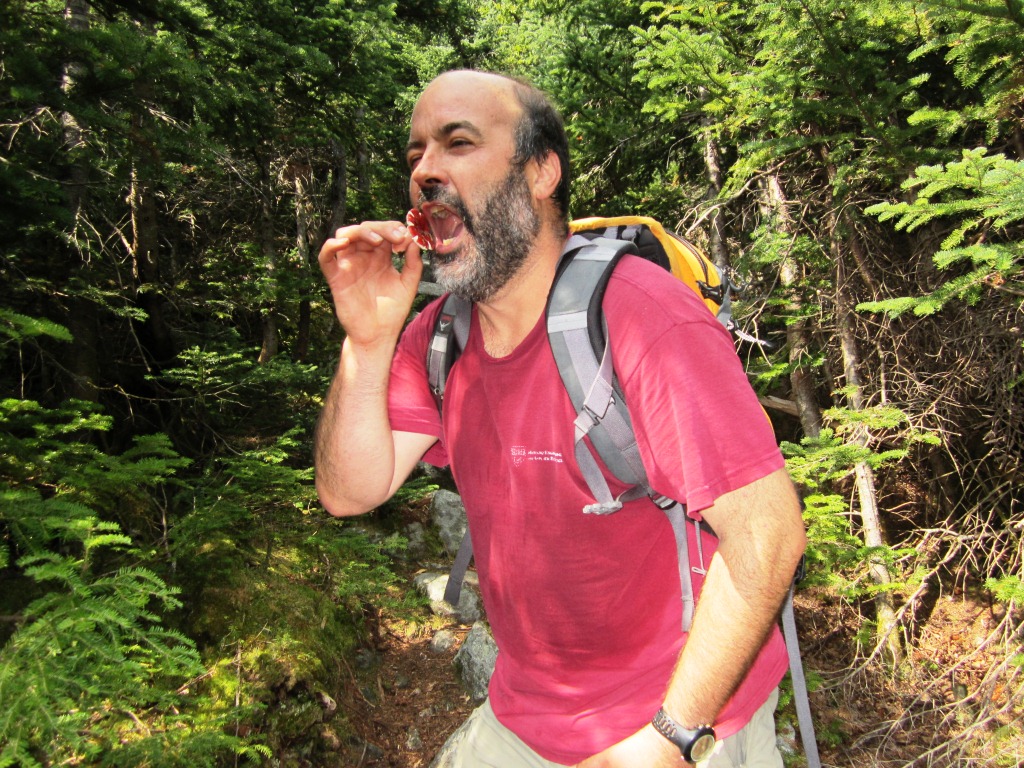 Anyway, what I really want to share with you here is my hike with Roger Gagne up the east side of Mt. Madison the following Saturday. We went up the oddly-named Daniel Webster Scout Trail and down the Osgood Trail, wrapping up the loop with the Great Gulf Trail and Great Gulf Link. There were no cars at the Dolly Copp trailhead, which I found surprising after passing the parking overflow at the Appalachia trailhead. So we figured we would be pretty alone on the trail, though likely not at the top. The Daniel Webster Scout Trail starts off very gently from the 1,250 feet trailhead, and exhibits fine trailsmanship such as these strategically placed stones (left). The floor of the forest was carpeted with mushrooms of all kinds. When I was a kid, my parents used to take me mushroom hunting in the Jura mountains and I know which mushrooms are good there - but here I unfortunately have no idea. I need to fix this ignorance because wild mushrooms are so good. One thing I know is not to eat the red mushrooms (right) - the prettiest are the deadliest. 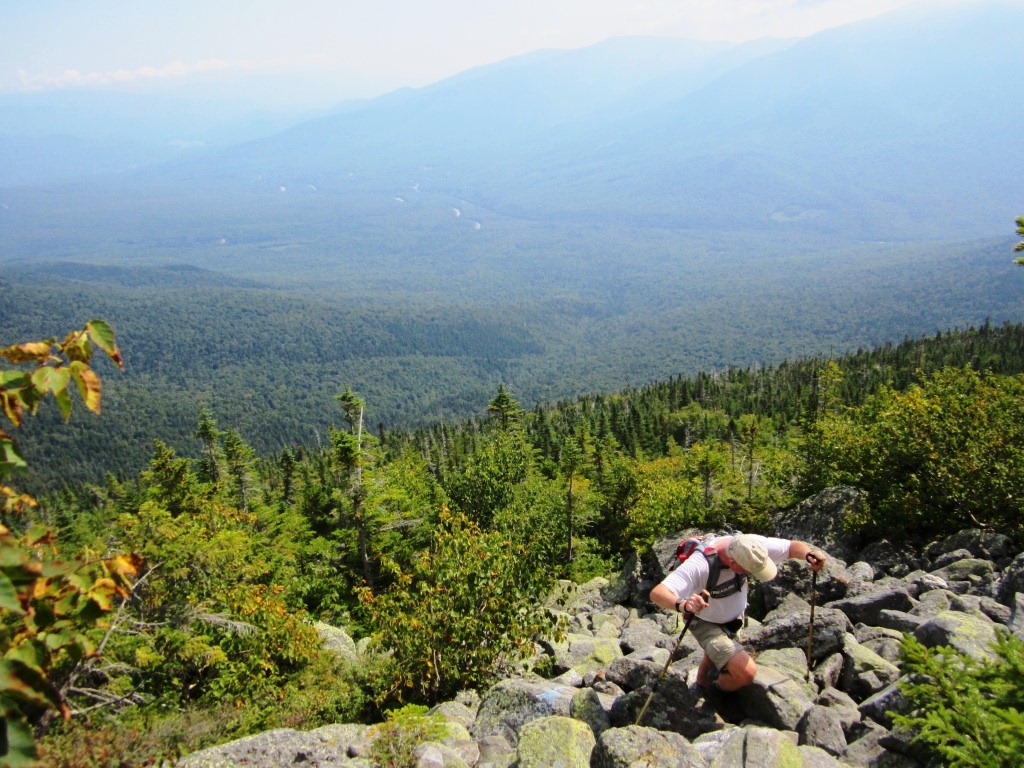 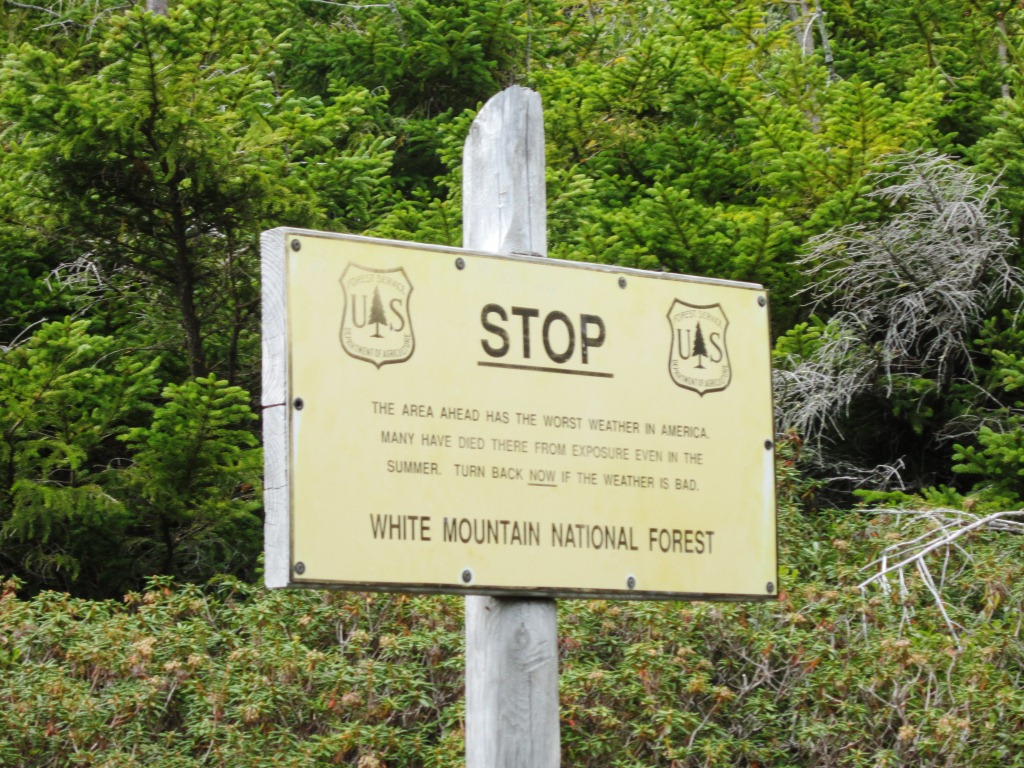 Above 3,000 feet the trail became rougher (left), as is common in the Whites. At 3,800 feet it emerged in the open on a rock talus with the familiar sign warning you of impending death if you dare to continue (right). I loved to see that sign when I was teaching my boys to hike ten years ago - nothing energized them more than this prophecy of doom. Anyway, we ignored the dire warning but soon realized that we had been tricked in another way. From there until the Osgood Trail Junction at 4,800 feet the Daniel Webster Scout Trail is not a trail at all - just a jumble or rocks with cairns to guide you. It is a real leg-buster. We met a distraught lady (only person we would see on the trail) who was planning to cut her hike short because it was so tough - she seemed to know what her options were so we pushed on. It does seem that all trails up Mt. Madison are very rough (except perhaps the one from the hut). 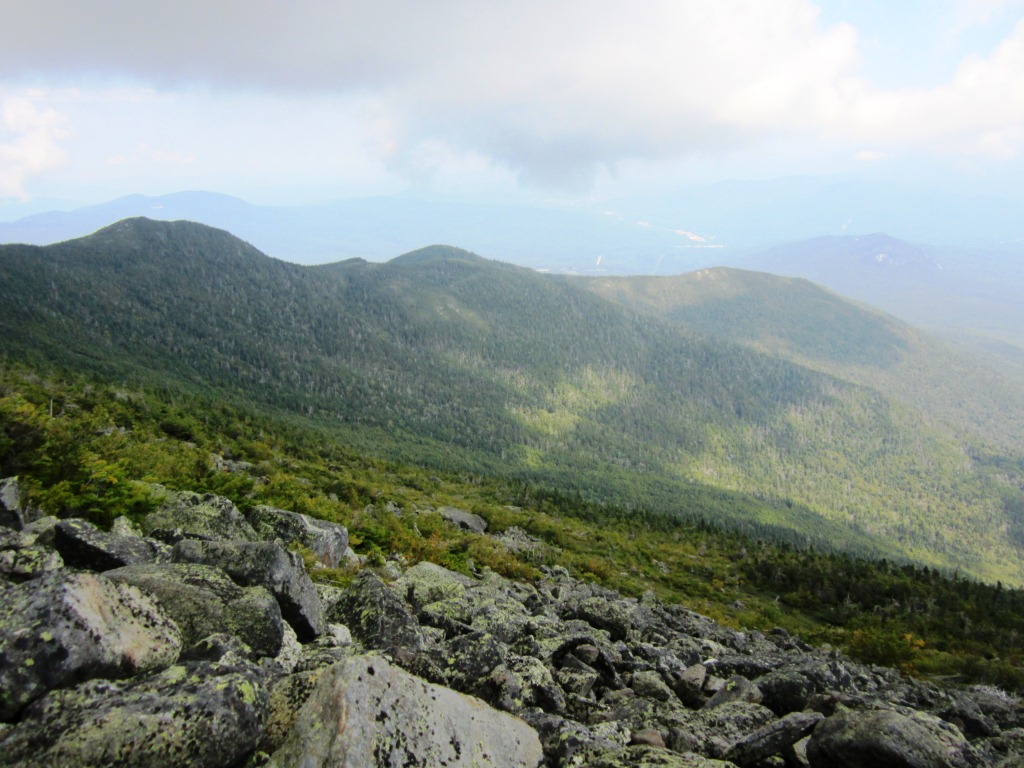 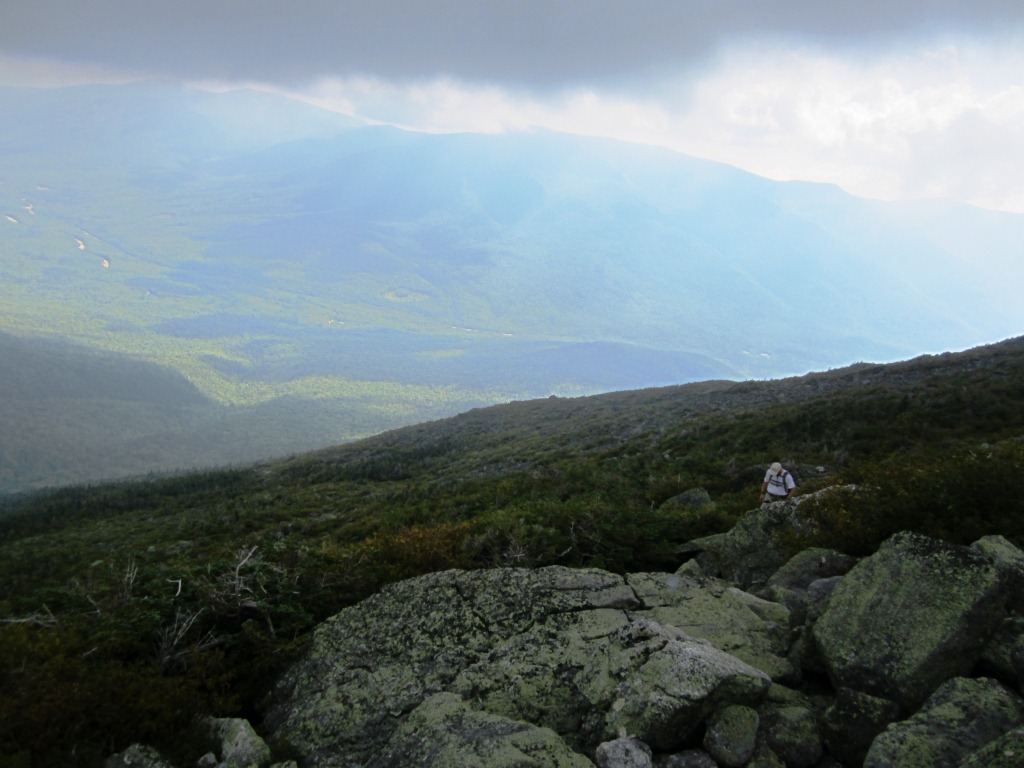 However, one benefit that all these trails have is that they get you in the open quickly so you can enjoy views. Above 3,800 feet we were thus already effectively above treeline (right). It was hazy but we had a good up-close view of Howker Ridge (left). 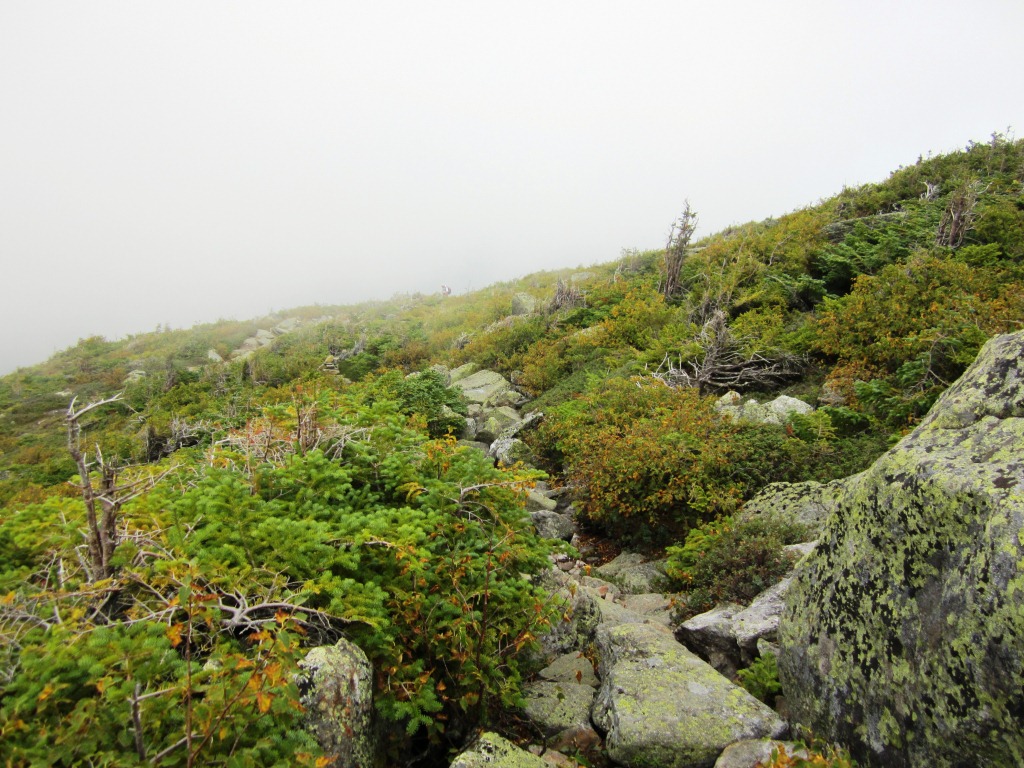 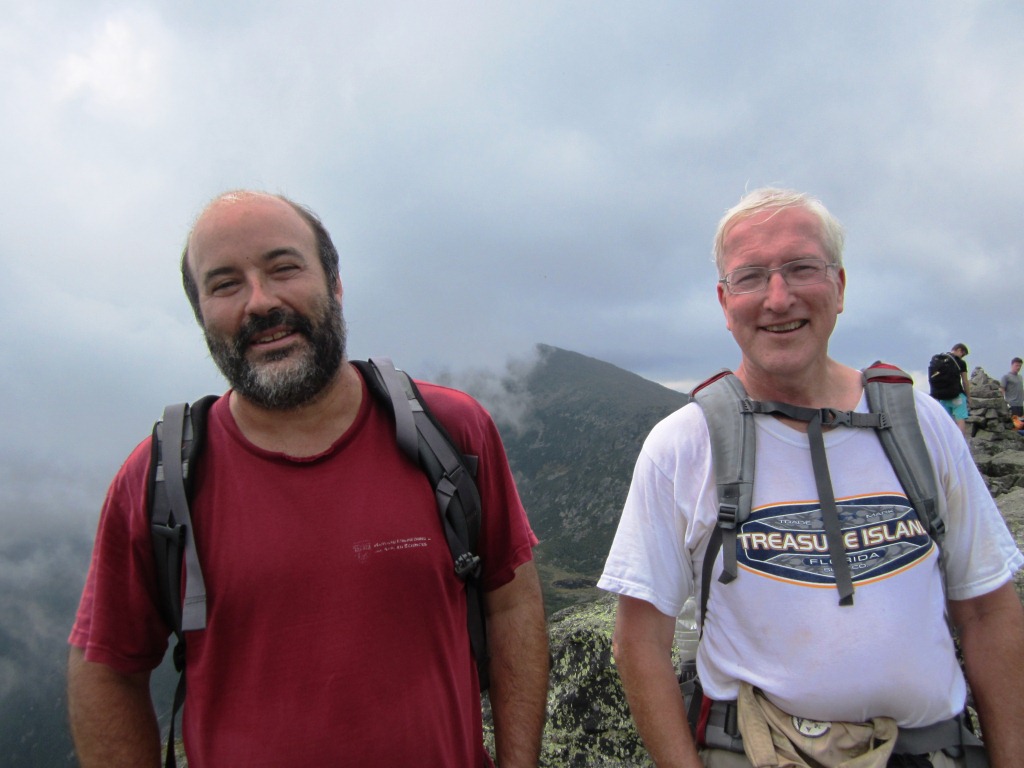 We got to Osgood Junction and fog was rolling in and out (left). Roger had enough of that boulder-hopping, leg-busting trail and declared that if Mt. Madison was foggy he wasn't going any further. But as luck would have it the fog momentarily cleared so on we went, climbing the Osgood Ridge and finally arriving to the top of Mt. Madison in intermittent fog to get our picture taken (right). 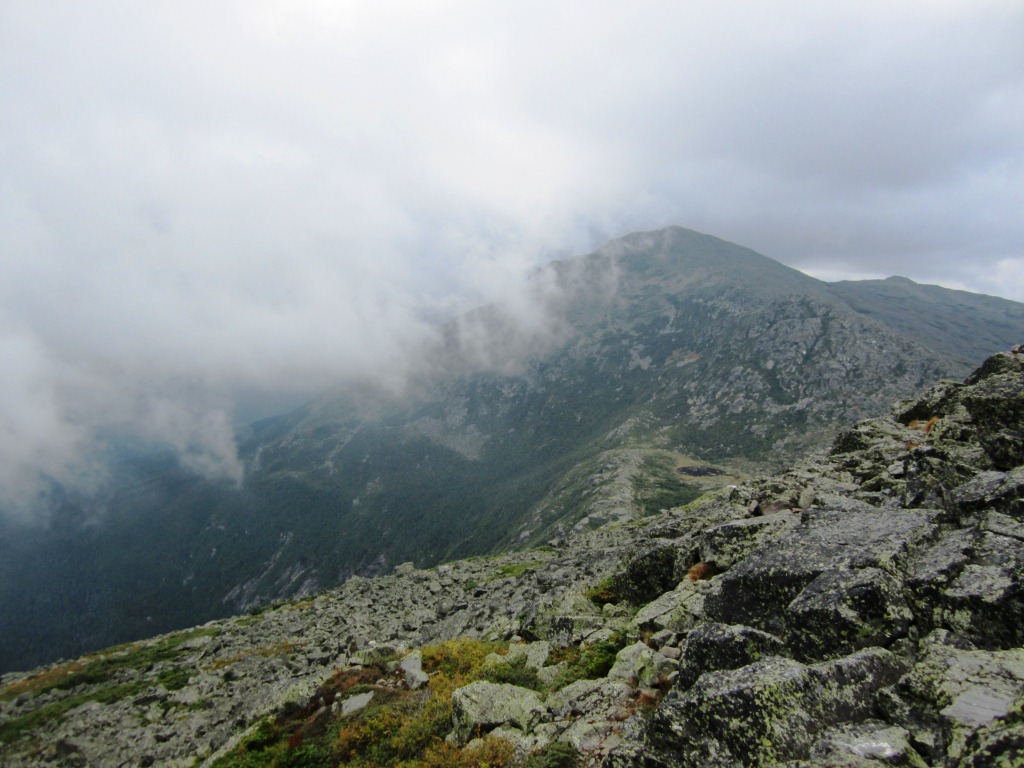 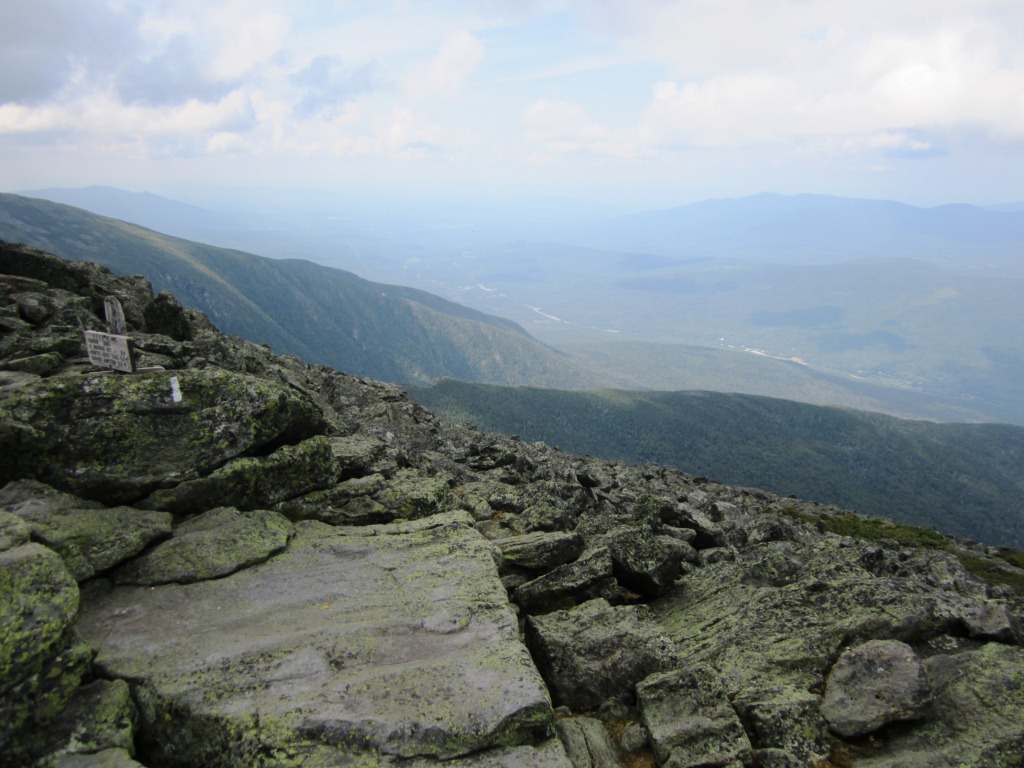 I love to see the fog rolling in and out when I'm in the Presidentials - it gives an awesome and mysterious air to the scenery. There was a moderate crowd at the top, and we found a flat slab of rock to eat lunch. Mt. Madison has a fantastic view of the Great Gulf and Mt. Washington, but for now it was mostly wrapped in fog (see previous hike to Mt. Madison for a clear-sky view). We had some good views looking north (right) and west towards Mt. Adams (left). 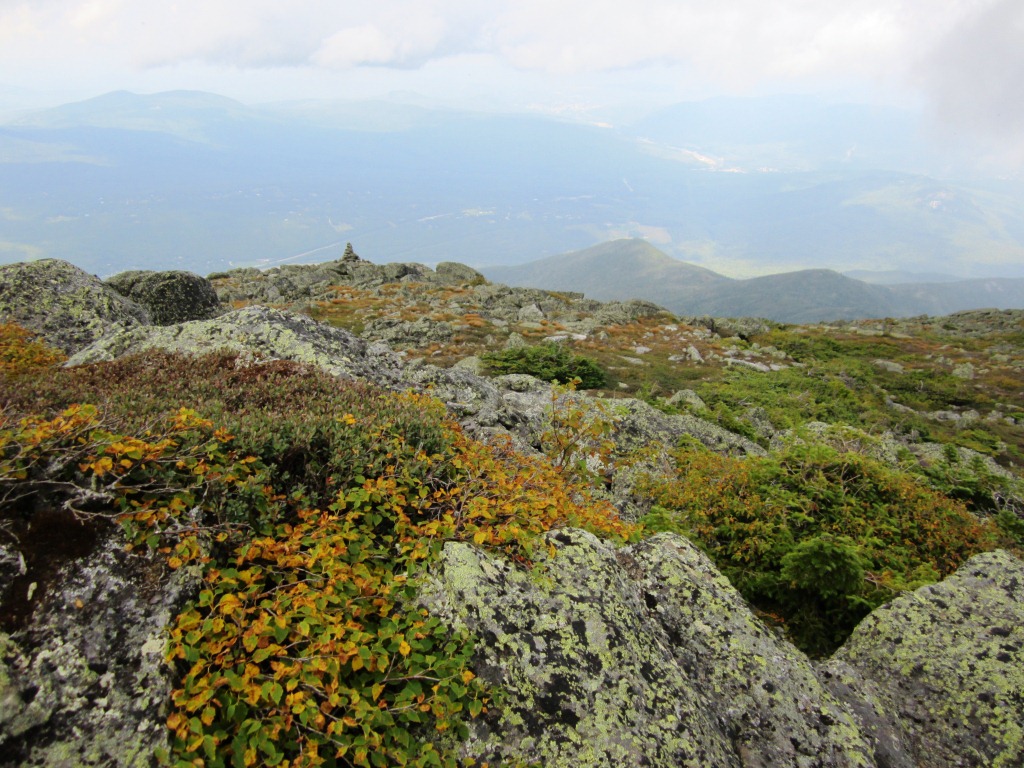 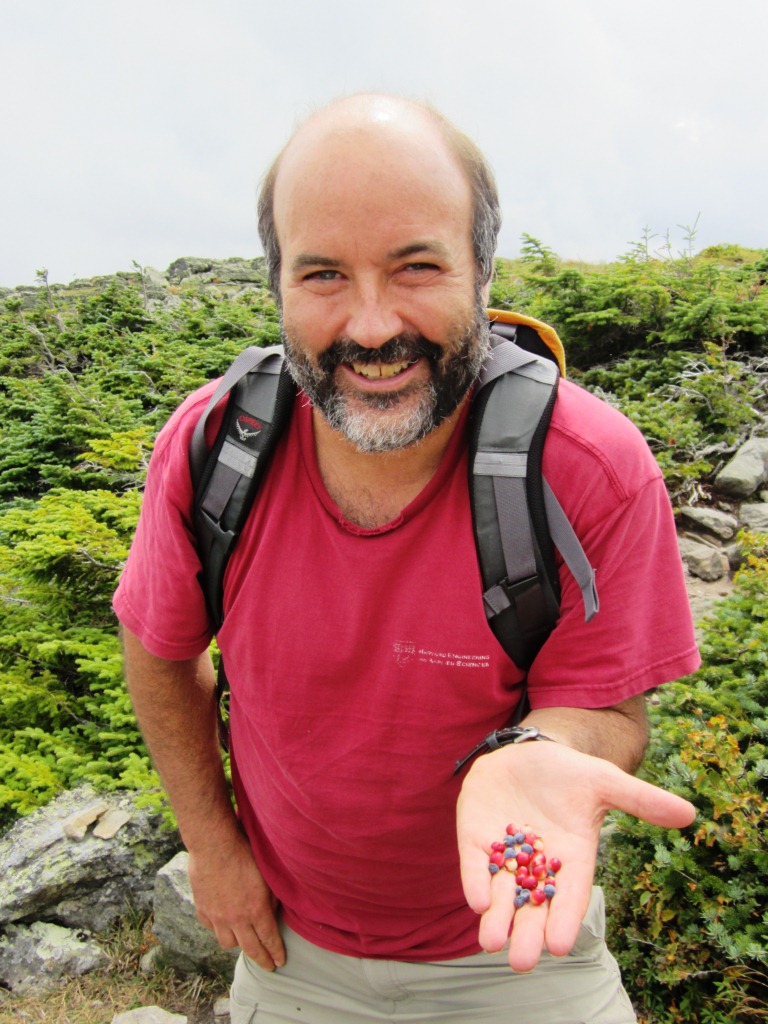 We then hiked down Osgood Ridge and this was the best part of the hike. The Osgood Trail keeps you on the ridge above treeline until 4,100 feet. It is part of the Appalachian Trail so some minimum trail standards have to be enforced - it is rough but not just a jumble of rocks. I was pleased to see color in the tundra vegetation - first colors of fall (left). And the ground was carpeted with blueberries and cranberries. I highly recommend the blueberry-cranberry mix - the sweetness of the blueberries and tartness of the cranberries make for a great combination (right). 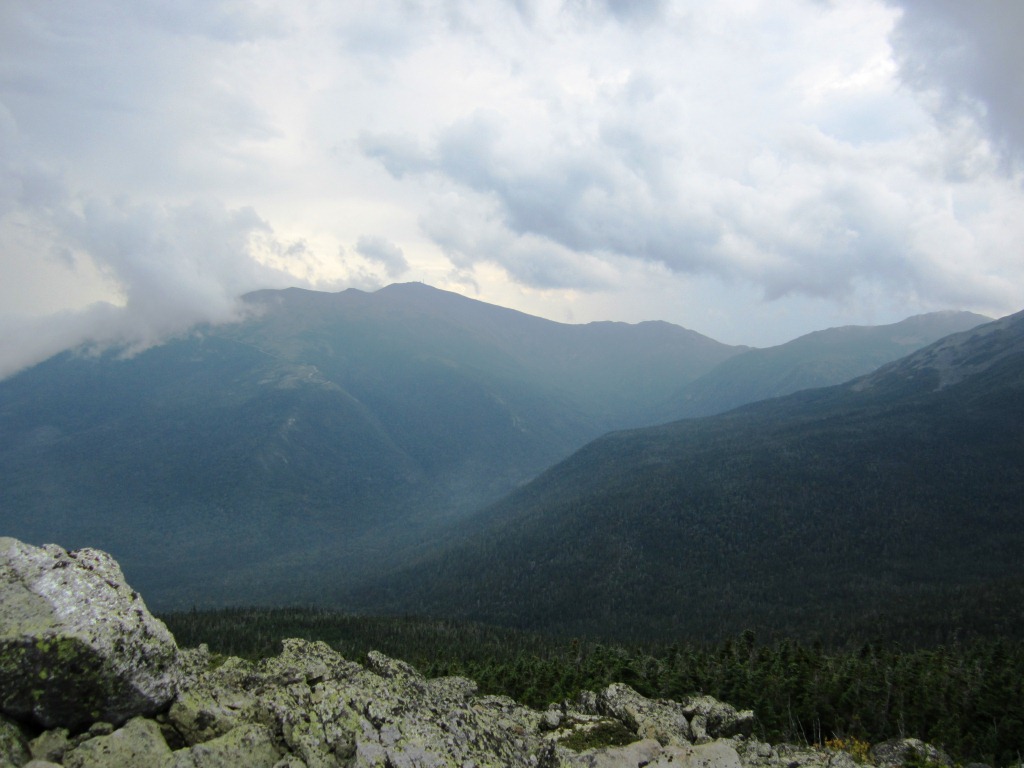 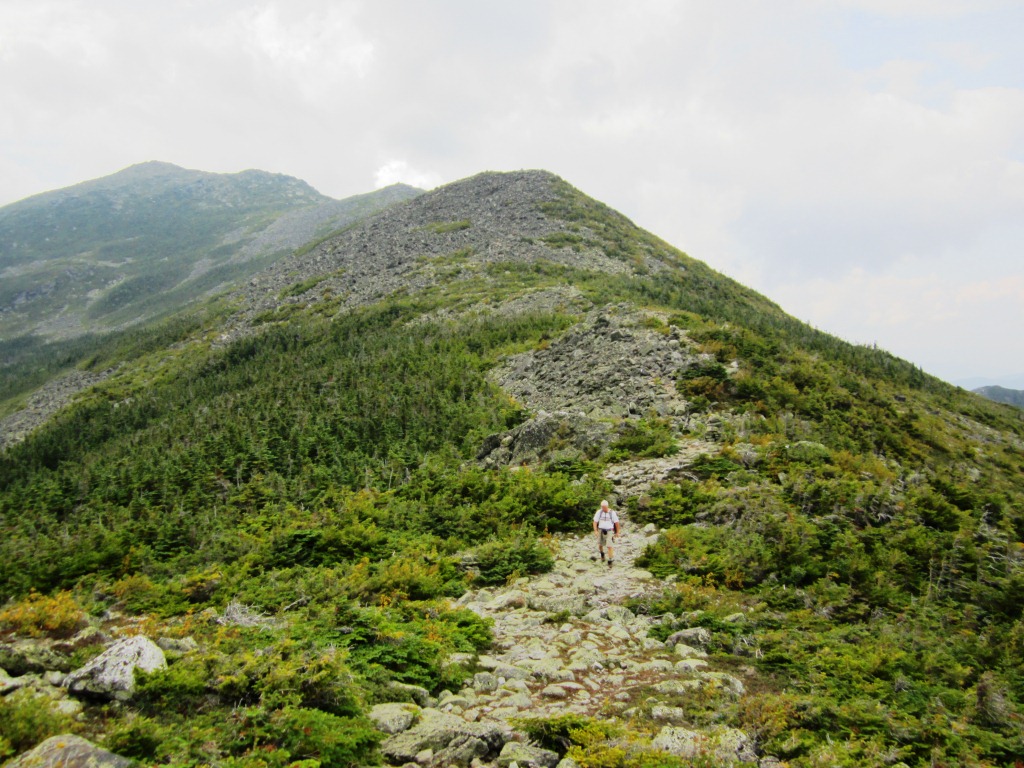 As we went down the Osgood Trail the fog to the south gradually cleared, and we had good views of the magnificent Mt. Clay (left - somehow Mt. Washington also got in the picture) and of Mt. Madison above us (right). We stopped for a while, reflecting that the views from Osgood Ridge were actually better than those at the top of Mt. Madison and without the crowd. 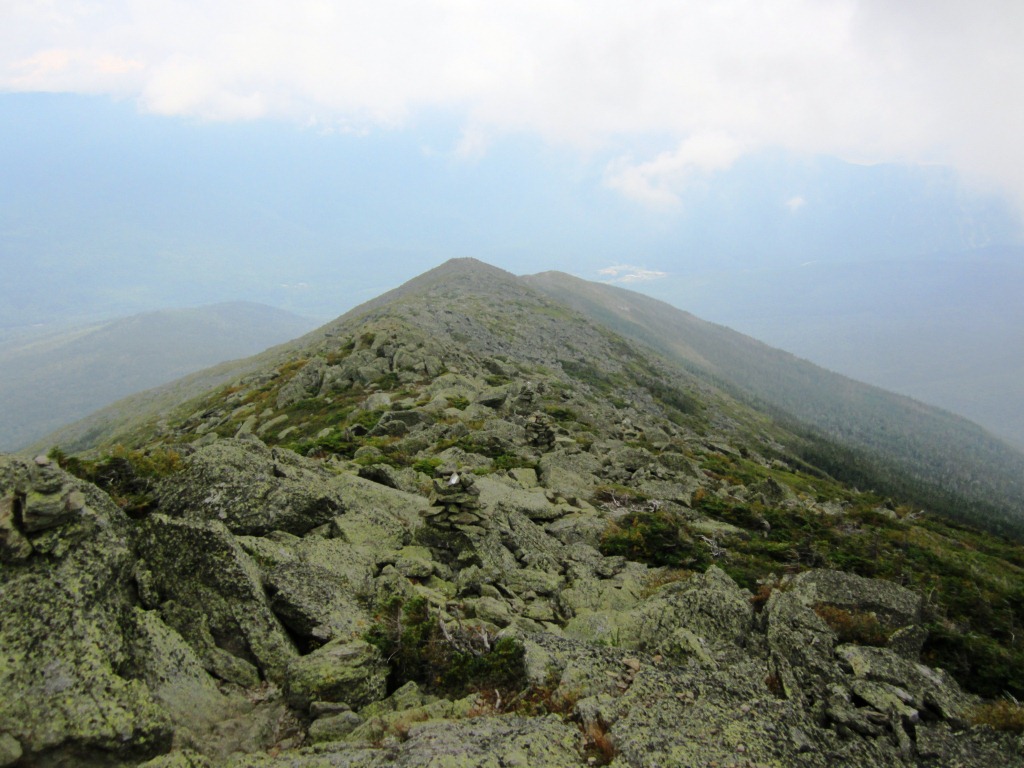 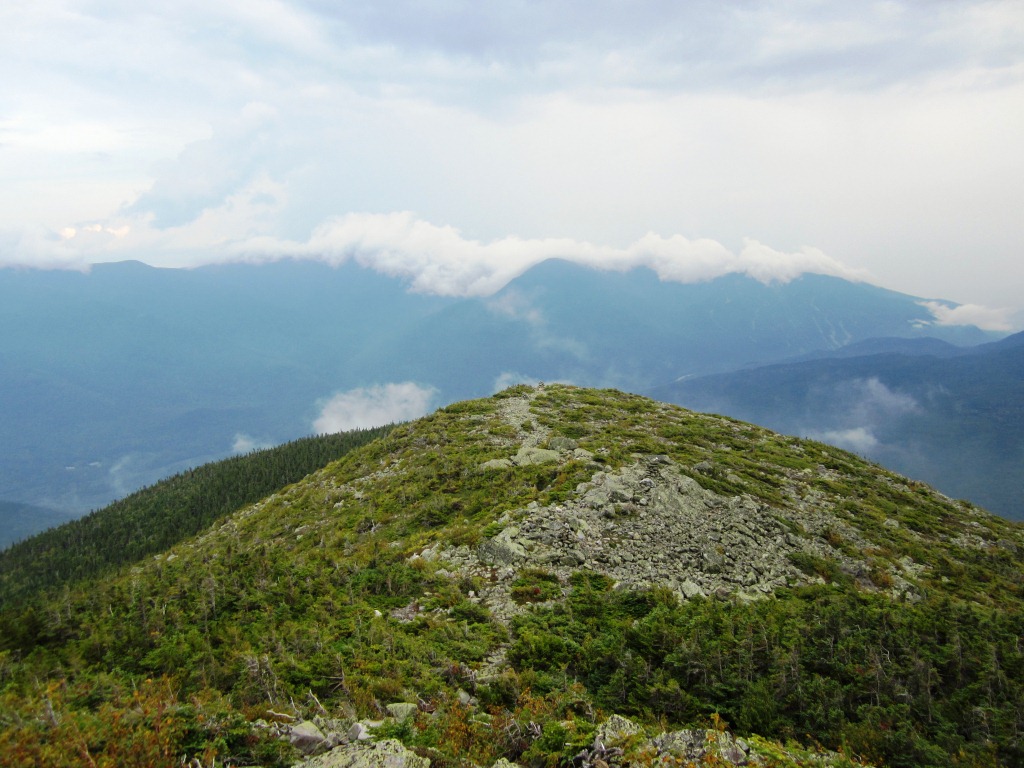 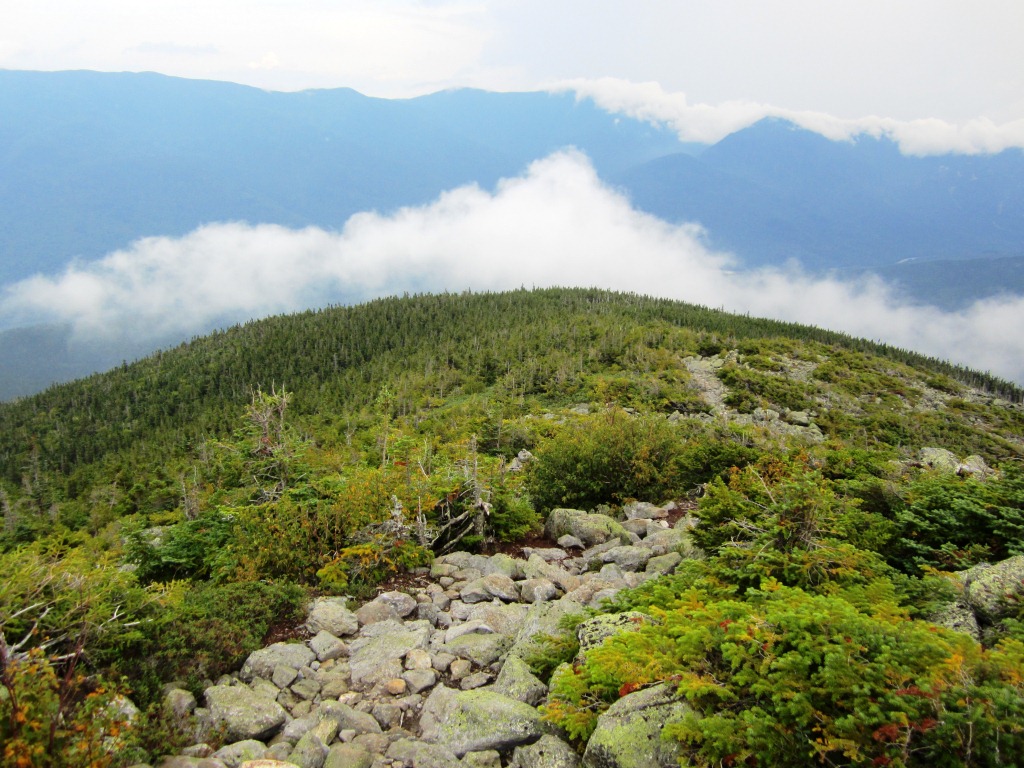 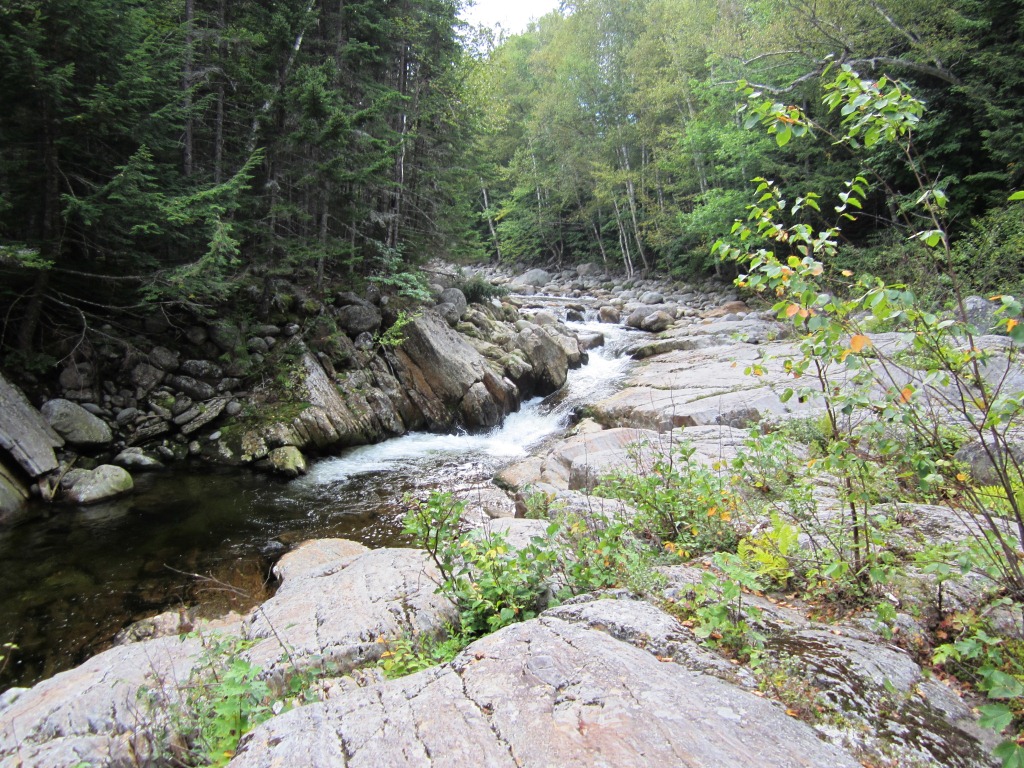 We got to the final bump at 4,100 feet (left) and as we dropped below treeline we knew from the guidebook that we were headed for 1,000 feet of misery - "relentless, very steep, rough" are some of the adjectives to describe that section of trail, and going down is always tougher than going up. But it helps to have low expectations and this turned out to be a piece of cake compared to the Daniel Webster Scout Trail. Again, since this is the AT there is a minimum standard of trailsmanship. At 3,100 feet the grade eases, and though we still had some distance to cover it was a walk in the park with a soft ground that sprung under our steps. We exited by the Great Gulf and Link Trails, following a wide stream (right) with many attractive swimming holes. It was a soothing end to a wonderful and tough hike!