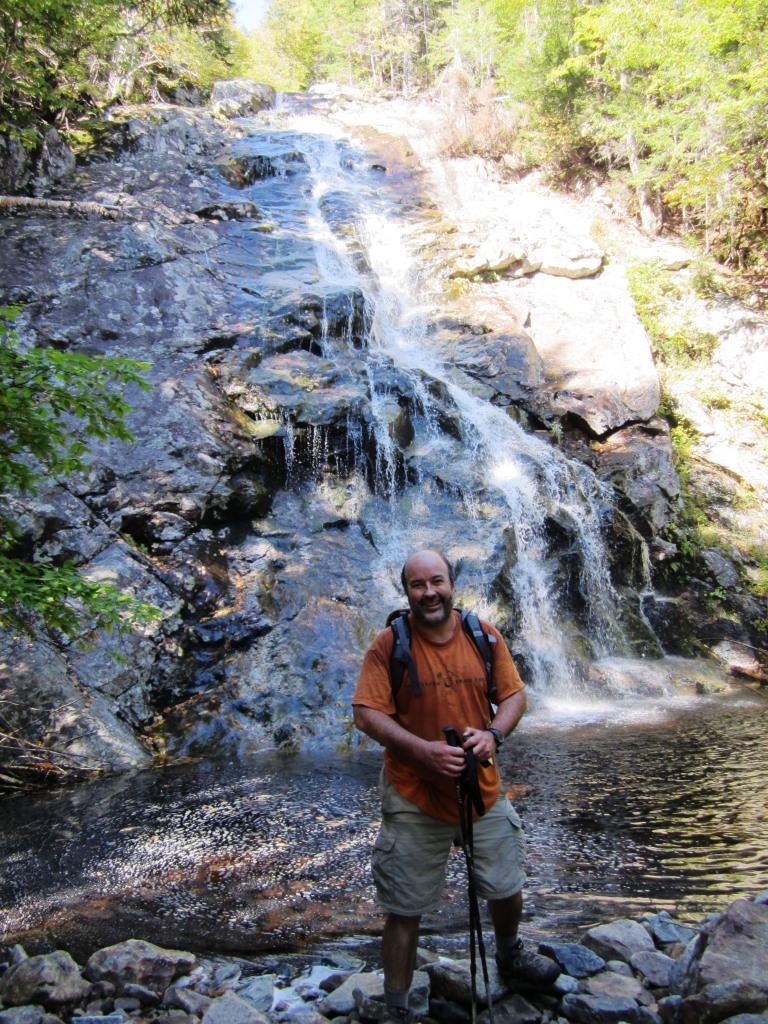 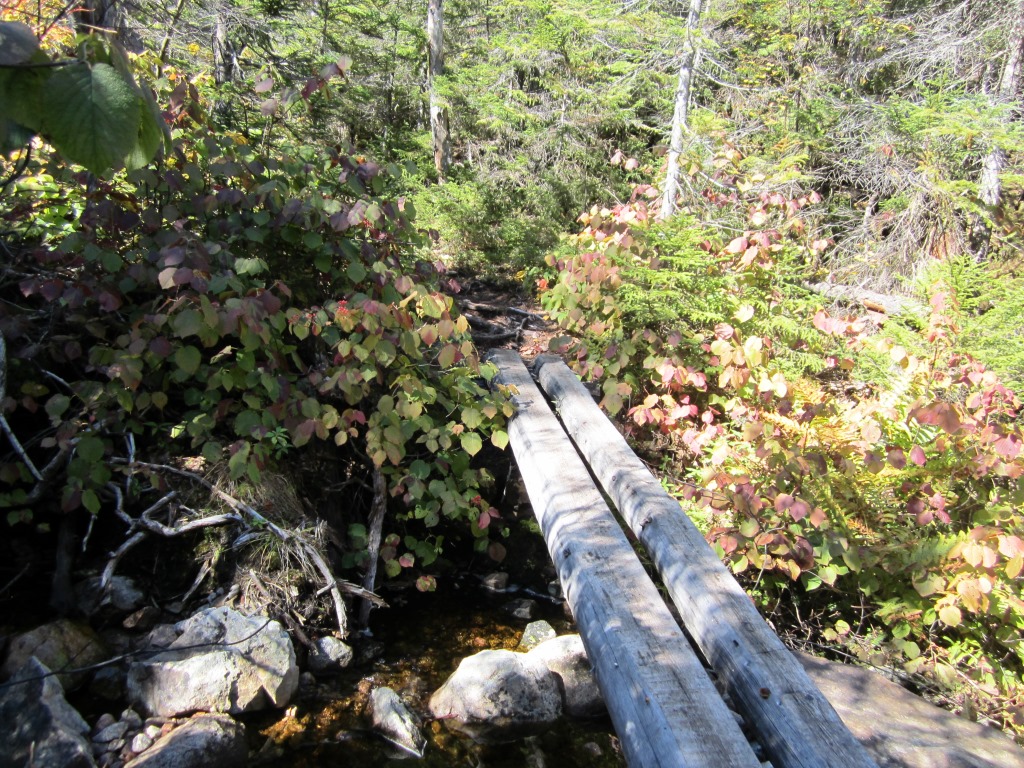 I was just back from seven weeks in Houston and needed some mountains. Roger Gagne and Peter Wyatt were fortunately there for me. Mt. Nancy is a hike we had wanted to do for a long time. At 3,926' it is the second-highest non-4,000 footer in New Hampshire. Like most of the non-4,000 footers it doesn't have a trail to the top. Peter and I had previously done Mt. Deception (3,671') in our Bretton Woods backyard. Mt Nancy has at least the merit of having views, and an interesting approach via Nancy and Norcross ponds that we had done back in 2009. Going up Nancy Pond Trail we passed by beautiful Nancy Falls (left) and as we got above in the virgin spruce forest I admired some fine trailsmanship (right) and enjoyed wonderful walking. 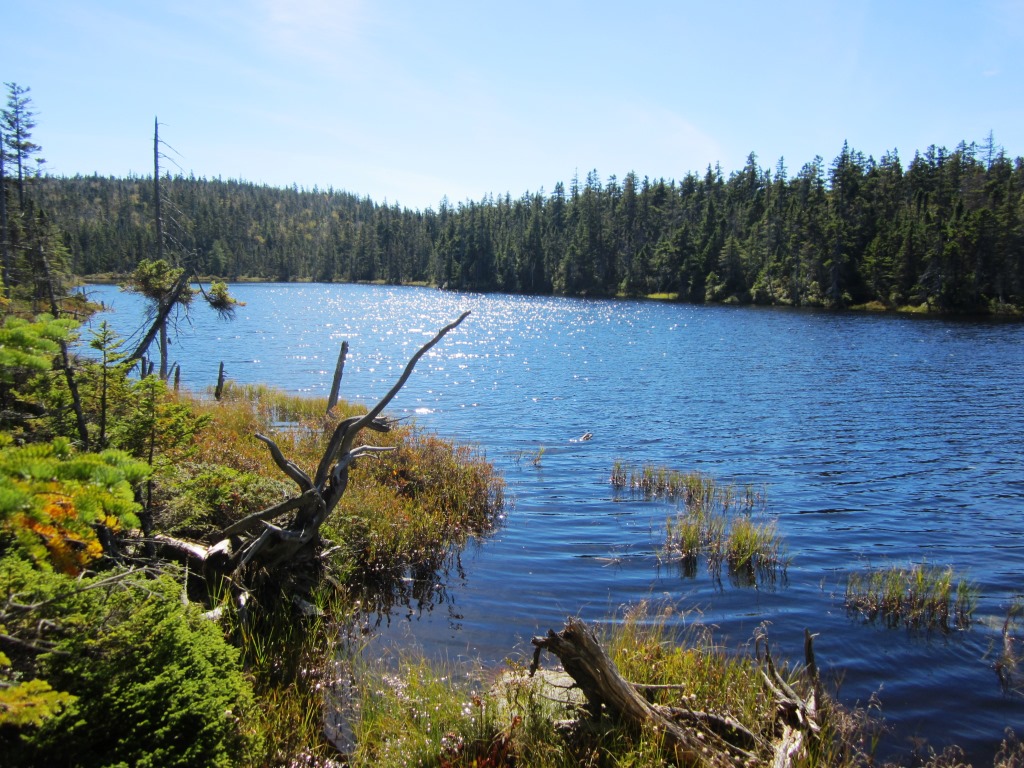 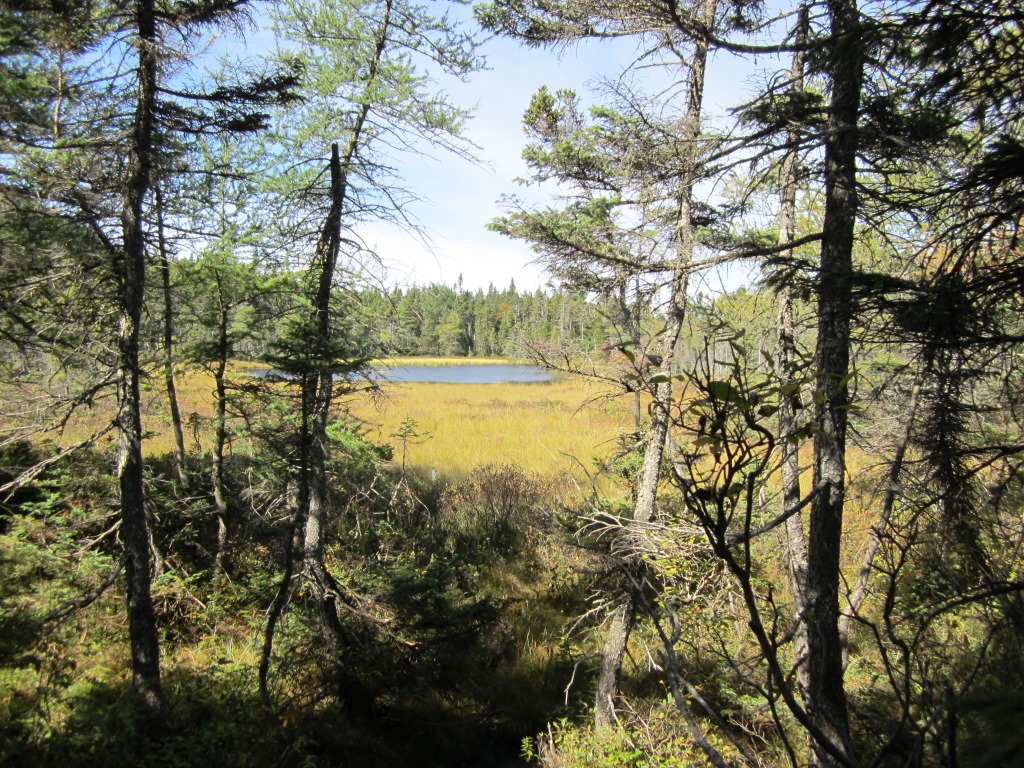 At the height-of-land we reached the succession of Nancy, Little Norcross, and Norcross ponds. Nancy Pond was more beautiful than I remembered it (left). Little Norcross was like before, distant and small (right). 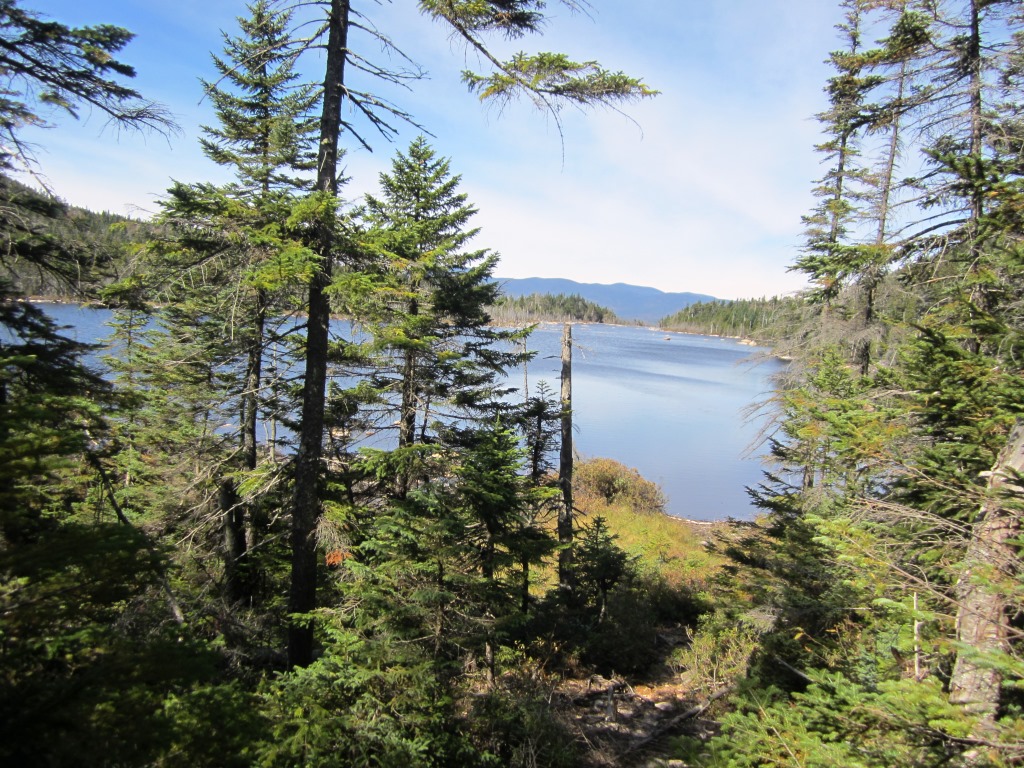 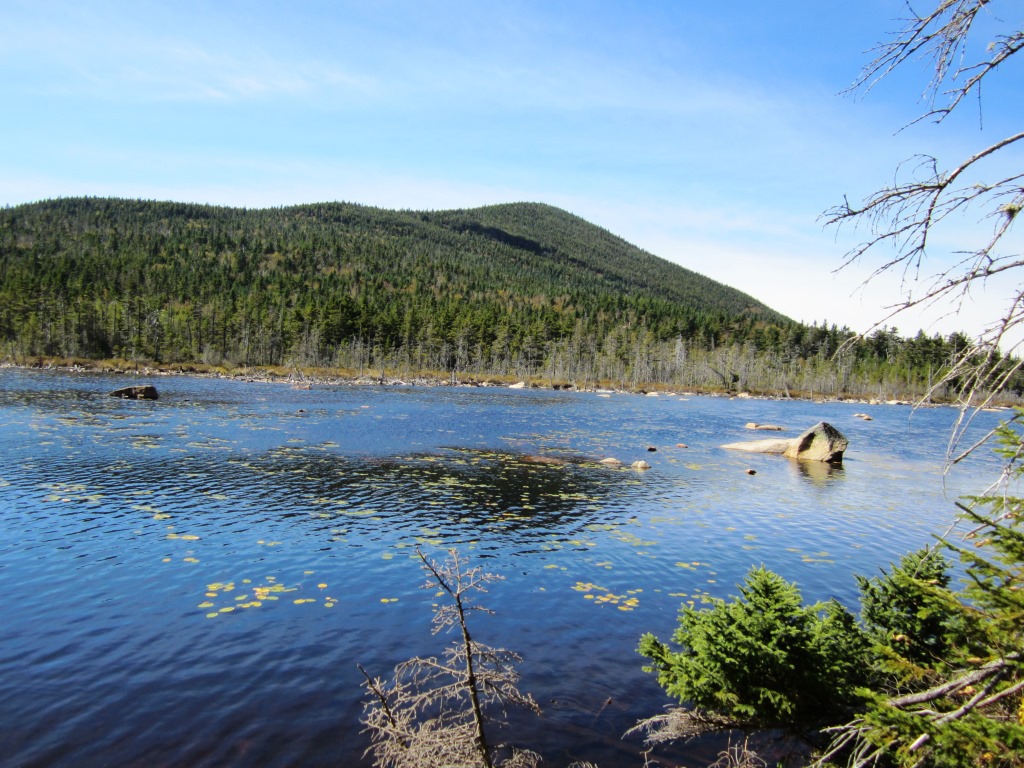 But the real gem is Norcross Pond (left, first view). Last time Peter and I were there in 2009 the trail was half in the pond. Since then the trail has been rerouted to higher ground. The water was relatively low, as one would expect in September, and there were a lot of rock islands in the pond (right, view to Mt. Anderson) that added to its attractiveness. 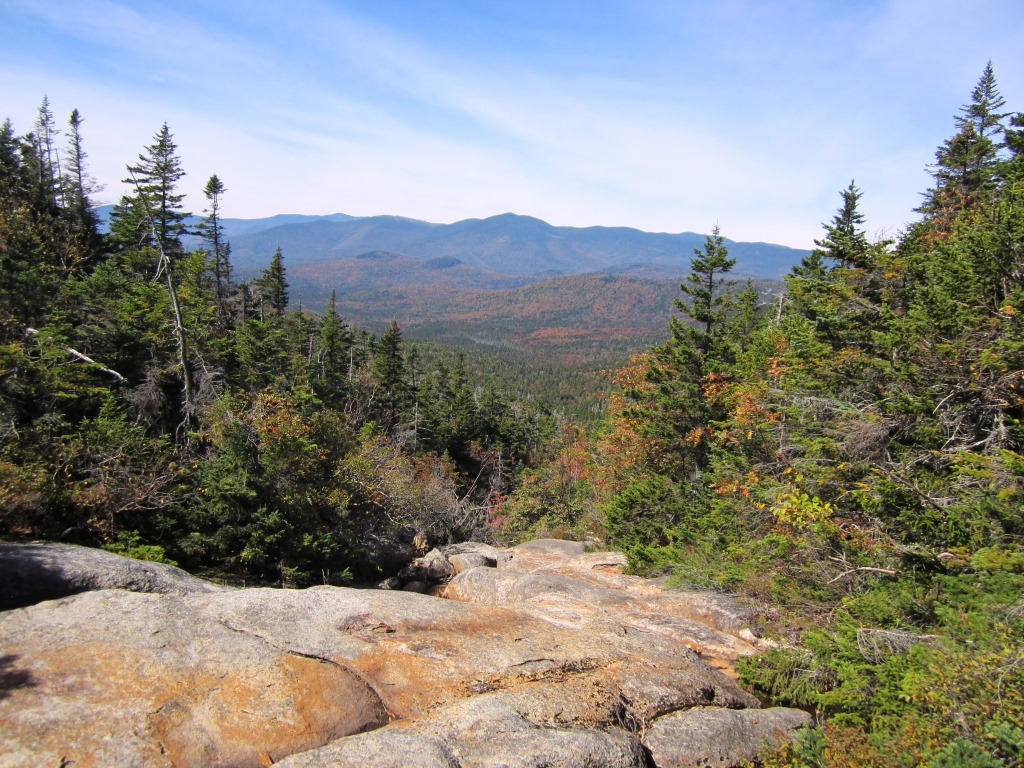 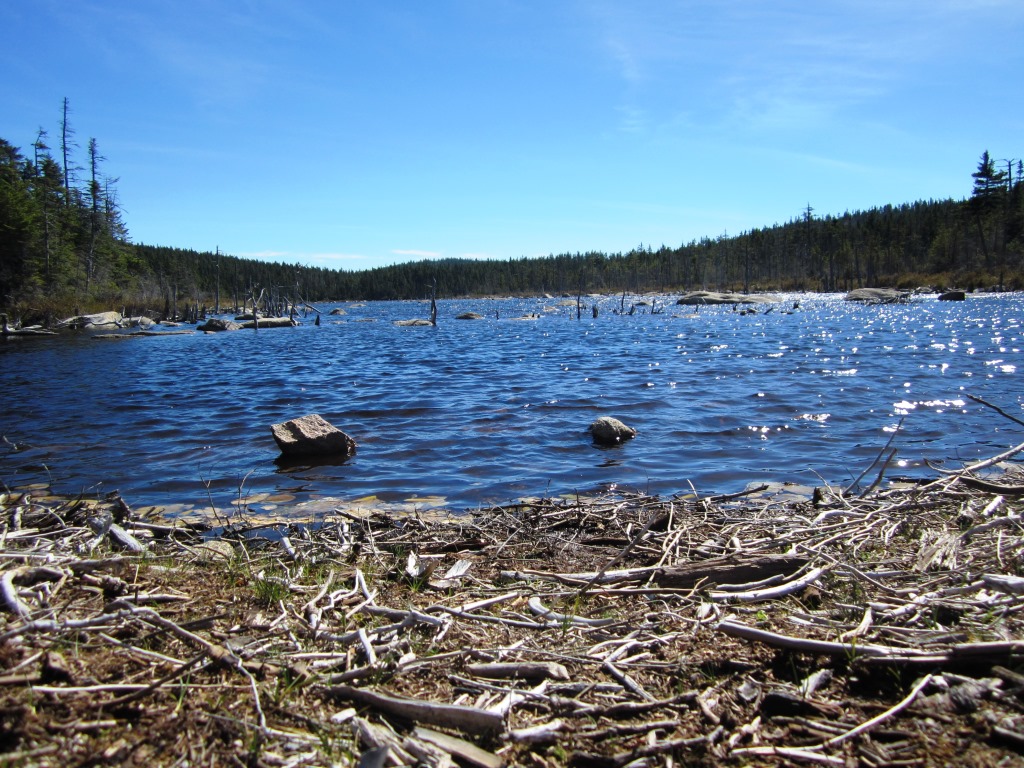 We got to the end of Norcross Pond and admired the view looking south to the Bonds (left) but also the wonderful beaver work that maintains such a nice pond at the height-of-land (right). Thanks guys! 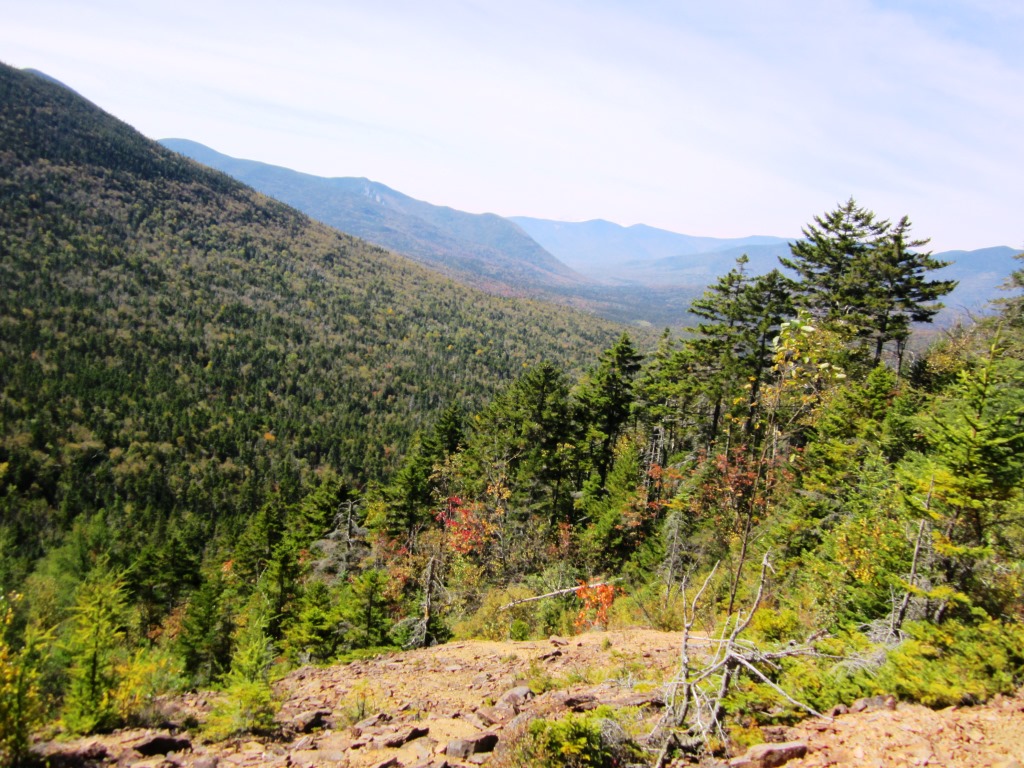 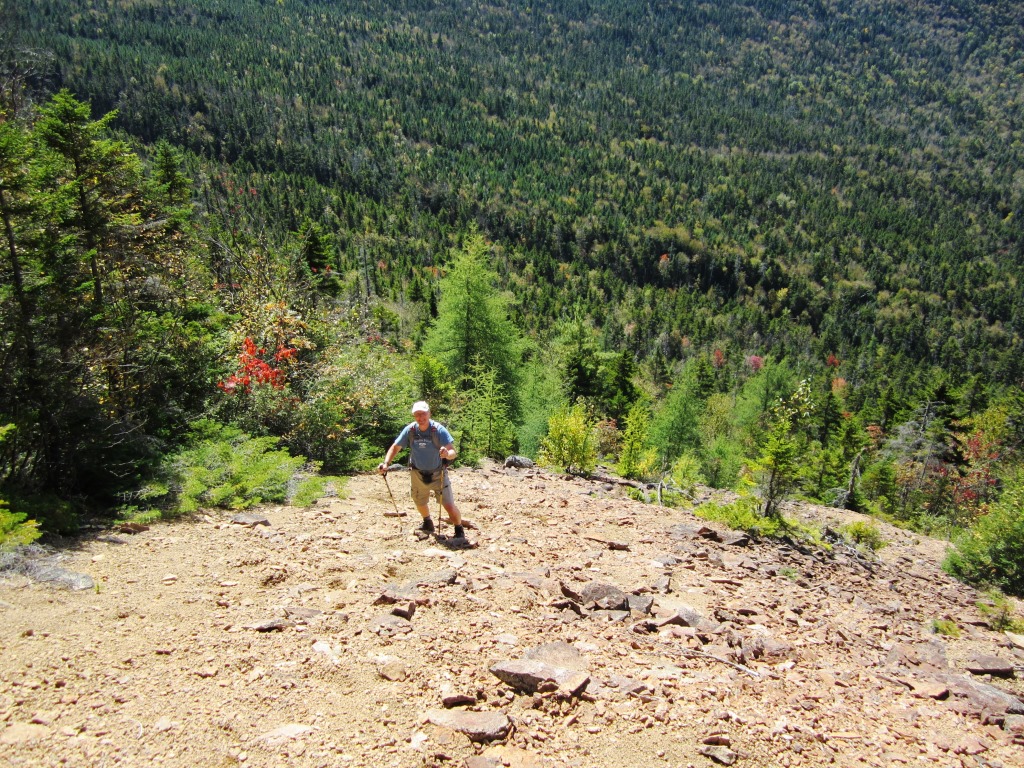 From there we headed up to Mt. Nancy. This is no official trail but a "herd path". It begins as a very wide trail (no doubt a former woods road) that goes off at right angle to the Nancy Pond Trail at the end of Norcross Pond, right next to a No Camping sign and with a big pile of brush across it to tell you that it's not an official trail. Soon after you reach a junction and you should go left (right goes to a campsite). Soon after there's a great slide just off the trail with views of Carrigain and the Hancocks (left and right). You can see the fall colors just starting. 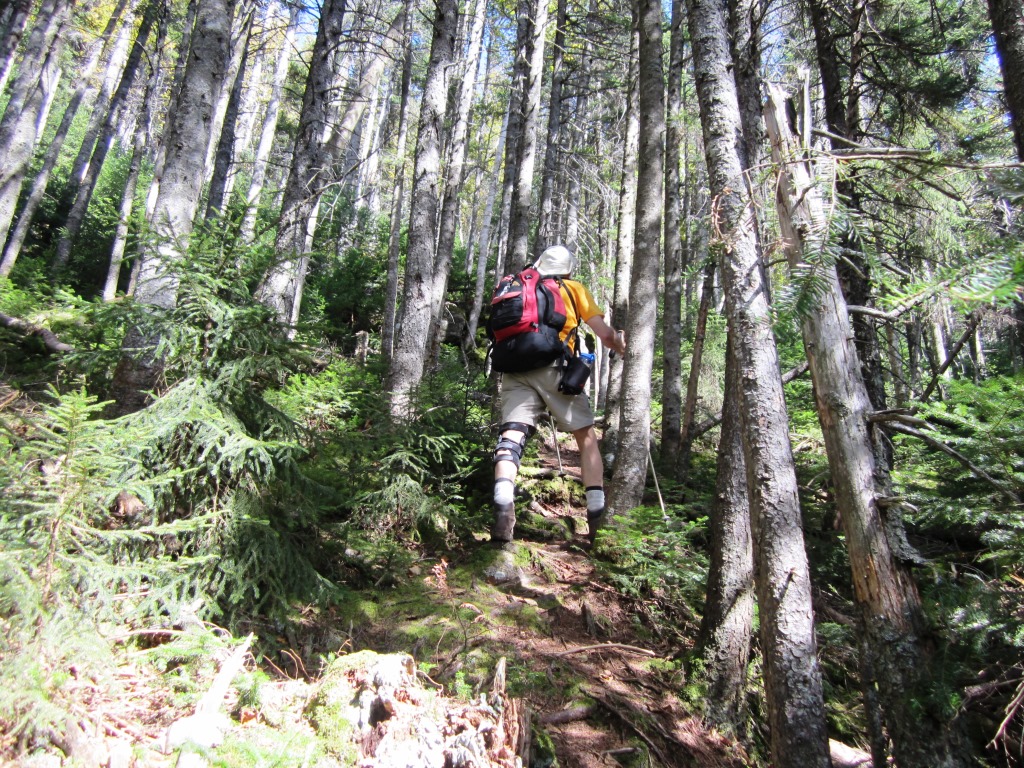 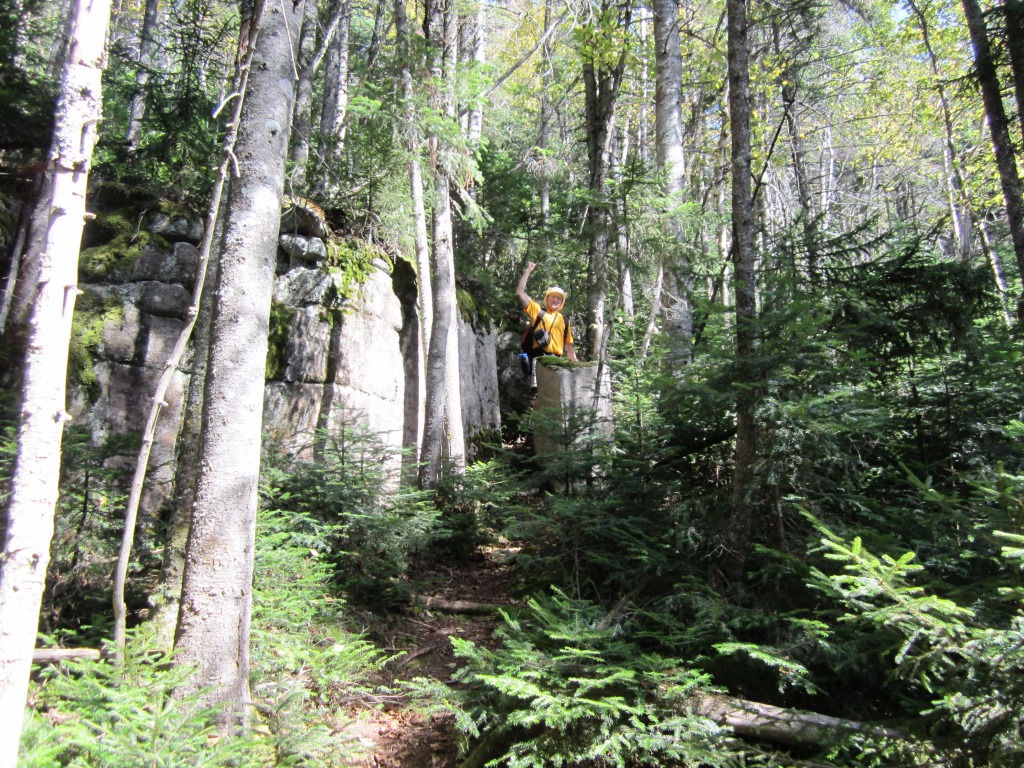 The trail up Mt. Nancy may be unofficial but has a clear tread all the way up. It is not particularly rough and does not require use of hands but it is very steep - no nonsense, straight up. In these kinds of situations I always find myself huffing behind "mountain goat" Peter (left), who dispenses wise opinions on the political issues of the day and found a pulpit along the trail (right). 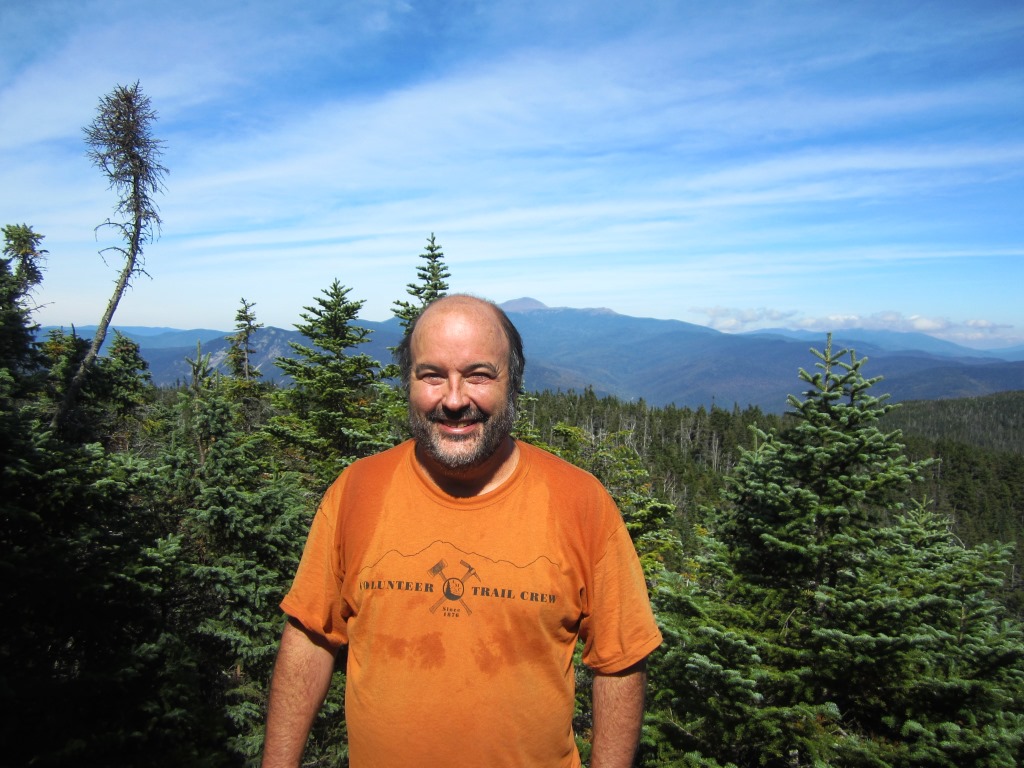 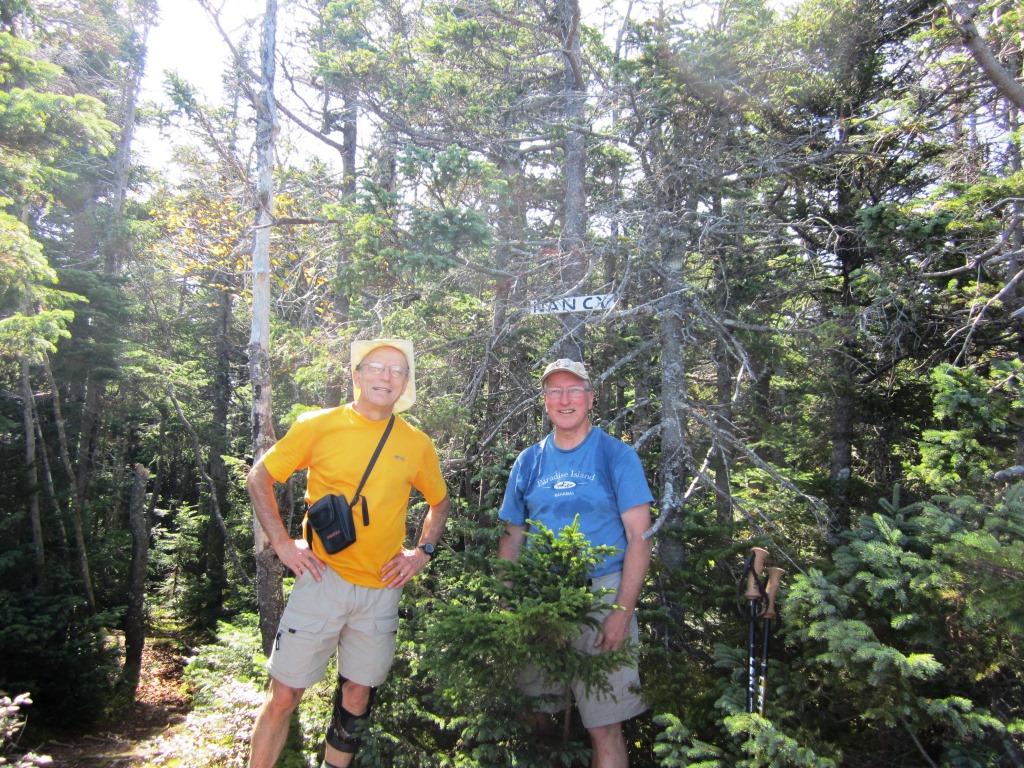 As we got close to the summit the trail leveled off and became just a wonderful path through the woods taking us to the top of Mt. Nancy. At the top is a sign (right) and a view towards Mt. Washington (left). We were very pleased to be there, not so much for the view (which was OK) but because it was a beautiful mountaintop - we could wander around the top, lie down on the moss, look for other views (no luck there), and more generally be where we weren't supposed to be. 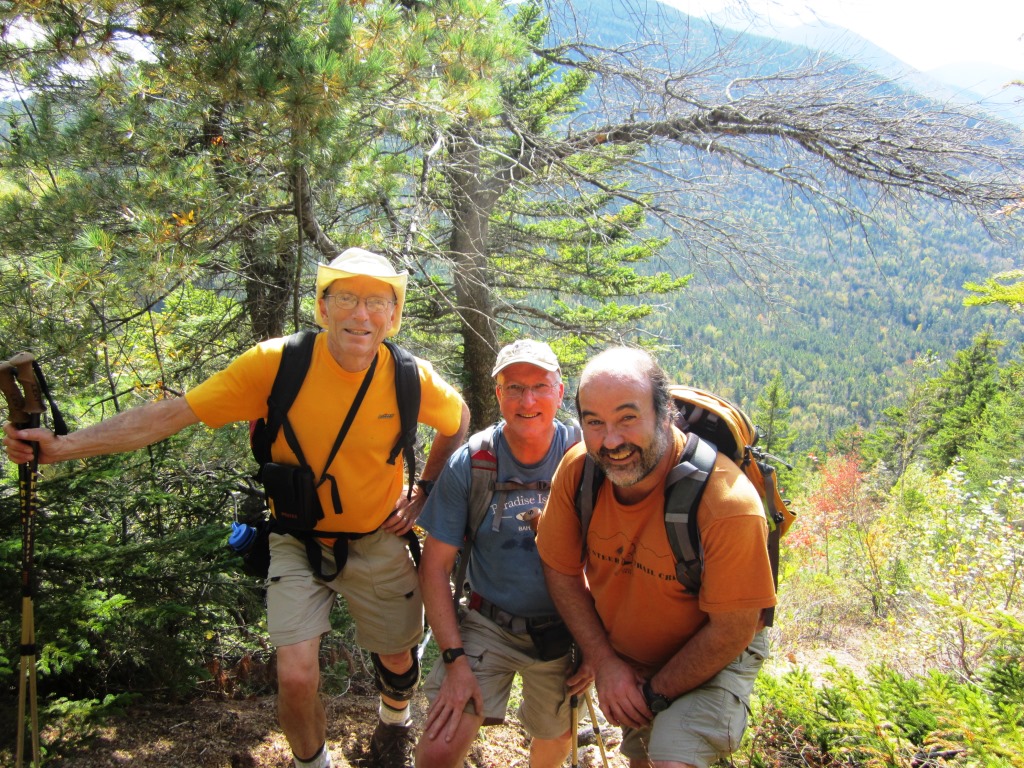 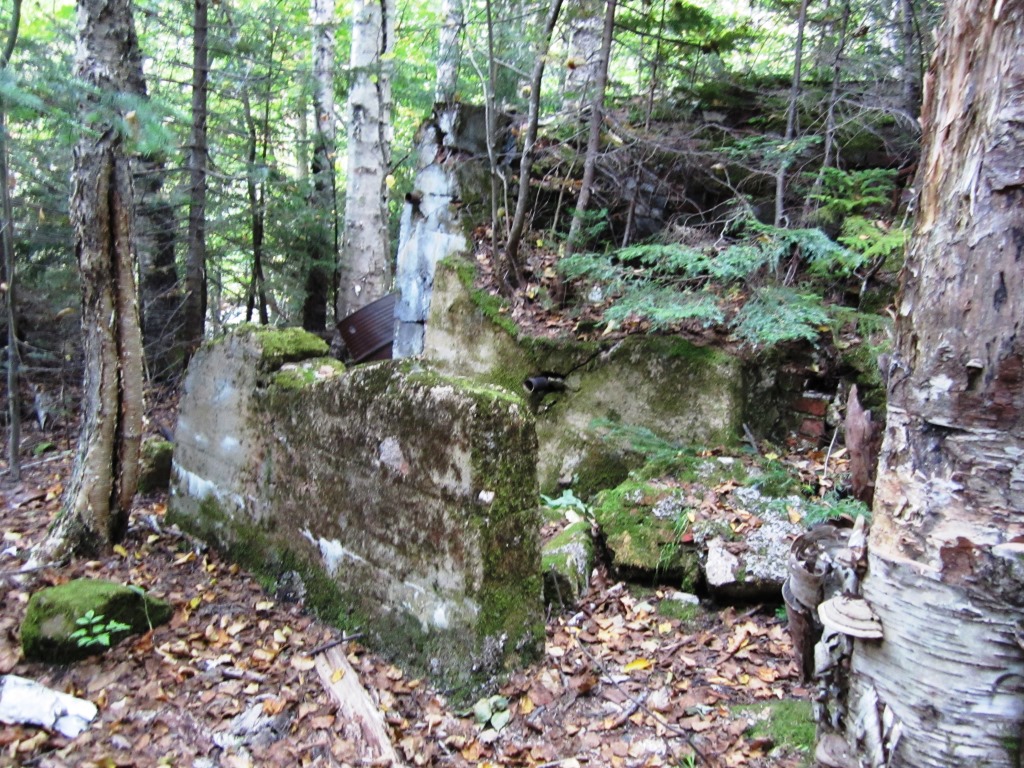 After we had enough of that and checked that our cellphone connections weren't working, we headed back down, which was almost as steep and tough as going up. At the slide we crossed two guys (third group we saw all day) and they took our obligatory picture (left). We continued back down the way we came. On the way out below the Falls we saw the old mill by the trail (right), which we had somehow missed on the way up. Then I found some mushrooms and ate them the next day - heavenly.