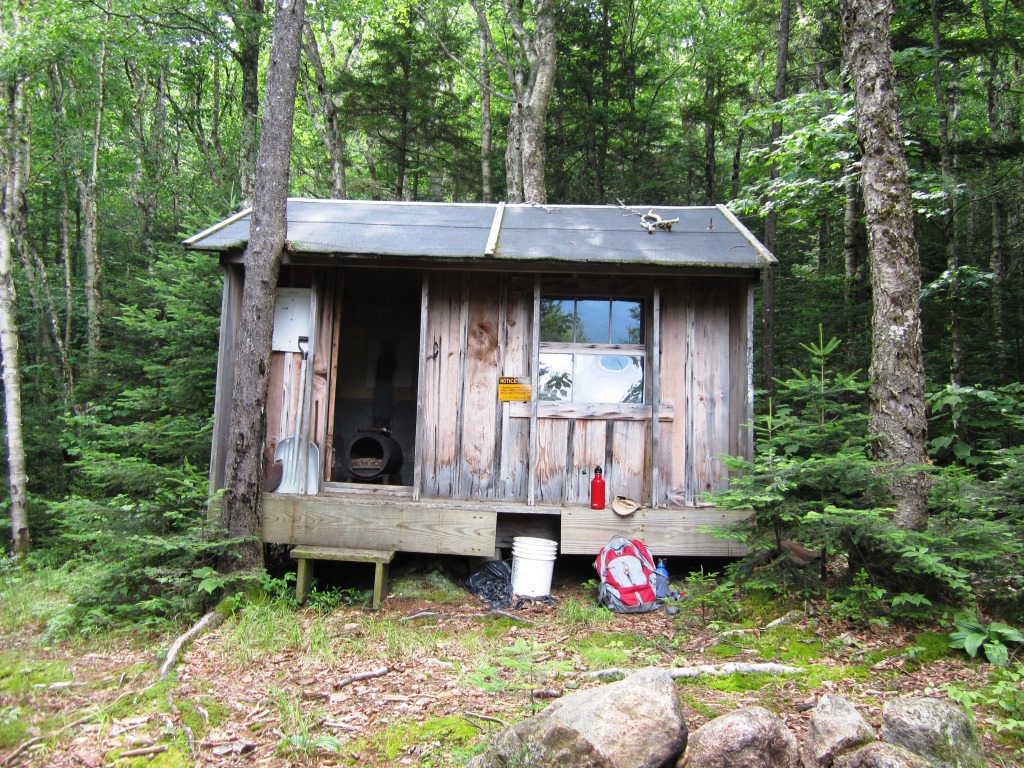 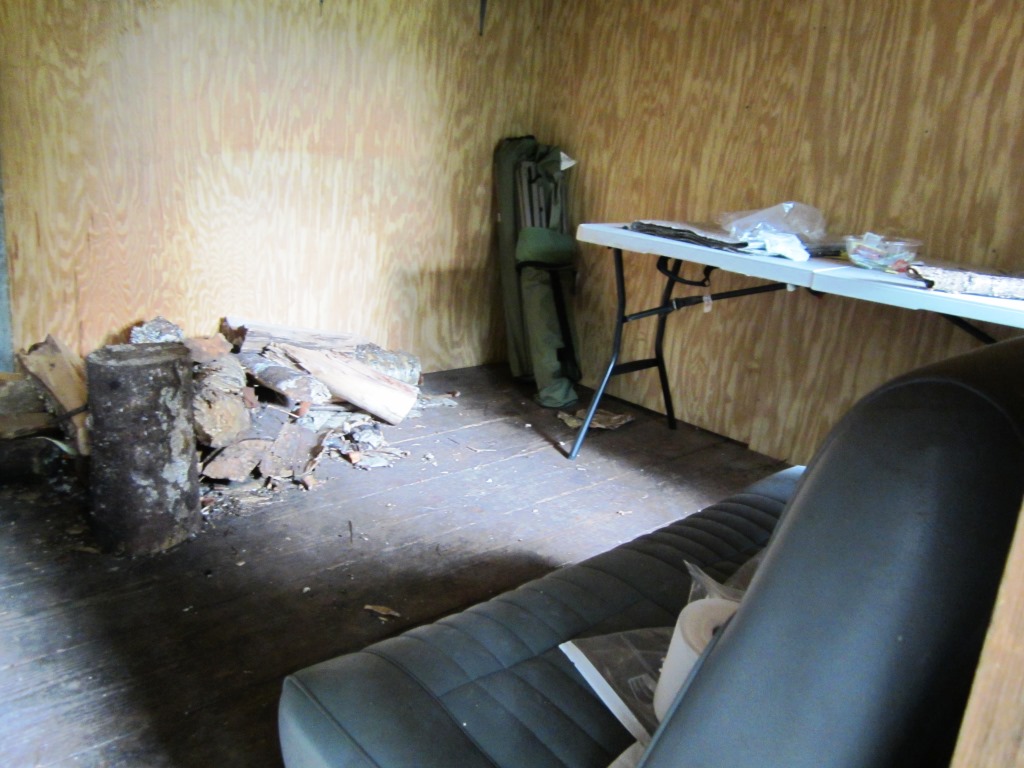 Lots of rain and thunderstorms in the White Mountains these past few weeks. On a wet day last week Roger Gagne and I climbed the Ammonoosuc Springs Trail of the Bretton Woods cross-country skiing network to check out the "rustic overnight cabin" advertised by the ski map on top of Mt. Echo. It took us longer than we thought (3.5 h roundtrip) and the cabin was disappointing - a tiny shack with an oversized woodstove and some plastic furniture (left and right). An overnight stay would mean getting cozy if you're not alone. We got back wet and muddy but at least we saw a moose on the trail. 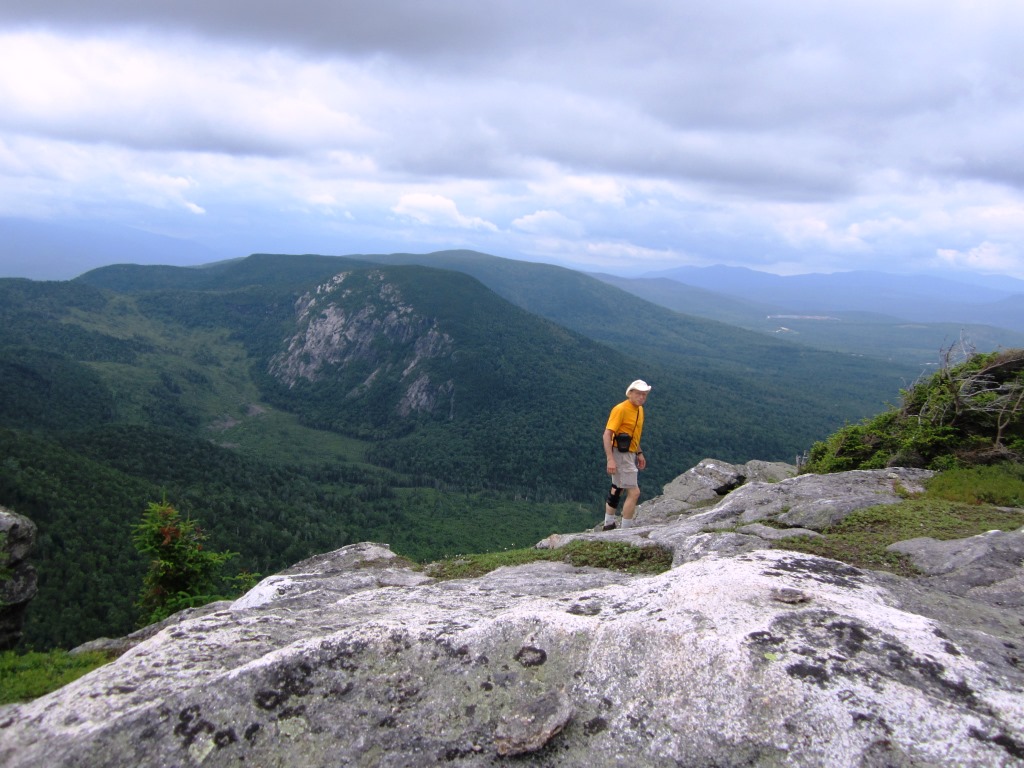 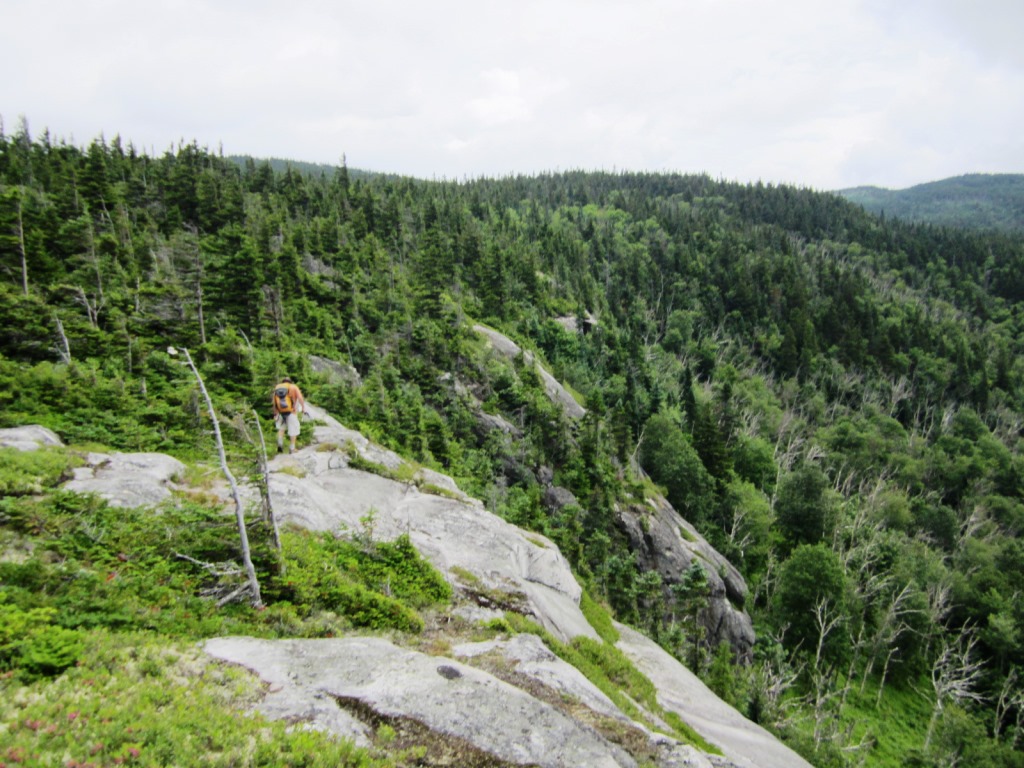 On July 4th weekend Peter Wyatt joined us for a hike up Mt. Success (3,550 feet) in the Mahoosucs. This was the scene of a 1954 plane crash and I had read a recent Boston Globe article about visiting the wreckage. The trail started at 1,700 feet from Success Pond Road, a logging road out of Berlin. There were just two other cars in the clearing that served as parking lot - we were definitely avoiding the crowds on a busy week-end. Despite little use the trail was in very good condition, and at 2,900 feet took us on a loop over cliffs with spectacular views to the west over Berlin and the North Country, to the south toward the Mahoosucs ridge (left), and to the east toward Mt. Success (right). It was warm and humid and the haze limited the visual range, but the strong wind on the cliff gave us nice relief. 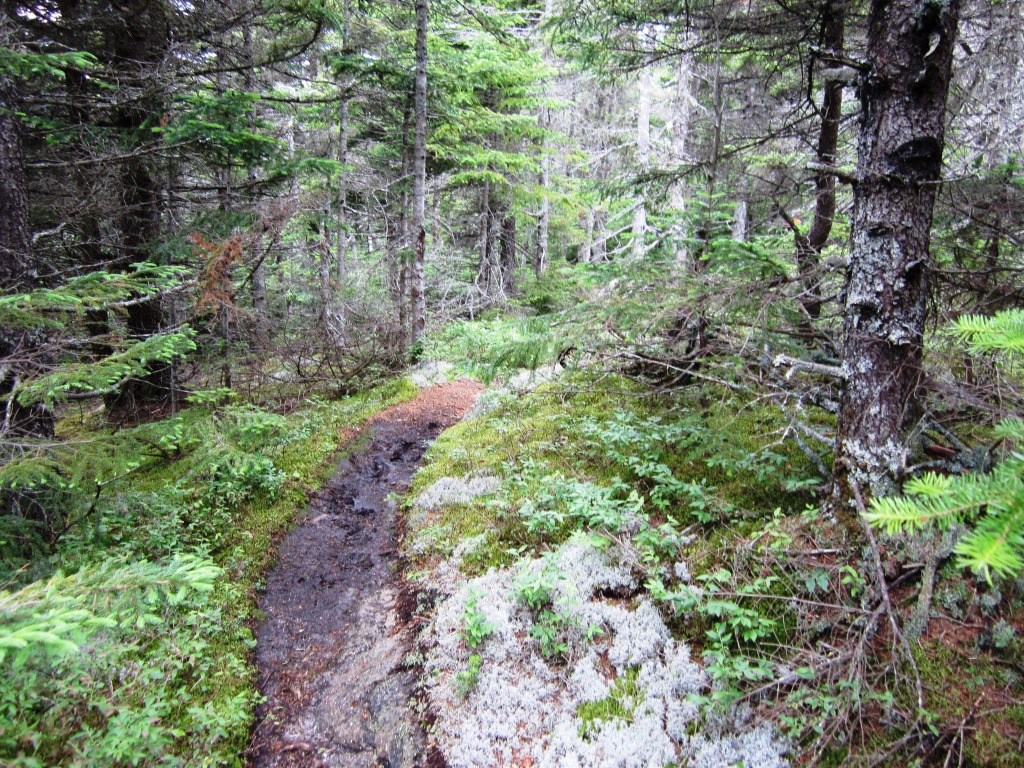 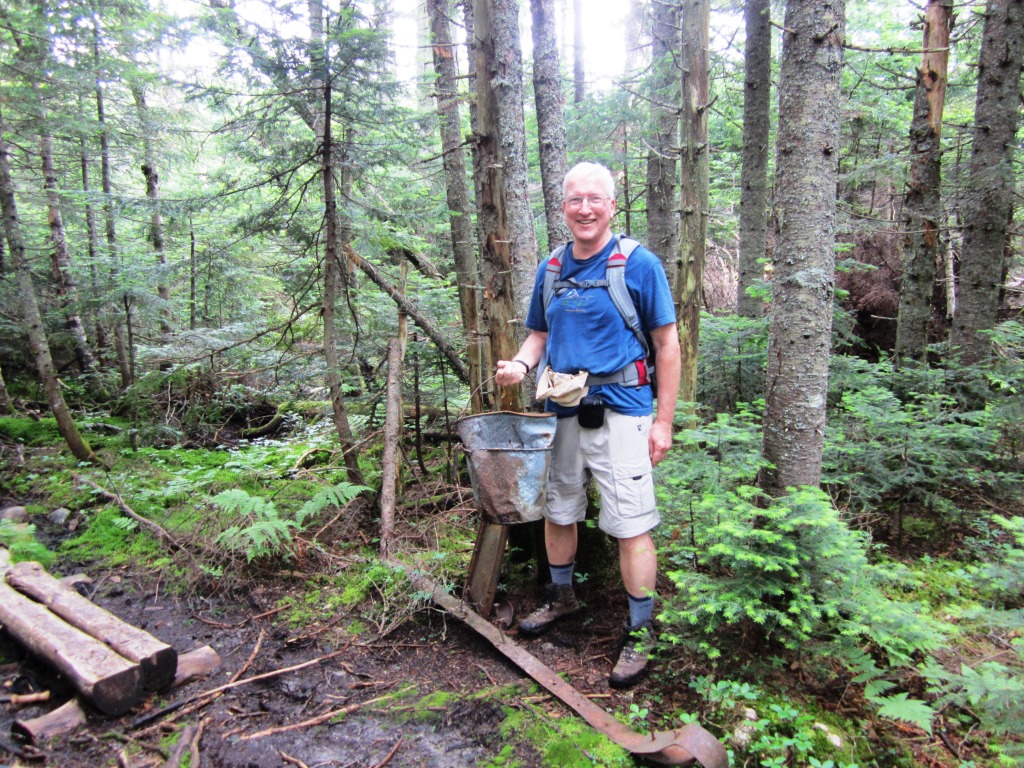 From there we continued up the trail to its junction with the Mahoosuc trail. The trail had a very northern feel, with much of it on bedrock because of the thin soil, and lichens and mosses dripping moisture (left). We passed by the remains of an old logging camp (right) and crossed a number of wet areas with excellent natural bog bridges (below left) that reminded me of my son Alex's trail crew work in the area a few years ago. 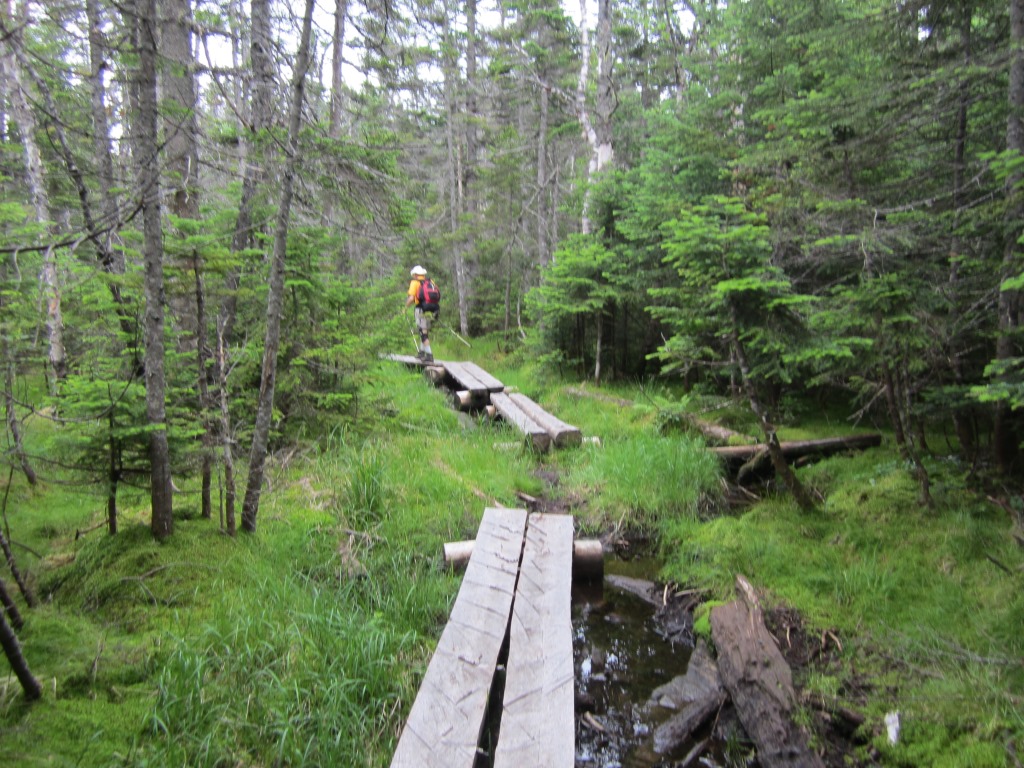 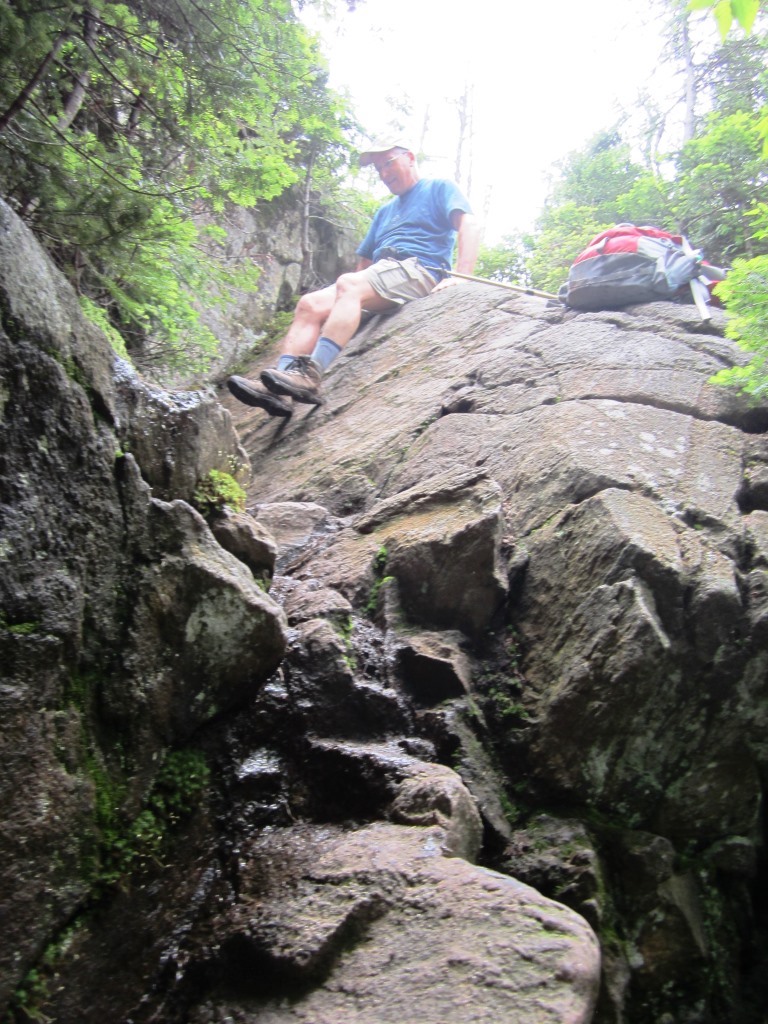 In this manner we reached the Mahoosuc ridge and turned south on the Mahoosuc Trail, which follows the ridge from Gorham to Maine and is part of the Appalachian Trail. It is known as the roughest part of the AT and indeed the ridge is narrow and rocky and some parts required scrambling (right). No big deal for us, but challenging for sure with a thru-hiker's backpack. 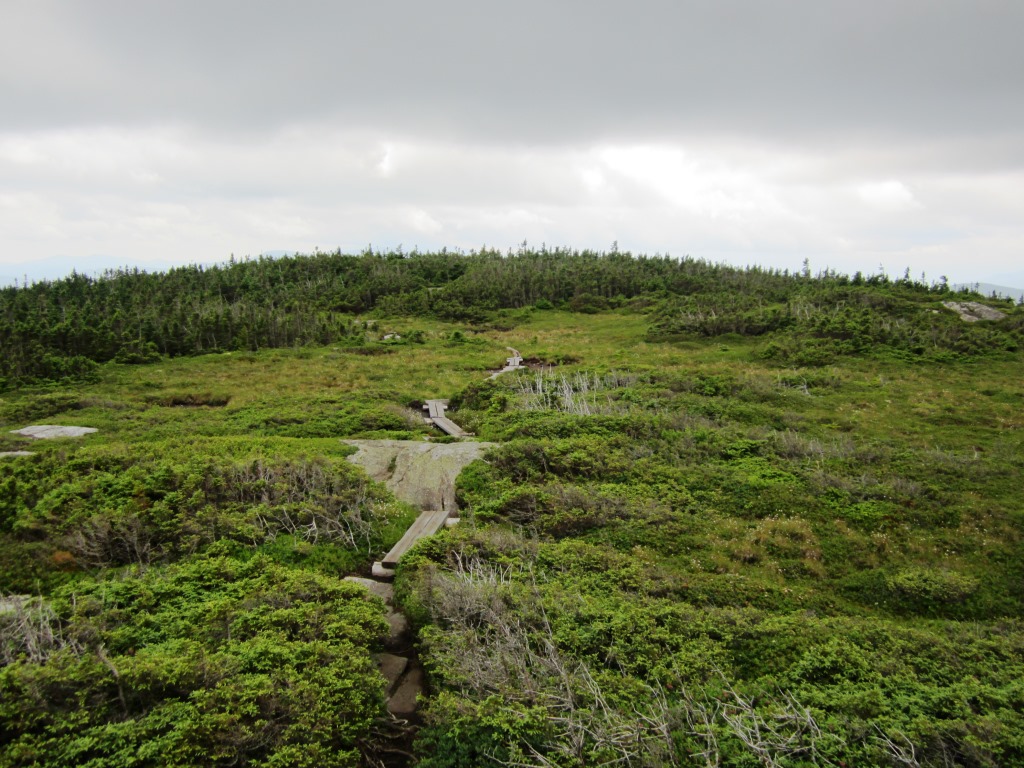 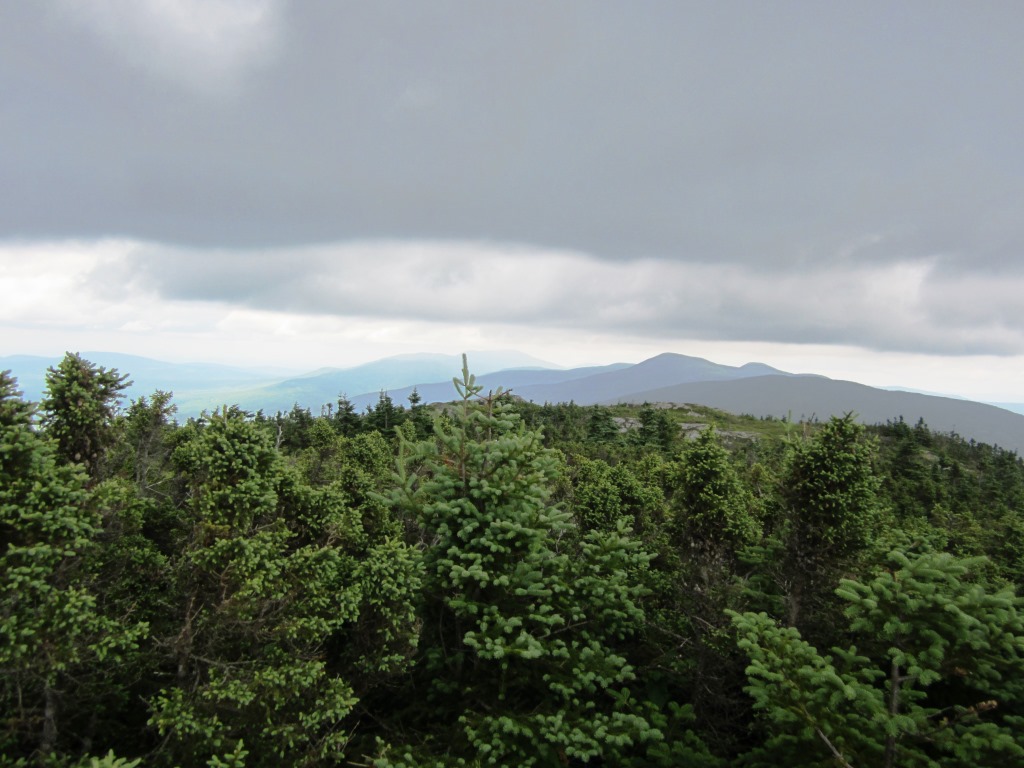 Eventually we got to Mt. Success, on a boggy plateau (left) with 360-degree views through the haze. At right is the view south along the Mahoosuc Ridge toward the Presidentials, which were socked in cloud. There were a few people at the top and we got our picture taken (below left). Interestingly, all the people we met on this hike knew about the plane wreckage even though it is NOT in the AMC guidebook (for reasons I don't know). Some were doing the same hike we did, while others were doing a multi-day backpack along the Mahoosuc ridge between Grafton Notch and Gorham. It is possible to do the whole ridge in a series of loop day hikes with access from logging roads - now definitely on our to-do list. I had already done one of those with Alex from Dream Lake to Gentian Pond. 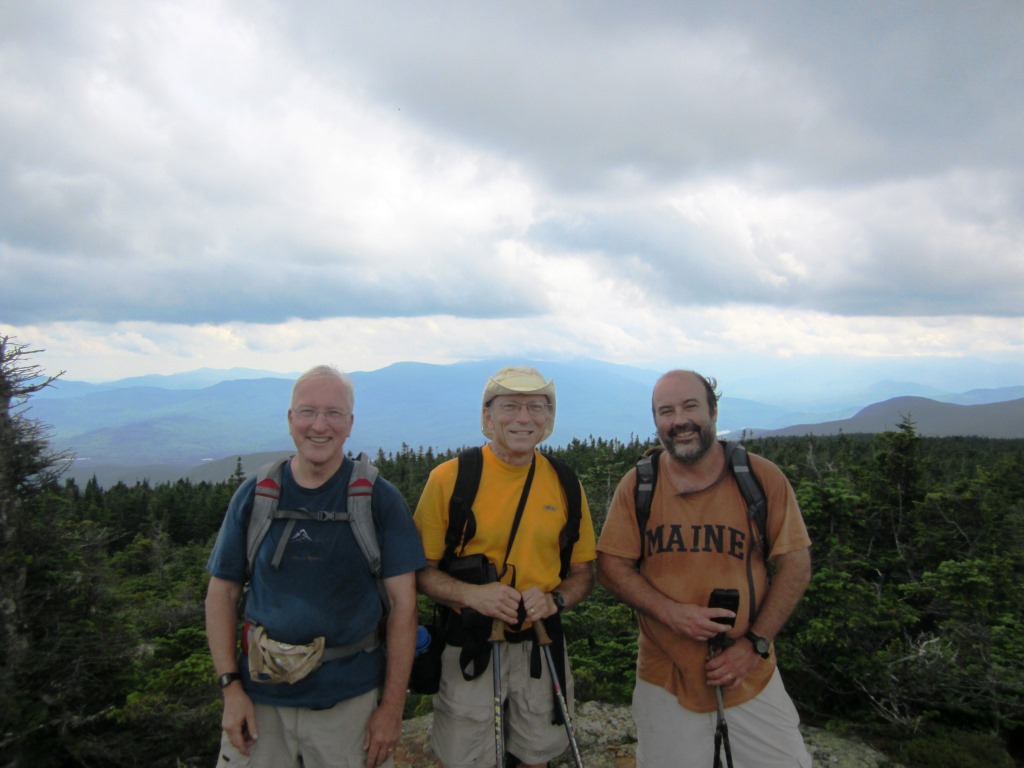 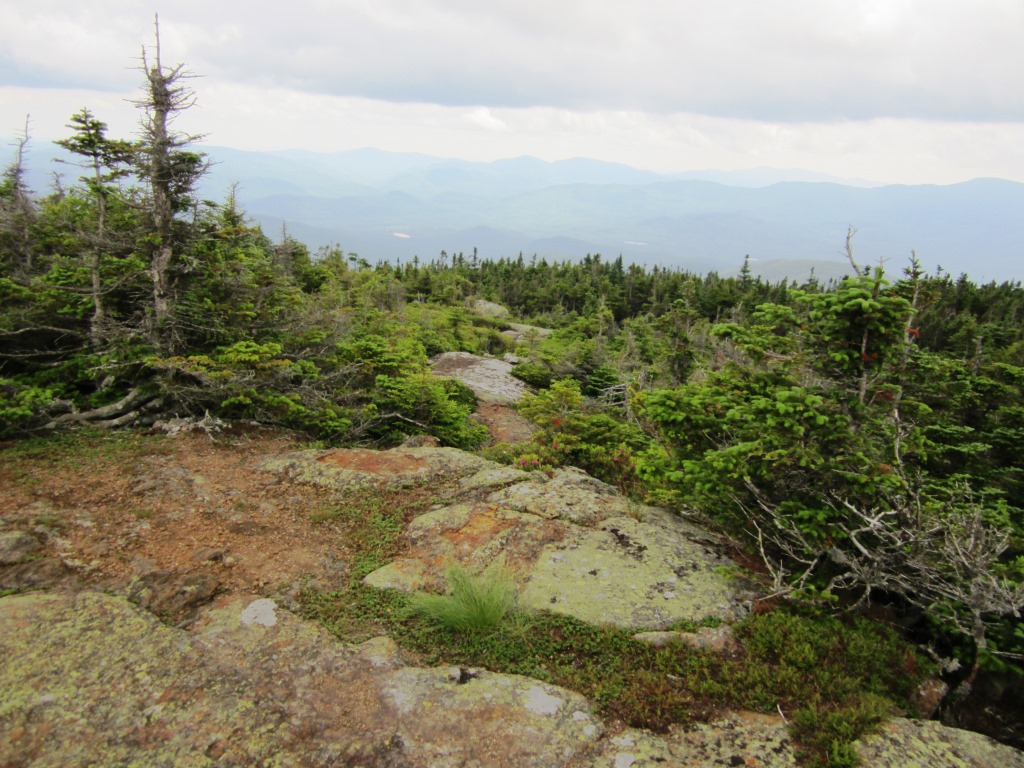 But we were not at the plane wreck yet. From Mt. Success we continued south on the Mahoosuc Trail, dropping back into the woods briefly and then back up another open rocky summit which was even more spectacular than the first one. Just before dropping into the woods after the second summit we spotted a big boulder to our left with a few pink flags and a herd path (right). This is the way to the wreck but it's easy to miss. We met a nice lady at the intersection who was also hesitating about the way to go, and she joined us in the bushwhack to the wreck. 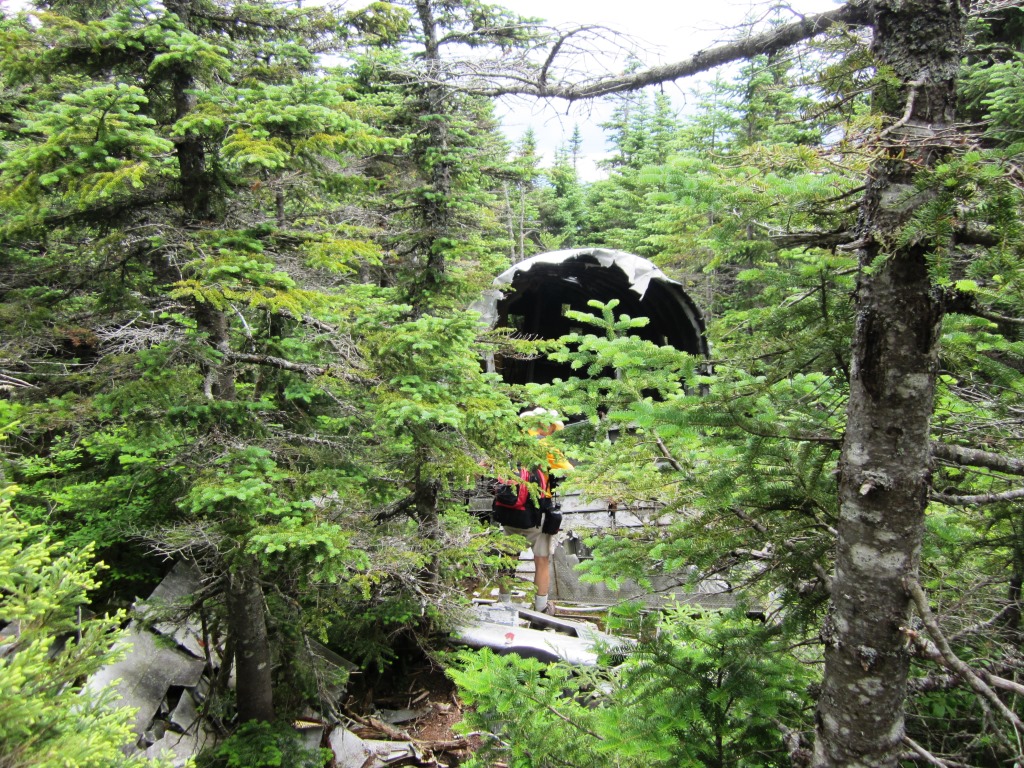 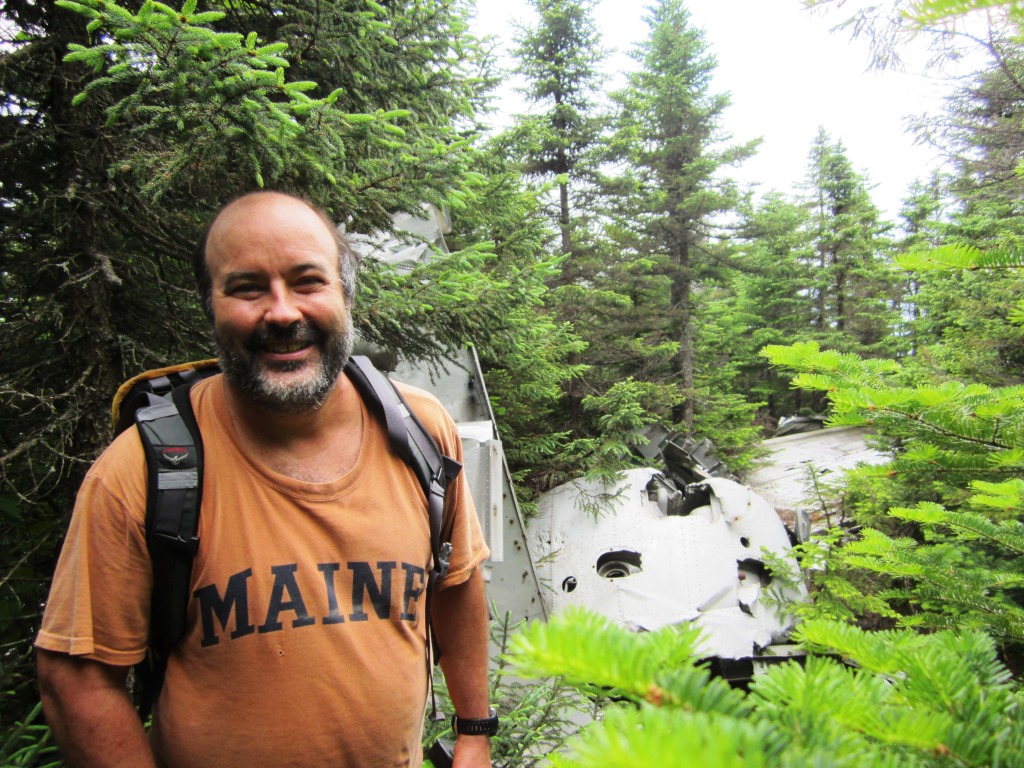 We turned left towards the boulder and from there dropped straight into the woods. Soon we found the yellow blazes that mark the boundary of the AT corridor and headed right (south) on a semblance of trail following these yellow blazes. After a few hundred feet of bushwhack along the yellow blazes we found the wreck (left and right) and it was amazing. It was a DC-3 that hit the mountain in a snow squall in November 1954. The co-pilot and navigator died, the pilot was severely injured but survived, the passengers and stewardess were OK (!) but it took three days for rescuers to reach the site. Check out the Globe story to know more. 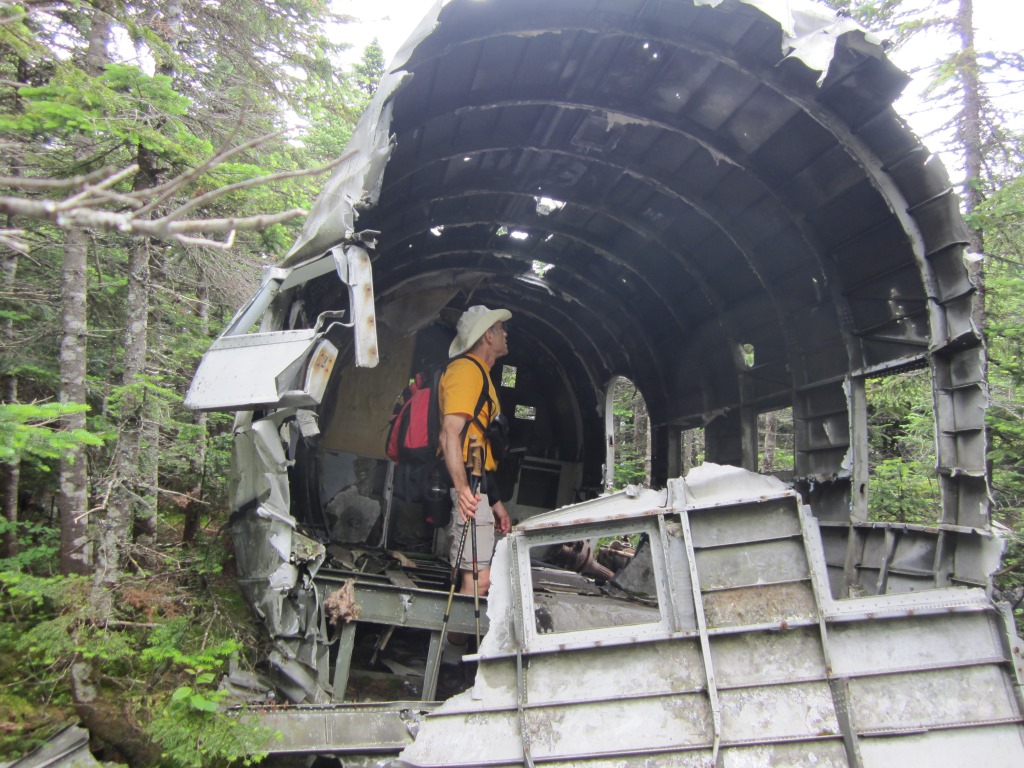 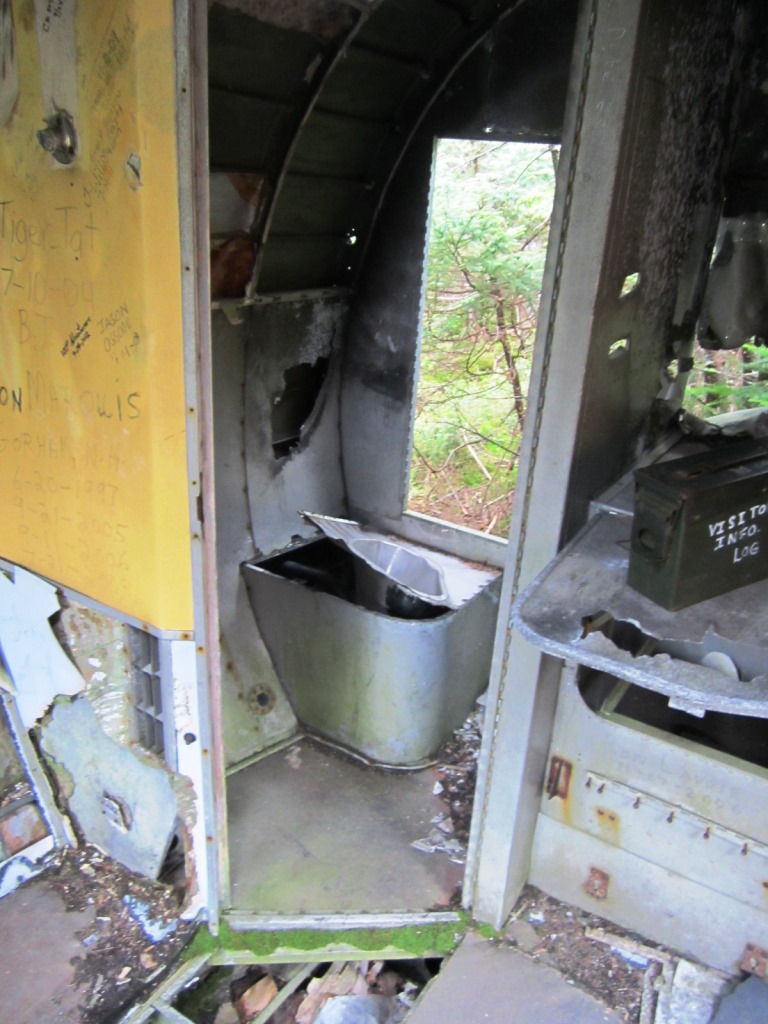 The wreck was remarkably conserved - fuselage is aluminum so it does not rust. We could walk through the cabin (left) and visit the head (right). The fuselage was broken in several parts, and the wings were nearby. We speculated that a number of small pieces had been carried off as souvenirs over the past sixty years, but you still had the impression that this crash could have happened just a few years ago. Some moss was starting to grow on a few pieces and eventually the forest will take over, but it may take centuries considering how little has happened in the past sixty years. 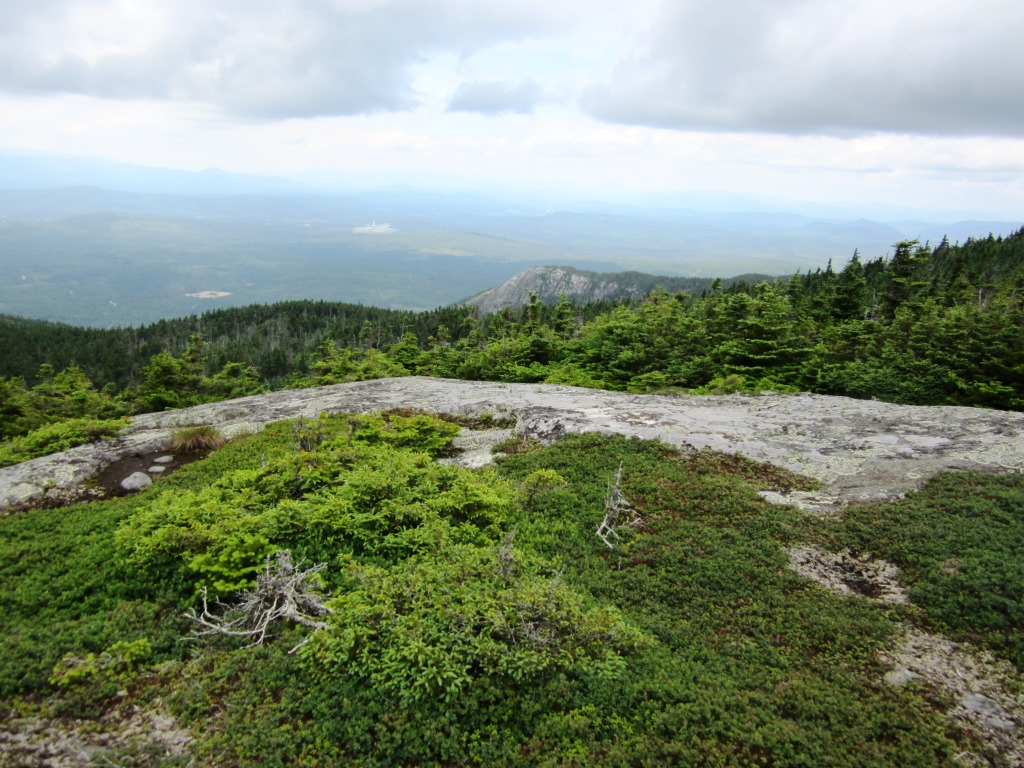 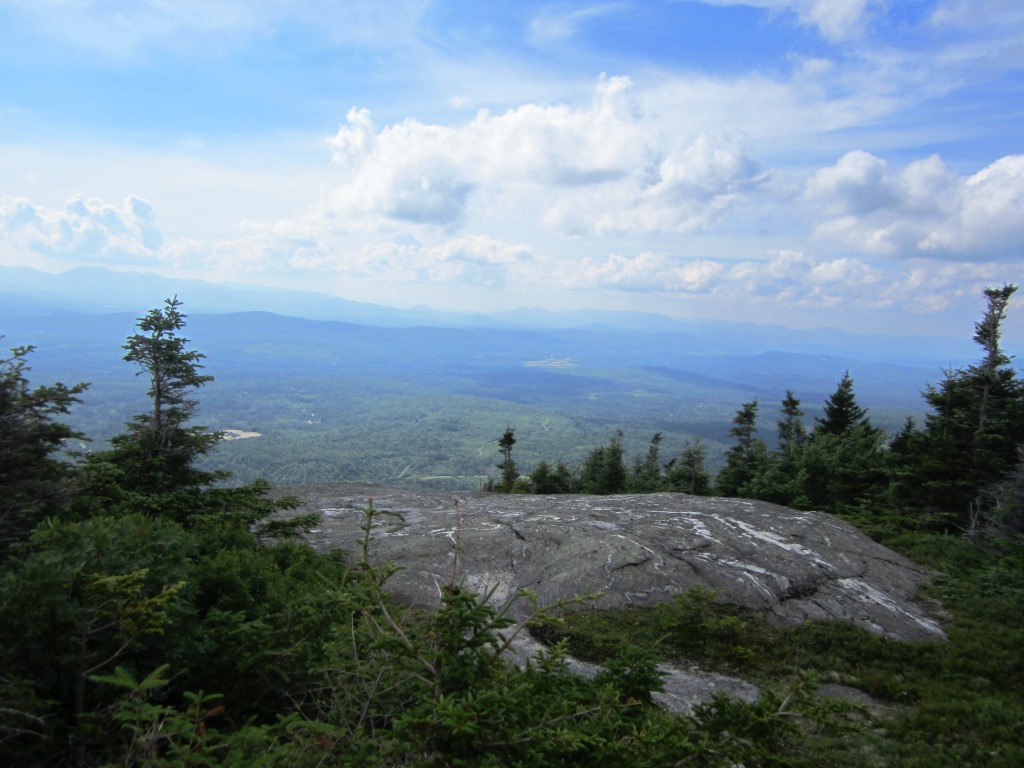 We got briefly lost coming back from the wreck - following the yellow blazes was no problem, but you have to remember at what point exactly you dropped down from the summit and we were not as careful in noting that as we should have been. We eventually found the path back up and returned the way we came, over the Mt. Success plateau (left) and back on the Loop trail for the views and breeze (right). Now that we have found our way to the distant Mahoosucs were are planning a series of day hikes to explore its trails and summits - stay tuned!