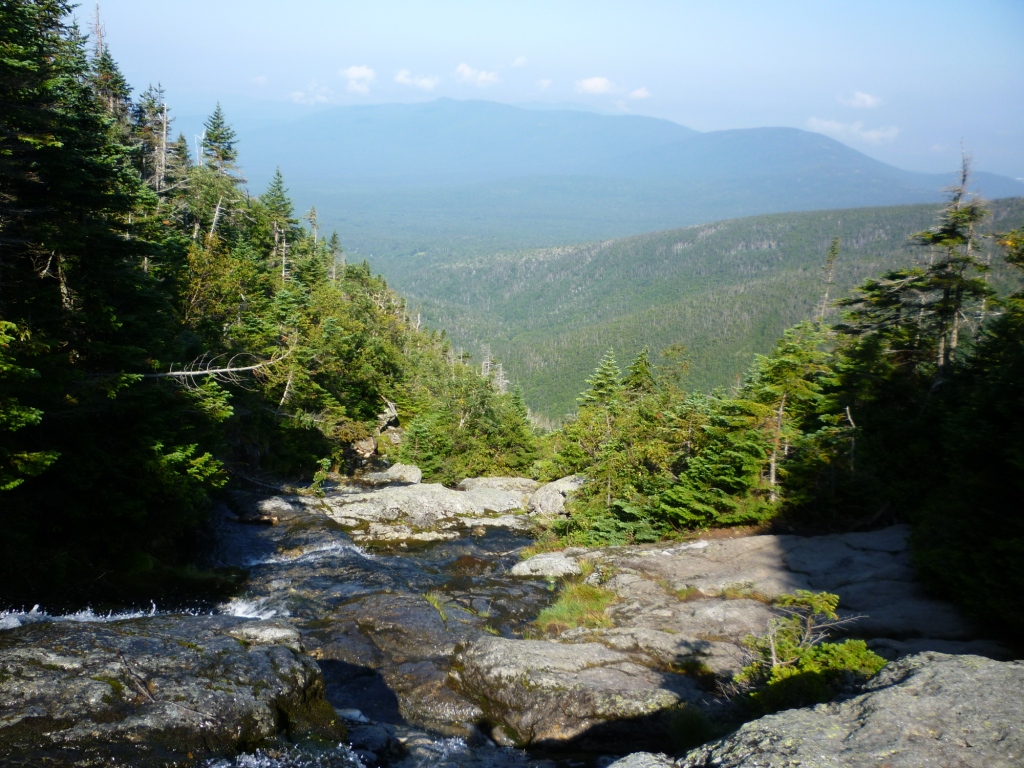 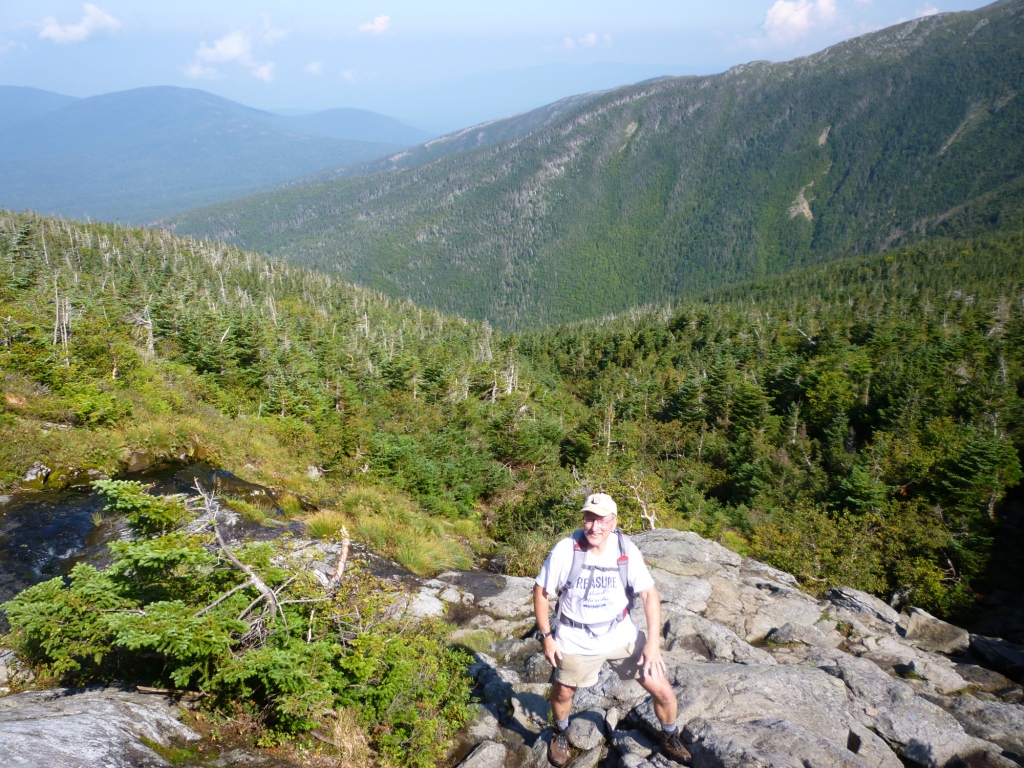 This was Roger Gagne's yearly trek up Mt. Washington and I was all too happy to join him. We did the classic loop up the Ammonoosuc Ravine Trail and down the Jewell. I had last climbed the AR Trail two years ago and forgotten how nice it is. After a steep climb we reached the top of the headwaters cascade at 4000' (left) and from then on we had continuous views from broad ledges (right). Mt. Washington loomed to the north (below left). 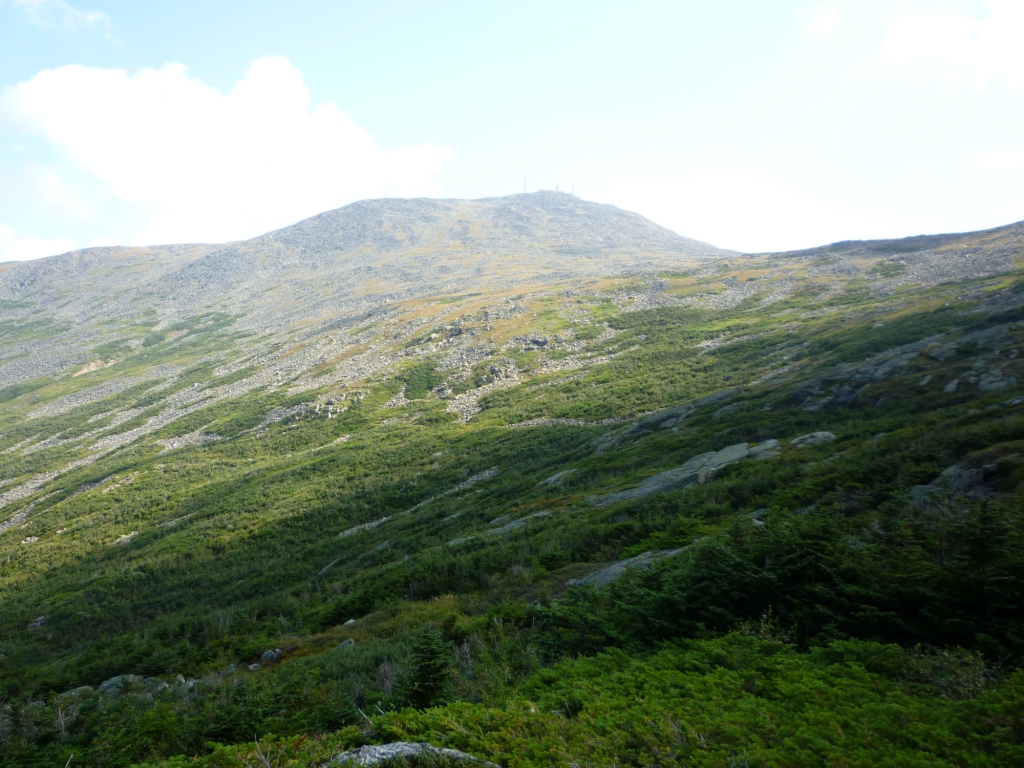 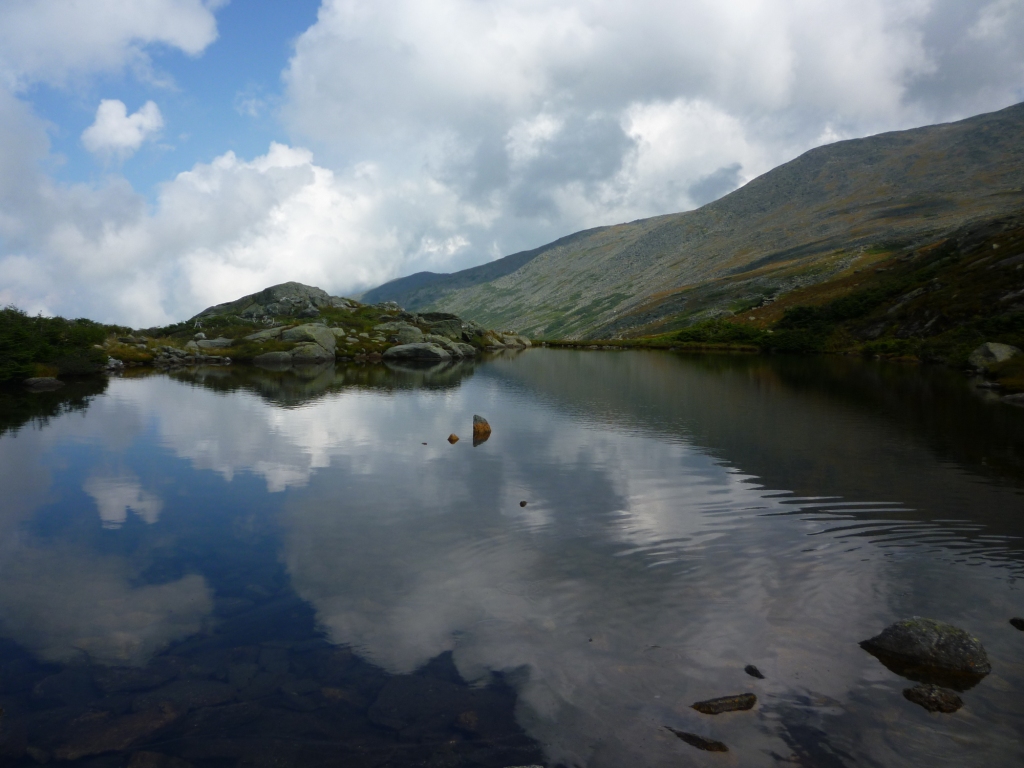 We got to the Lake of the Clouds Hut at ridgeline and turned left on the Crawford Path for the final climb. We took a break near one of the small lakes (right). Darby Field's blog of his first ascent of Mt. Washington (1642) says, "By the way among the rocks, there were two ponds, one a blackish water, and the other reddish" and I find it eerie that these small ponds are still there as Darby found them, evidence that he did actually climb Washington rather than just make it up. What an amazing feat it was. 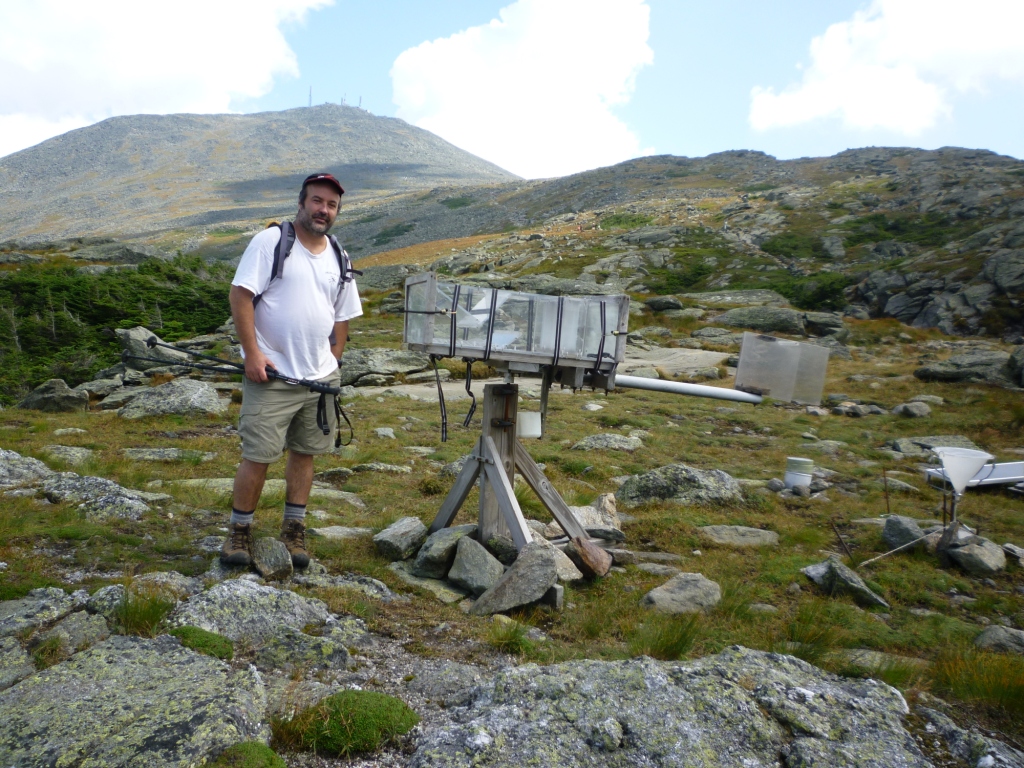 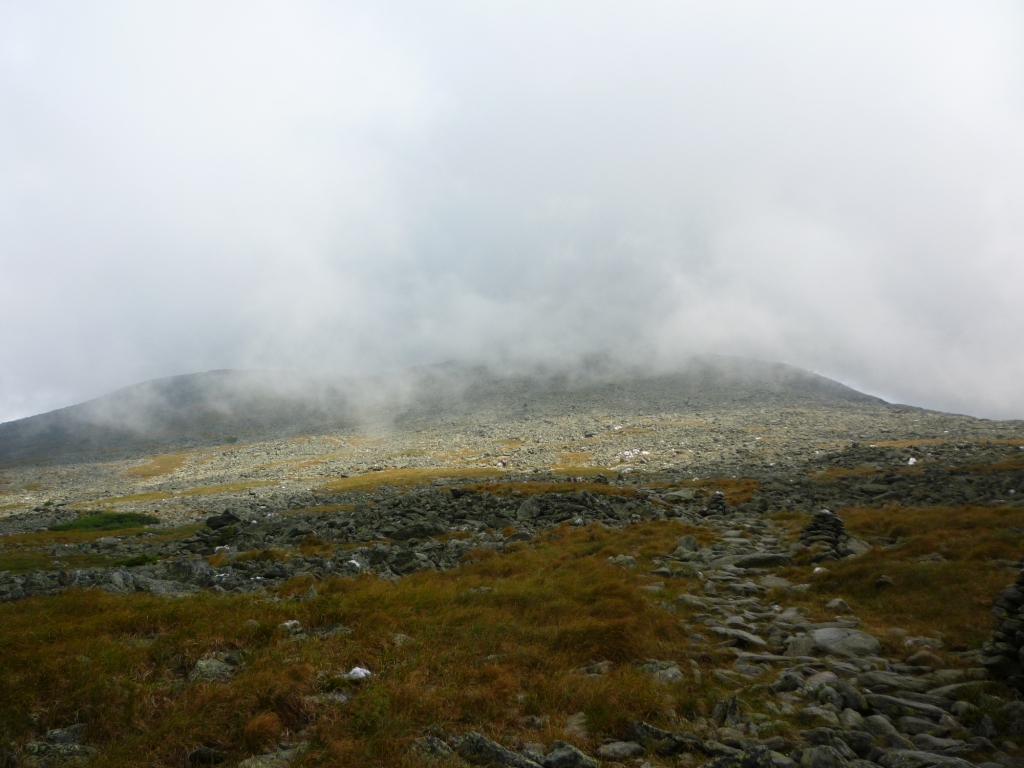 Near the lakes is a small air quality station run by the Lake of the Clouds crew, including a fogwater collector of my design from my Caltech days (left). The tundra vegetation here gets a lot of its water from fog so it make sense to monitor the fogwater composition. As if on cue the fog suddenly began to roll in, obscuring the top of the mountain (right). 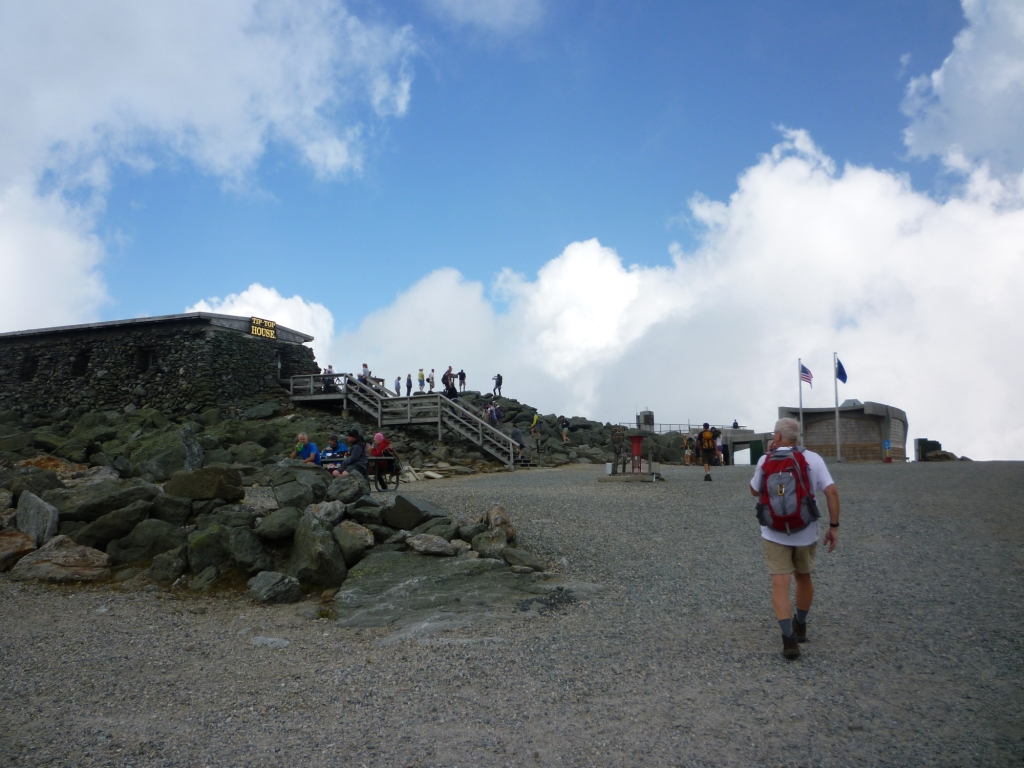 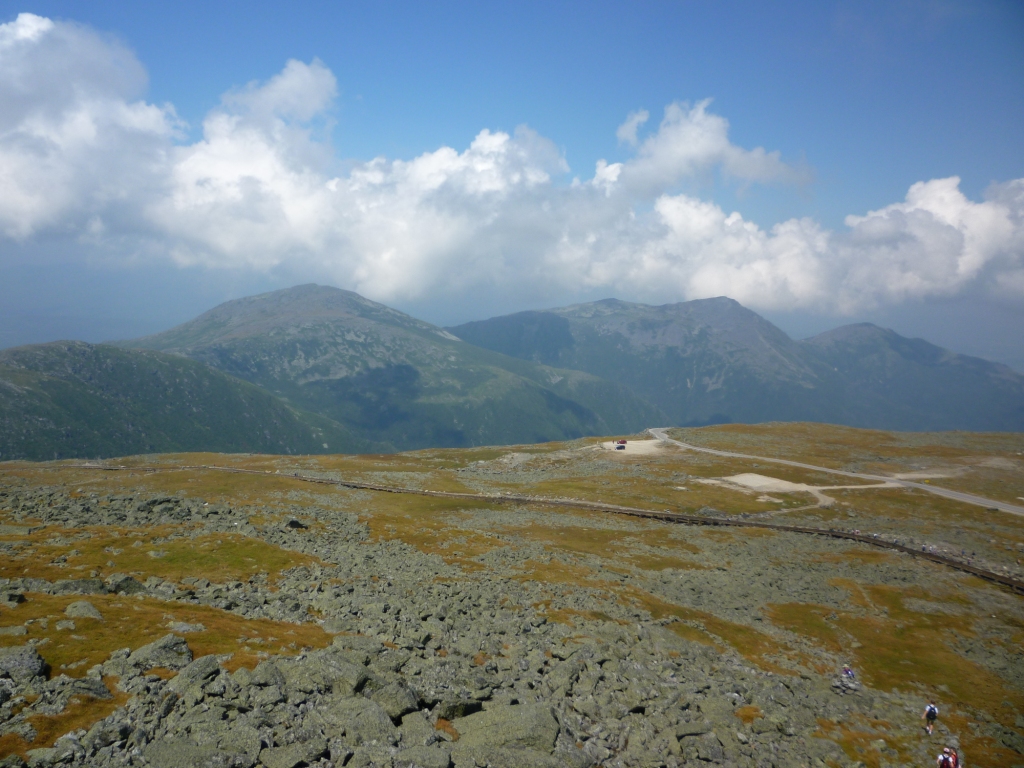 We made the final climb in and out of the clouds on the historical Crawford Path, built in 1816 by Ethan Crawford and remarkably well graded. Before we knew it we were at the top (left). Getting to the top of Mt. Washington is a bit of a downer because of the encounter with civilization. However, on that day the Auto Road was closed because of the annual bicycle race to the top and there were fewer tourists than usual. I read somewhere that the record time to the top by bike is longer than that on foot. We went to the cafeteria where I got a Coke and read through the long list of Mt. Washington casualties posted on the wall. Mt. Washington advertises itself as the deadliest mountain after Everest, which has always surprised me, and indeed the list is long. But scrutinizing it I could see that it included a few motorcycle accidents on the Auto Road. I doubt that there are many such accidents on the Annapurna. Before leaving the top I took the obligatory picture of the Northern Presidentials (right), with Mt. Clay on the left. 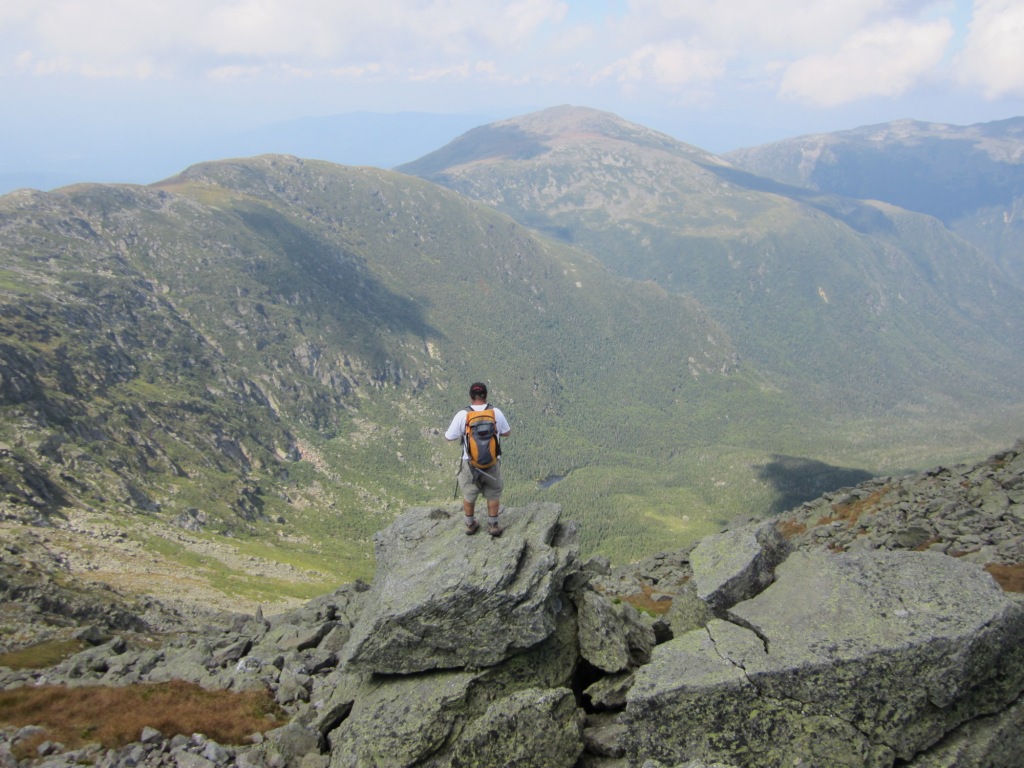 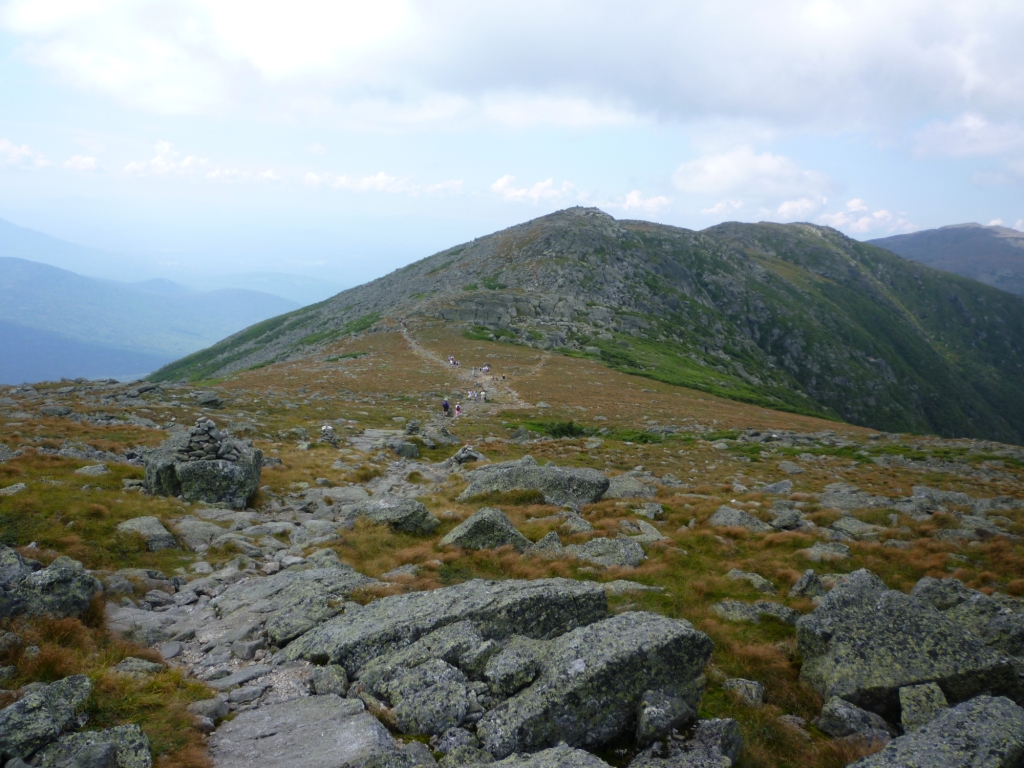 From the top we headed down to the trailhead of the Great Gulf Trail on the brink of the Great Gulf (left). This trail has long been a curiosity of mine because looking at the Great Gulf headwall from Mt. Clay it seems impossibly steep to climb. But it didn't actually look too bad. I will have to go down it one of these days for a visit to Spalding Lake, which nests at the base of the headwall (you can see it in the picture). We proceeded down the shoulder of Mt. Washington on the Gulfside Trail towards Mt. Clay. In the distance was a fork in the trail, where the Gulfside Trail goes left and the Mt. Clay Loop (which I maintain for the AMC) goes right. There were a few groups ahead of us and I figured that I would keep stats of how many chose the Clay Loop over the Gulfside. It wasn't even close: Gulfside all, Clay zero. Clay gets no respect because it's not officially recognized as a 4,000 footer, but they don't know what they're missing because it's such a beautiful trail (and so well maintained). 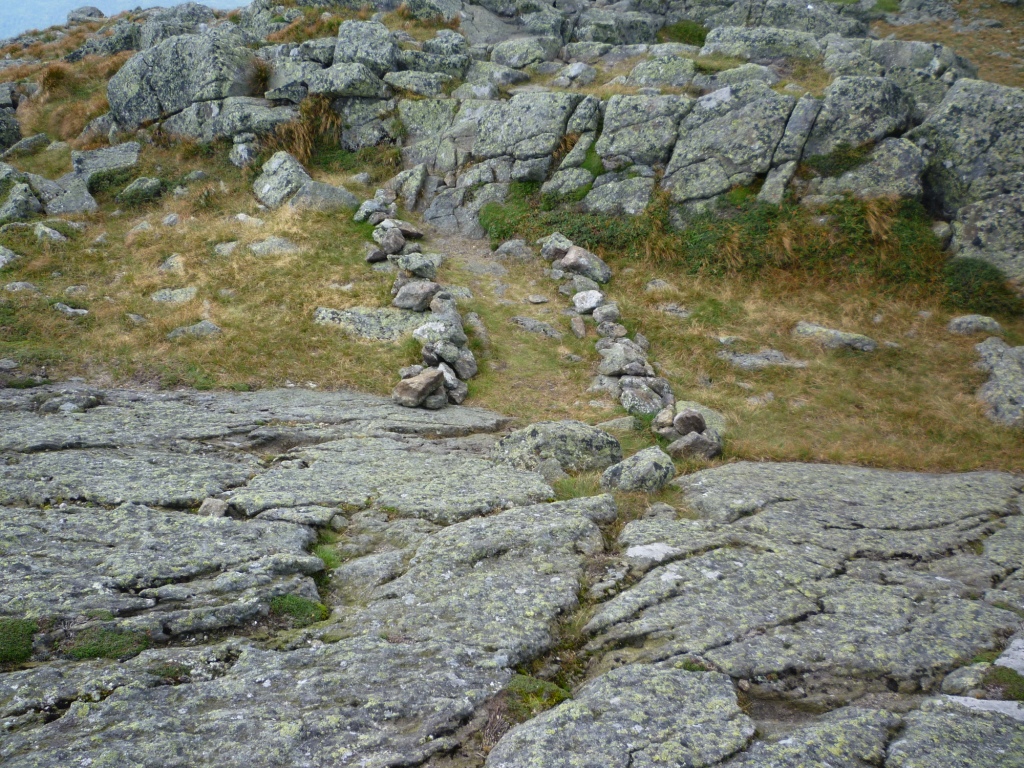 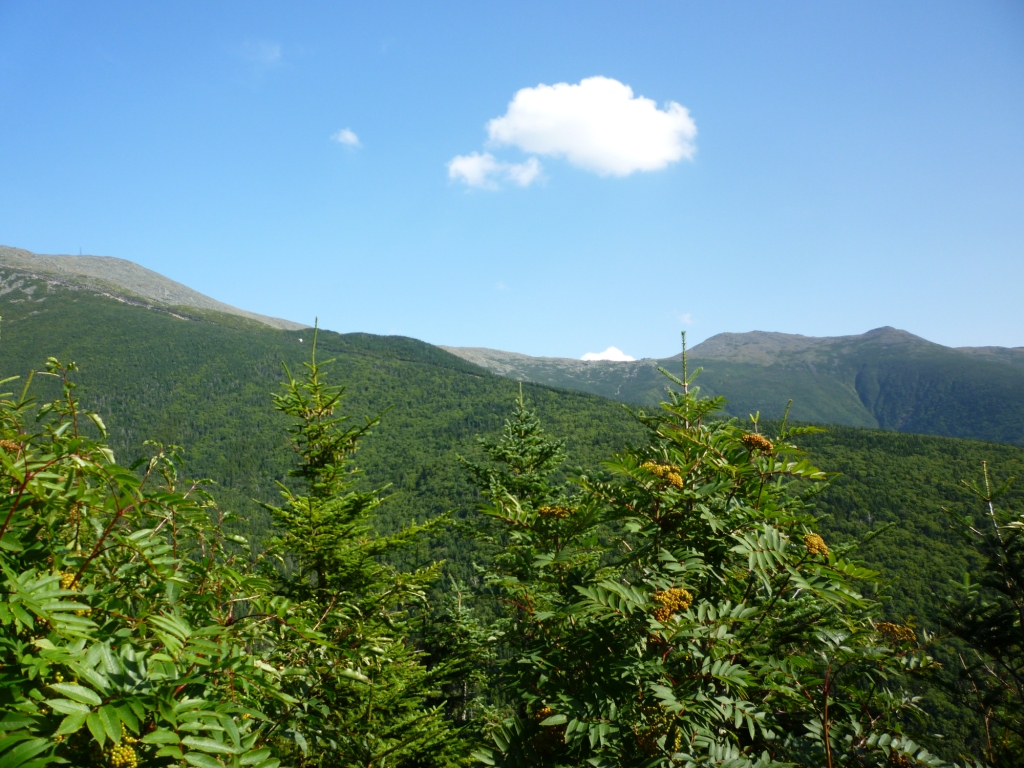 On our last visit to Mt. Clay Roger and I had built a scree wall on the South Peak to protect the local vegetation and I wanted to check out if it was still standing or in ruins, so even though this wasn't an official trail maintenance trip I fought back the statistics and chose the Mt. Clay Loop at the fork. I was pleased to see all the cairns on the trail in good shape, and the scree wall in its original condition (left). As I contemplated the wall a trio of German kids came by and I observed them. They dutifully followed the trail between the scree wall and I was very pleased by that. On second thought, Germans love to follow rules so this wasn't much of a test. But I didn't want to wait for a group of Italians, so I crossed over to the Gulfside Trail and met Roger at the top of the Jewell for the hike down. A day above treeline always feels special, you're in a different world up there and the return to the woods brings you back to the familiar. Below treeline the Jewell still offers some views from blowdowns, the last one being at 3,100' (right) and after that it's an easy descent to the trailhead.