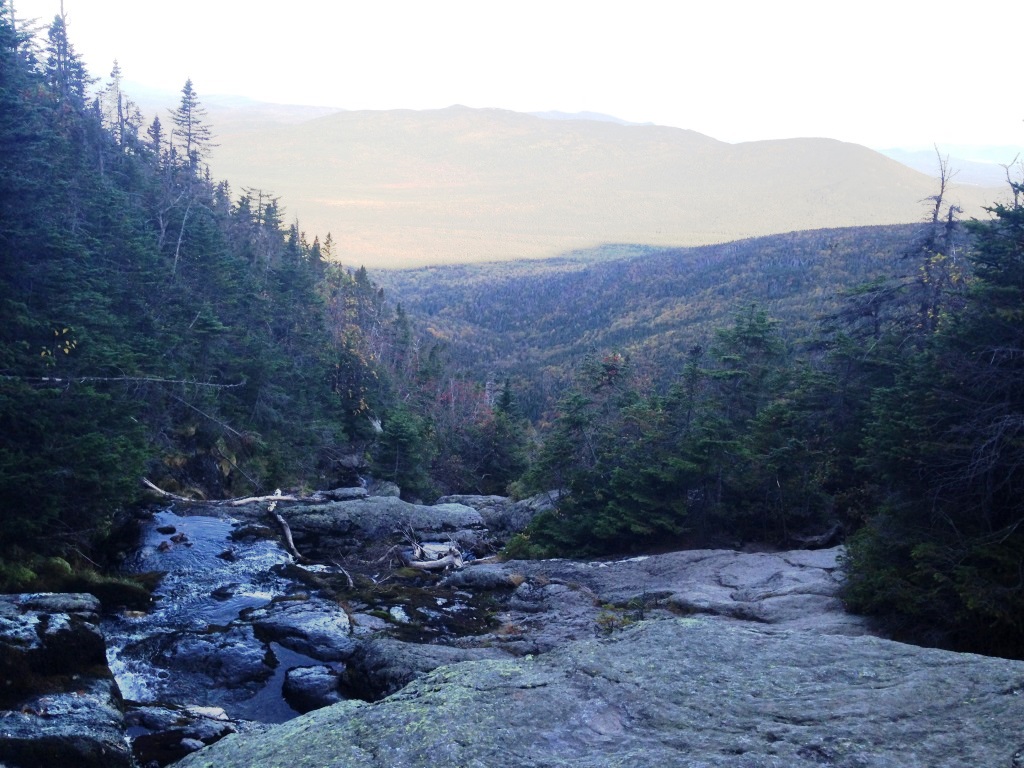 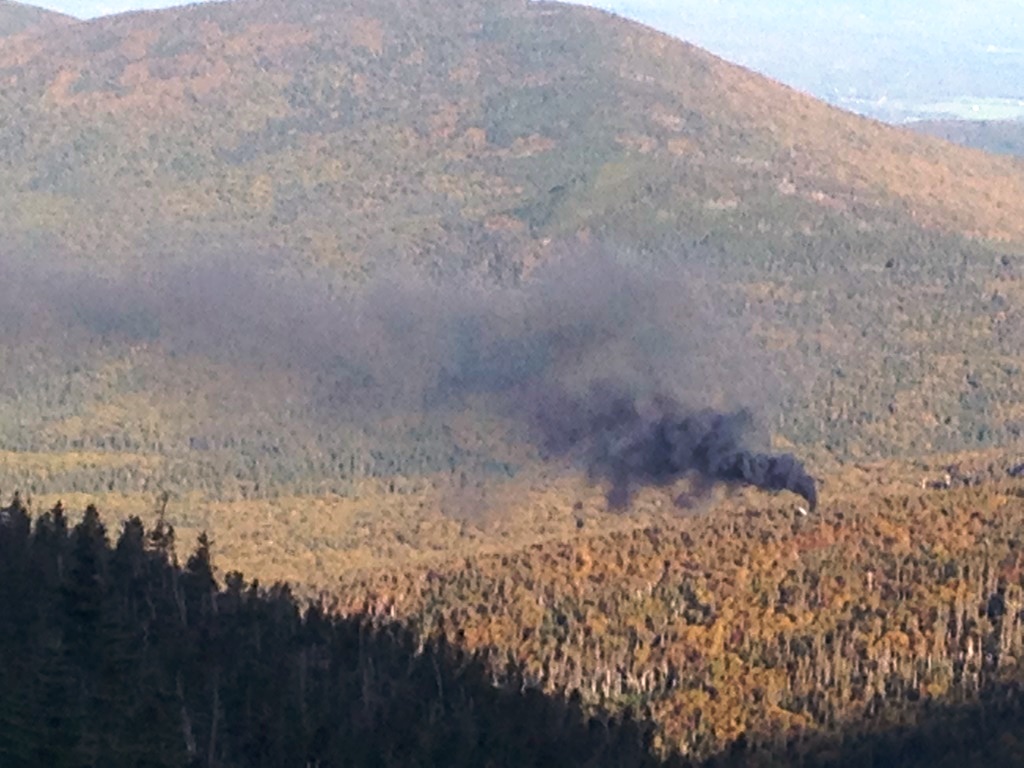 It was an unseasonably warm September Saturday with clear skies so a great time to hang out above treeline in the Presidentials, but some crowding was to be expected on the summits. We solved the crowd problem by doing a circuit around Mt. Washington, avoiding the major summits and enjoying a full day above treeline on little-used trails. We went up Ammonoosuc Ravine Trail (left) in time to see the first Cog Railway train of the day come up (right). The first train is allowed to use the original coal engine and emits disgusting black soot. I don't see the point. 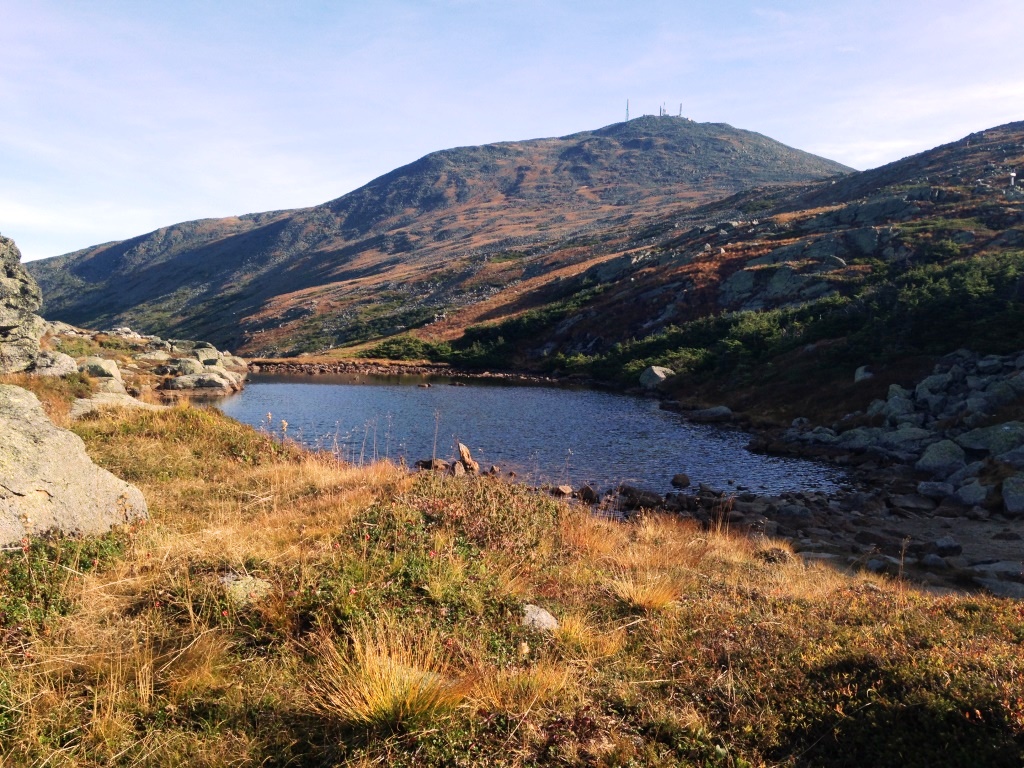 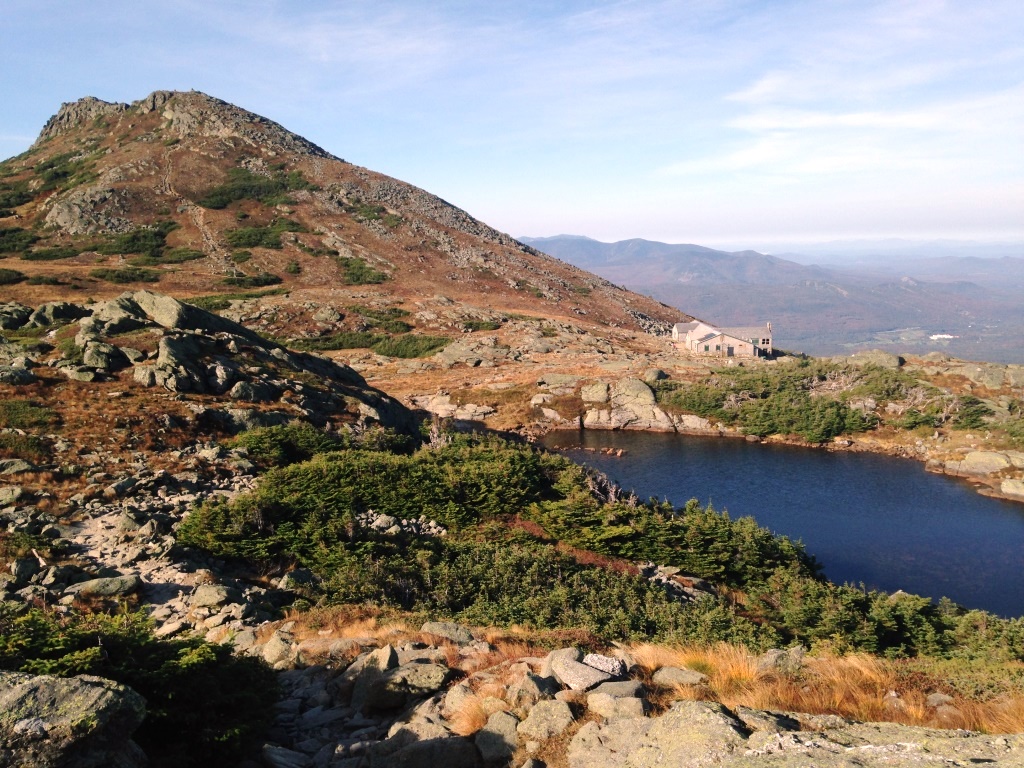 We got up to the Lakes of the Clouds hut, which was closed and boarded up for the season, and took the Crawford Path up to the Camel Trail. By now we were fully above treeline and would stay there for the the rest of the day. The second lake made a good foreground for views up to Mt. Washington (left) and looking back at the hut and Mr. Monroe (right). 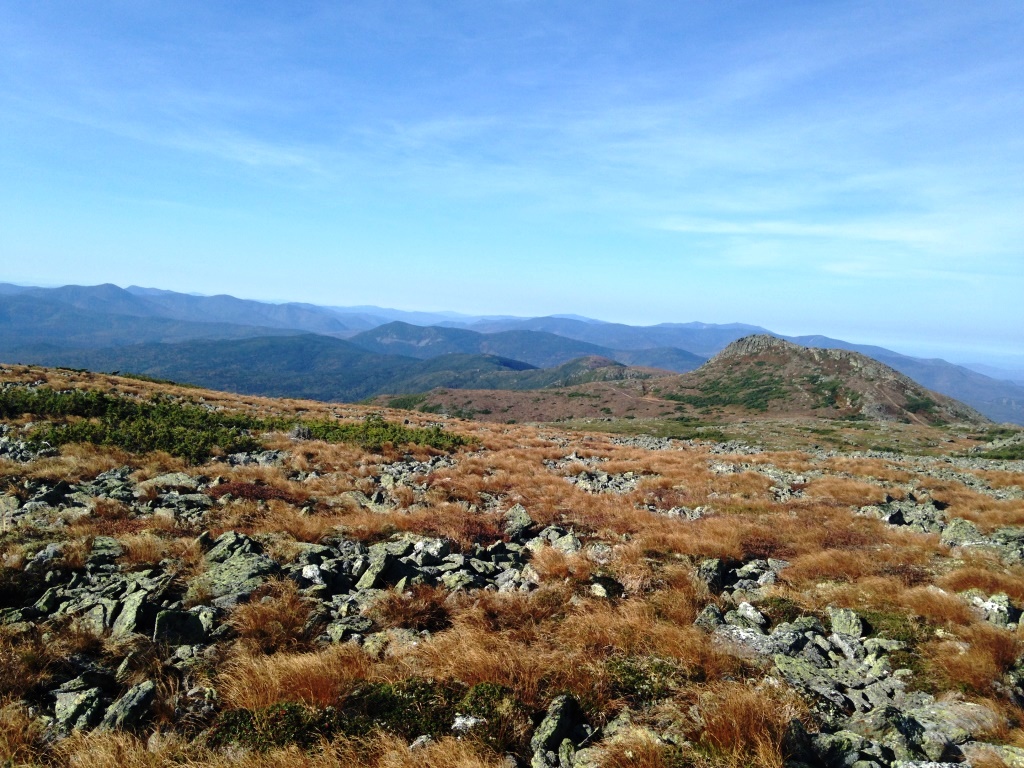 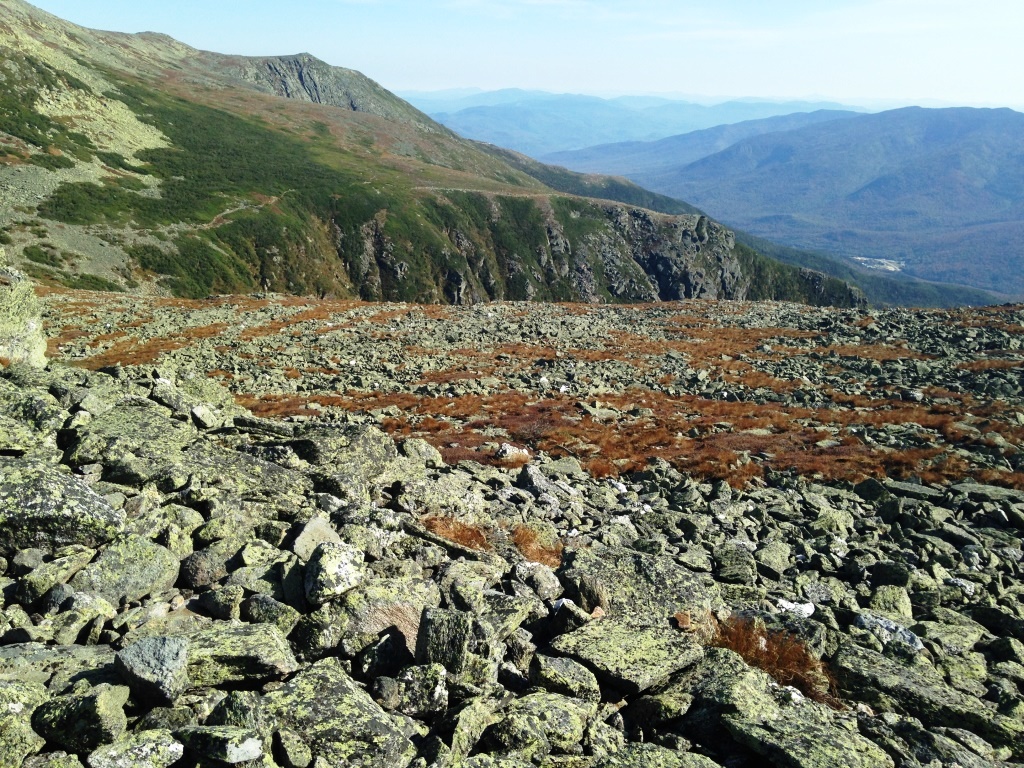 The Camel Trail and other similar trails (Crossover, Lawn Cutoff, Alpine Garden, etc) stay mostly flat as they meander on the east side open shelf below the summit of Mt. Washington. They are very little used because all hikers want to do is reach the summit. We had no such desire, having summited Mt. Washington many times. And so we had these little-used trails to ourselves. They offer beautiful views all around (left). At the end of the Camel Trail we took a detour on the Davis Path to go to Boott Spur and peer down into Tuckerman Ravine (right). 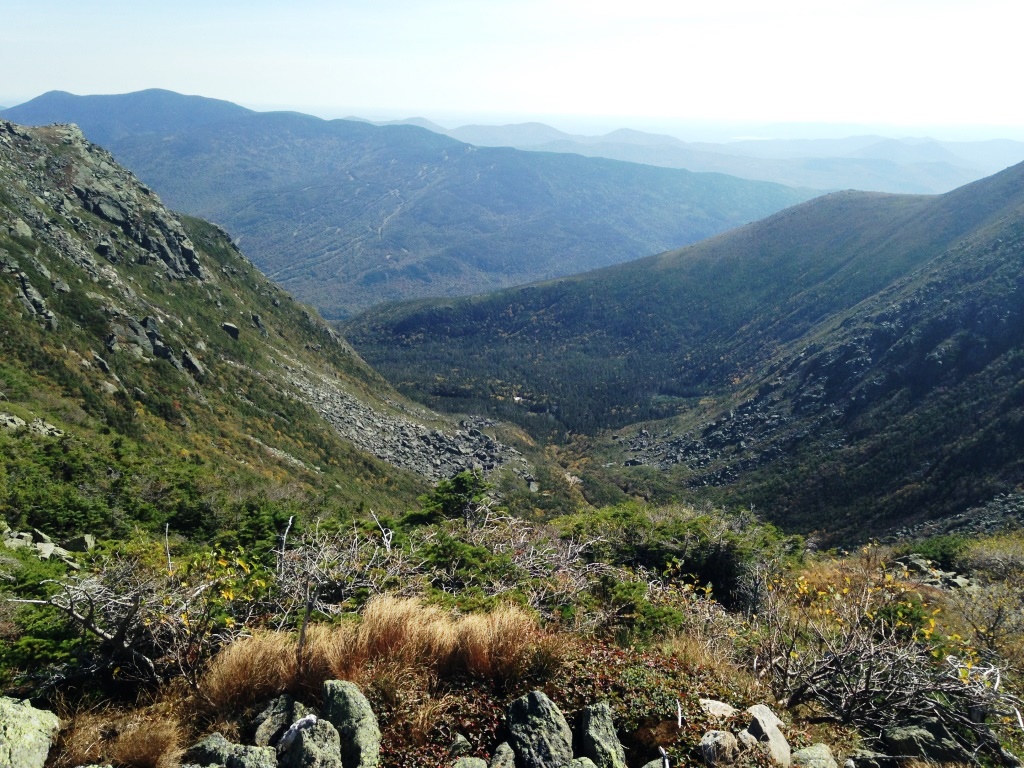 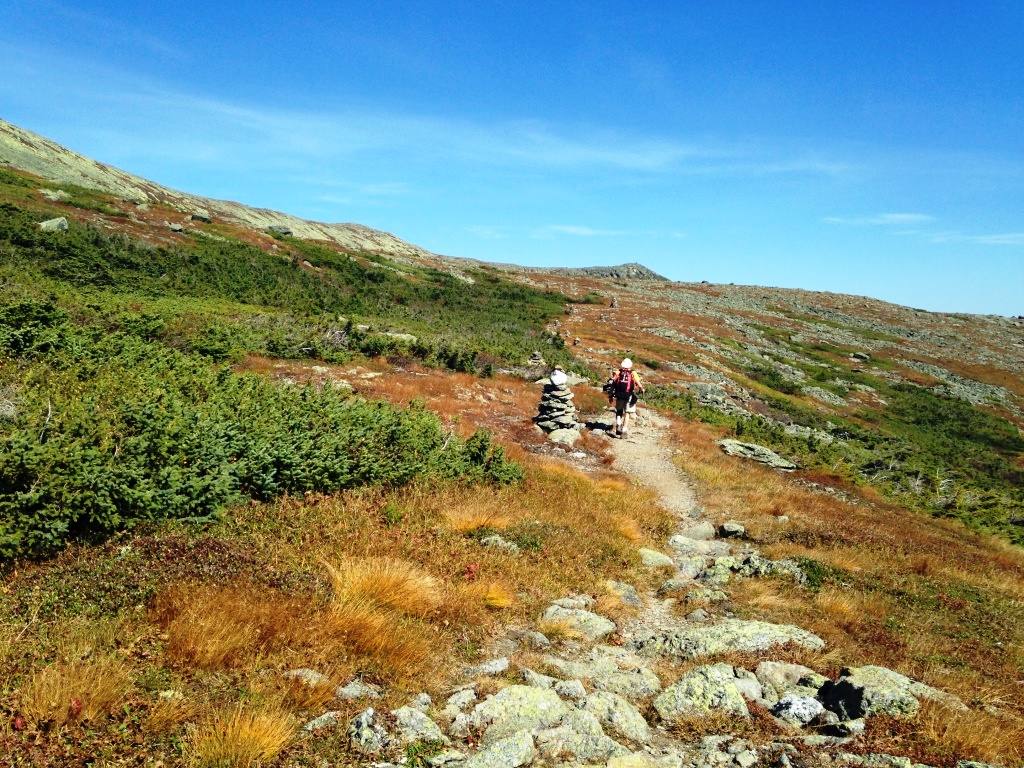 From there we took the Lawn Cutoff to the headwall of Tuckerman Ravine (left) where we crossed a procession of hikers going up the Tuckerman Ravine Trail to Mt. Washington. We promptly said goodbye to the crowds by heading onto the Alpine Garden Trail (right). 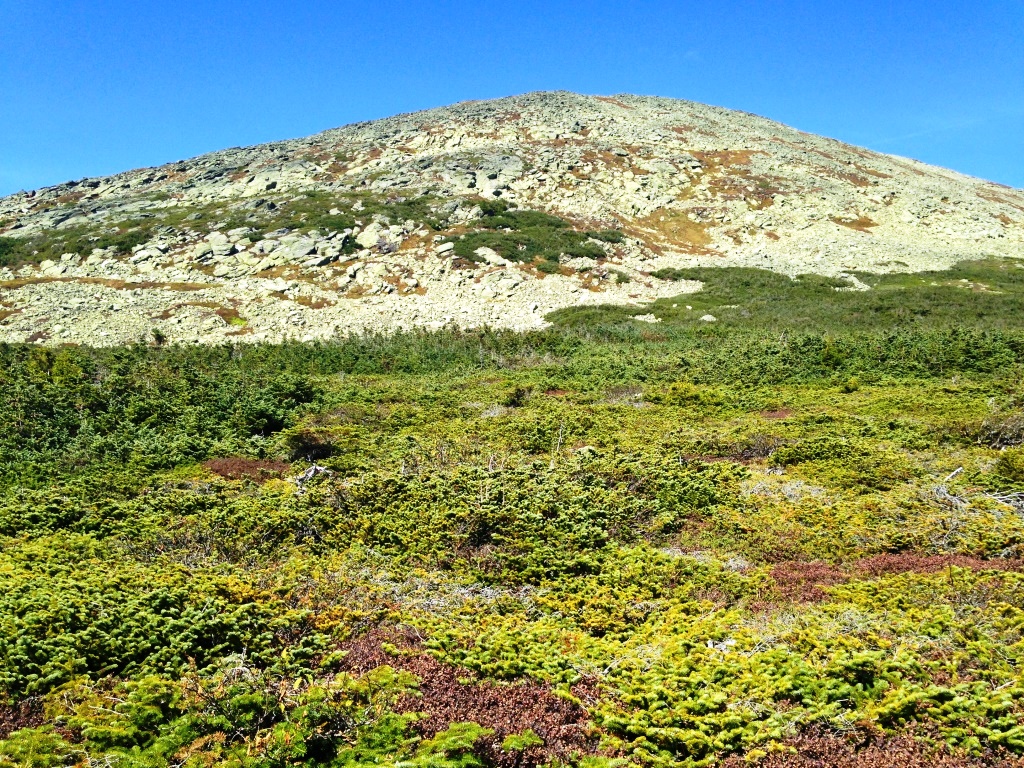 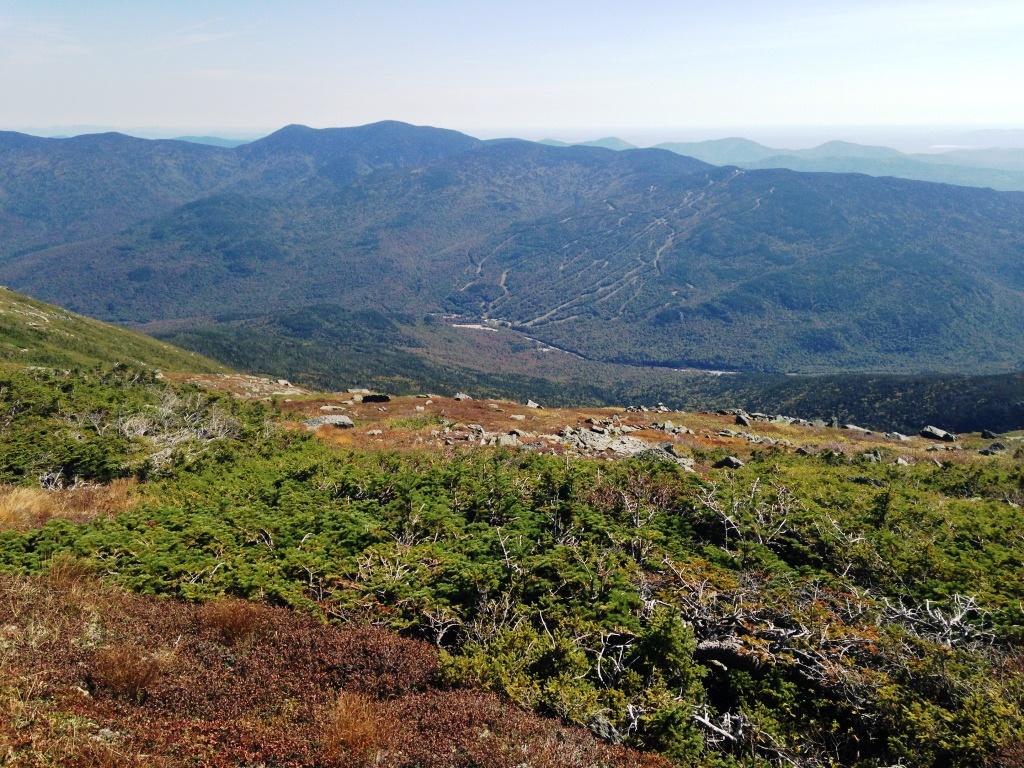 The Alpine Garden continues along the east side of Mt. Washington, and we had great views all around, looking up to the top where an eerie green lichen color was covering the mountain (left) and down below to the Wildcat ski area (right). 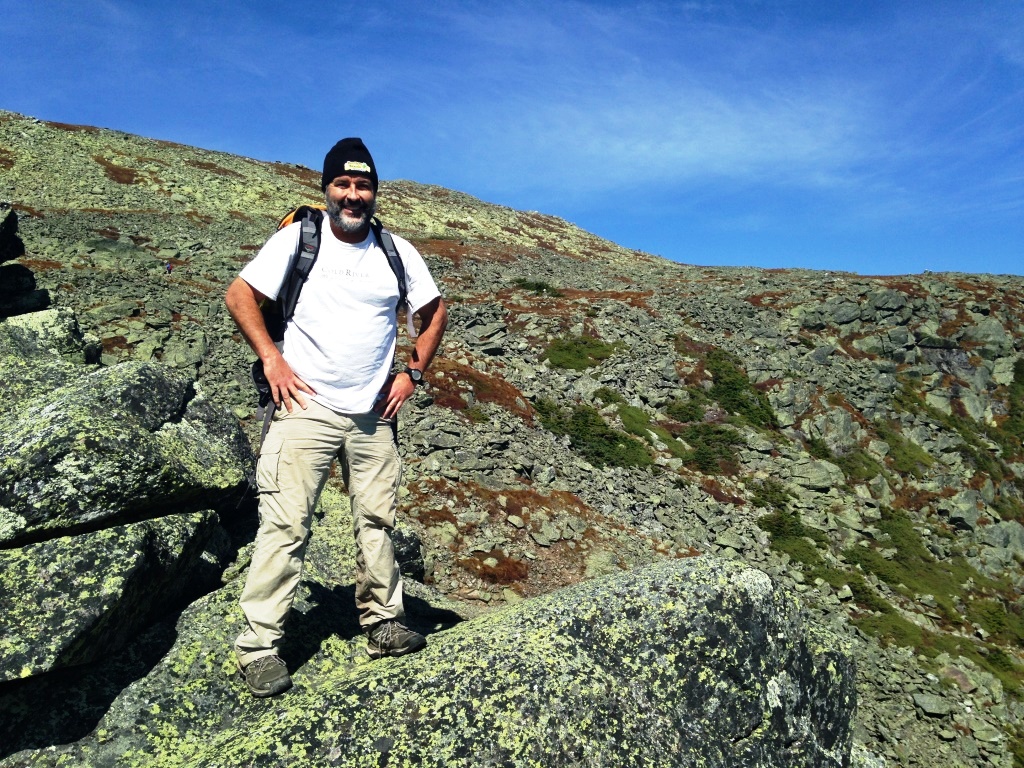 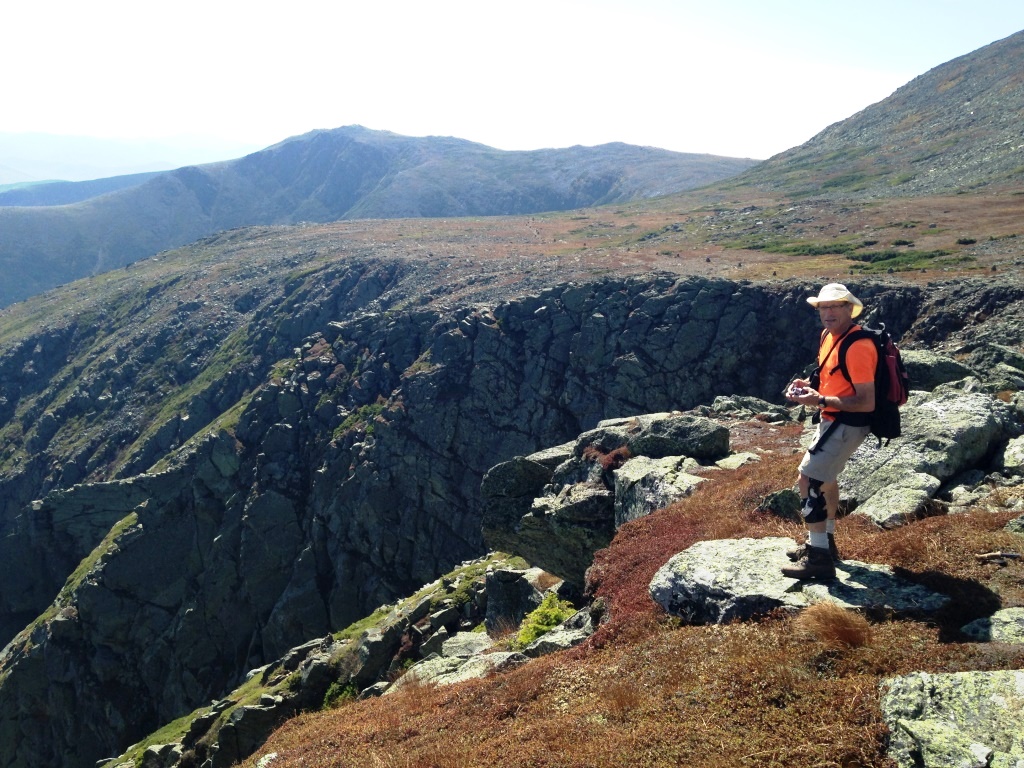 We got in this manner to the rim of Huntington Ravine (left and right), which we had hiked up by the Huntington Ravine Trail some years before. That trail is very steep and exposed, and considered the most dangerous trail in the White Mountains. I will endorse that and rank the Six-Husbands Trail as the unheralded second. 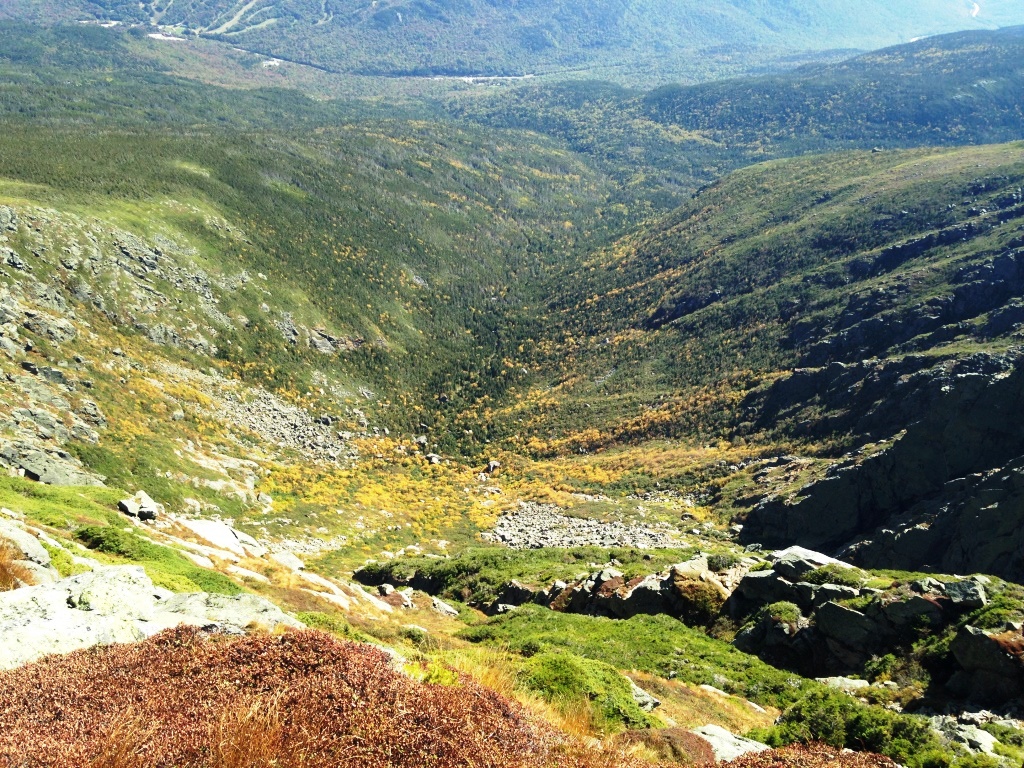 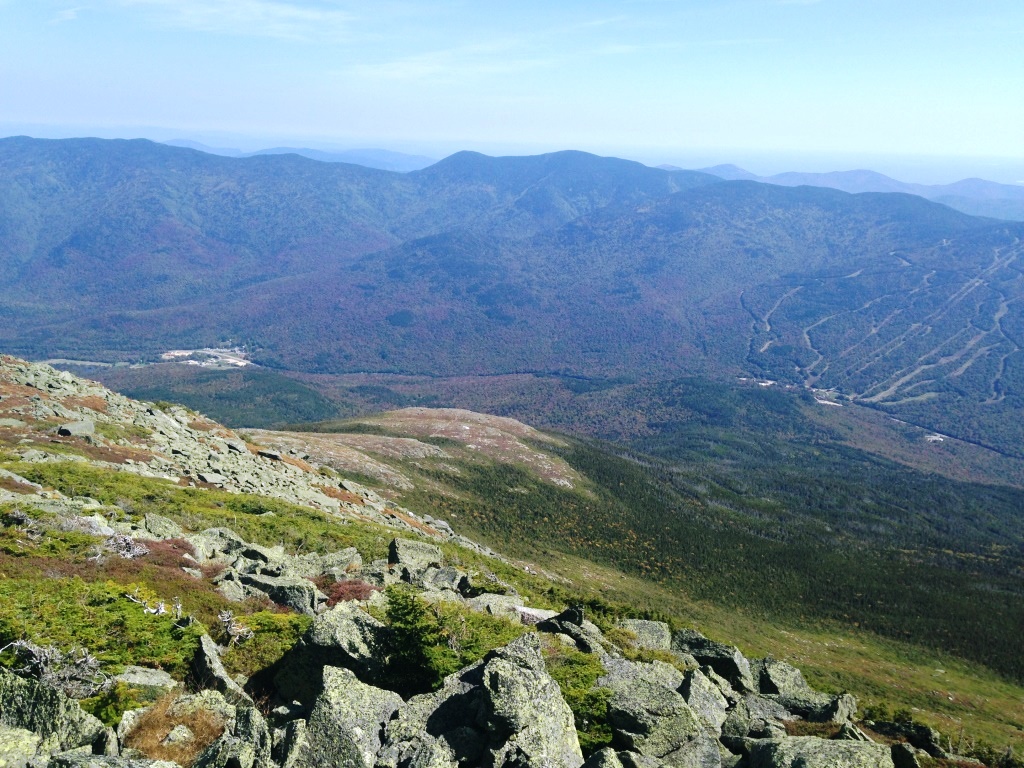 We peered down into Huntington Ravine (left) but the picture doesn't do justice to the verticality of the place. From there we continued on the Alpine Garden to the Nelson Crag Trail, where we took a side trip to Nelson Crag. I had never been on the Nelson Crag Trail before because it seems to go along the Auto Road and who would want to do that, but in fact Nelson Crag was really nice and looking down showed that it remains above treeline (and away from the road) for a long distance. We hung around Nelson Crag for some time and saw no one. One more to-do hike on my list. 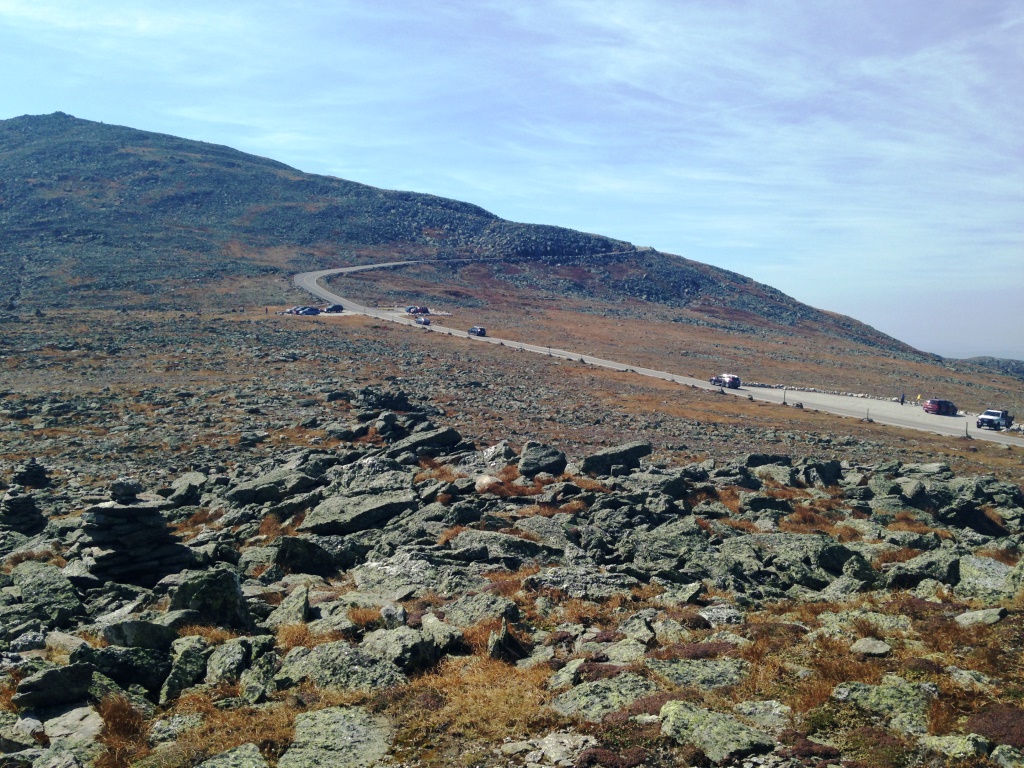 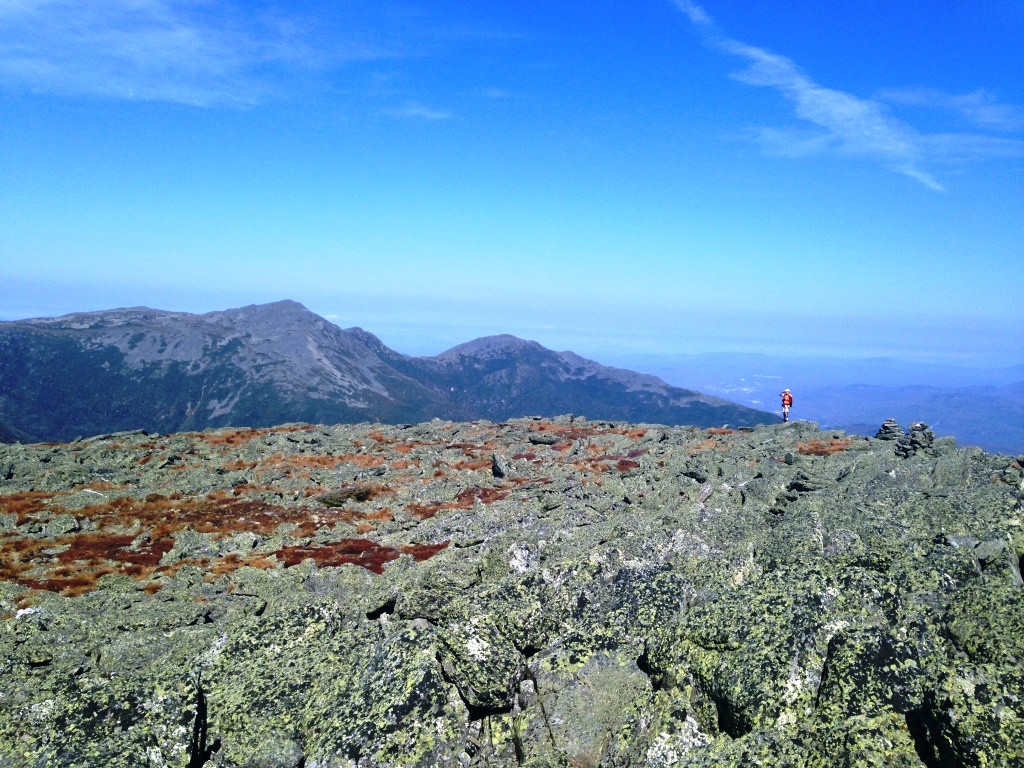 We then climbed up the Nelson Crag Trail to Ball Crag, which at 6,100 feet is just a bump off Mt. Washington. On the climb the trail was indeed often within sight and sound of the Auto Road (left). But it also gave great views of the northern Presidentials from the east side (right) and it was deserted. 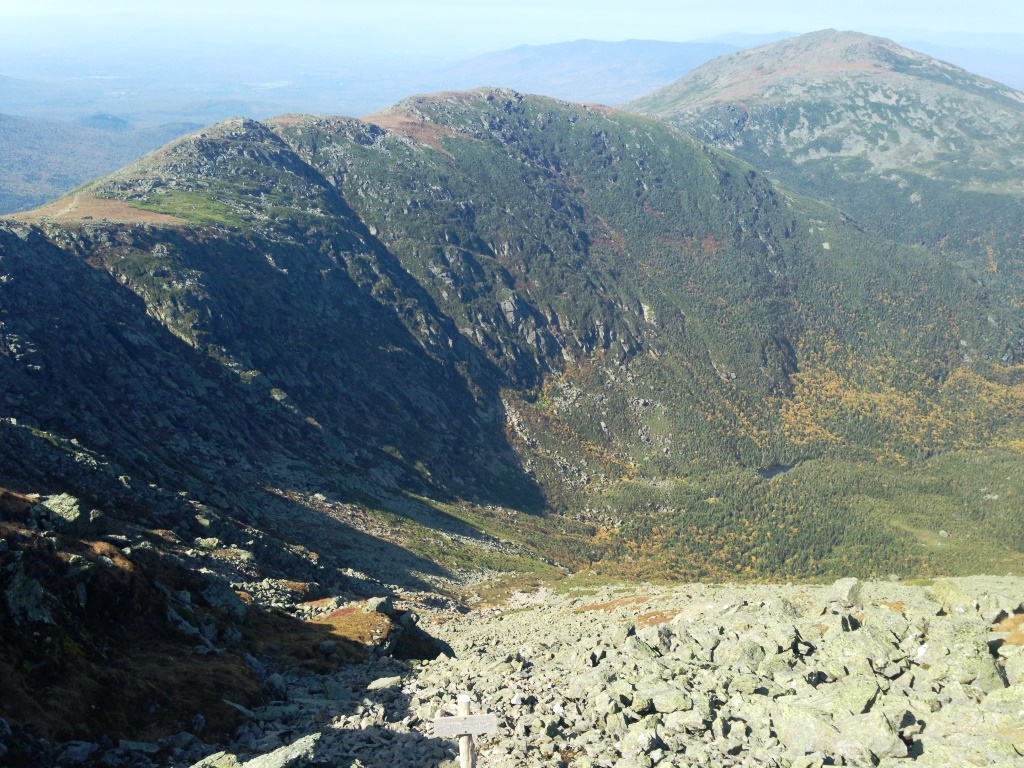 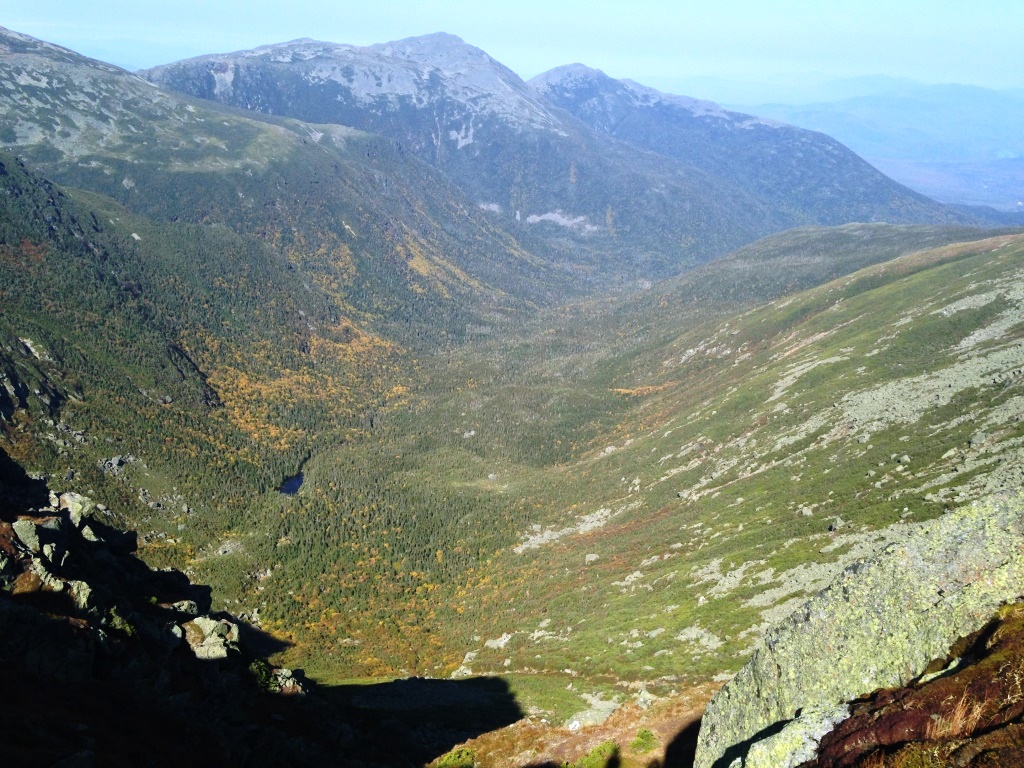 From Ball Crag we descended to the Auto Road, and crossed it to get on some herd path that linked us to the Gulfside Trail around the north side of Mt. Washington. The peak was within a stone's throw but more interesting was the skirting of the Great Gulf (left and right), with excellent views of tiny Spaulding Lake. Spaulding Lake is hard to get to, we had done a great hike to it some years ago. 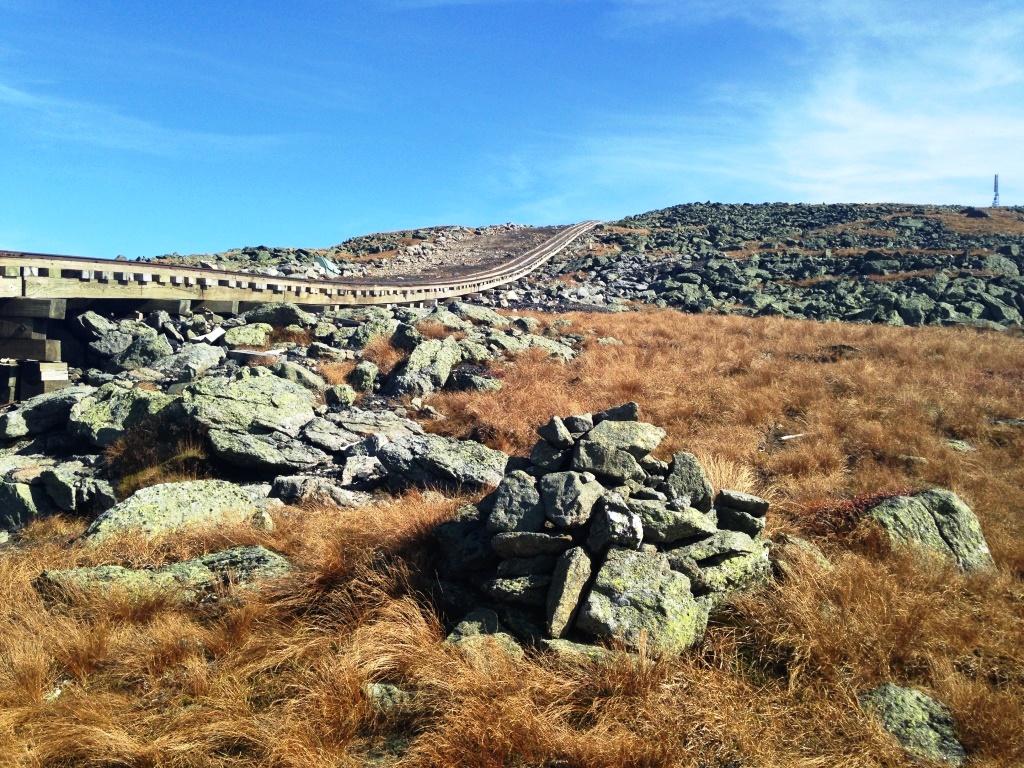 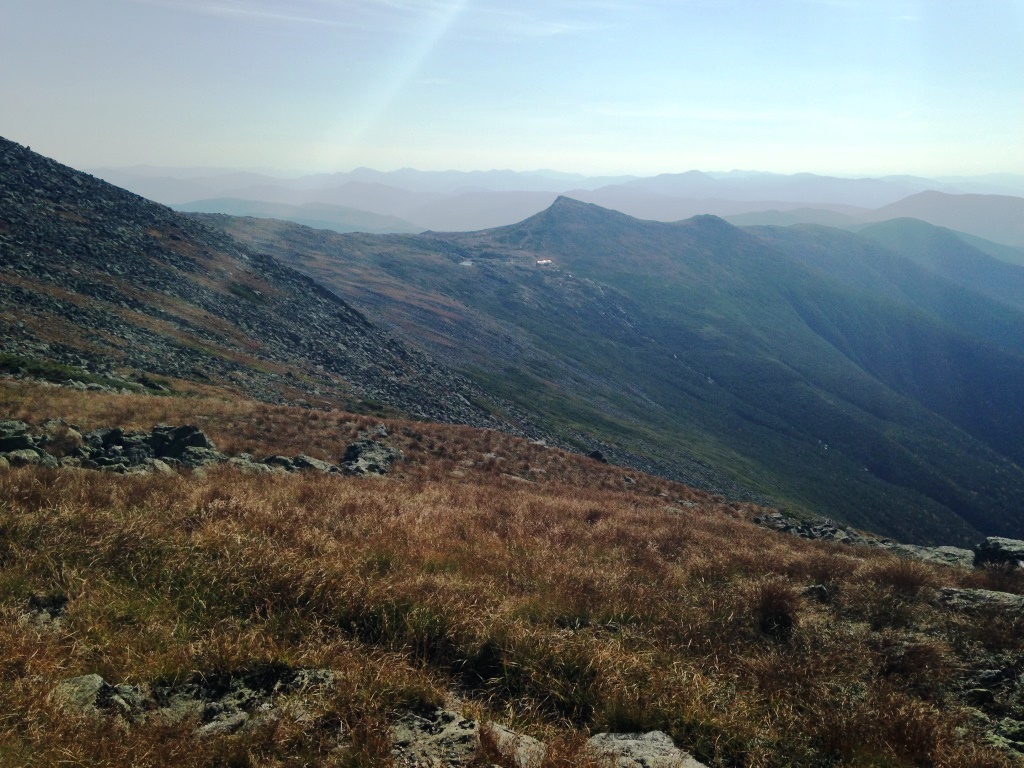 From the Gulfside Trail we took the Westside Trail, which now took us around the west side of Mt. Washington and back to the south side. We crossed the Cog Railway (left) and eventually got back to views of Lakes of the Clouds and Mt. Monroe (right), closing out the Mt. Washington Circuit by the Crawford Path and back down to Ammonoosuc Ravine. 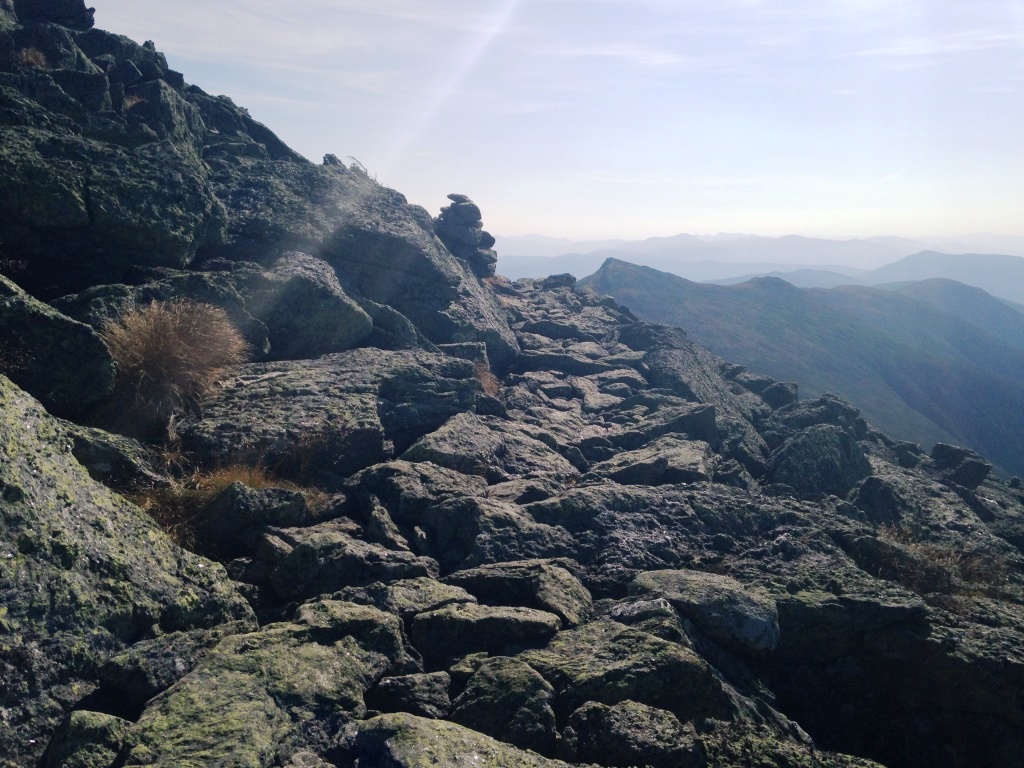 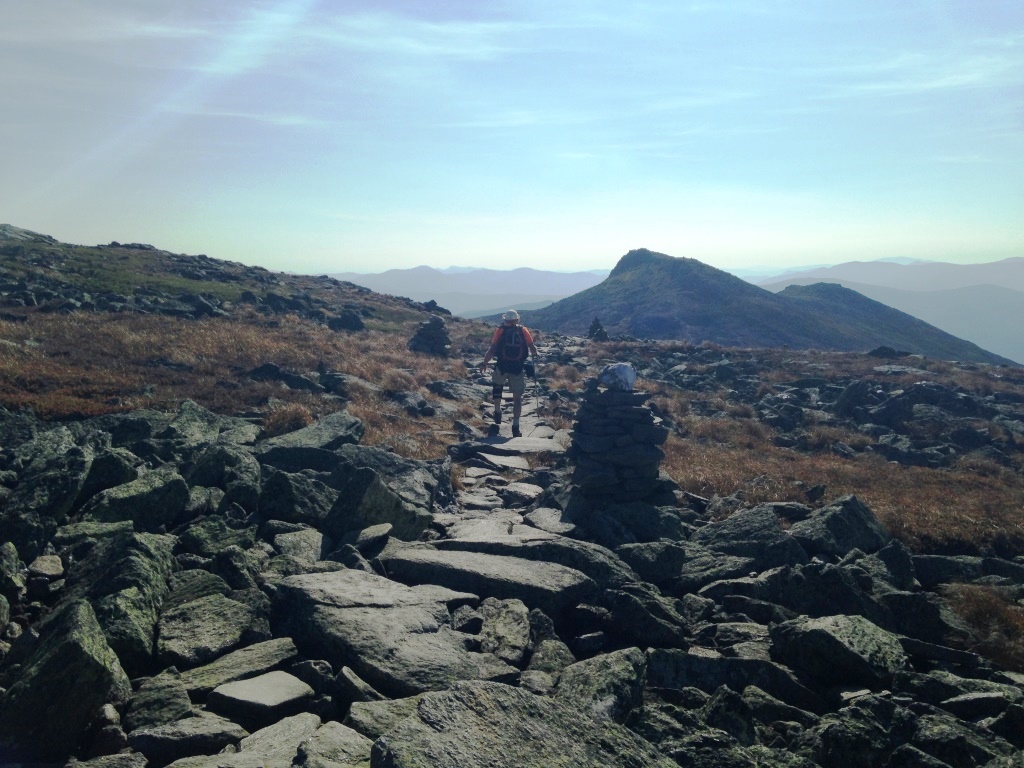 But what struck me most on the Westside Trail is the incredible trailwork of flat stones that made the trail often feel like a Roman road (left). The trail was constructed at the turn of the 20th century by J.R. Edmands, famous for his excellent trails in the White Mountains. What is interesting is that he would devote such effort to a little-used trail, but there may have been a different vision at the time. When we got back to the Crawford Path I noticed again the fine trailmanship (right) but that's a main drag up Mt. Washington so that makes more sense. Maybe I need to choose less rough trails.