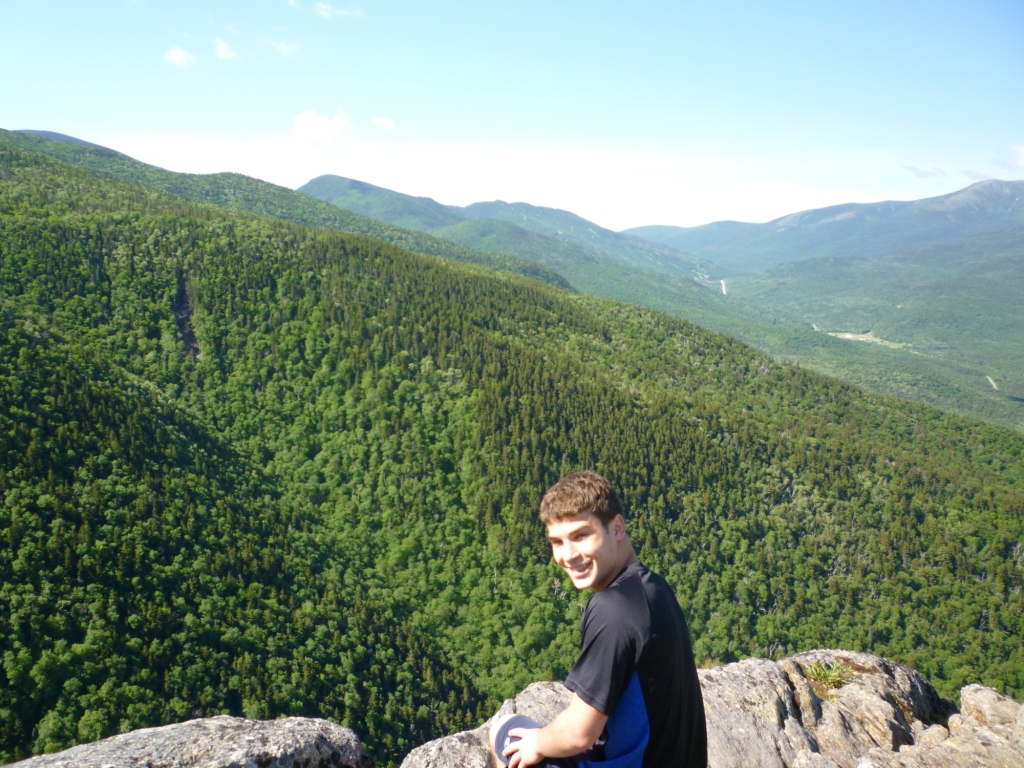 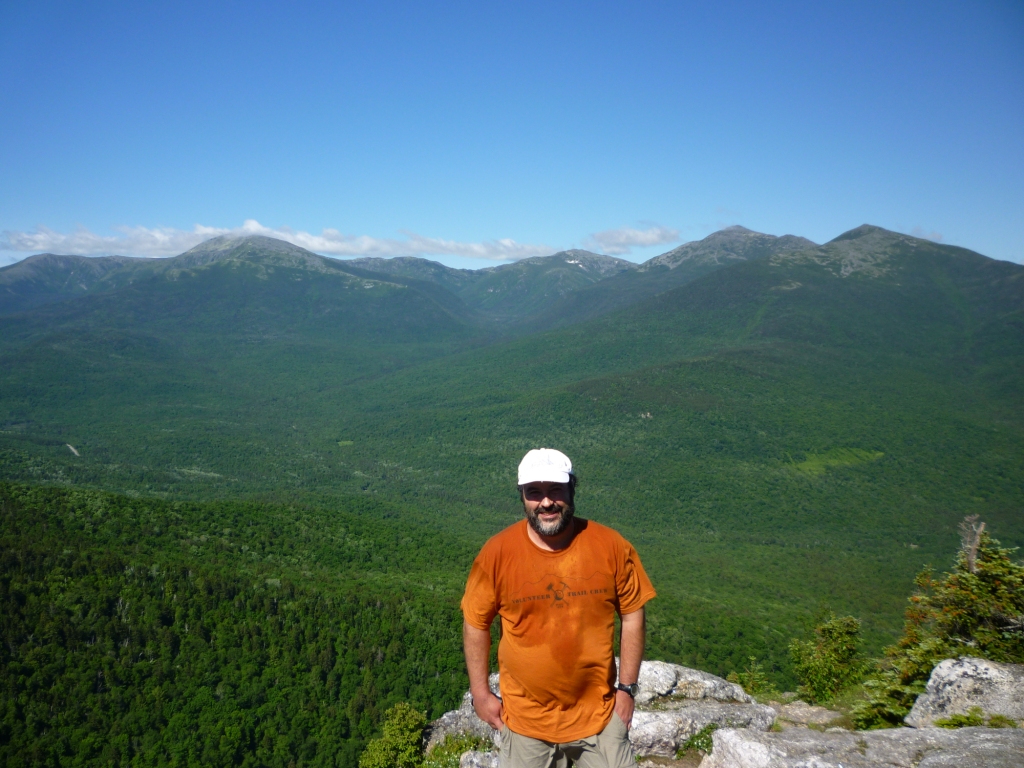 Middle and South Carter were still on Alex's to-do list for climbing all the 4,000 footers of New Hampshire so off we went. We started from the northern Imp Trailhead (1,270') and climbed through a hemlock forest, which gave way to birches at 2000' (that's typically where the hemlocks give up). The trail had great footing which made for very pleasant walking. At 3,100' we reached Imp Face, a spectacular cliff with views to the south of the Mt. Washington Valley (left), and to the west of the Presidentials (right). Patches of snow remained in Jefferson Ravine. 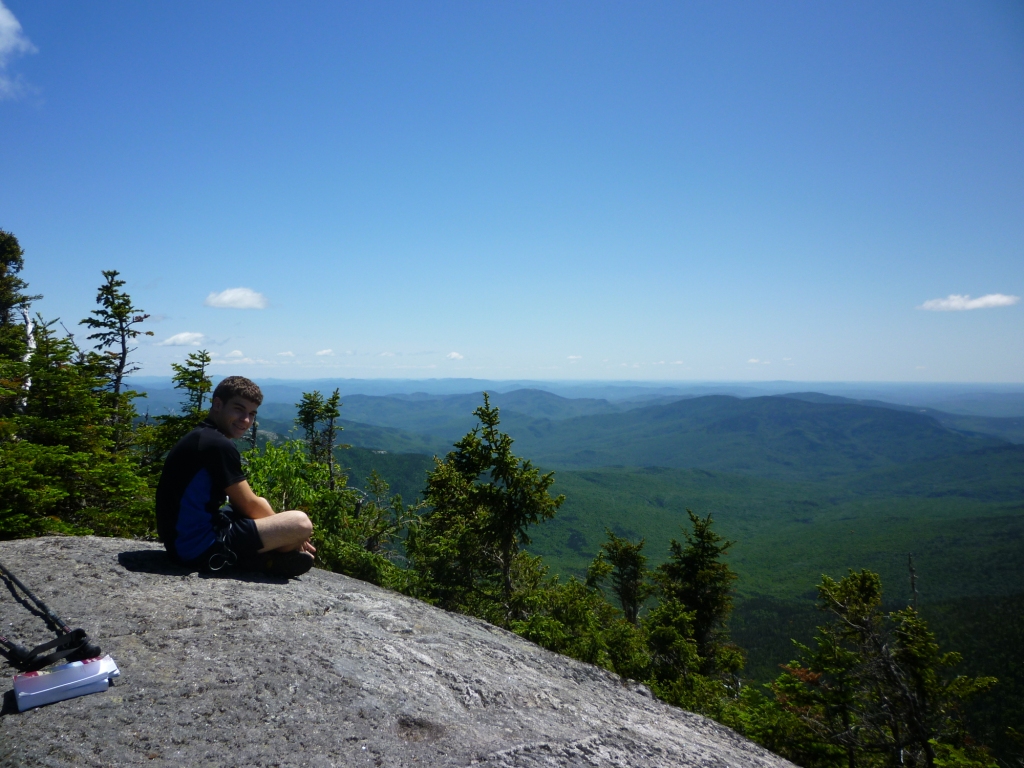 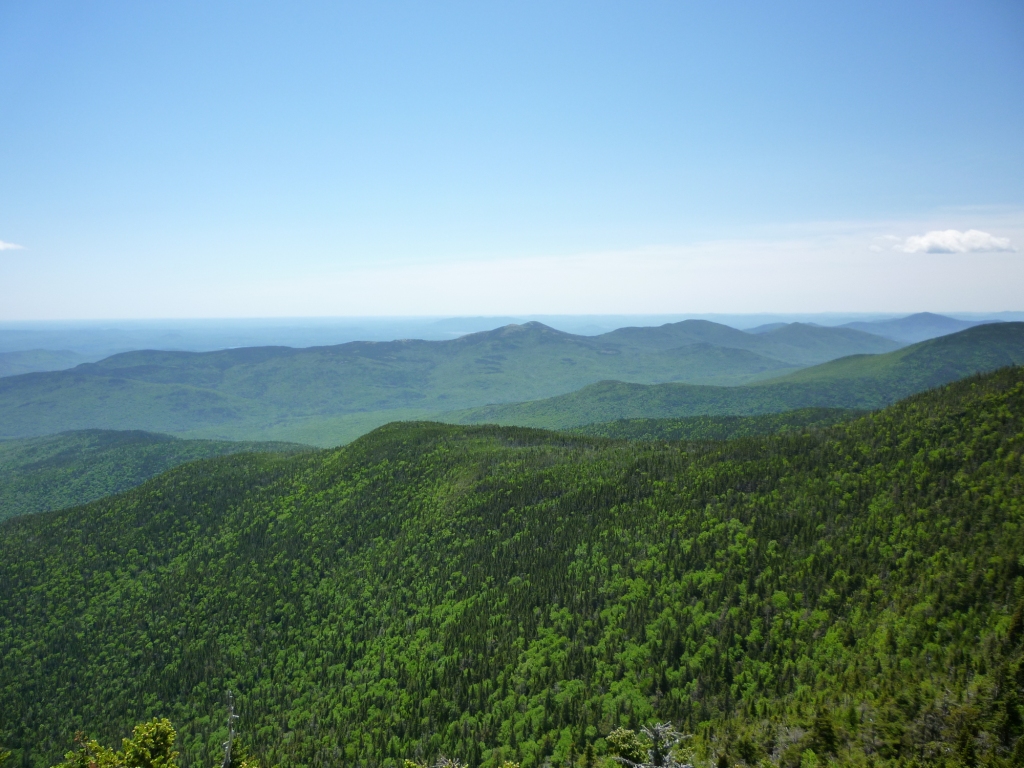 Continuing the climb we reached the North Carter Trail, which climbed straight at a steady grade to the Carter-Moriah Ridge with trail of the same name at 4,470'. Even at that altitude the range was still deeply wooded. We dropped our packs and did the 0.4 mi. (RT) side trip left to North Carter, which had absolutely outstanding views of the Wild River Valley to the east (left and right). This is advertised in the guidebook as one of the finest views from the Carter-Moriah Range and indeed it is. 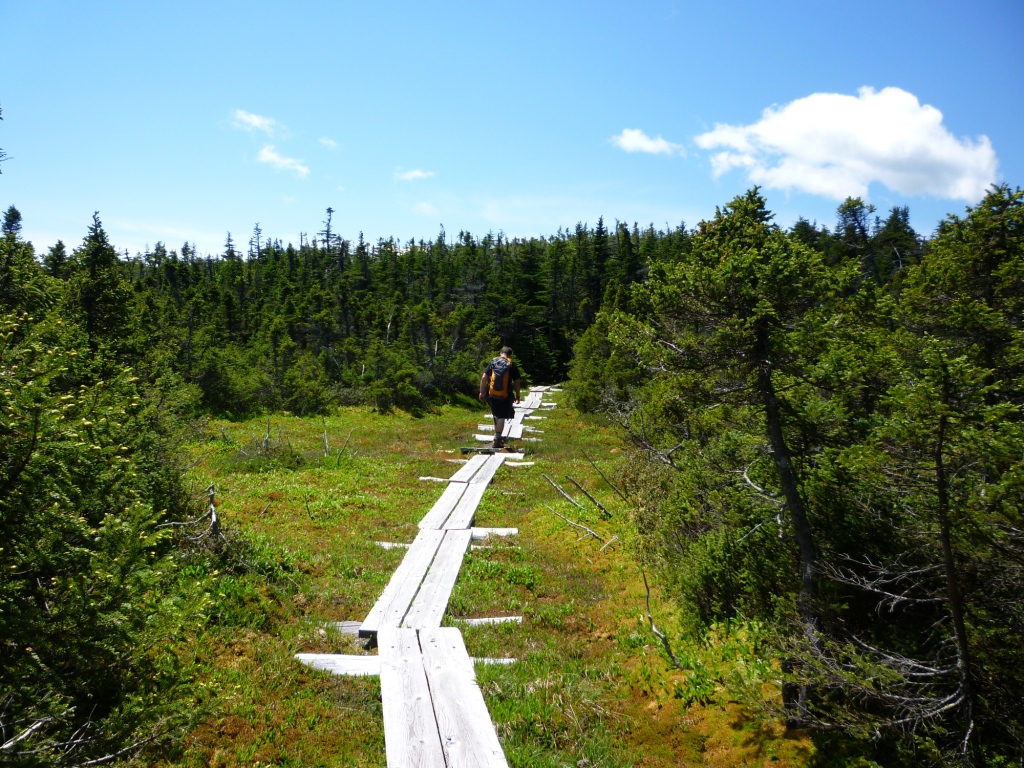 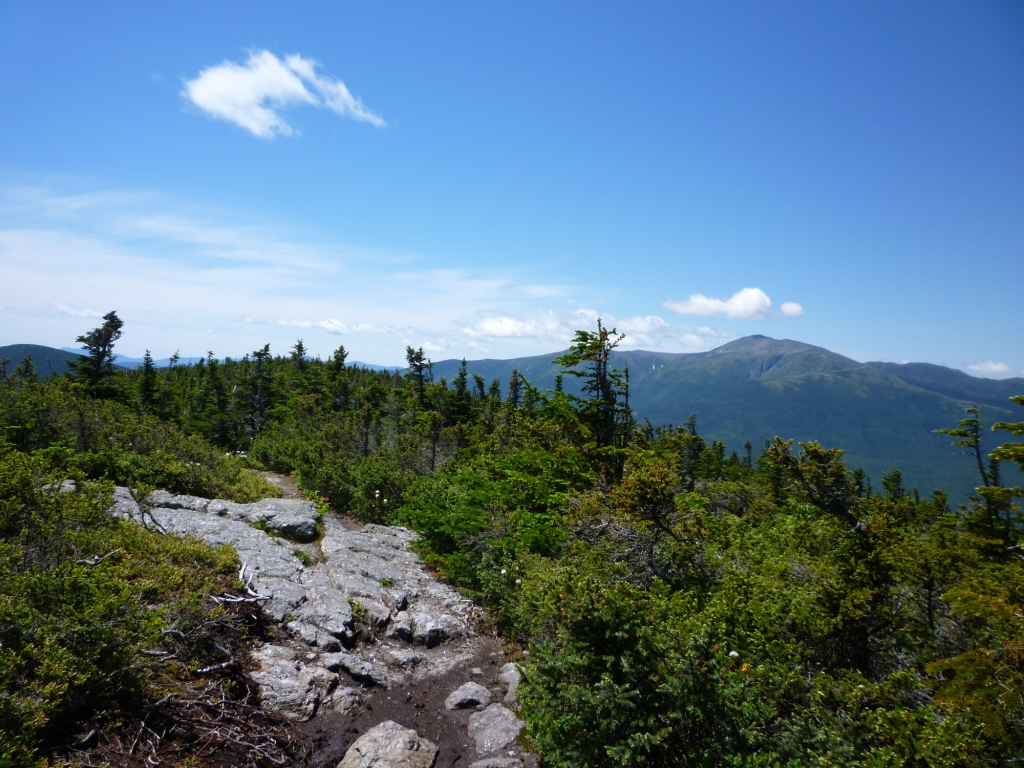 We went back to our packs and headed south on the Carter-Moriah Trail towards Middle Carter. The trail follows the ridge, with some nice plank walkways across swampy areas (left) and many areas of low scrub and ledge offering great views (right). Together with the view from North Carter this was the best part of the hike and indeed a very good reason to climb the Carters. 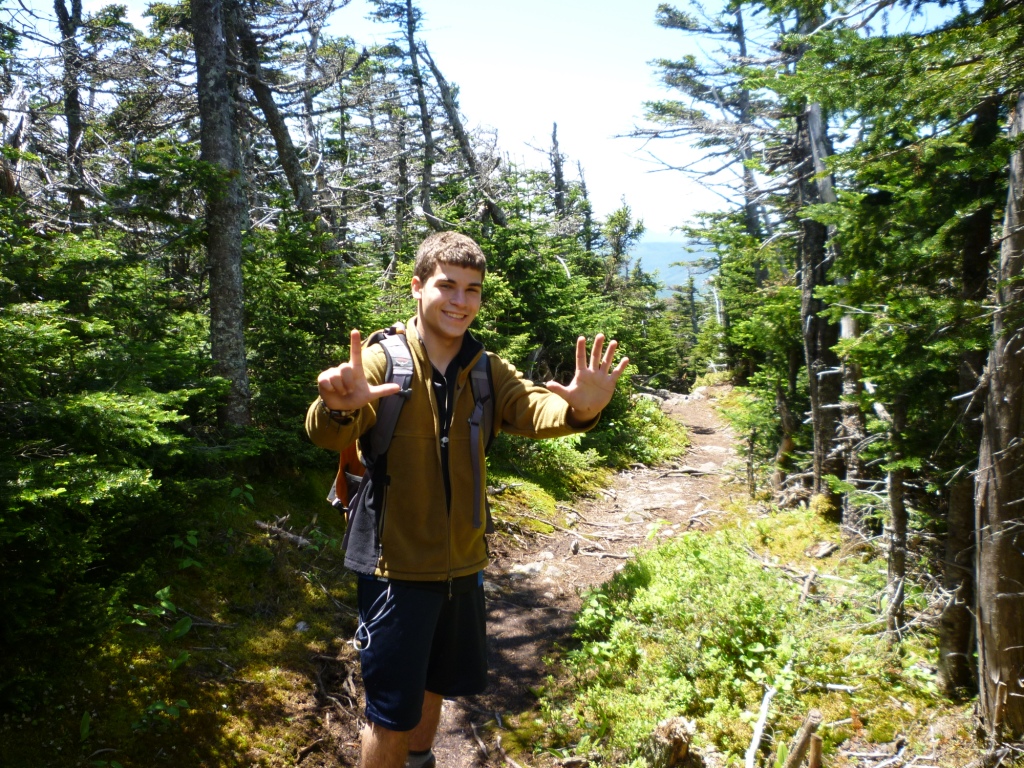 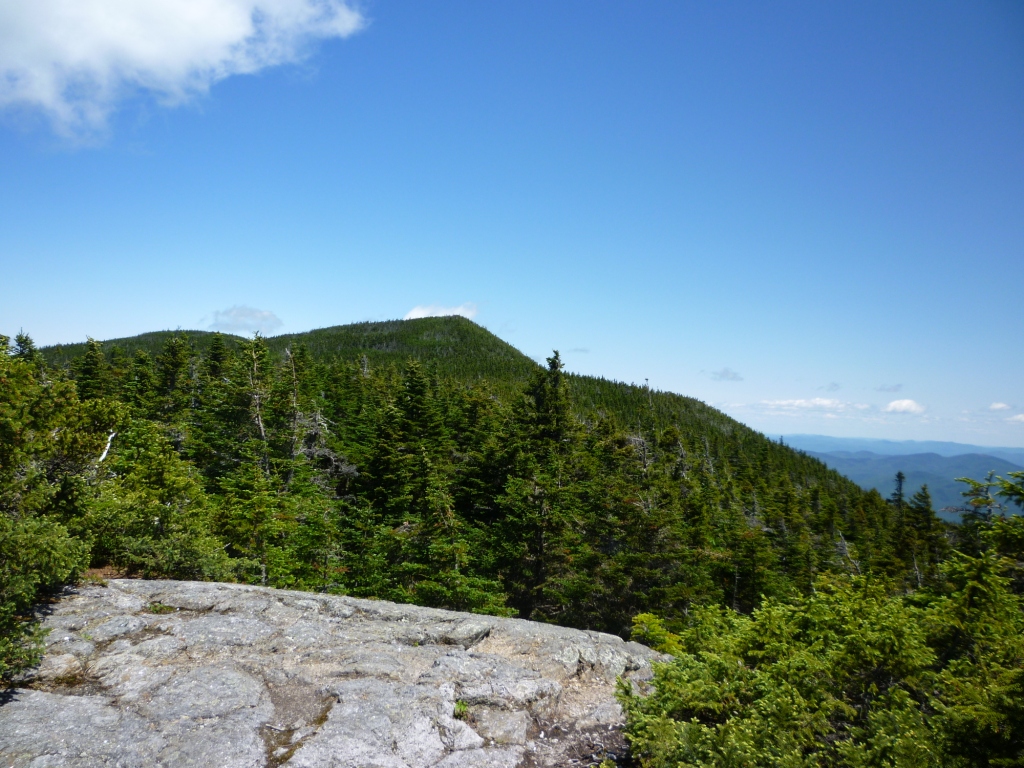 We eventually got to Middle Carter (4,670'), a narrow corridor of high scrub with no views (left). This was Alex's 41st 4,000 footer - seven to go. The guide said that the summit was marked by a rock pile but we didn't find any. Ironically, as soon as we left the summit we got back into the views - again, ledgy terrain with low scrub. We dropped to a pass (4.190') and then on to climb South Carter. We still had occasional views, including this look back to Middle Carter (right). 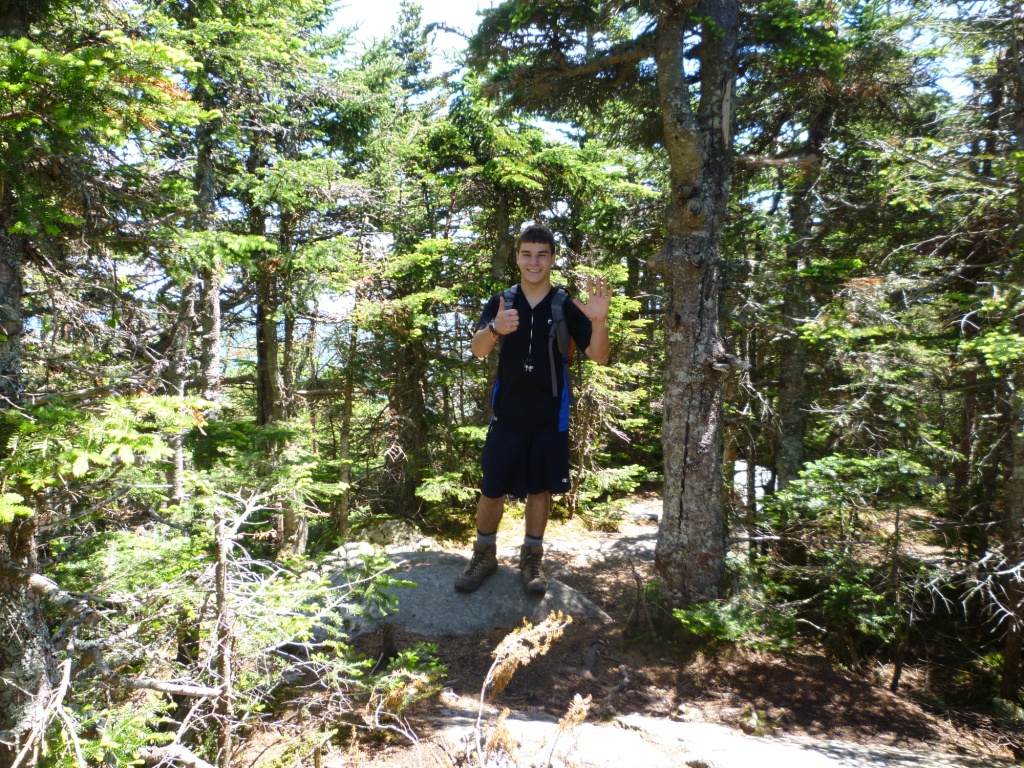 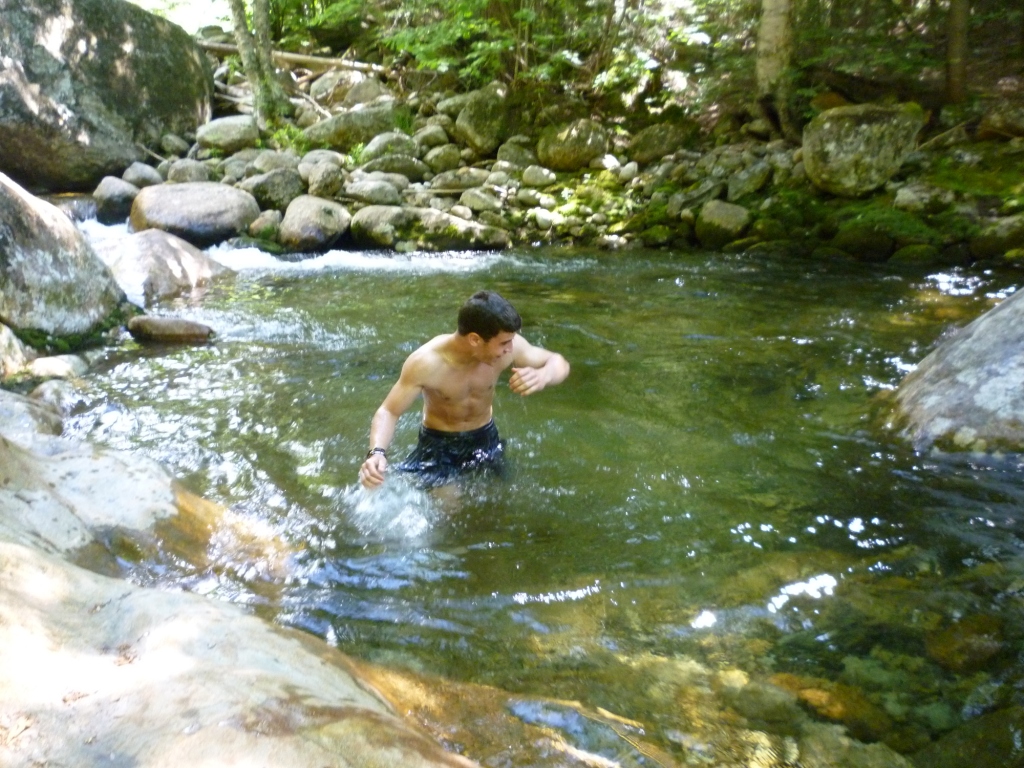 The final climb to South Carter is wooded and uneventful, and the peak itself (4,400') is totally uneventful - no view, a rock pile and a side trail to the true summit (left). Anyway, only six 4,000 footers to go for Alex! Going off South Carter we had some final views of Carter Dome and Mt. Hight, which we had climbed last year (see report of Aug 11, 2010 hike). After that it was back into the woods to reach the Carter Dome Trail and then down to 19-Mile Brook Trail which we followed to the trailhead. There was still a lot of water in the brook and shortly before reaching the trailhead we found a good swimming hole (right) but the water was cold! It was nice to take a dip though. From the trailhead we walked north 1.6 miles on Route 16 to get back to the car.