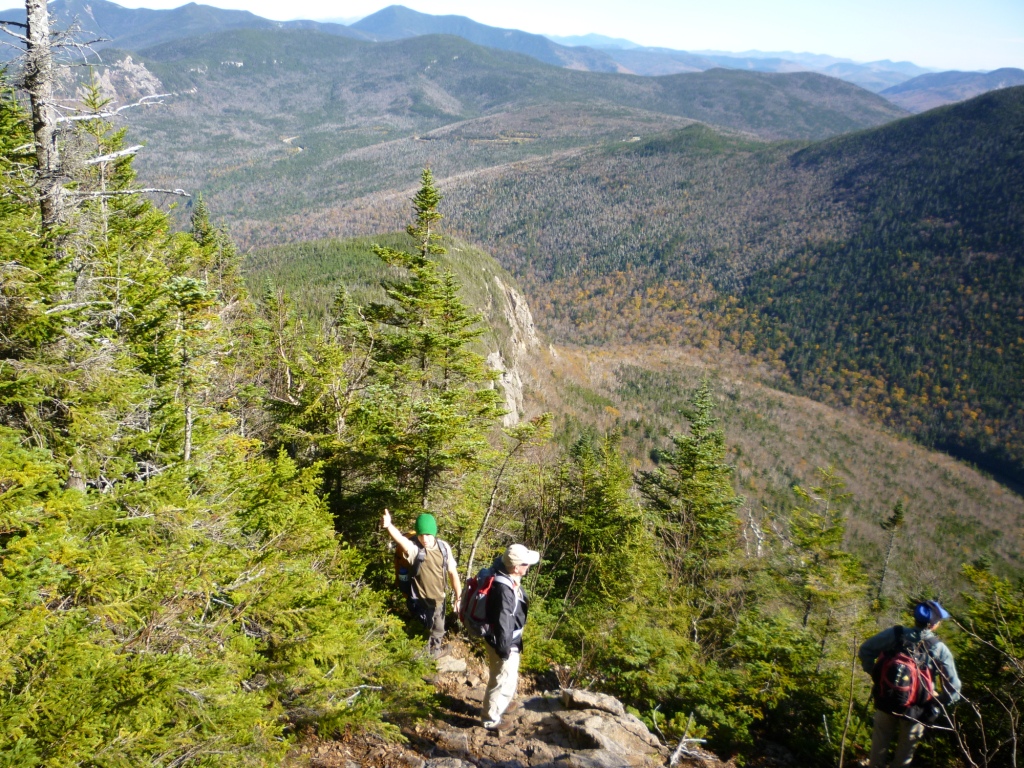 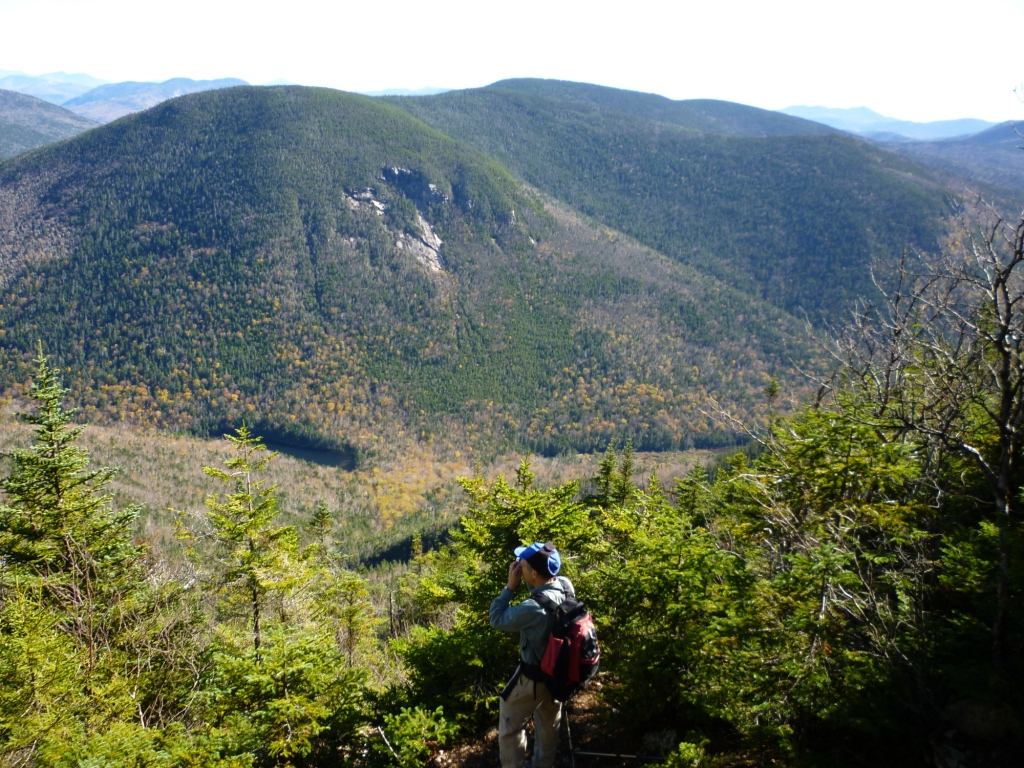 On that day Roger Gagne, Peter Wyatt, Alex and I set out to climb the two Osceolas (East Osceola and the main Osceola peak), starting from the Kacamangus Highway through Mad River Notch and up the Mt. Osceola Trail. How the Osceolas got their name from a Florida Indian chief remains shrouded in mystery. After a near-flat approach hike to the Greeley Ponds, we headed right on the Mt. Osceola Trail that soon became very steep (but never too rough) as it climbed East Osceola. Open ledges on the way up offered expansive views to the east (left) and down to the Greeley Ponds (right). By now most of the foliage was down on the ground and the views were more gray than green. What a difference a week makes! (See my North Moat Loop hike from the previous week). 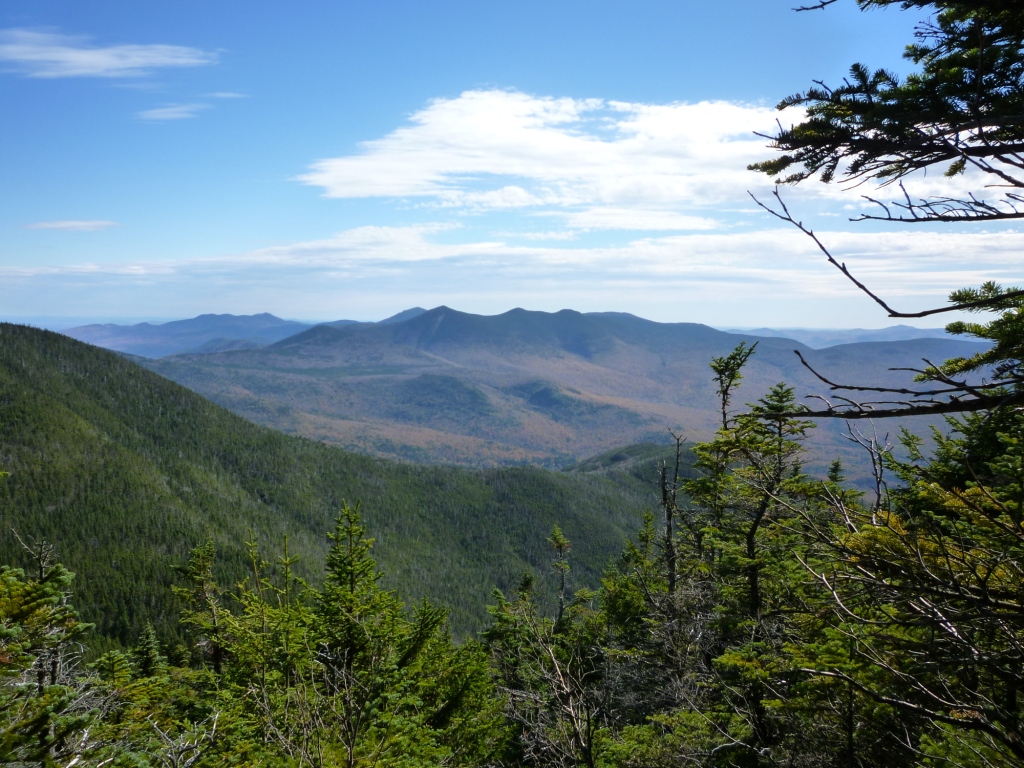 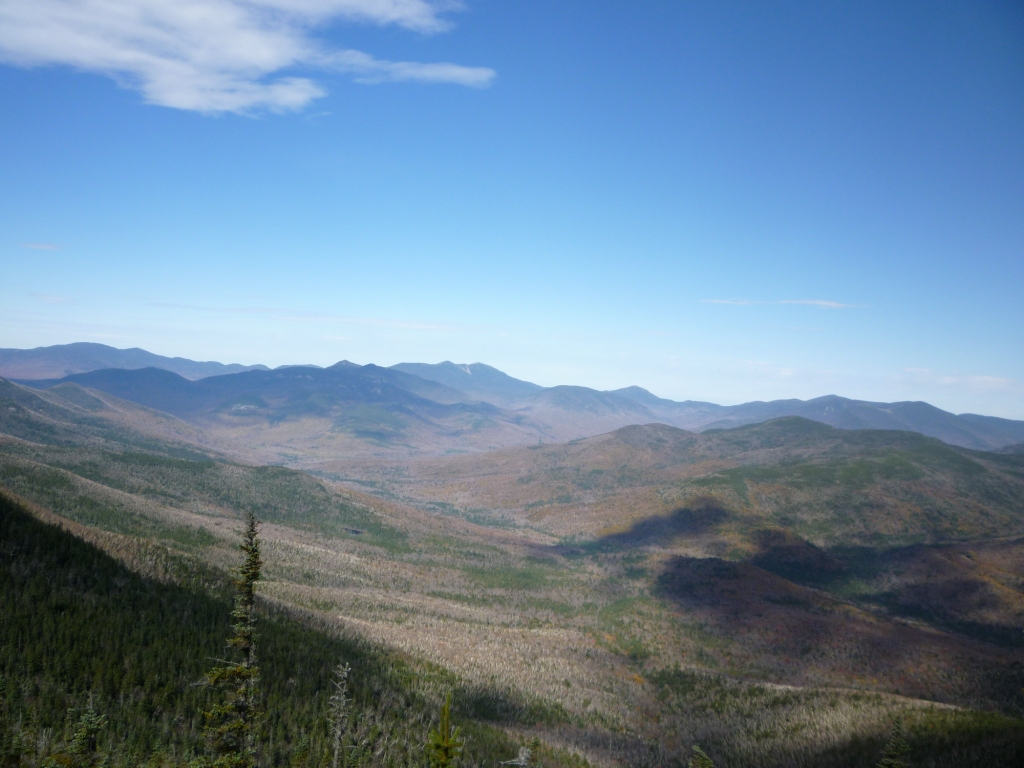 Continuing on the climb we reached a knob from which we had almost 360o views, looking out northwest towards the Bonds (left) and southwest to the Osceola ridge (right). Looking south we had a view of East Osceola that we were about to climb and the main Osceola peak to the right (below left). This is also the point where we started encountering ice on the trail, which had the advantage of freezing the mud and making passage easier in wet spots. 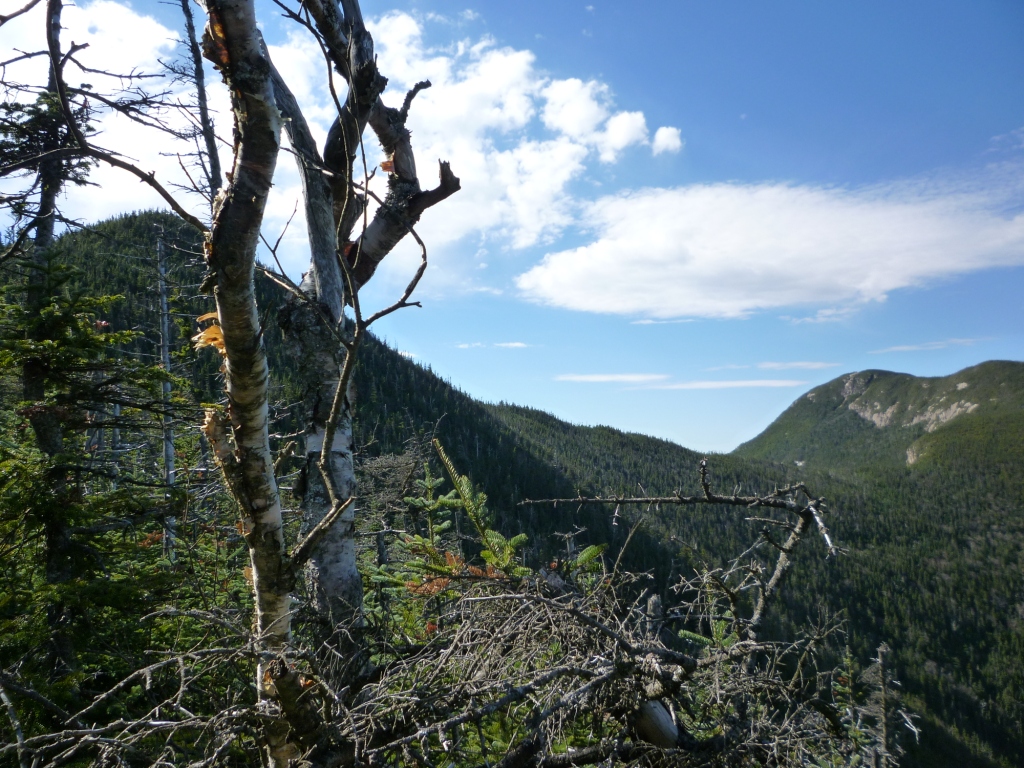 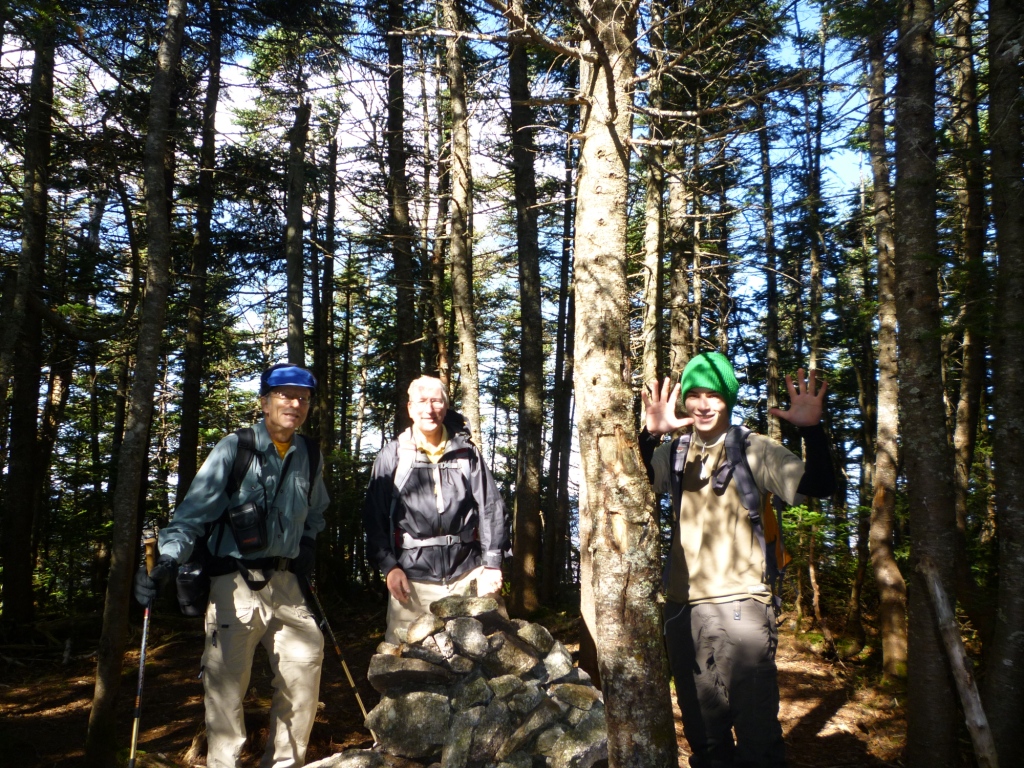 We eventually got to the top of East Osceola, marked by a big cairn and little else (right). It's described in the guidebook as "utterly coniferous" and there are indeed absolutely no views. But continuing a bit on the ridge there was an open ledgy view to the east toward the Tripyramids. with an attractive unofficial campsite from which to enjoy it. 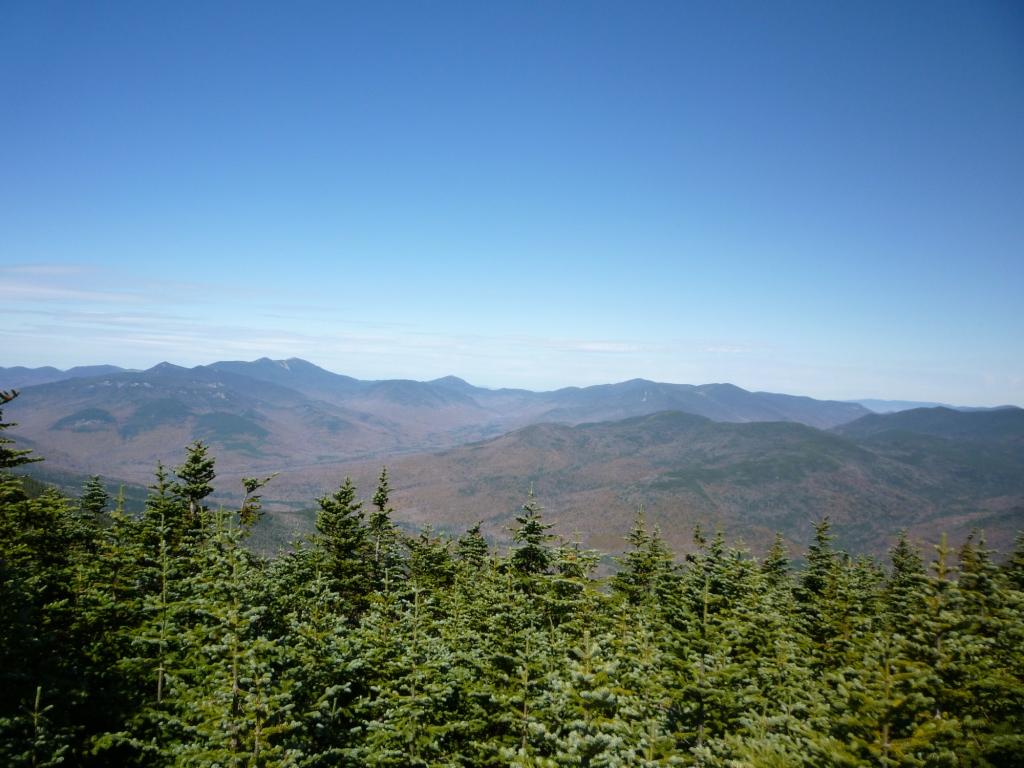 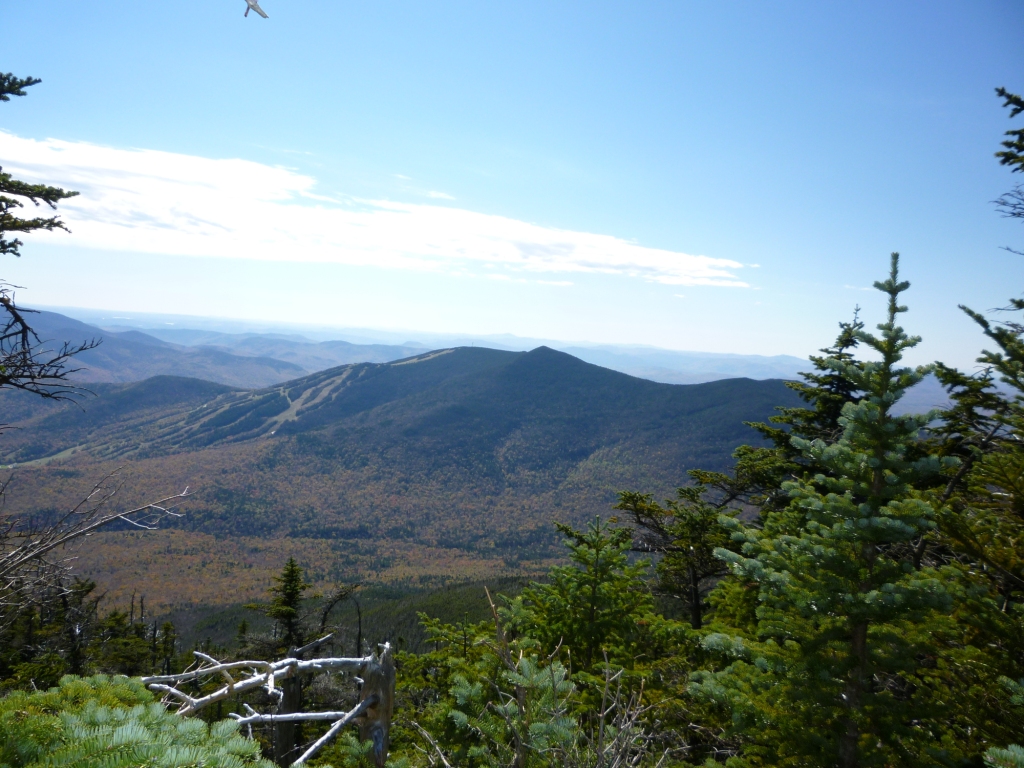 From there we dropped down to a col and back up to the main Osceola peak. This involved some fun hand scrambles but nothing difficult, and a series of occasional views. Finally we reached the top of Osceola, which has a grandiose view to the southeast (left). Whereas we had seen so far very few people on the trail, there was quite a crowd on top of Osceola who had come by the shorter trail from Tripoli Road. I had done that once with Oscar a long time ago, and I strongly recommend the longer trail from the Kac for the outstanding views. Short trails from the top of Osceola led to views in all directions, such as the one at right looking south to the Waterville ski Area. 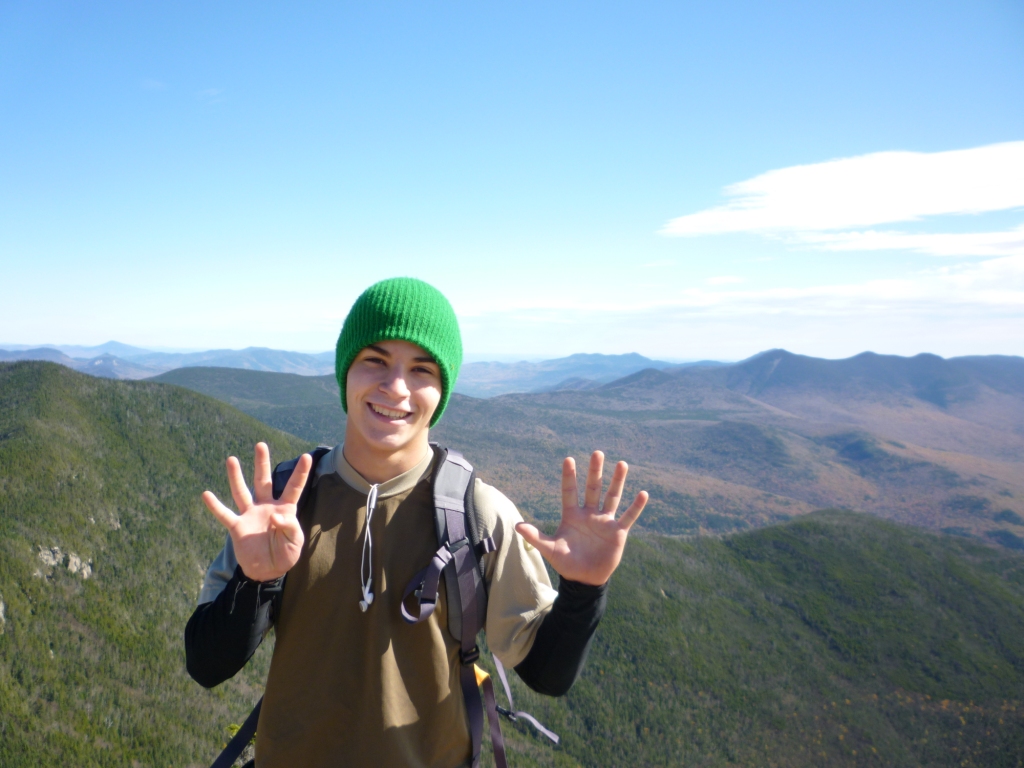 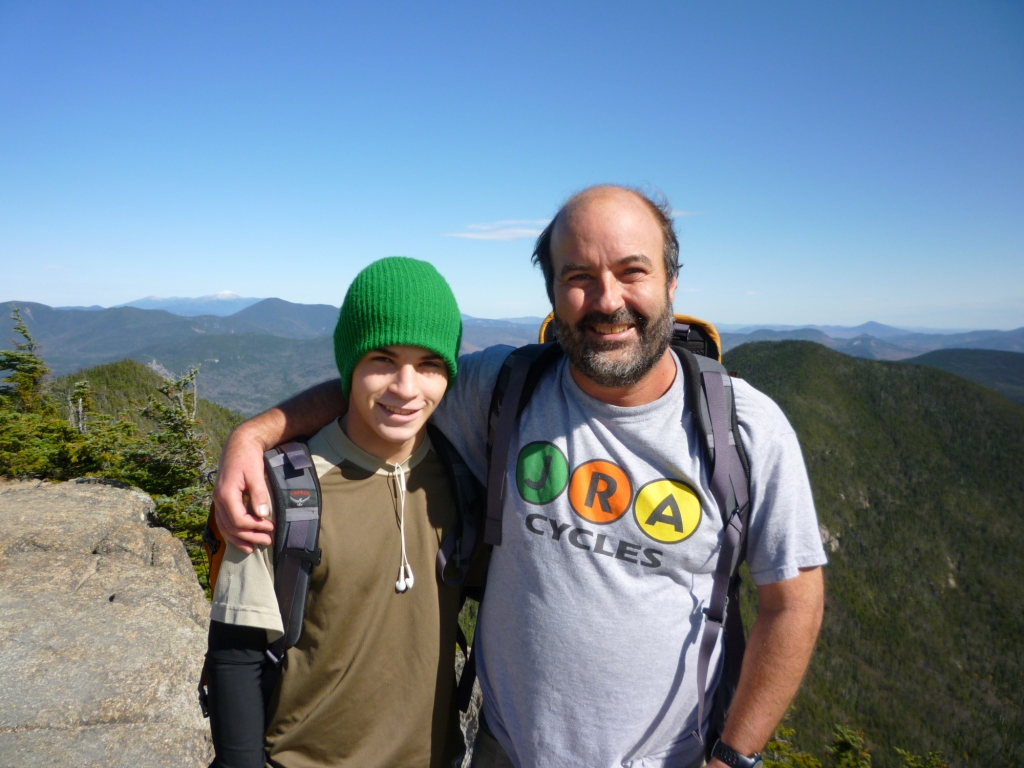 E. Osceola and Osceola were Alex's 38th and 39th 4,000 footers - just nine to go! (that's the nine for emphasis on the left). His quest to do all the NH 4,000 footers before his 18th birthday has been a wonderful father-and-son experience (right). We're now tied on the number of missing 4,000 footers but he'll finish before me because he's a man on a mission. We returned from Osceola the way we came. At the peak of East Osceola we met some folks who had come from Osceola to bag the two peaks but were disenchanted by the viewless experience. They asked if they could get views by hiking down a bit and I said yes just 2 minutes down, which was more like 10 minutes steep down and I felt guilty for it. And then we lost Roger at the intersection with the Greeley Ponds Trail but he finally emerged from the woods at the trailhead 1 hour later, together with Alex who had gone looking for him. The season is closing in, but I still hope for a few more good hikes before we're buried in snow!