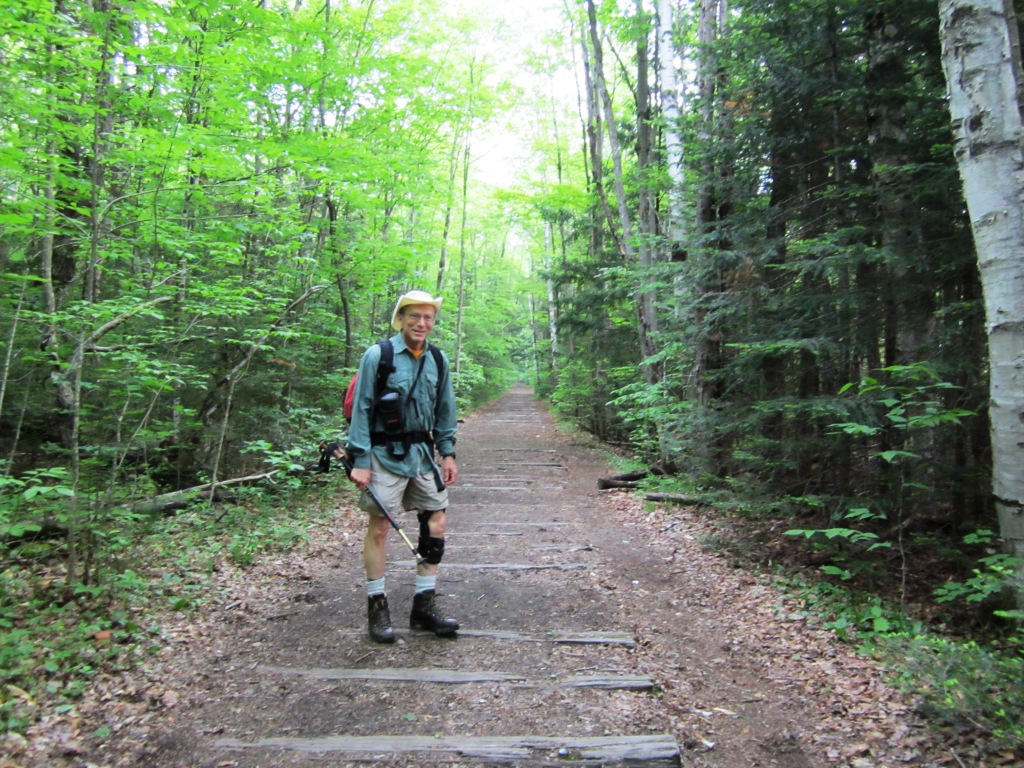 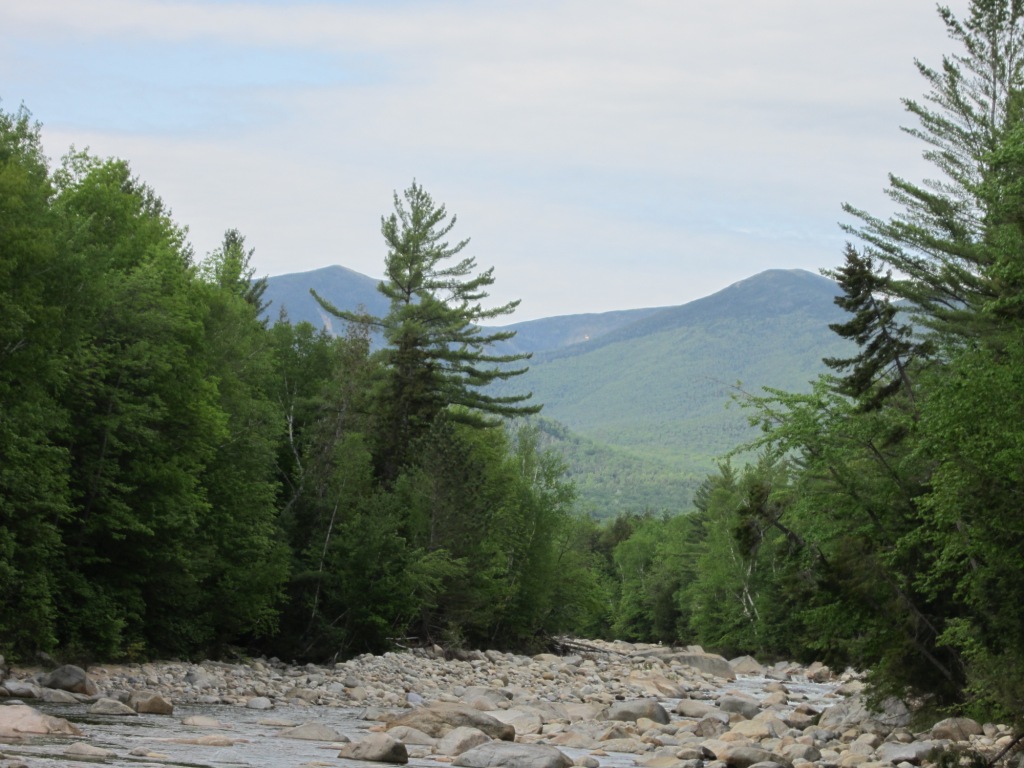 I only had two mountains left to climb to complete the 48 four-thousand footers of New Hampshire. One of them was Owl's Head (4,025') - reputed as a long slog to a trailless peak with no views. That didn't seem like a good way to celebrate completion of the four-thousand footers so I had to get it out of the way. I was thrilled to be joined by Peter Wyatt, who had climbed it before. The route to Owl's Head involves an 8-mile flat approach into the Pemigewasset Wilderness from the south, starting from the Franconia Brook Trail. The first three miles to the Franconia Falls junction are an extremely boring (but fast) straight hike on an old logging railroad bed along the Pemi river (left). At one point there was a good outlook from the river to the Bonds (right). 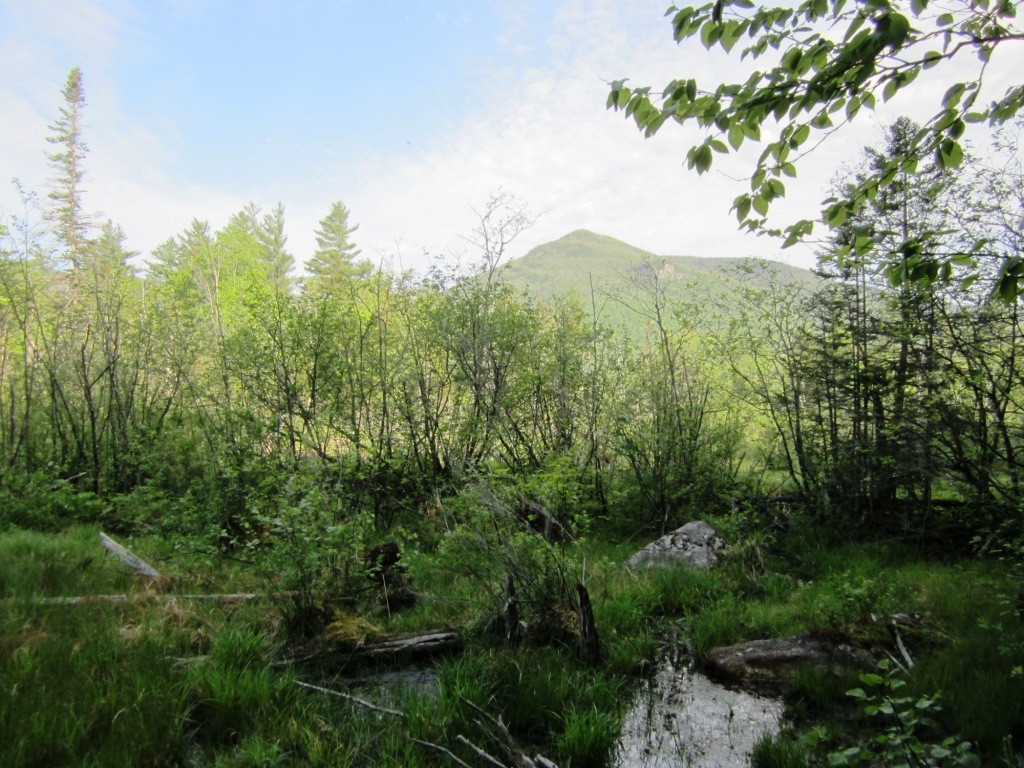 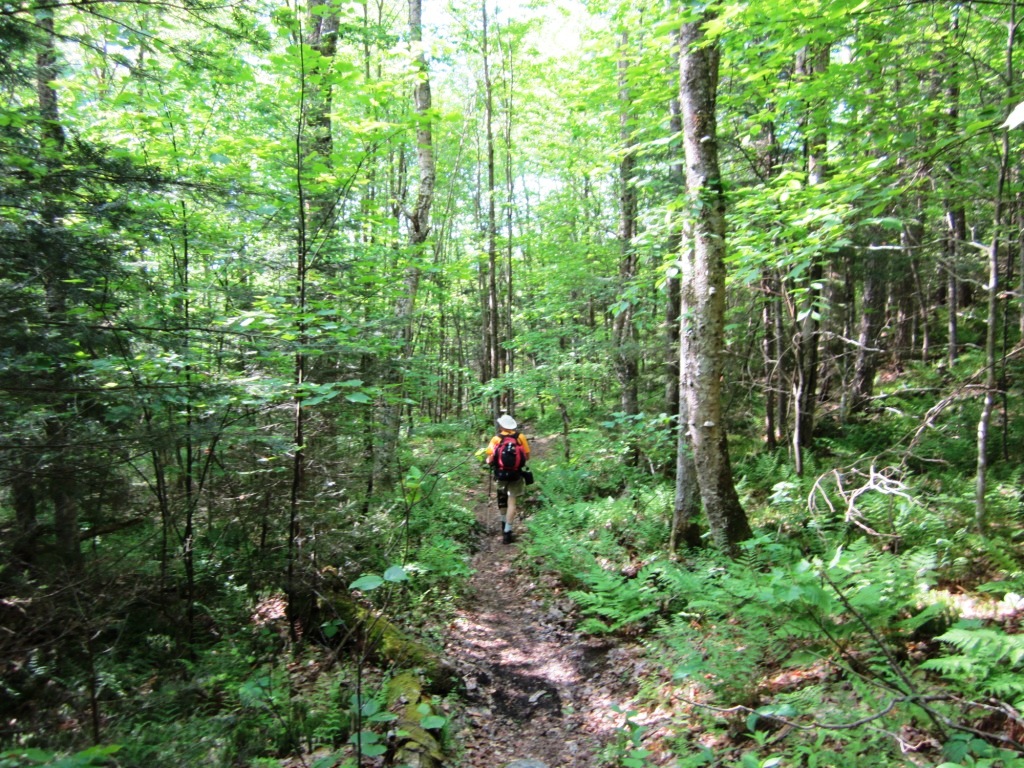 At the Franconia Falls junction we continued on the Franconia Brook Trail, which narrowed to a footpath and became far more interesting as it wound its way through a mature birch forest (right). A swampy area to the left of the trail offered a good view of Owl's Head to the north (left). 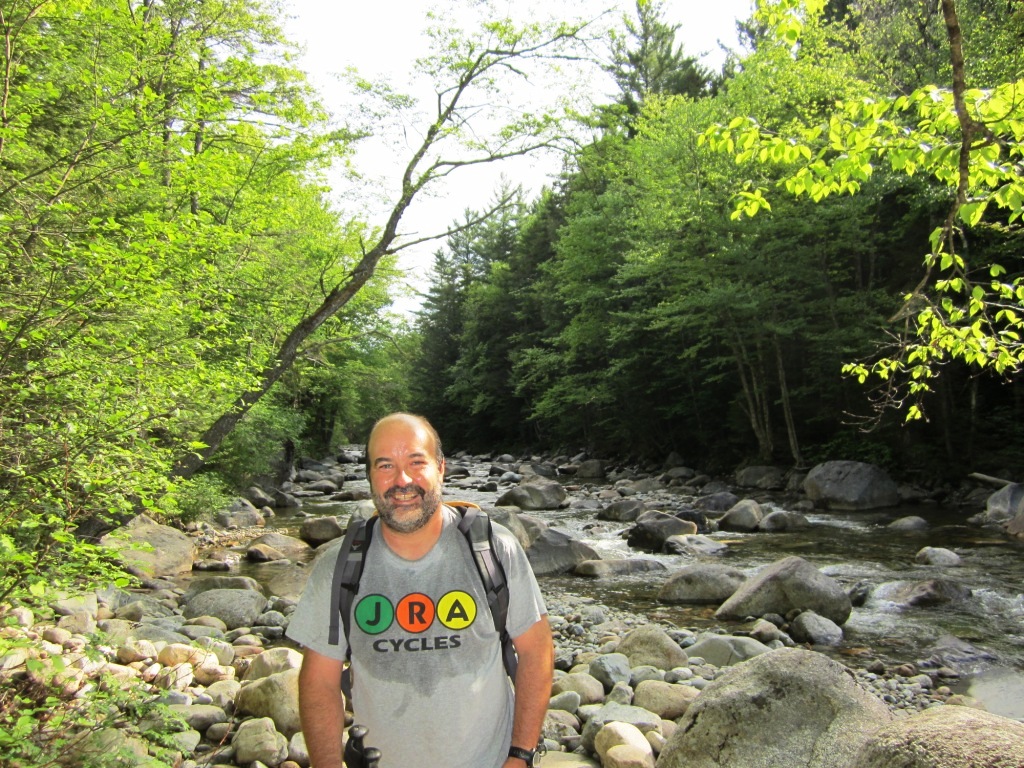 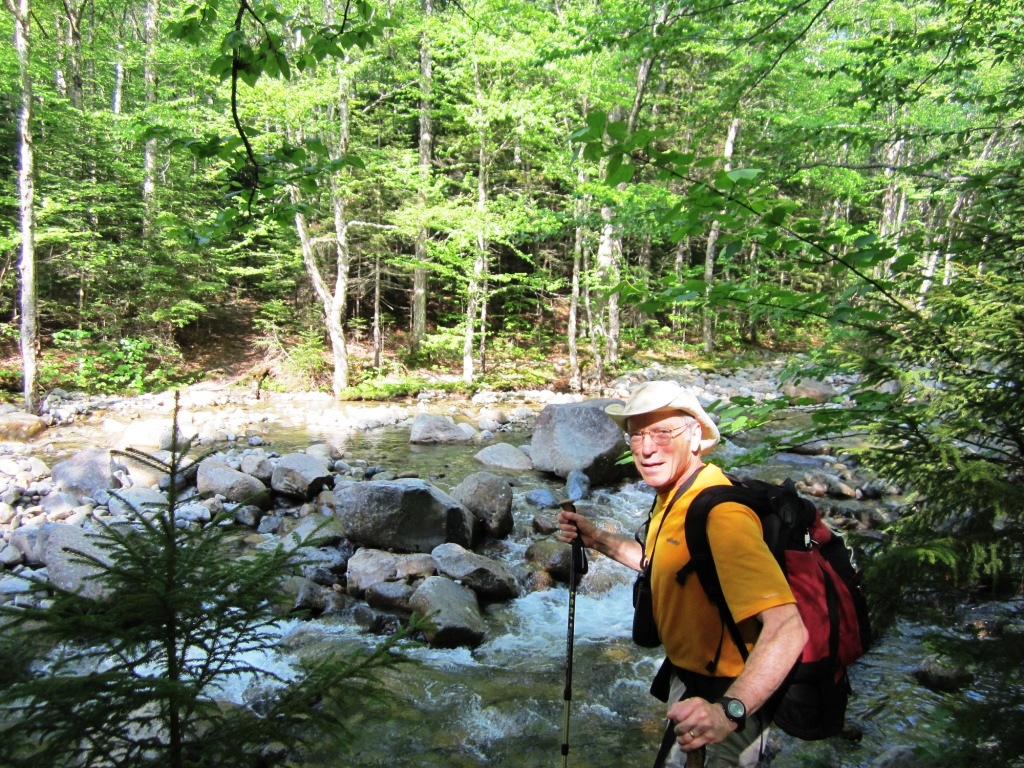 We soon reached the Lincoln Woods Trail, which took us west around the southern base of Owl's Head. This involved two major stream crossings, Franconia Brook (left) and Lincoln Brook (right). For the Franconia Brook crossing we wandered some distance downstream and found a place where we could step and jump from stone to stone. For the Lincoln Brook crossing we had no such luck, so we put on our sandals and got our feet wet. My sandals have a good hiking tread and since there were two more significant stream crossings until the base of Owl's Head I decided to keep them on and see how it felt. They made going through mud easier but in rocky areas the open toe was a distinct disadvantage. 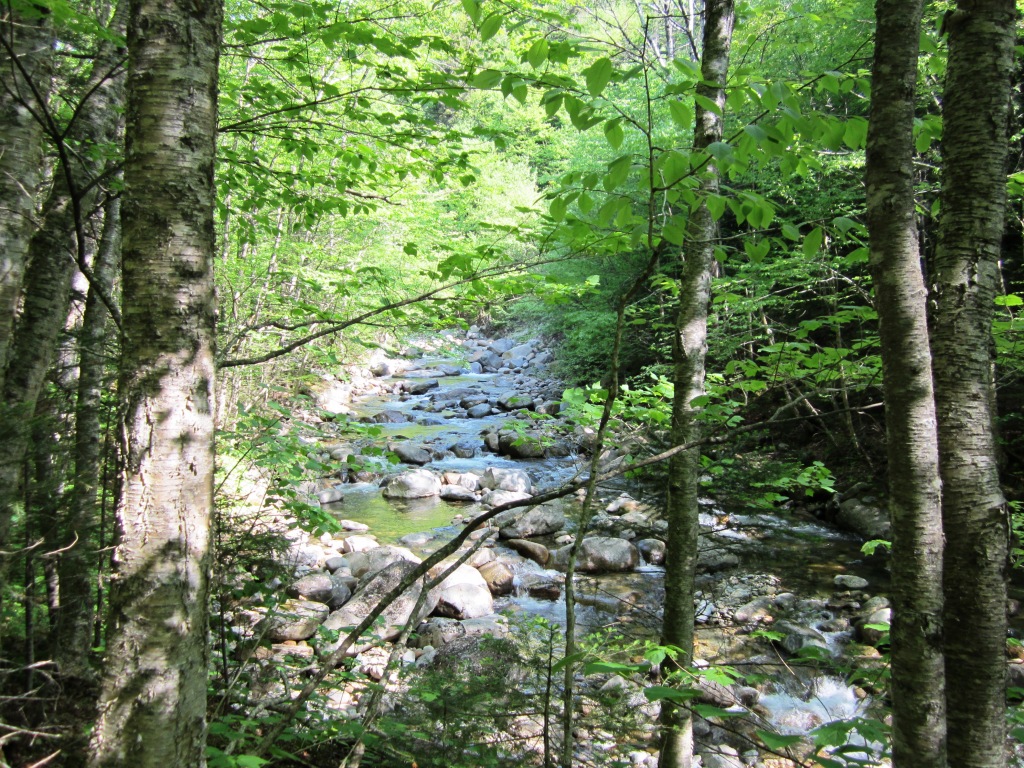 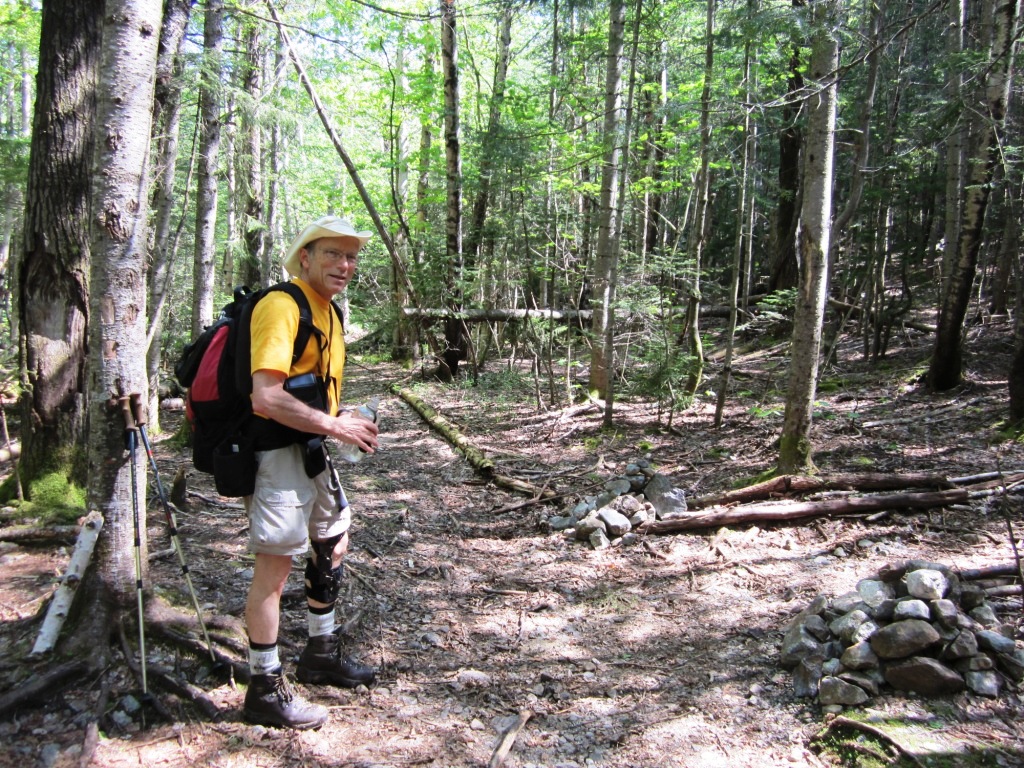 On we went following Lincoln Brook upstream as it curved around the base of Owl's Head. It was thoroughly enjoyable streamside walking (left). After the two last stream crossings I put my boots back on. The unsigned trail to Owl's Head was half a mile ahead according to the guide. I was excited - what would the trail junction look like? Story is that hikers keep putting markers and the Forest Service dismantles them, so we didn't know what to expect. Finally we whooped as we recognized the entrance to Owl's Head trail, with no sign but two prominent cairns (right). 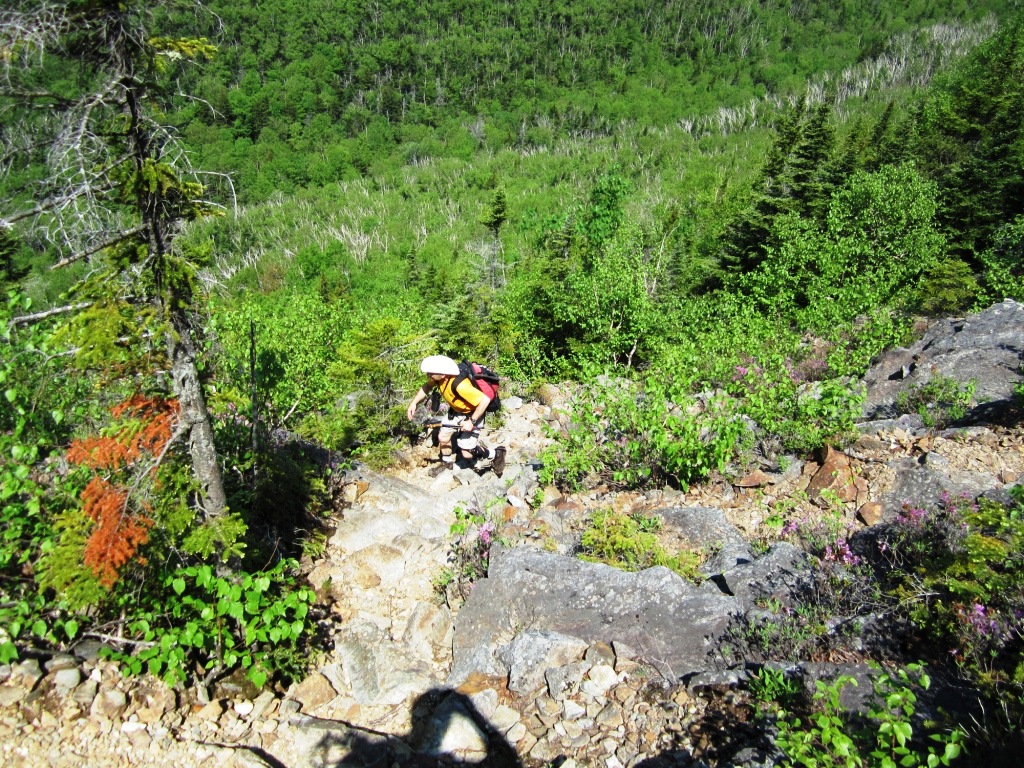 At that point I set my altimeter to guide us through the climb. The base of the trail was 2,560', so we had climbed some distance from the 1,100' trailhead but hardly felt it - it was spread over 8 miles! I didn't know what to expect for the climb - a bushwhack, a herd path, or an actual trail? It turns out that it is an actual trail, and if anything better signed than the Lincoln Brook/Franconia Brook trails - there are regular small cairns, whereas the official trails have no blazes or markings of any kind since they are in a designated wilderness. It is a no-nonsense White Mountains trail - straight up and rough, with no wimpy switchbacks. Soon after we reached the base of Owl's Head Slide. From there until 3,200' climbing was in the open through a lot of loose rock (left) but with a beautiful carpet of rhododendrons in bloom (right). The climb isn't that steep - not as steep for example as the Flume Slide. I suspect that under wet conditions it could get tricky. 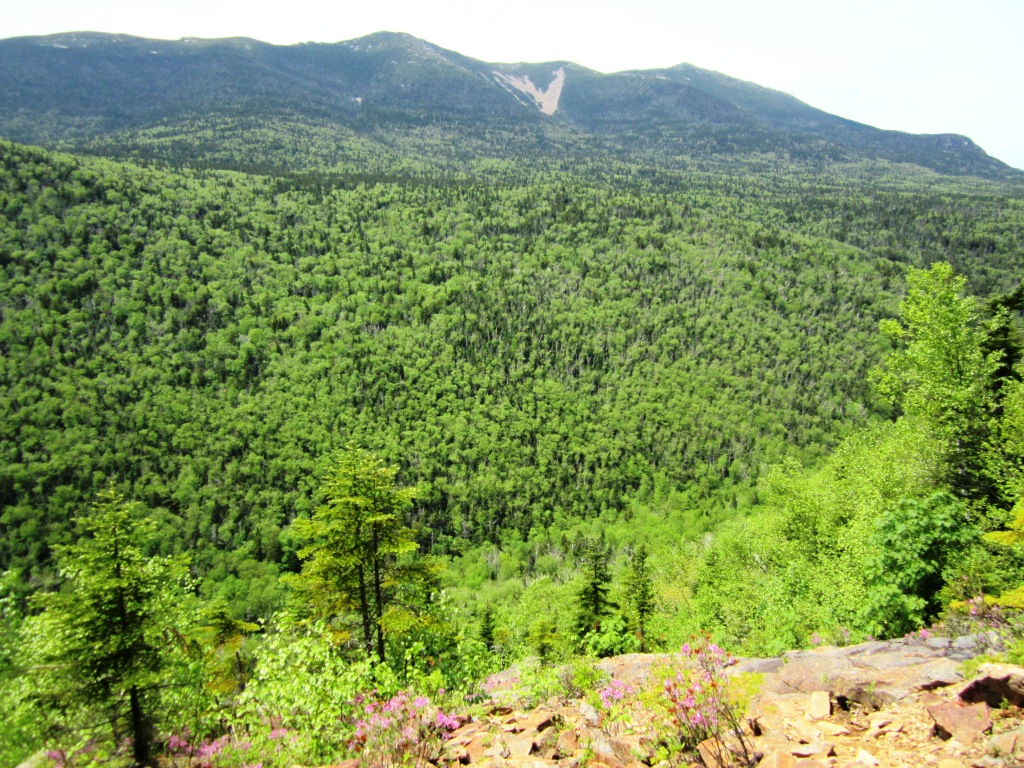 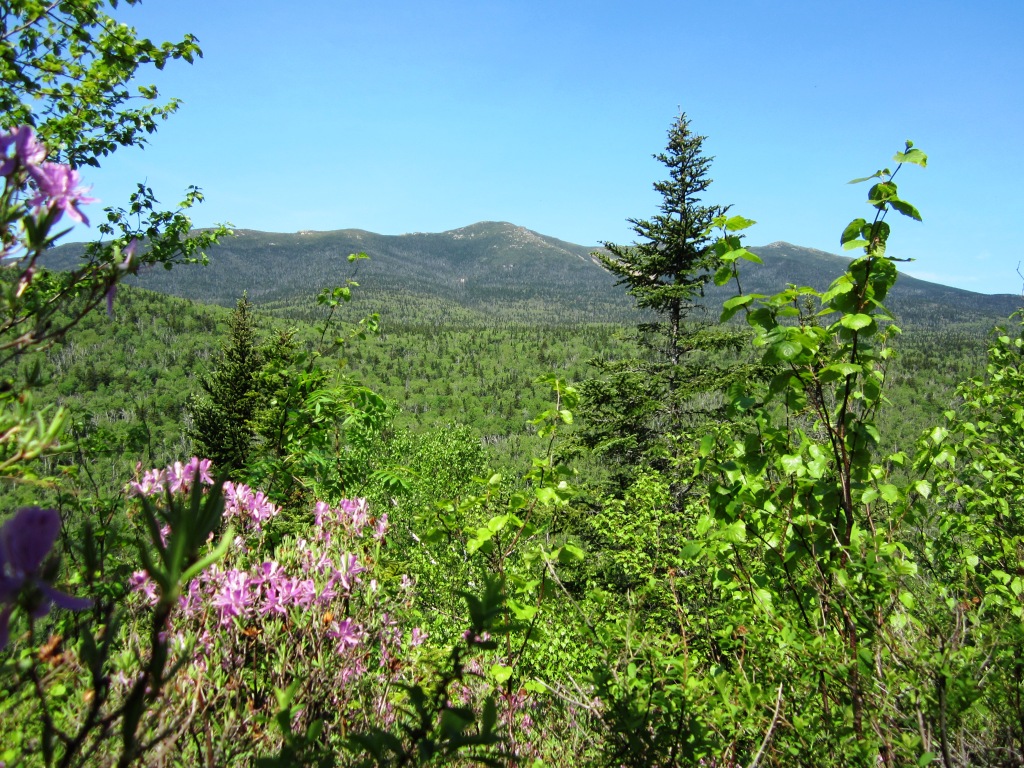 But most remarkable were the VIEWS. Who said Owl's Head doesn't have views? The views from the slide are phenomenal. The centerpiece is the view of the east side of Franconia Ridge (left), which you really can't get from anywhere else. The large slide down Mt. Lincoln is a prominent feature. The rhododendrons in the foreground added to the visual appeal, as shown by the picture at right. 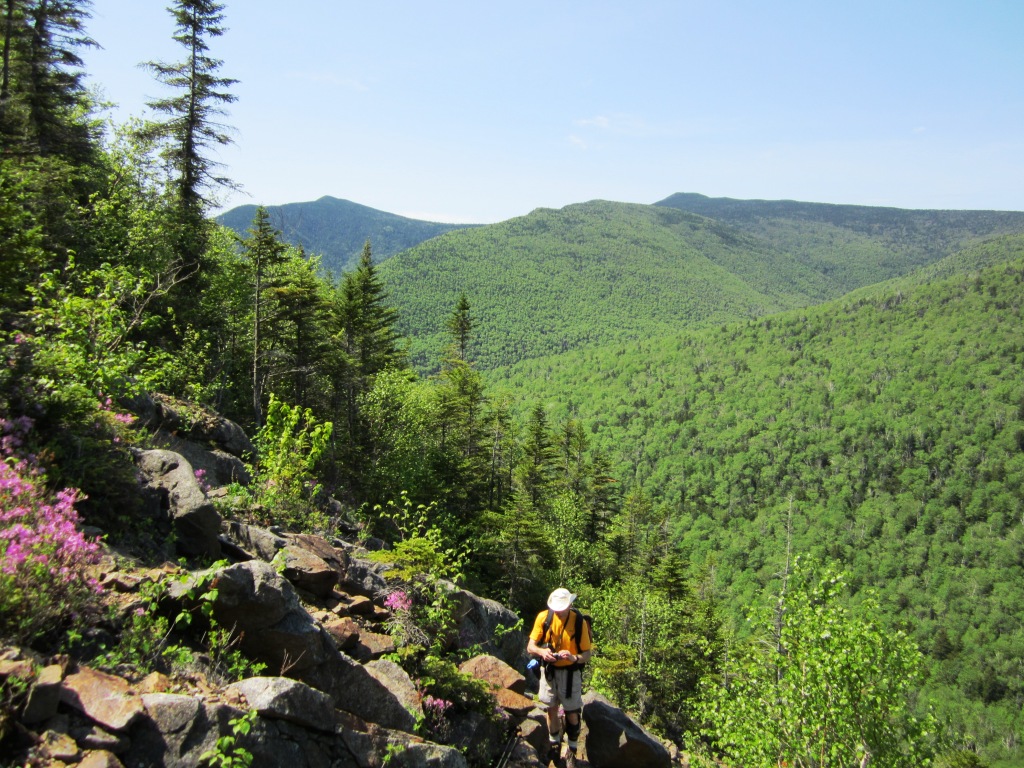 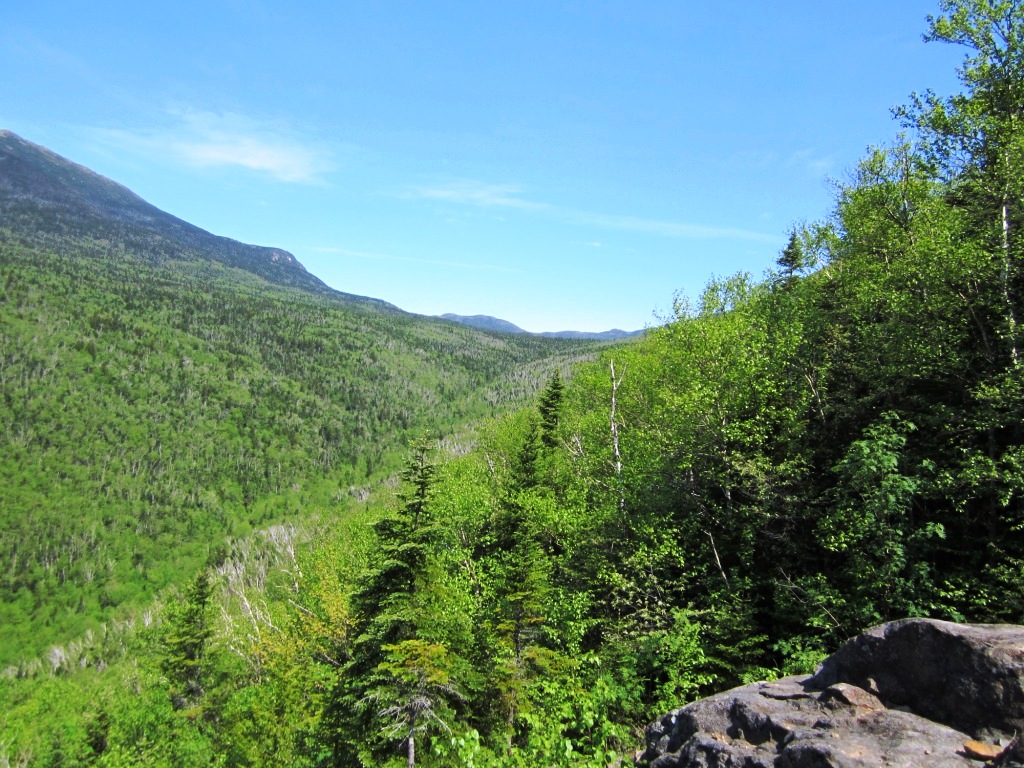 The view stretched 180 degrees over the east. To the south were Mts. Flume and Liberty (left). To the right was Mt. Garfield and the Twins (right). The unique views from Owl's Head Slide make the whole trip well worth it. Of course, it helps to have low expectations. At 3,200' we reached the top of the slide and re-entered the woods for a continued steep climb. The trail remained pretty obvious but with a lot of blowdowns. The spruce forest was thick on both sides and we appreciated not having to bushwhack. Peter and I had bushwhacked Mt. Deception earlier in the month and had found moose tracks everywhere, but here surprisingly we did not see a single moose poop. Not that the moose don't come here - when my son Alex climbed Owl's Head two years ago he told me that there was a decaying moose carcass on the slide that added an olfactory experience to the visual one. 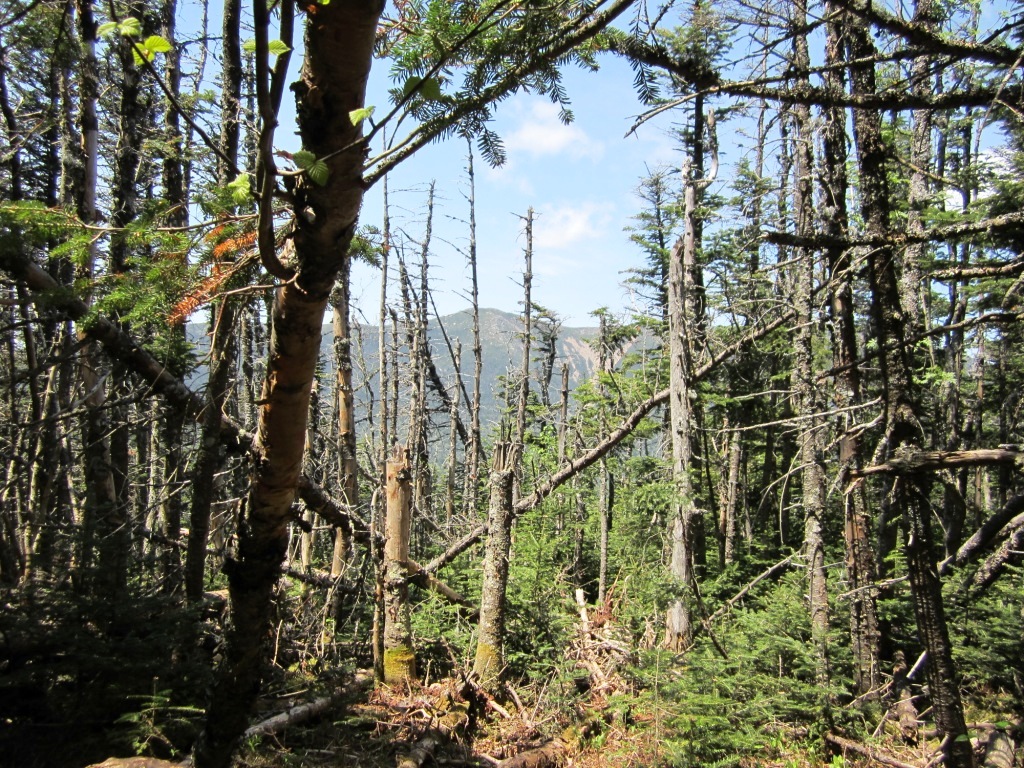 We finally got to the top of Owl's Head ridge and my altimeter recorded 3,950'. The trail swung left along the ridge and soon after reached the "old summit" at 4,010'. Remarkably this was thought to be the actual summit until 2005, when hikers discovered that a point 0.25 miles further north was actually higher. I'm extremely pleased that there are still little things to discover like this. The old summit now has a sign (left) directing you to the true summit. At that point the trail became much harder to follow, since generations of hikers had yet to mark the way, but there were segments of herd paths here and there, and no way to get lost since you had to stay on the ridge. The views were admittedly very limited but there were occasional glimpses of the Bonds to the east (right). 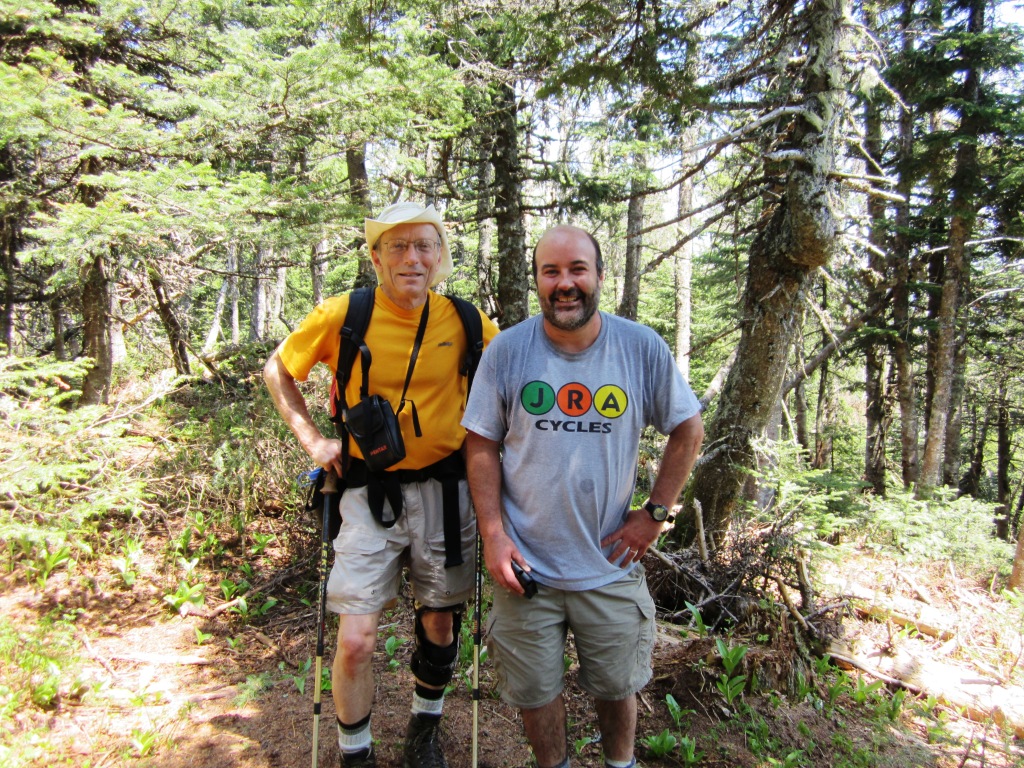 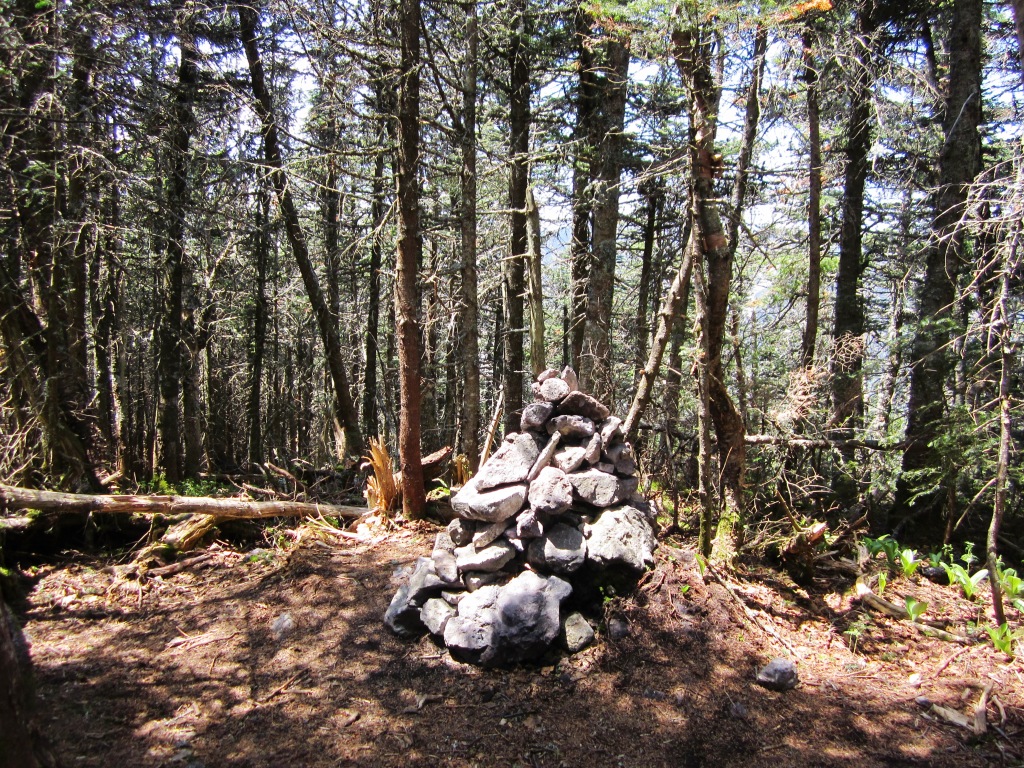 We eventually got to the summit, marked by a cairn (right). There was another group there collecting their 4,000 footers and they took our picture (left). We reflected that a good wildfire on Owl's Head would do wonders by creating a phenomenal and unique view surrounded by tall mountains on all sides. I've had similar thoughts on other mountaintops like Mt. Hale or the Hancocks. 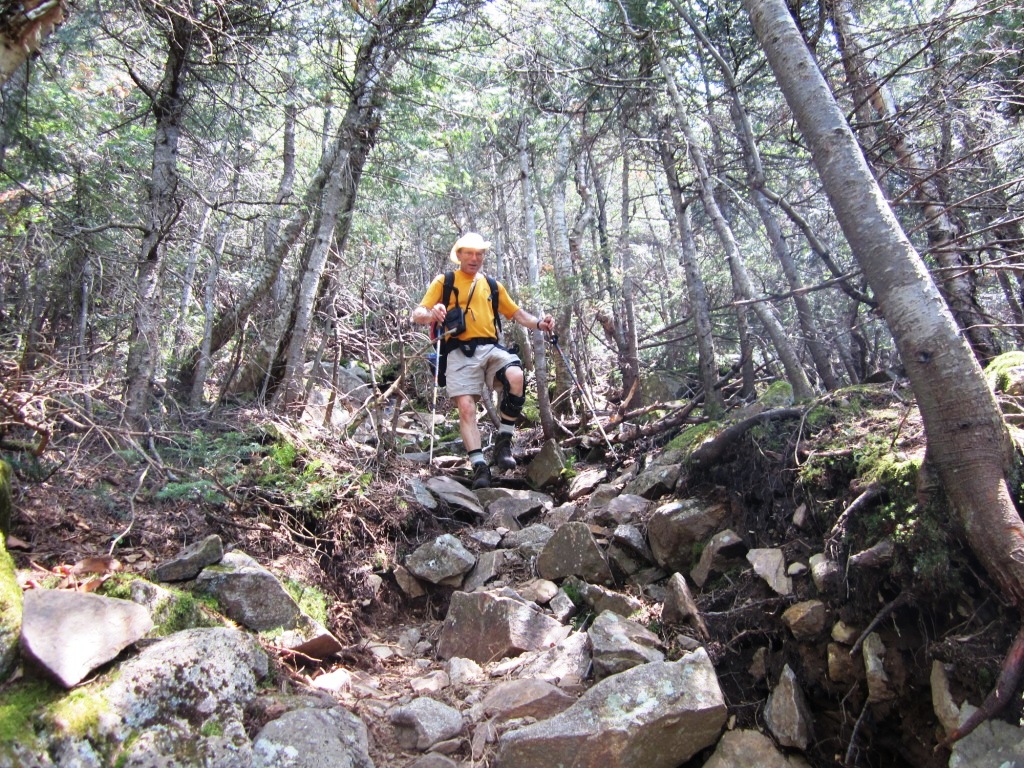 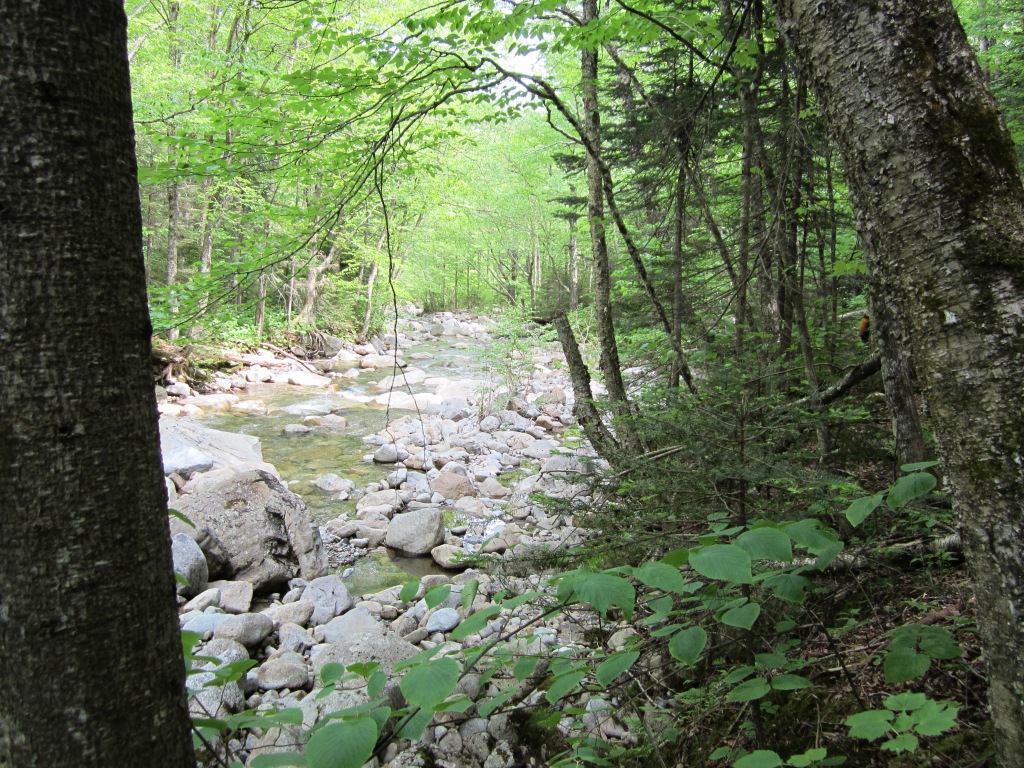 From there we went down the way we came. Steep trails always look steeper on the way down (left). We enjoyed the views from the slide again, and from there it was down to the base and back on the very enjoyable Lincoln Brook Trail. When we got to the Lincoln Brook crossing (right), we decided not to cross but to bushwhack instead along the brook for 1.5 miles to Franconia Falls. The trail guide said that there was a herd path but that really wasn't true. We had to pick our way through blowdowns, thickets, swamps, and stream channels, and semblances of trail that took us to impenetrable spots. 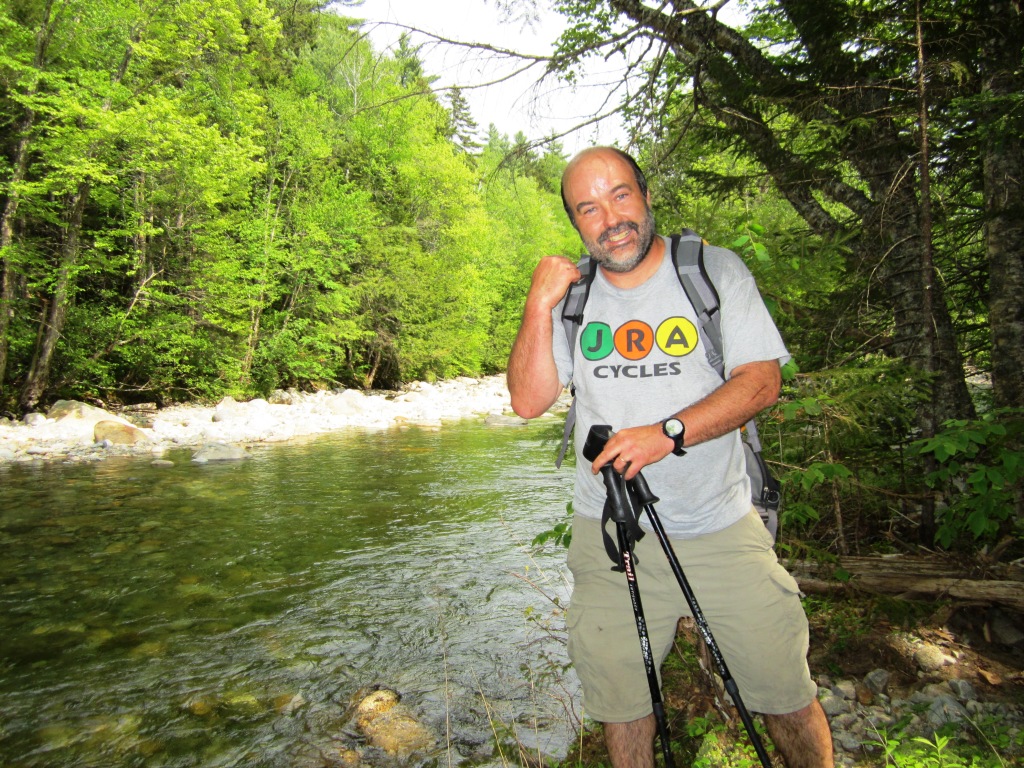 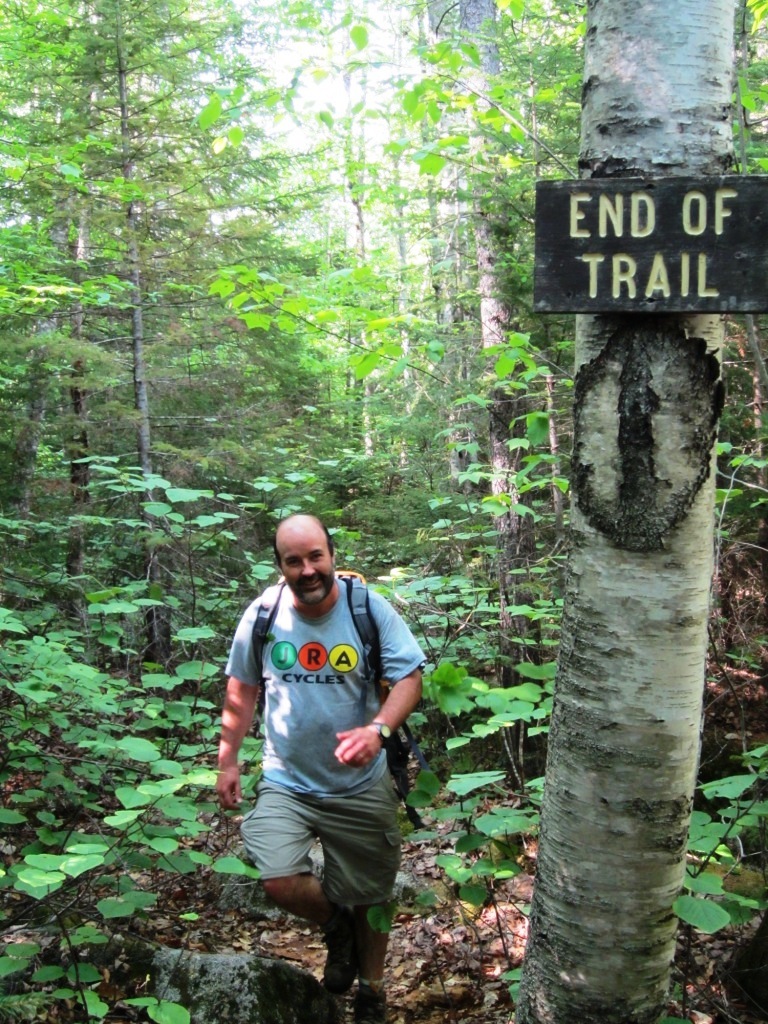 Finally we figured that the best thing to do was to just stay close to the stream (left). The trail became more and more distinct, and I smelled a campfire. I felt like Shackleton trekking through South Georgia Island and suddenly hearing the whistle from the whaling station. We passed the End of Trail sign at the top of Franconia Falls (right) and ran into a large group enjoying the water and the sunshine. They asked us where we were coming from - "isn't this supposed to be the end of the trail?". 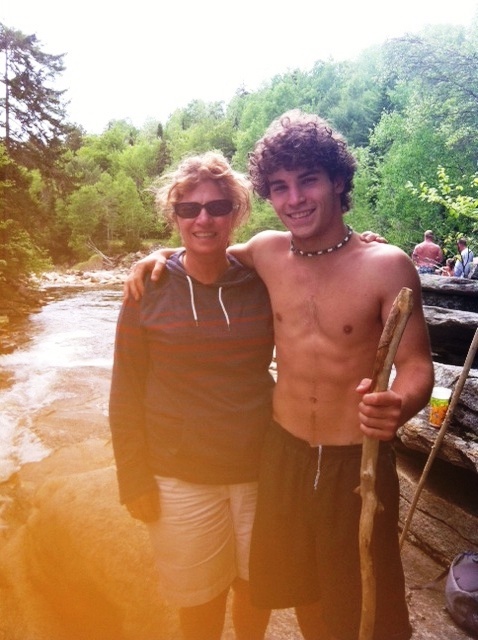 I had never been to Franconia Falls before. It is a beautiful and understandably very popular place. I had imagined a great waterfall, but it is rather a succession of pools with swift water and toboggans and smooth ledges. The different pools hosted happy folks spread on the ledges and egging each other to jump in the cold water. I took a very cold dip (left), after which we walked back the remaining three miles on the railroad bed. On that same day Alex was camping along Lower Falls in Bretton Woods with his girlfriend Becky and got a visit from mom (right). This has nothing to do with my Owl's Head hike but it's a good picture of them. Notice that Alex inherited my abs.

So I now have just one four-thousand footer to go to complete the 48. I could actually see it at one point on today's hike. Stay tuned!