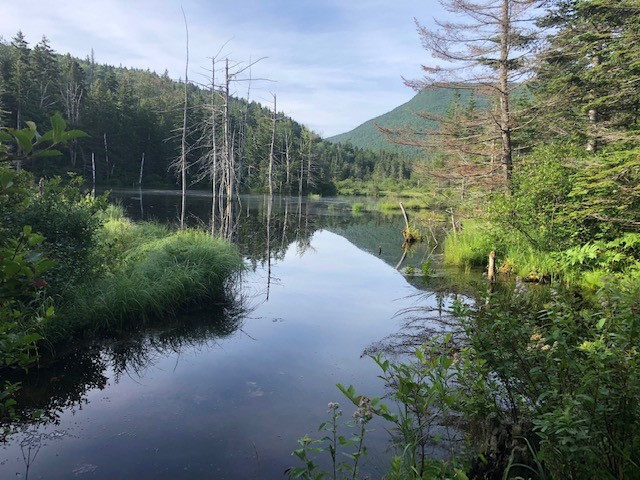 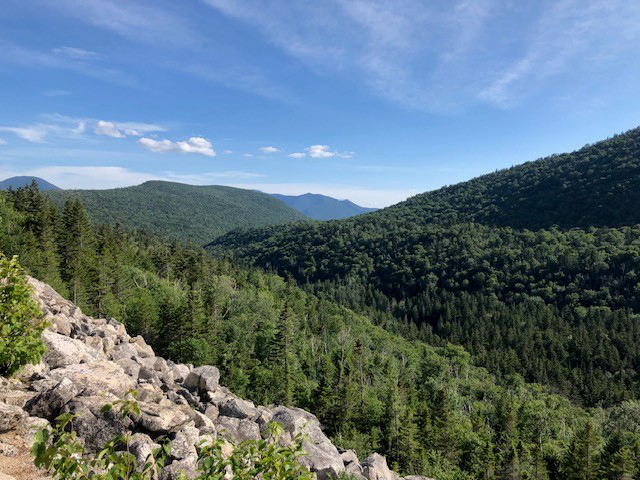 This was a long (21 miles) trek through the Pemigewasset wilderness, following the rivers and around an unnamed mountain range. At some point on the Thoreau Falls Trail we were further away from a road than anywhere in the White Mountain National Forest. We started up the Zealand Trail, which soon opens to beautiful pond views (left) and continued on the Ethan Pond Trail to Thoreau Falls. On the way is a massive slide that gives great views up and down the valley, and which is the starting point for a Whitewall bushwhack or a Zeacliff loop. But today the most interesting feature was the unnamed mountain range in front of us that we would be circling (right). 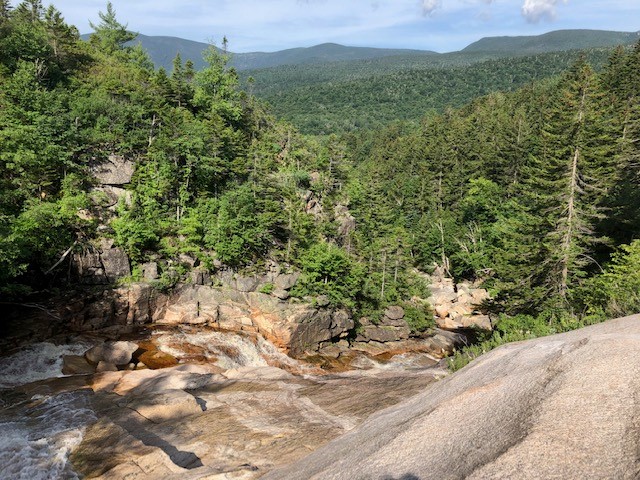 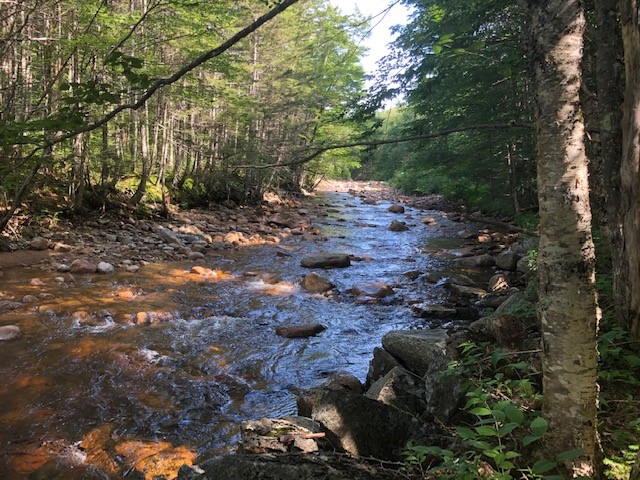 Thoreau Falls on the North Fork of the Pemi River is a gem that receives surprisingly little visits (left). The water was low, which is a good thing because we needed to cross the river above the falls to pick up the Thoreau Falls Trail and this is dangerous at high water but today it was easy. The Thoreau Falls Trail follows the river downstream (right), with a steep slope up the unnamed range to the left. It was in great shape with an easy tread and just one washout close to the river. 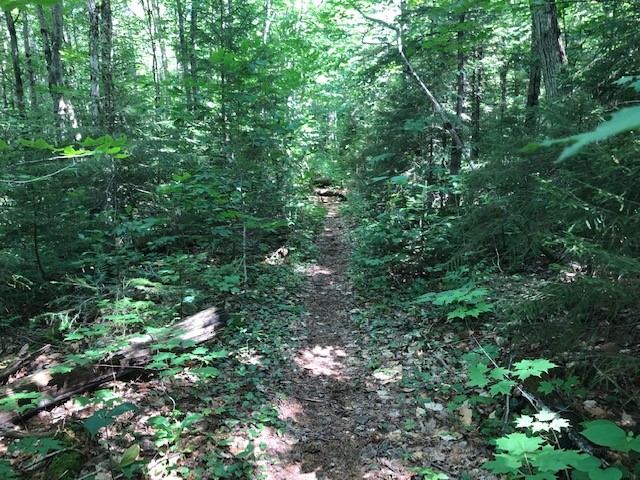 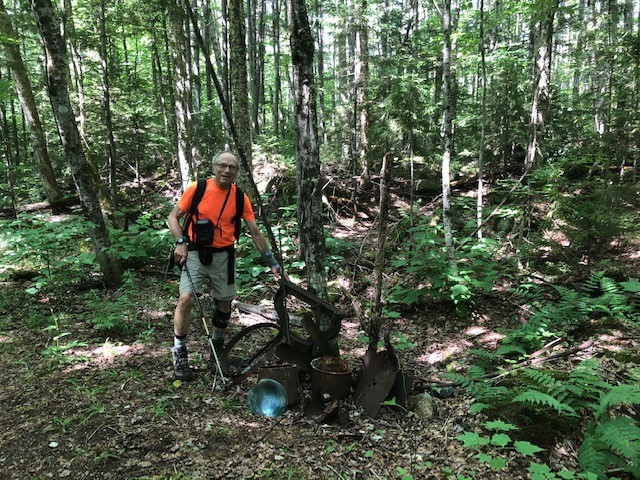 Eventually the trail turned into an old logging railroad grade (left), straight and flat, and past an old logging camp with rusted artefacts (right). 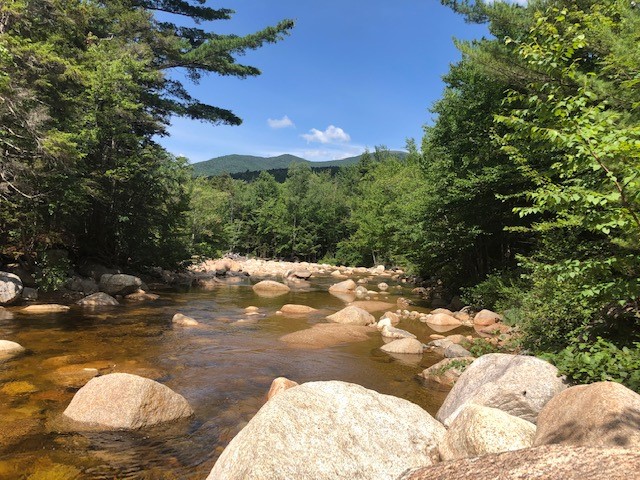 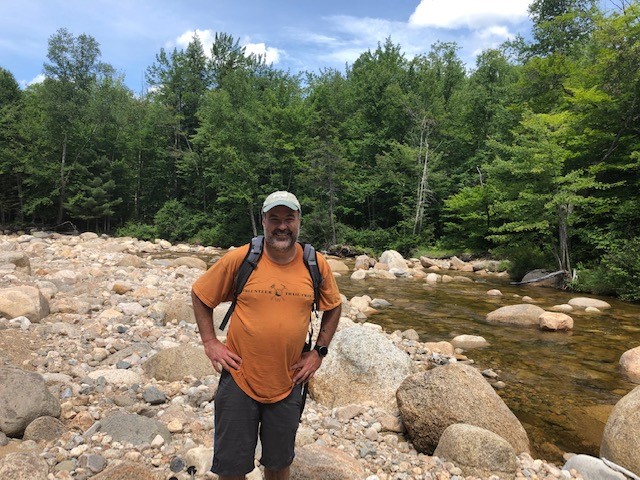 We got to the junction with the East Branch of the Pemi, with views looking up to the Bonds (left). There were remains of an old bridge removed by the Forest Service, and we had to put on our water shoes to cross (right). 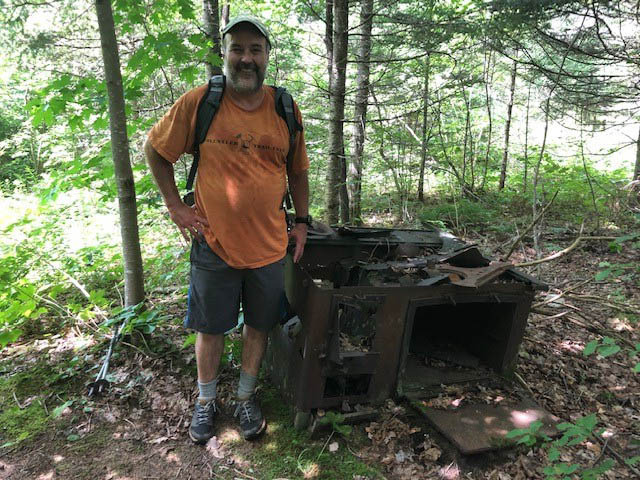 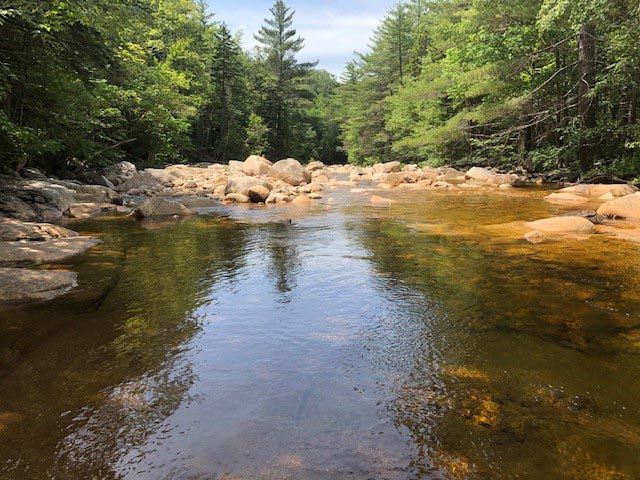 Shortly thereafter we picked up the Wilderness Trail to follow the East Branch upstream. This was another old logging railroad grade for a while, past another old logging camp with a rusted cookstove (left). The trail then hugged the river (right) and I took my first swim of the day. 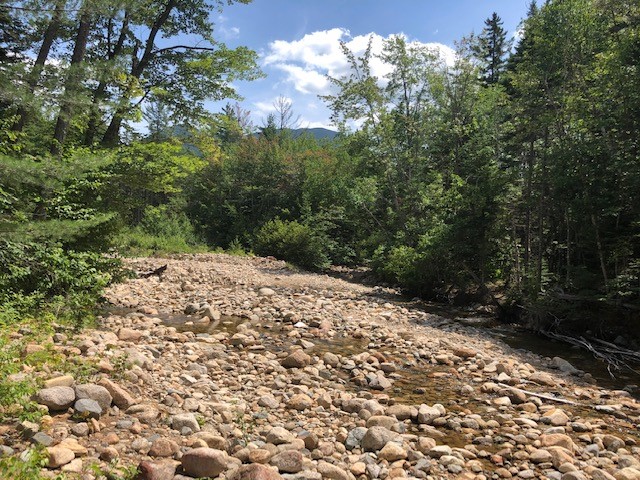 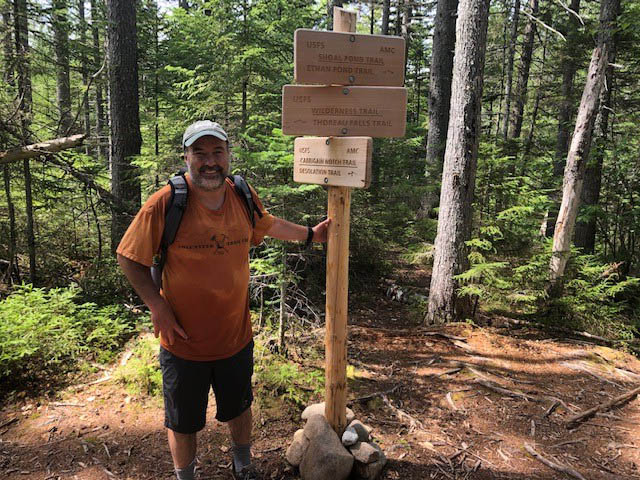 Eventually the East Branch fizzles out in a number of streams as you approach Mt. Carrigain. We crossed the Carrigain Branch (left), which flows from Carrigain Pond one thousand feet above. One of my unrealized ambitions is to bushwhack up to Carrigain Pond. Someday... In the meantime I realized another ambition to reach Stillwater Junction (right), which defines the heart of the Pemi wilderness. 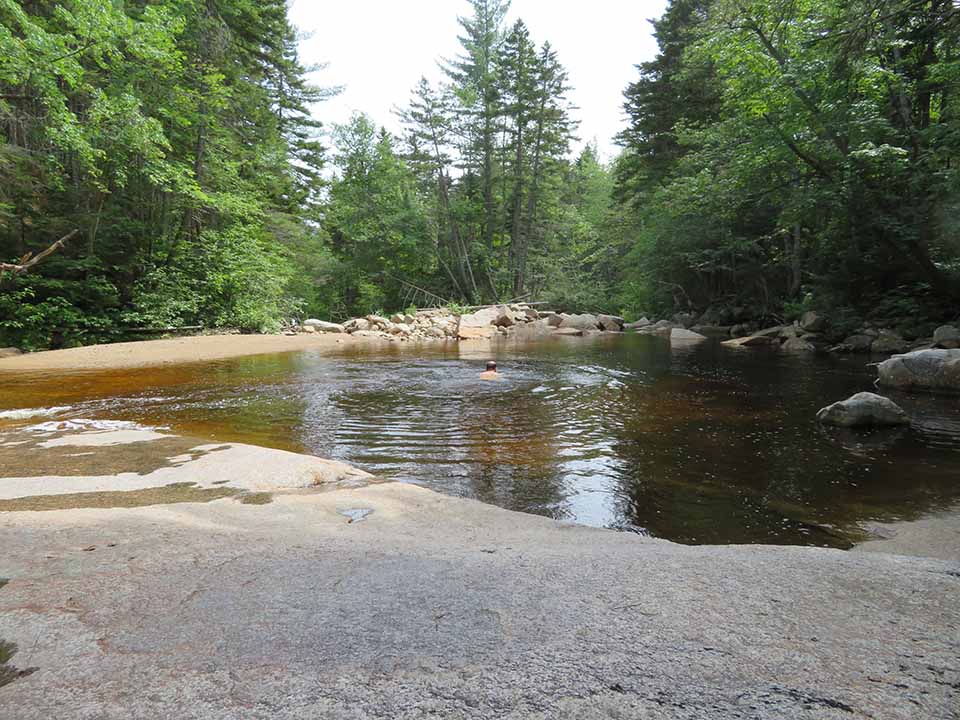 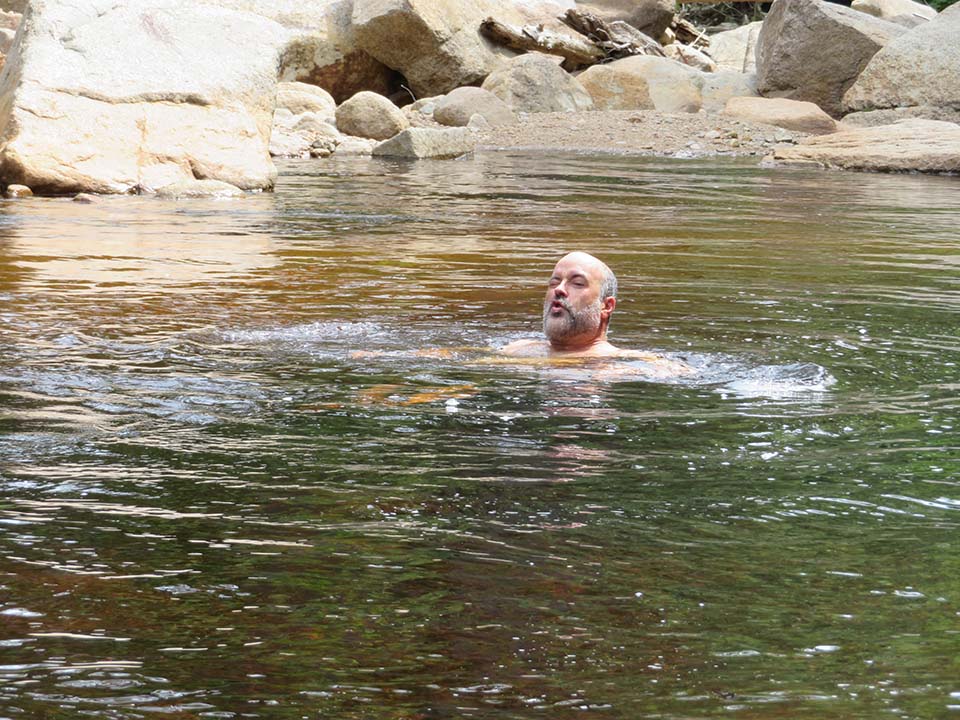 At that point we needed to cross the river to get to Shoal Pond Trail, again using water shoes. The Shoal Pond Trail took us past another abandoned logging camp and to an absolutely gorgeous ledgy cascade and pool for my second swim of the day (left and right). 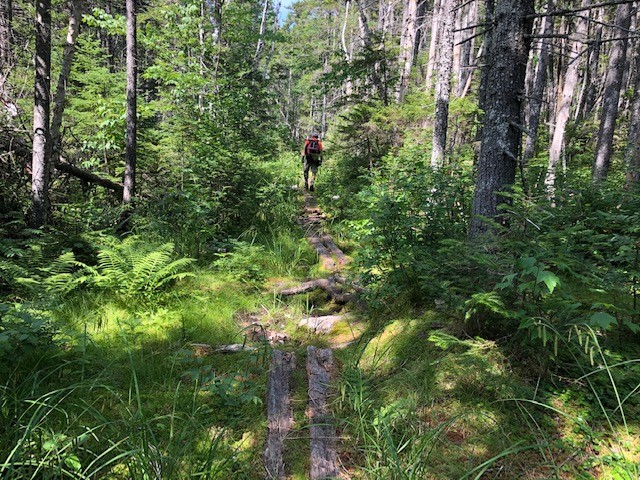 After that the trail crossed the river several times as it dwindled to a rivulet. In many places the forest was beautiful , with tall spruce on a mossy floor (left). But it also became a muddy mess, often requiring detours to avoid the worst of the mud. I was thankful for some very old bog bridges that occasionally provided relief (right). 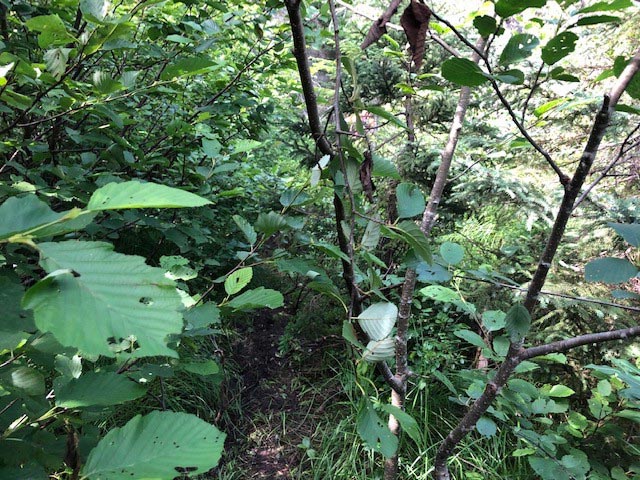 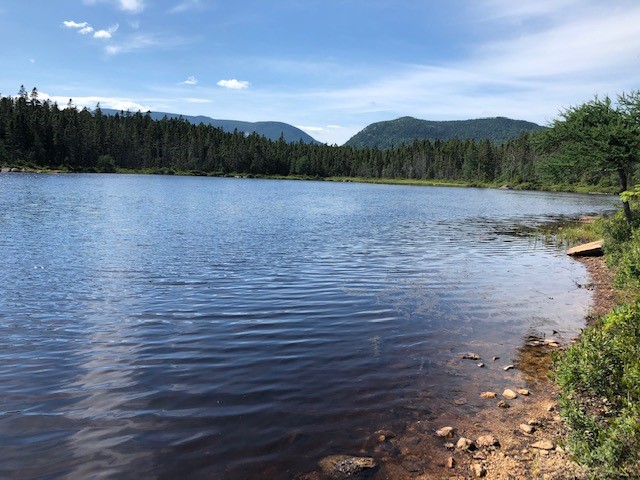 To compound the problem, the trail was severely overgrown and we often had to push our way through foliage (left). Staying on the trail was no problem because the tread was clear, but the trail really needs maintenance. We got to Shoal Pond, which I had previously visited a few times as a detour on the loop around the Willey Range. A short spur trail near the south end took us to a little beach with a nice view of Zealand Notch (right) but the water was murky and not too inviting for a swim. From there the trail stays some distance away from Shoal Pond because the shore is too boggy, and we soon got back on the Ethan Pond trail and from there back to Zealand.