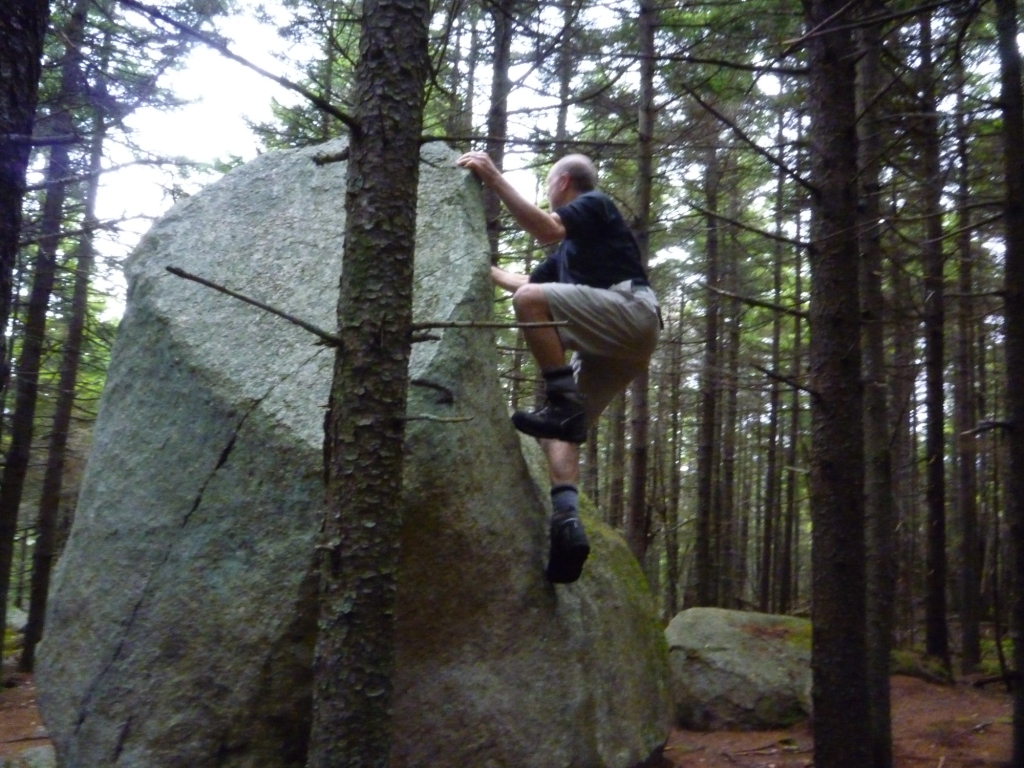 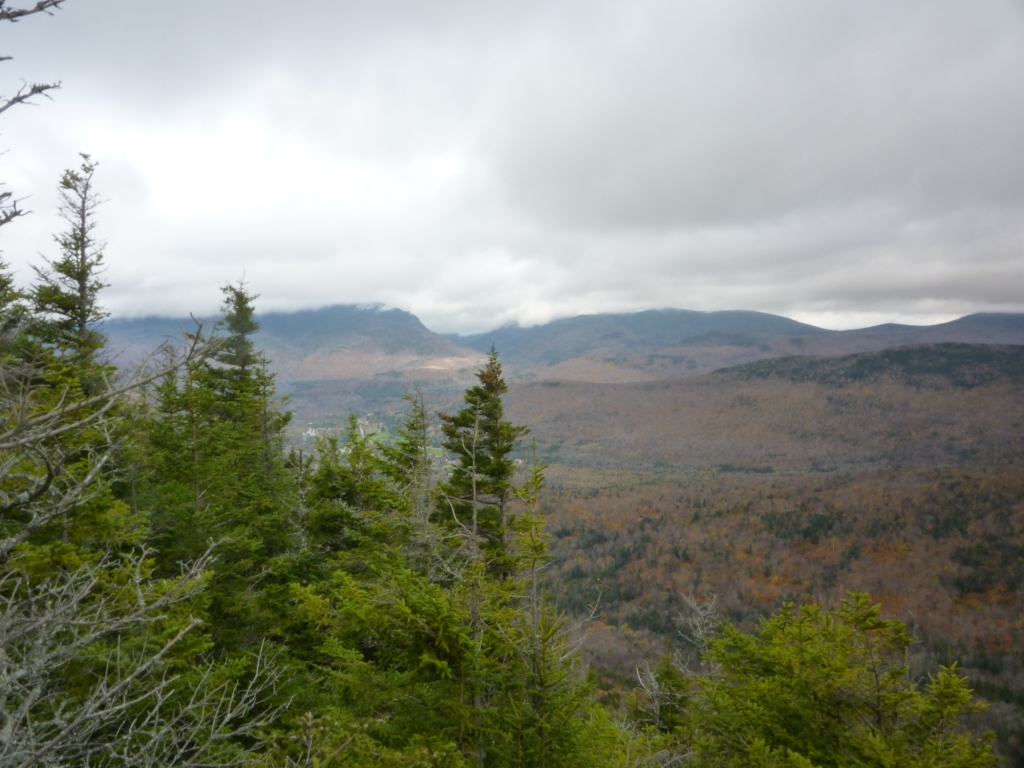 Dan Jaffe was visiting from the University of Washington and Bill Munger and I took him to the White Mountains, which had been his playground in his younger days. Low clouds were in the forecast so we chose not to go for a 4,000 footer but instead for Sandwich Dome (3,996'). We did the loop going up the Sandwich Mountain Trail and down the Drakes Brook Trail, with a side trip to Fletcher Cascades at the end. A large glacial erratic on the way up gave Dan the opportunity to show off his rock-climbing skills (left). After a stretch of steep climbing the Sandwich Mountain Trail opened up to a number of outlooks, the first one looking north to the Osceolas and Greeley Notch (right). There were good views of the valleys and low peaks but the 4,000 footers were socked in clouds. 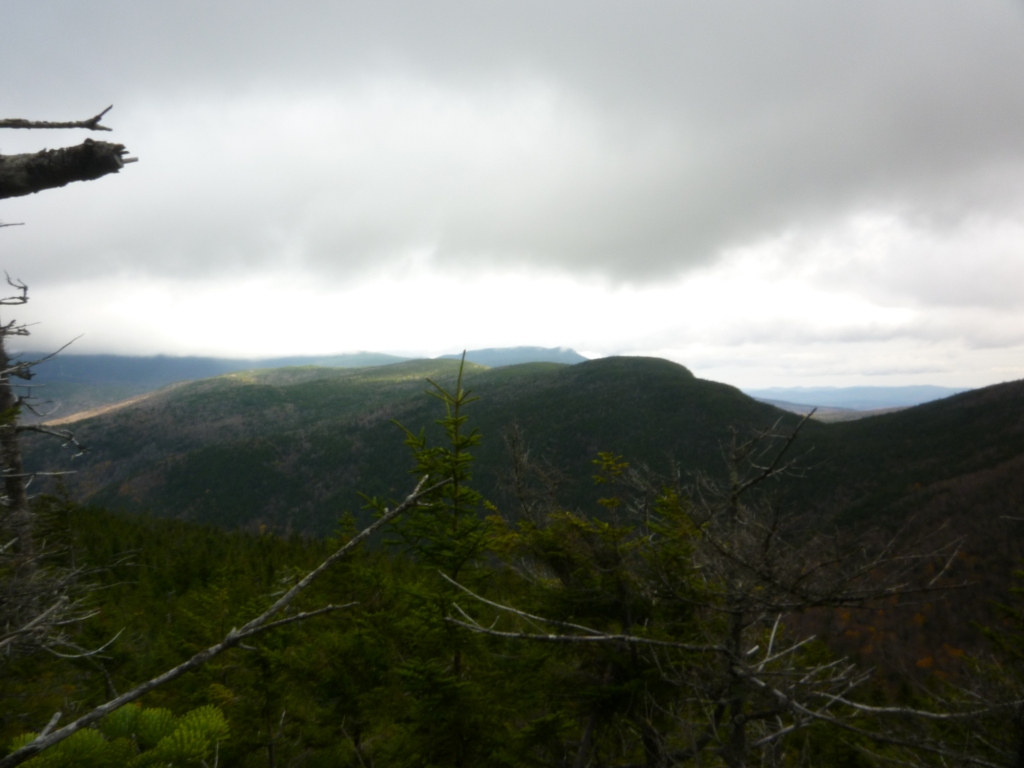 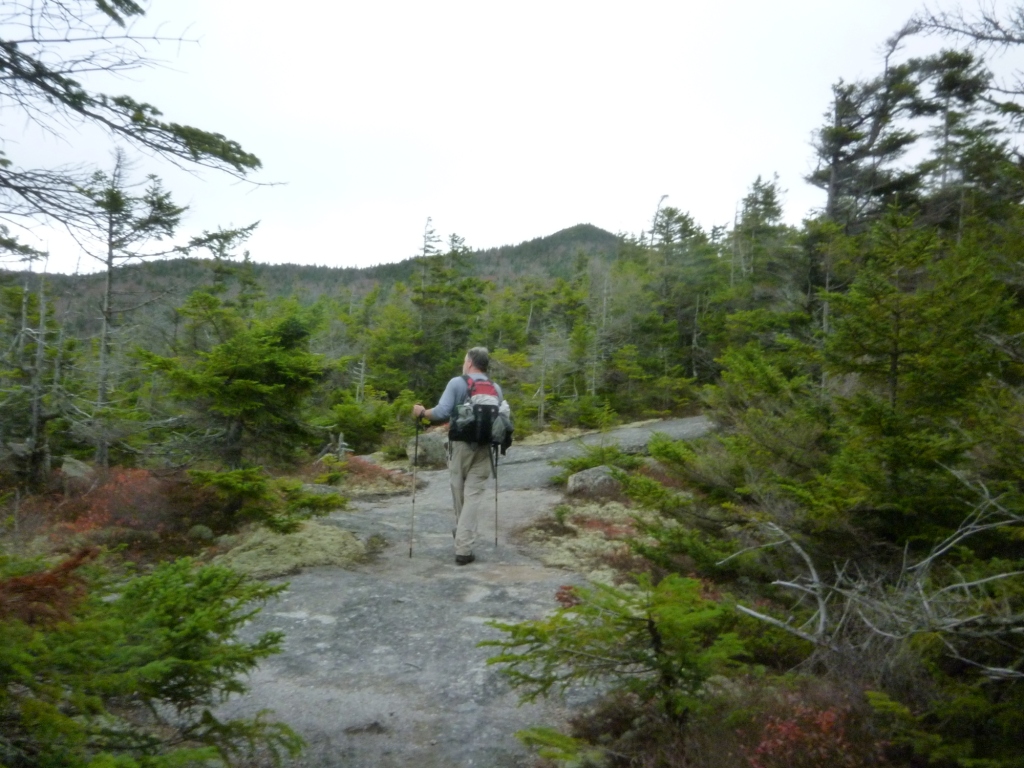 Additional outlooks on the way up the Sandwich Mountain Trail offered views to the east toward Mt. Whiteface (left), toward Jennings Peak where we were headed (right), and toward our final destination of Sandwich Dome (bottom left). Sandwich Dome may not be a 4,000 footer but it was still socked in fog. We hoped that the fog would clear up by the time we got there - hope springs eternal and irrational. paragraph 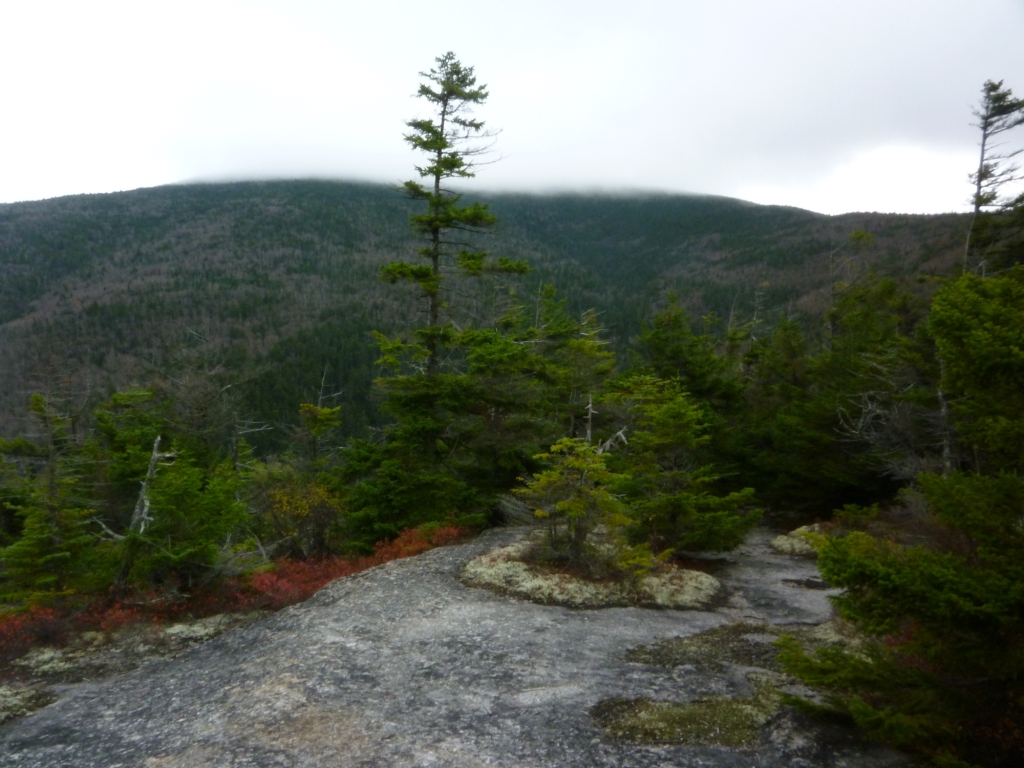 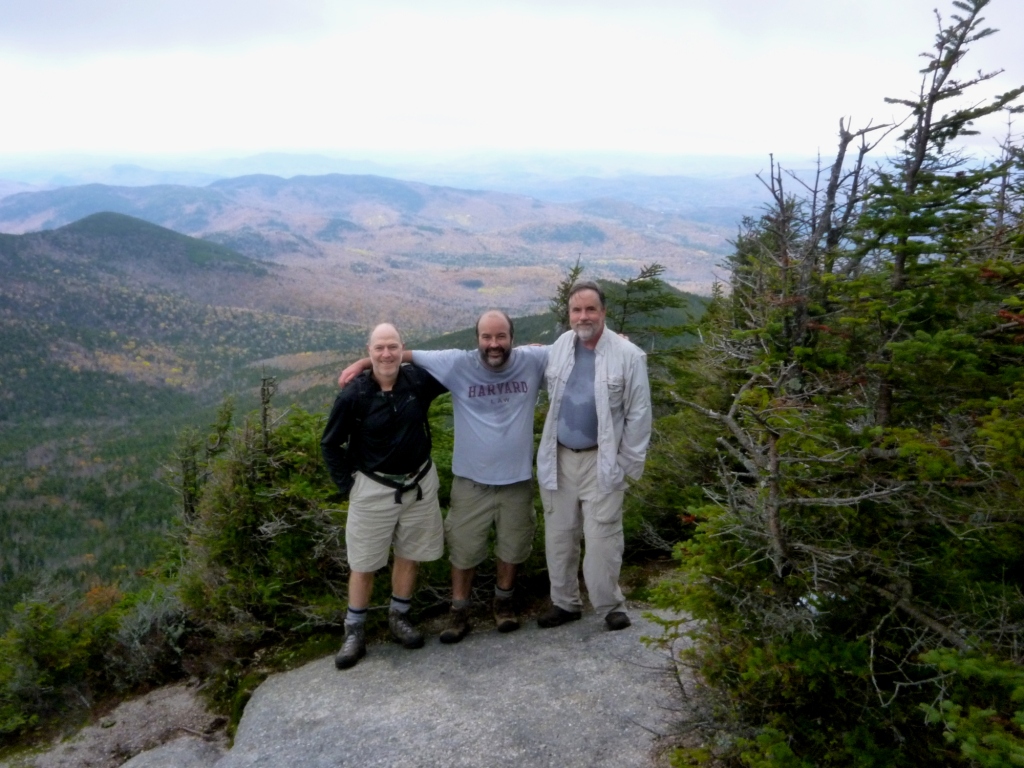 We first did the 0.2 mi. side trip to Jennings Peak (3,600') off the Sandwich Mountain Trail. This peak is known for its outstanding views from open ledges and indeed. The views looking west (right) and southeast (below left) were phenomenal. Although the foliage was well past peak (compare to Dream Lake and Gentian Pond hike two weeks before) there was still a lot of yellows from the birches. 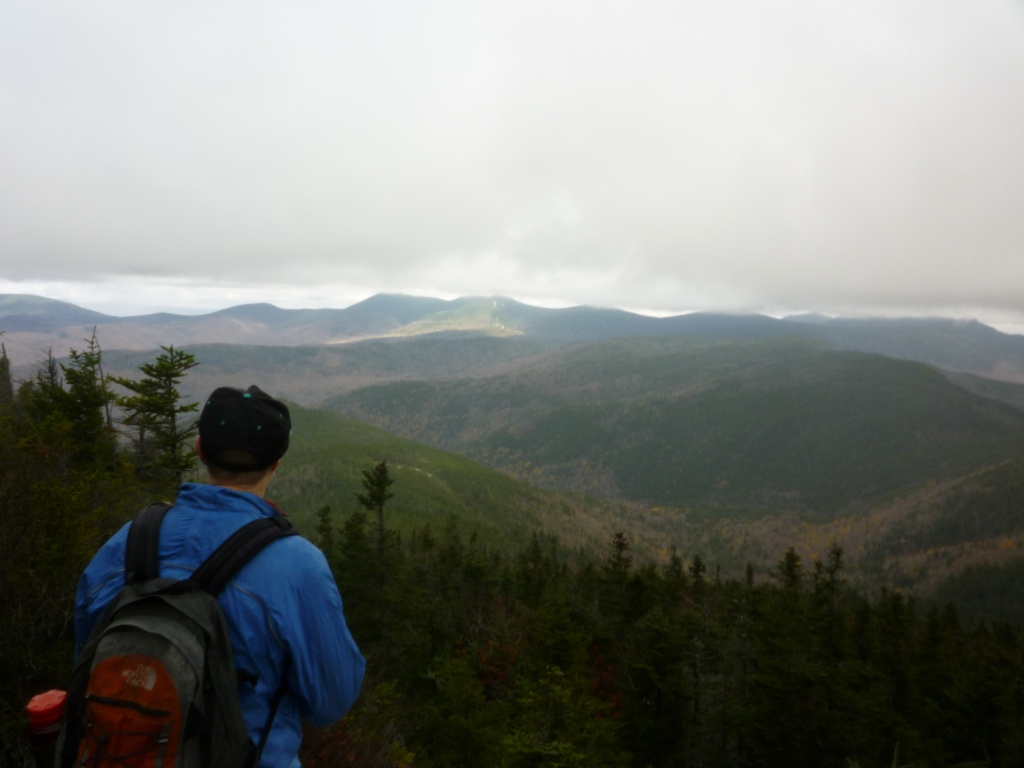 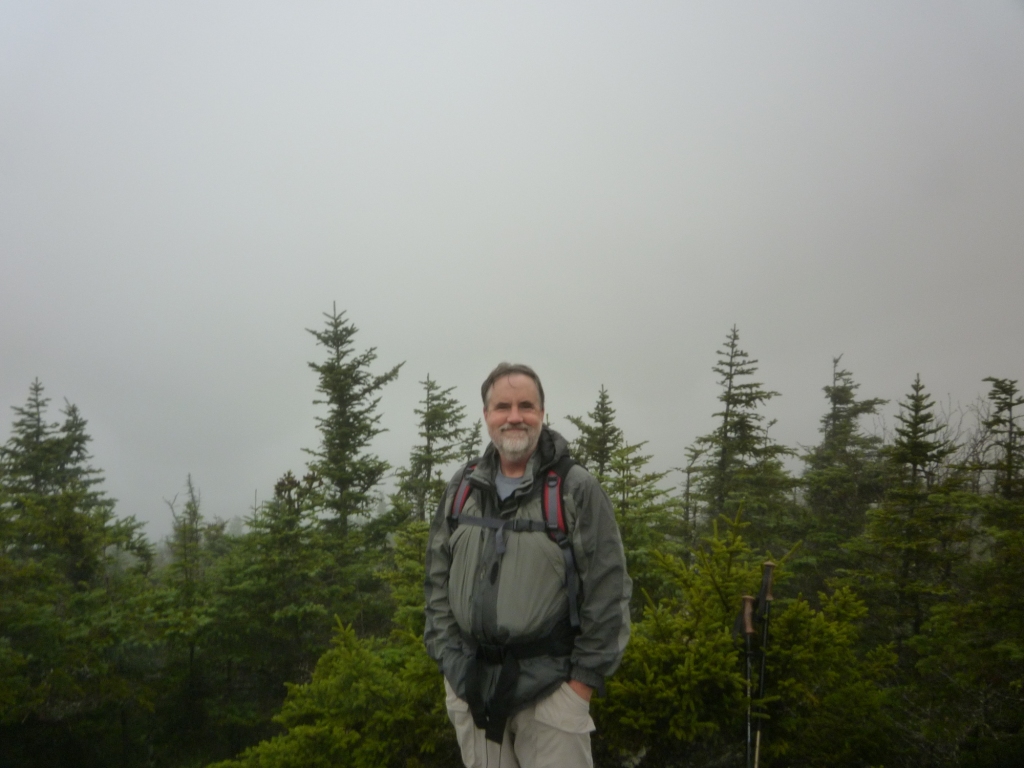 We returned to Sandwich Mountain Trail and finished the climb to Sandwich Dome. Alas, the summit was still in fog (Bill at right). There was a large pile of rocks at the summit testifying to the energy of past hikers to make Sandwich Dome a 4,000 footer. Dan tried to contribute additional height to the pile but was not very successful as it kept crumbling down - Sandwich Dome is resilient and would apparently much rather be the highest non-4,000 footer in New Hampshire than the lowest 4,000 footer. 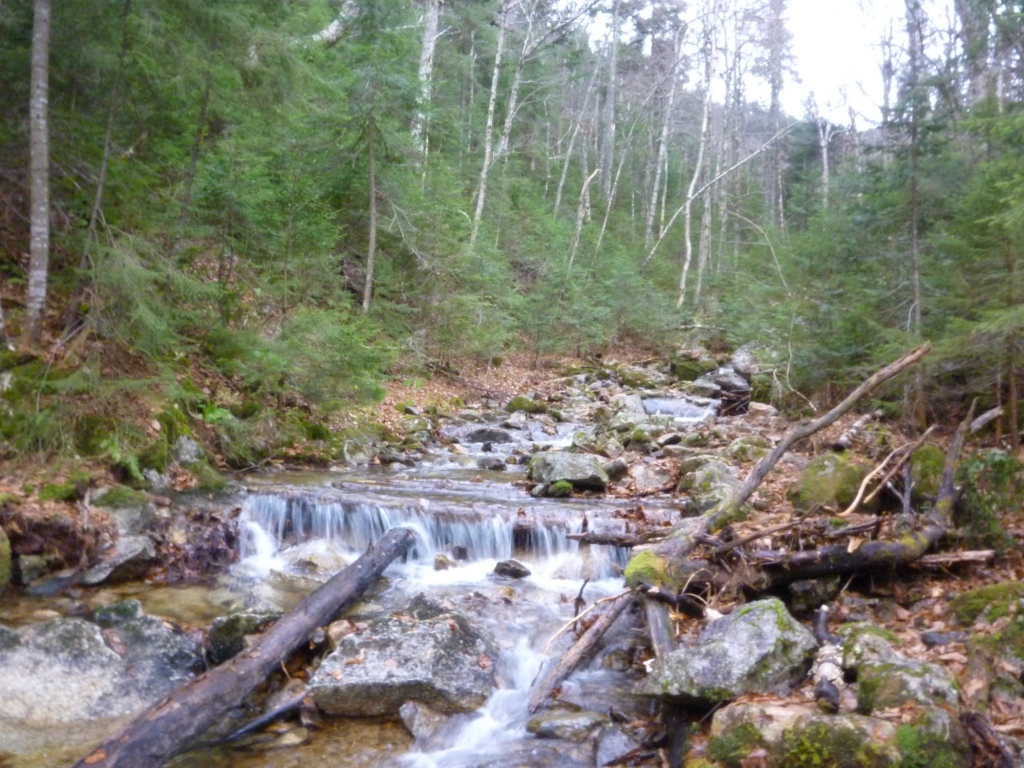 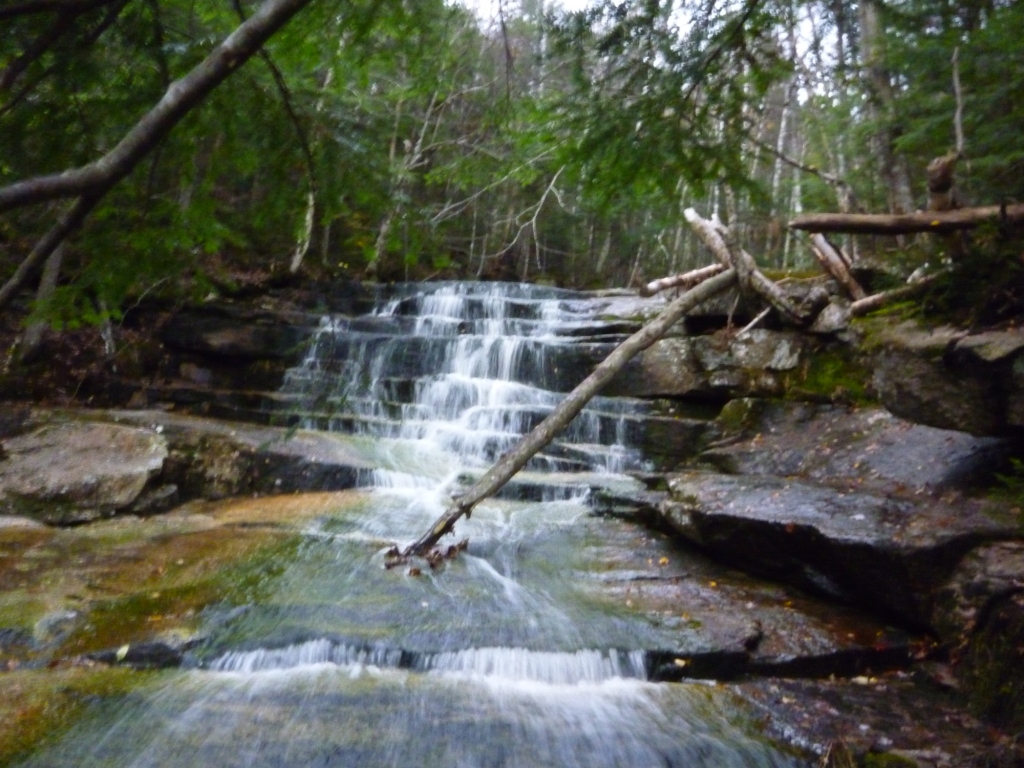 Since the fog was not lifting we did not stay on top for very long. As we began to head down it started to snow on us - my first snow encounter of the season. It was pitifully wet snow, but snow nevertheless. A little further down it stopped. We branched off to the the Drakes Brook Trail, which has a mellow grade and good footing as it goes down to reach its namesake brook (left). The trail then follows the brook down and was completely washed out in a few places, legacy of flooding from hurricane Irene which had roared through the area on August 28 - see my video of Ammonoosuc Upper Falls in Bretton Woods on that day! 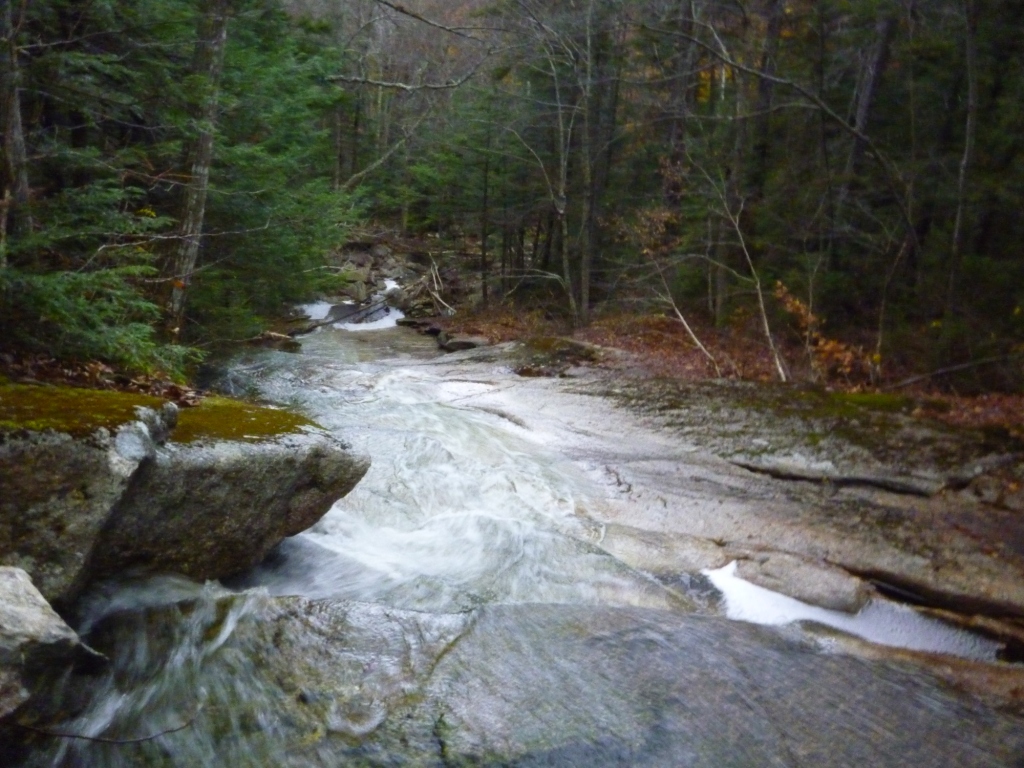 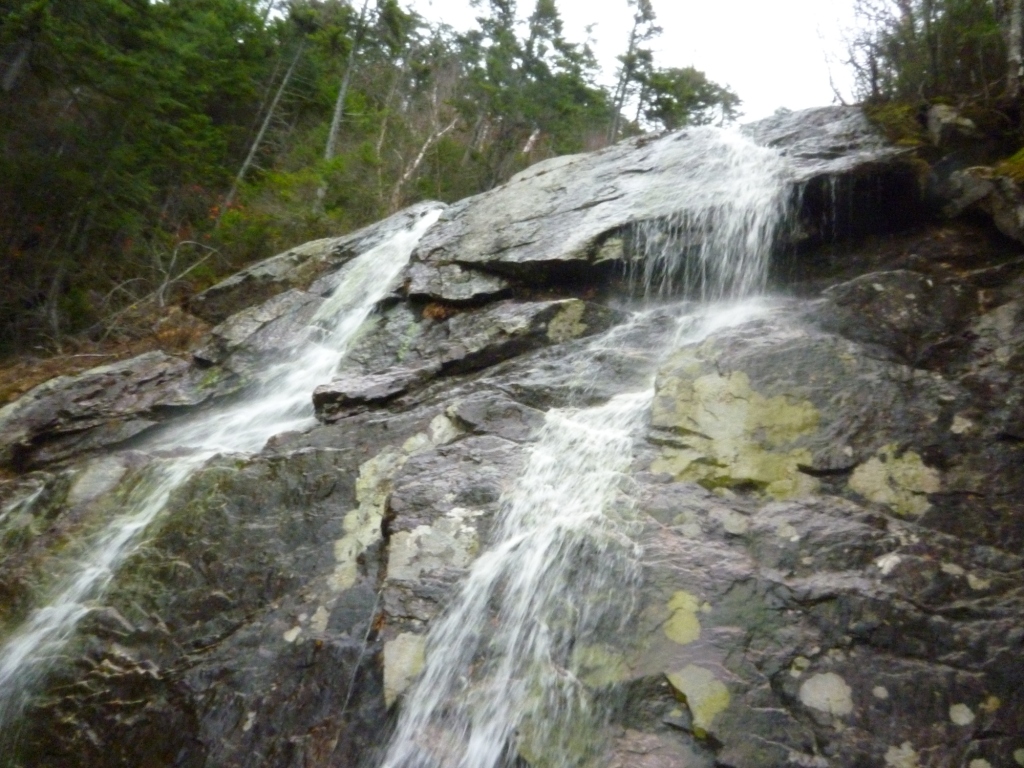 We hiked down the Drake Brook Trail to 1,700'and then bushwhacked across the brook to pick up the Fletcher Cascades Trail, which rises on the other side of the valley to a series of cascades spread between 2000' and 2,300'. This side trip is well worth it as the different cascades that you encounter as you go up have different personalities, from a wide staircase (top right) to a fast flow down a ledge (left) to a steep drop with green and pink rock colors (right). Eventually the trail petered out and we went back down for the easy hike down to the trailhead.