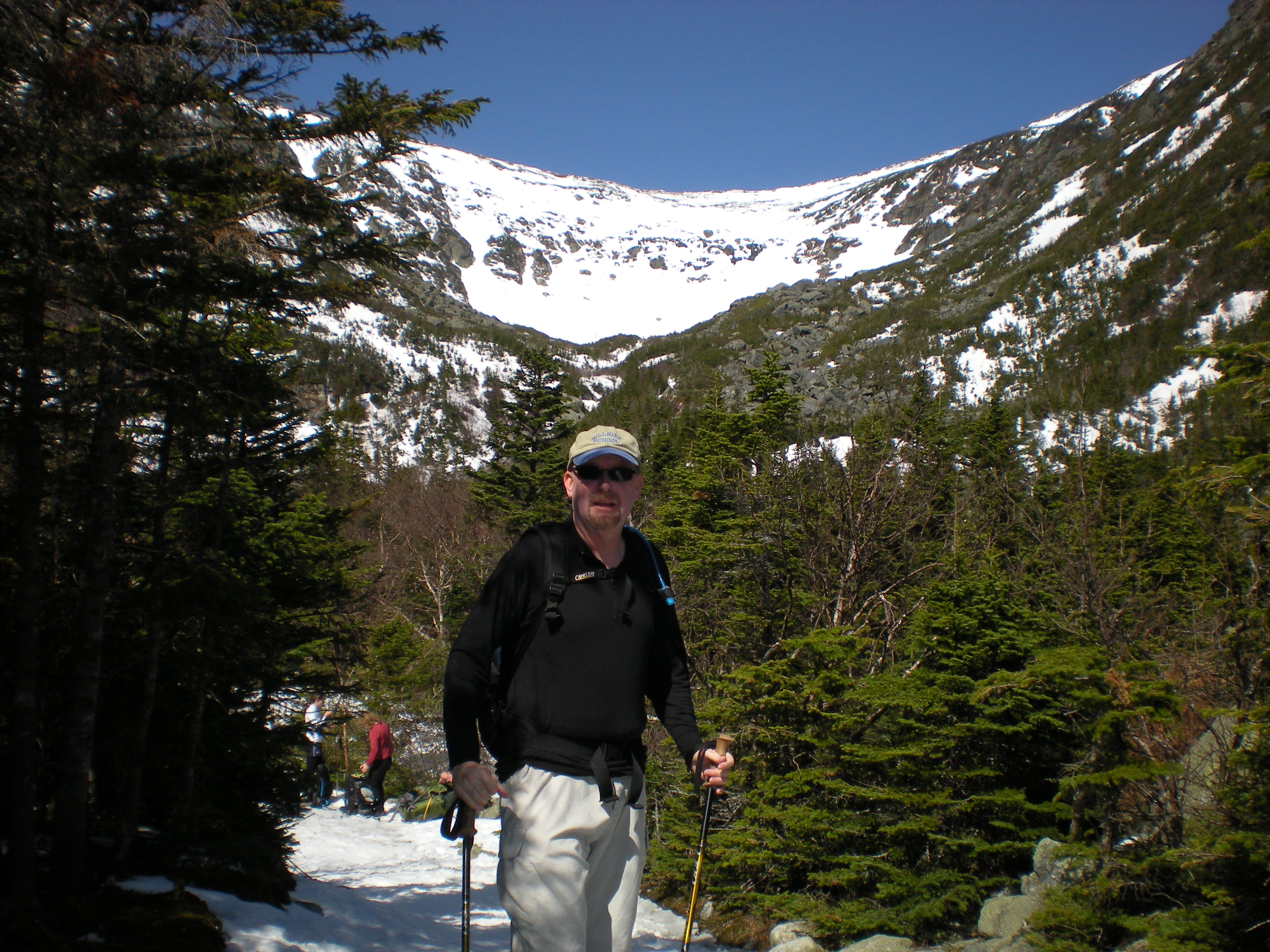 It was a gorgeous April Saturday in the White Mountains with temperatures in the 60s and no wind so I headed up Tuckerman's Ravine with Chuck Redepenning and Peter Wyatt for my last snowboard run of the season. Thousands of people had the same idea and the trail up to the Bowl was a procession of folks carrying their skis and snowboards - the crowd is part of the fun! We had snow on the trail starting at 2,600' (left) and saw that the Sherburne trail going down was roped off at 2,800'. From Hermits Lakes we had our first views of the Ravine (Chuck at right). 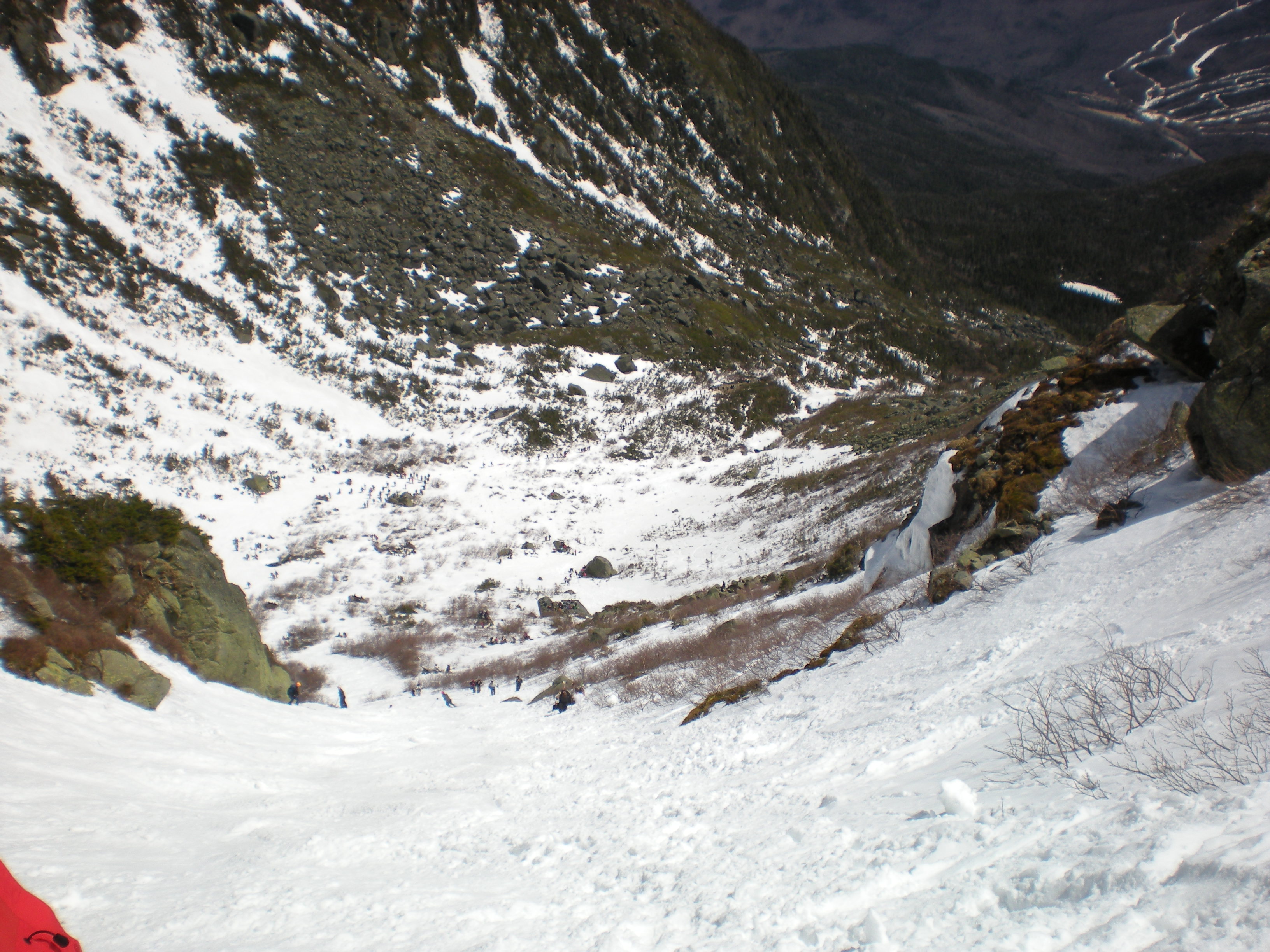 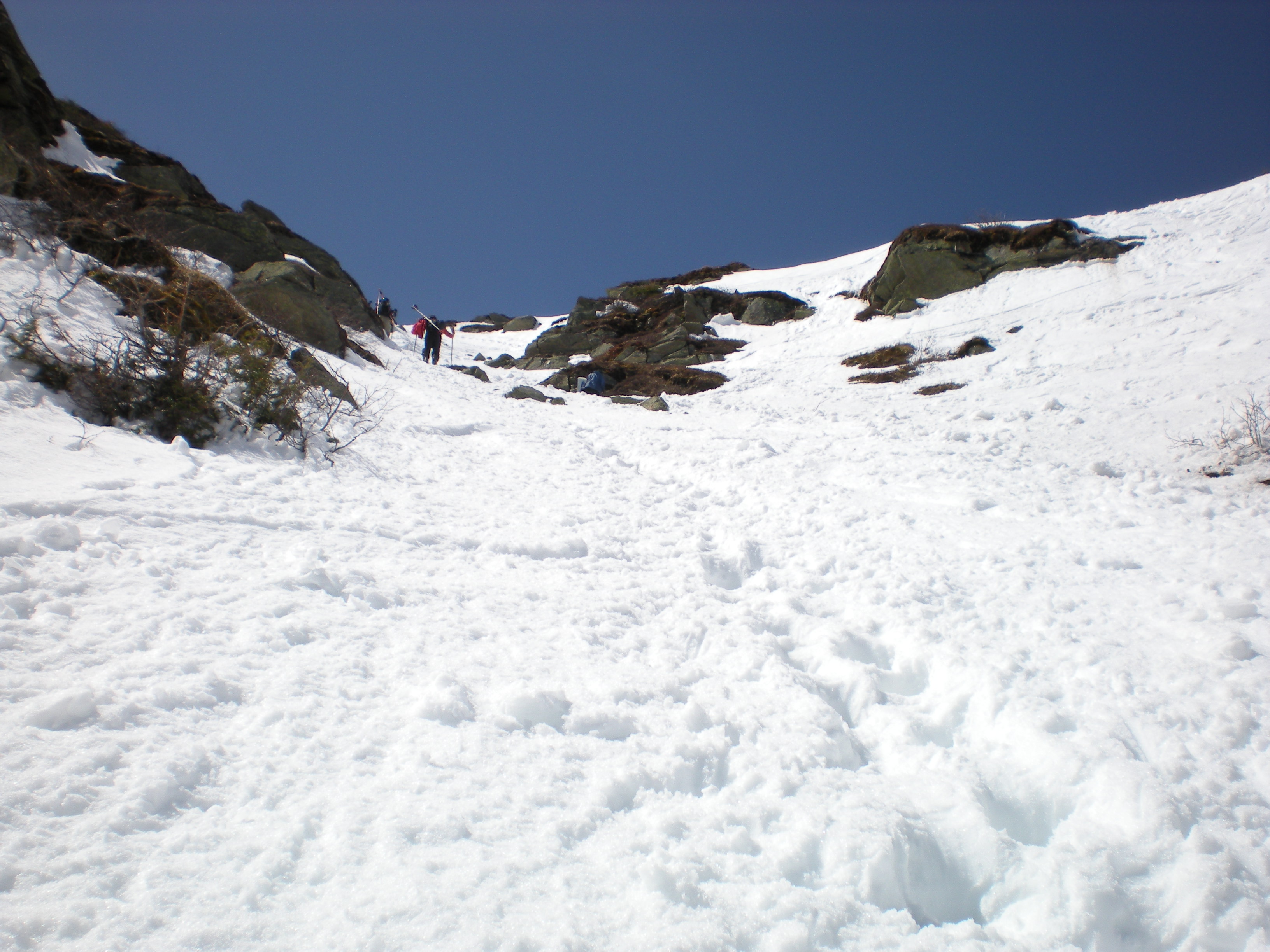 Deep crevasses made the headwall unskiable so the crowds spread out over Left Gully, Right Gully, and Lobster Claw. I hiked up Left Gully with my snowboard and as you can see from the halfway point looking down (left) it is pretty darn steep. The final climb was a bit difficult because the snow was still frozen and even though there were some steps dug in the snow it was hard to drill my boots into them and I definitely did not want to fall. So I was glad to approach the top (right). 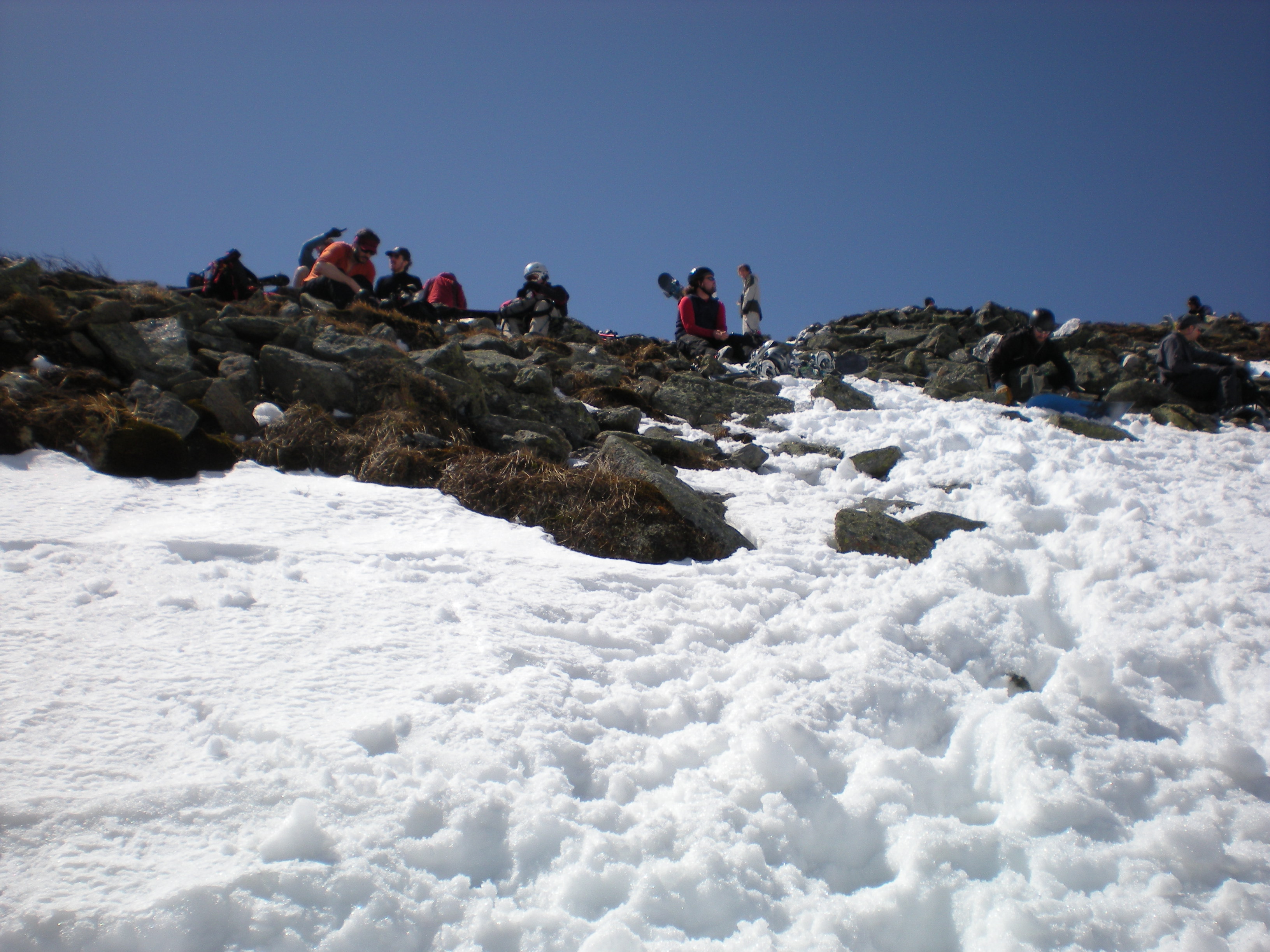 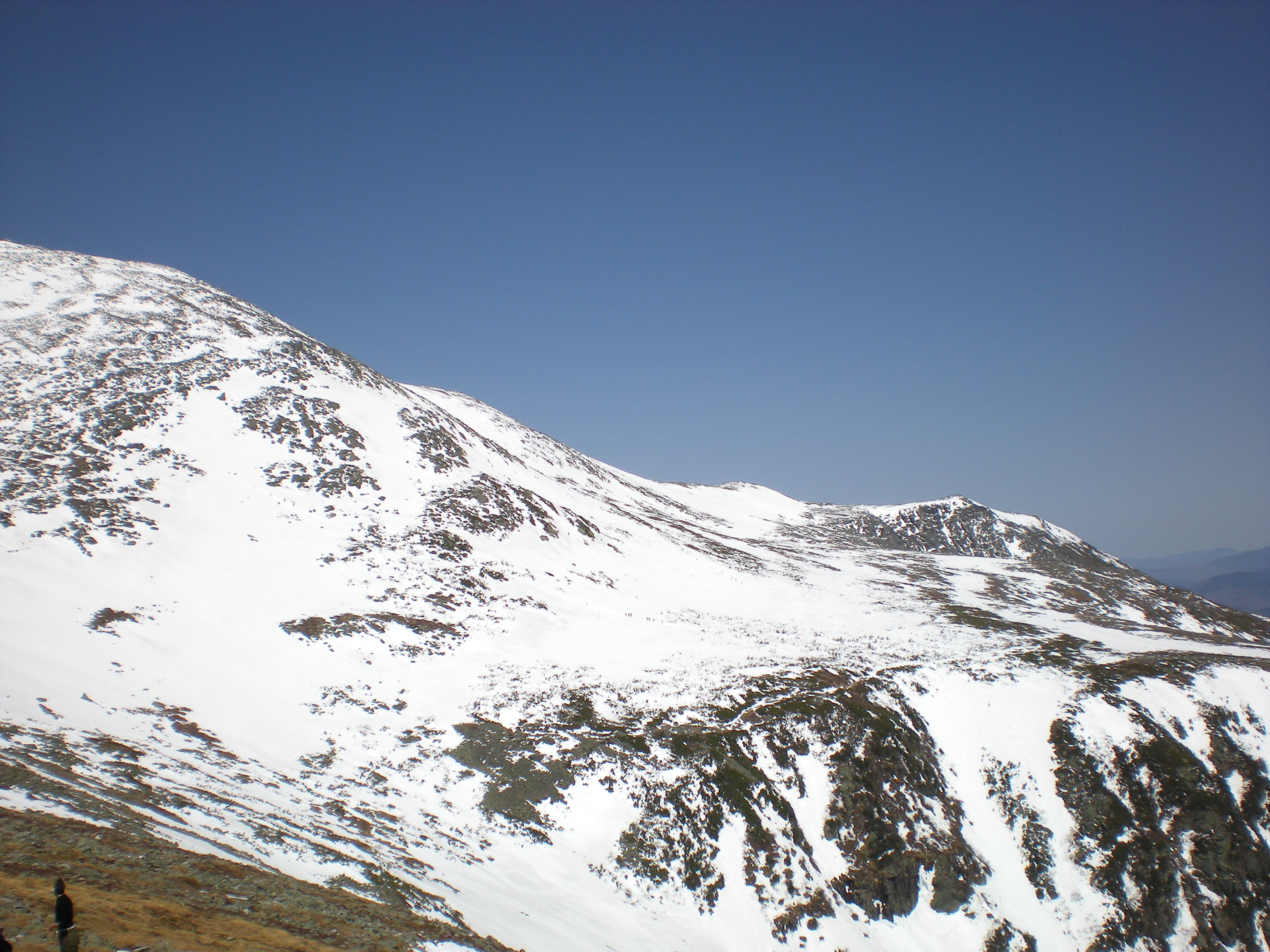 At the top of Left Gully there was a good crowd enjoying the sun and the views before heading down (left). Looking out to the Mt. Washington snow fields I could see a line of people climbing up Mt. Washington (right - zoom the picture to see the people). After getting enough of the views I put on my snowboard carefully (because the last thing you want is lose your snowboard and see it cascade down the 50 degrees slope!) and headed down. The top third on frozen snow was really tough but after that the snow was soft and it was a pleasure to get some decent turns down the gully, cruising between the rocks on the left side and the folks hiking up the gully on the right side. 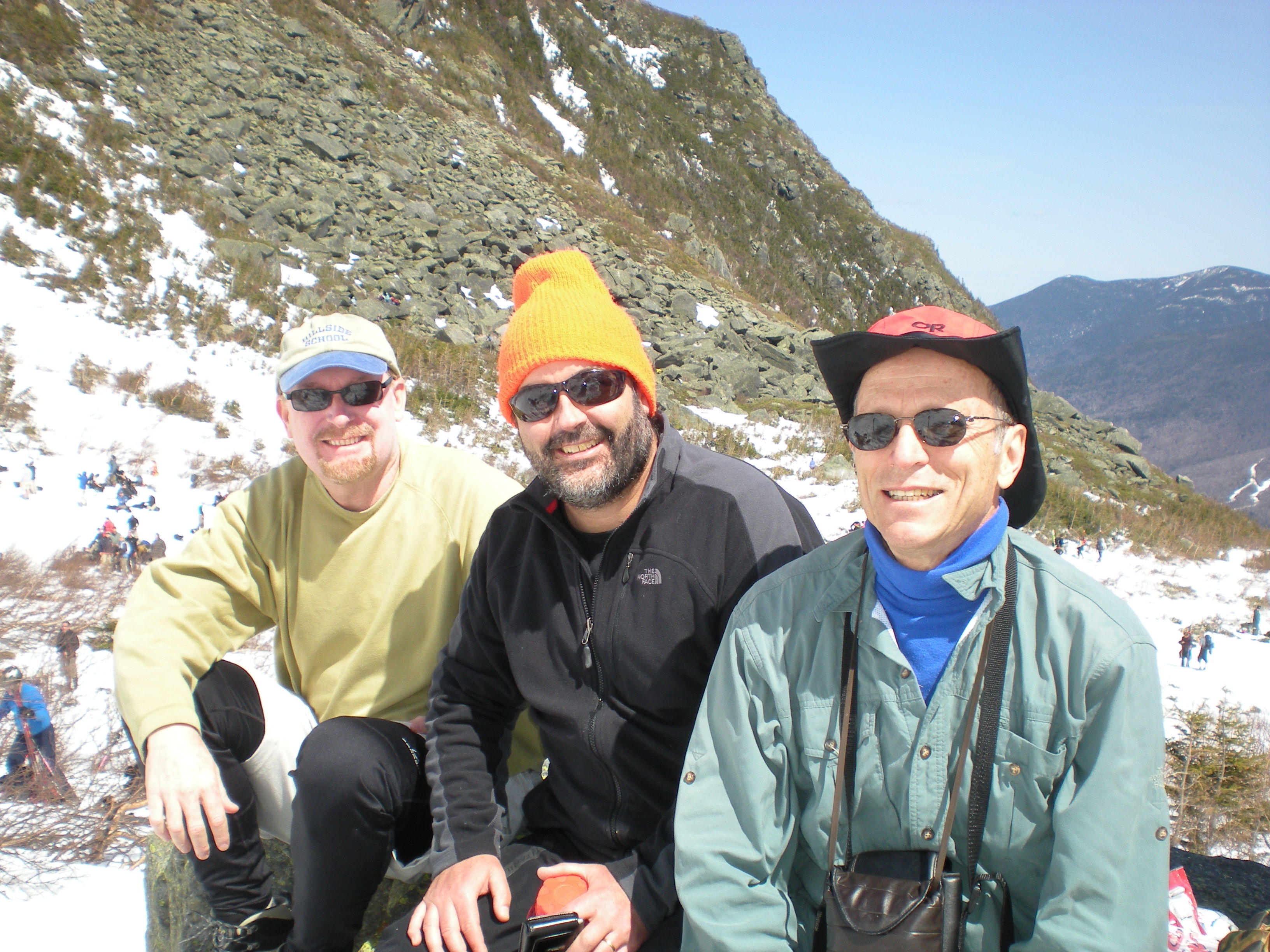 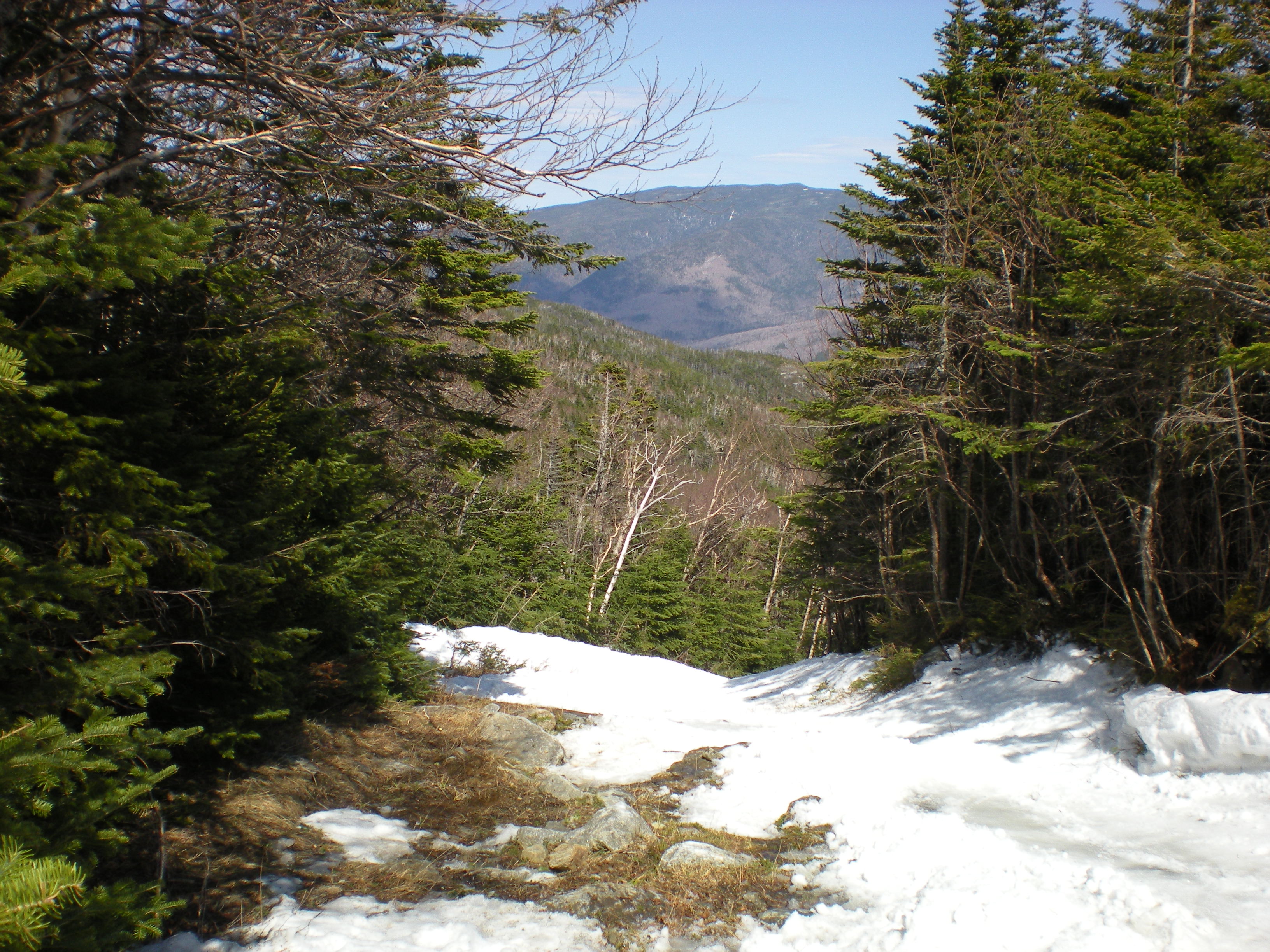 After coming back down to the Bowl I met up with Peter and Chuck, and we had a great time sitting on the rocks (left) and watching the folks go down (left). Some of these guys are REALLY good! There were even some dogs going up the gullies and the skiers had to avoid them as well as the rocks. Finally it was time to head down, unfortunately the Little Headwall run was closed because of open water and so I had to carry my board down to Hermits Lakes. There was enough snow on that trail that I did much of it on my butt. From Hermits Lakes I snowboarded the Sherburne trail down (right) and this is imho the best part of the Tuckerman trip - it's a nice gentle trail with just enough bumps to be interesting. I had to remove my board on some of the bare spots and totally ran out of snow some distance above the rope, at which point I crossed over to the hiking trail and met up with Chuck and Peter (great timing!) for the final hike down.