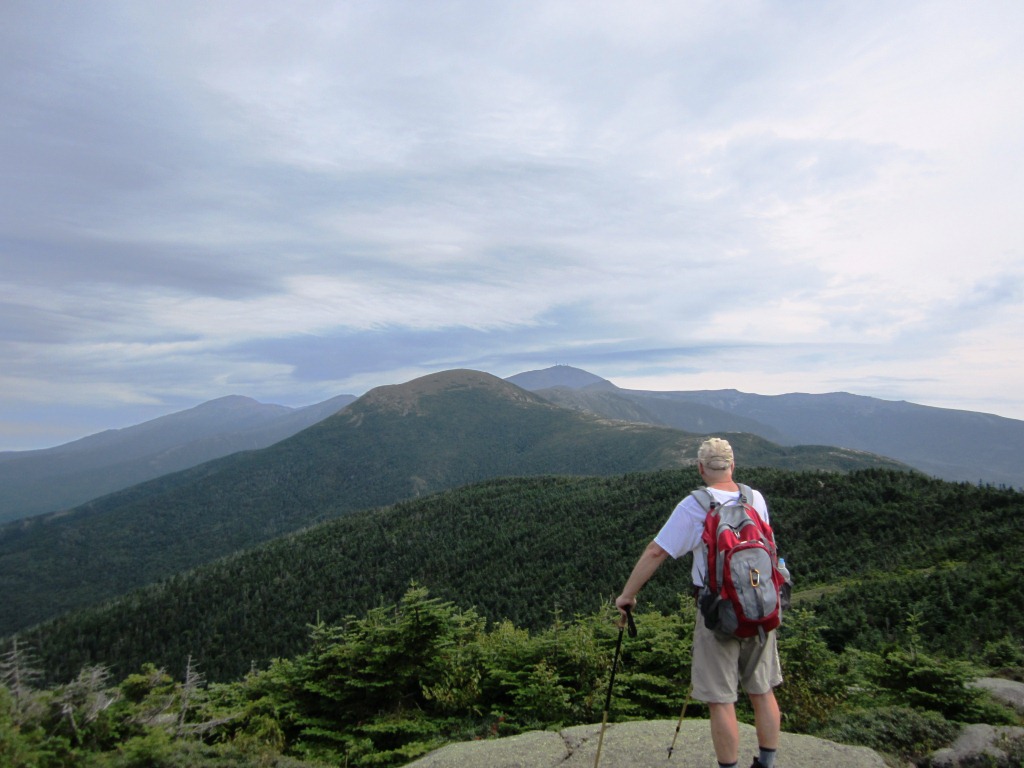 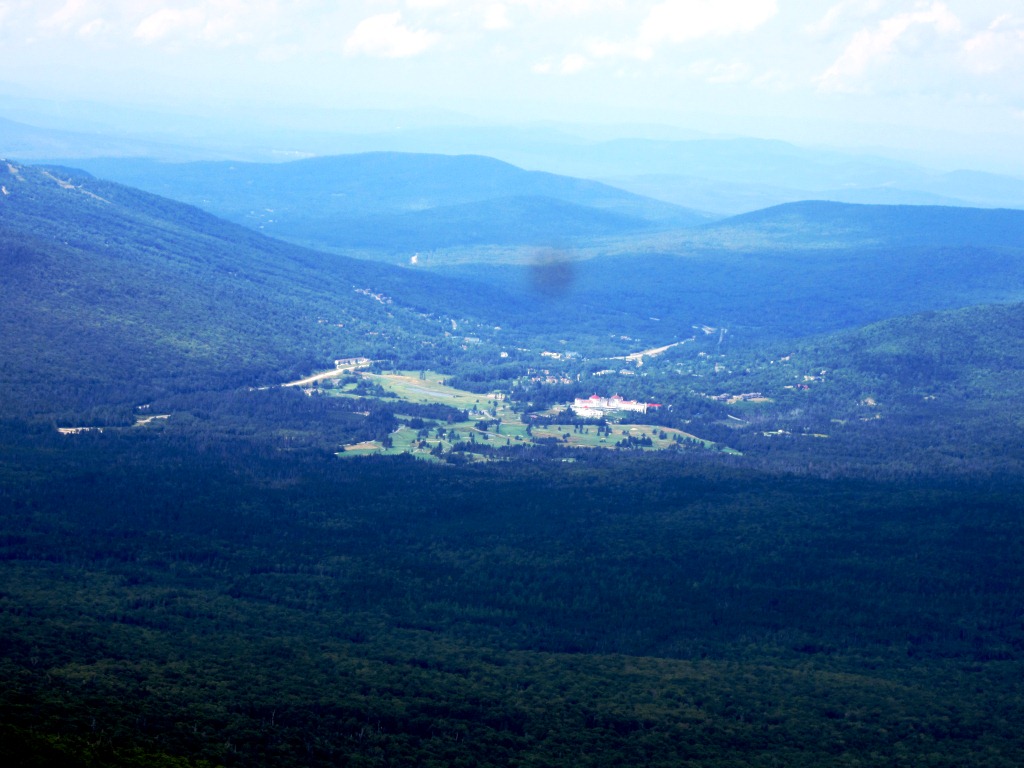 It had rained in Bretton Woods for the past several days. Great working weather but I had energy to release. The weather this Sunday wasn't great but Roger Gagne, Peter Wyatt, and three friends and relatives of Peter's were headed to climb Pierce and Eisenhower. I figured I would take initial pleasure of their company and then keep going. Previously this season I had done Webster to Pierce, so this was an opportunity to finish off the southern Presidentials. We climbed to Pierce by the Crawford Path. At just 4,200 ft. Pierce already takes you above treeline, with great views to the north (left) and of Bretton Woods down below (right). 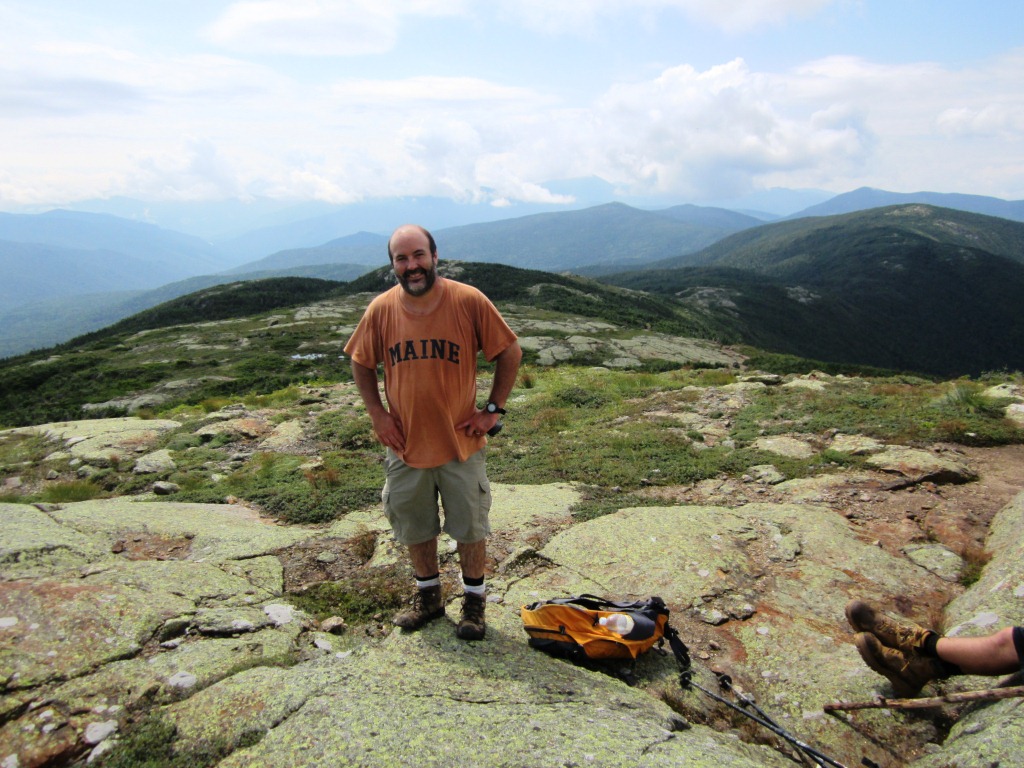 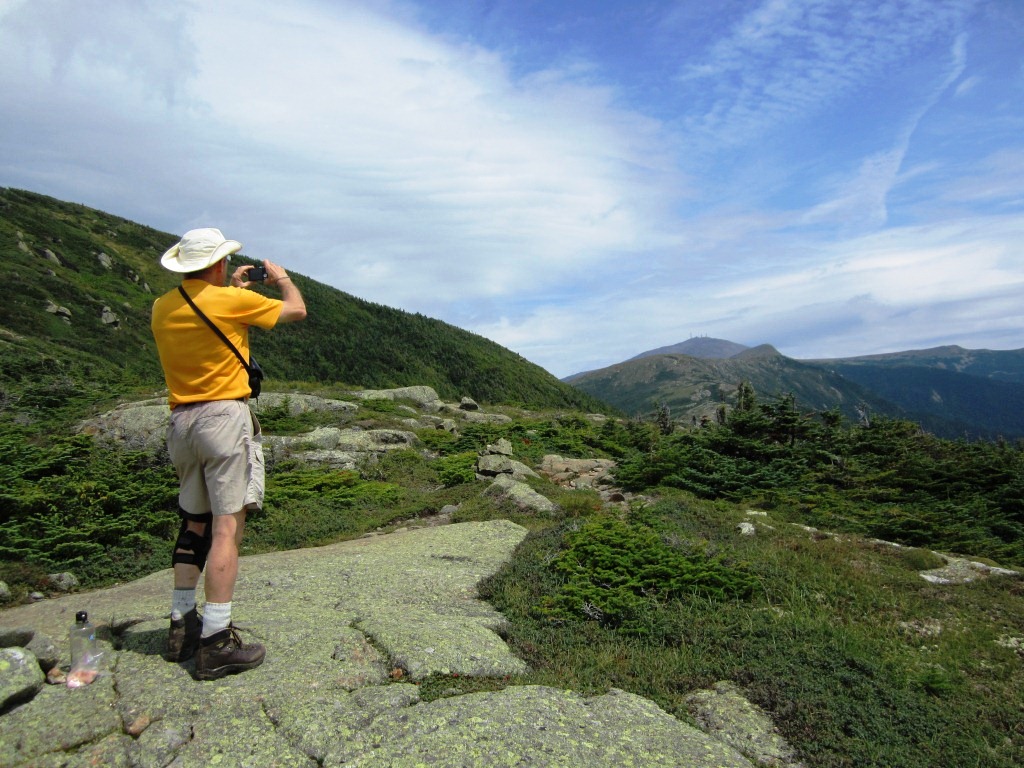 From Pierce we continued on the Crawford Path which drops into the col with Eisenhower. Last time I had done that trail was in May 2009 and it was full of snow. It is a great trail, very ledgy and with nearly-continuous views, looking back toward Pierce (left) and ahead towards Monroe and Washington (right). 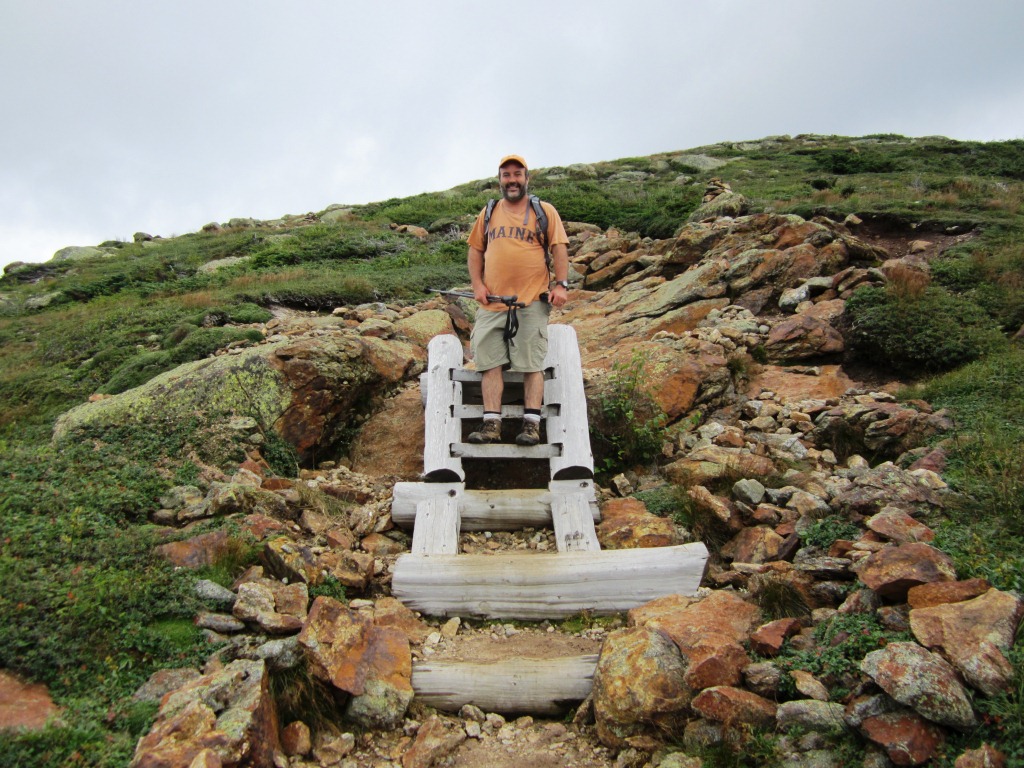 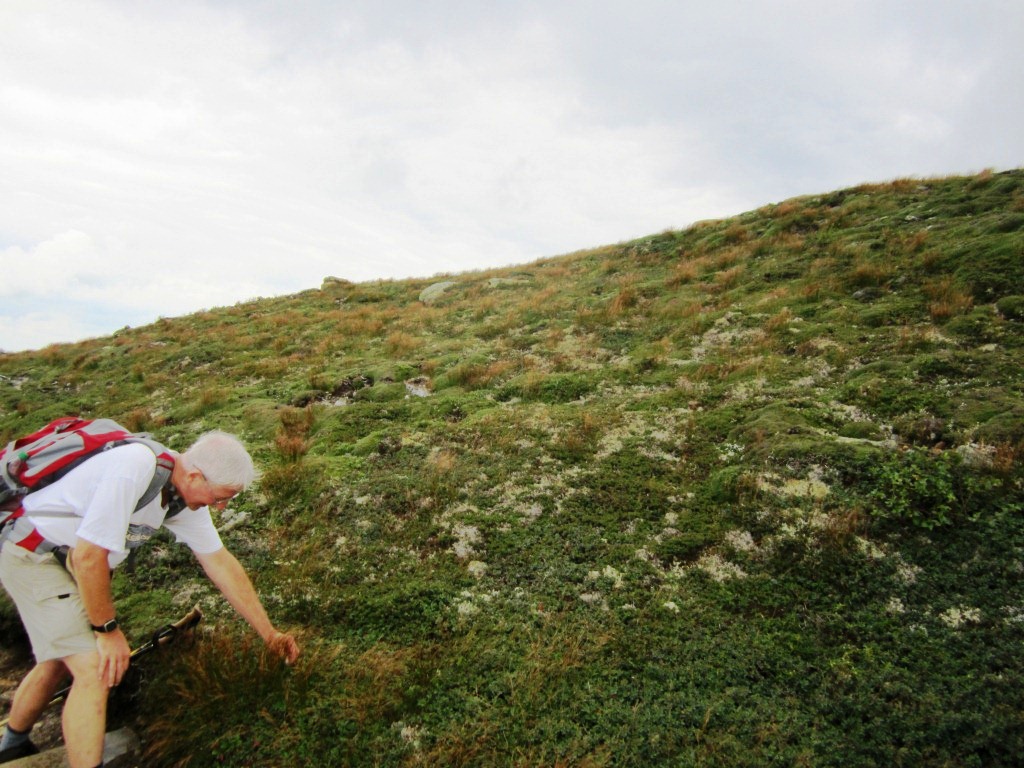 We took the Eisenhower Loop Trail to climb to the top of Eisenhower. The trail was lined with blueberries and cranberries (left). An incongruous ladder stood where it was really not needed (right), reminding us of a similar ladder on the Pemi Trail last week. 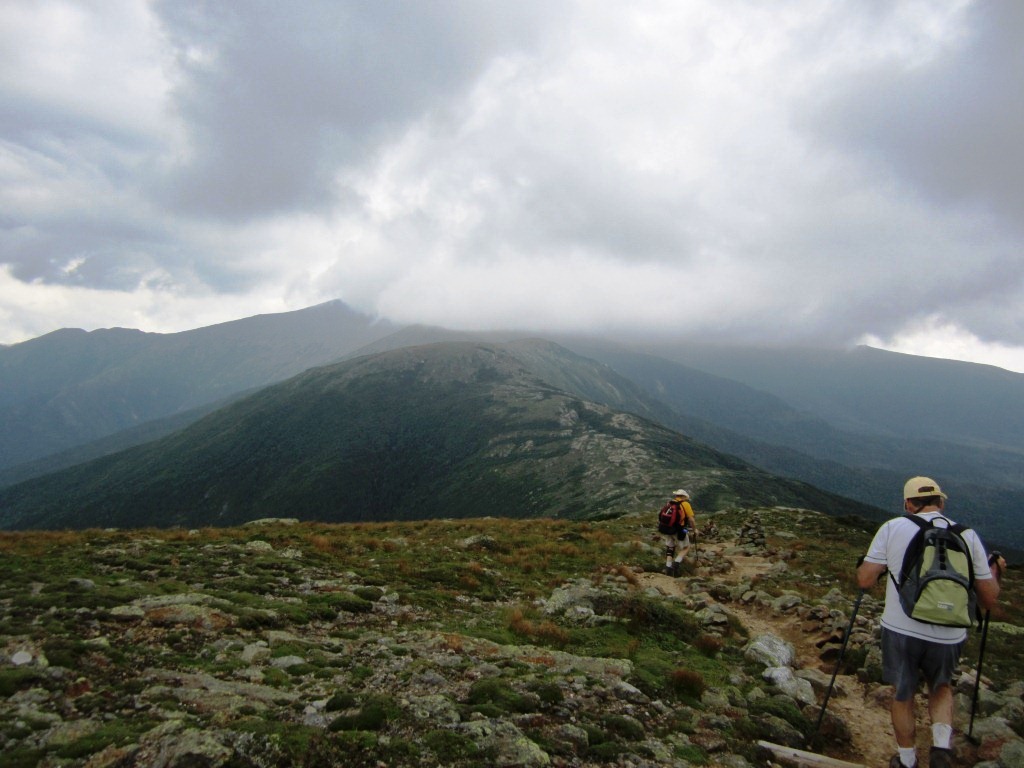 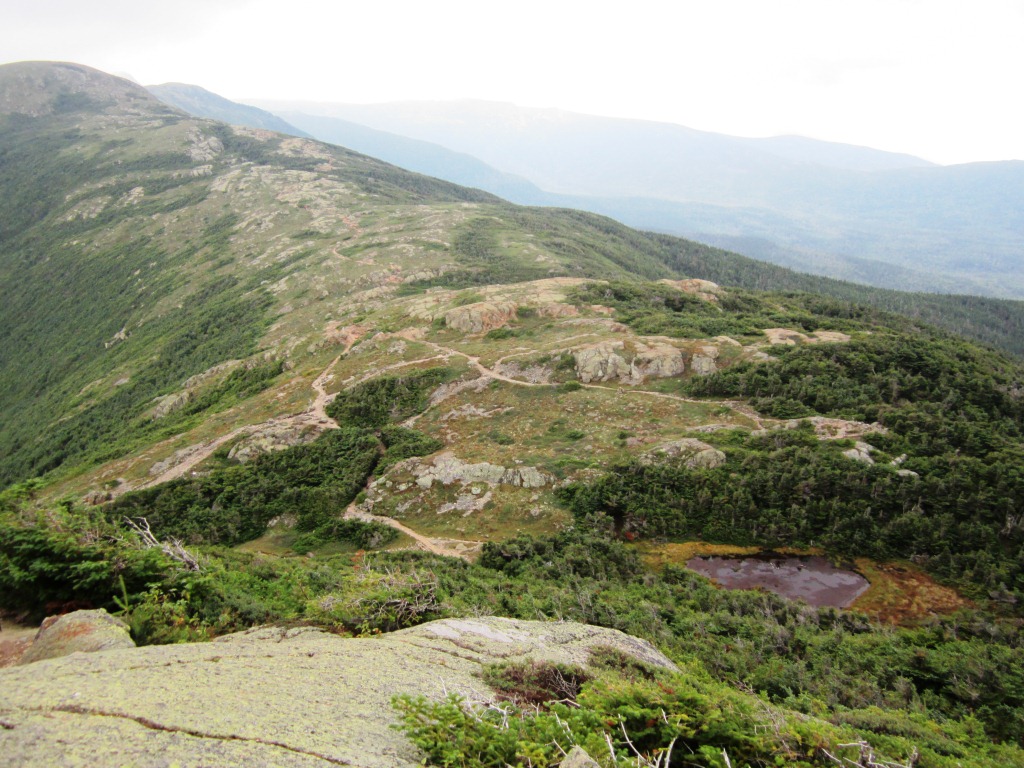 We got to the top of Eisenhower which is rounded and grassy. There is a big difference between the summits of the northern and southern Presidentials, as I just noticed. The northern Presidentials are just jumbled piles of rock (with the affectionate exception of Mt. Clay) but the southern Presidential have a much smoother and gentler feel, with expansive tundra lawns (left). From the top of Eisenhower we went down to the col (right). Peter asked me the name of the lake (puddle?) down in the col and I was embarrassed not to know. I'm sure it has a name. 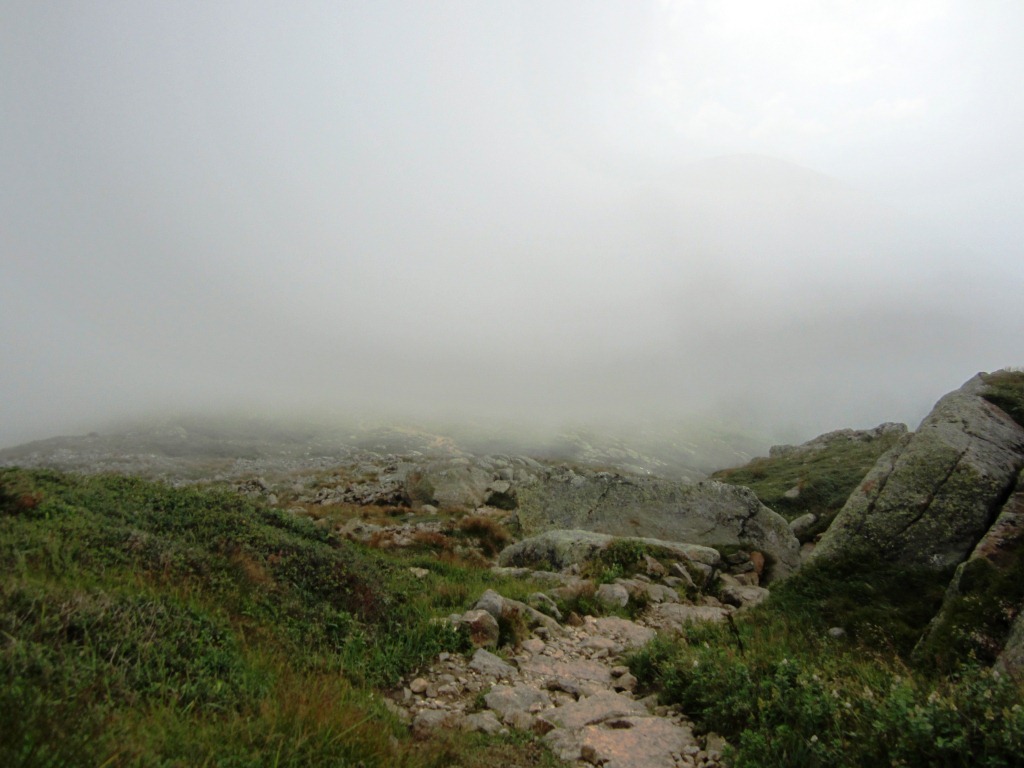 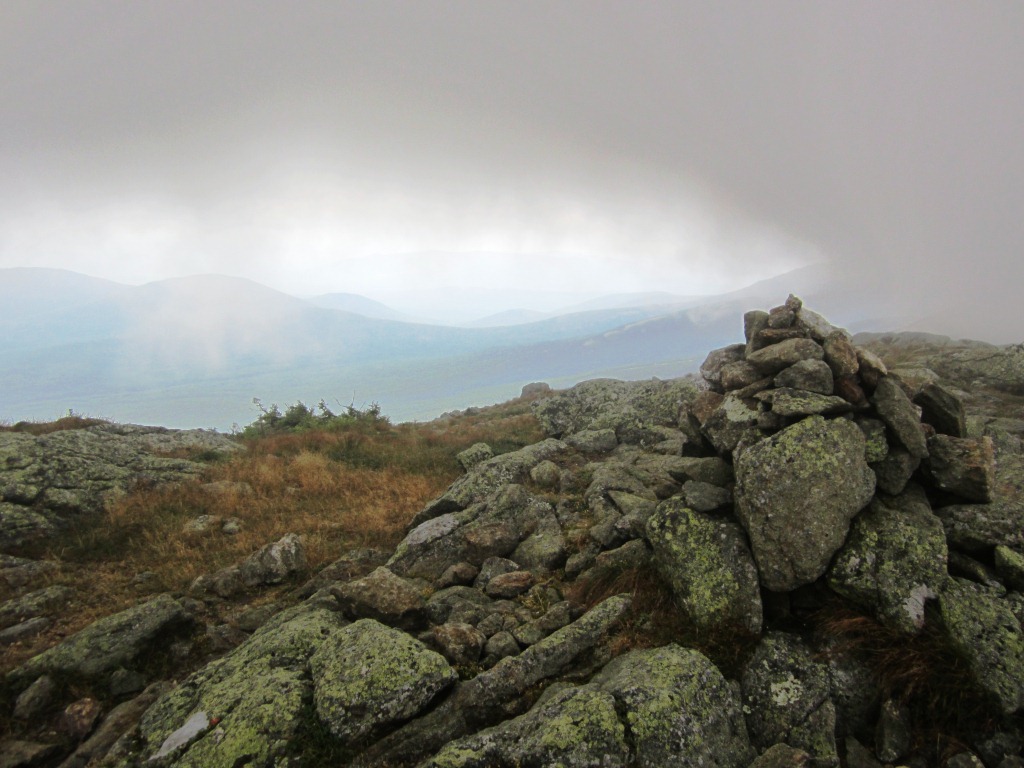 From the col my companions took the Edmands Path down to the trailhead, while I continued my southern Presidentials ramble. As I climbed to my next destination of Mt. Franklin, fog began to roll in (left) and I loved it - fog gives a mysterious aura to the whole place and I've seen all the views before anyway. It also started to sprinkle, which I didn't love as much, but fortunately that never materialized into serious rain. I reached the top of Mt. Franklin in intermittent fog (right). There I met a party of hikers in anguish because they were headed to Mitzpah hut and feared for the weather. I did my best to reassure them - it really didn't look bad at all. 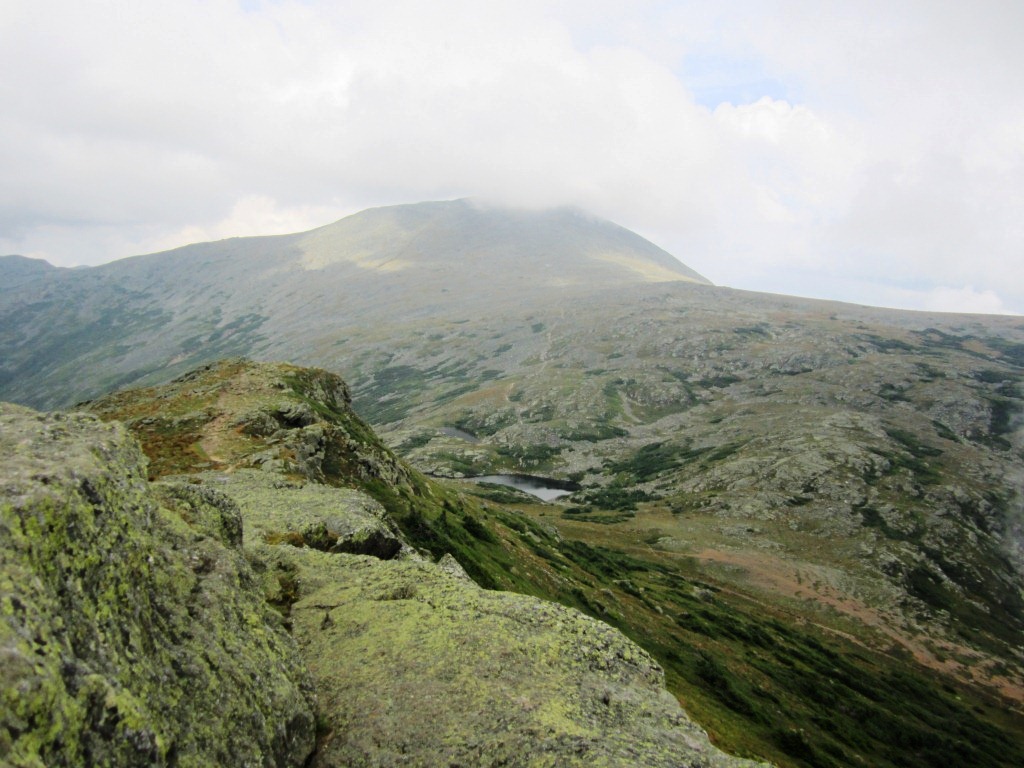 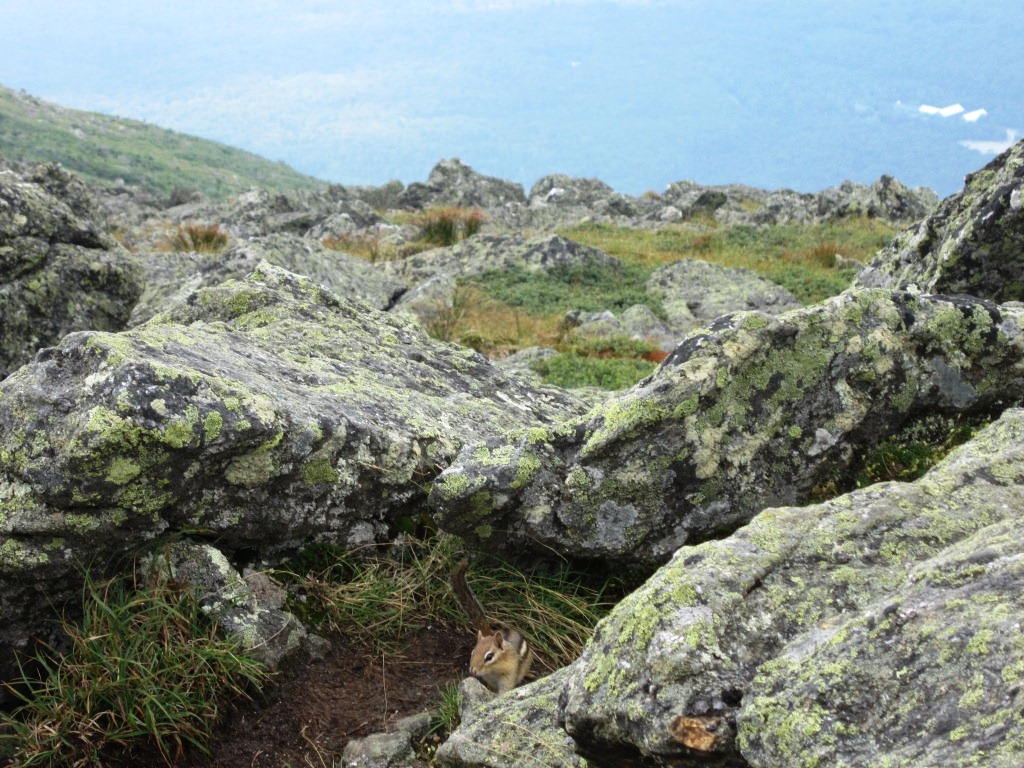 From there I got back to Crawford Path, and took the loop over the two summits of Mt. Monroe. By then the fog had kind of cleared and I had great views (left). On the top of Monroe I made a chipmunk friend (right). I found it very strange to see a chipmunk here, far from any natural food source. In lieu of natural food I thought that he would enjoy a few peanuts and he was indeed very appreciative. 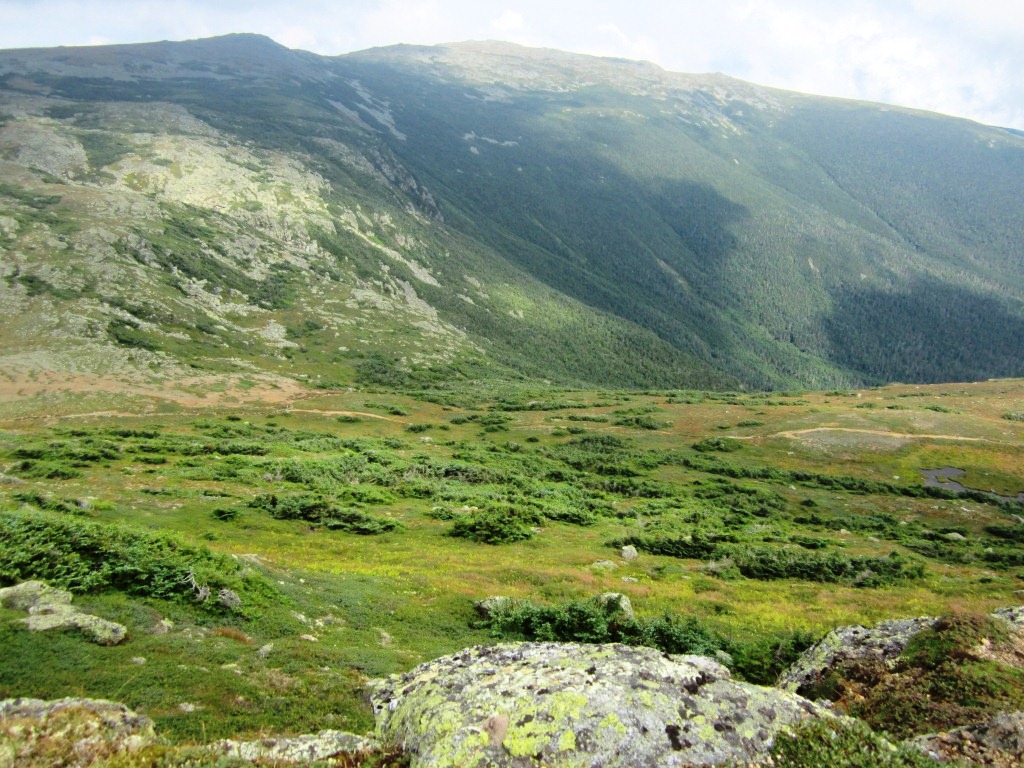 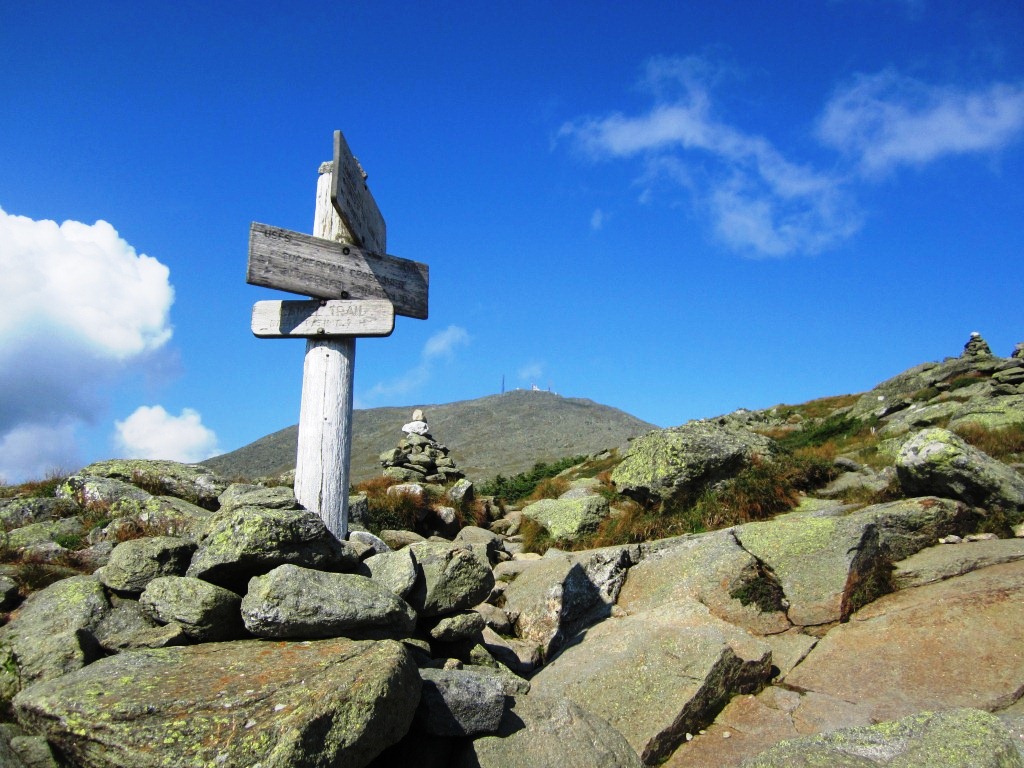 I headed down from Monroe, looking down on the Crawford Path to an almost pastoral scene (left). I read in a recent AMC magazine issue that this is an area of special interest for alpine tundra biodiversity. I arrived at the Lakes of the Clouds hut, and the logical next thing was to go down, but it was only 4:30 pm and I didn't want to go down. I was in my above-treeline mindset and in no hurry to go back to the real world. Suddenly the clouds parted and I got splashed with sunshine so I made up my mind. I would do a triangle above treeline by way of the Camel Trail, the Davis Path, and the Tuckerman Cut-off. I had never done the Camel Trail or the Tuckerman Cut-off so this would allow me to redline these trails (the latest AMC sport is to "redline" - that is, hike - all the trails in the White Mountains). So I got back on the Crawford Path up to Mt. Washington but then took the first right on the Camel Trail (right). 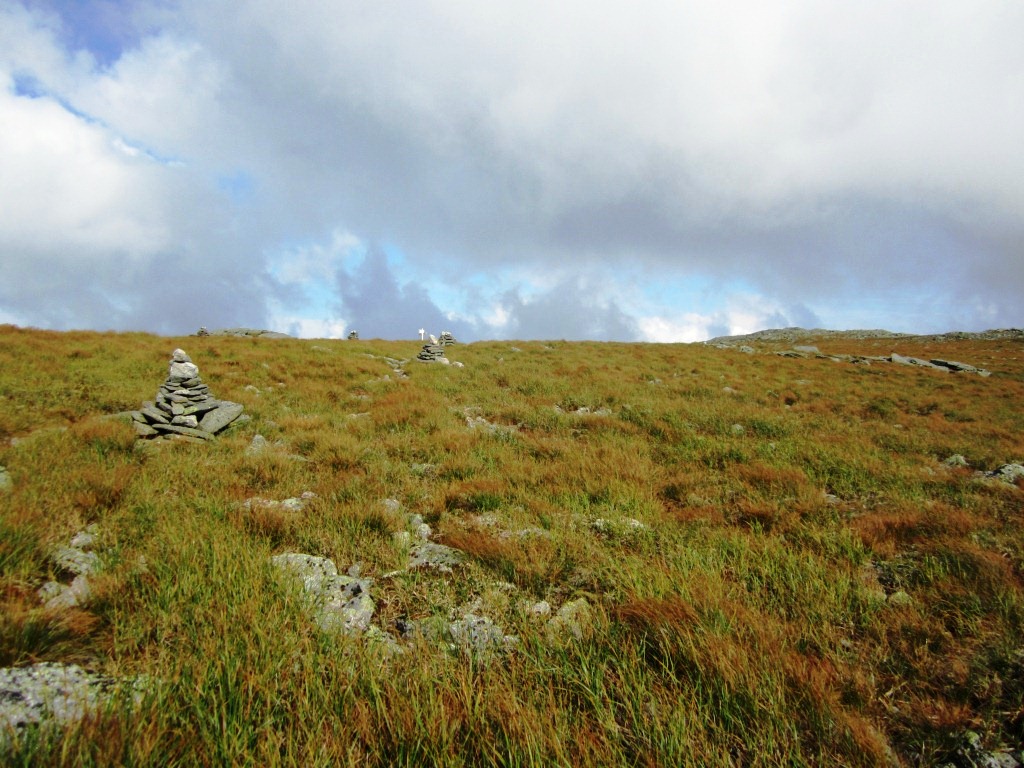 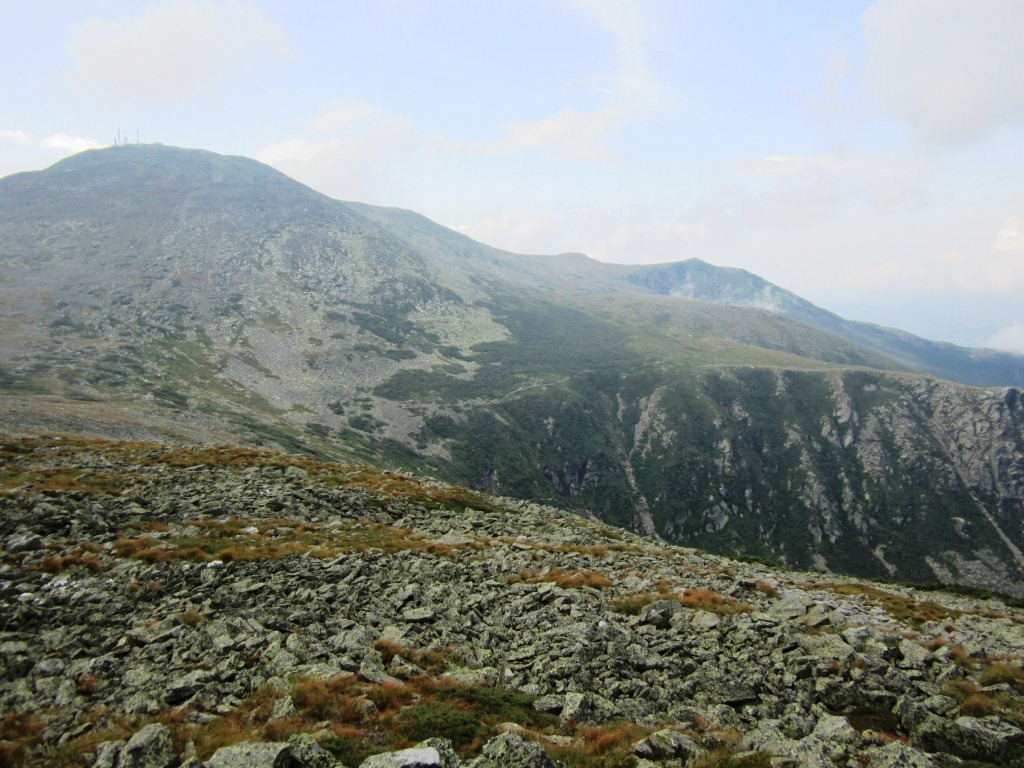 And then I realized something. Everybody who arrives above treeline at Lake of the Clouds wants to go to Mt. Washington, Which means that all the other trails meandering over the large above-treeline plateau are deserted. And yet they're far more beautiful than the arrival into the Mt. Washington parking lot. The Camel Trail wandered into the horizon (left), with regularly spaced cairns to assist the fog-bound hiker. I eventually got to the Davis Path, and although that was not my initial plan I turned to the right on the Davis Path to get a view of Tuckerman Ravine. I wasn't that successful. The picture at right is as close as I got. 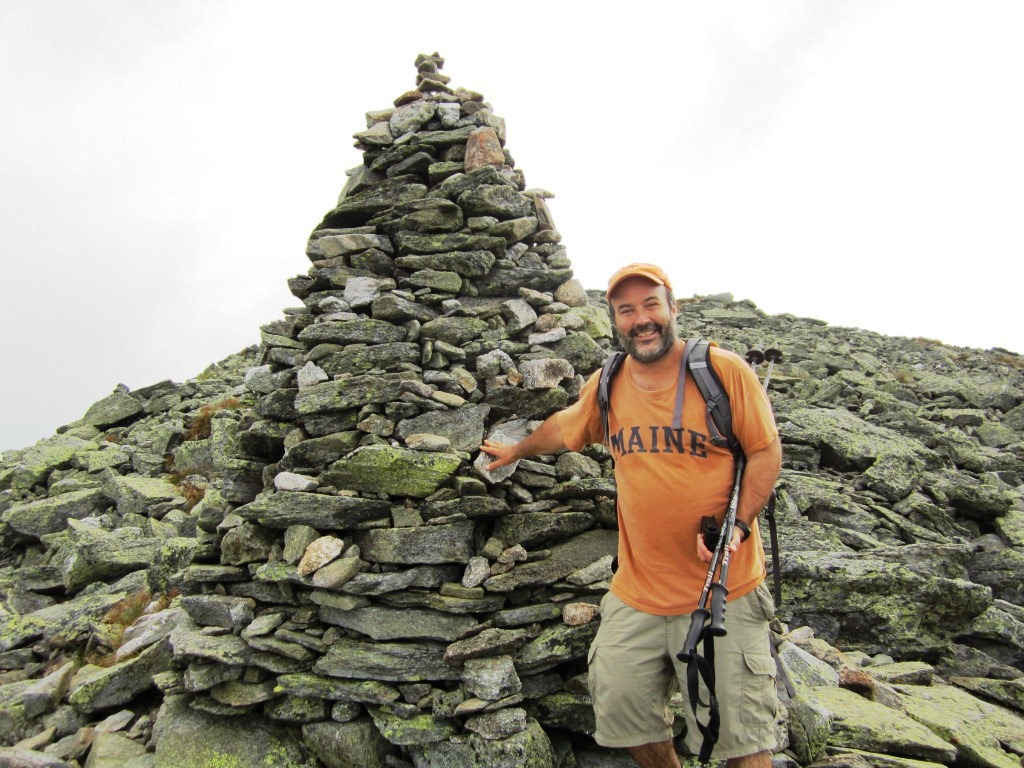 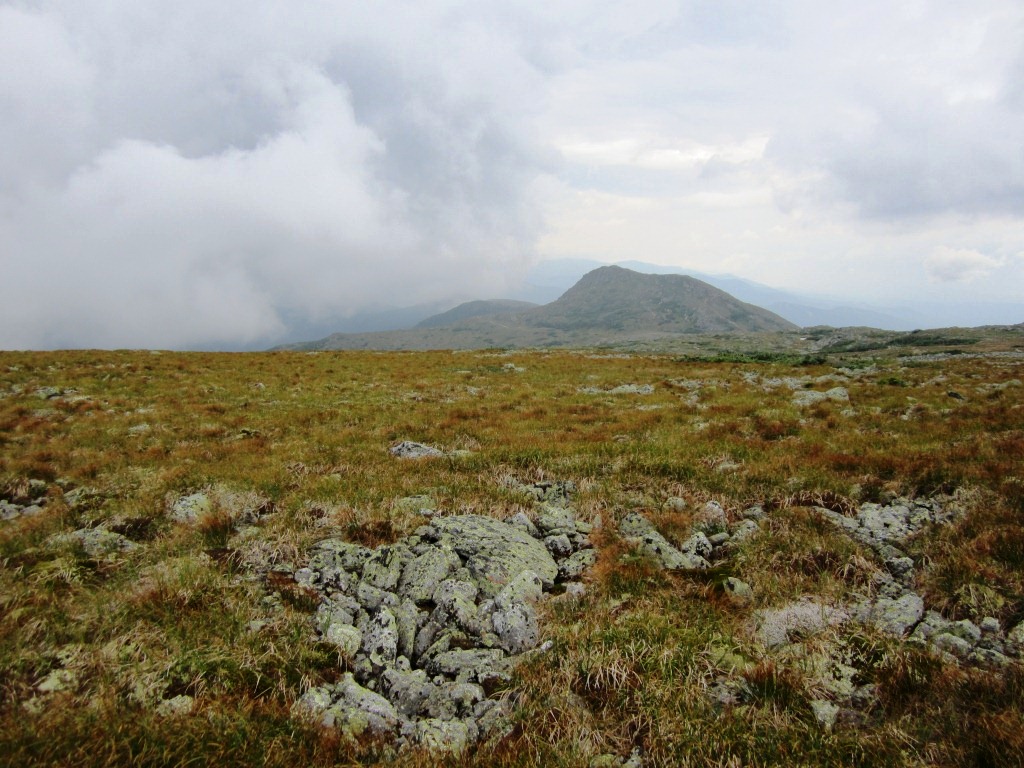 While I was doing all this exploration a backpacker emerged on the Davis Path. He was a kid from Michigan who said he had been in the mountains for 11 days but seemed really confused about where he was and where he was going. We walked together for a while and passed by a monster cairn on the Davis Path (left). I suggested that he come with me to the Lake of the Clouds hut to get information, but he was intent on getting to the top of Mt. Washington that evening so we parted ways at the Lawn Cut-off. At that point the fog was beginning to roll in again and it was getting late so I cut short my triangle and returned by the Camel Trail back to Lake of the Clouds. One more nice view of Mt. Monroe (right) and then it was down the Ammonoosuc Ravine Trail to the Base Rd. trailhead, where I hitched a ride from a nice Dutch family to get back to Bretton Woods.