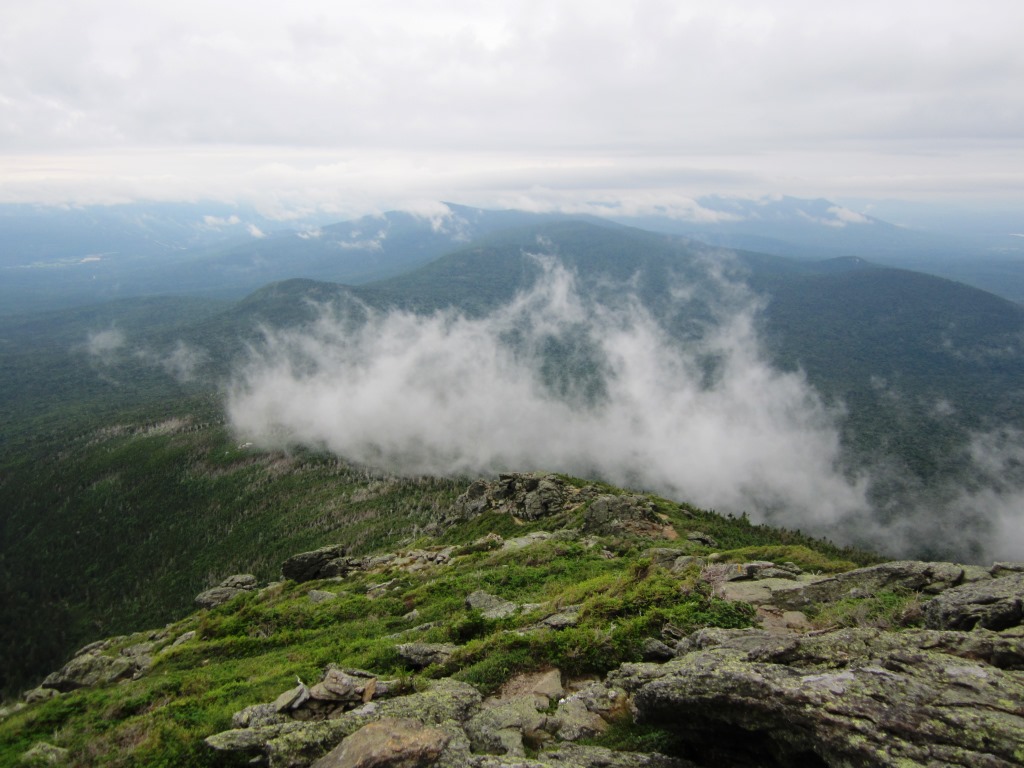 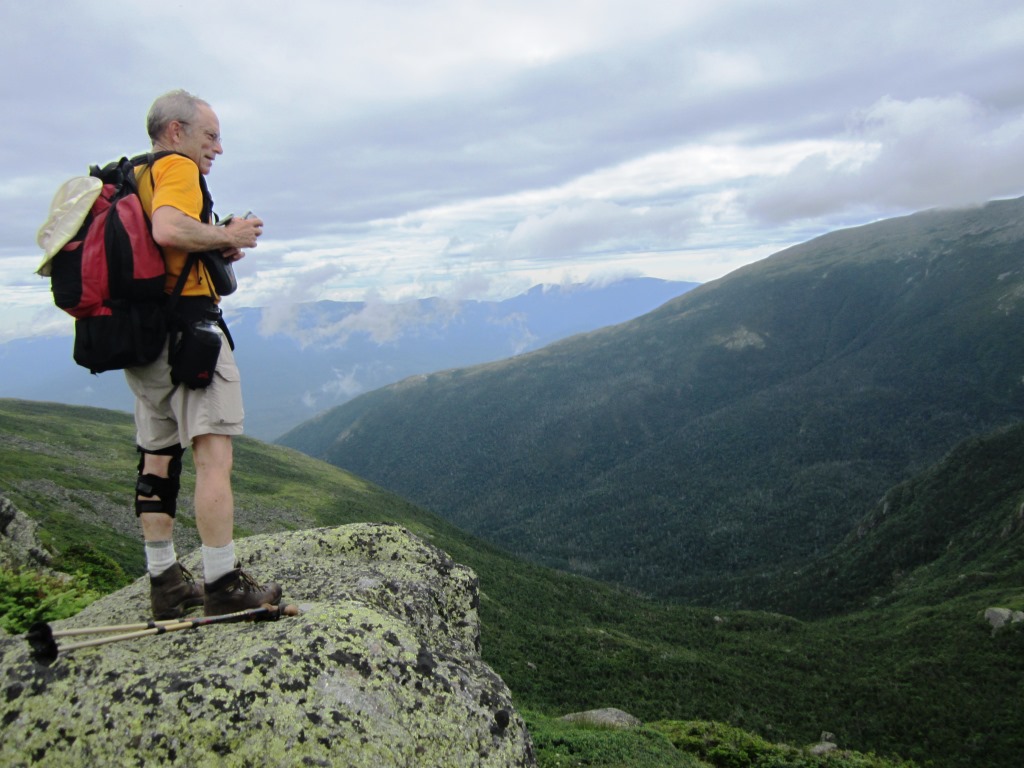 Spaulding Lake, at the head of the Great Gulf, can be reached by a 6.5 mile hike from Route 16 up the Great Gulf Trail. Trail. Peter Wyatt and I made it significantly more difficult by going up the Presidentials ridge by the Caps Ridge Trail, dropping into the Gulf by the Sphinx Trail, and then climbing the Gulf headwall by the Great Gulf Trail to Mt. Washington before dropping down the Ammonoosuc Ravine Trail. This is a hike I had wanted to do for a long time. For the past three years I was the caretaker of the Mt. Clay Loop for the AMC, and on my many climbs up Mt. Clay I could see tiny Spaulding Lake nestled at the bottom of the Great Gulf. I had to go there. Peter's wife Nancy dropped us off in Jefferson Notch and we climbed Caps Ridge with fog waltzing around us (left). We got to the top of the ridge and headed south on the Gulfside Trail toward Sphinx Col, with good views into the Gulf (right). 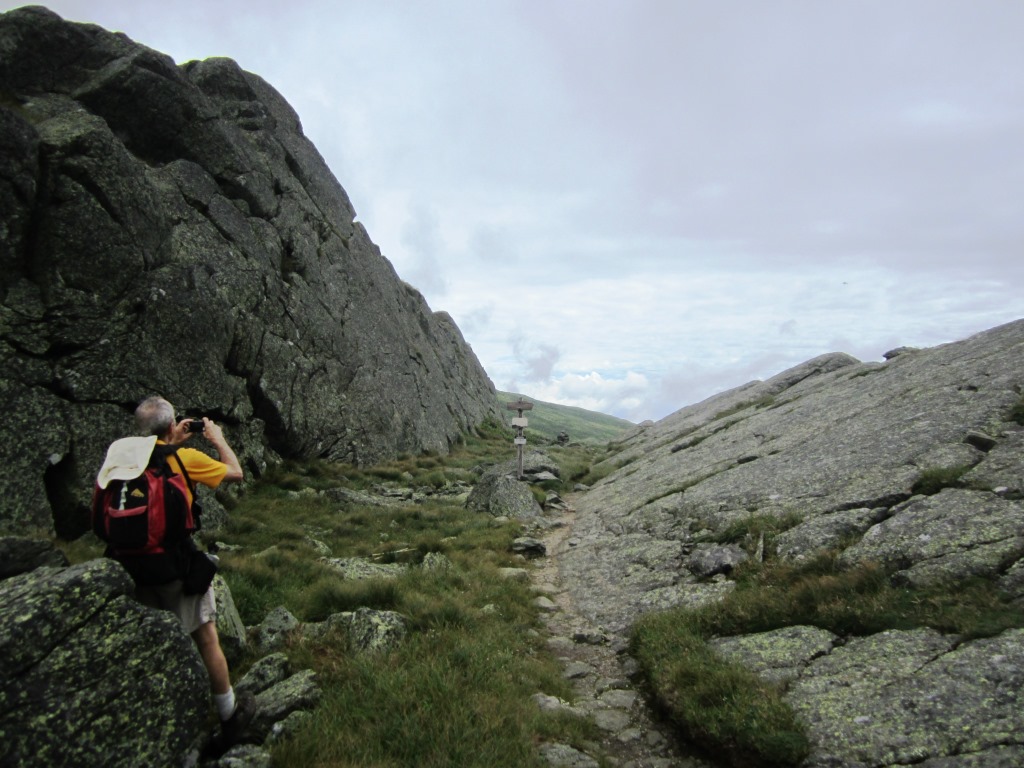 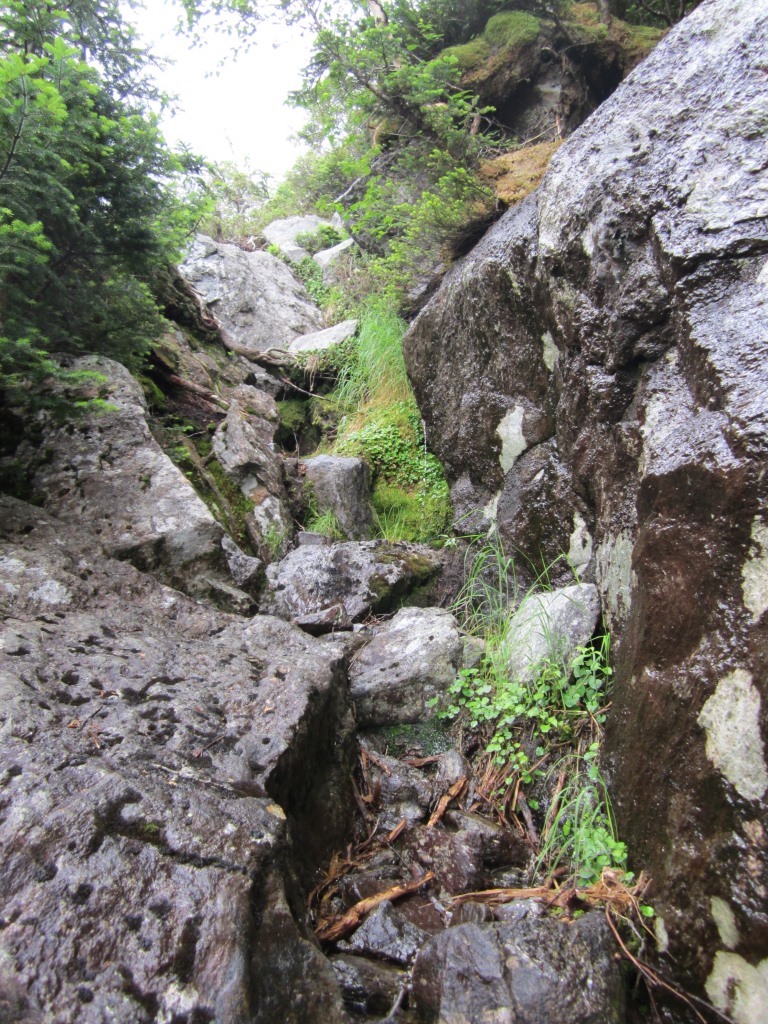 I had been to Sphinx Col many times for my Mt. Clay Loop maintenance duties for the AMC but had never gone on the Sphinx Trail, so I was now redlining. The drop from the Col takes you through impressive rock walls (left) with the usual wilderness sign warning you that if you venture any further you can expect to get lost. The Sphinx Trail is advertised in the guide as "very steep and rough" and indeed it is (right). 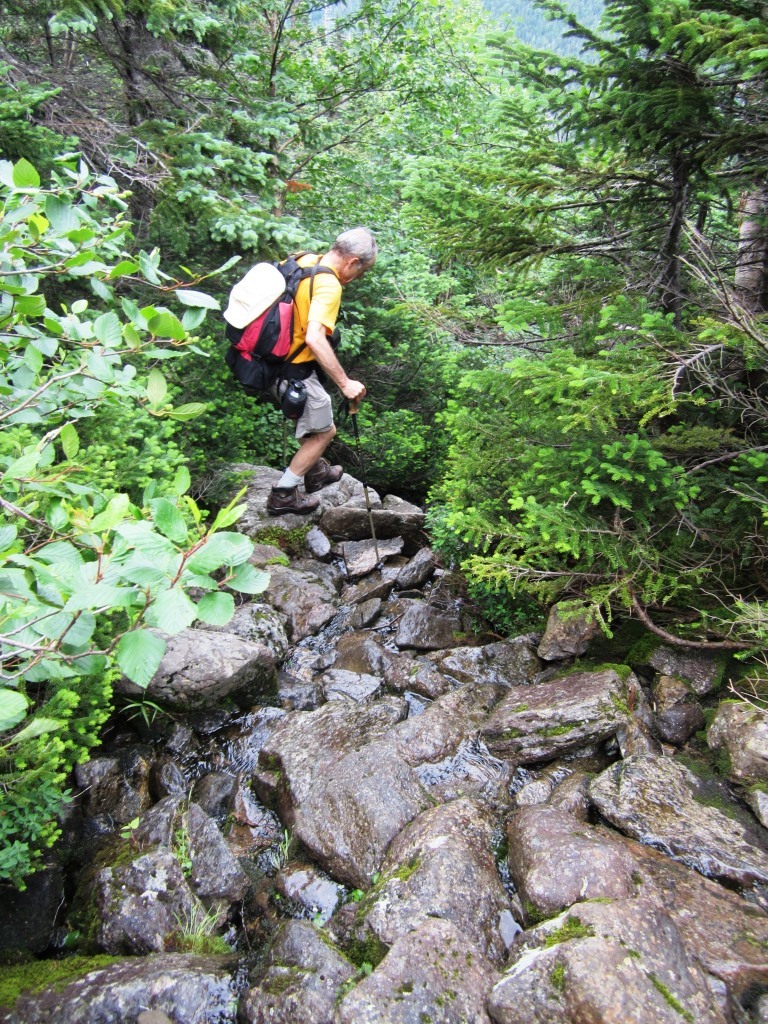 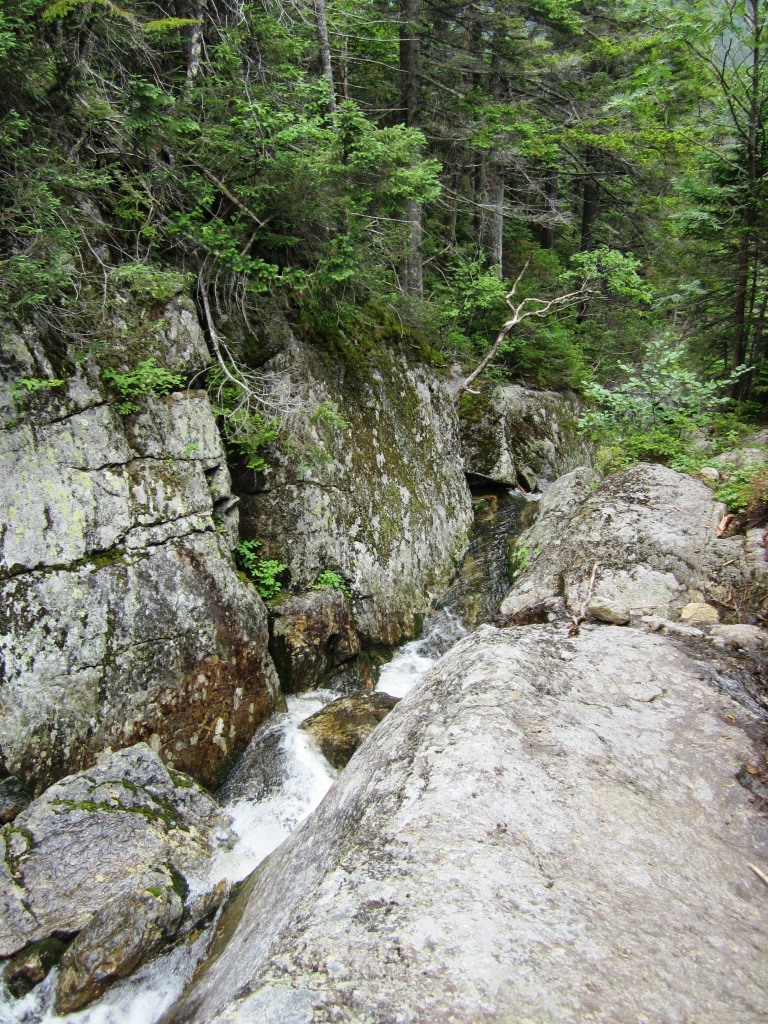 The Sphinx Trail follows a brook the whole way but is most of the time in the brook - the brook is the trail (left). This made for slippery situations and a challenge to keep boots dry. At some point I just gave up on the latter. You are one with the brook as it flows through narrow flumes (right) and waterfalls (bottom left). 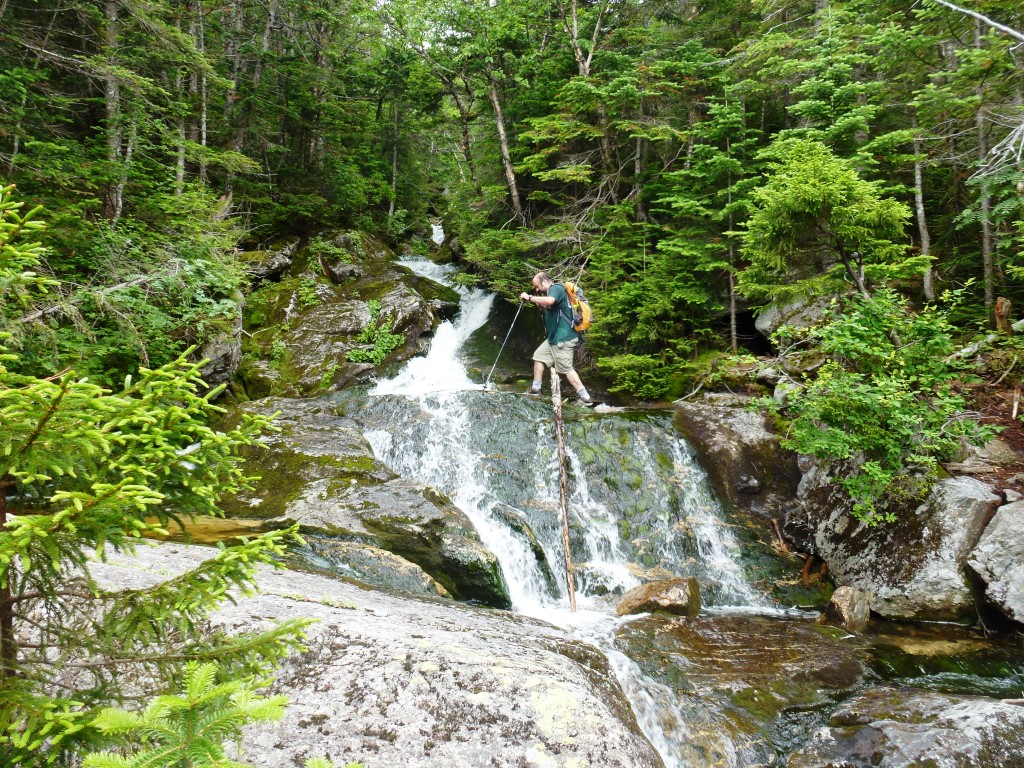 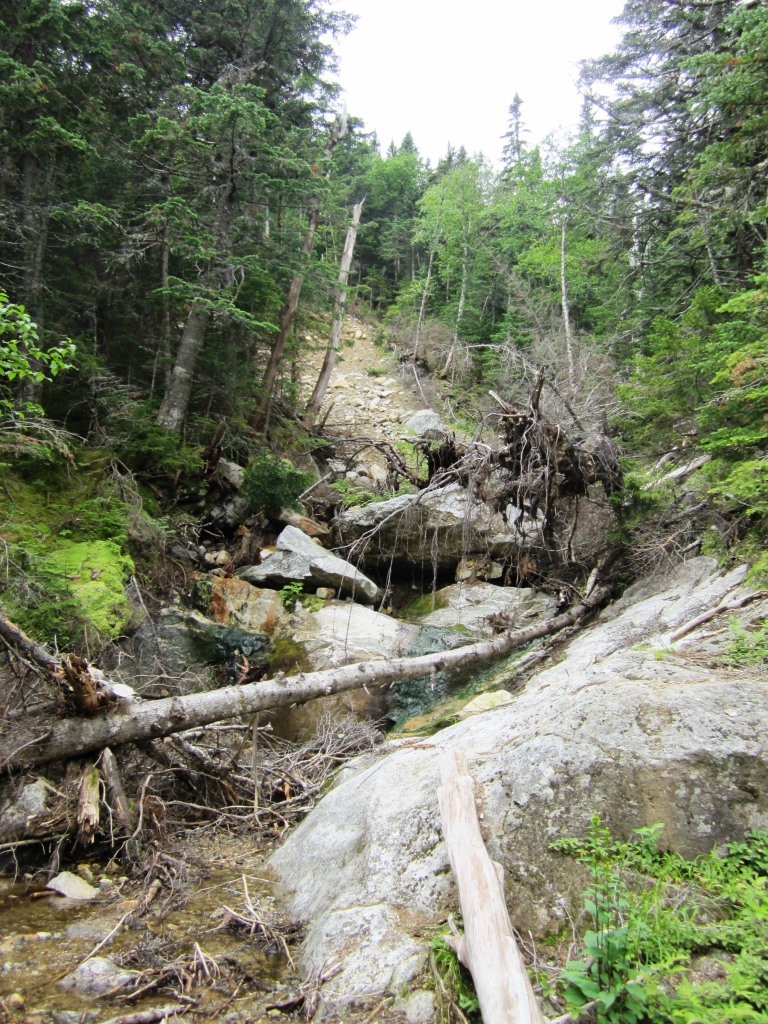 This being a wilderness area there were hardly any markings and the trail was merciless, in true White Mountains style ("what? They want us to go through this?"). All boulder hopping on slippery rocks. At some point we crossed a massive slide, legacy of hurricane Irene (right). 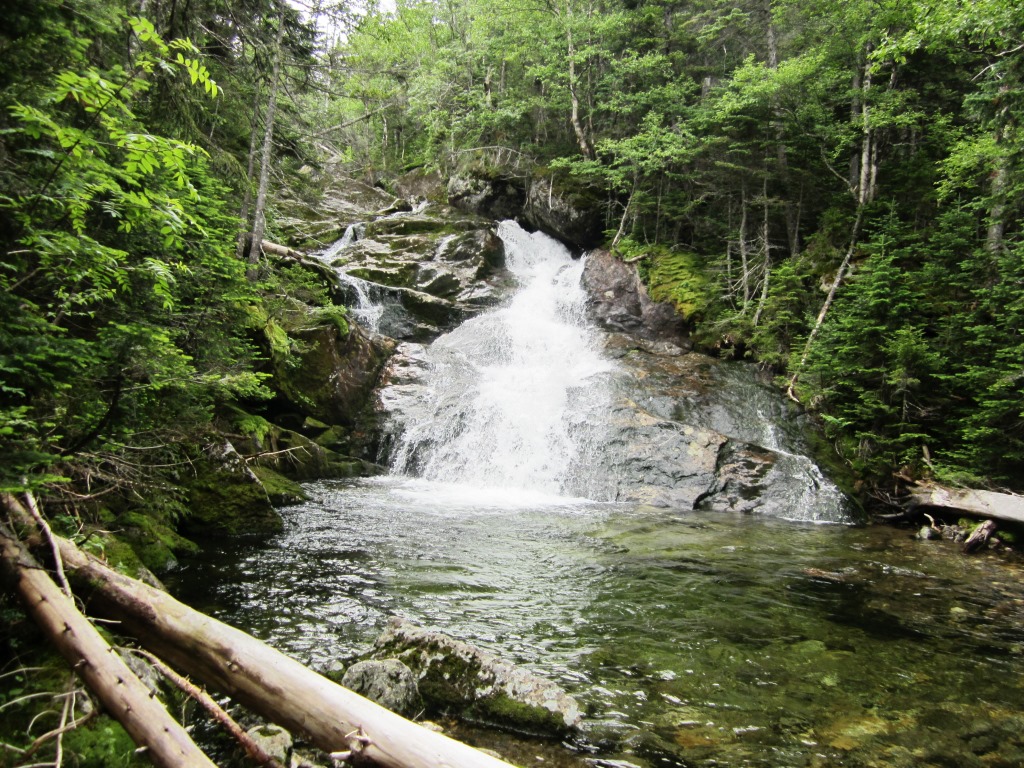 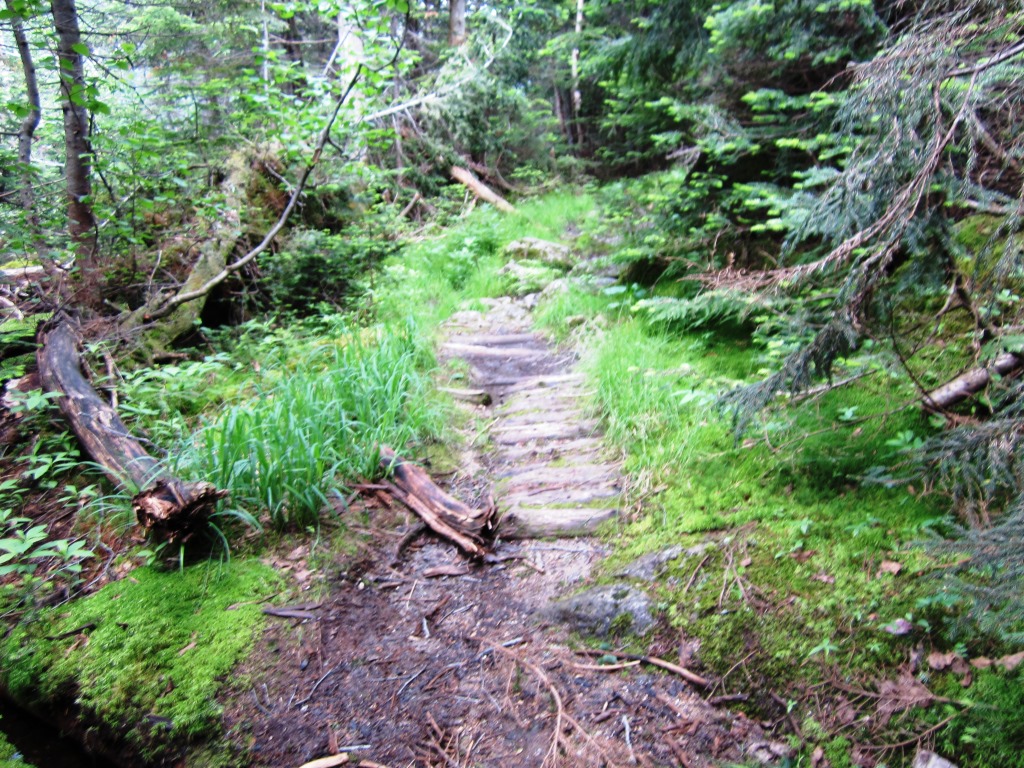 And then all of a sudden the trail became peaceful, a walk in the woods. We were getting to the junction of the Great Gulf Trail and the flat bottom of the valley. We reached the junction and the broad Peabody River. I stopped to wring the water out of my socks and we proceeded up the Great Gulf Trail, past the lovely Wetainoo Cascade (left). At that point we met a father and his two kids (first people we had seen all day), who had come down the Great Gulf Trail the day before and were planning to head up the Sphinx. The kids were tough and in good spirits. From there we continued up the Great Gulf Trail, which was tougher than I would have expected for staying down in the valley. At some point I noticed some trailsmanship with old logs placed across a muddy area (right) and that made me notice that nowhere else since the Sphinx Col had there been any indication of such effort at trailwork. 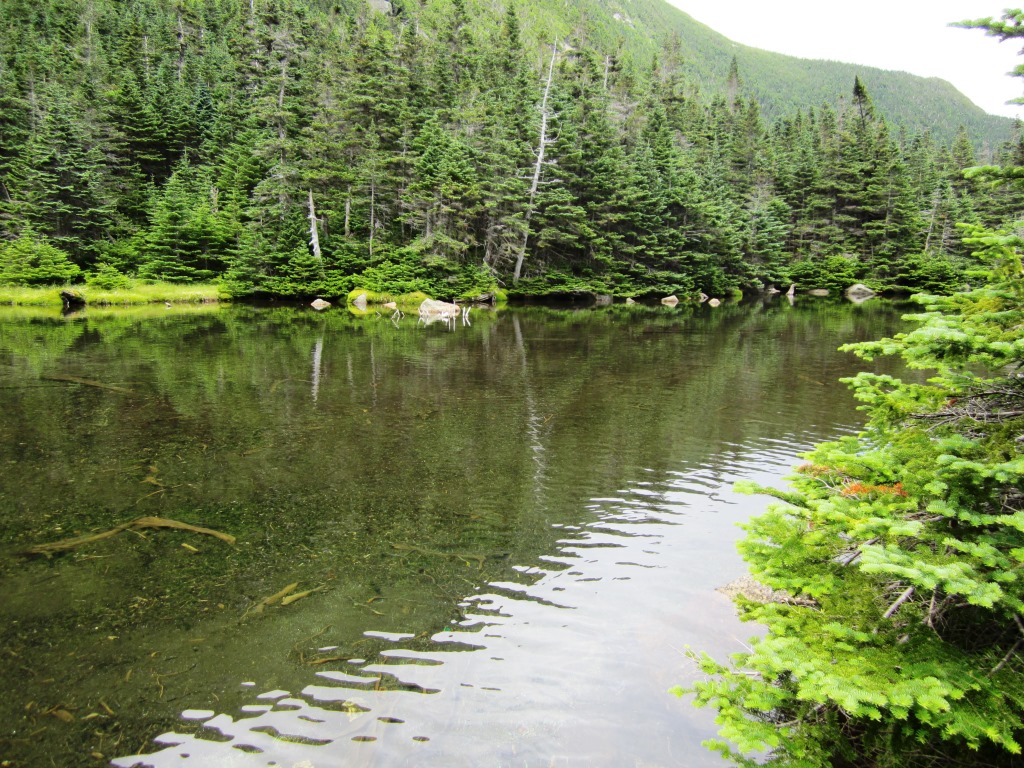 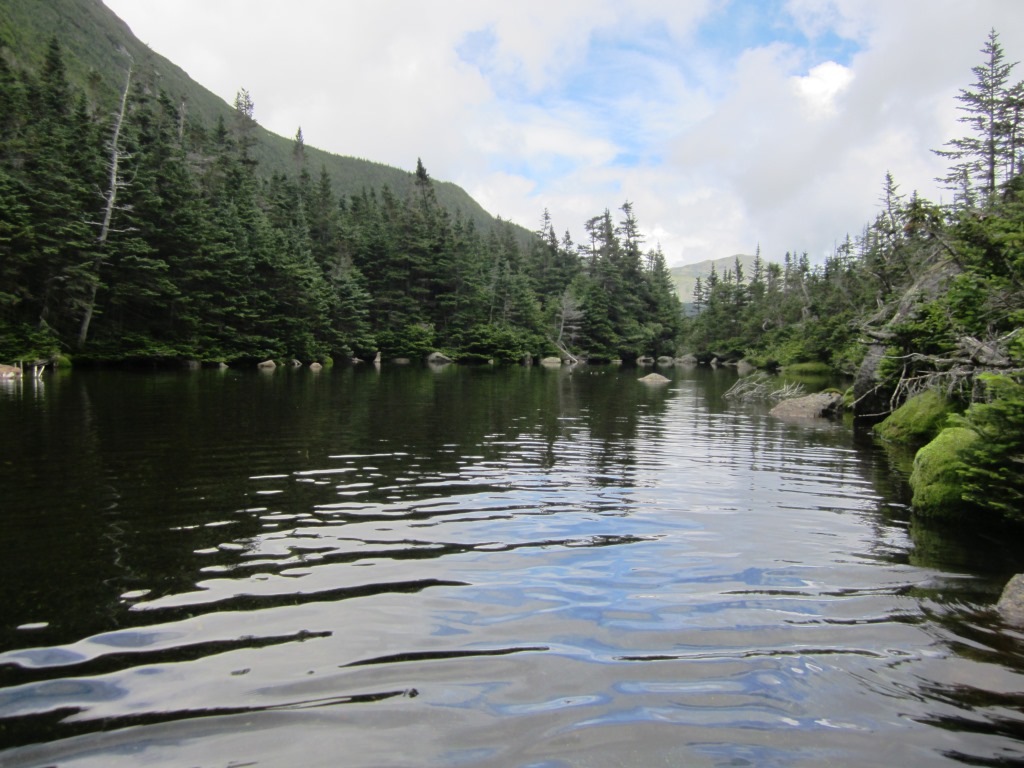 We got in this manner to Spaulding Lake, the object of our quest (left). It was a shallow lake, 2-3 ft deep at most, but very clear. We tried to go for a dip but the water was very cold. Peter managed to give himself a body splash and commented that it felt good. I went up to my thighs and decided this was enough. From that point I took a picture of the length of the lake such as it is (right). 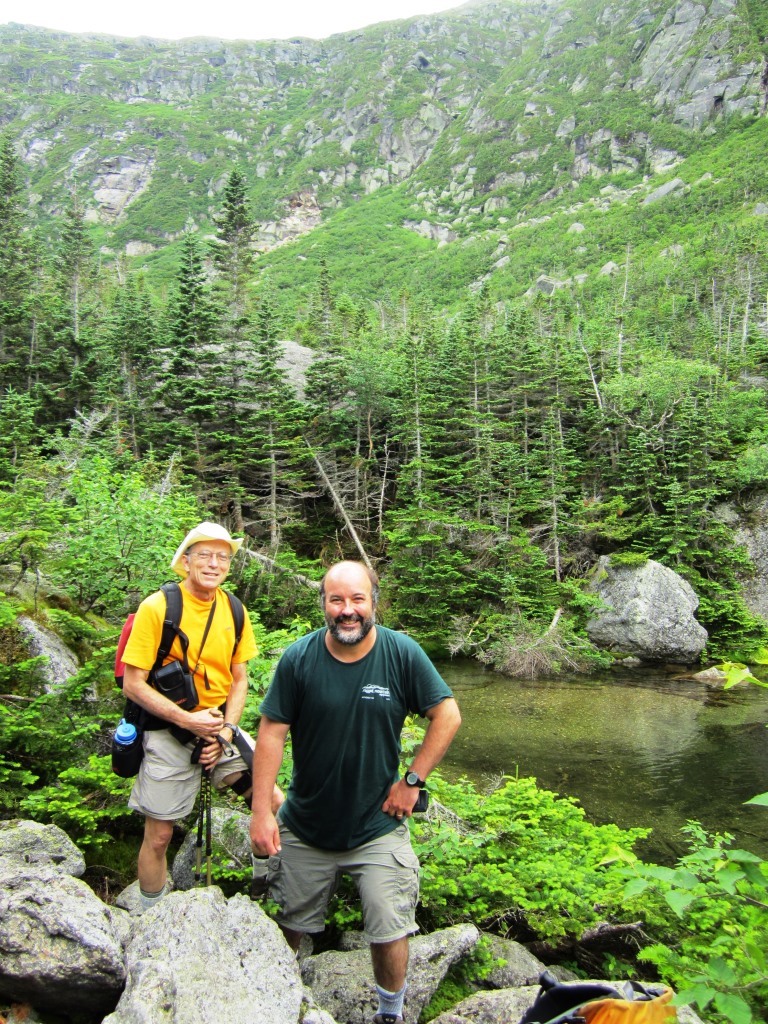 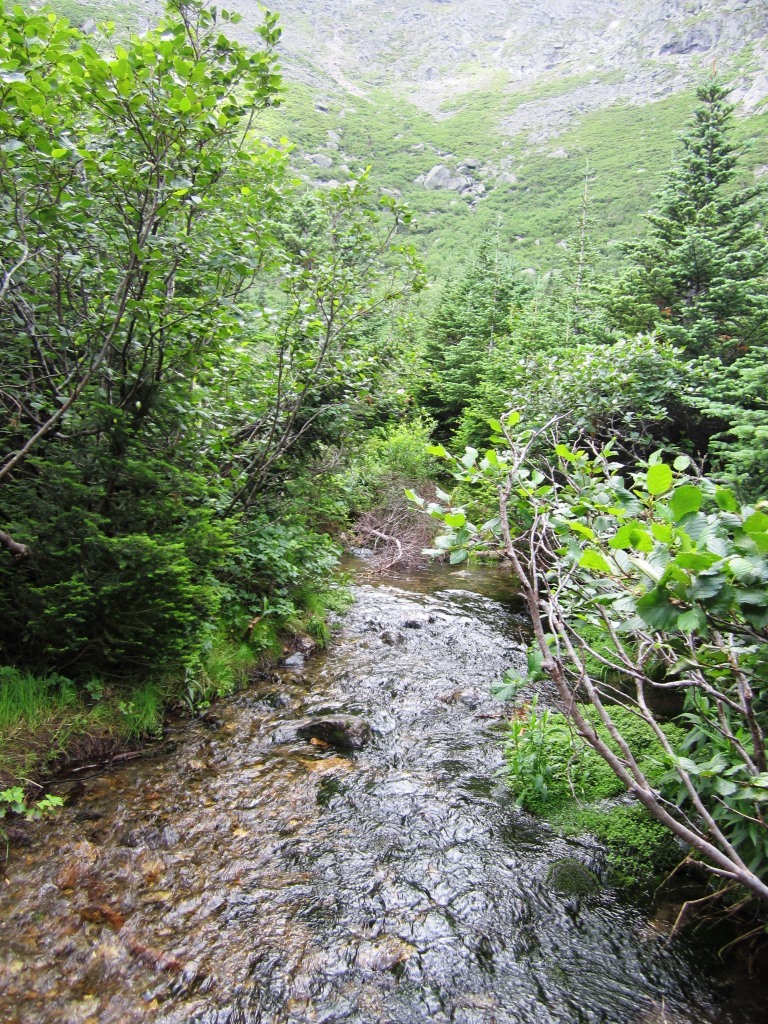 At that point the second person we saw all day walked by, and took our picture (left). He was an AMC employee who hiked up the Great Gulf every two weeks to collect a water quality sample upstream of Spaulding Lake. I asked him what the data showed but he had no idea. We continued on the Great Gulf Trail, which was now increasingly wet and merged with the headwaters of the Peabody River (right - this IS the trail). I totally gave up again on the notion of dry feet and slogged my way through the stream/trail. 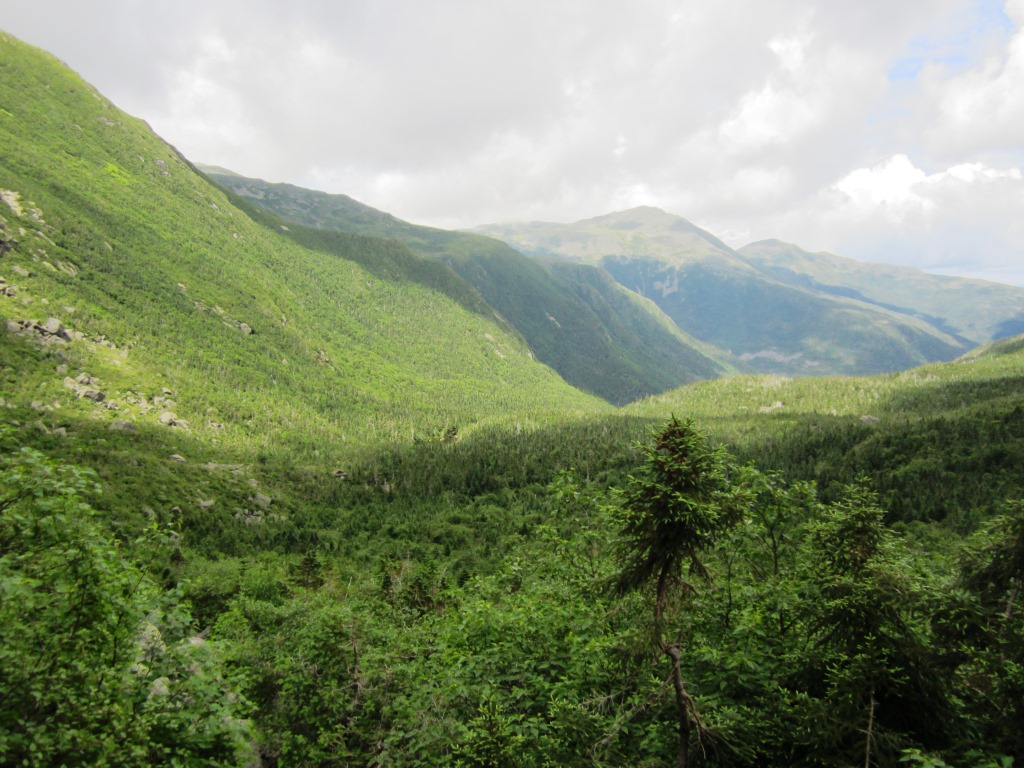 As the trail began its climb up the headwall the vegetation shrunk and we had great views looking back at the valley (left). The trail continued its climb in the river and became increasingly difficult to follow. We passed by/in beautiful cascades (right - trail goes right up through the cascade). Many times we had no idea if we were on the trail or not - the guide is very vague about the location of the trail, and says that because of frequent avalanches the location changes all of the time. It was extremely steep and a hands-and-feet job almost all the way. 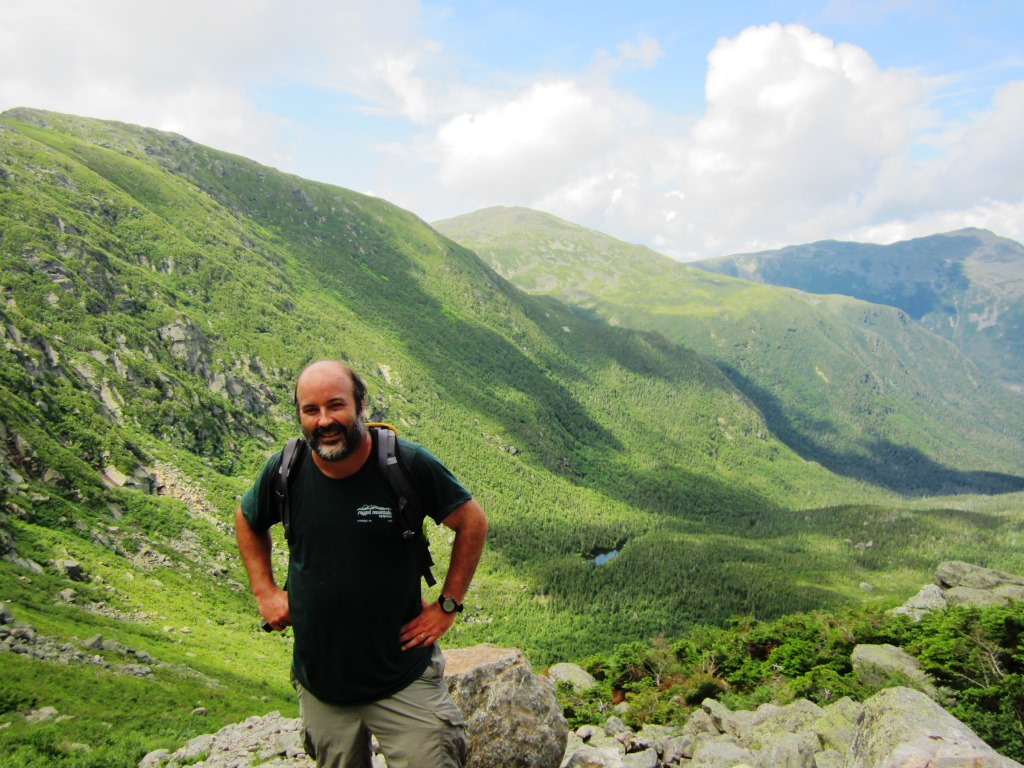 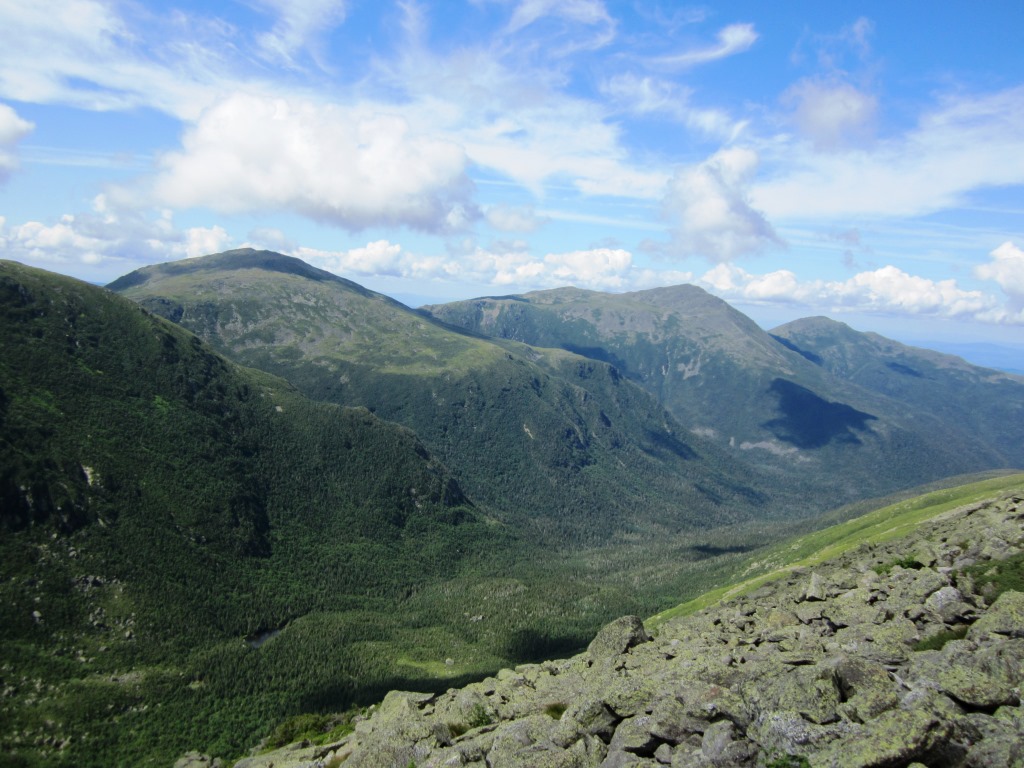 At 5,000 feet the river went underground and became just a gurgling sound. This was the first time since Sphinx Col that we didn't have the sound of rushing water nearby. There were no trail markings ahead of us - we were on our own. But the only way you could go was up, through the usual jumble of boulders with no way apparently better than others, so we just went off on our separate ways with the rim at 5,900 feet in sight. It felt nice to be on this impossibly steep trail (left). When you're walking on the Presidential ridge you look at the Gulf headwall and you think "how could there possibly be a trail out there?" but here we were - though indeed not on a trail. As we kept climbing the skies increasingly cleared and we were treated to excellent views of the valley (right) and of the famous Mt. Clay (below left). 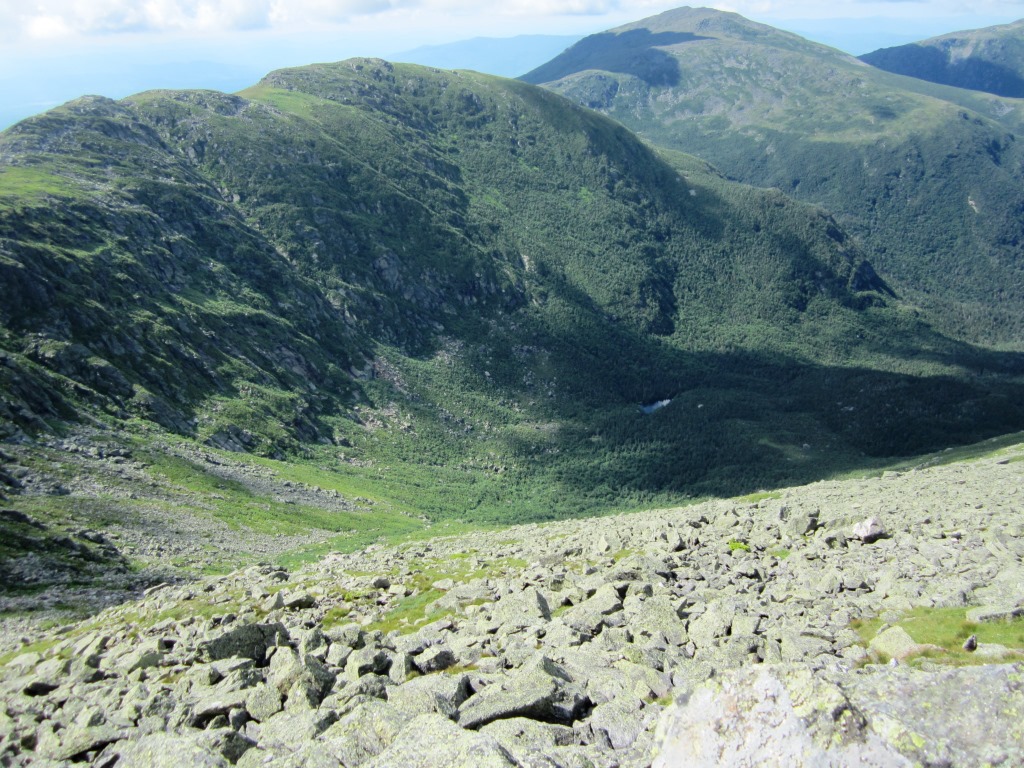 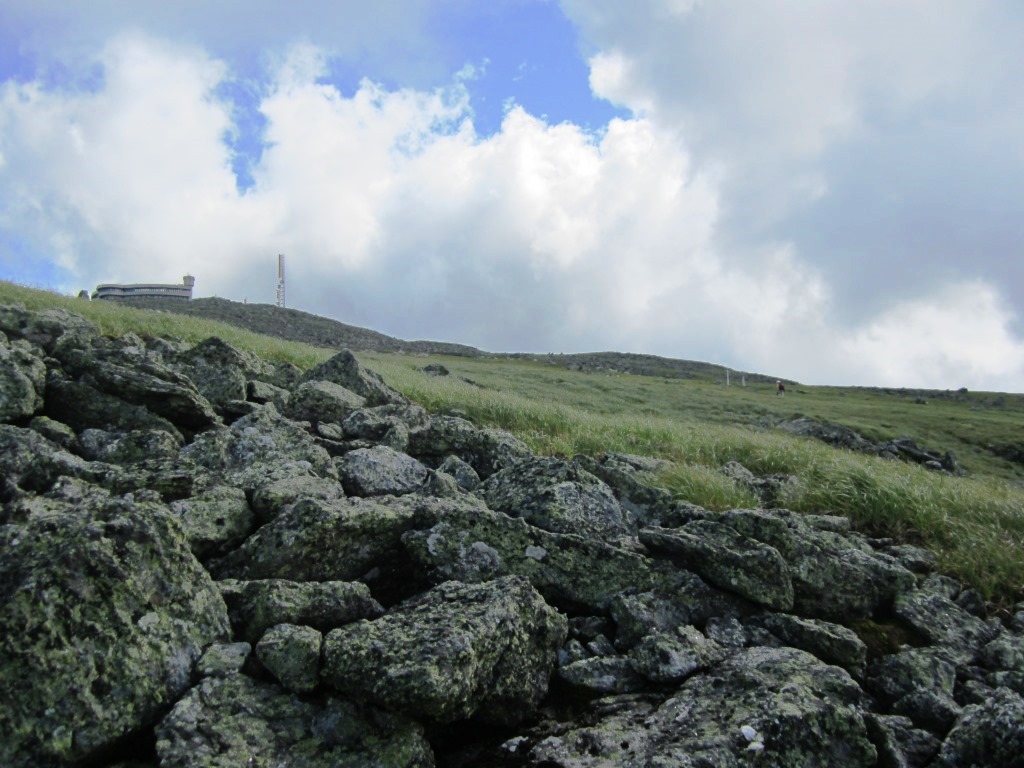 As I mentioned in previous hike descriptions, the top of Mt. Clay is about the only place from which you can see Spaulding Lake (with exception of the headwall itself) because the ravines are so steep. So it felt really good to have visited it, and we got more than we bargained for with the roughness of the Sphinx and Great Gulf trails. Finally we arrived at the rim and the Mt. Washington Observatory sprung into view (right). I found Peter somewhere else on the rim and we rejoined the Gulfside Trail to take us to the top of Mt. Washington. 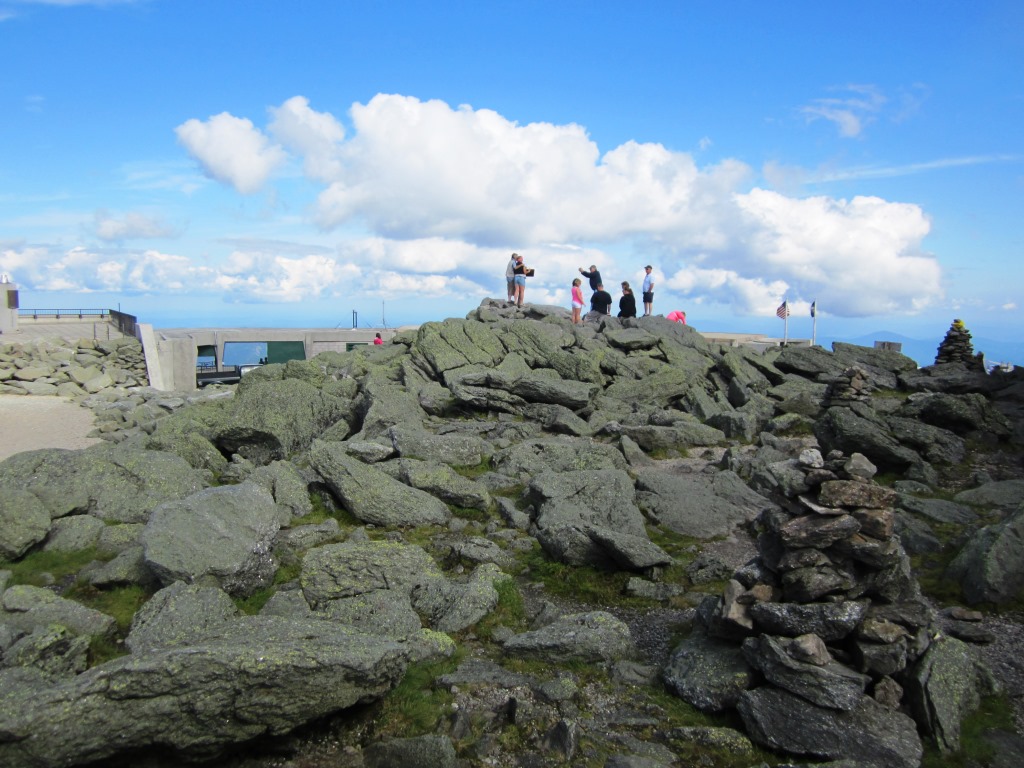 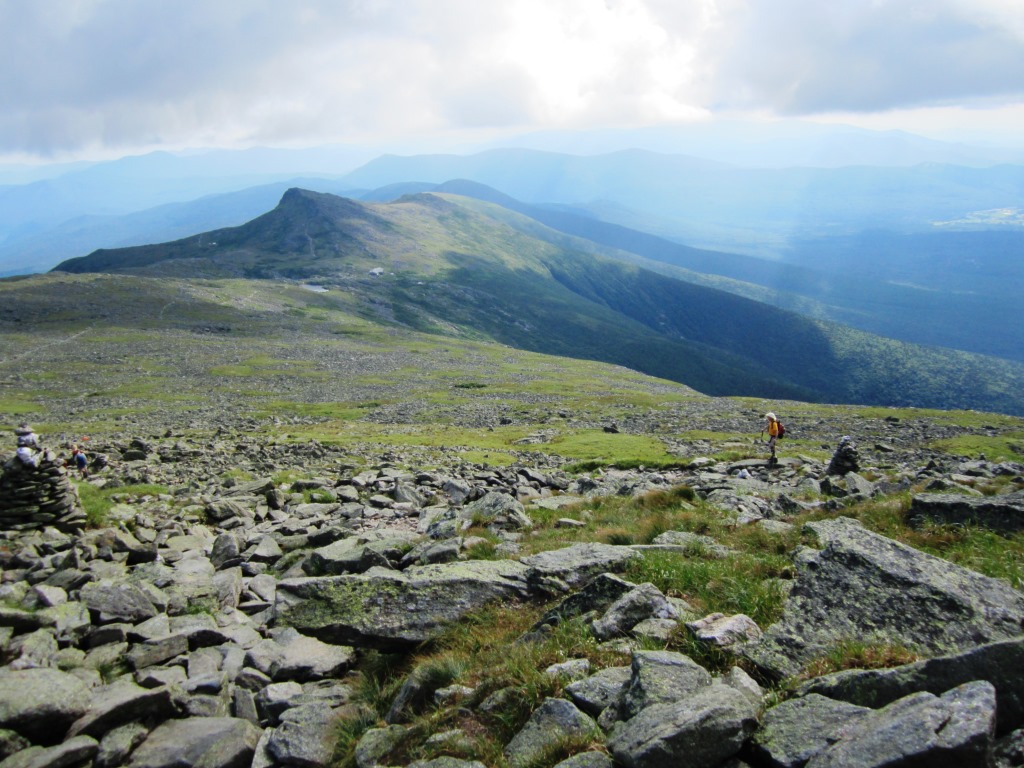 paragrThe top of Mt. Washington is always a culture shock, with crowds of non-hikers discharged by the Cog Railway and the Auto Road (left). We took a bit of time to enjoy the views and then went down the Crawford Path (right) and from there down the Ammonoosuc Ravine Trail. I can usually trot down that steep trail, but by now my legs were shot and so I found myself being slow and deliberate. In any case, that got us out to the Base Road where Peter called Nancy and she came to get us. What a hike! aph