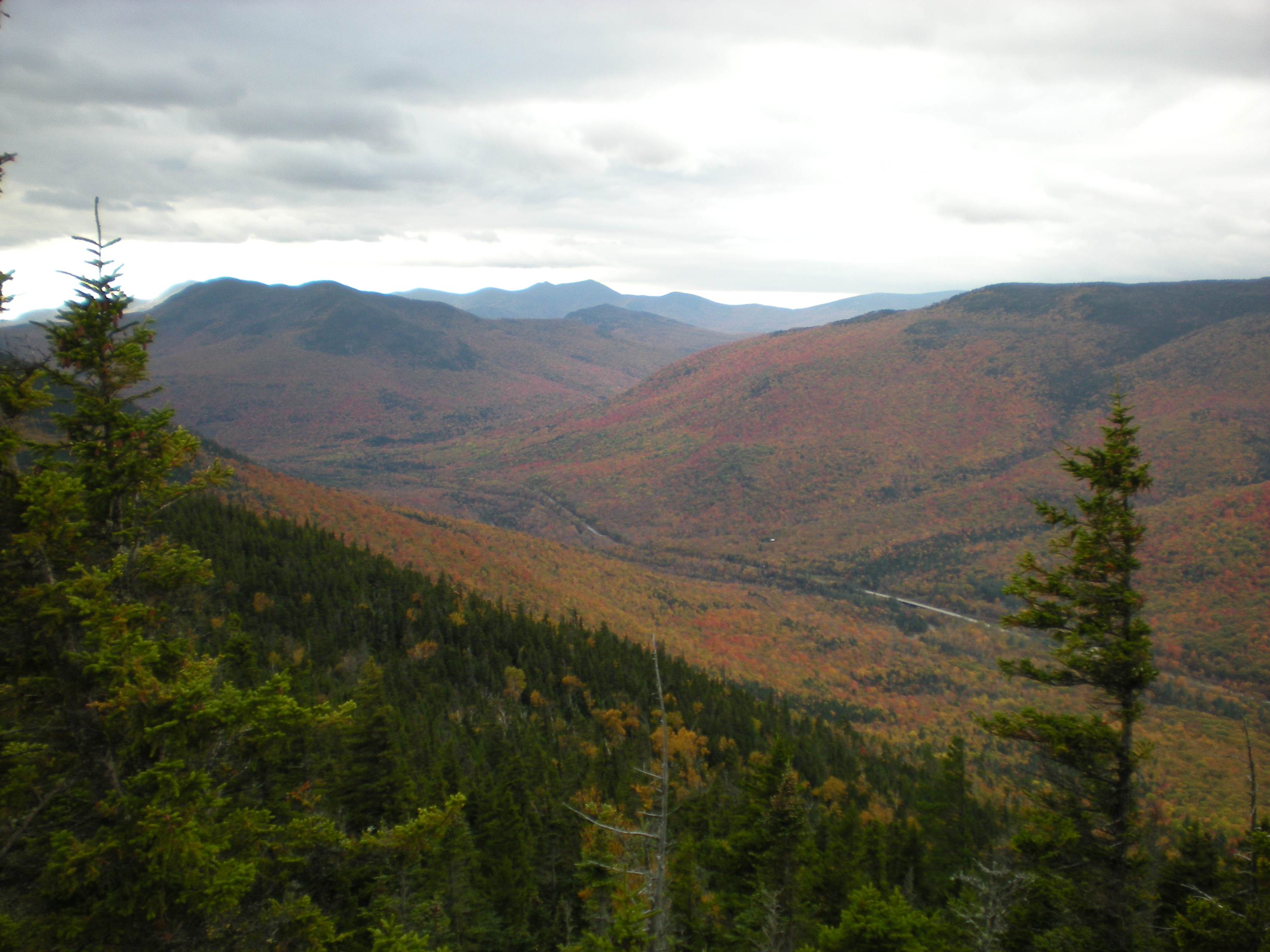 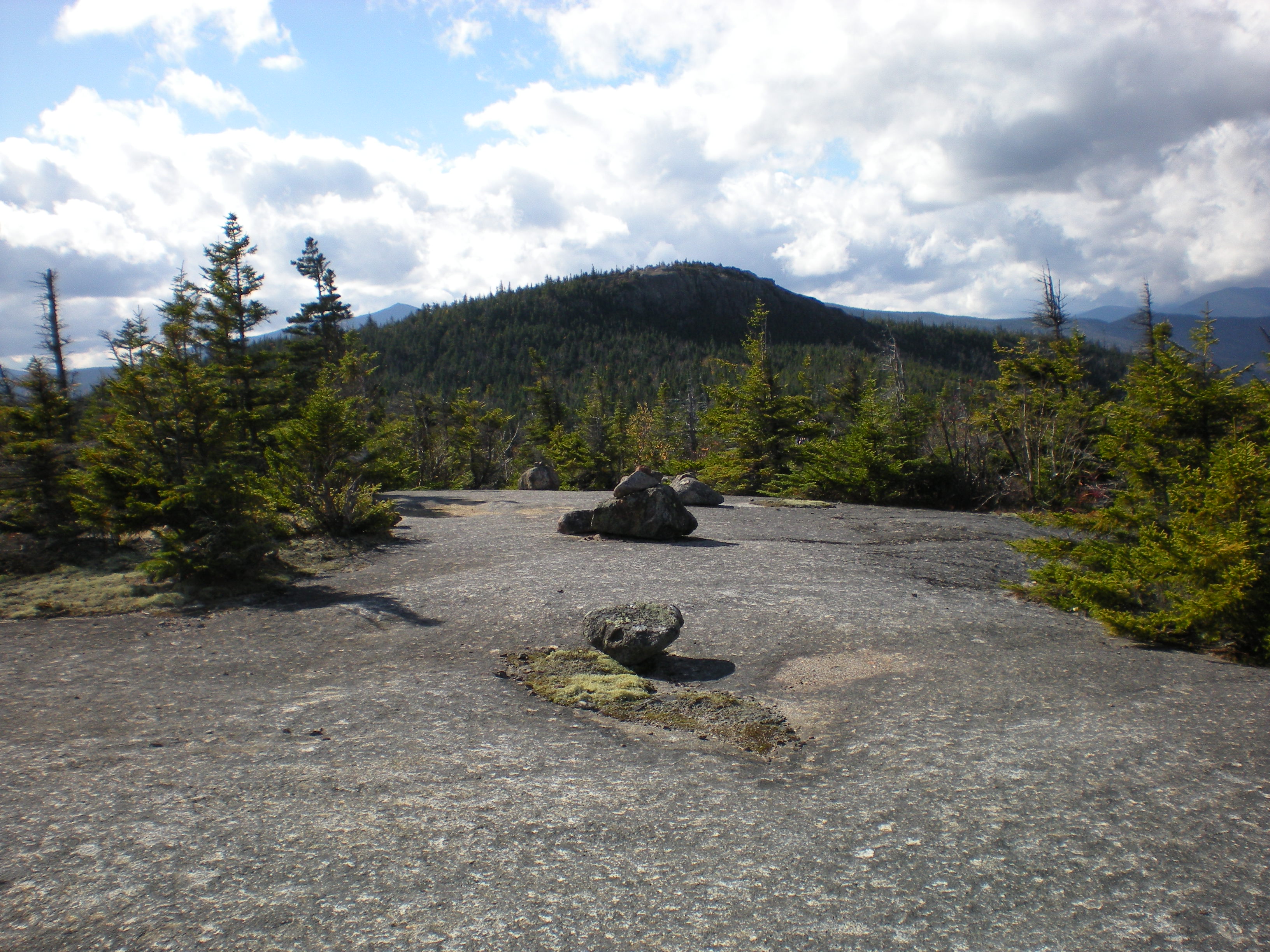 Stairs Mountain is a well-kept secret of the Whites. It doesn't qualify for the 4,000 footer club and it's too long a hike to be classified as "moderate" in the guidebooks. But it's a great destination with spectactular views along the Davis Path that follows the Montalban Ridge all the way to Mt. Washington. Roger Gagne and I did it on October 11. By then the colors were already past peak at our Bretton Woods home base, but dropping down 500 ft. on the other side of Crawford Notch meant getting back in the kaleidoscope of colors. A little over an hour into the hike we got to our first overlook of the Saco Valley (left). Soon after the well-advertised (and, as you will see, deservedly so) "moderate" hike to Mt. Crawford diverges left but the Davis Path keeps on going along the Montalban Ridge. It's a beautiful ledgy trail affording frequent views along the way, as this one on the right looking back to Mt. Crawford. 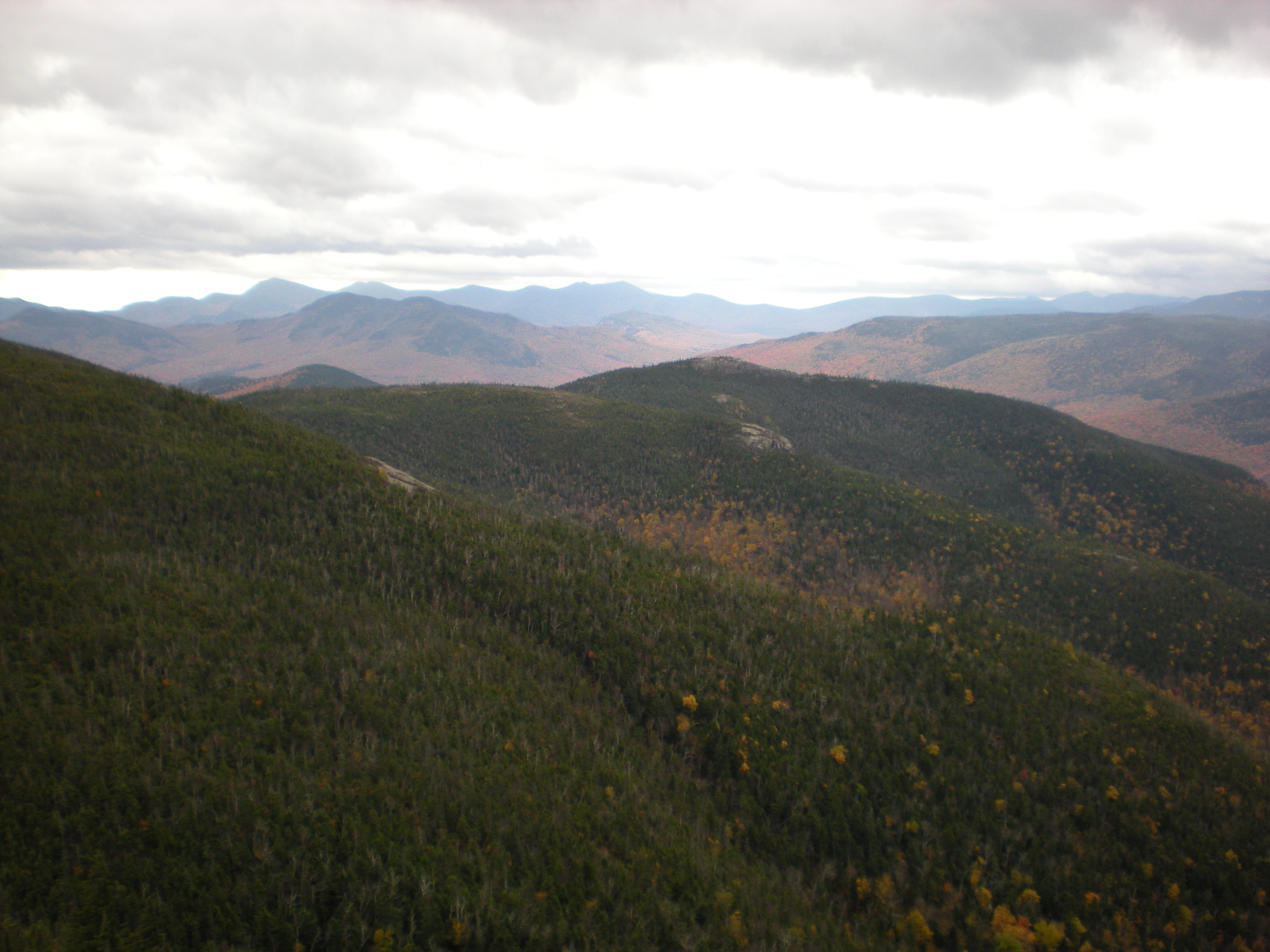 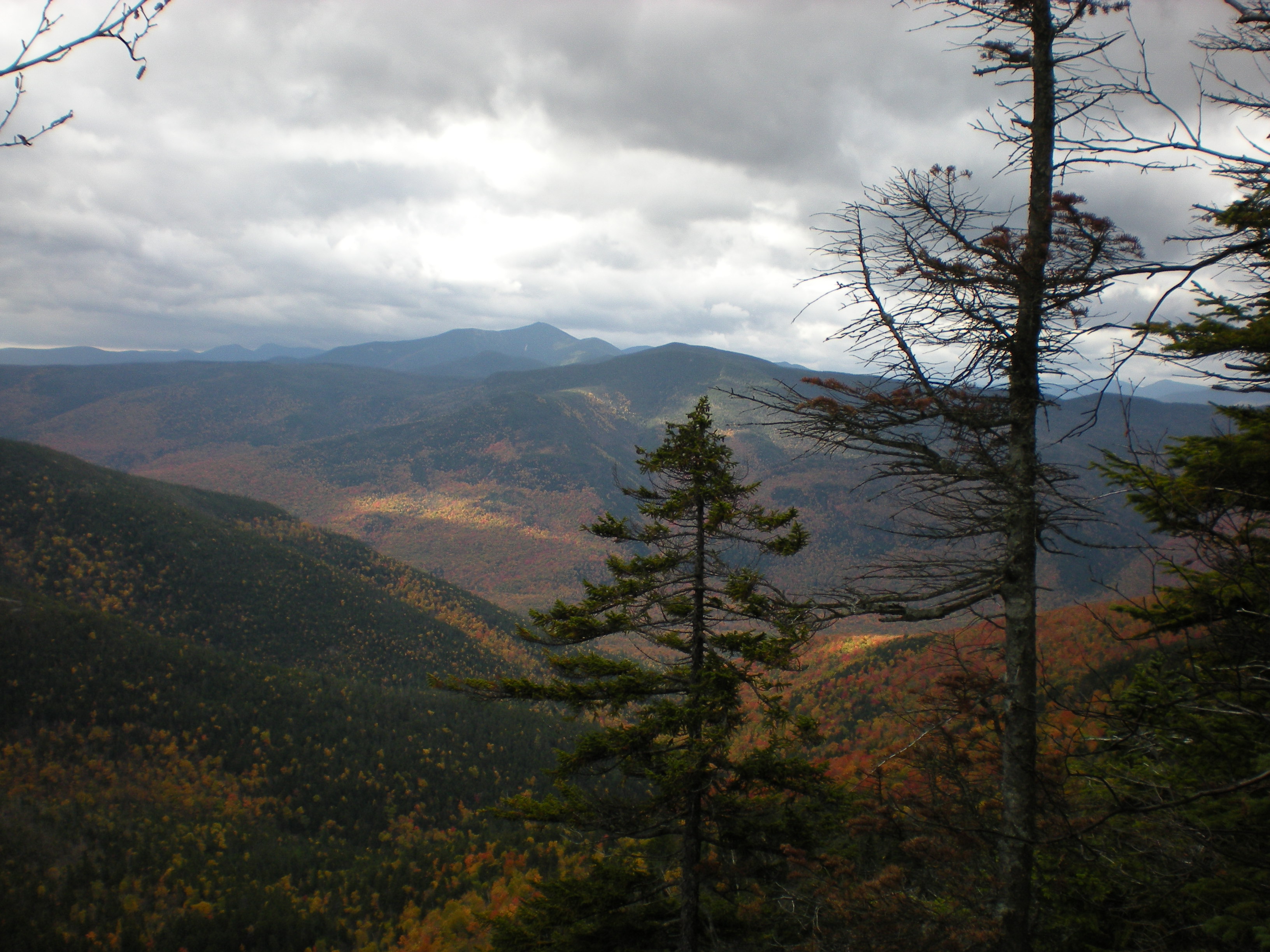 The Davis Path was built for mules by Nathan Davis in the mid-19th century and so it keeps a good moderate grade all along. Montalban Ridge is very interesting with a lot of apparently traillesss ledgy outcrops (left). The path gives many good views from ledges and through the trees (right). We passed the intersection to the Parker Trail which goes up toward Mt. Resolution, went down into Stairs col, and then steeply up Stairs Mountain. Since the trail was built for mules it mercifully zig-zagged up, rather than shooting straight up withour regard for slope as is generally the case in the Whites. 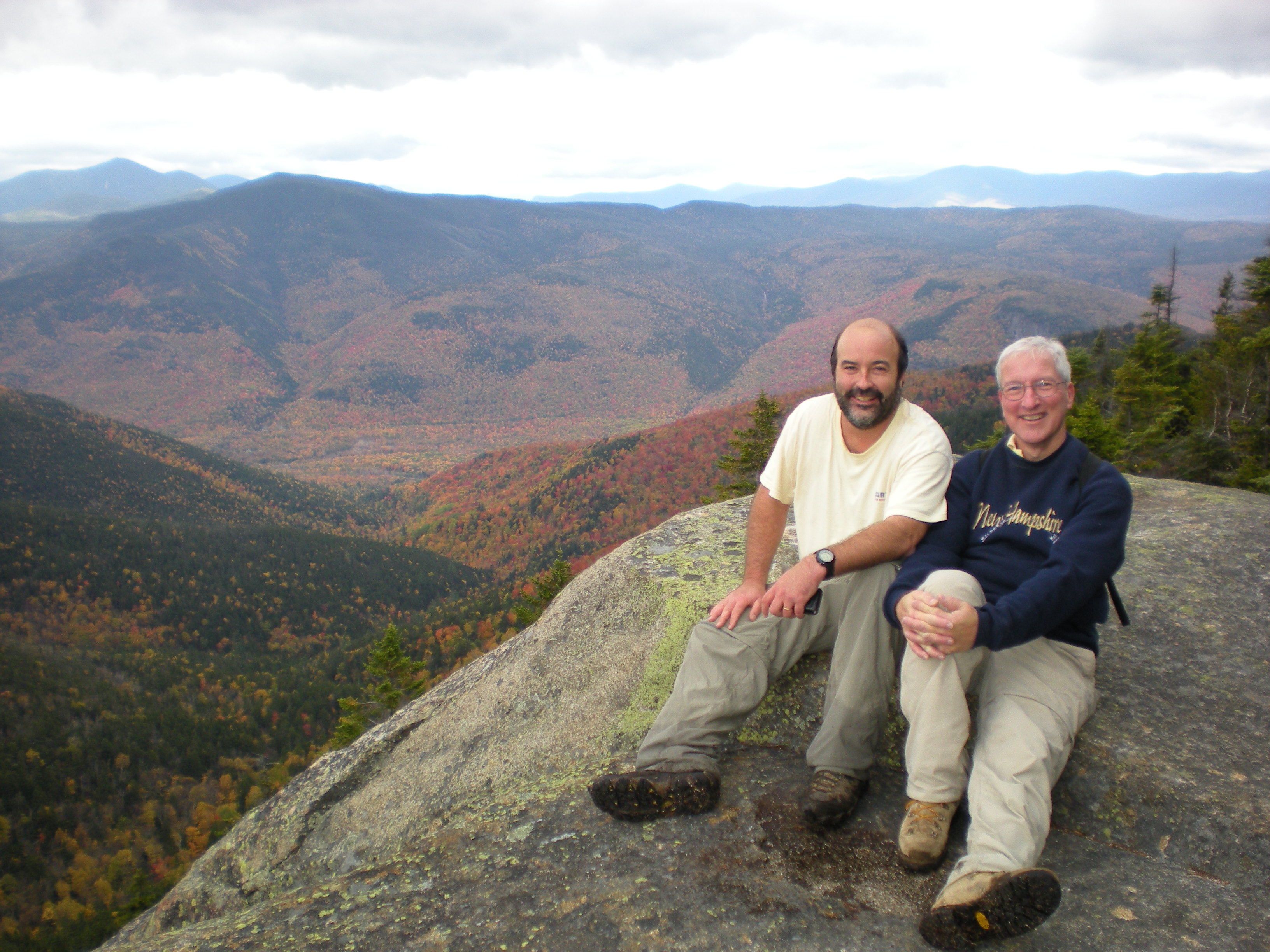 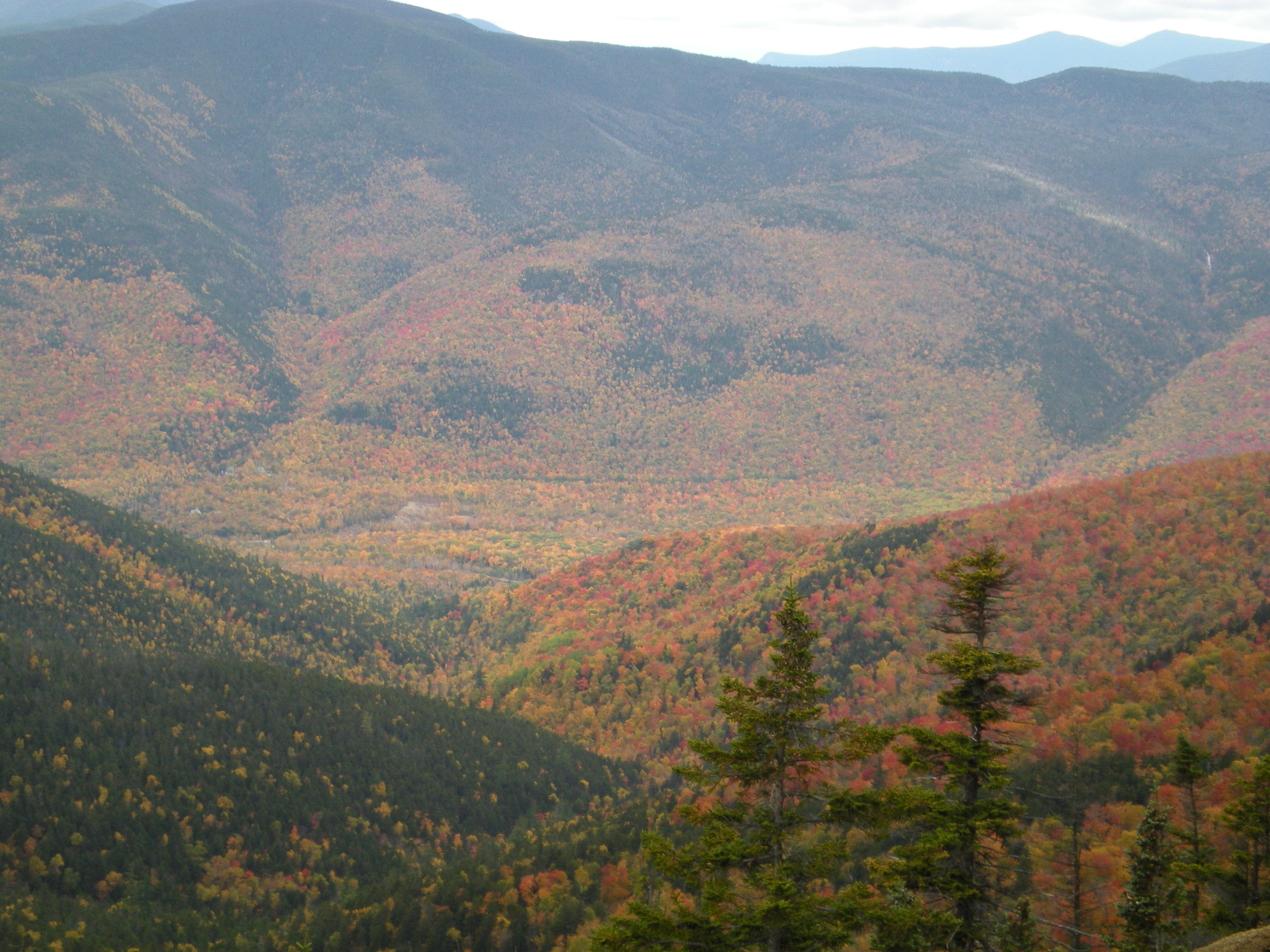 The views from Stairs Mountain were fantastic (left). We met there a couple of folks who had stayed the night - first people we had seen all day. The view of the Saco Valley to the south (right) allowed us to discern Arethusa Falls and Nancy Cascade. Arethusa is clearly seen on the picture if you blow it up to full size. One thing I noticed for the first time, and that you can also clearly see on the picture, is that the north sides of the valleys are covered by conifers while the south sides are covered by deciduous trees. I guess that's most apparent during foliage season! 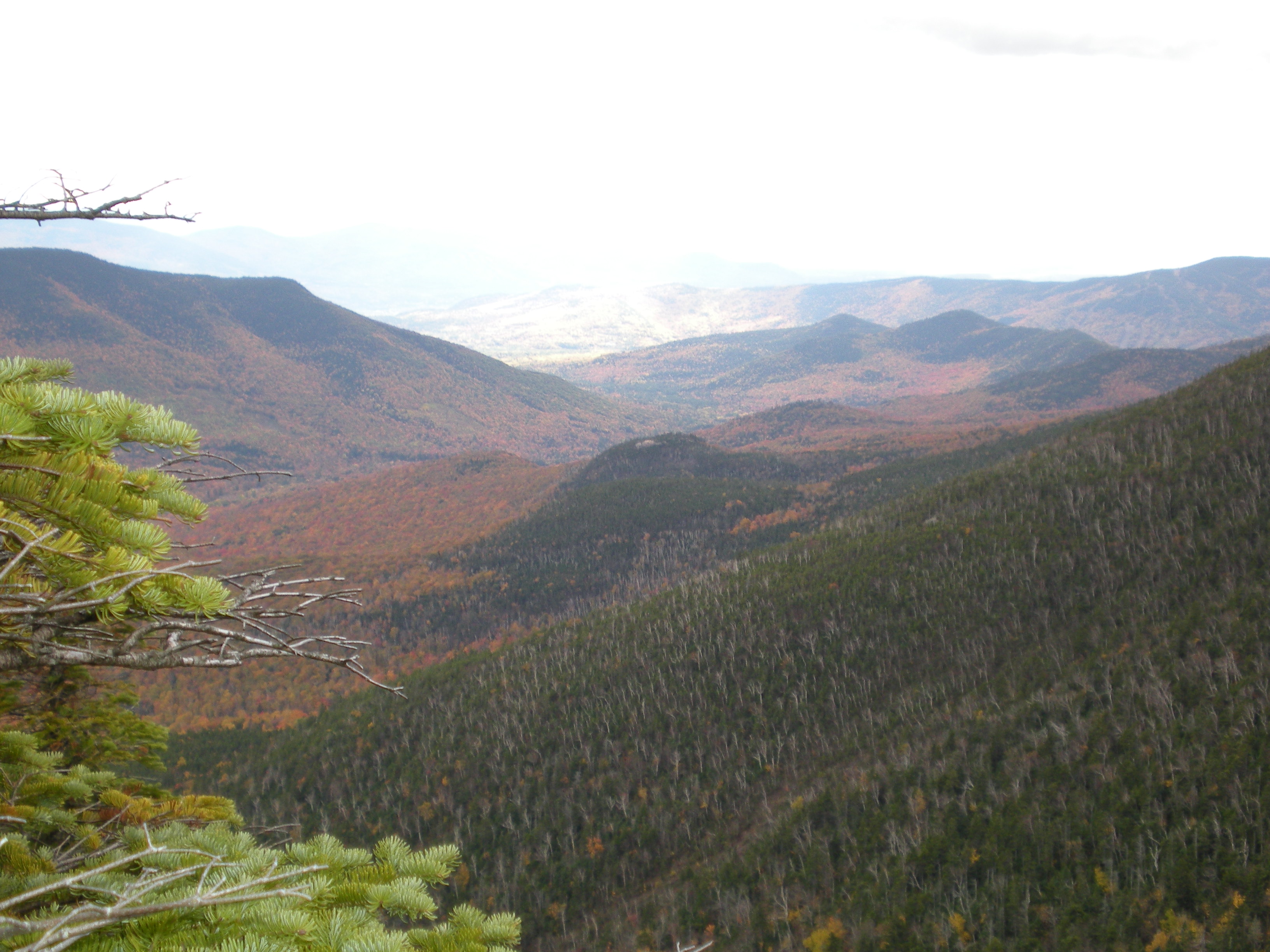 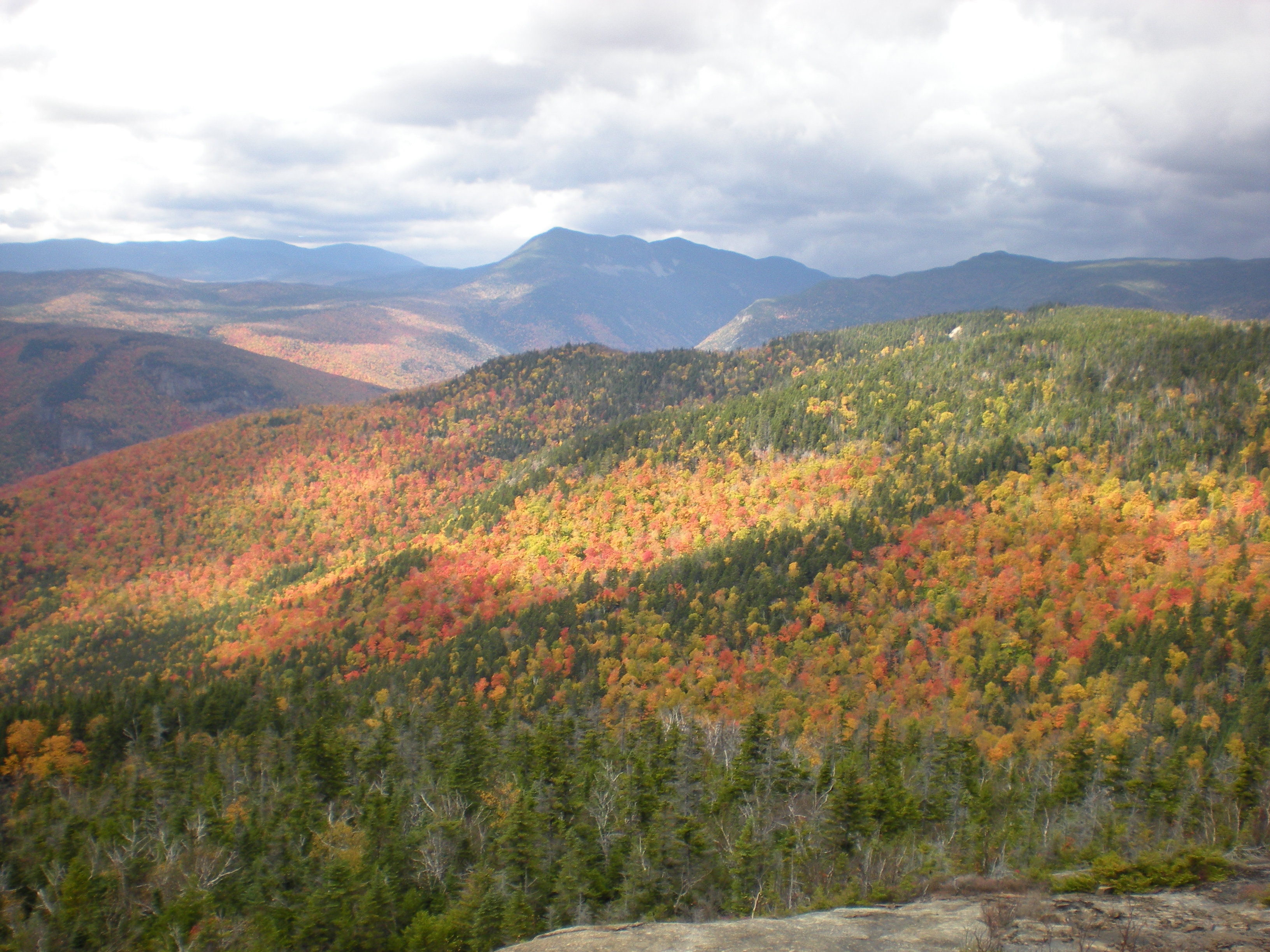 Stairs Mountain also afforded beautiful views to the north of Parker Mountain and a wild valley (left). After hanging out for a while we headed back down to the intersection with the Parker Trail. We visited Mt. Resolution shelter, which we agreed does not earn any stars, and climbed on the ledges of Mt. Resolution which by contrast definitely have four-star views (right, looking towards Crawford Notch). 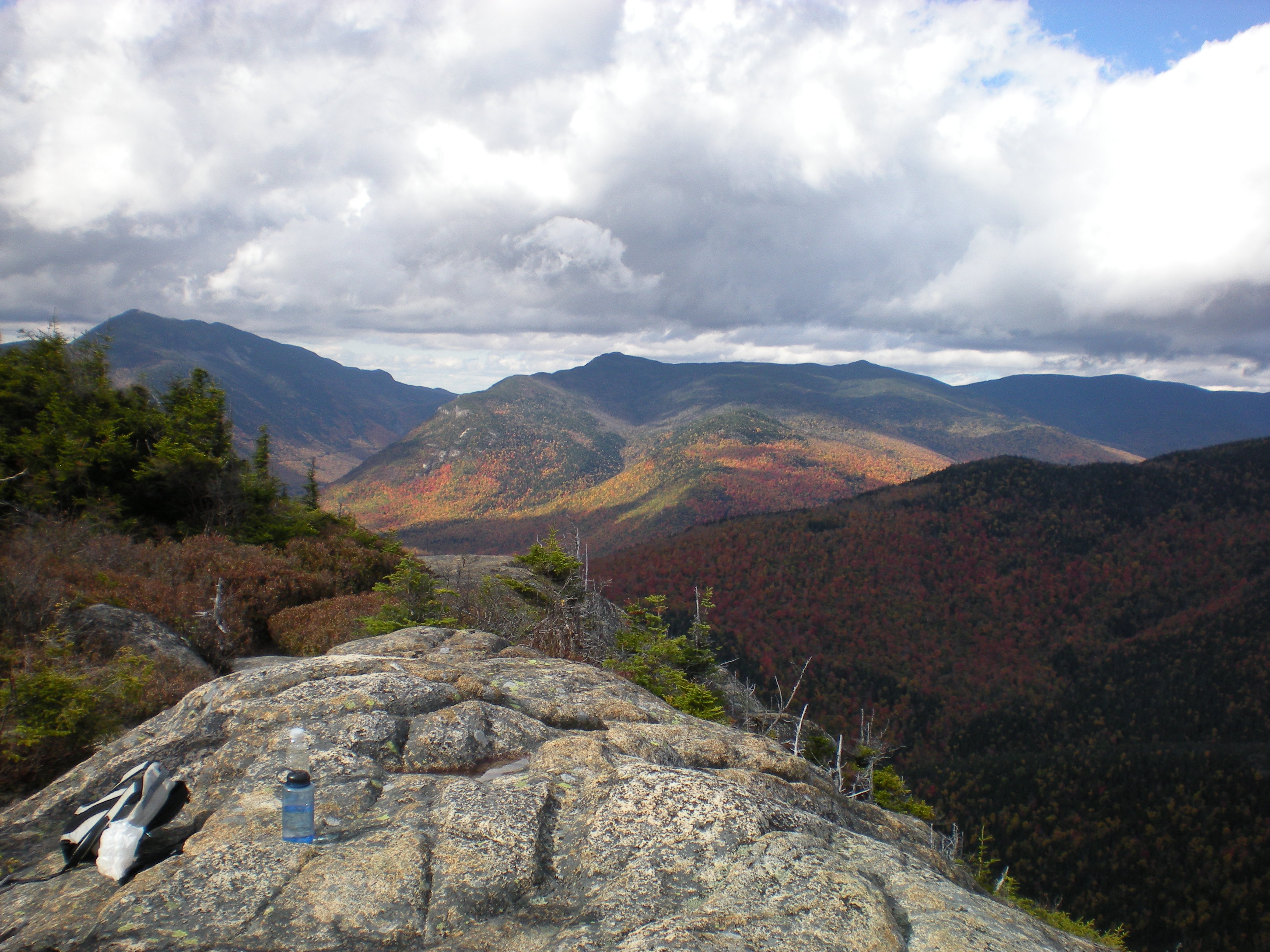 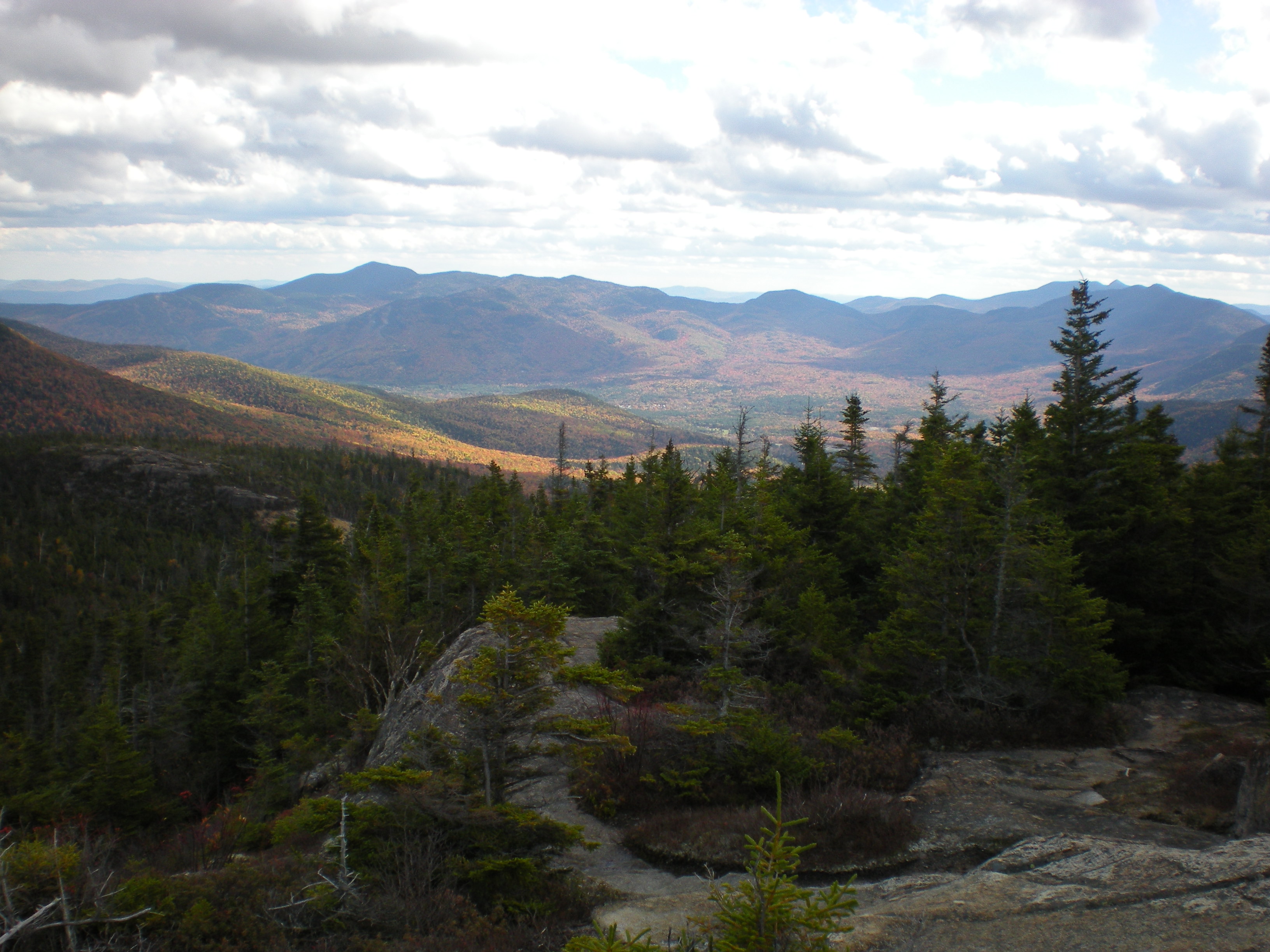 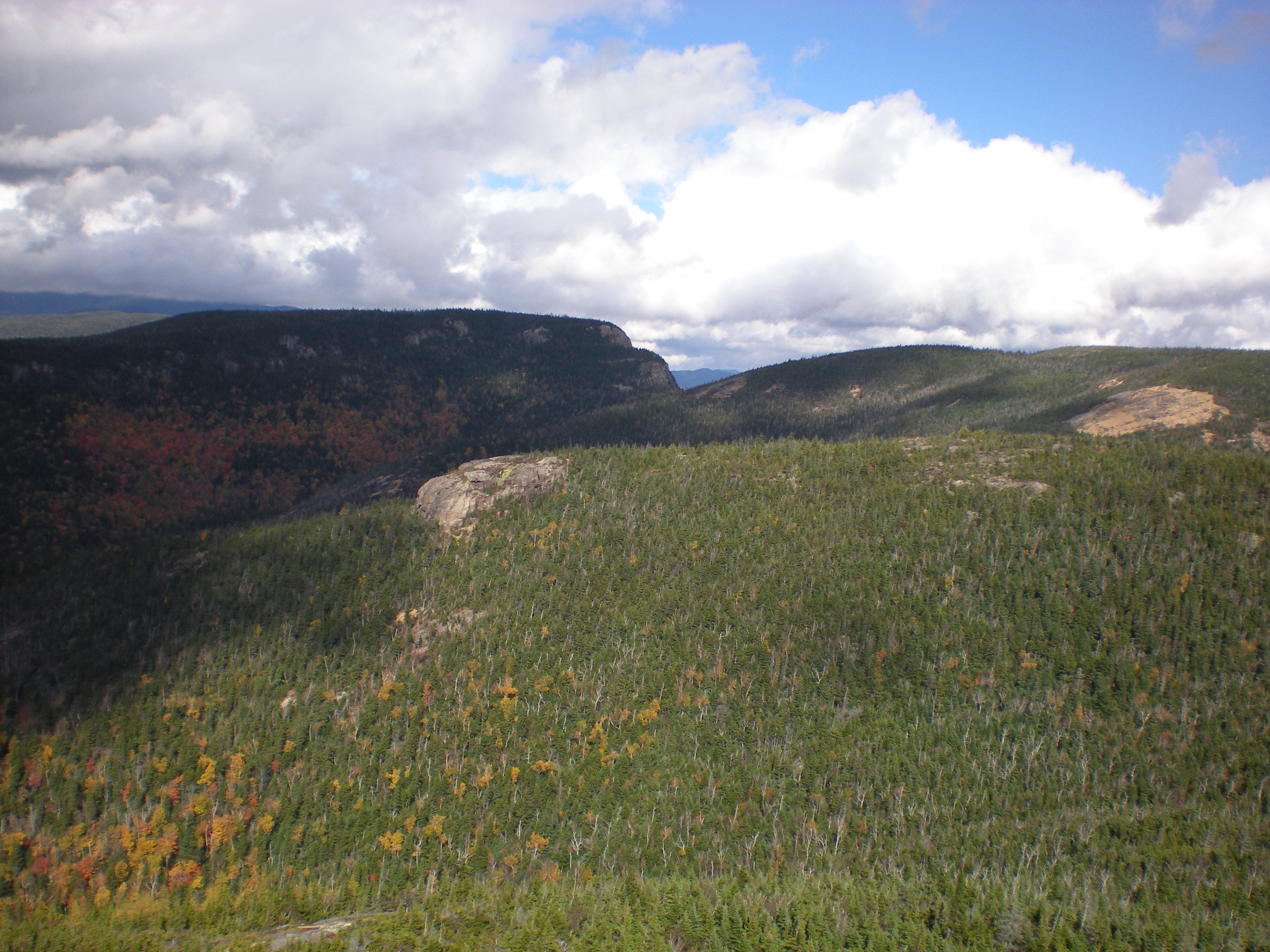 We continued back on the Davis Path and headed up Mt. Crawford, which has a well-deserved reputation as a fantastic moderate hike. The 360 degree views are absolutely fabulous looking north towards Crawford Notch (left) as well as looking south (center). We also had a great view of Stairs Mountain (right), which indeed looks like giant Stairs. All together it was a great 8-hour hike, and Roger still made it back in time to watch the Patriots game!