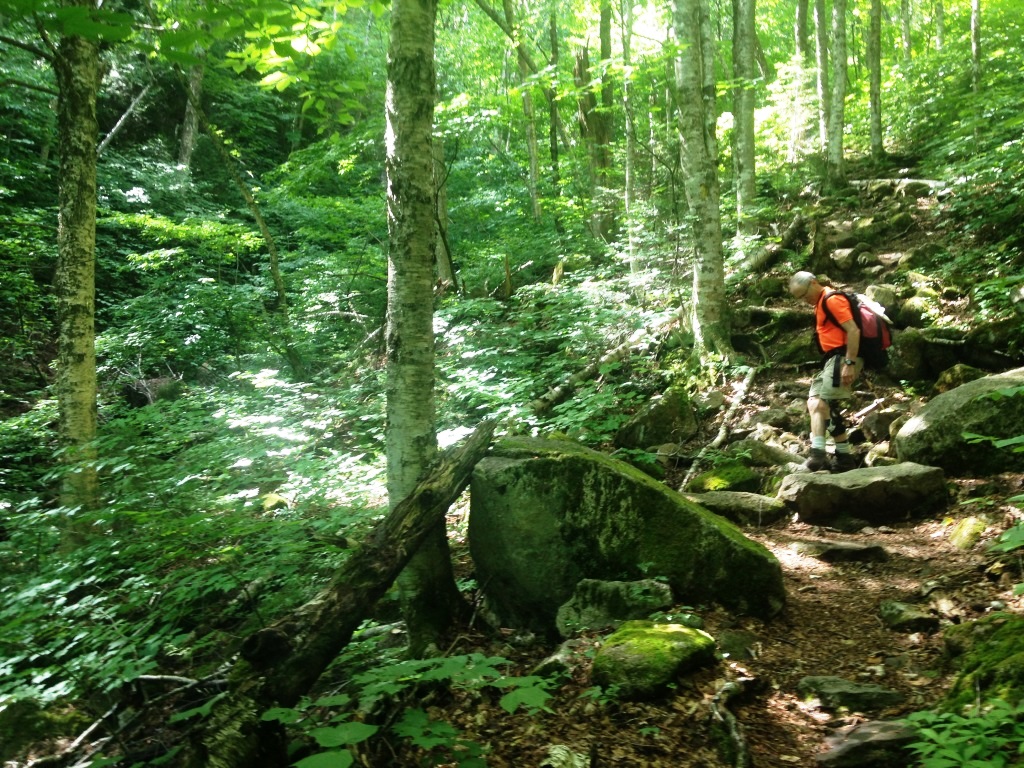 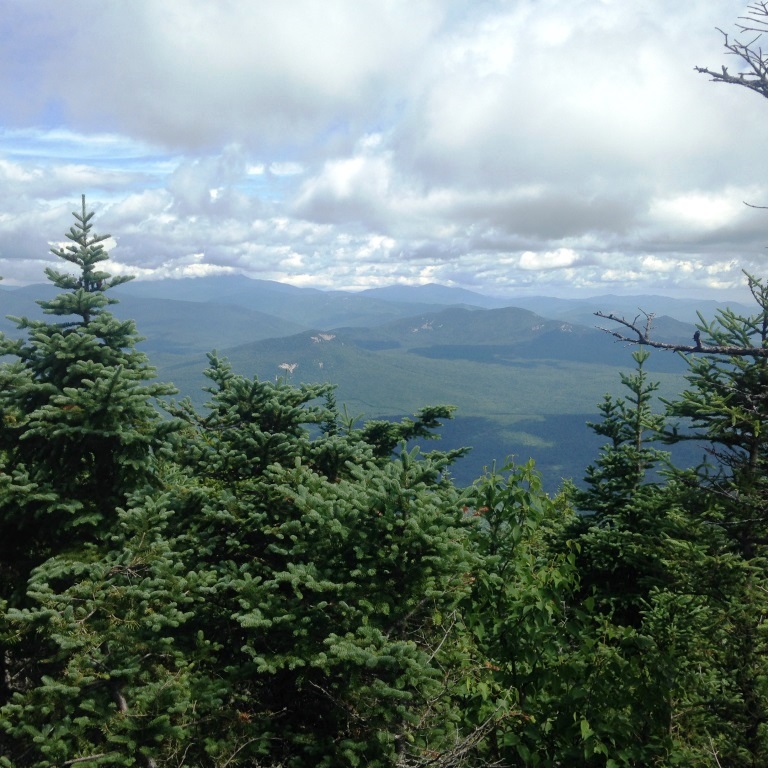 Tripyramids is one of the first White Mountains peaks I had climbed with my kids, using the standard Livermore loop - we had to try it twice, our first attempt failed because the north slide was too wet and I didn't want to have to explain an accident to my wife. All that was more than 15 years ago and I had not been to Tripyramids since because it's a long way from Bretton Woods. Peter Wyatt and I did it this time from the Kancamangus Highway on the north side, going up the Pine Bend Brook trail and down the Sabbaday Brook trail. The Pine Bend Brook trail is described in the AMC guide as steep and rough but we found it to be neither. It is very well constructed with excellent footing all the way up, and the unusually tall forest is beautiful (left). We reached in this manner the top of North Tripyramid, which has a limited view to the east (right). 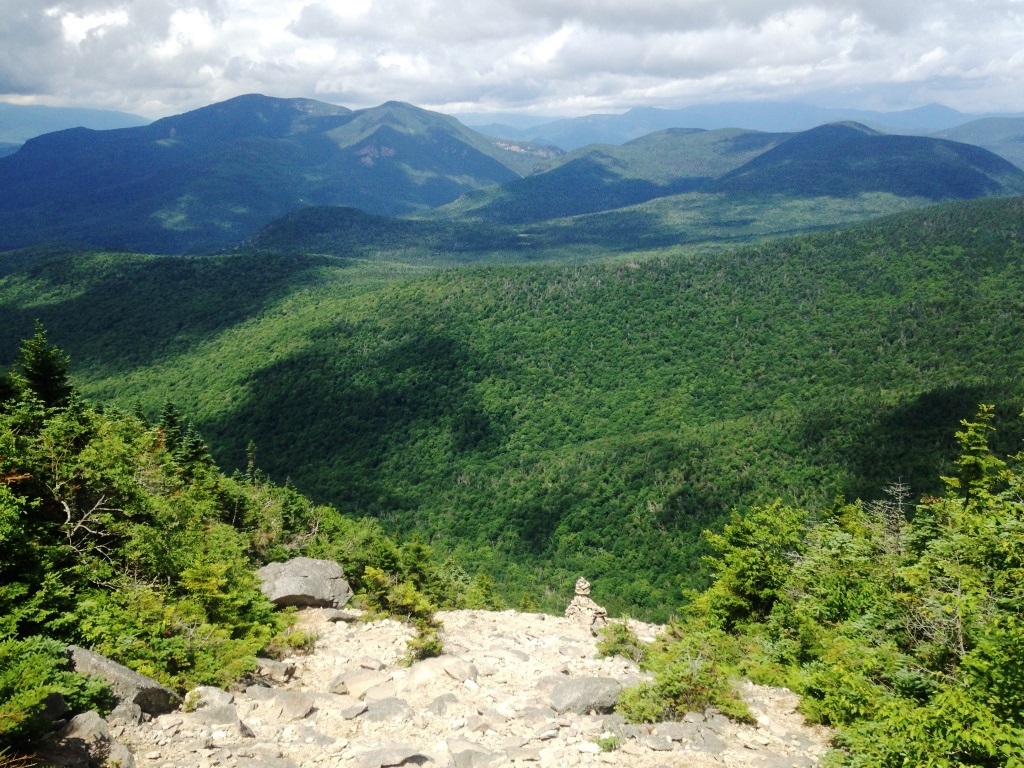 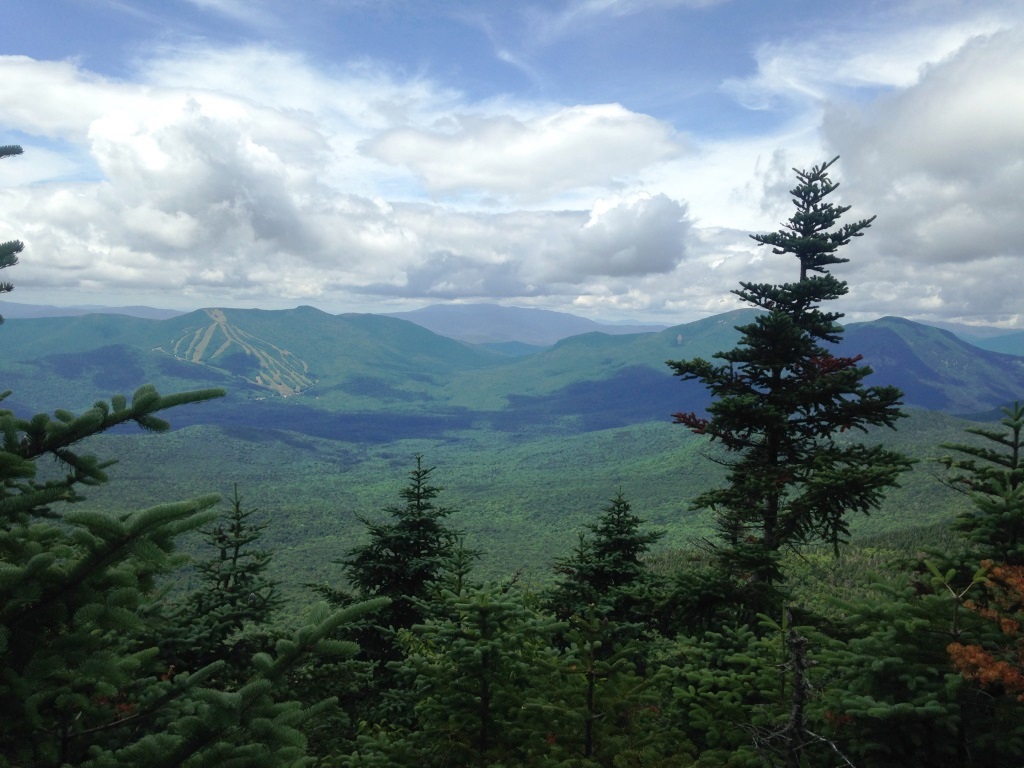 From there we dropped to the top of the North Tripyramid slide, down about 200 feet, for a superb view to the north (left). There we heard that someone had broken his leg on the slide that morning but had been rescued OK. We went back to the top and on to Middle Tripyramid, which is very pointy and wooded but has two good outlooks. At right is the view west to Waterville Valley, and below left is the view east to Passaconaway and Chocorua. 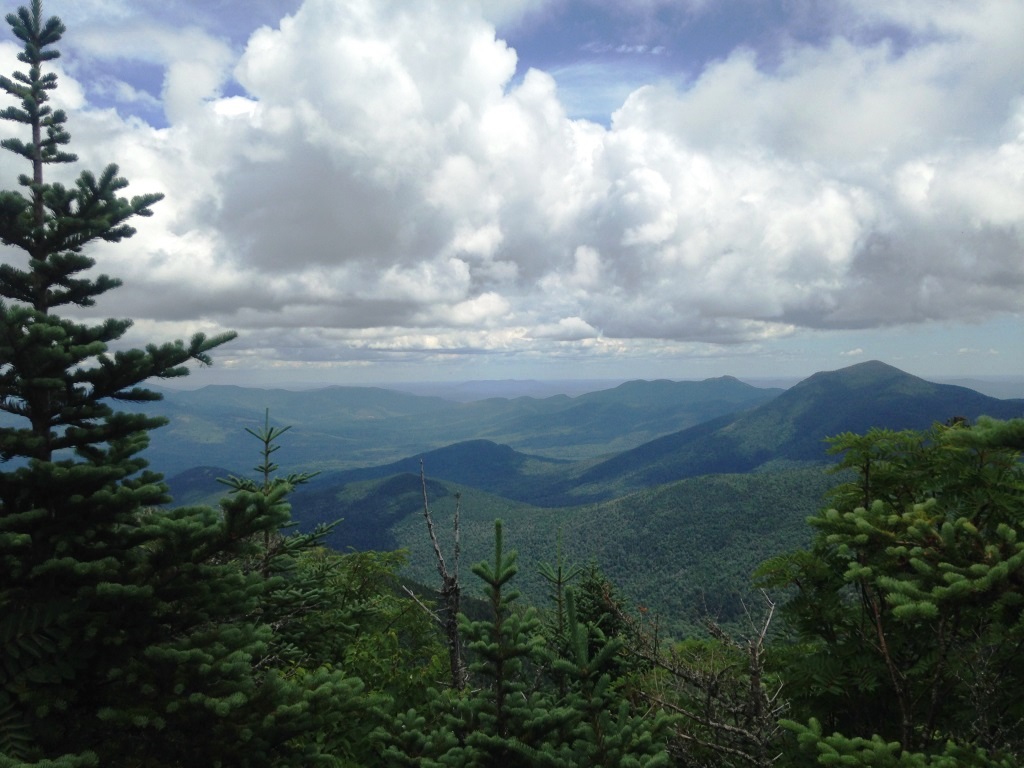 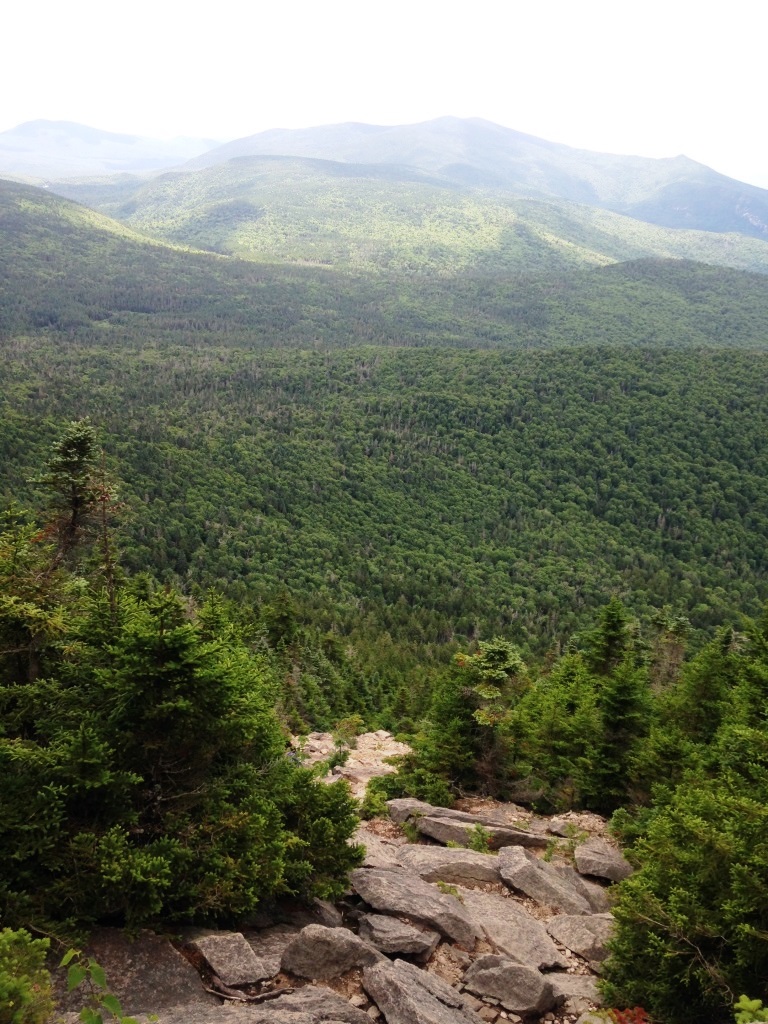 We went on to South Tripyramid, which has no view at all and does not count as a 4,000 footer because it does not have enough of a col with Middle Tripyramid. We dropped about 200 feet to the south slide for a view to the south (right). The view includes Lake Winnepesaukee which unfortunately does not show up on this picture. 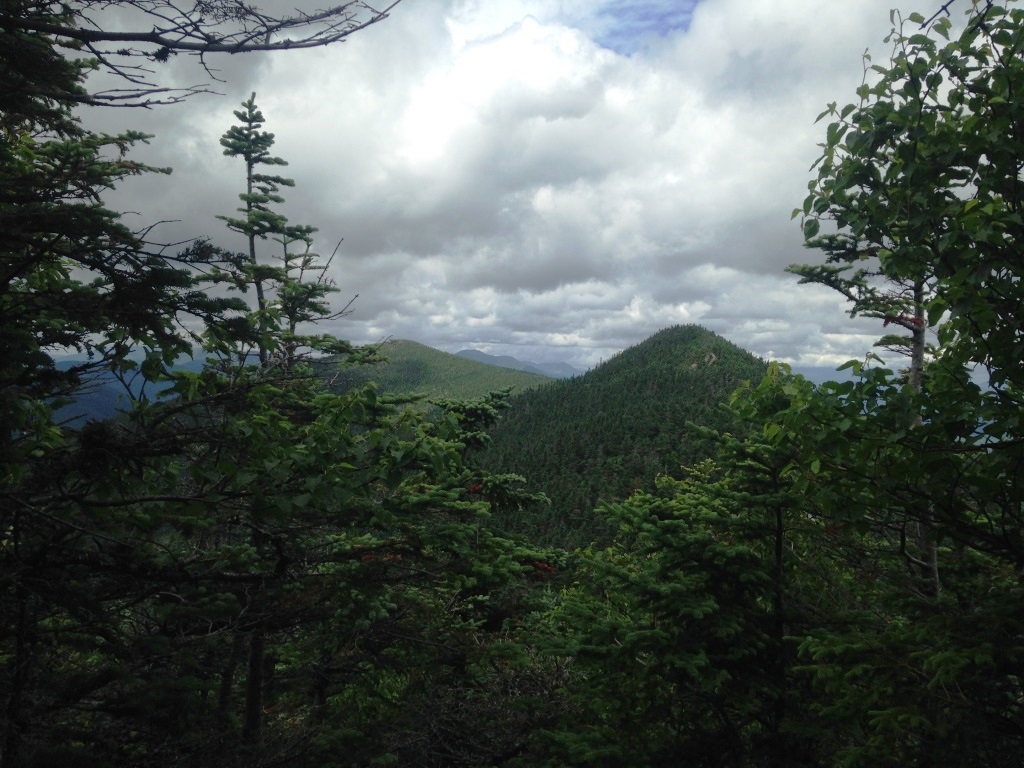 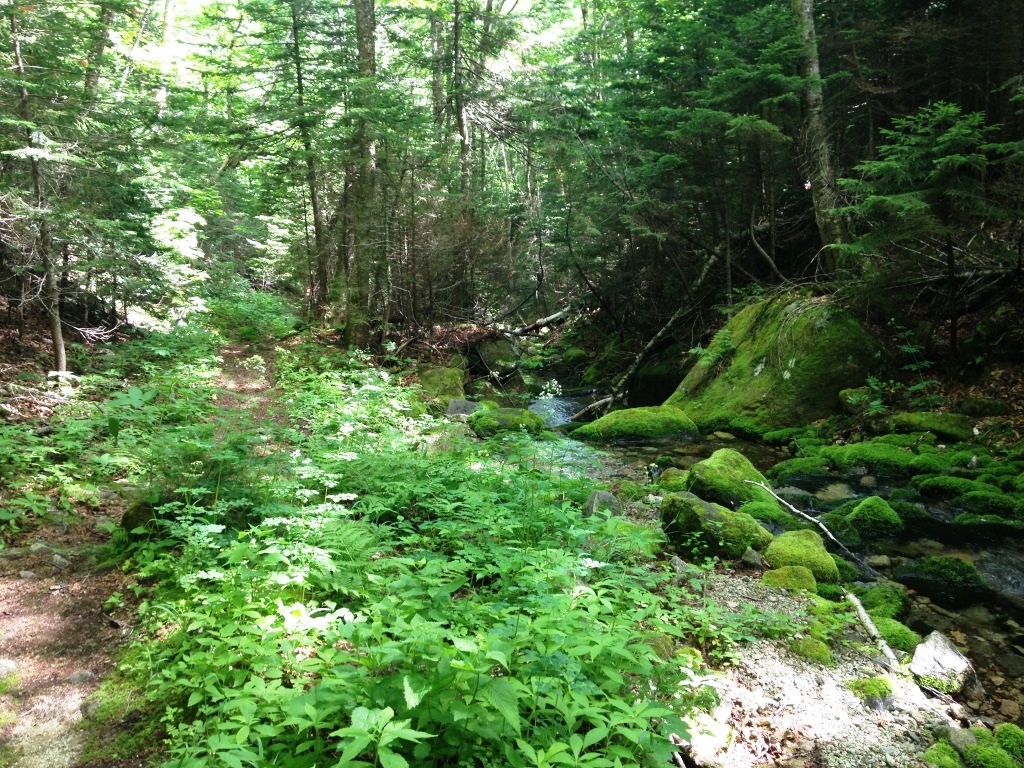 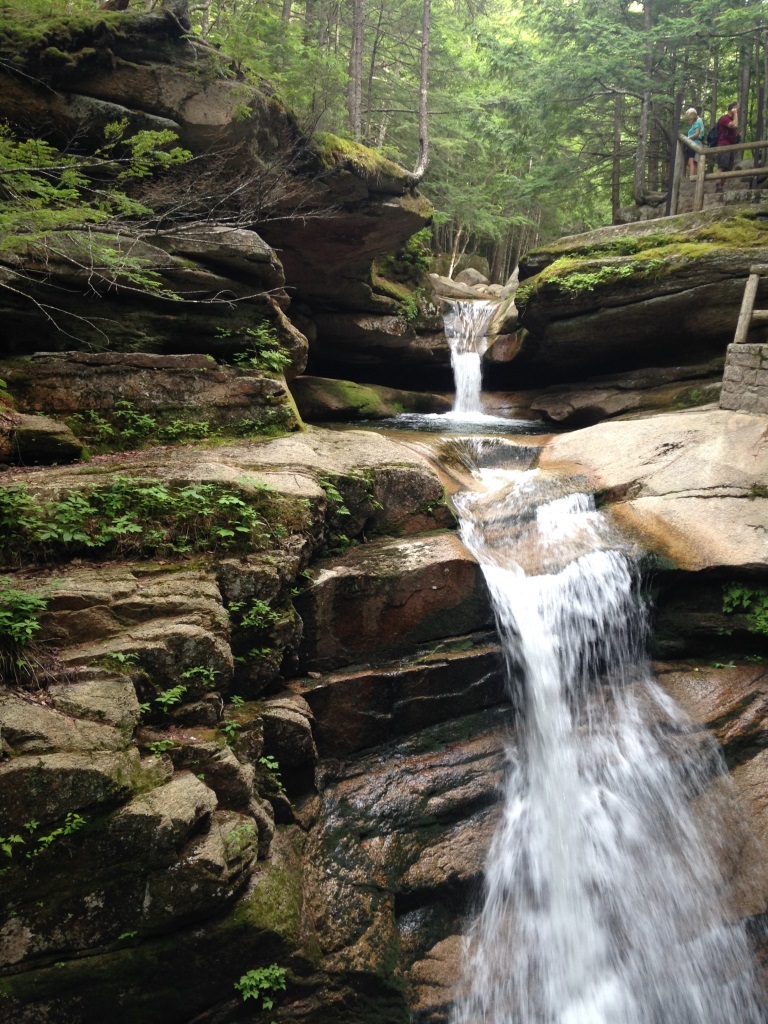 From there we returned along the Tripyramid ridge to the Sabbaday Brook trail. This took us back over South and Middle Tripyramid. Dropping down from South Tripyramid is a great view of Middle and North ahead, showing how Middle really is pointy (left). Overall the Tripyramids ridge has very little views but makes for pleasant hiking though with very rough spots in the vicinity of the peaks. Going down the upper part of Sabbaday Brook trail was also very rough - wet slabs requiring a lot of tree holding. After the trail reached the Sabbaday Brook valley where the walking became much more pleasant, along the beautiful and mossy brook with luxuriant vegetation (middle). We then had a long straight walk-out on a former logging road, with multiple and non-trivial stream crossings towards the end, finally getting us to Sabbaday Falls (right) and back to the Kancamangus Highway for a mile of road walking back to the car.