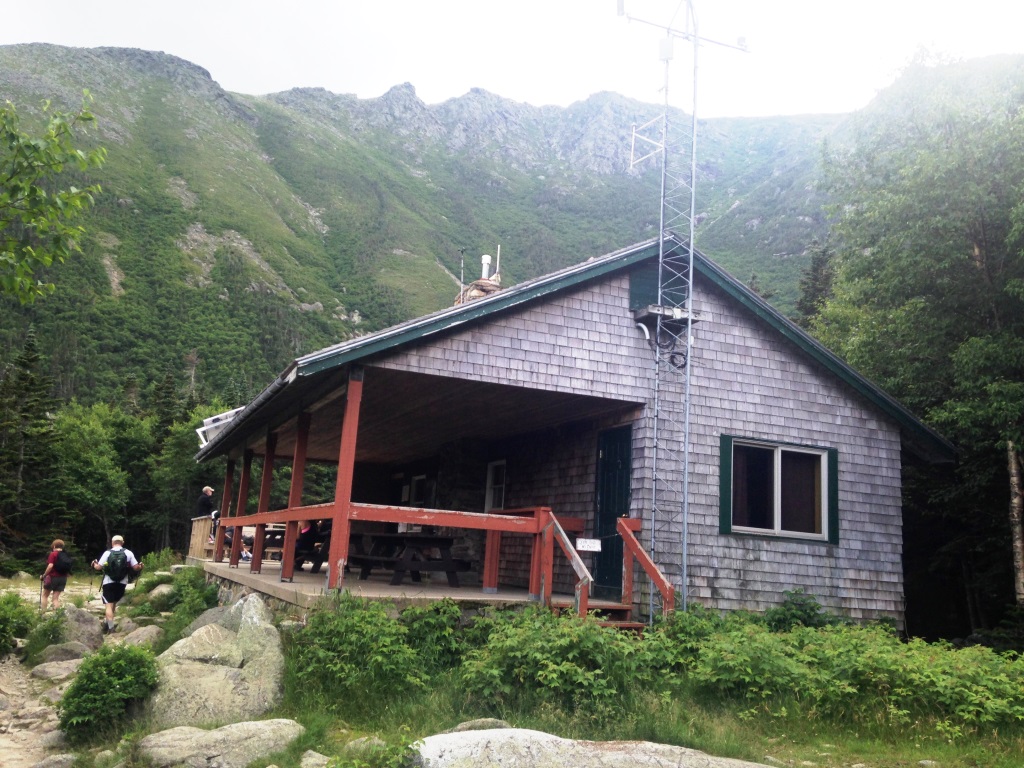 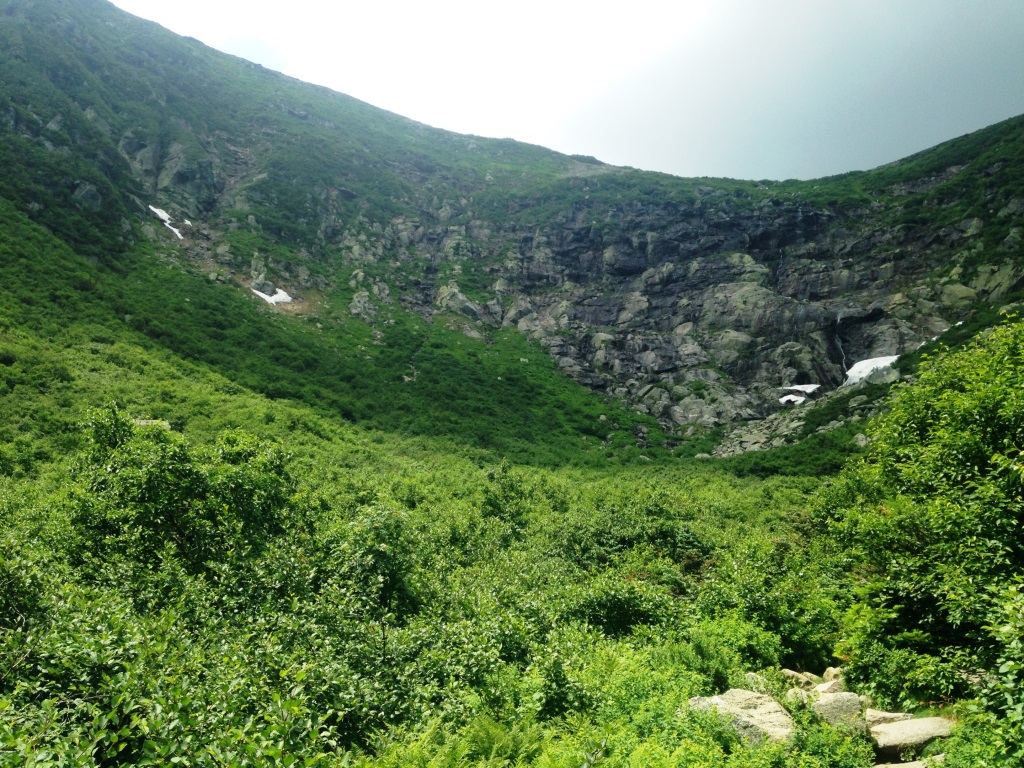 My neighbor Stephanie Manners was doing the Sea-to-Summit triathlon (1.5 miles swim in Maine, 92 miles bike ride to Wildcat, and up Mt. Washington by Tuckerman Ravine - fairly insane). I hiked up Tuckerman Ravine so that I could cheer her on at some point on her climb. The last time I had climbed Tuckerman was in 2009 with my son Oscar, so it was time for a revisit. As I started from Pinkham Notch there were triathletes running past me, just amazing after their swim and bike ride. The initial climb up to Hermit Lakes (left) is boring but after that the view of the ravine opens up and the interesting part begins as one climbs to the floor of the ravine (right). 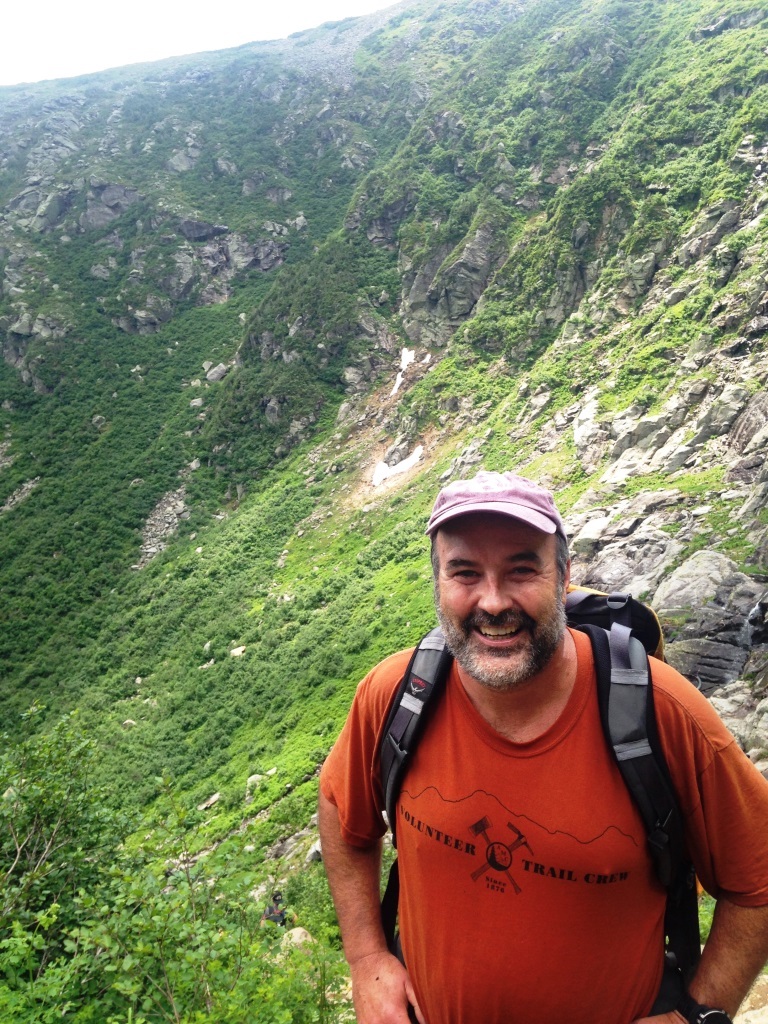 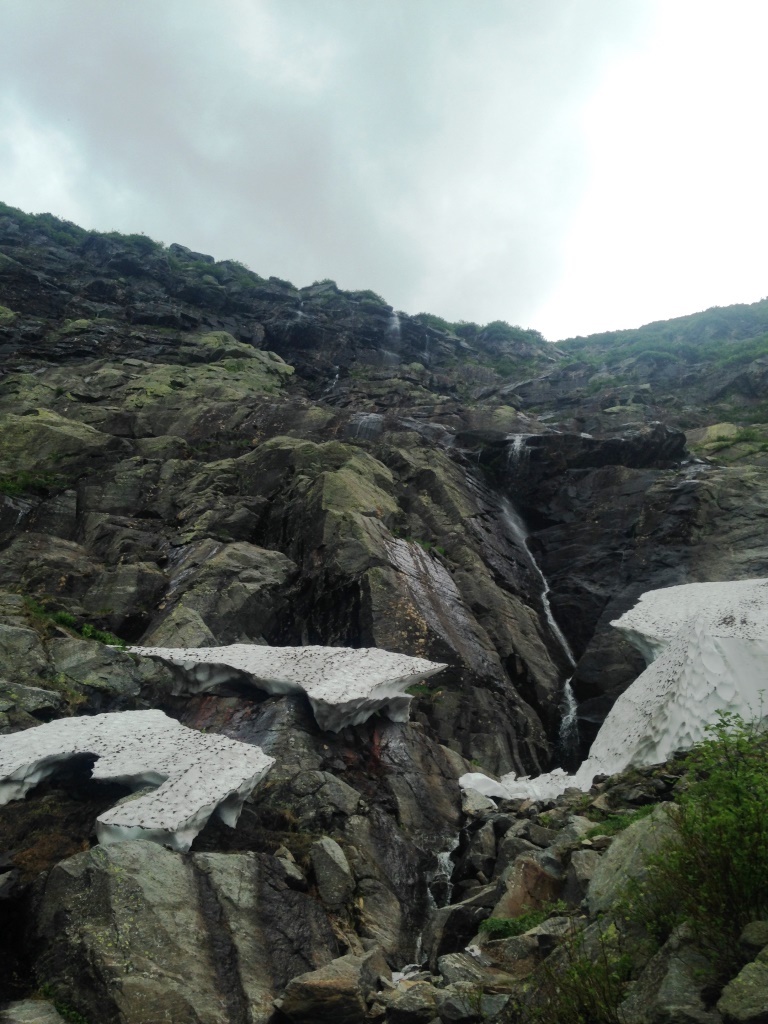 This is where the going starts to get a lot more difficult, with steep climbing on rocks sometimes requiring hands and feet, to get to the bottom of the ravine and then more so to climb up the ravine where the inclination reaches 60 degrees (left). The trail was rebuilt a few years ago, and I think that this added a number of rock steps, but the climb is still excruciating. It is a beautiful climb though, and there were patches of remaining snow (right). I have snowboarded Tuckerman a few times in winter but never that steep part - only the gullies to the left and right which just reach 50 degrees and that's plenty enough to scare me. 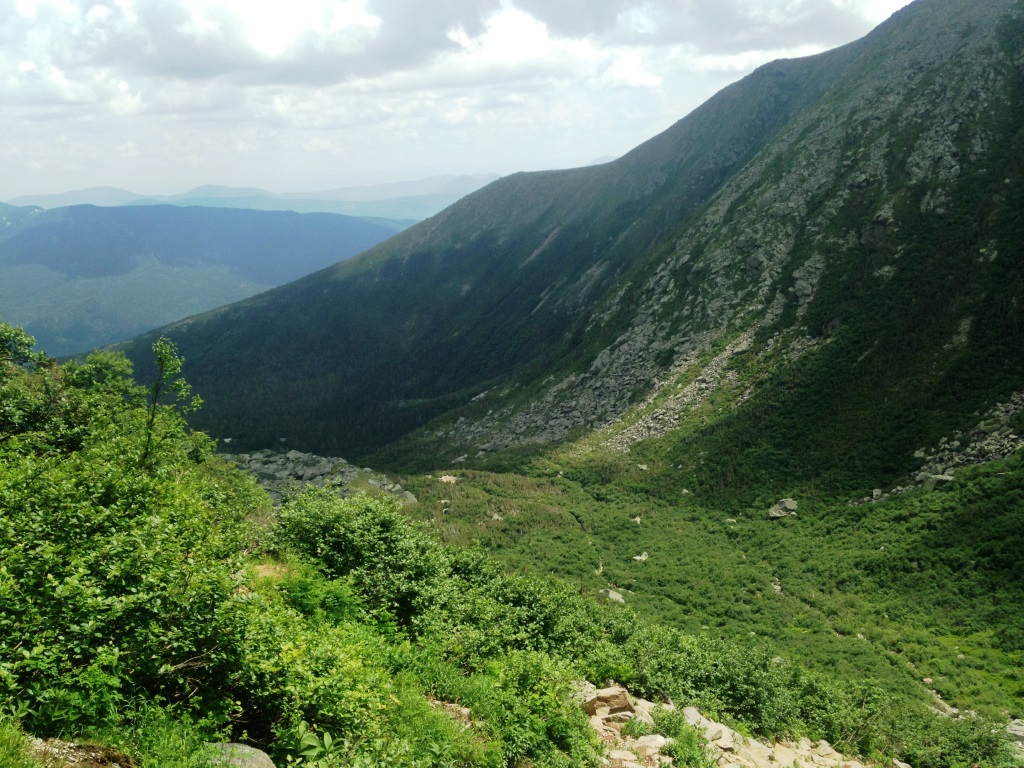 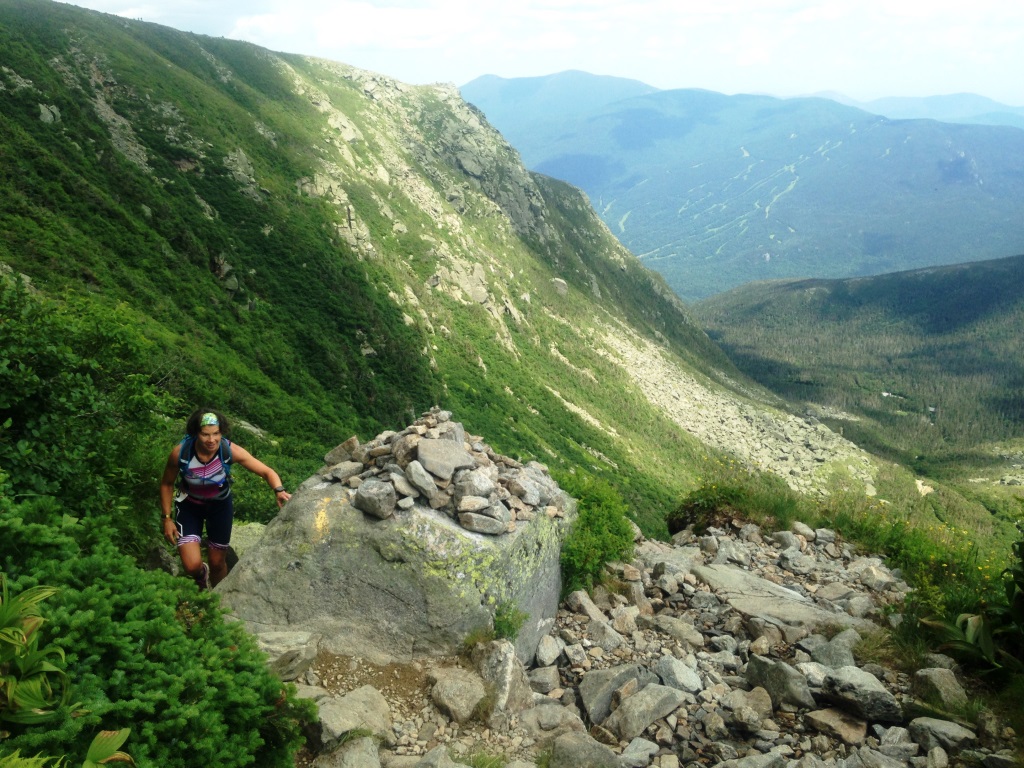 By this time I noticed that the triathletes were starting to show some wear (I can imagine!) and I passed a few whose faces depicted various states of distress. So I figured that the top of the ravine would be a good place to wait for Stephanie to tell her that the worst was over and there was only 0.8 miles to go. It was a beautiful place to hang around and wait (left). After 30 minutes Stephanie appeared, but unlike the other triathletes she was in great spirits and showed no strain (right). I climbed with her for a little while but she was much faster than me and just took off. She ended up winning first place in her age group! 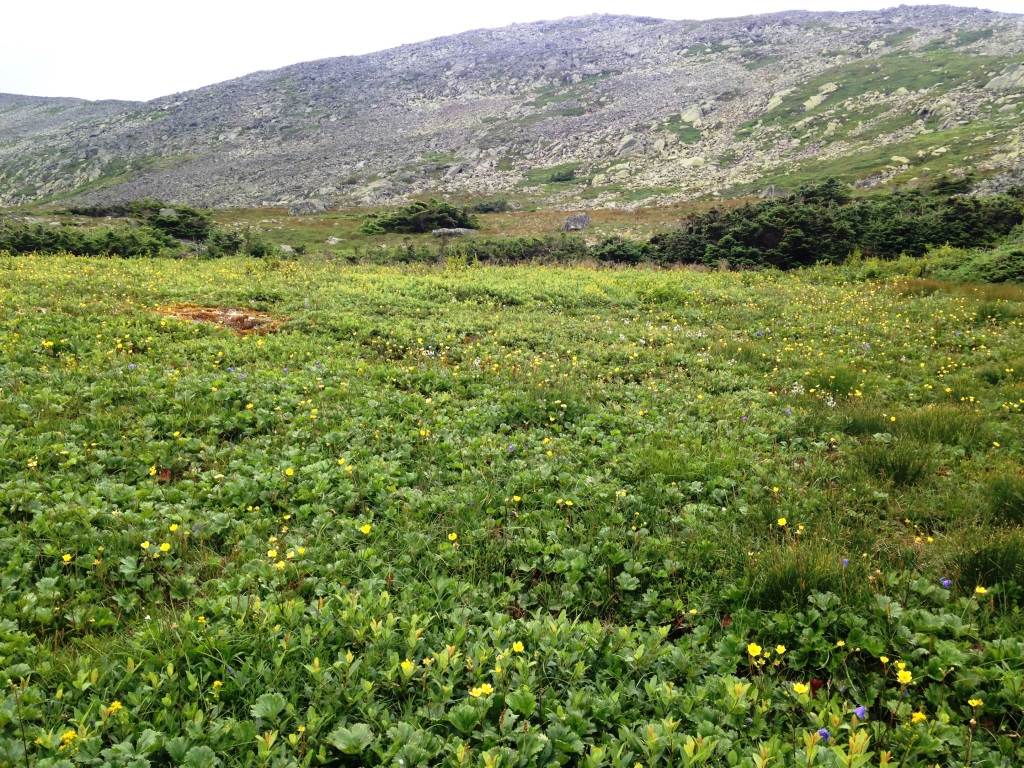 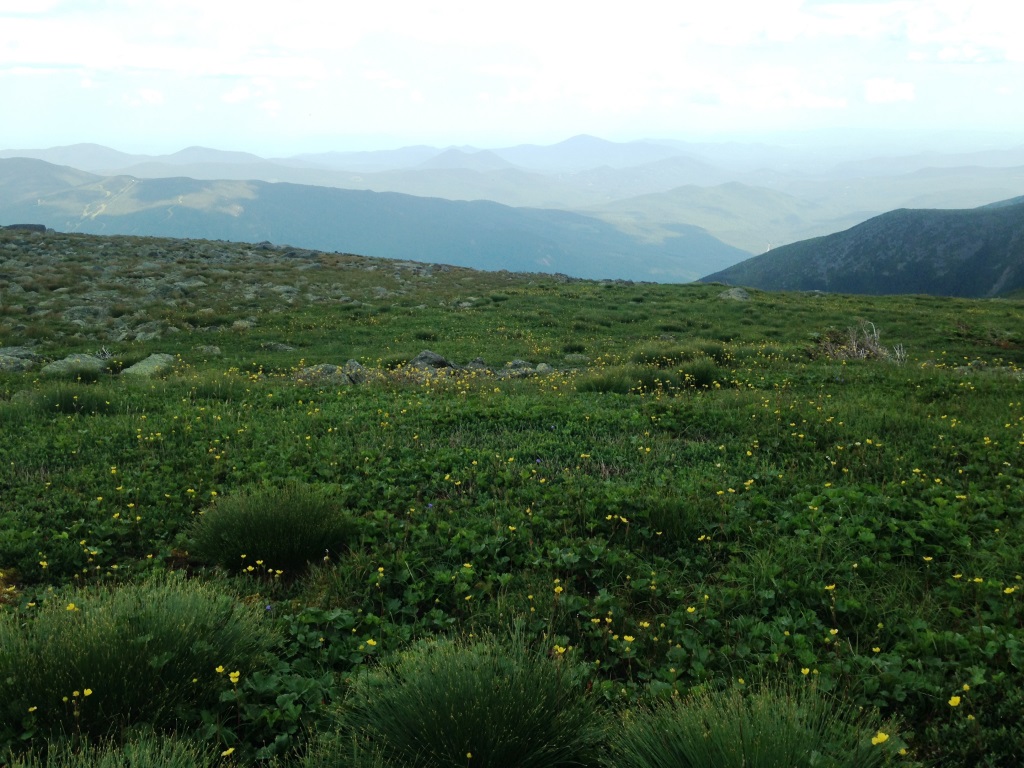 I kept on climbing for a while but gazed at the procession of climbers in the final stretch up Mt. Washington and figured I had better places to go. So I went back down a bit to the Alpine Garden Trail, which I took to its end to Huntington Ravine and back. Alpine Garden is one of my favorite trails as part of the Mt. Washington Circuit (forget about the peak!). There's never anyone on it because hikers are obsessed with getting to the top, and it is a beautiful stroll above treeline. As its name indicates the trail was carpeted with white, yellow, and blue flowers (left and right). 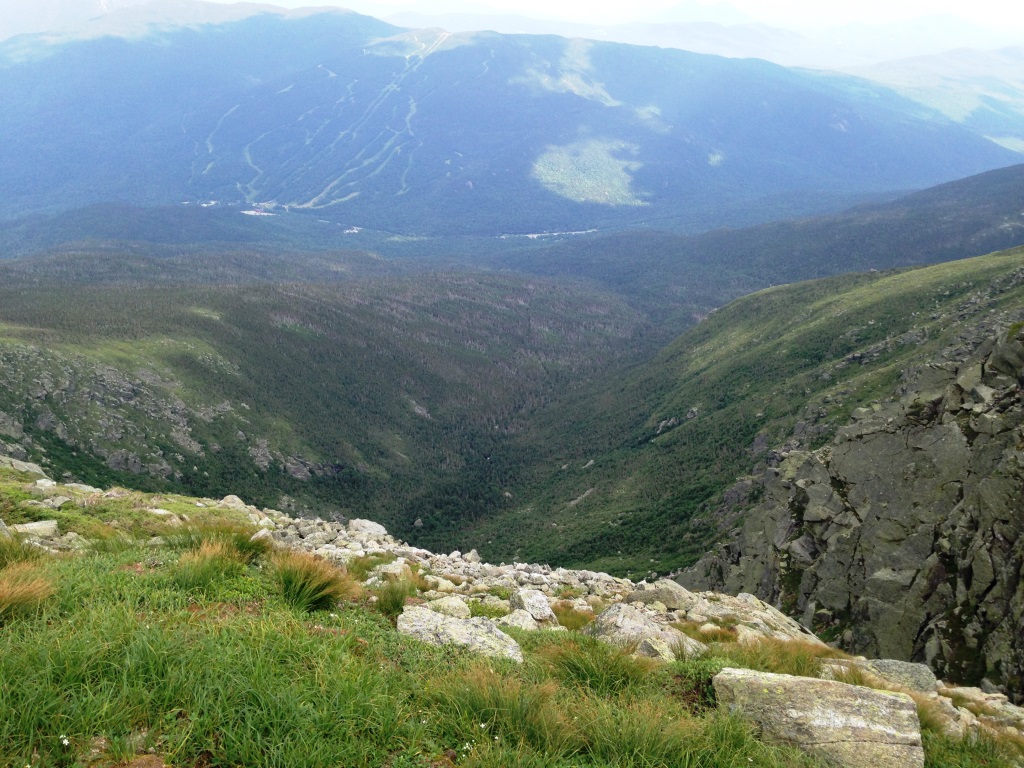 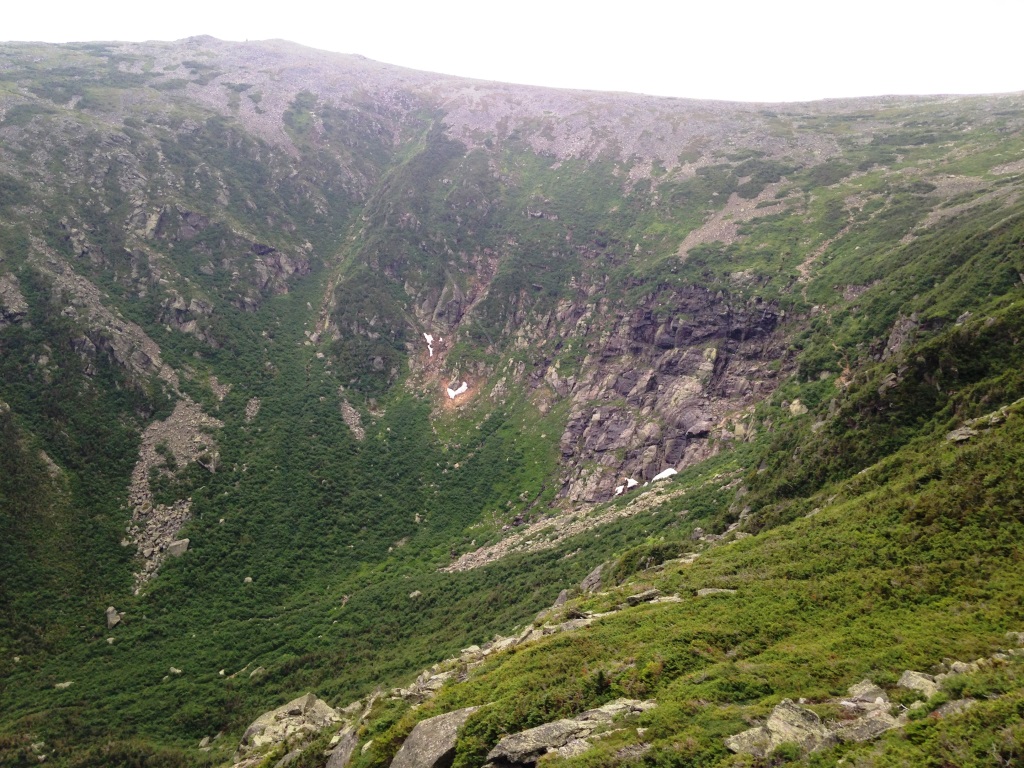 At the end of the Alpine Garden Trail I peered down the Huntington Ravine Trail (left), which is one of two hikes that I'm glad to have done once and will never do again (the other is the Six-Husbands Trail). I then returned the way I came to head down the Lion's Head Trail, which offered nice side views of Tuckerman Ravine (right). 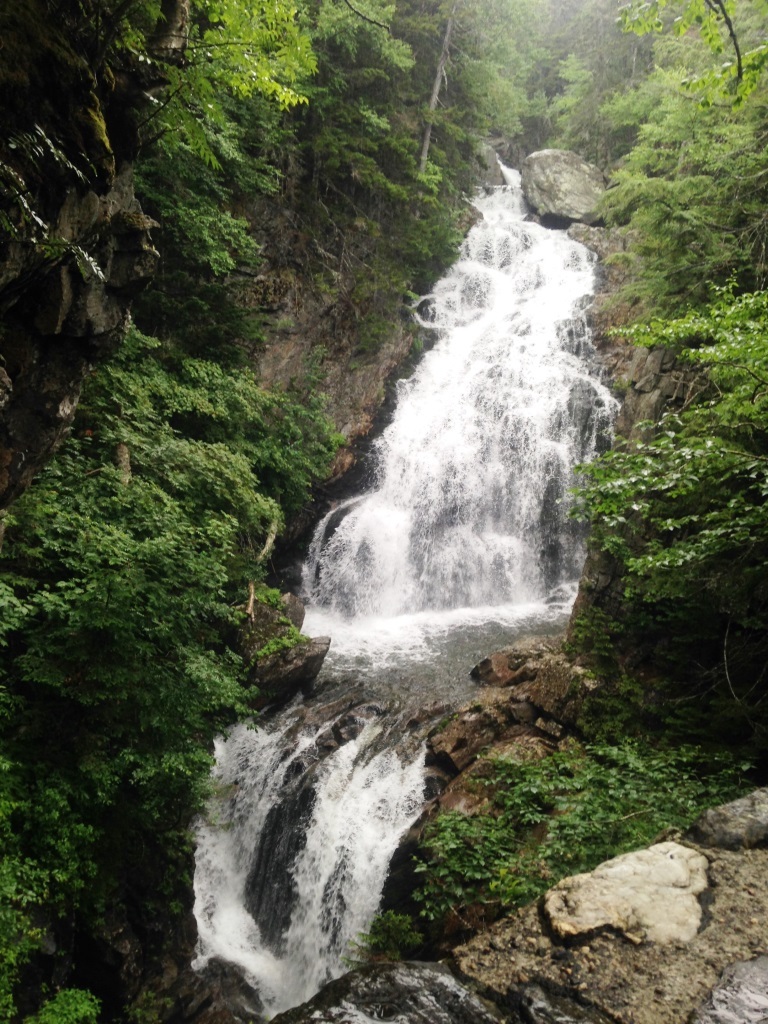 I had not done Lion's Head in a very long time (ever?), it's a steep and rough trail in its upper part with a lot of rock hopping and ledges where you have to be careful where you put your feet. At one point there was a big ladder (left) for which I was grateful. As soon as I got back down to Tuckerman Ravine Trail a major thunderstorm broke and I returned to Pinkham under torrential torrential rain. Shortly before getting to the bottom I stopped at Crystal Cascades to catch it full of water (right).