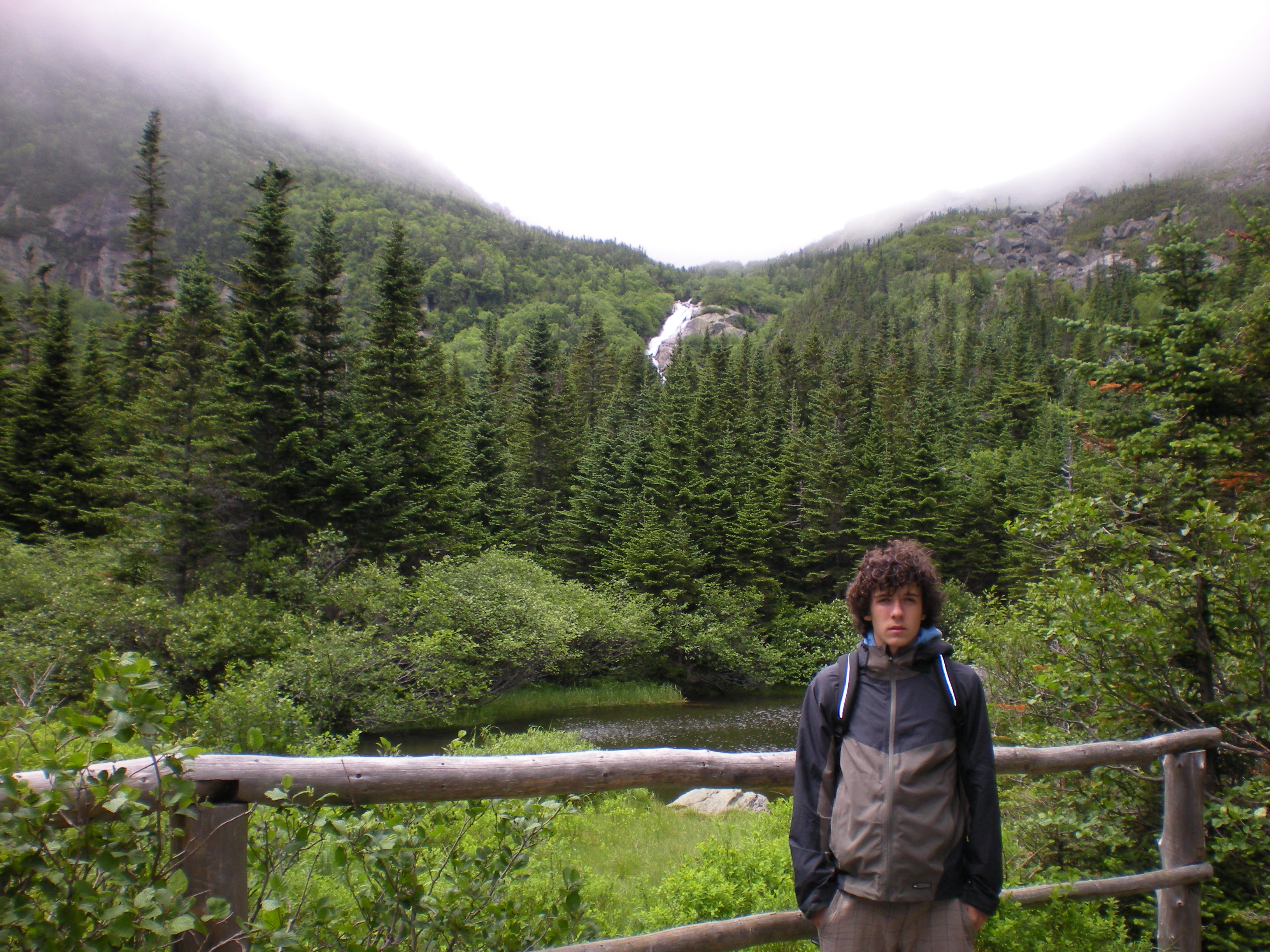 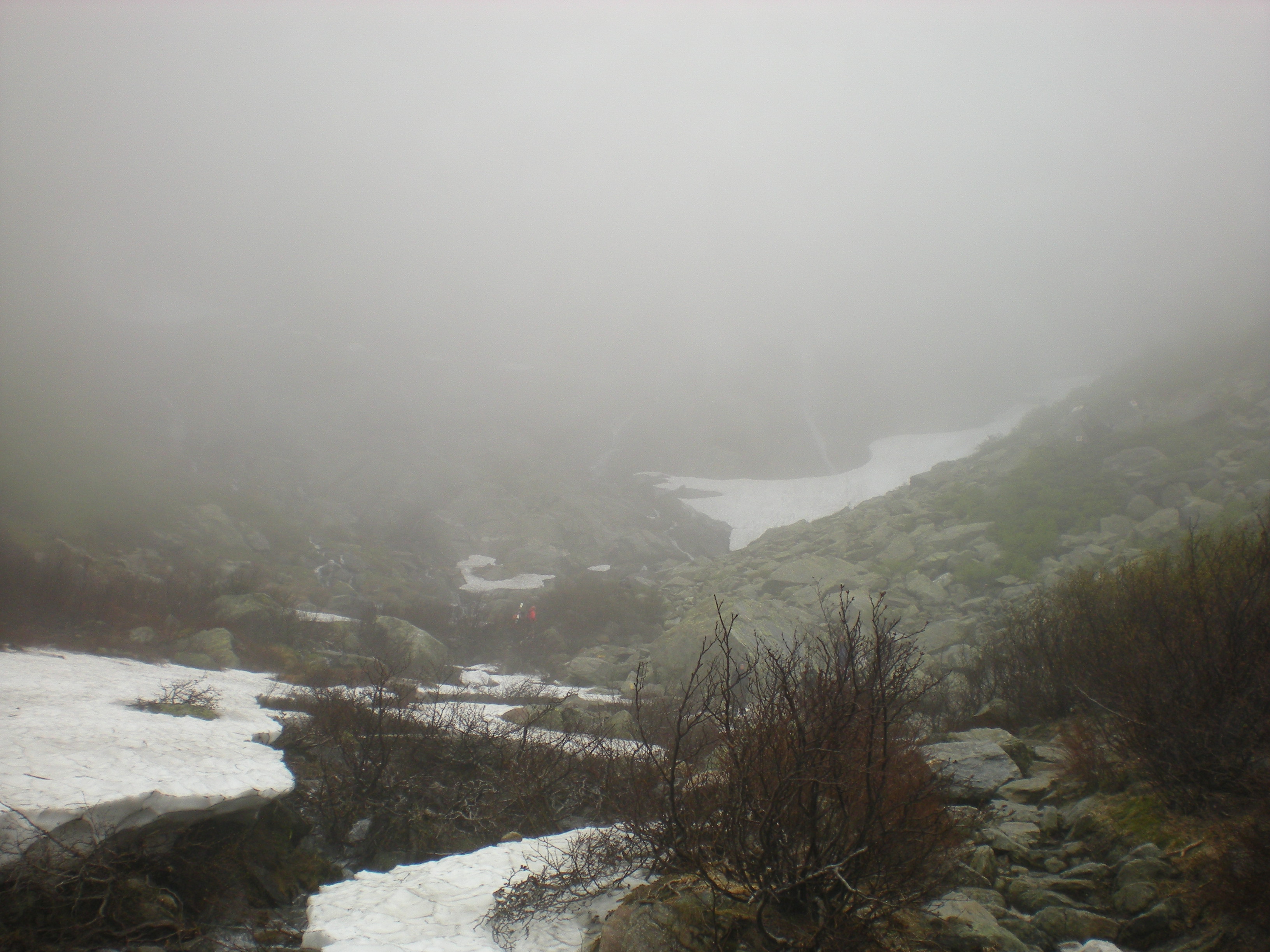 It seems like it's been raining almost non-stop in the White Mountains but the weather cleared - sort of - on July 5 so Oscar and I went up Tuckerman Ravine to see what kind of snow was left. We crossed people with skis, which seemed promising. It was sunny up to Hermits Lakes but the view up Tuckerman was ominous (left) and once in the Bowl we were ensconced in fog with the wind howling, the clouds billowing, the water rushing. Pretty wild. There was some snow (right) but honestly not much to ski on - we wondered where folks had gone. We saw no ski tracks. Maybe they just like carrying skis. 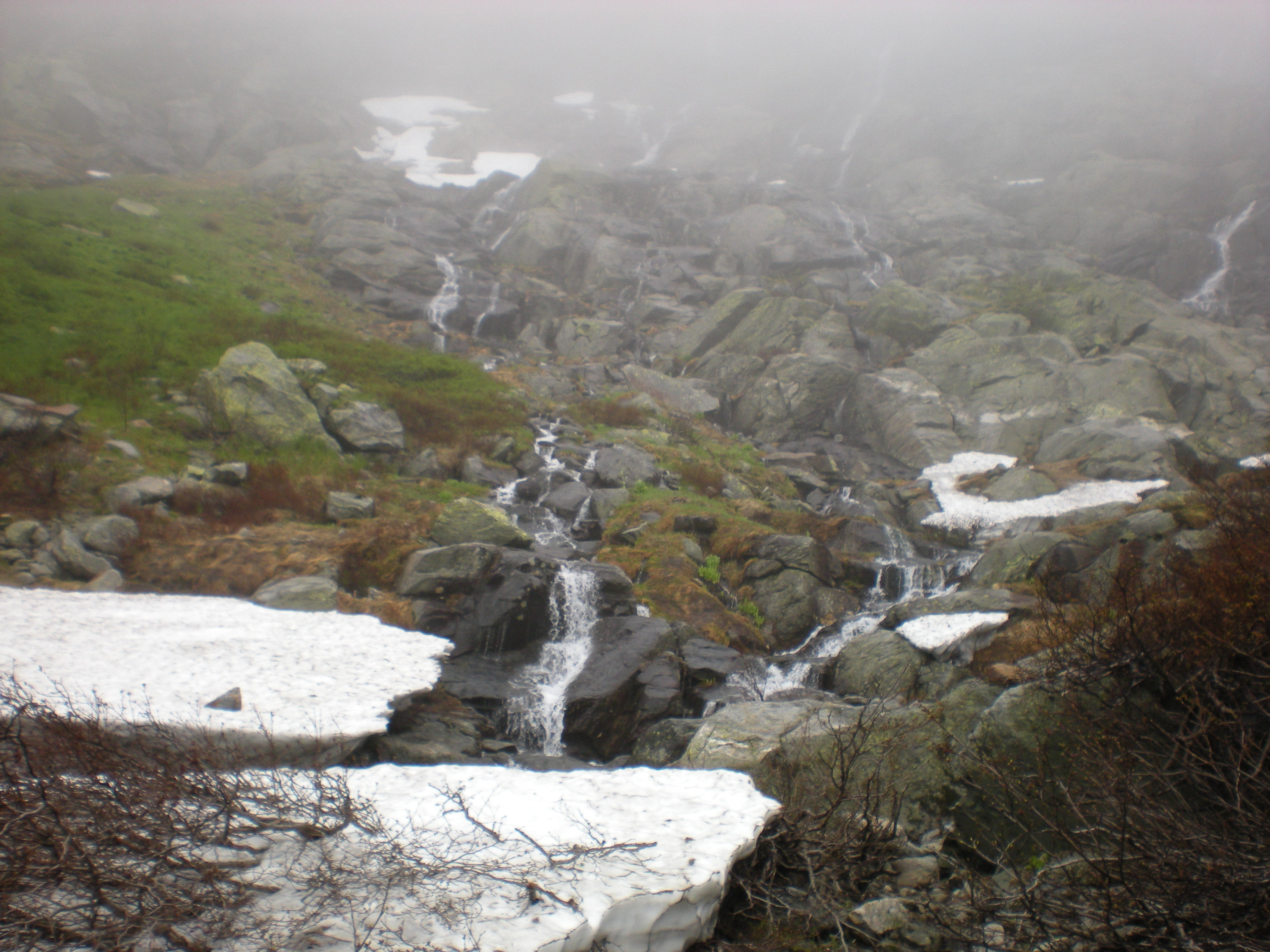 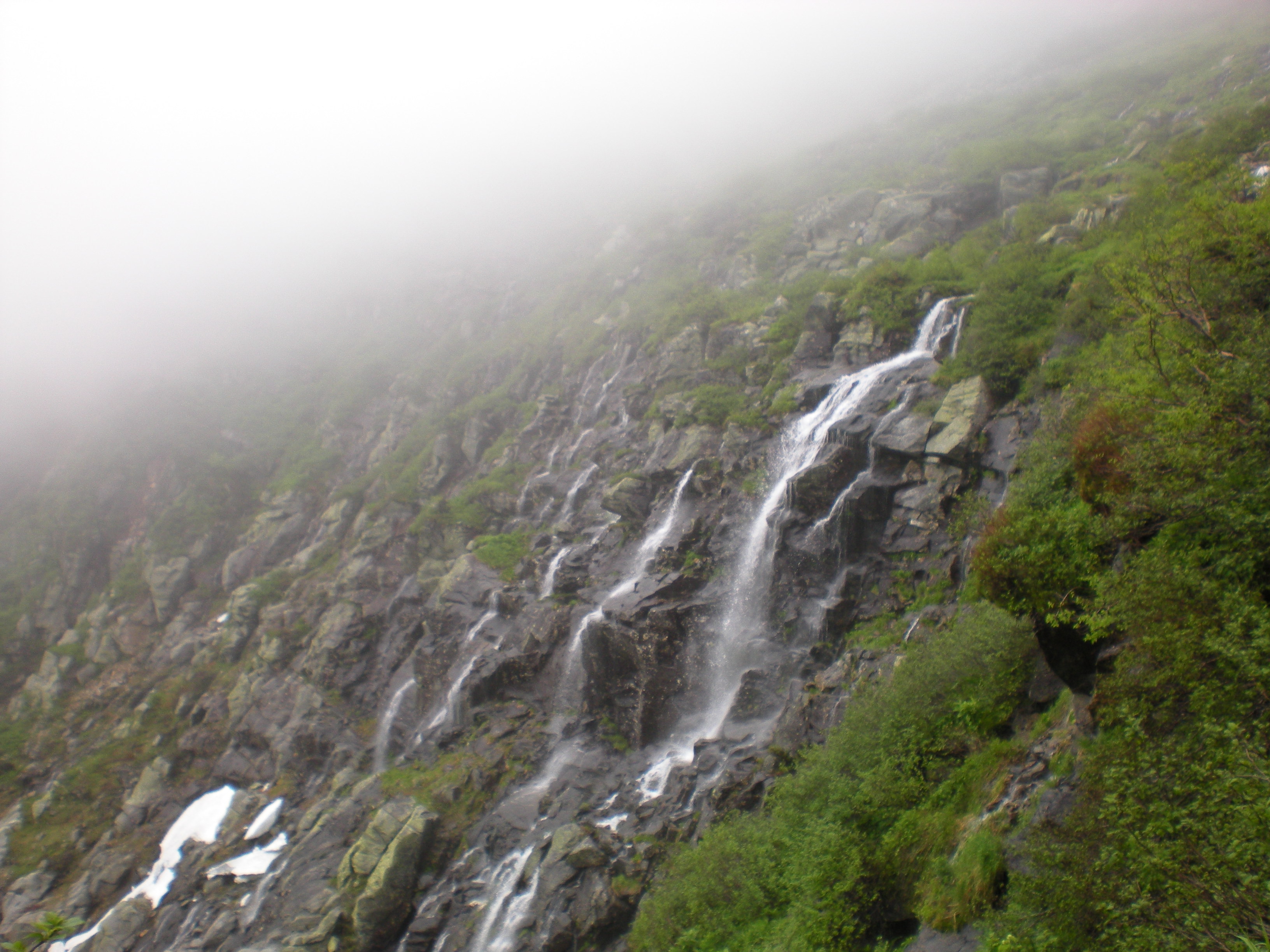 Going up the headwall we saw the "Snow Arch" where the stream rushes under a mantle of snow (left). It was impressive but I was a bit disappointed - I had expected the well-advertised Snow Arch to have more of a gothic character. Totally impressive while going up the headwall was the multitude of cascades tumbling down the rock (right). This with the wind howling, the clouds billowing, etc. made for an eerie experience. 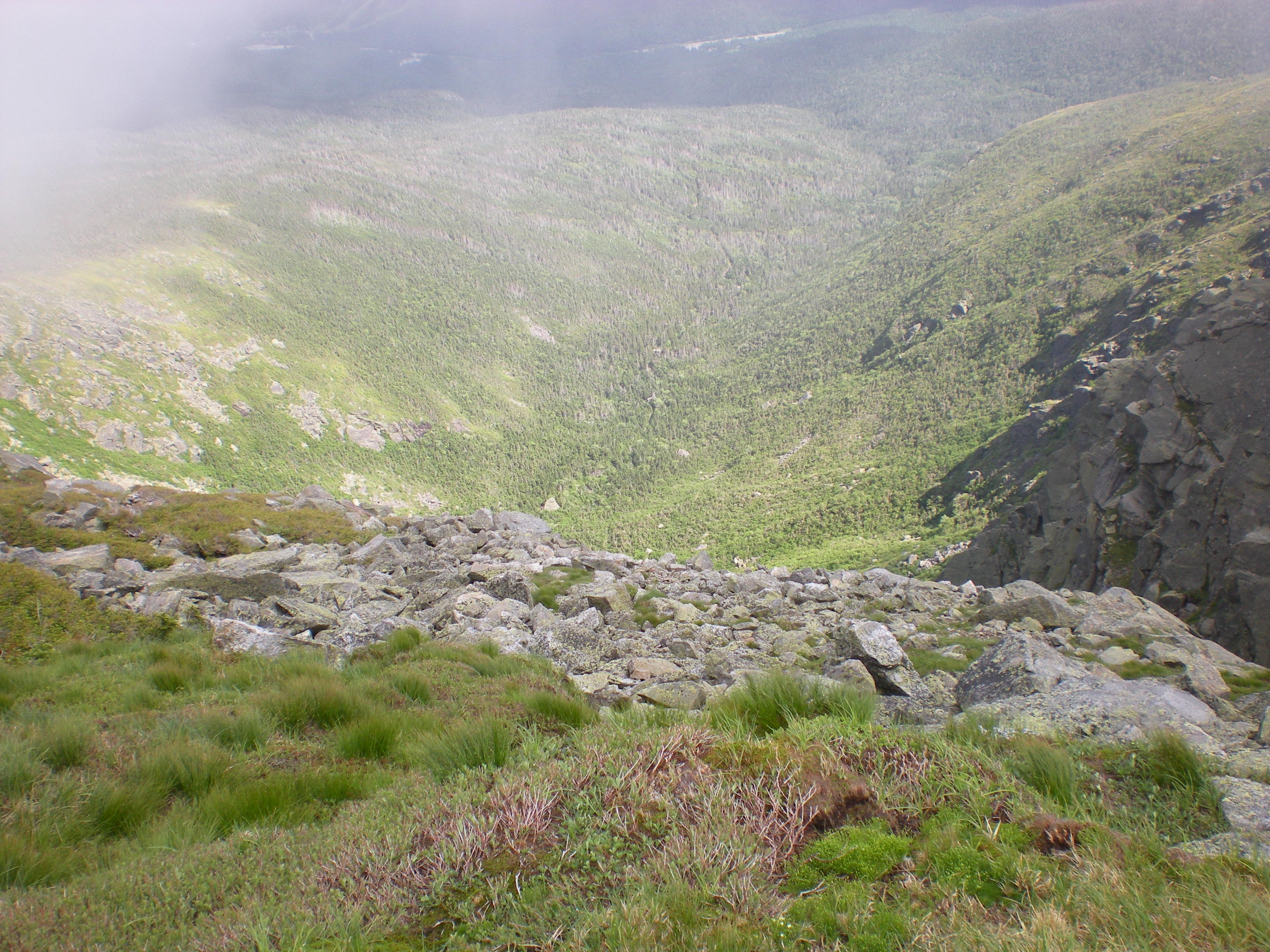 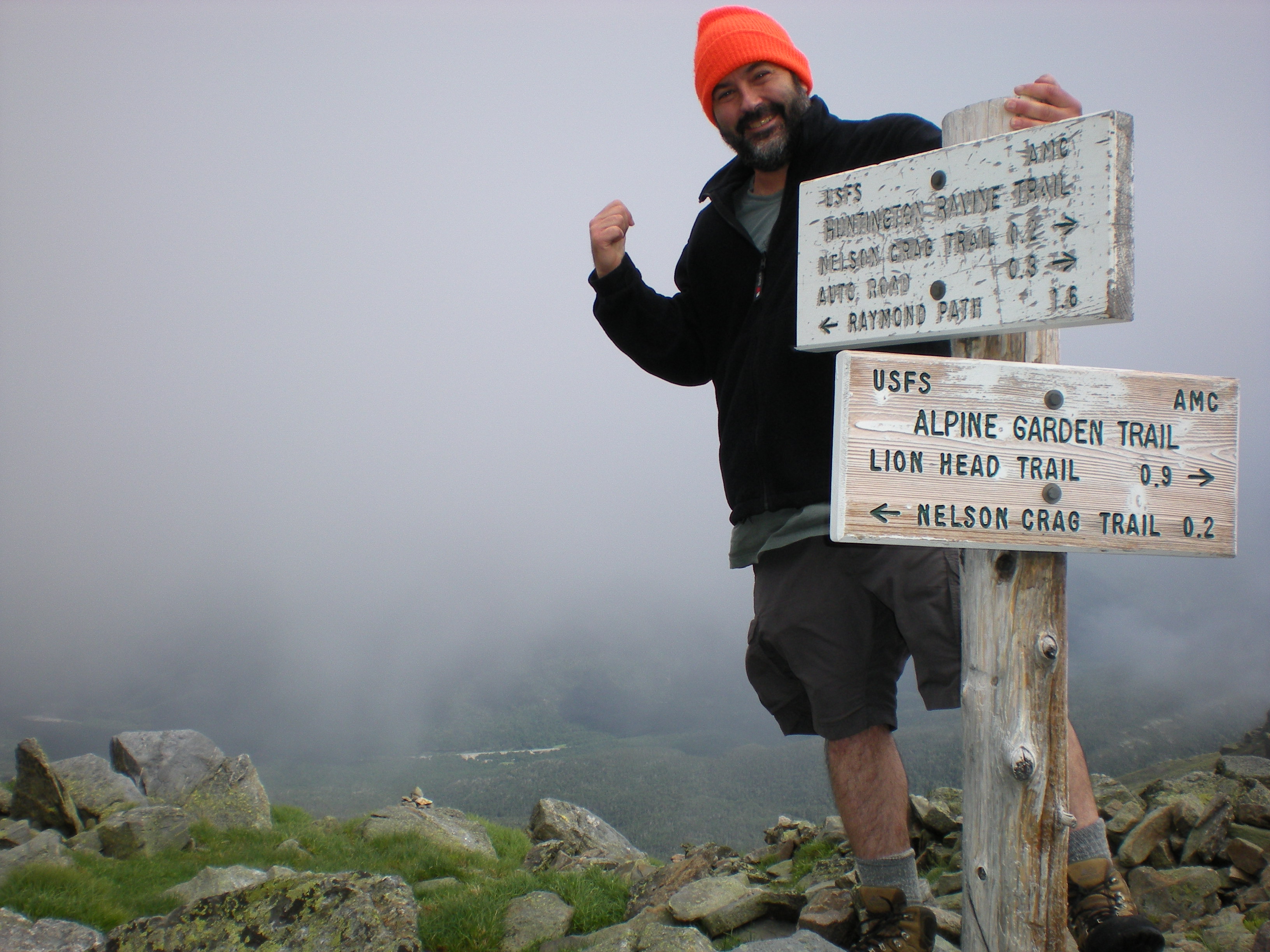 Our initial plan had been to go up to Mt. Washington but there was little point since it was so socked in. So once above the headwall we decided instead to hike the Alpine Garden Trail to Huntington Ravine Trail, hoping it would clear. I was also curious to check out Huntington, advertised as the steepest trail in the White Mtns and impassable going down. It did indeed look awful steep (left) and although I advertised my intention to go down (right) we did nothing of the sortand returned instead toward Lion's Head. 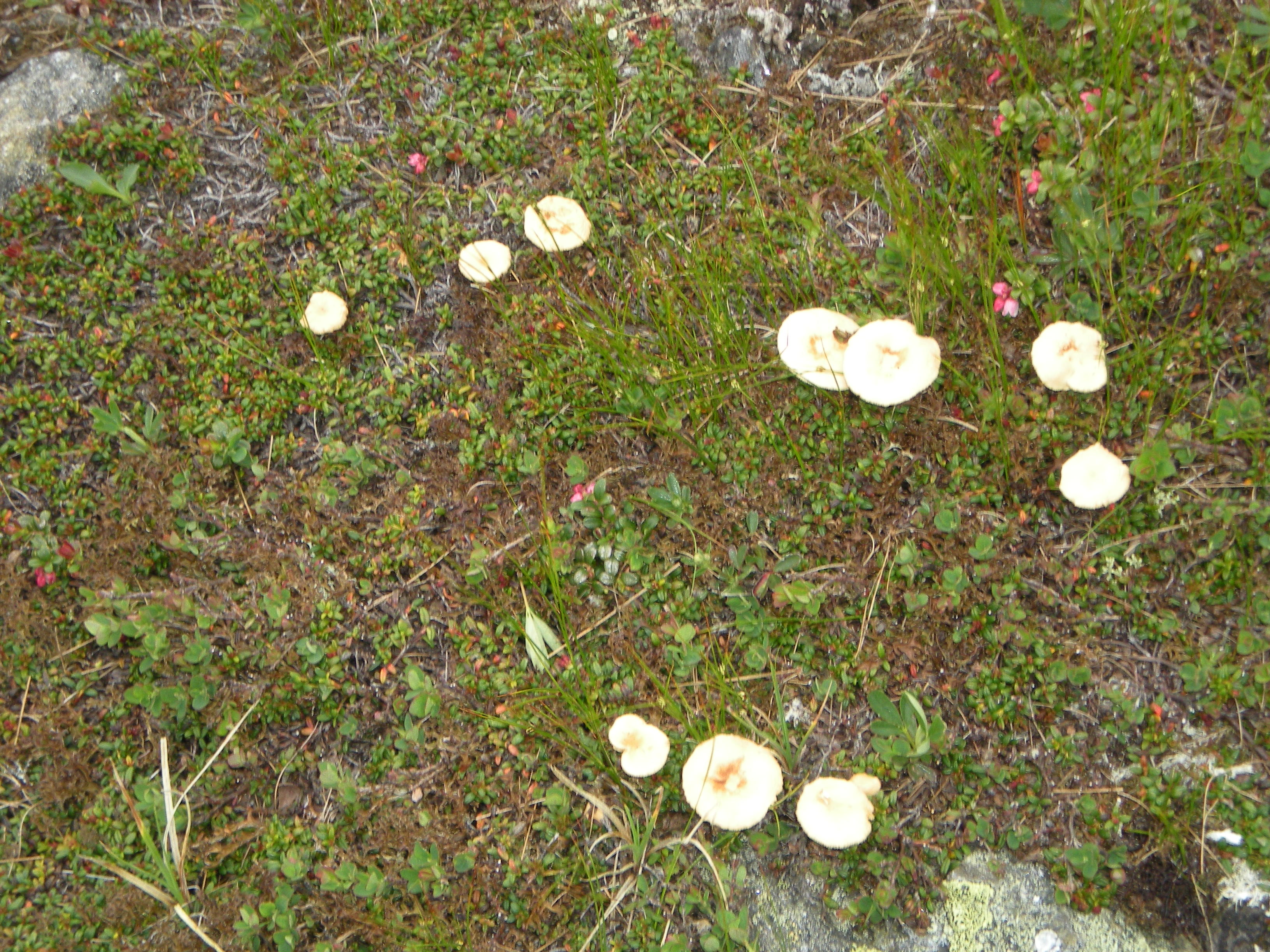 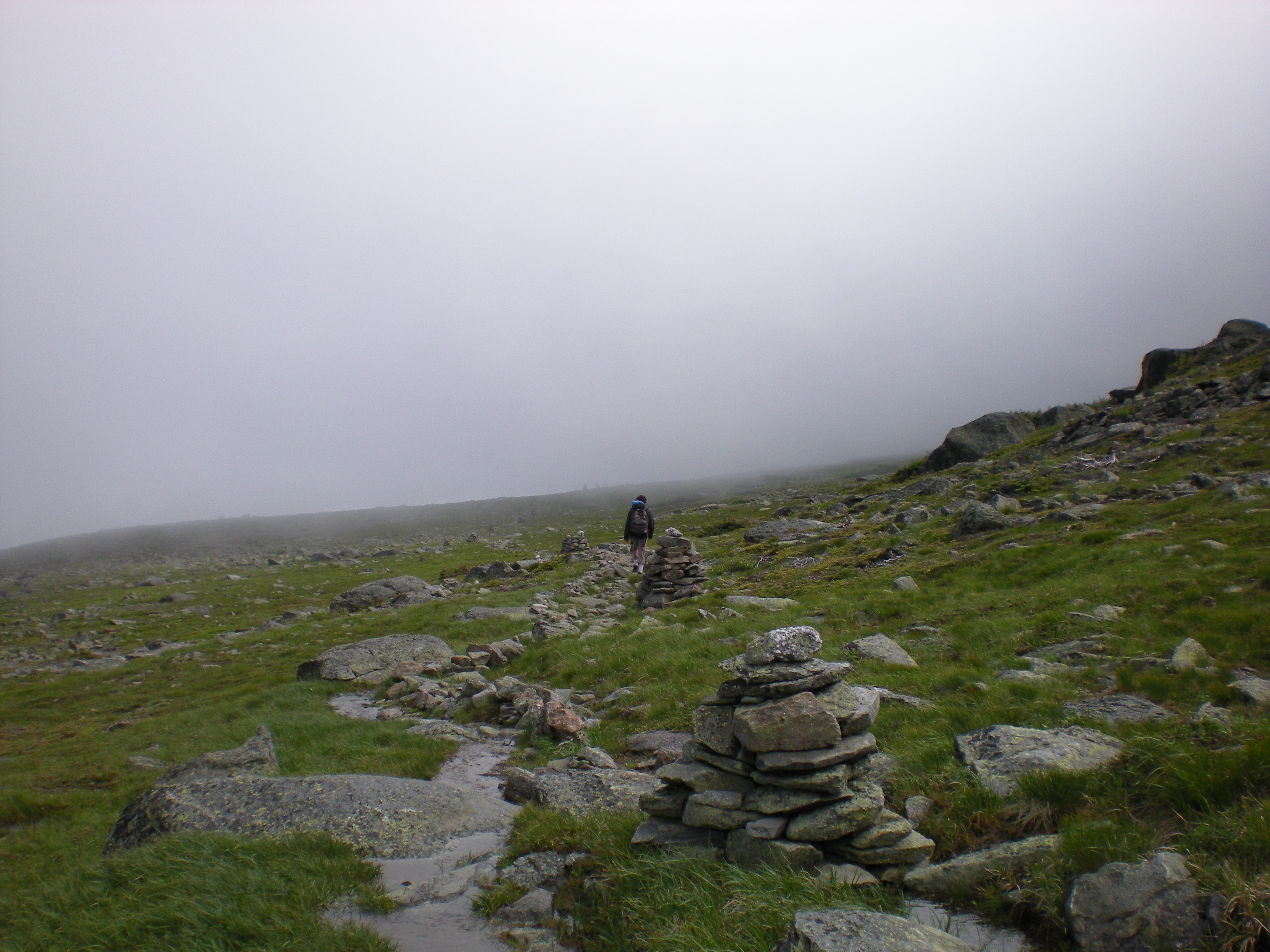 The Alpine Garden is truly a beautiful trail. It's perfectly flat, which is not to be discounted, and offers gorgeous above-treeline views. We had had an unusual amount of rain, which may explain why it was such a green lawn (right). I even saw mushrooms (left) - first time I have ever seen mushrooms above treeline. Without a lot of visibility to give us bearings I had the impression of being in Scotland or Ireland - sheep emerging from the fog would have completed the picture. 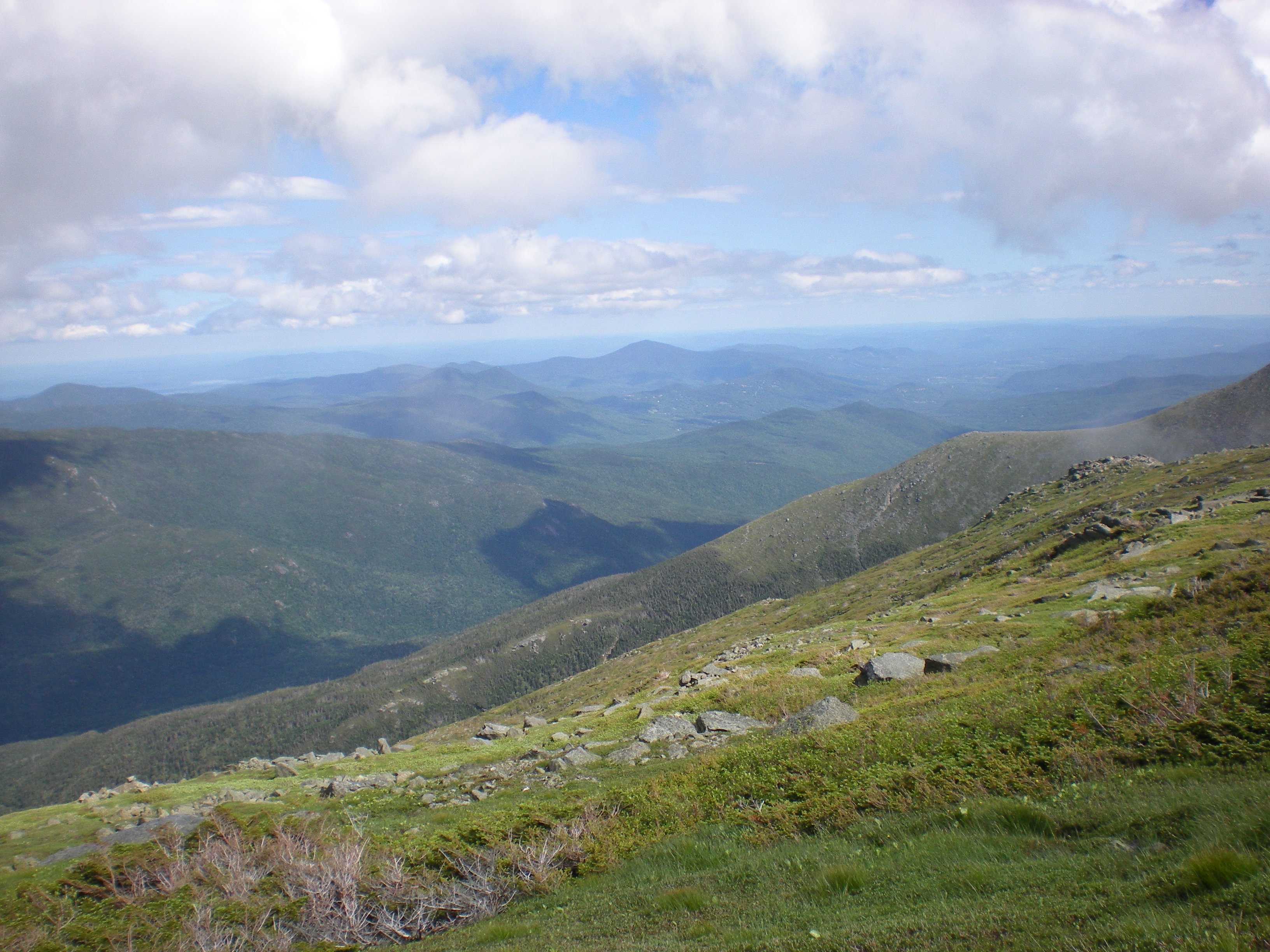 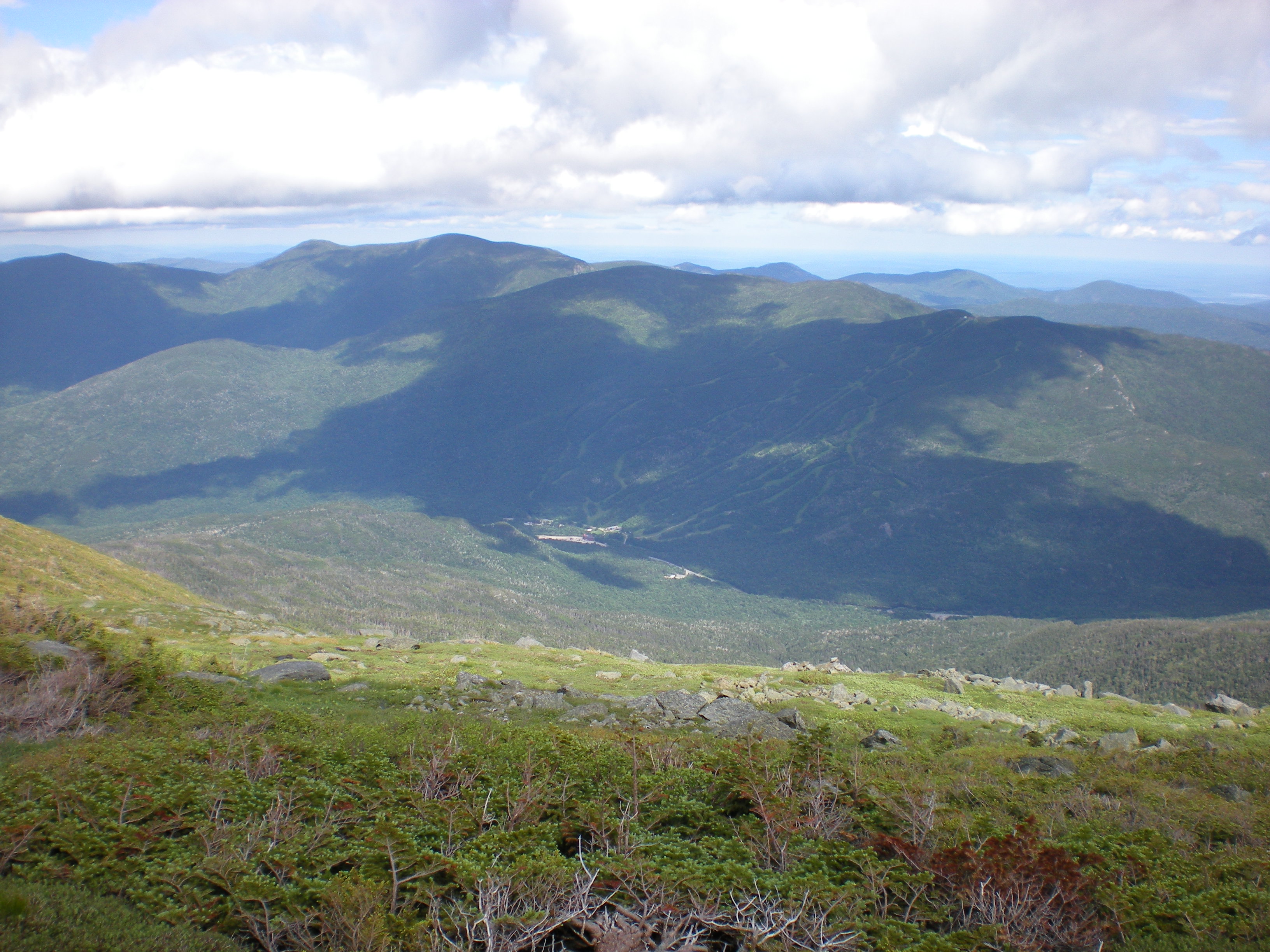 As we returned along the Alpine Garden towards Lion Head to head back down to Pinkham Notch, the fog which had tried to clear for a while vanished for good and we were rewarded with splendid views looking south towards Kearsarge (left) and looking west toward the Carter Range and the Widlcat ski area (right). But Mt. Washington above us remained immersed in fog. That part will be for another day!