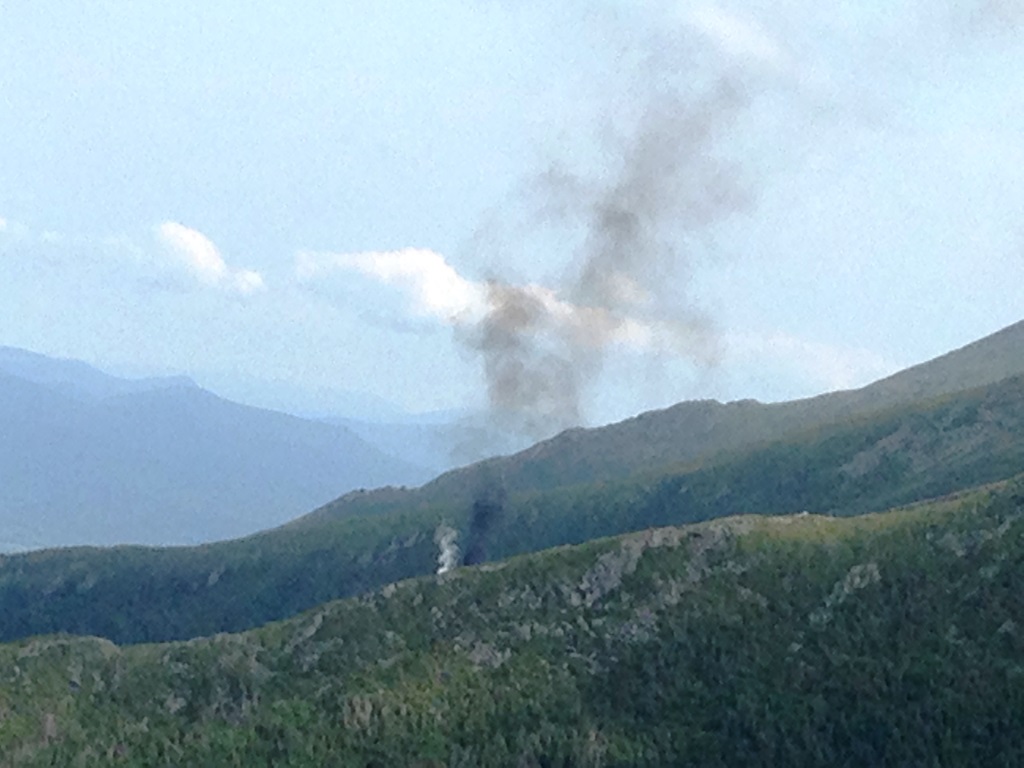 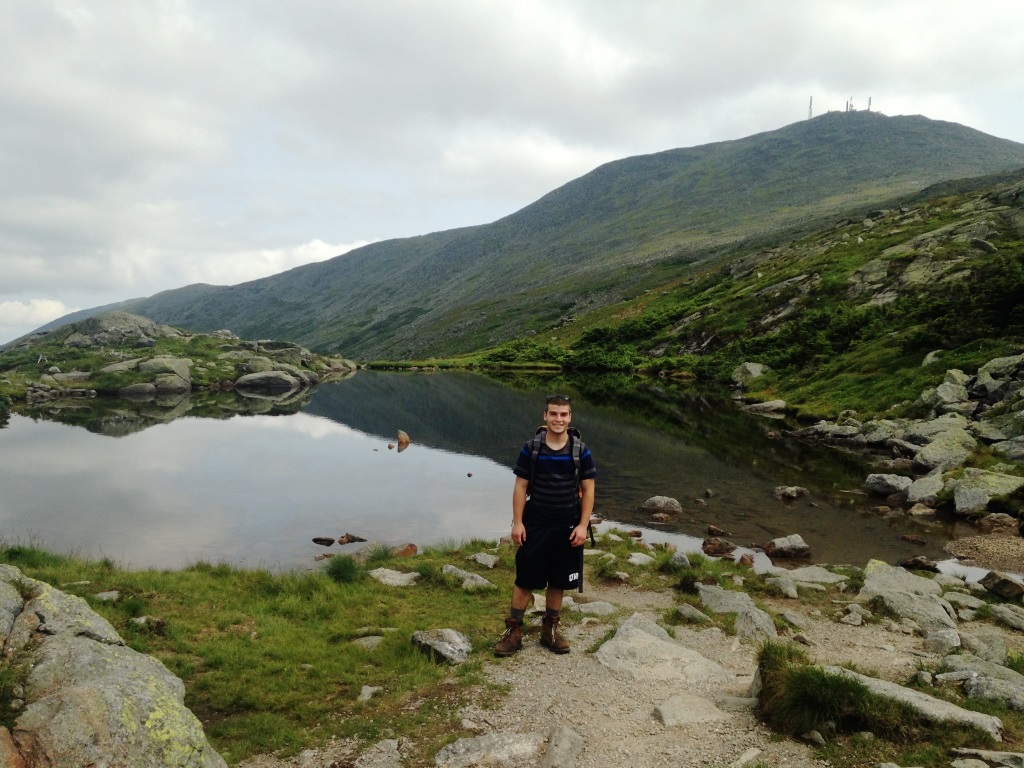 My son Alex has done all the 4,000 footers of New Hampshire but had not gone to the top of Mt. Washington since our Presidential Traverse trip with Oscar back in June 2004 (here are some pictures from that trip at Madison Hut, on Mt. Jefferson, on Gulfside Trail, on Mt. Clay). We climbed the Ammonoosuc Ravine Trail in time to watch the first Cog Railway train climb up to Mt. Washington (left). The first train of the day is allowed to use coal for tradition while subsequent ones must use electricity. The coal engine is notorious for black smoke but here I noticed in addition a white smoke plume, suggesting that the real power is provided by a clean engine and that the black smoke is just for perverse show. At the top of the Ammonoosuc Ravine Trail we stopped for a visit to Lake of the Clouds Hut and to the two ponds next to the hut which brought Alex memories (right). 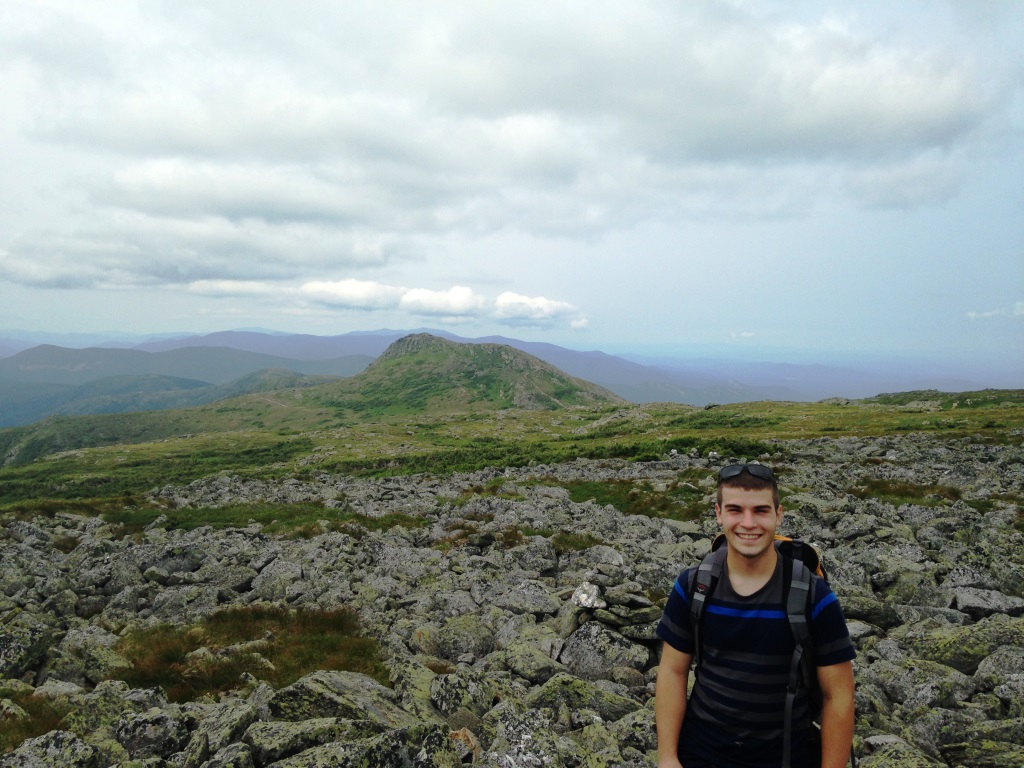 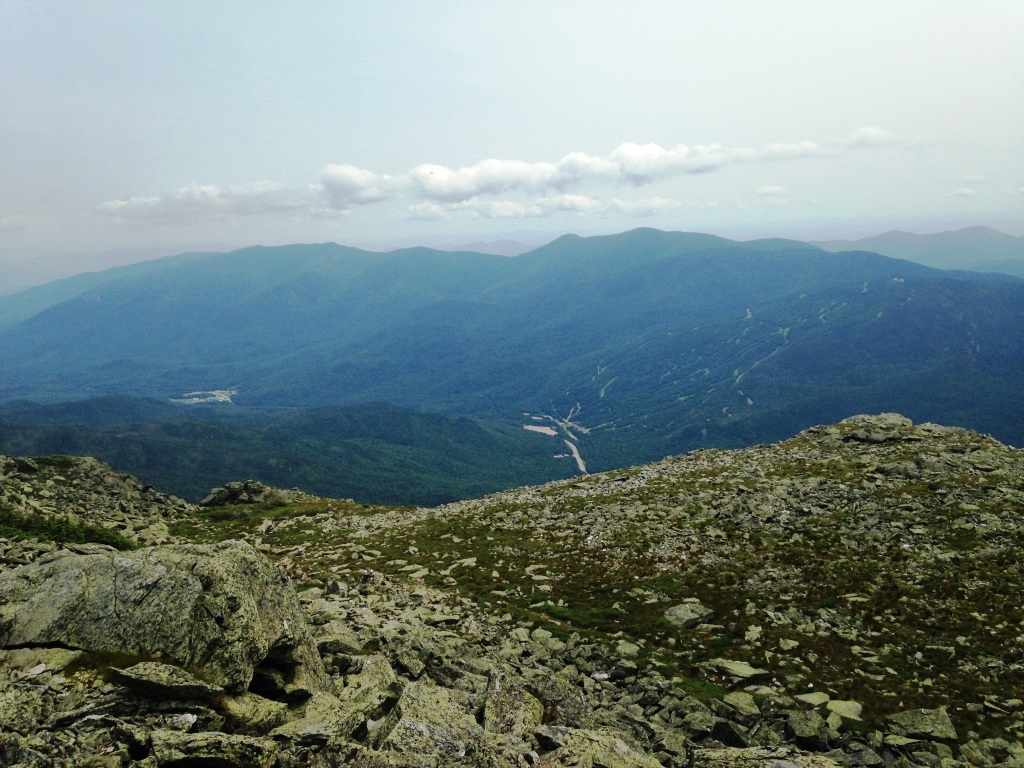 Crawford Path heading up to Mt. Washington was crowded so we went off on a detour by the Camel Trail and promptly left the crowds behind (left). It was a wonderful day to wander above treeline, with hardly any wind. We ended up at the Davis Path and turned right for a visit to Boott Spur and views of the Tuckerman Ravine headwall (right). This evoked memories of our past snowboard spring trips in the Ravine - here we are at the top of Left Gully in April 2008, right next to Boott Spur. 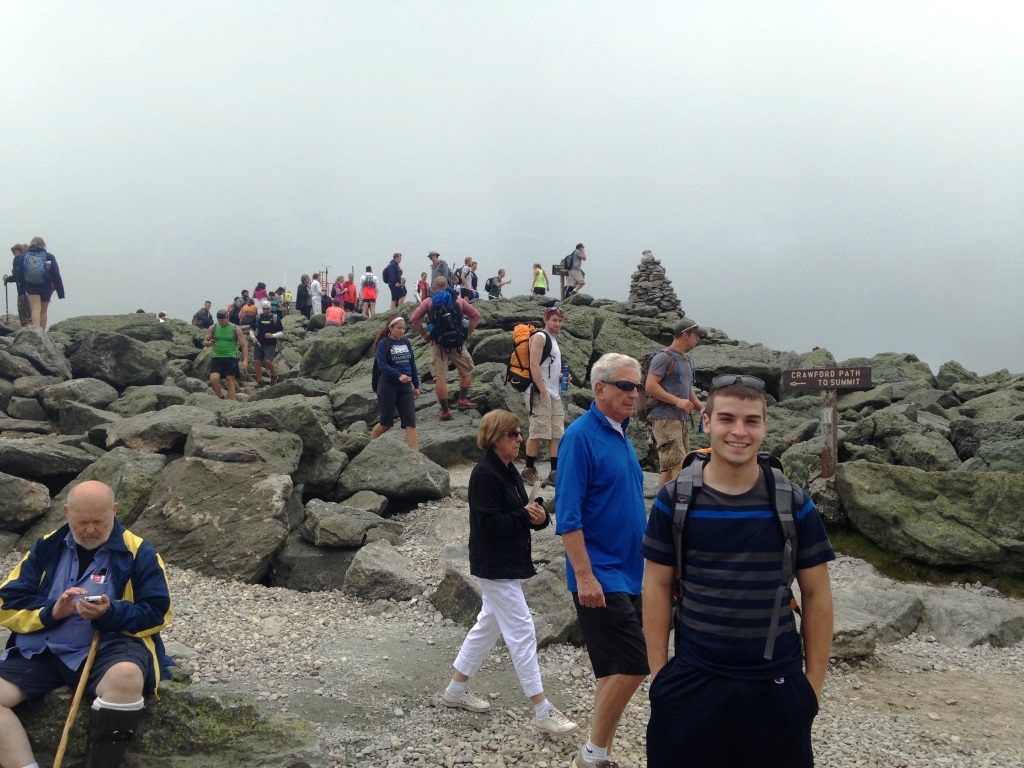 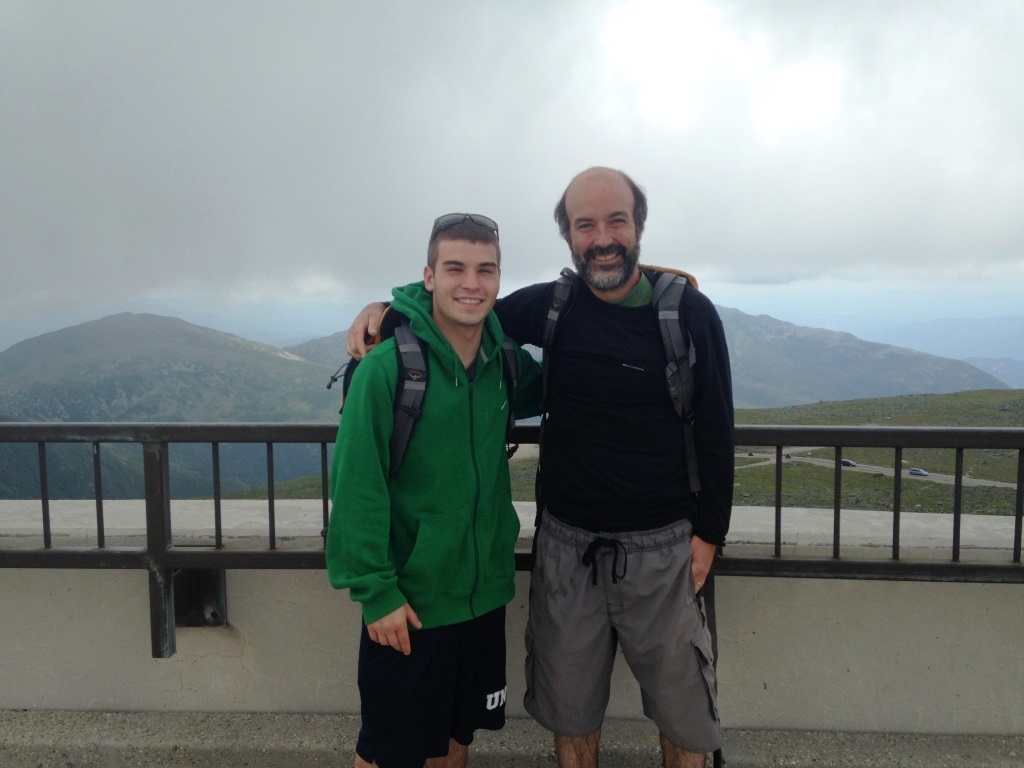 From Boott Spur we turned around and headed for Mt. Washington. There was hardly anyone on the Davis Path but when we got back on the Crawford Path the crowds were such that the final climb was a procession. That's really no problem because Mt. Washington is not a wilderness destination anyway! We got to the top and into the sea of humanity discharged by the Cog Railway (left). We went into the visitor's center for the new exhibit on Extreme Mt. Washington, small but nicely done. We went on the platform and got our picture taken (right). 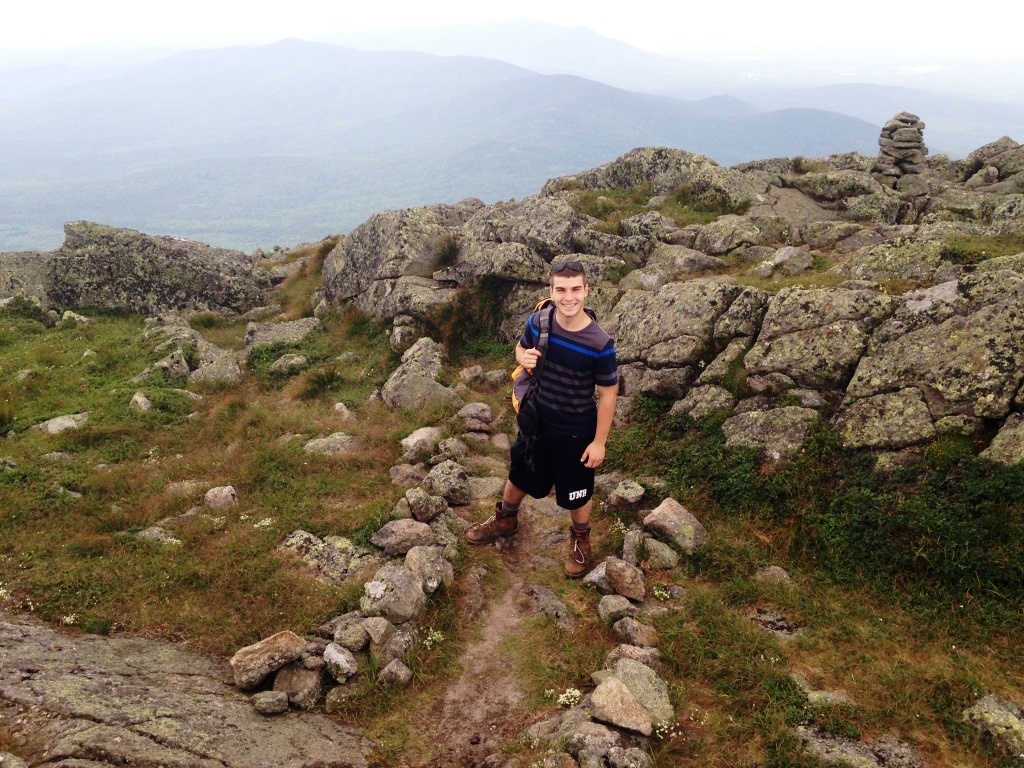 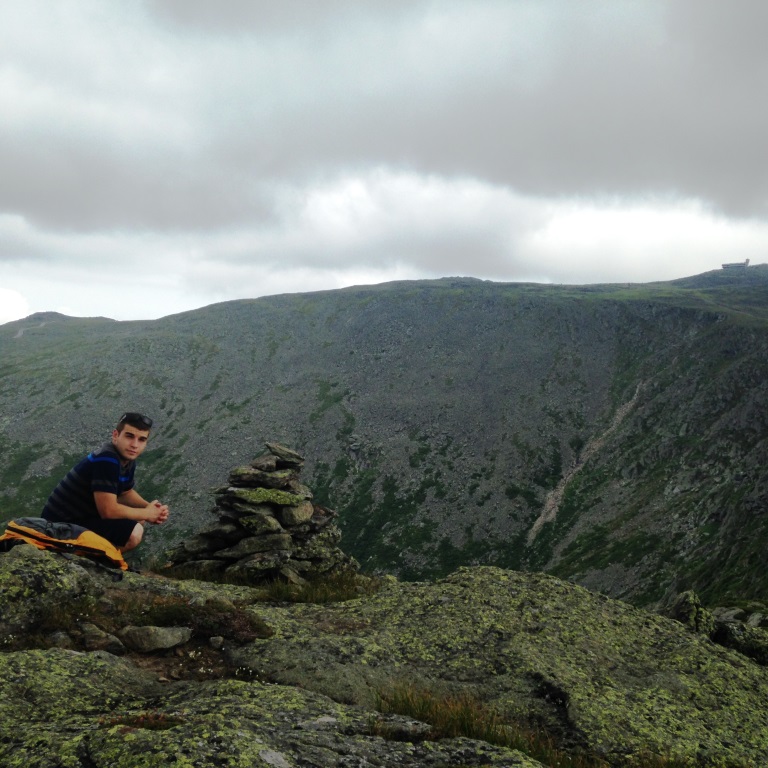 From there we then went down by the Trinity Heights Connector to the Gulfside Trail, and at the col with Mt. Clay we took the Mt. Clay Loop. I had maintained the Mt. Clay Loop for the AMC for three years (2010-2012) and wanted to see how it was holding up. It was in very good shape. I made some minor repairs to the scree wall that I had built on the southern peak back in 2011 and after that it looked good as new (left). We then looked for the cairn that Alex and I had built in 2010 when he did a trail maintenance trip with me. We found the cairn near the northern peak (right) and took the same picture that we had made after we built it in 2010. Notice how the top is gone, testimony of how strong the wind can be. We fixed it and then cut through the rocks to get back to the Gulfside Trail and then on to the Jewell Trail for the trip down.