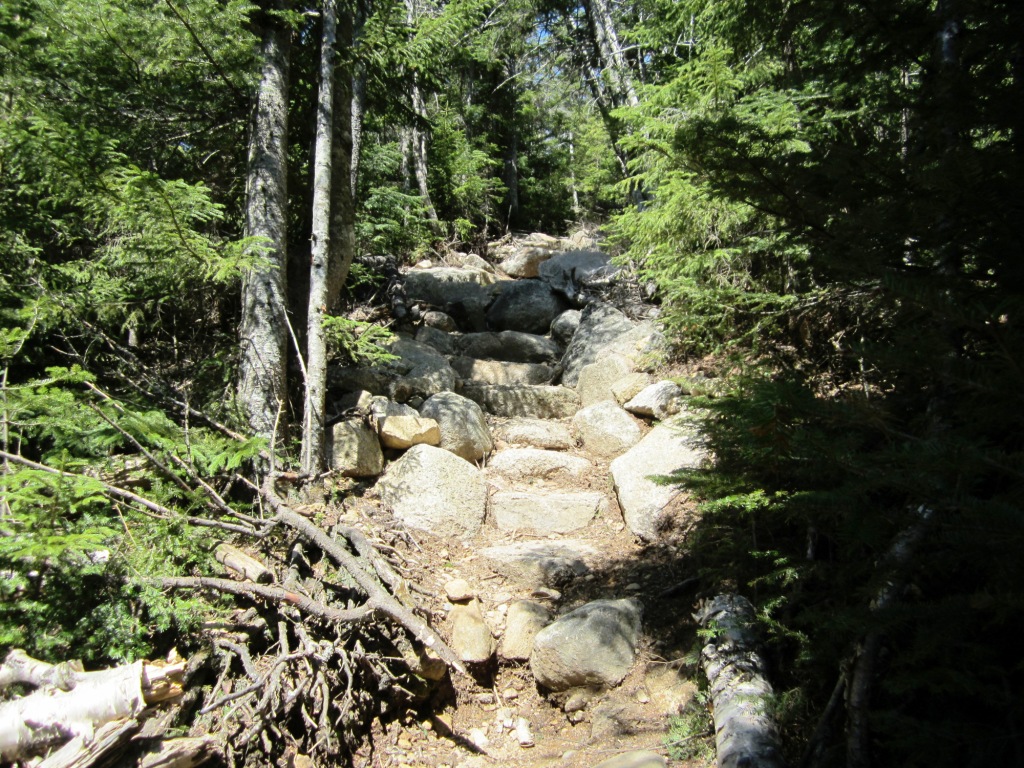 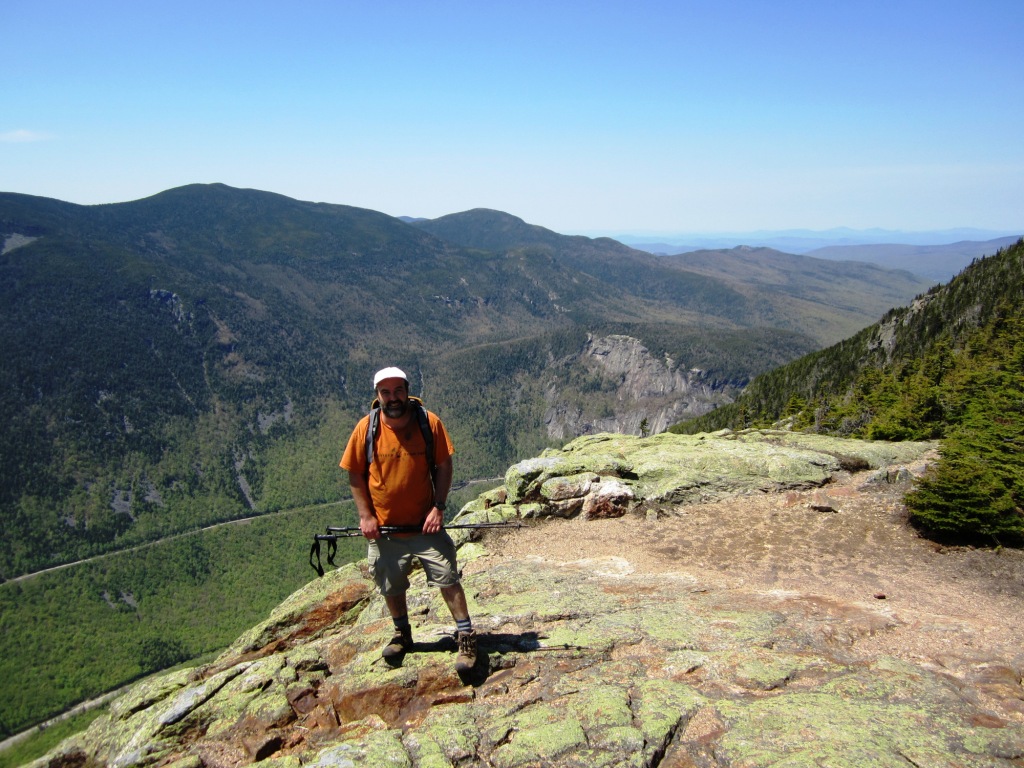 Webster Cliff trail is part of the Appalachian Trail and the AT gateway to the Presidential Range. It starts from a low trailhead (1,275') and climbs to Mt. Webster (3,910'), the southernmost peak of the range, by way of the spectacular Webster Cliffs that form the wall of Crawford Notch. I had previously done that trail several years ago with my son Alex and we were in fog most of the way. This time I climbed it with Roger Gagne under more favorable weather. The trail climbs steeply out of Crawford Notch but with some great trailwork such as these rock stairs (left). At 3,000' it breaks in the open for the first of a series of ledges with great views of Crawford Notch (right). 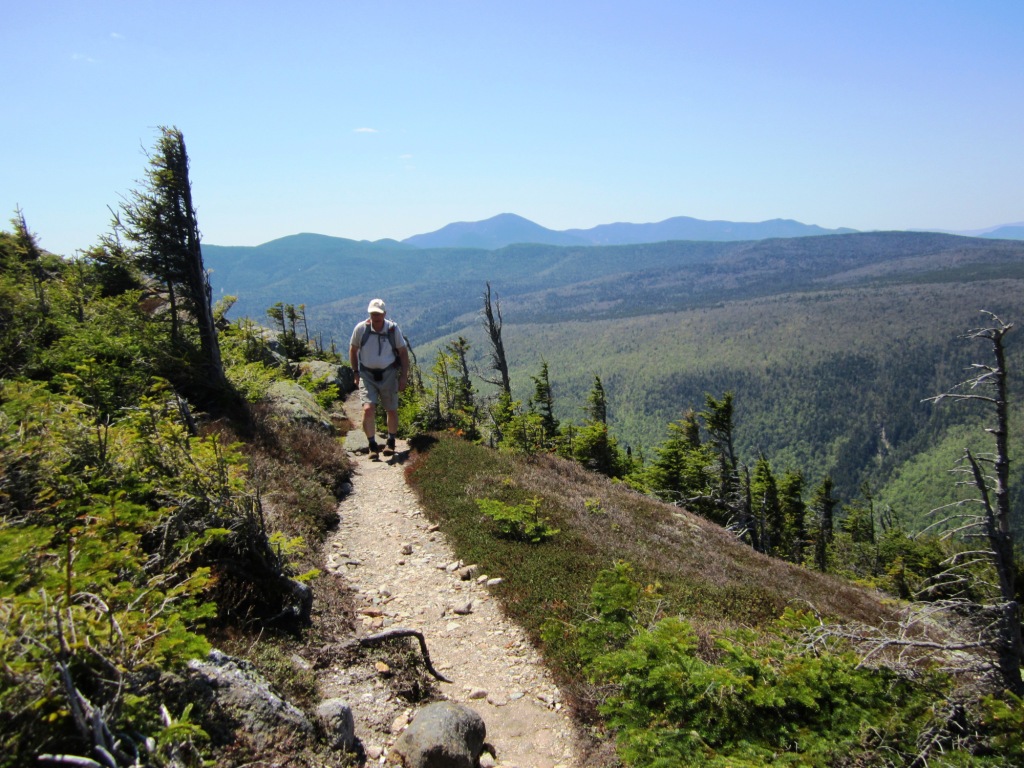 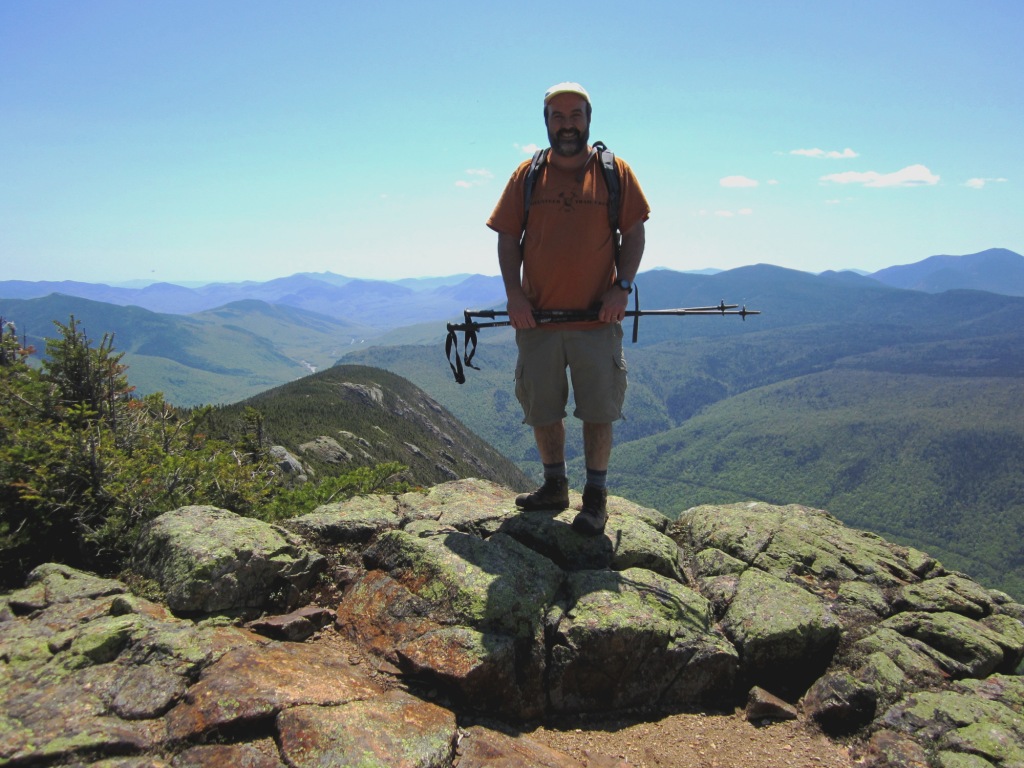 Beyond that the trail is spectacular as it follows the rising Presidentials ridge, frequently in the open (left). Most interesting is the unique view to the south, looking over the cliffs towards the Saco Valley and with a multitude of mountains in the background (right). At one point a broad ledge gave us views over the other side of the ridge, to the east and with Mt. Washington in the background (below left). There were just a few specks of snow left in Oakes Gulf. 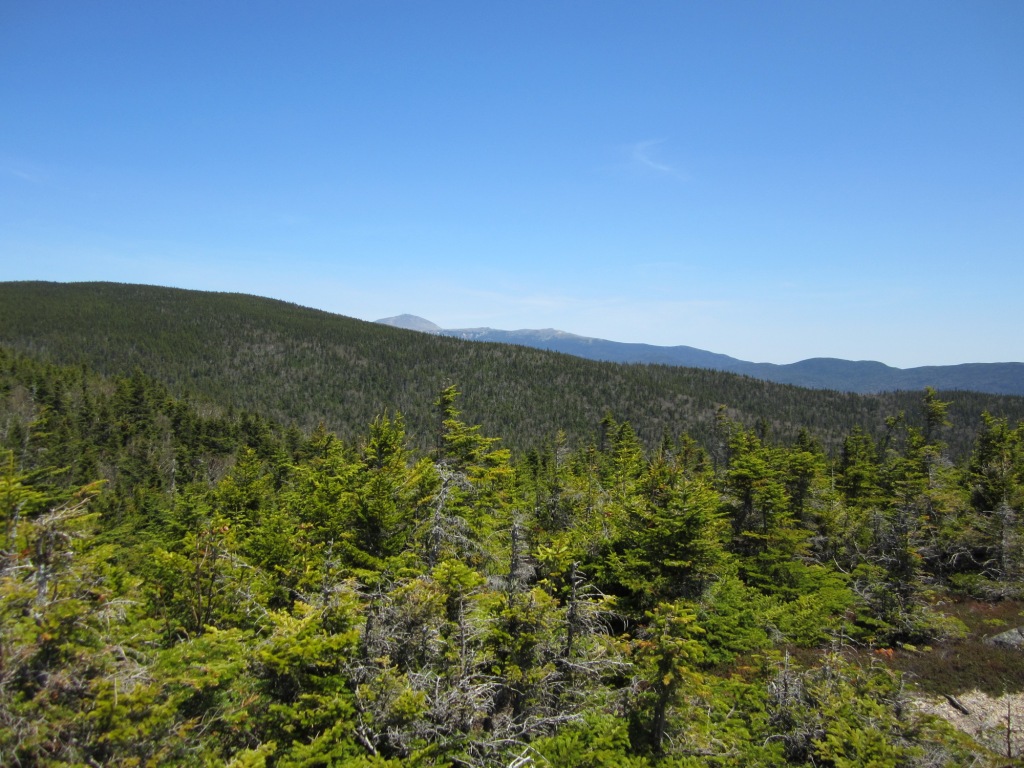 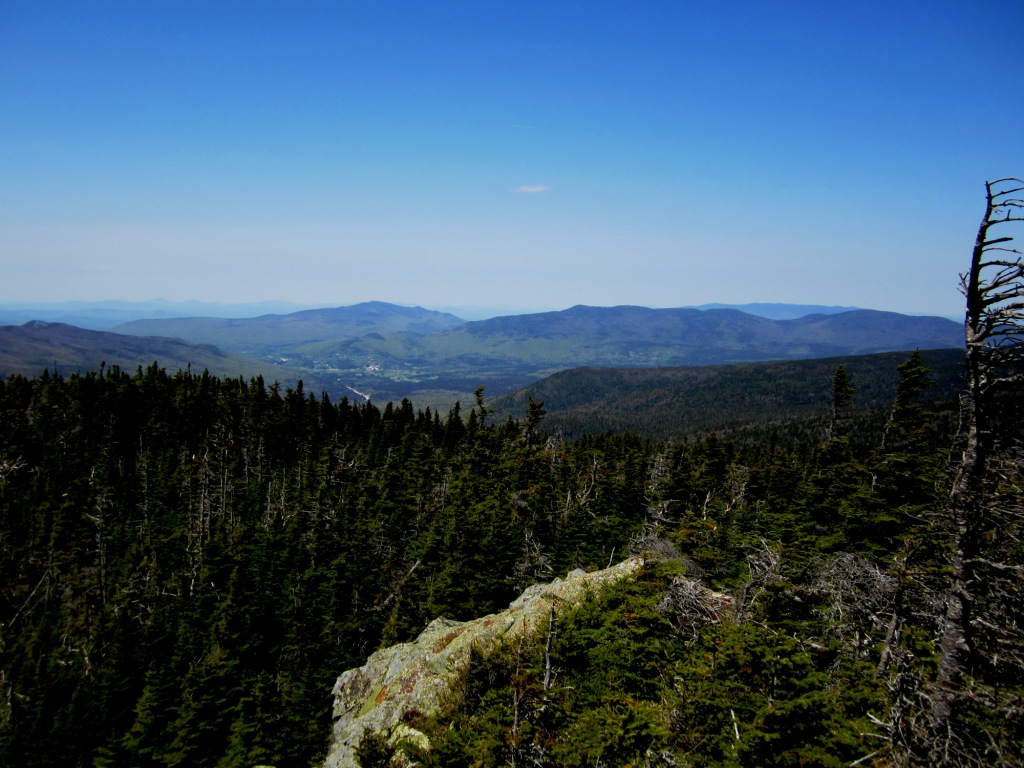 In this manner we got to the top of Mt. Webster, which opened a view on the other side of Crawford Notch toward the Ammonoosuc Valley and Bretton Woods (right). But after the expansive views from the cliffs we found the views from Mt. Webster to be a bit of letdown. Also, there was a very big crowd at the top - it turns out that a group of about 50 Koreans had decided on that day for an outing and had climbed Mt. Webster from the other side (Webster-Jackson Trail). Not much for solitude. So we quickly took off to continue the Webster Cliff Trail along the Presidentials ridge toward Mt. Jackson (4,050'), which is a great summit with 360 degrees view. The Webster-Jackson Loop is a classic hike of the Whites and I have done it many times. The ridge walk from Webster to Jackson doesn't have much for views but is very nice over ledgy terrain. 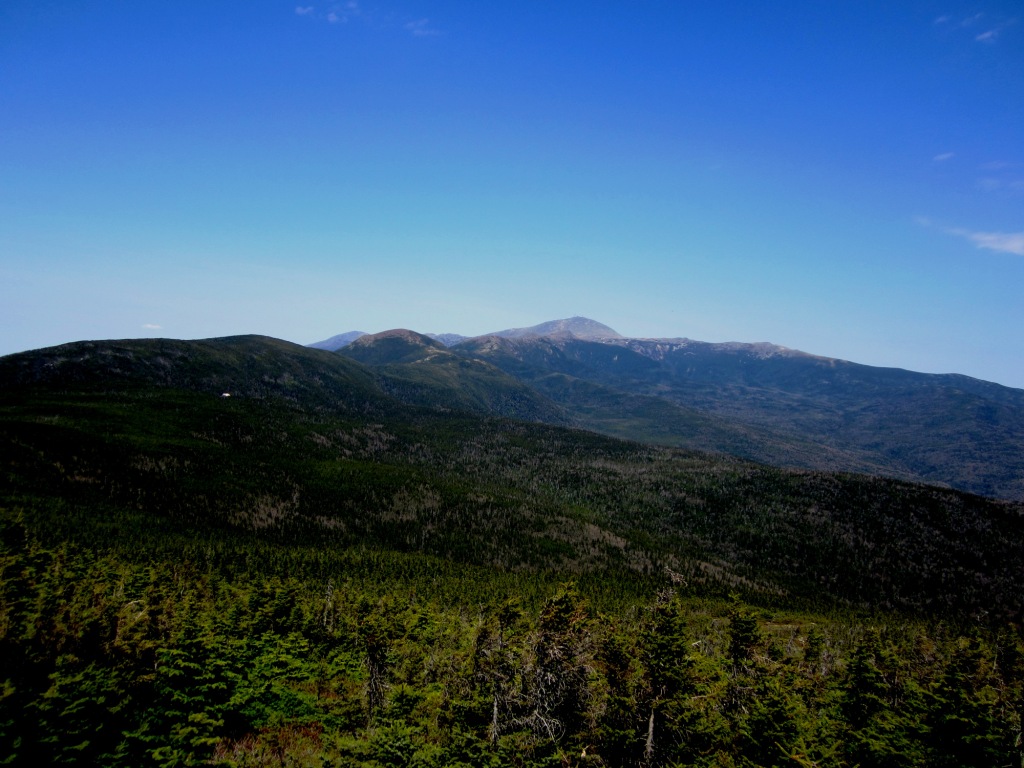 Alas, the Korean club had also started heading to Mt. Jackson and as a result the trail was a procession. This is why the AMC has a rule against parties of more than twelve people - a large group, even considerate, really affects others' hiking experience. We found the same loud crowd at the top of Mt. Jackson, and after taking a quick picture of the view toward Mt. Washington (left) I decided to continue on to Mitzpah Hut and Mt. Pierce, the next points on the Presidentials ridge. Roger preferred to stay on Mt. Jackson and descend by the Webster-Jacskson Trail, so we separated with plan to meet at the trailhead. I had actually never done the portion of the Webster Cliff Trail from Mt. Jackson to Mitzvah Hut and it was great - I definitely left the crowds behind. The trail followed the Presidentials Ridge with a lot of little ups and downs, including several open swampy areas crossed on bog bridges (right). 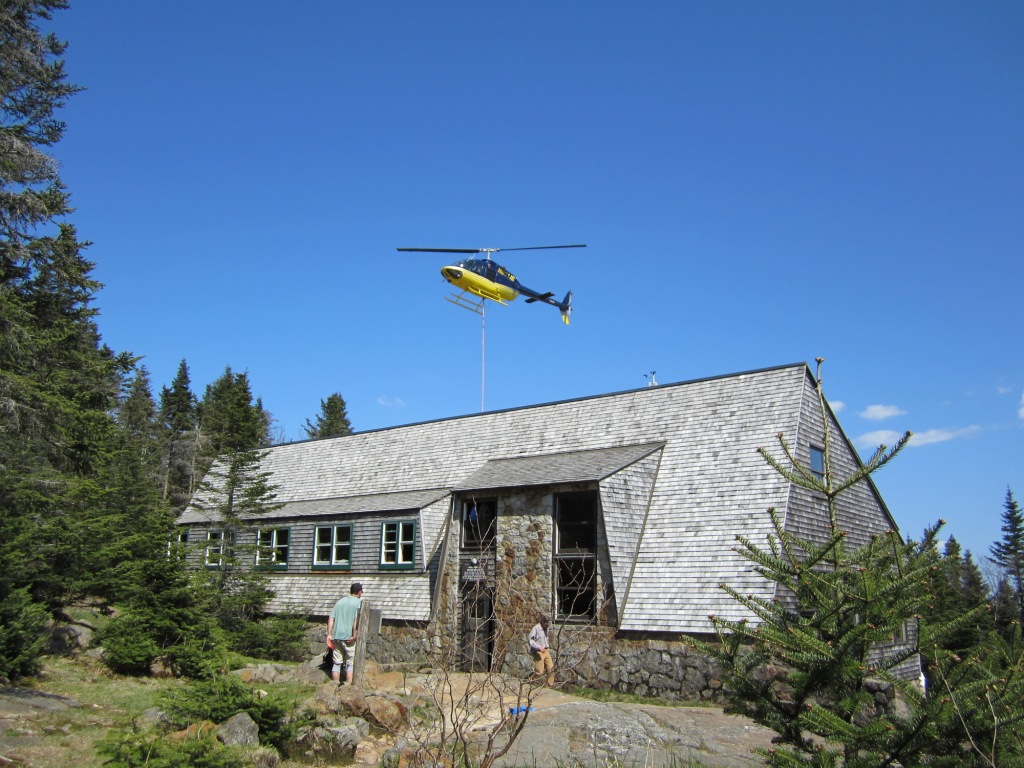 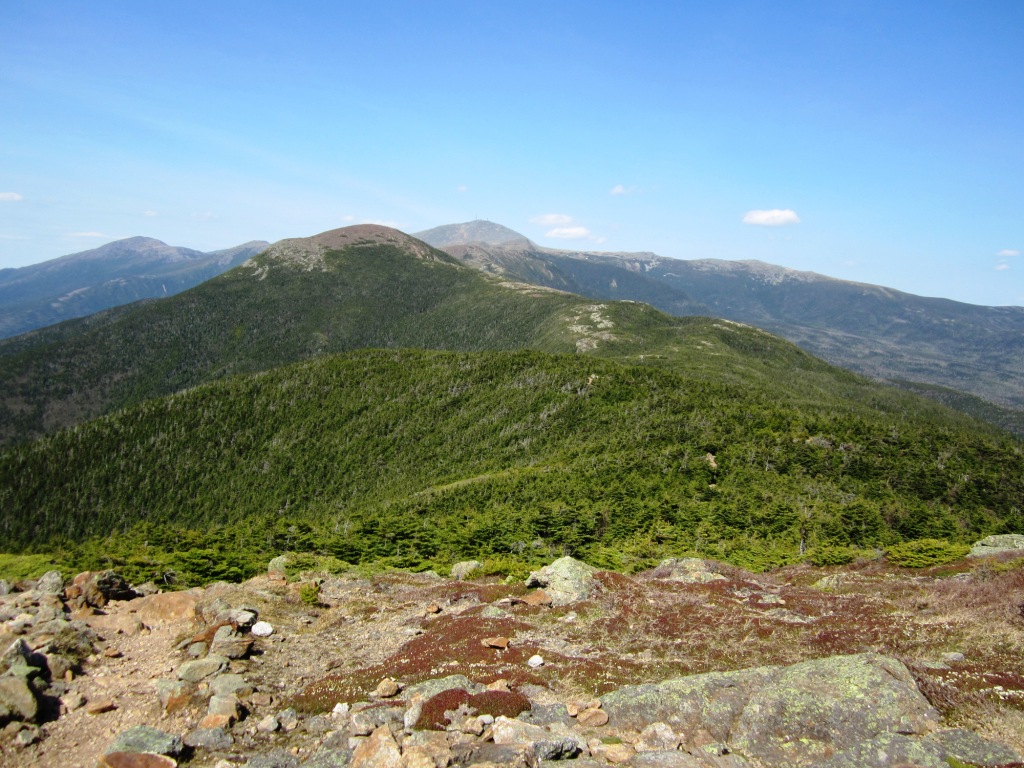 As I approached Mitzpah Hut I started to hear the buzz of a helicopter, becoming louder and louder. I finally realized that this was the copter doing the yearly supply to the hut and raced to take a picture (left). The hut crew was there taking delivery. From Mitzpah I did the steep climb to Mt. Pierce (4,310'), a beautiful summit that features some tundra vegetation despite its low altitude (right). I then went quickly down the Crawford Path back to the trailhead. The Crawford Path is the oldest hiking path in North America (cut in 1819) but I don't really like it - it's wide and rough and rocky and not particularly interesting. But it's a way down, and I met Roger at the trailhead from which a quick hitch-hike brought us back to the car at the Webster Cliff trailhead.