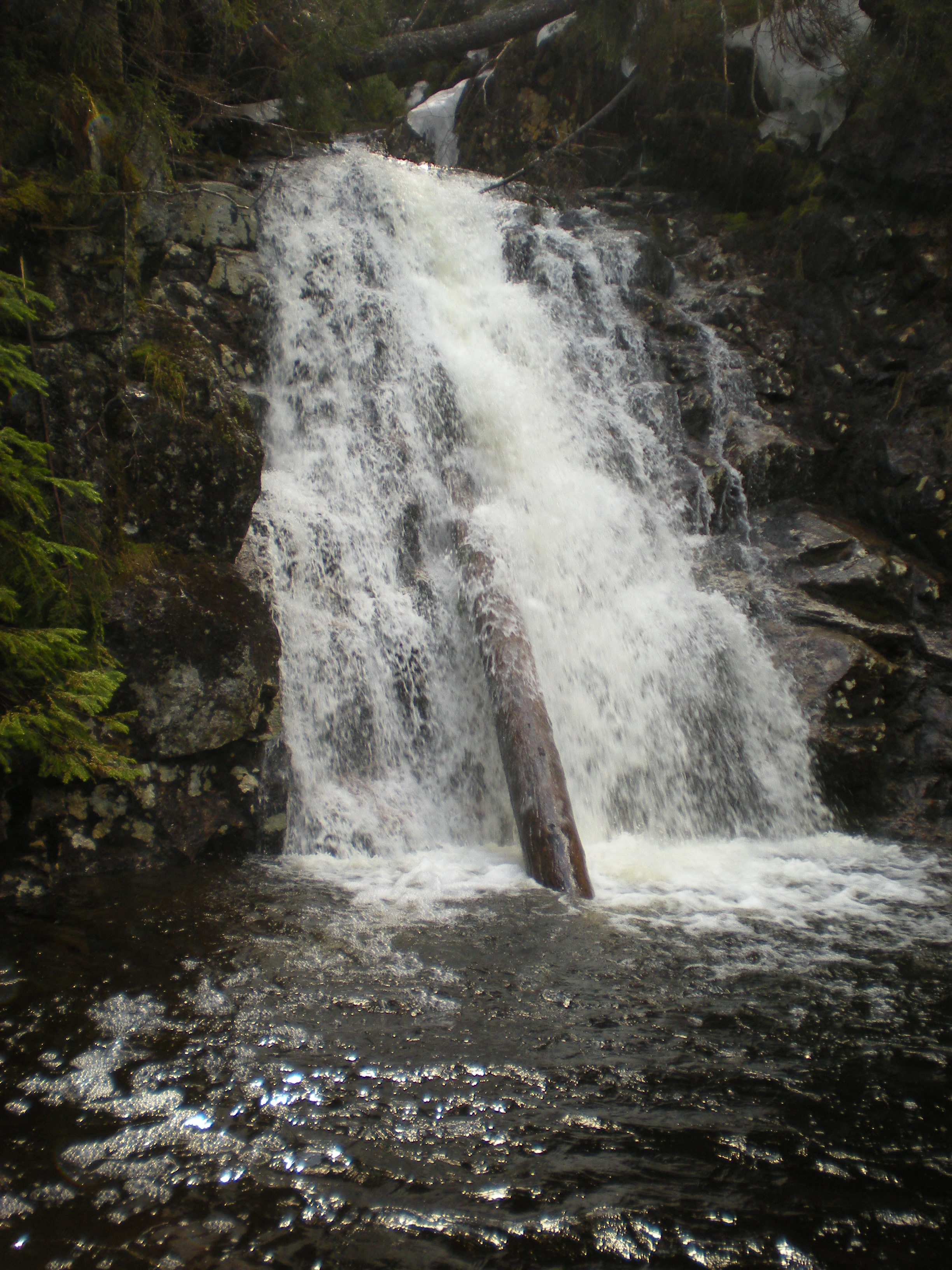 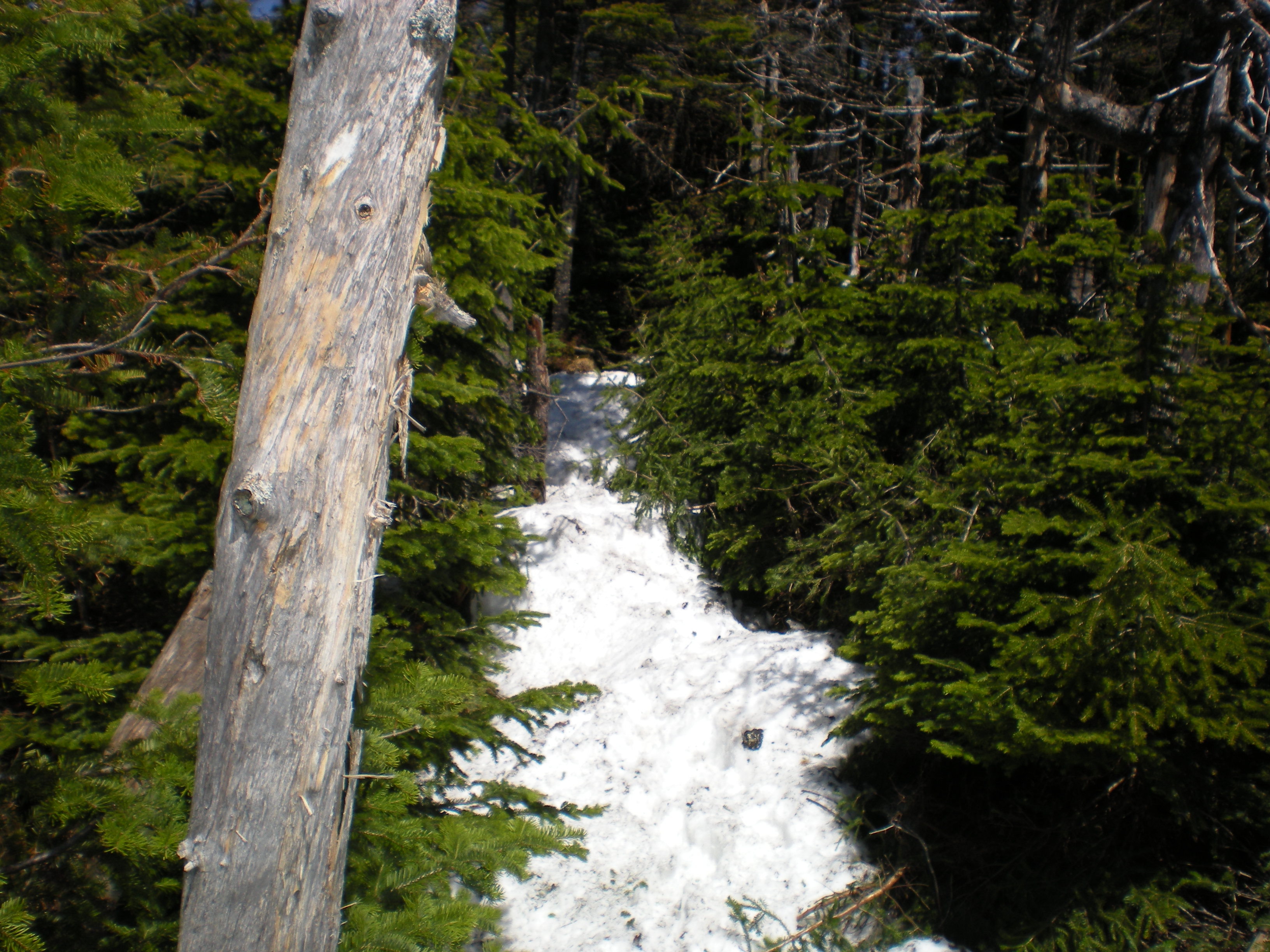 May in the White Mountains is thankfully known as the mud season, which keeps the crowds away. In fact it's not bad at all but you have to be prepared for snow. On this beautiful Sunday (not a cloud in the sky), I did the Webster-Jackson Loop with Roger Gagne and Peter Wyatt. Roger and I had done that same hike last year on the hottest day of the year, and what a difference it was. Snowmelt and dormant trees produced a spectacular waterfall along the trail (left) that we hadn't even noticed in August. At 3,100' we hit solid snow on the trail (right). I was glad I had my poles. The narrow center of the trail was generally OK because of compaction by previous hikers, but there still was a lot of postholing. 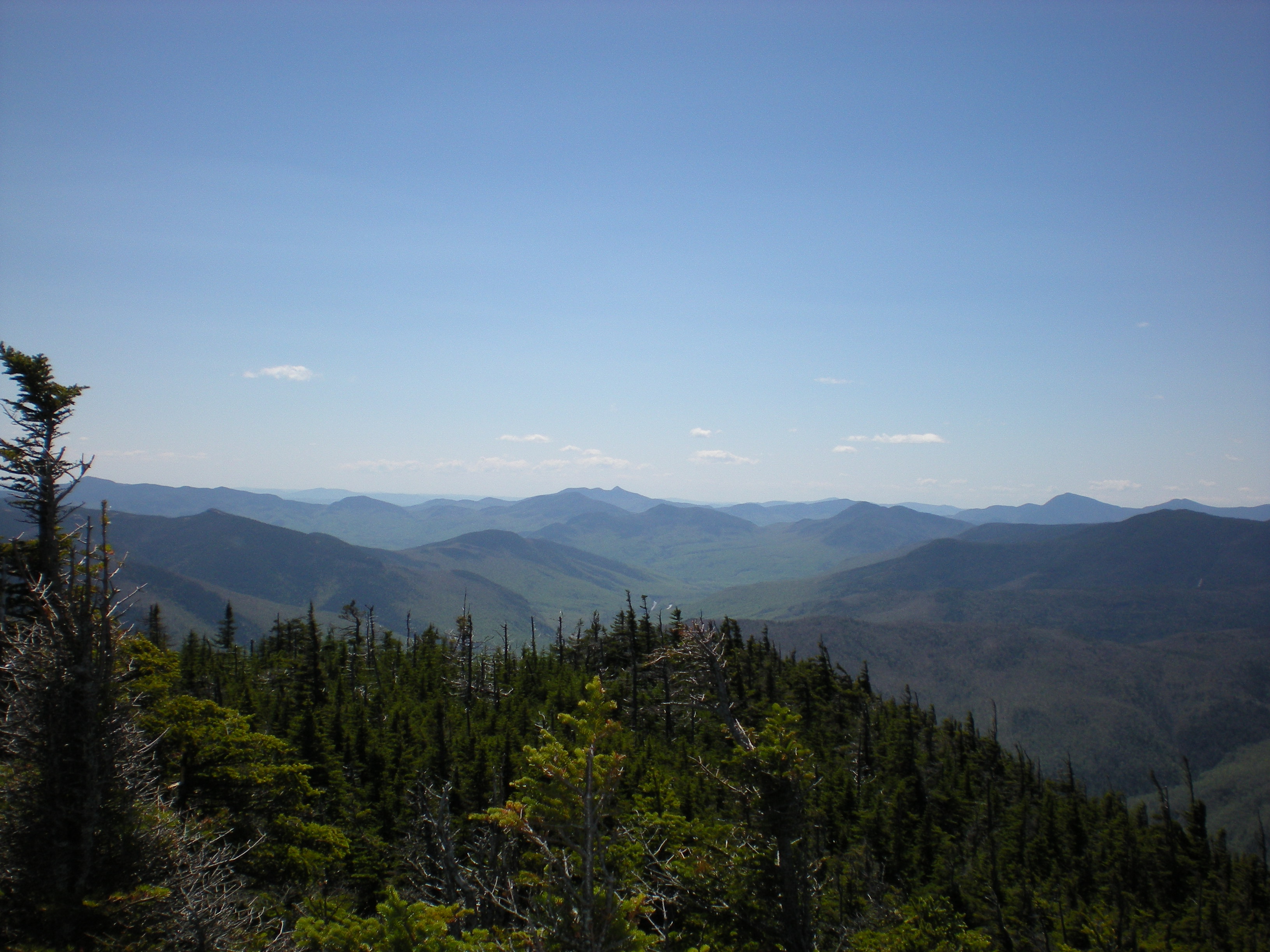 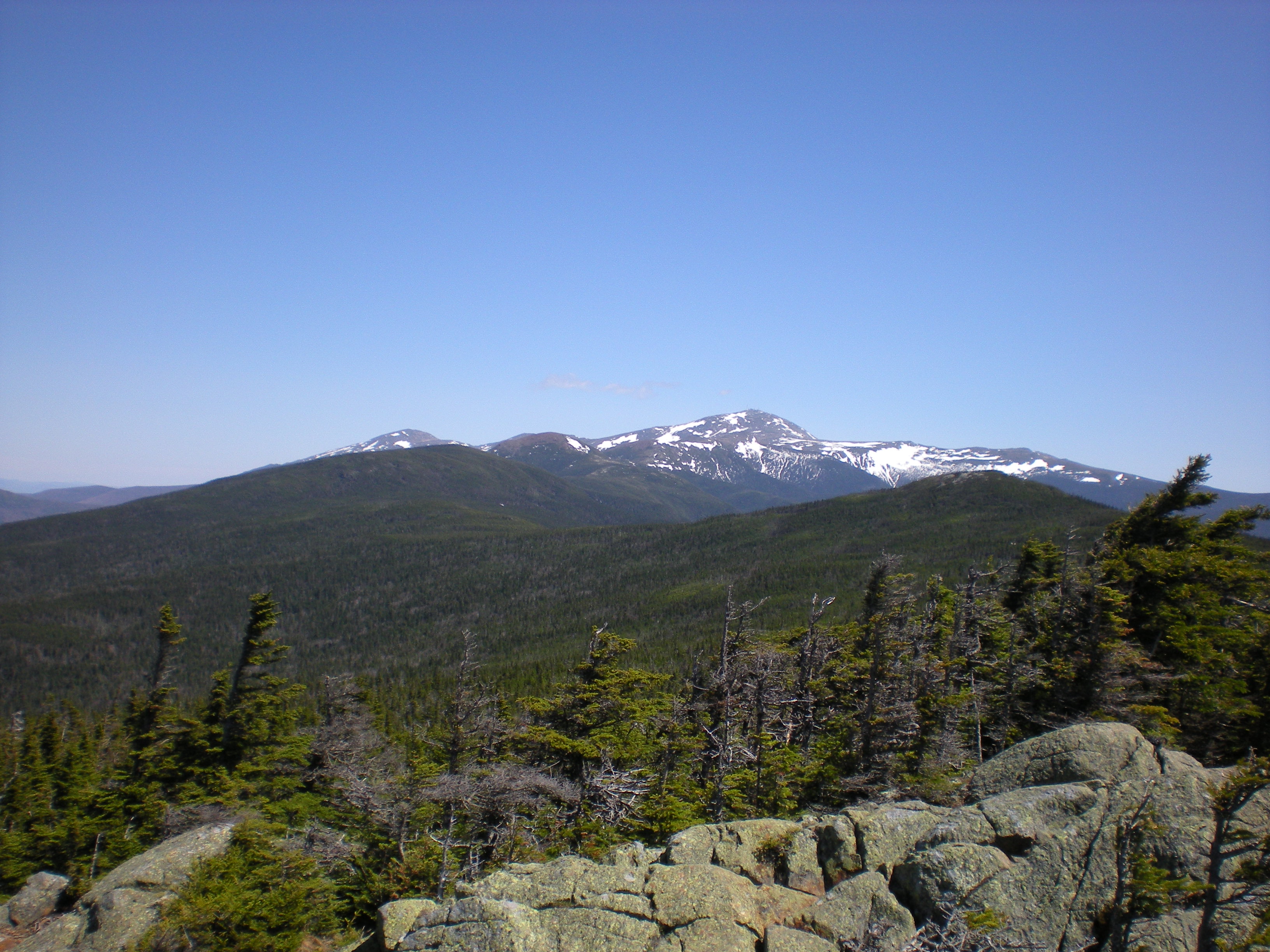 We got to the top of Webster there was no snow (gone as soon as you exit the woods), but the wind was blowing hard (and in the White Mountains hard means HARD). I was disappointed not to see any grey jays to share my granola bars with, maybe there was too much wind for them. Mt. Webster has about 180o views. To the south we had the Saco valley (left). Prominent background features are Mt. Chocorua (down the axis of the valley) and Mt. Carrigan (to the right). To the north we had the southern Presidentials and Mt. Washington, still covered with snow. The little dot in the center of the picture (you may have to blow it up to see it) is Mitzpah Hut on the flank of Mt. Pierce. 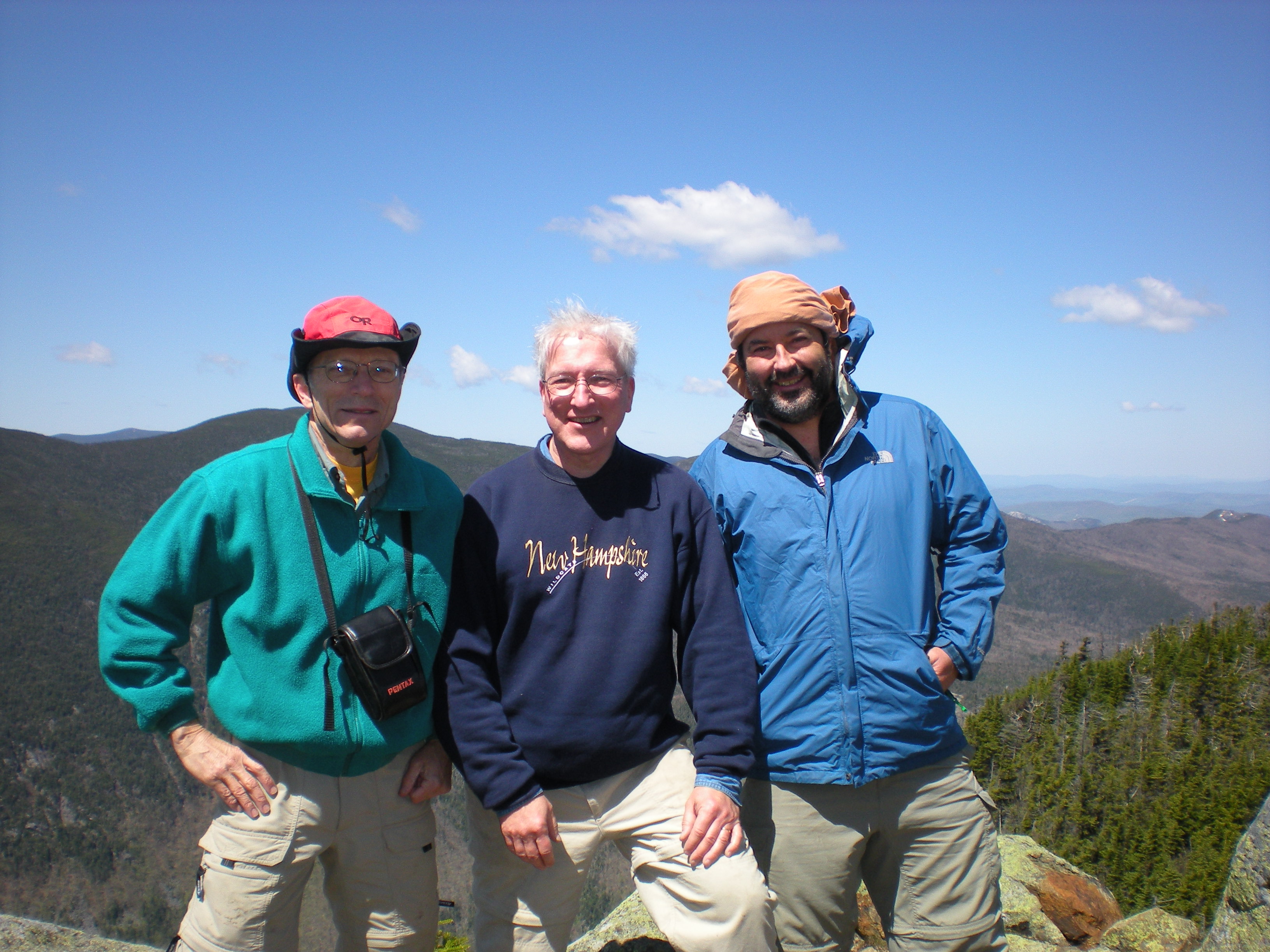 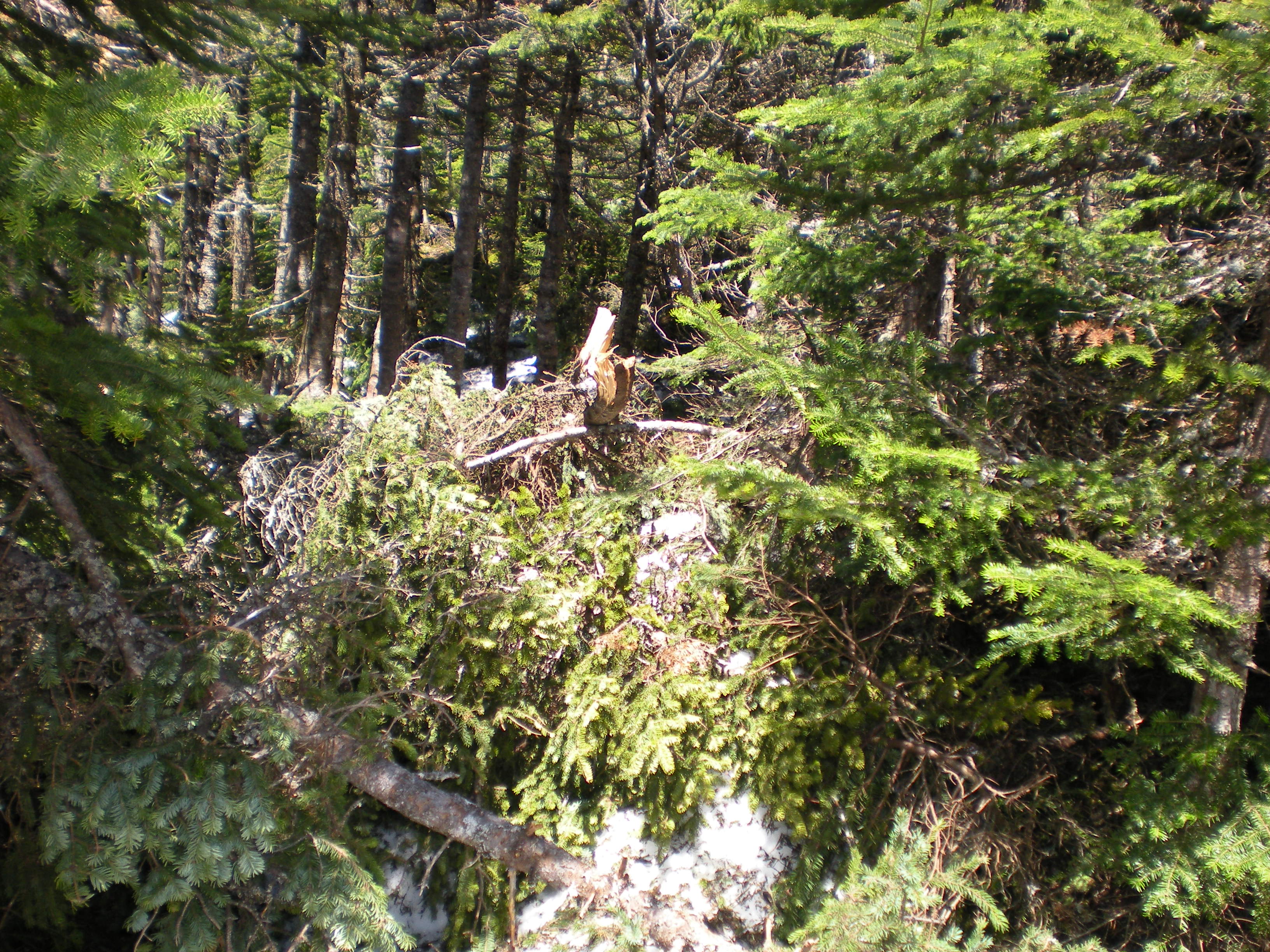 There were a couple of people with us on the top of Mt. Webster so we got our picture taken (left) and from there it was on to Mt. Jackson. What a mess it was. On our August hike last year I had described it as a lovely flat stroll, often on ledge. Ha. This was a snowy mess, with lots of blowdowns. Check out the picture on the right. Where's the trail? Why, it's straight ahead. The trek was part obstacle course, part orienteering in the snow (where the f* is the trail?) 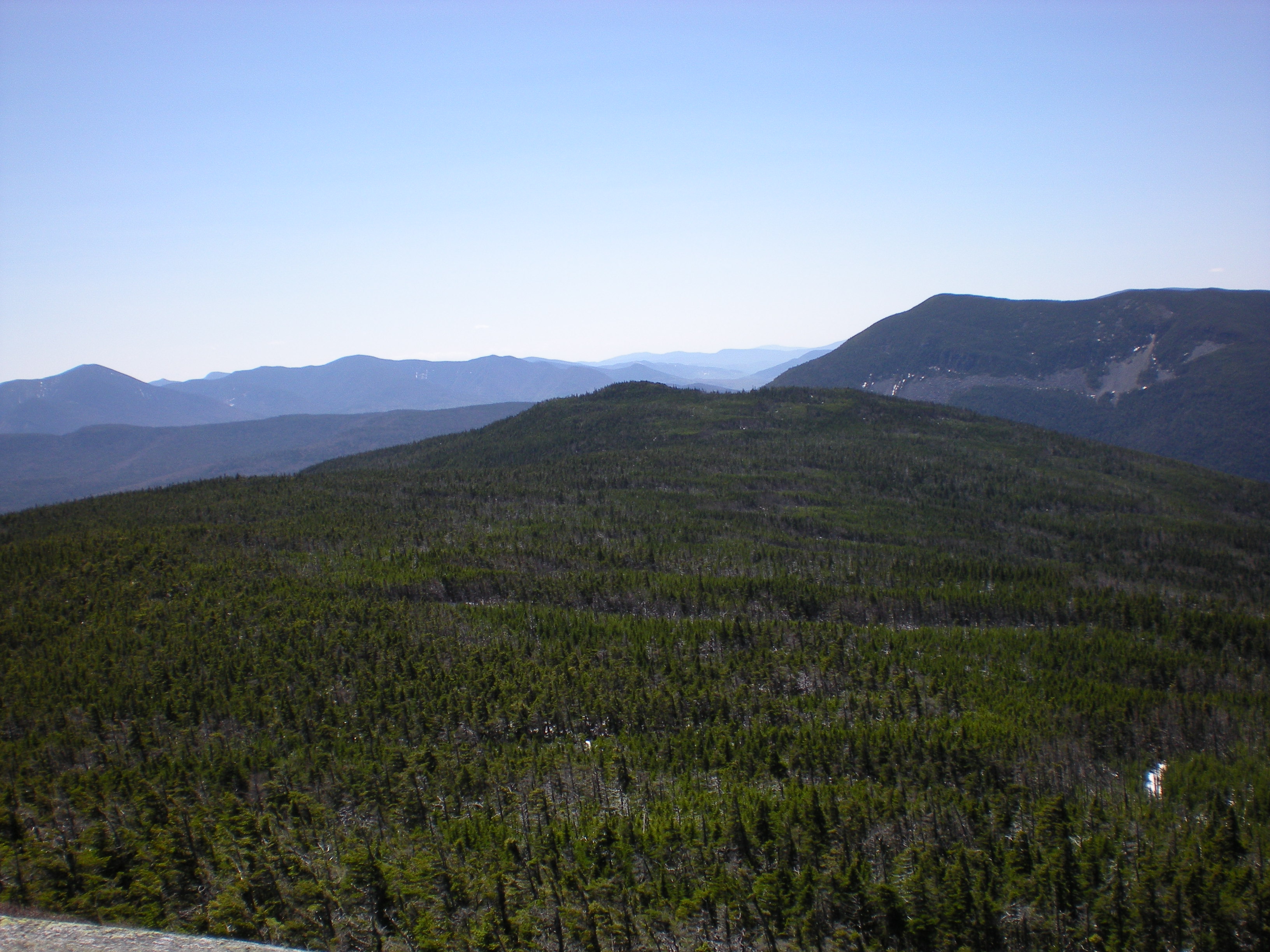 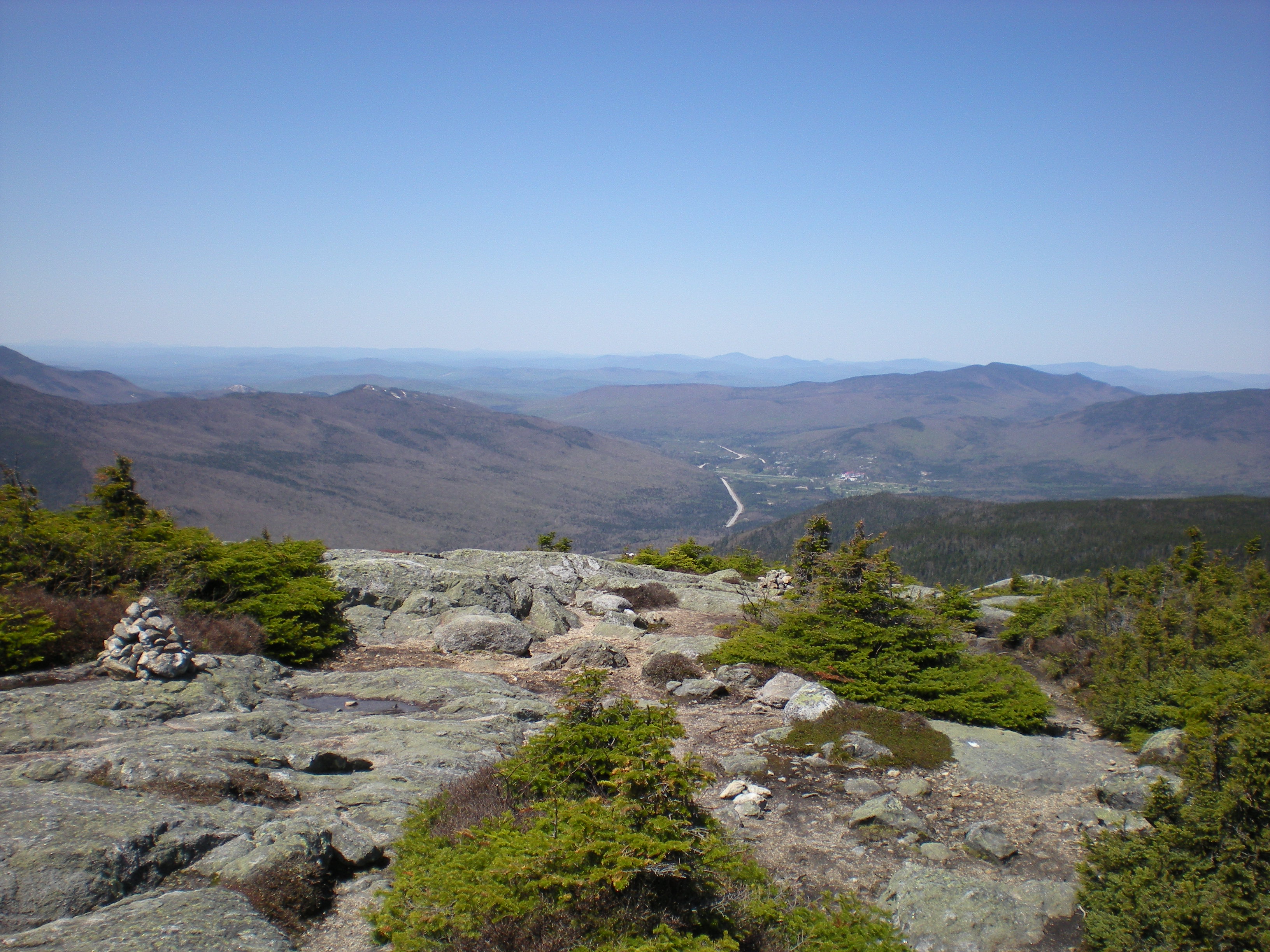 Anyway, we made it to Mt. Jackson and it was beautiful (near 360o views) but the wind was howling! I put on everything I could (three layers, wool hat, gloves). At left is a view looking back to Mt. Webster. I used the video feature of my camera for a panoramic tour from Mt. Jackson. The sound on this video is awful because the wind was so strong, I thought about redoing it in the comfort of my home but it wouldn't be the same. To the right is a view of Bretton Woods from Mt. Jackson, you can still see snow on the ski runs on top of the mountain. After that it was down Mt. Jackson and into the snow, until we got back to the summer-like conditions of the valley!